Magilou: "Guess this is the end of the Velvet World Tour Revengeathon. What an anticlimax. Not that I care either way."

The Revenge-a-thon is still going, Magilou. It's just taking a long commercial break...

Magilou thinks it's over now that Velvet knows how powerful the Shepherd is. She bets Rokurou 10 gald that she's right.

Rokurou takes her up on that bet.

A bright pulse of light shines...

Magilou has her hands up! It looks like she got caught doing something bad.

Lol...Velvet's standing on top of Rokurou... 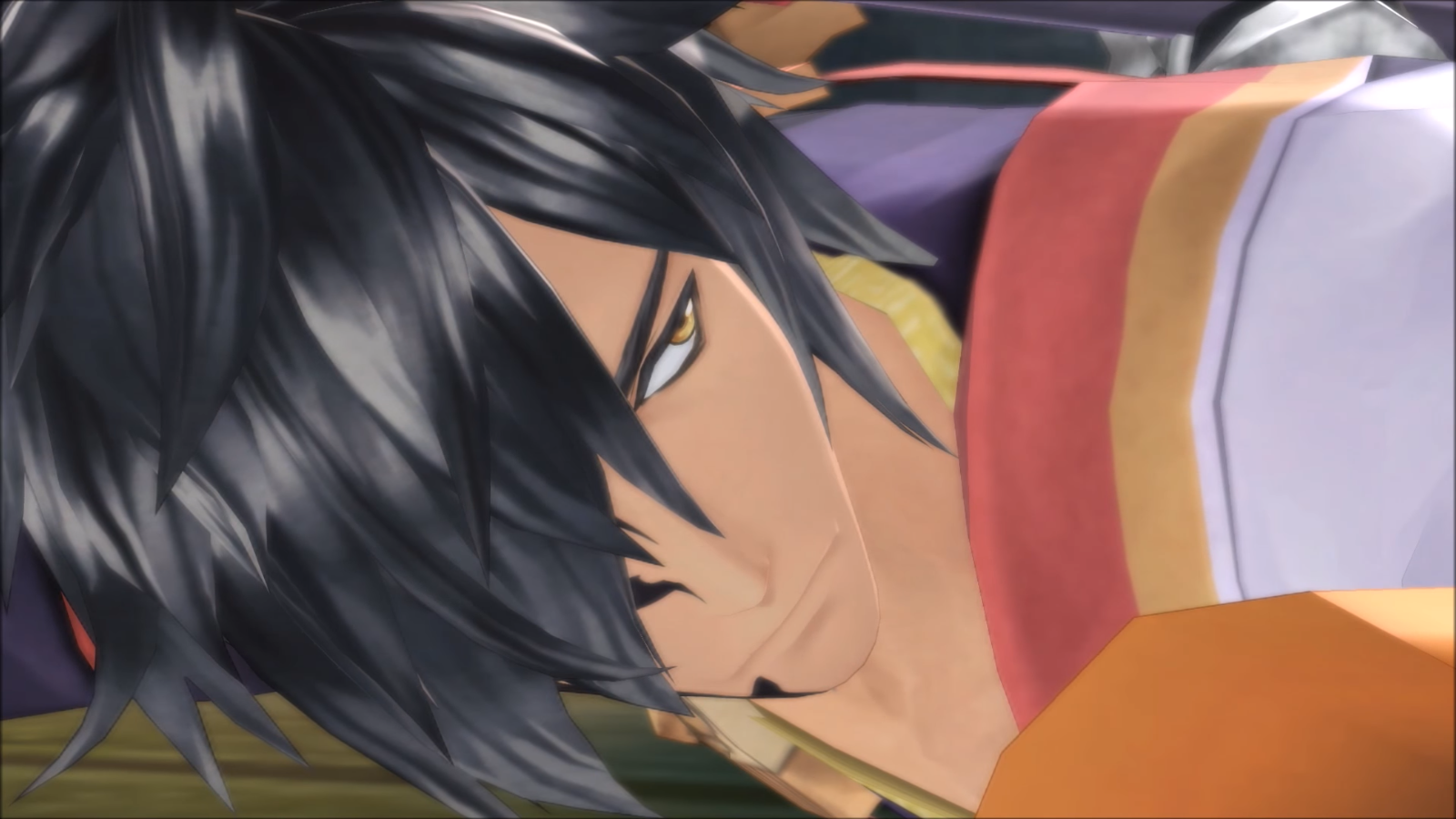 Velvet gets off of him and explains everything that's happened so far.

Eleanor and Laphicet aren't far off then...

Velvet decides to find them!

Magilou: (to Velvet) "Sheesh, are you never not worked up about something?"

Velvet's serious. She then smiles a very gleefully evil smile. 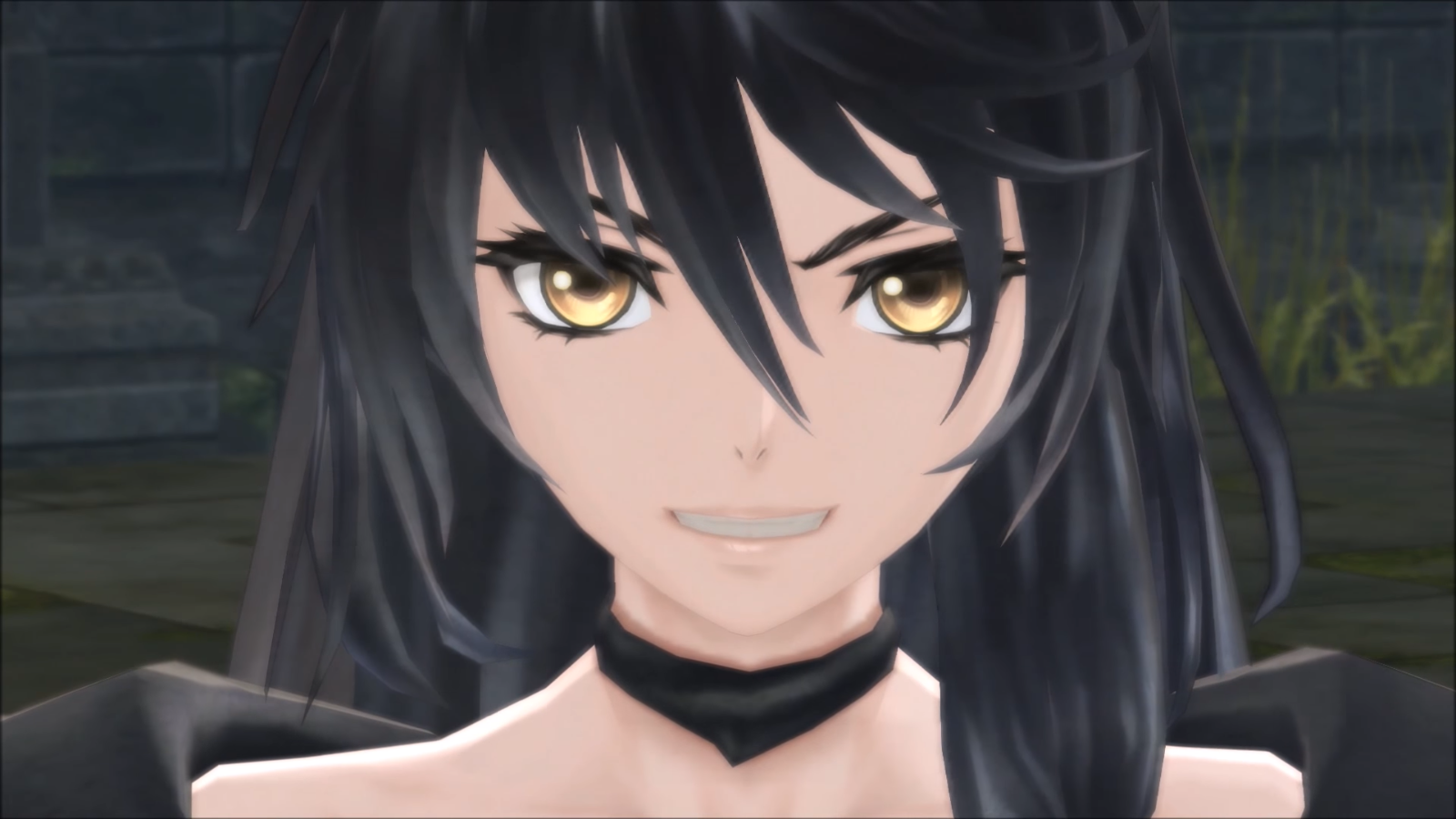 Velvet: "Besides, [Laphicet's] power is just what I need."

I like the way the doors open in this dungeon, it feels Zelda-esque!

More exploring, and I get a Weathered Guardian for Magilou in a gilded chest here!

We climb up more stairs...

The winged skeleton's actually an Undead Magician with a purple cape instead of wings!

Turning a corner, we see a brick wall! A cracked brick wall...

Magilou: "Oh no, a dead end! And so the adventure came to a close in most sudden and unsatisfying manner."

But Velvet and I know the wall's cracked, and Velvet roundhouse kicks the wall out!

On the upper floor, we get the jump on Armored Centipedes!

Skit: Rokurou's still taking in the info about exorcists being malak's vessels. He asks Magilou if she could do that as well. She can.

Looks like this malak's more powerful than the party counted on...

Another skit: Rokurou asks where they are right now. Eizen thinks they're in an "underground temple of Eumacia."

Rokurou asks how the builders knew where an earthpulse was.

Rokurou: "Just wham, there it is?"

Eizen explains that humans can't sense earthpulses in the present time. But, long ago, they had that gift to sense the earthpulses and knew where to build the temples.

Rokurou wonders if the builders found any "rare ores" to make swords with. Jeez, Rokurou...

Eizen's done with Rokurou. Velvet points out that Eizen enjoys talking about ruins and art...she's right.

Turning a corner, we see a Turtlez guy, but we head downstairs...

We avoid the monsters to head to another dead end, where I spy a cracked brick wall northwest.

We found a treasure trove of Katz spirits!

Along with a side helping of Centipedes and Undead Magicians!

Returning, I see another gold chest with a Thorny Waistcoat inside!

We talk to the White Turtlez guy again!

Velvet demands supplies from him.

He asks for "extra" money. Velvet asks how much more.

Magilou smirks, and tells the merchant about a "spooooky monster" that eats merchants. She describes said monster (Velvet) in the scariest detail possible. In the case of Turtlez, this monster starts off with the shell.

The Turtlez gives in quickly.

Velvet tells Magilou to give him "the smile that he lives for." 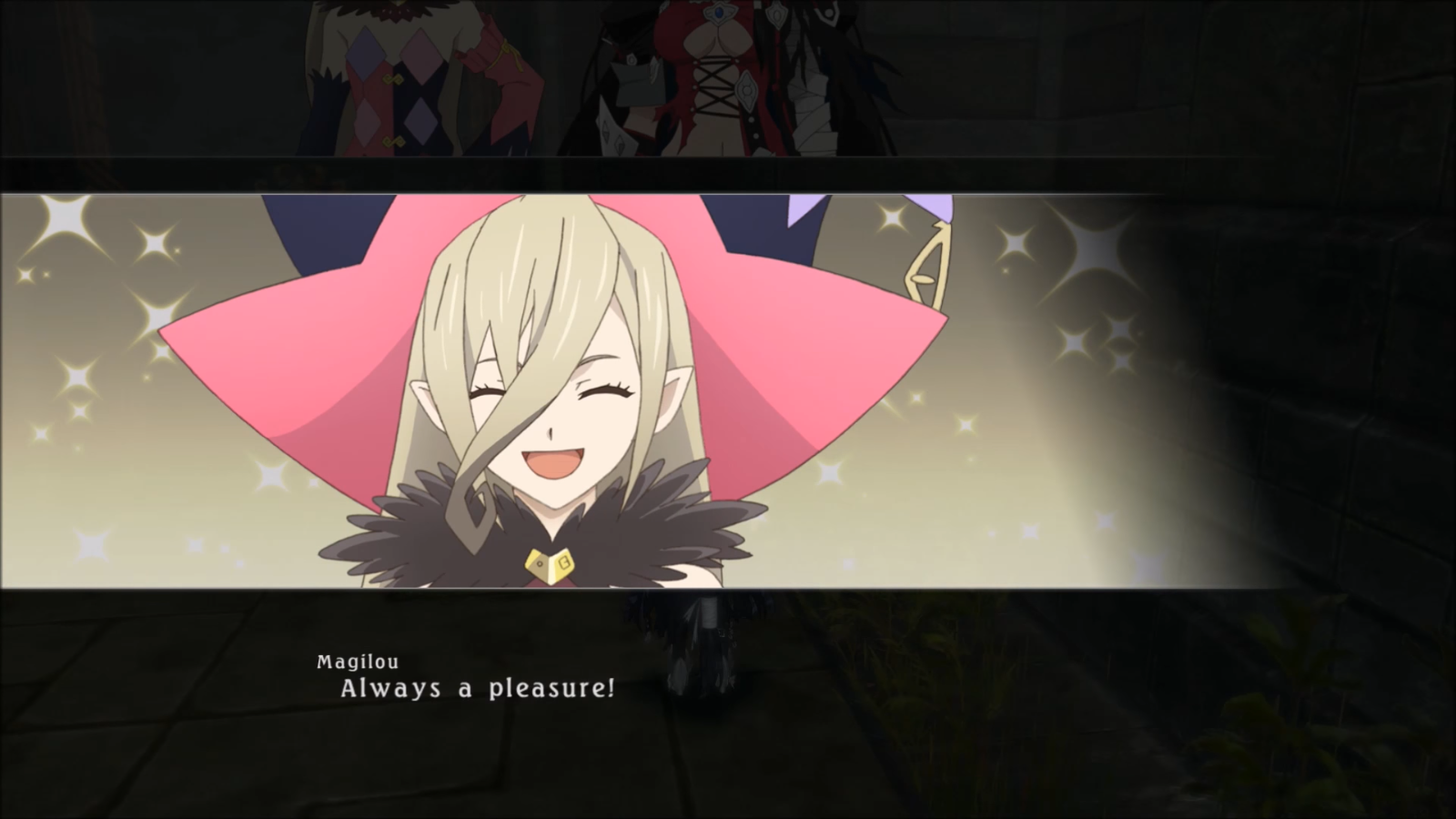 We do business at the Turtlez Shop.

After more weapon customizations, we a get another ventite!

A few more things to do in the shop, and we're off!

I go down the eastern staircase...

Which way, which way?

At the end of our little trek, I find a gold chest with Tarnished Earrings inside!

Heading back up, and taking the west staircase, I see a Katz Box in the other side of the room!

I rescue the Katz there, who gives us a Drop Earring!

We move forward and climb another set of stairs, where I spot another code red daemon!

It seems the Undead Magician has some water spells up their sleeves!

Back down, it looks like I missed a brick wall! And another!

I found the exit!

In one battle, Magilou performs her Mystic Arte: Ascending Angel!

One more flight of stairs, and we're now in the upper floors of the ruins!

Now more stairs and a door...

...we arrive in a large room with a thick column in the middle. No sign of Eleanor or Laphicet.

We're now at the exit, or the entrance, of these ruins...

Tales of Berseria - Part 44b: The Spider Queen

Now to face the code red daemon for this area, the Spider Queen...

She's in a room in the Central Floor of the ruins...

She's weak against wind and fire artes, but strong against non-elemental and earth arts...

She shoots a web at Velvet, but lucky she missed!

She uses her web artes to stick Velvet into place and unleash her attacks!

Thanks to the Spider Queen's Spider Net, Velvet's movement speeds slowed down to a crawl...

After healing her from the slow movement, I take care of the code red daemon some more before I let loose Velvet's Mystic Arte!

Looking at the daemon's stats, the Spider Queen also knows a variety of spells like Gravity Well!

And thanks to that spell, Velvet's out of the picture!

But Magilou finishes the job!

We win an Aspirant's Ignicite!

Now that that's over and done with, I save before the ruin entrance!