Expedition check: We get some Fake Food, or a model of prepped food...

The temple's infested with daemons, no, monster malakhim!

Rokurou's questioning why the Shepherd would want his Abbey HQ somewhere isolated instead of in the capital.

Laphicet looks around. He senses something. Eizen does too. They both sense "powerful energy flowing underground."

Eizen explains they're in a "focal point of the earthpulse," or, where the "source of natural energy" lies. I'm guessing this is why the Shepherd wanted to build the temple here.

Meanwhile, the Shepherd's praying, or meditating before Innominat's throne. 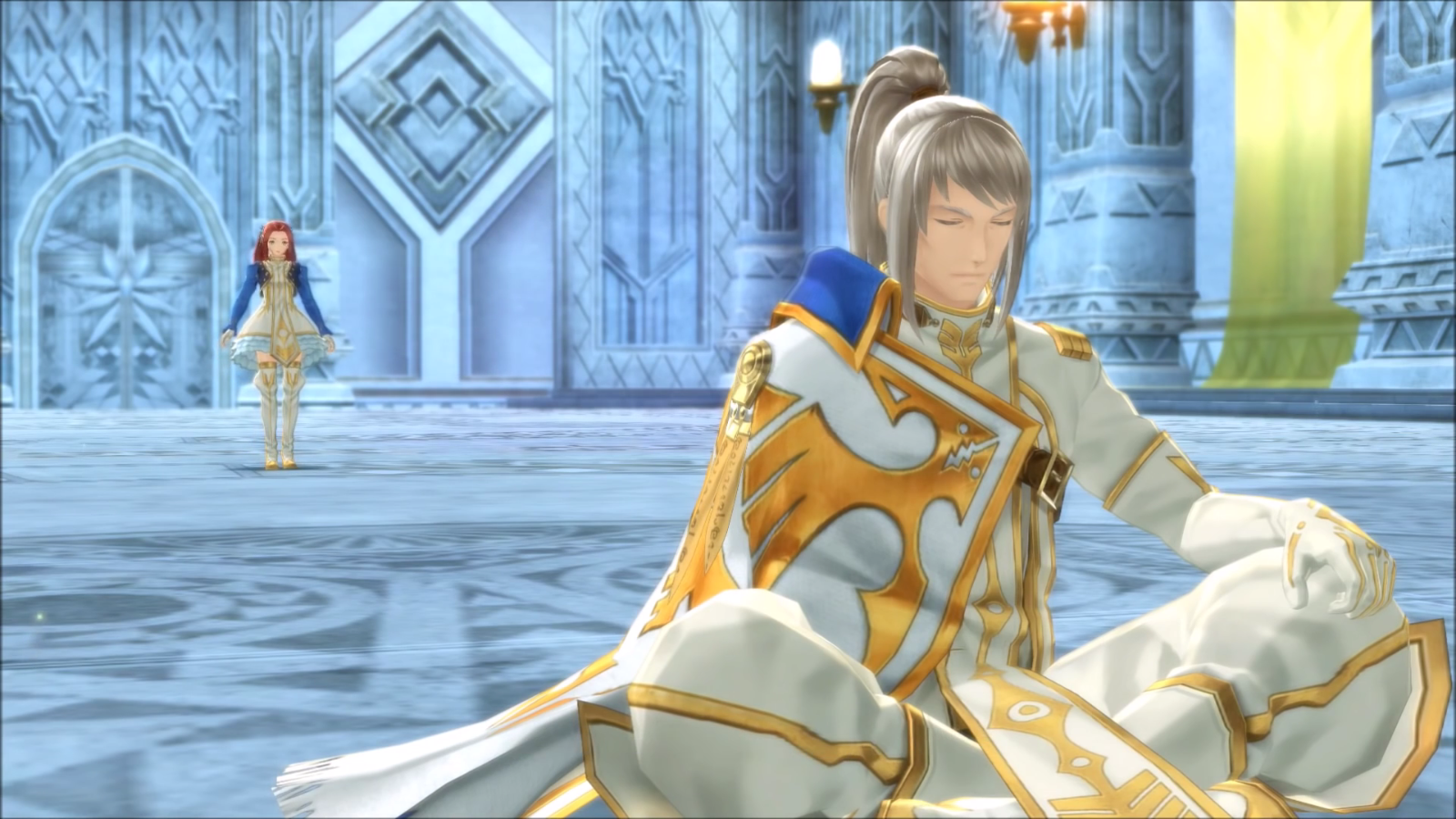 Eleanor enters the room, about to tell him what happened at the Loegres villa.

This feels like a scene from Return of the Jedi, except everyone's clothed in purity instead of gloomy darkness.

The Shepherd asks Eleanor where her malakhim are. Uh oh.

Eleanor's shocked that he knows her.

Shepherd: "You are overcome with emotion. Will you fight a daemon with your hatred?"

Eleanor backs away, asking for forgiveness.

Shepherd: "She broke even the resolve of even an exemplary disciple like you."

Eleanor now asks about the griffin in the villa.

The Shepherd tells her only legates are allowed to enter the griffin daemon's lair.

The Shepherd now asks the same question he asked Velvet in the start of the game: "Why is it you think that birds fly?"

Eleanor answers wrong. To "hunt and catch prey" is not the answer.

He dismisses her, stating to Eleanor "that knowledge is not for you."

The seal above the throne glows white.

Shepherd: "So Velvet is coming. The ties that bind us must at last be severed."

Laphicet mentions Zaveid's weapon. Rokurou also states Eizen was looking for someone who had that.

Laphicet sensed no ill will in him either. So does Rokurou.

Velvet's going to fight him if they ever run into him again. Bienfu notes "that's what a killer looks like."

There's a huge barrier in front of the temple. How am I going to break that?

I head to a small platform where an intricate-looking key is floating. I check the key, which sinks into the platform, opening our way through!

We fight one of the giant white and gold boars, which are armored Varahas! Easy win!

I get more pointers on the Burn status after figting Primal Pythons!

This temple is very colossal...

Climbing up a ladder...we face off more monsters for XP, and the new one here's a Delusory Rodent!

After getting what's in the nearby silver chest, I jump down! What a long drop!

After a few battles, I head to the center of the temple, where a save point is!

More scavenging, and I climb up to the east wing of the temple to a large patch of land...

I open a chest behind a boulder, and head around the structure. I see another chest from afar...along with another security switch under a structure of columns.

But I face another Primal Python, and realize that even my allies can also switch places too, noticing Eizen's in the fray now unleashing his Mystic Arte!

There's a lot of Tales Coins spread around the temple grounds...

We make it to the second security key. I disable the system here.

The barrier at the top of the temple's now gone, or at least, one part of it...

We lower the ladder on the eastern end...

I take whatever's in the silver chest and jump down to the garden below.

I'm sorry for stating the obvious, but this temple is really colossal.

After checking the map, I'll need to disable the western key as well.

I climb the ladder back up to the western structure.

After another battle, we pull down the second ladder, and head for the key.

The last barrier's out!

The way to the throne is open!

Magilou "prays" they don't turn the security back on again. Velvet don't need prayer though.

We jump off the western structure and dash to the save point.

We climb the first set of huge stairs, and scavenge for more items. I'm nervous now...

There's a lot of materials scattered around the second set of stairs...

Heading to the east end, I open another gold chest where a new weapon: a Shell Shredder is!

I switch leader back to Velvet, and stop here.