But the guard stops Velvet and asks her for their papers, or an Abbey travel permit, to be exact.

She calls her troupe "Magilou's Menagerie." As proof, she tells Velvet to do a "magic trick with doves." Velvet forgot how.

Velvet does a very bad impersonation of a dove, "coo..coo." Lol...poor her...

Magilou showers doves and confetti! Holy heck, she is a magician!

The guard tells her to move along, no advertisements.

Laphicet's amazed at her tricks. Velvet's not happy. She calls their defenses "pathetic." No, the inspections, according to Magilou, are proof of their "confidence."

So there's two whole fleets of guards and a thousand exorcists...oh my god...

Meanwhile, Rokurou and Magilou point out the grandness of the ceremony, indicating the peace brought by the Abbey. But, it came at a price...

The second expedition's finished. It's a success, and I'm reading through the dialogue between Velvet and Rokurou over the treasure the scout ship found: a pendant.

Velvet doesn't think of it as valuable. But Rokurou...oh my god, he's digging himself deeper in his dialogue to Velvet...

I save at the main square, before a fleet of soldiers in formation.

My lord, the villa looks grandiose...

Here's the music for Loegres.

Now we explore around the city, looking for more info.

Rokurou asks an old man, a big devotee of the Abbey, about the Abbey's structure. Eizen explains.

Eizen: "The Abbey is part of Midgand's Church of the Empyreans. Originally, it was an order of paladins and warrior priests devoted to exorcising evil." So the Abbey, or the Exorcist's Abbey of the Church of Midgand, existed long before the Advent, huh?

Rokurou doesn't see them as a humble organization, even though they're a notable branch of the church nowadays. All because of that man.

So the high priest gave all his power to that man. Plus, the prince of Midgand, according to Laphicet, gave him full military and government powers, and now, that man controls all of Midgand. Wow. So he probably used Velvet and sacrificed her brother for this power.

The delivery of Rokurou's last line here sort of made me laugh a bit: "Okay, got it. The Abbey's a big deal."

We speak to another citizen, who admires the prince. The Prince of Midgand is Prince Percival. Where's the king?

The king's retired and the prince is in charge of running Midgand.

Eizen: "He declared that a new way of thinking was needed to save the world from this crisis." My god. So the prince is working hand in hand with that man too.

Velvet: "...So all of Midgand is on Artorius's side." He's got plenty of good publicity.

We speak to her again. She mentions the prince and that man being single. She asks if that man had "a special someone." Velvet responds that "he threw it all away." Does that mean that man sacrificed Celica too?

There's guards drilling for a parade for the ceremony too...

There's a girl sitting on a bench with her mother who's excited about the exorcists and the Prince speaking. She wants to thank that man. Mom agrees.

Magilou: "[The exorcists] sure are popular."
Velvet: “Because these people don't know the truth.”

Magilou also brings up another truth. In a serious voice, she says the exorcists are fighting daemons because ordinary people can't. Hence why they're grateful to them. Velvet sulks.

The girl on the bench hates being selfish. Mom laughs, all this to keep them safe.

Wow, the influence of Midgand's Church is wide...

One man says the parade is but a "show of force to [him]." It definitely is a power play to the citizens. The bold man even doubts that some joined the Abbey out of "virtue and goodness."

We go to another weapon shop, which has been around for a century...

There's a merchant talking to a priest about church improvements by giving him a loan from his guild...

Other observers are watching the practice drills with awe in their eyes.

We now climb the steps up to the castle plaza.

There's a choir chanting "Midgand!" Magilou points out the royalty has the citizenry wrapped around their finger.

The crown prince of the Midgand Empire, Percival Asgard, speaks.

But the ceremony's officially begun. And I'm playing this part on the same day the Winter Olympics are having theirs.

Prince mentions the awful tragedies of daemons and daemonblight.

Velvet runs up the steps. No! Not now!

The prince mentioned how much Artorius sacrificed everything. Velvet points out the truth in her head.

Prince: "He called Lord Innominat, one of the Five Empyreans, and blessed us with the strength of malakhim."

Velvet climbs the wall, but slips...

Prince: "He serves as a shining beacon of Reason in this world of turmoil. And Reason is what binds us."
Velvet: (thinking) "But you killed him! You took everything that I loved!"

Prince: "So raise your voices in praise to Artorius's devoted work, to the savior who purifies evil and guides our flock! Let us call him our Shepherd!" Wow...

So Artorius is given the role that Fberl (ciphered name) eventually takes on in Zestiria...

The crowd praises him as "Shepherd Artorius."

Now another cutscene where we see the prince.

Oh my god! Here he comes in glorious white and gold, the new Shepherd, Artorius Collbrande!

Artorius: "Even though the world was filled with suffering I had to ask something tremendous of you all. I entrusted you to endure the pains of Reason. I asked you to bind yourselves with shackles of your own will!"

There's Oscar, and Teresa, and an elderly priest in between them...

Artorius: "For the only blade that can expel calamity...is one forged from unshaking reason...and the iron will to do what must be done!"

He does look and sound like a fancier Lhev-meets-Inabaqbes (ciphered names to prevent spoilers from other Tales games) with holy garb here.

He raises his fist.

Artorius: "And now, that blade stands ready...before all of us today! I offer my body and my life in service to the people of this great land! With the blessings of the Empyrean Innominat, I will guide you to a world without calamity! And this world's suffering...will be nothing but a distant memory!"

Rokurou lowers her down...

Velvet: "You're the one who killed Laphicet!"

Aside: With this post, it seems that I've reached 3,000 comments!

Back at the alley, the gang huddles.

Velvet says she "needs a sword of reason and will" to stop him. Malak!Laphicet's in shock...

Magilou: "May your days be fruitful and your nights tormented!" Good riddance.

Rokurou says they should play it slow since that man's out in the open.

The bearded old priest in between Oscar and Teresa is Melchior, according to Eizen.

Eizen suggests scouting for info. Rokurou agrees. Velvet asks if Eizen has connections in the city. Not much, but Aifread's close to a shadow guild...

So we have to go to Baskerville's tavern next.

Skit: Rokurou points out the full might of the army seeing that man's position as Shepherd.

Eizen asks about Rokurou's target. He's not there. His "target" doesn't go out into ceremonies since he doesn't care about the rank of being an exorcist, or rather, the ceremonial part of it, I'm guessing.

Rokurou notices that man's right arm was injured. Velvet confirms that he got injured with that arm. But, he's still dangerous with his left. Rokurou has good insight. He even mentions that man's "chi" located "below his navel." Laphicet asks about that too. Rokurou points out that even when he looks relaxed, he's always on guard.

My god, it was his insight that made me peg Rokurou as a traitor at first, but it wasn't because he had extra info. He's just that good at analyzing things.

Rokurou's devoted to taking on the Shepherd as well, with a daring grin on his face. 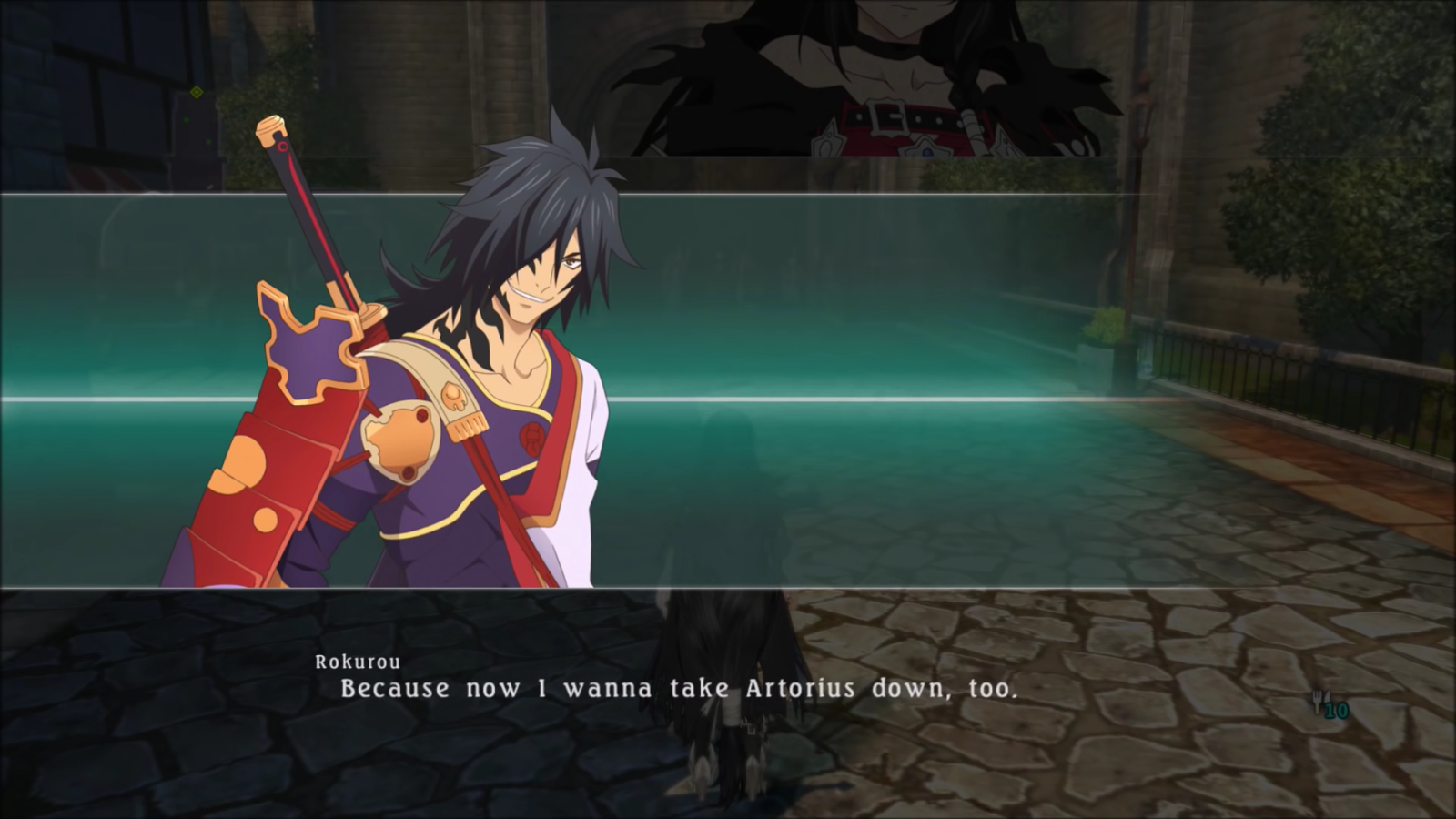 One noble's questioning a local soldier how much power they're going to give that man in a fortnight. Even I'm concerned too. The soldier says the usual "it's necessary" line, even though some soldiers aren't okay with it.

Someone's reporting to an exorcist that the Gate's fallen...

People are now talking about Artorius's speech, mentioning "the sword of will and reason" line.

Looks like the Church of Midgand's gaining more followers and the devoted are getting more devoted...

The area to the east is now open.

A devotee of the Church is in awe at the new label royalty's given that man, thinking that with him, the Era of Disaster will end...

Velvet: "Shepherd Artorius?"
Rokurou: "How pompous can you get?"

Eizen points out that that man has full control of both the "religious and secular power in Midgand," and has "become the very hope of the masses."

Rokurou: "A dangerous opponent indeed." Understatement of the century.

Laphicet asks Velvet if she's still going to fight him. Her answer is a brusque yes.

Velvet: "He could be a god for all I care. I'll have my vengeance, no matter what."

Everyone's singing praises of that man and the speech that he made.

We head to the cathedral.

We overhear a family lauding the Shepherd. The woman there's moved to tears at the short speech. The son's devoted to helping the Abbey. The girl wants to marry that man when she grows up. If only she knew the truth about him...

Now everyone's more focused on "order" and "will."

One of the nobles mentions Oscar as a praetor. He doesn't have any good labels to put on him, thinking the Dragonias were doing this just to get him close to the Shepherd. Velvet notices this too. So the Dragonias are a rich family...

Some of the clergy's not happy with the power that man's gotten...

I go in the Cathedral. That grand holy music plays again...

One in the front pew's praying to the Empyrean, and would gladly give money every month.

Rokurou's impressed by the cathedral. So's Laphicet. Eizen notes that malak didn't build this chapel, but the current engineering and tech at the time did. Eizen goes on to praise the architecture of the place.

No actual Empyreans are in the cathedral, but it's a symbolic gesture, Eizen says. The cathedral's a symbol "to celebrate the continent's unification."

Velvet calls it what it is: "A show of power." Yep.

And the cathedral's not finished! It's sort of in the same situation as the Sagrada Familia...

Rokurou's shocked by how long it'll take for the cathedral to be finished. Centuries... Velvet's next response takes the cake.

Velvet: "The daemon and the reaper are shaking their heads at this overwrought monstrosity. Intrinsic worth: zero." Damn.

We talk to more people, and a priest who demands penance and prayer after seeing Velvet's wardrobe. Velvet is not happy. Oh my goodness, this priest... *smh*

Velvet starts confessing her sins. All of them.

She starts with what she did in Titania, Hellawes, and finally, Vortigern. The priest is sweating, saying she should turn herself in to the Abbey.

Velvet gets honest, and says that she's going after Artorius.

The priest calls for an exorcist! Velvet knew that would happen.