As I'm getting ready for my last session before I go into hiatus, I'd like to thank everyone who's been following my liveblogs so far!

Back to that Grecliff, where I think I noticed another tunnel in... but it's only a dead end.

This bird enemy is super quick! 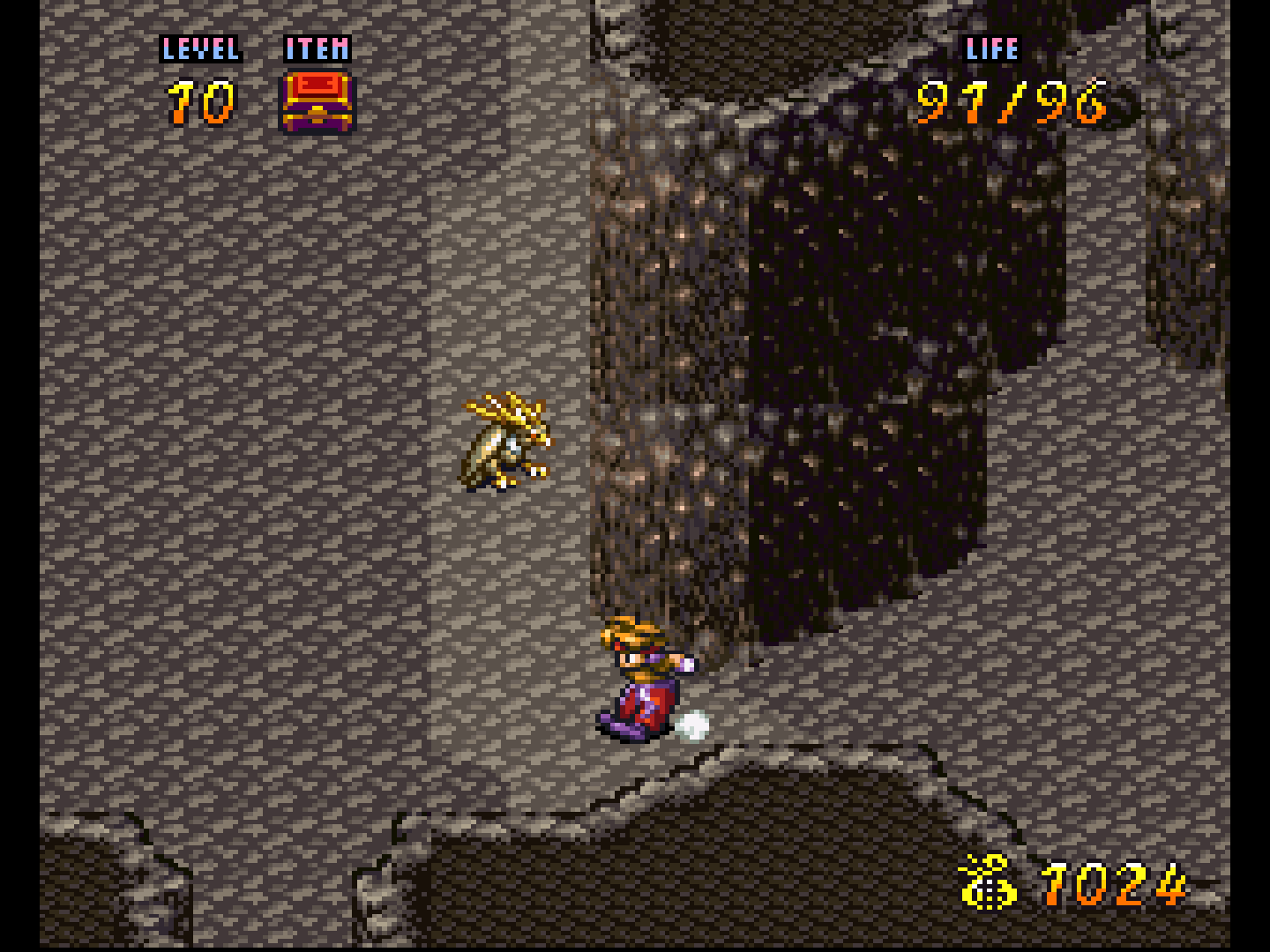 Now outside at the second floor of the cliff, I try to find other passages I haven't reached last time...

I get the drop on the Quaker this time by having Ark make a diving charge at another stone creature before he lands!

Climbing up to another floor now. After a few failed attempts, we make a leaping charge past the chasm! 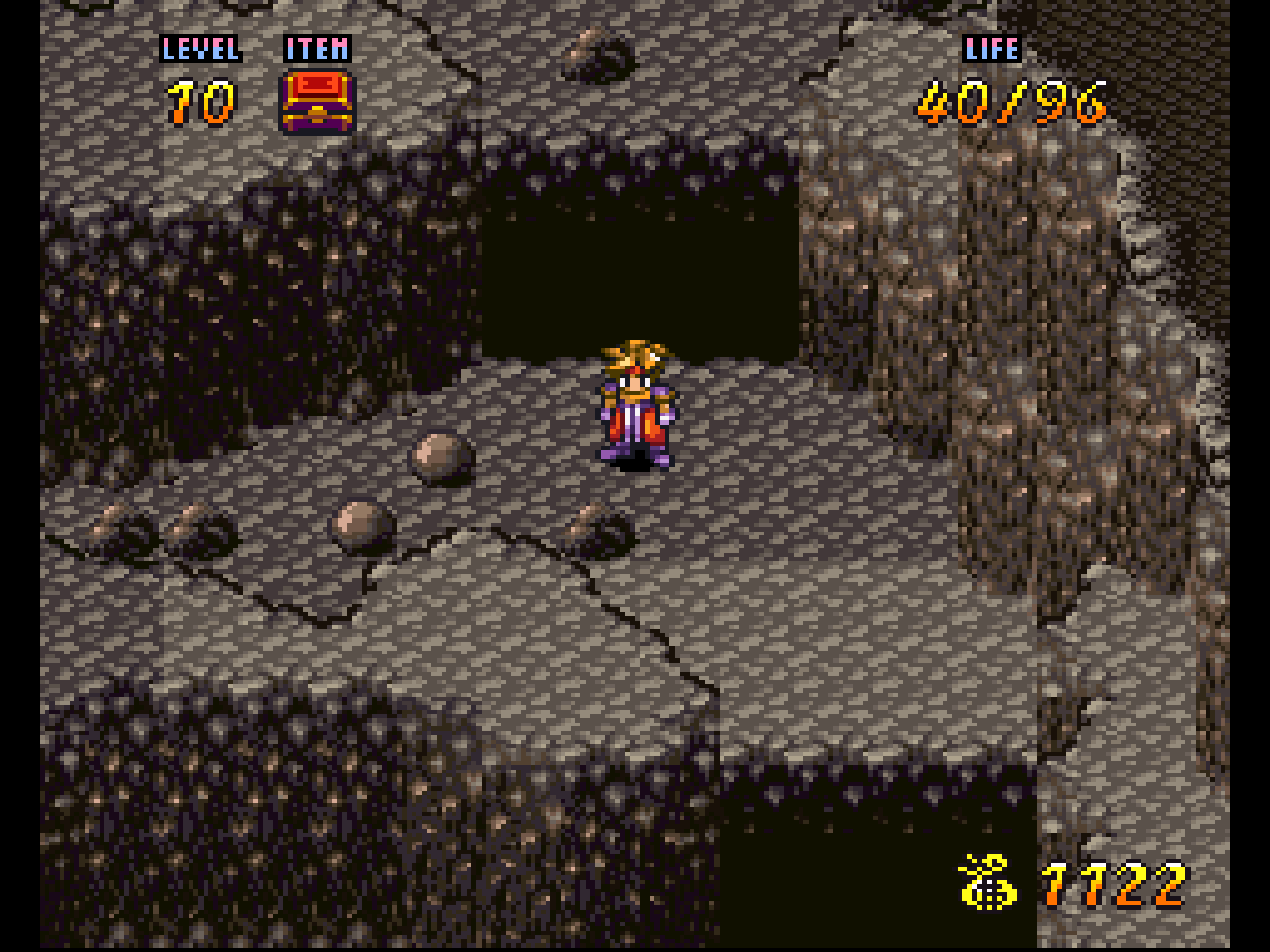 After another diving charge past another chasm, we finally make it! I celebrate a bit by having Ark swim at the watering hole here. 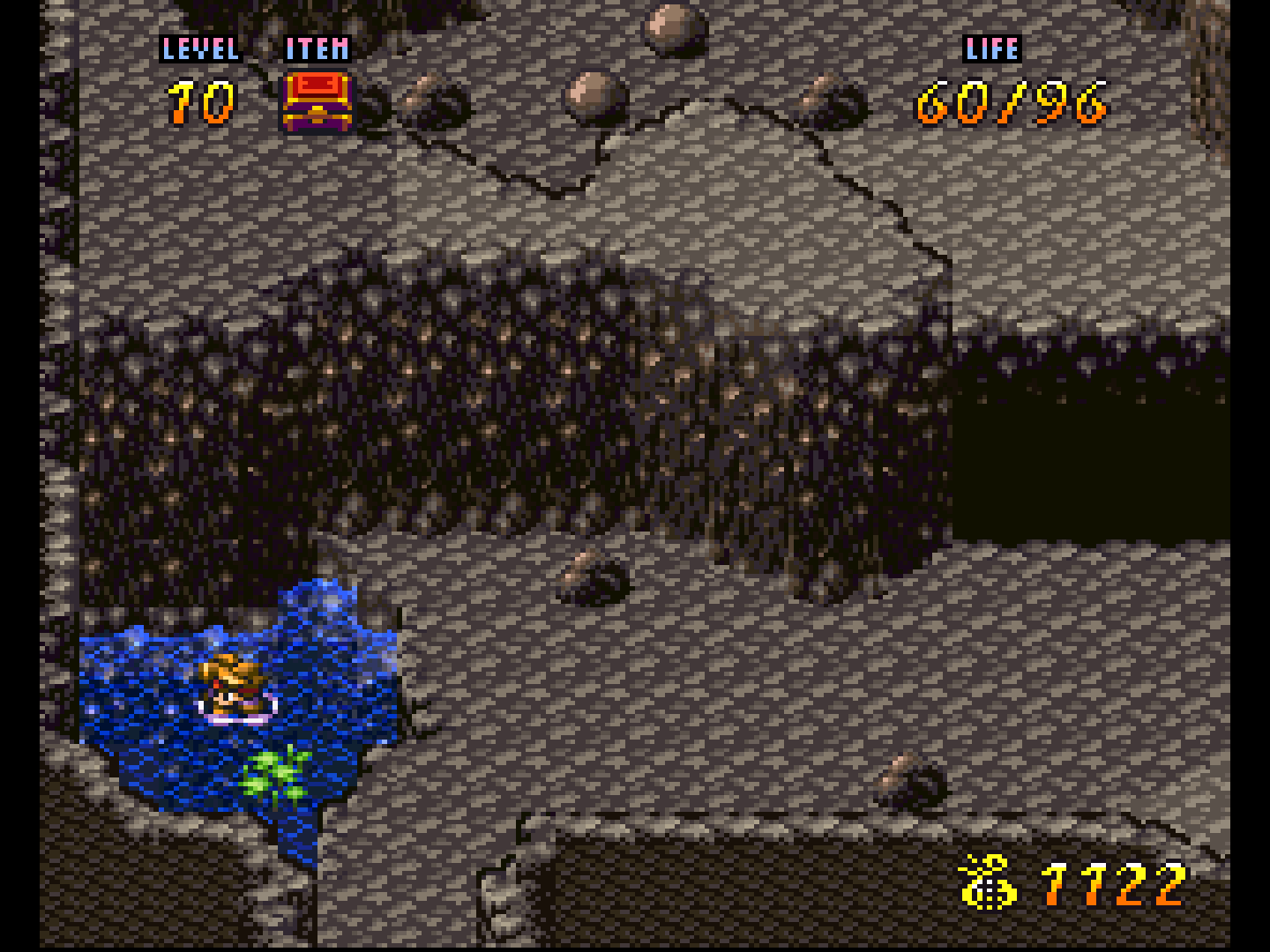 Outside, there's another chest on the west side of the cliff, but the gap is too wide for us to reach.

Miraculously, no mudmen appear, and we find another Magirock at the north end of the cliff. 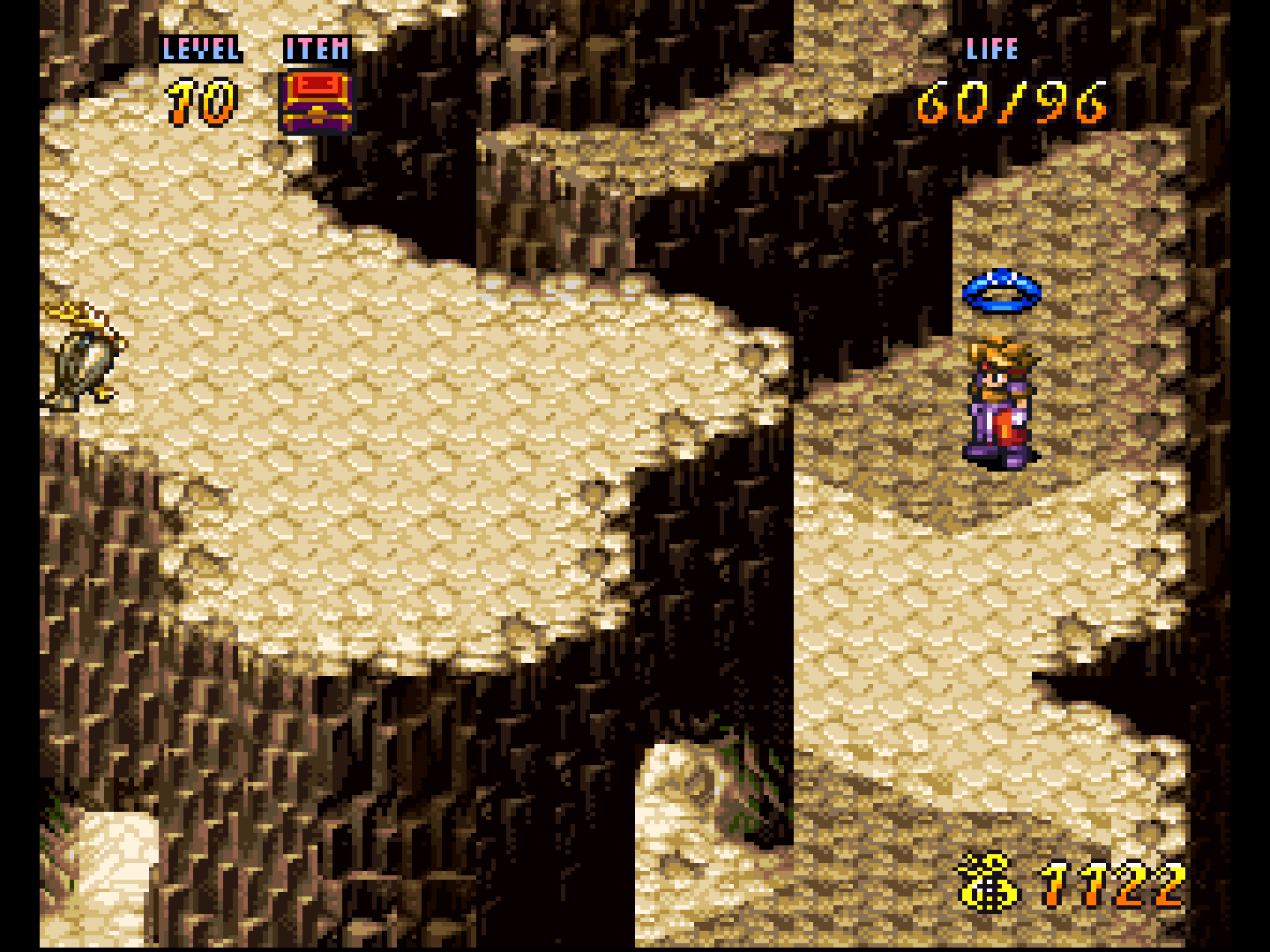 Inside the tunnel south and west from there, we come across more boulders blocking our path... 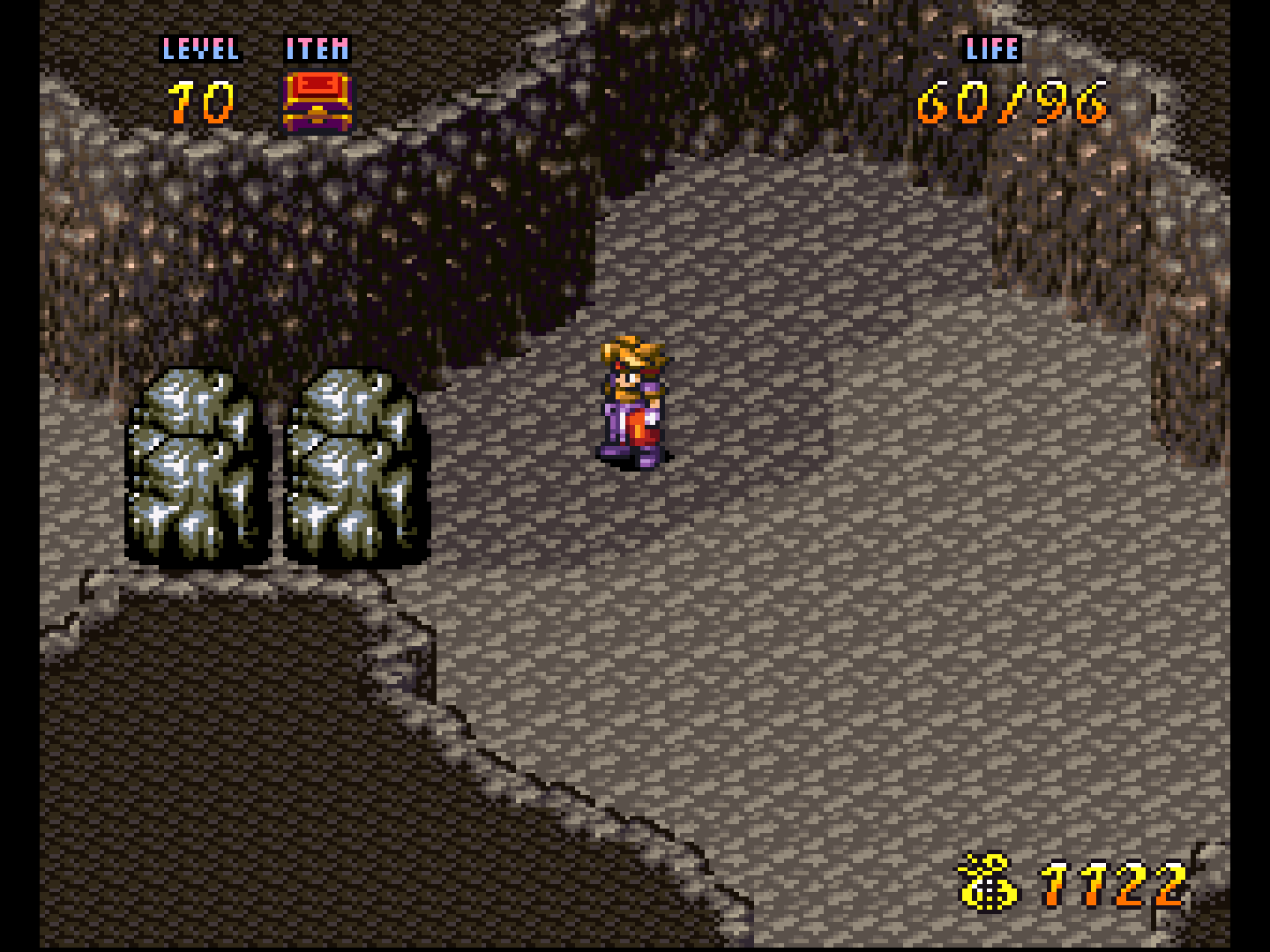 Not a problem, as Ark destroys them easily with the new spear!

Past another flight of steps down, we're back outside, where a mudman and more swoopers wait for us.

As we leap up the short cliffs, we take care of one swooper bird with a diving save. 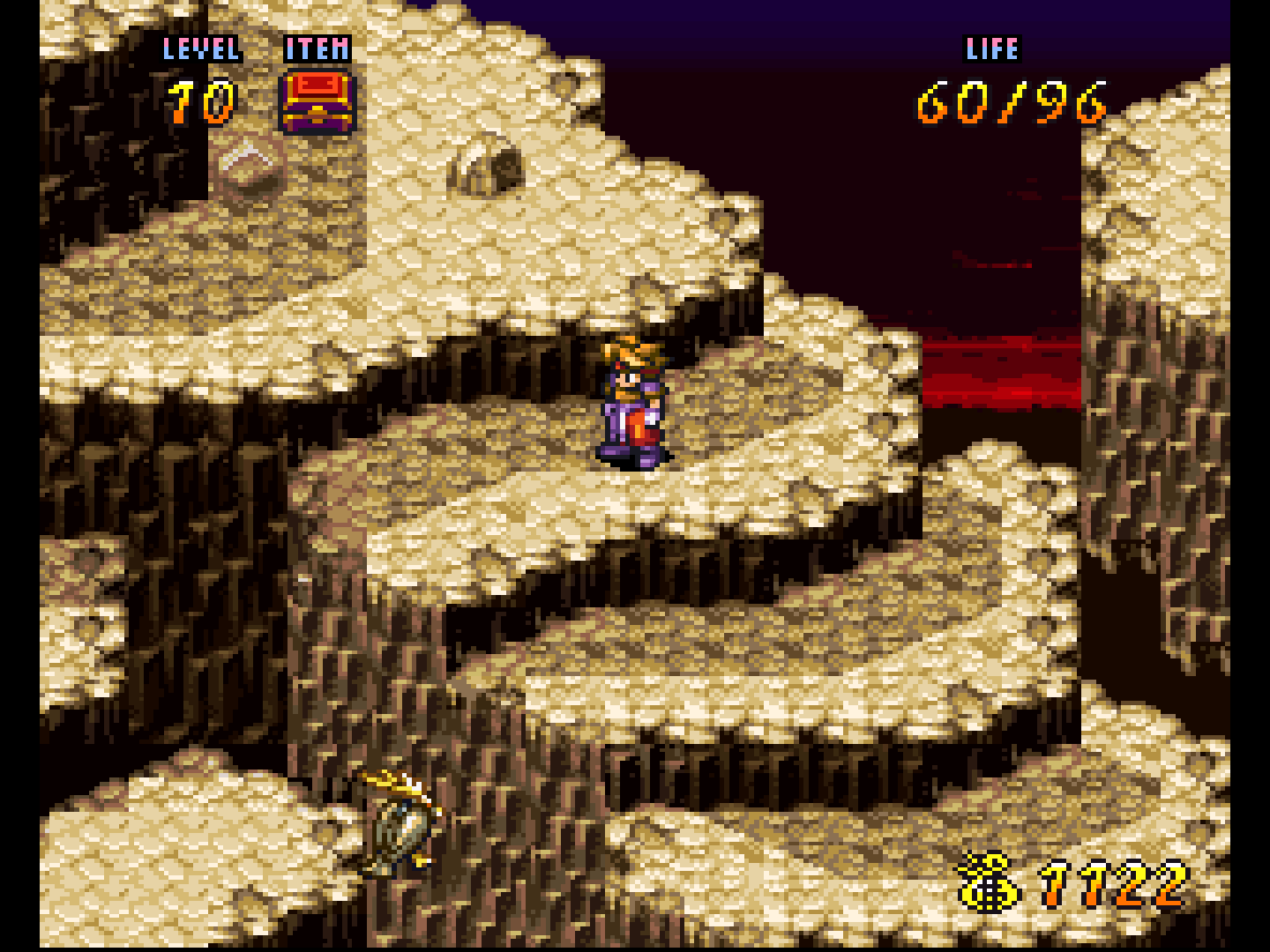 In the next area, and I notice these small men there. Are they friend or foe? 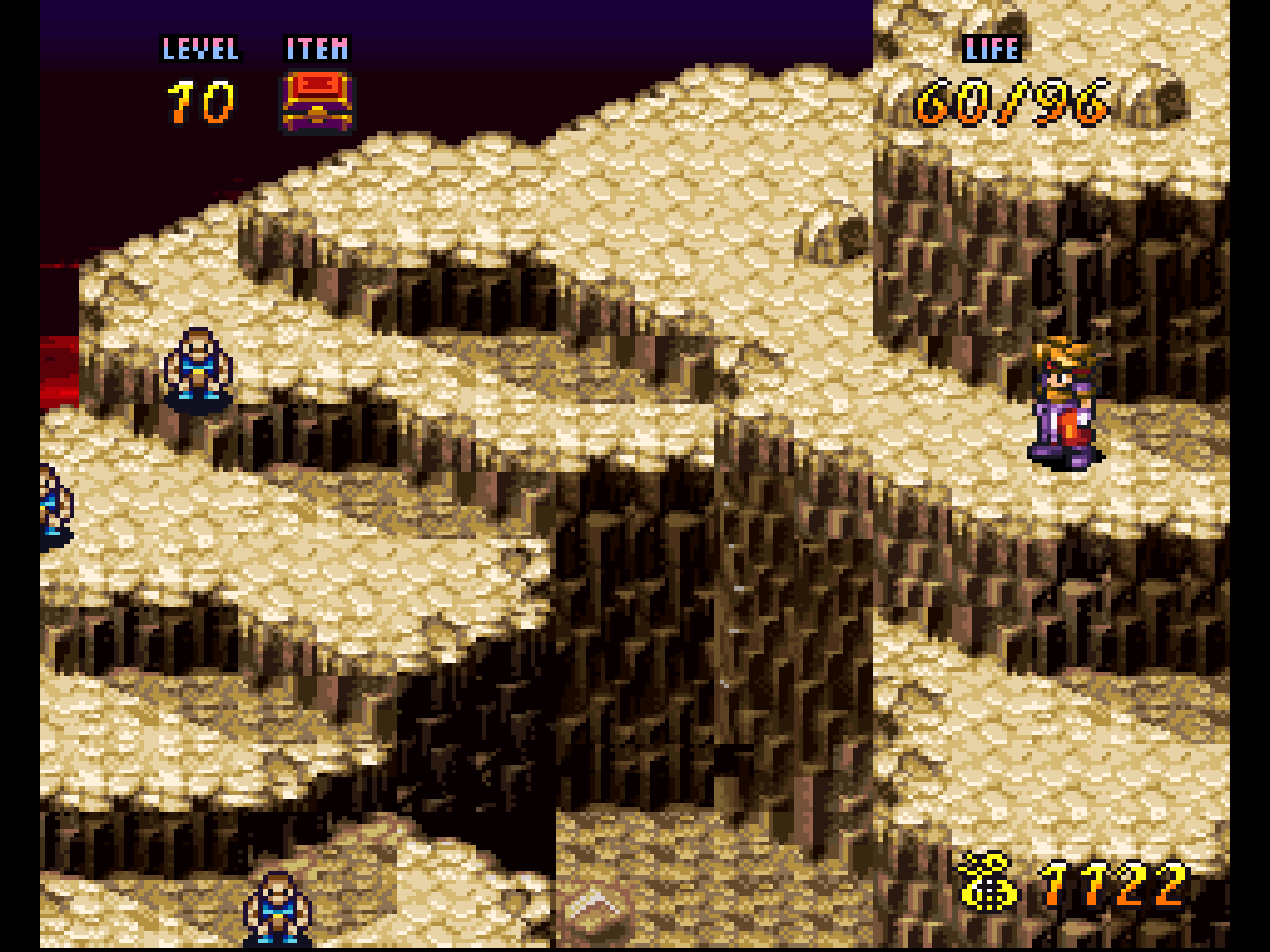 It looks like they're foes, as they start performing martial arts and rolling at us!

There are now two sets of vines for us to climb, and I take the southernmost set, leading us to another set of Magirock. But, it's guarded by a mudman.

We pass him, and go east, which is a dead end.

We go back up and take the vines going inside a hole. The vines though, are very short.

We fall a long way down! 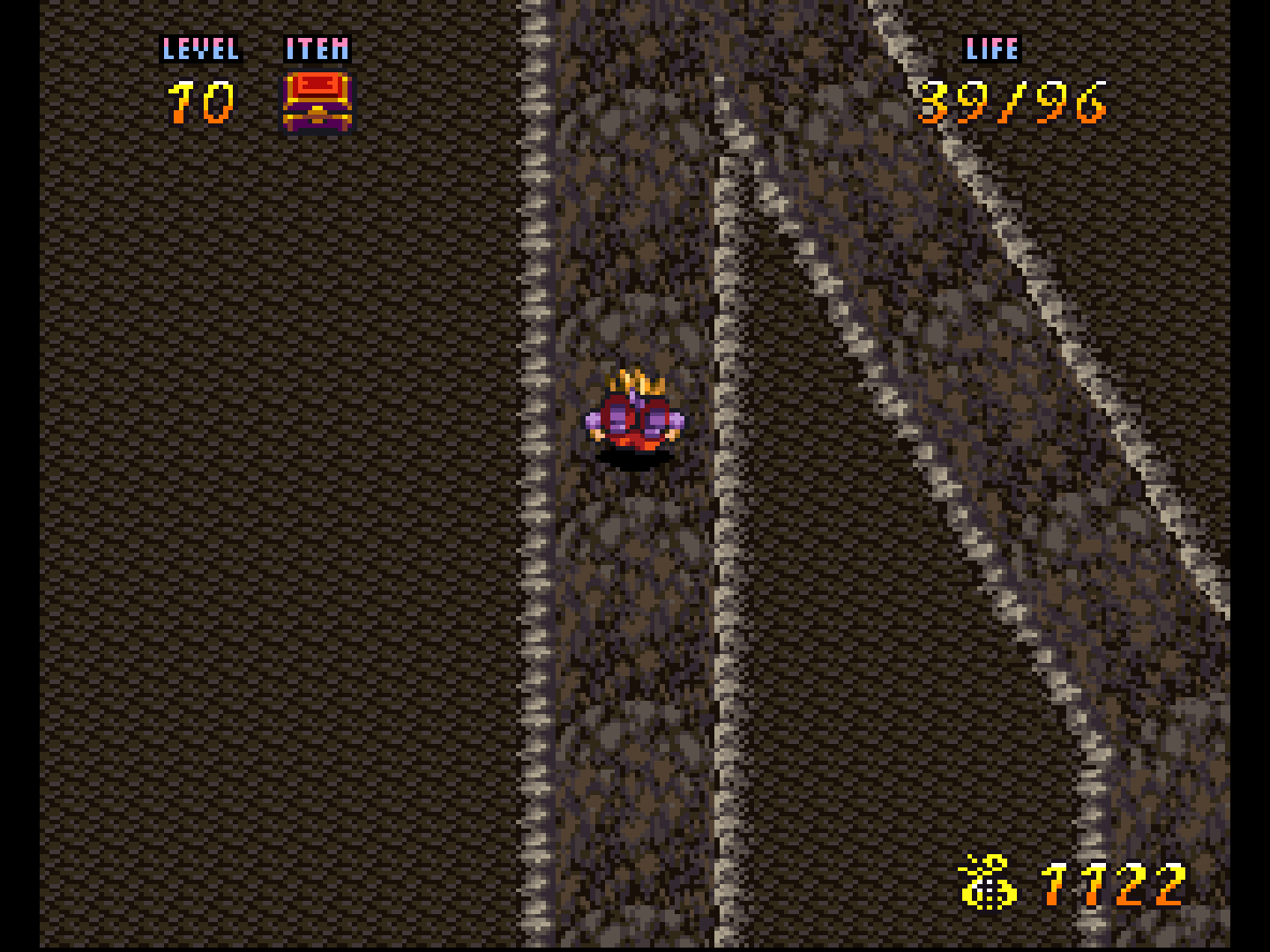 And we're back outside, at the place where we found a Magirock.

We climb back up again. 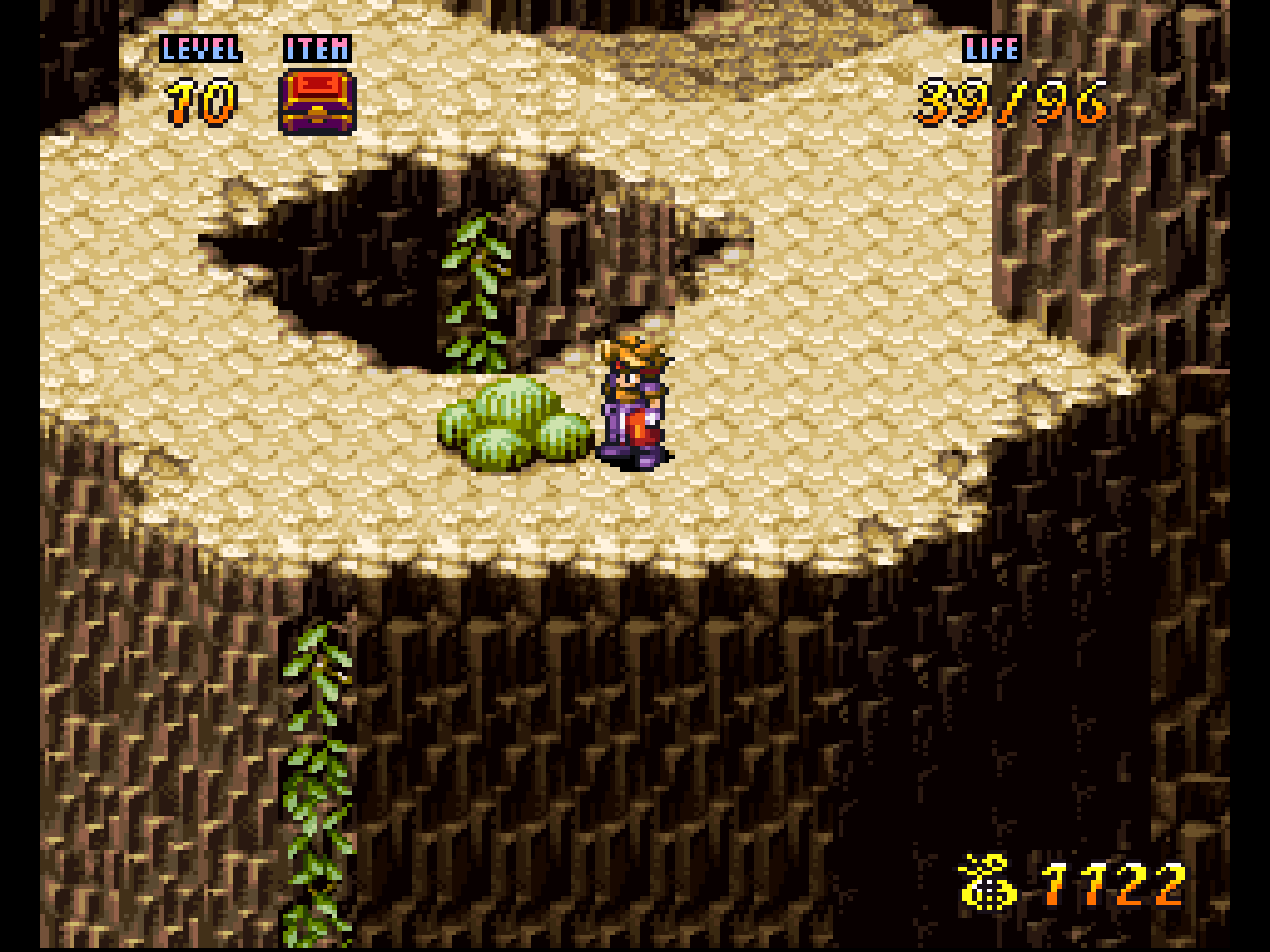 Falling in, I steer Ark in a fork going to the left... 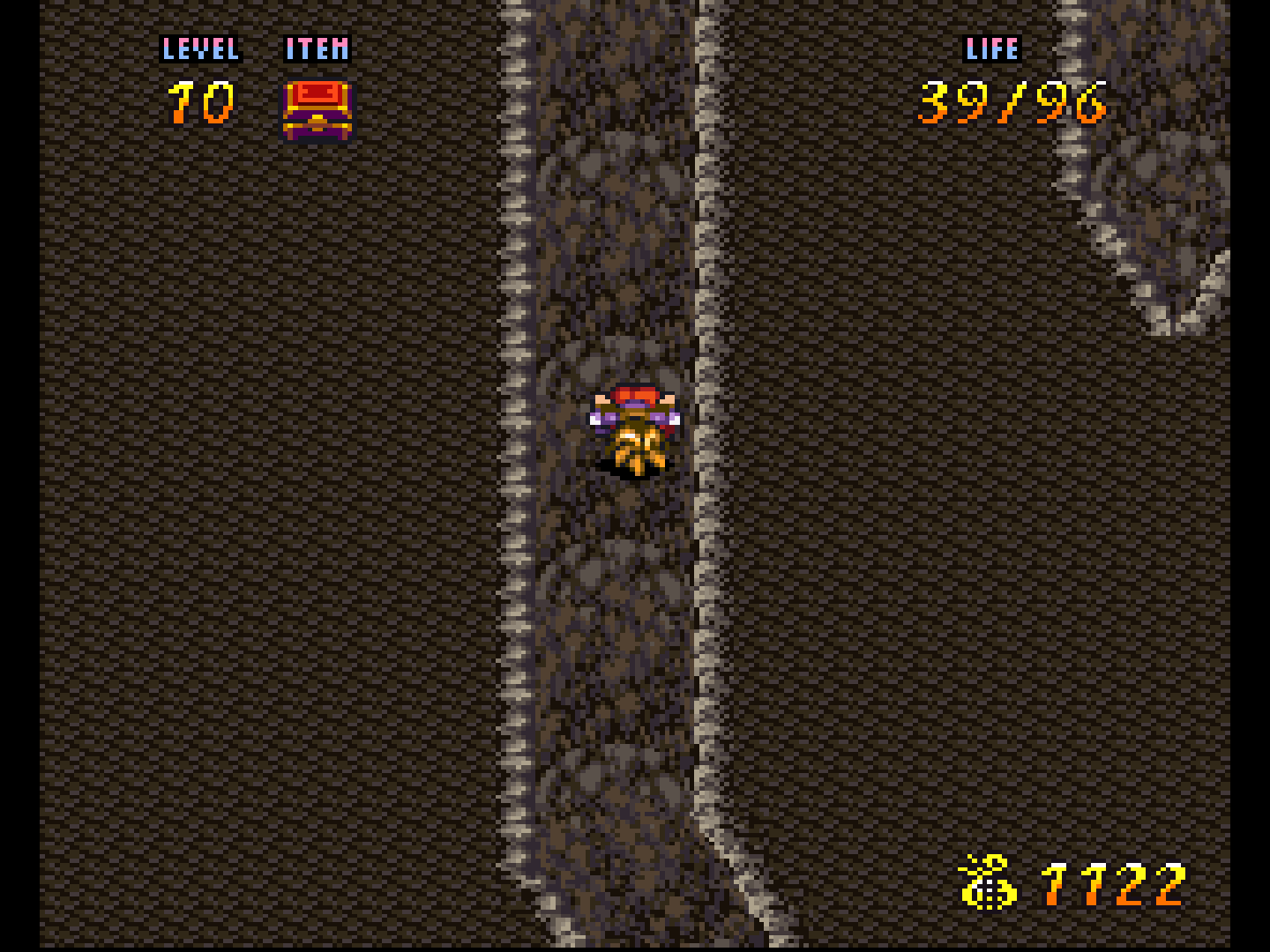 ...and we end up at the unreachable chest! 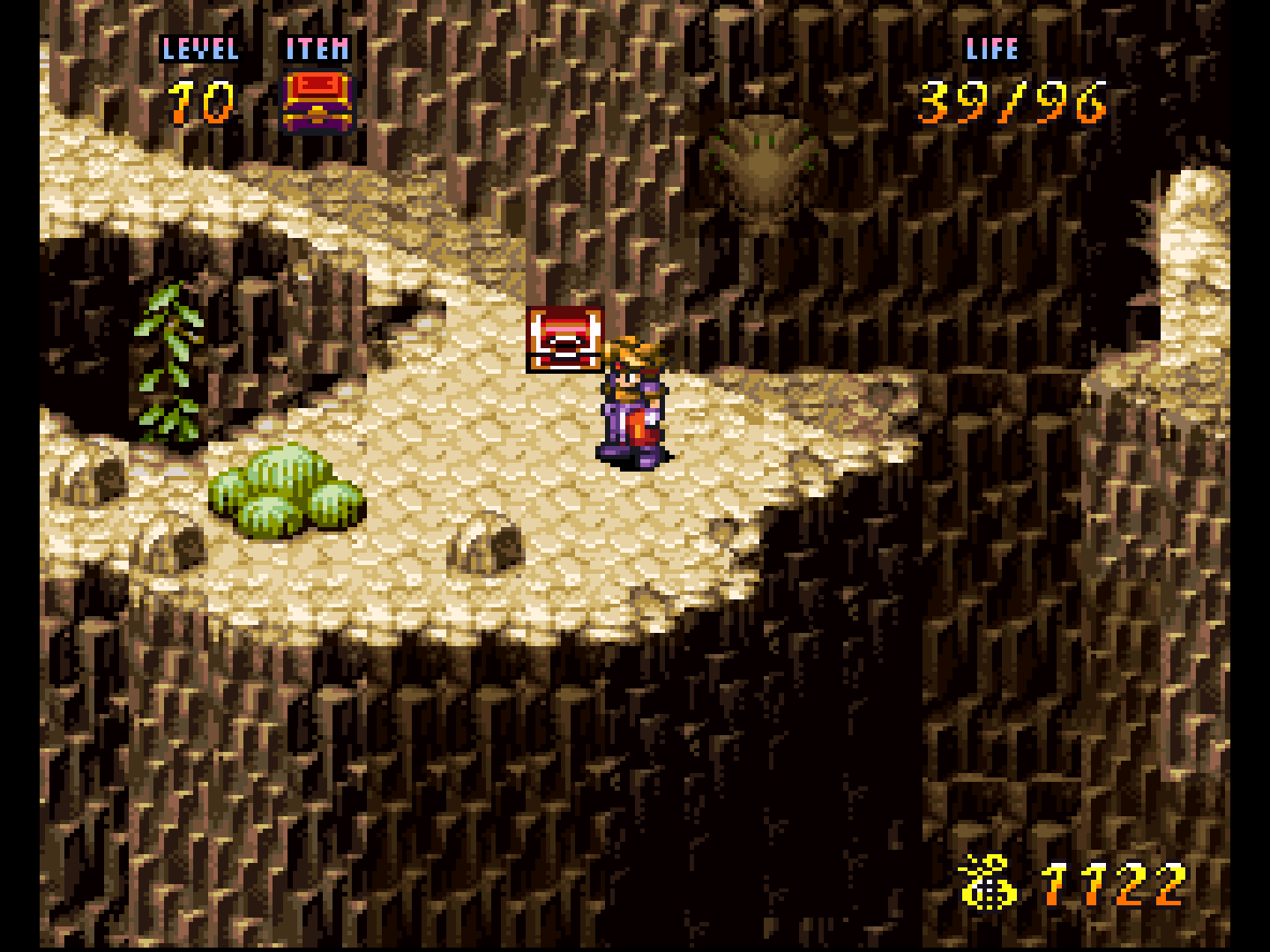 We climb the set of vines west of the chest, tumbling us down to another undiscovered part of the cliffs. The place is infested with more living mud puddles!

East is a dead end, and west leads us to a bridge over to the next cliff. 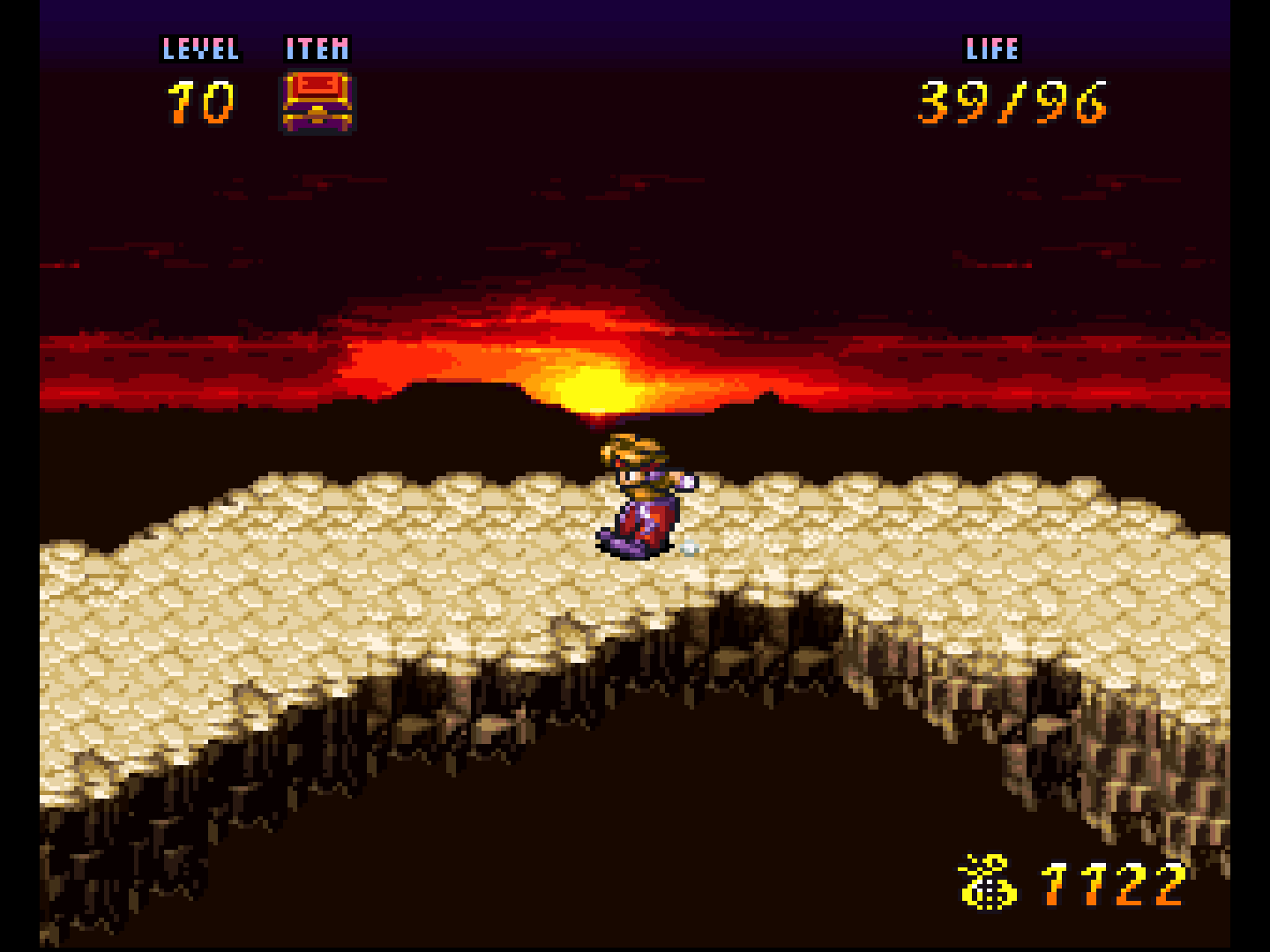 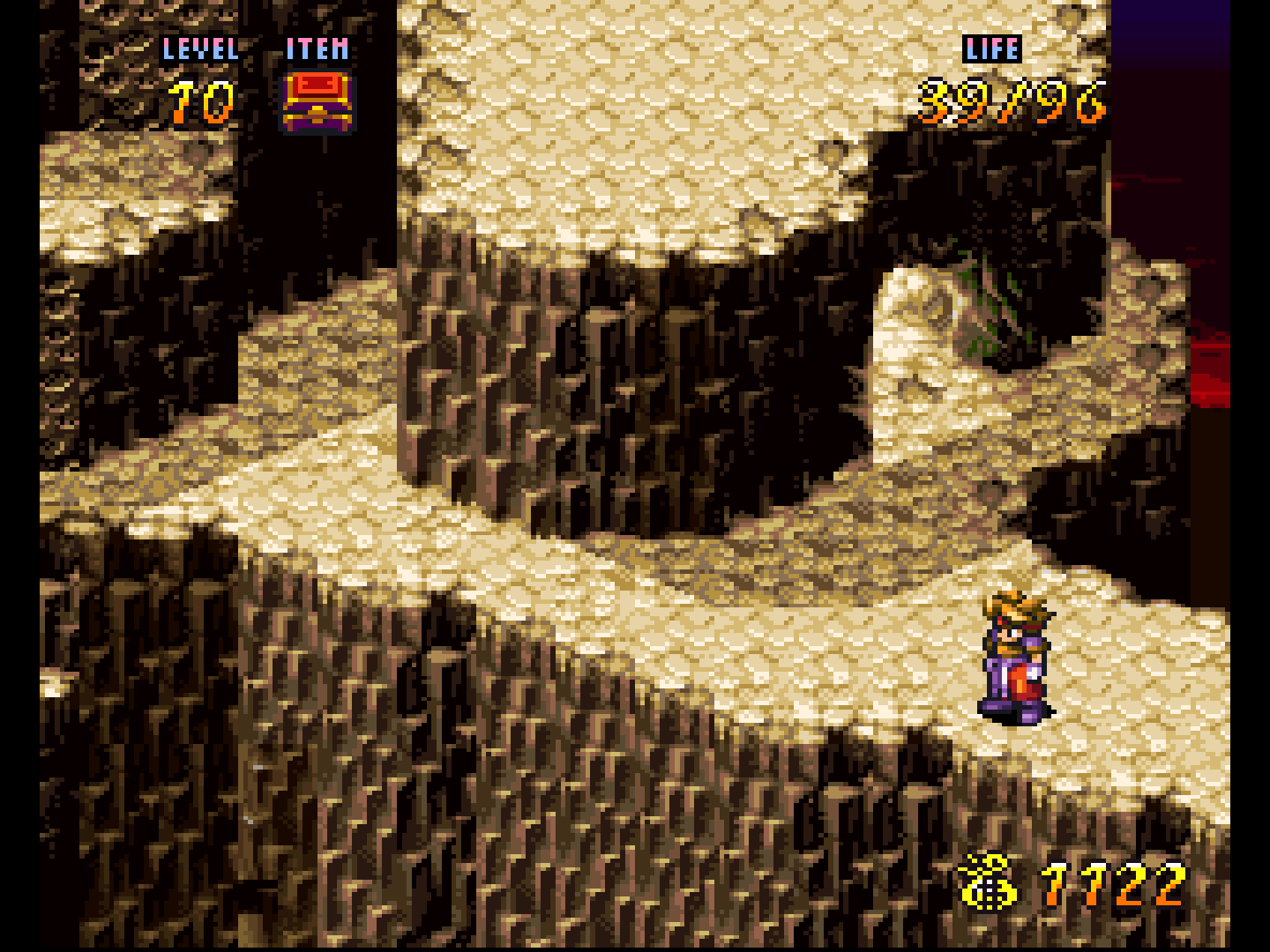 Inside a tunnel in the second cliff, small leaping mini-stone heads fire small fireballs at us!

I give up and have Ark sprint away from them, and find more Magirock! 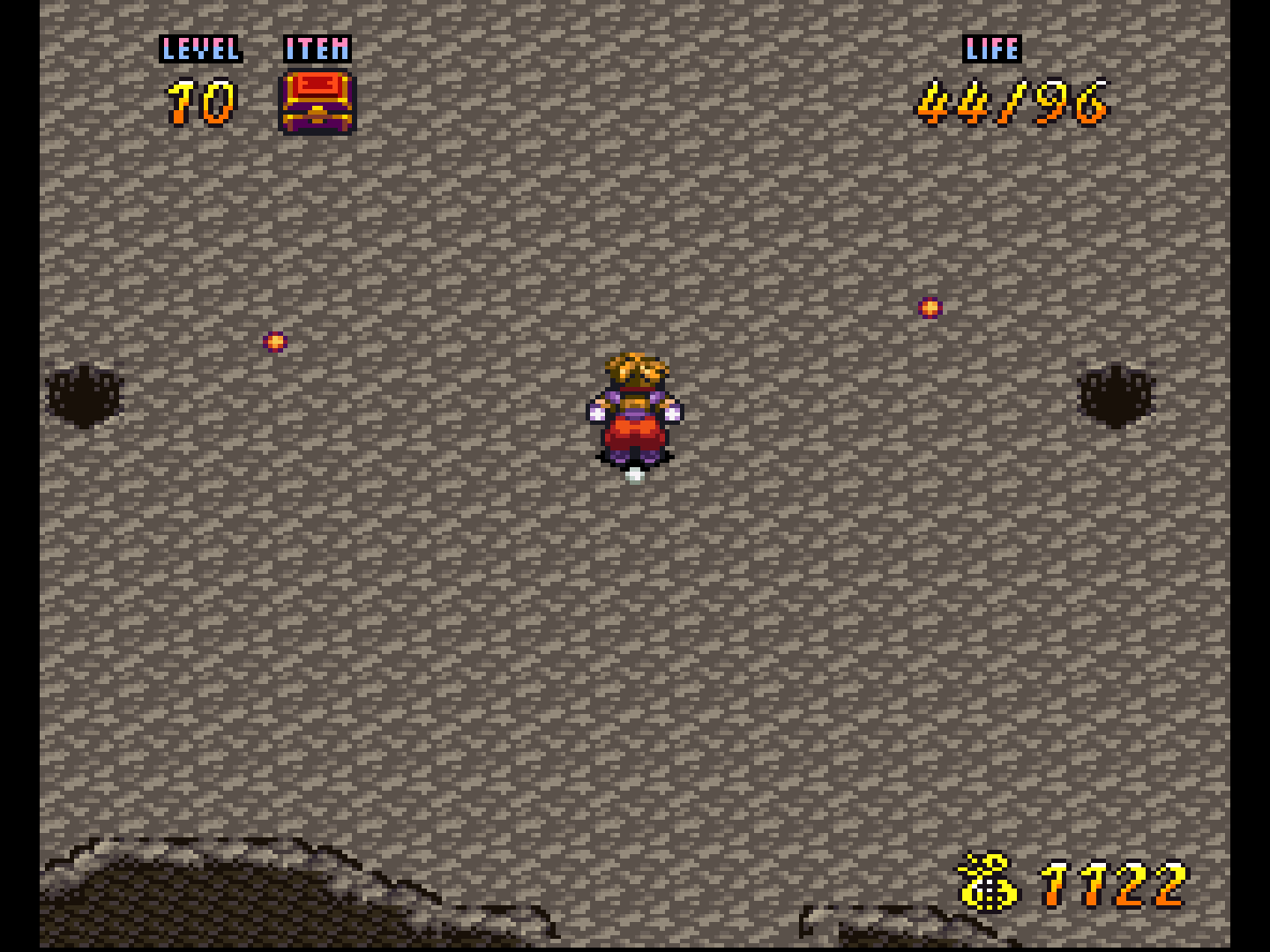 On the other side of the large passage, we climb another set of steps into more of those falling platforms! 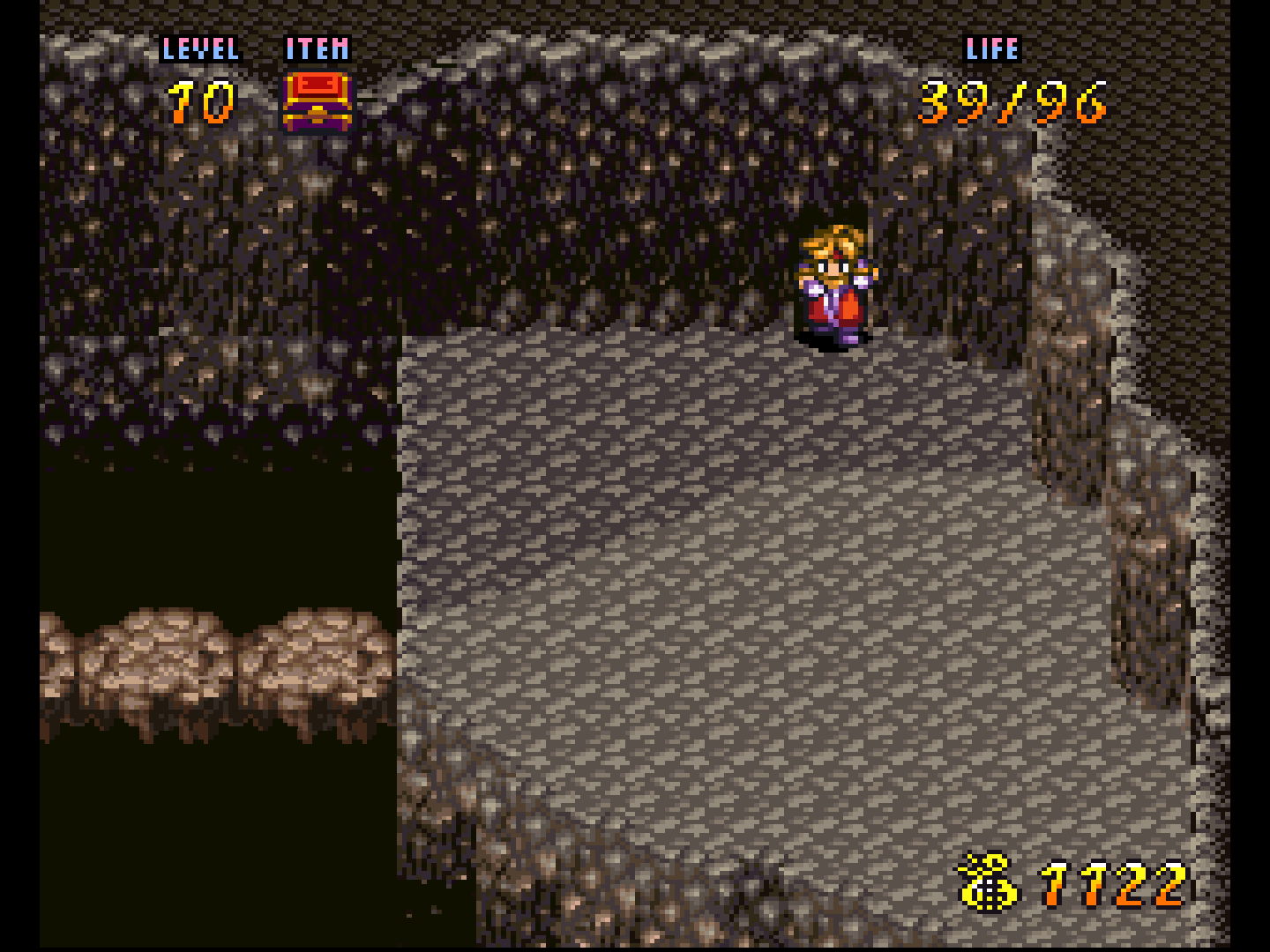 We make a sprint for it, which doesn't cause the platforms to fall. I realize they're not falling because of the Quaker head on the other side didn't jump...

The rest of the room has more of those large stone heads!

I have Ark sprint and quickly take care of them as we go. 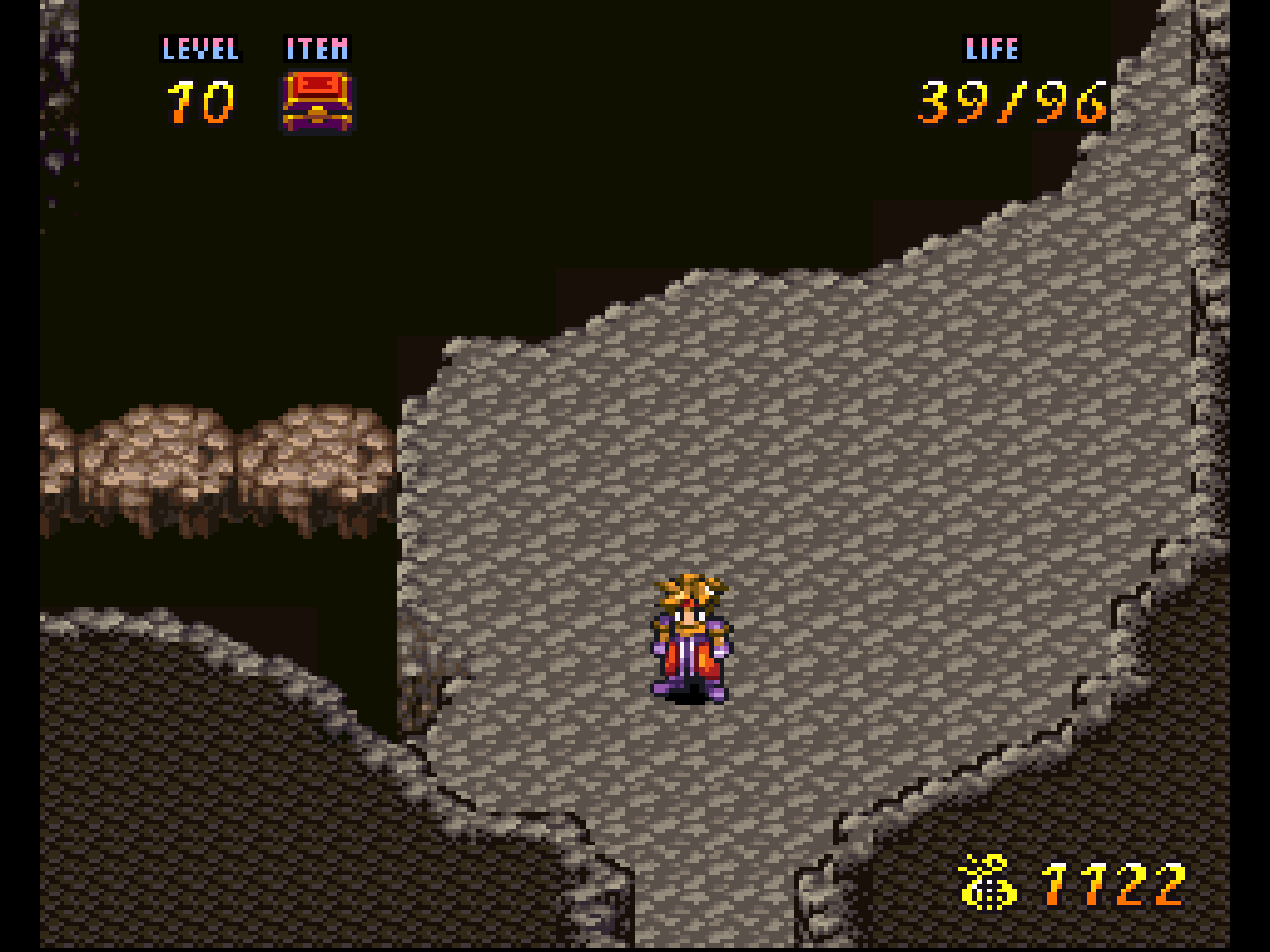 Unfortunately, our small celebration is short-lived as more swoopers come to roost on Ark! 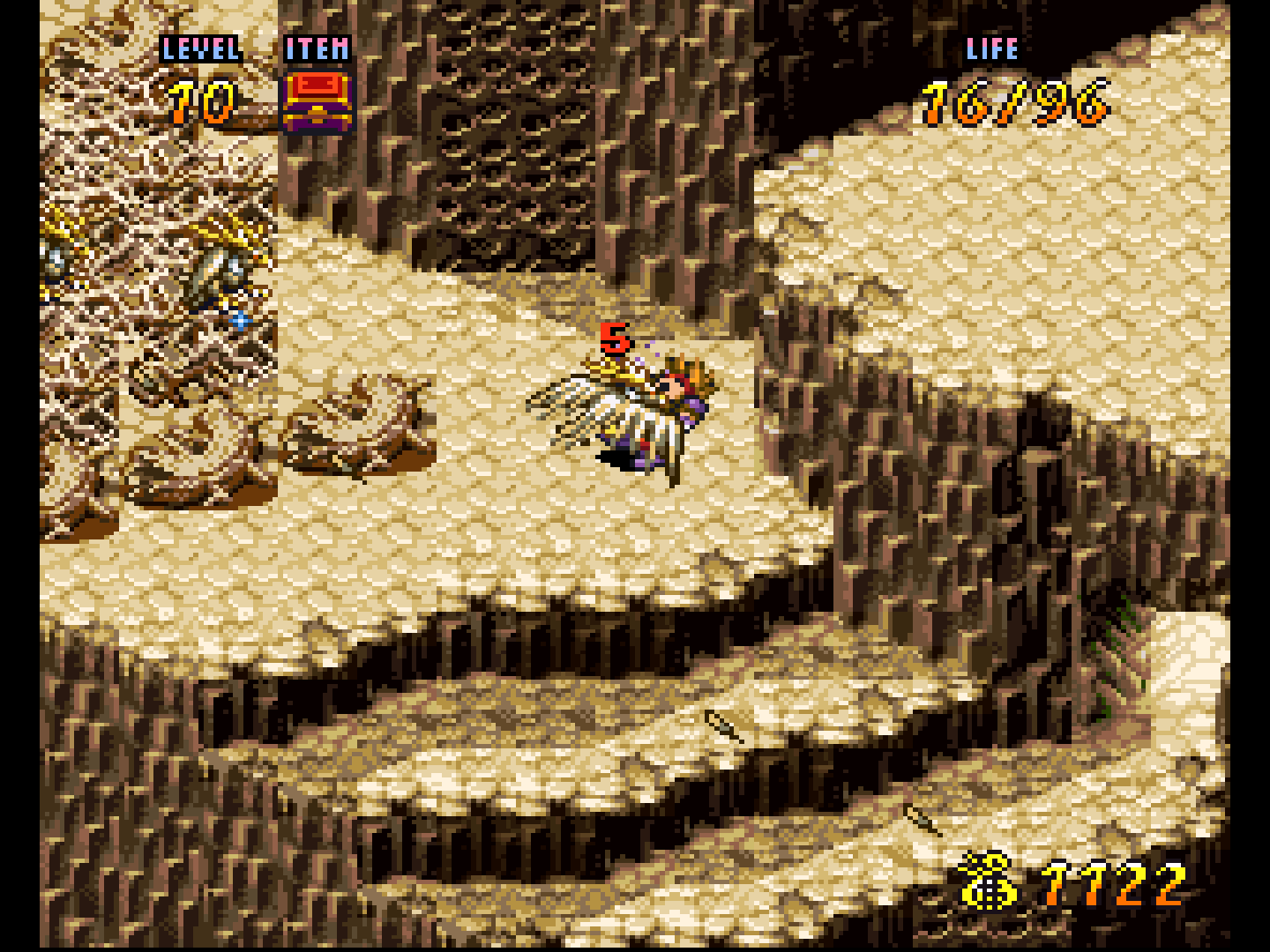 So we're now at their giant nest, huh?

We noticed a sparkling thing in the nest, and pick it up. 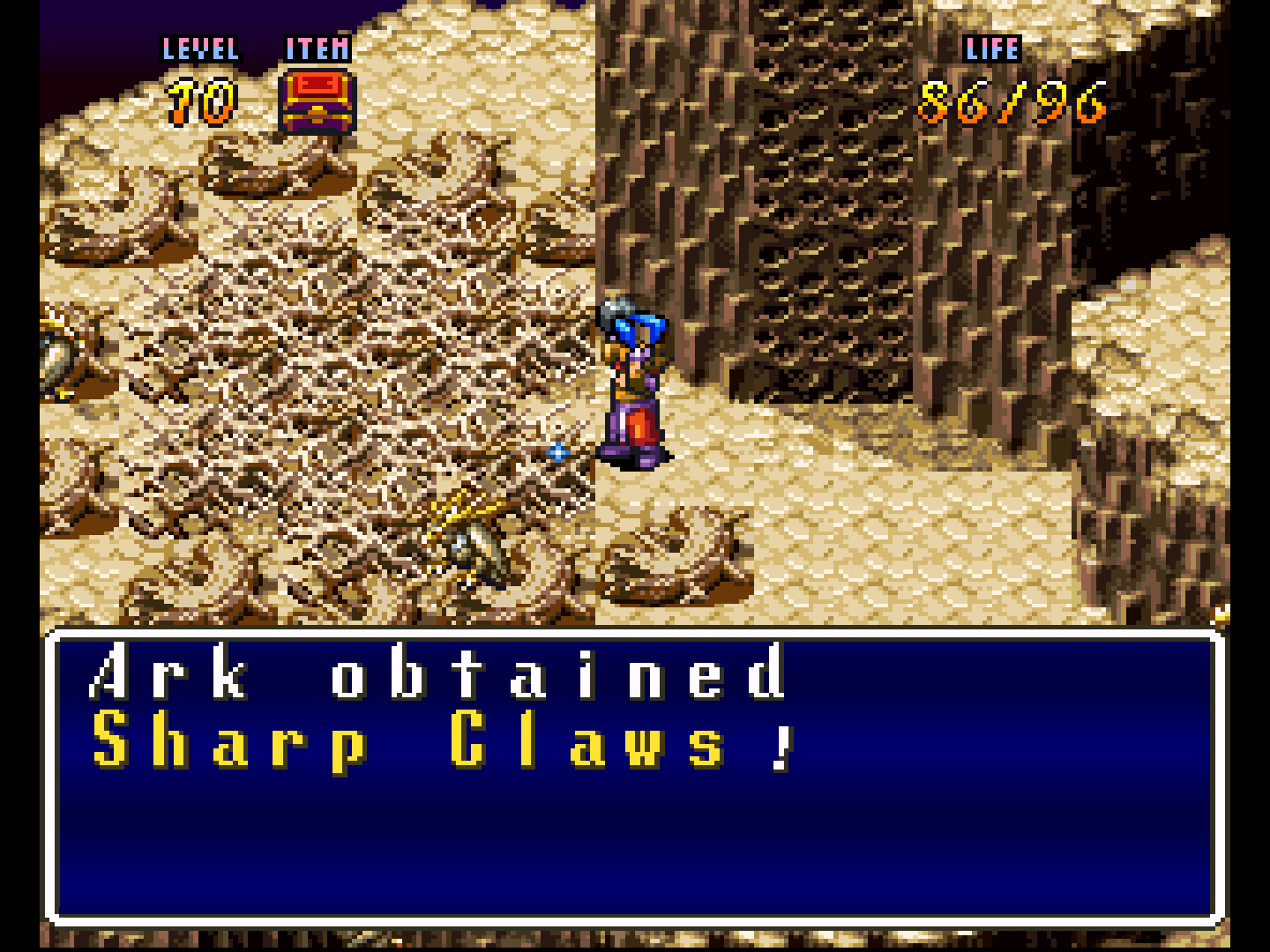 I also learn that the swooper birds here are called Peritons.

I test the Claws out on some of the cliff faces we've seen. 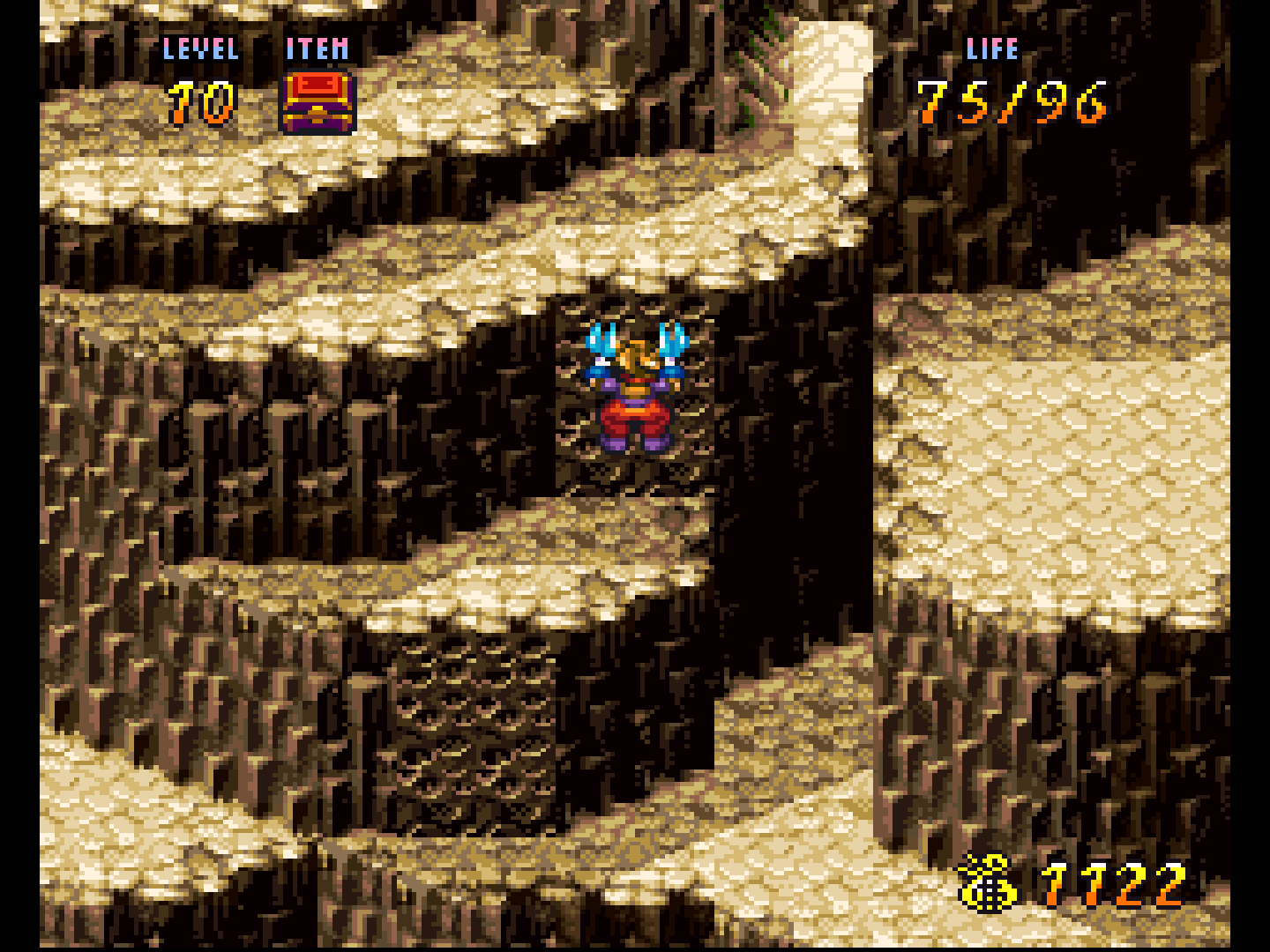 I have Ark climb up the long cliff, reaching a tunnel. From the map, we're now in the large part of the fifth floor.

We run into more old enemies such as the Peritons, and Quaker stone heads.

Up another cliff, we meet more of those small rolypoly people, and find more money and a Magirock! 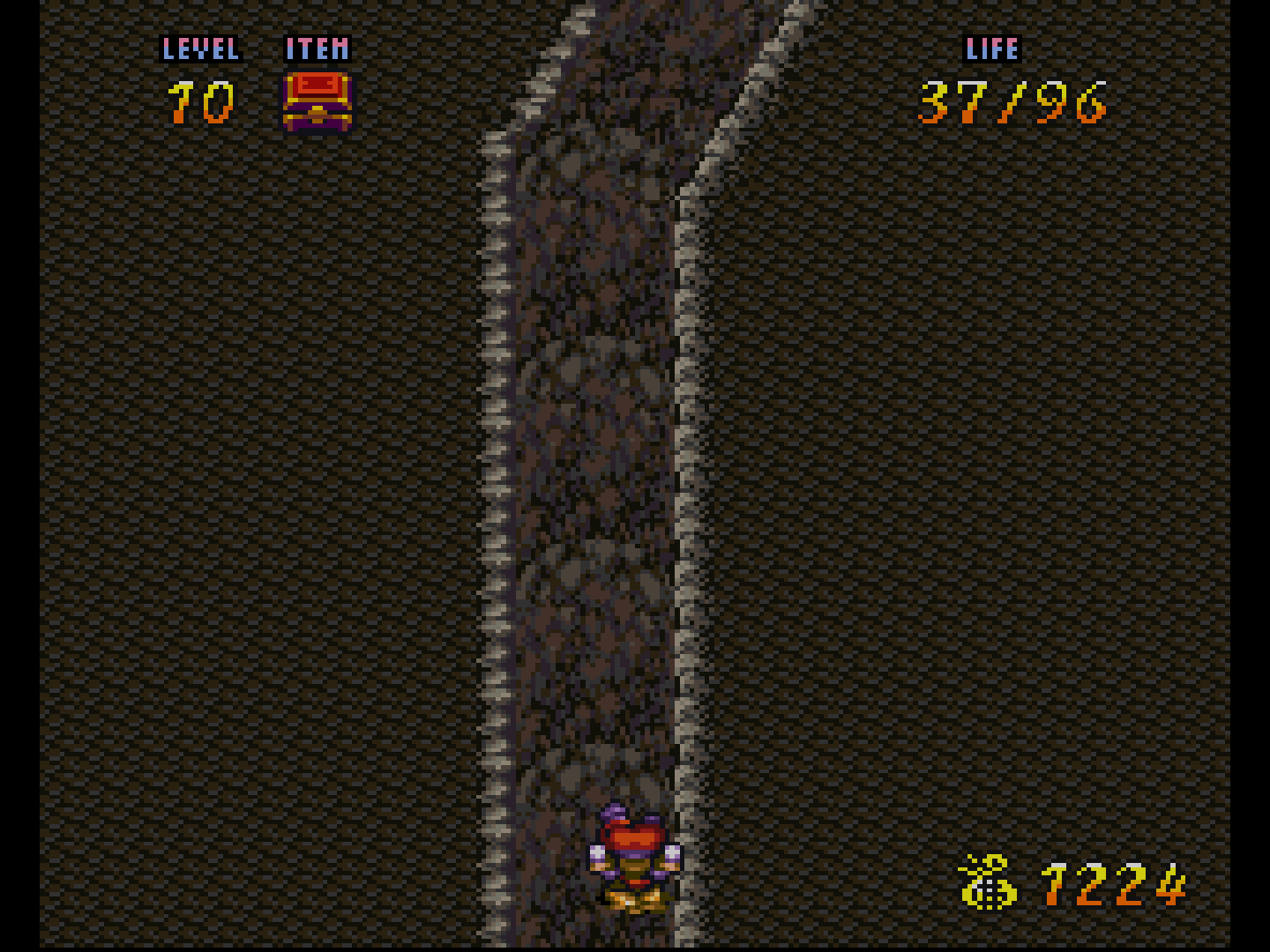 At our landing spot, I notice another Magirock, but the vine to get up there is too short and too far to reach! 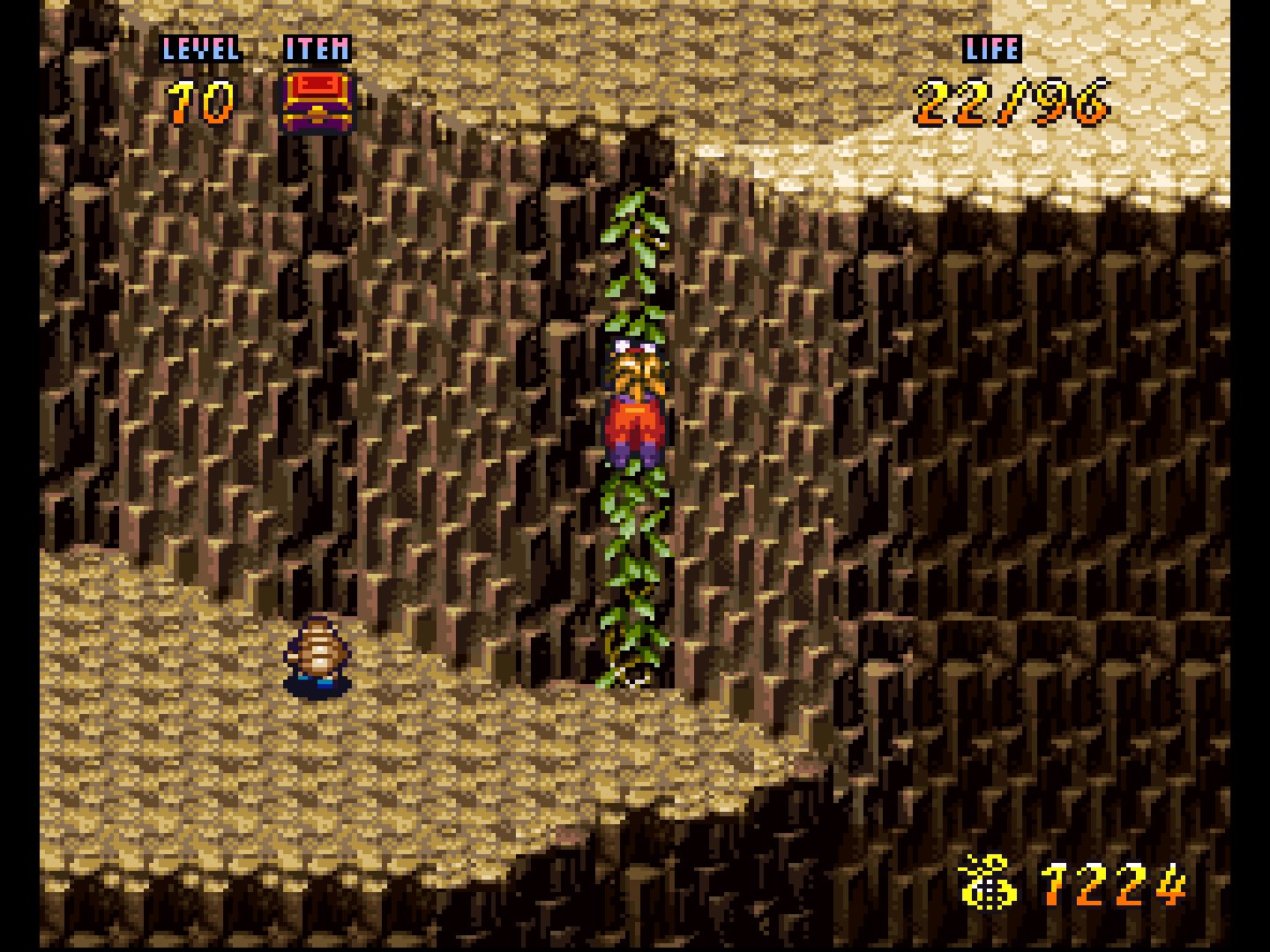 Dangit, we're almost low on health! After some healing, I check up on the description of the Sharp Claws. 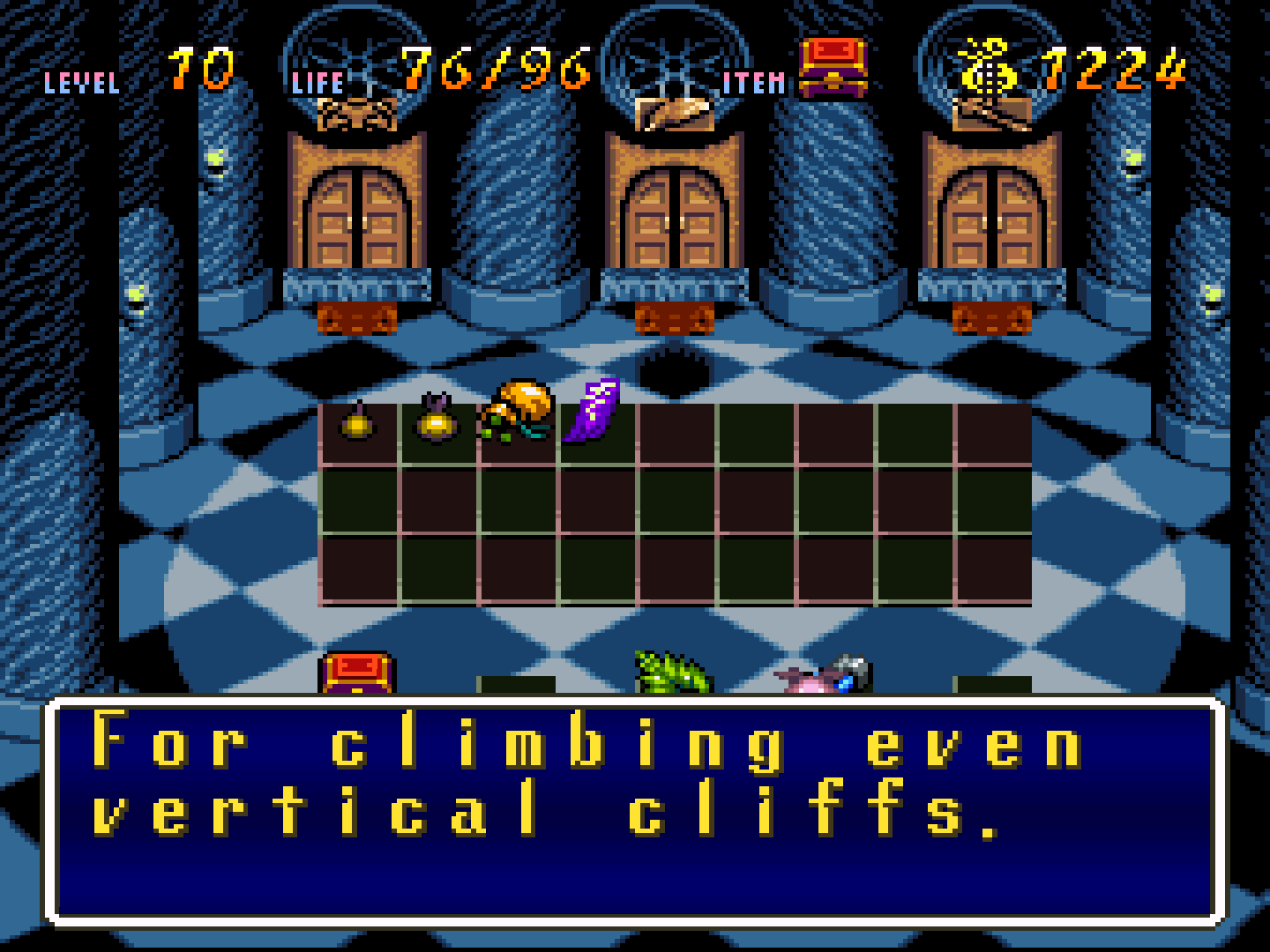 Westward, we're back at the entrance, but on the top cliff this time! 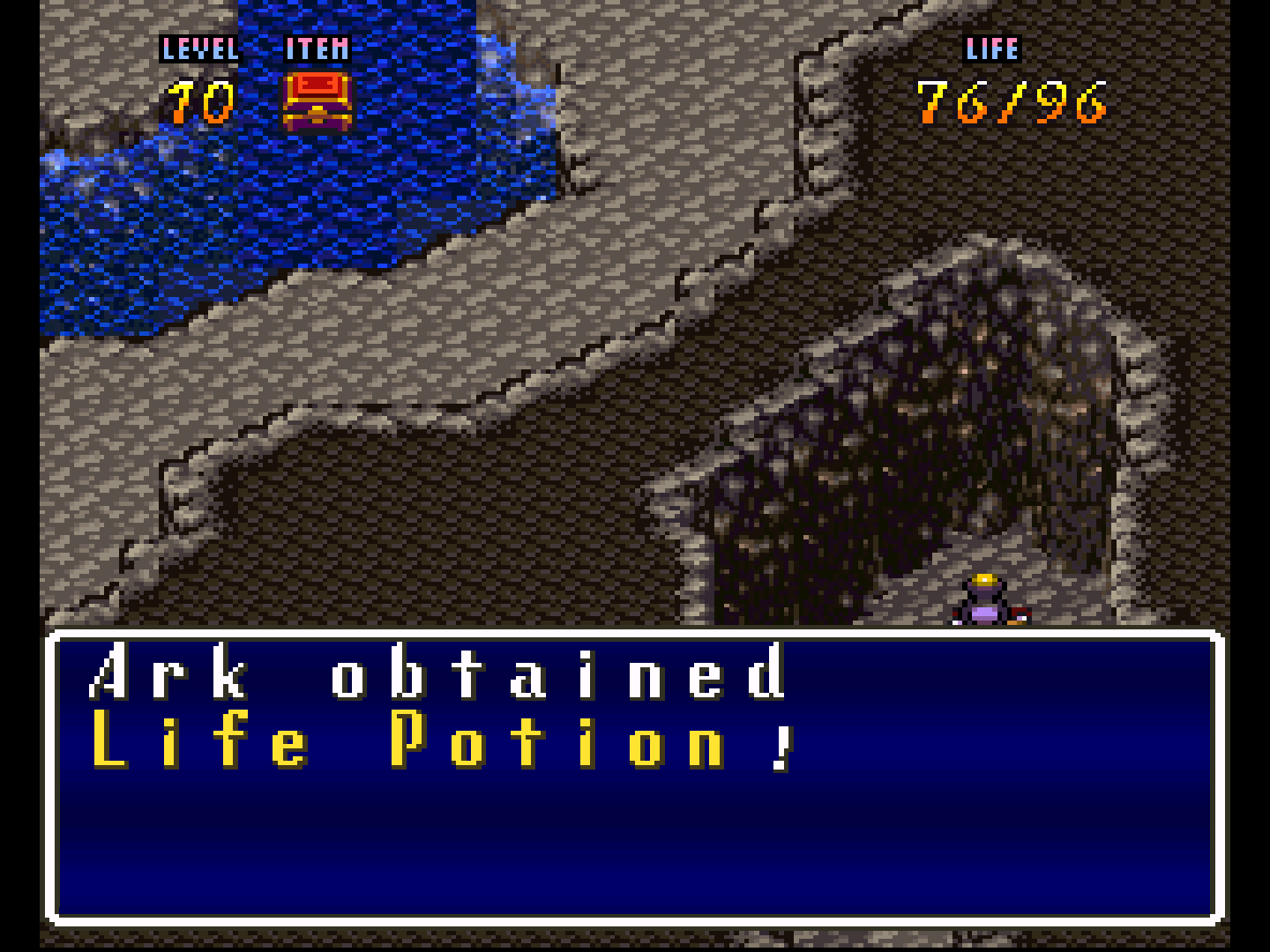 I leave the Grecliff, or as it should be called, the Great Cliffs, and do some R&R for a bit.

While I'm writing this, I forget to pause the game, as a stone creature attacks Ark!!