I accidentally shut off the game while trying to take a screenshot. Lucky I saved a few seconds ago!

Back to the action! 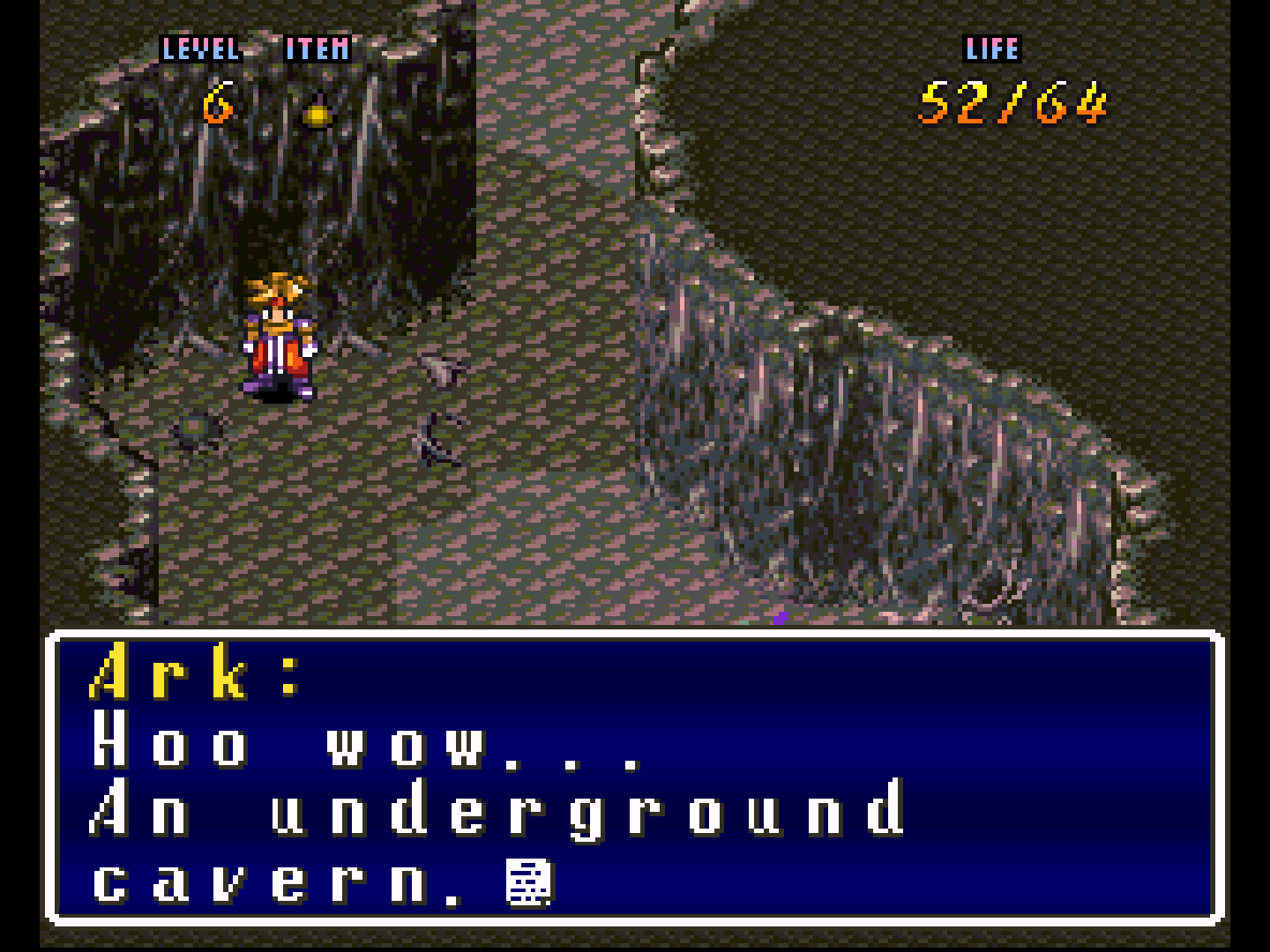 Ark: "If this tree was a man, then these corridors must be its veins."

We proceed forward, and see a small, pulsing, gray bulbous plant. I have Ark attack it, but it's actually holding treasure! 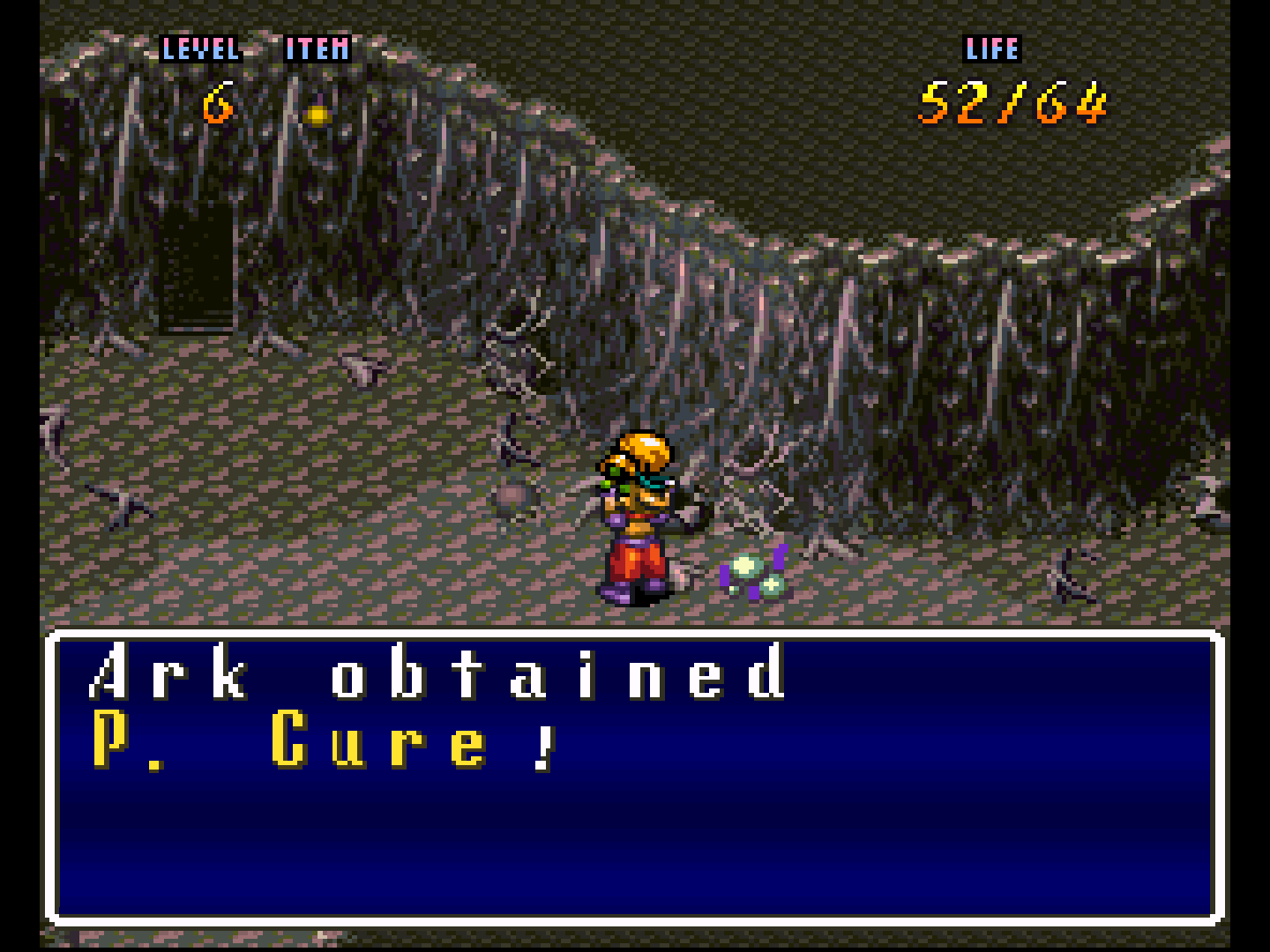 Eastward, a monkey sees us and we begin the fight!

The monkey takes several hits before the fireworks.

We move west, where we see another monkey and a fireball spouting plant bulb!

After the monkey's gone, I have Ark go after the bulb, but no good.

Further west, we take care of a spinning rafflesia flower nearby...

Since we're full of healing bulbs, we can't take what's in the chest. I solve that problem by using one.

There's even an animation of Ark eating a healing bulb! I like that detail.

Climbing up more steps, we see a purple pool with shadows of creatures beyond our imagination swimming about...

And a monkey, no, two monkeys tumble down! Along with jumping piranhas!

When the rafflesia's petals are closed, it's invincible to Ark's attacks!

In the next area, Ark accidentally falls into the purple drink...not good.

We're stuck in the next area, until we take care of the piranha pair swimming nearby. 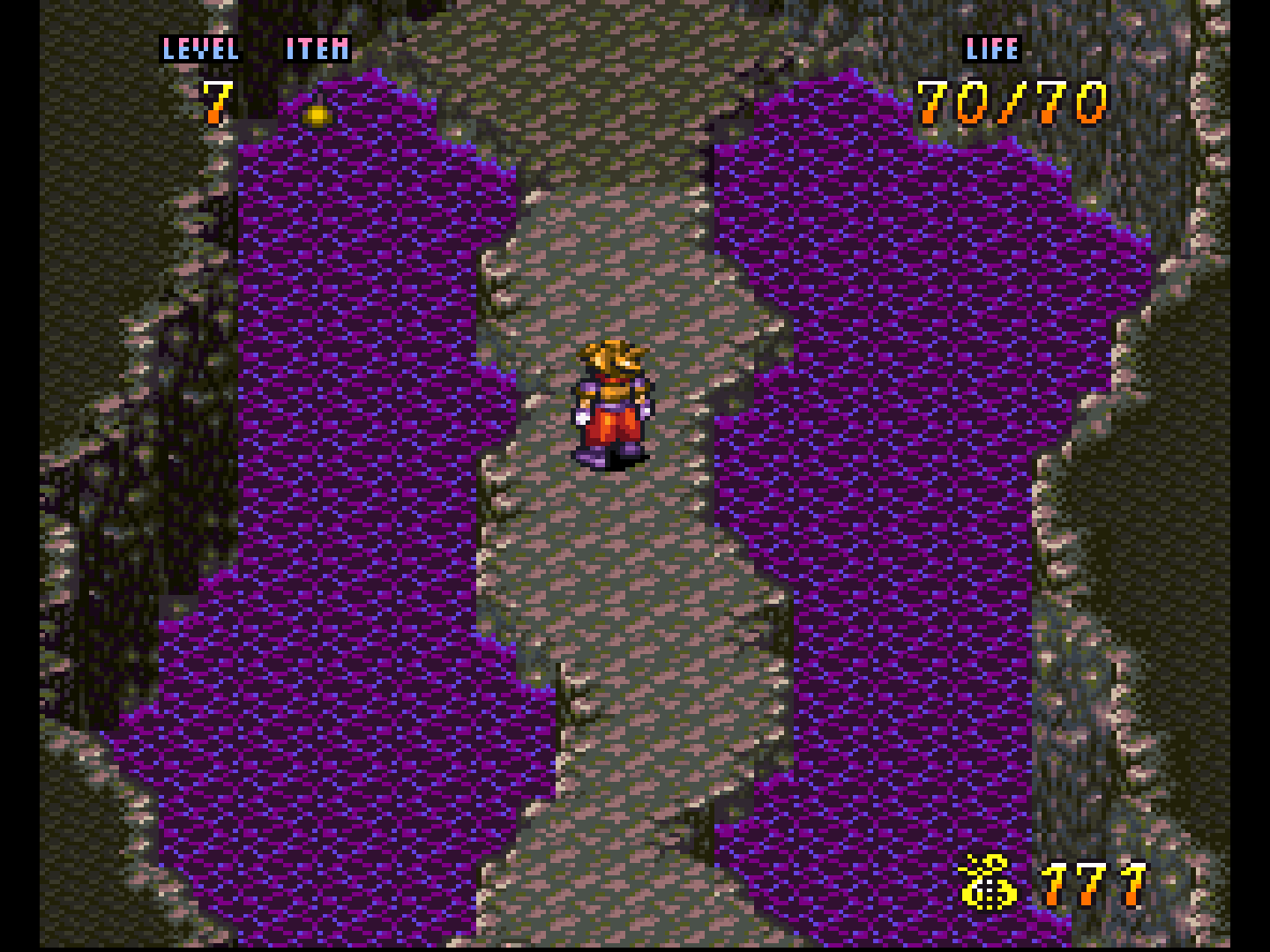 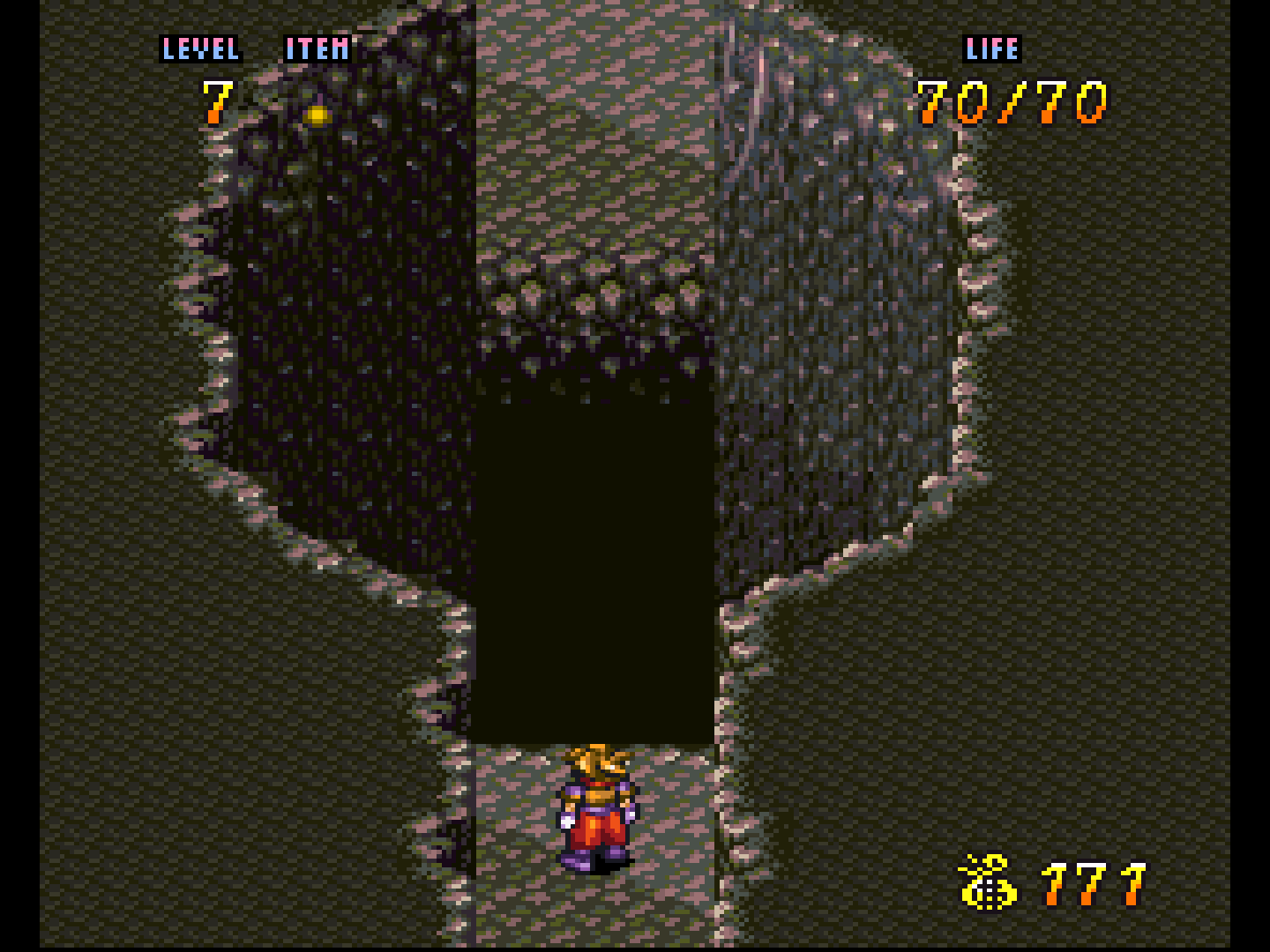 I have Ark take the plunge! 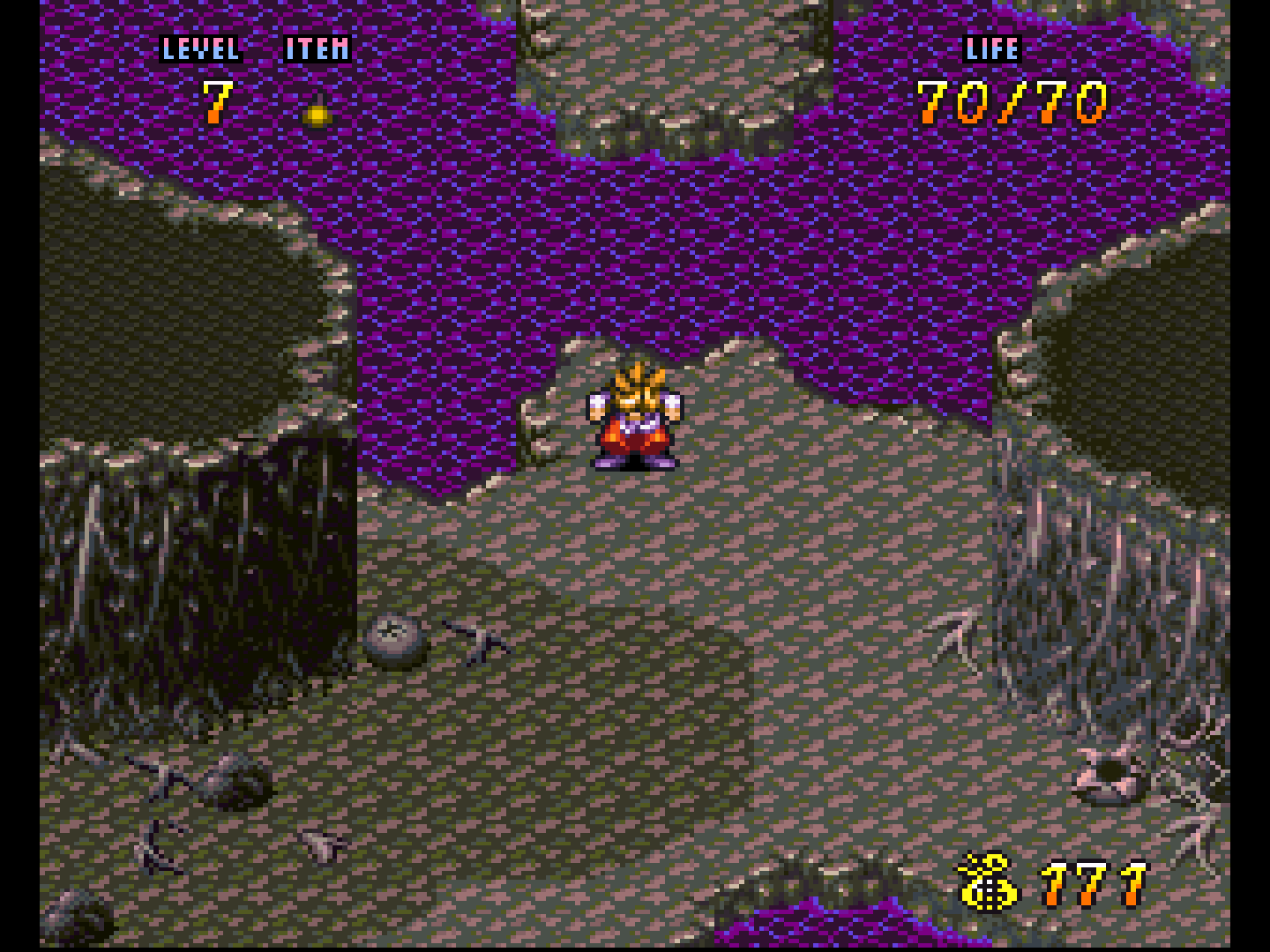 West, there's nowhere to go from this point... 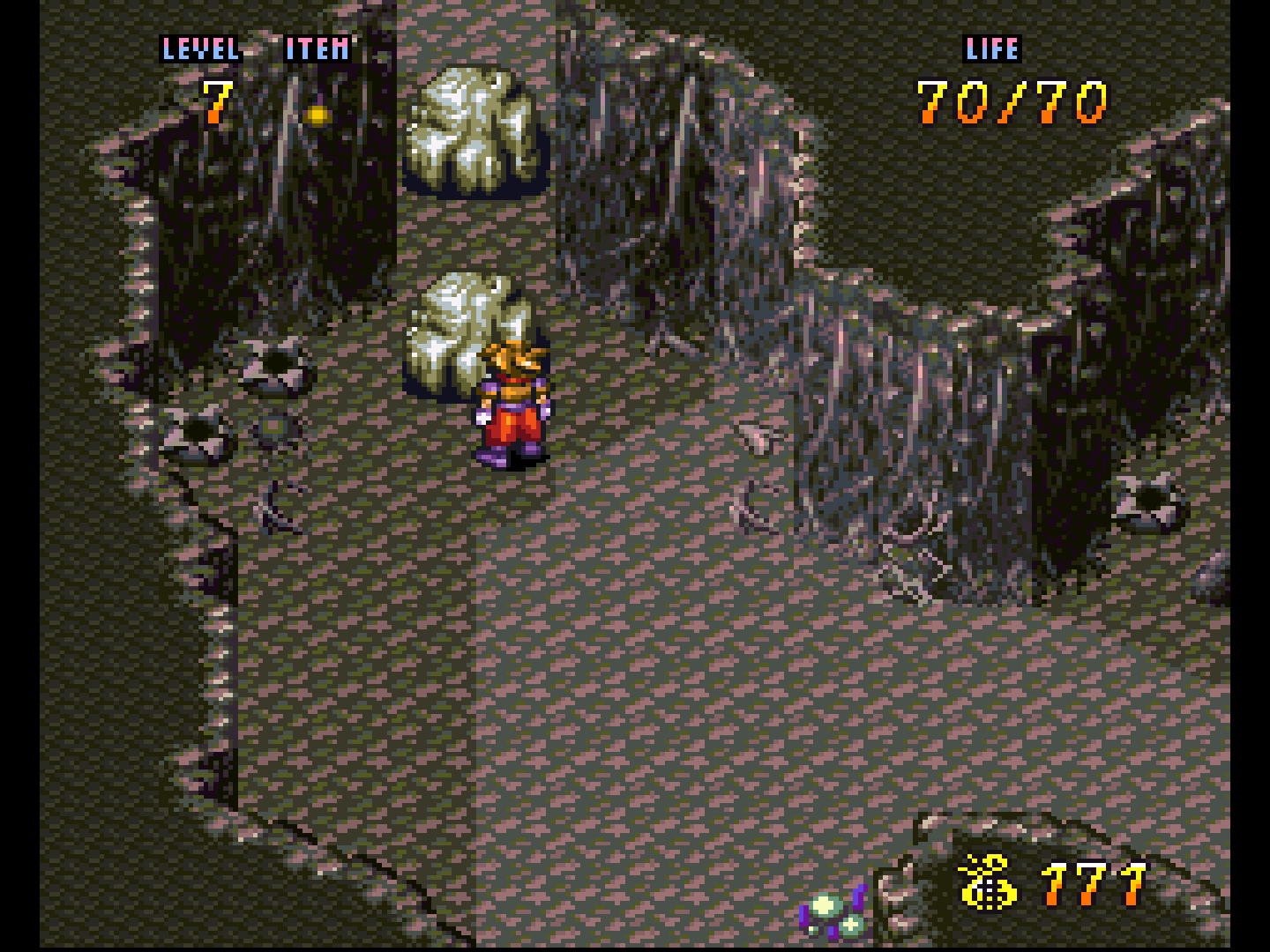 I suddenly realize I'm in a dungeon and check the map...

There's eight basement floors in this cavern, with the eighth floor basement written in ciphered characters. 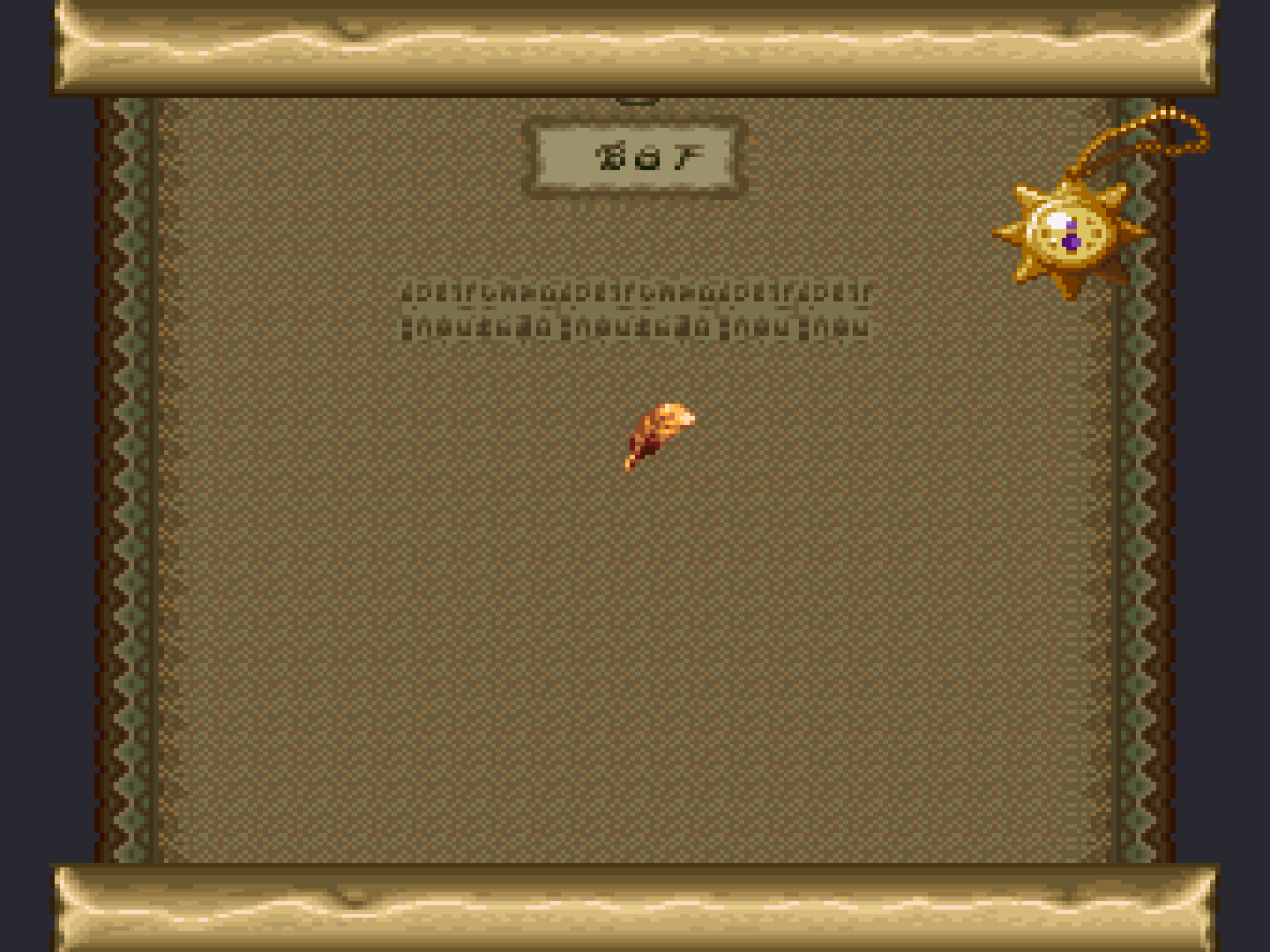 East of here, I take care of another spinning flower and pick up another antidote before going deeper in the cave...

After a tussle with some monkeys, a nearby purple rafflesia's spore poisons Ark!

Instead of a level number, I get the character for poison! I cure it immediately and proceed to take care of the cause.

I have Ark retrace our steps and go south this time, where more dangers await.

After the area's clear, I have Ark jump to the other side of the purple pool to take care of the plant bulbs by carrying and throwing them like jars!

Up north, more monkeys, and a small sound warns me Ark's low on health! 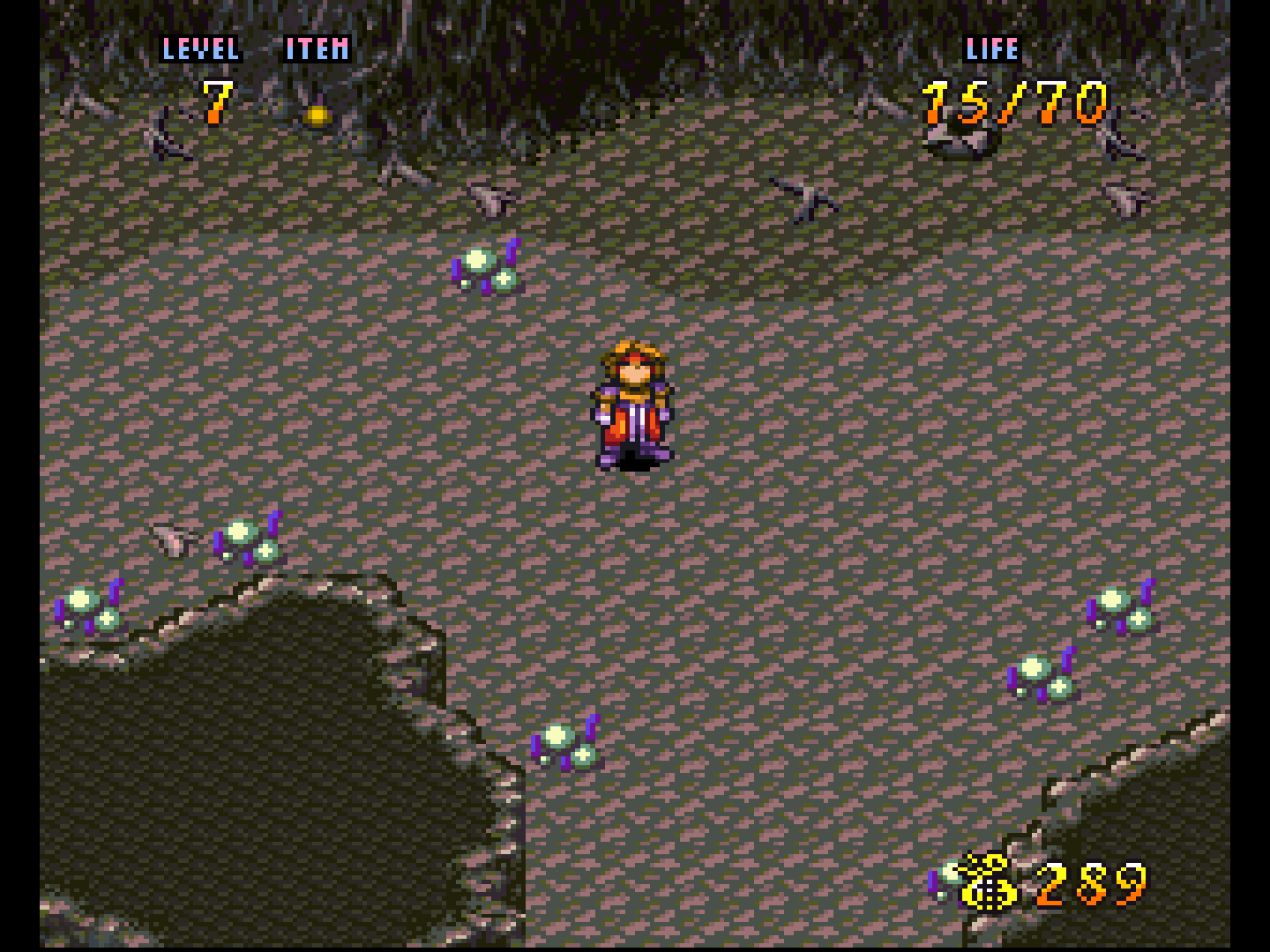 I have Ark throw out all the pulsing plant bulbs before going downstairs...

And Ark's poisoned by that flower again! Lucky we have more antidotes... 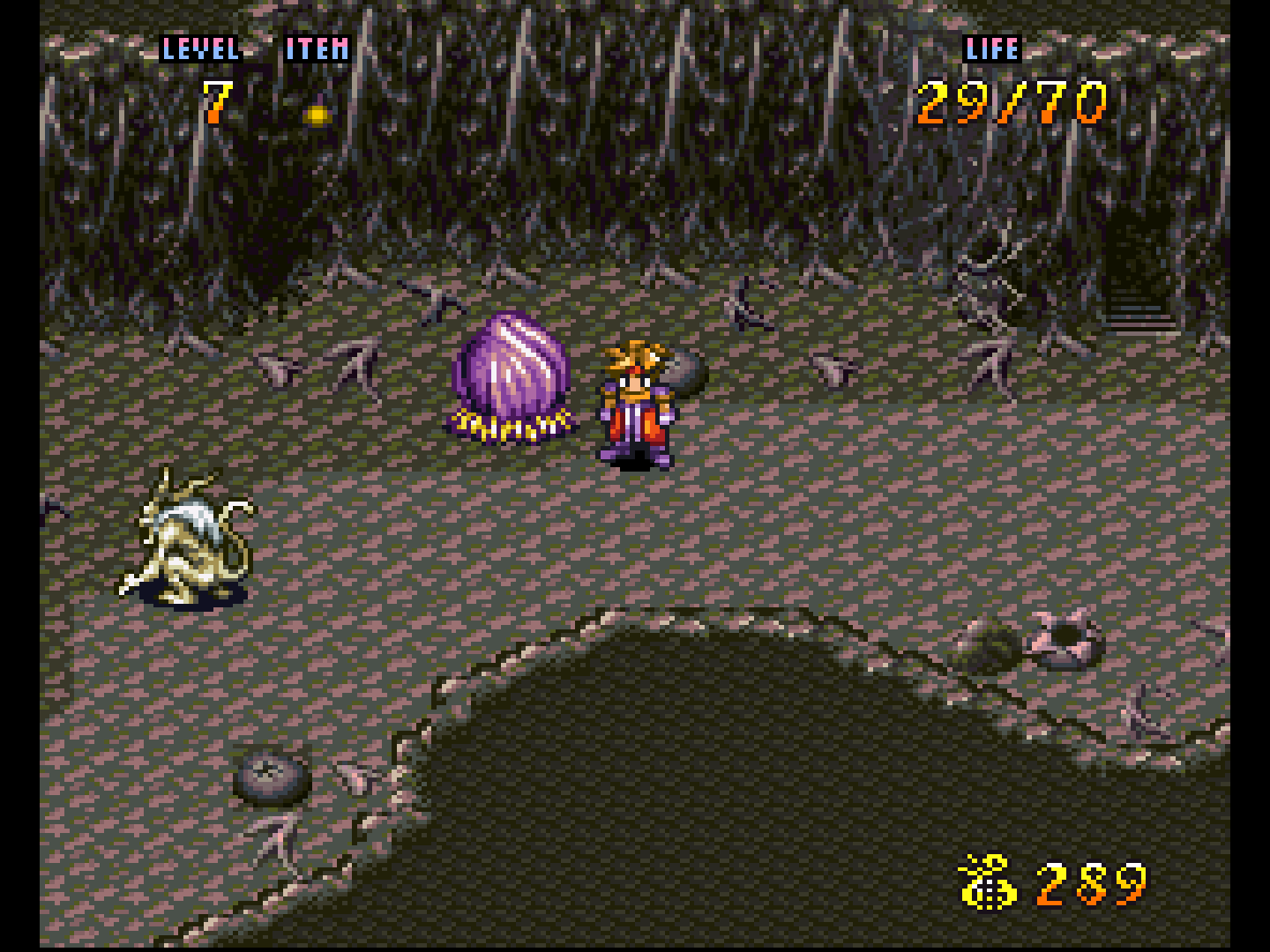 In one of the "chests," we get another Life Potion!!!

Noticing a staircase northeast, I avoid that area until I clear the whole floor.

Next area eastward, more flowers, monkeys, and piranhas! Ark levels up too!

Near a chasm, I take care of another rafflesia, freeing a soul! But Ark falls down... 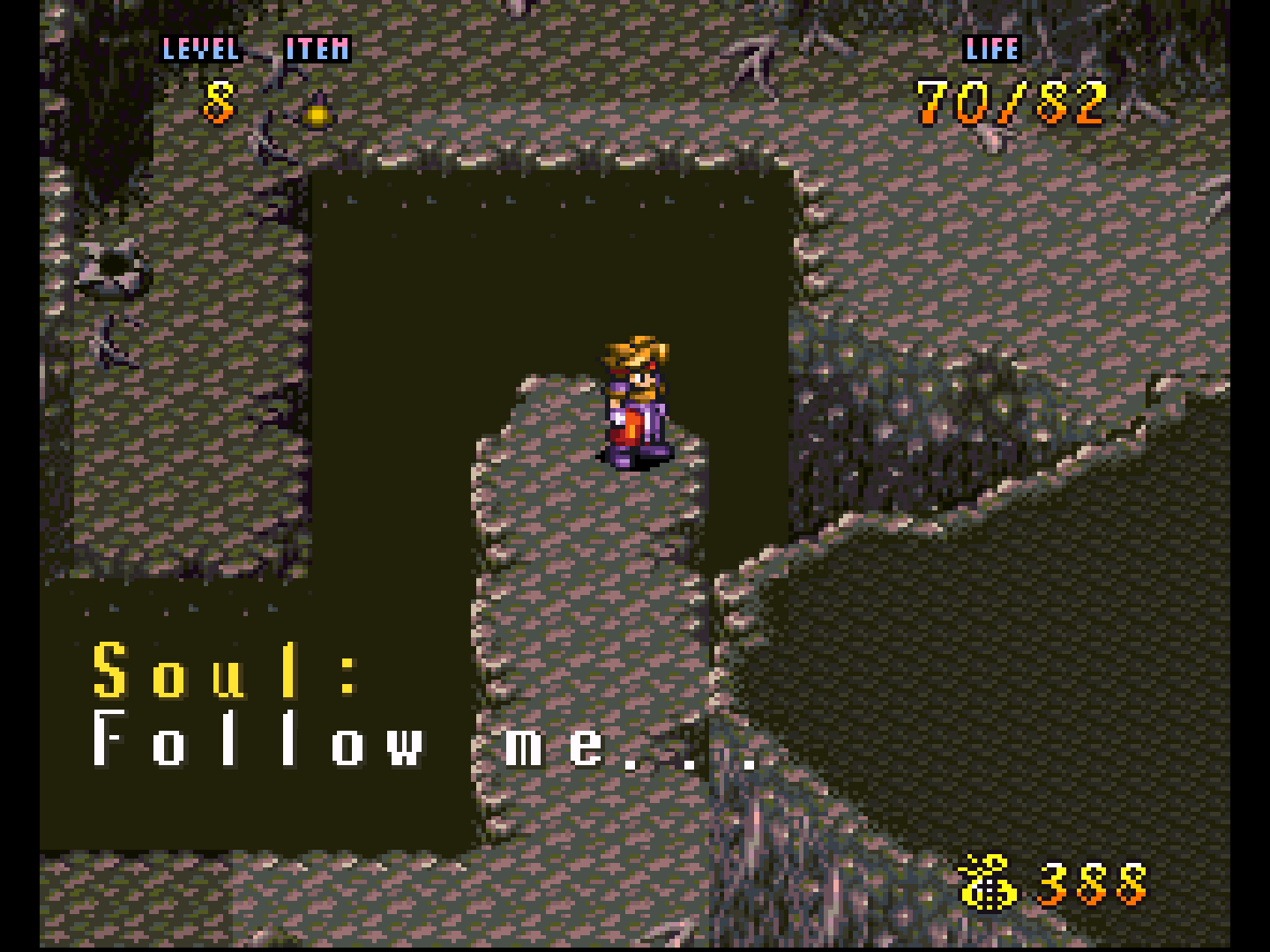 I have Ark jump past the chasm and follow the soul to a staircase.

I go back to the previous area and go down those stairs first... 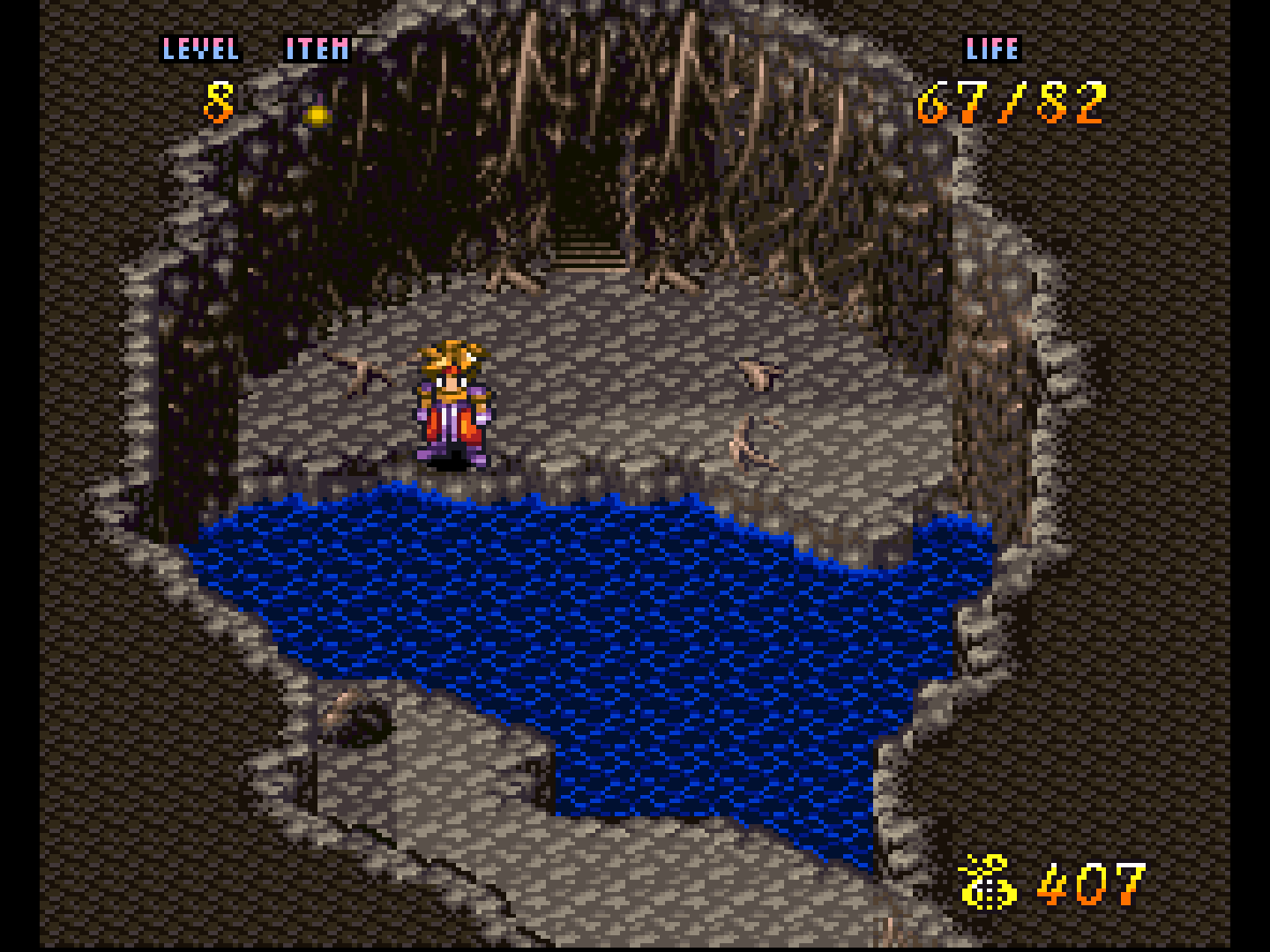 After several attempts of jumping across the blue water here, we turn back.

On the way to where the soul was going, I noticed a little glitch, but I failed to take a picture of it...

Downstairs, we meet up with the soul again, who floats down into the long maze of roots below! 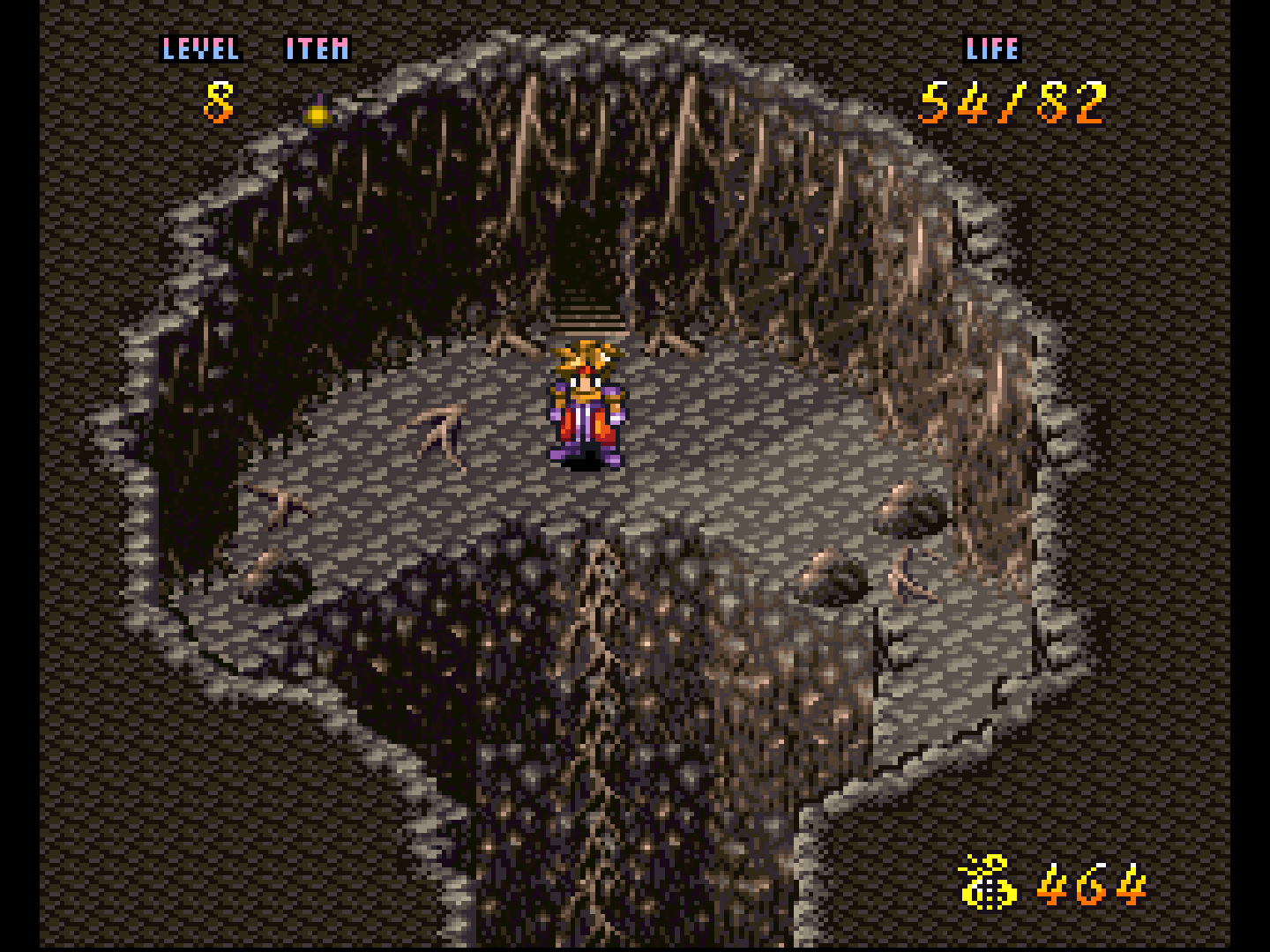