After tons of battling, we make it back to the peak cave, and begin Joch's test! 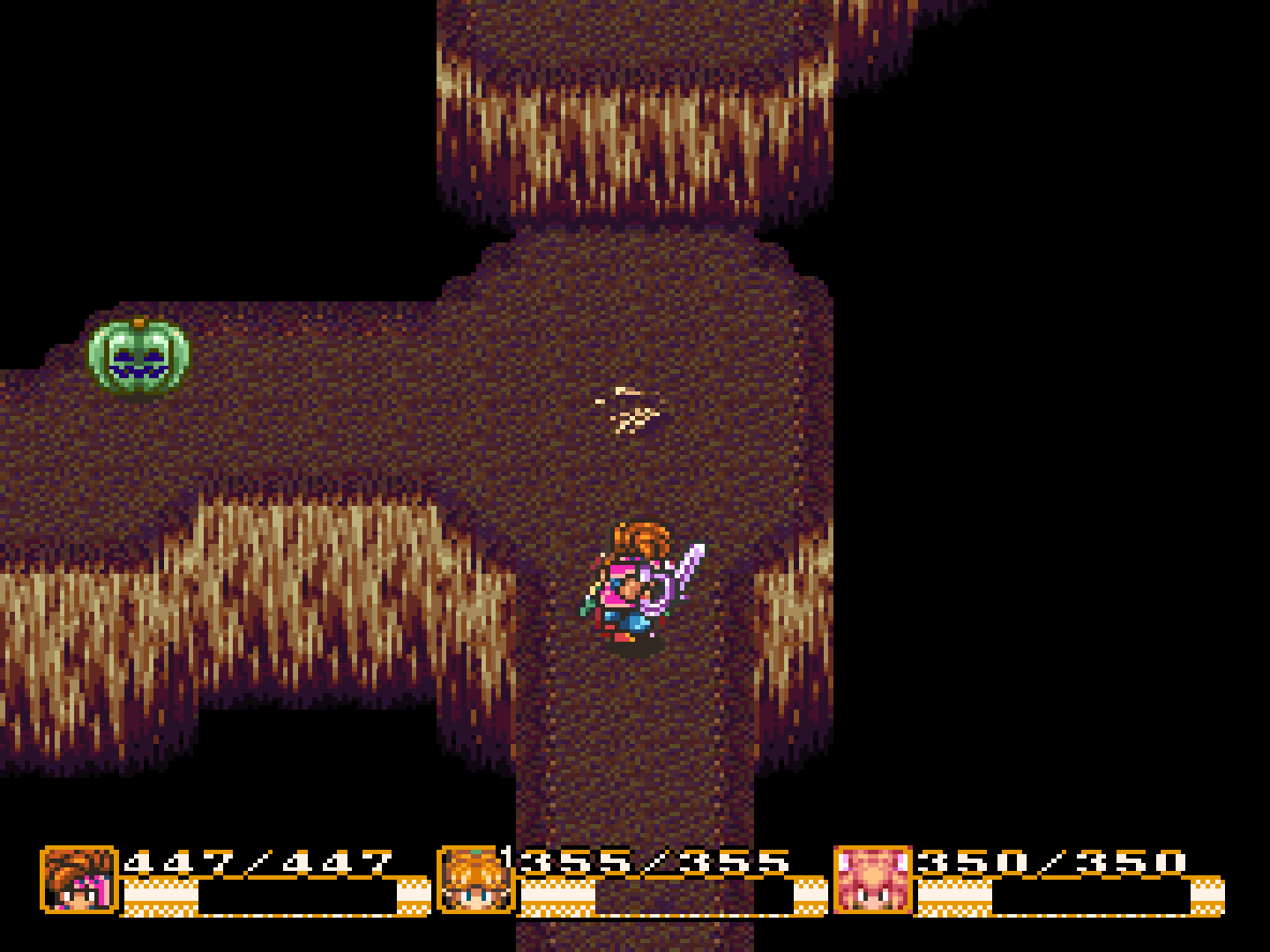 The green jack-o-lantern is a Nitro Pumpkin, and they're immune to physical attacks! Unfortunately, I can't use magic either since they've cast Reflect, or a Wall spell on themselves!

I try to have Max Dispel the Reflect buff on the enemy, no good!

Reading an online guide (and spoiling myself on one or two of the enemies there in the bestiary), I find no help on how to take care of this pumpkin!

I fully charge Hero's attack to the maximum, which seems to work!

Now I head forward and break through the stalagmites with the axe!

Another monster, a gray slime called the Shape Shifter, is here as well!

And as it's name states, it can transform into any monster!

Southwards to a fork in the road, and the east path is the only way through...

The Shape Shifter's transformed into another new monster, Capt. Duck!

The duck captain unleashes an Exploder!

We eventually push back against the tough Shape Shifters...

Capt. Duck however is a stubborn, quick one! Even Max's Magic Absorb can't take out his MP!

We jump to the other distant ledge...

Another Shape Shifter splits and transforms into an Eggplant Man!

The Needlion's needles can turn our party into stone!

Things are going downhill from here...

Worse, the Needlion's a strong one, causing 300 damage each to Hero and Pidge!

I have no choice but to flee further into the cave... 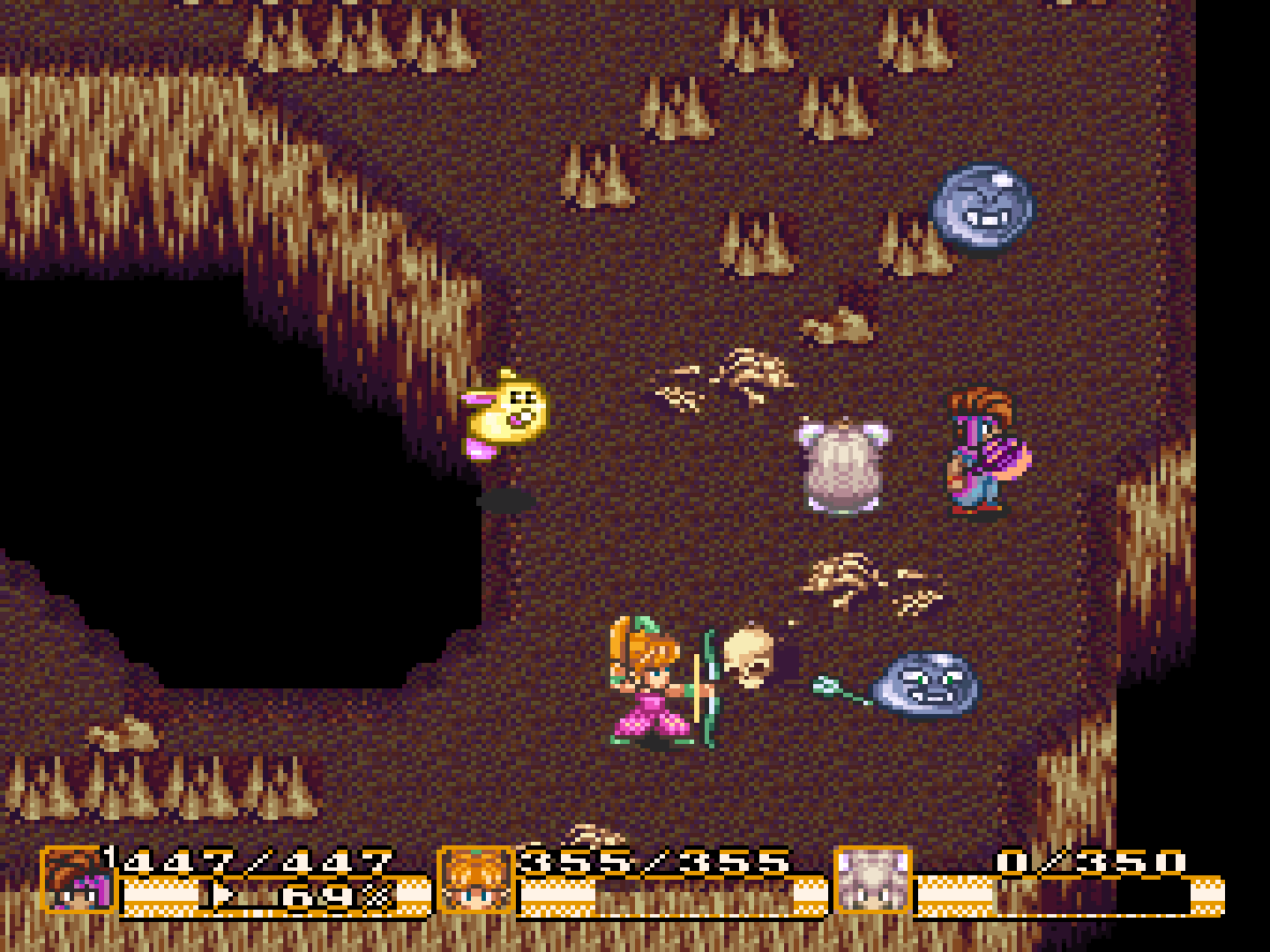 Now we're surrounded by more Shape Shifters! One turns into a Rabite, an easy win!

The Shape Shifter splits and turns into Capt. Duck, and another one!

It's quite an overwhelming match so far!

With patience, I get the upper hand on the transformed Shape Shifter!

Now forward to the next area... 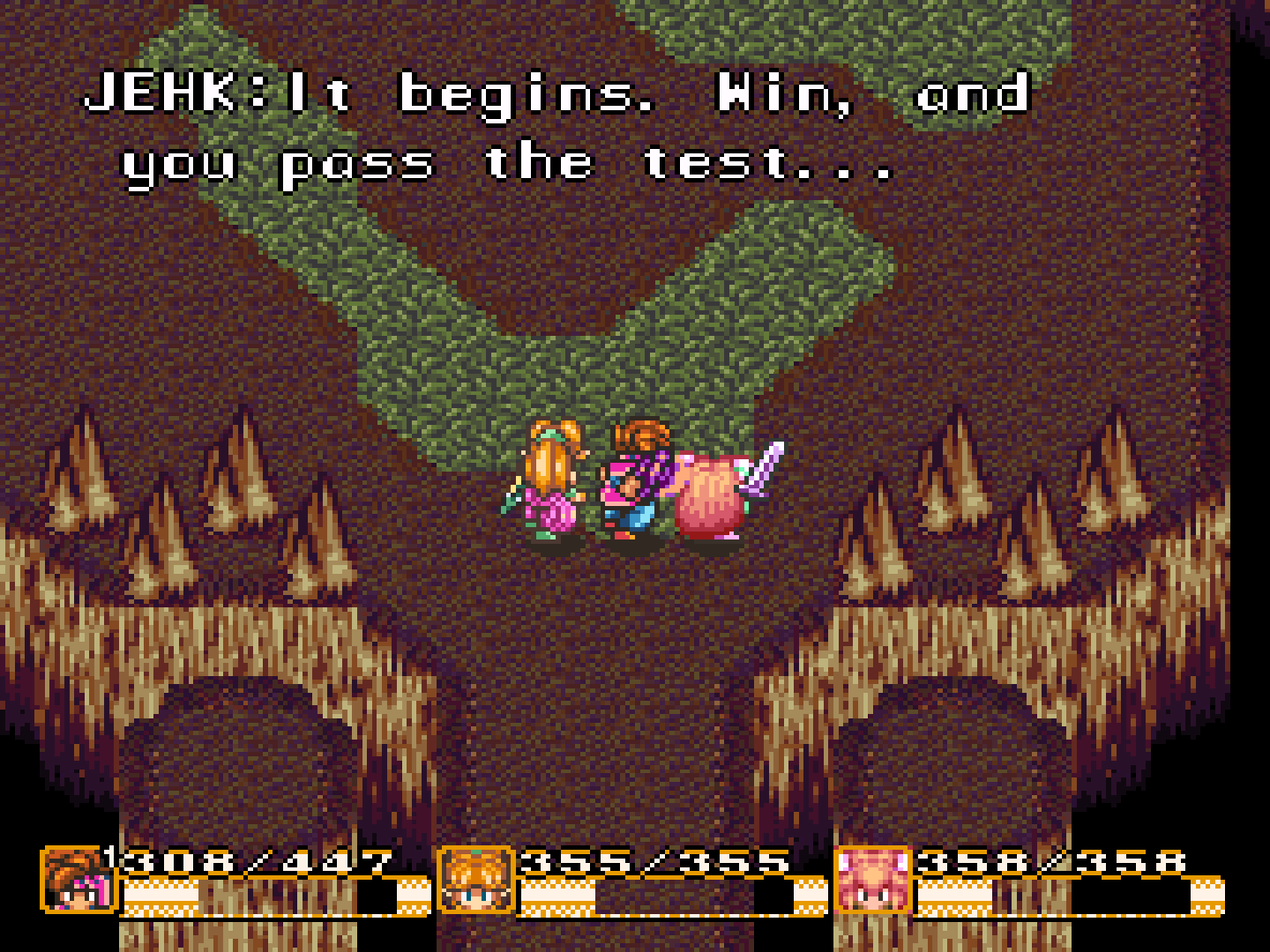 It's a mirror match! 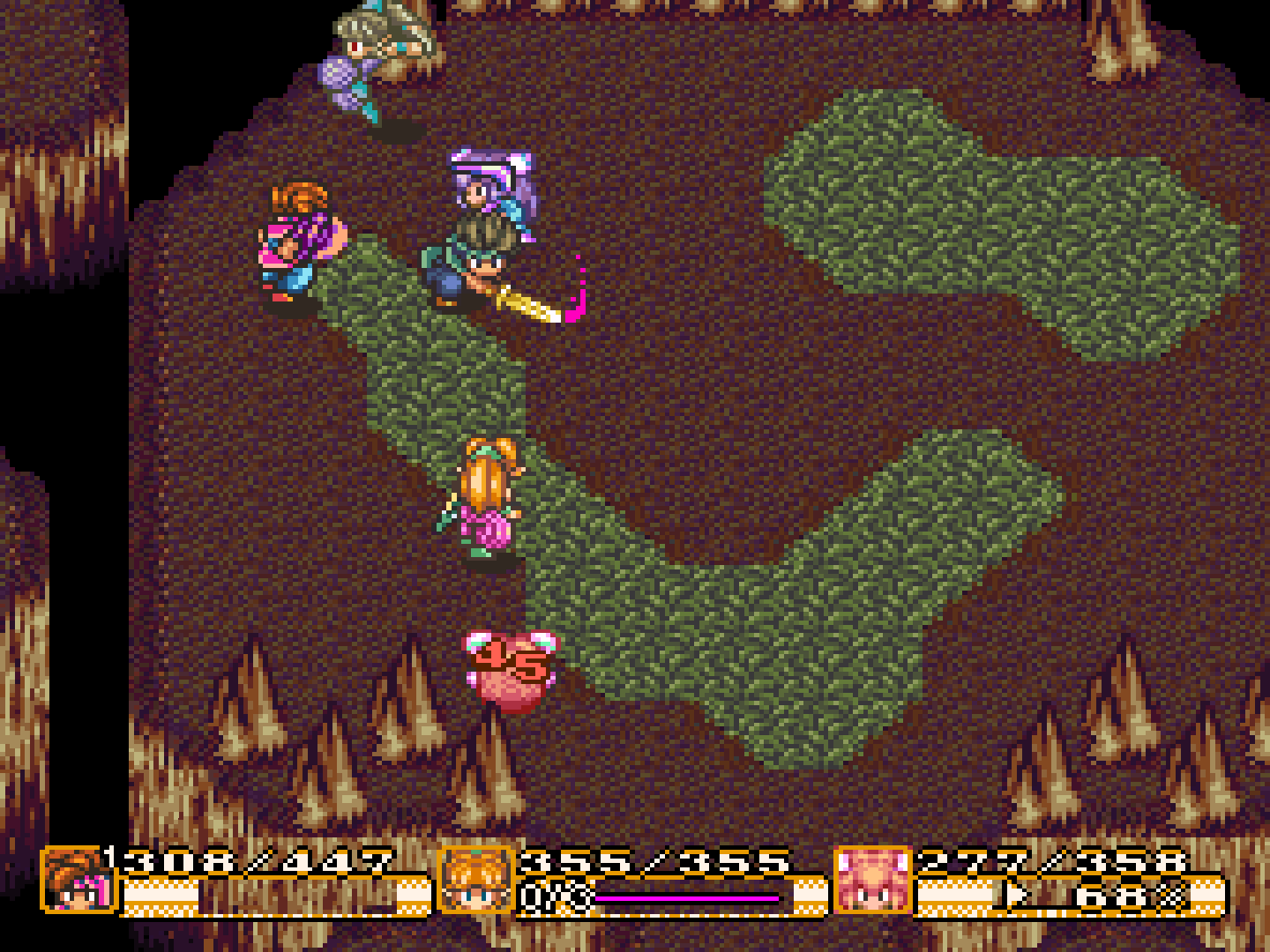 I have Max use his magic on the Shadows, which only does 1 damage!

I accidentally have Hero escape...We can't turn back from this trial, says Jehk.

Our doubles are quick and they guard too well!

Max falls...as does his Shadow!

I have to beware of Shadow!Pidge's spin kicks!

Shadow!Pidge can pull off a Kamehameha charge attack too, huh? 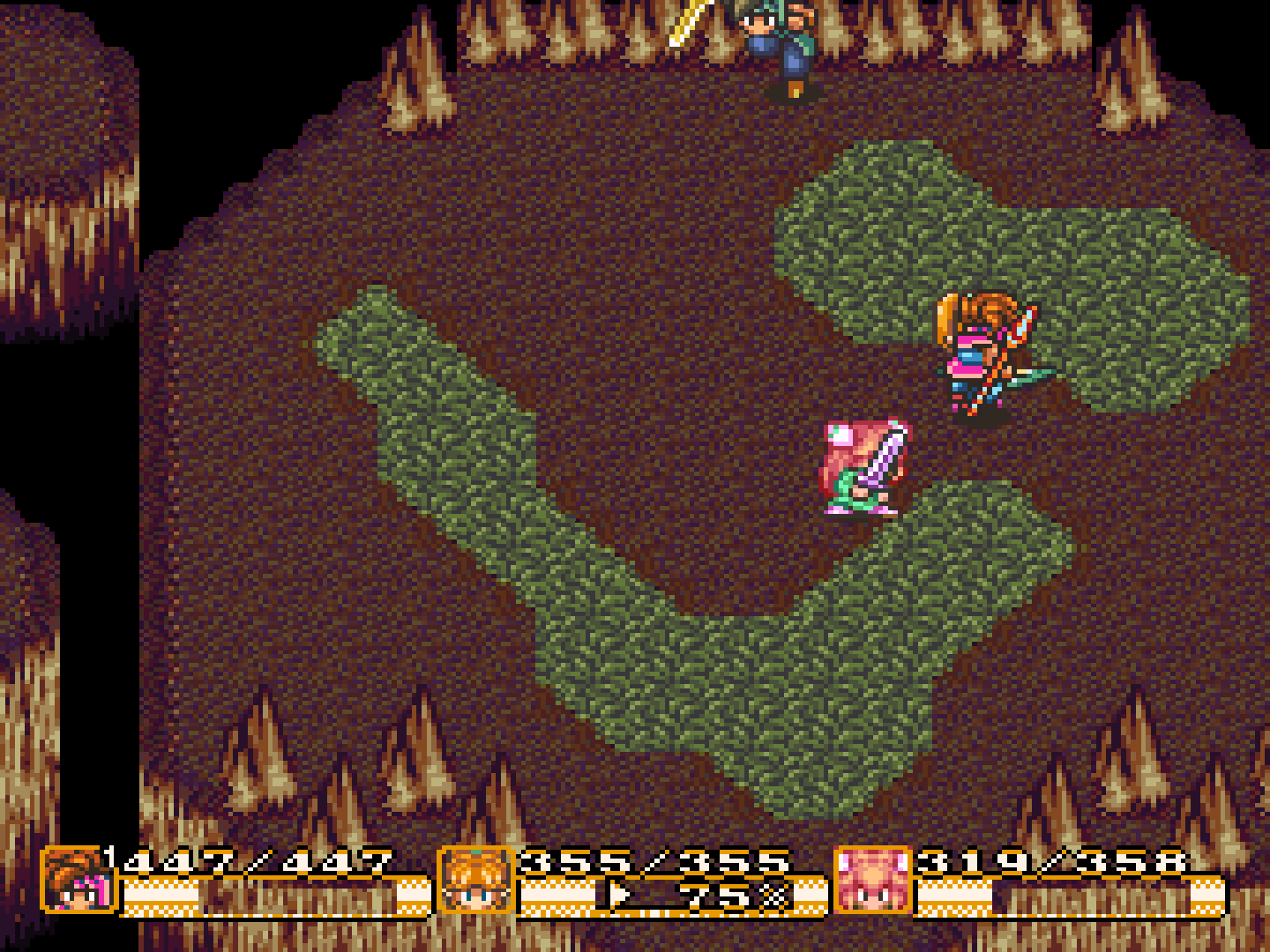 I think I sort of get it! I have to face each one of the Shadows in a certain order. Max first, then Pidge, and Hero last!

Shadow!Hero falls, and after nodding at us in approval, he vanishes!