I forgot to put up the Mana Seeds I've enchanted so far last session, so here they are... 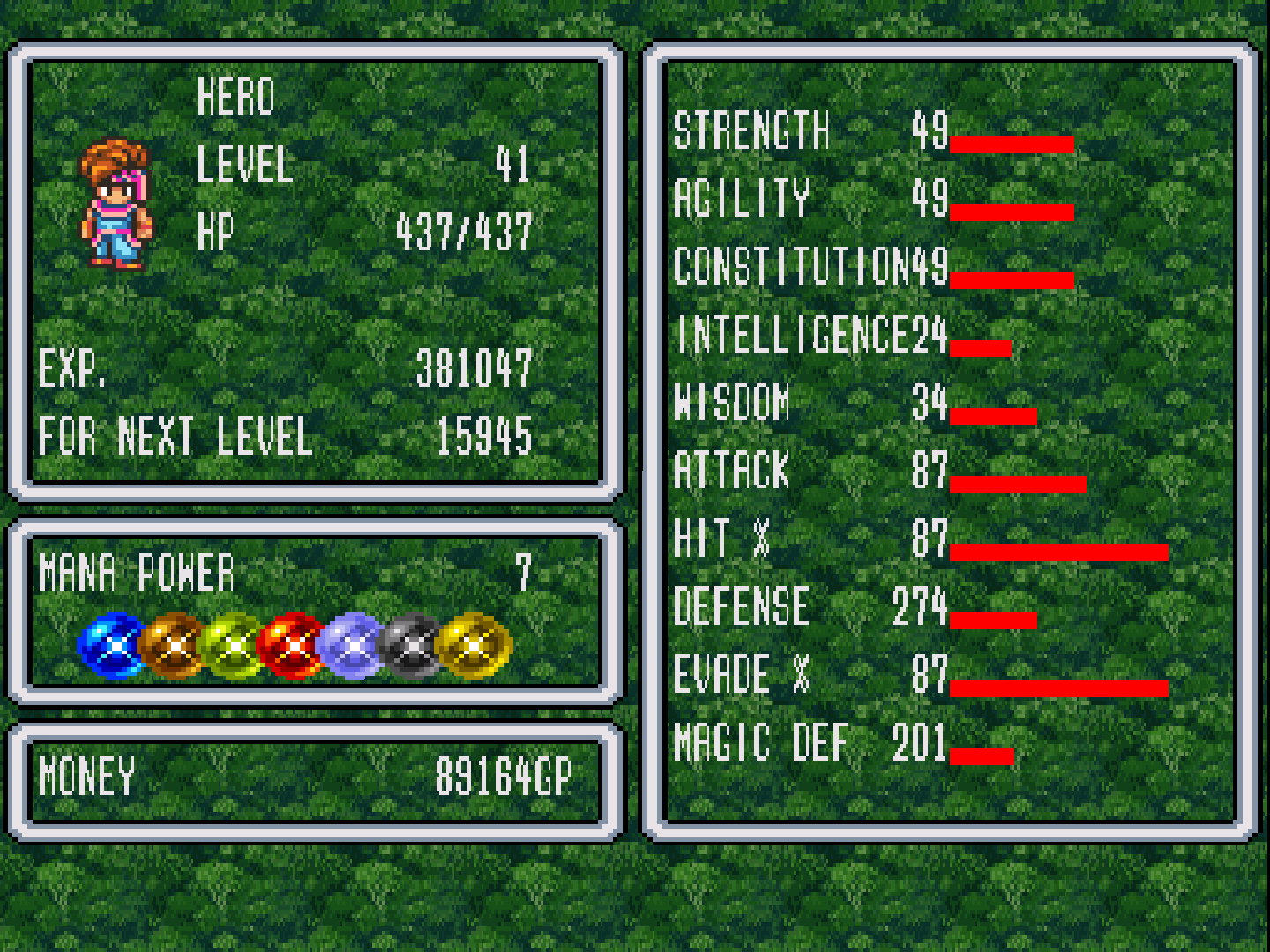 Into the castle of Tasnica we go! 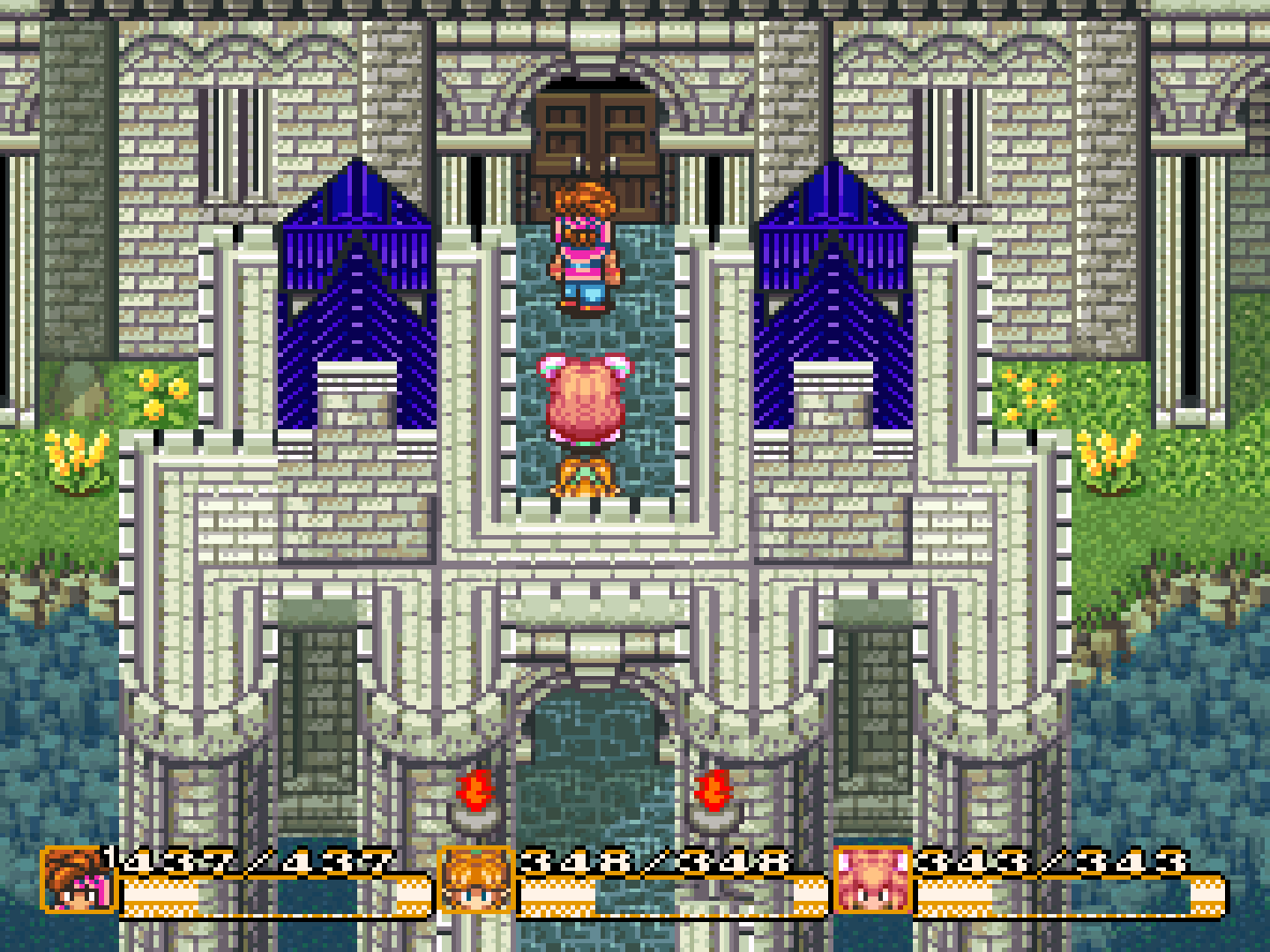 Here's the theme for the Republic of Tasnica. It's the same theme as the sandship.

We find Jema inside, and notes that he "hardly recognized" Hero! Character development yay! 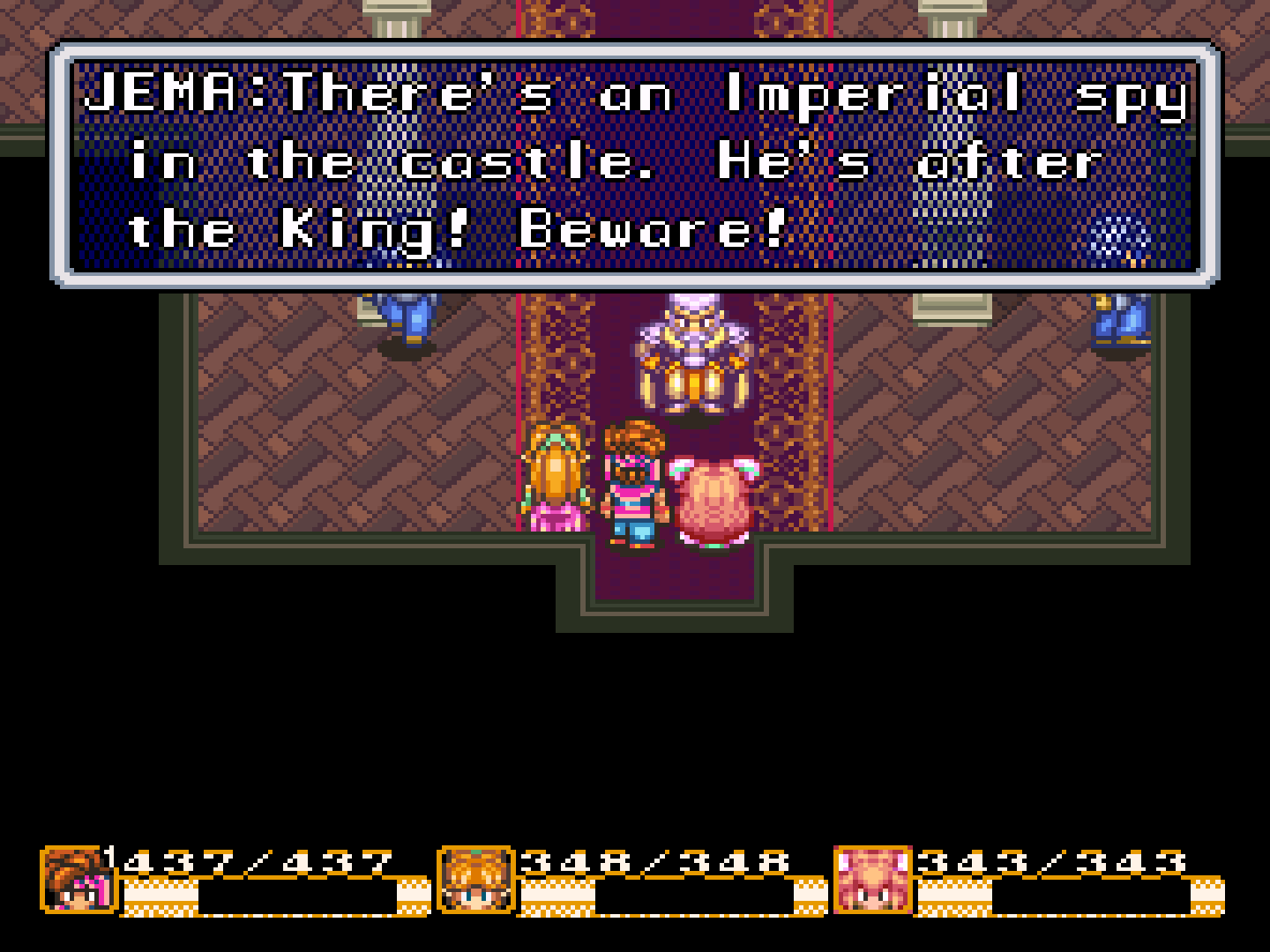 An Imperial spy after the King? I wonder who could it be?

Every guard at the front hall is looking for the spy. I'm more concerned about where Sage Joch is...

Very nice tapestry work at the end of the front hall here.

I go into the small door in the east wing. The guard here is also trying to find the Imperial spy... 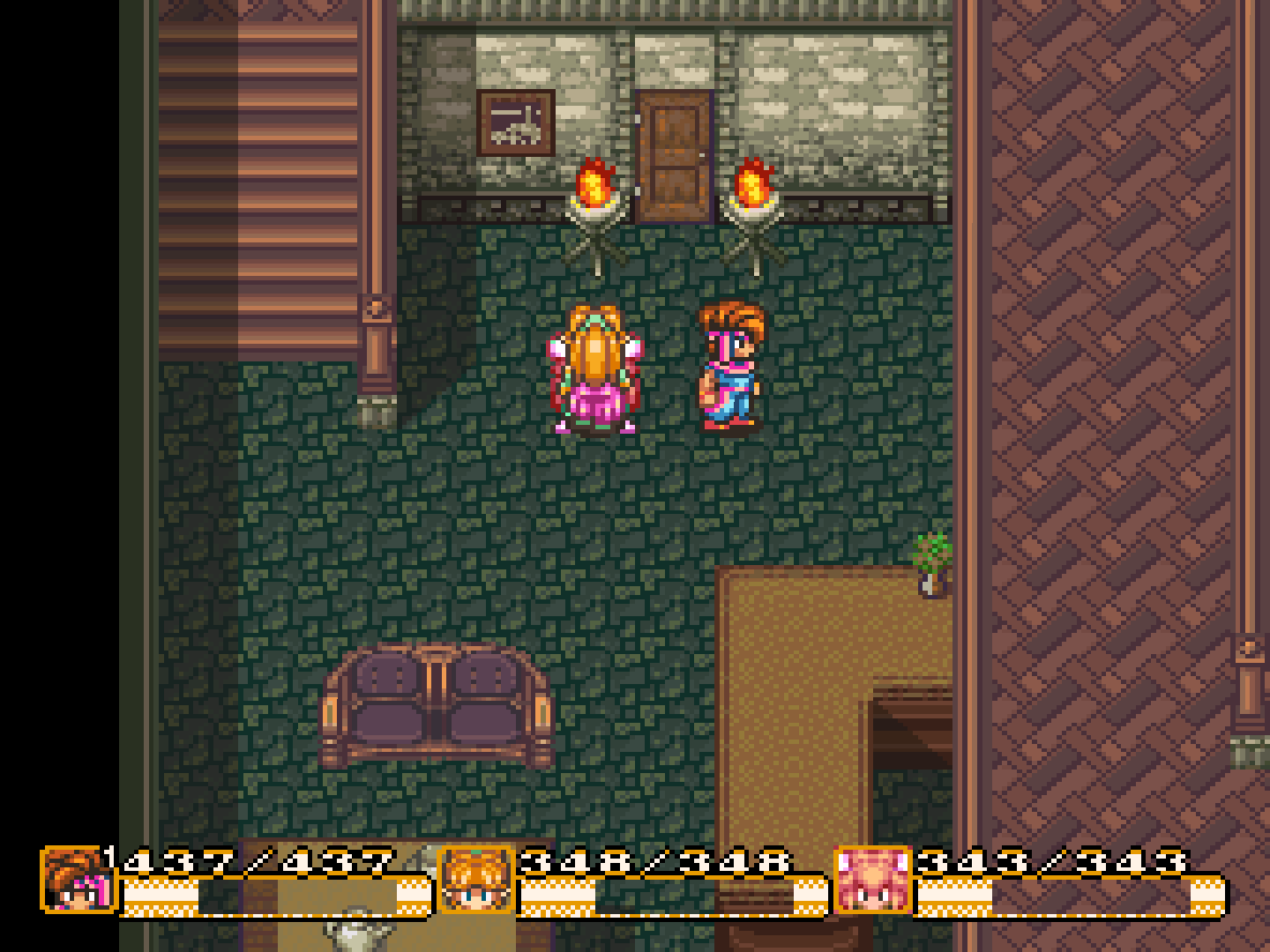 Now to the door northwards, where we're at the grand staircase.

I go to the west hall.

I have some feeling that this castle could end up being a dungeon of monsters soon...

Heading down, I'm back at the front entrance hall.

Now back at the grand staircase, I go into the small room near the west hall. This must probably be the king's quarters... 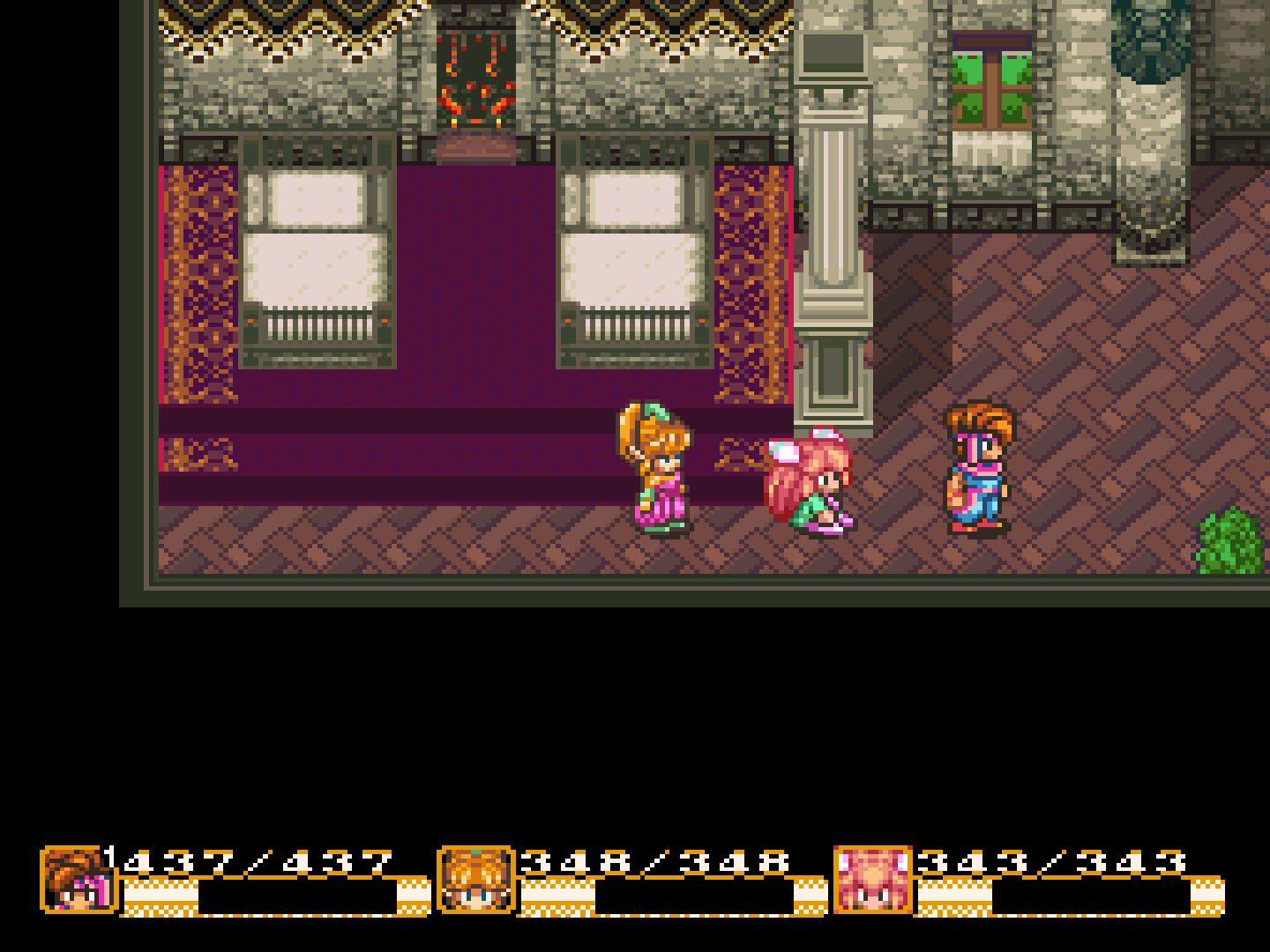 I now go up the grand staircase and into the throne room, where we don't get the most pleasant of welcomes. 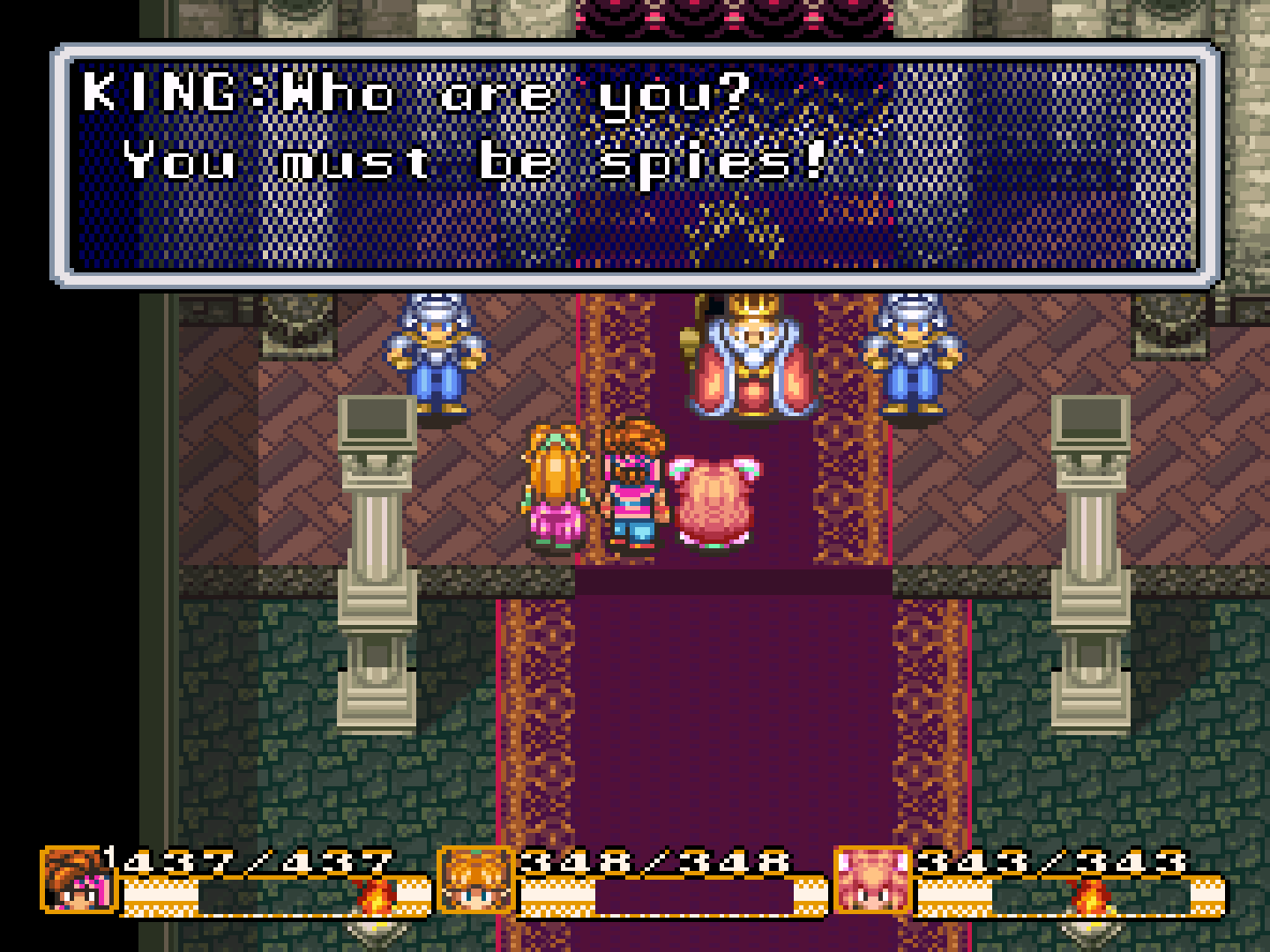 The King tells his guards to toss us into the dungeon!

But a guard notices that the King is an impostor! The Imperial spy is posing as the King! 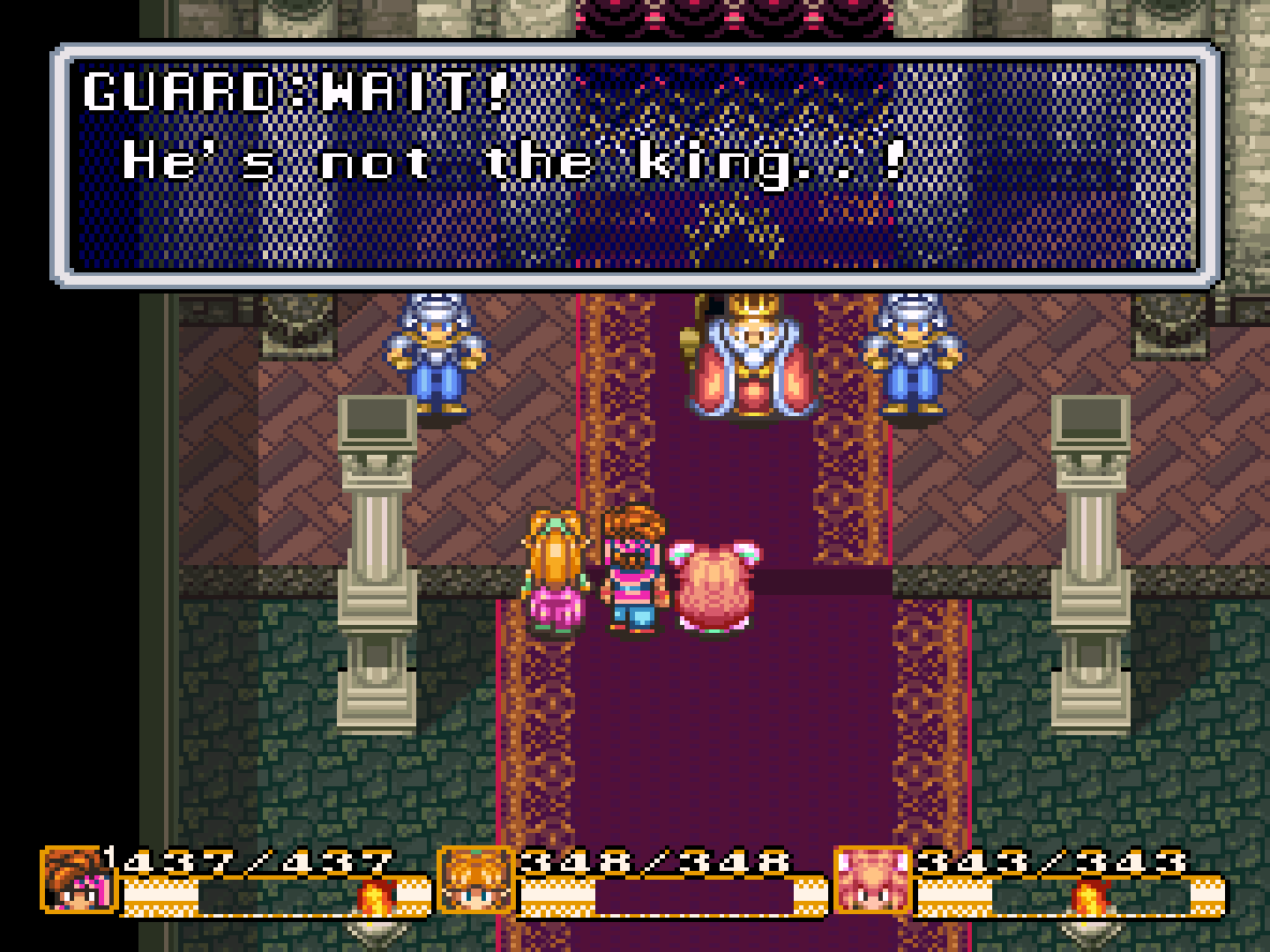 The King impostor has his back towards us, knowing his plan is ruined... 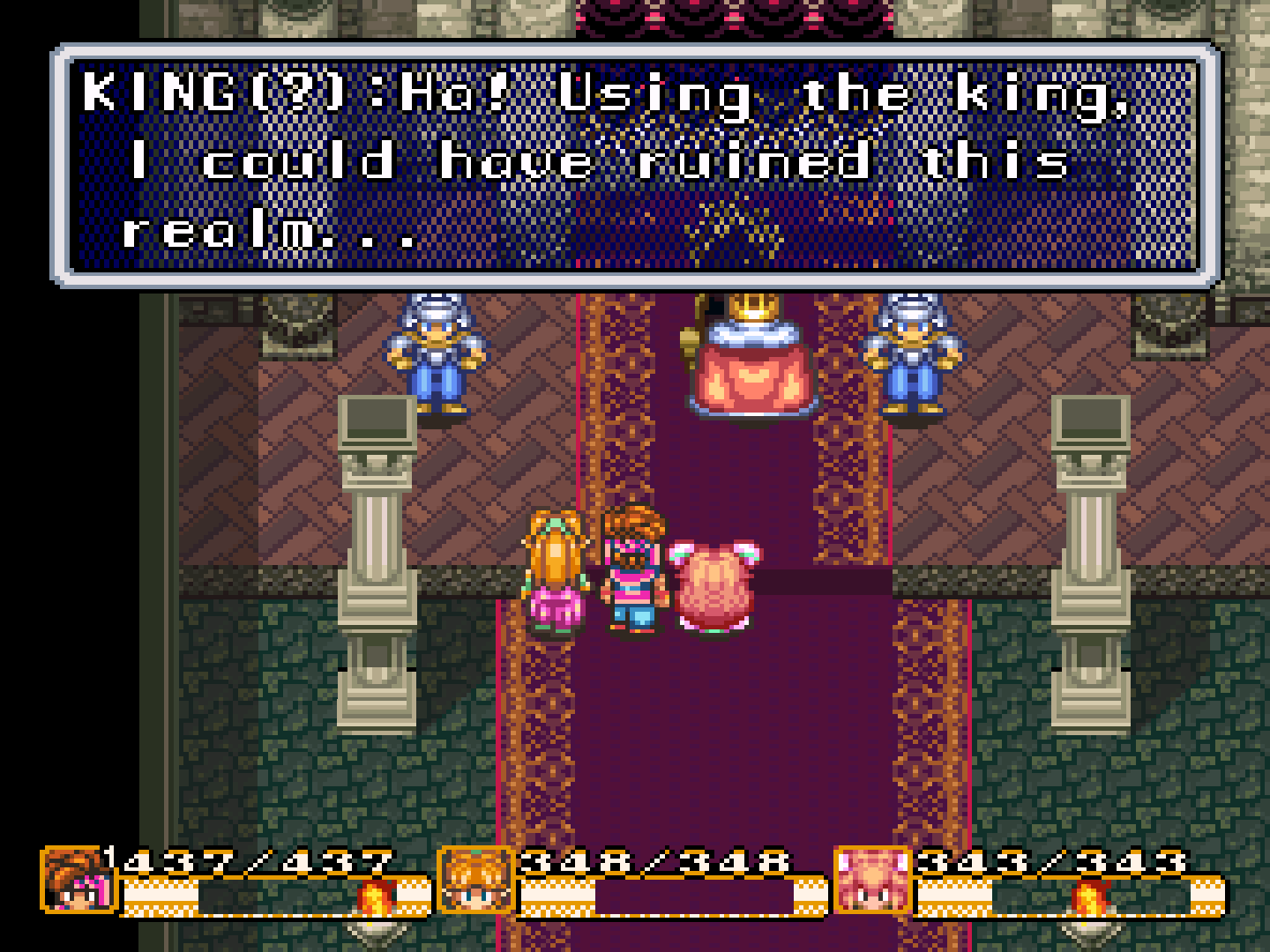 He vanishes all the guards! 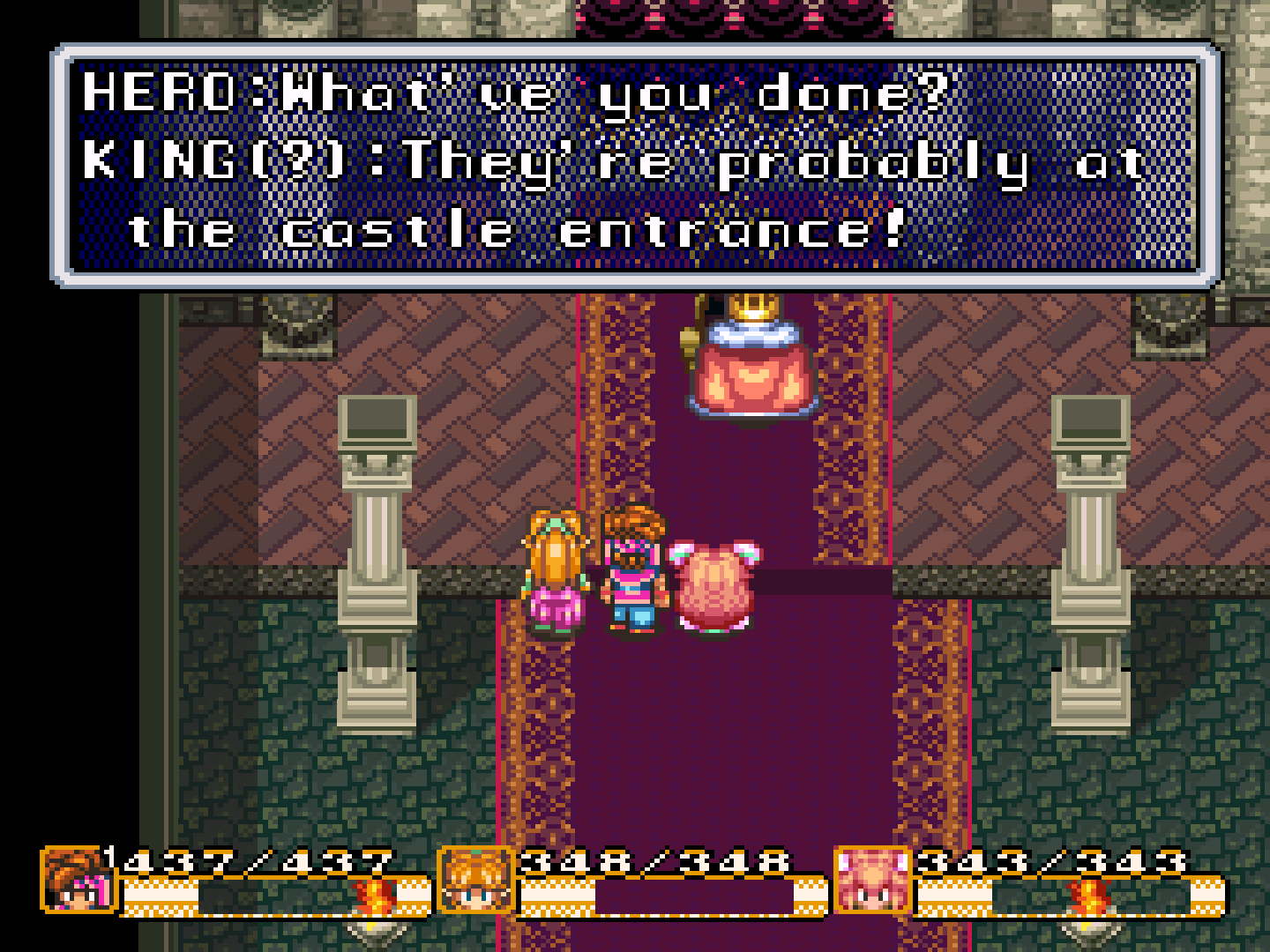 Now we have to face another boss!

The King Impostor summons a ninja clad in black, the Dark Stalker! 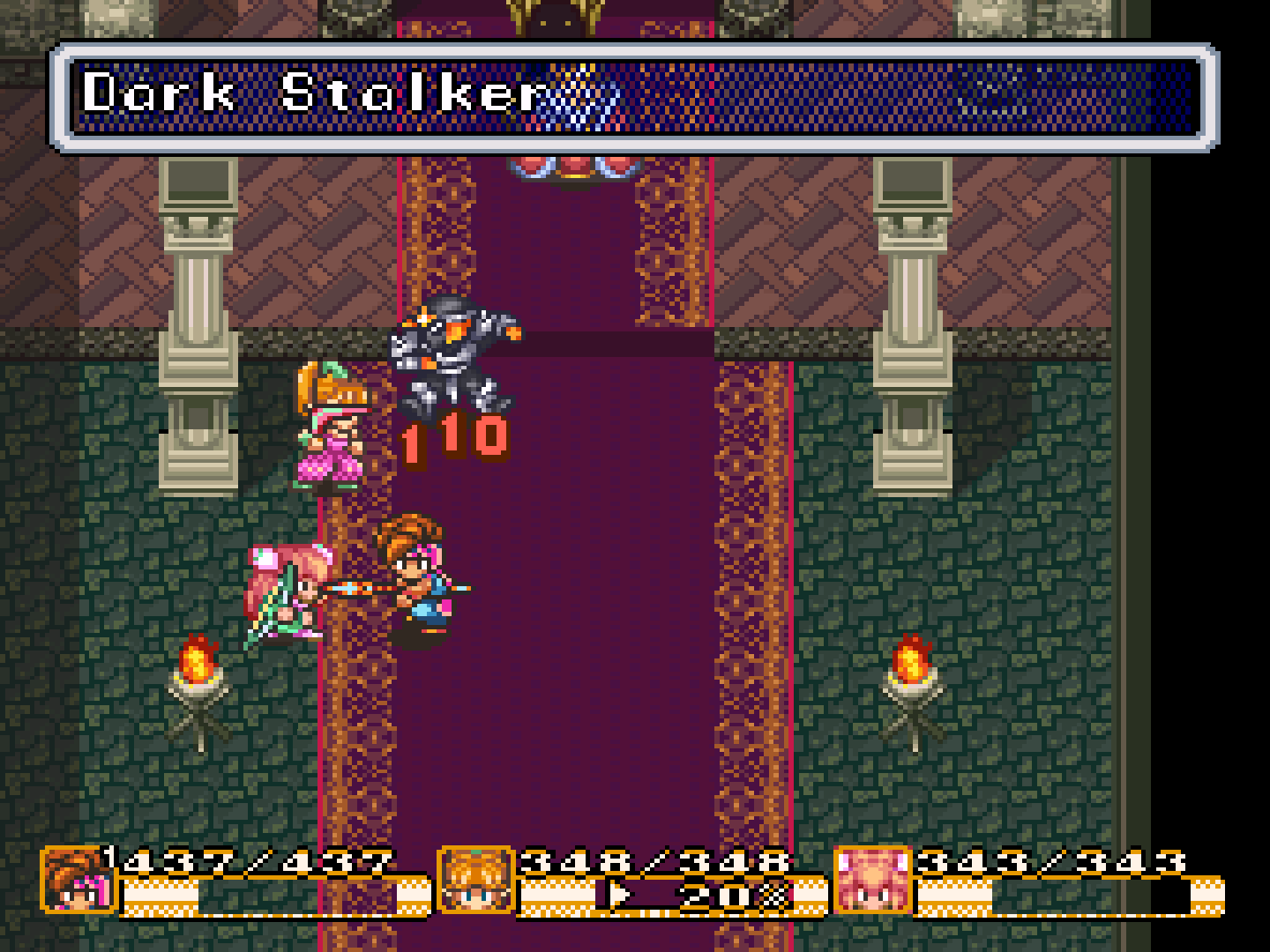 The Dark Stalker imbues his weapon with ice!

But we take care of him easily with a Lucent Beam!

We wake the King up from his manipulation by the Imperial spy!

I talk to the guards. One guard mentions that the navy of Tasnica is all but spent, the only ship available is the sandship. Another mentions that Jema was a leading commander for Tasnica. 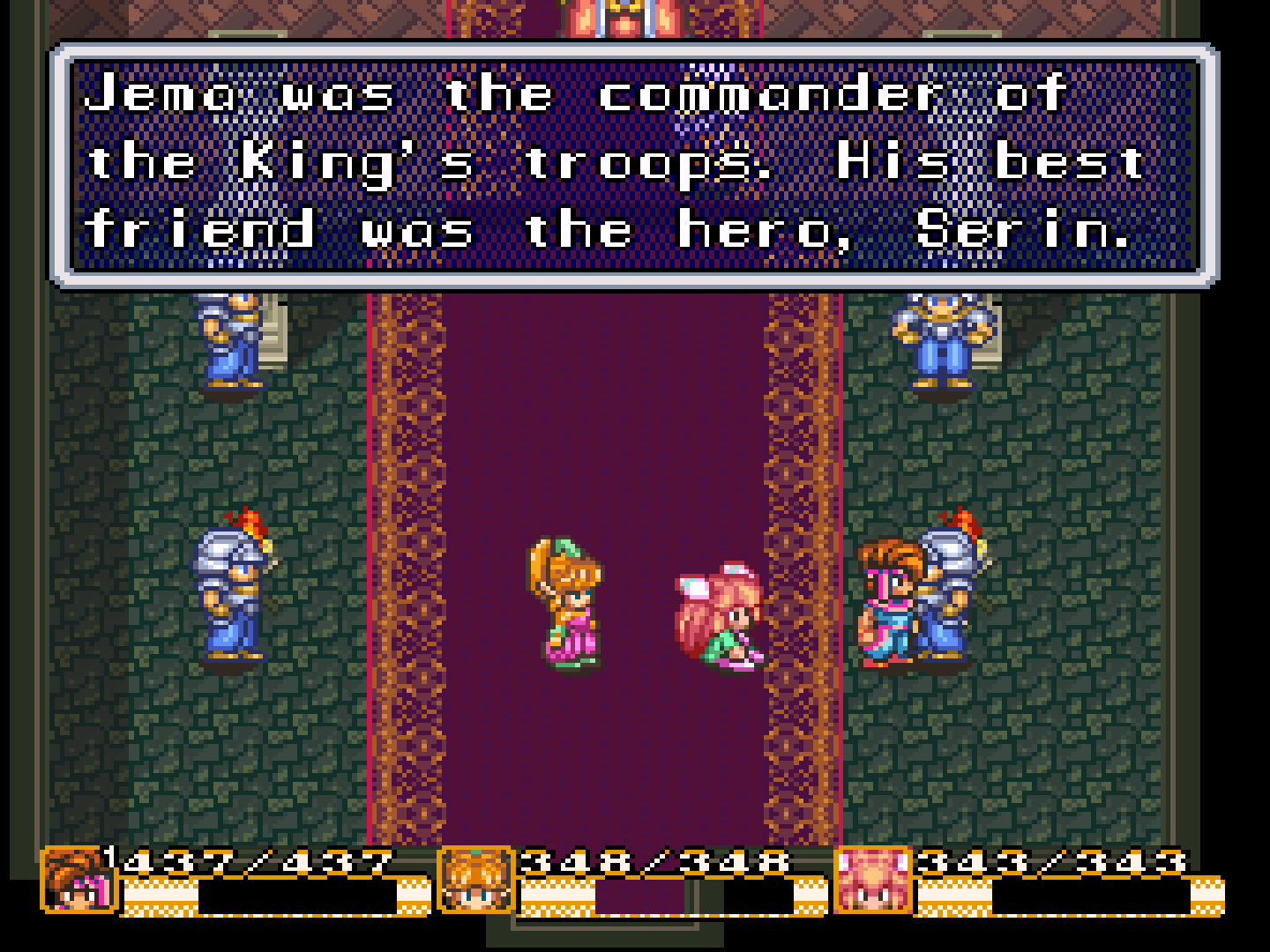 I'm thinking Serin might've been the previous hero that wielded the Mana sword, and probably the ghost that Hero met that told him to take out the sword.

So after the death of Serin, Jema retired...

Jema: "Well done! Your Highness, Hero has beaten the spy."

The King is still in slight disbelief at Hero's skill. 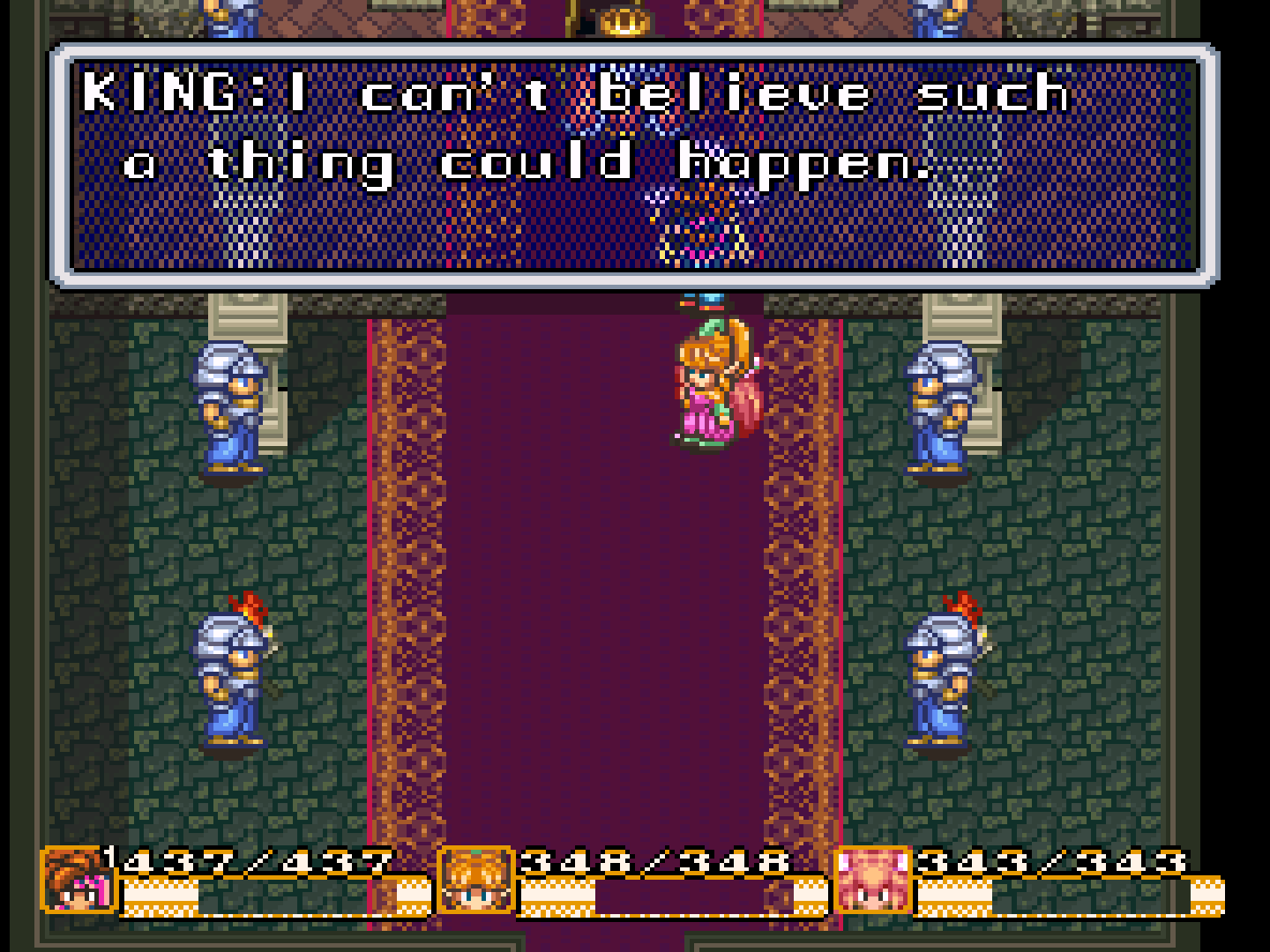 But he's not worried anymore after Hero took care of the Imperial spy.

He rewards us with a Sword's Orb!

More info from the other guards flanking the King that I know about already...that the Dark Stalker's emitting something evil, and that Pandora and Tasnica are allies.

We speak to Jema again.

Jema: "You have learned much, but you can't rest yet. You still have to learn what true courage is."

The party nods. What Jema says next isn't good. 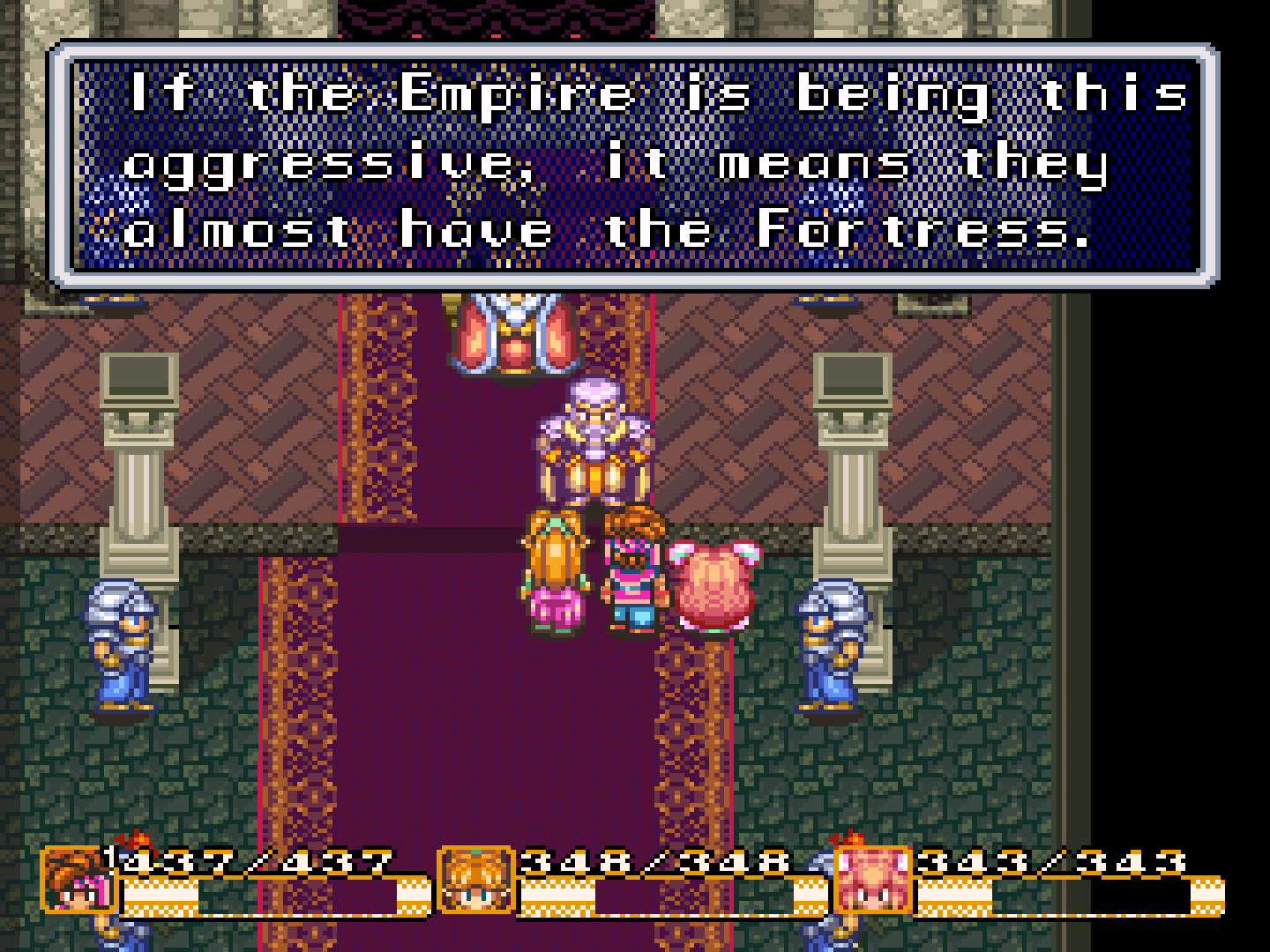 Jema: "If the Empire is being aggressive, it means they almost have the Fortress. I'm off to fight the Empire wherever I can. You must find the Sage Joch. From him, you'll learn true courage."

Where is the Sage, though?

He leaves the throne room.

We talk to the King next.

The King tells us that Jema's "studying the power of Mana."

From one guard at the foot of the staircase, he states that the Empire and Republic are getting closer to war...

Another guard tells us that Jema and Serin were the best warriors of the land.

An old woman with green hair knows Hero from somewhere before...

Most of the civilians are back in the castle now.

Another man at the entrance hall tells us about the Empire's next move. 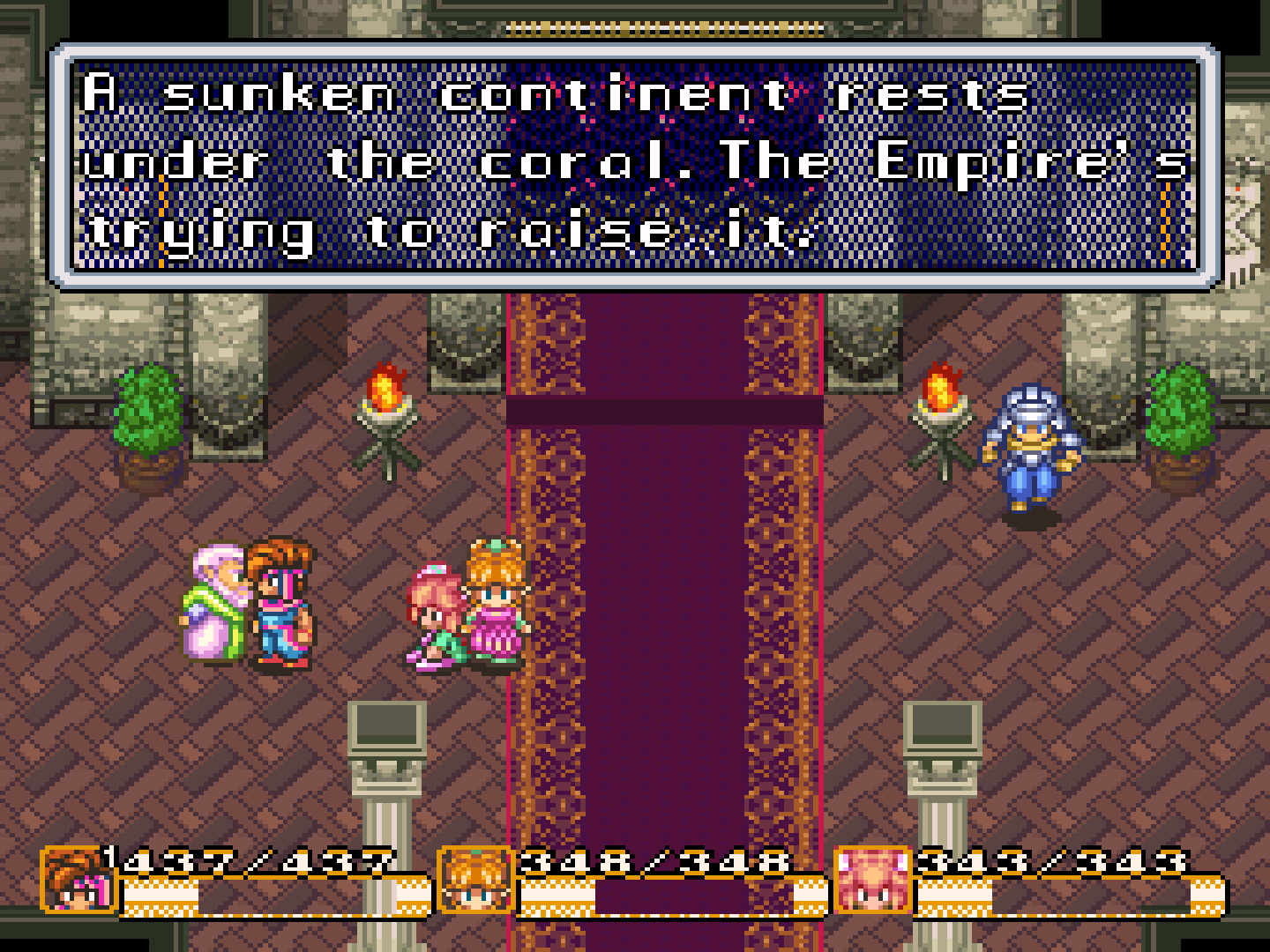 I'm guessing that sunken continent must be where the Mana Fortress is...

Man: "Only the world's Mana Seeds, which seal the continent, stand in their way."

A girl points out Max as "tiny", and Max calls her the tiny one!

Now that everything here's settled, I head back to the Lofty Mountains and see if Sage Joch is in his cave.