The knight confirms that we pulled out the real Mana Sword. Hero's a bit shocked by the news. 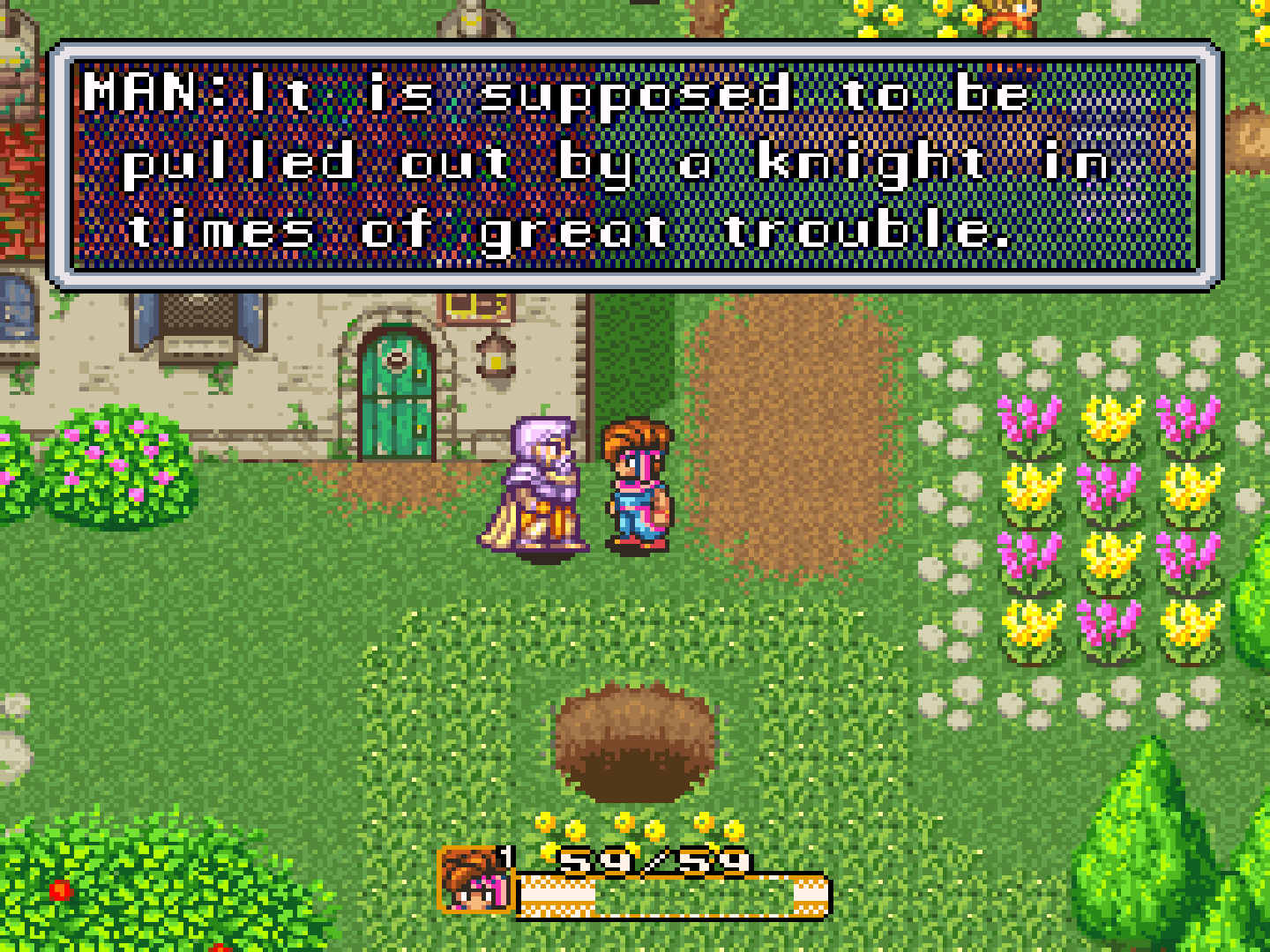 But he calls Hero too young to wield it. What an ageist this guy is!

Hero offers him the Mana Sword.

The knight refuses to take the sword, saying it needs to be "re-energized." He says the only person who pulled it from the rock is the one able to recharge it.

The knight tells us to visit Sage Luka in the Water Palace, knowing that she might have some tips on how to recharge the sword. 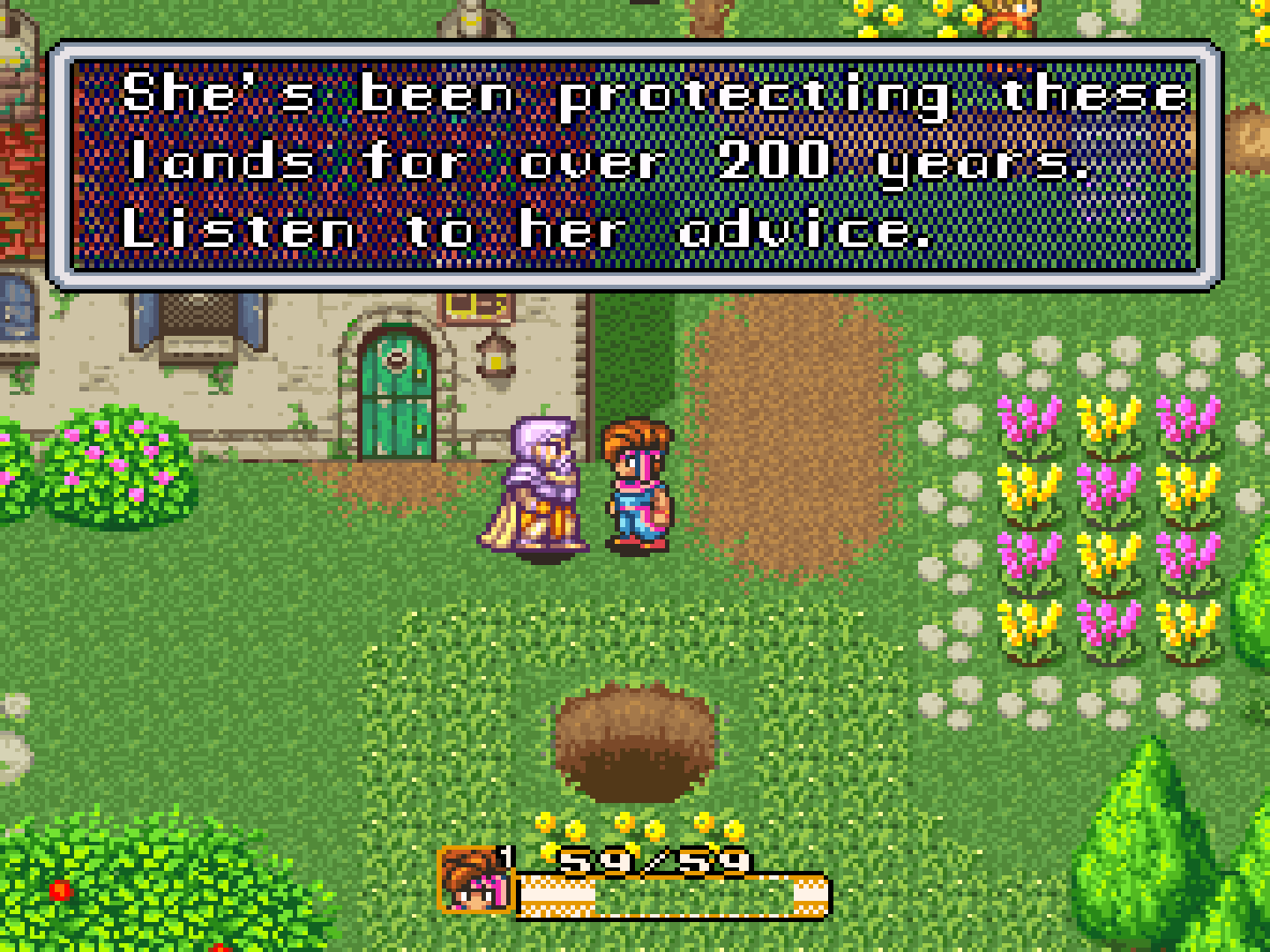 Timothy calls to hero that the Elder wants to see him! Oh dear...

The knight, Jema, tells Hero that he'll be waiting in the Water Palace.

I navigate the menu a bit more, and get some more stuff from the shop (but can't), and save before visiting the Elder.

Inside the Elder's house, more villagers send their complaints about the monster attacks...

After noticing us, the Elder brings up the monster attacks, all caused by the Hero pulling out the sword! 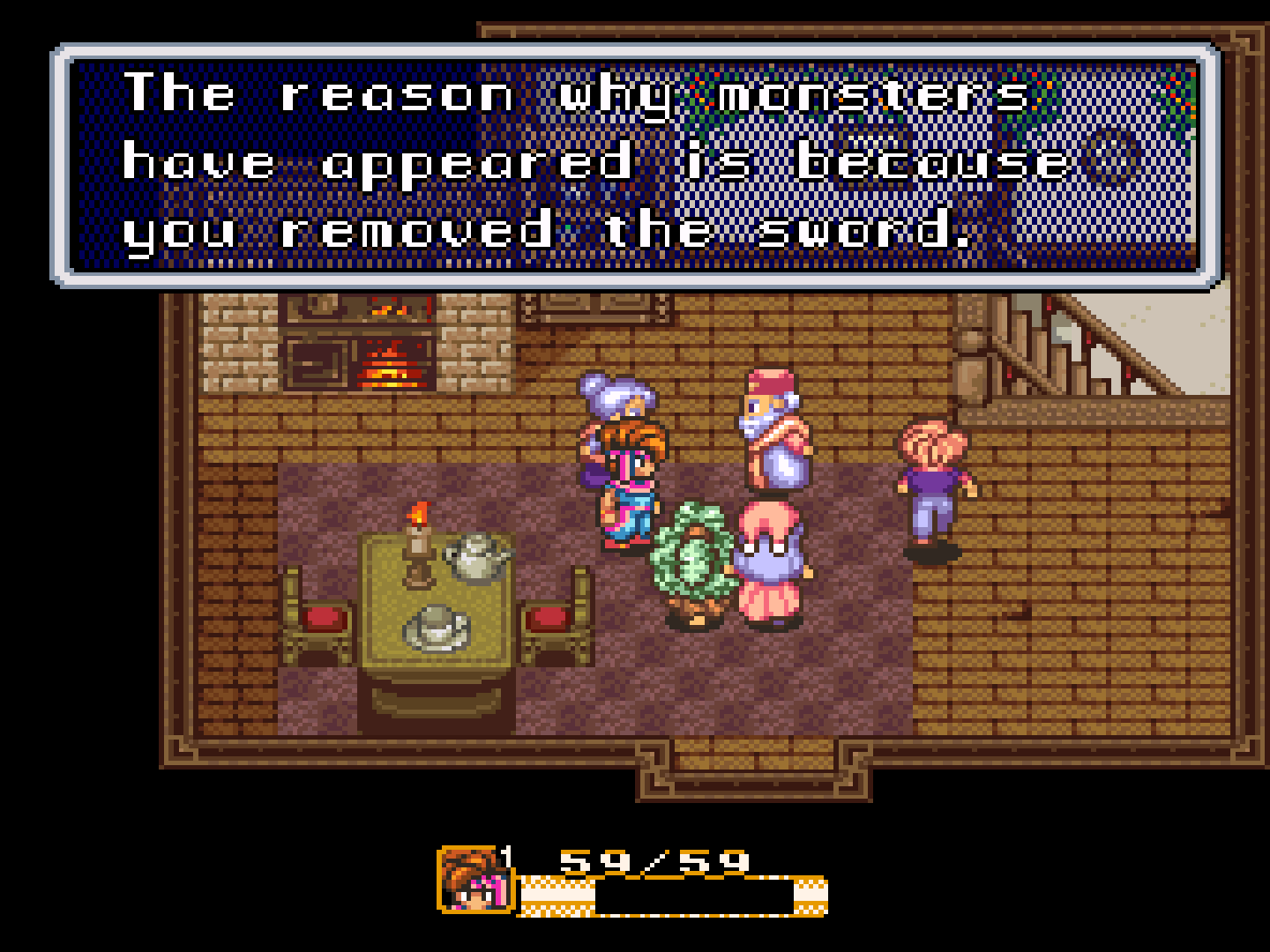 Since he carries the Sword, which attracts the monsters, the villagers make their decision: to banish Hero.

The Elder makes his final decision as well, with sadness, and formally banishes him from the village. As a parting gift, he tells us to take whatever's in the chest downstairs.

A kid downstairs gives us farewells too... 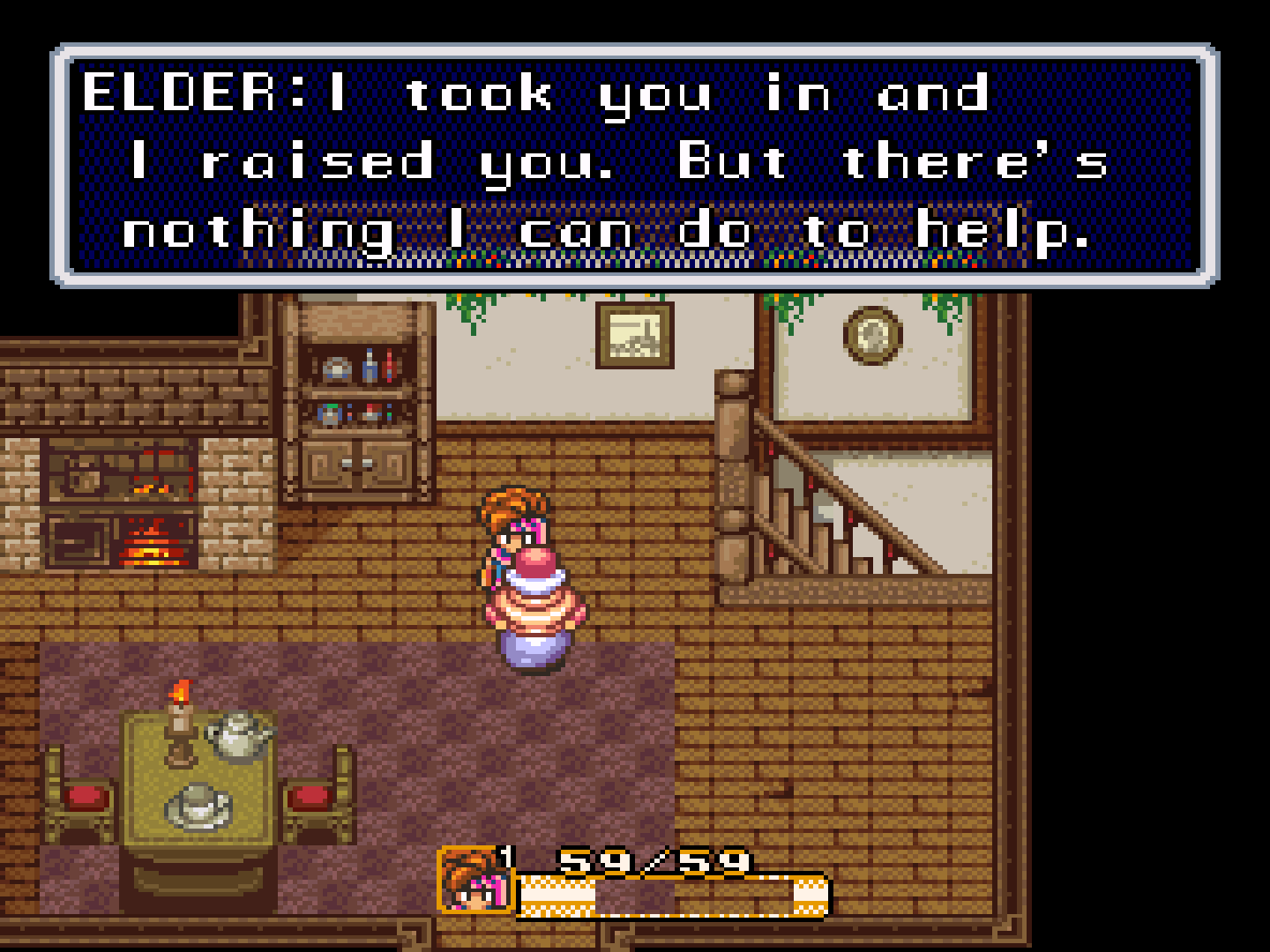 So the Hero was adopted by the Elder, huh?

Elder: "Please forgive me. I know I've told you this before, but...your mother broguht you to this village when you were just a baby. Soon afterwards, she disappeared...I took you and have done my best to raise you. But now we must part." 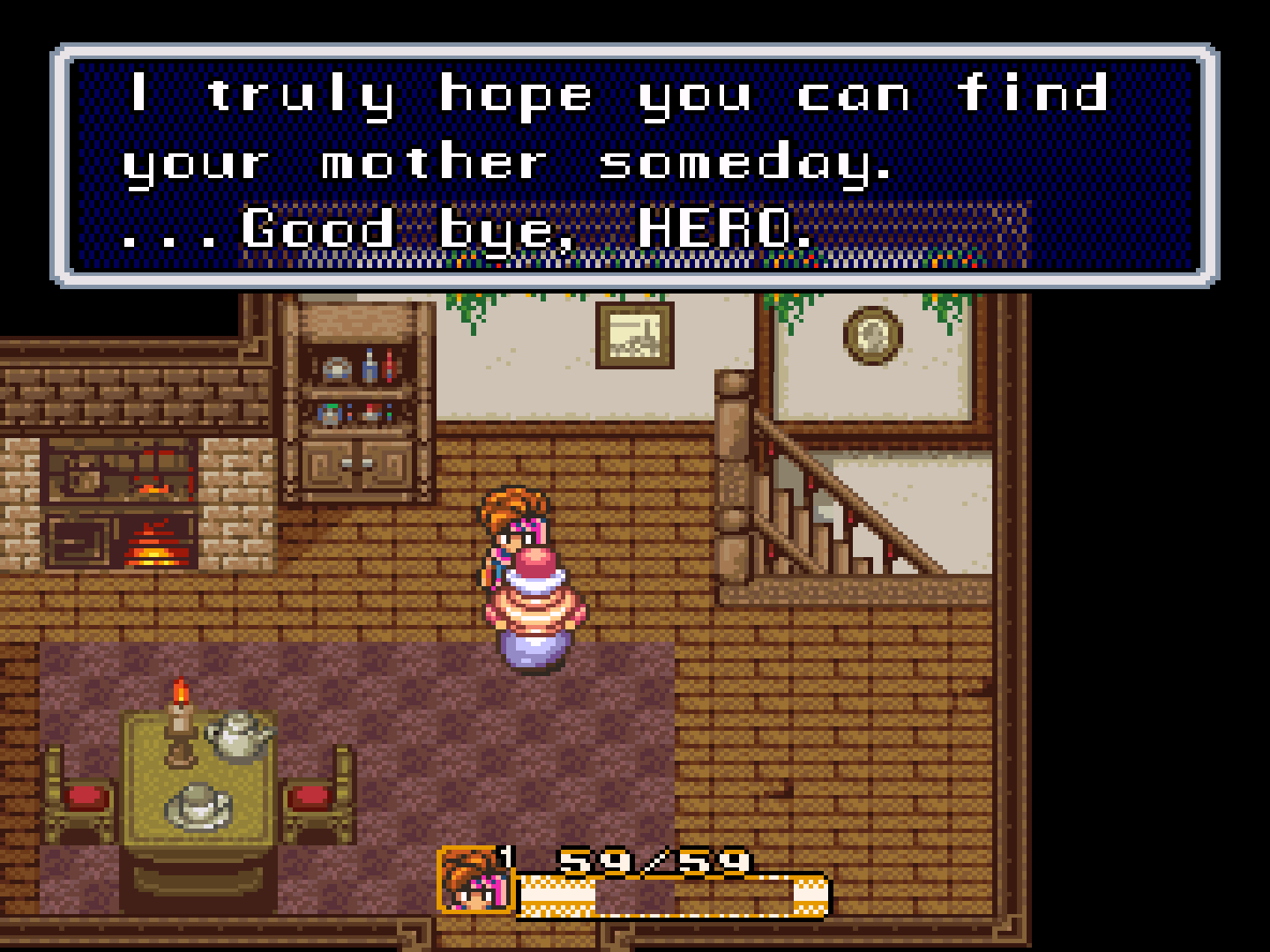 Elder: "I truly hope you can find your mother someday...Good bye, Hero." The shopkeeper's only selling Hero stuff because the Elder ordered him to...

I'm betting the gatekeeper's wanting for us to leave asap too...

I save and stop my session here.

Well, that escalated quickly! The main character's banished from his village in the first moments of the game! Comparing this game to Alundra, the citizens of Inoa are way more friendlier than the ones in this village.