I unlock the tower using the key Mara's husband stole. 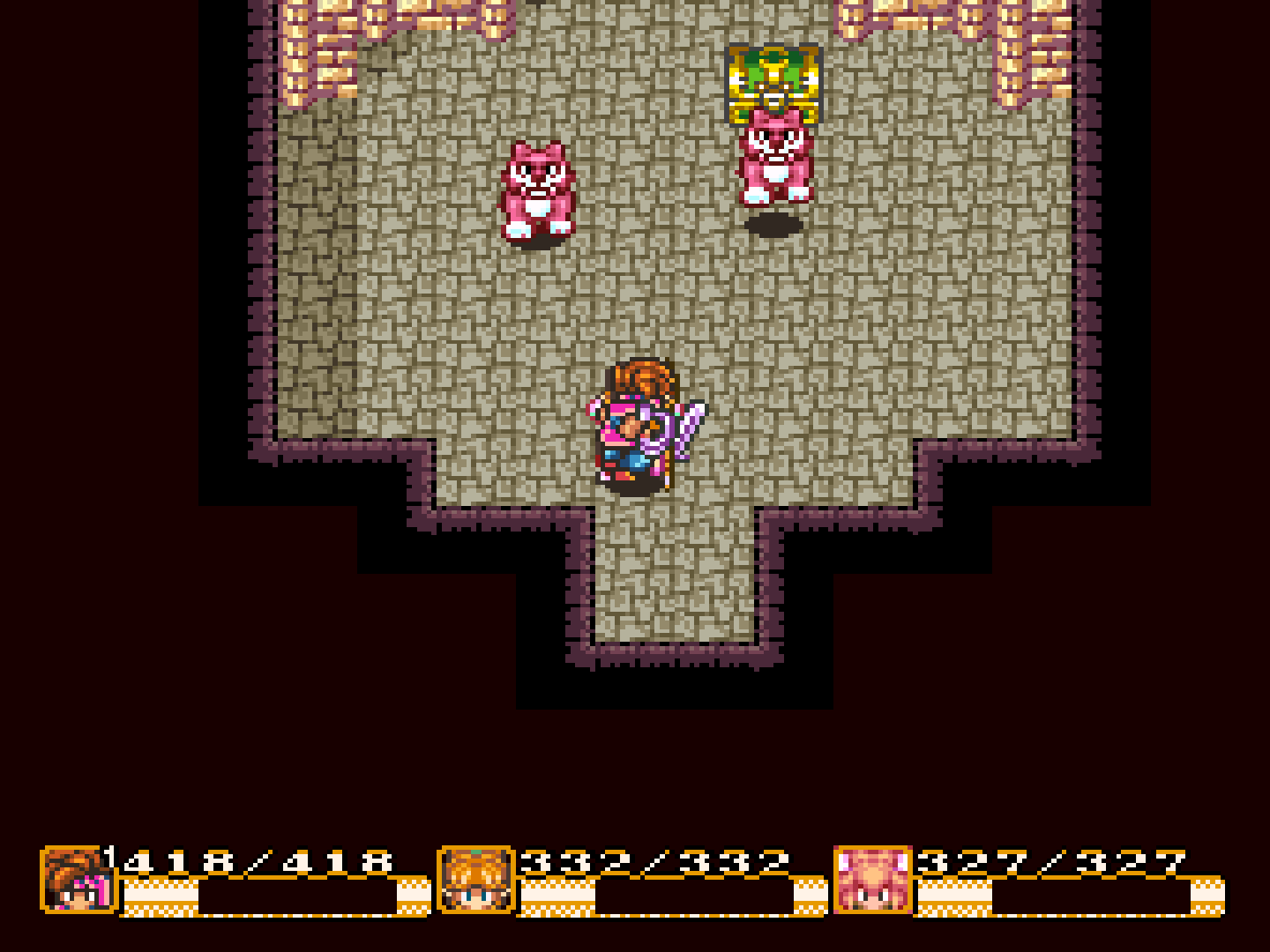 Two Beast Zombies jump at our arrival! They can also cast level 7 spells!

Noticing the chest, I open it, giving us another upgrade for our Spear! 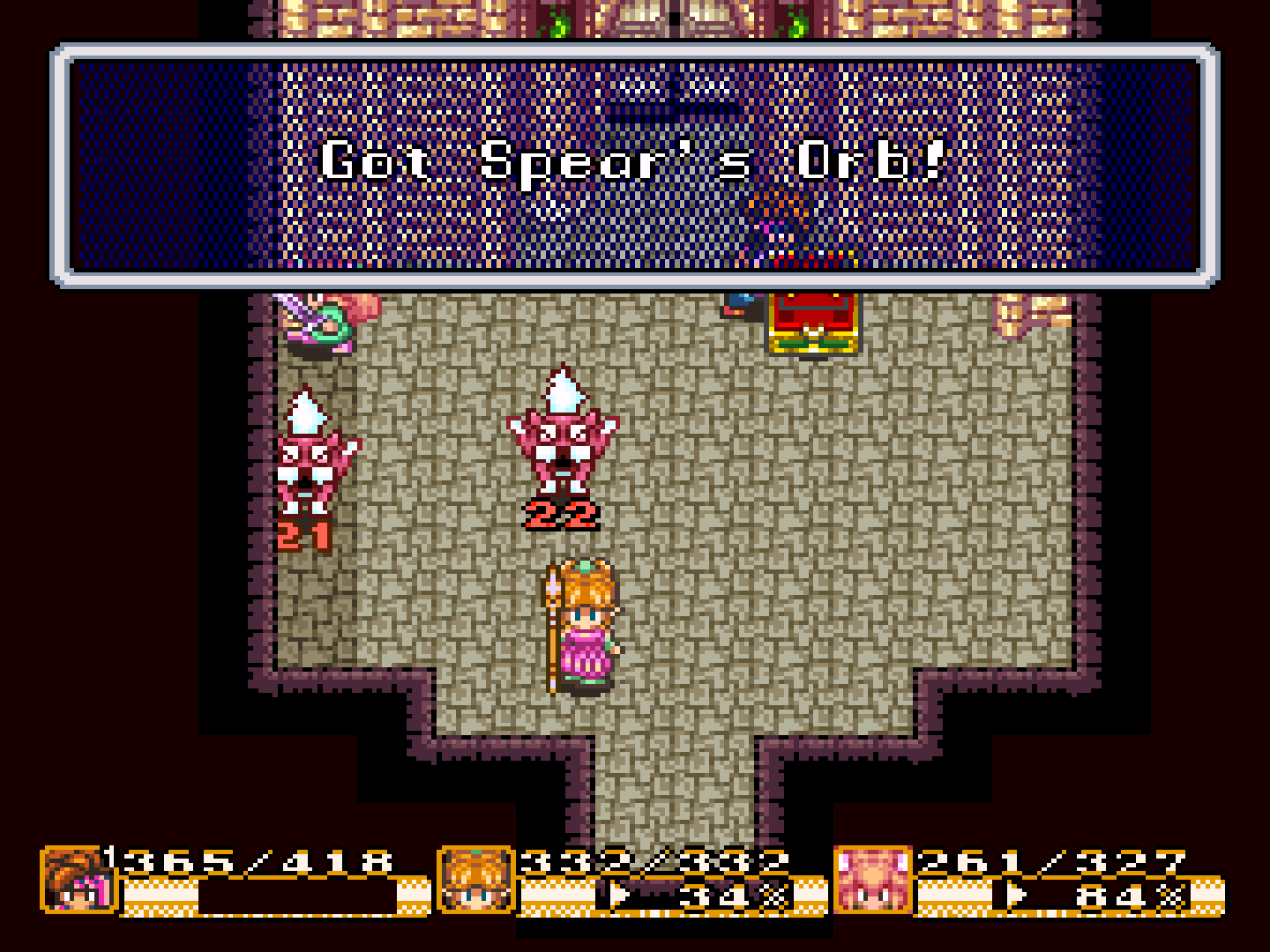 After fighting off the beasts, we proceed onward. 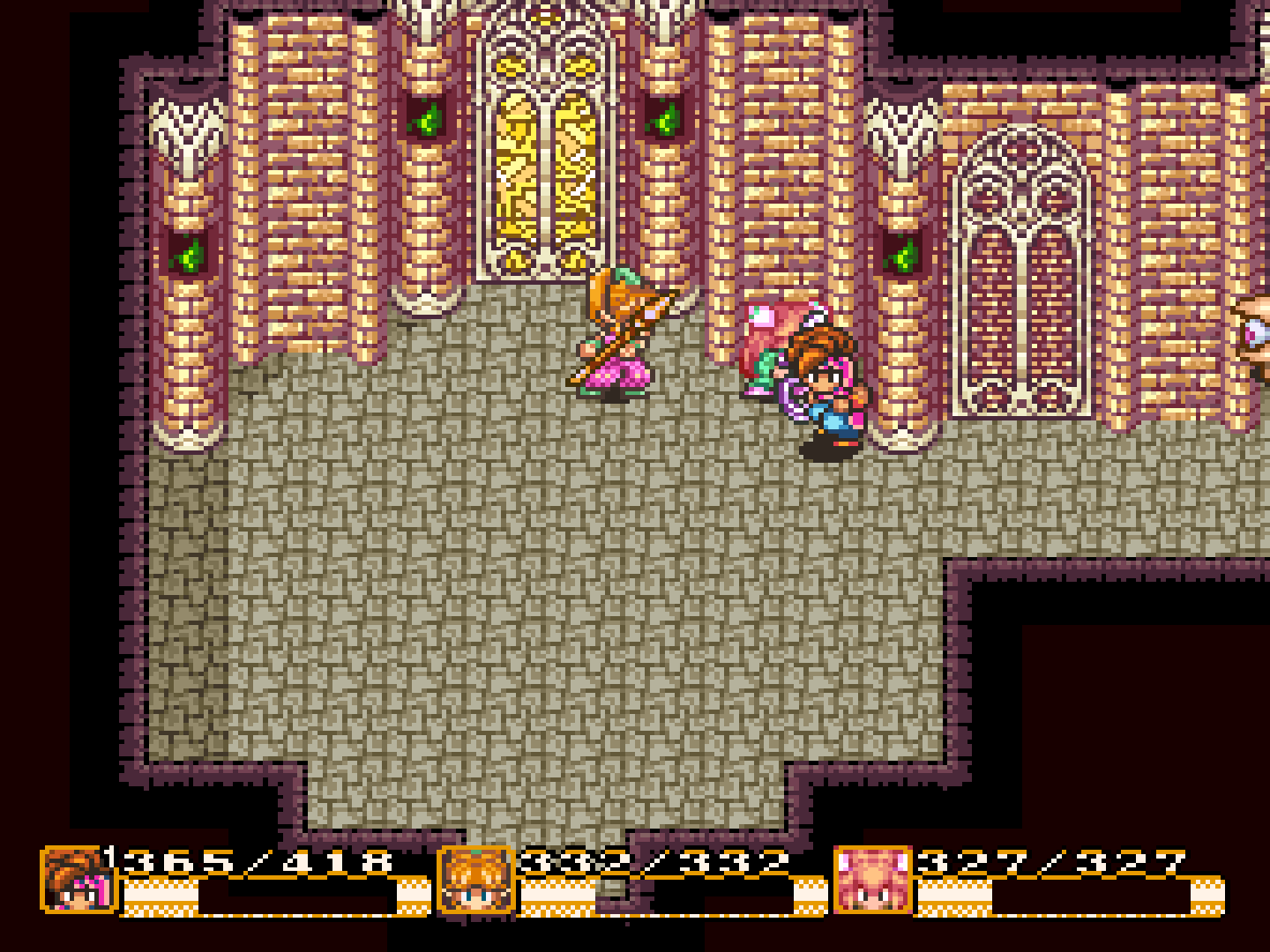 It's a who's who of familiar enemies here...

I try the Dispel Magic on a number of enemies just to boost Max's dark magic skill level.

I should've known from the name Beast Zombie that this enemy does not like light magic! Plus, he's resistant to Max's Dark Force spell!

We open the door south, and after a small battle with another Beast Zombie, we climb the stairs....

The danger music plays and we're greeted by the Spikey Tiger's cousin, the Blue Spike! 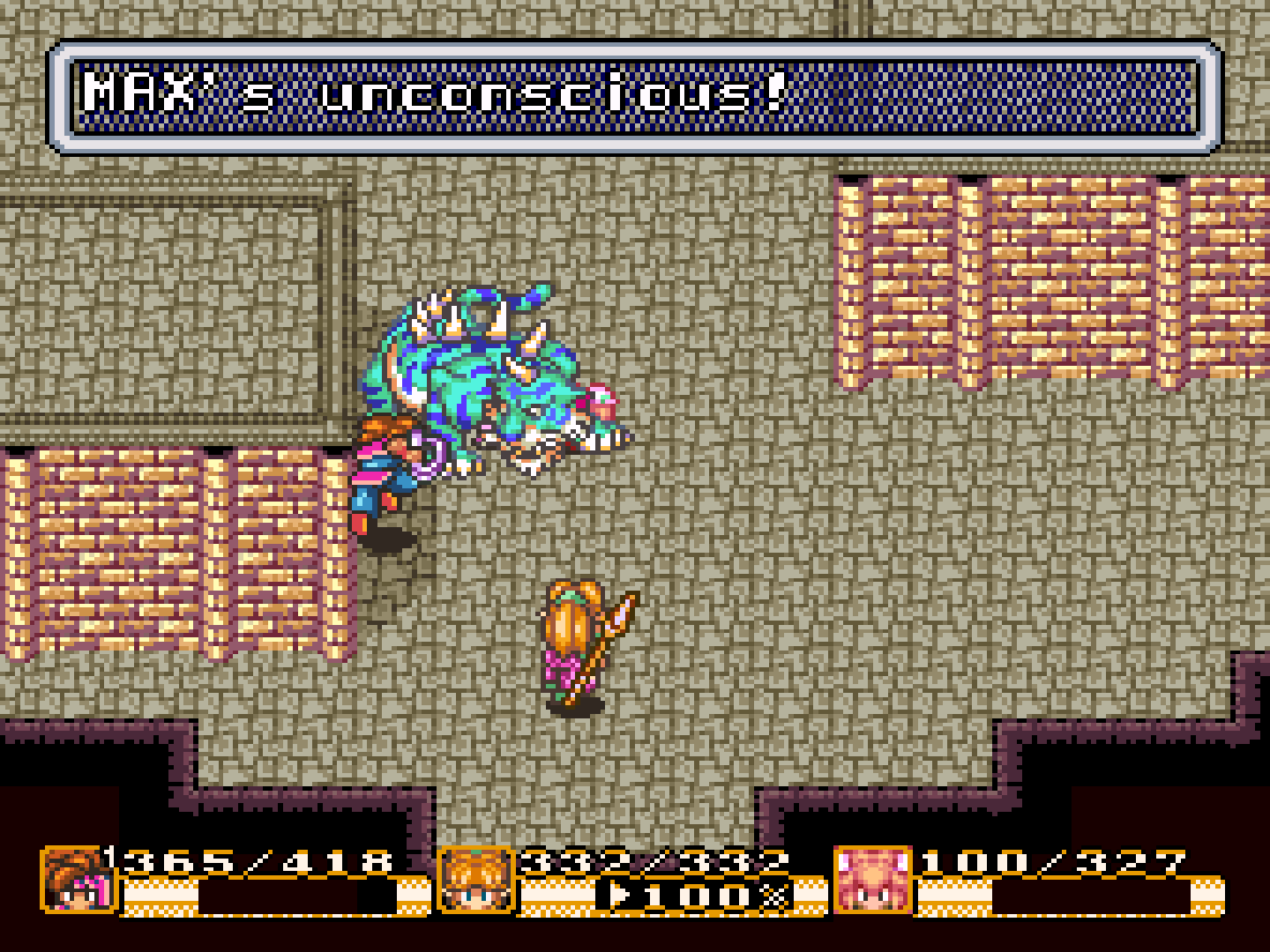 Max almost died but Pidge's cure spell recovers him before he could be taken in by the reaper!

Now the blue tiger rolls out to escape danger!

The Blue Spike uses a Moogle Glare! Oh no!

Another one of the Blue Spike's tricks is blowing Acid Bubbles!

I use every elemental spell in Max's arsenal on the boss!

The Blue Tiger's resistant to wind and dark magic...

I chain Pidge and Max's fire spells. It seems to work, but the tiger leaps out from higher ground.

He leaps back to another platform again and it's a spellcasting duel between Max and the tiger!

Undine's magic seems to work on the boss...

And the Blue Spike casts Fireballs on Hero!

He manages to turn Max into a Moogle but not before taking a Freeze spell from him!

The fireworks begin for the boss!

He rolls out down to our level, and I continue spamming Freeze and physical attacks on the tiger! 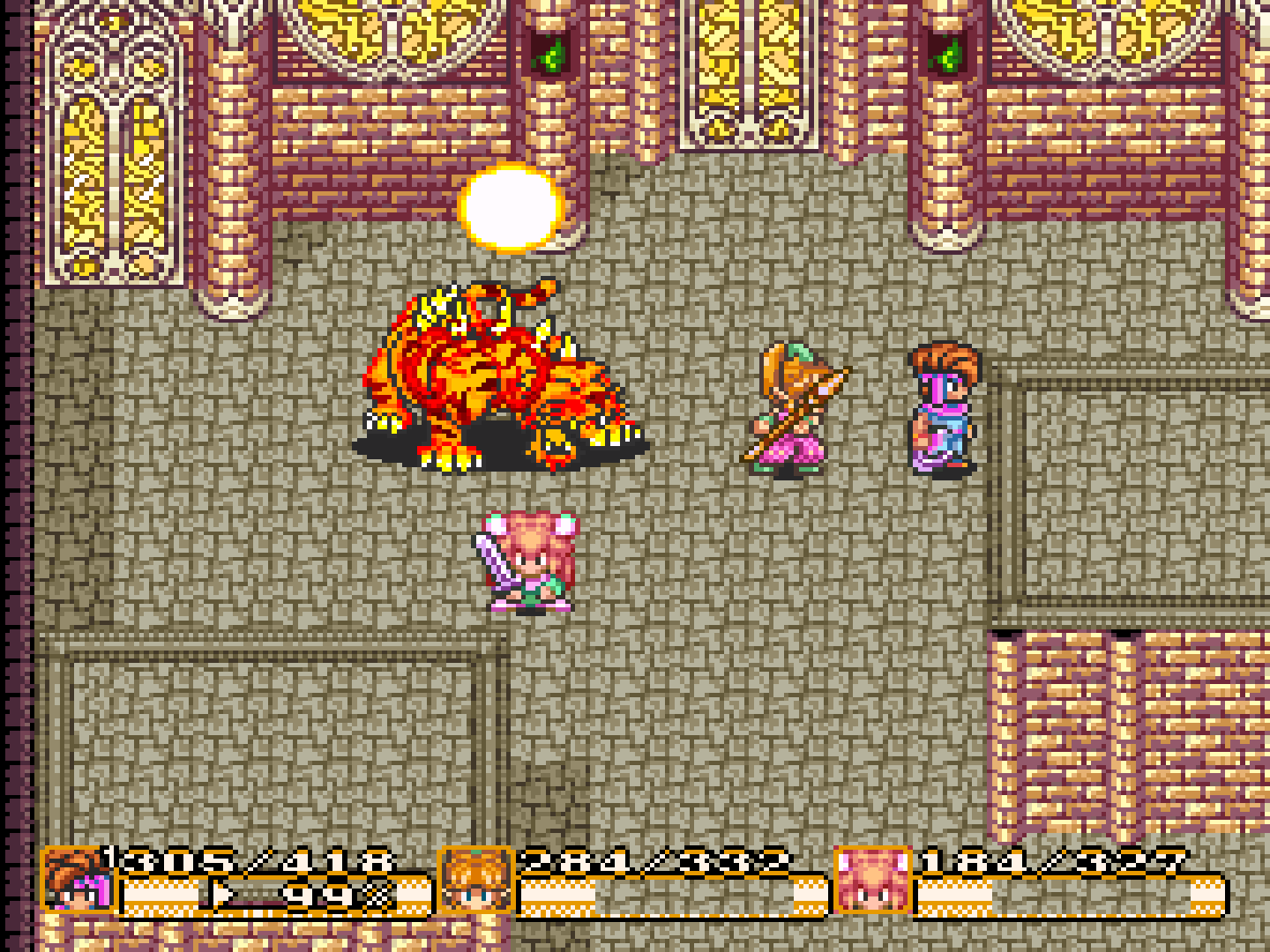 Our reward is a Boomerang's Orb and the way upstairs rises... 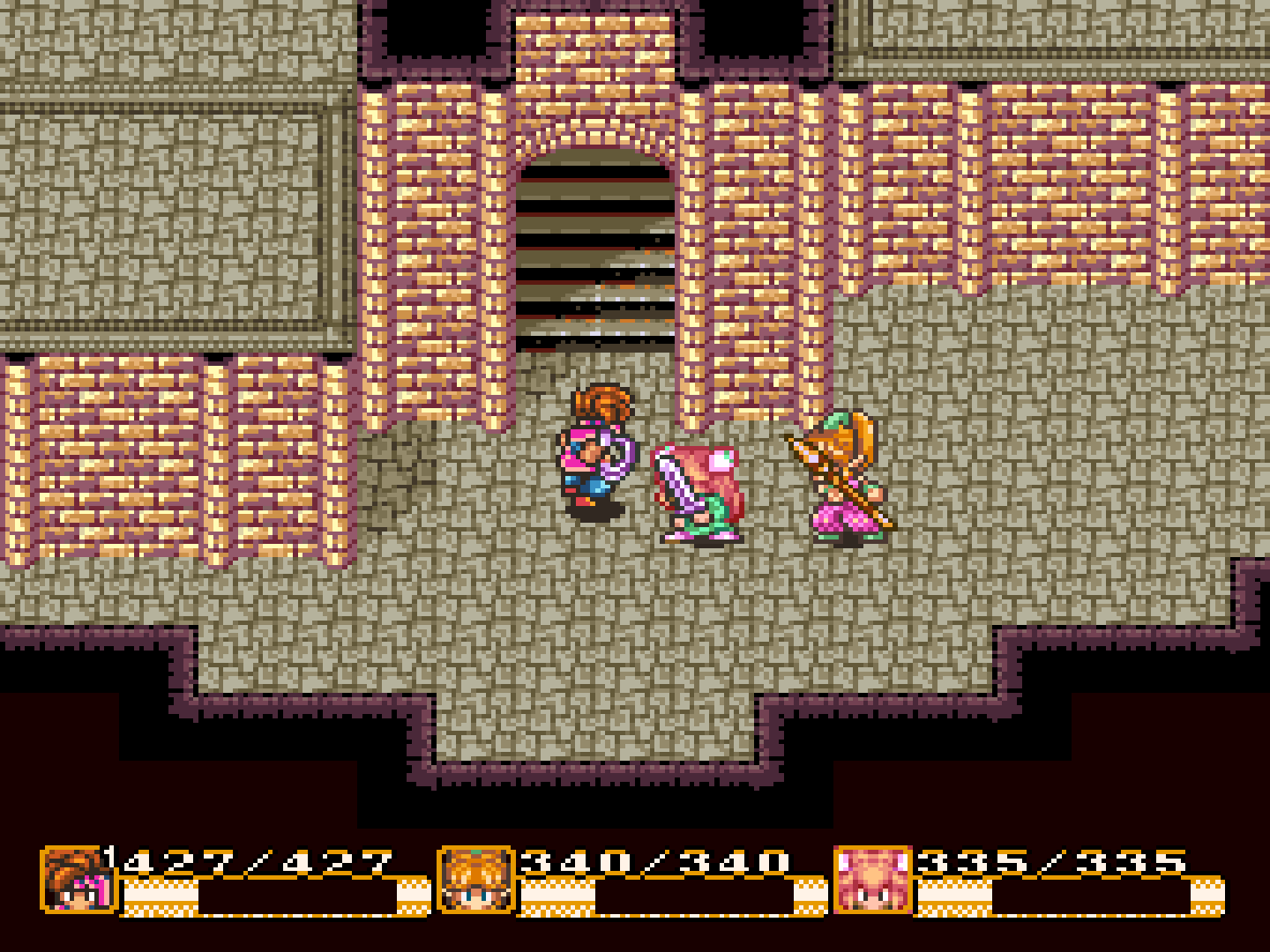 At the anteroom, we get an Axe's Orb!

But we're not done yet! Opening the door, there's more monsters ahead...

This game's tricking me right now...

Circling the tower again and up another staircase, we're faced with another boss, the Gorgon Bull!

Gorgon!? This means that this enemy has the possible power to turn one of us into stone! 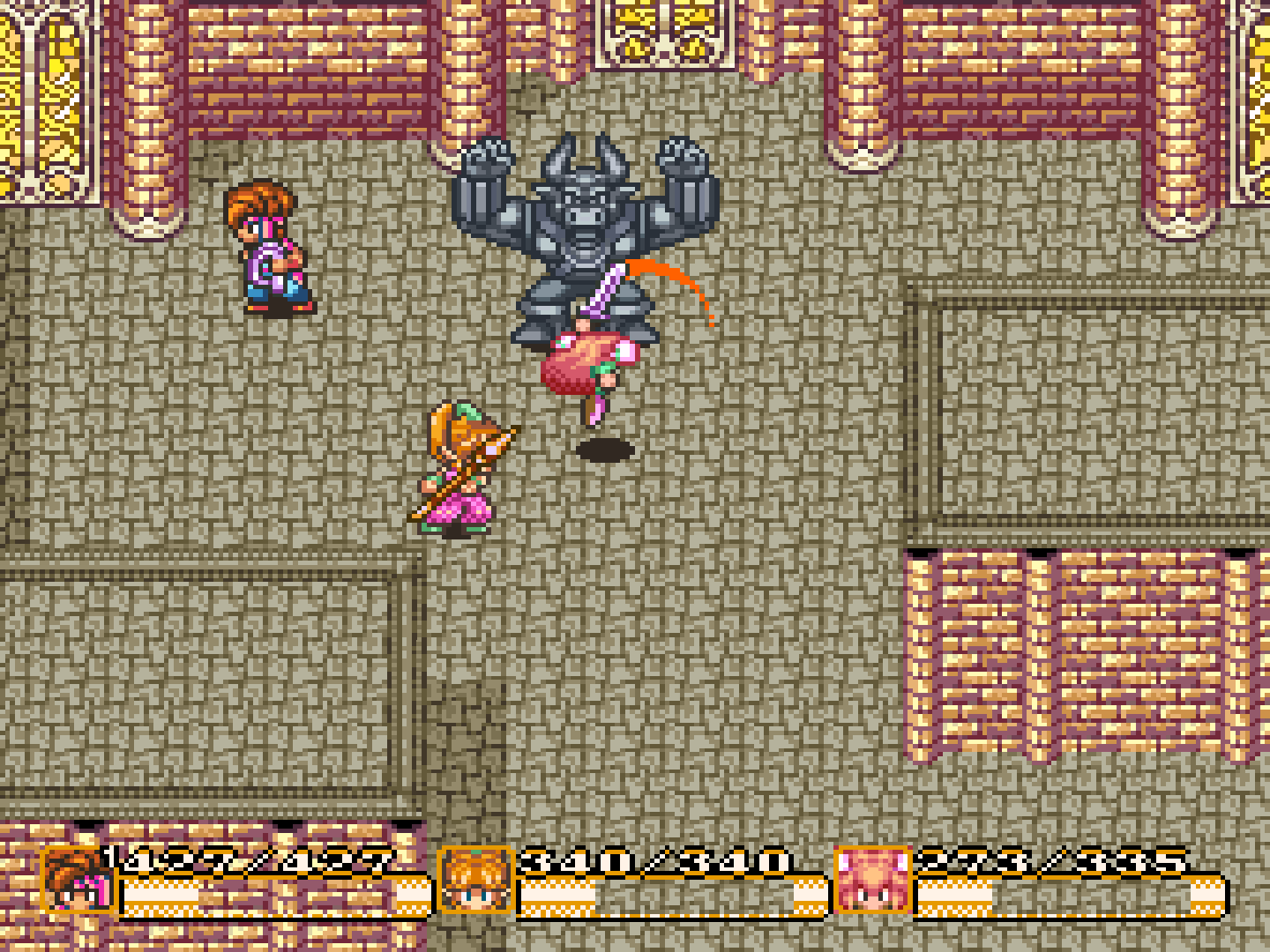 I steer clear of him when he charges!

Pidge's Fire Bouquet seemed to lessen his damage for now...

The Gorgon Bull's a quick spellcaster as well!

He also boosts his defenses!

Like his Minotaur counterpart, he's weak against wind magic!

As the Gorgon Bull finishes off the rest of the party, I have Max continue spamming wind magic at him!

Everytime he tries to pull off one of his high-leveled Earth Slides, Max beats him with a Thunderbolt or an Air Blast, causing Max to not take any damage from the boss!

Now the fireworks come in... 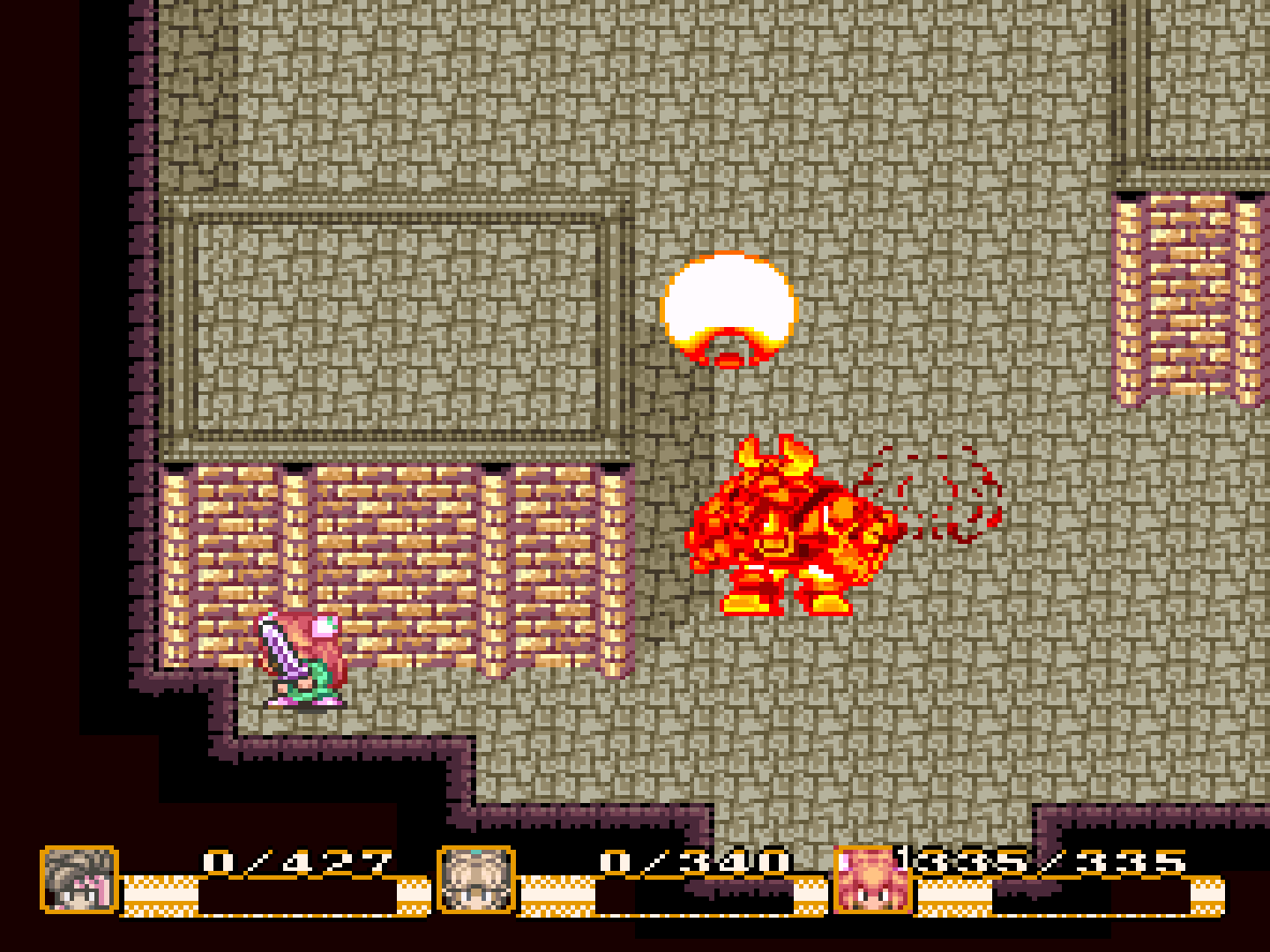 We win a Bow's Orb and the next set of stairs rise... 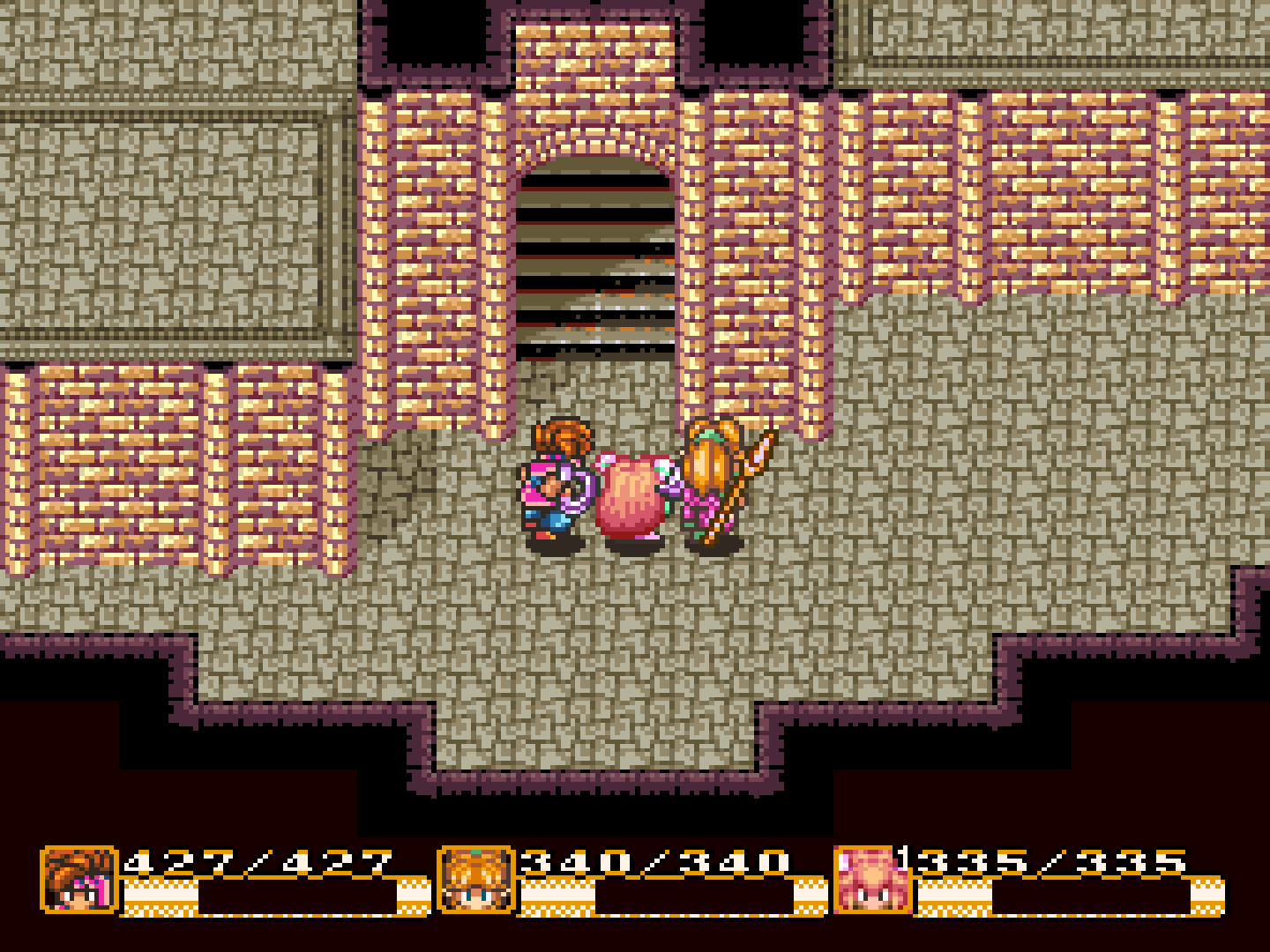 Exhausted, I turn back to the city.

But the music begins to change...this staircase must lead to the Mana Seed chamber! 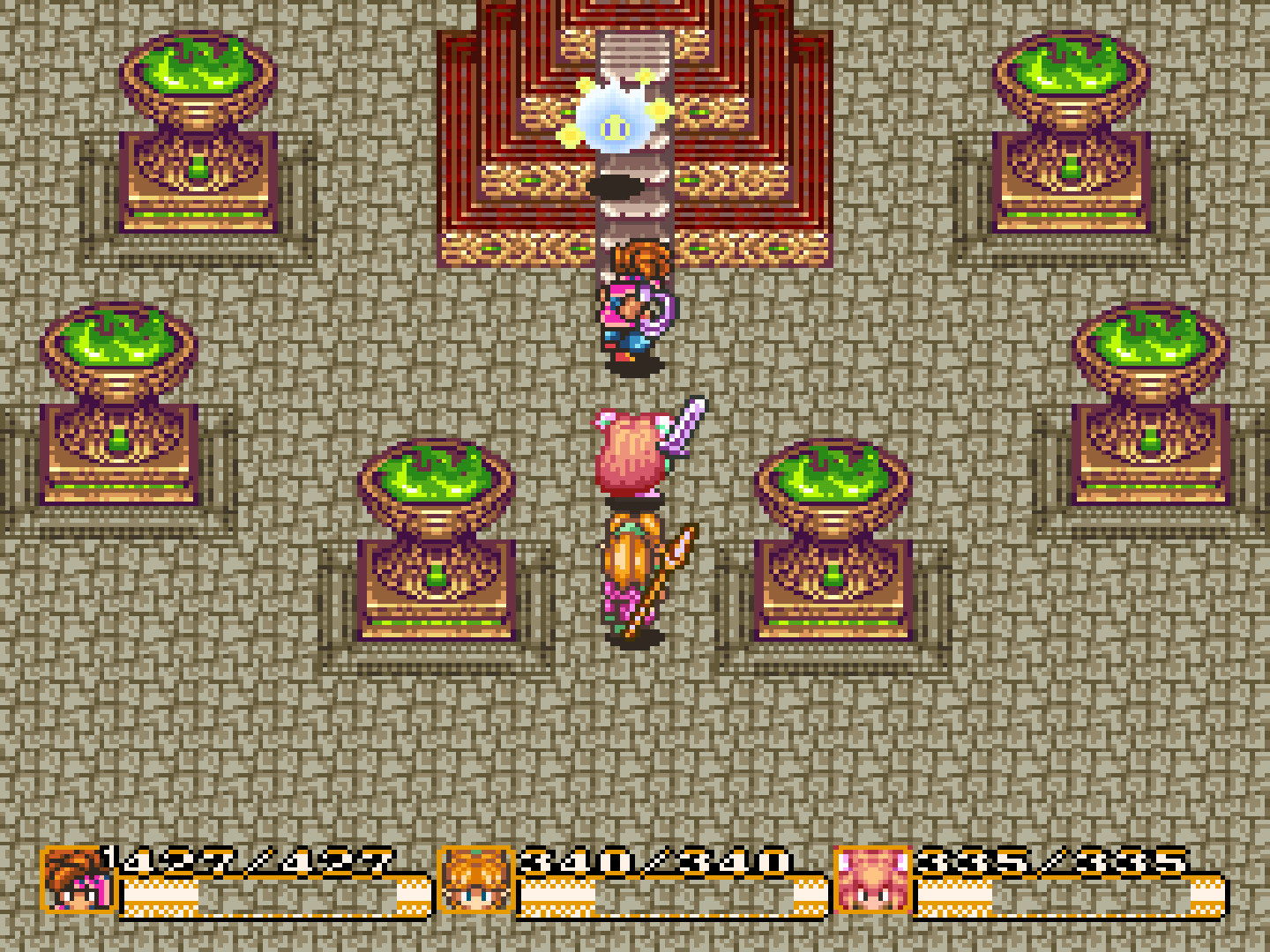 That cloud of light (or flame?) must be Lumina! How I knew about Lumina was from inside the ruins near Northtown. The game name-dropped the Elemental when I analyzed the Doom's Wall and Vampire there.

The screen turns bright white and Lumina speaks to us! 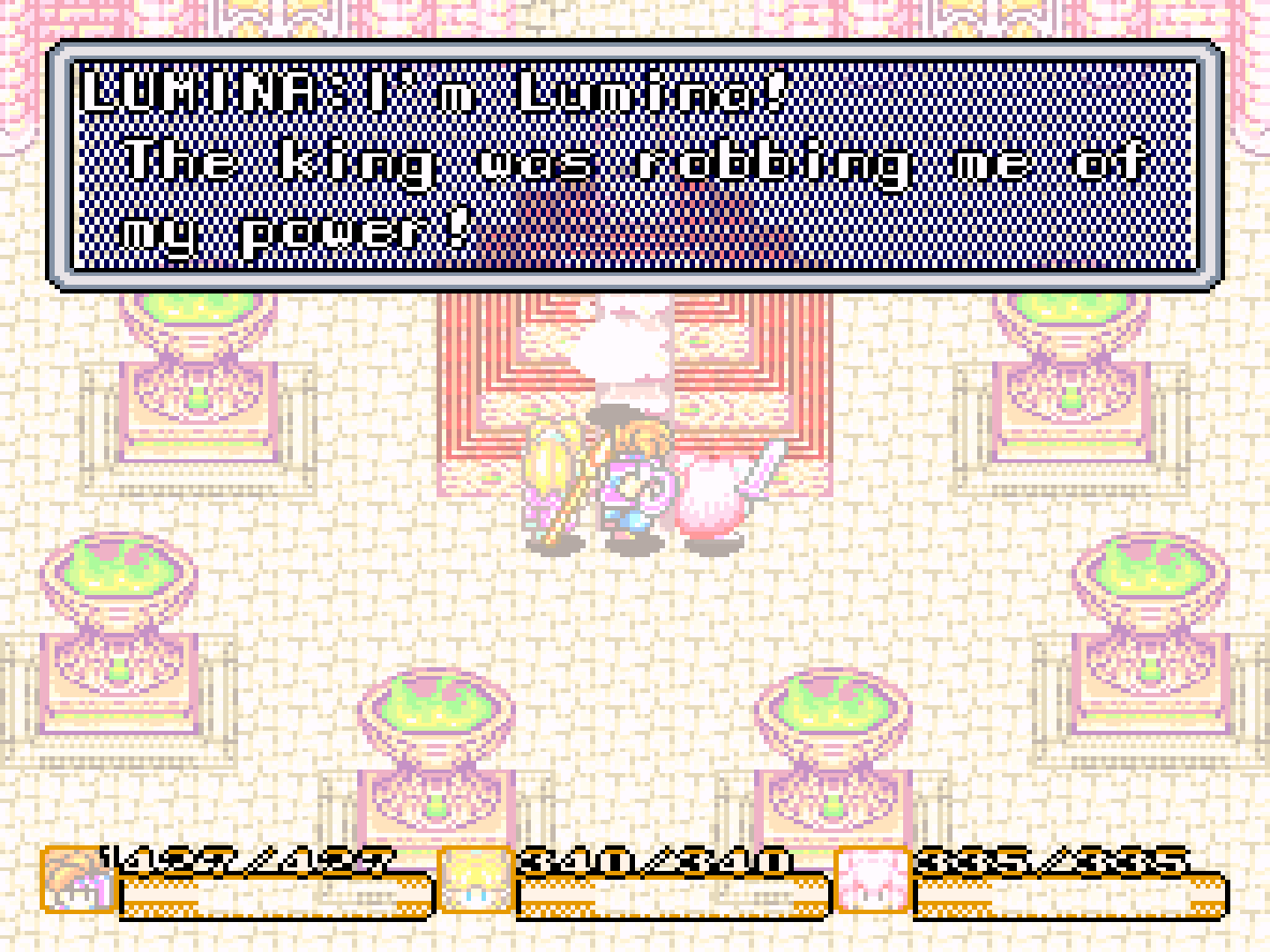 Lumina: "I'm Lumina! The King was robbing me of my power!"

Lumina: "[King Manmon] was forcing me to make gold! My power should not be used by anyone but you! Take my power before evil engulfs us all!"

Lumina's magic is now ours! Yes!!!

So it wasn't "alchemy", but Lumina's power because of the King's greed that caused the whole island to turn into gold! 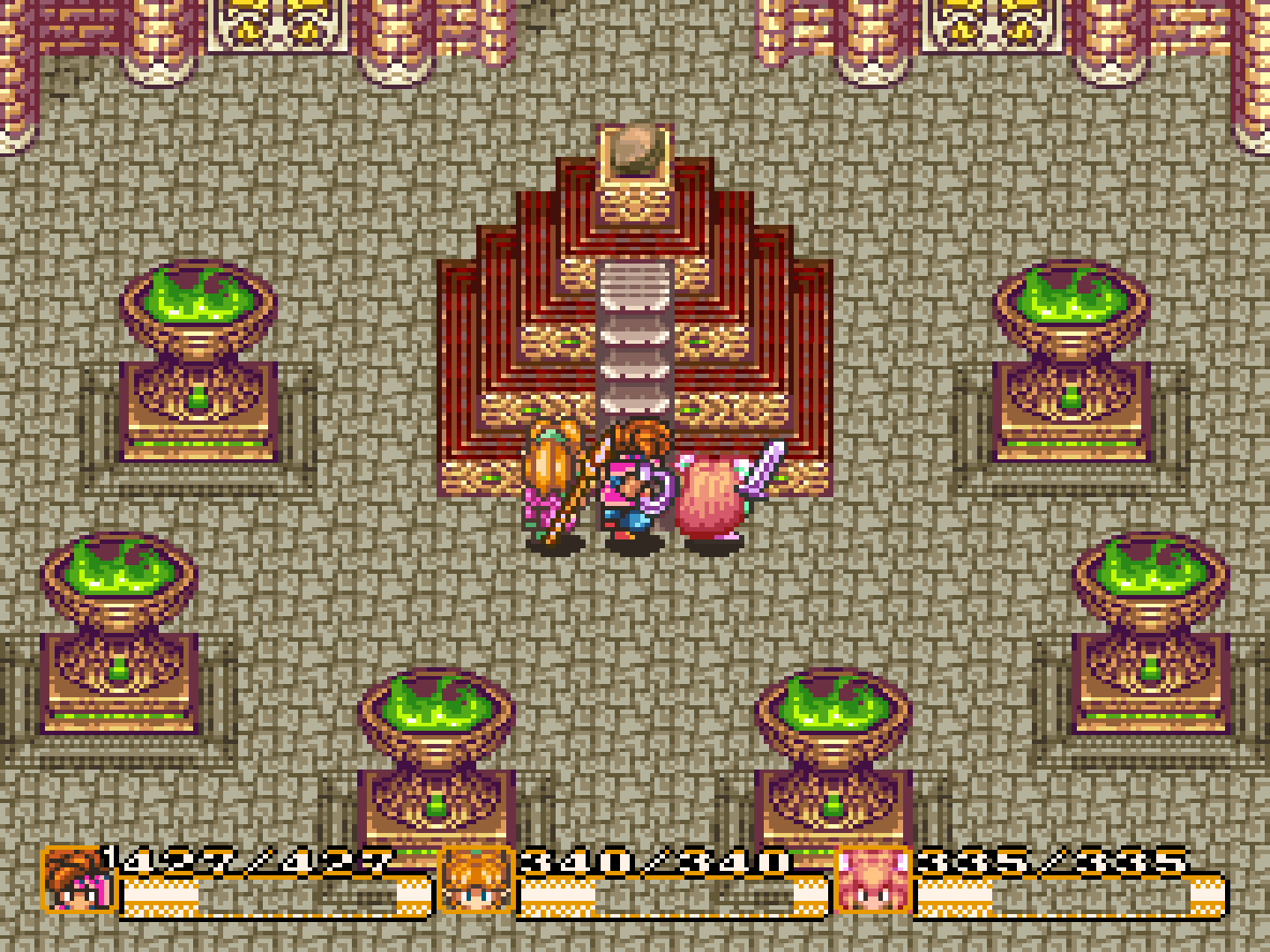 Now for the Mana Seed... 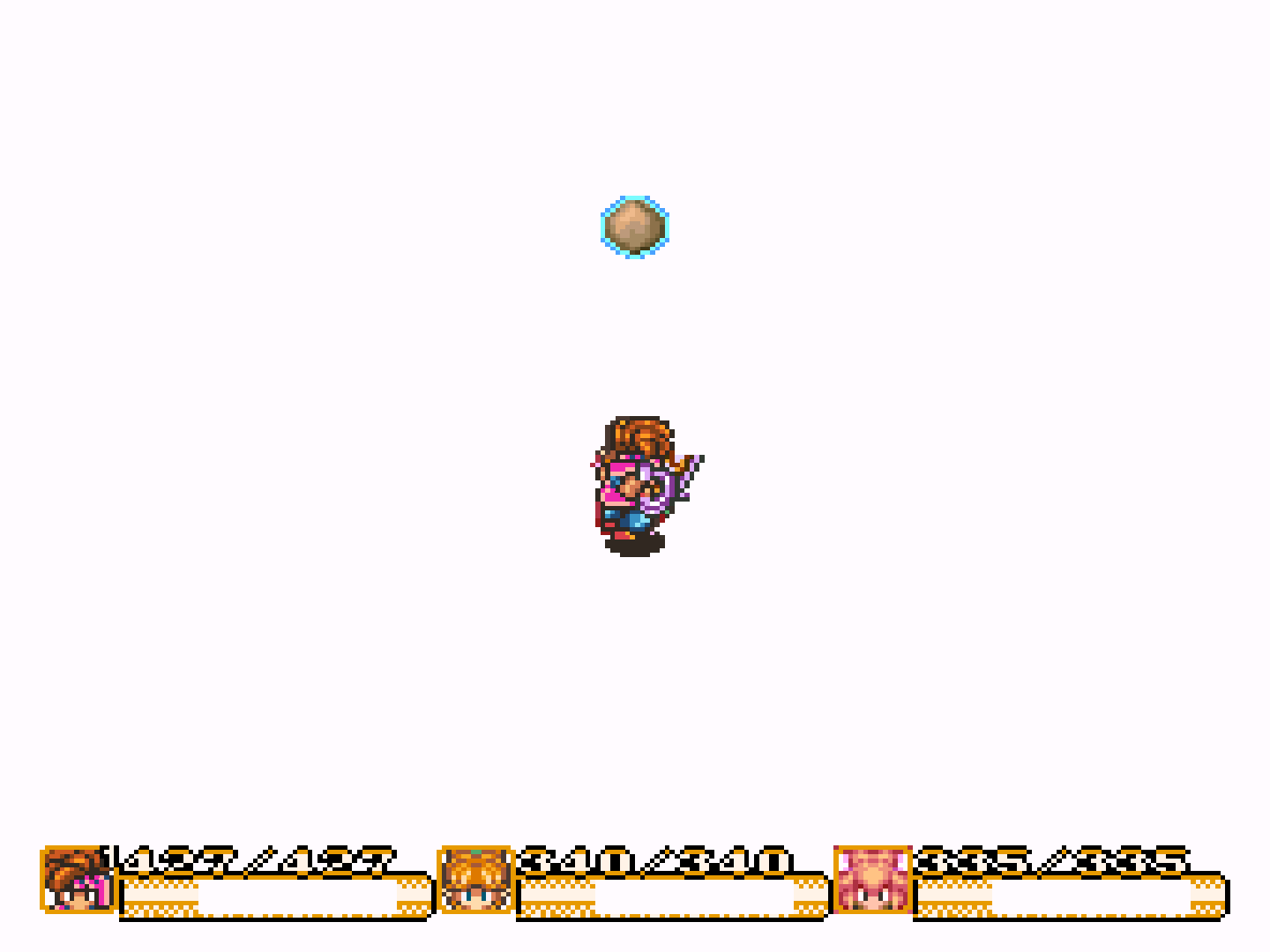 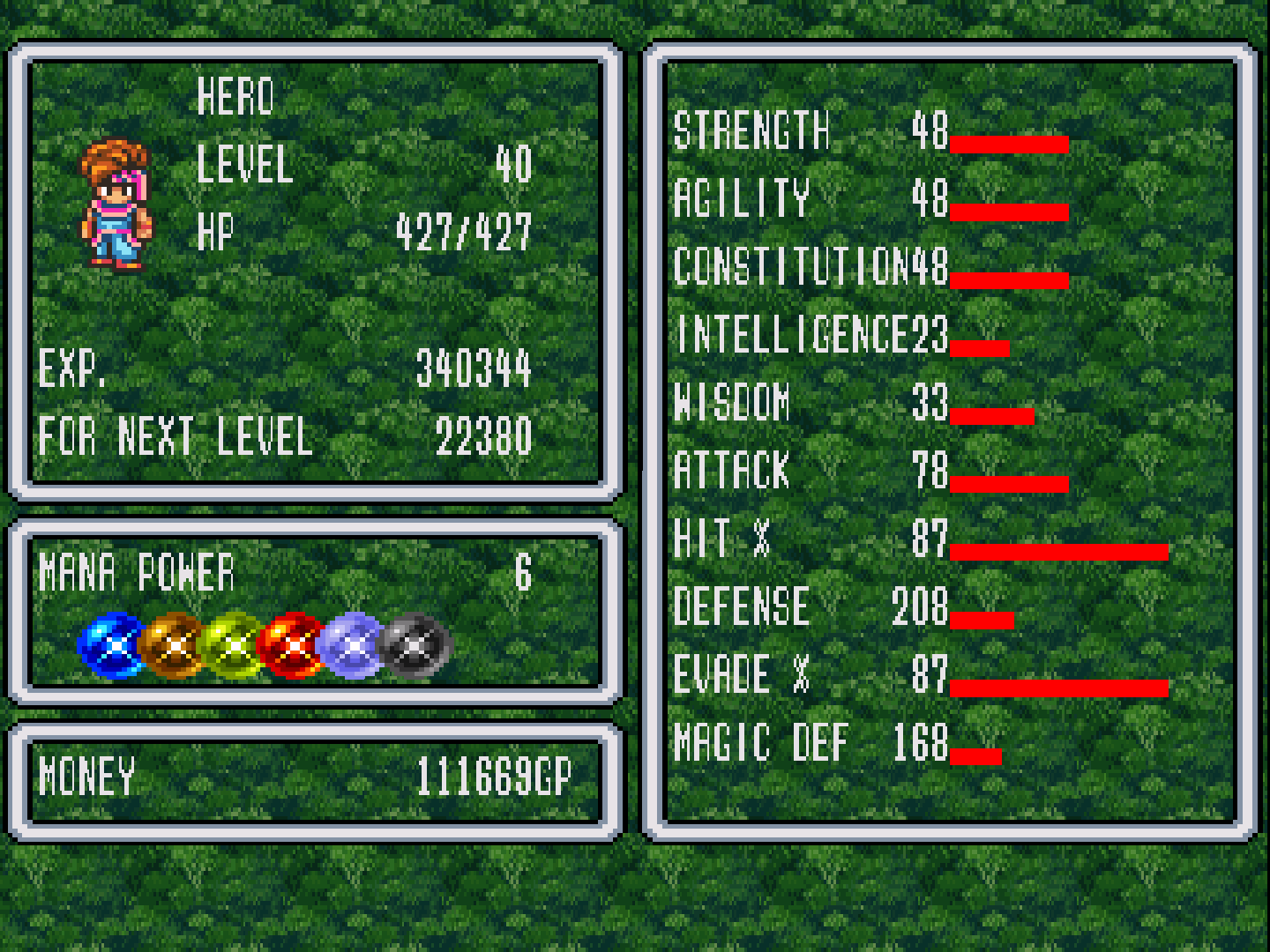 By the order of how the Mana Seeds are presented on the status screen, I should've visited Gold City and taken on this tower first, then the Palace of Darkness...

However, I know that I'll fall very quickly to the bosses if I started the tower first... 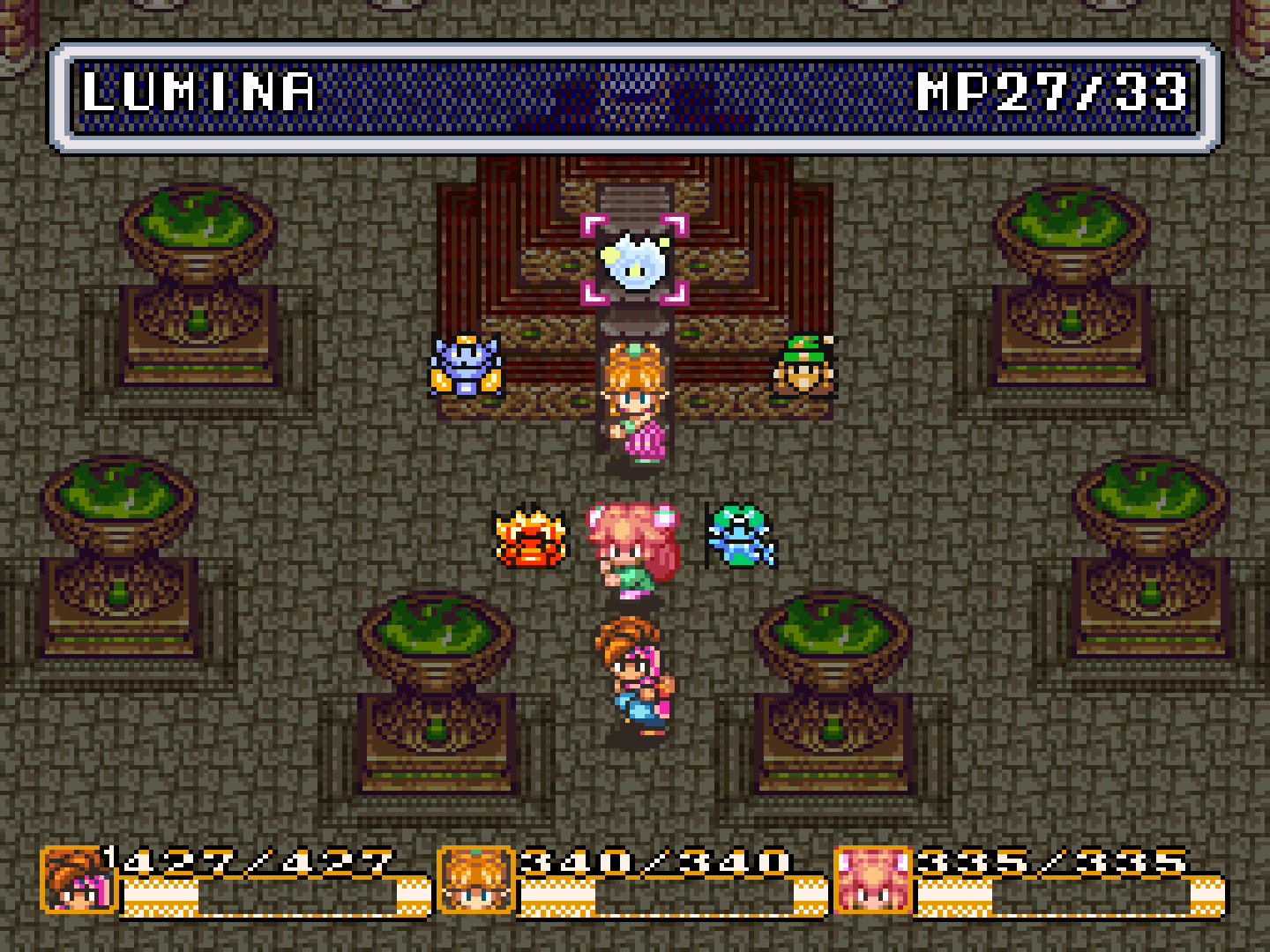 Let's see what spells she has: Light Saber, which can enchant weapons with light magic, Lucent Beam, and a Lucid Barrier!

I rest up at the inn, another hard, but surprisingly short session over!