Let's hope I rescue the Major in tonight's session!

We take to the center door!

Ghouls and Specters, oh my!

After more fighting with Wizard Eyes, we go down the stairs to face off against a trio of Grave Bats!

I switch Hero's weapon to the bow, now that he's gained a level in the Spear!

Oh great, stuck in a corner again, and we're getting attacked!

I use Max's magic to get us out of that tight spot, and we eventually take care of them! 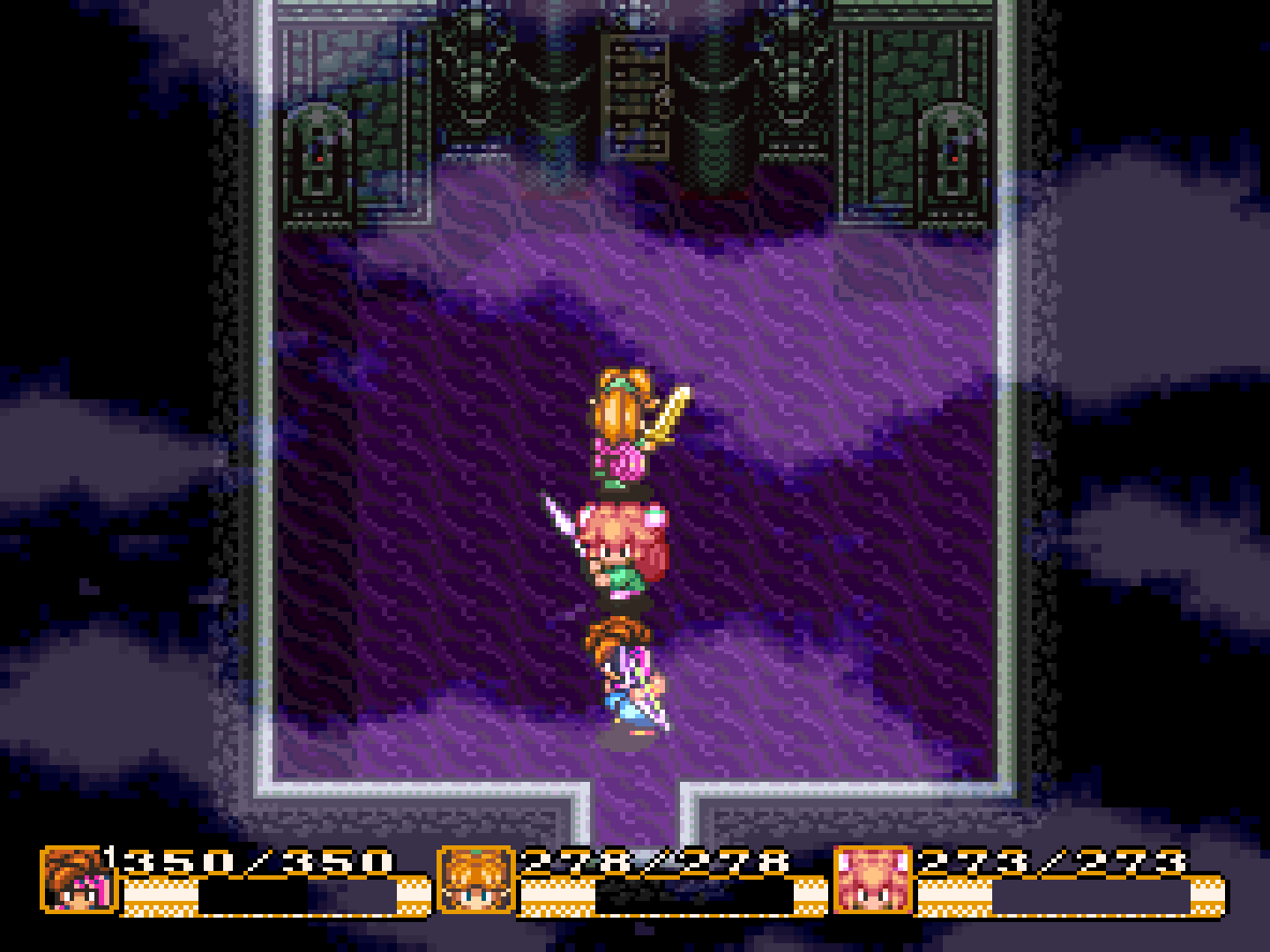 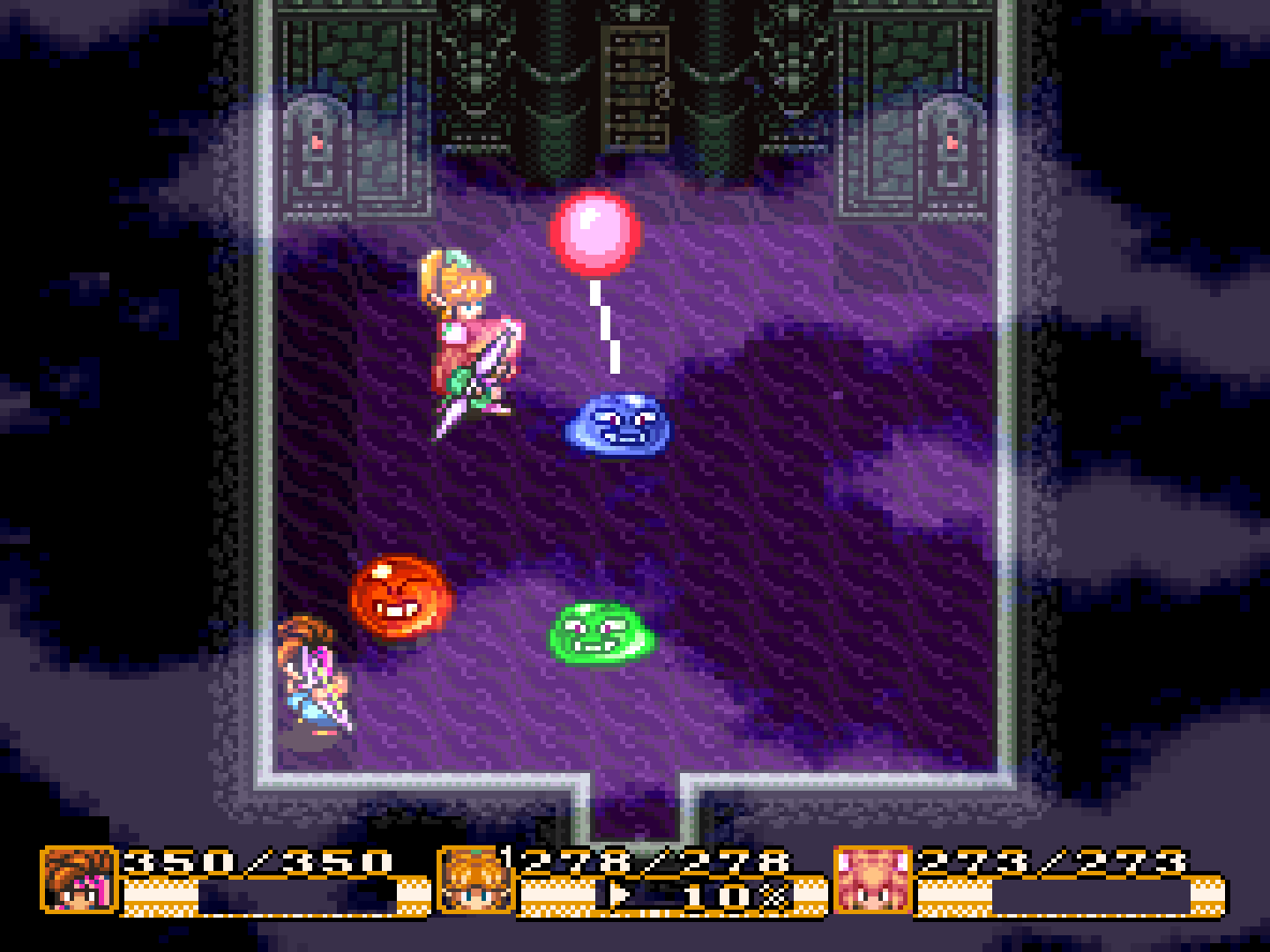 The Green Drop's the easiest to go down!

The Red Drop's the last one out!

I realize that I only have two Walnuts and make the hard turnaround back to town!

After restocking on Walnuts, I buy a Tiger Mask, Suit, and a Frosty Ring!

I equip, sell, and rest-and-save.

Now we're a little more prepared for this ruin!

Everyone so far's at level 32.

We make it back and brush through the wave of enemies until we go to the south end of the hallway. 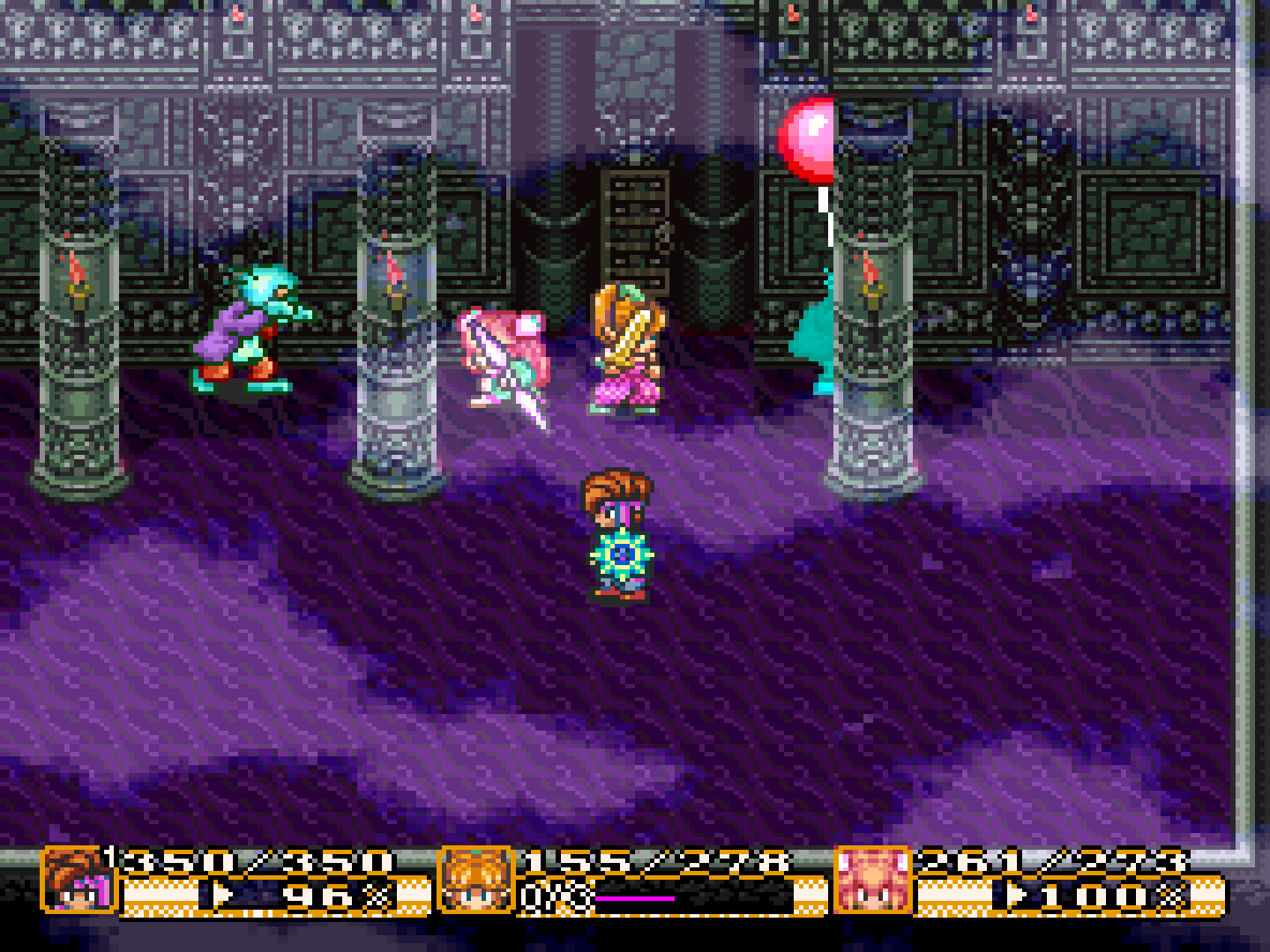 After a short fight, the Ghouls speed themselves up! We take care of them quickly!

We pass through the door a duo of Robin Foots are guarding!

After passing a hall of bats, we end up in an empty office!

We turn back and proceed west.

Into another door, and into a hall of Blue and Green Drops!

The door beyond goes down this time.

But the way's blocked by two Ghouls and an Imp!

The arrow carpet's back too...the composition of both the enemies and party here make this feel like a Chrono Trigger battle! 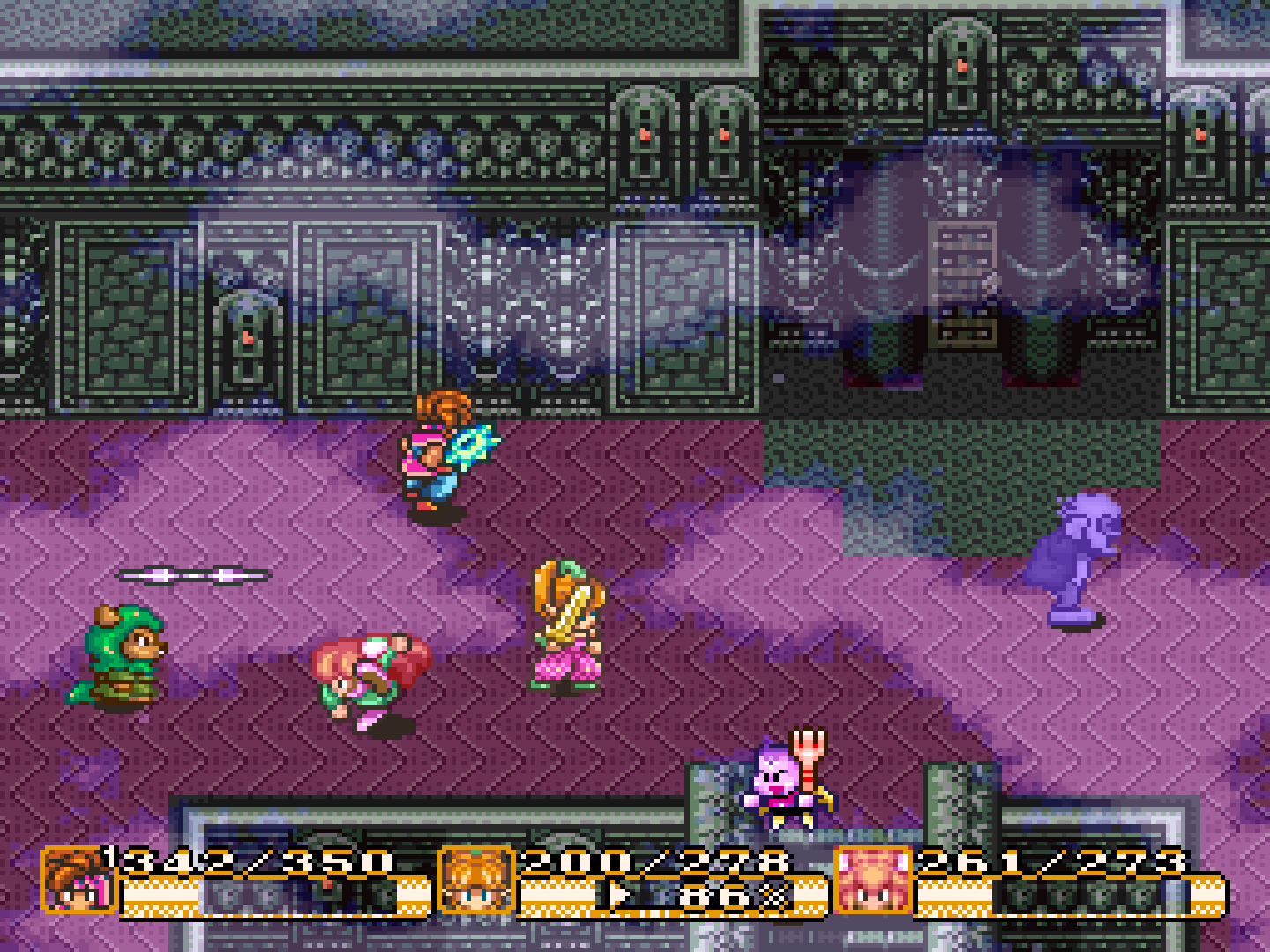 Westward, I see something I really did not expect to see again...spikes! 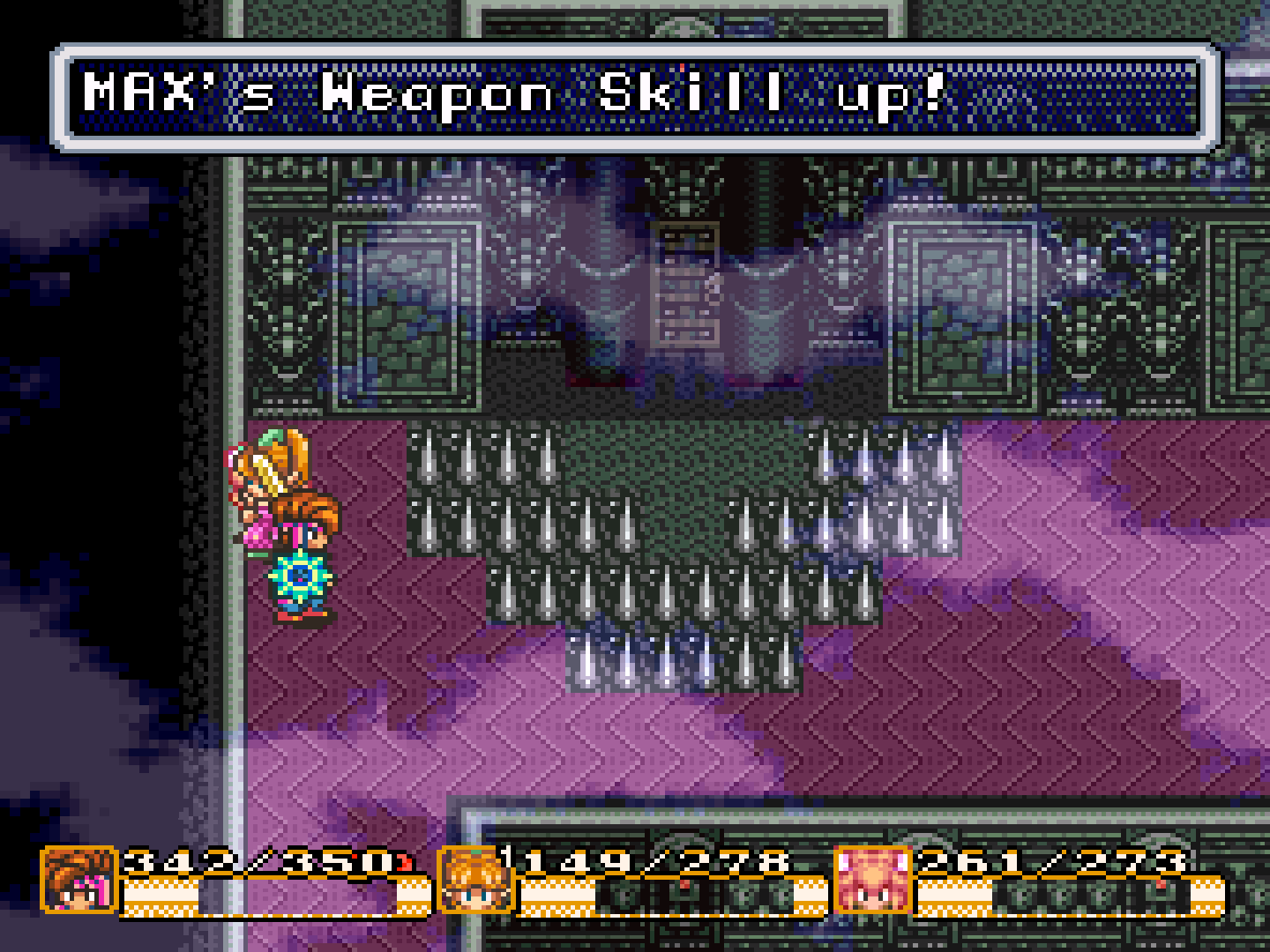 After a battle with eye enemies, the whole party's now leveled up their weapon skills!

We go further south to a dead end!

We turn back and take a turn south...

Northwards leads us back to the entrance. Taking the staircase down leads us to a passage blocked by spikes!

In the next room a Blue Drop, an LA Funk, and a Dark Funk await!

While charging the sword, the Blue Drops turn Pidge into a snowperson!

Into a door, where more enemies are!

After they're gone, I have Pidge push the switch. 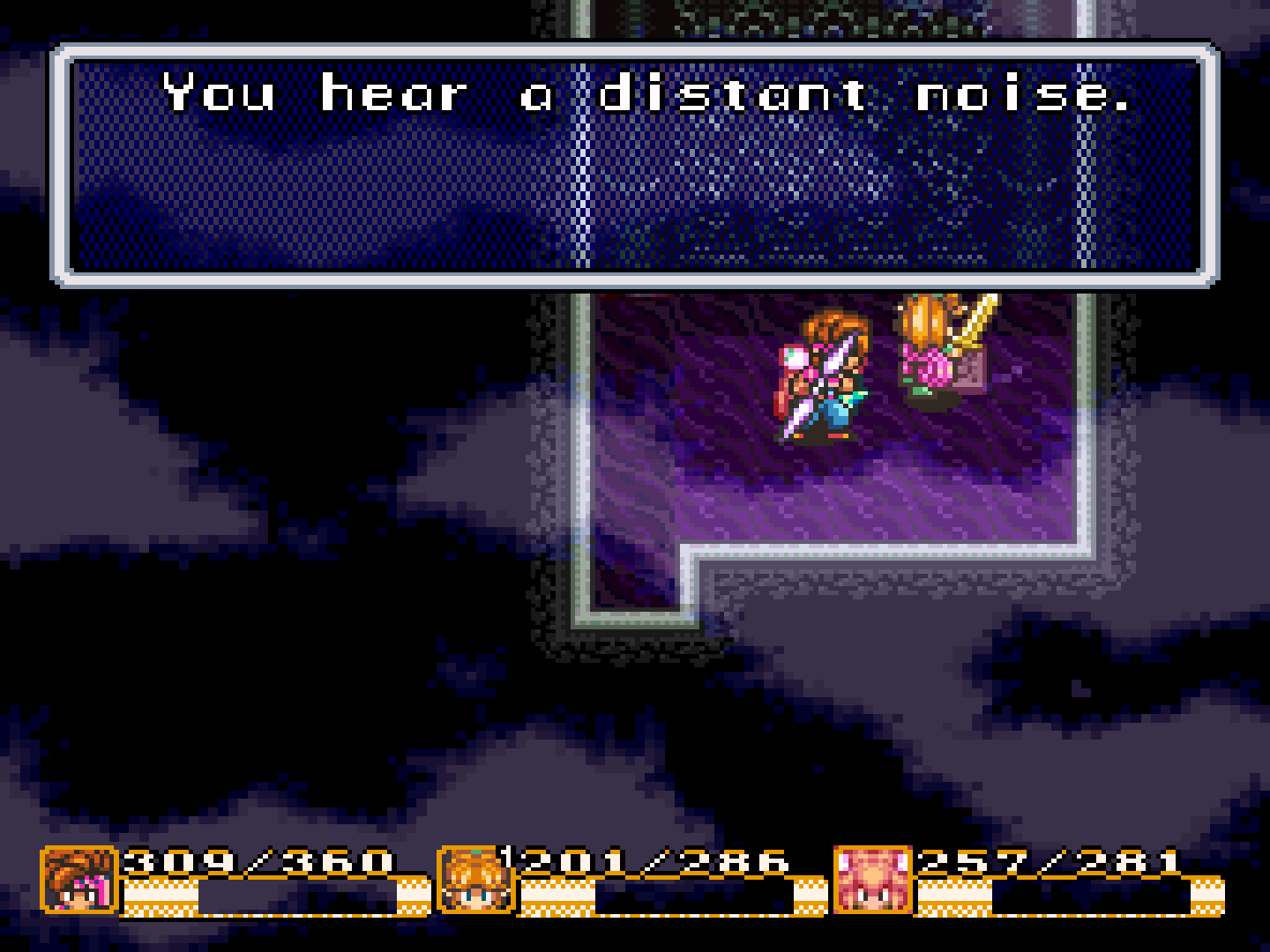 I'm thinking something might've happened to the spikes in the previous room...

I'm right! All the spikes have been lowered!

I approach the northern chamber.

There's more Ghouls and a chest too! 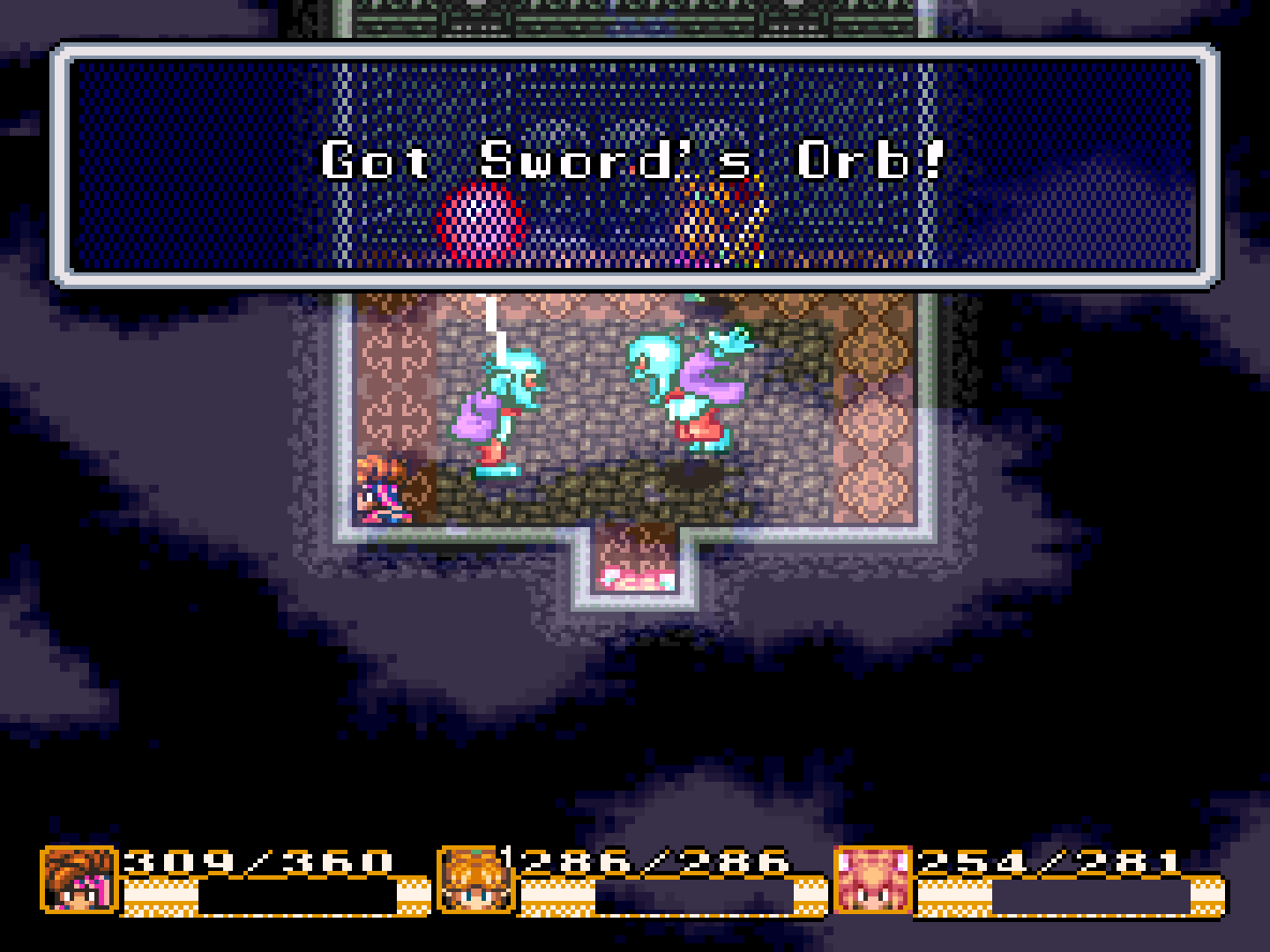 Yes, that means we can now upgrade the Sword!

But during my celebration, a Ghoul leaps on Pidge, poisoning her!

We escape, and climb down the stairs, and press the switch down there! 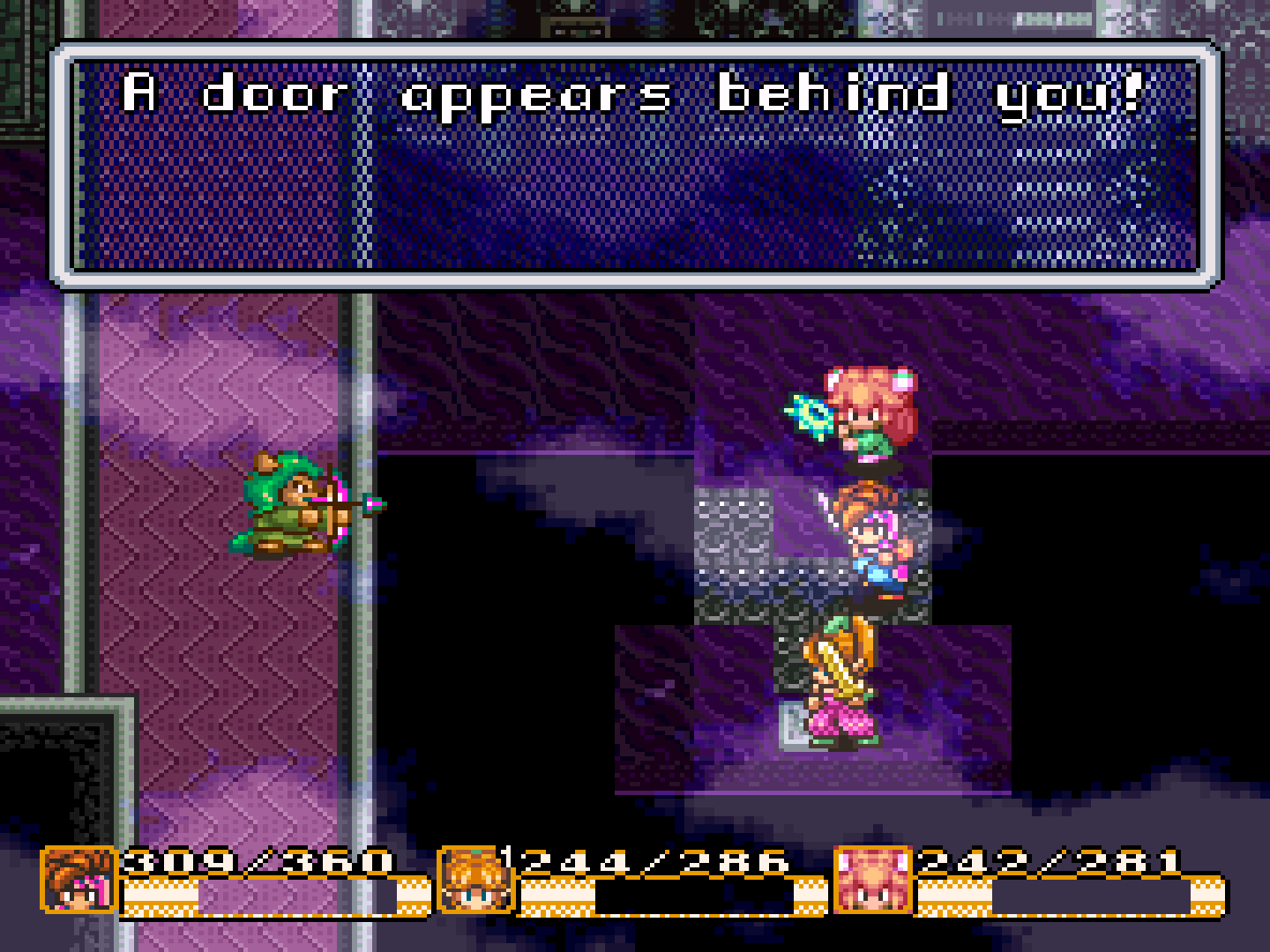 Why does my curiosity get the better of me again?

Now we're on the lower level, on the other side of the area...

At the south room, we run down the stairs to another floor.

How deep does this ruin go?

After finishing off more Ghouls, I check Pidge's weapon level stats, then equip her with the Spear!

Wonderful, we're now at a maze of spikes! 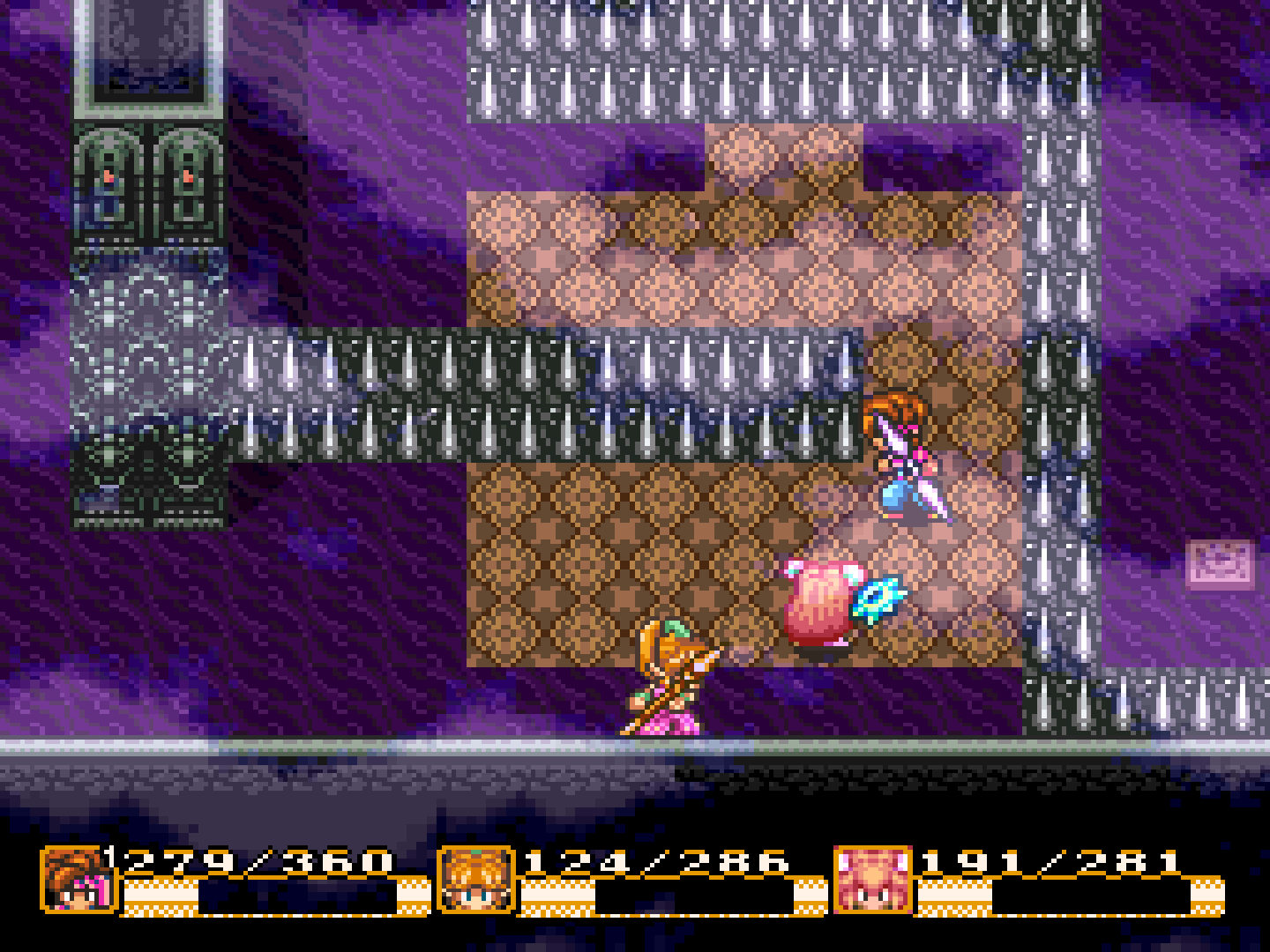 I carefully make the party's way across the mini-maze, take care of the stray Imp, and press the switch to lower them! 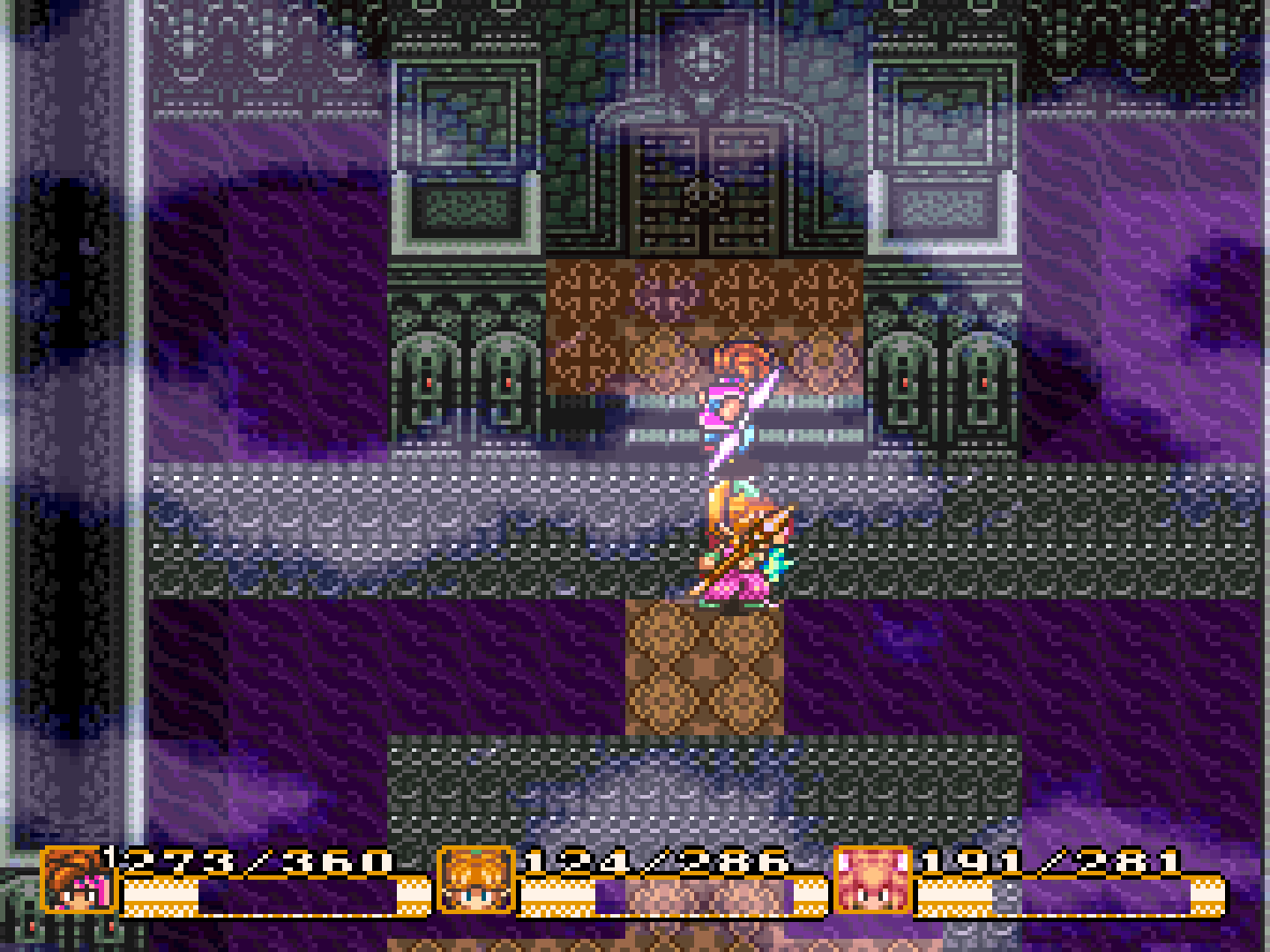 Those doors beyond must be where Thanatos and the Major are...

Knowing that I'll be facing a tough battle, I do some short preparations...

More enemies come forth on the other side of the doors!

I dash Hero down the stairs, and see more Robin Foots, who are no match for the party...

Let's see if this hall actually leads to where the Major and Thanatos are...

Instead, the hall ends at a set of double doors... 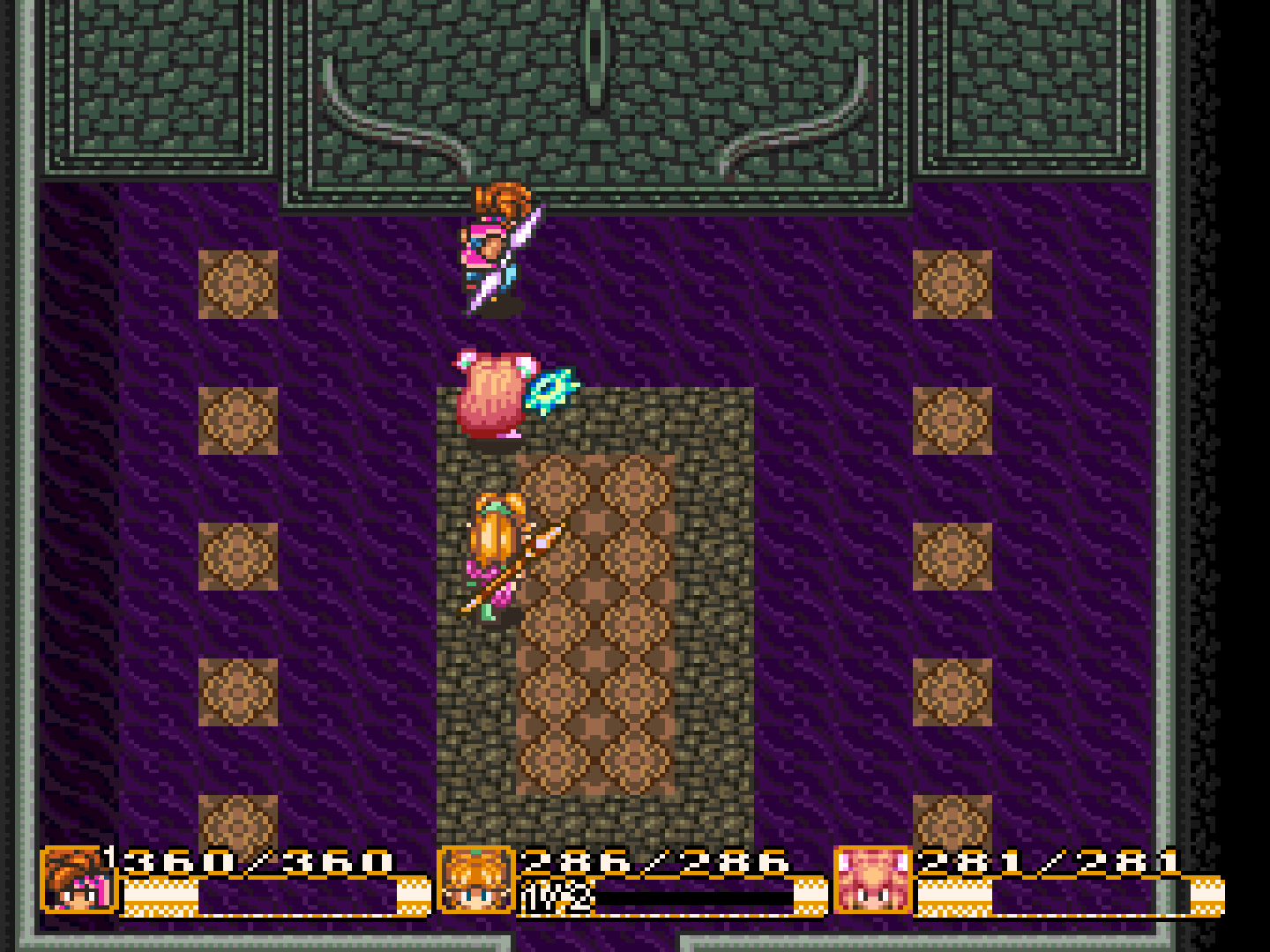 ...and inside, we're greeted by another wall monster, one of Thanatos's "pets"!

The wall monster's a Doom's Wall. I start off by having Max fire the first spell at it! No good, as the wall heals itself, blocking Max's spell!

Its two Doom's Eyes wake up!

The spells seem to connect...

Now this is a new trick: Doom's Wall uses Confuse Hoops on Hero!

Max is down to 1 MP! There goes the last of our Walnuts...

Using an Exploder spell on the entire wall now...

It's not very effective...

Analyzing the wall monster, I learn that it's weak to Lumina's magic! So Lumina must be another Elemental...

Since the wall's almost finished, I spam more Fireballs at it!

The fireworks show begins to start... 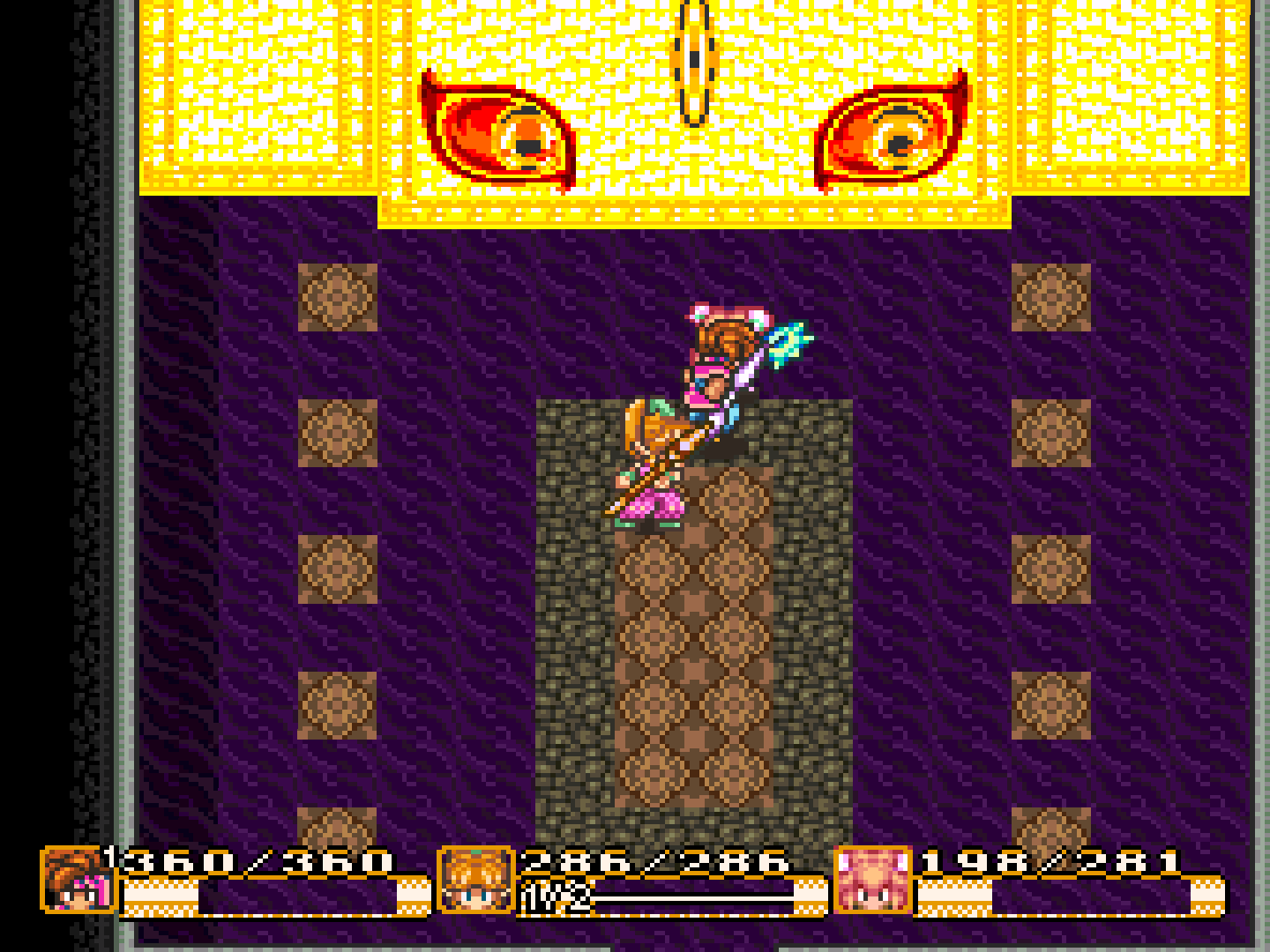 We get a Whip's Orb!

We proceed further to the double doors ahead. 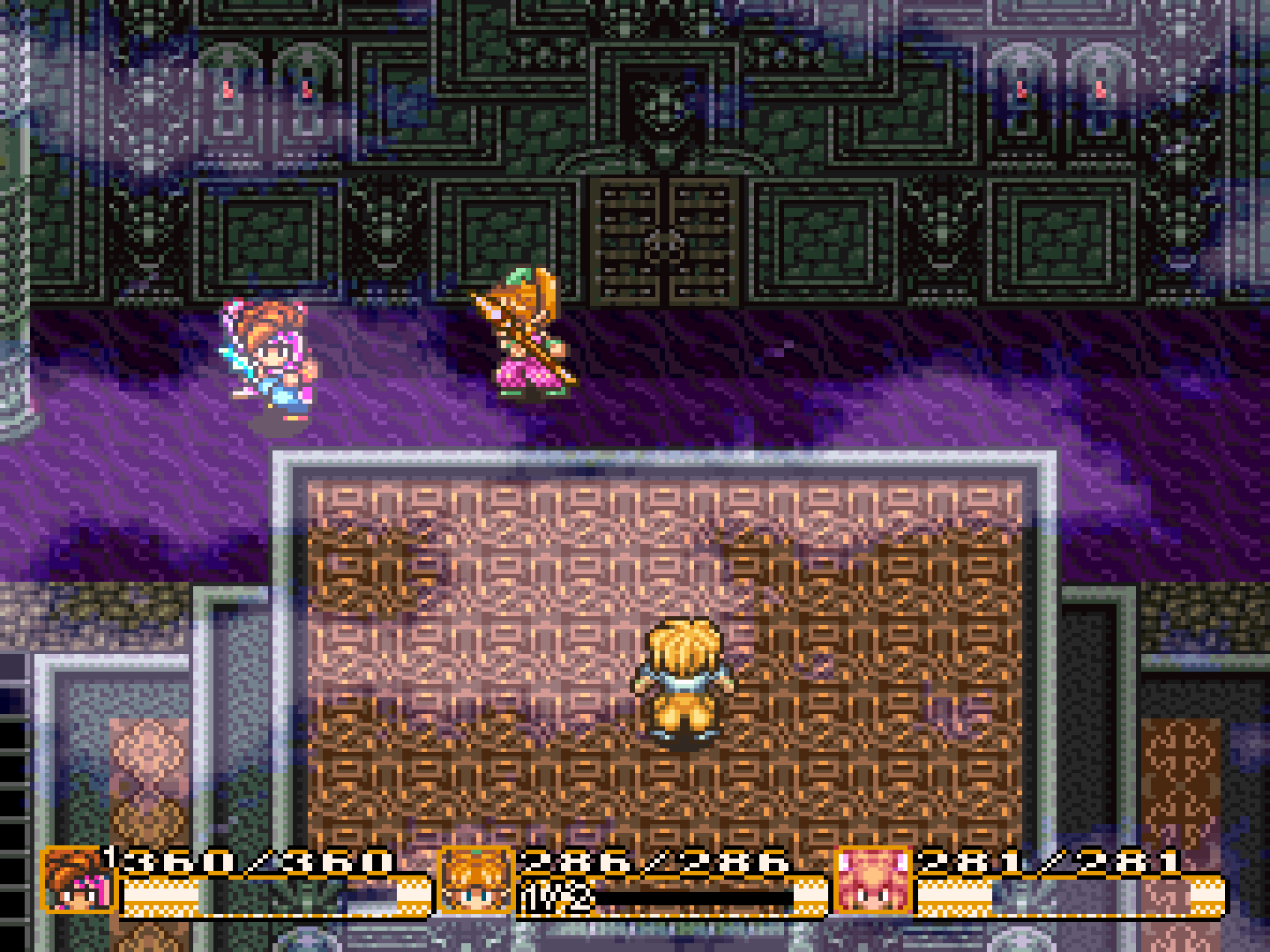 There's also a door forward, but it's locked.

I have Pidge take the lead this time.

I wonder why are our weapons still out? There's no enemies here... 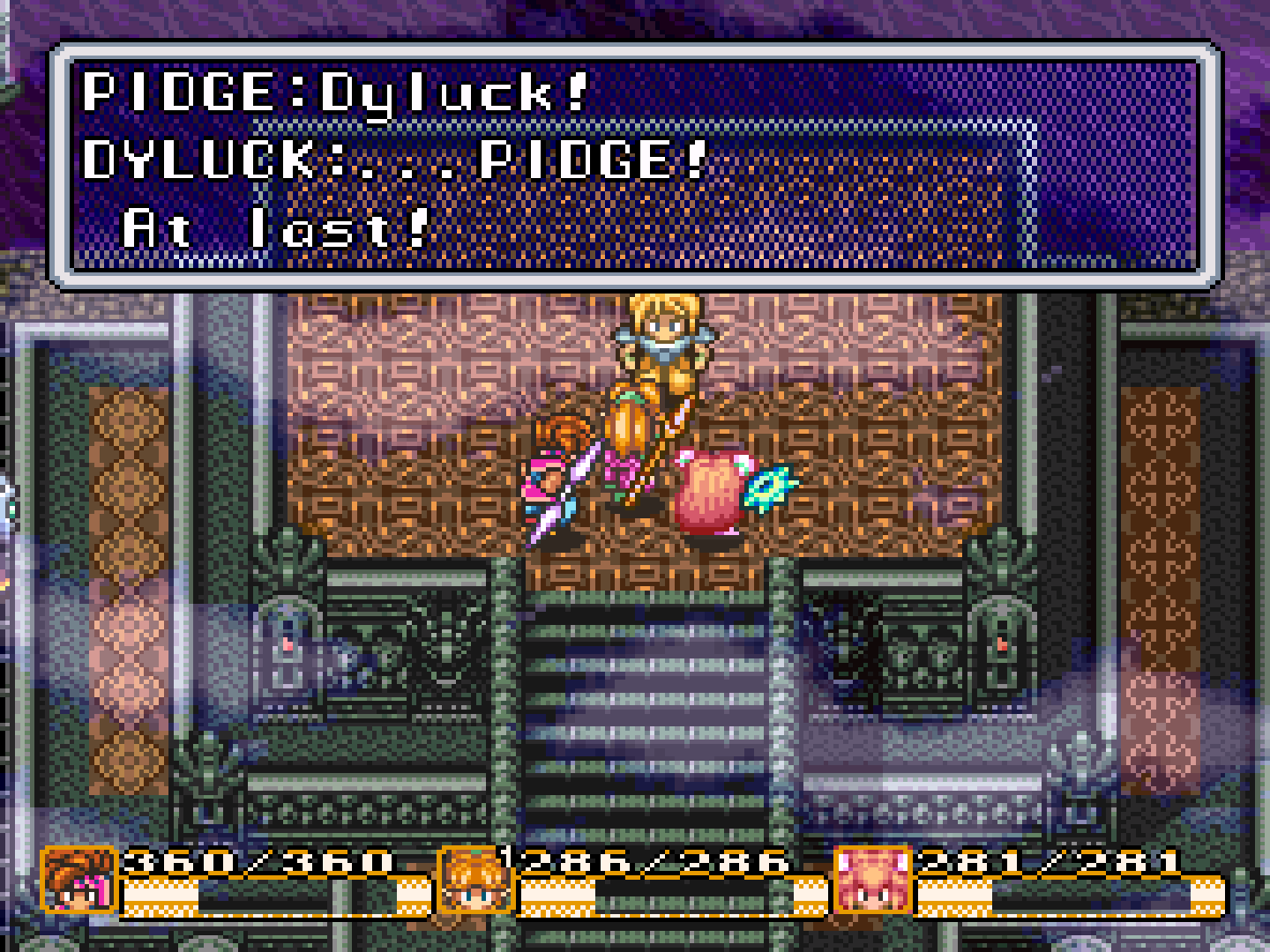 Is he overjoyed to see us?

Pidge is now taken in by the reaper, and she's not coming back! She disappears... 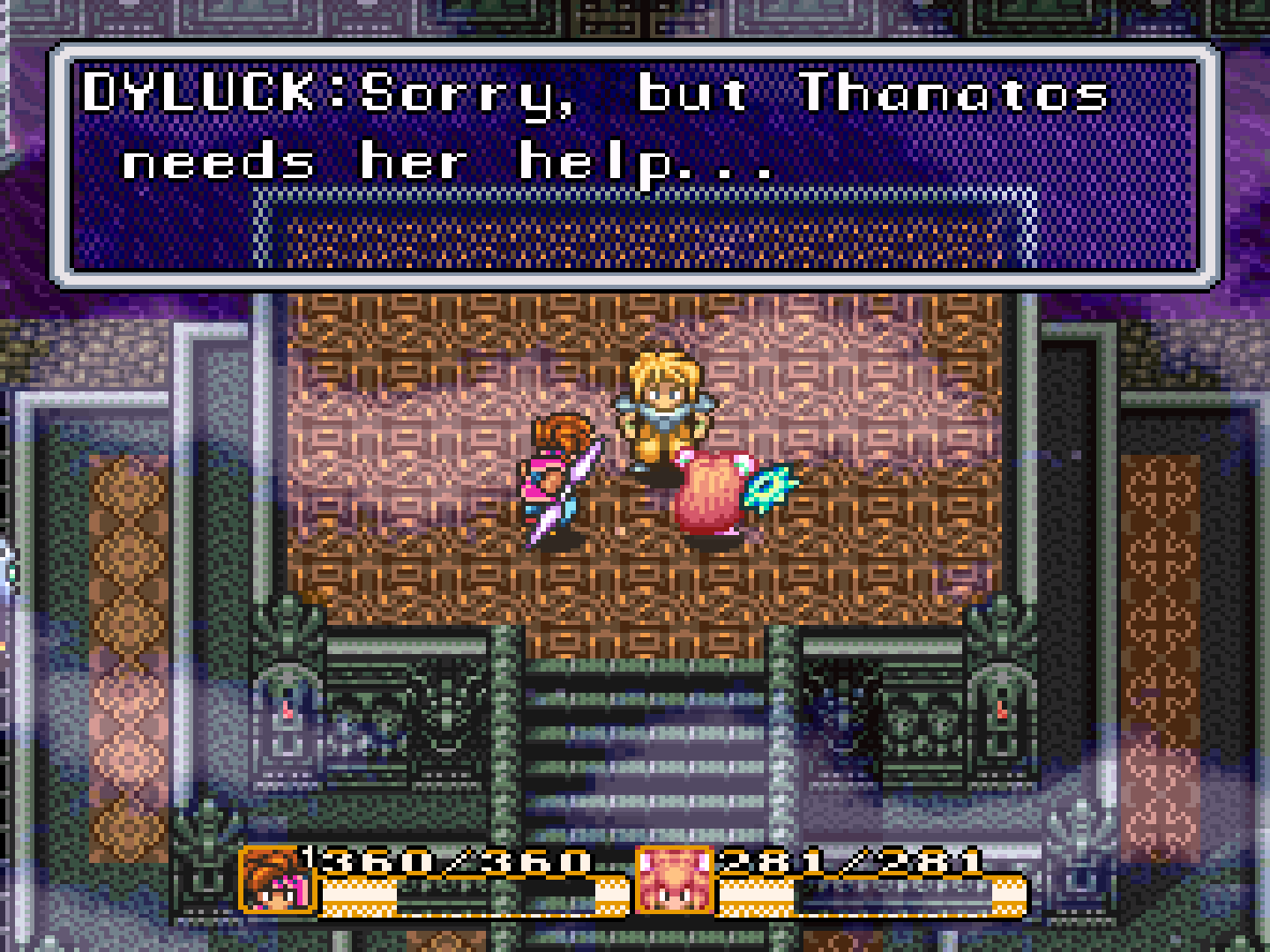 Hero: "You can't be serious! She loves you! I can't handle this!"

Hero aims his javelin at Dyluck, knocking him back to his senses!

Dyluck, now back to his old self (maybe?), tells us to go through the door behind him.

Hero and Max come to Pidge's aid, but are thrown back...by Thanatos! 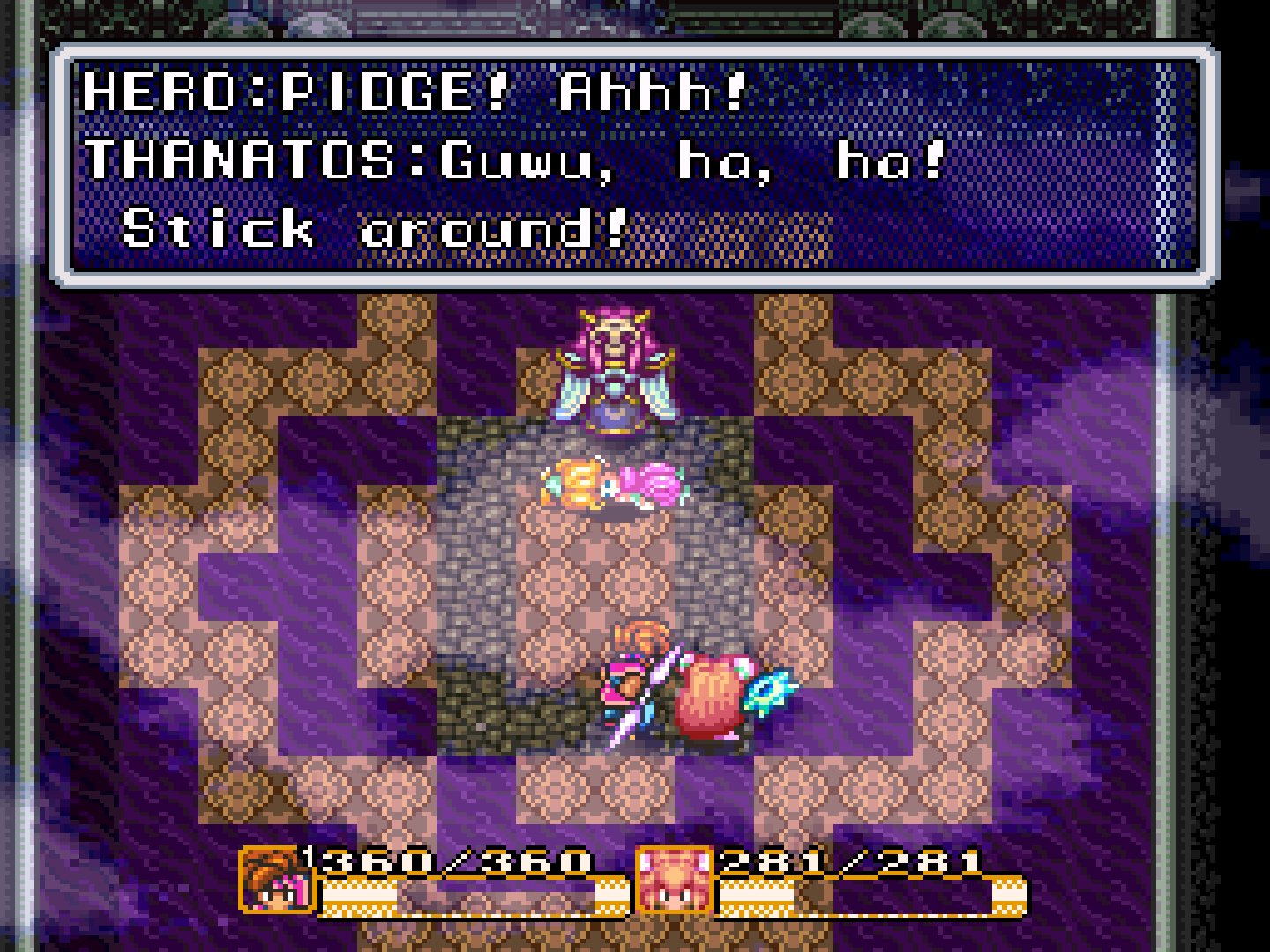 A golden light glows and Pidge comes to...the gang's back together once more! 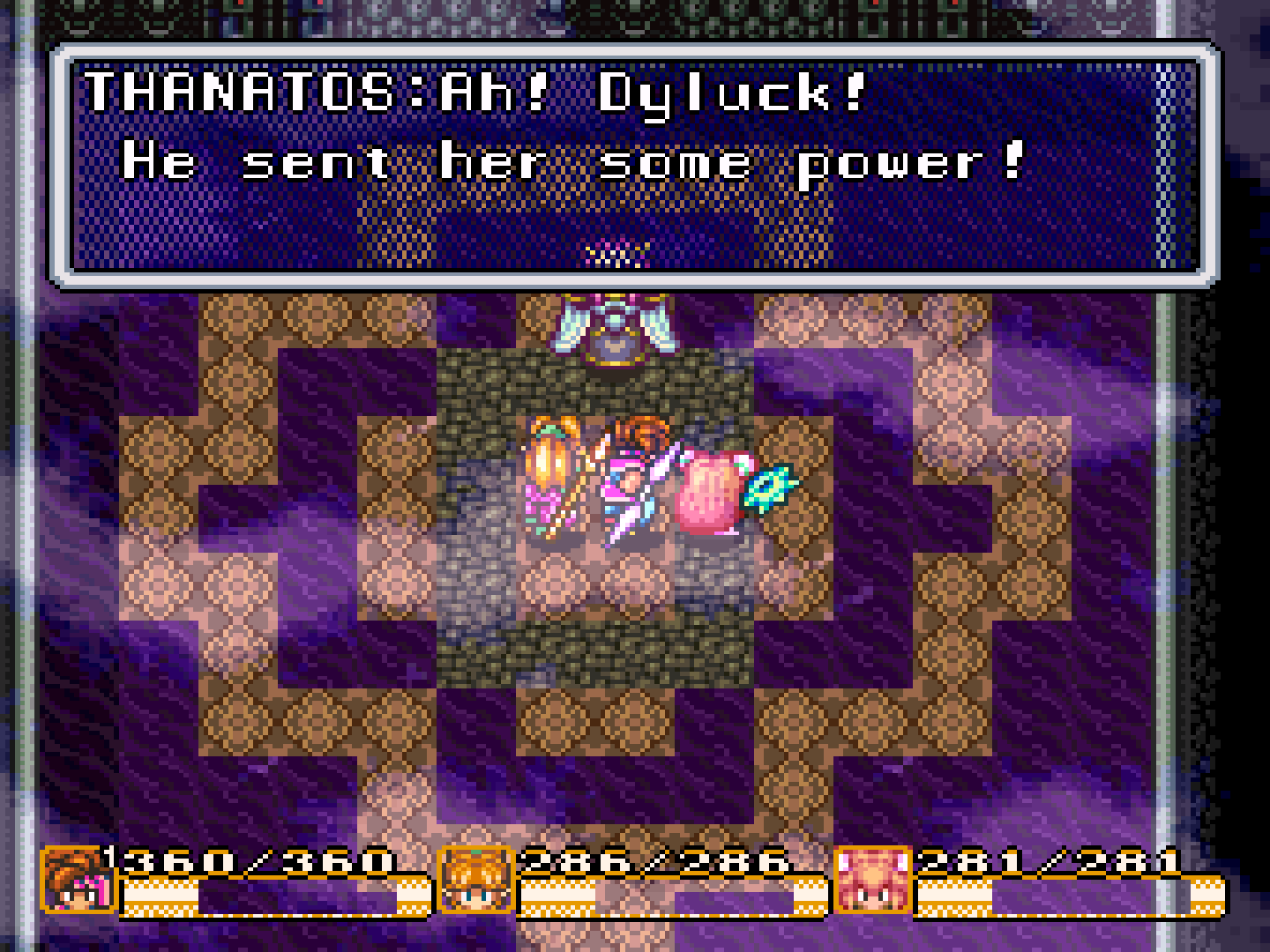 Looks like Dyluck's back to his former self after all!

Thanatos: "Who does he think he's toying with?"

Another voice fills the air...is it Thanatos? 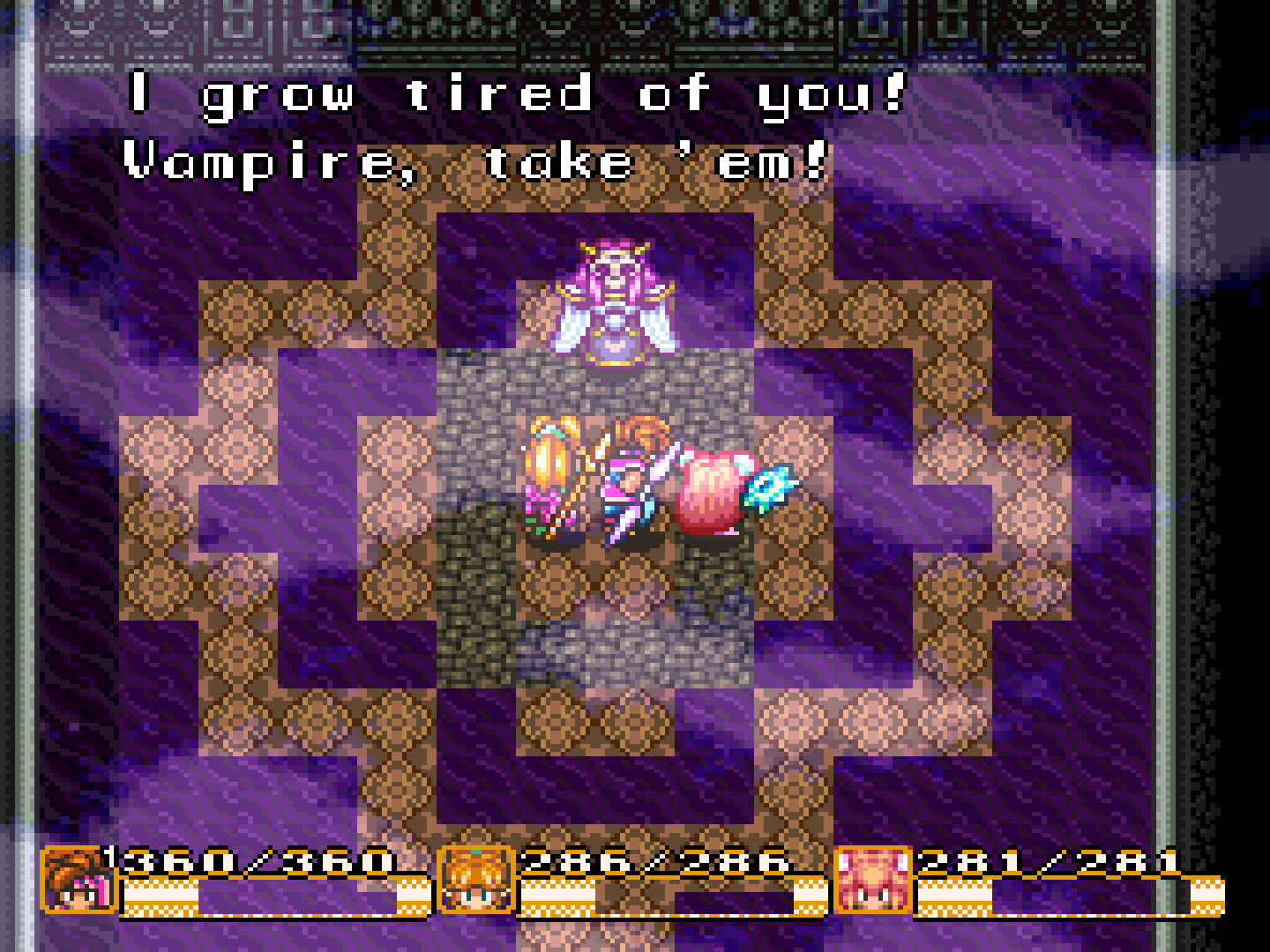 Max tries to cast a Fireball, but it doesn't connect! 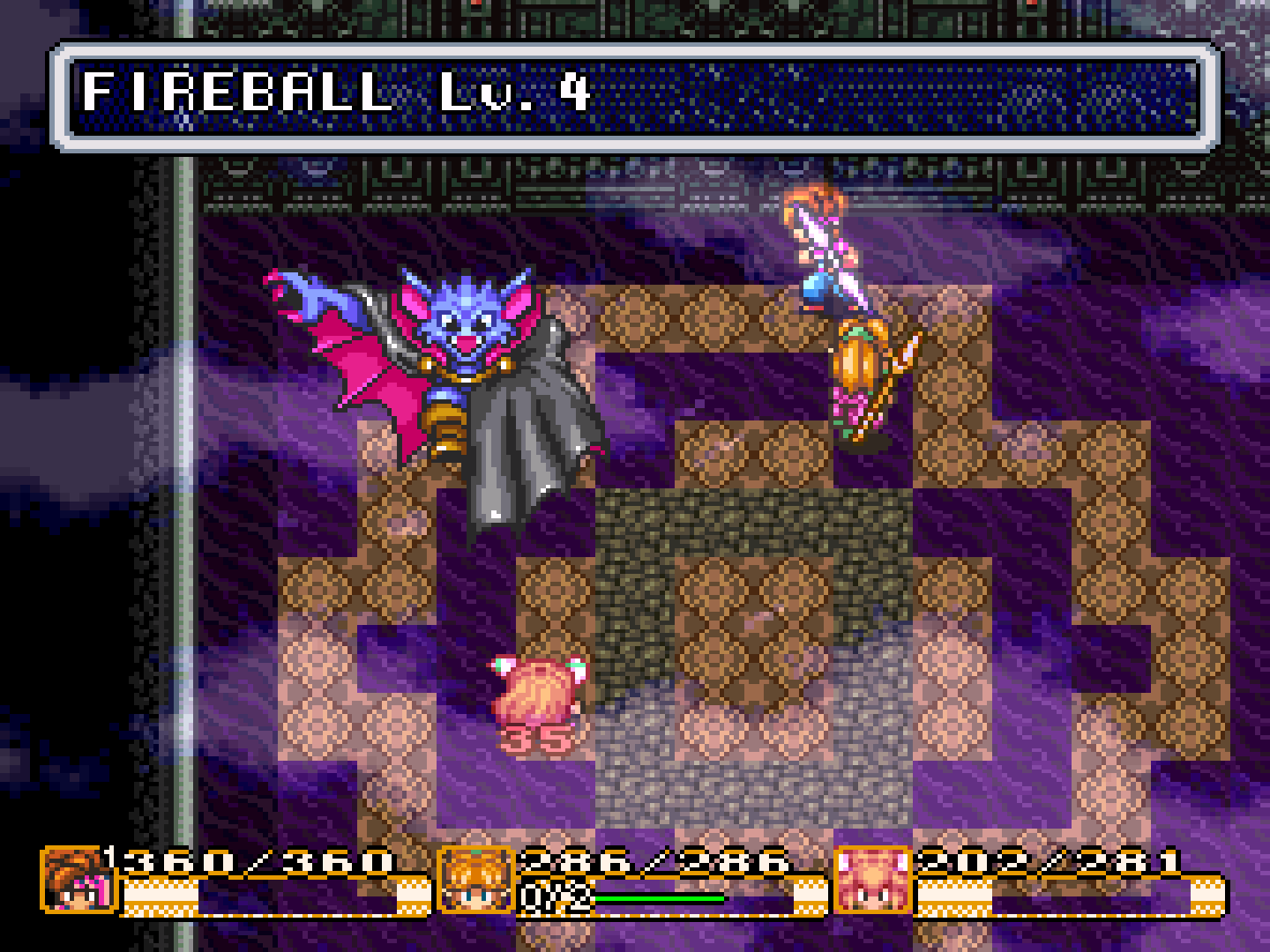 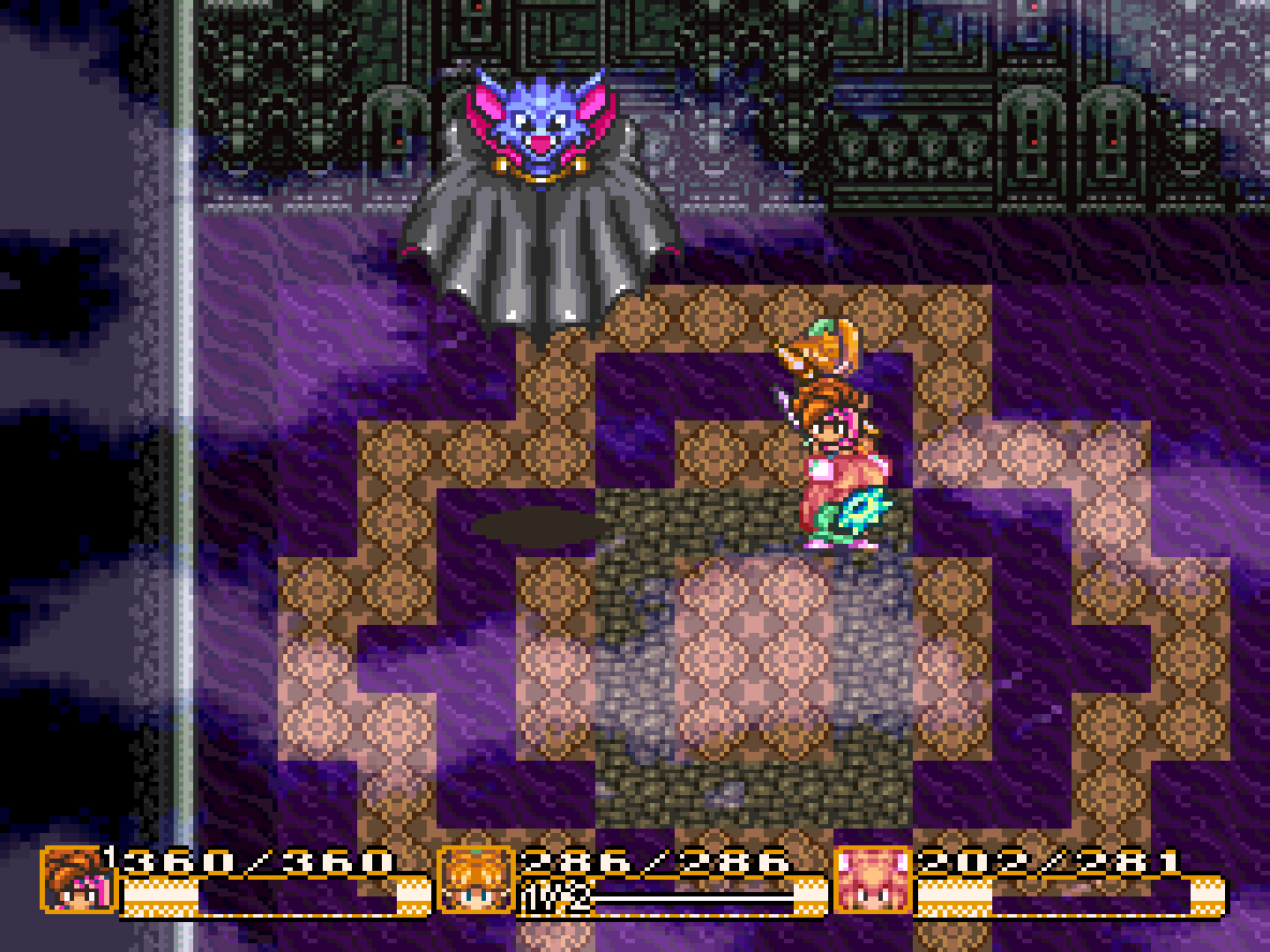 Now the Vampire floats around...

How do you attack this boss?

Another Fireball seems to do the trick.

Analyzing this monster, he's weak against the same kind of magic the Doom's Wall is...

He casts a freezing spell on Max!

Ah! While boosting Max's defense, the Vampire takes a bite out of Hero!

The Vampire's a quick, fierce jumper!

And he takes another bite out of Hero!

This boss can cast a wide variety of spells! He tries to Sleep Ring Pidge, but that fails!

What weapons can hit this monster?

The Bow of Hope is best for evil or undead enemies.

But it doesn't even work!

Every time Max fires a spell, the Vampire counters it with one of his own!

More spellcasting duels and running around...with some sleeping magic from the Vampire connecting...

There's the last of Max magic!

And after awhile, Pidge's magic is completely gone, and this Vampire's still alive!

When he's floating, he's untouchable to the party's attacks!

We continue attacking him the moment he touches down!

He can also poison the party with a touch too!

I use up the last of our Chocolate Bars, but then a miracle happens as the Vampire lands! 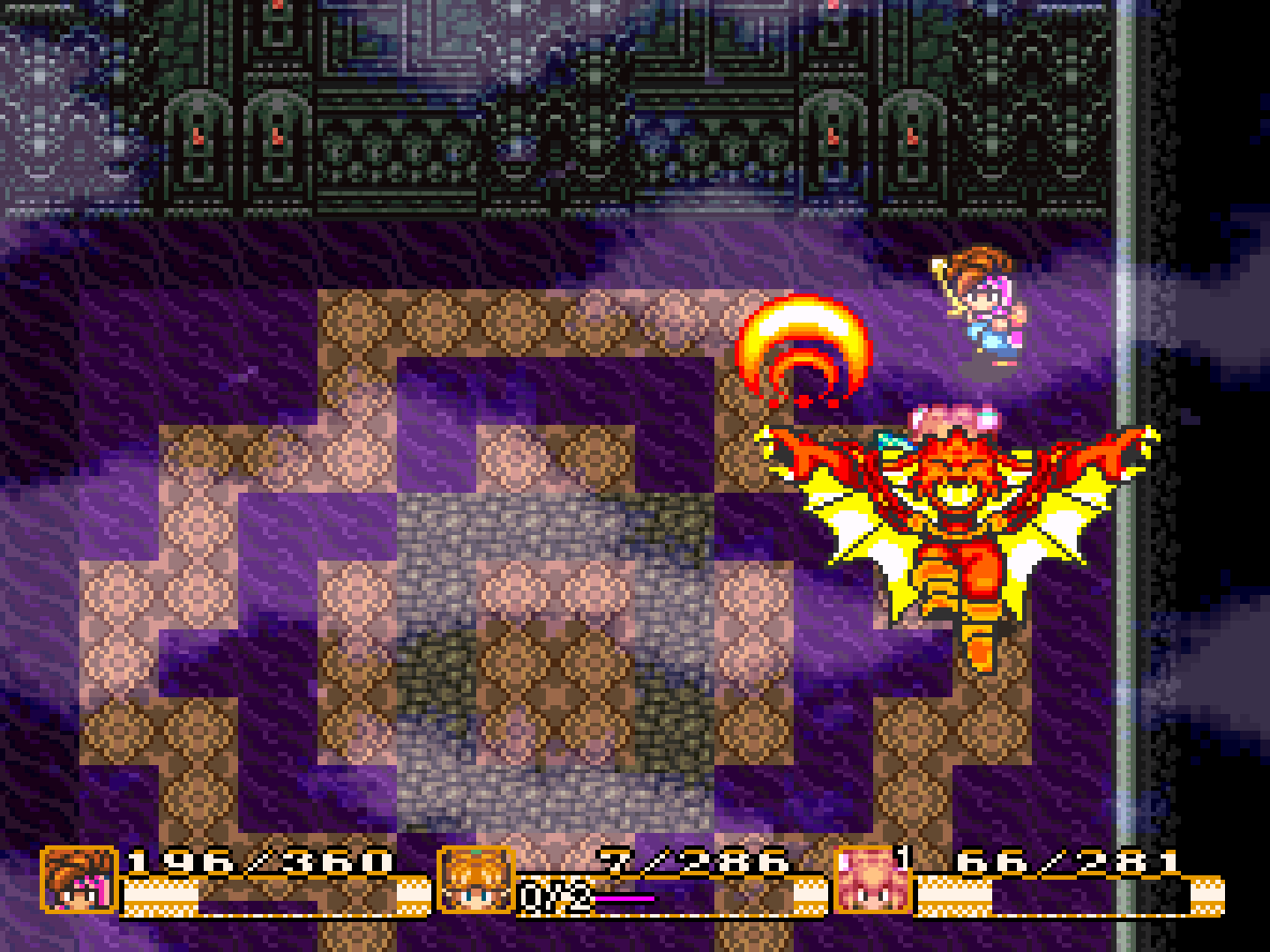 The Boomerang's Orb is our reward!

We go back to the dais, where Major Dyluck has vanished! Pidge calls out to Dyluck... 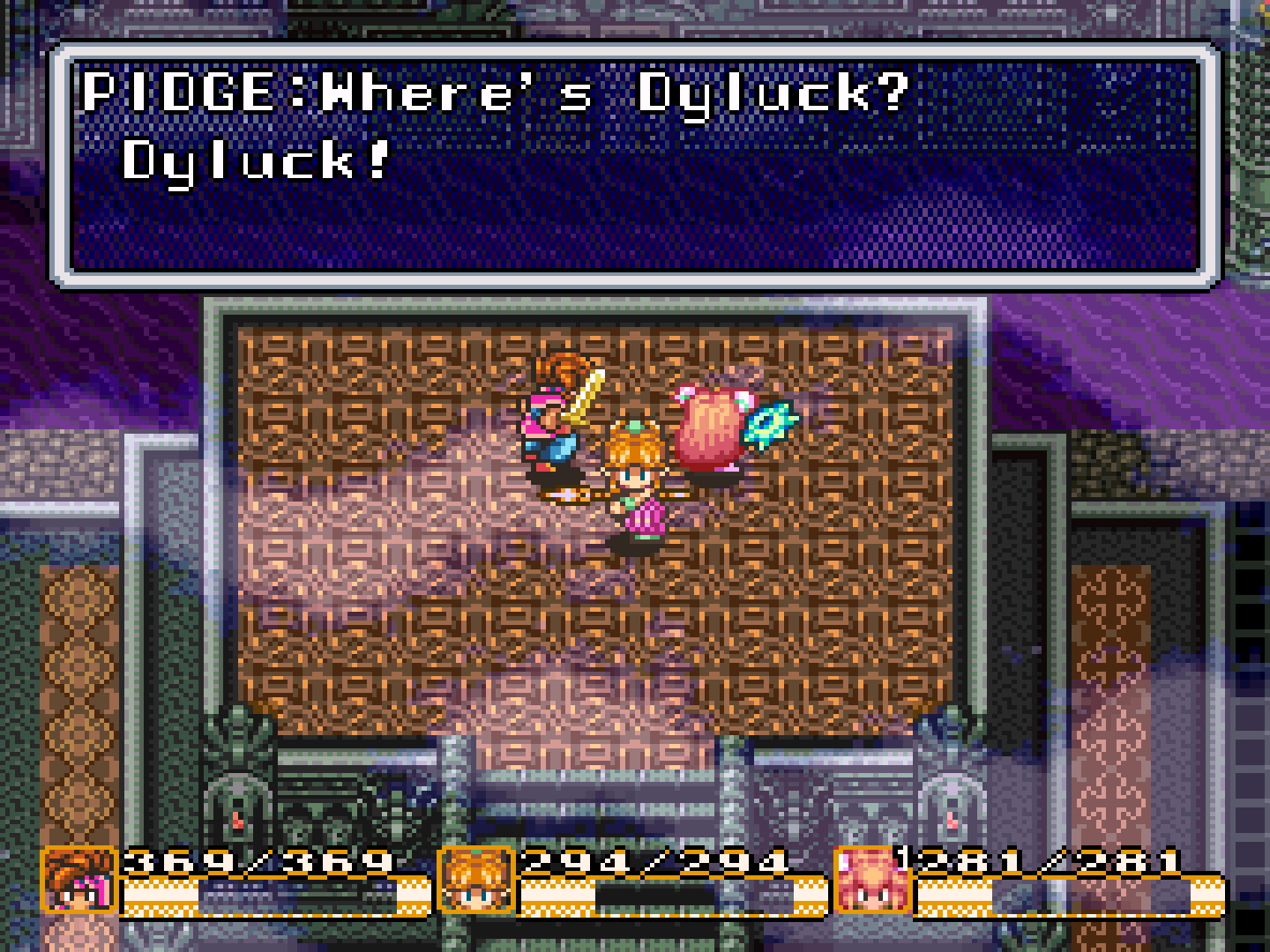 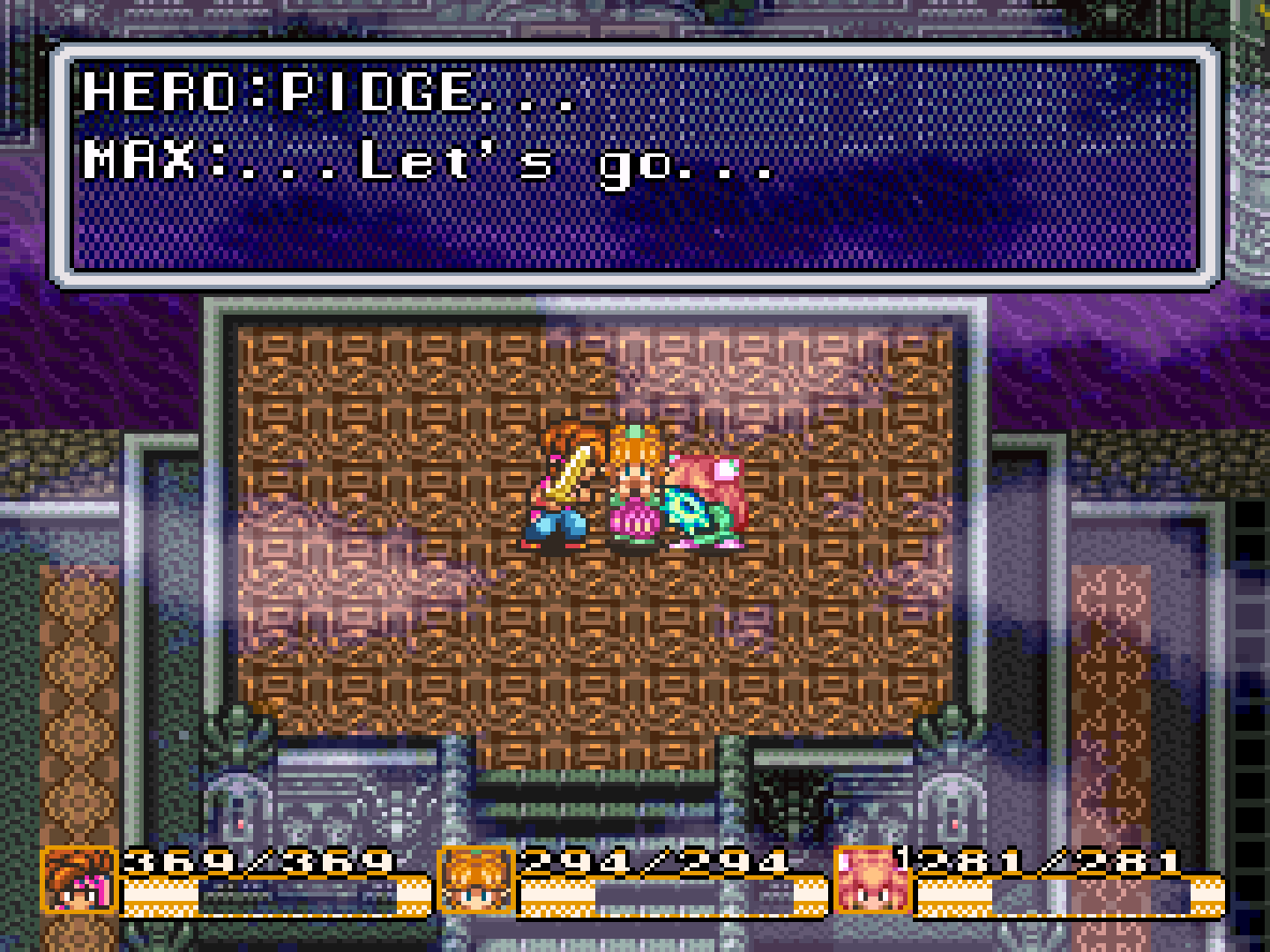 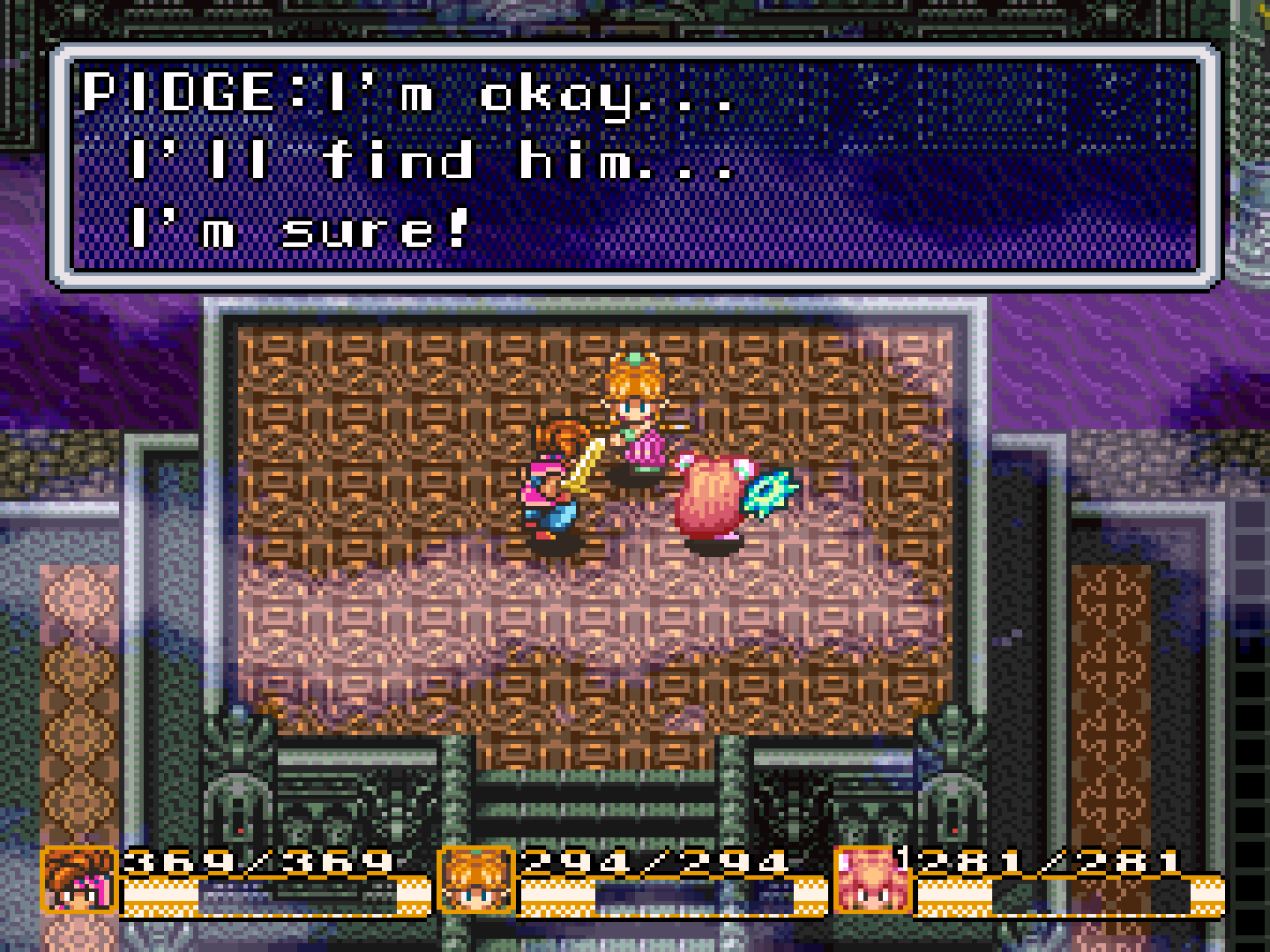 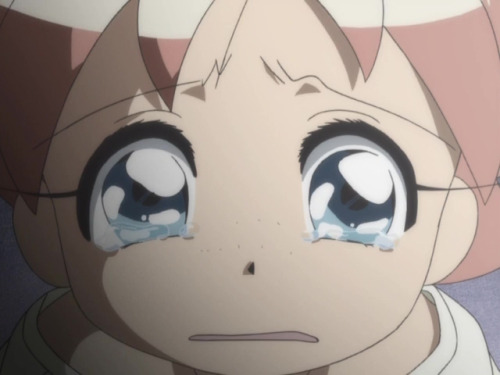 We head back to Northtown by Magic Rope, with me exhausted, both from the back-to-back boss battles and the aftermath...

Maybe Pidge struck the final blow on the Vampire since I was controlling Max when I healed her...

I'll be honest, that Vampire was the trickiest and longest boss I've ever faced so far in this game, whfg yvxr va Fjbeq bs Znan...