After reading an online guide, I decide to turn tail to the Dwarf Village because I forgot to get something there!

Aside: I accidentally got spoiled for one of the Elementals I might later get reading that guide.

On the way back, I seem to have given one of the Dinofish a Mickey Mouse balloon! 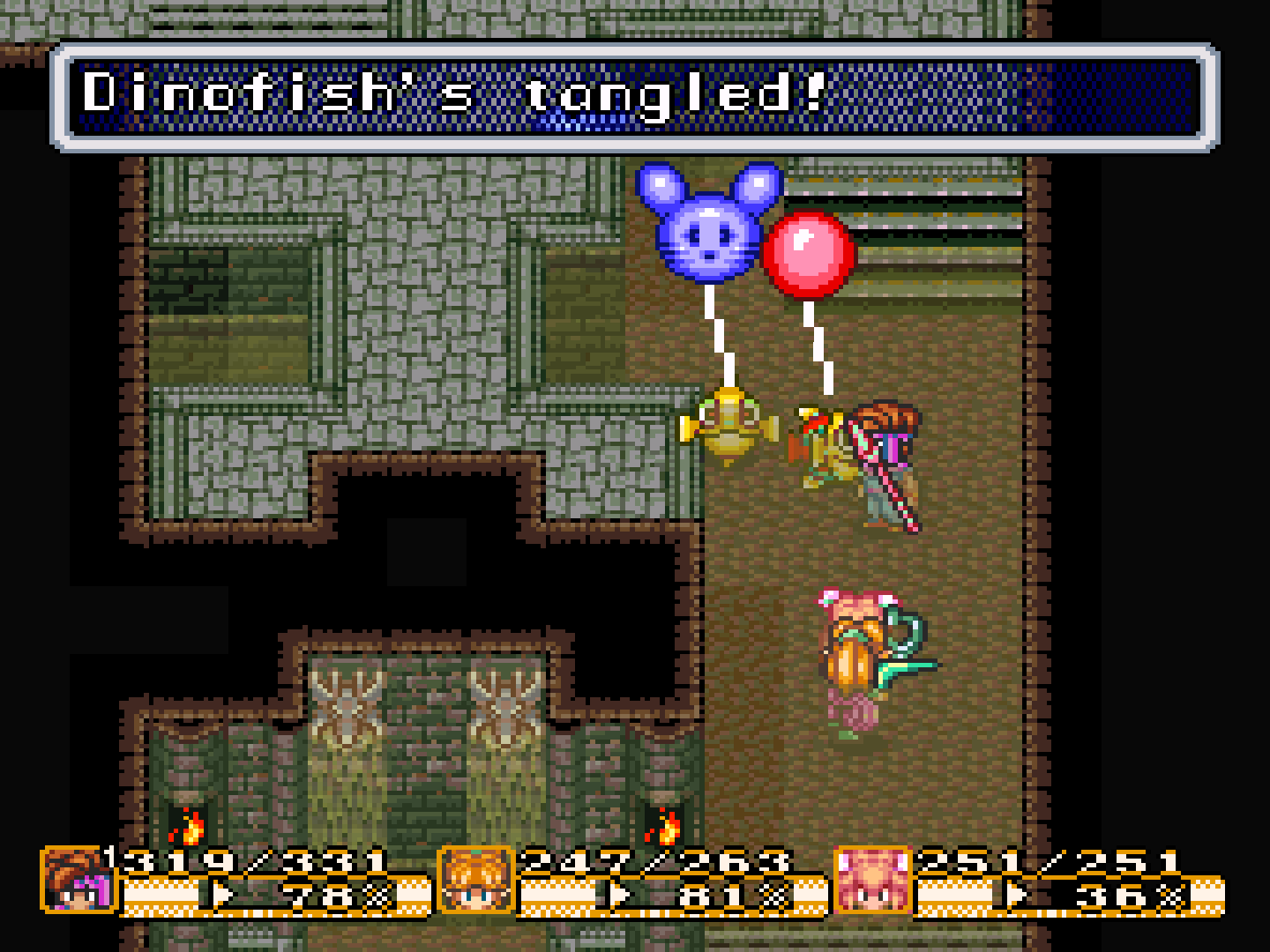 After a few battles in the sewers, the whole party's at level 30 now!

We make it back to Gaia's Navel and talk to the Elder near the big hole...he tells Hero he looks older, and gives us a Midge Mallet! 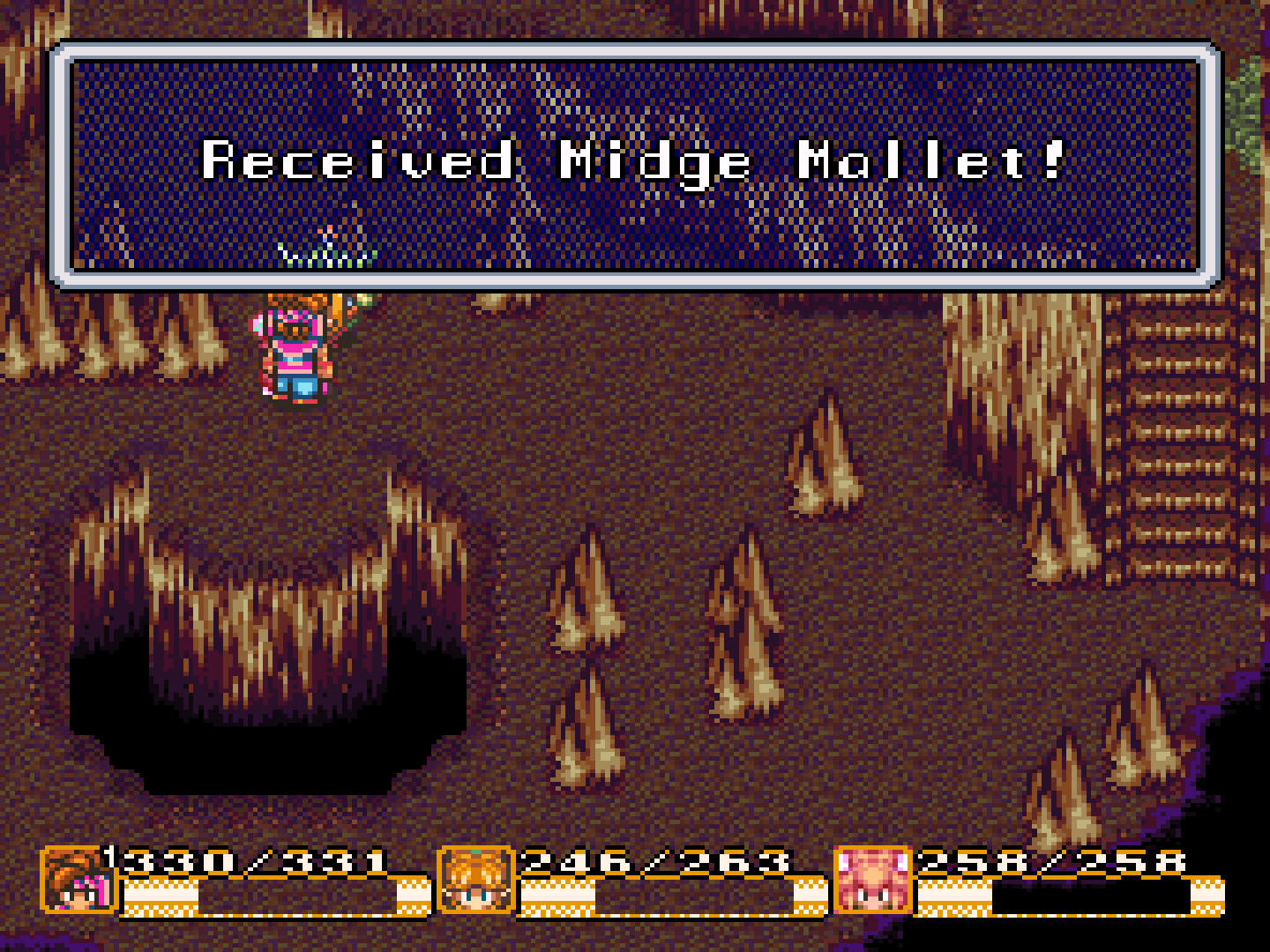 So the Elder used that mallet to shrink Max during his performance in the exhibit show, huh?

I accidentally fall into the hole, where the Scorpion Army's ship is!

Using the Magic Rope, we escape getting stuck there! 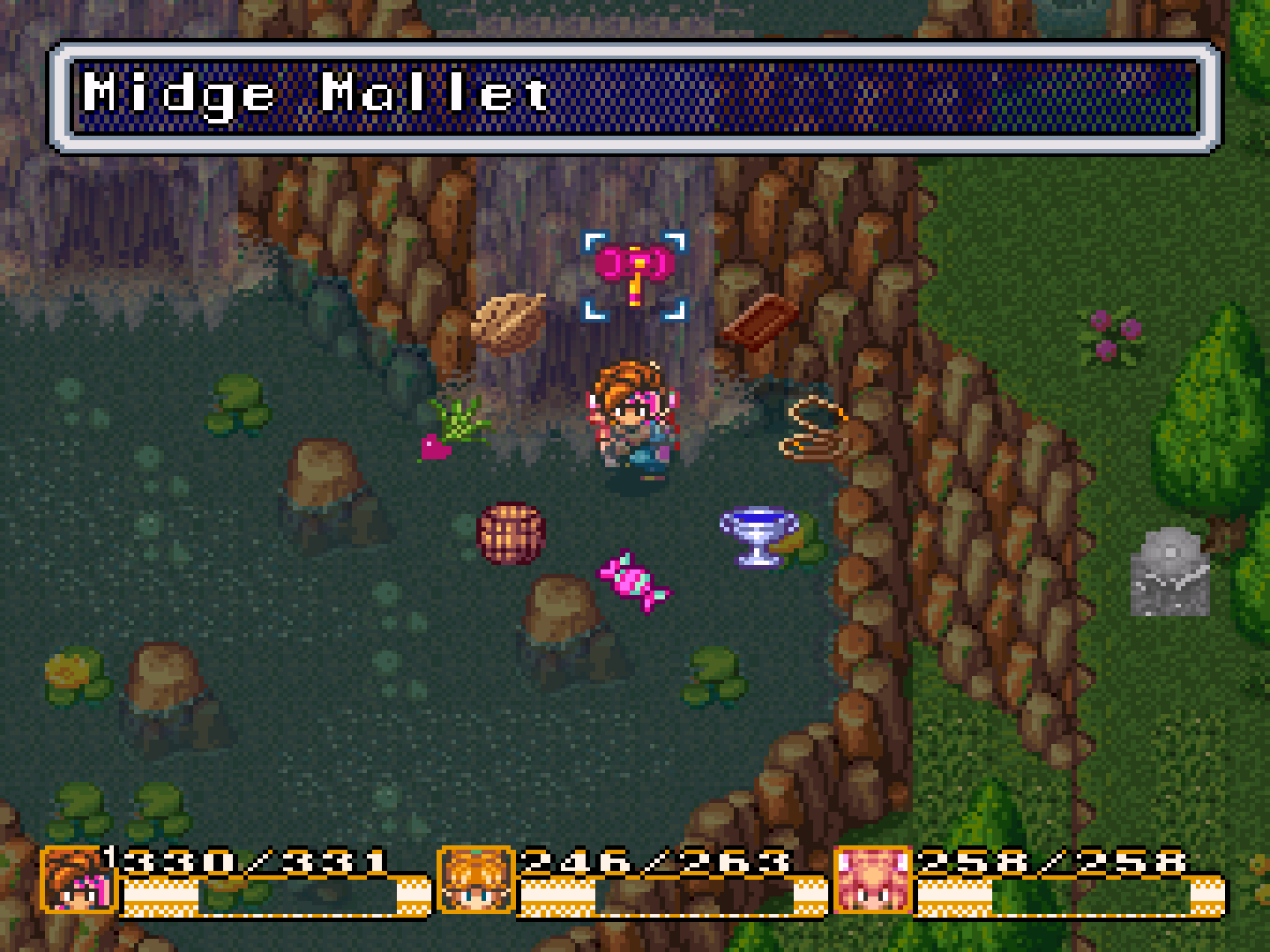 Now to return to Northtown...

The Cannon Guy that took us to Kakkara apologizes for sending us in the middle of the desert.

Looking at a map online, the Empire's in the continent just southeast of Ice Country.

Half an eternity later crossing those dangerous sewers, we make it back to the city!

After resting at the inn, we talk to Watts, who can sense the Empire's brewing inner turmoil. 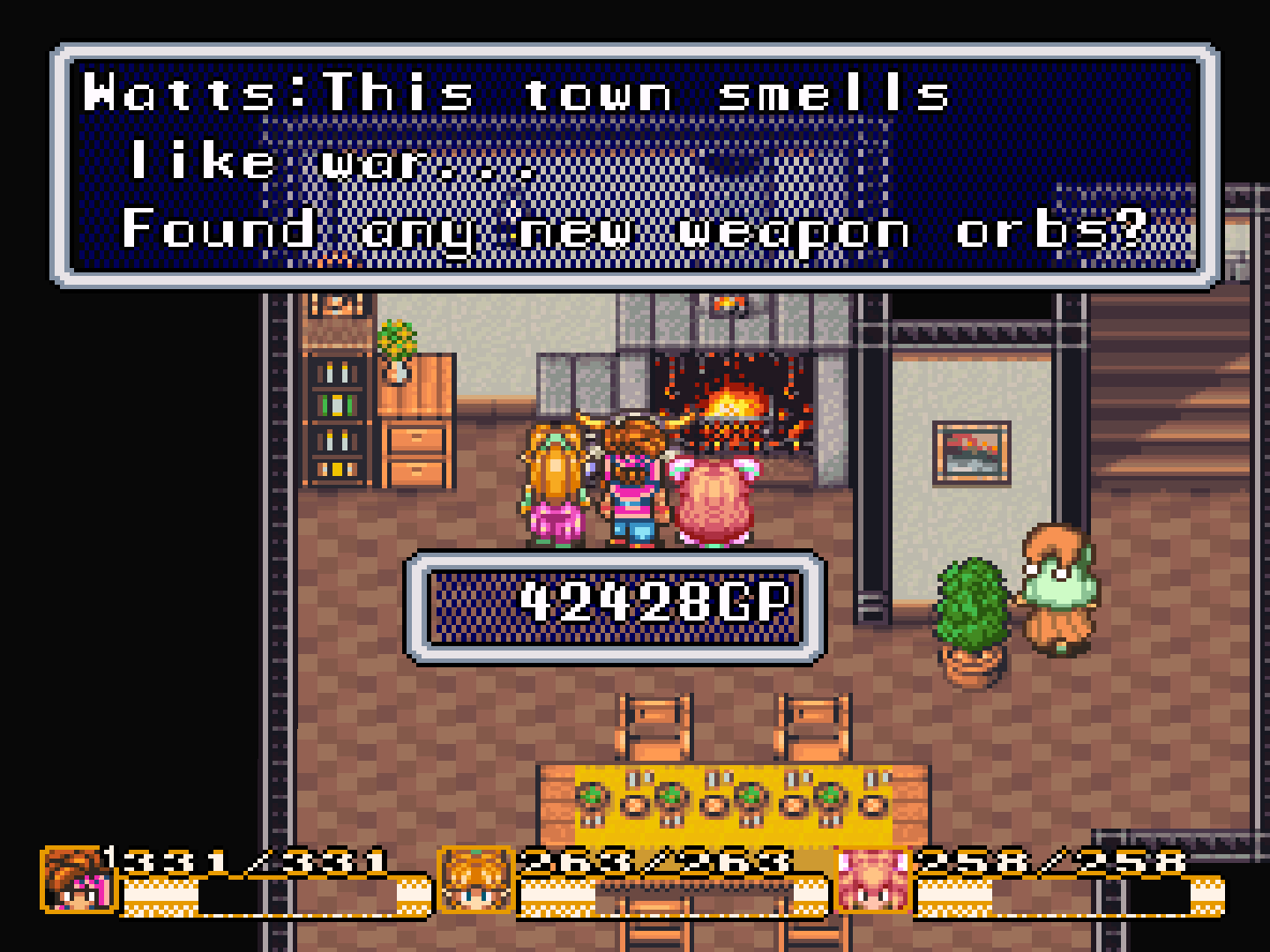 We upgrade our remaining weapons.

In another house, an old man tells us about "something hidden in the coral to the south!"

Another elderly man outside's looking for his wife...

We check at the wares at the armor shop here: a Frosty Ring, a Tiger Cap, a Tiger Suit, and a Tiger Bikini are the newer wares, along with a Ruby Vest, a Quilted Hood, and a Golem Ring to fill out the list.

We restock on recovery items and check out the rest of the city.

The northwest exit leads to the Empire's castle.

We talk to a girl who says that someone named Phanna gave her candy. 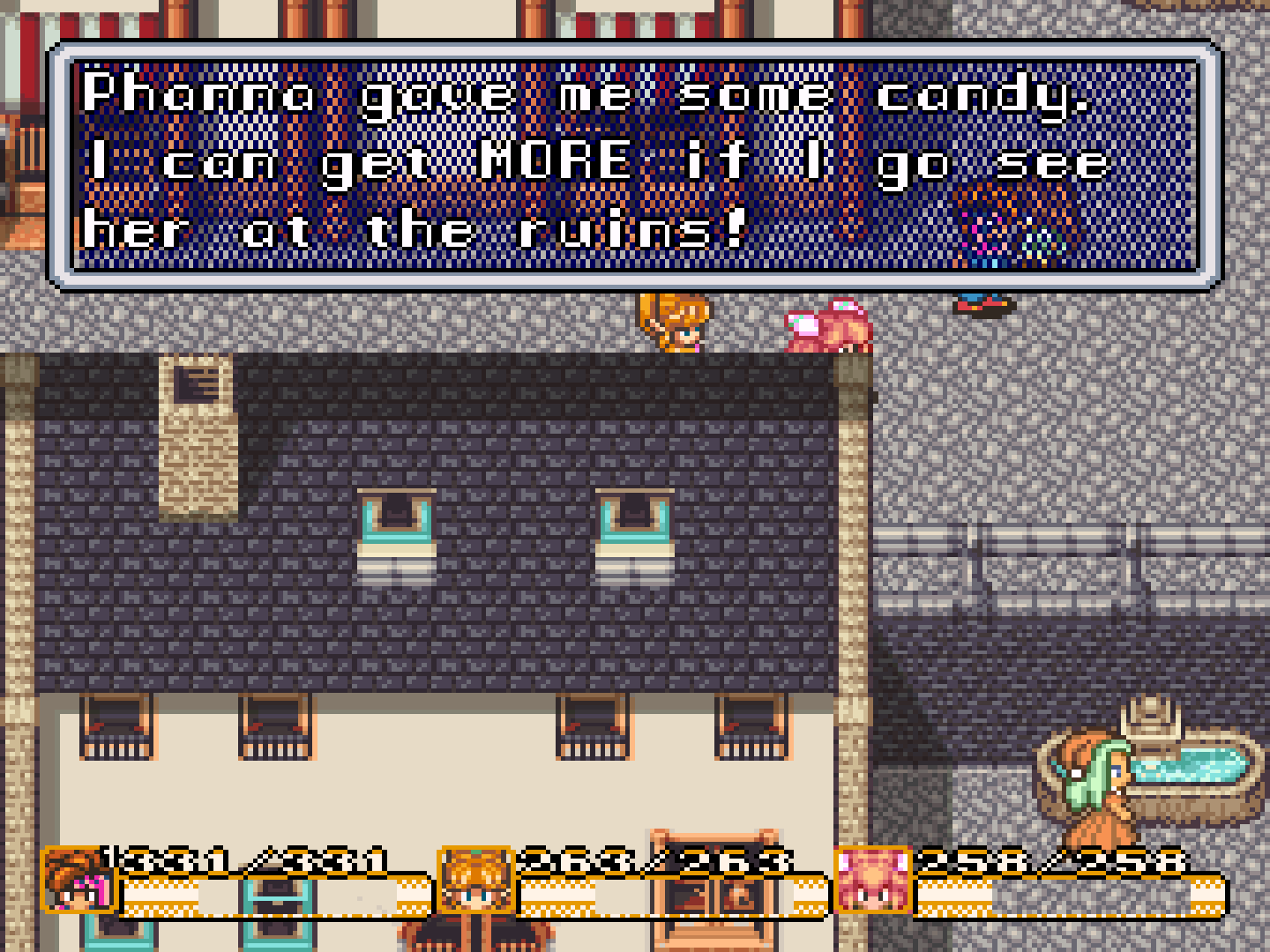 We find the elderly man's wife. She's not talking...not this again...

Inside the big house, a mustached man's concerned about the motives of the Emperor. I agree with him. 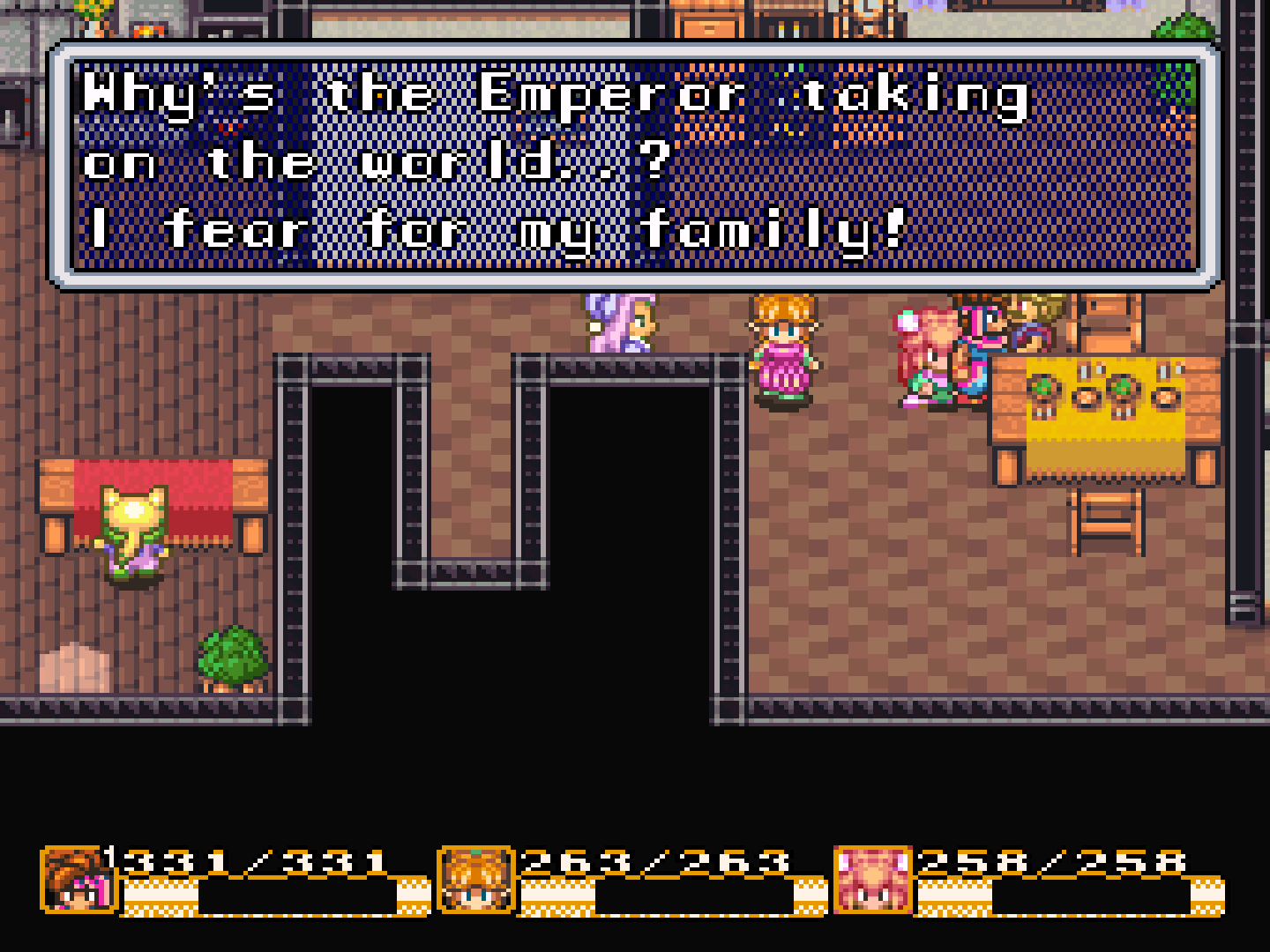 The house has got a top-of-the-line kitchen!

There's a little sister and an older sister upstairs. The older sister feels unprepared for the Imperial party...

There's not enough beds in this house to fit the whole family!