The waterbed in town's still dried up...

The nobleman next to the king tells us that "Mana is growing weaker." He tells us that in order to restore the water in town, we need a certain item. 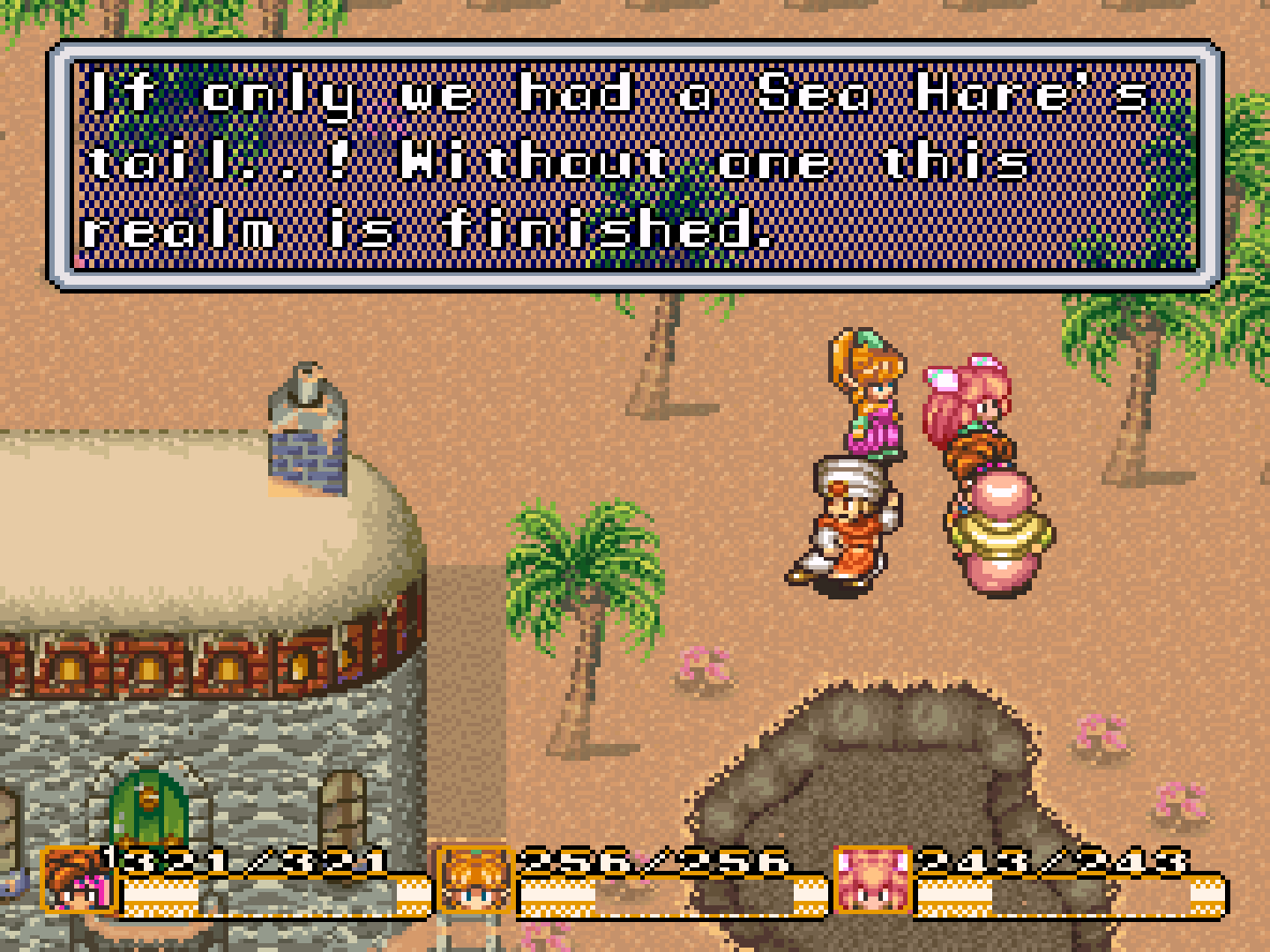 The dancer in town's proposing to move to the Empire...

Dancer: "Now even Cannon Travel has a route there!"

It seems I have six weapons to upgrade. But which one needs it?

I upgrade the Sprite's Spear and Stout Axe, which become the Partisan and Battle Axe respectively!

Now for the Long Bow and Light Trident, which become a Great Bow and a Lode Javelin!

Here's my weapon stats so far: 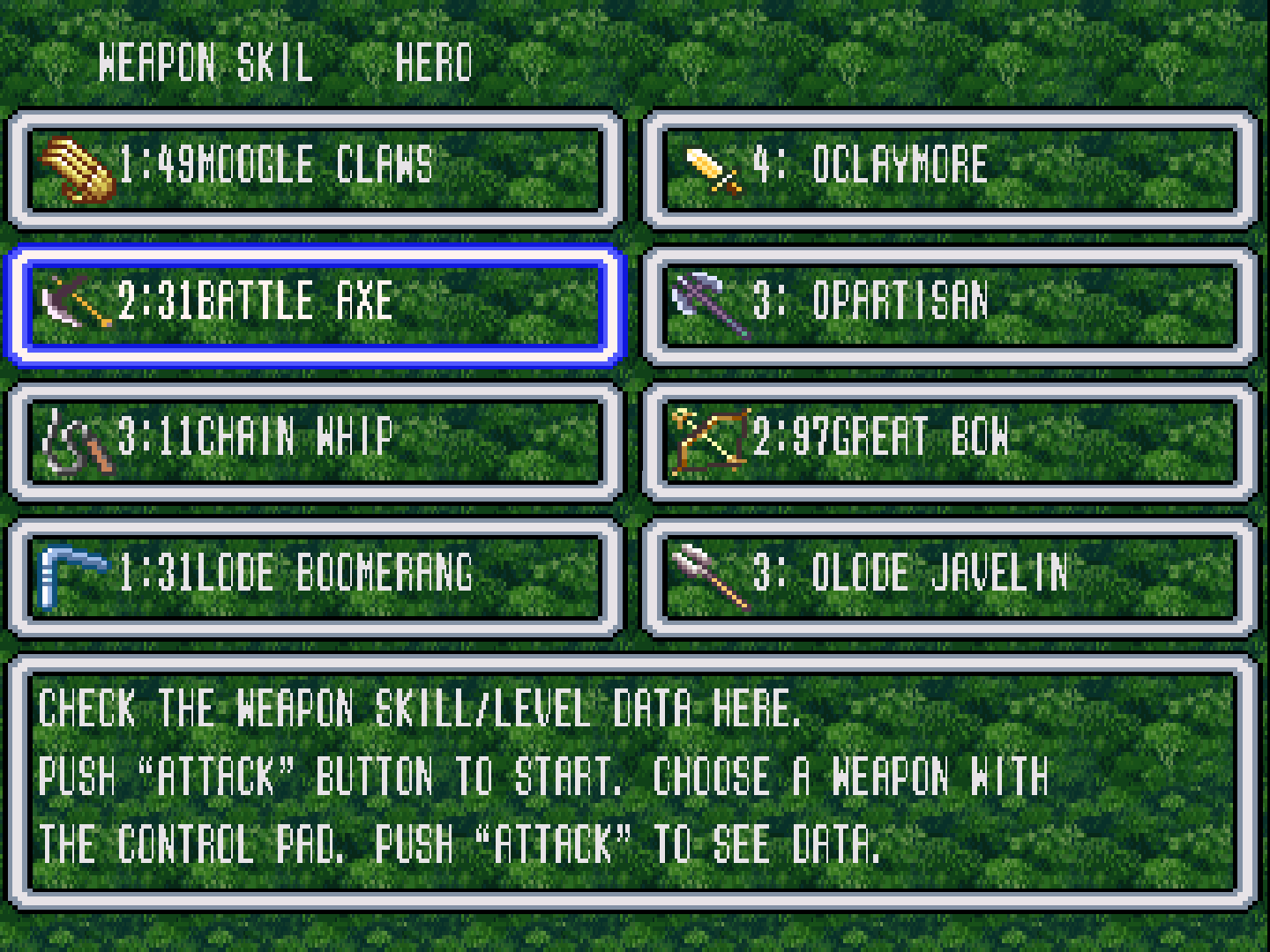 So the Partisan (which now looks like a light double-sided axe instead of a spear) is useful against slimes and lizards, the Battle Axe against plants and fish, the Great Bow causes confusion in enemies, and the Lode Javelin balloons them!

The Cannon Guy here now has three destinations for us to choose! 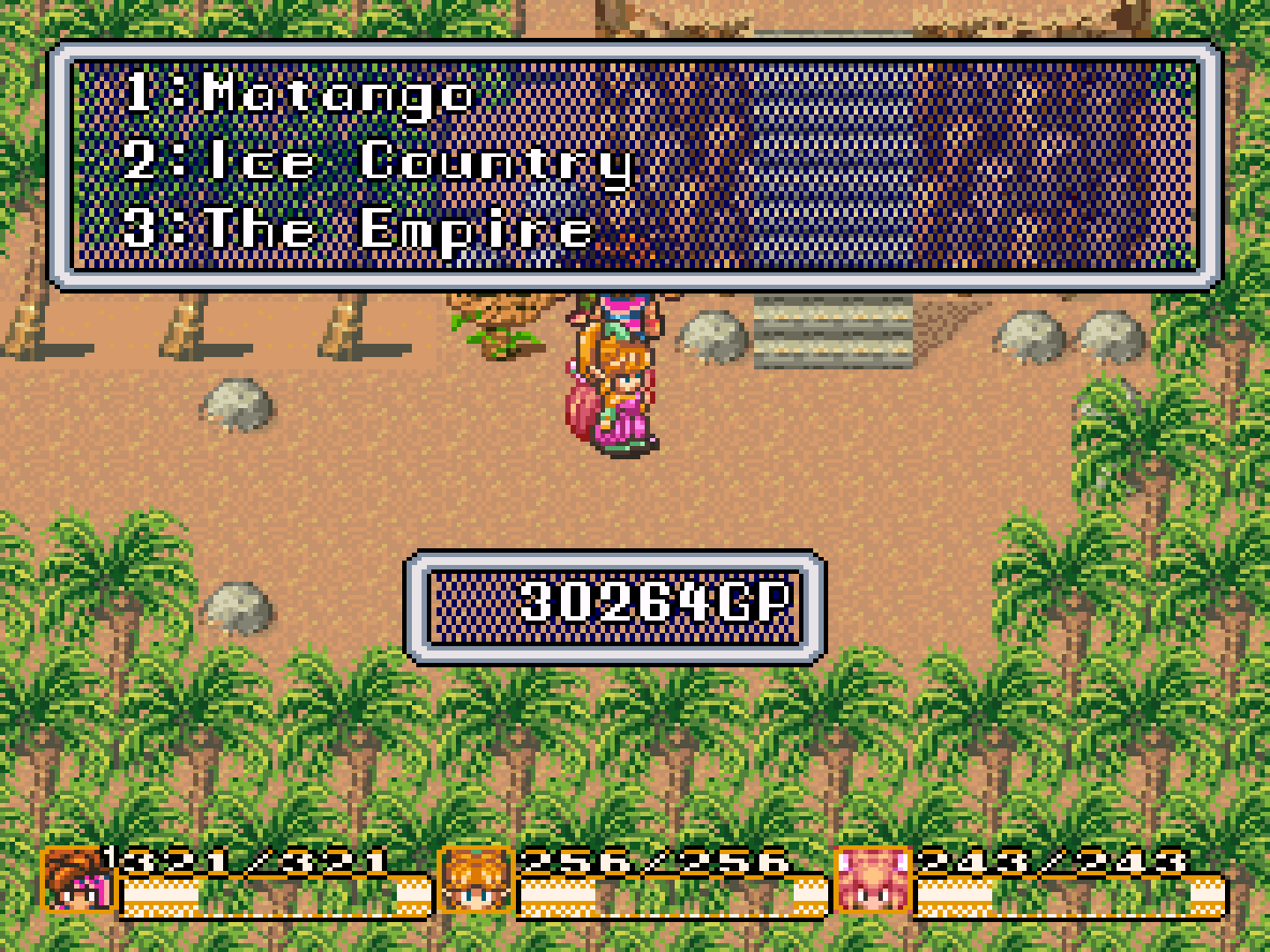 It looks like we'll have to take a trip to the center of everything evil...

After buying an herb, we go to the Empire...

The Cannon Guy advises us to "keep a low profile" there. Since Thanatos might have told them about us, that's to be expected... 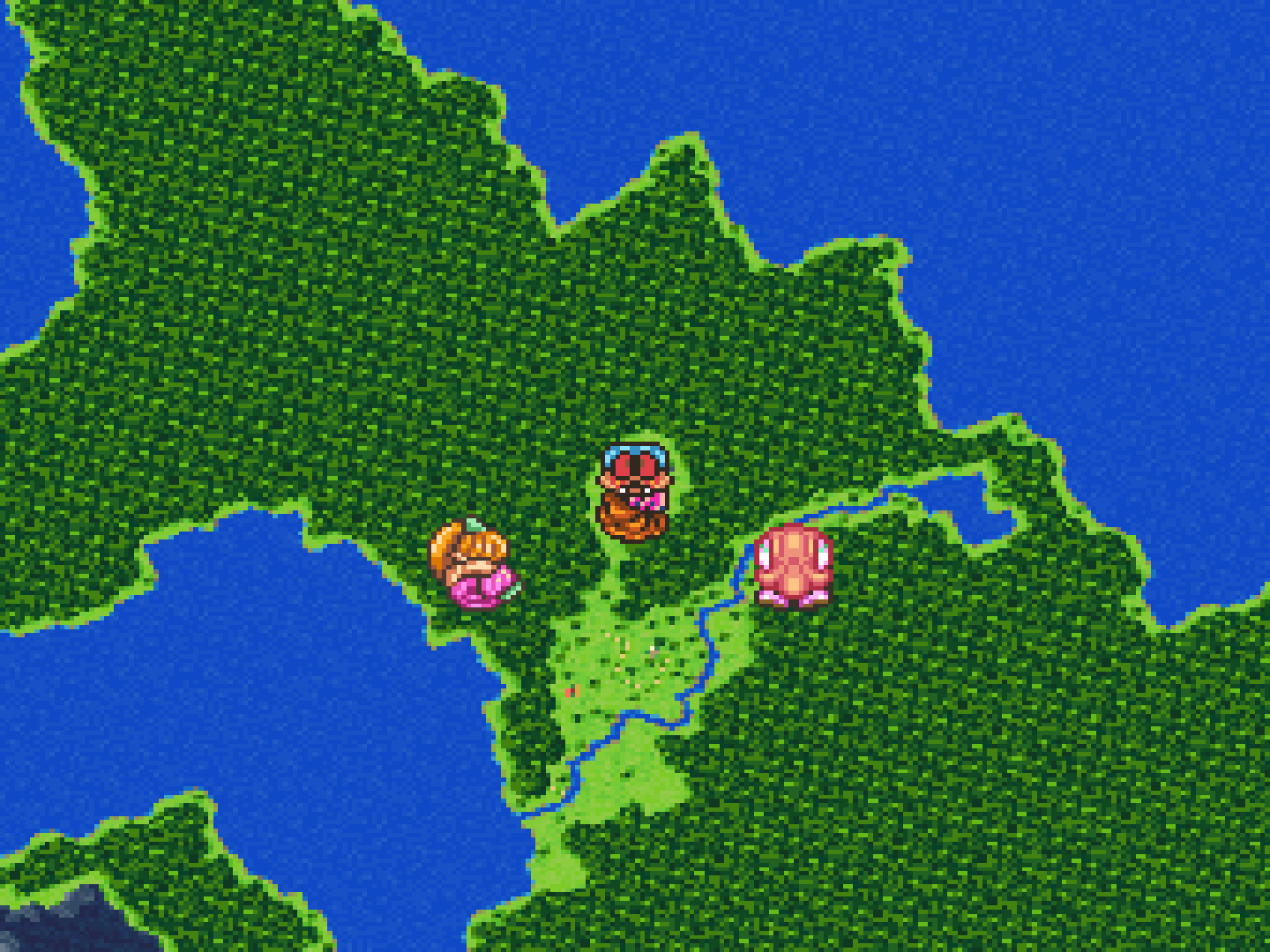 We descend on the top of a mountain where a castle's perched...

But we land on green grass near another Cannon Travel station! 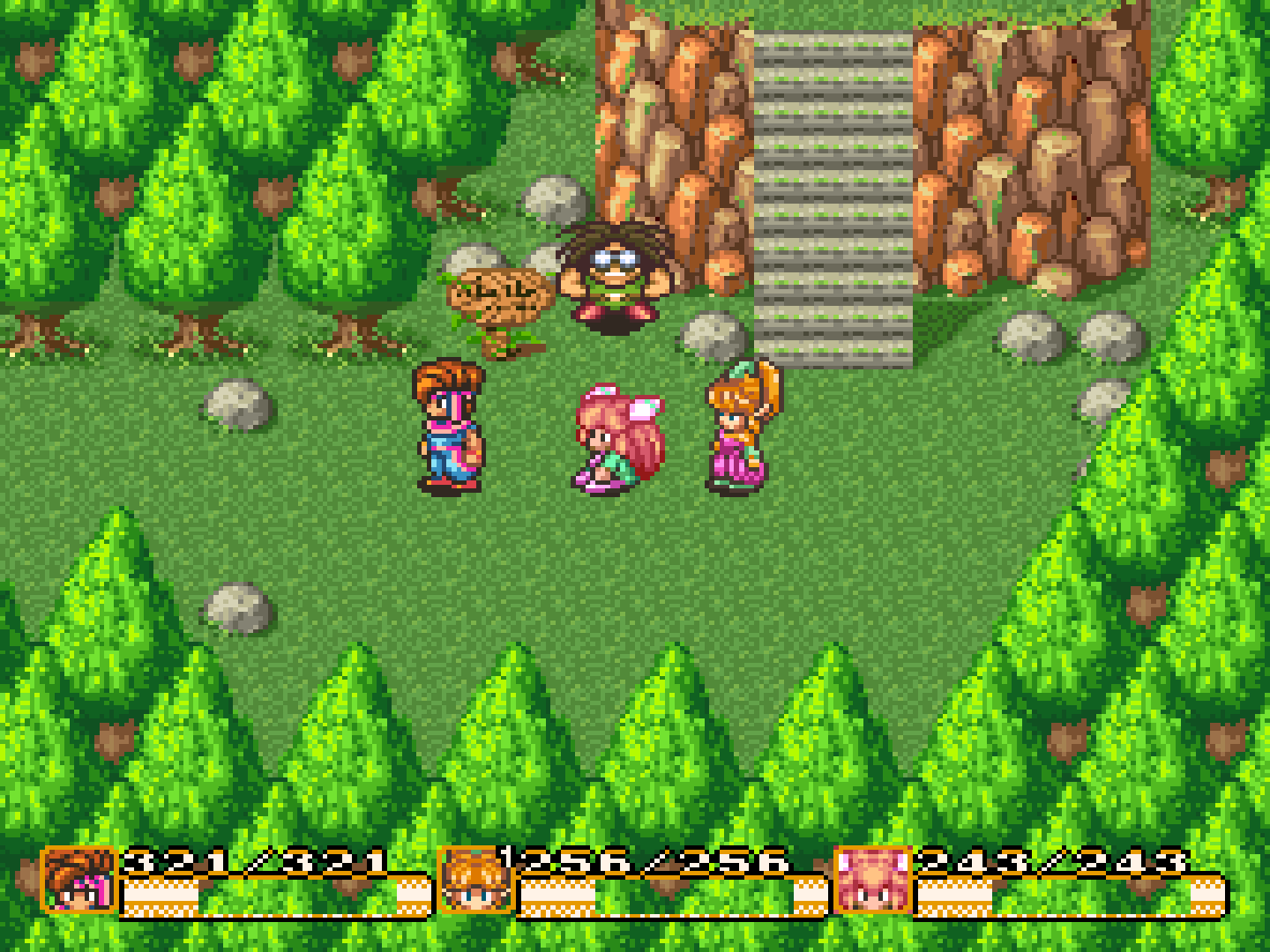 The music for the Empire's pretty happy-sounding.

Aside: After looking at the online map, I realized we landed near the cannon station, not on a castle!

We talk to a guard, who tells us were in the Southtown of the Empire.

Someone tells us a woman named Mara lives in the suburb like house before us. He doesn't have anything good to say about her though... 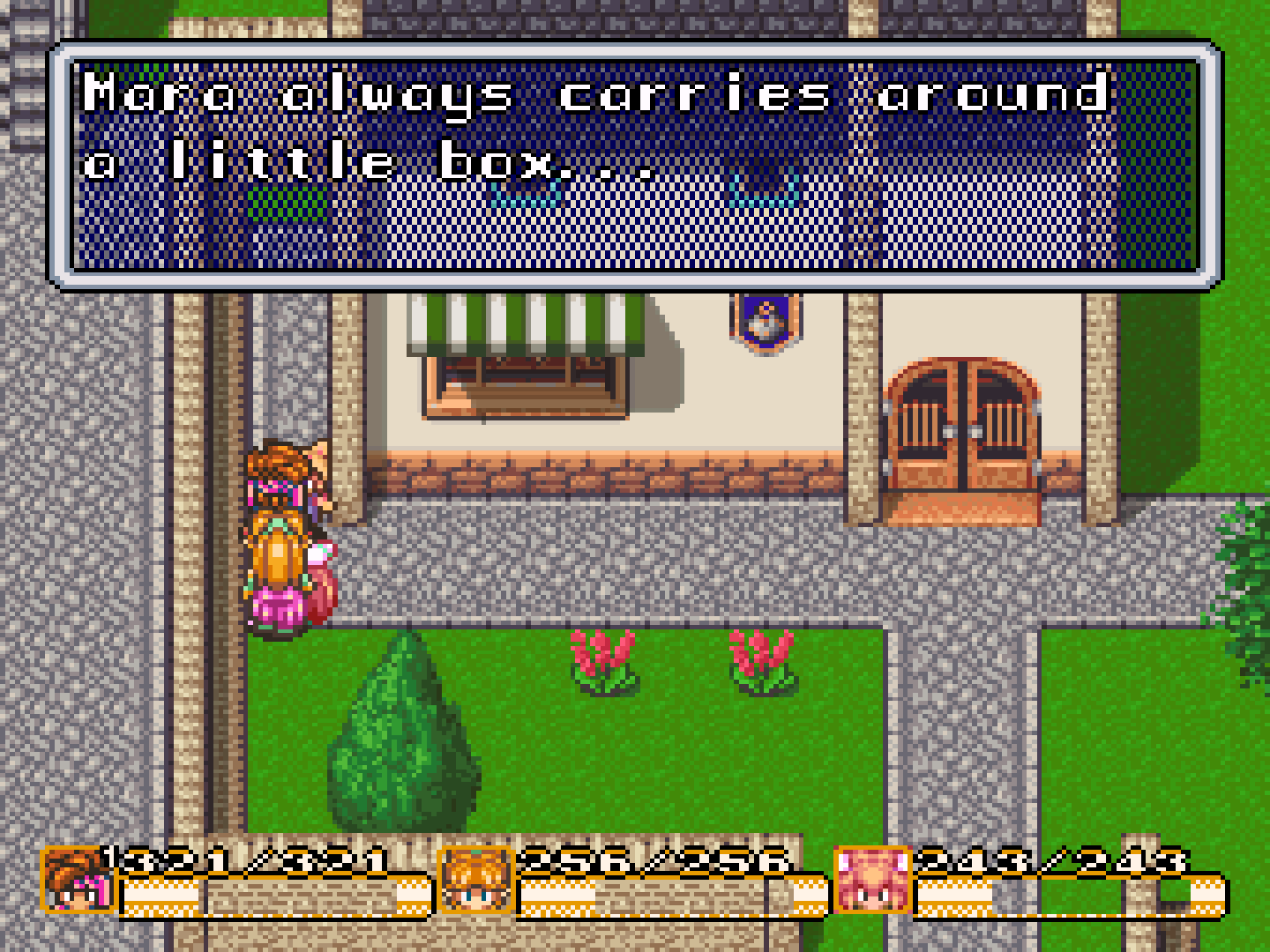 The house we first see looks like something out of Earthbound, since it wouldn't be too out of place in that game.

Aside: I have not played Earthbound, though I've seen some pictures of the game online, and used a tileset from that game for one of my small projects. I might play that someday.

Southtown looks so clean and green, though the place is walled up.

An elderly citizen gives us a glimpse about the mindset and politics of the Emperor. 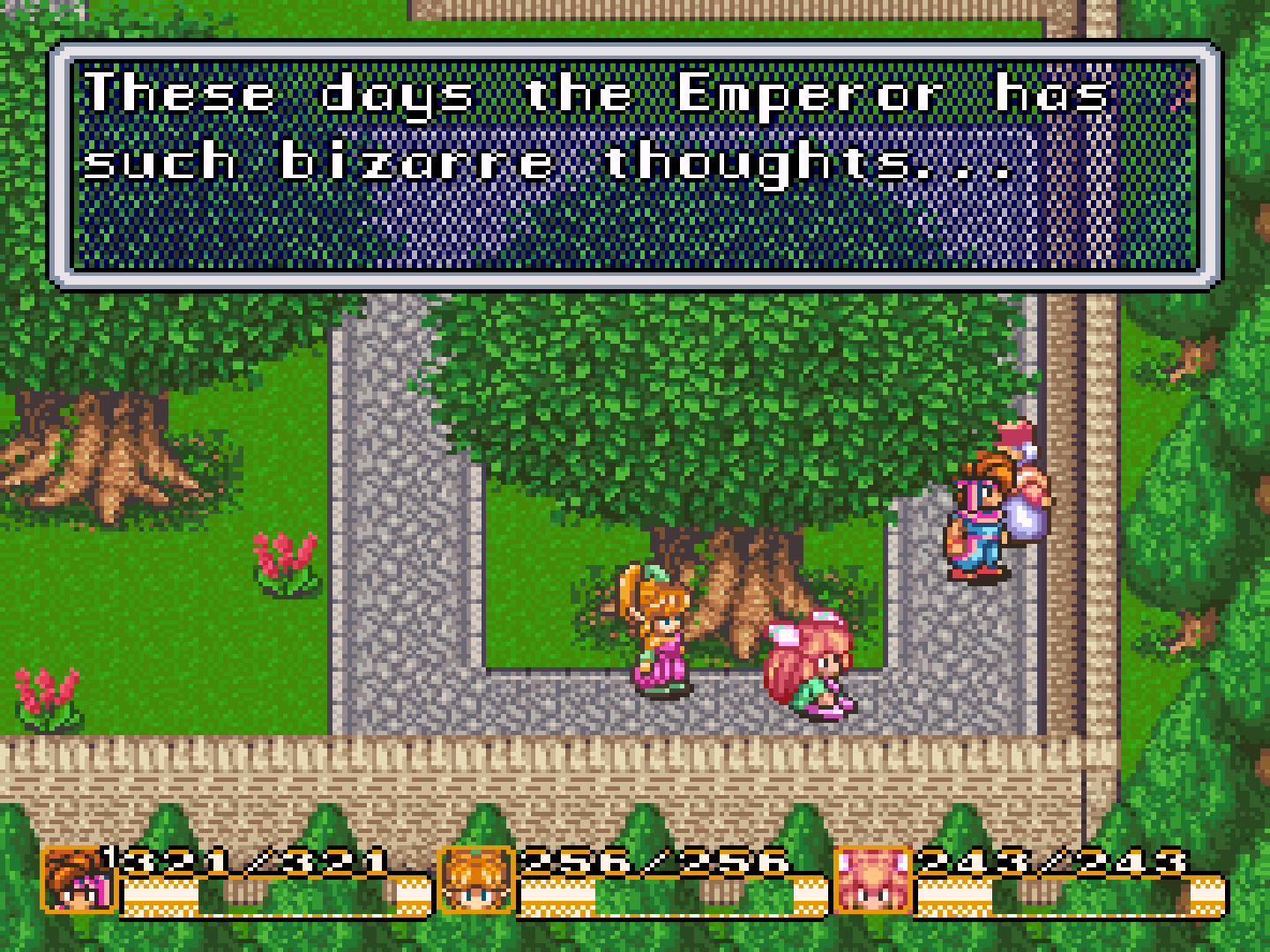 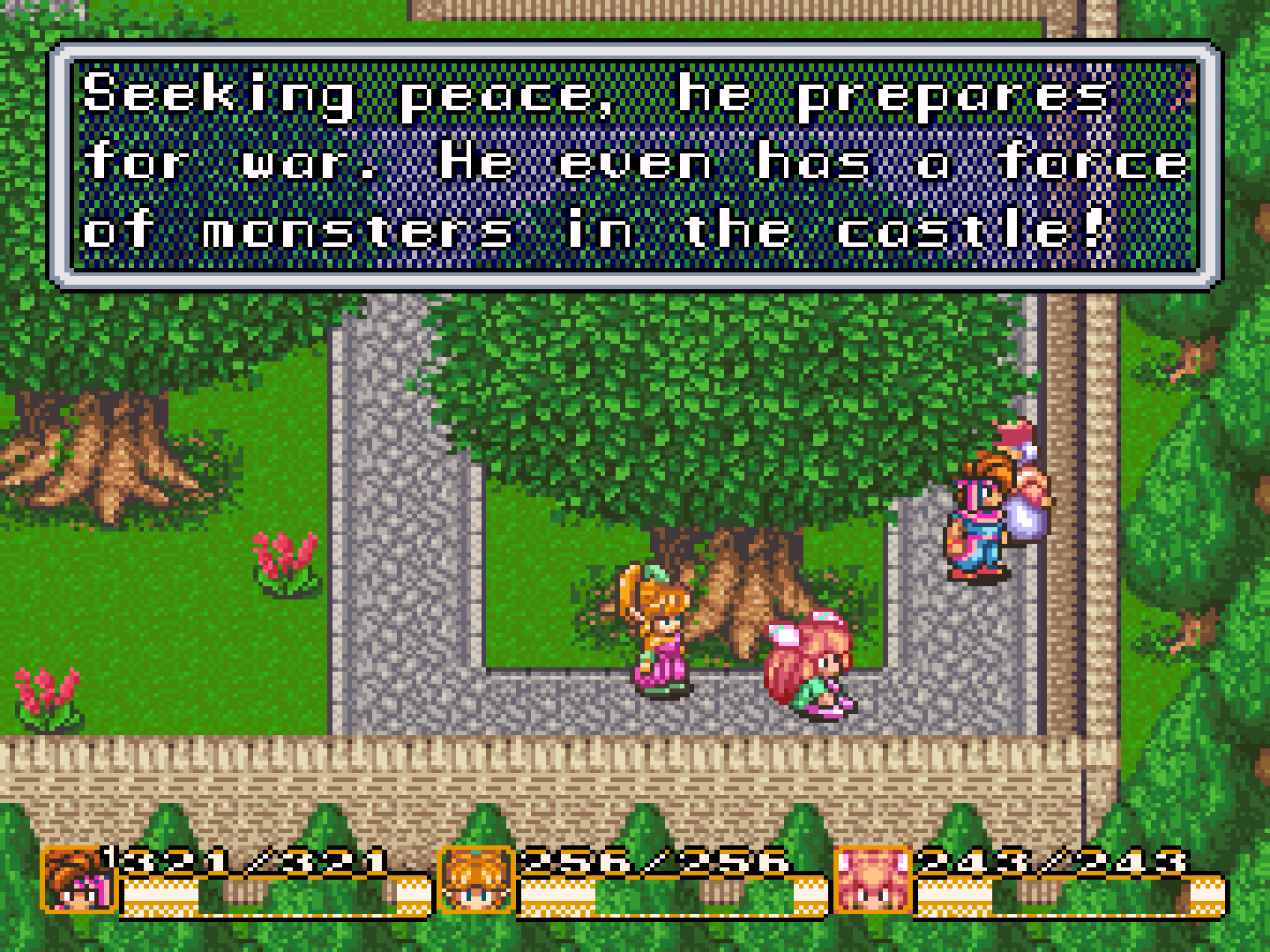 Why does the Emperor have monsters when he wants peace though? Unless it's for not-so altruistic reasons...

As we wander to the east of town, a guy with a headband sees us and wanders off. I thought my controller stopped working at this point...

We catch up to the guy, now guarding a gate. He tells us to go away fsr.

Inside the two story house, there's another dancing innkeeper, and the room looks more like an infirmary than an inn.

I save here before going upstairs.

Upstairs, I check out the shopkeeper's wares: he has a Golem Ring, a Ruby Vest, and a Quilted Hood in addition to previous stuff.

I buy the three new pieces of equipment.

After making some equipment chgs and selling some, I head out. Northwest of town, there's an old woman who goes into the small house behind her...

Another lady near the wall tells us "Southtown's not as big as Northtown."

I go in the small house where the elderly woman went into. 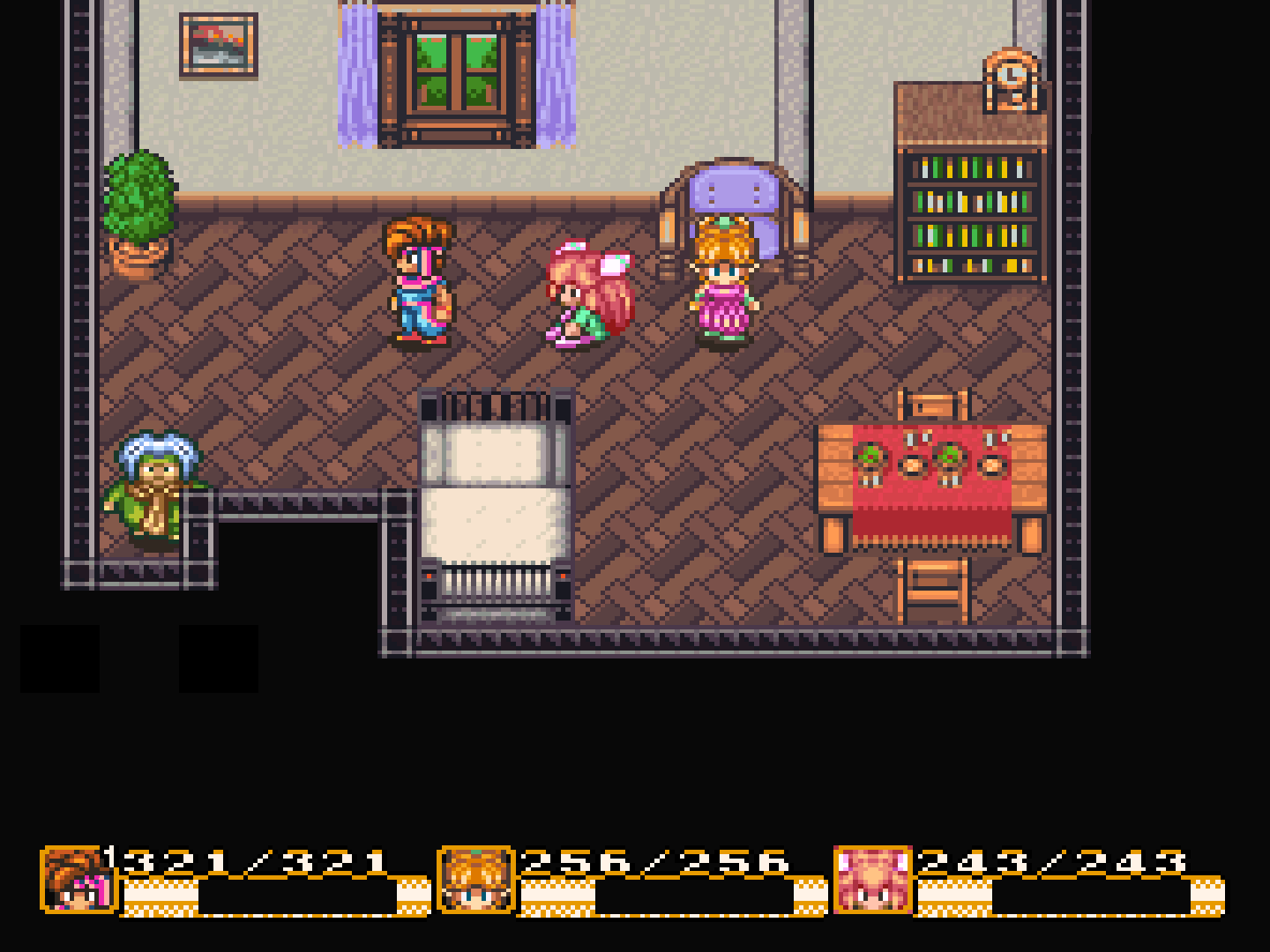 We talk to the old woman. It's Mara! 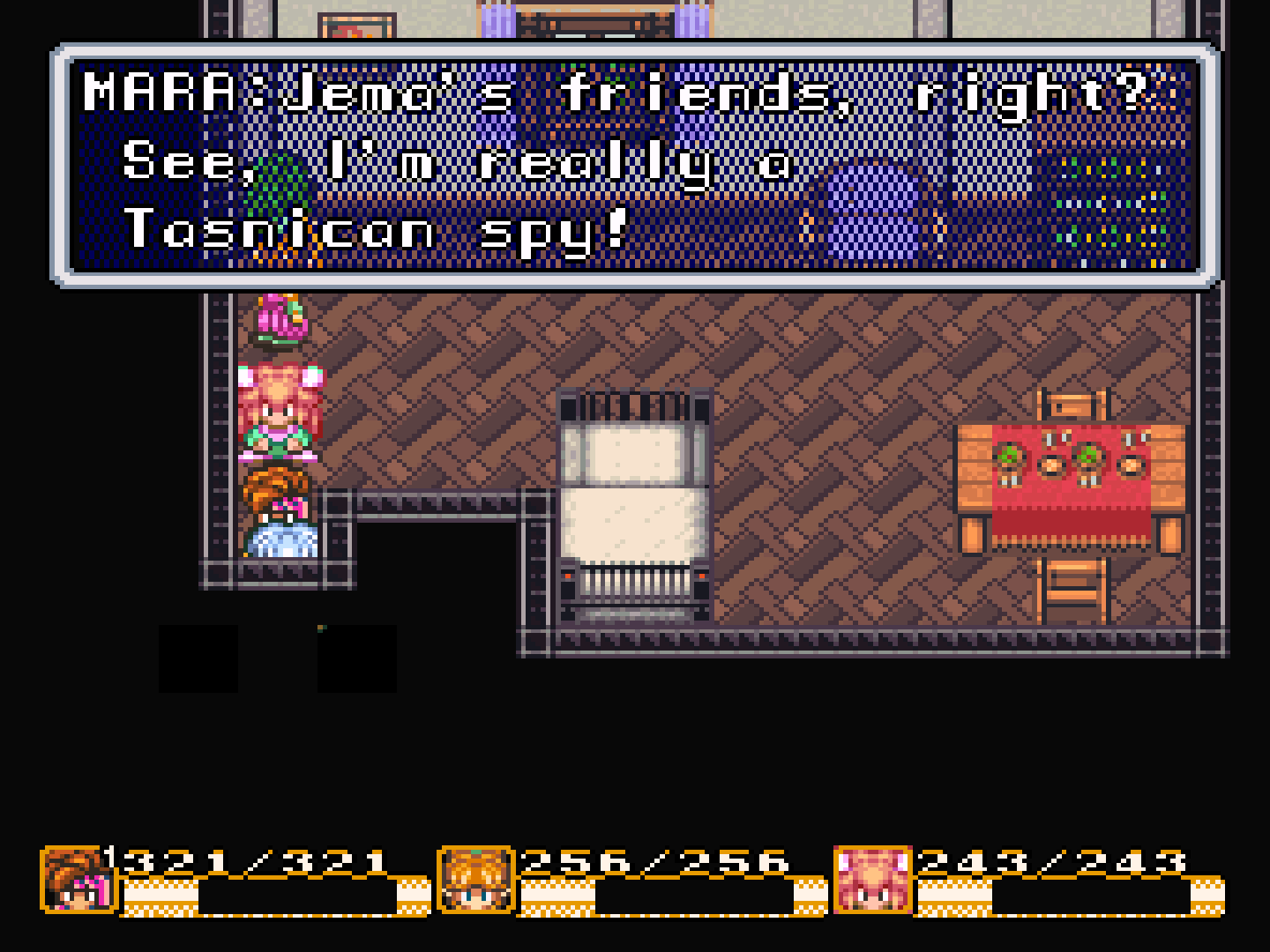 Mara: "So was my husband till he got...caught. I'm continuing his work. Enter Northtown from the Resistance's sewer-way, east of here. Give the guard this secret number: '634.'"

We talk to the guy with the headband before the gate to the sewer...

He tells us to "try the secret number!"

We give the number to him. 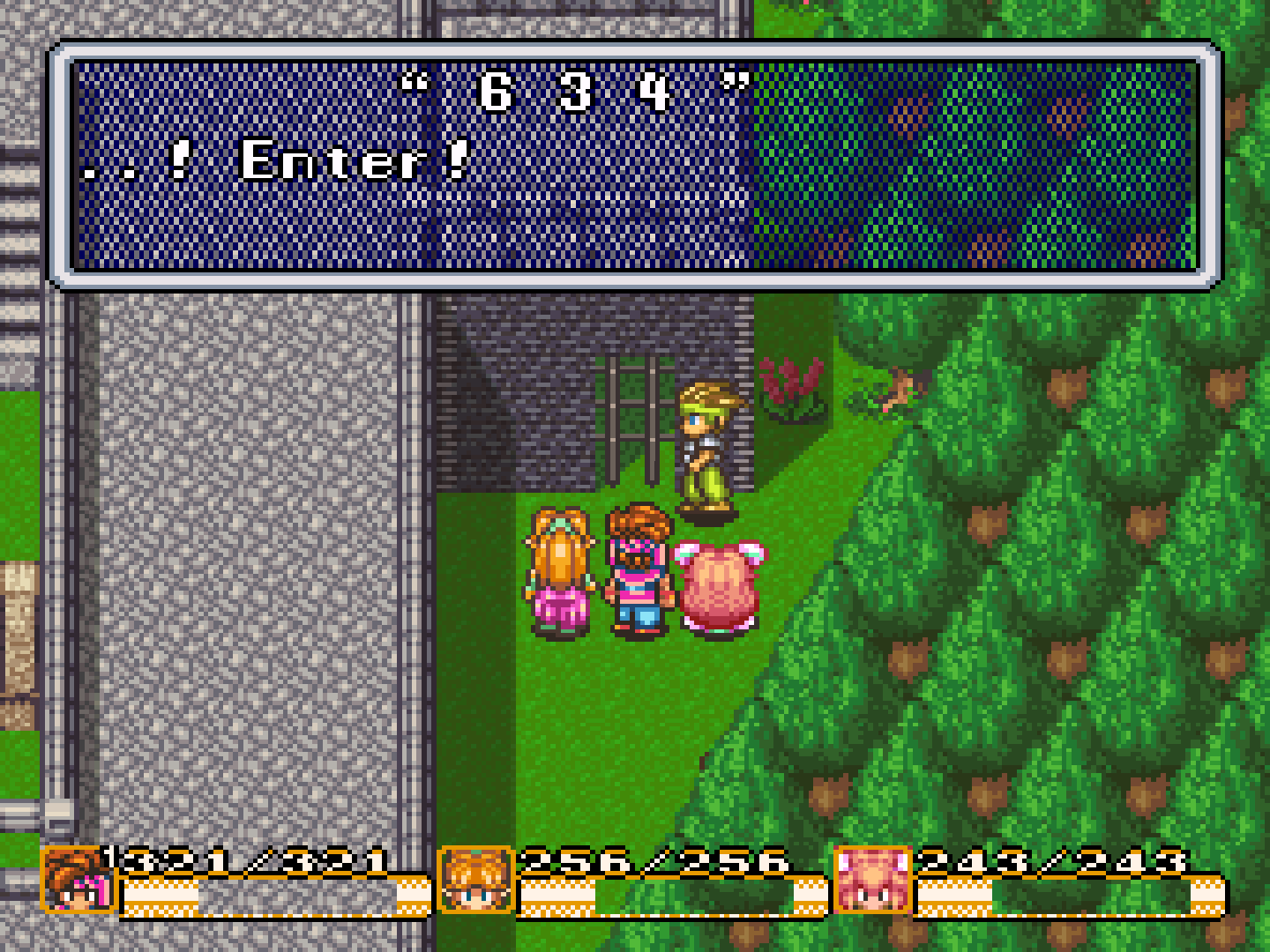 Inside the sewers now, where Iffish swim about! 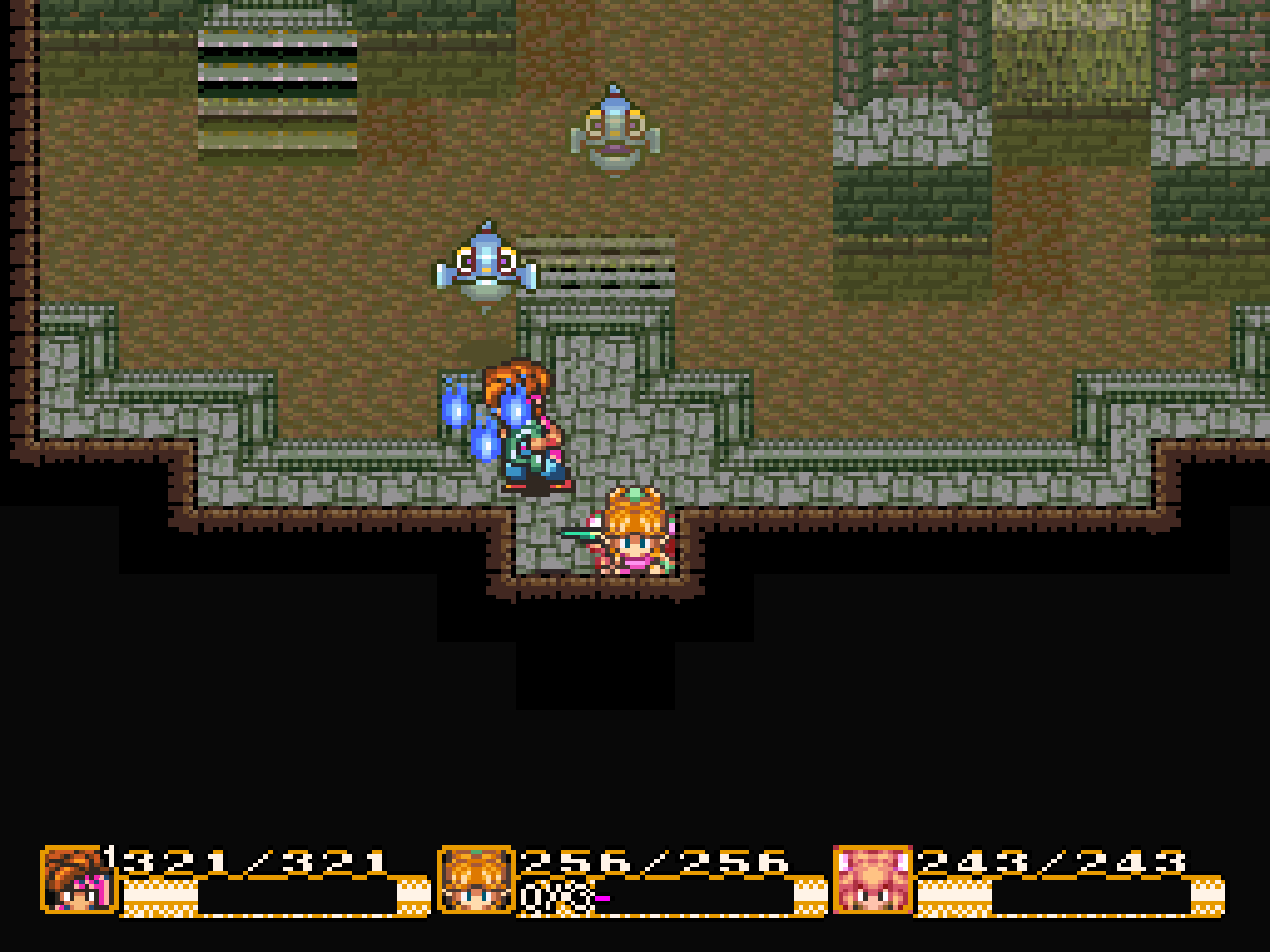 It seems there's a new Iffishial breed of fish swimming about: a Dinofish!

That Dinofish can shoot missiles!

And a Blue Drop, which splits into newer copies of itself to give us more trouble!

Outnumbered, we retreat downstairs, deeper into the sewers!

More monsters corner us, but we beat them back easy!

I have Pidge join in with her fire magic!

I have Hero and Max switch weapons to fight back the Blue Drops...

Analyzing the Dinofish, they're weak against fire magic! I have Pidge oblige with a Fire Bouquet!

We climb a staircase up...

After a long tussle, we head to the next staircase going up, where we're greeted by a group of rebels! 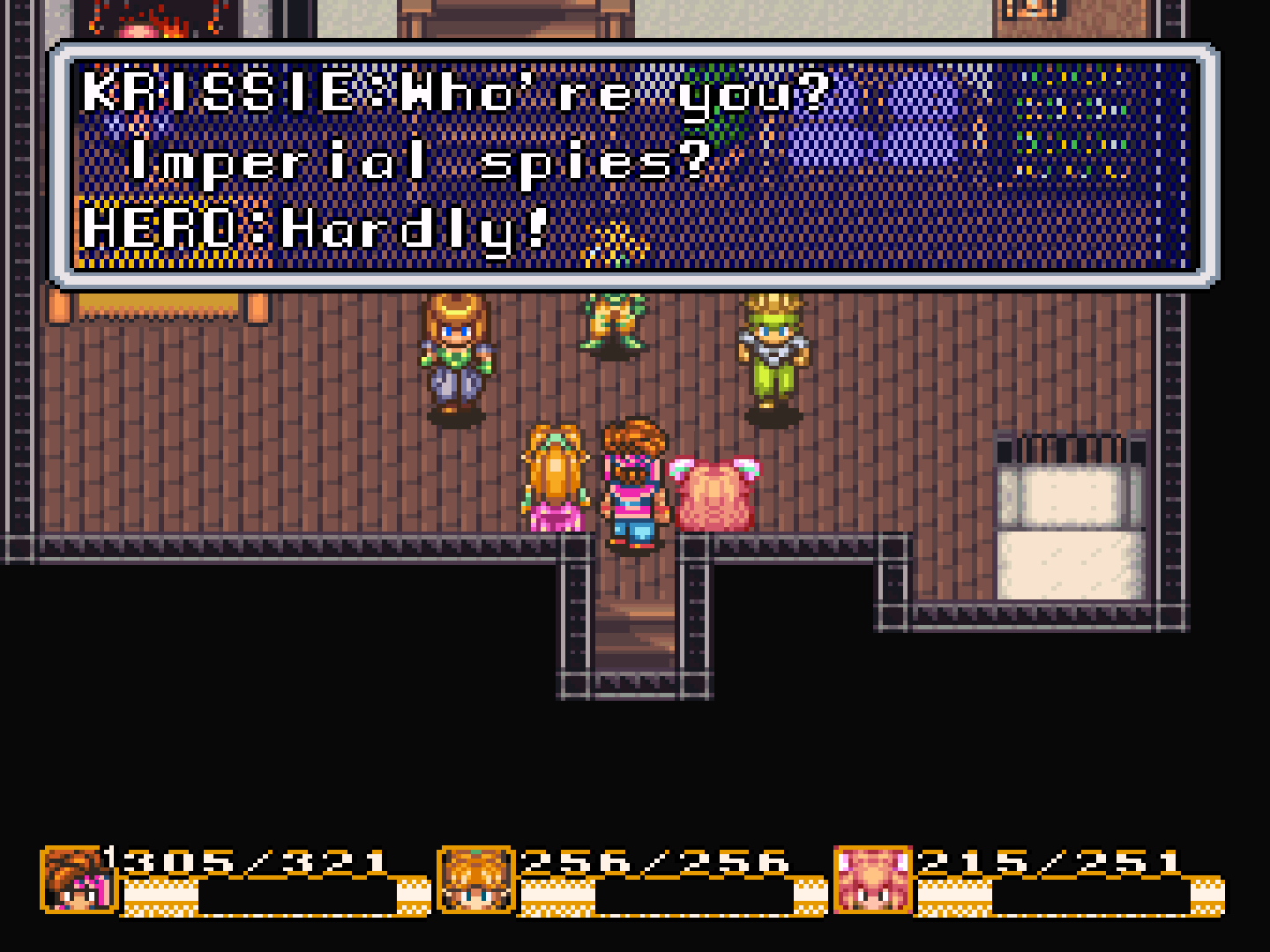 But she changes her tune after realizing the trio. Jema's spread word about us so quickly... 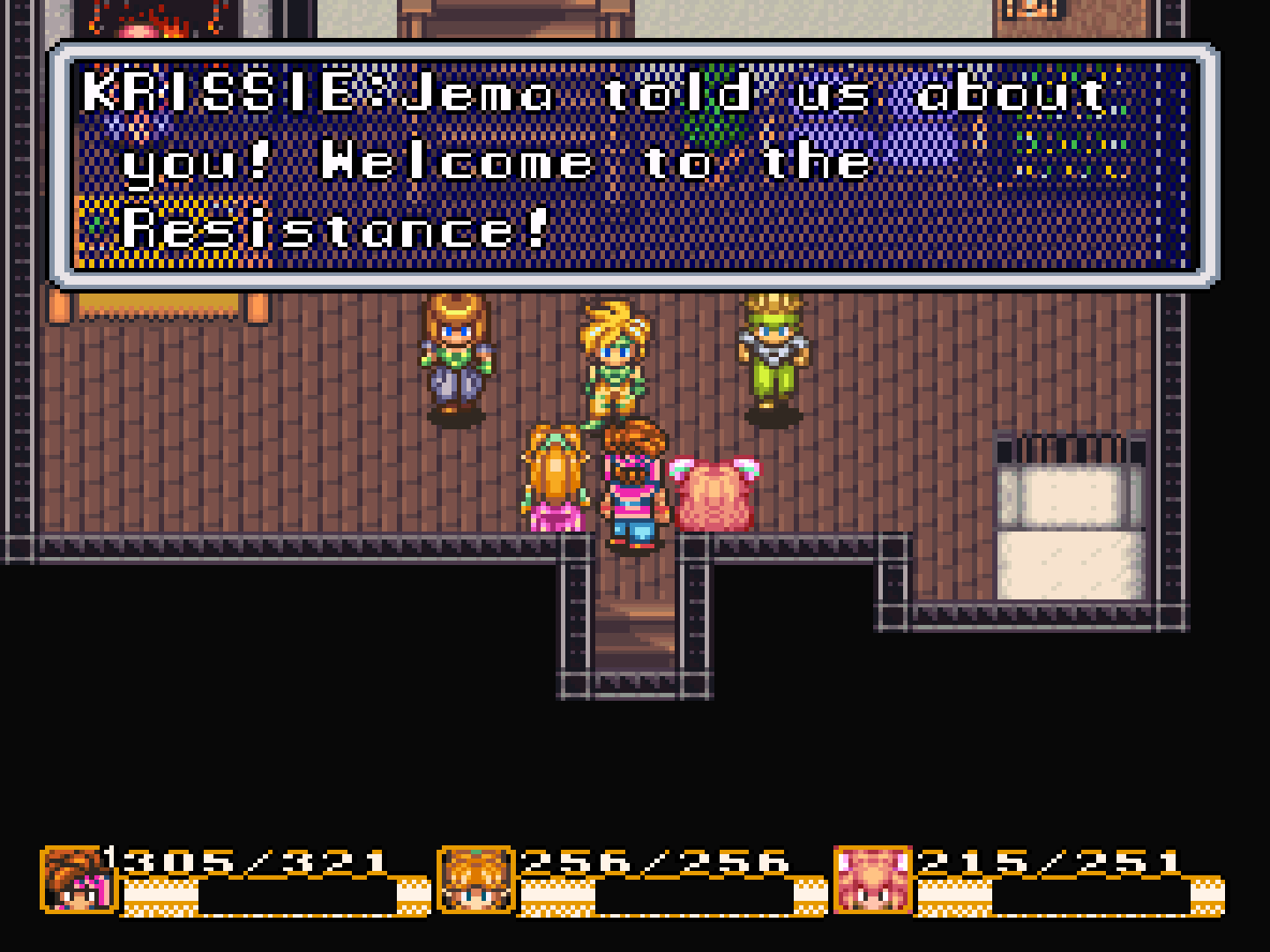 Hero nods and introduces himself.

Pidge is surprised and awed that the Resistance is led by a woman. She crosses her arms, looking away. She's in love with Krissie, or Hero, I'm guessing... 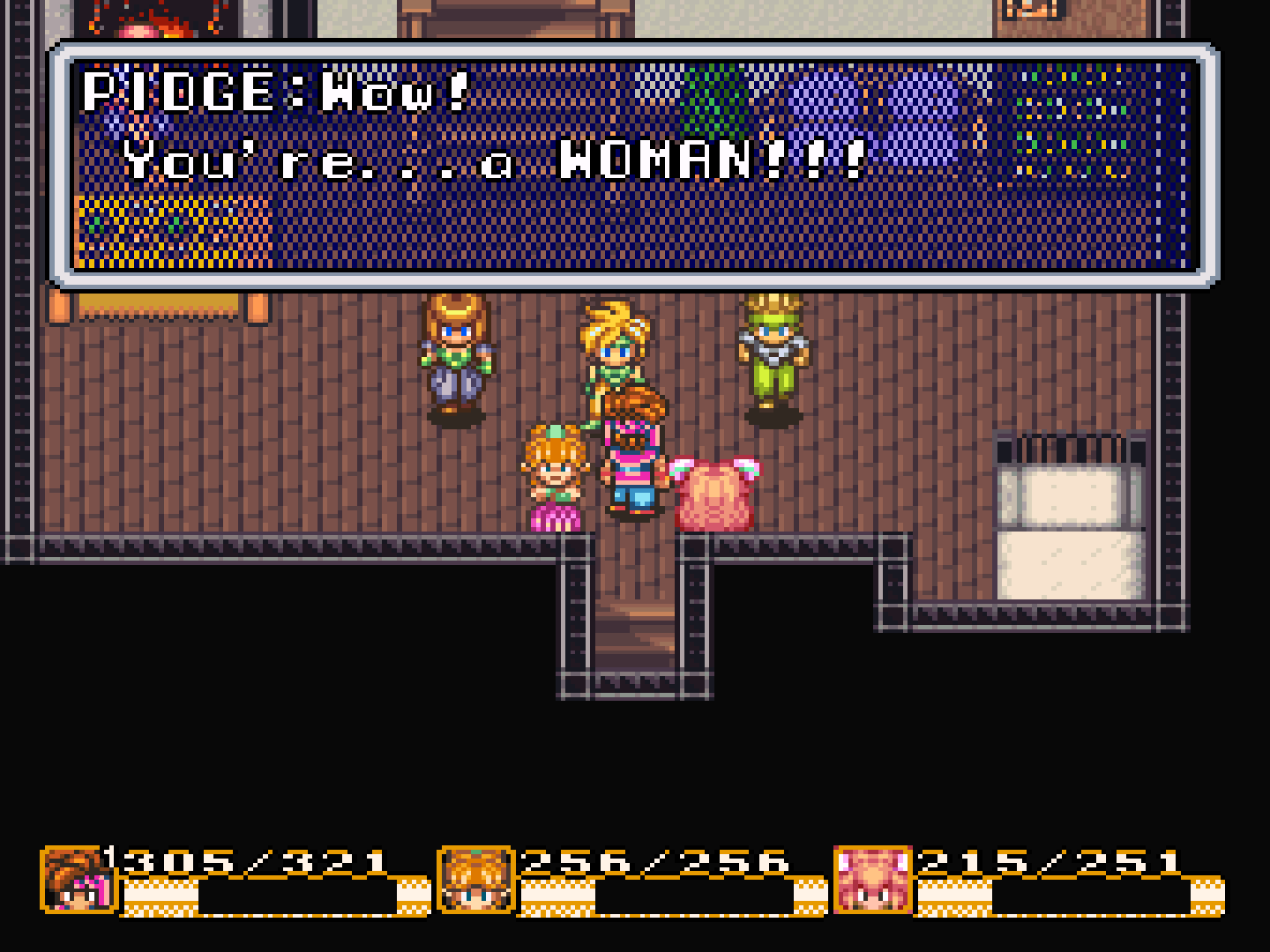 She tells us more news about Dyluck's whereabouts. He's up to no good. It's probably Thanatos who has him under his control... 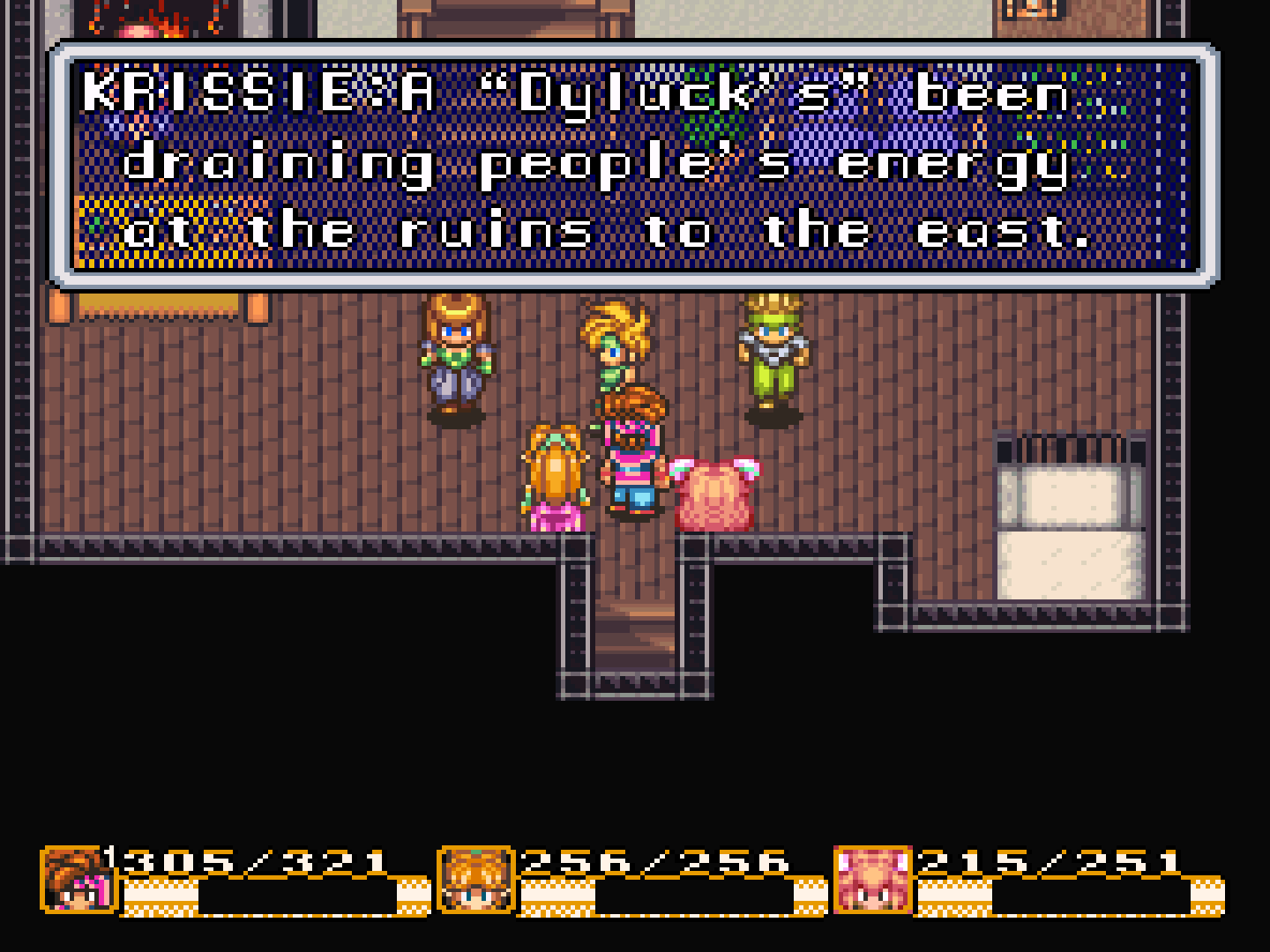 Pidge: "Like in Pandora! But why's Dyluck..."
Krissie: "Something must be controlling him. We'll check on that."

A Resistance man tells us that Krissie's father was the founder of this secret anti-Imperial group. So Krissie's been the rock of the Resistance, so to speak. And she's only 18...

We speak to the elderly man near the fireplace.

He tells us the trouble of the Empire started 15 years ago...

We head upstairs, where we talk to more people.

A mustached Resistance member tells us about the Emperor's very tough "bodyguards." He lists them: Sheex, Geshtar, Fanha, and Thanatos. So far, we've met two of these four Imperial "bodyguards."

A boy downstairs tells us he heard Krissie crying in her sleep. It's hard being the leader...

We're now in Northtown! What a bustling city!

Eventually we find the inn, and downstairs at the dining area, we see Watts! 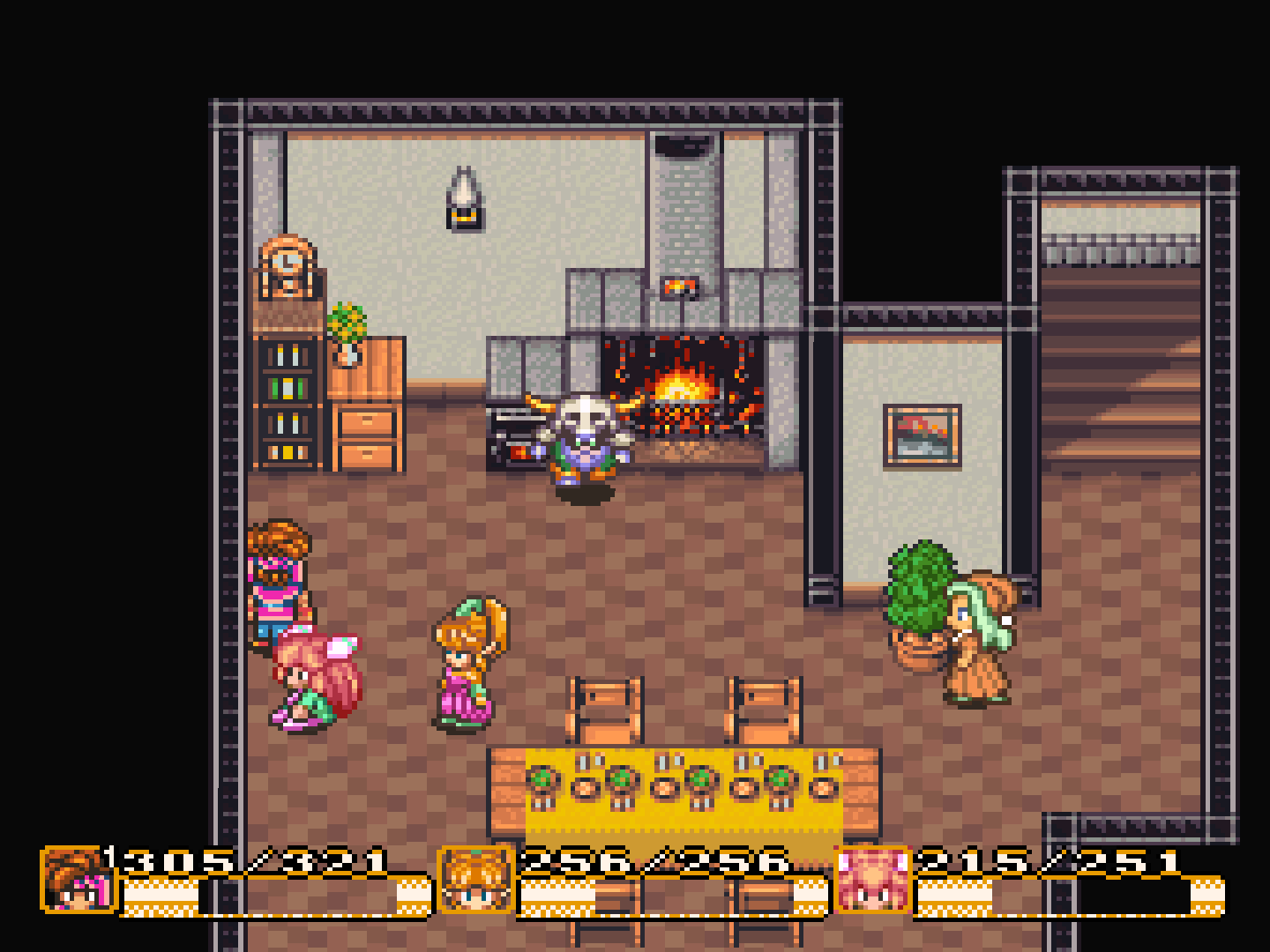 But I head back up and rest and save here.

The inns in Southtown and Northtown are pretty pricey, 100 and 120 a night respectively! 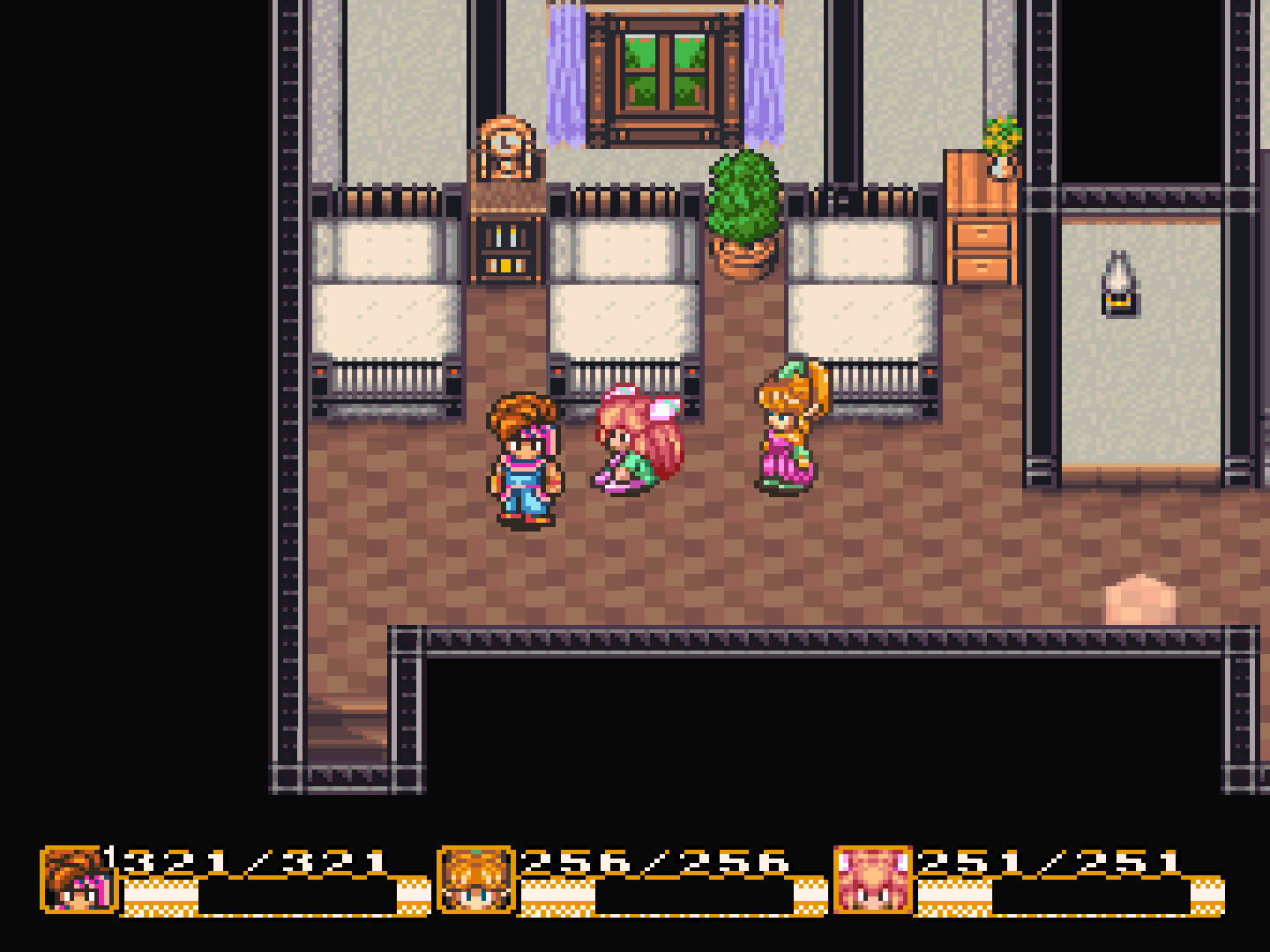