Still enjoying the music of this icy forest as I'm typing this down...

Now let's get back to that castle!

I unlock the bridge in the east corridor this time, curious to where that passage goes... 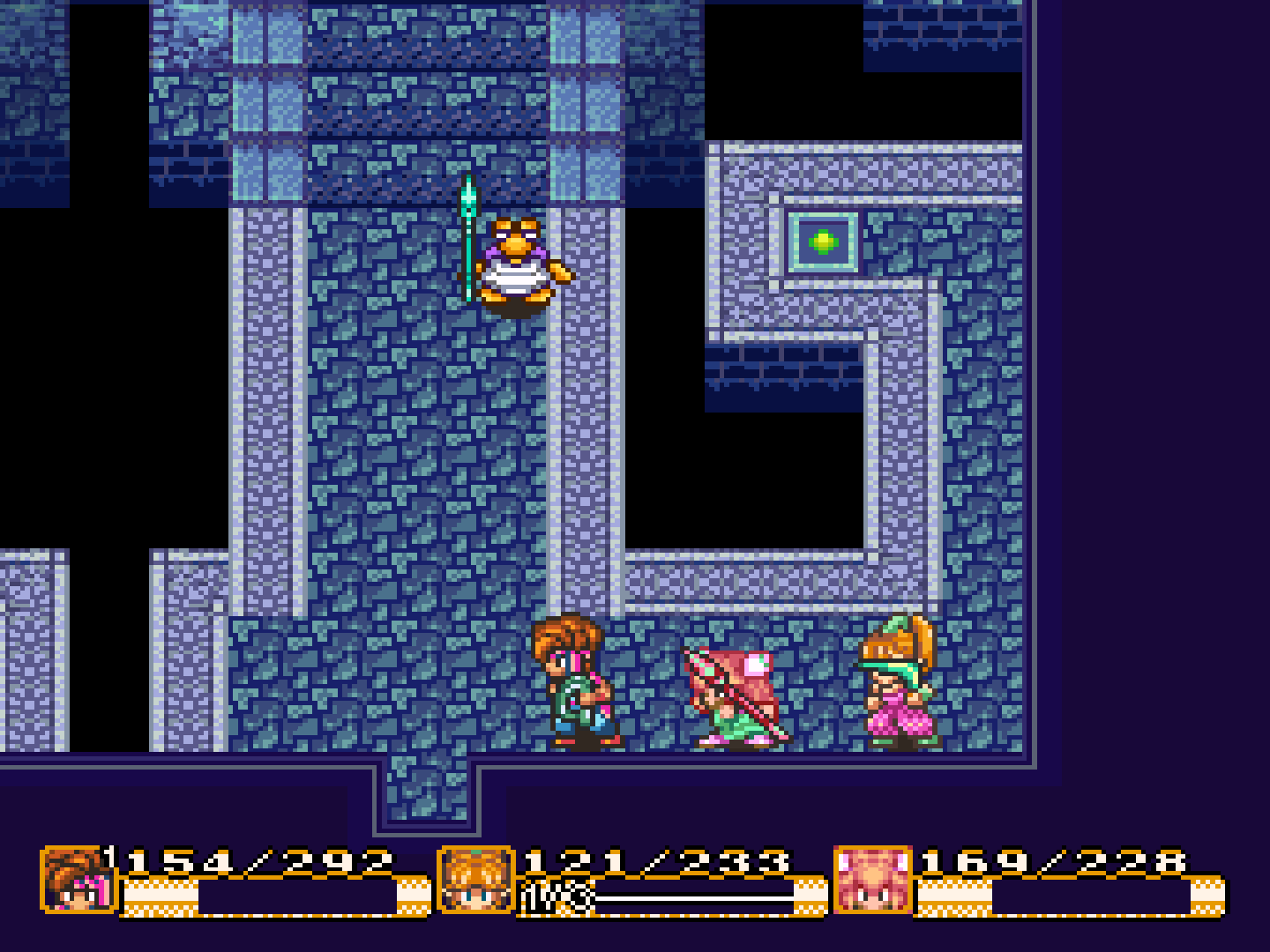 It leads into a room with two Specters and a chest.

While Max Fireballs them into ghostly pancakes, I open the chest... 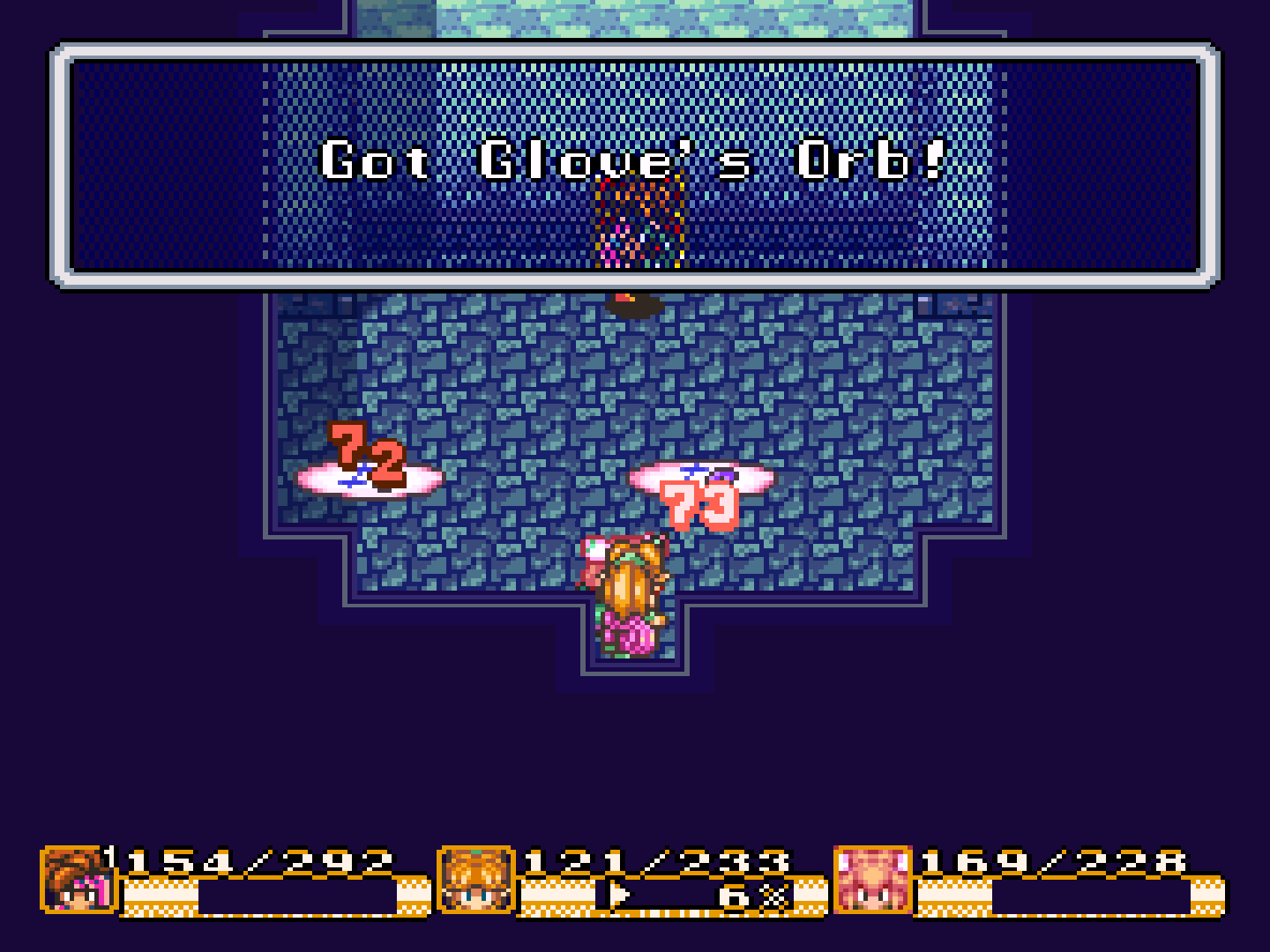 Now we head to the west door, and up to the hall with the bookshelves...

In the hall, a Specter absorbs health from Max!

I have him counter with Max by taking not only the Specter's health but his other Specter buddy's! Take that!

We're now in the library again, where we face more Mystic Books!

I press on the right switchpad before the tunnel. Nothing...I sigh in relief.

Now we're before a set of stairs. 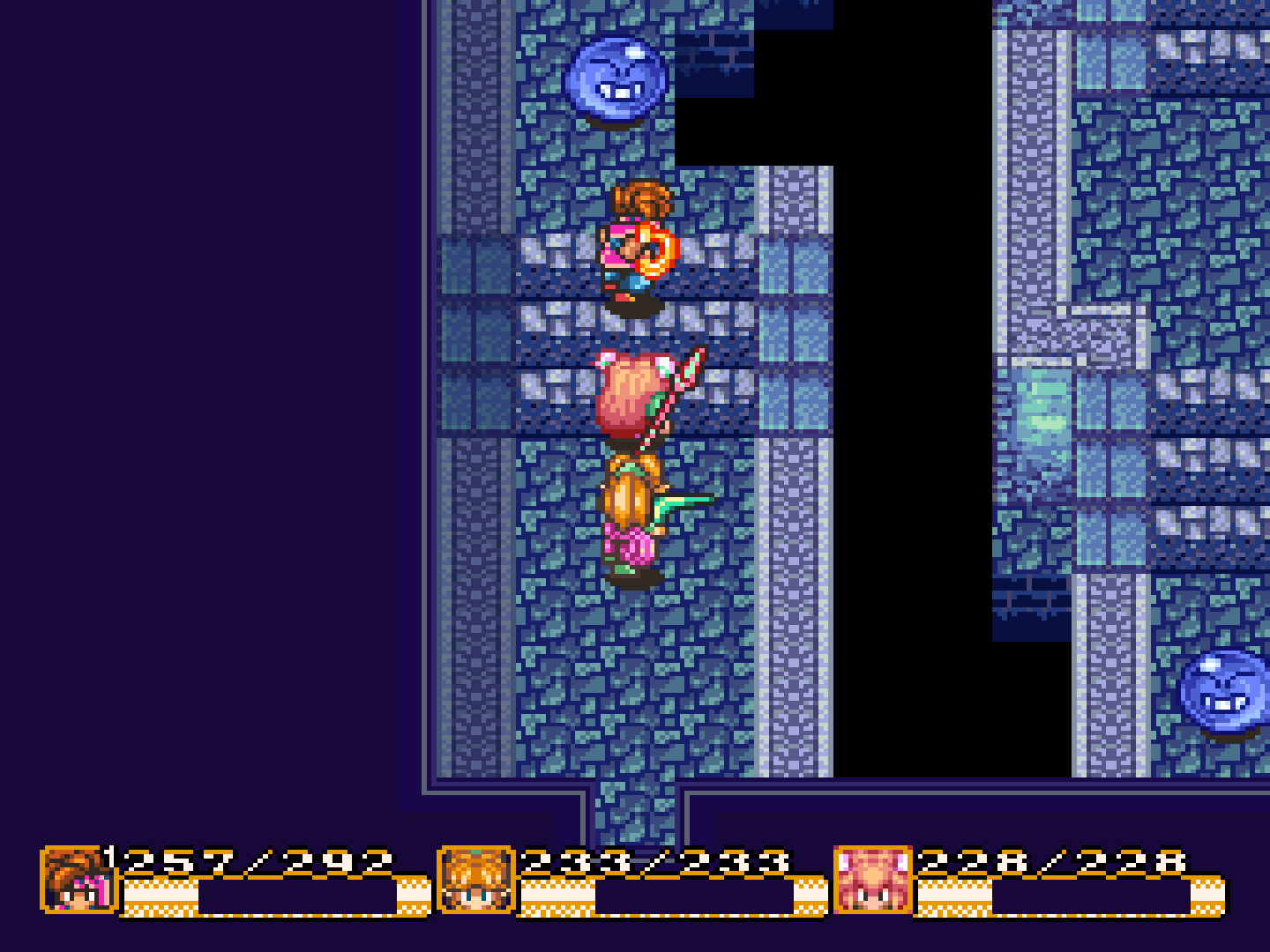 After taking care of the Blue Drop, we proceed to where we find more posts to cross over. 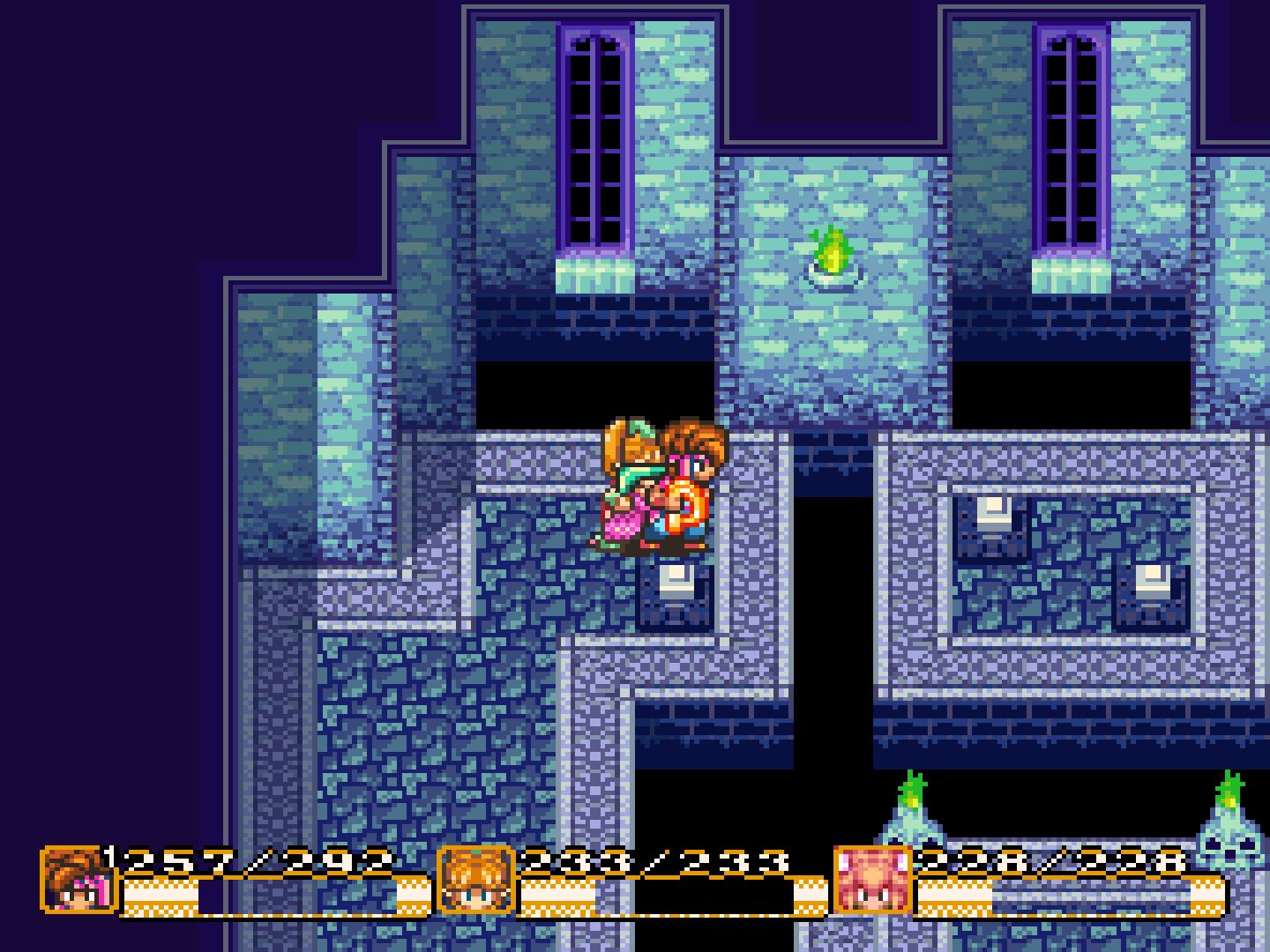 We leap over to another ledge, where we find an LA Funk! The Fireball's super effective on the angry cloud!

Now at the last wave of enemies before getting to the center...Max is out of magic so I use up another Walnut!

The last wave's here's a bit hard to take care of!

After expending so much fire magic on the ever-dividing Blue Drops, we proceed.

At the top of the stairs is another portal... 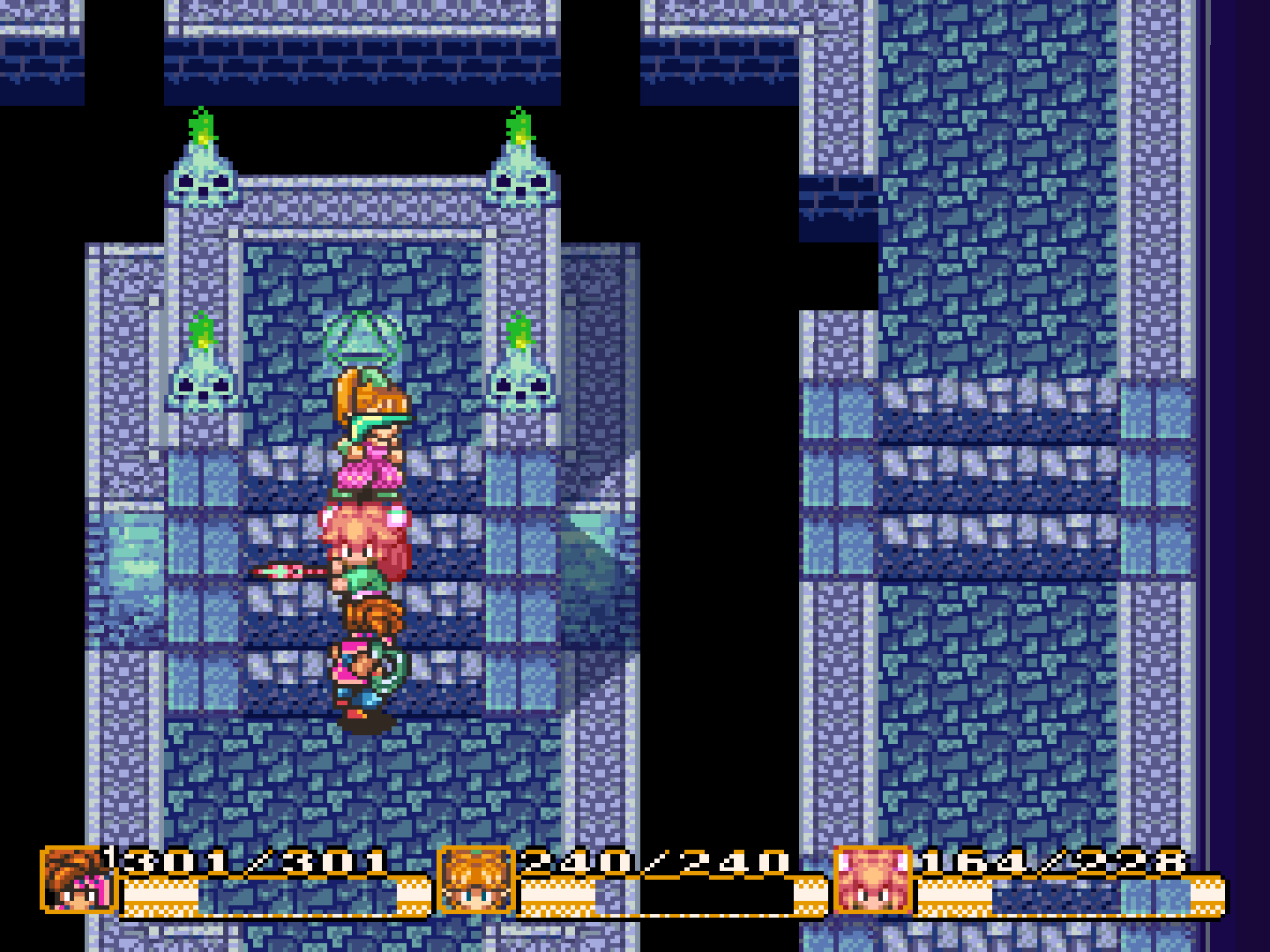 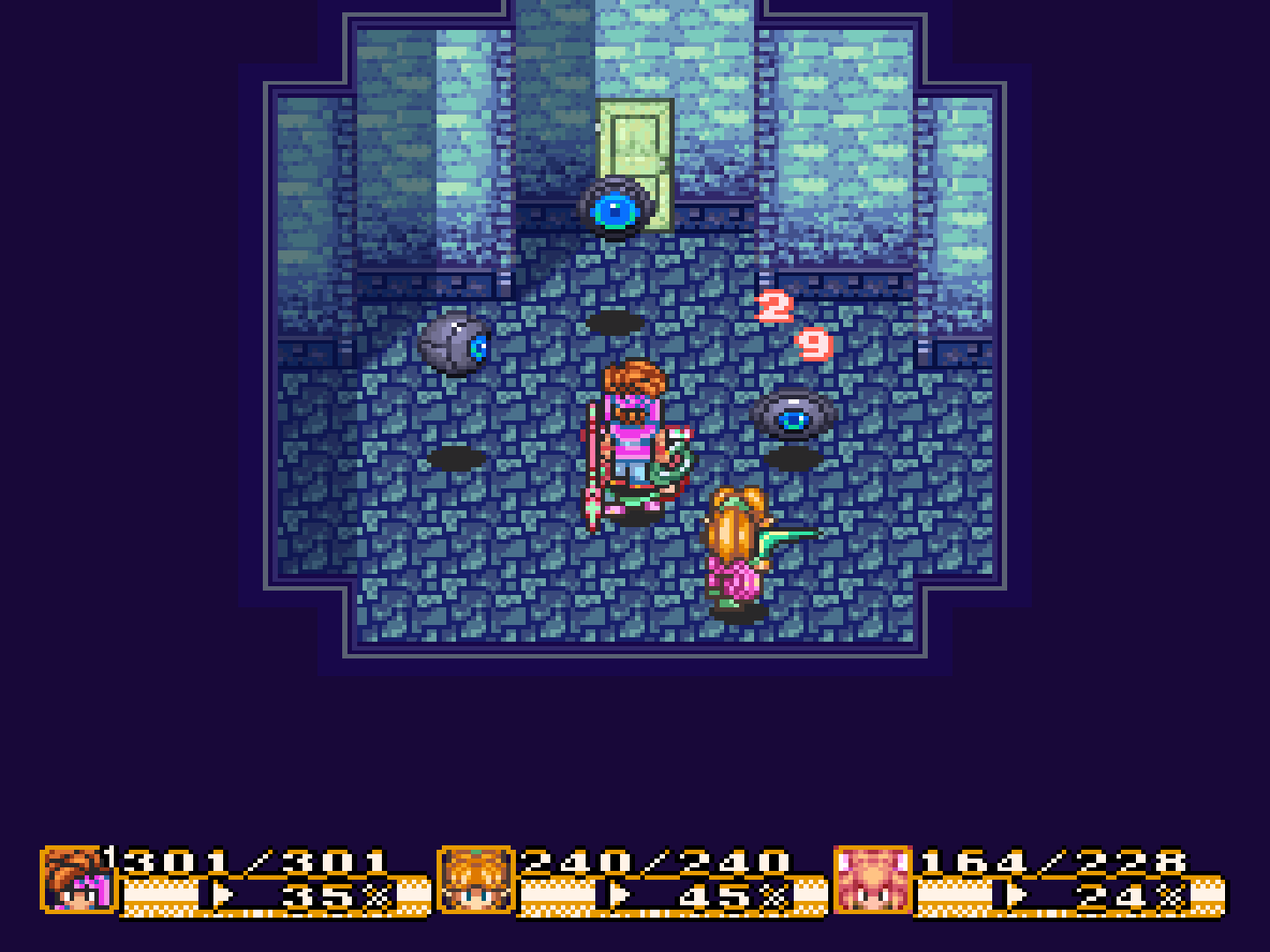 ...and we're surrounded by more of those eyes again!

We head into the door...

We now come to a wide, long throne room!

A voice is heard: 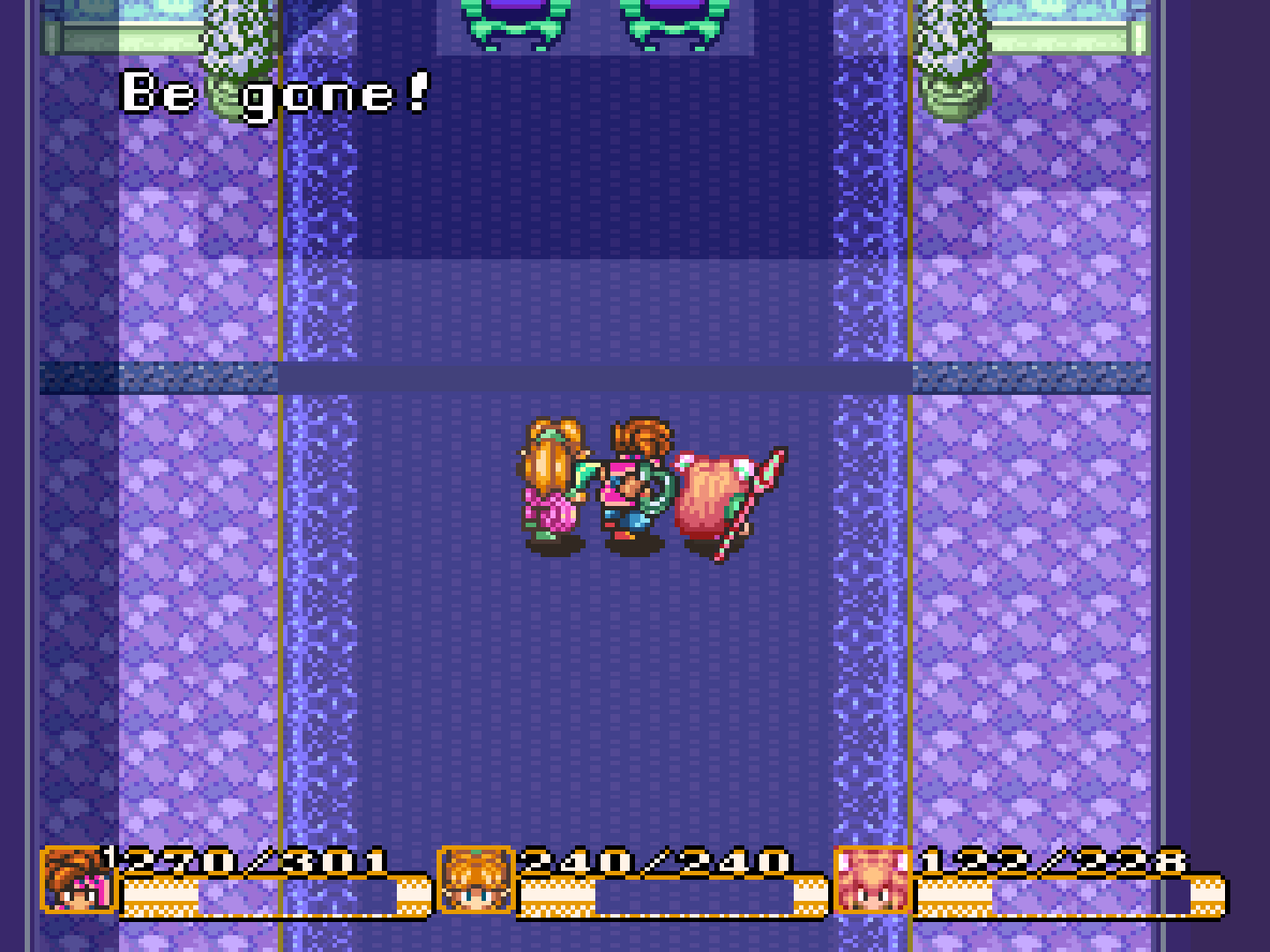 I now have a decision to make. Should I leave or not?

I decide to hold our ground, knowing there's a boss fight coming... 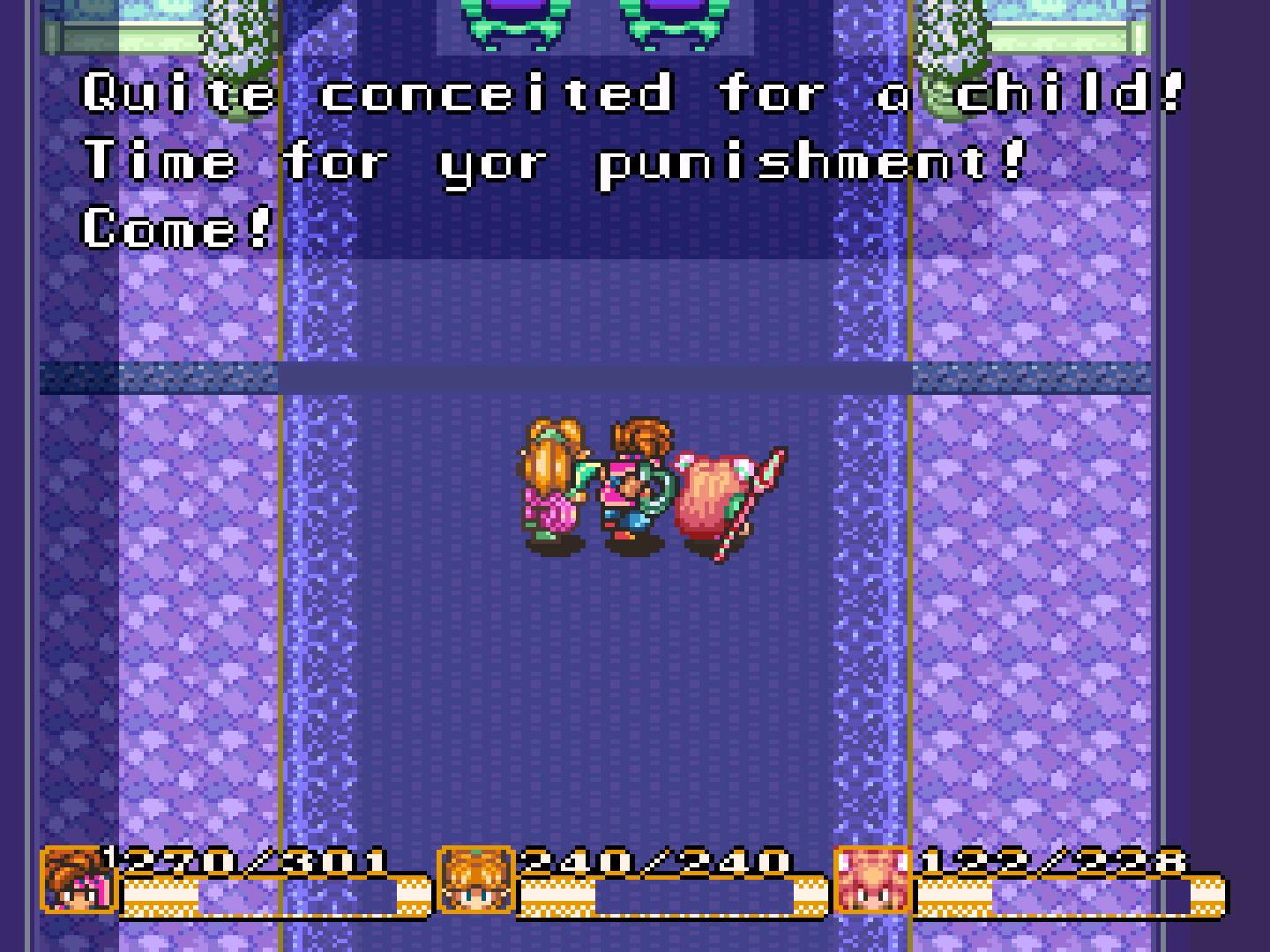 Here we go! Adultist scum, prepare to get punished by us!

The boss is an Ice Gigas! 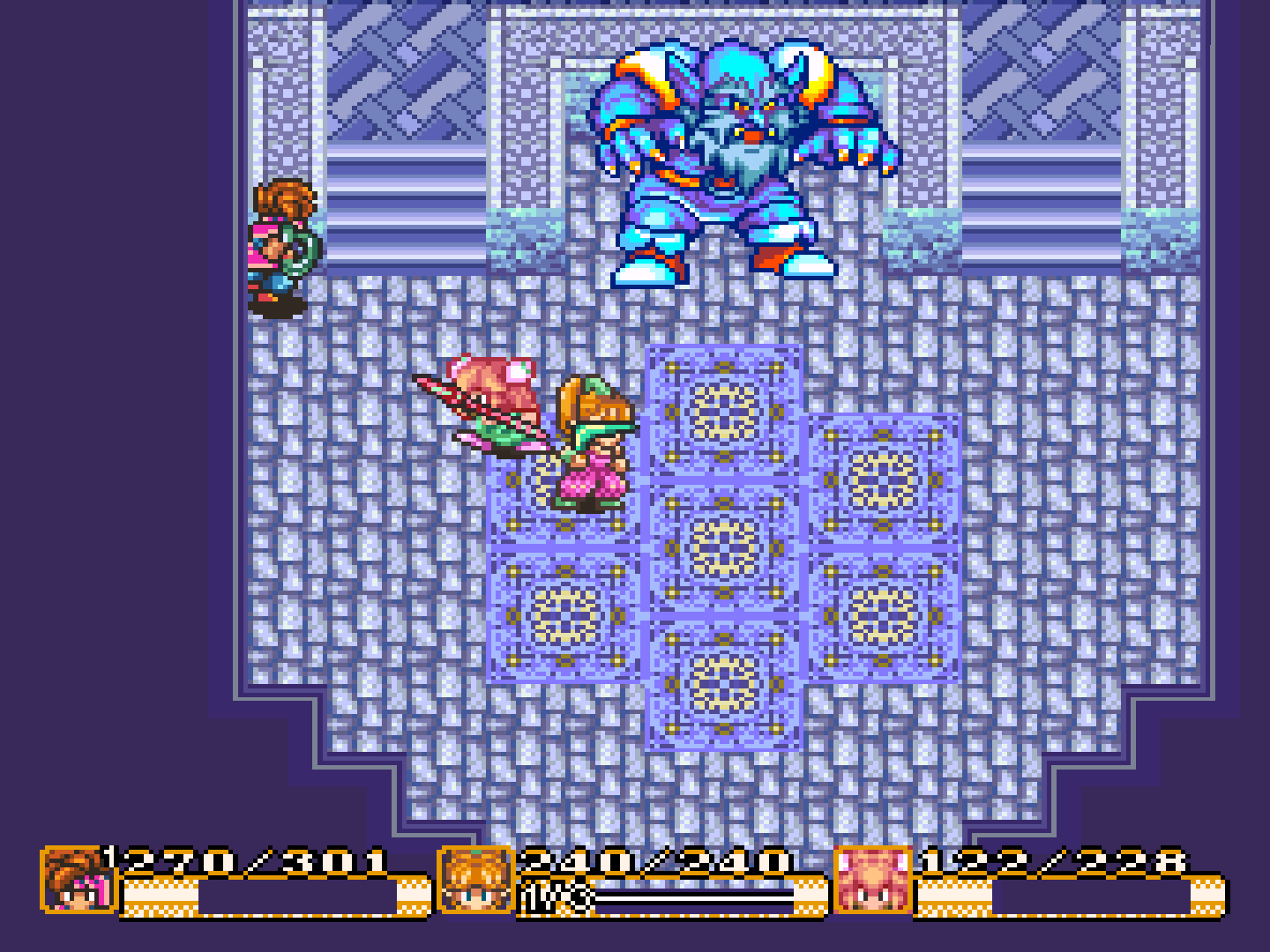 I heal Max's magic and equip the Claymore.

The Ice Gigas inhales and lets out a Freezing Breath! I try to have Max cast a Lava Wave, but too late! Pidge is turned into a snowwoman! 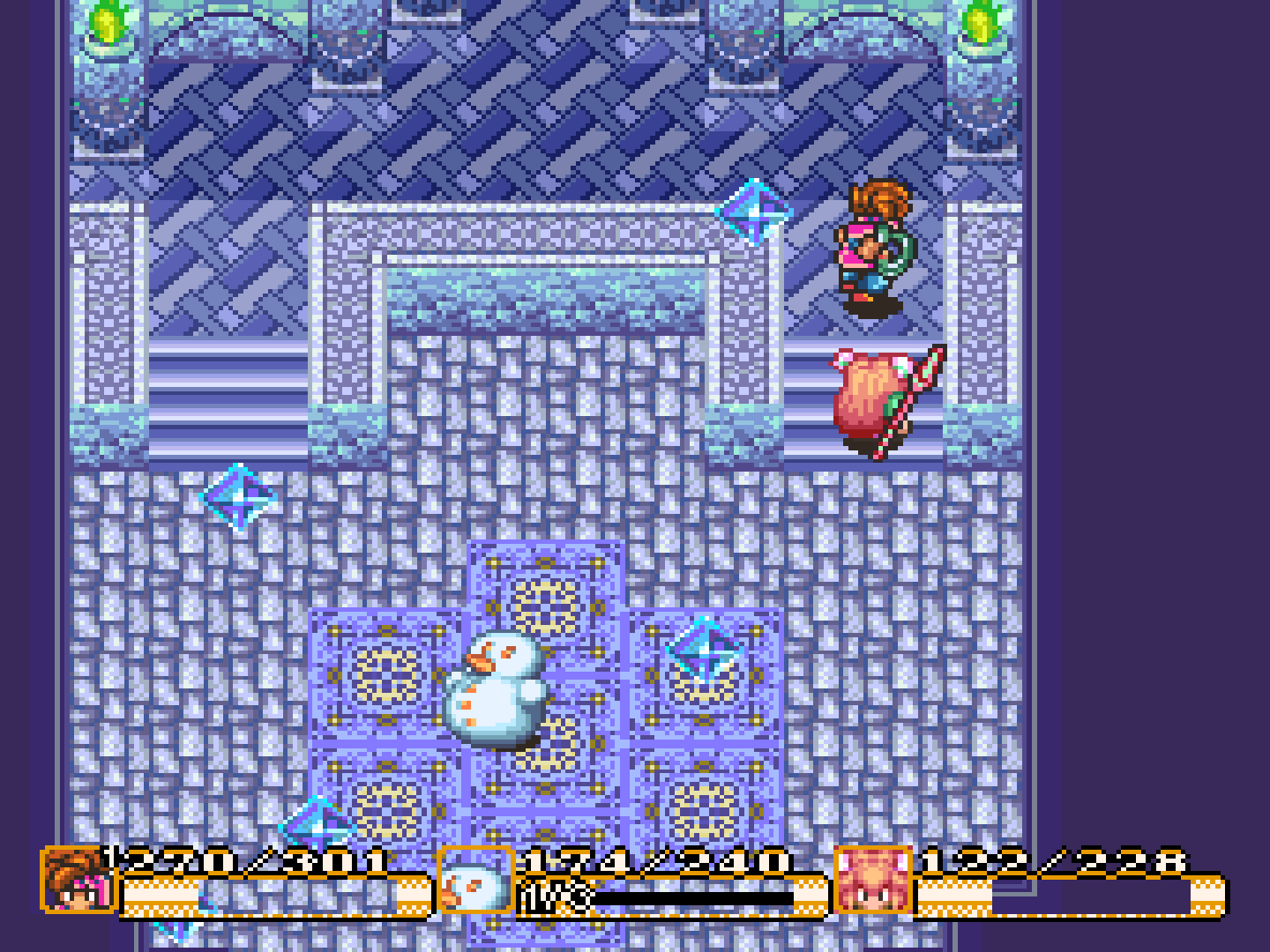 Where are you going to appear next?

While targeting him, I realize that I'm facing a Frost Gigas, not an Ice Gigas.

He throws an Acid Storm on us!

But Max gets him with a Lava Wave!

In the next round of spells, he imbues Ice Magic on us, to make our weapons less effective against him!

Another vanishing moment for him, as I use up the last of Pidge's magic to heal us!

As I have Max cast his spells, so does he! But I can't stop him from casting...

An Exploder and Lava Wave spell later, and he goes down! 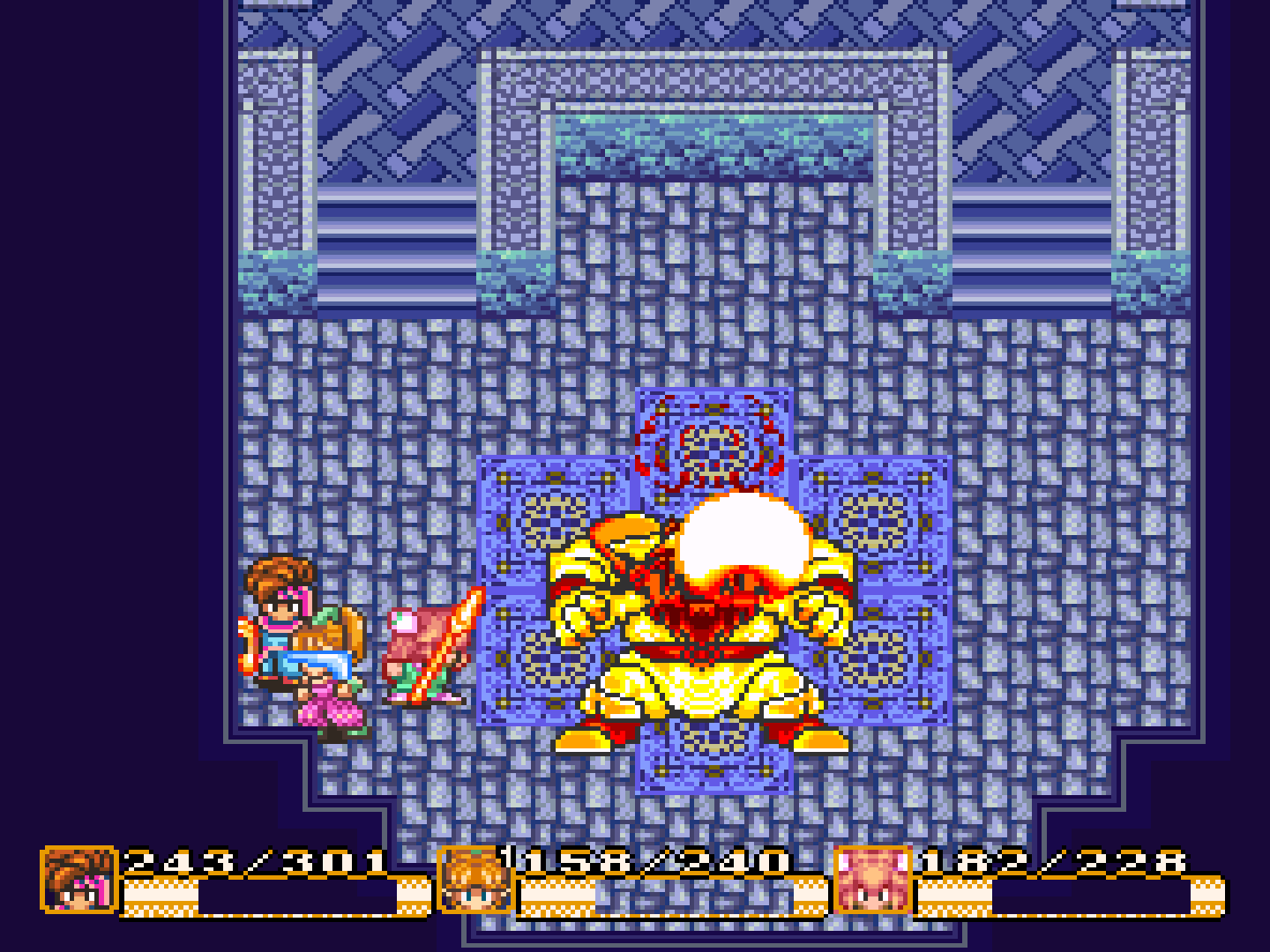 We get a Boomerang's Orb!

We head back to the throne, jubilant music playing. 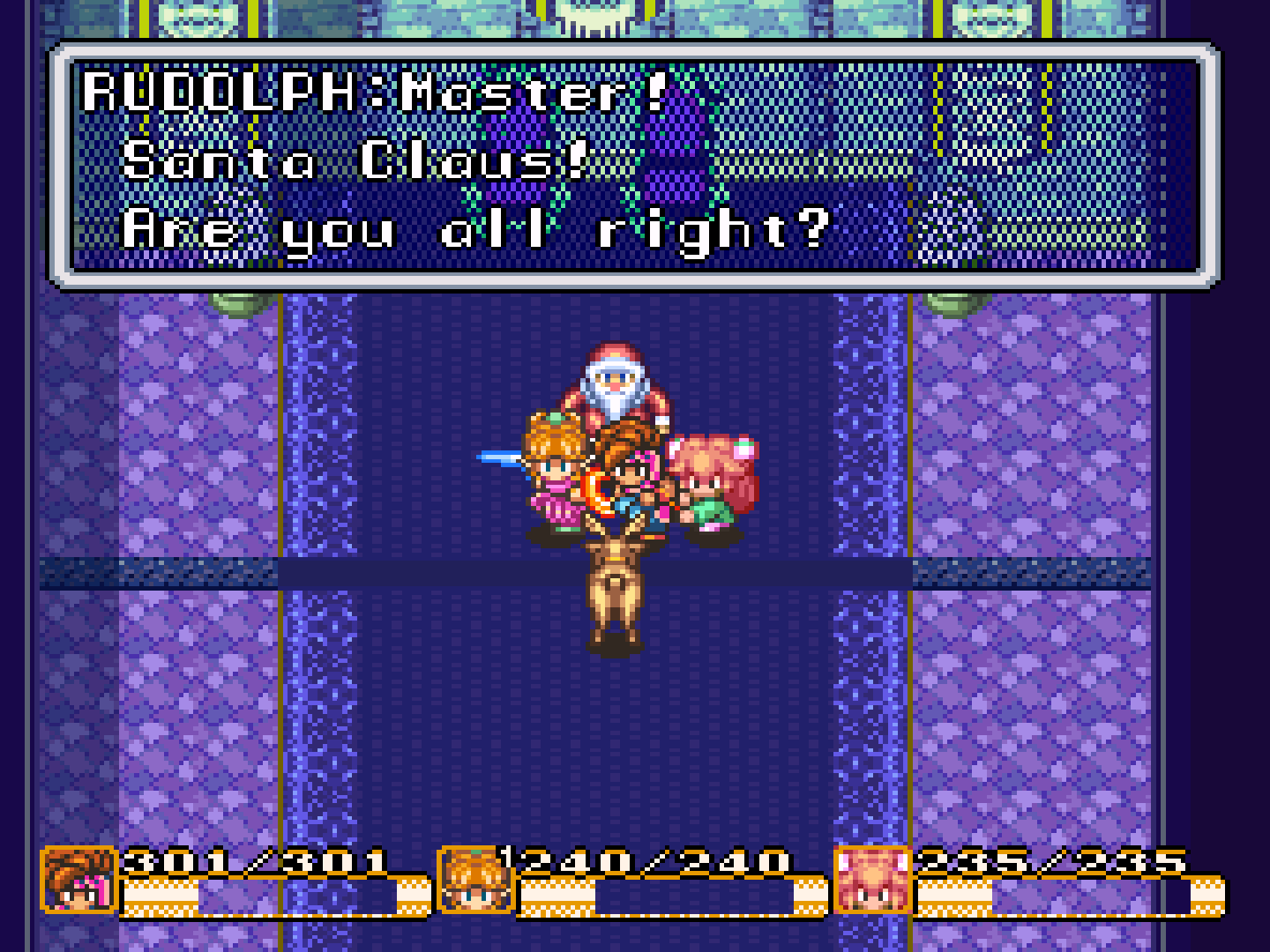 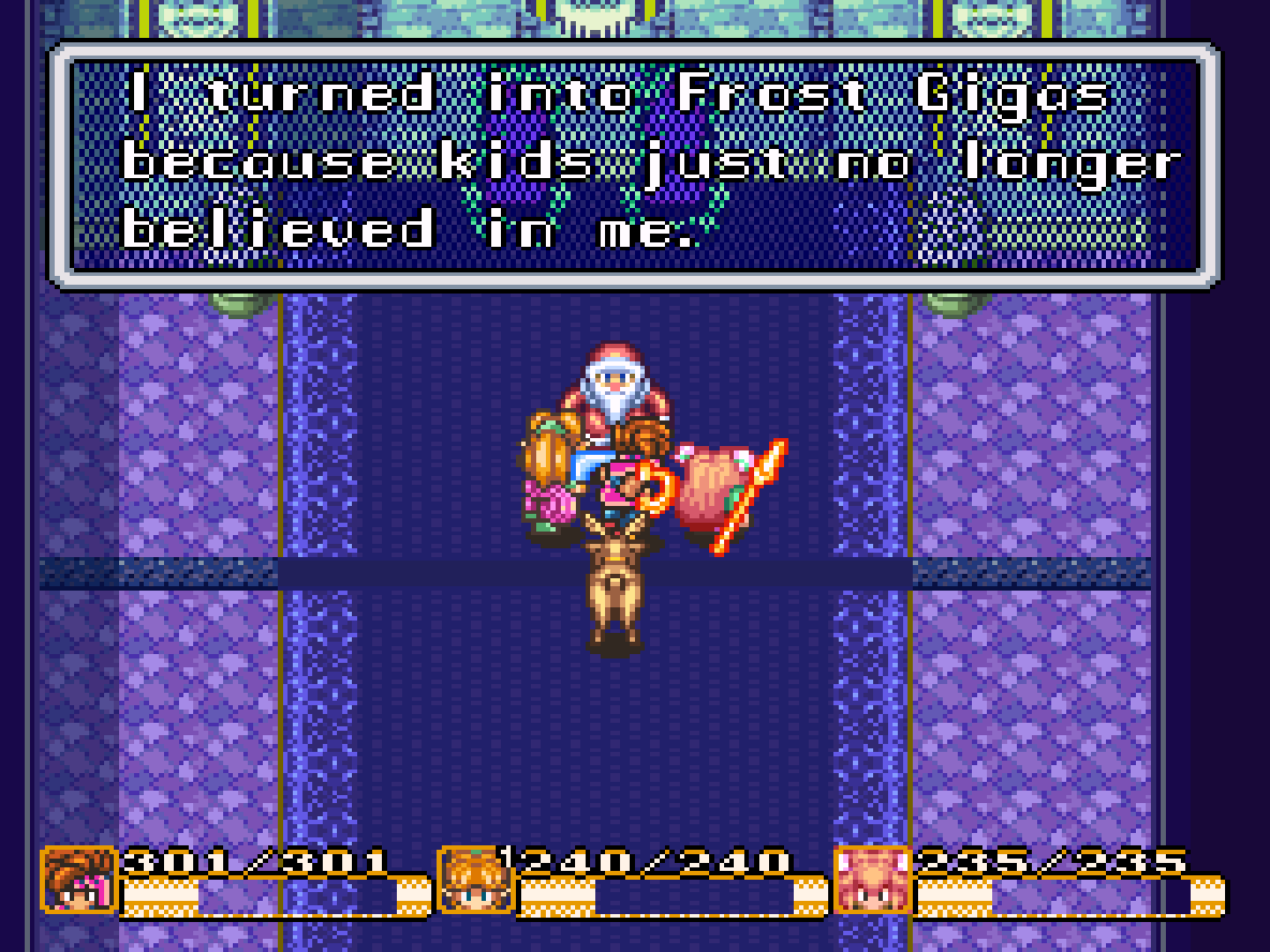 Santa: "I turned into Frost Gigas because kids no longer believe in me. When Mana fades, kids lose their hopes and dreams. I wanted so badly to bring back all of their dreams...Then I heard that Mana Trees grow instantly, and become huge! I set off to find a Mana Seed, thinking that I could grow a huge Christmas tree!" 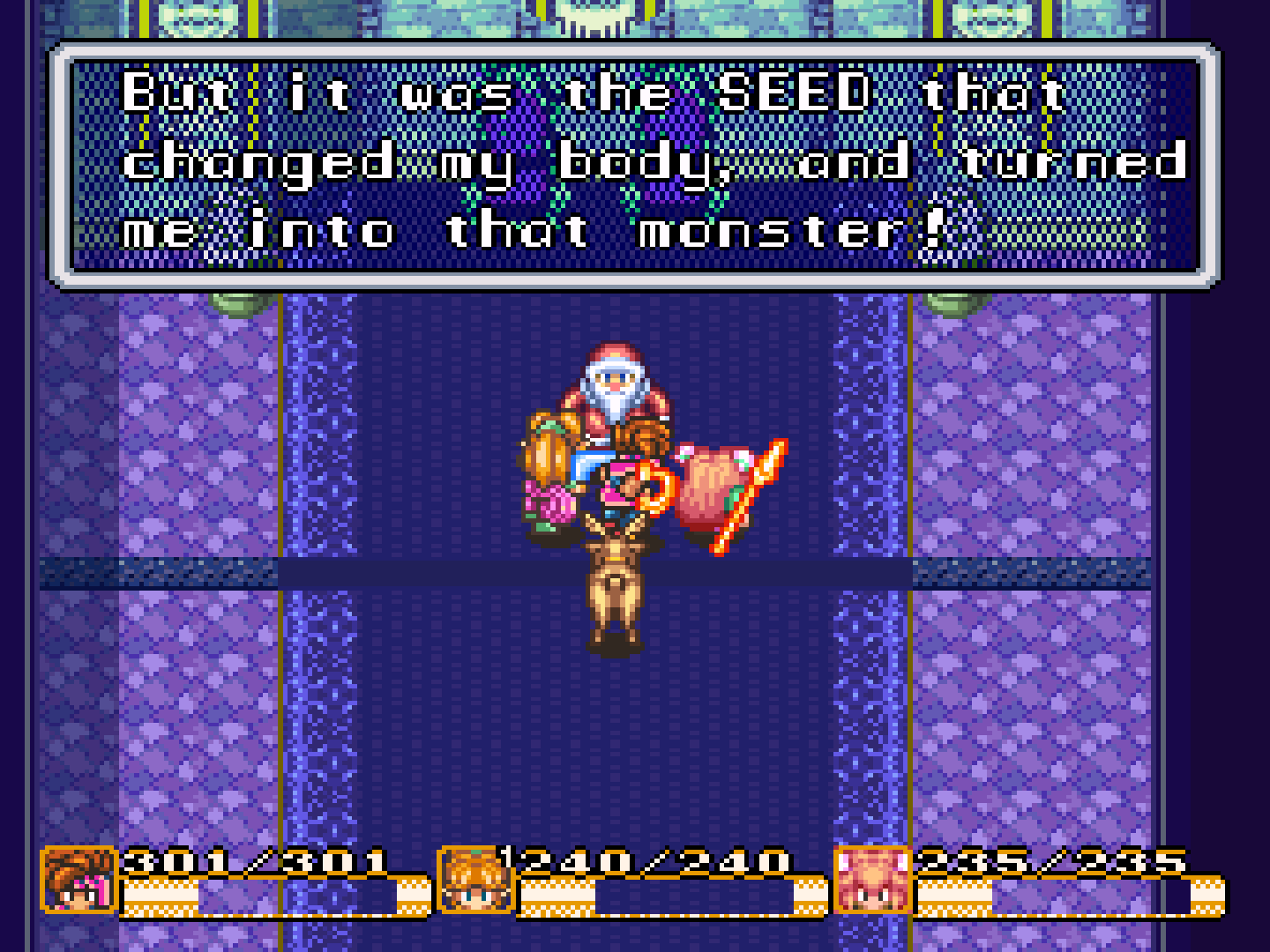 Santa: "If the power of Mana is abused, it can be very dangerous! Here, take the Fire Seed. You need it, right?"

So Santa was the "odd old man" that the Scorpion Army guy was talking about!

We got the Fire Seed!!

While heading back to save at Neko's, I find out the benefits of a fire-imbued weapon from the enemies I face on the way there.

I heal everyone before saving.

Honestly, I did not expect that I would be fighting an angry, transformed Santa Claus...