Into the dragon caves we go! 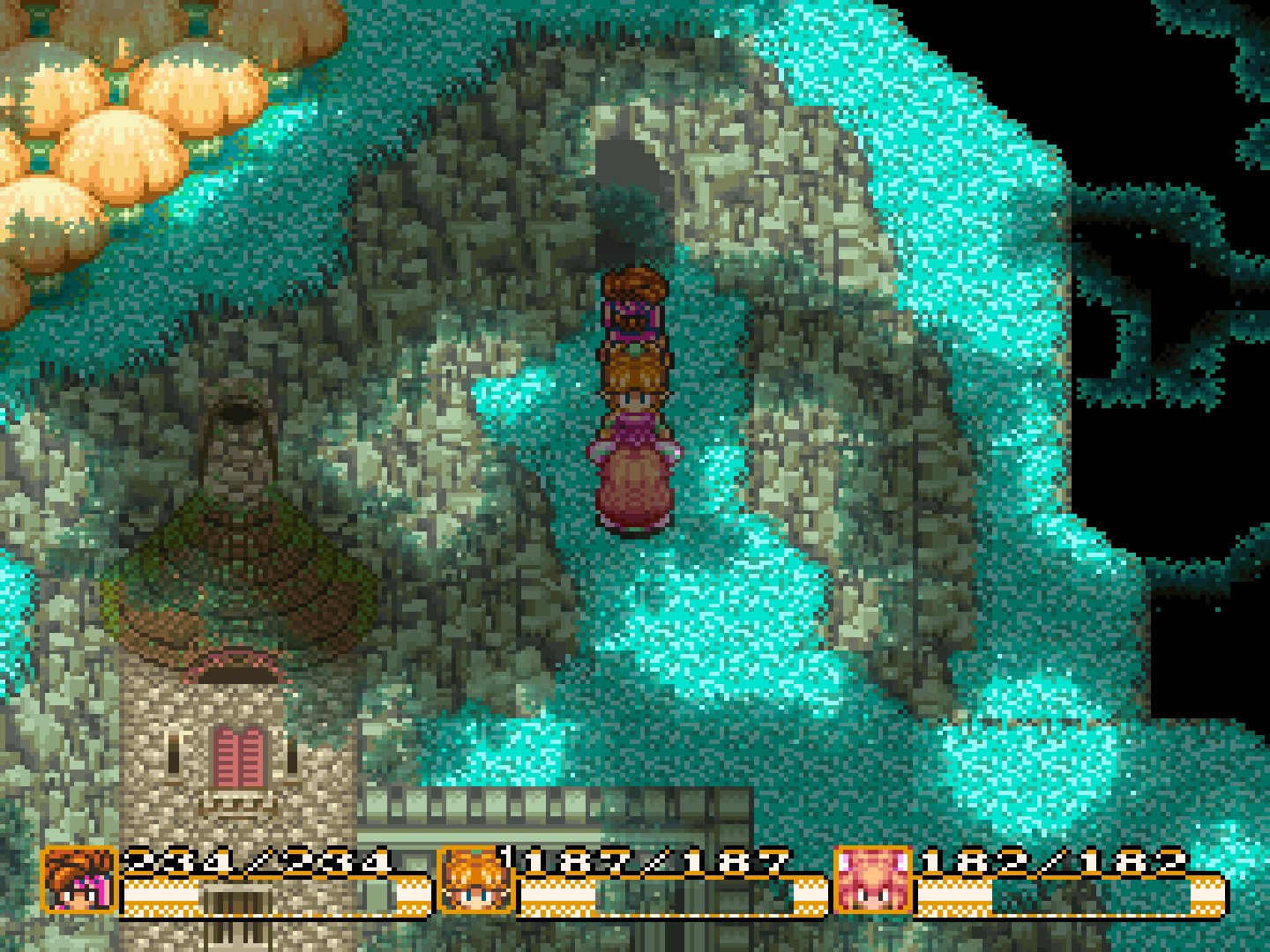 But first, I have to cross a mushroom maze filled with enemies before getting inside the cave proper!

I switch Hero's weapon to a Power Glove and continue on... 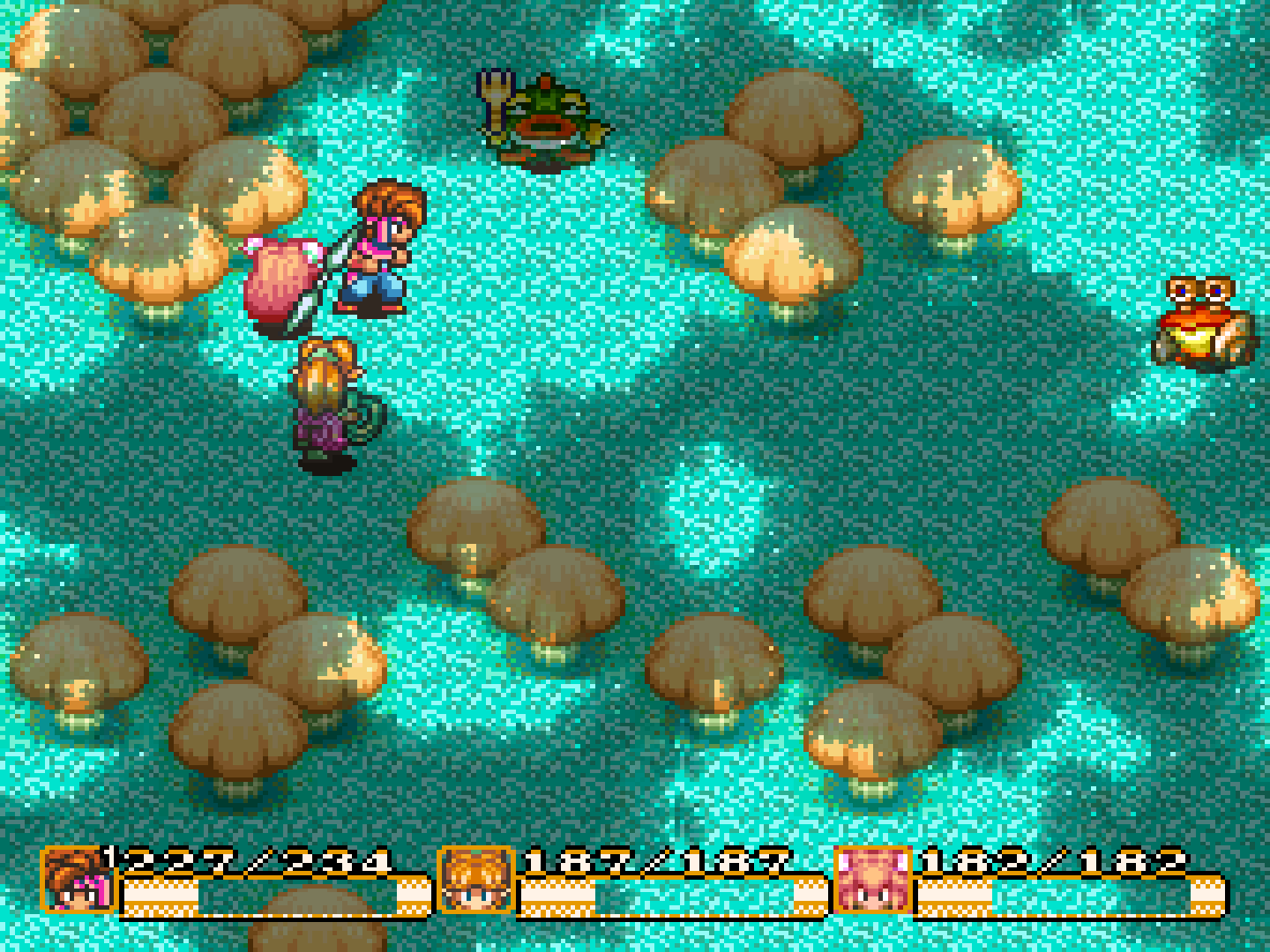 What a maze this place is!

The Water Thug can also do spin attacks!?

Alright, a few more monsters, and a lot of spells to cast here...

I seriously need to get more Medical Herbs now...

I'm now inside the dragon cave, where the typical battle music's playing this time...

We climb to the second floor of the cave.

I have Max cast Gem Missile on the Kimono Bird, which causes ultra-effective damage!!!

There's plenty of chasms in this cave! 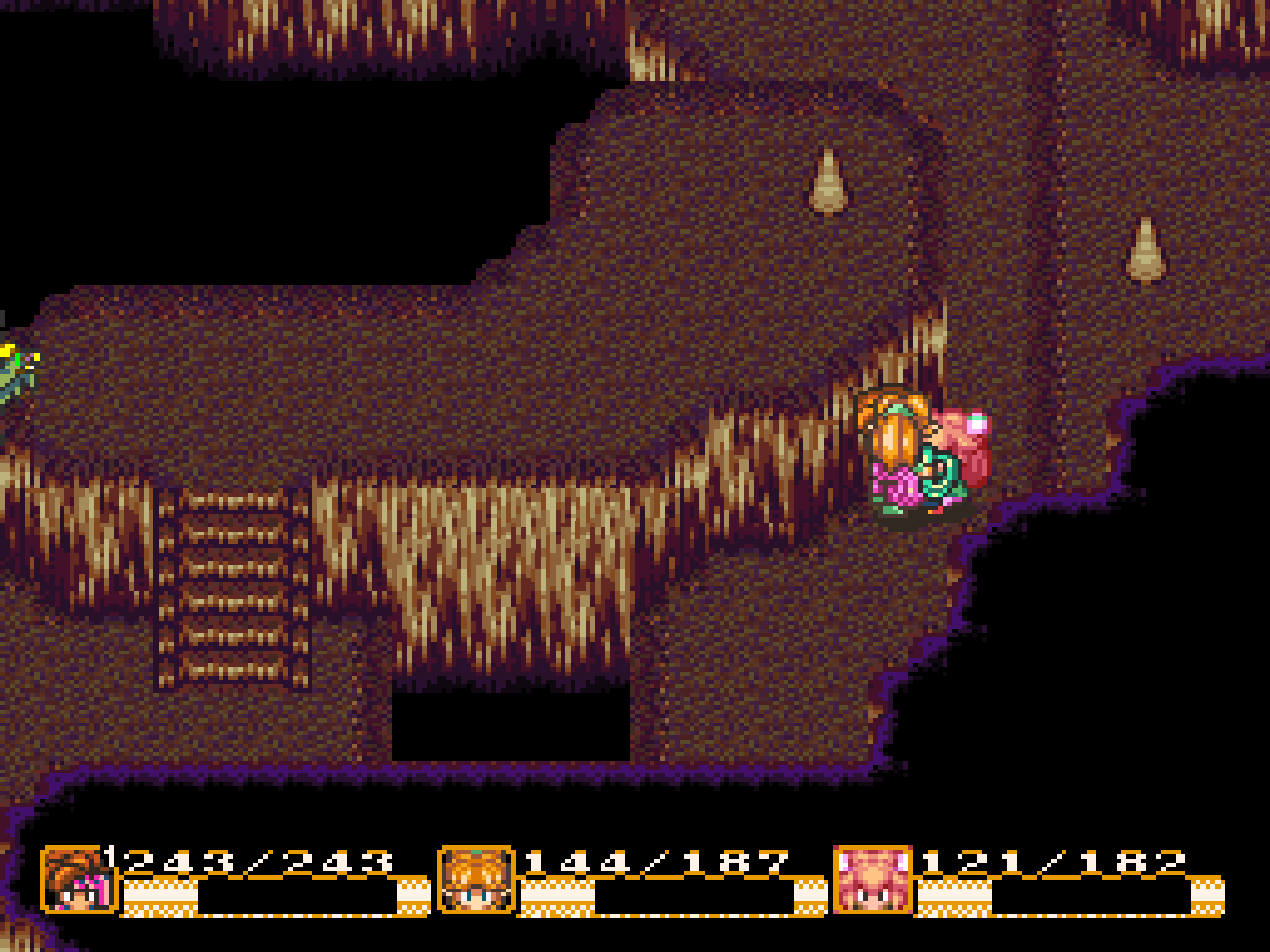 We go to higher ground and I have Hero and Pidge switch weapons to cross to another ledge!

The Kimono Bird, I realize, is the one that spawns the Pebblers!

We head downstairs again and take care of a Kimono Bird before ledge jumping via whip again...

I'll have to stick with Hero using the whip this time in any case we run into other spires to use as jumping posts...

We climb down another set of steps...

...where we get a crowd of Kimono Birds and Pebblers awaiting us!

Now which staircase should I take?

I go down the eastern one first.

Nothing here but rocks...

The whip doesn't seem to work on Pebblers, probably because they're too quick or too small to hit!

This cave is the most complex to traverse around...up one minute, and down the next! Plus, there's monsters to worry about here! 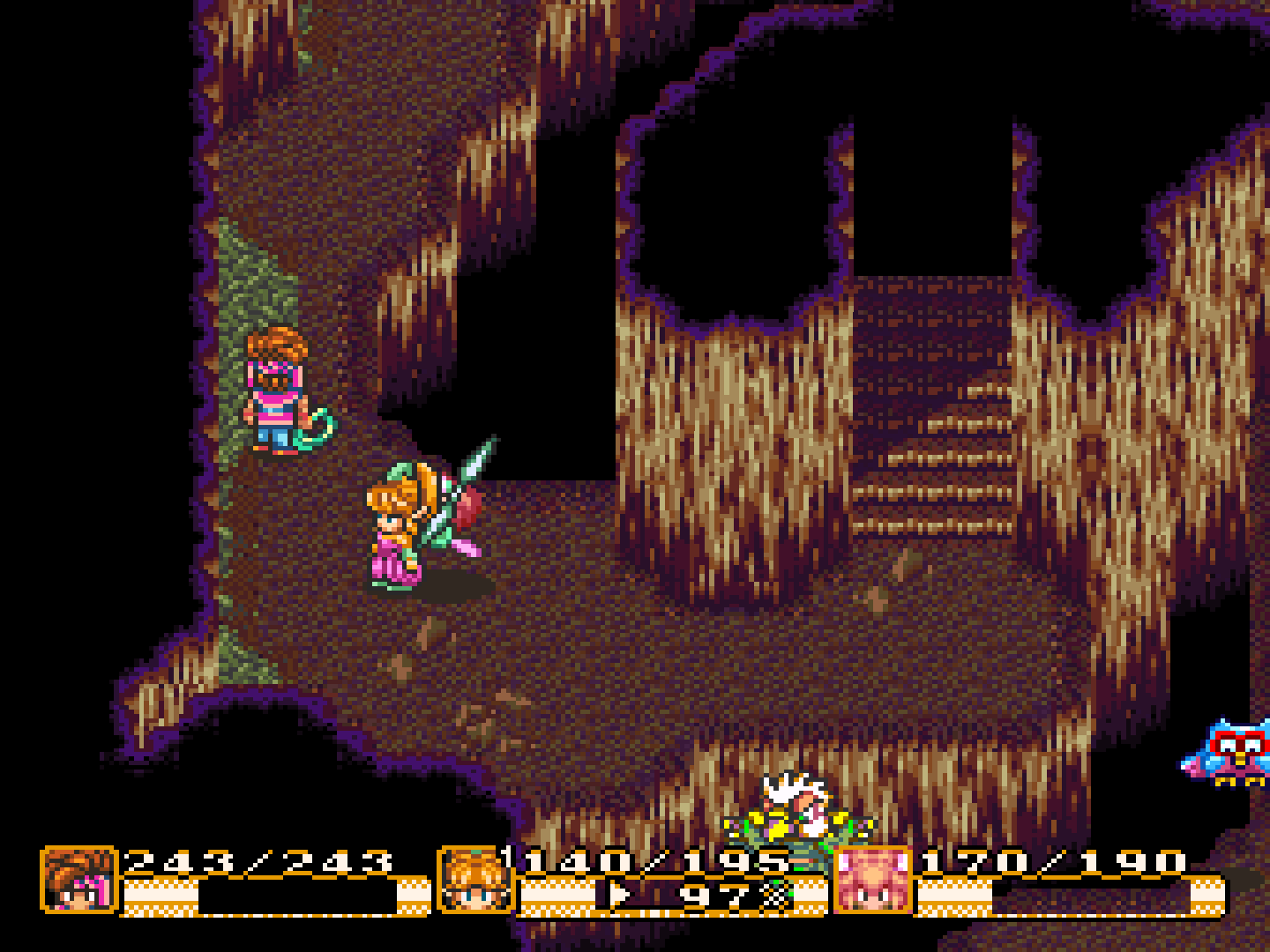 Fighting monsters, though, is leagues better than solving a very complicated puzzle any day!

We climb up another set of stairs...

...and after taking care of very quick Pebblers, we find another crystal orb at the end of the passage!

I have Max use an Air Blast. No effect.

I have Pidge Analyze the orb. Only earth magic's effective on this orb!

A Gem Missile won't work, so maybe an Earth Slide will do... 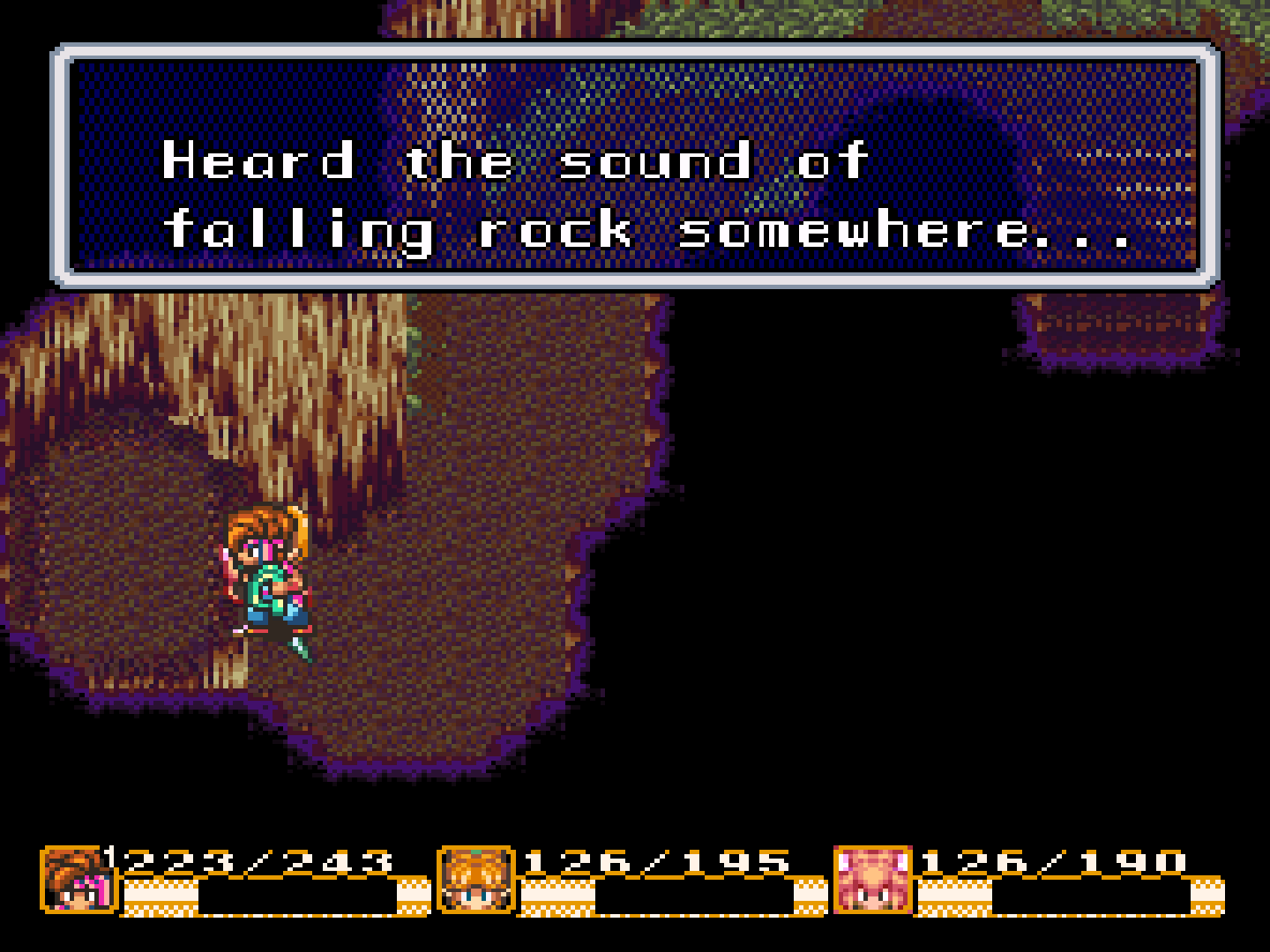 I go down and head back to that area with the two staircases...

Back up, where I fight more Kimono Birds.

While heading back to the crystal orb room, a Kimono Bird unleashes his Thunderbolt on Hero!

Destroying the orb cleared out the stalagmites in the middle passage!

Now I take the flight of stairs down...

...to where more Kimono Birds await! 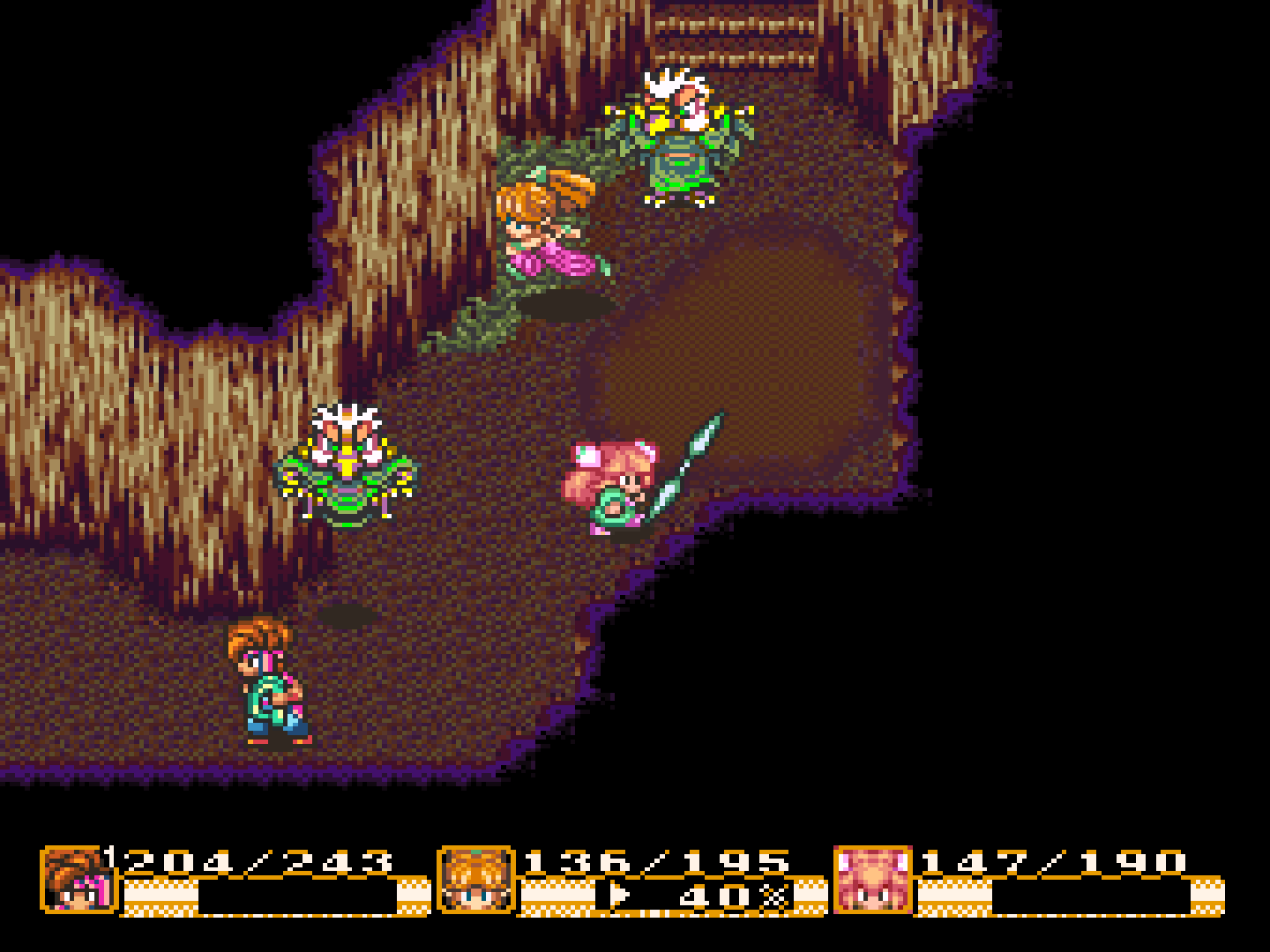 Gem Missiles on both of them!

A big open tunnel here might lead us to where the dragon is! 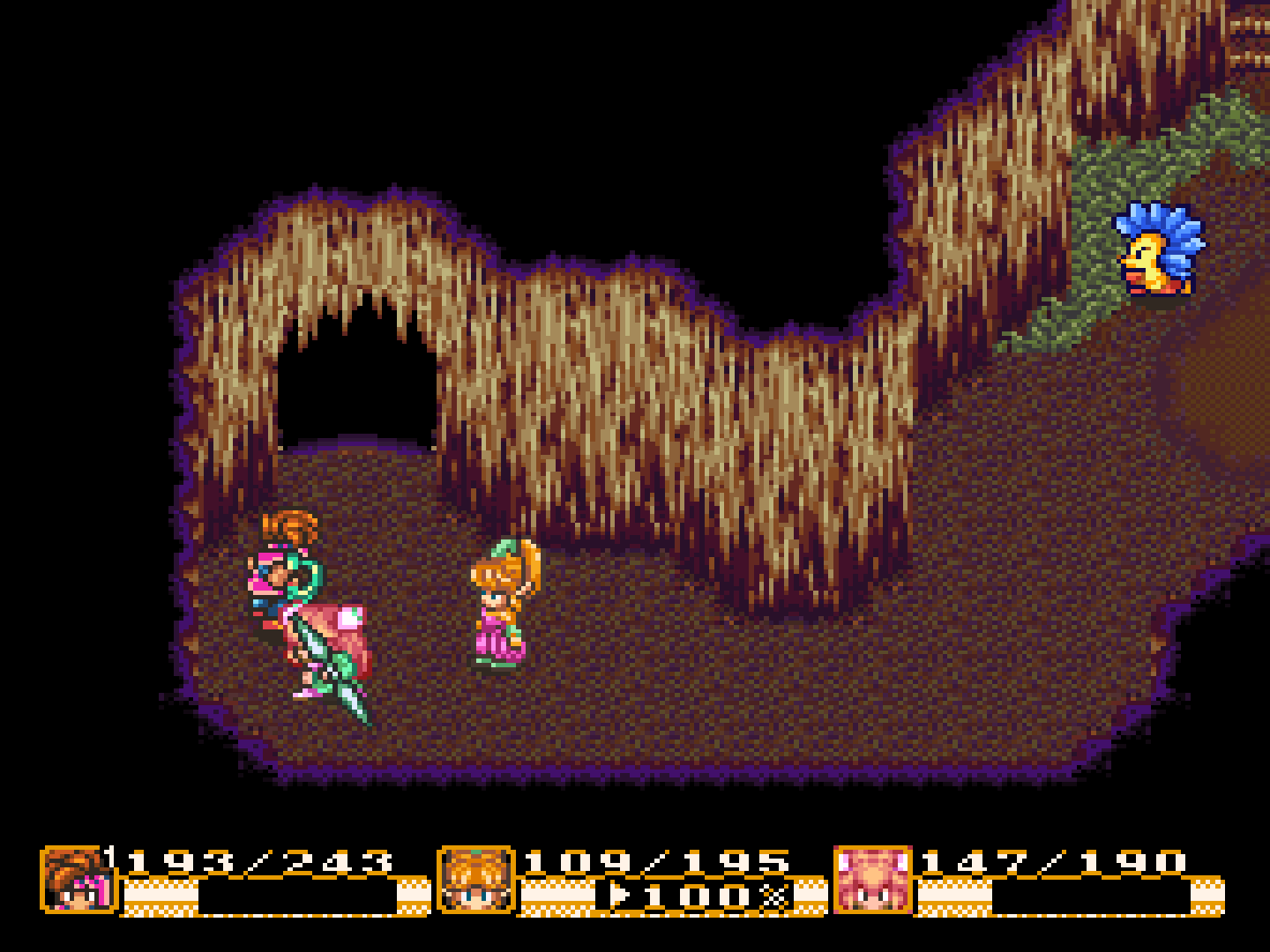 But as soon as we enter the tunnel, leading us outside, danger greets us again!

There's a huge snake slithering about the wood!

It casts its level 5 Gem Missiles on Pidge!

It hisses and crawls by Pidge! 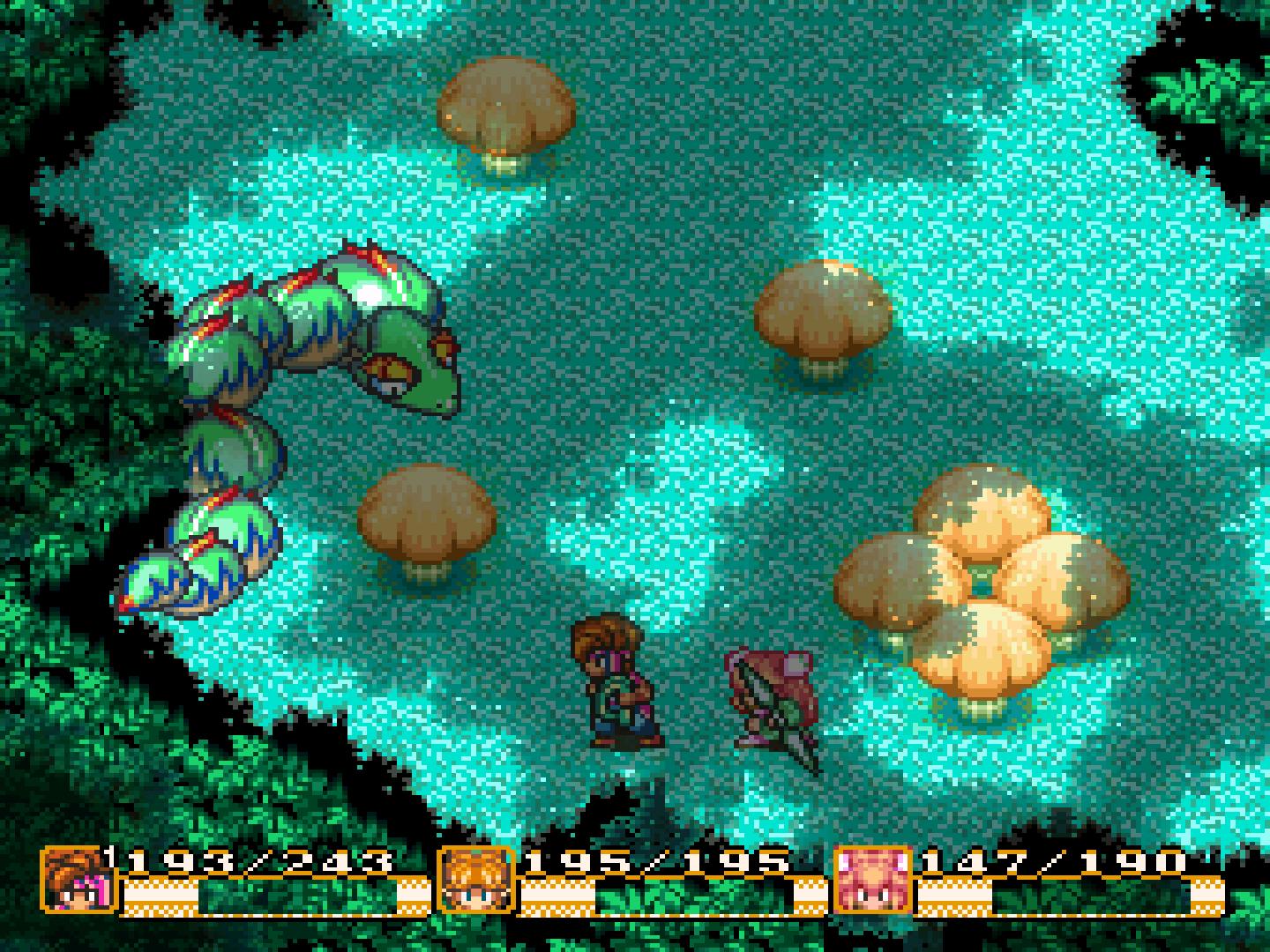 Unfortunately, as soon as the snake touches us we get "pygmized," or we get hit with a Mini status!

And Max falls to the reaper!

The snake, or the Great Viper's, fracking fast!!

I have Hero whip at the Viper's head! It seems to work!

After tons of recovery, I decide to take control of Pidge and switch her weapon to the whip!

I have Pidge Analyze the Great Viper: it hates wind magic!

Before casting, Max falls again, and so does Hero!

I revive both of them...

I manage to have Max use his Thunderbolt spell on the Viper!

An Air Blast, and another Thunderbolt are also added!

I have a now Mini!Pidge use up the last Faerie Walnut on Max! This sprite is our only hope now!

Two more Thunderbolts and that tough snake is gone! 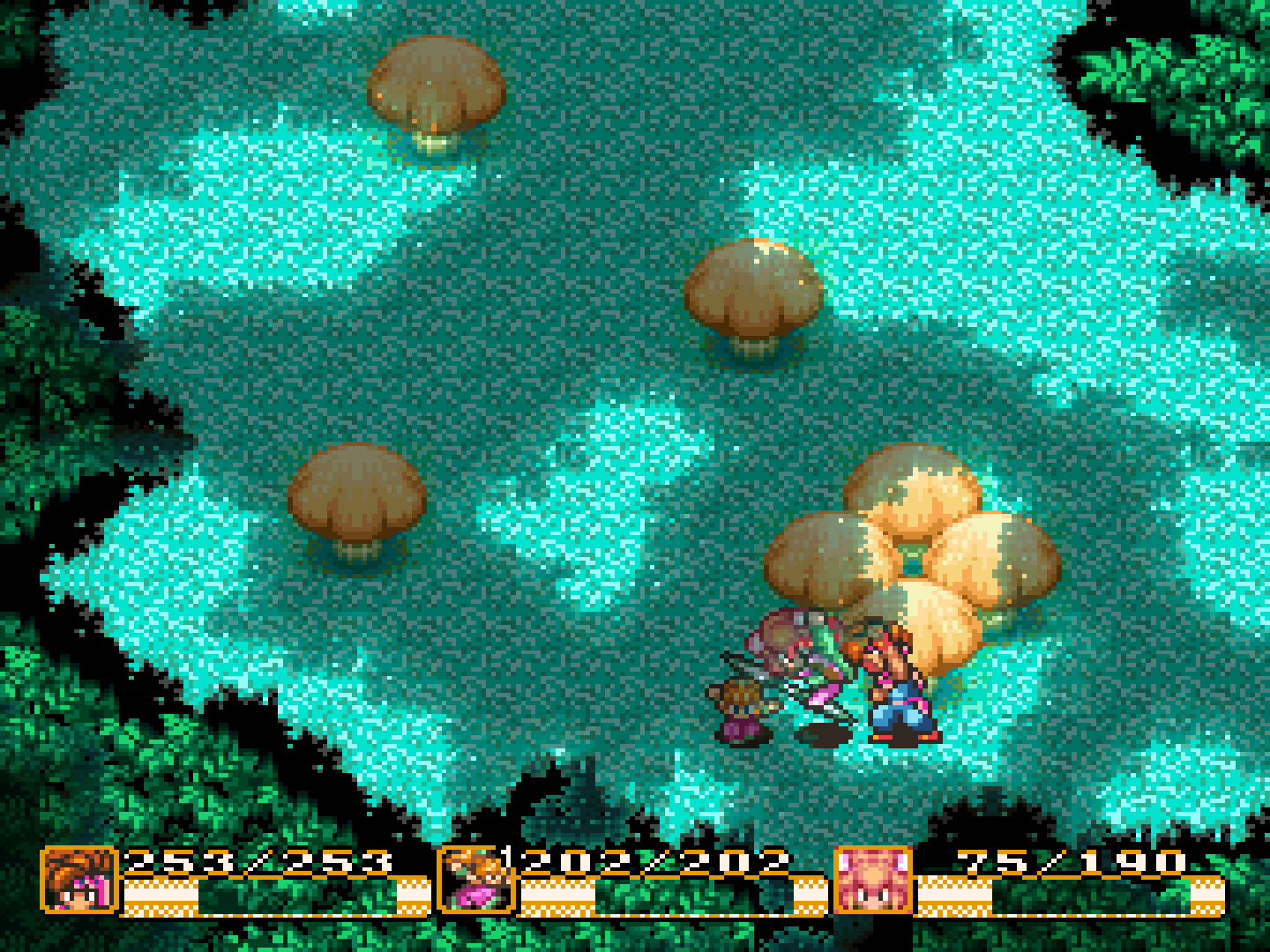 We get a Sword's Orb as a reward for finishing him!

The Spikey Tiger may have been tough, but this Great Viper's more difficult, imo!

We press on ahead, the dragon must be close!

This tunnel must lead to where the dragon is! 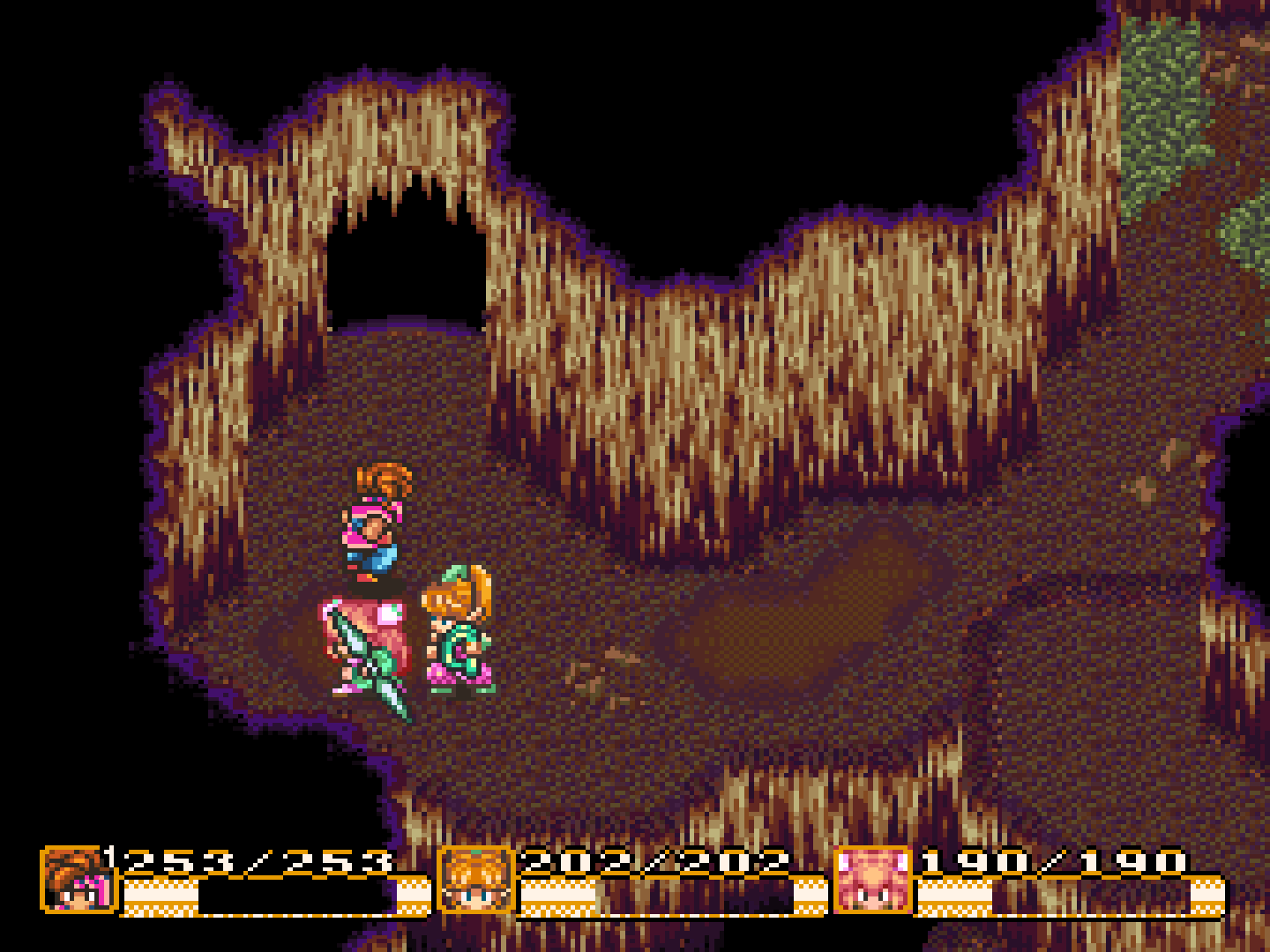 There's plenty of lights peering through this part of the cave... 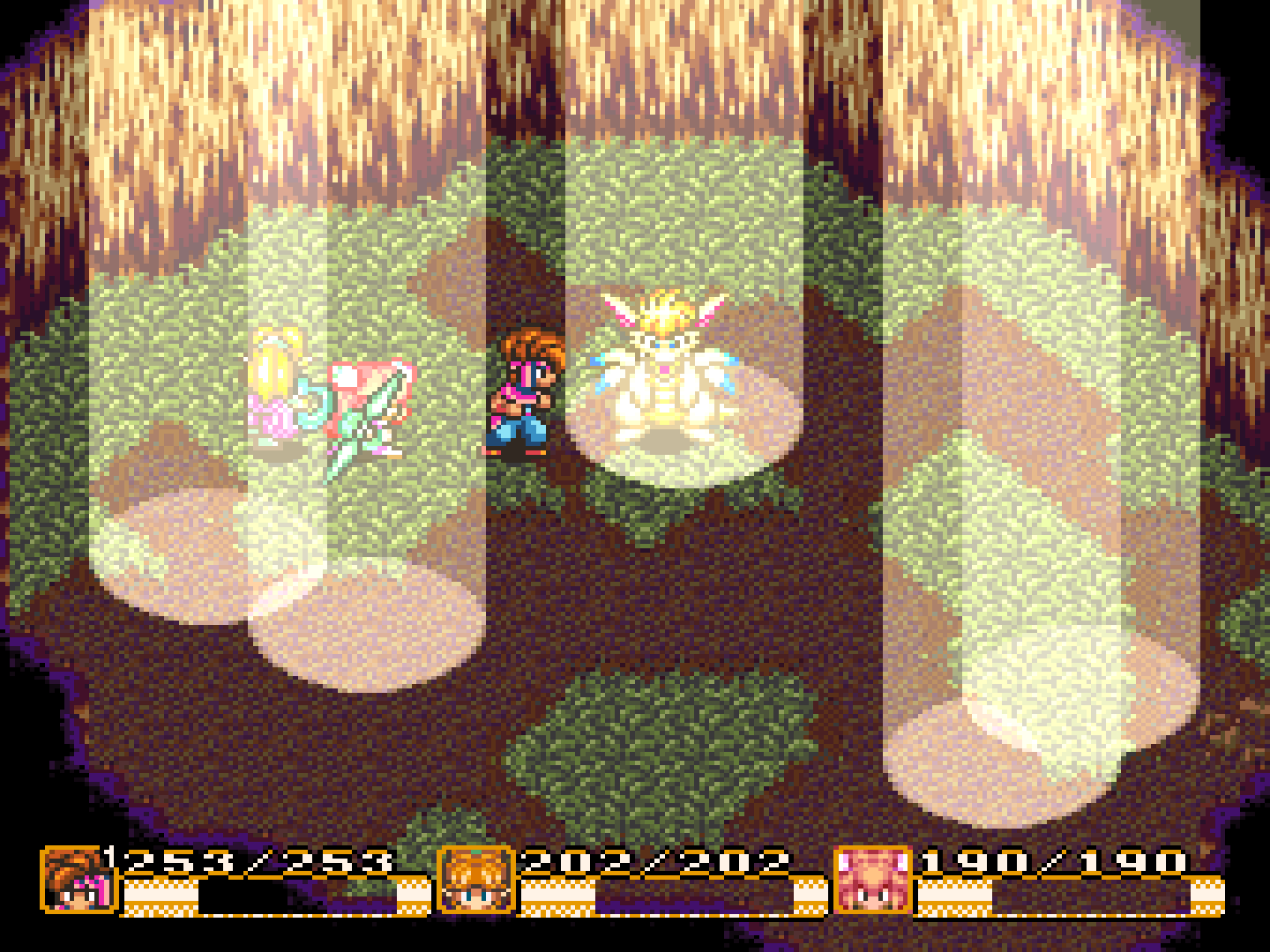 "This is the legendary white dragon?" 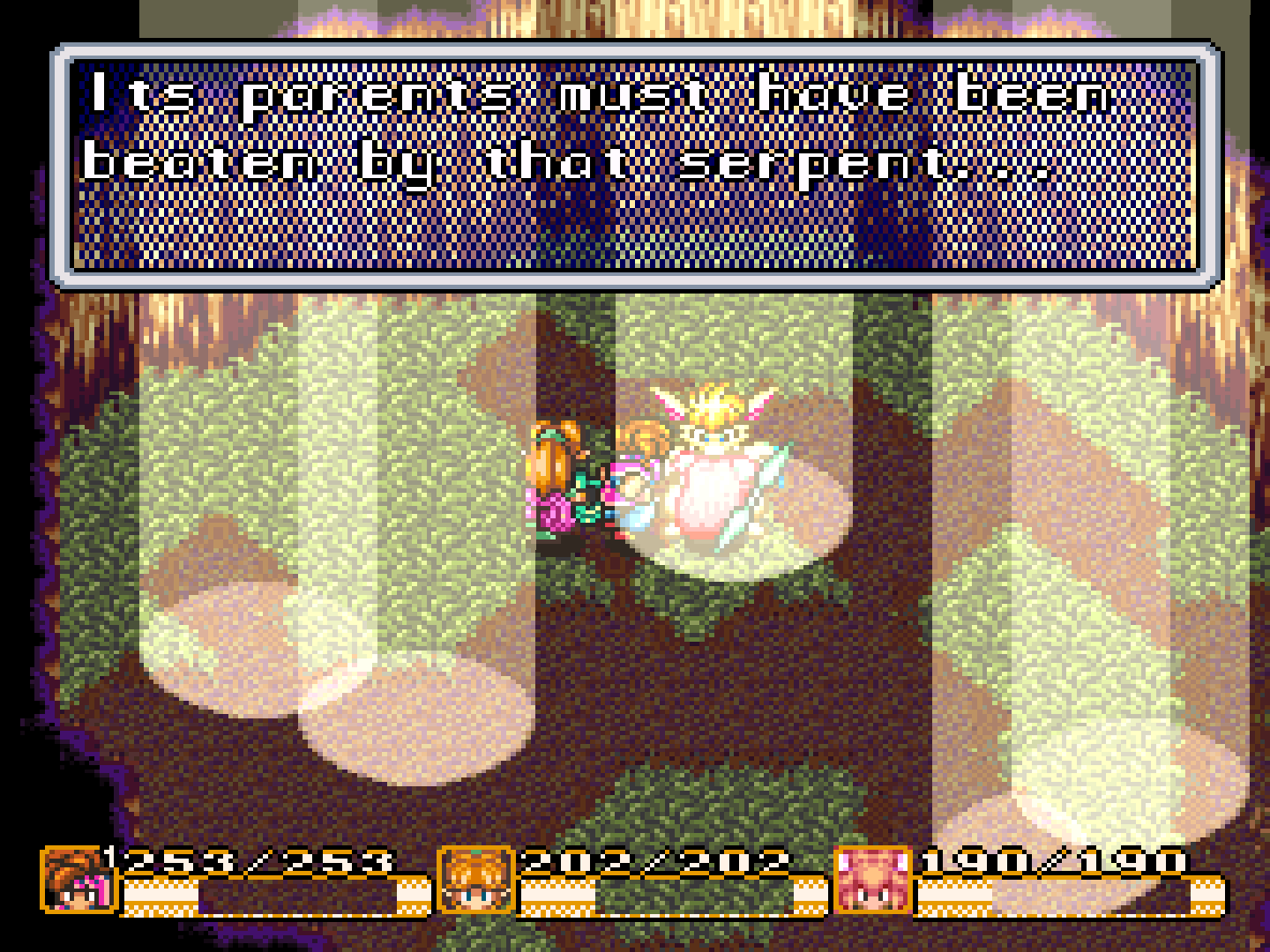 Pidge tells us the dragon won't survive if we leave him in the cave. She suggests going back to King Truffle to tend to him.

Back at Fung Castle, the dragon's sitting next to King Truffle. Truffle immediately takes on the task of caring for him... 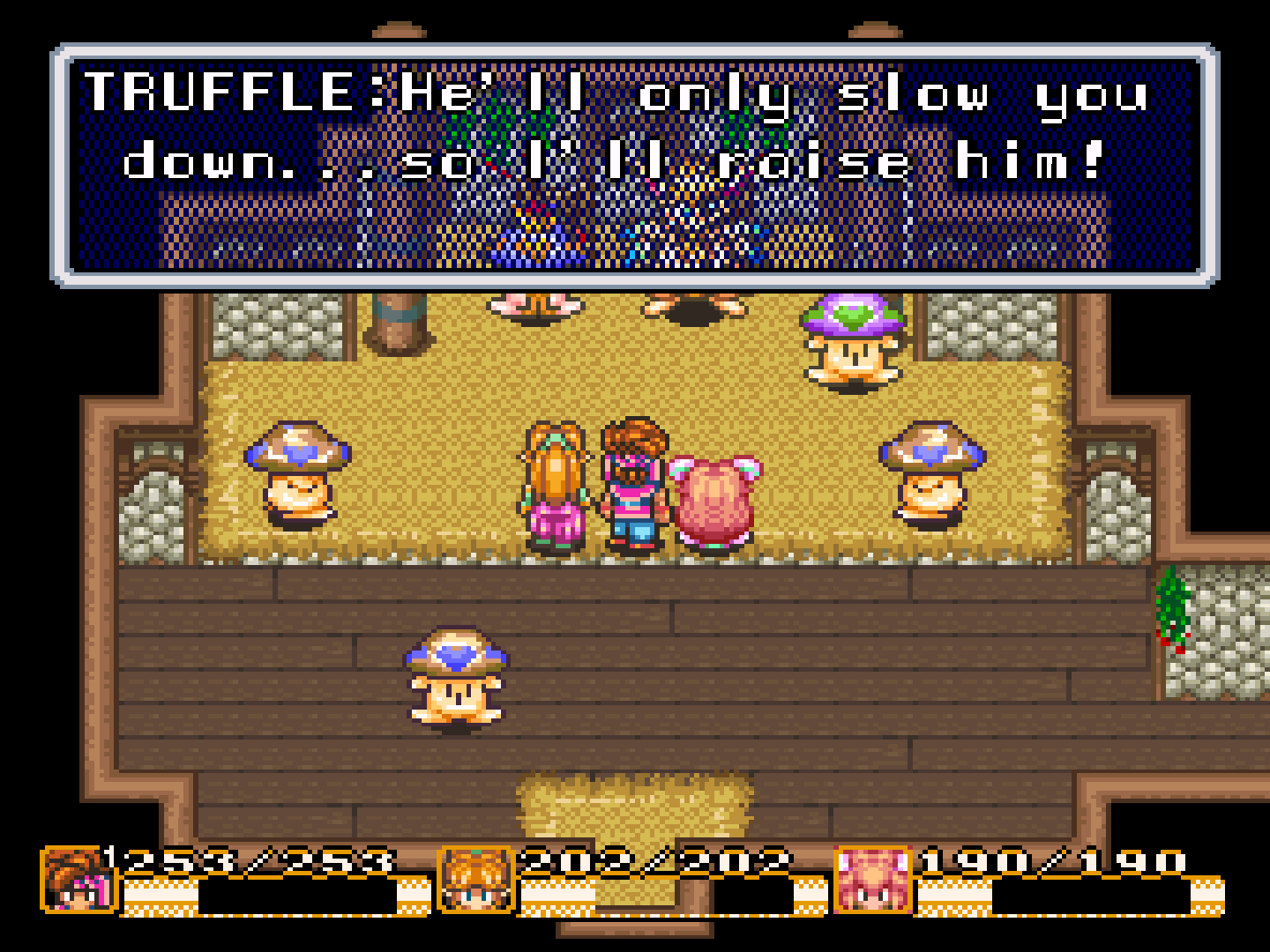 The Nobleman tries to object, but King Truffle won't have it!

Truffle: "You three get going. I'll take care of him! By the way, how do you like the name 'Flammie'?"

We're given a decision, but the King stops us before we could decide. 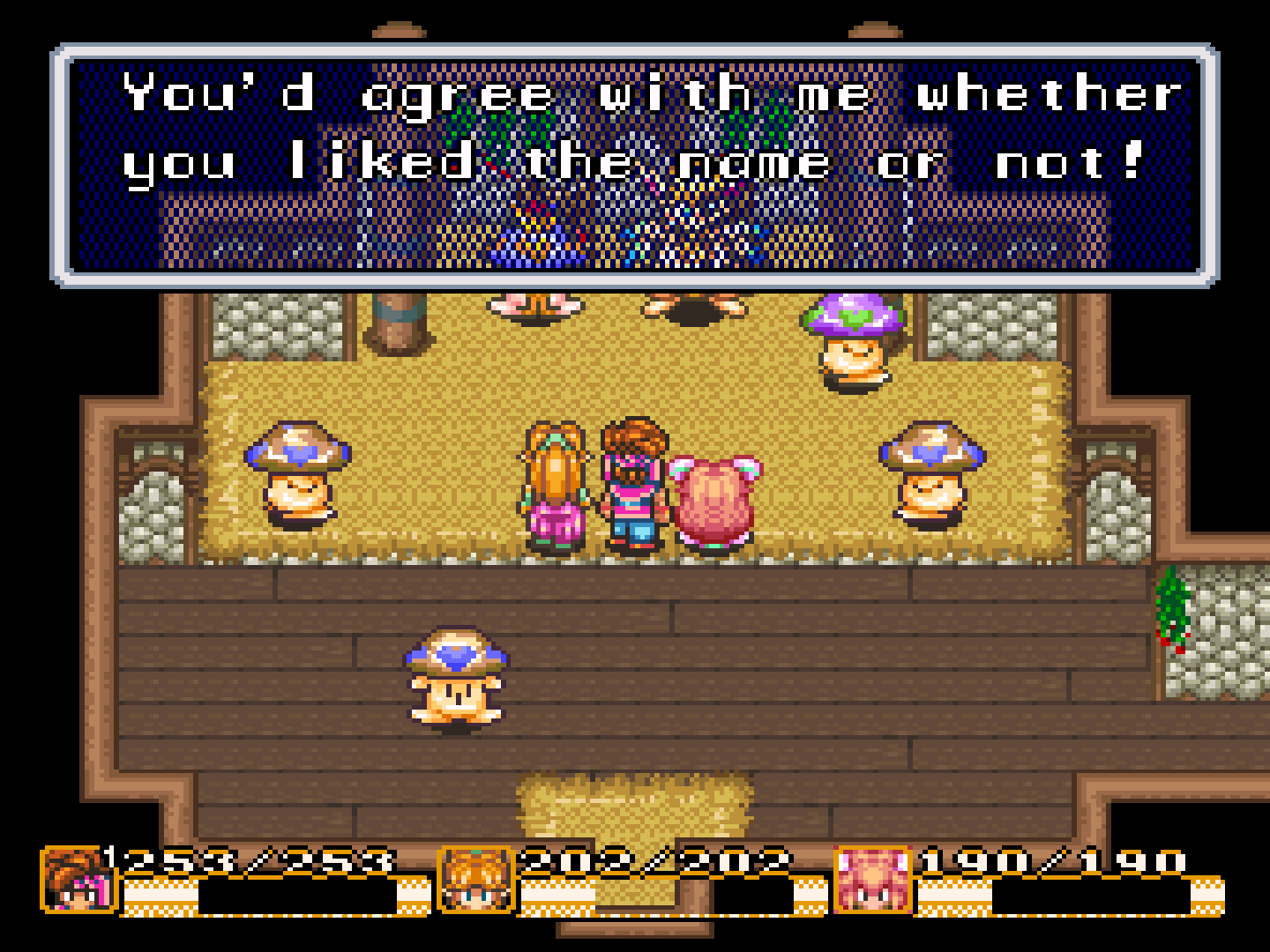 I'm guessing King Truffle might not like our name for the dragon, and decides that Flammie is the white dragon's name! 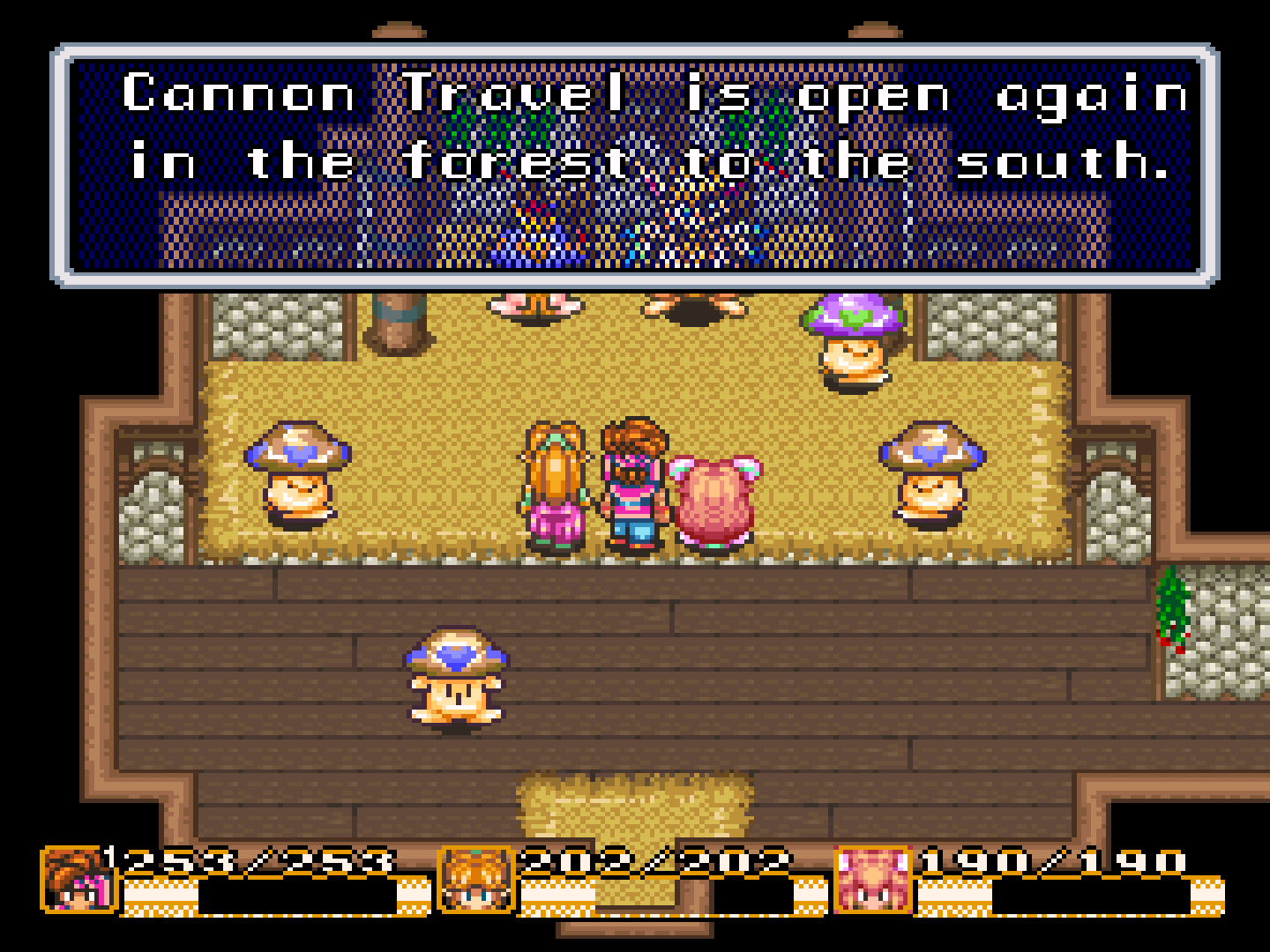 Yes!!! The Cannon Guy got his fuses for the cannon!

Now that the Cannon Guy has his fuses, the King gives us our next destination! 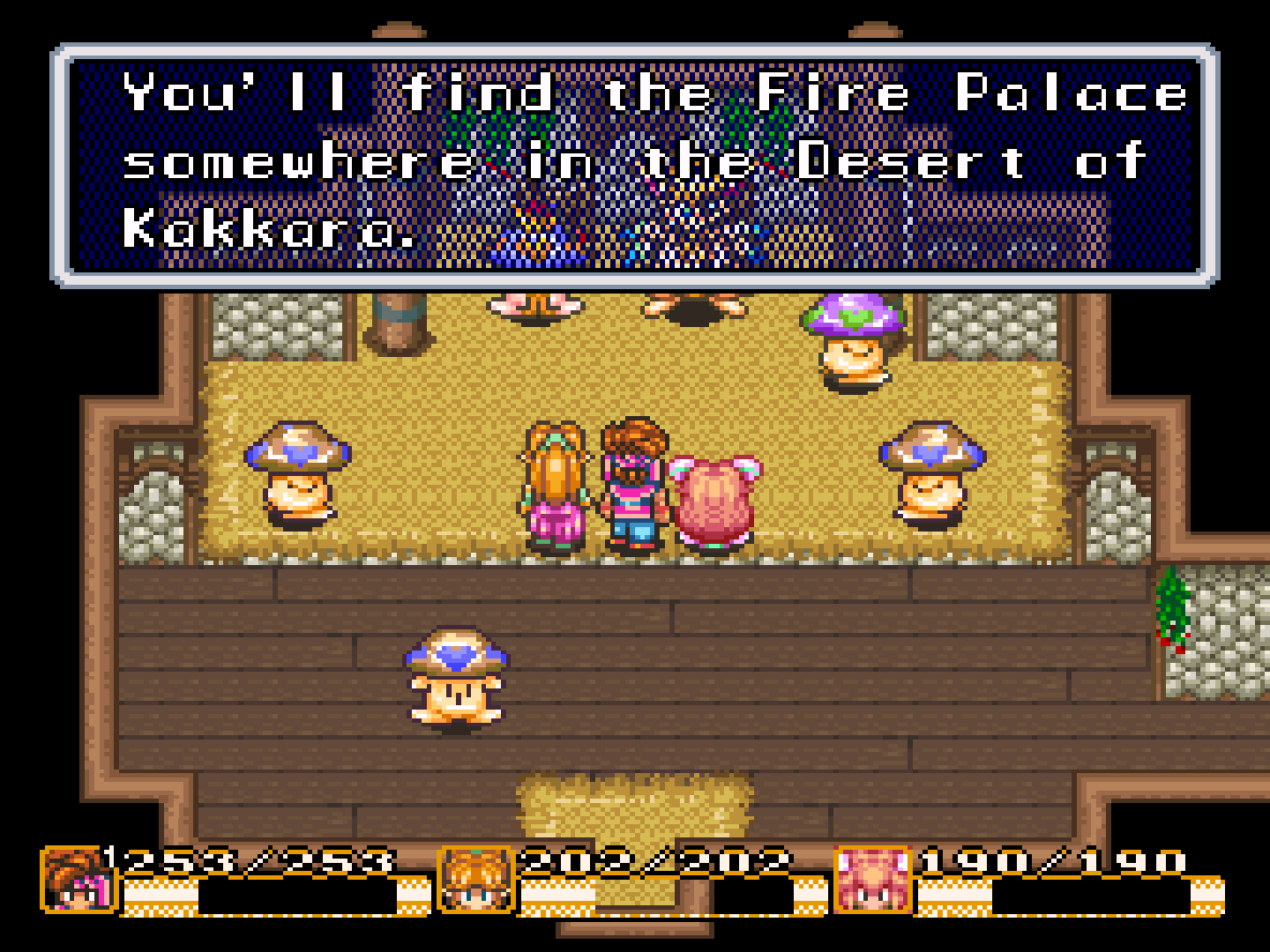 The Fire Palace in the Desert of Kakkara...

I talk to the King again, who says Flammie's fine!

Flammie lets out a happy yelp.

The Nobleman knows that Hero is the Knight of Legend. 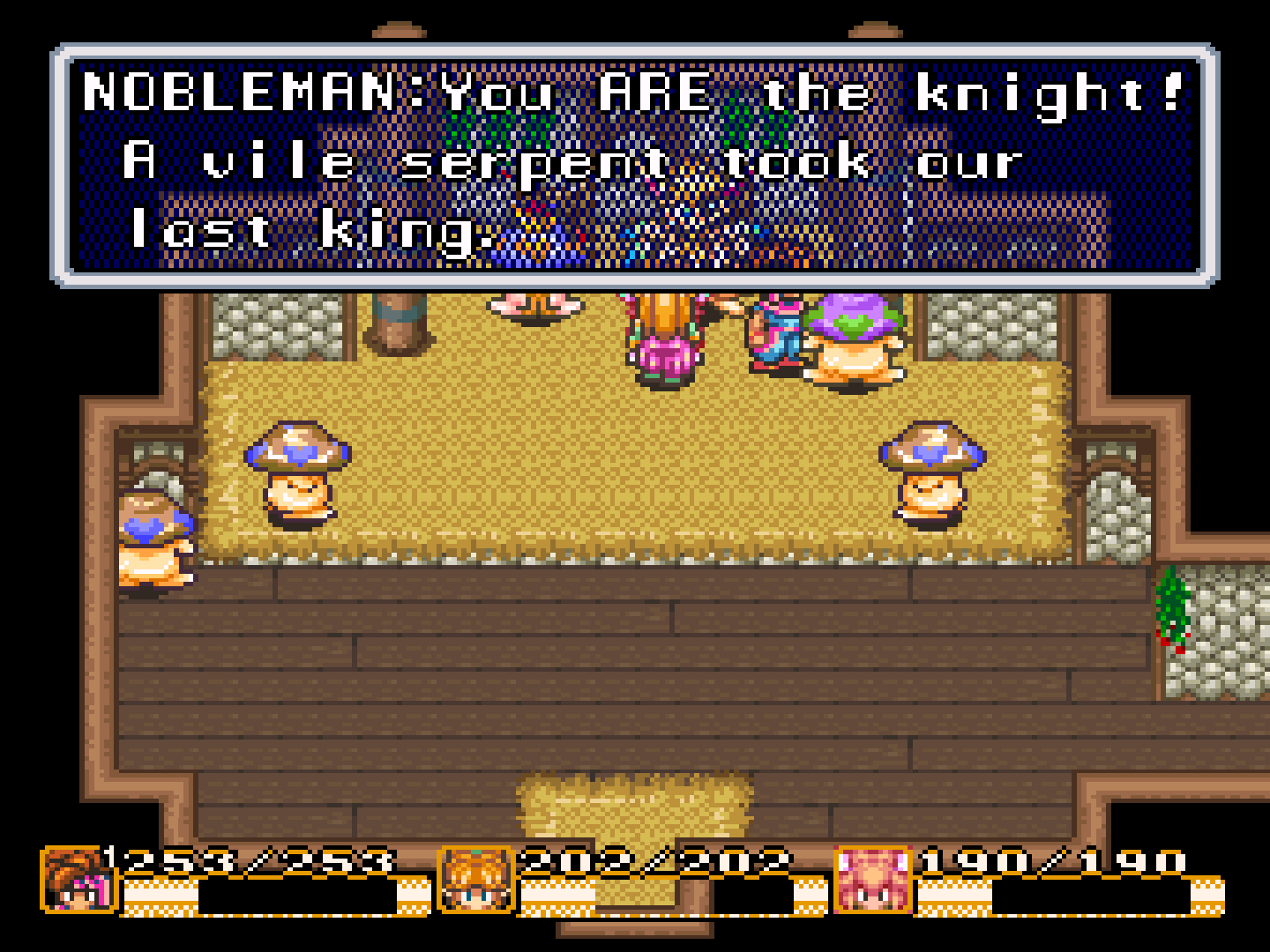 One Mushboom couldn't believe a white dragon's standing before him!

I head back to Watts for more upgrades.

I upgrade all that I have! 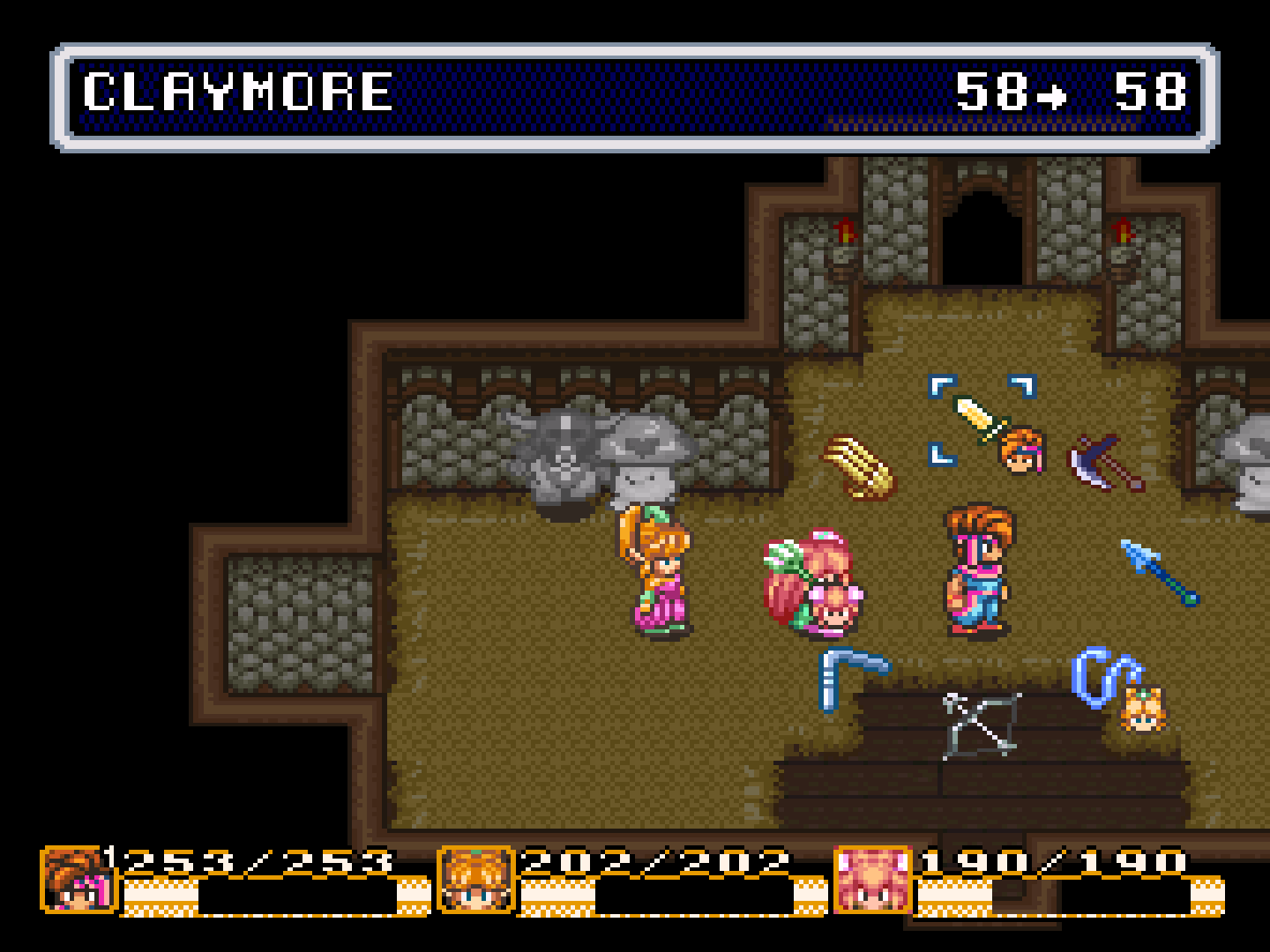 The Claymore and Moogle Claws are gold plated, while the Light Trident is emerald tipped!

The Claymore's effective on insects, the Moogle Claws cause sleep on its enemies, and the Light Trident's effect is the same as the Javelin's before it.

I have the party rest up...

So our next stop is the Desert of Kakkara for the fourth Mana Seed...