Aside: As of writing this post, the remake for Secret of Mana is already out, not just for the PS4 and Vita, but for Microsoft Windows too!

Returning the Mana Seed to the Water Palace now...

Attacking the Buzz Bees and other monsters with the Spear does massive damage! 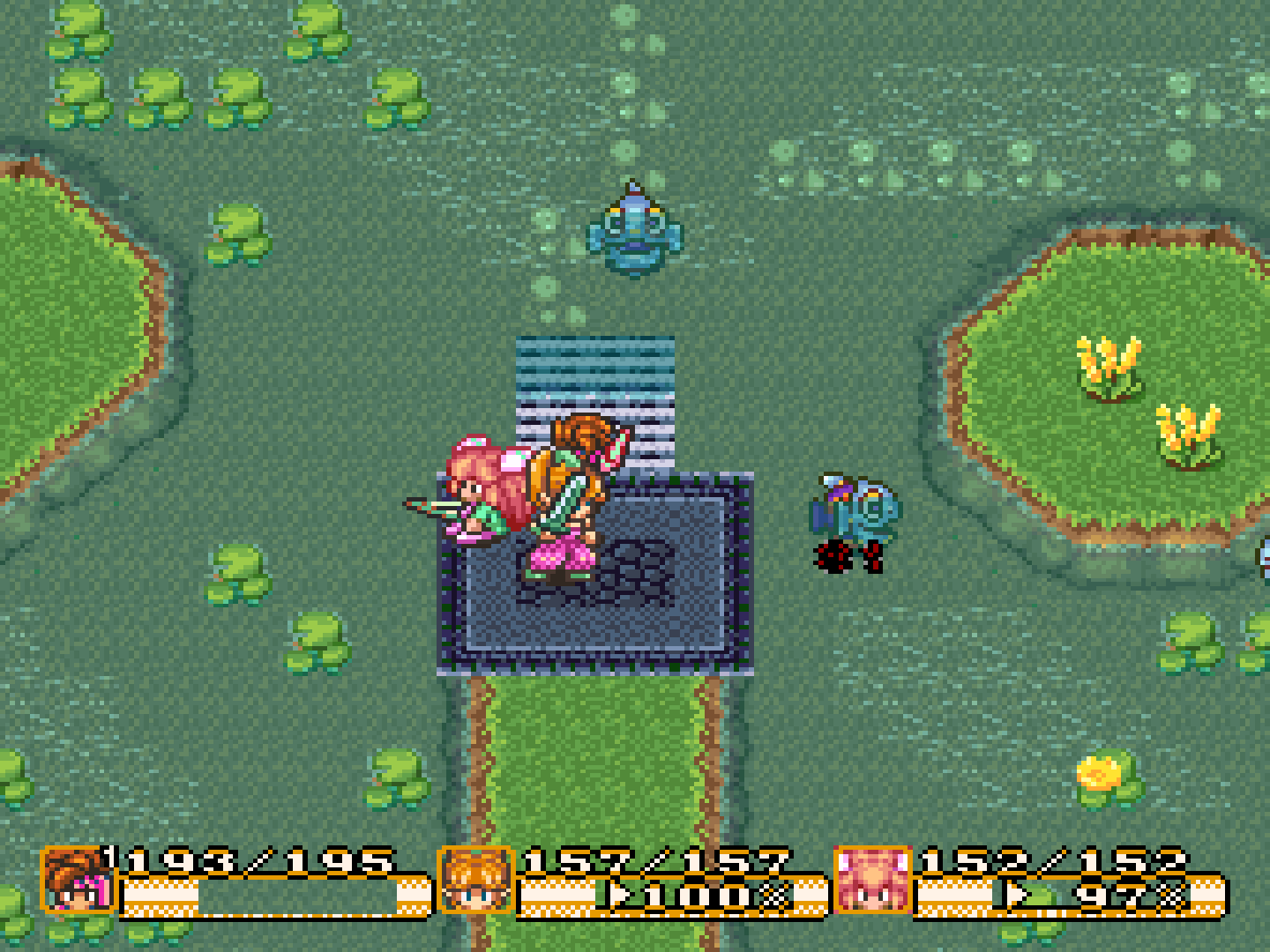 Inside, the Water Palace is invaded by more monsters such as Water Thugs! It's probably because the Mana Seed's not in its dais...

The music I heard when I first visited Elinee's chamber is also heard...

We make it up to the Mana Seed chamber... 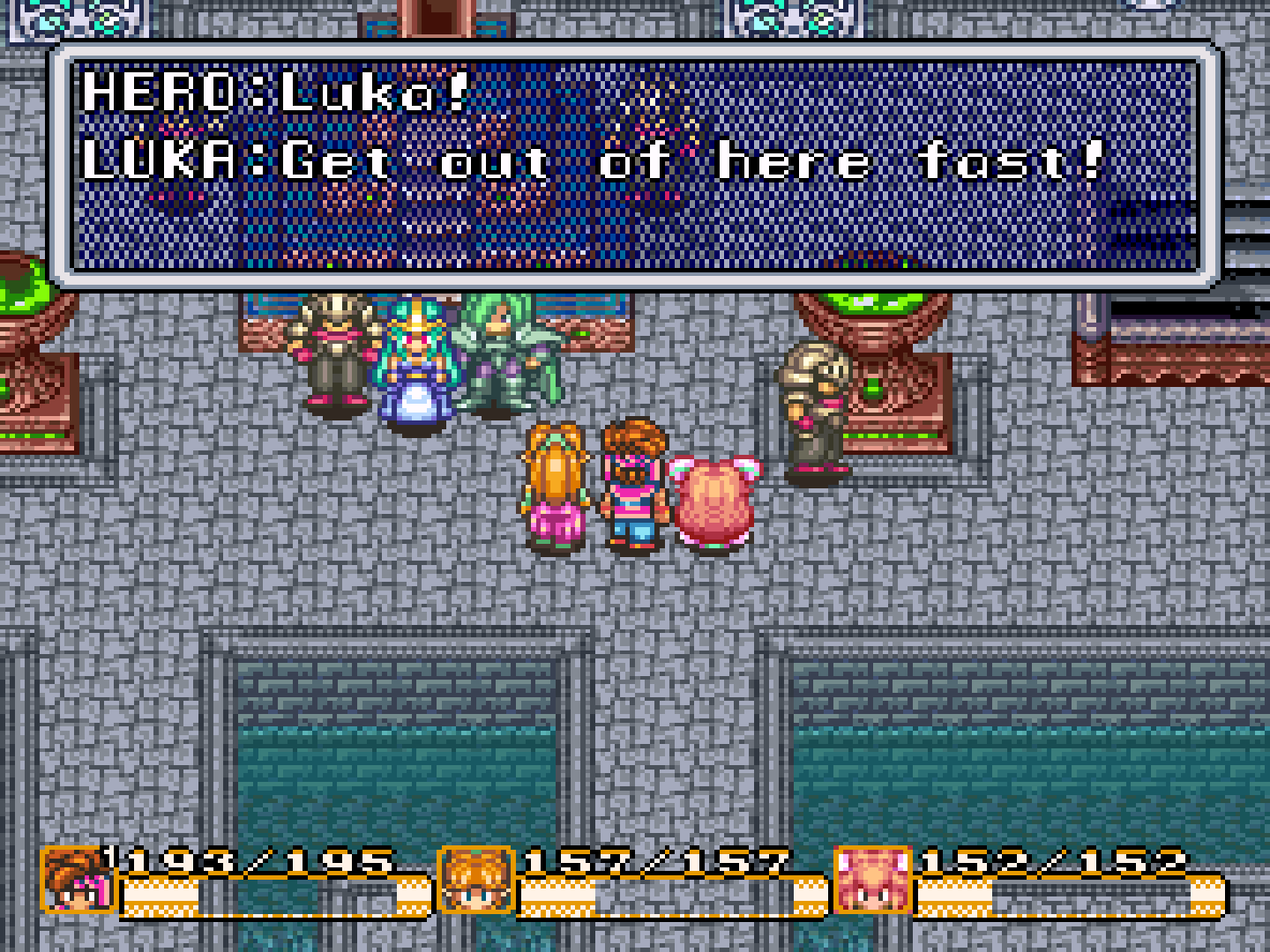 The green-haired man with the Peek-a-Bangs steps forward and introduces himself as Geshtar of the Empire!!! 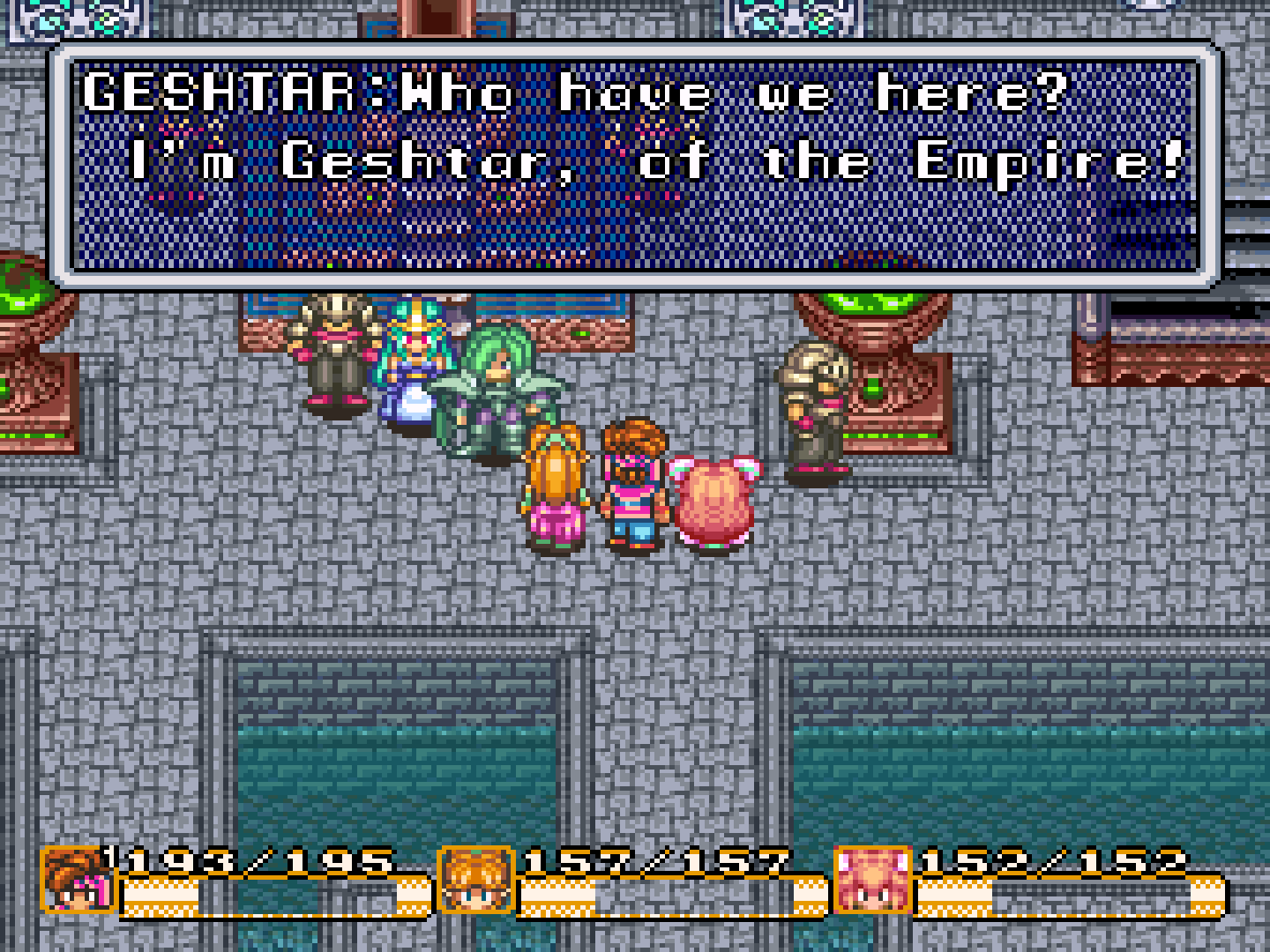 So the Empire's now come to take the Seed.

He tells us to hand over the Mana Seed immediately. Luka shouts at us, "DON'T!!"

I decide to run away.

But Geshtar pulls the party back and snatches the Mana Seed!

He places it on the dais and seals the seed...

Luka tells him to stop, but Geshtar ignores her.

We're now transported into the large shallow water chamber on the second floor, facing another boss as a "parting gift" from Geshtar... 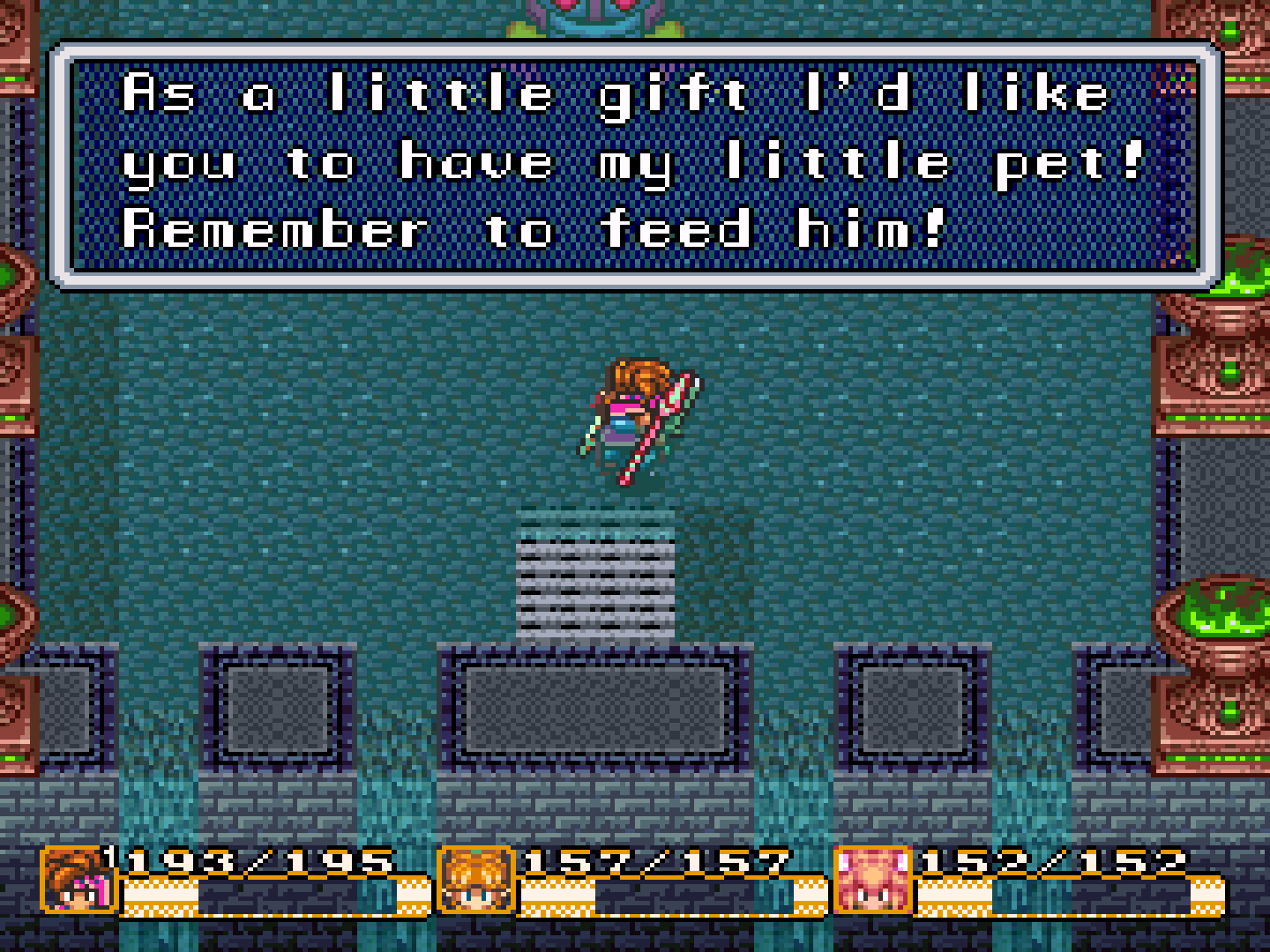 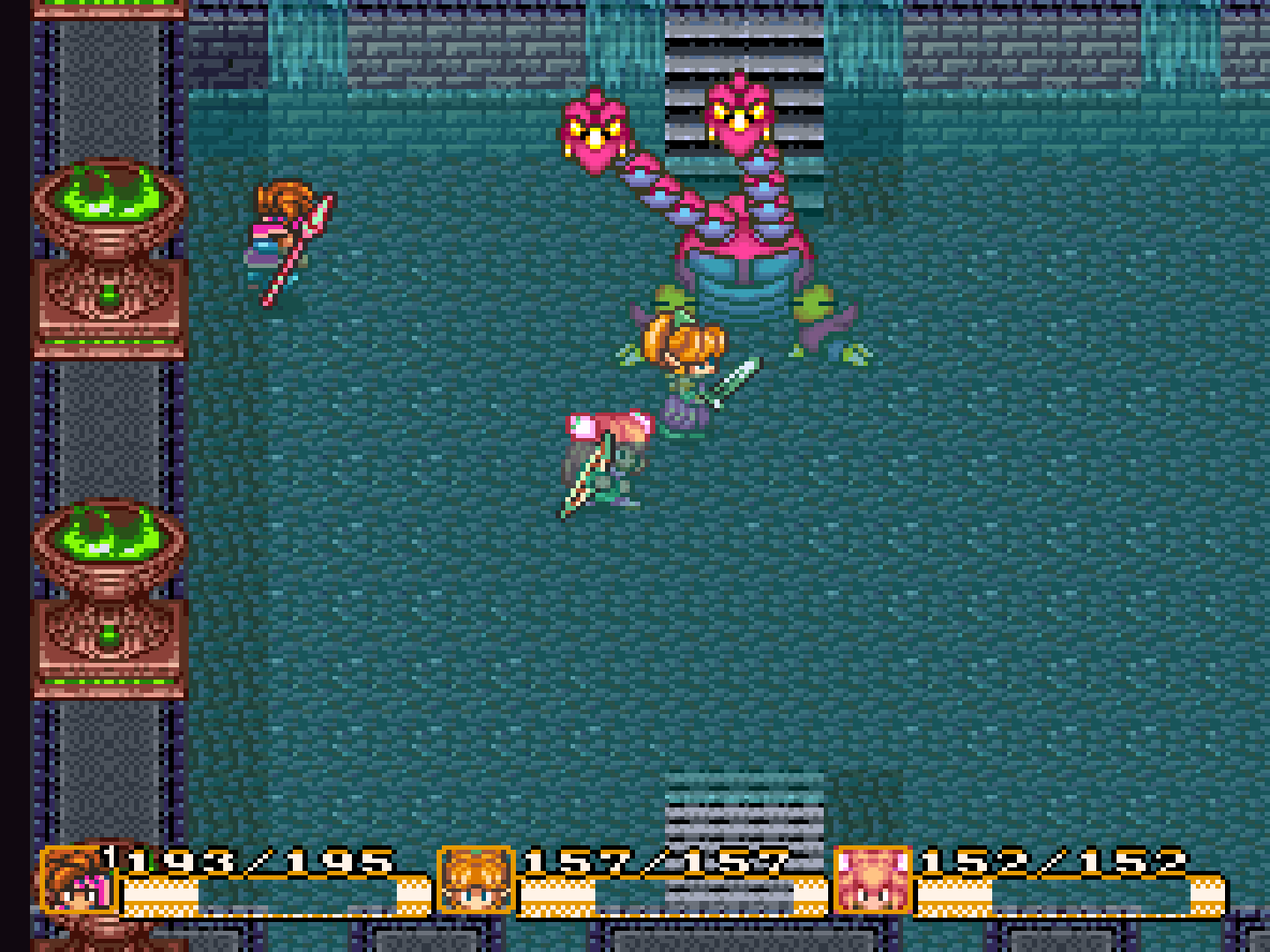 While Max casts Gem Missile, the Jabberwocky rains an Acid Storm on us!

After a few Gem Missiles, one of the heads of the Jabberwocky's gone! I hope this boss isn't like a Hydra, where its heads grow back!

The last head's resistant to Gem Missiles, or magic in general now, but he's now weak against Hero's spear!

I have Hero charge his Spear up!

A few blows later, and the Jabberwocky goes out in fireworks! 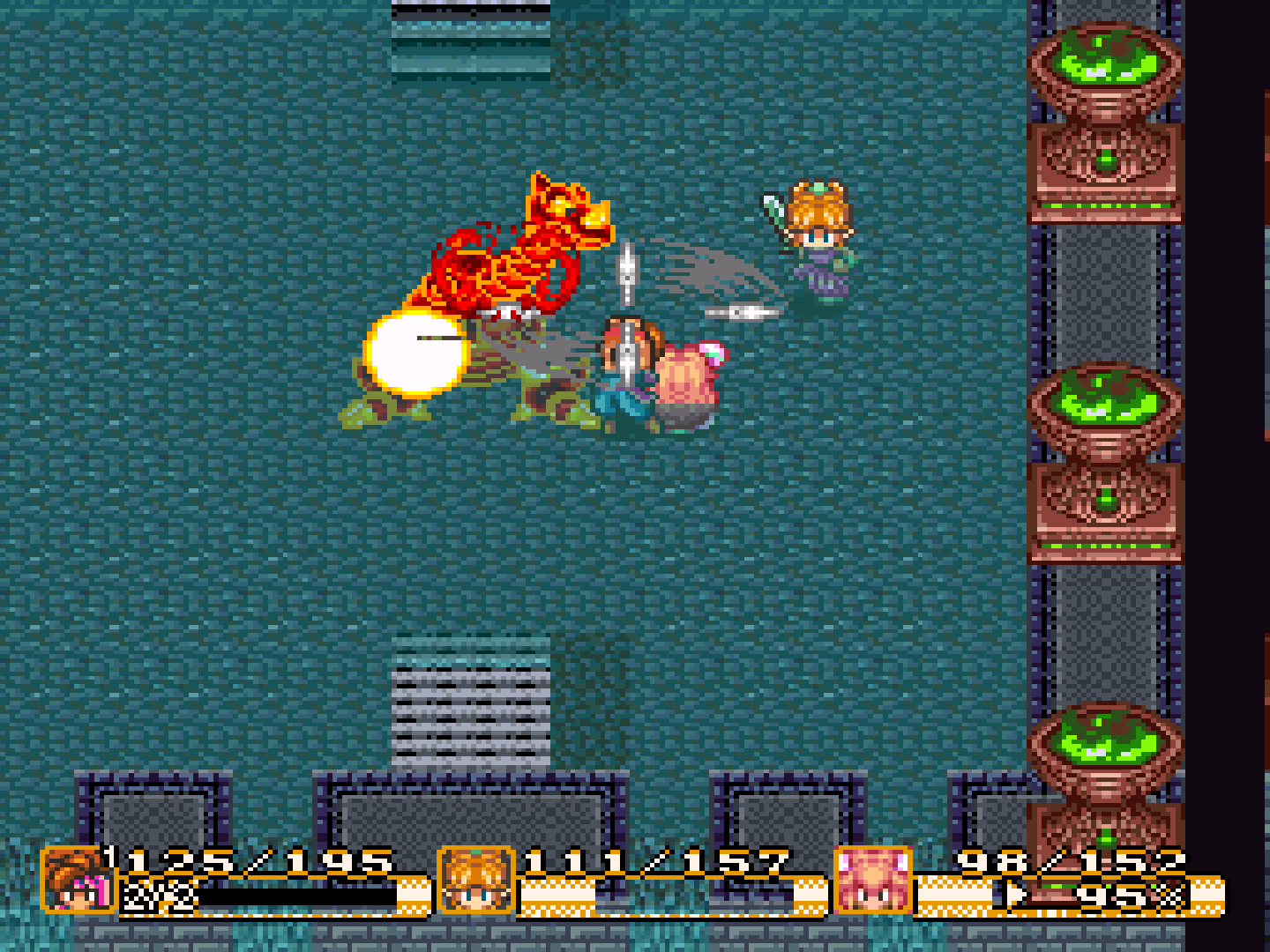 Jema tells us the Empire's retreated for now, and that his forces have destroyed their monsters in Pandora as well!

We get another Bow's Orb from Jema as a remnant from one of the enemies there... 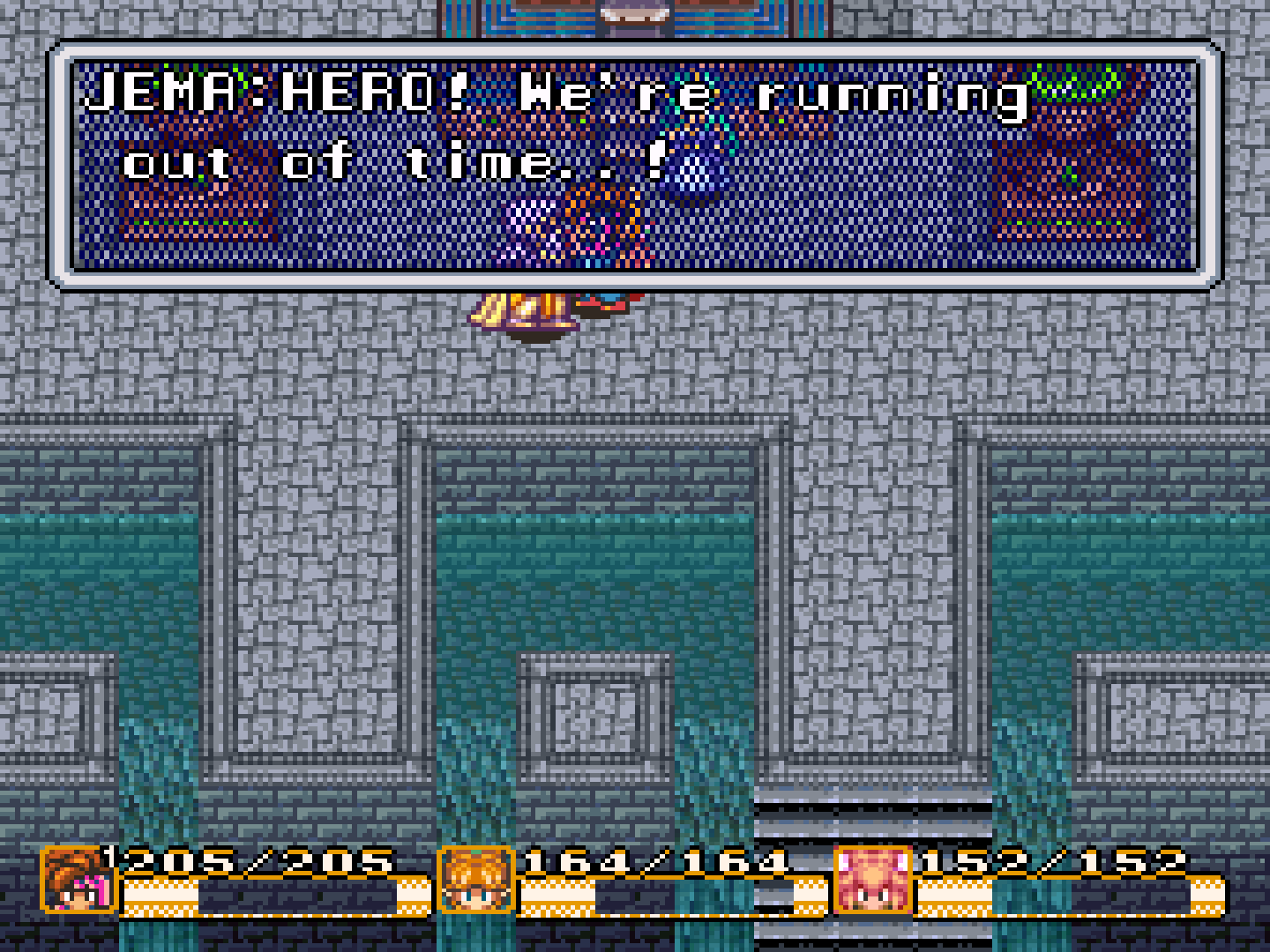 Jema decides to "return home" to Tasnica to hold off the Empire's forces...

He tells us that only a fully restored Mana Sword "can beat the fortress."

Jema tells us that the Cannon Brother near Potos Village can send us to the Upper Land! Yes!

Luka tells us to break the Mana Seed's seal with the Sword! 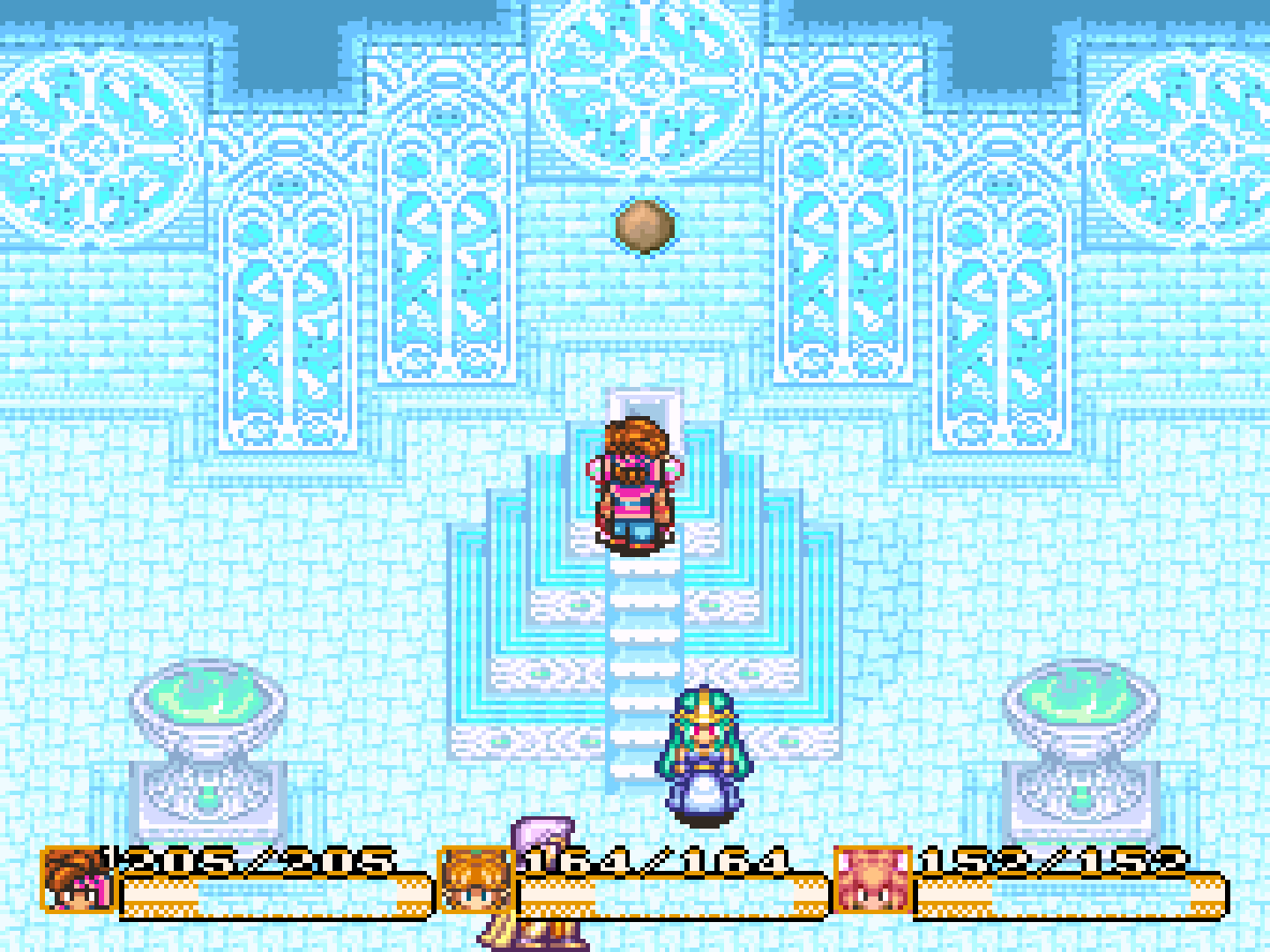 We get the Mana Seed's powers back!

Luka: "Pure evil seeks the seed now. You must hurry and revive the Mana Sword. Go to the Lofty Mountains and see Sage Joch to learn about real courage. Then, go to all of the world's palaces and reactivate all of the eight seeds! You will be able to receive Mana power from the seeds once you reactivate them!"

With our next mission noted, we head down to the chamber downstairs. Still nothing there.

We talk to Luka again for a heal-and-save.

Luka: "You must never lose hope!"