The moment we arrive, Luka gives us more bad news! 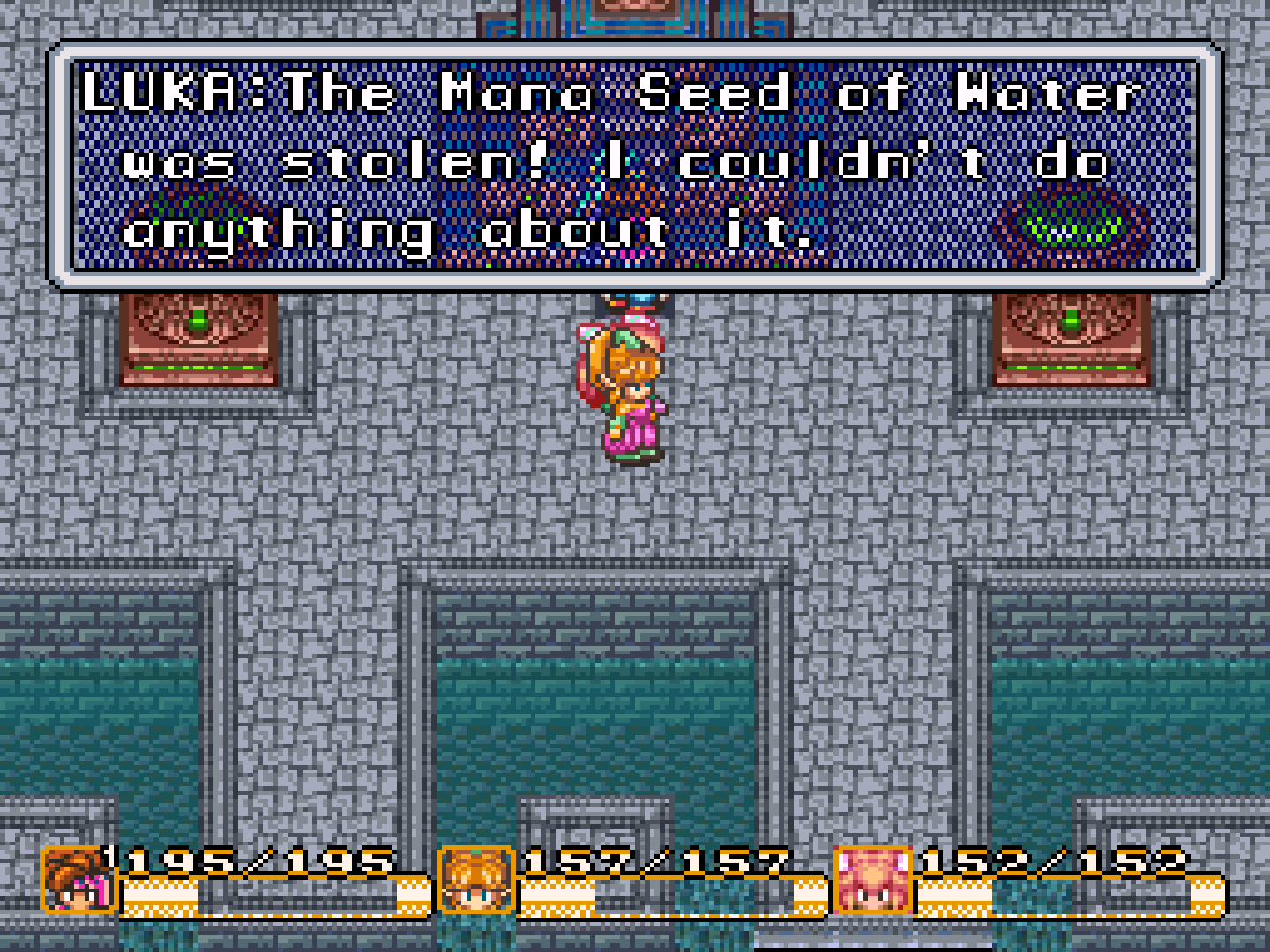 Luka thinks this might have happened while Undine was captured. This must have probably been a distraction tactic to take the Seed. They must have also used Thanatos to distract us!

Luka says that according to the water, the Water Mana Seed was taken into Gaia's Navel, or "deeper." I wonder if she's referring to the Underground Palace?

But she gives us one more piece of information: she says it's not the Empire that stole the Seed! 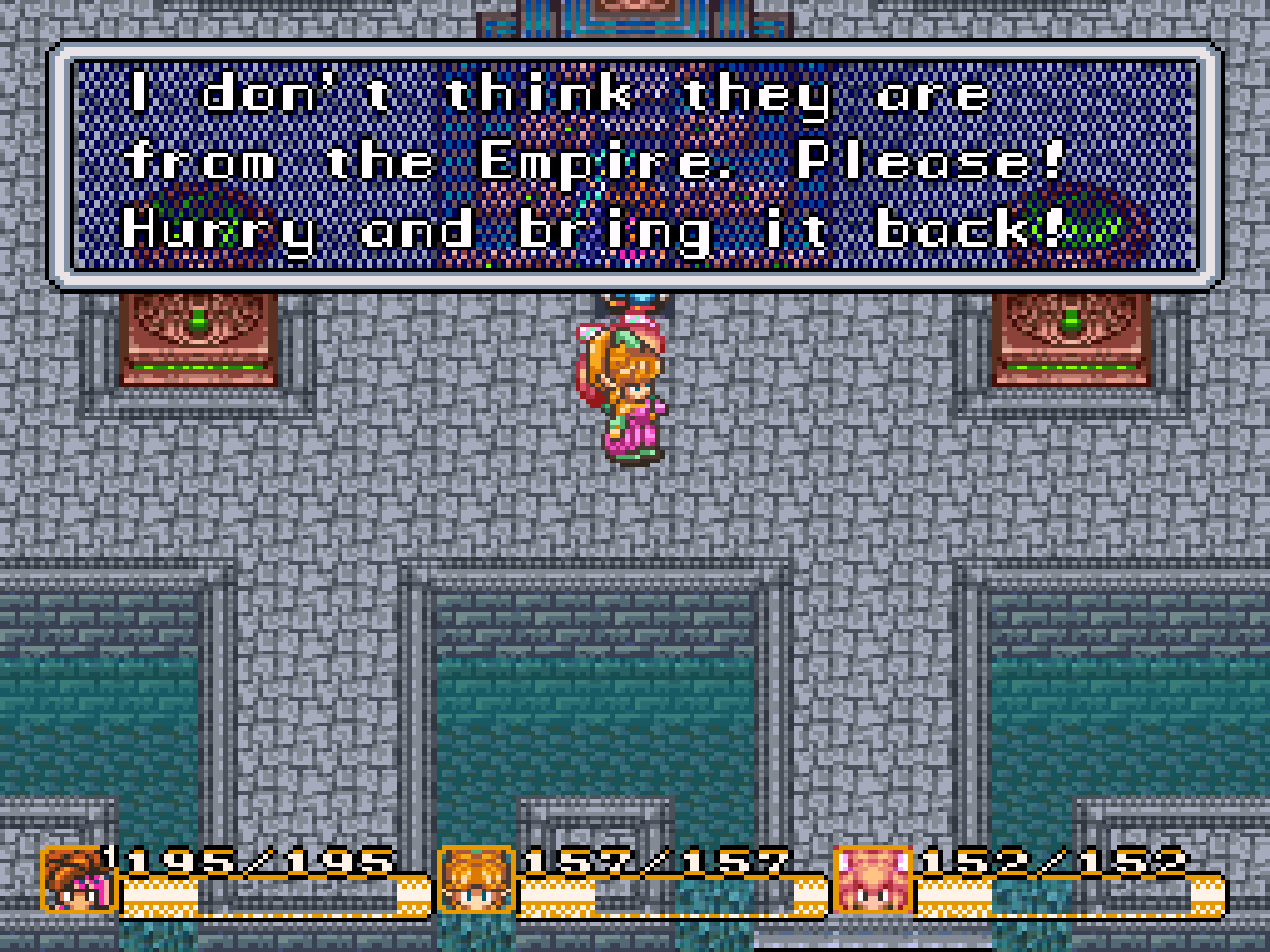 We take another cannon into Gaia's Navel, and head to the Underground Palace...

I just hope that my suspicions aren't correct...

I save before heading down the entrance. 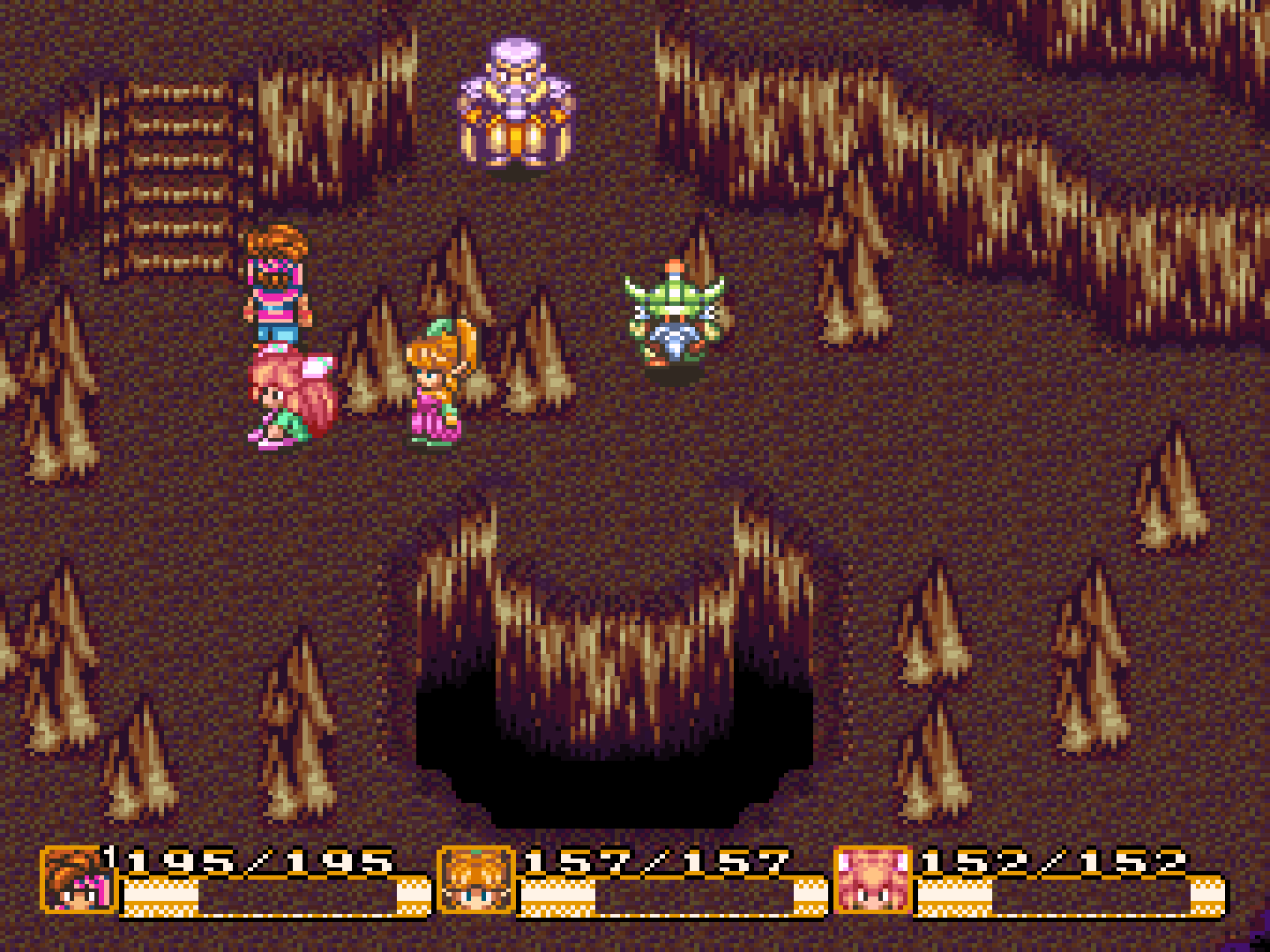 Hmmm...why are Jema and the Elder there?

The Elder mentions the very big hole in the middle of the ground. Jema also implies the thieves of the Water Mana Seed are also planning to steal the Earth Mana Seed. He decides to head them off by going to the Underground Palace.

We chase the thieves down the big hole!

Well, the music and the scenery's new...it looks like we stumbled upon what looks like the Fire Ship, or an airship! 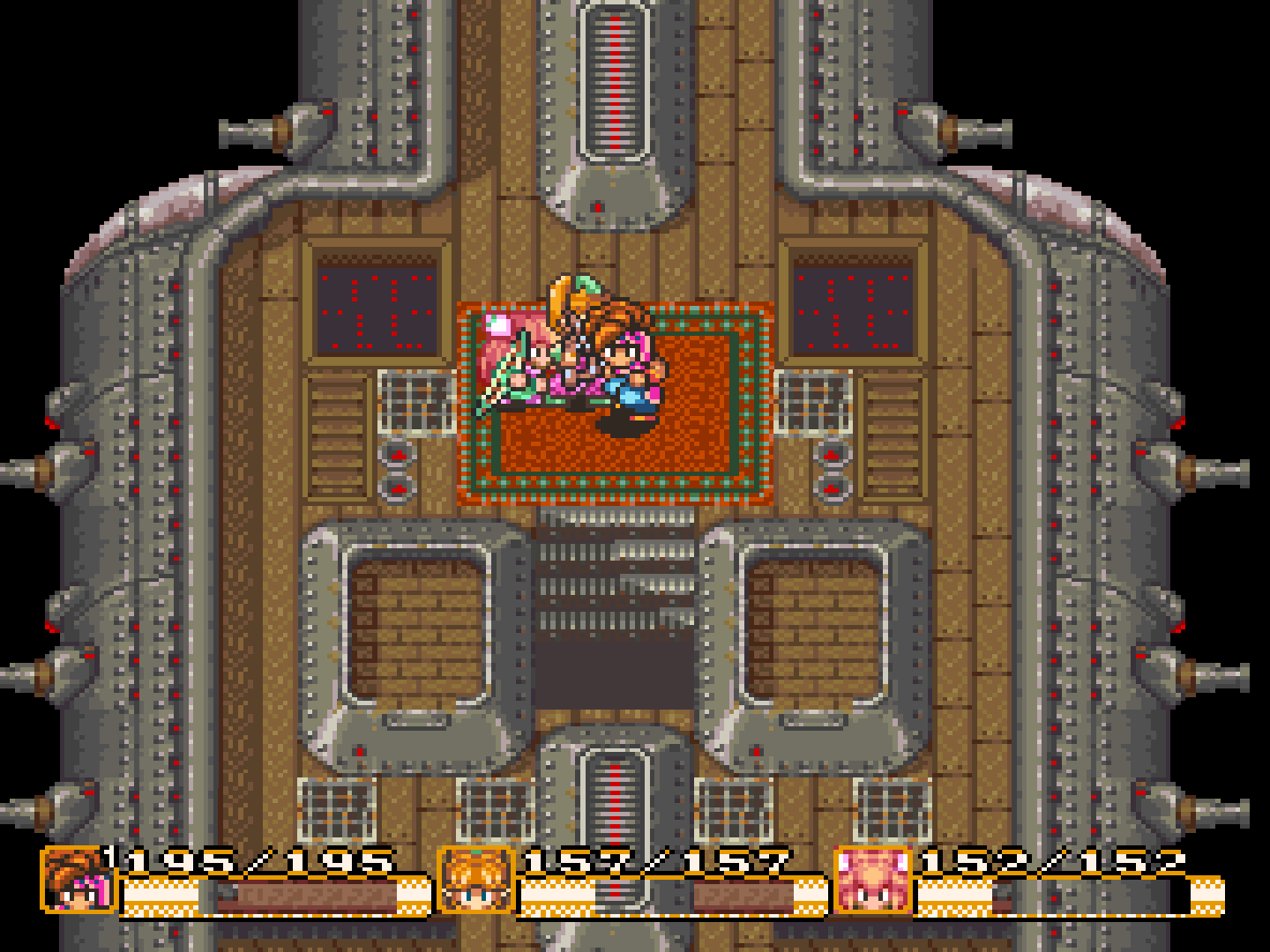 We climb down the steps...

In a corner of the hall, we get a Whip's Orb! 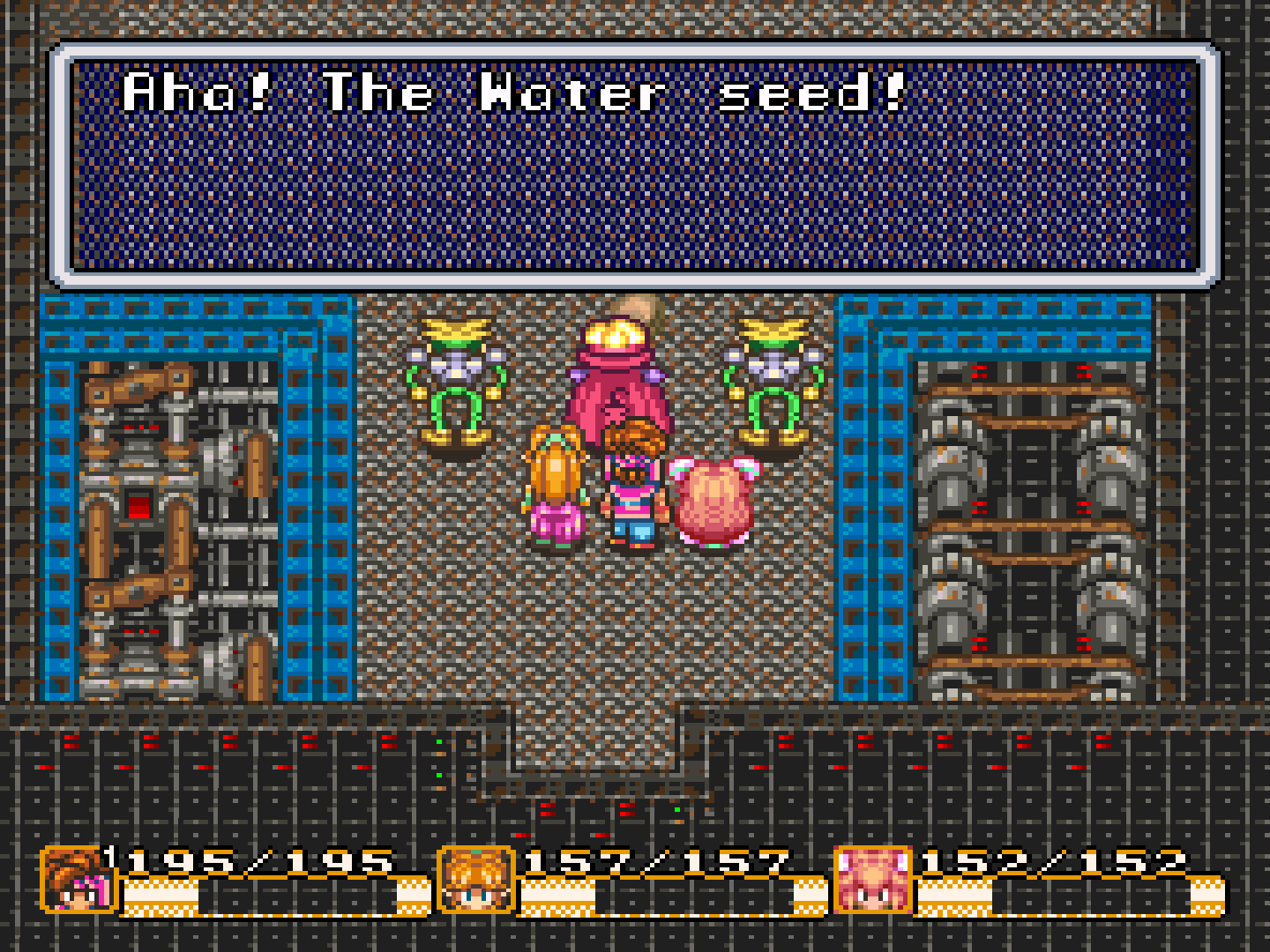 ...and we finally catch our thieves!

But the thieves spot us, telling us we can't leave now!

Their leader turns around and speaks to us. 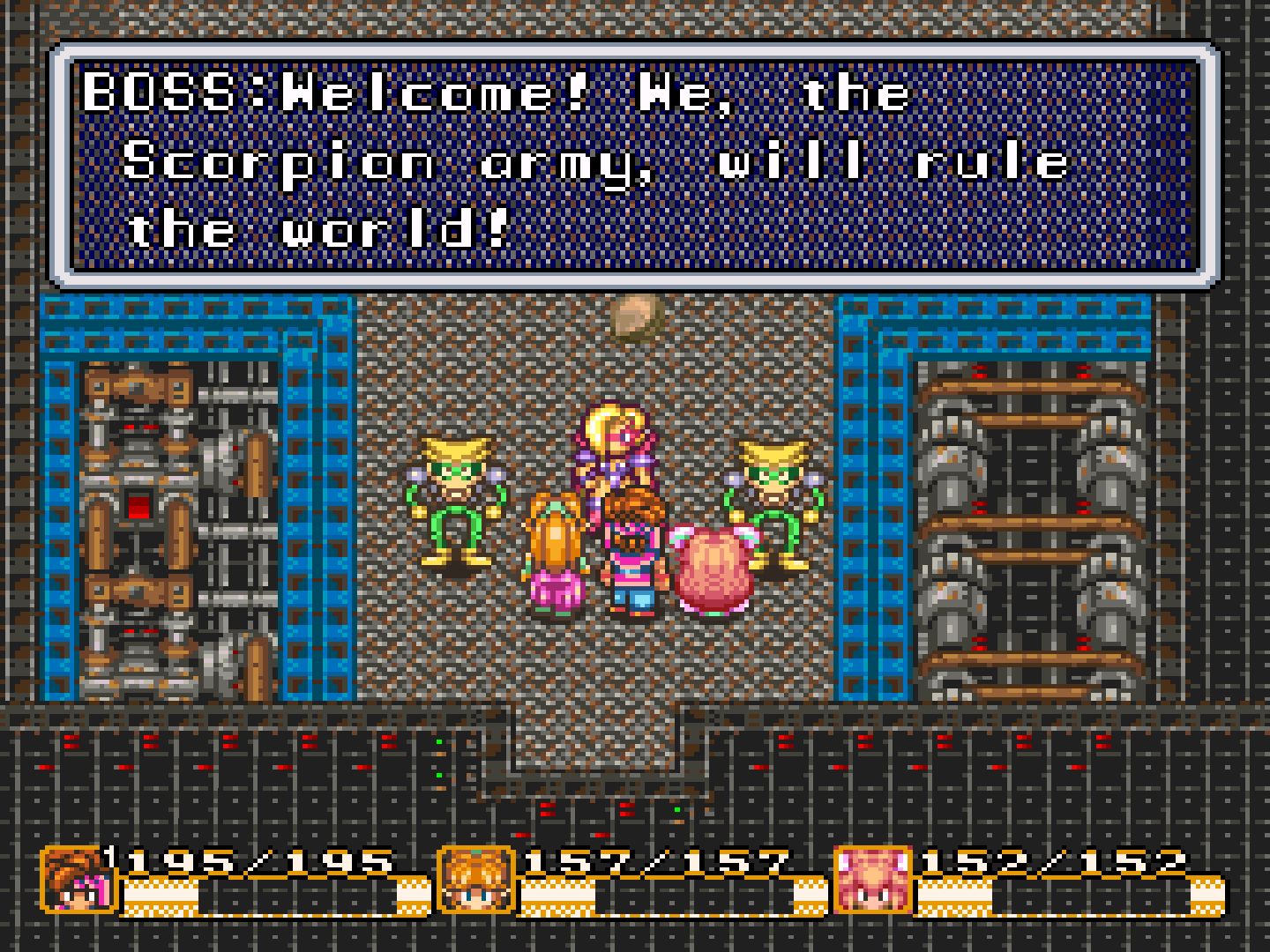 The Scorpion Army? So they're not with the Empire... but are probably a group of pirates!

The Boss admits that they took the Water Seed... 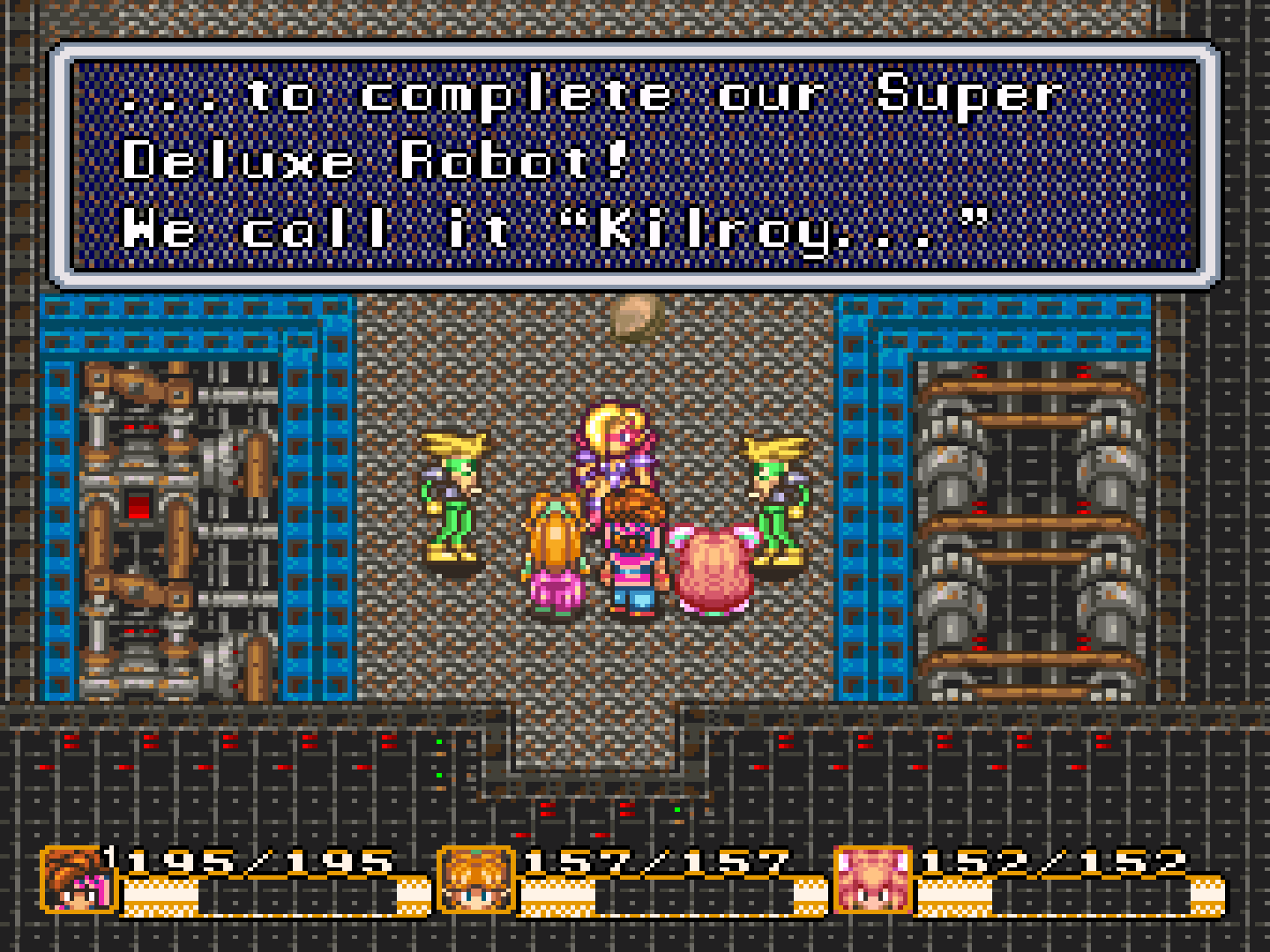 ...just for a giant robot called "Kilroy"!? The Boss orders his minions to turn on the giant robot!

They leave for the next room where the robot is...

We try turning back, but it seems we can't leave the ship until we finish off the Scorpion Army's giant robot... 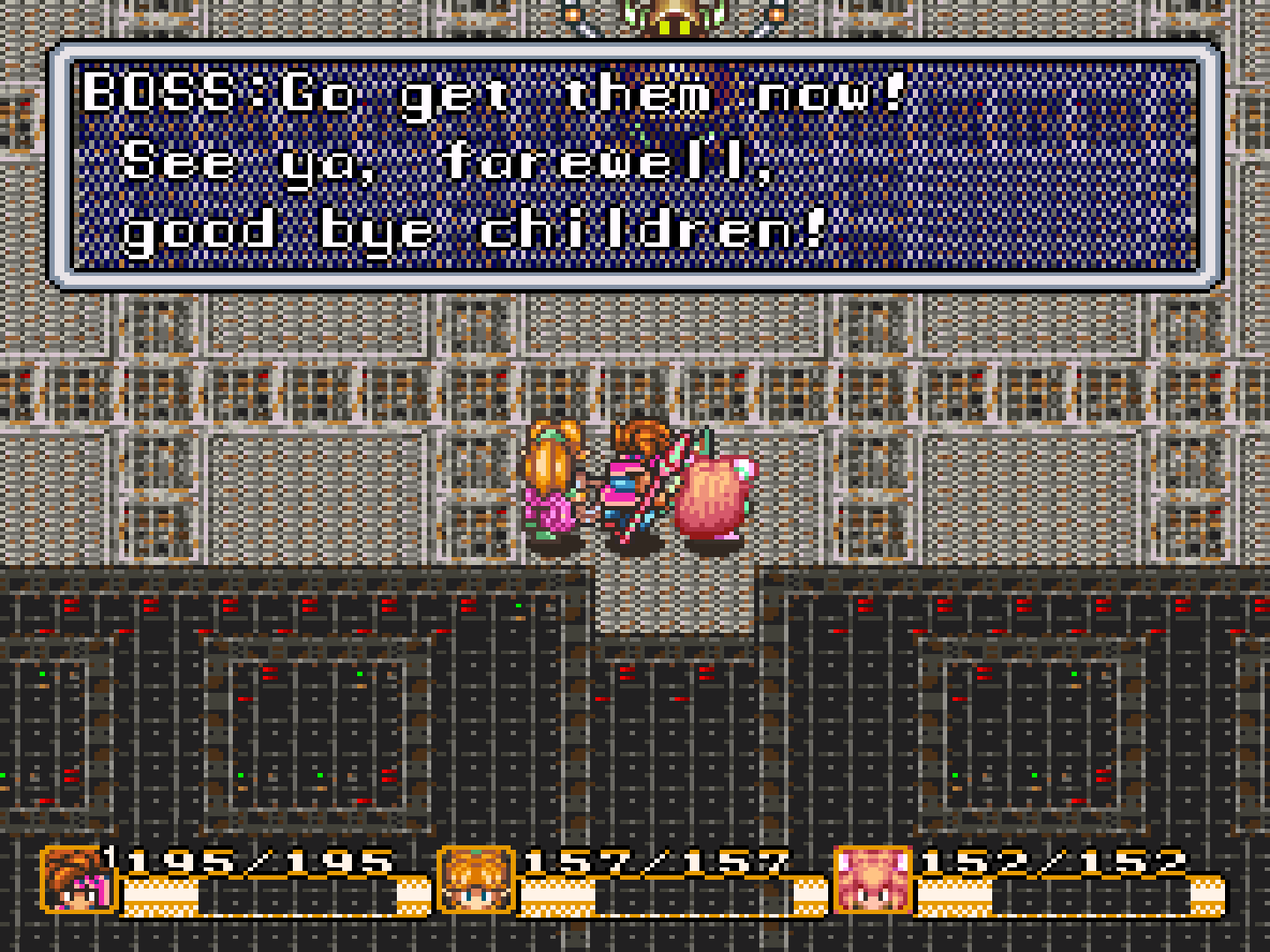 The robot is now out of the Army's control!

The boss orders them to remove the Mana Seed, but it's no good...

I have Max cast every offense spell in his arsenal at the robot!

The Earth Slide seems to work better against Kilroy...

I have the party run circles around him trying to get away from his range while I have Max and Pidge cast their magic!

But Kilroy uses his hammer to turn Pidge into a moogle!

Every time Kilroy gets hit, he somehow changes weaknesses, I think...

One more Freeze spell, and the fireworks happen! 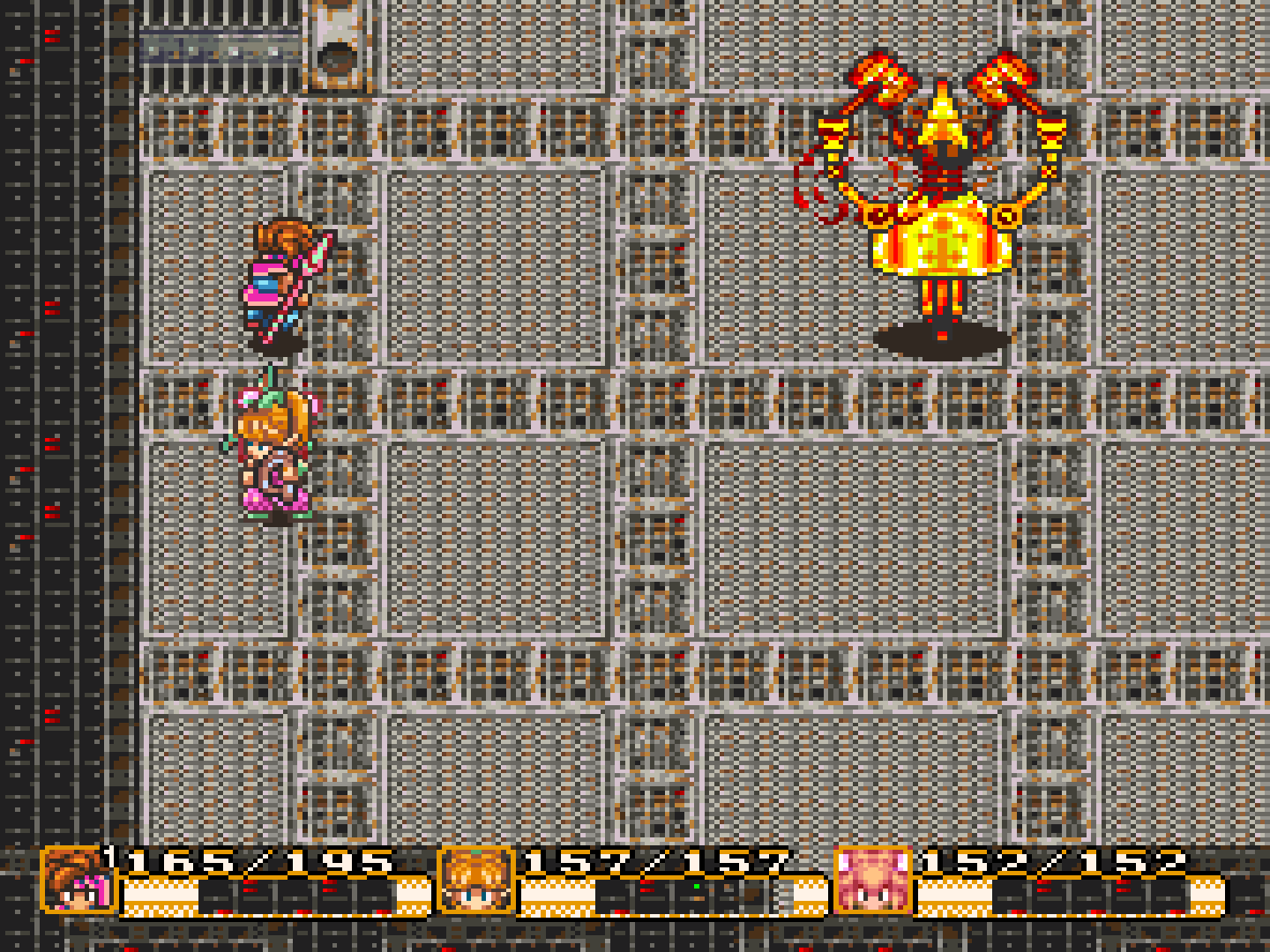 We get a Javelin's Orb!

Knowing that they're finished, the Scorpion Army's boss gives us a "seeyalaterbye" as they run away!

We get back the Mana Seed!

Back at the village, the Elder points out how older Hero (or the party?) looks, and tells us Jema went off with soldiers from Pandora.

I head to Watts to upgrade the Whip and Pole Dart...

...which become the Black Whip and Javelin! 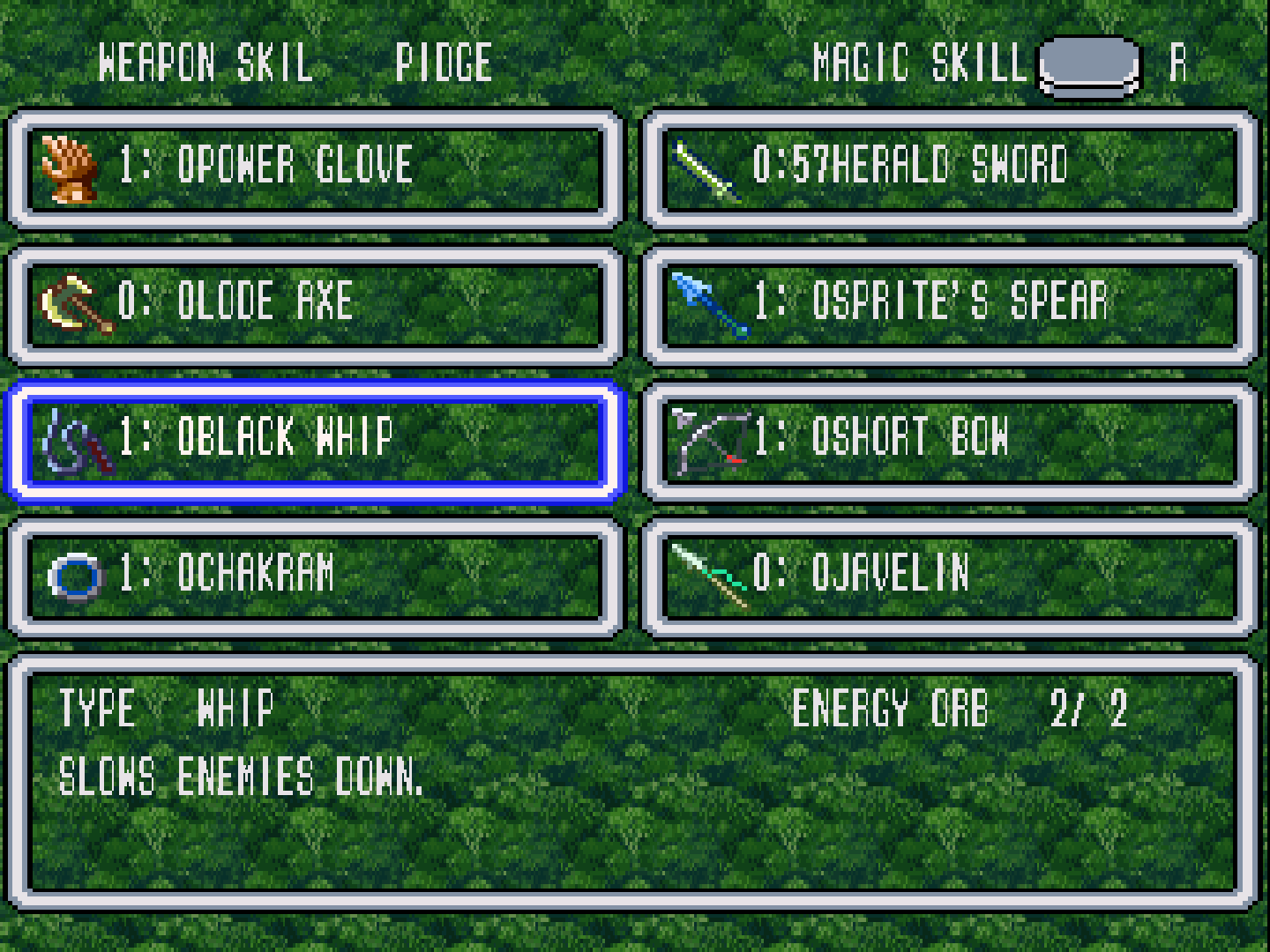 Afterwards, I equip Pidge with the Sword and rest-and-save!

I'm a bit puzzled now. Just who is the Scorpion Army?

They're not affiliated with the Empire as Luka said, but are they more than just a band of pirates? Are they going to play an even more important role later in the game? Because that whole event felt like they came out of nowhere...