None of the soldiers walking around can't speak to us. More of Elinee's work...

With the party's entire weight on the switchpad, the bridge is revealed!

After taking care of an Eye Spy, we're now in a room with two staircases just like in the first floor...

Except the end has three doors instead of two heading somewhere... 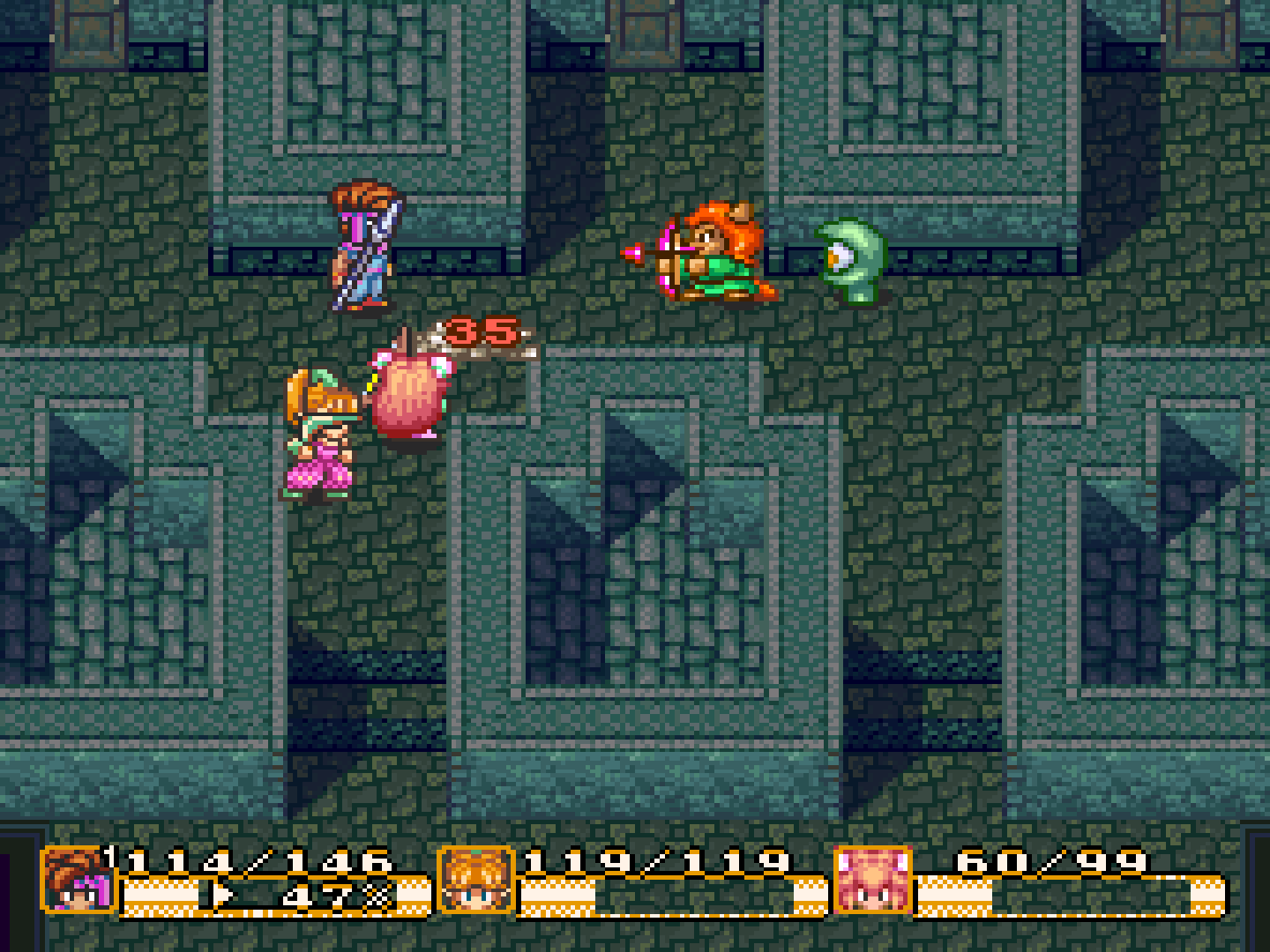 Now which door to take? No hints so far...I wonder if the rooms are randomized so that each room's different to another player who’s played through this game?

After taking the west door, and running into three bat monsters, we go back and take the center door.

With another Eye Spy quickly taken care of, Hero presses another button moving a wall out of the way...

Past the doorway now, and by the bookshelves, it seems we've entered the Witch's Lair. 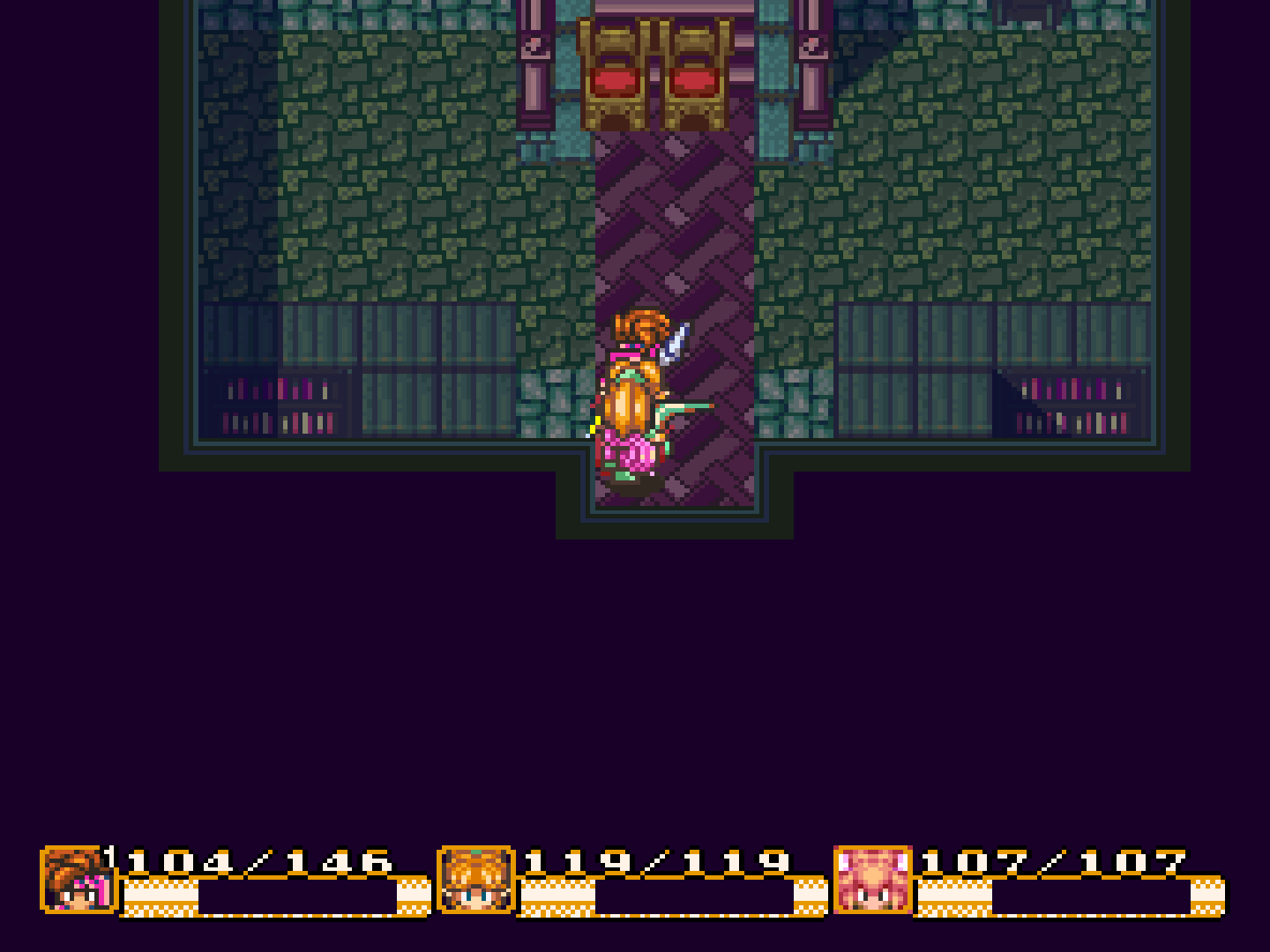 The music's now playing a remix of the battle theme, "Into the Thick of It." It's exhilarating, yet more ominous...

We take care of the Polter Chairs blocking the staircase, and we meet Elinee. 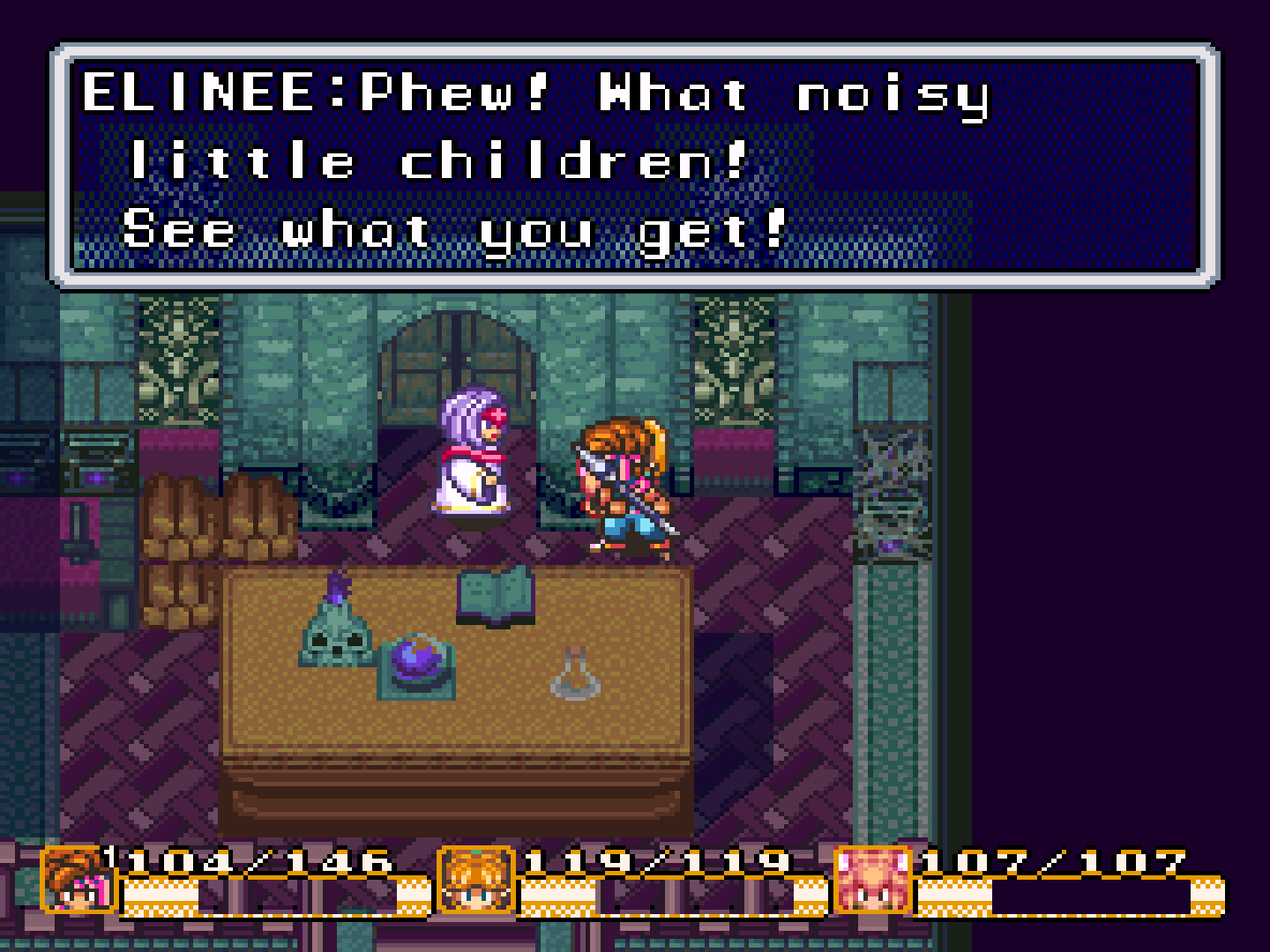 She runs off to the next doorway...

She's now in front of Major Dyluck. What is she doing? 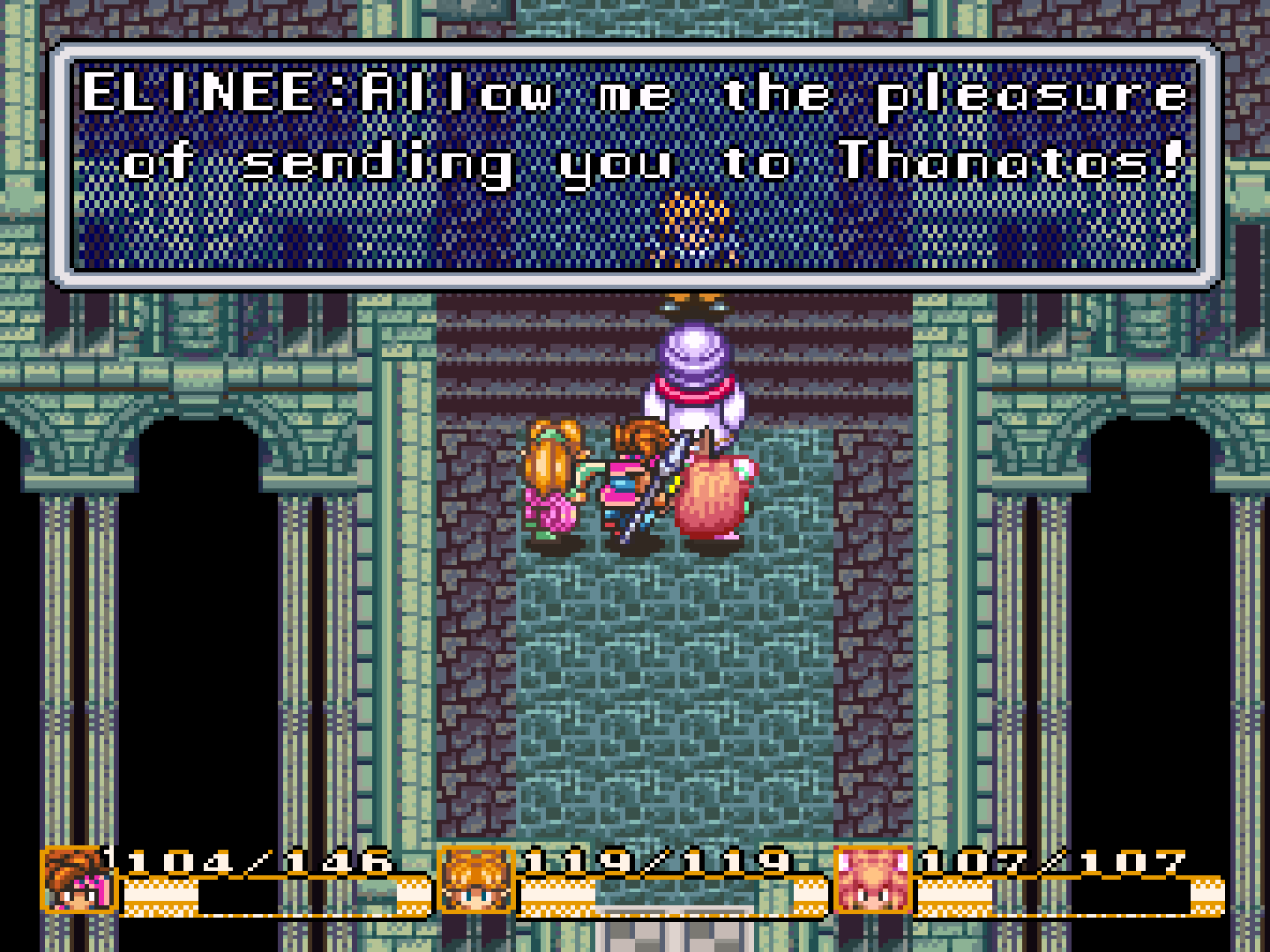 Instead, she makes the Major vanish!

Pidge is not happy. Elinee tells her he just sent him into the ruins south of Pandora, since he's strong enough to resist Elinee's magic, and that this Thanatos person wants him...

Elinee explains who or what Thanatos is. 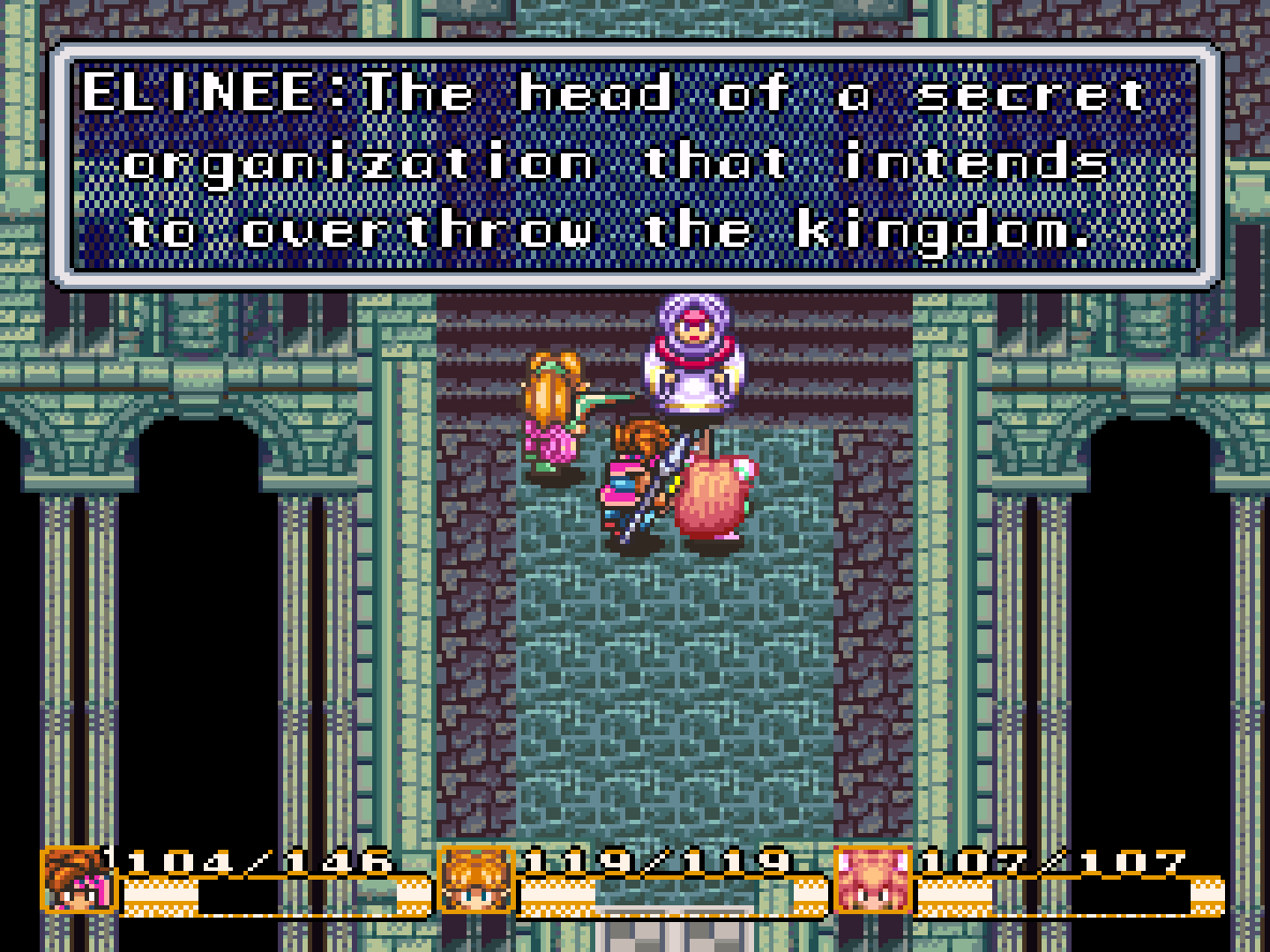 Oh my god...could this Thanatos person be working for the Empire?

But Elinee tells us we're too late. 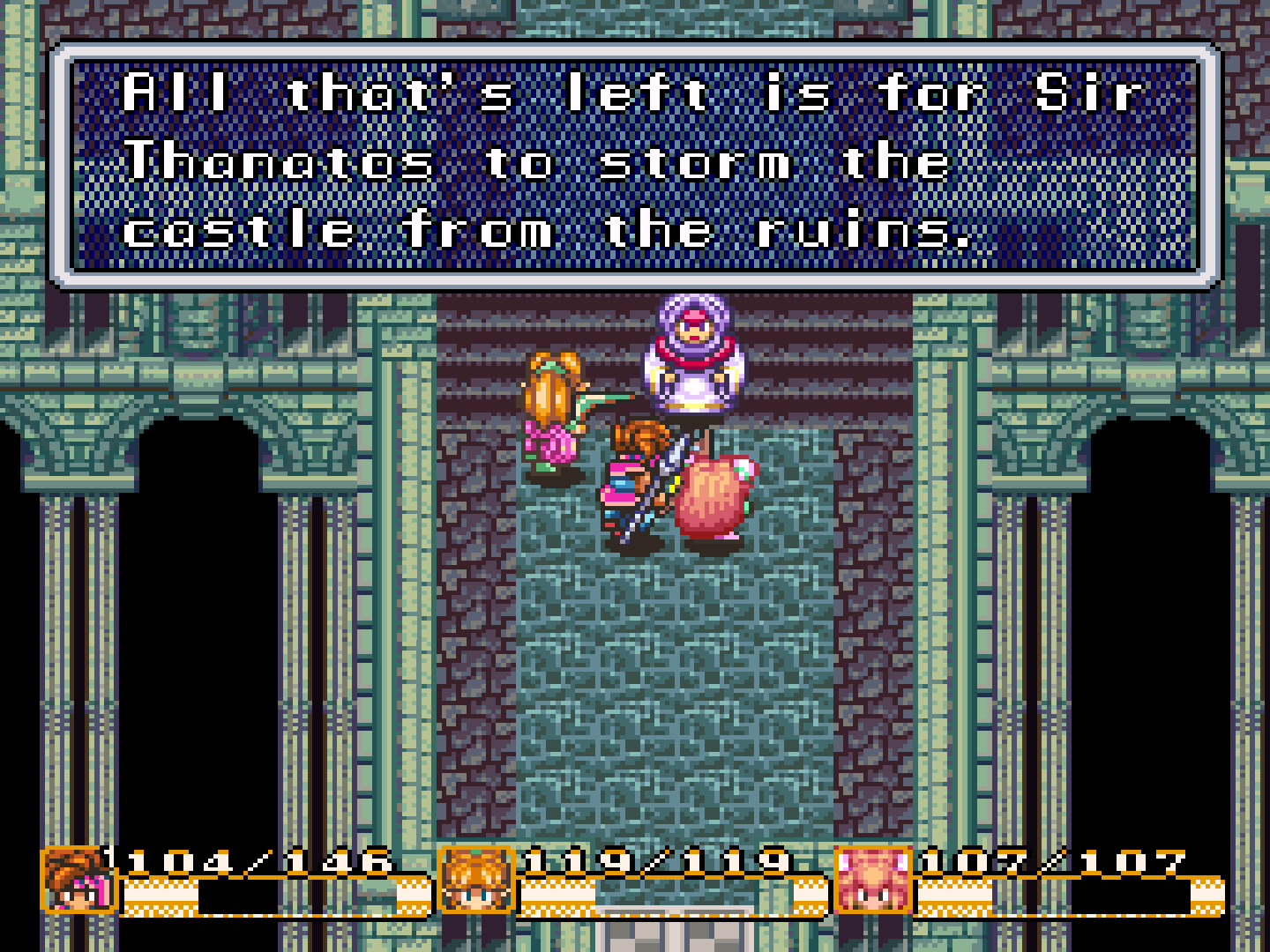 The gates open, and Spikey quickly rolls out of the pen, leaving Max and Hero unconscious!

Spikey’s a tiger, or a Spikey Tiger! 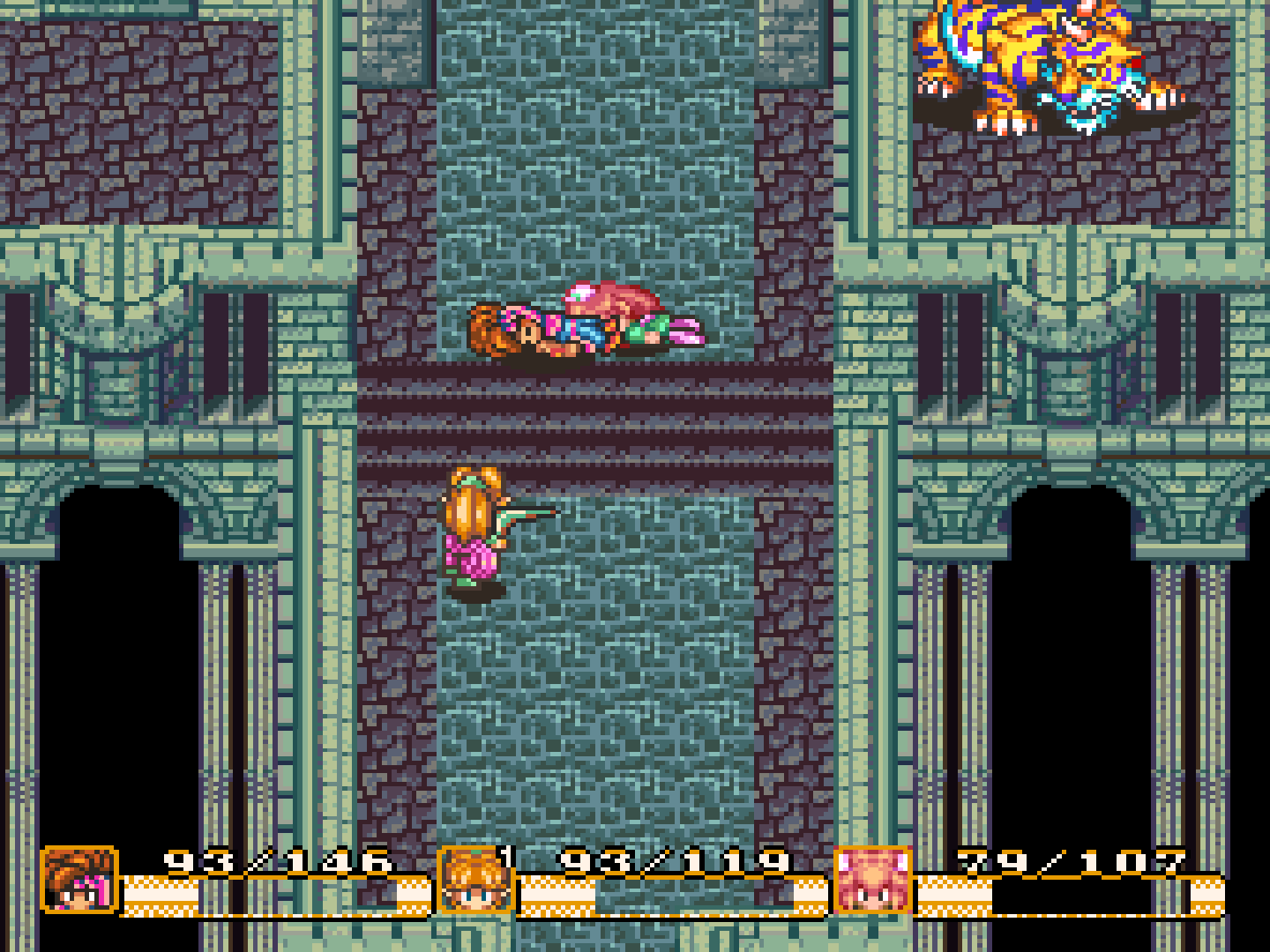 Spikey’s now on the prowl...

I switch to Pidge!

Now, how to take care of this monster...

When he's in the middle, he can be attacked, but when he rolls into a ball, he's unstoppable!

When he leaps and rolls, the shaking caused by Spikey's landing stops the whole party!

I adjust tactics to ensure everyone stays away from Spikey, but to continue attacking him from a distance!

Lucky I can douse anyone who's been burnt by Spikey's fiery breath with a Magical Herb!

Spikey also drops a Fire Bouquet on Max, which decreases his attack!

I have Hero reequip the Sword.

He starts his rollout attacks again...nearly taking care of Max, and knocking him and Hero out temporarily!

But they get up and we take Spikey out! 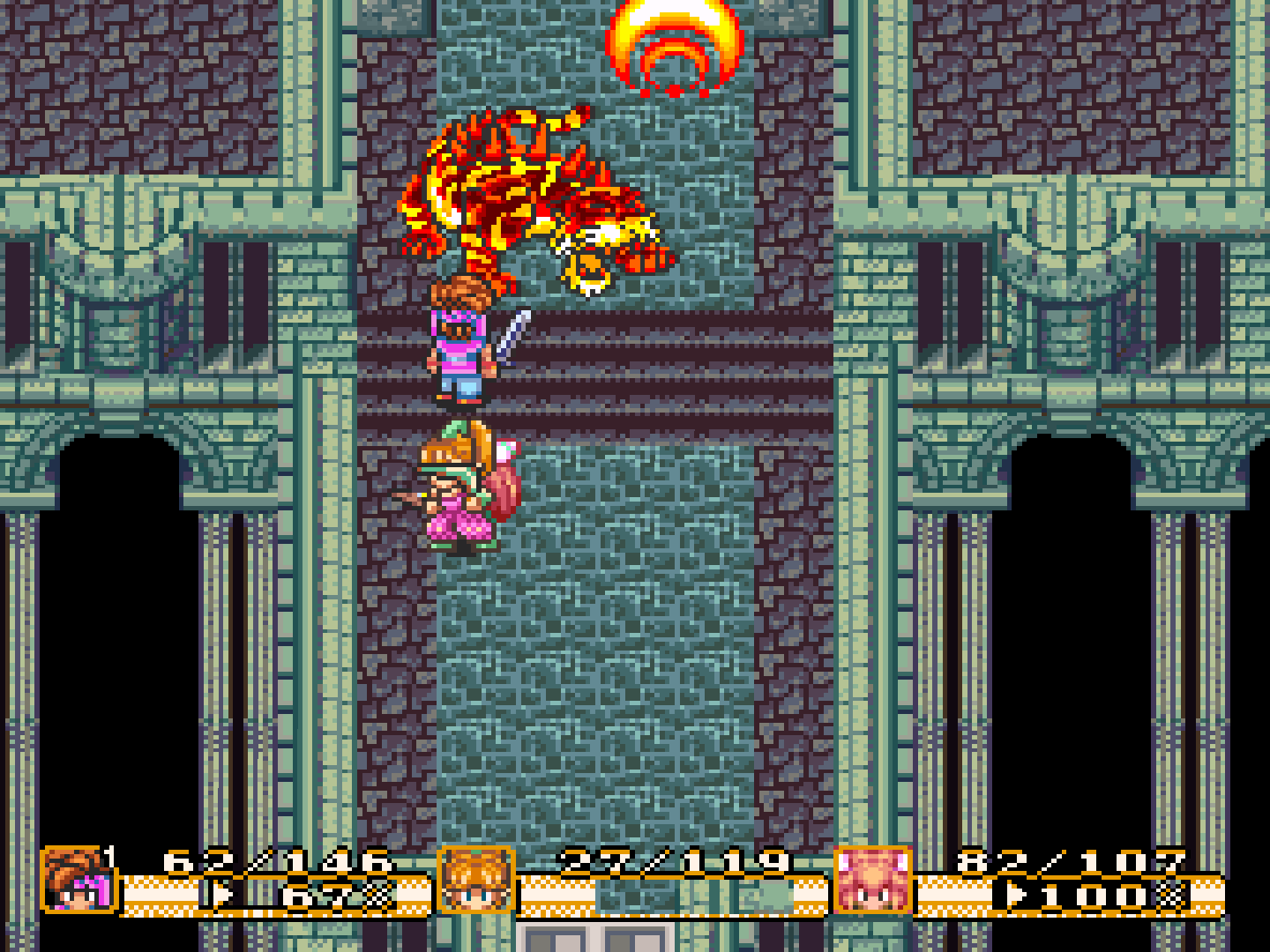 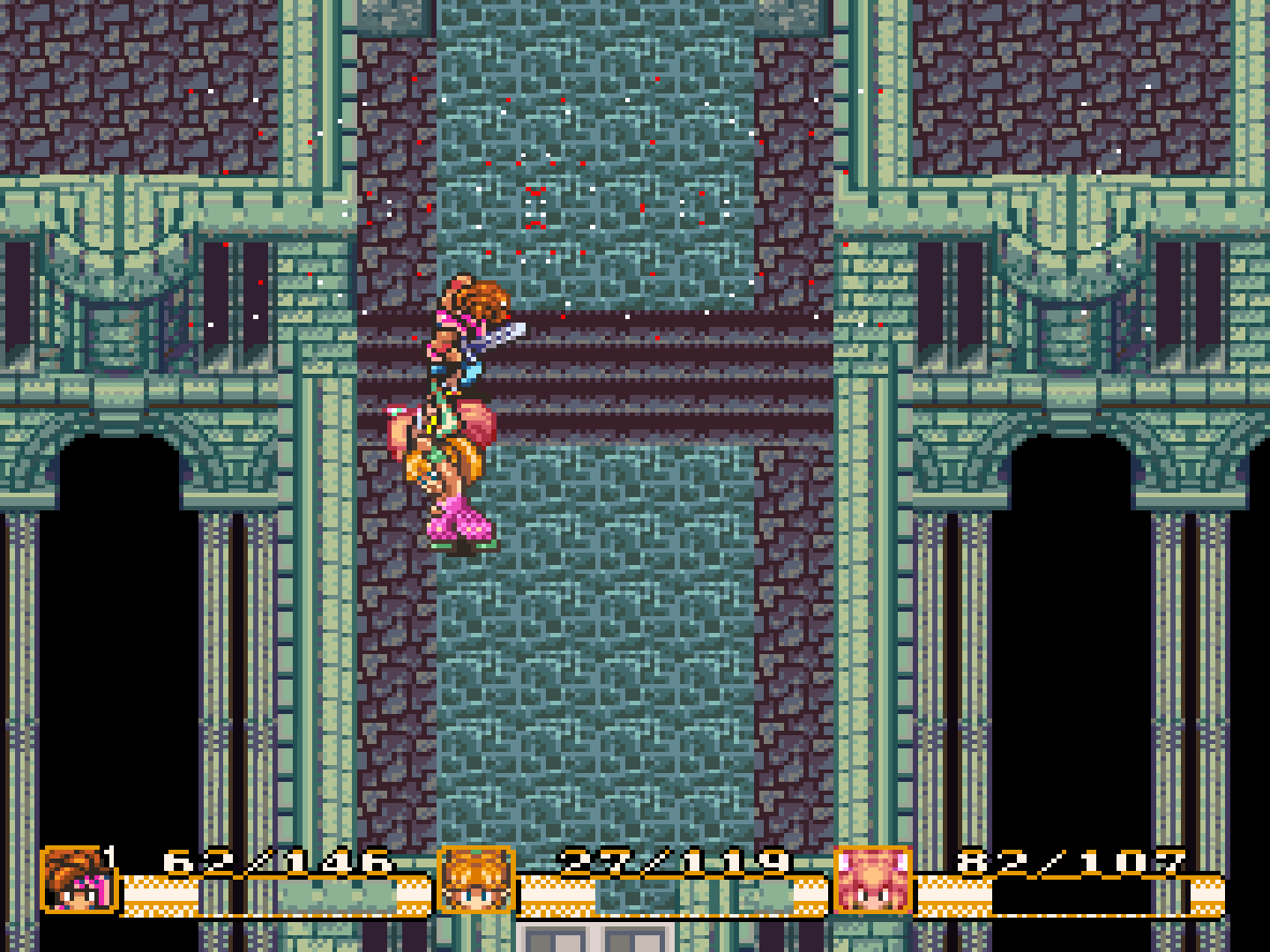 We get a Boomerang Orb!

The music changes into joyful celebration!

We head back down, where the witch is! 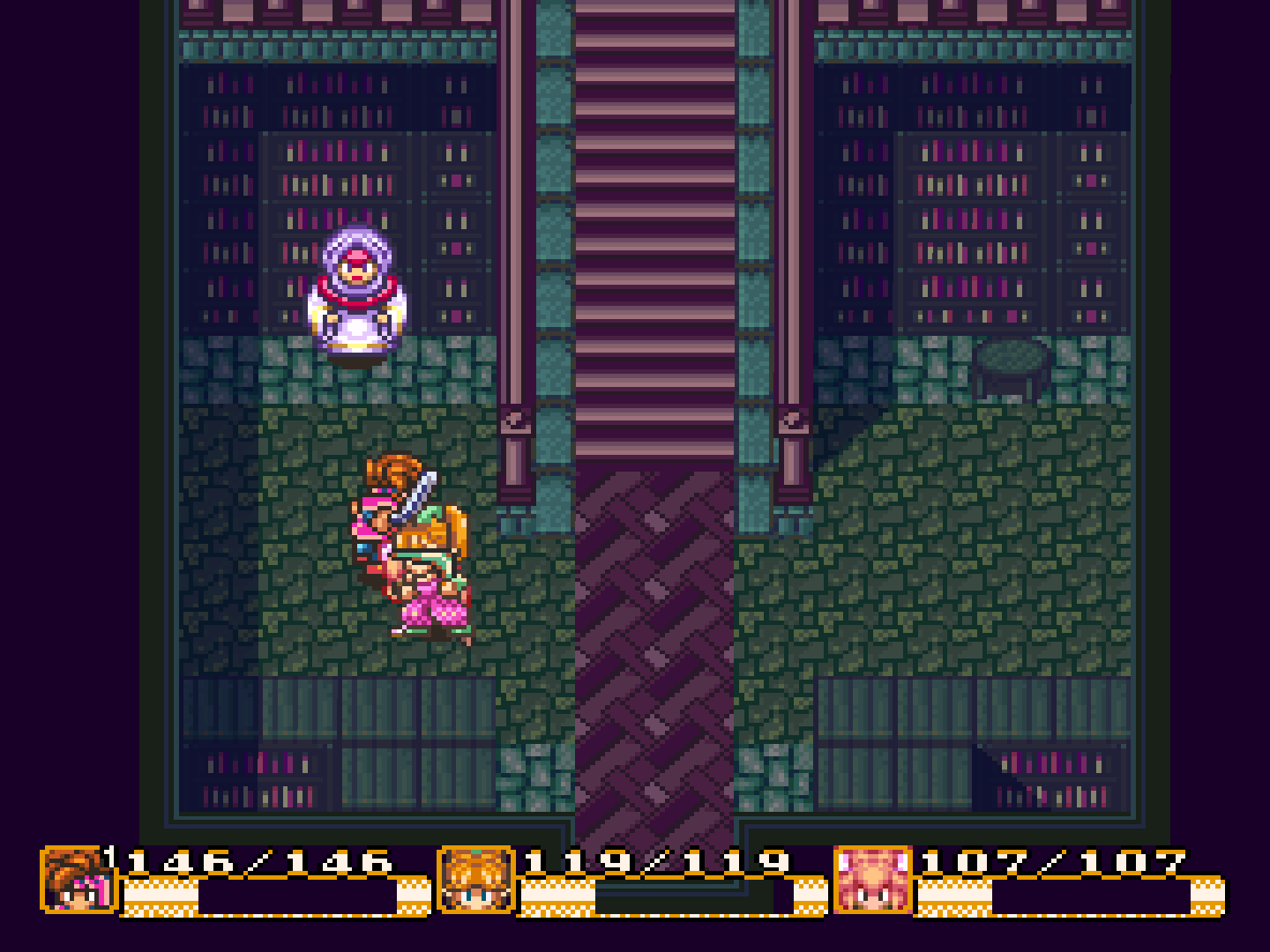 Elinee shrieks in surprise and begs us to forgive her. She transforms into a...smaller, less intimidating appearance... 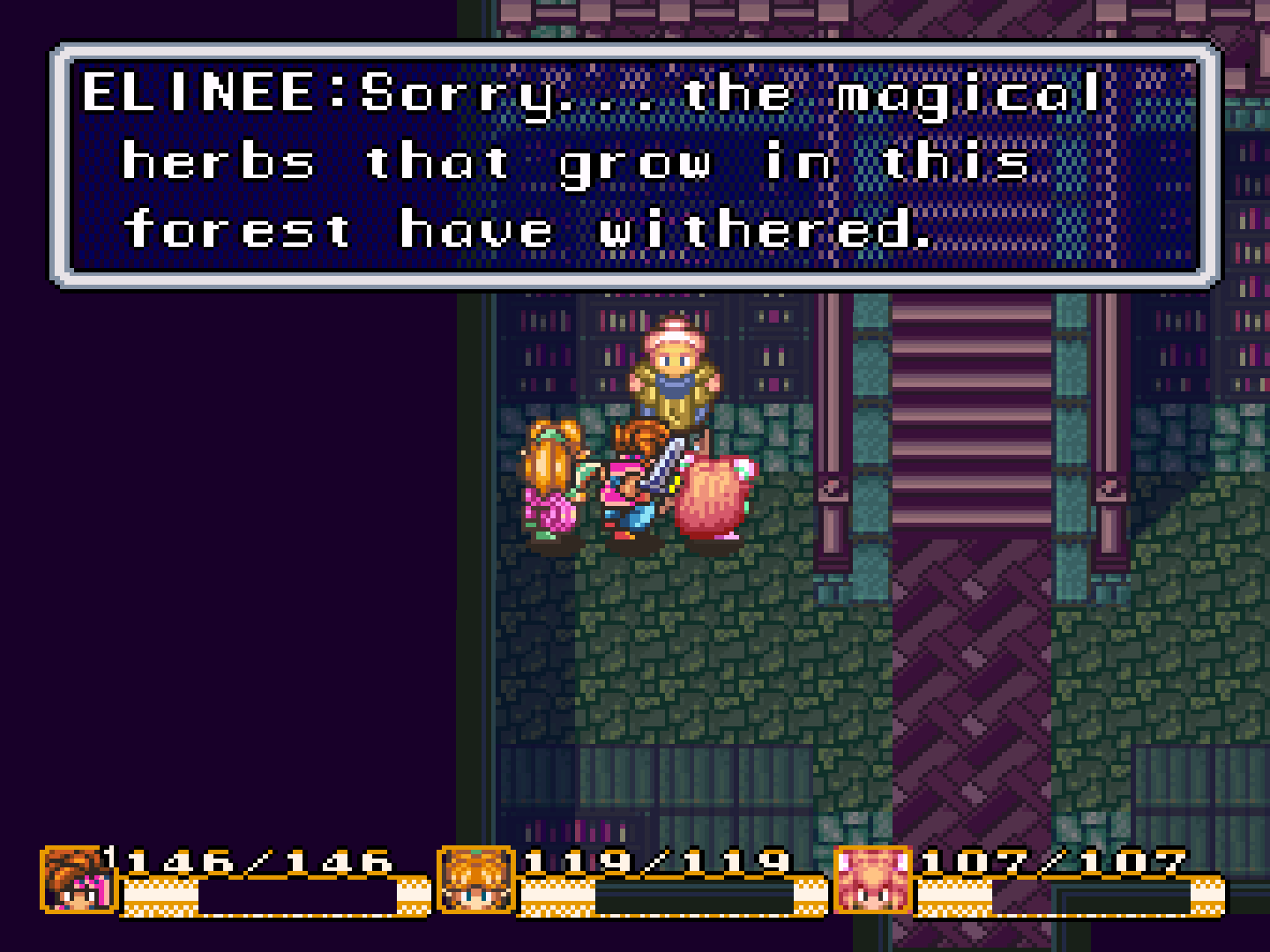 Because of the lack of herbs in the forest, Elinee notes that she's been trading Pandora's townsfolk for herbs from Thanatos!

So it was Thanatos's doing that caused Elinee to turn evil...

She decides to "live peacefully" as a "normal, elderly lady" from now on.

Elinee calls Major Dyluck "that other kid," telling us that the Major's in the ruins.

She hands us more treasures from the chests east of the room, and a tip to get to the Underground Palace: to get there, we need ice magic.

Elinee's lost her magic powers now and can't teach us (or Pidge or Max) any ice magic...

Now that we have the Whip, we can leave the forest easily!

The castle's monsters have vanished as well!

We buy more stuff and save before leaving the castle.

Outside, Pidge yells that Dyluck is still alive, accompanied with pretty music. 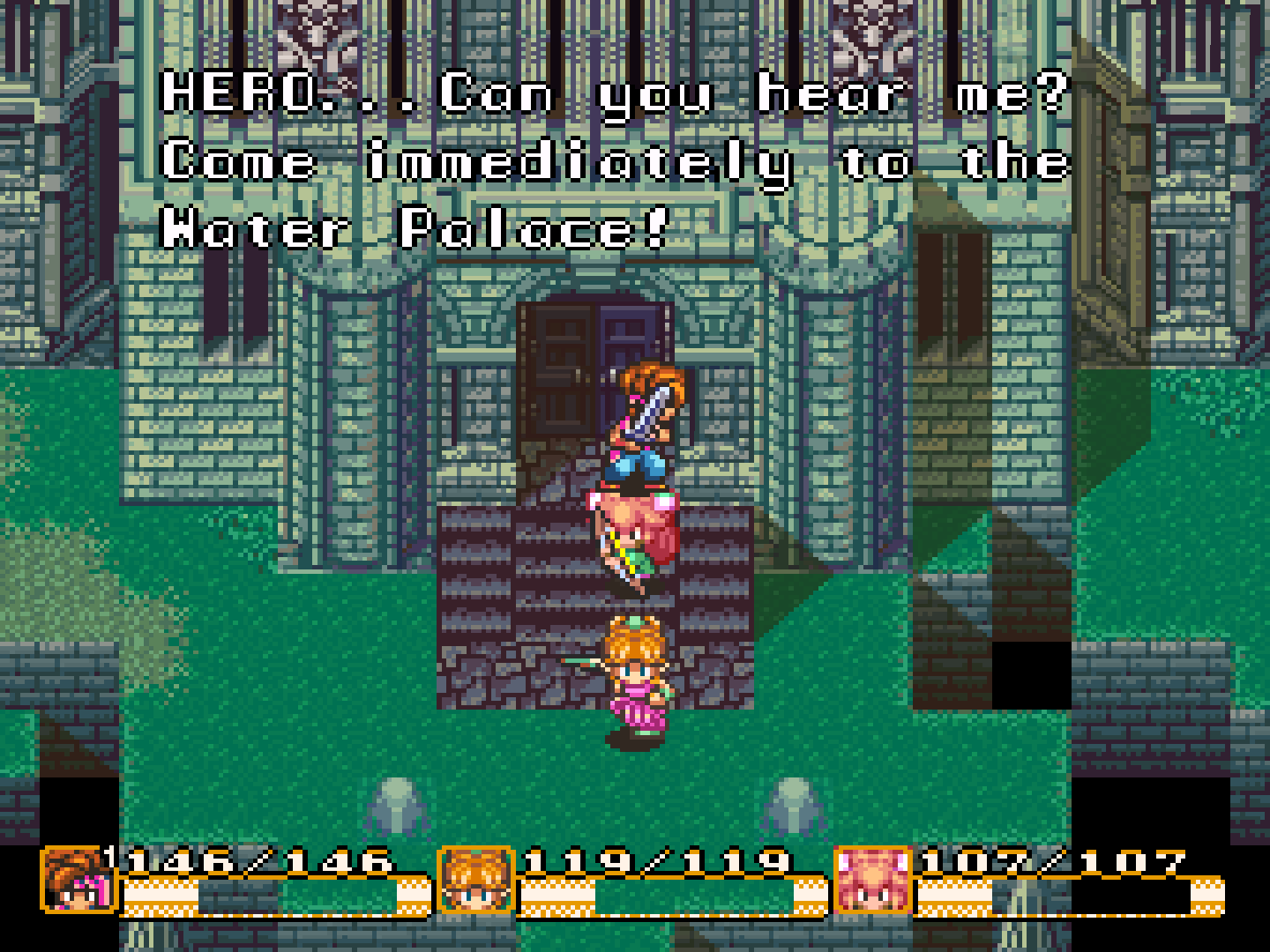 Pidge decides to join Hero, to accompany him to rescue the Major. Max also officially joins in our quest!

Traveling back, I use the Magic Rope next to the poles to get to the portal leading to the Water Palace.

Instead, it takes us back to the portal from Elinee’s castle.

We make it back again and I have Hero use the Whip instead... 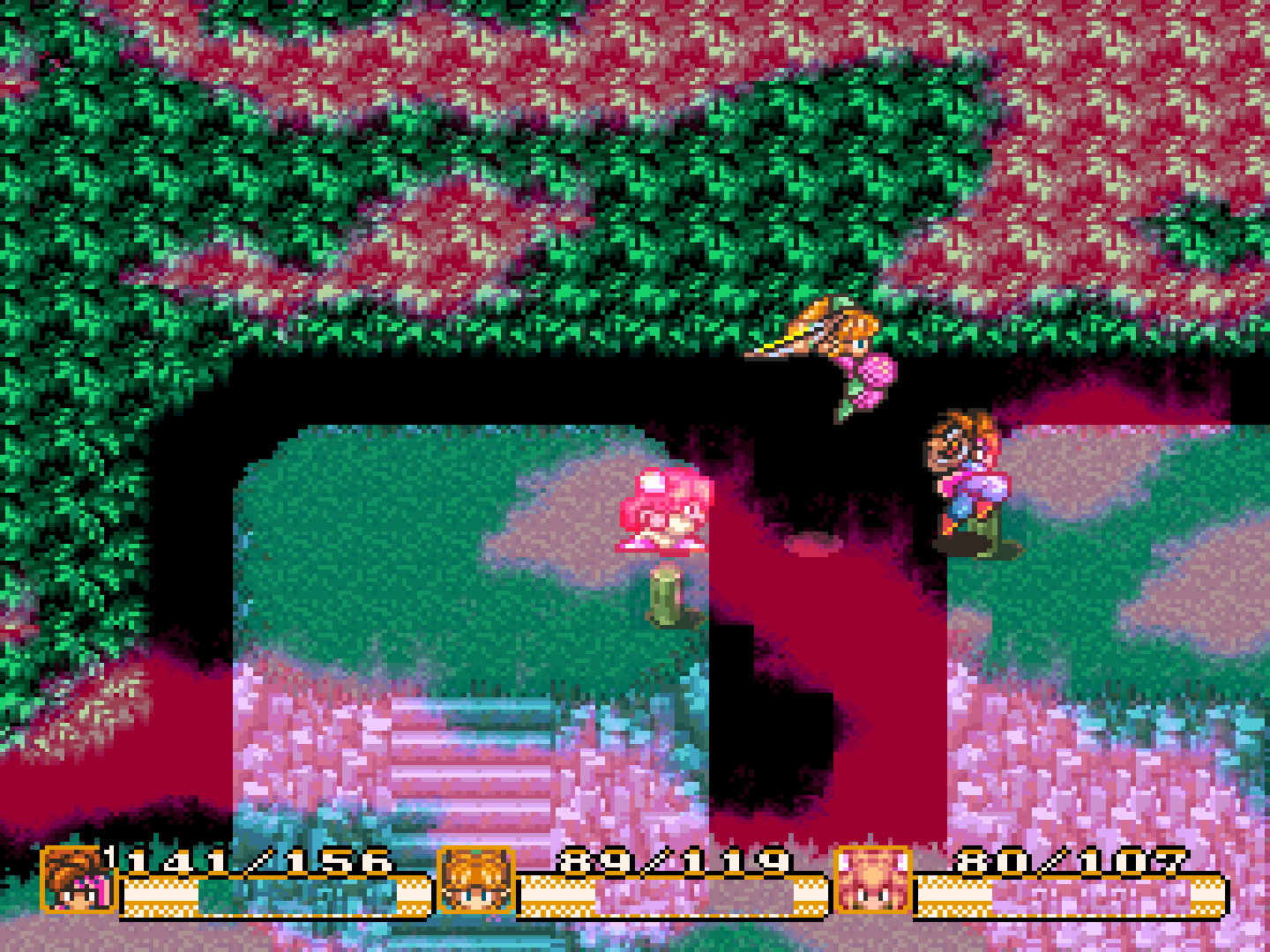 A hop and a skip away!

This Whip has quite a reach!

We save at Neko's inn, who's made it back to his front desk! I wonder how he makes it from place to place so quickly...