Aside: I checked out the development of Secret of Mana on the wikipedia page, and I found out that this game can be played with two players!

There’s now a tunnel that wasn't there before. I'm guessing this is the way that leads to the Underground Palace. 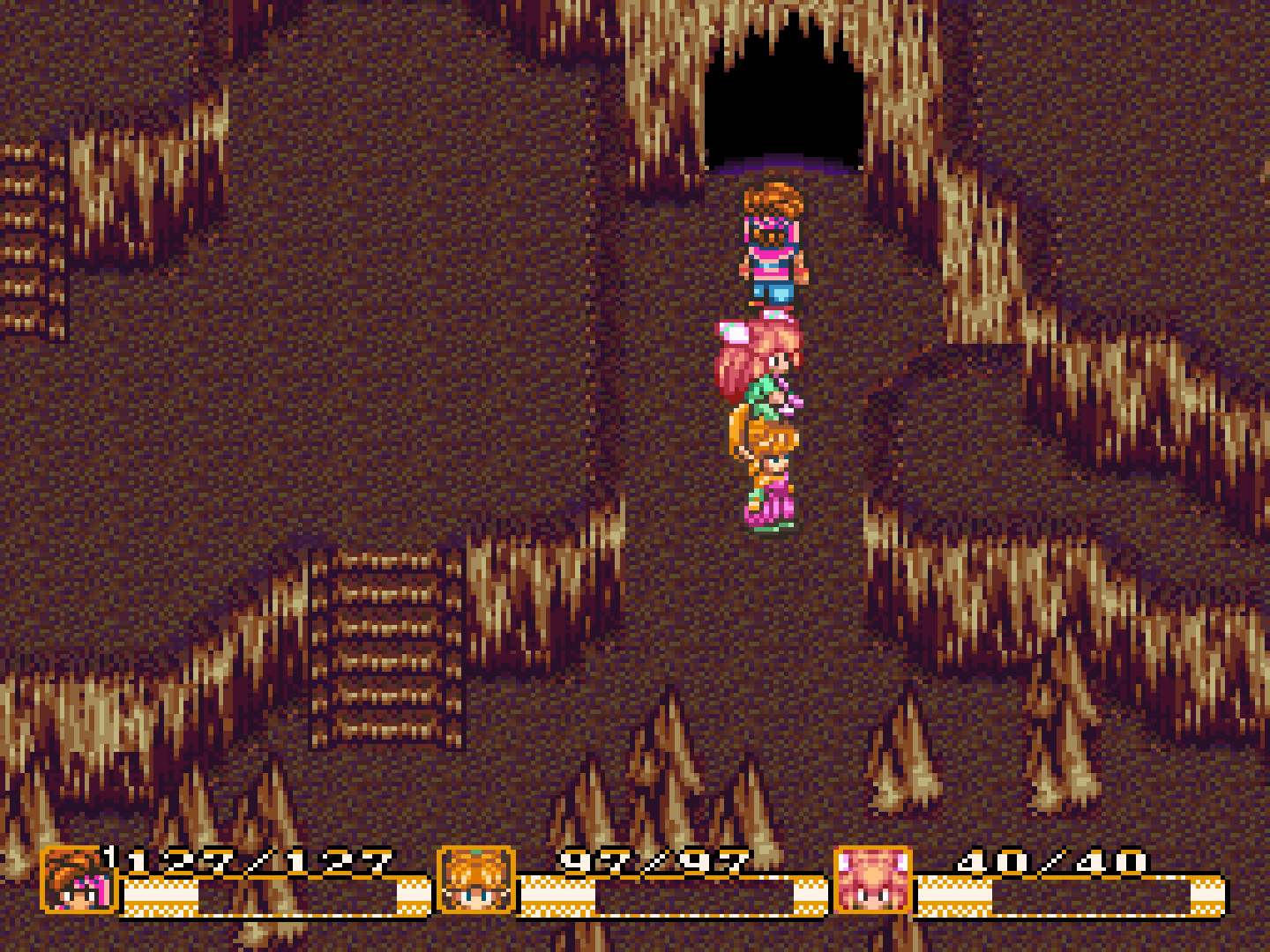 Heading forward, we see a shiny thing on raised land.

We can't cross any further since there’s a river of lava here...

Max is getting pretty strong really fast. It's probably because of the monsters' high XP in the caves here...

We take care of most of the monsters in a jiffy as we make our way back outside...

I decide to take to the eastern tunnel behind the falls.

There's Neko again! I decide to buy more stuff from him and save.

Back outside and to the woods we go!

But then, I suddenly realize that we forgot to get the axe from Watts! Ai yaaaaaa!

On the way back underground, the Lullabud does its trademark sleeping spell for the first time on Hero! 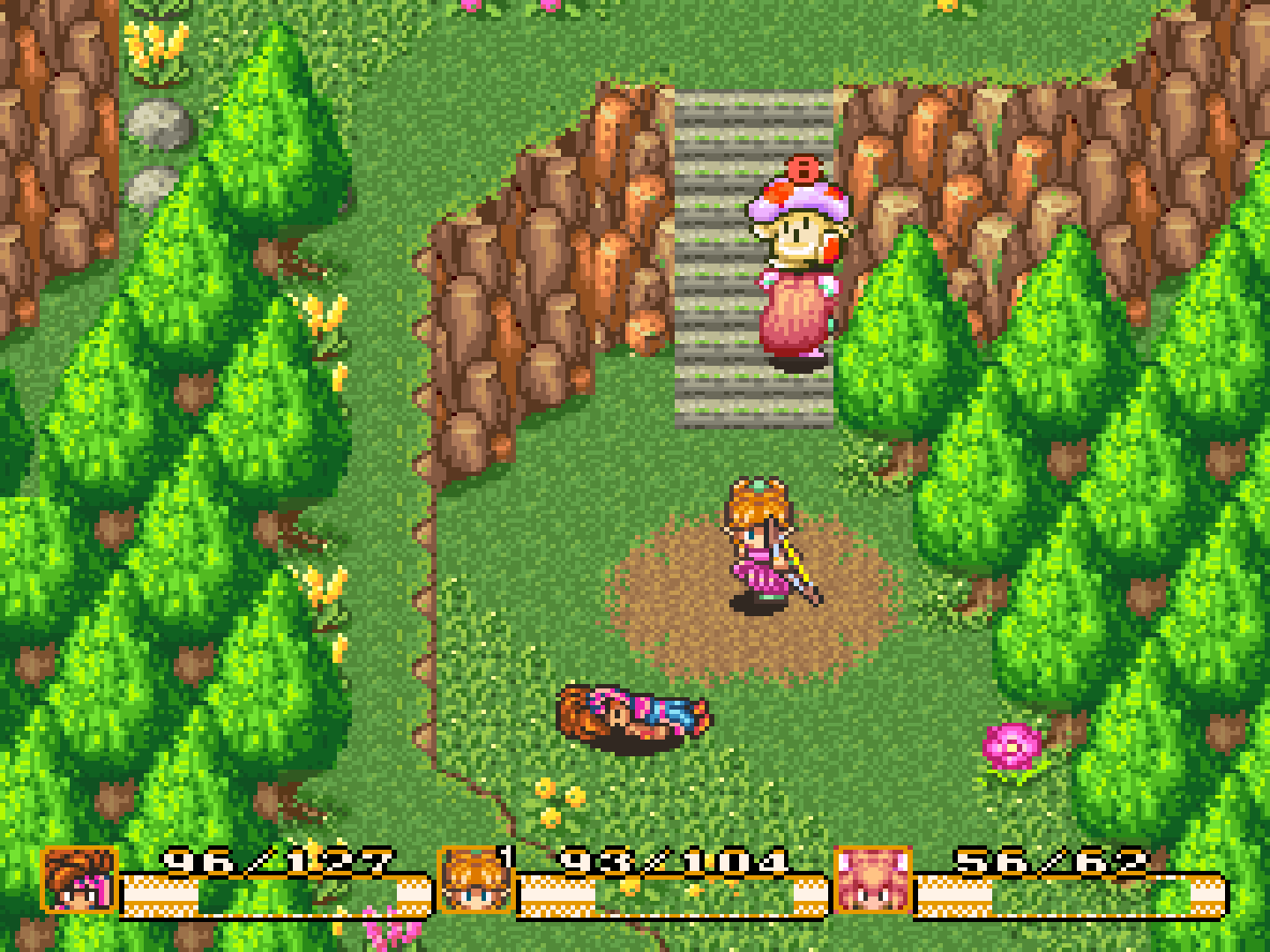 After tons of battling, though they were quick ones, we make it back to Watts, who tells us some bad news. 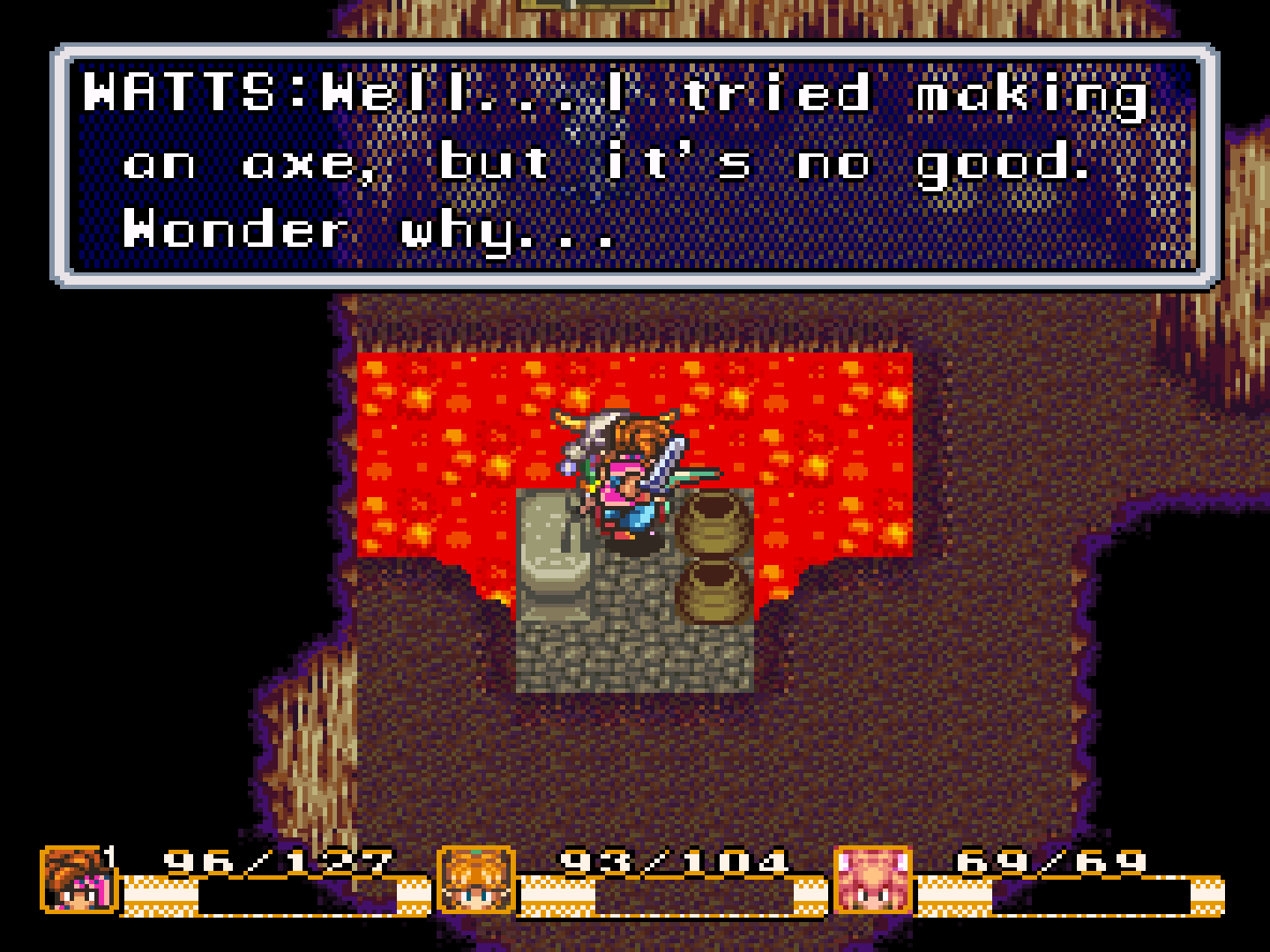 Watts couldn't make the axe, but he notices Max’s boomerang, and asks Hero to hold the axe.

Another glowing light...the axe reacts to us! 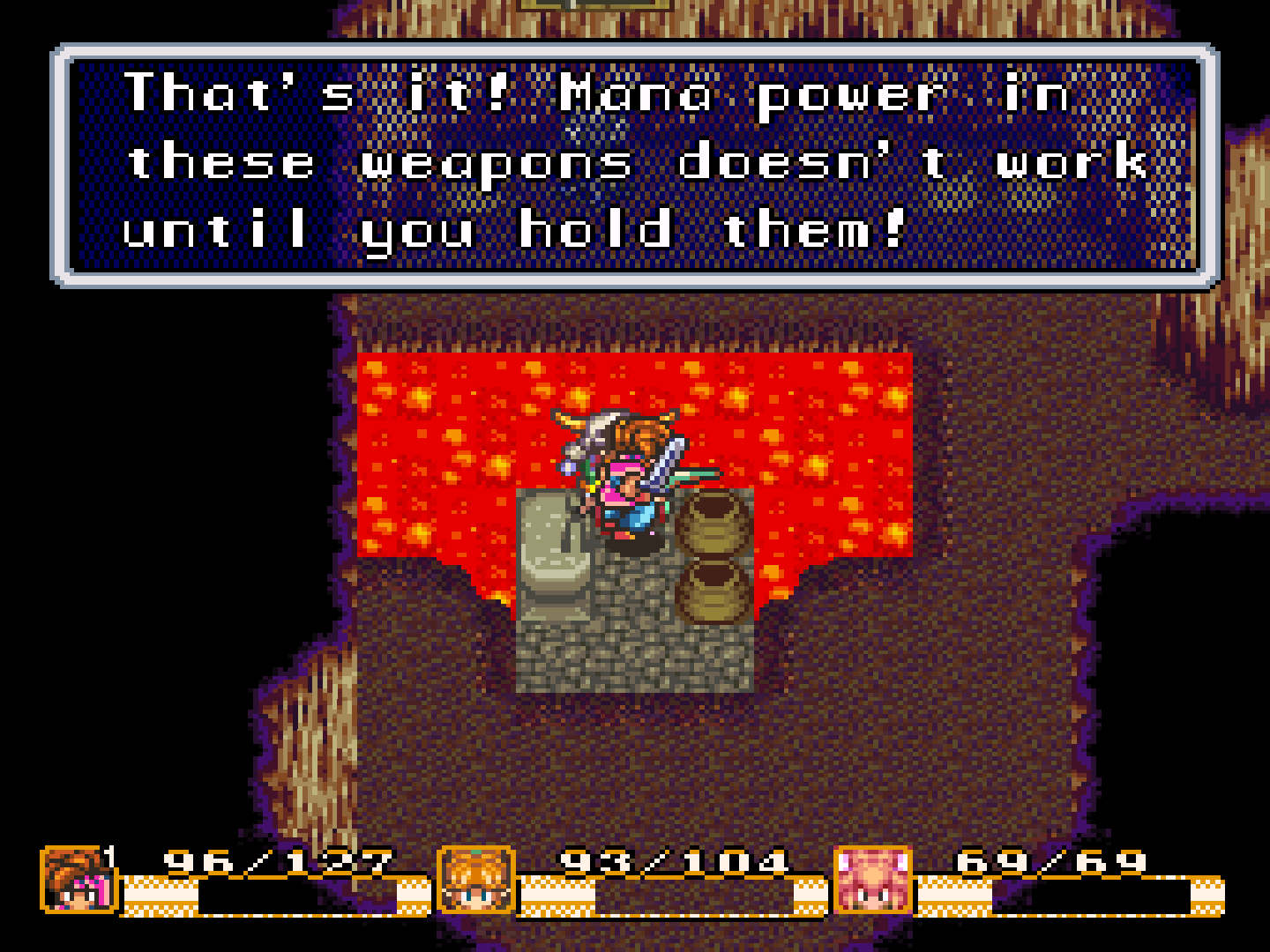 Watts: “This axe is mighty special! You could even smash a boulder with it!”

Wait, the stalagmites in the corner of his shop could be crumbled easily with the axe...

Watts asks us to bring any weapons to him so he could forge them in order “to release any Mana received from the orbs.”

Watts then guides us to a shortcut, the one where the stalagmites are. He destroys them, clearing a path to the stairway! Thank you, Watts!

So Watts can upgrade our weapons if they're ready to be.

I have him upgrade the Spear, which becomes a Heavy Spear!

We climb back up the stairs, meet the salescat, and save again.

Back at the patch of flowers before the forest, the old man breathes a sigh of relief seeing Max safe.

Now to the portal...

The Chobin Hoods are a bit more tolerable to take on this time, but they can still hit heavy damage to my other allies if I'm not careful.

I resurrect her with another Cup of Wishes.

The Chobin Bow and Arrow’s are also ready to be upgraded! But I need to get an orb for it first...

We make our way to the tree roots, and chop them up easily with Watts’s Axe! 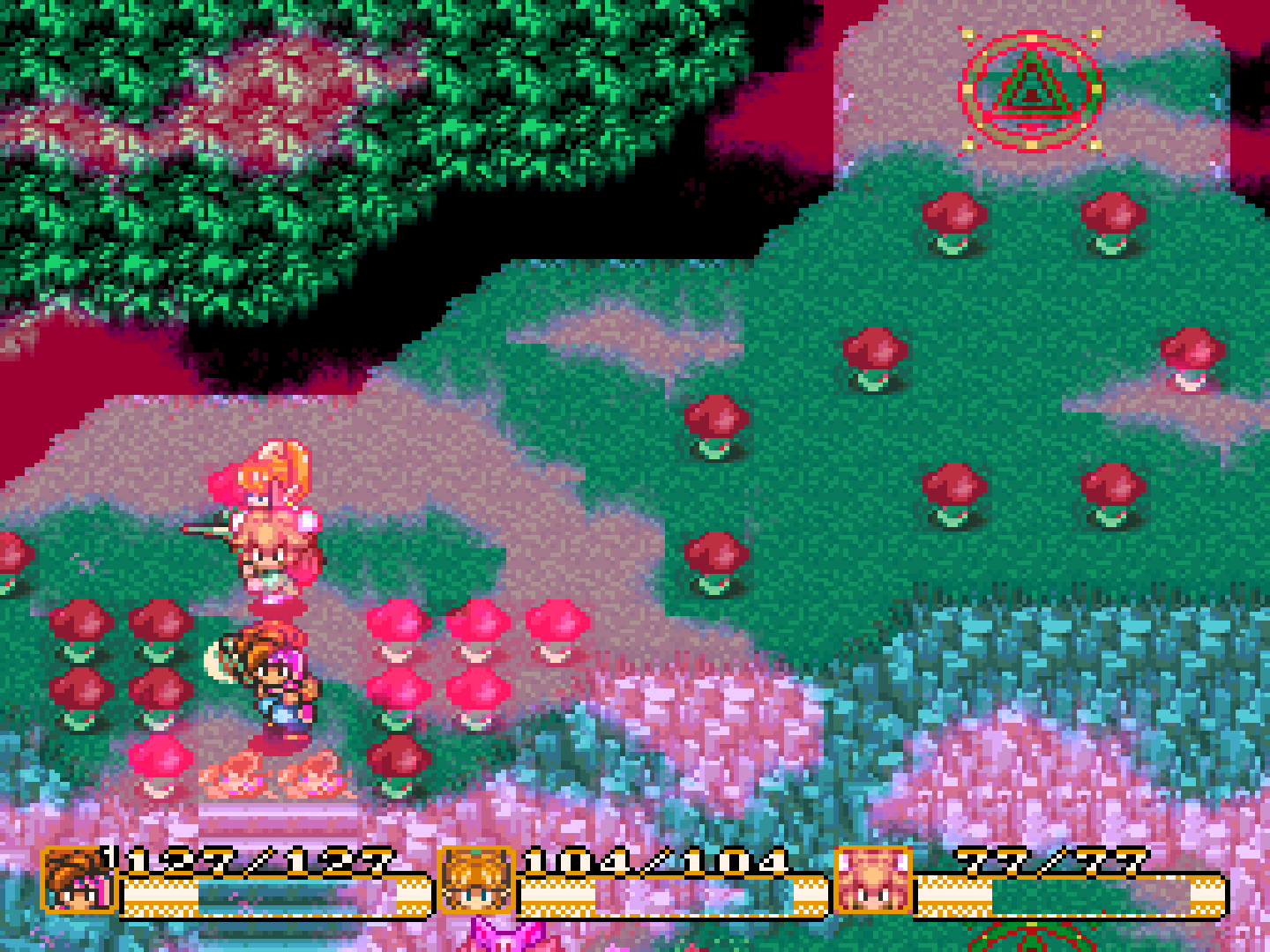 Now off to Elinee’s house...

We warp to the area where we formed the land bridge earlier, and climb down the stairs...

Inside a garden mini-maze now... 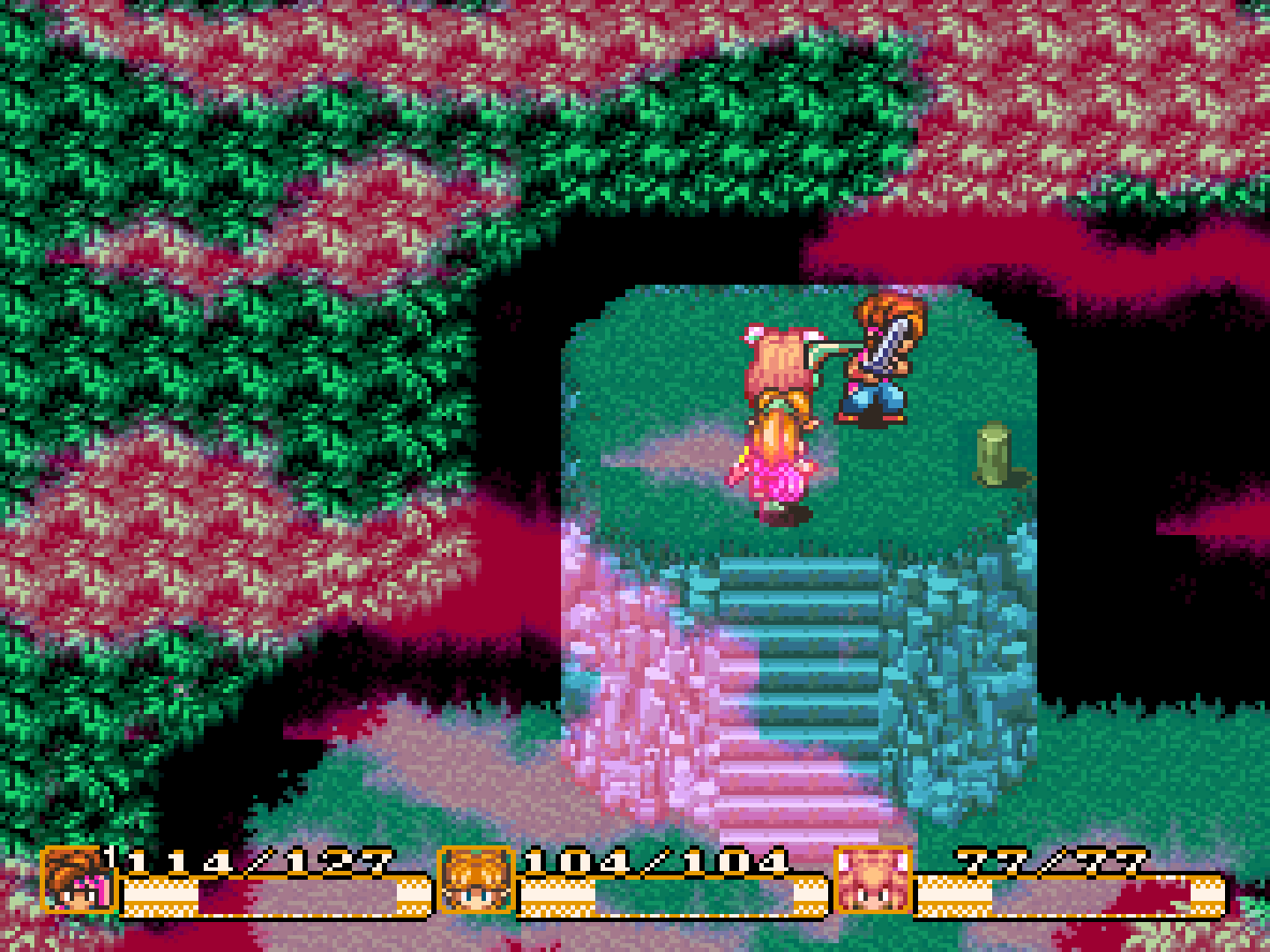 Climbing another set of stairs, we see a small wooden post. The other side probably leads back to the portal near the Water Temple... 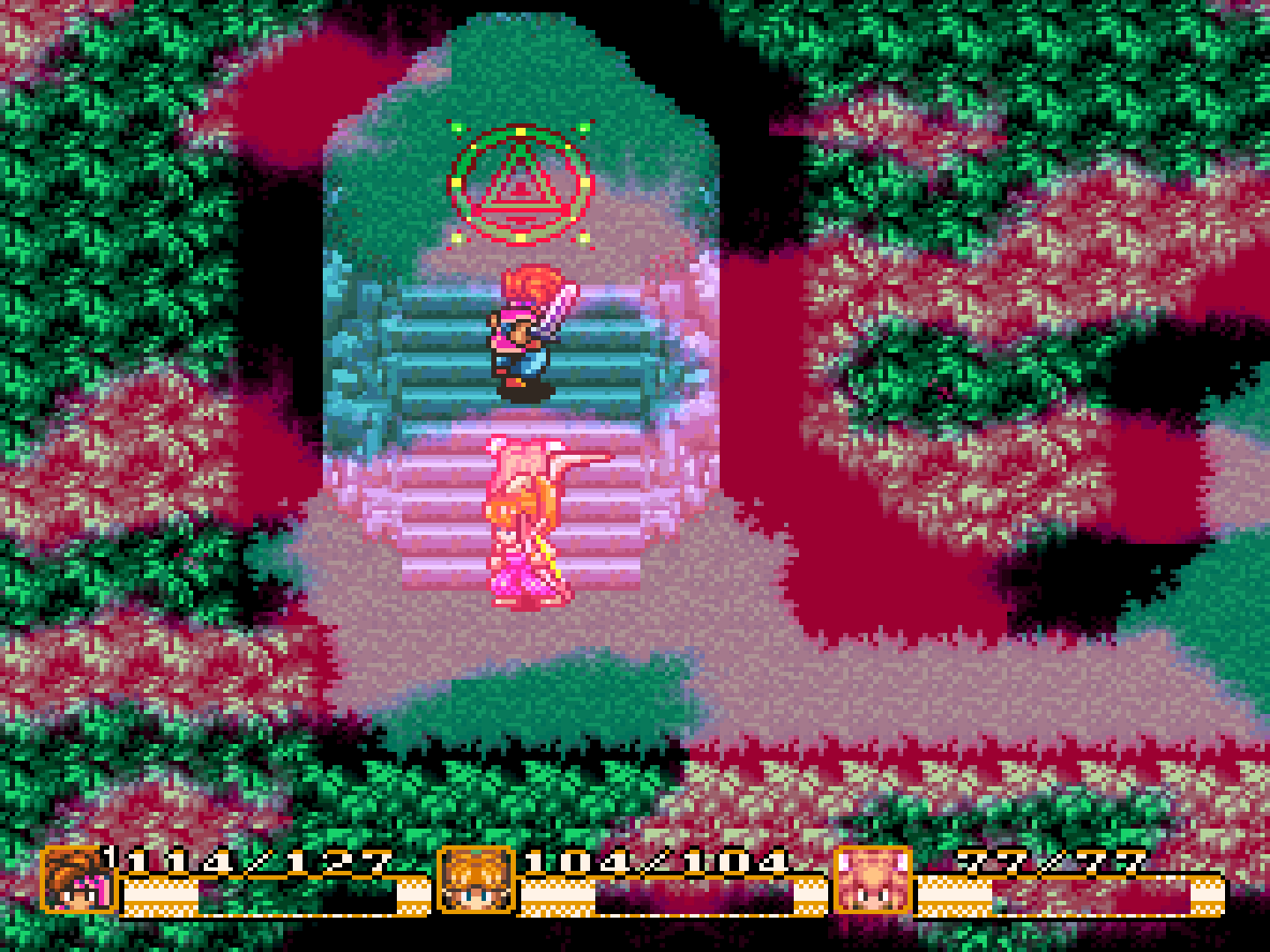 We enter into the next portal...I hope it leads to Elinee’s castle.

Instead, we continue down the cliff and into a more complex shrub maze...

After taking care of the last bat monster in the maze, we hurry off to the next portal. Let's hope this is the one leading to Elinee’s castle. 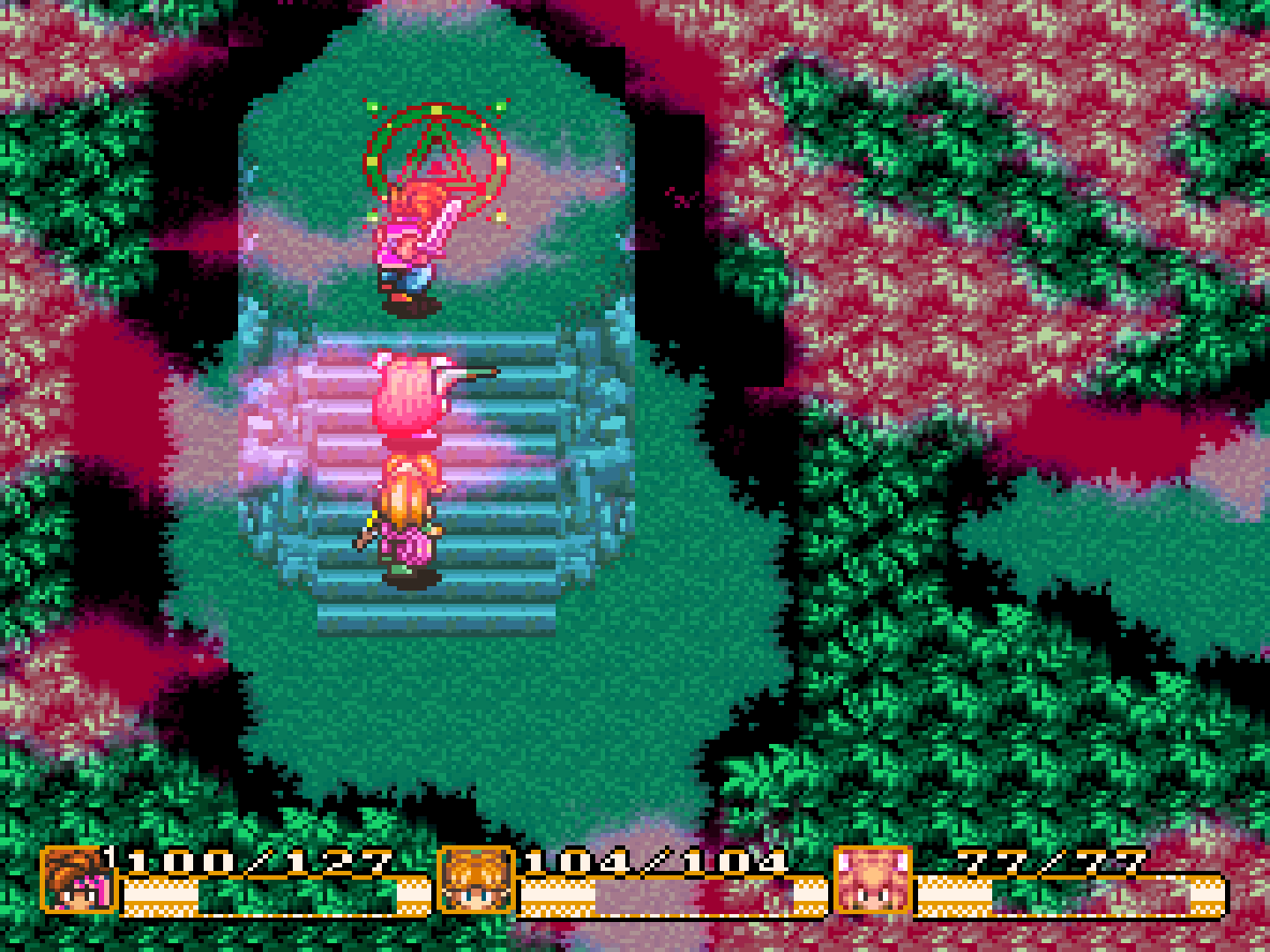 As we make it to the outskirts of the castle wall, a werewolf lunges and gives Hero a one-two combination!

We take care of him, but because of my curiosity, we accidentally end up leaving the castle!

Going back, we get the drop on the werewolf this time, but he overpowers the party with his martial arts! 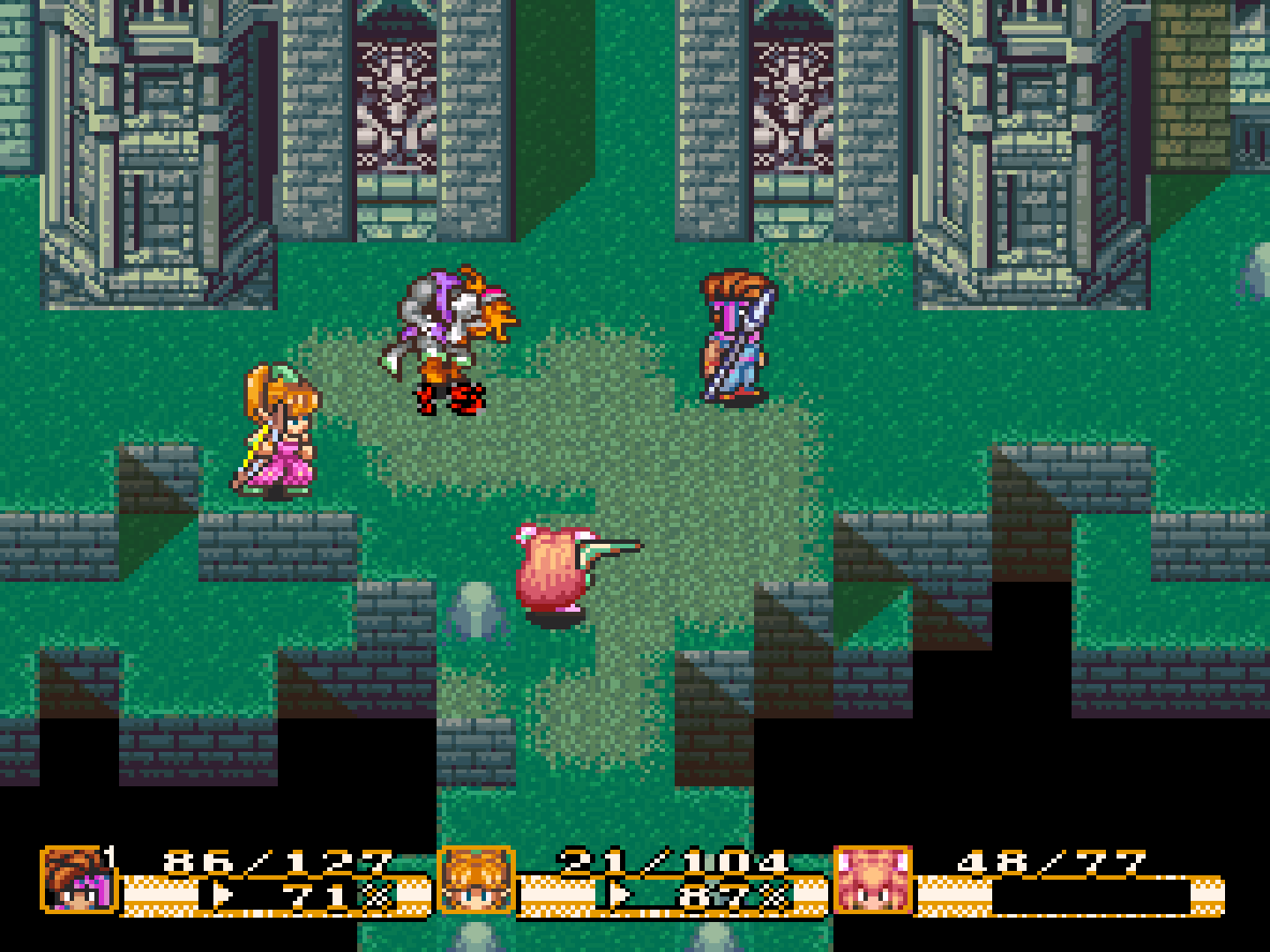 We check around the outer wall...

My god, Elinee was well prepared for our arrival, as she has Eye Spies on both corners inside the castle walls...

We take care of the eastern security, now for the western side... 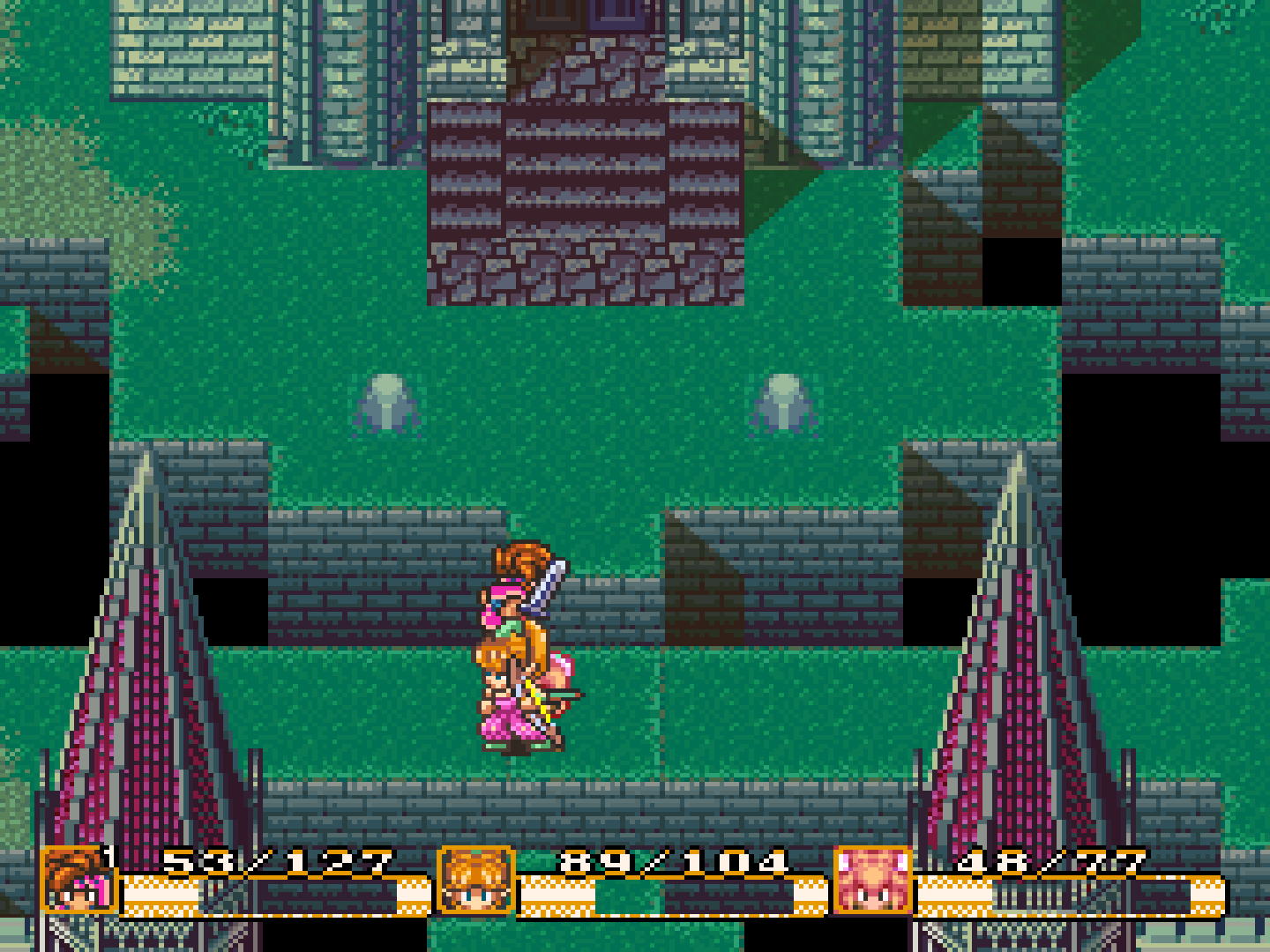 Hero gets turned into a moogle again, and dies!

I have Pidge revive him once more, and the security troops here are eventually taken care of!

We turn north and east and we make our way into the castle’s entrance!

After opening the portcullis by pressing on a button, the Eye Spy turns both Max and Hero into moogles!

I take control of Pidge and fire away at the Chobin Hoods and Eye Spy...

Sadly, the Chobin Hoods are still a bit formidable and I retreat as soon as the reaper takes both Pidge and Max!

As I flee the forest, I later revive Pidge, and on the way back, I learn a new trick from observing Hero’s allies: I can power-up the attack of the character I'm controlling by holding the attack button!

Back at the Dwarf Village now, where I buy more supplies and a Chain Vest for Pidge for added protection.

This really isn't going to be easy...

For the questions I have now for this game so far:
How did Elinee turn from good into evil?
Is it because of the shift in Mana, or is it something else?
Is Major Dyluck still alive?