Fully rested, I have the party head out to the blacksmith. 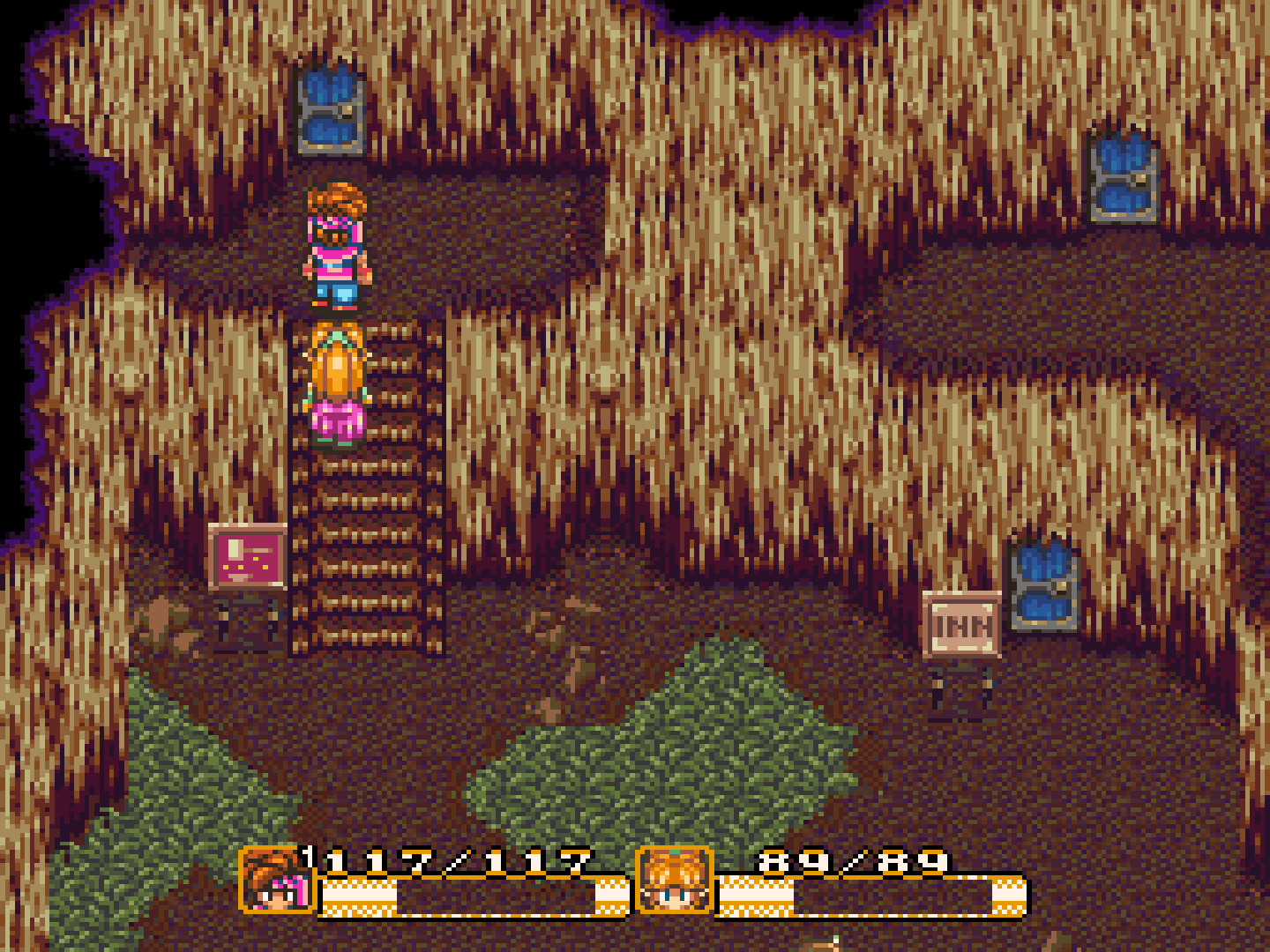 I'm guessing this door leads to where the blacksmith resides.

The blacksmith wastes no time, as he spots the Sword's growing rust problem quickly. 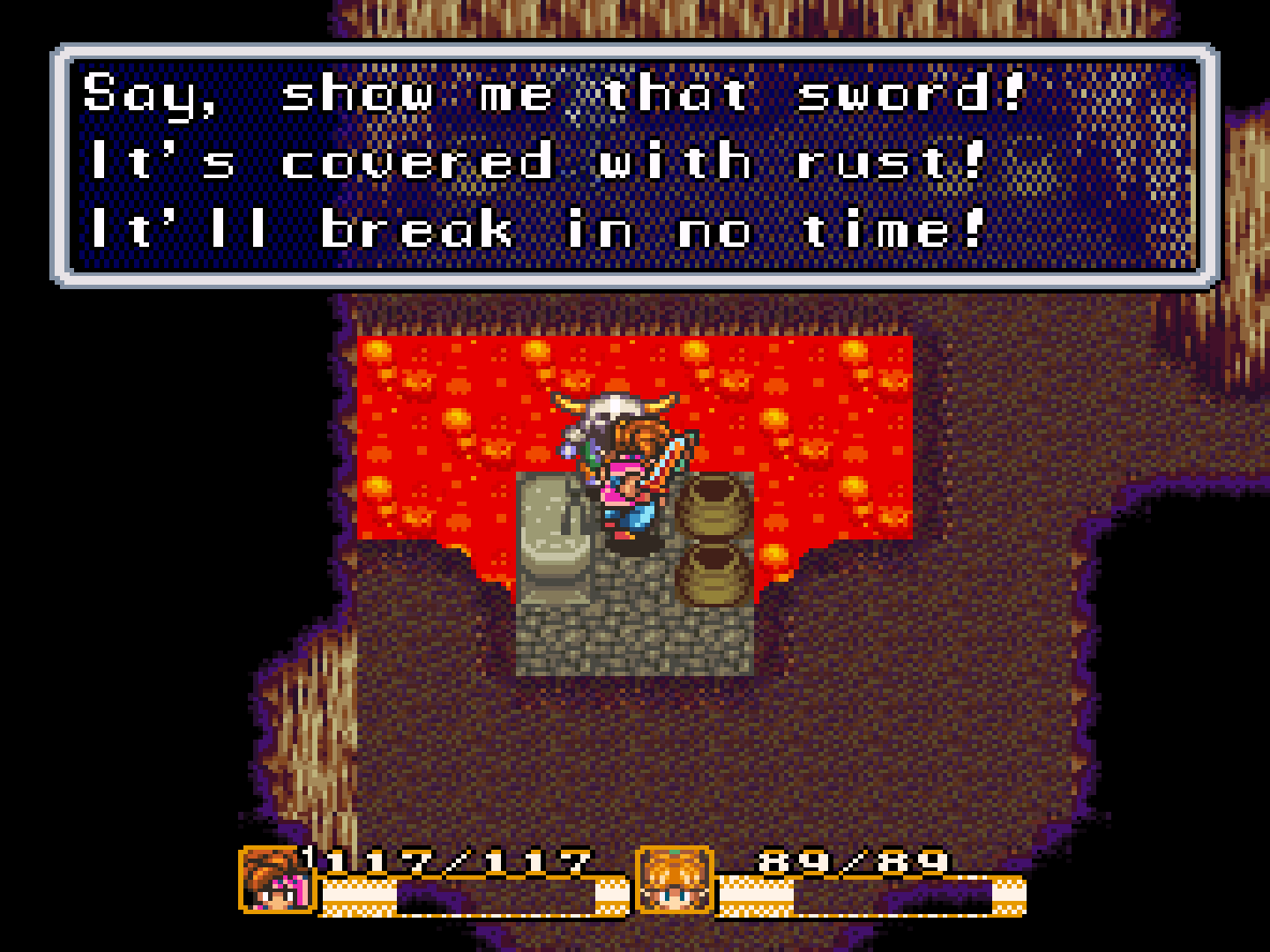 He introduces himself as Watts, and asks for 100 to repair the Sword. We accept and give him the payment. Watts gets to work!

A jiffy later, he gives the Sword back to us, amazed at bringing its elegance back. 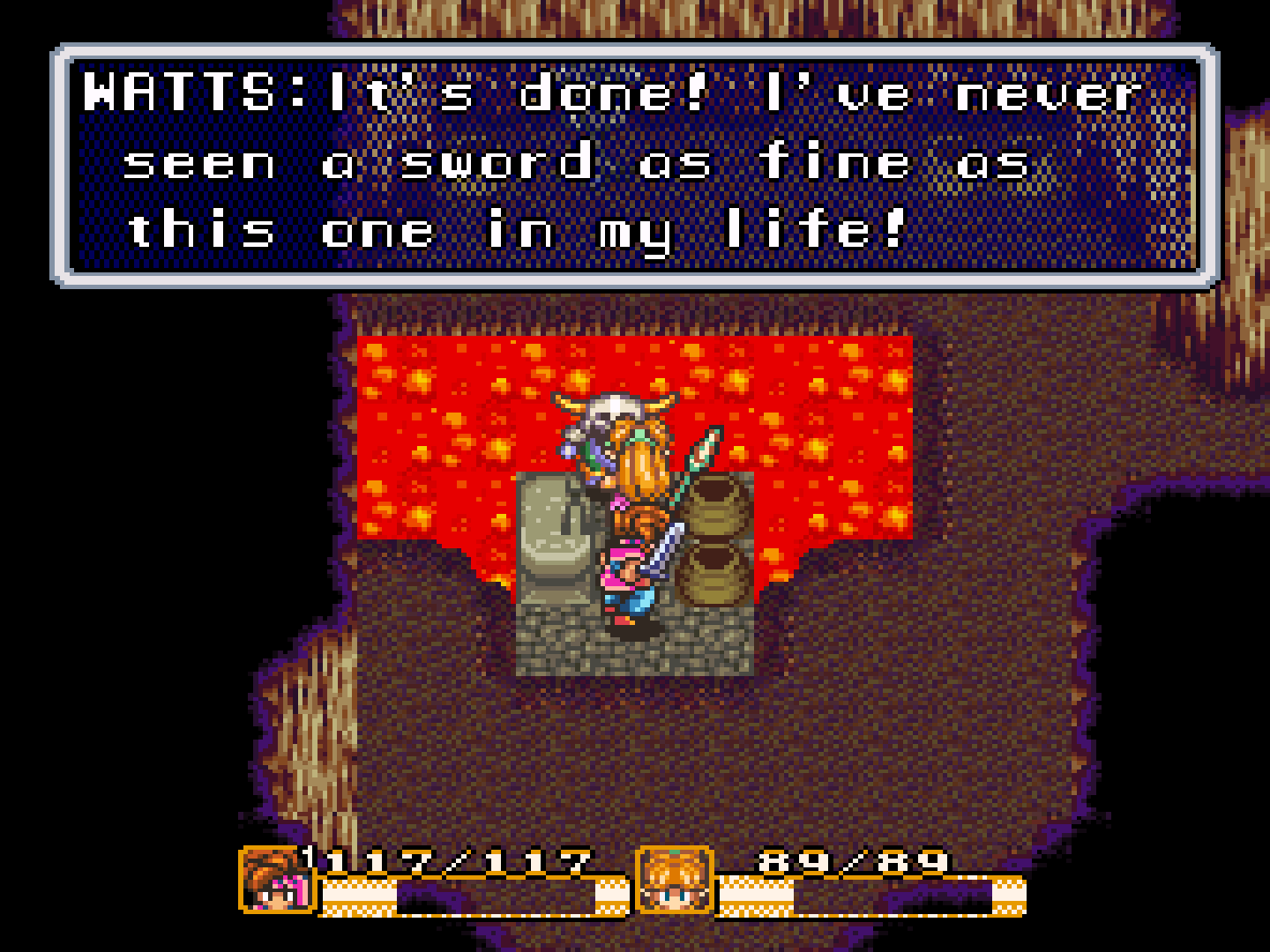 But, the blacksmith's hammer begins to glow...and a small flash later, he notices we have a very important item! 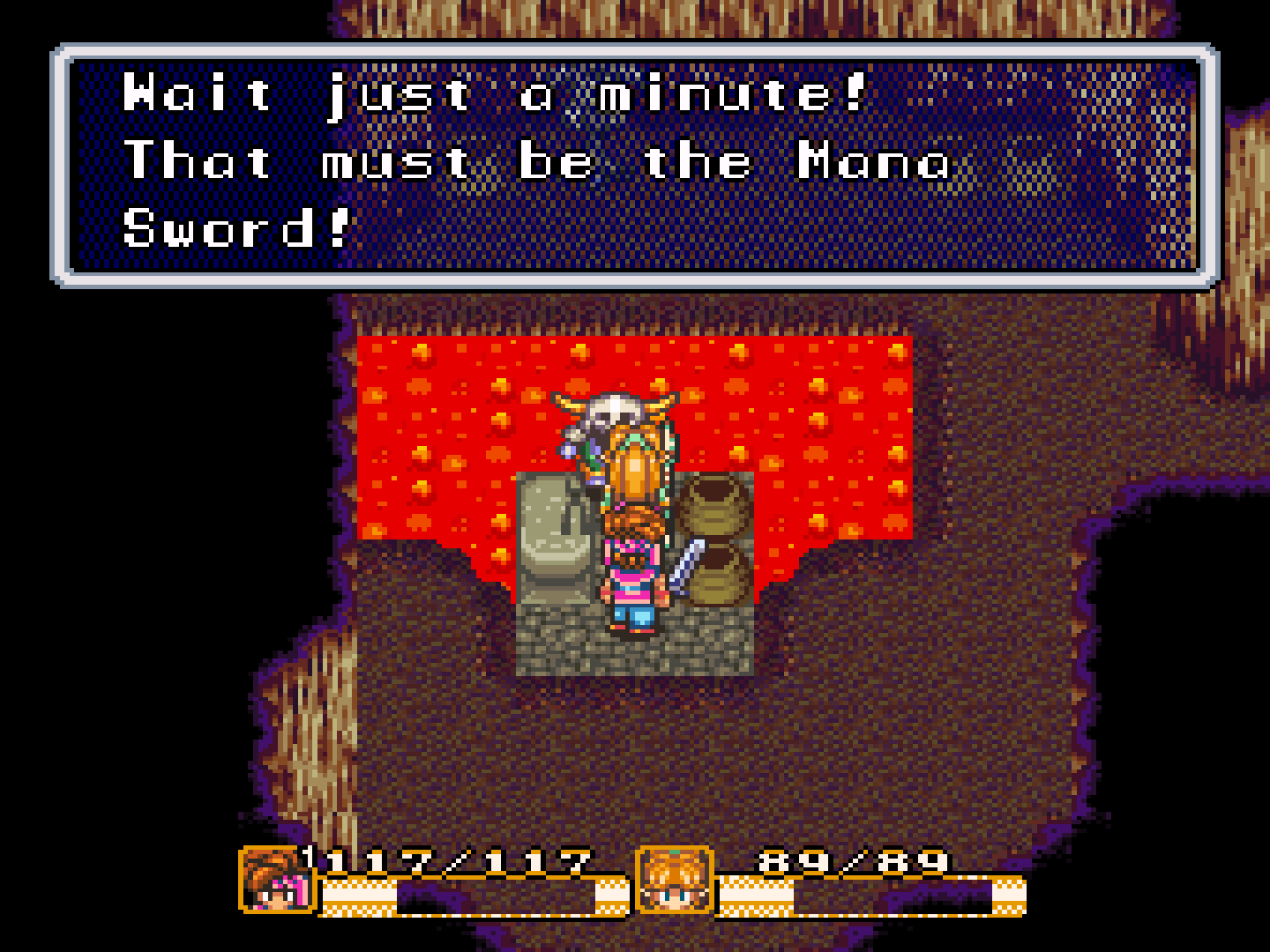 Watts: "Astonishing! Perhaps the power of the Mana Sword has seeped into my hammer! Great! Think I'll try making an axe with this. Come back in a while."

That felt a bit like the plot was guiding his hammer to create the axe. Maybe the power of the Mana Sword is so mighty that it can inspire people to do great things...

I talk to a dwarf who mentions earthquakes happen most of the time in the village. His point is proven.

Another says that the Underground Palace has been buried for ages.

I check the weapon level menu. Looks like the Rusty Mana Sword's gotten an upgrade now! 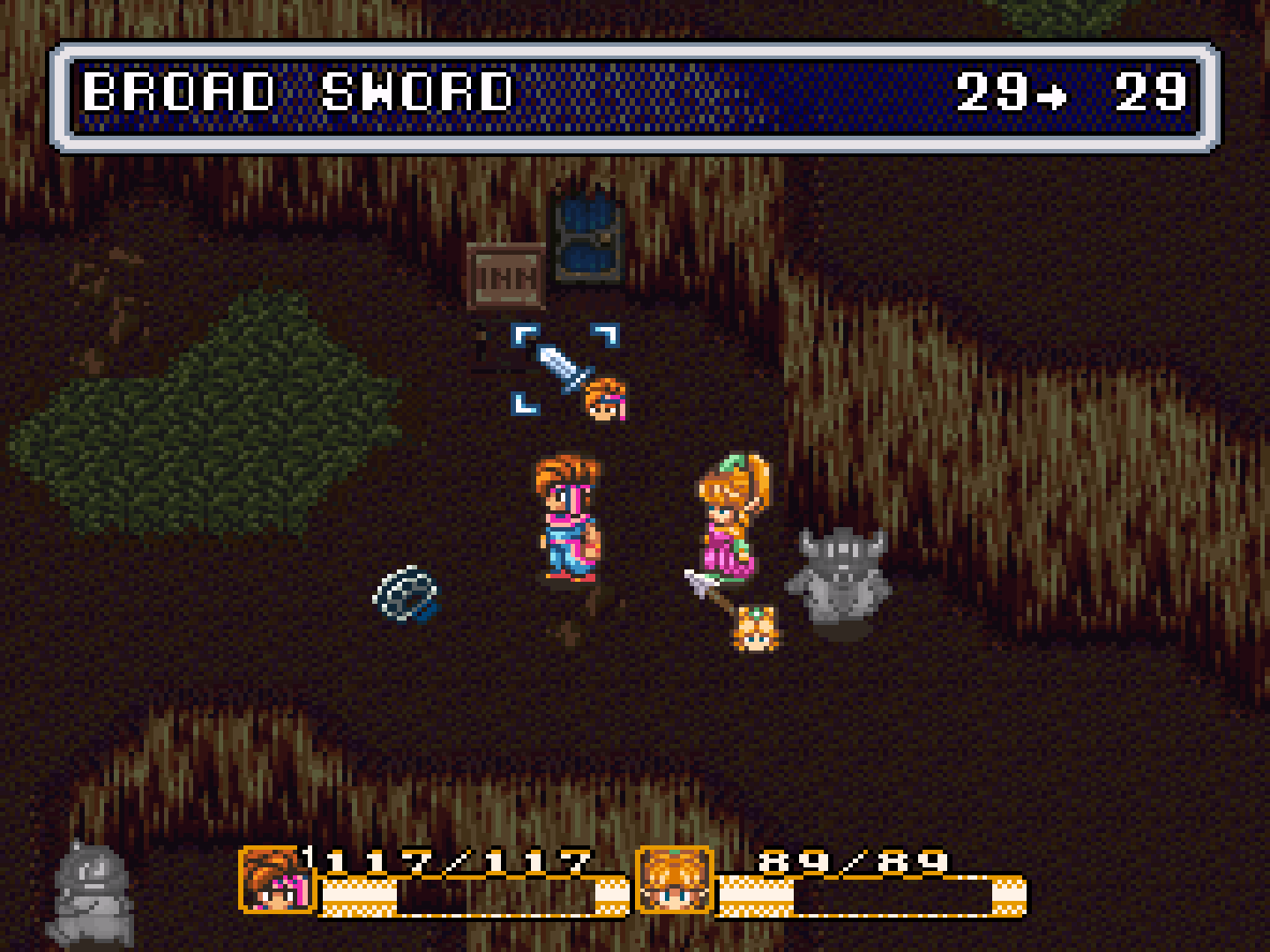 I go inside the Item and Armor Shop to check out more wares.

I get more recovery items and a few pieces of armor: a Chain Vest, a Midge Robe, and some Head Gear.

Now it's time to sell these overalls...and we're off!

Heading to the door west of the shop, we come across crossroads, leading to one tunnel each. I have Hero take the west path, which leads us to a tourist spot, or an "exhibit hut." 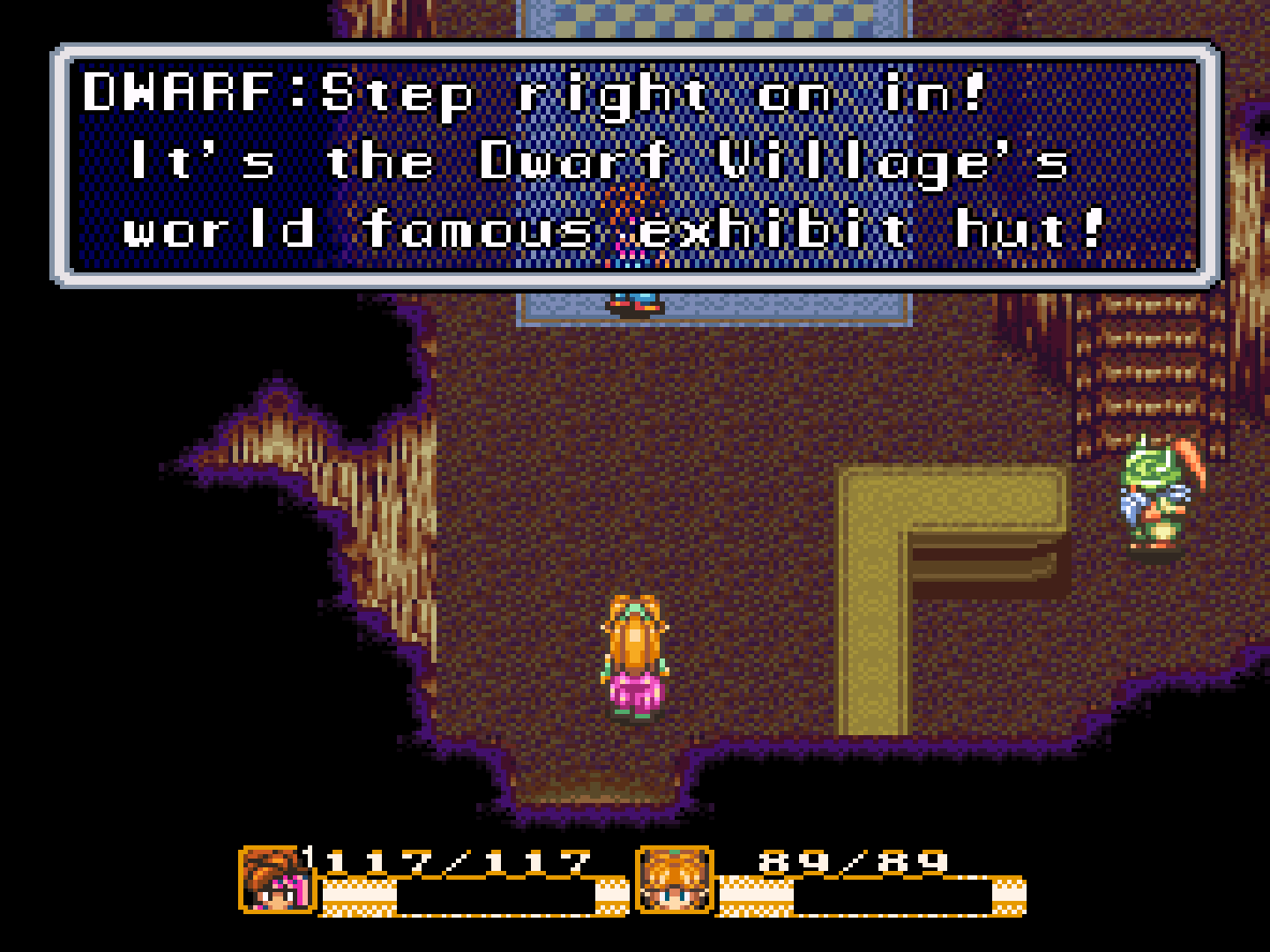 But the fee's a bit too high for the money we have on hand right not, and we head to the east tunnel, which is just a table and a Dwarf telling us to go the Dwarf Village exhibit next door.

I have the party talk to more dwarves, one mentions a sound, like someone's digging underground...

After a rest-and-save, I give the Elbow Pad to Pidge.

Probably the next thing we should do is go to that exhibit...

But first, I do more level, or in this case, money grinding outside the village.

I also check the Broad Sword in the menu. It seems like it has additional benefits thanks to Watts's repairs. 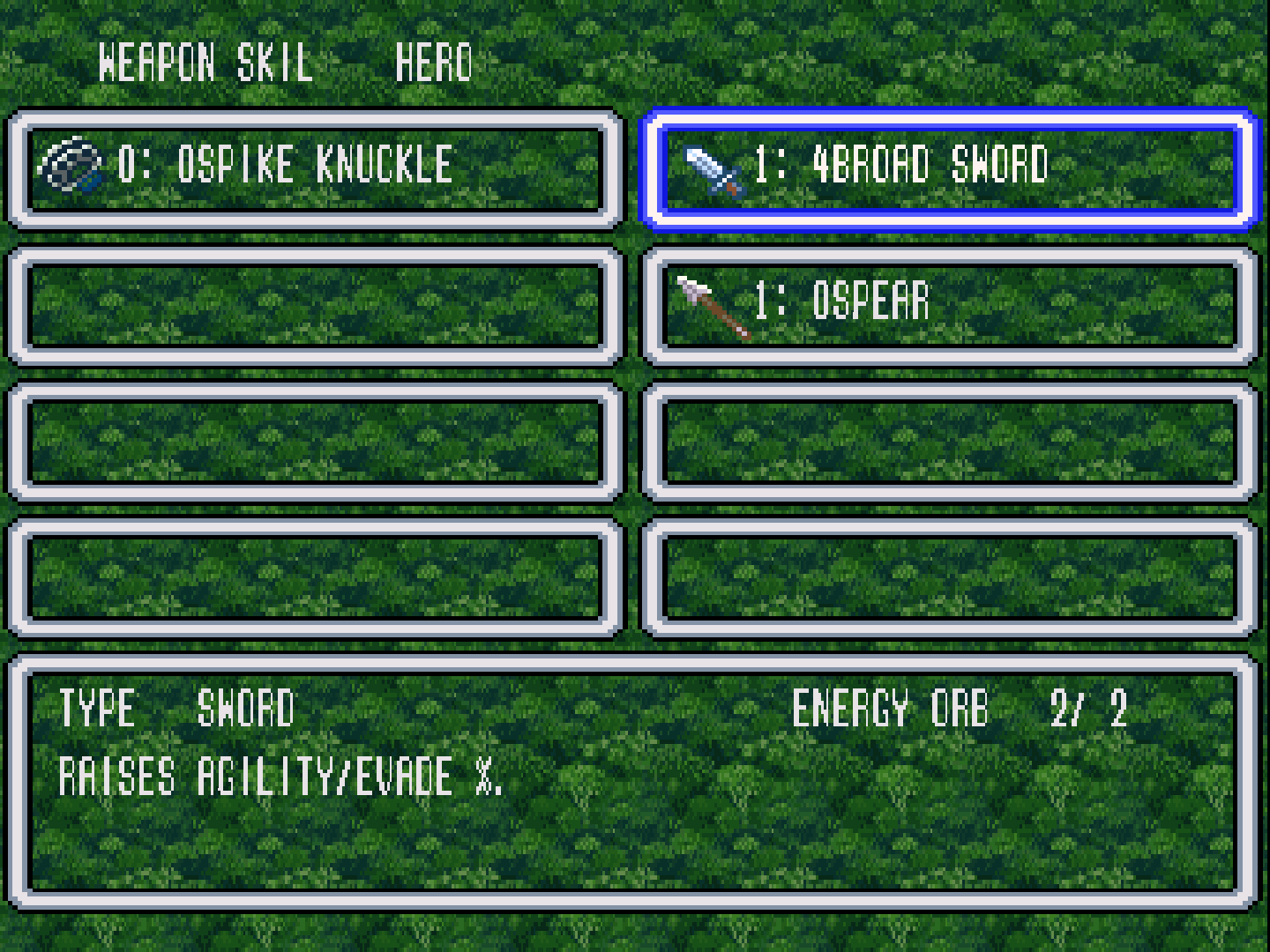 Also thanks to Watts's repair of the sword, we can stand a chance against Green Drops!

We head west to a room where two Kid Goblins, and a stray chest in the middle are. 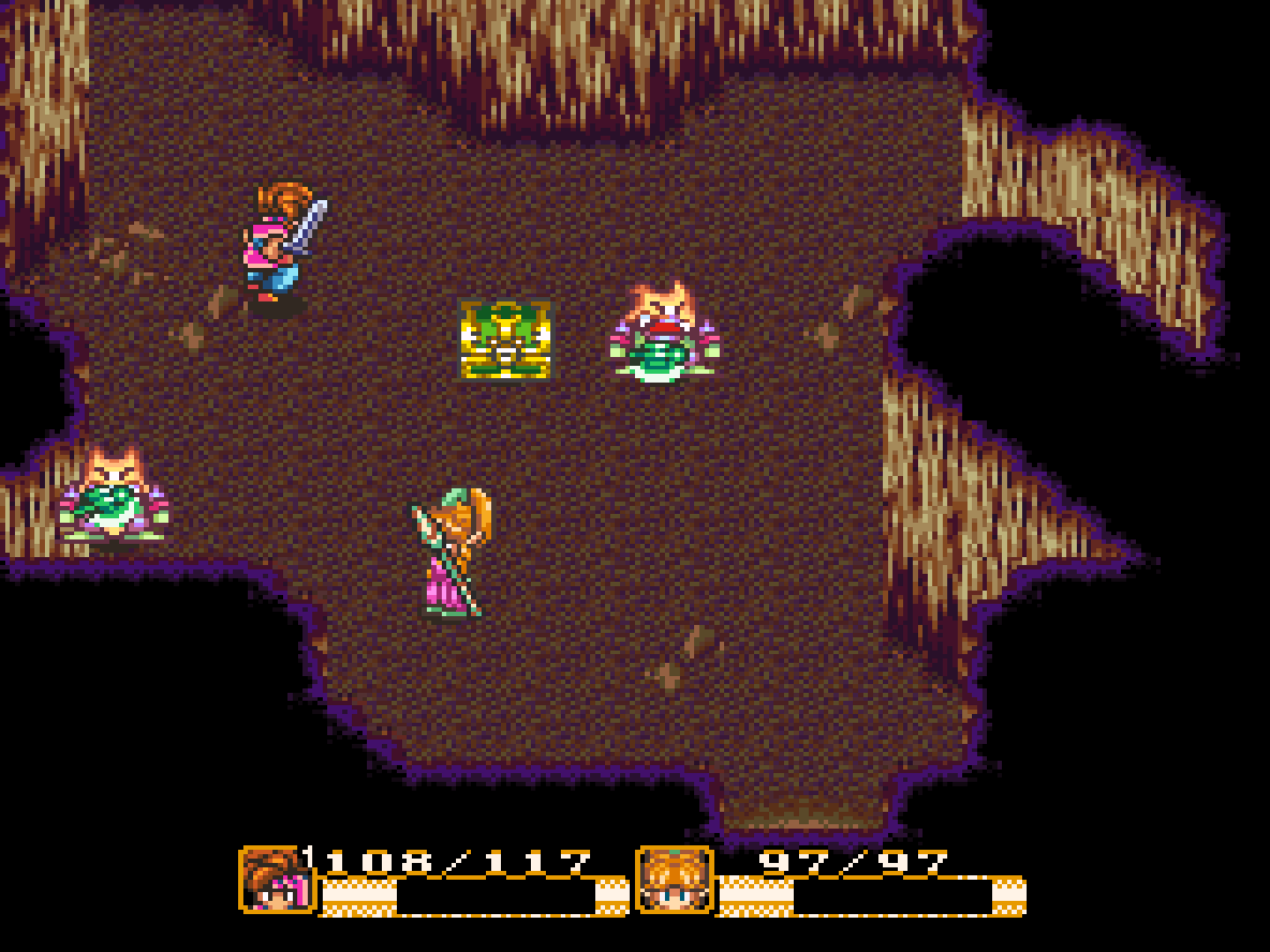 We take care of the Kid Goblins first... 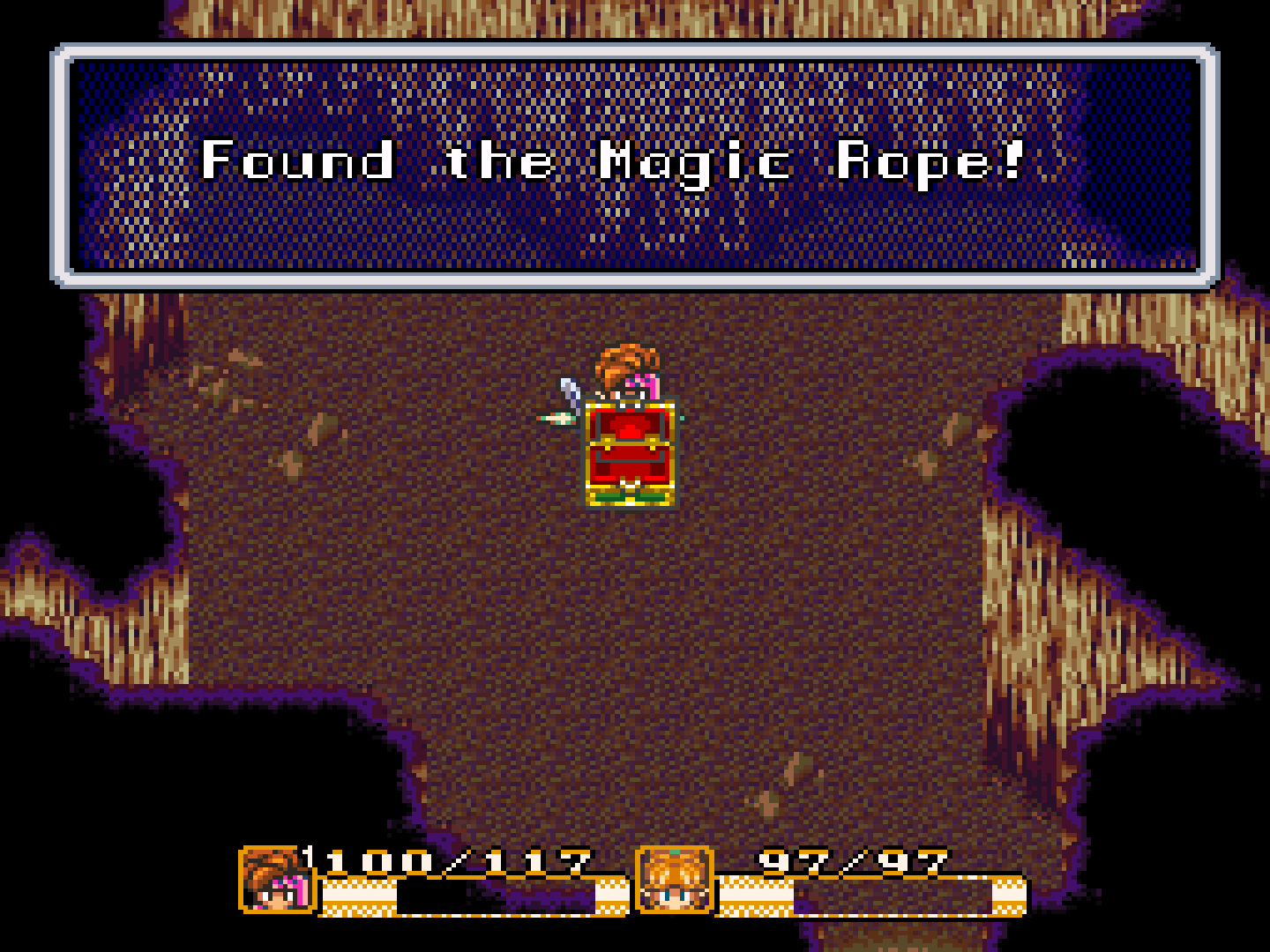 There's a music cue for the Magic Rope, so it must be an important item! I wonder what it does?

Green Drops are still a pain to take care of because of their divide-and-conquer ability!

I noticed that chests can run away too...

After a few battles, with more money on hand, we go see the exhibit hut!

The Dwarf running the exhibit denies he's the Elder, though.

The Dwarf shows us a Rabiteman... 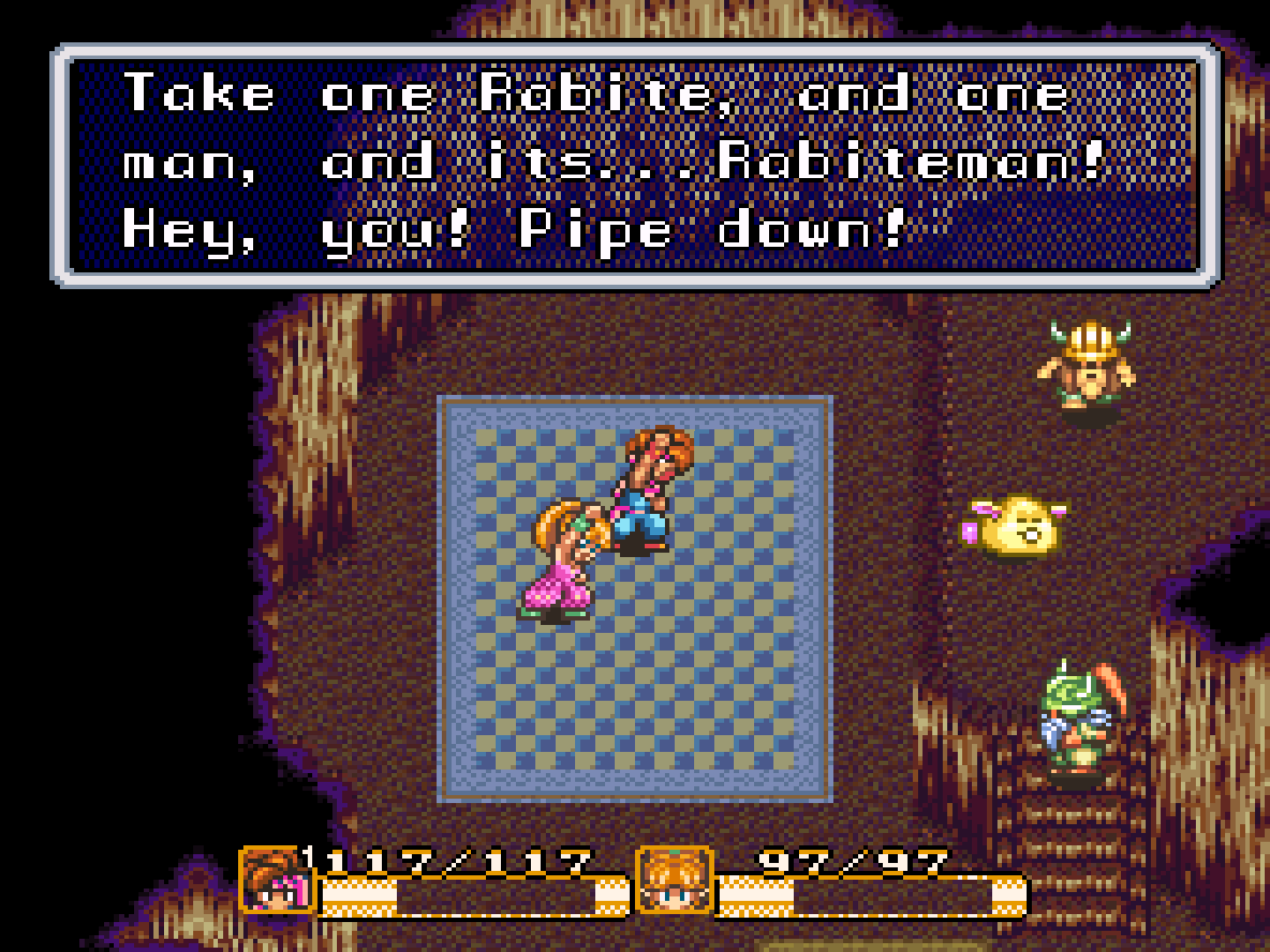 The next exhibit the Dwarf shows us is a Sprite Child... 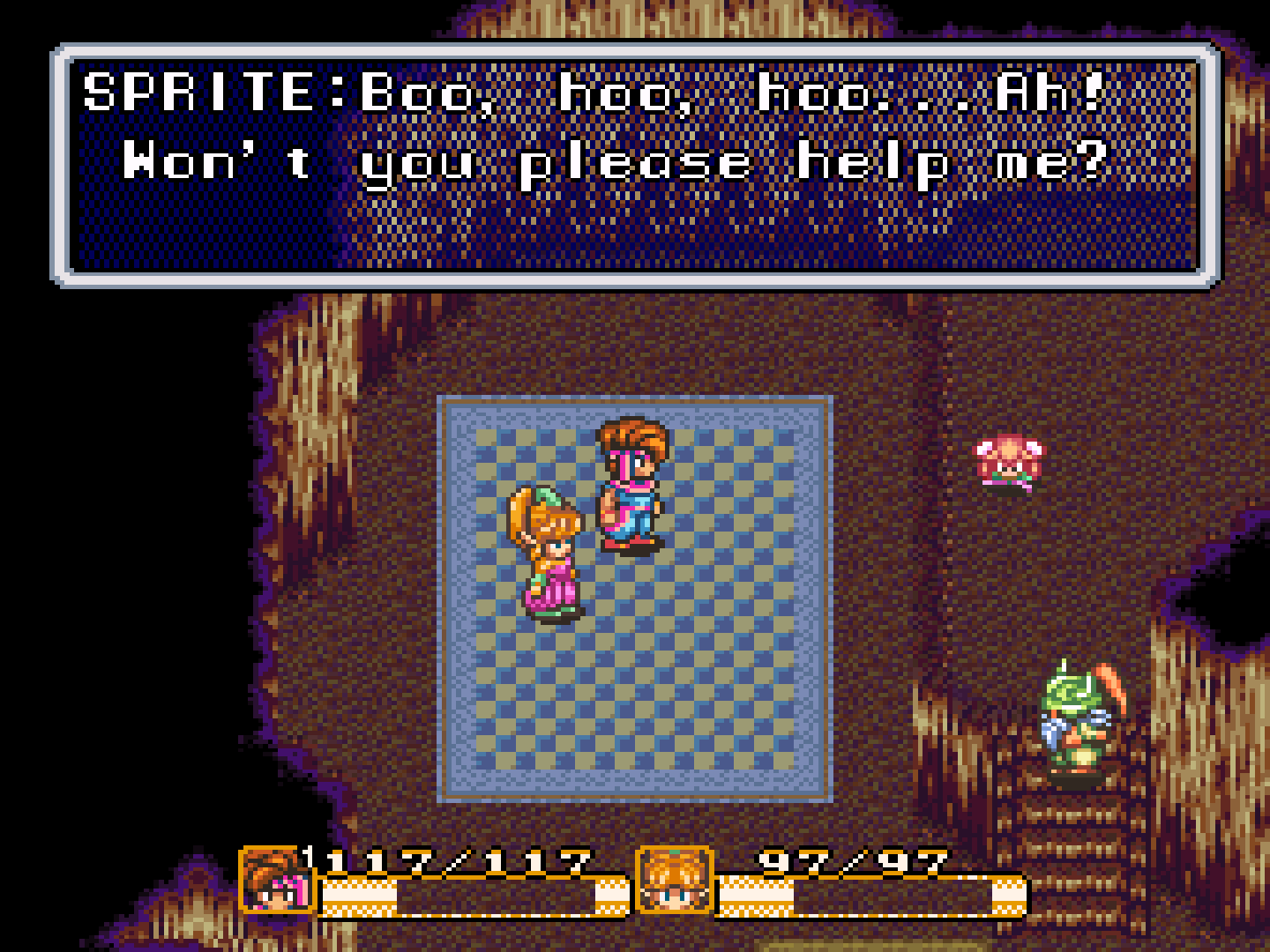 And the Sprite thanks us as he grows to regular size!

And that’s the show!

I hope this doesn't have any ramifications on the game later...knowing how sprites and faes are in legends to be a tricky group...

My thoughts are confirmed... 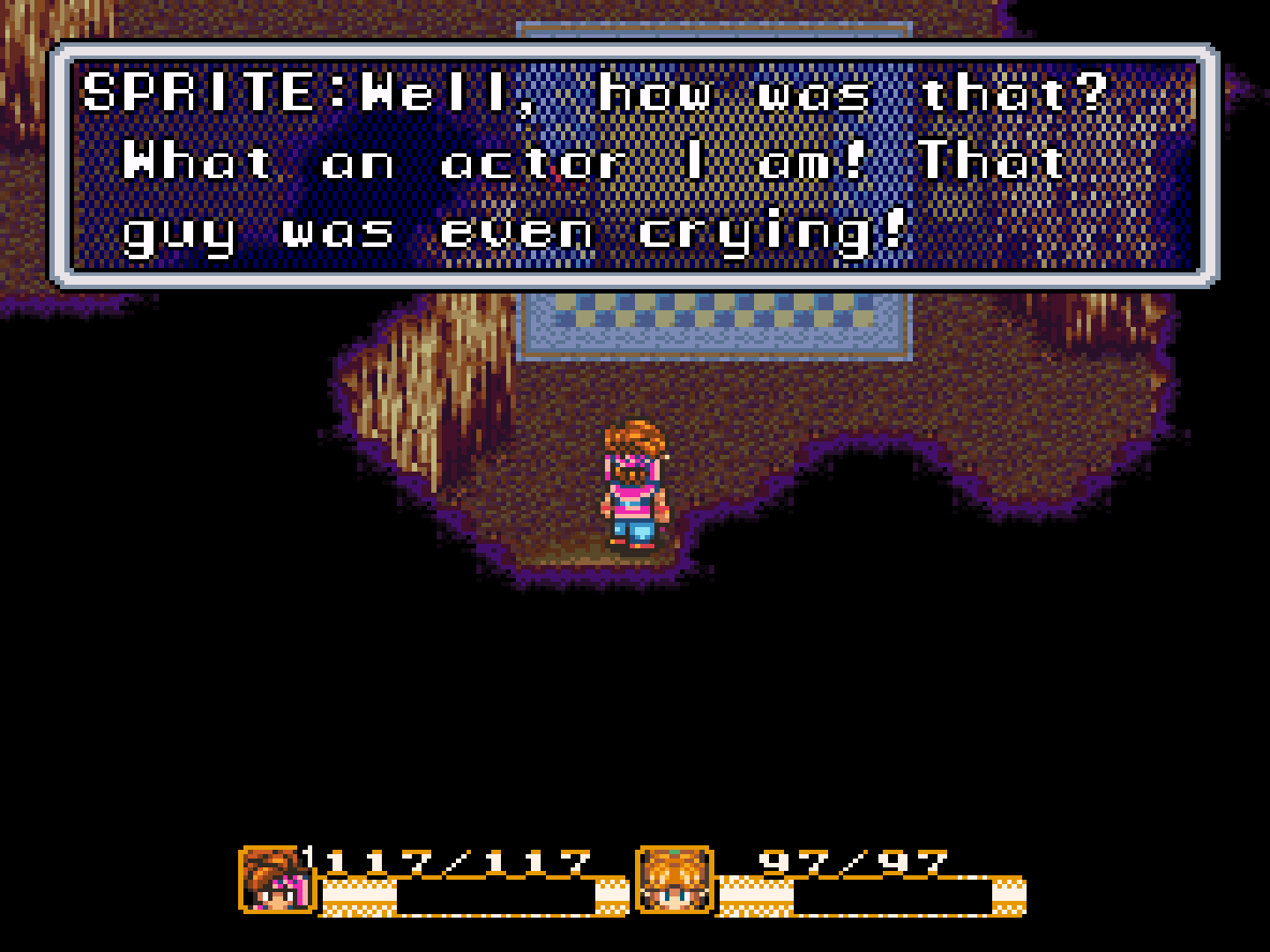 Looks like even the showman’s, or the Elder’s, in on the action too, huh?

We go ahead and talk to them. 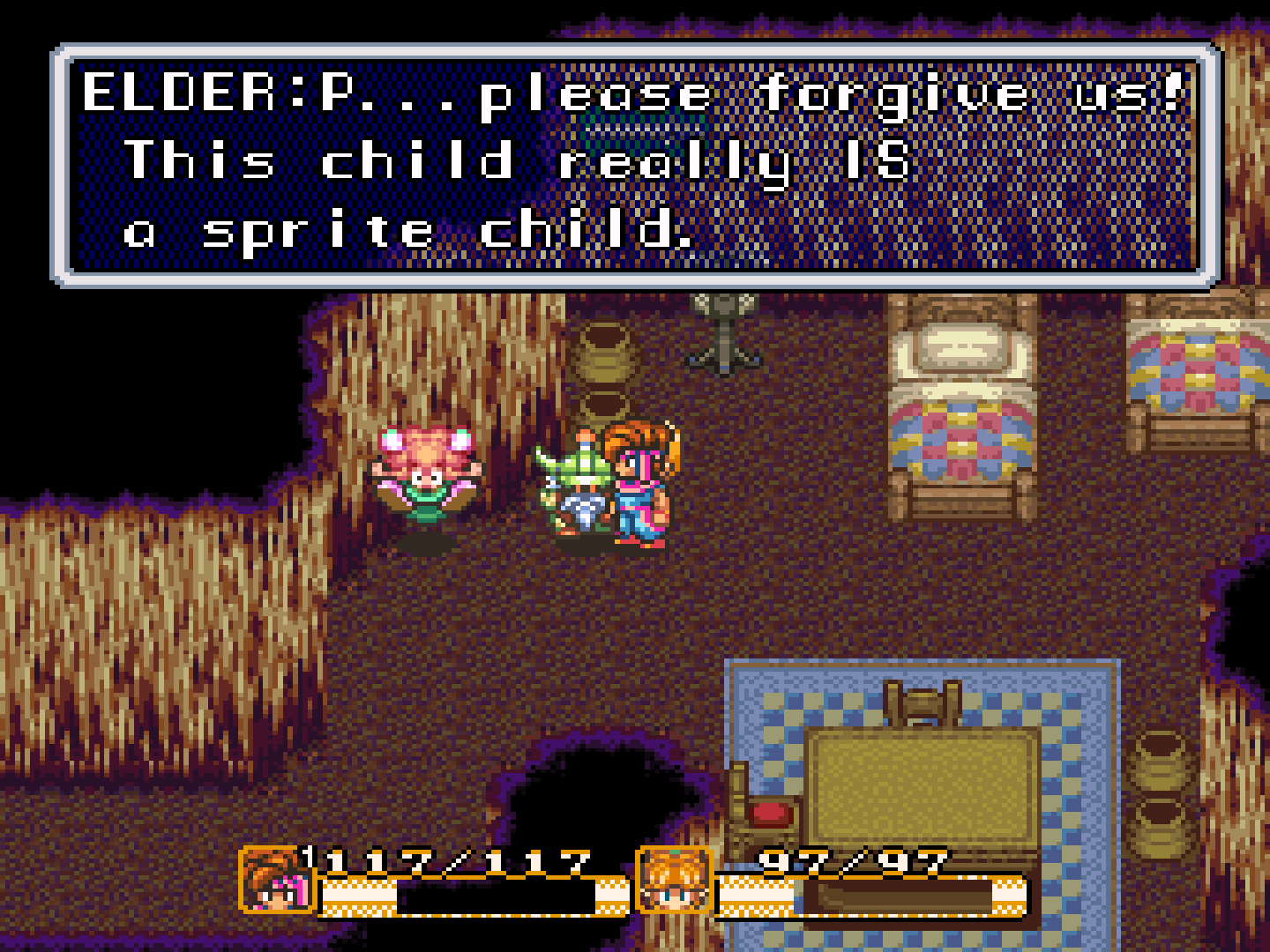 The Elder apologizes and begs for forgiveness as the person next to him is actually a Sprite Child. He tells the story of how the Sprite Child got into the village, which I knew from rumors before: a flood brought him down here.

But why ask for money to return home, though? Is it for a cannon ride?

The Elder tells the Sprite Child to apologize, and he does. The Elder returns the 100 to us, as well as the entrance fee.

They both apologize to us as we wander around the exhibit area before heading back to the blacksmith.

Well, what a crooked show that was!