Now we take the long way westward and northward to the Haunted Forest!

More rounds of battles here, and these monsters are relentless!

I also get my first taste of a chest trap in the form of poison needles! Eeeee...

The Mushboom can also do a rolling attack!

After those exhausting battles, I make a stopover at Kippo Village to rest there for a bit, and to restock on my antidotes.

An Elbow Pad catches my eye while shopping for supplies, so I get it for Hero!

I just realized now that Pidge has MP!

I speak to the old man at the bed of flowers, who mentions that there are plenty of enemies in Gaia's Navel.

Alright, we're now back in the Haunted Forest! 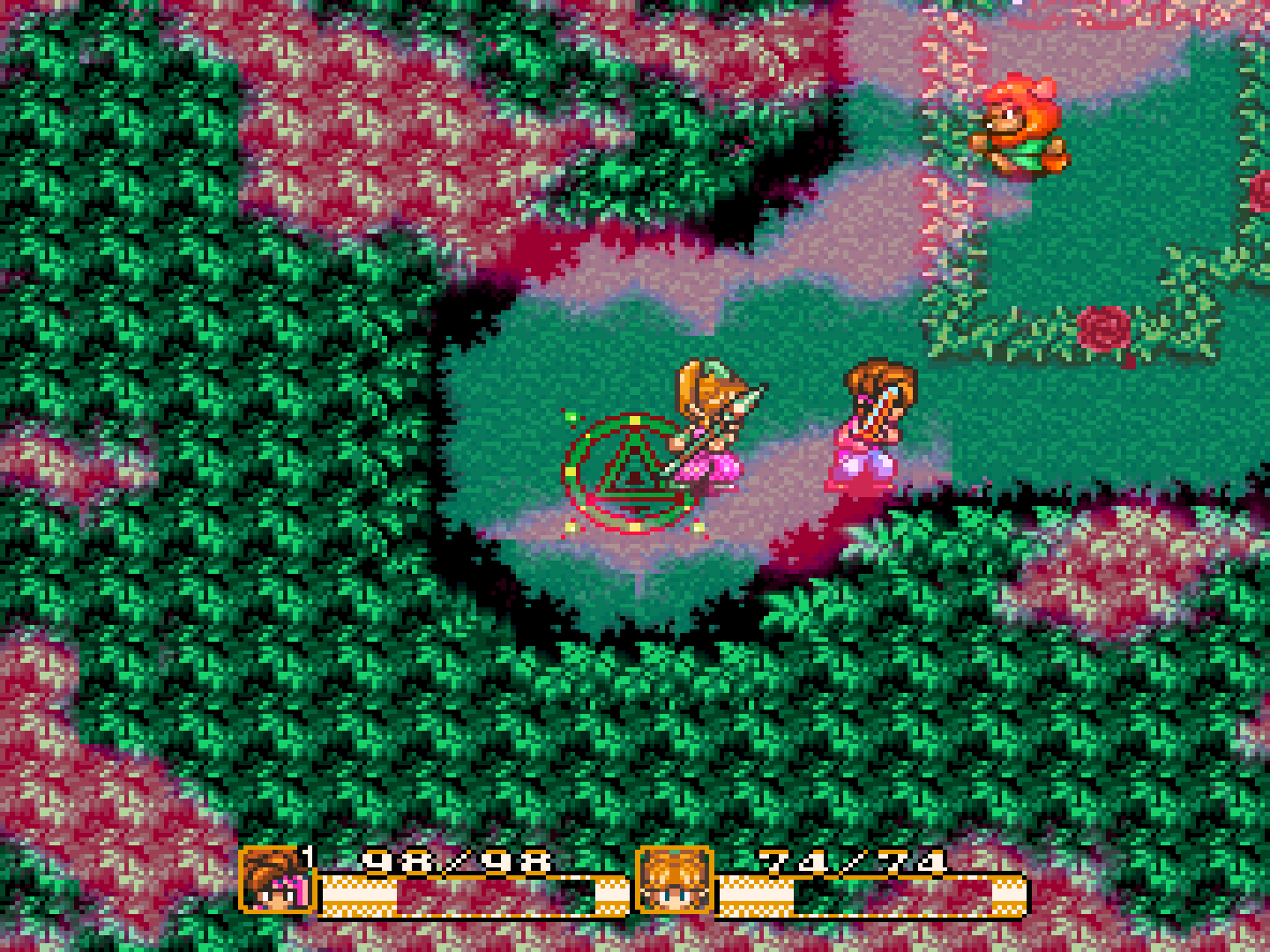 The Chobin Hood's a tough opponent to take care of!

And there's a fleet of them, mostly hiding behind thornbushes and rosebushes!

I find some roses to cut through around their thornbush forts just to take care of them... 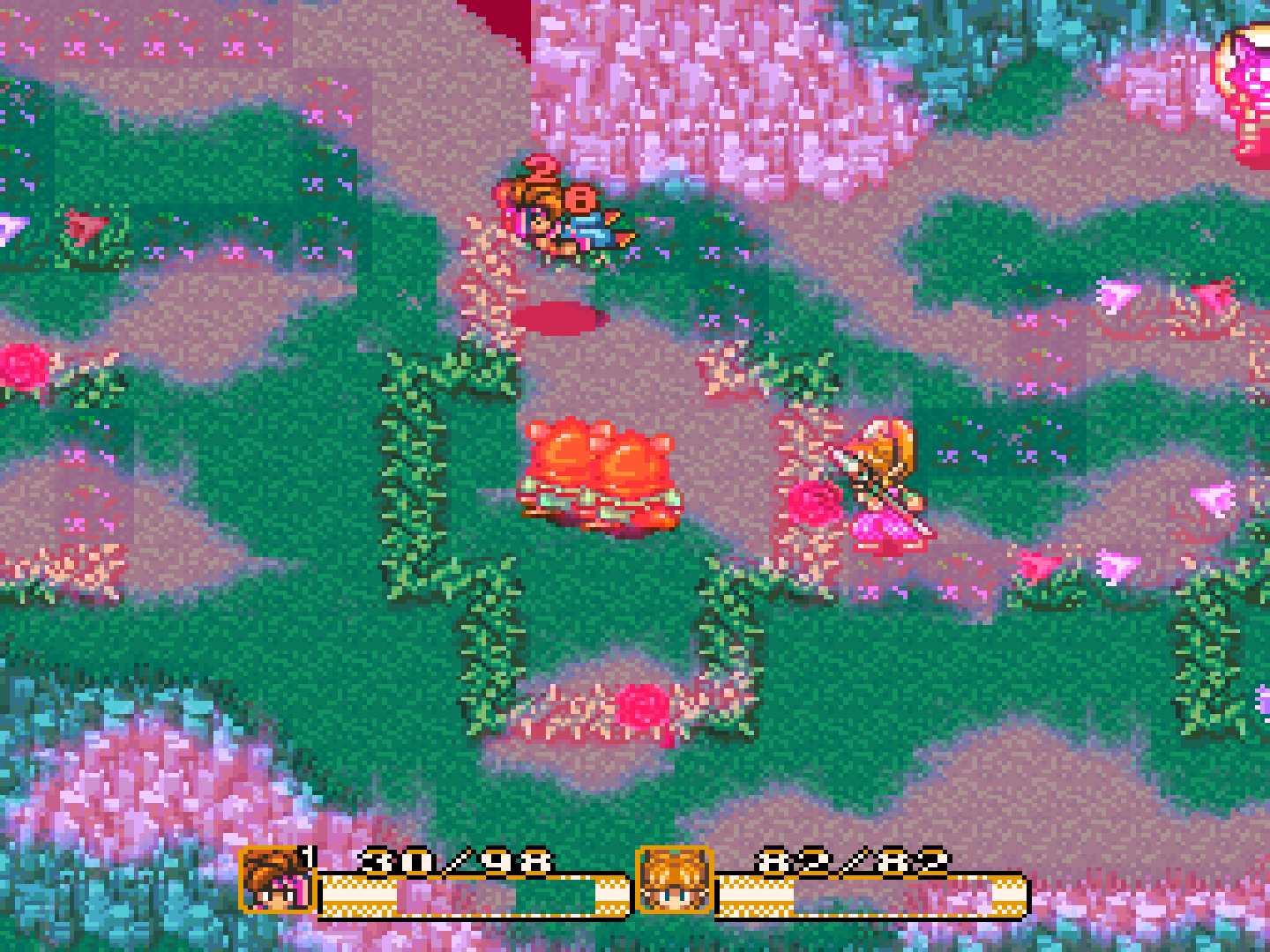 I accidentally find the option to switch control to Pidge, by pressing Select!

I regain control back to Hero, and finish off the surprisingly tough Chobin Hoods. 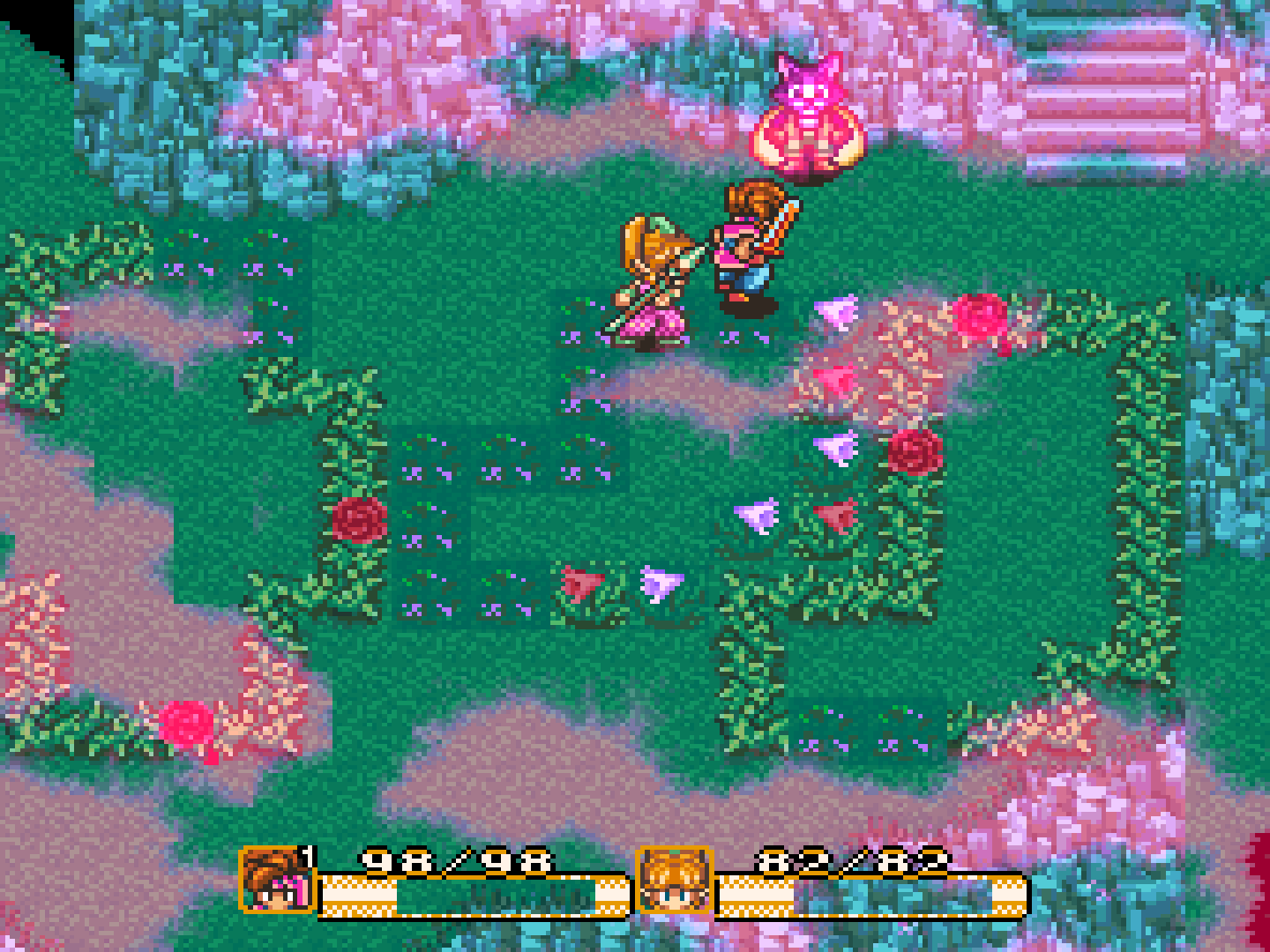 We talk to Neko again. Not only does he have wares to sell us, he can save our game too!

I save at this point before climbing up the stairs and taking care of more Chobin Hoods...

And the ones we finished off earlier have respawned again!

After a bit of a struggle, leaving Hero almost finished, we head into the portal! 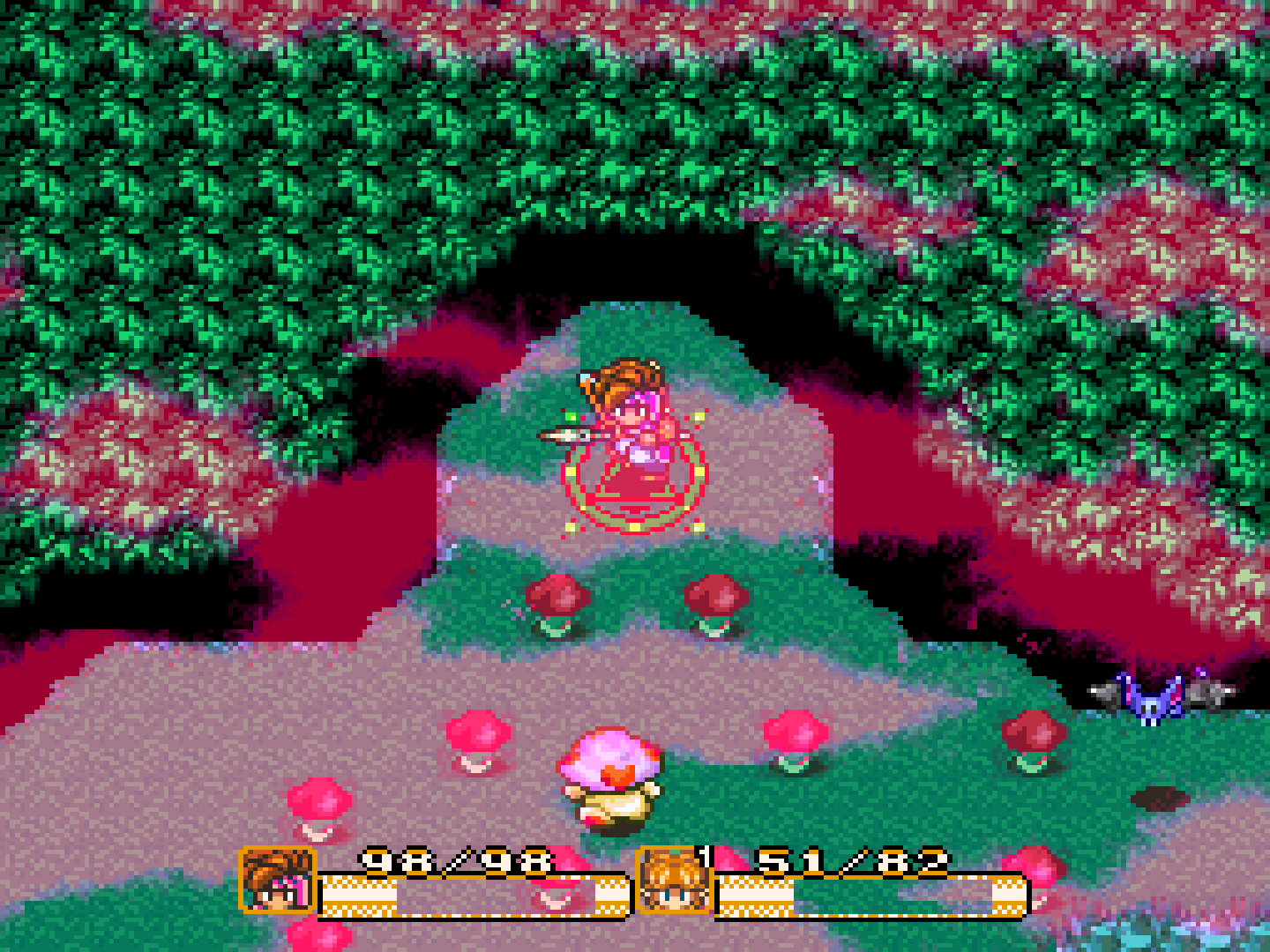 Now which part of the forest are we in?

The new monster, a bat monster called Blat, can cast a Balloon spell, freezing a character!

We proceed southwest, where there's another obstacle barring us further! 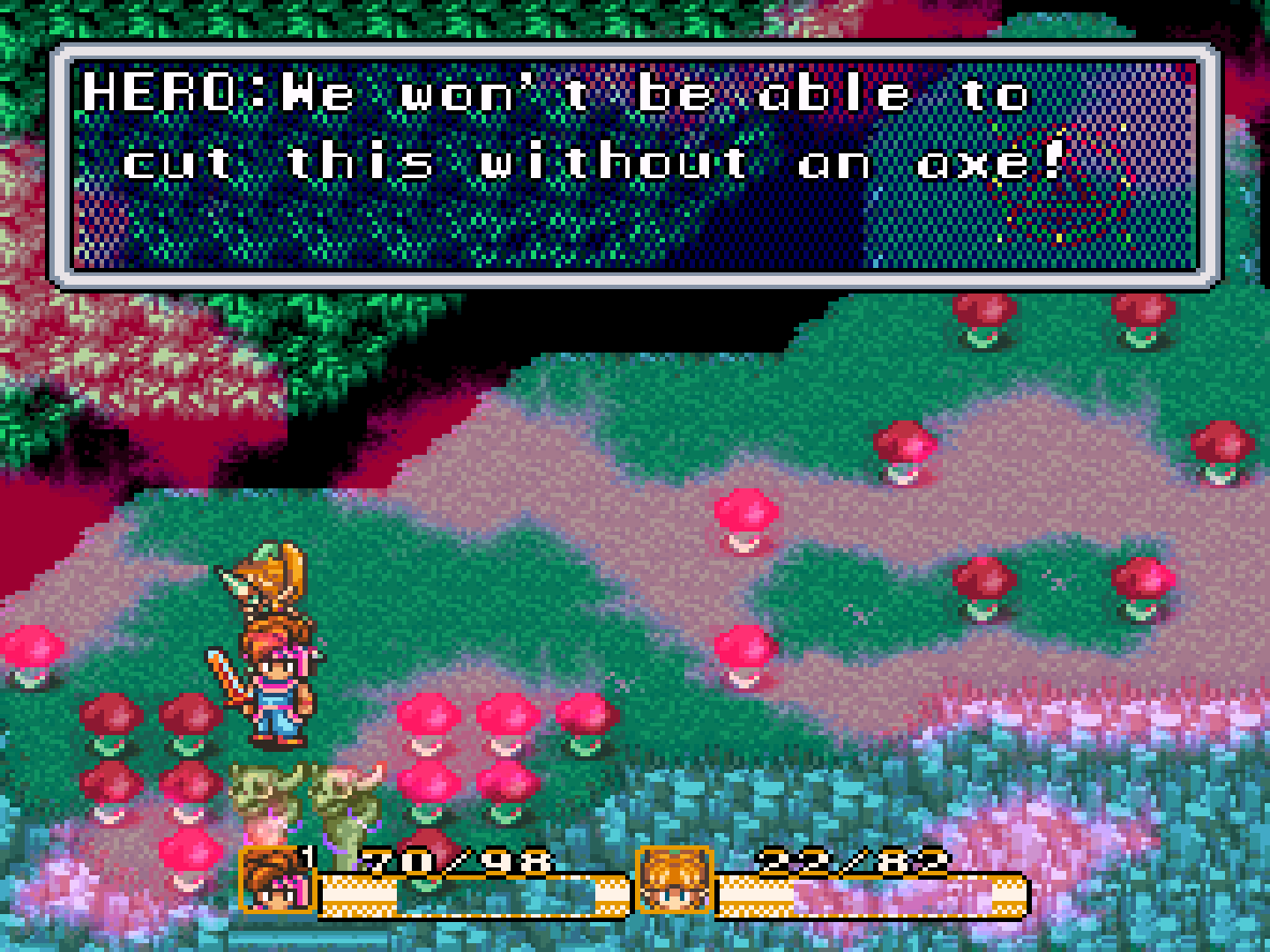 Pidge mentions that there's a blacksmith in Gaia's Navel who can craft axes, and suggests heading there in order to clear out the shrubbery.

I head east instead and fight off more Balloon casters and cute, but dangerous archers!

Next portal, where does it take us?

Oh no, an Eye Spy! It spawns more Chobin Hoods! 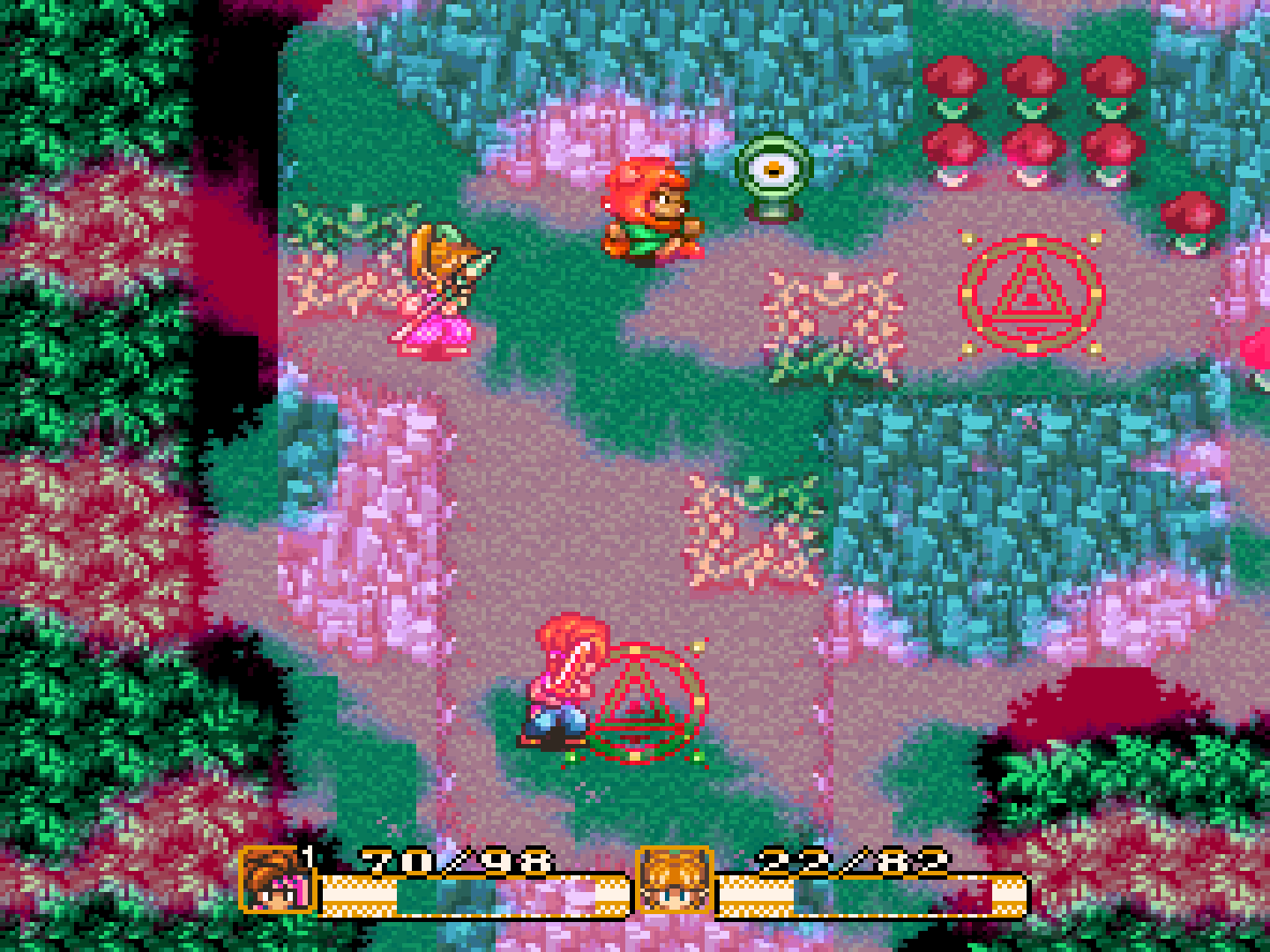 I give up and retreat.

I stop by Neko's to get more healing items, some new equipment, and save again.

Using a Candy to heal Pidge, I head straight back to face the Eye Spy and the Chobin Hoods...

Now that's the first time that's happened: Hero got turned into a moogle! 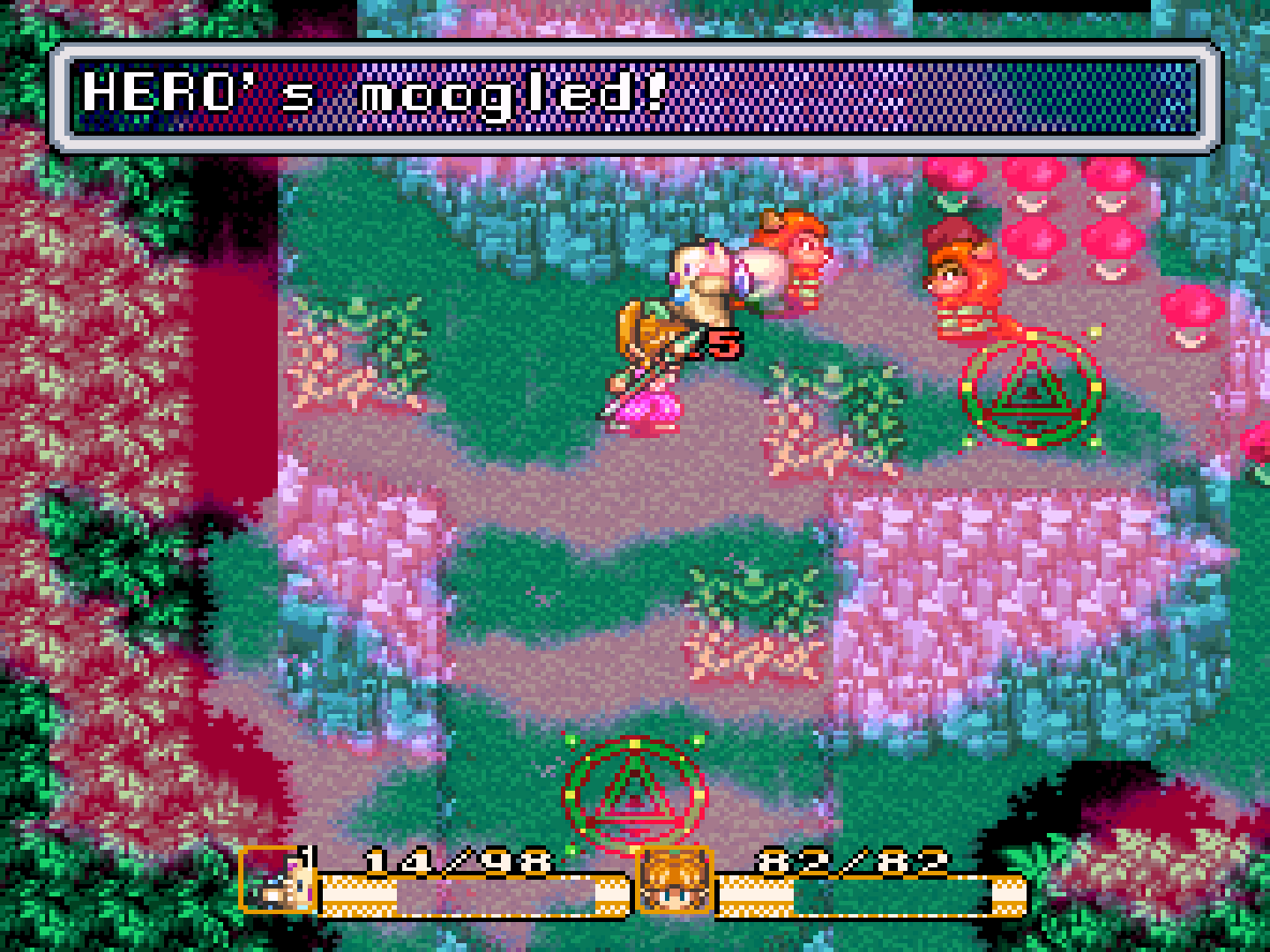 Unfortunately, thanks to those Chobin Hoods, Hero sees the reaper, and is now a spirit walking!

I revive him, and with stubborn determination, we finish off the Chobin Hoods and the Eye Spy spawner!

We cross into the next portal...but it doesn't take us to another area. Instead, it clears out the mushrooms, and creates more land atop the cliff! 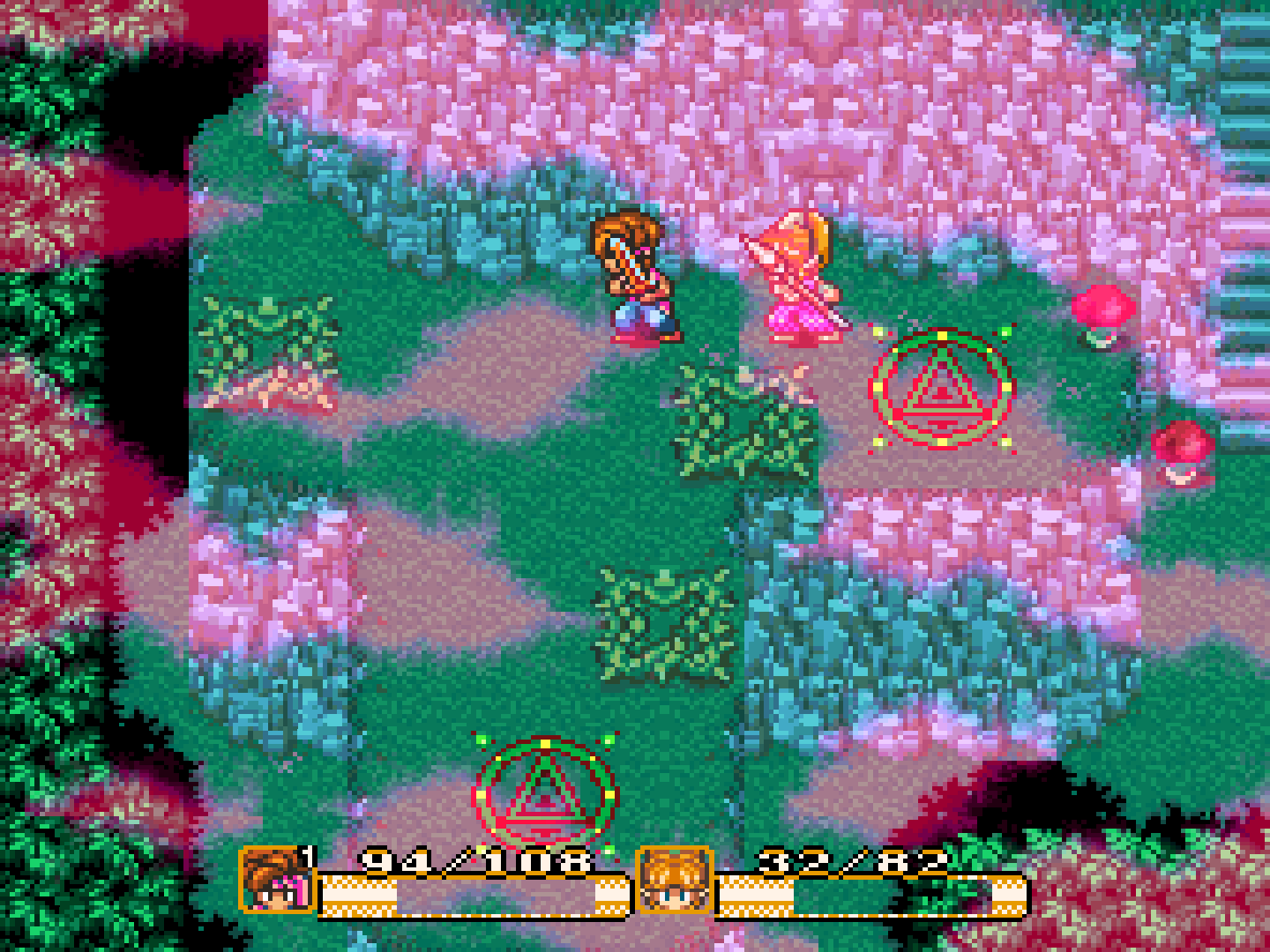 To get to the land bridge, though, we really need the axe from the blacksmith in Gaia's Navel...

I seriously need to be careful with attacking in this game! One missed attack, and I waste my character's energy, and then, I have to wait for full power while the other monster takes their turn! Plus, I have to keep in mind of the mushrooms in the way here...