Now our next mission is to head off to rescue Major Dyluck from the witch Elinee!

I wonder how Pidge fights, but so far, she's doing nothing.

By using the "Targeting" option, I now have her attack the Mushboom, but the monster's on the other side of the river!

We manage to cross the bridge and take care of the cute mushroom monster. Yay, teamwork!

We use the little yellow creature to bounce us up the cliff, saving us precious time.

Pidge also gets poisoned by the Lullabud here! I realize what the Magical Herb does, and use it on Pidge!

We manage to make it to Neko's inn. That was a quick trip!

Refreshed and ready, we take care of some more monsters and head off to the set of pillars near the Water Palace... 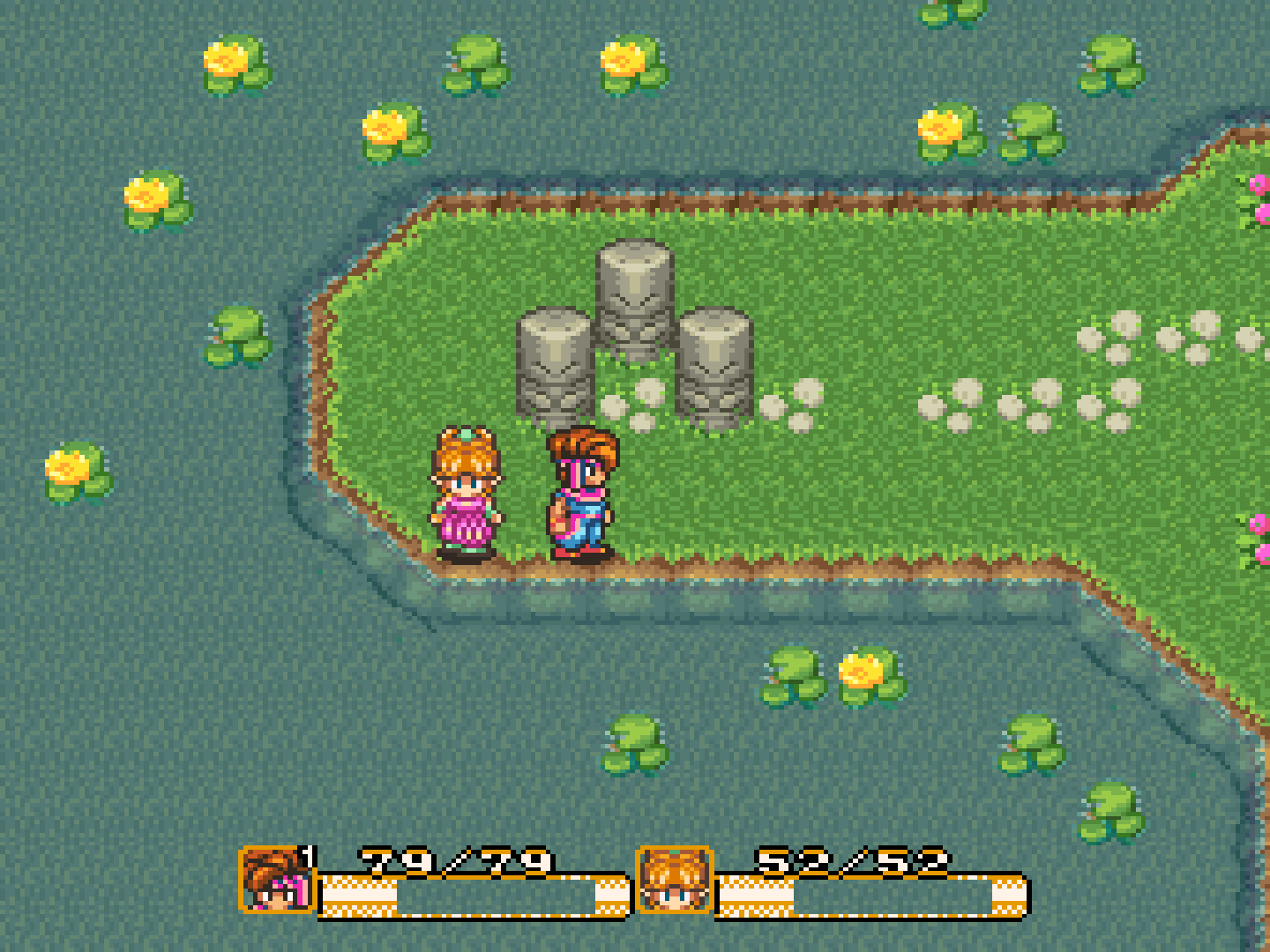 This is it, I think!

Entering the area inside the pillars now... 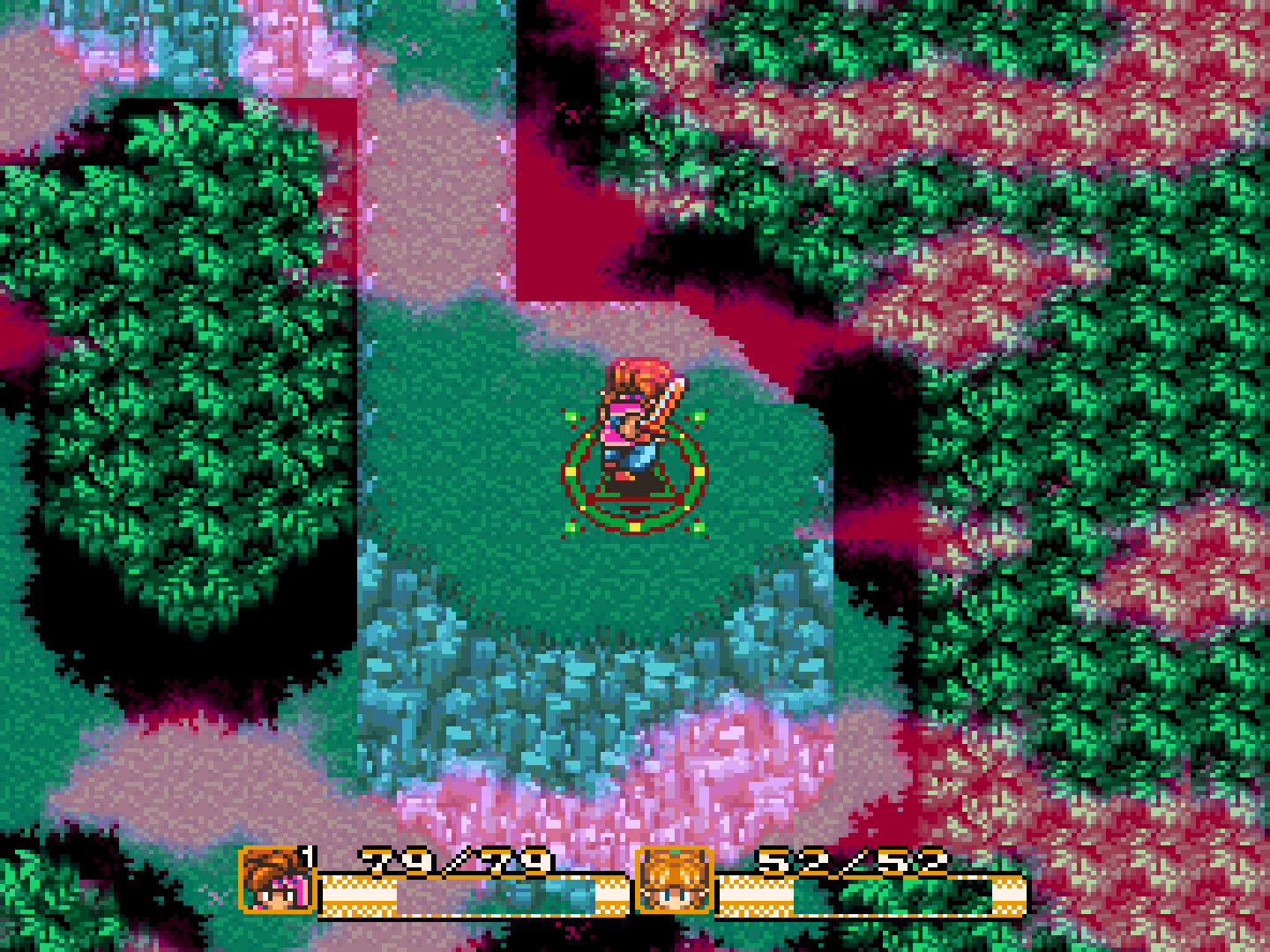 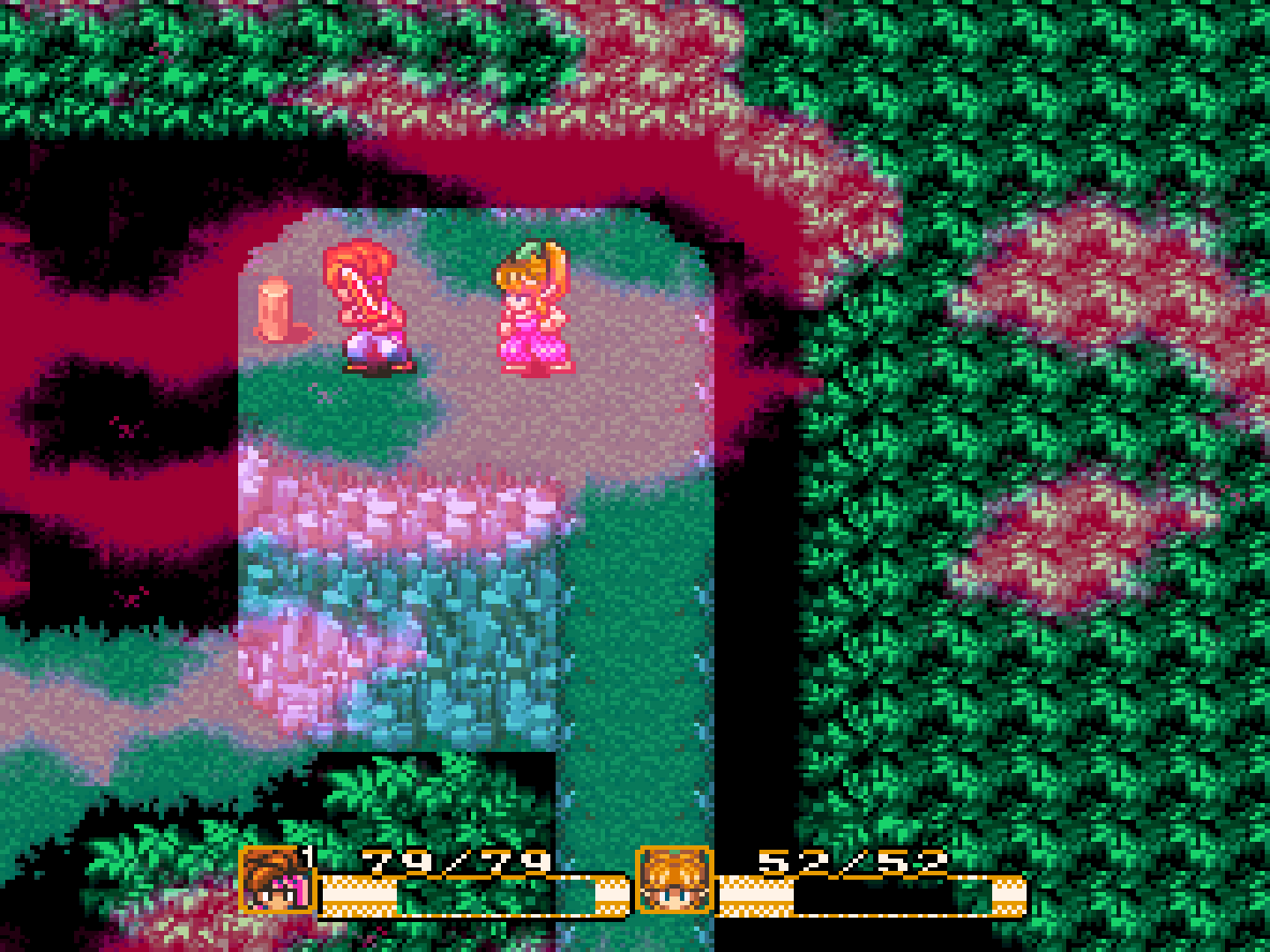 Unfortunately, we're stuck, since we need a rope of some kind to go to the other side. I notice on the other side, arrows are being fired at us!

With nowhere to go, I head to the Water Palace first, hopefully to get some advice from Luka.

She tells us the same thing: head for Gaia's Navel first.

We head back to Pandora.

On the way, we build our strength as we take care of more monsters...

After fixing Pidge's Action Grid a bit, she can now attack the enemy without me targeting!

As Hero gets KO'd temporarily, Pidge keeps fighting the Mushbooms!

Back at Pandora! Now, let's see where the south gate is... 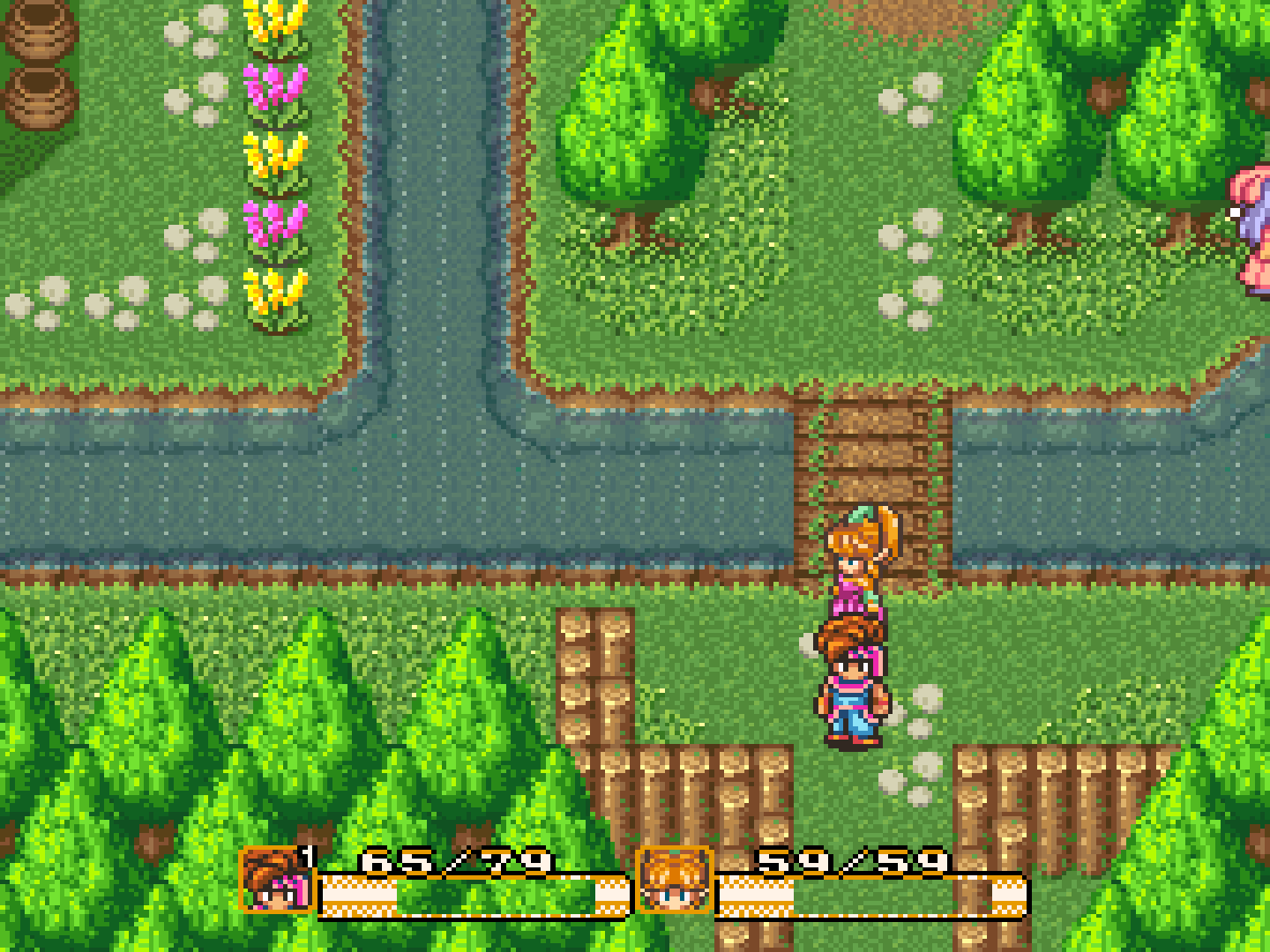 We're now near the ruins, where a statue greets us. 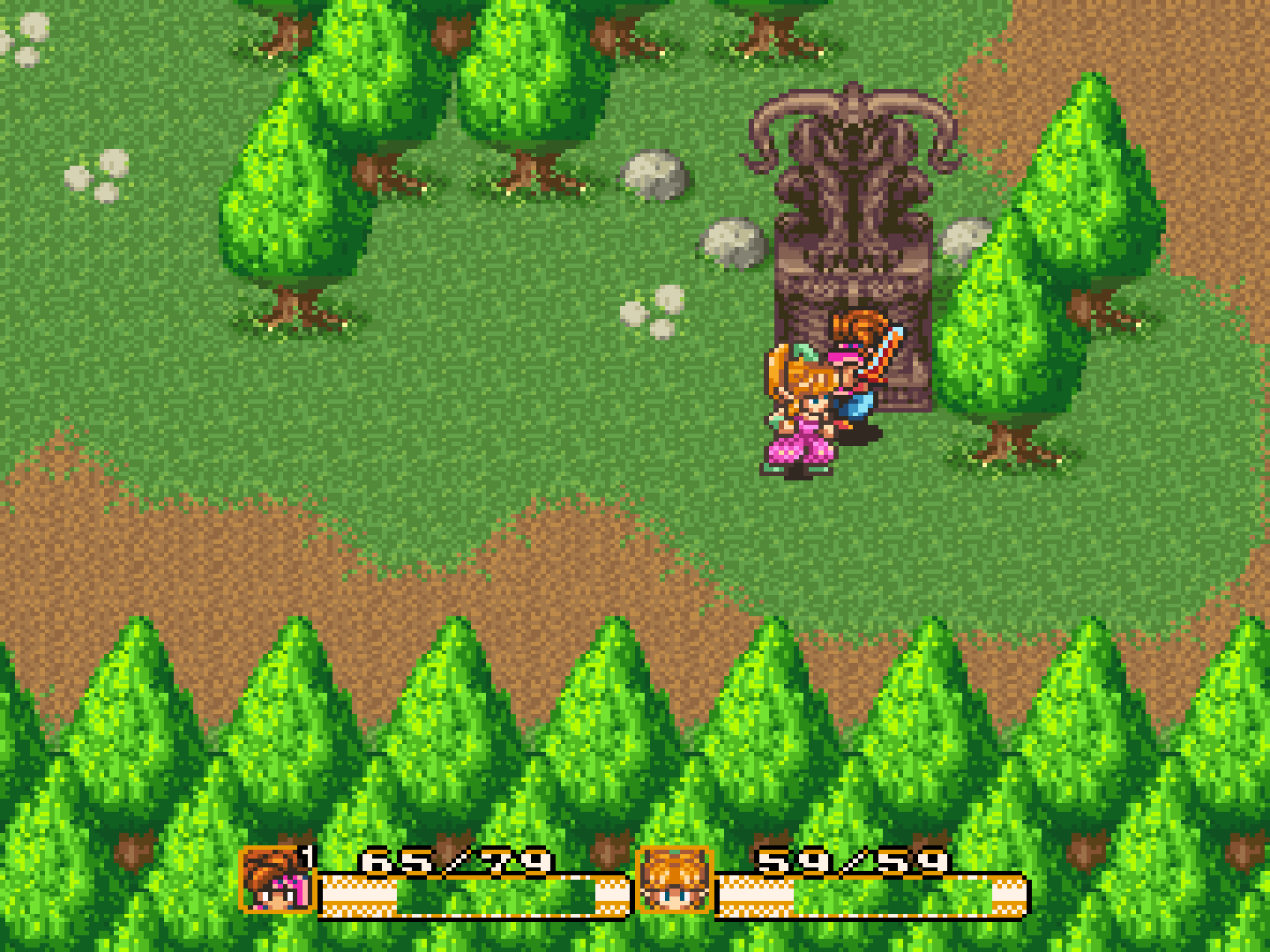 Into the dry ruins, where we see people wander about aimlessly, none of them wanting to talk. 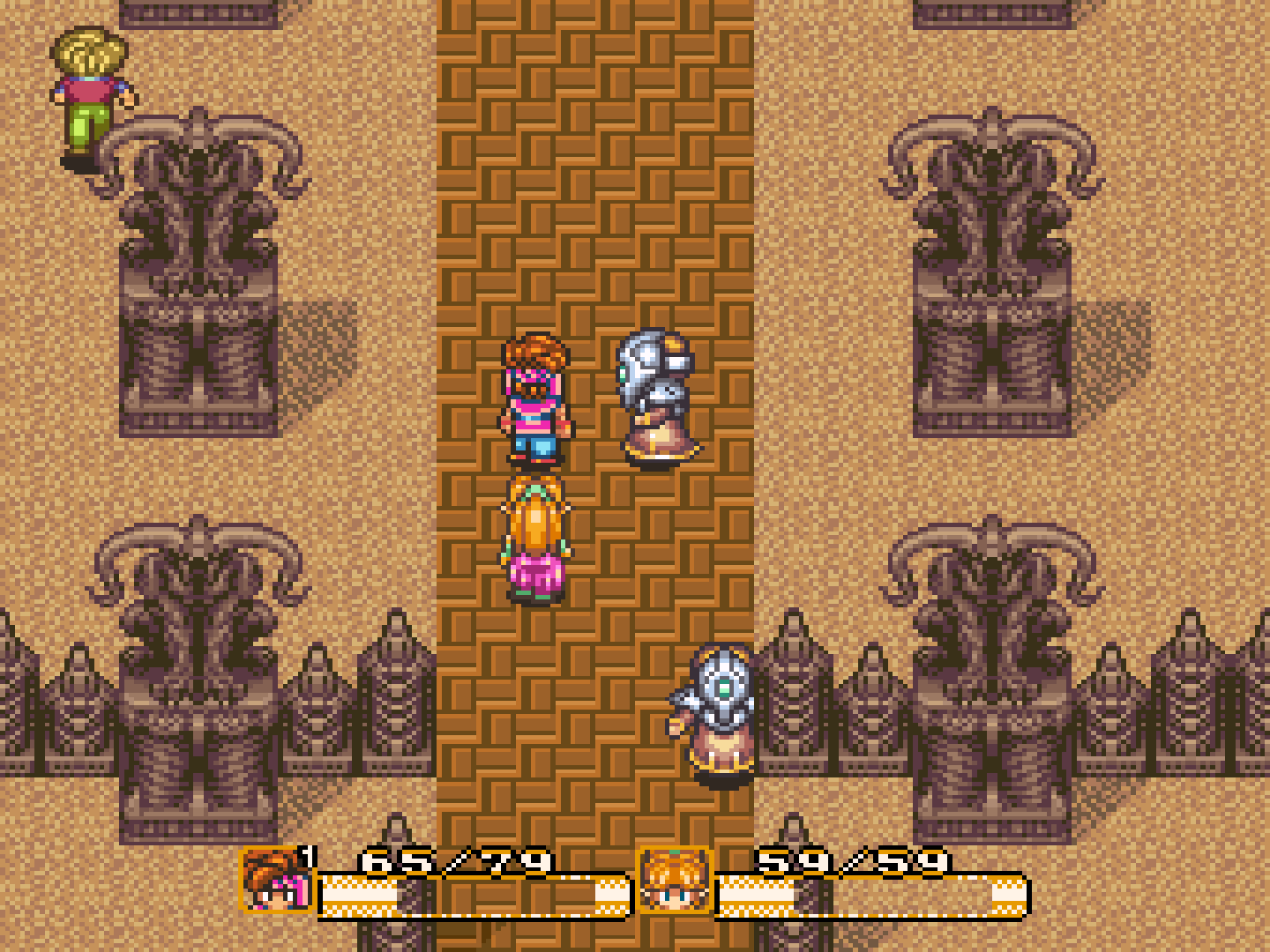 The architecture looks pretty stark, like it's a bit out of place for this game, but at the same time, it feels naturally in place for some reason. I don't know what I'm writing about at this point. 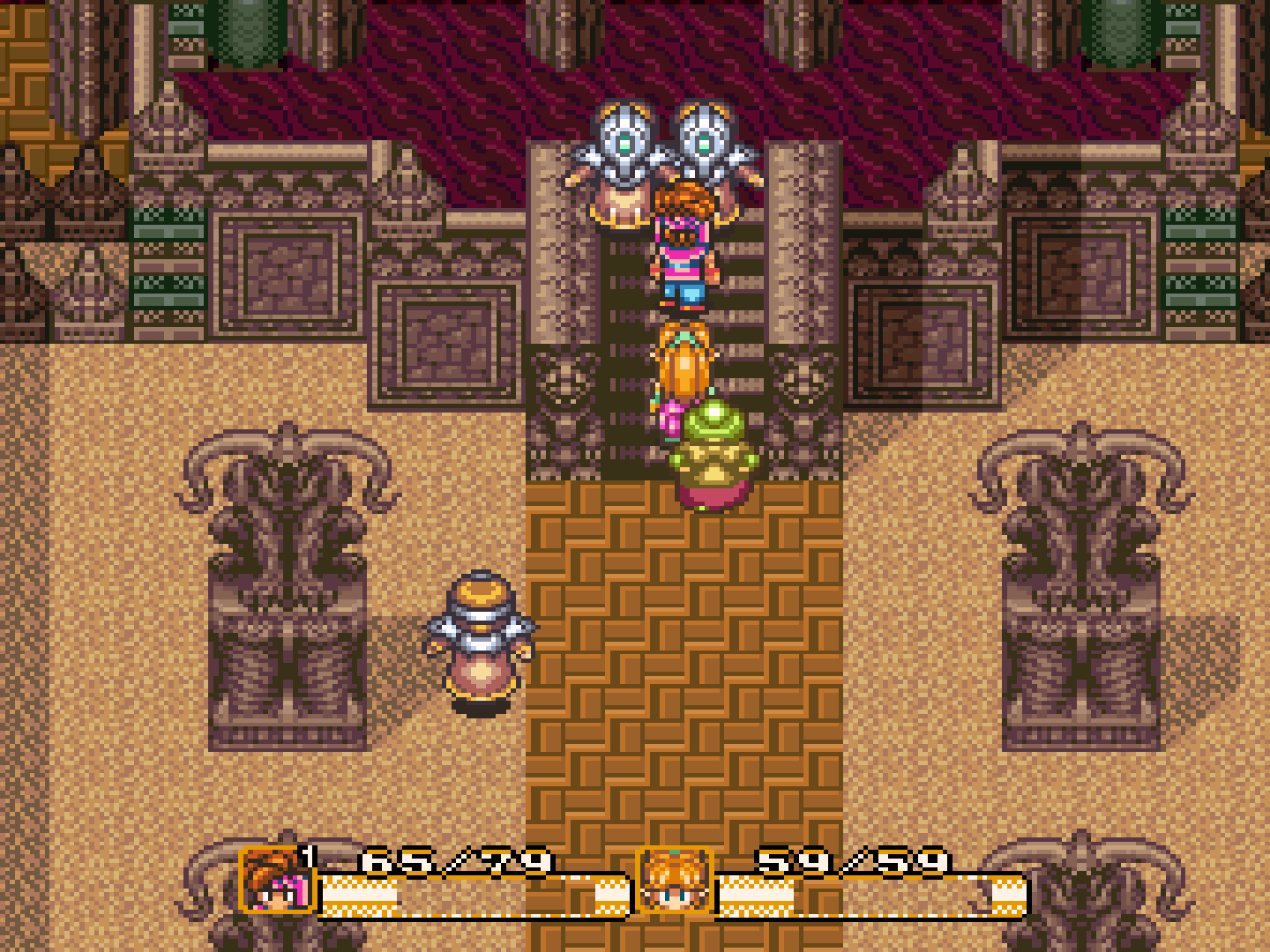 Now where to head to next?

After buying another herb, I have the party head out to the west exit. 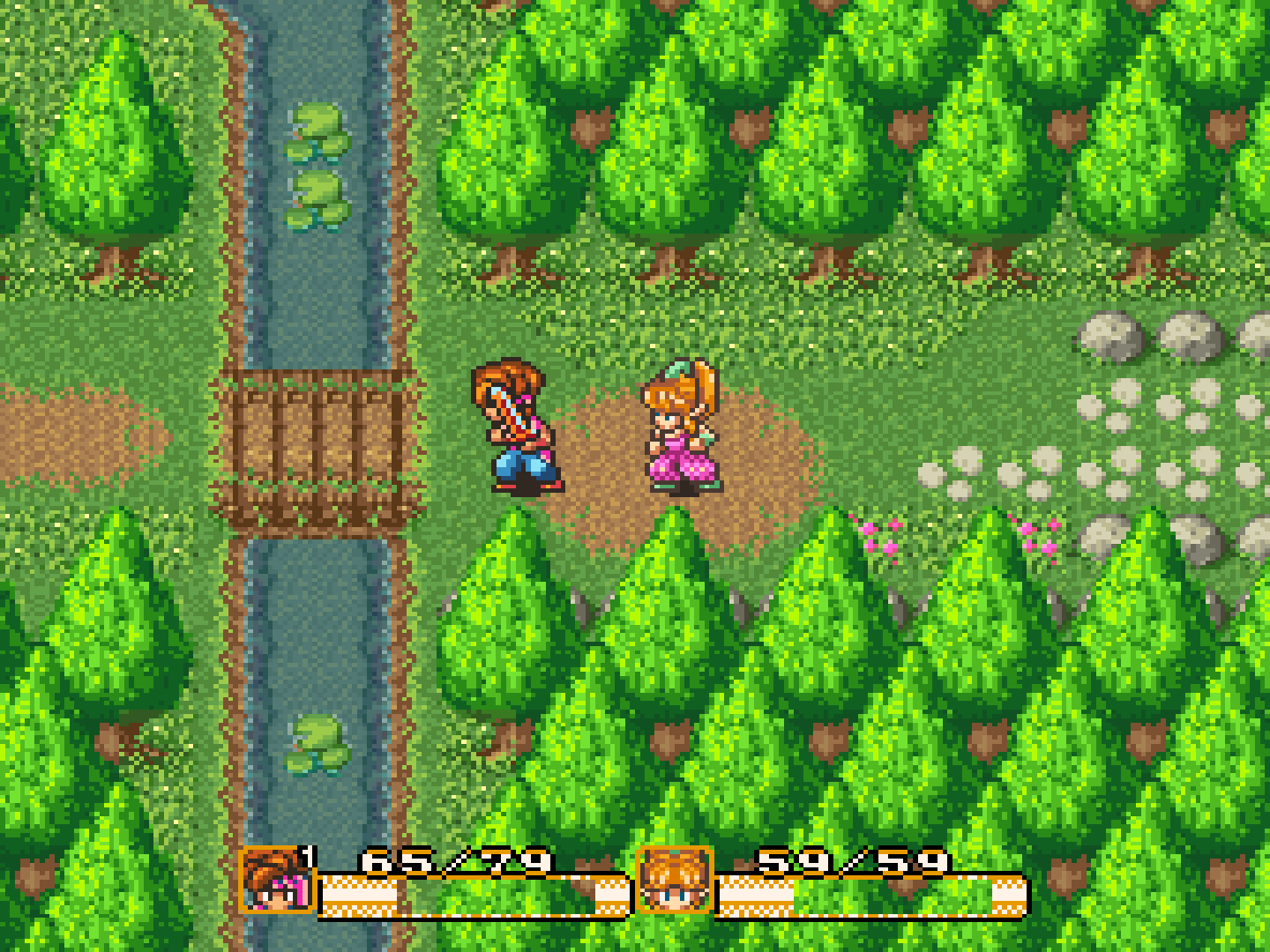 There's another new monster in town, and it's a flying one: a Buzz Bee!

Pidge's weapons level up, and for some reason, a sound effect that sounds familiar to me plays.

Oh my god, what are you doing, Pidge? Stop hitting the rock! You're getting injured!

We head further west, where we're now at a grassy meadow filled with tall rocks, and tons of monsters... 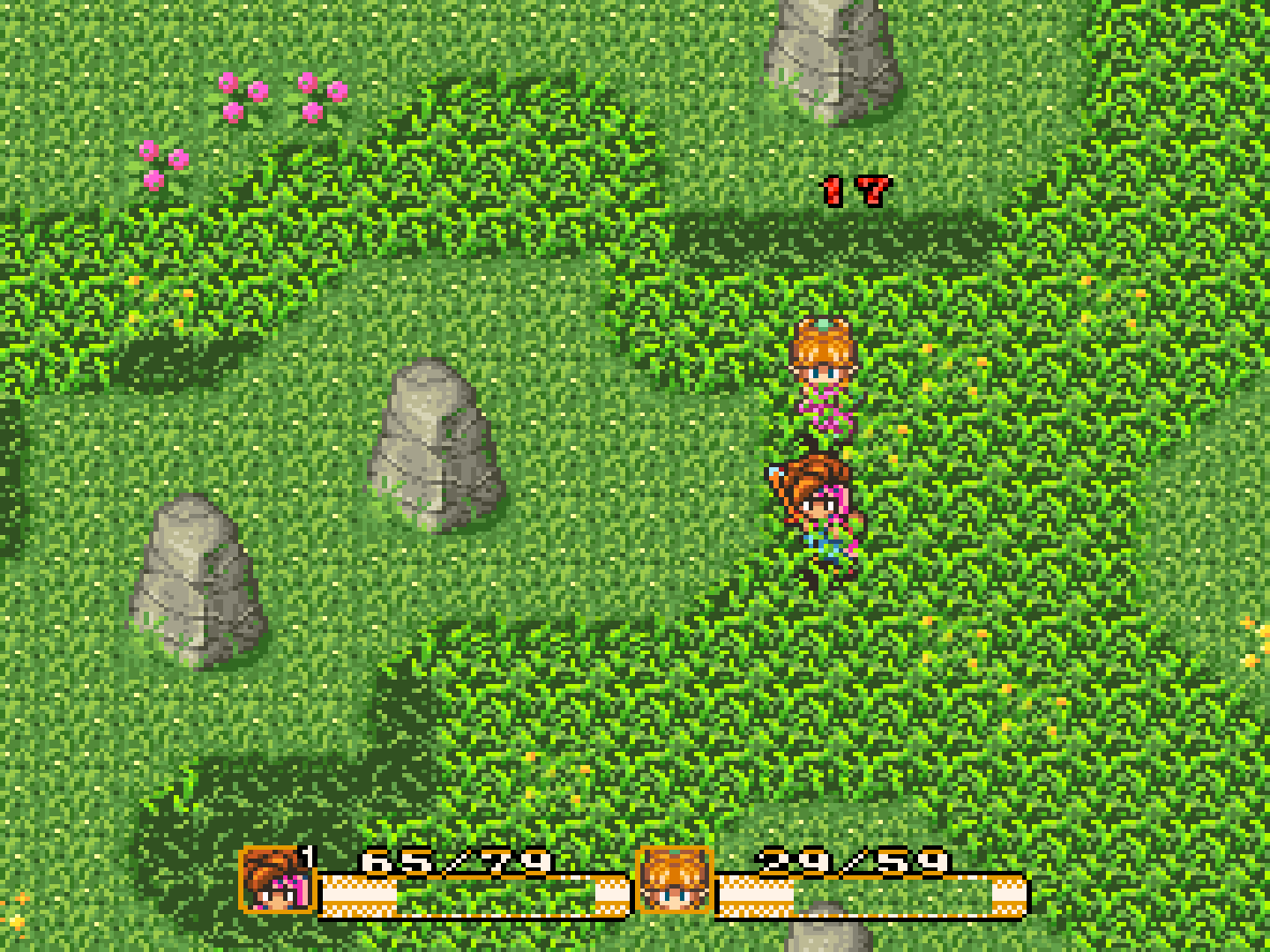 I adjust the action grid to ensure that Pidge is a bit more careful when attacking monsters this time...

And a Lullabud and a Buzz Bee give us more of a hard time, as the Bee's also a poisoner!

I seem to be getting the hang of how the battle system works! 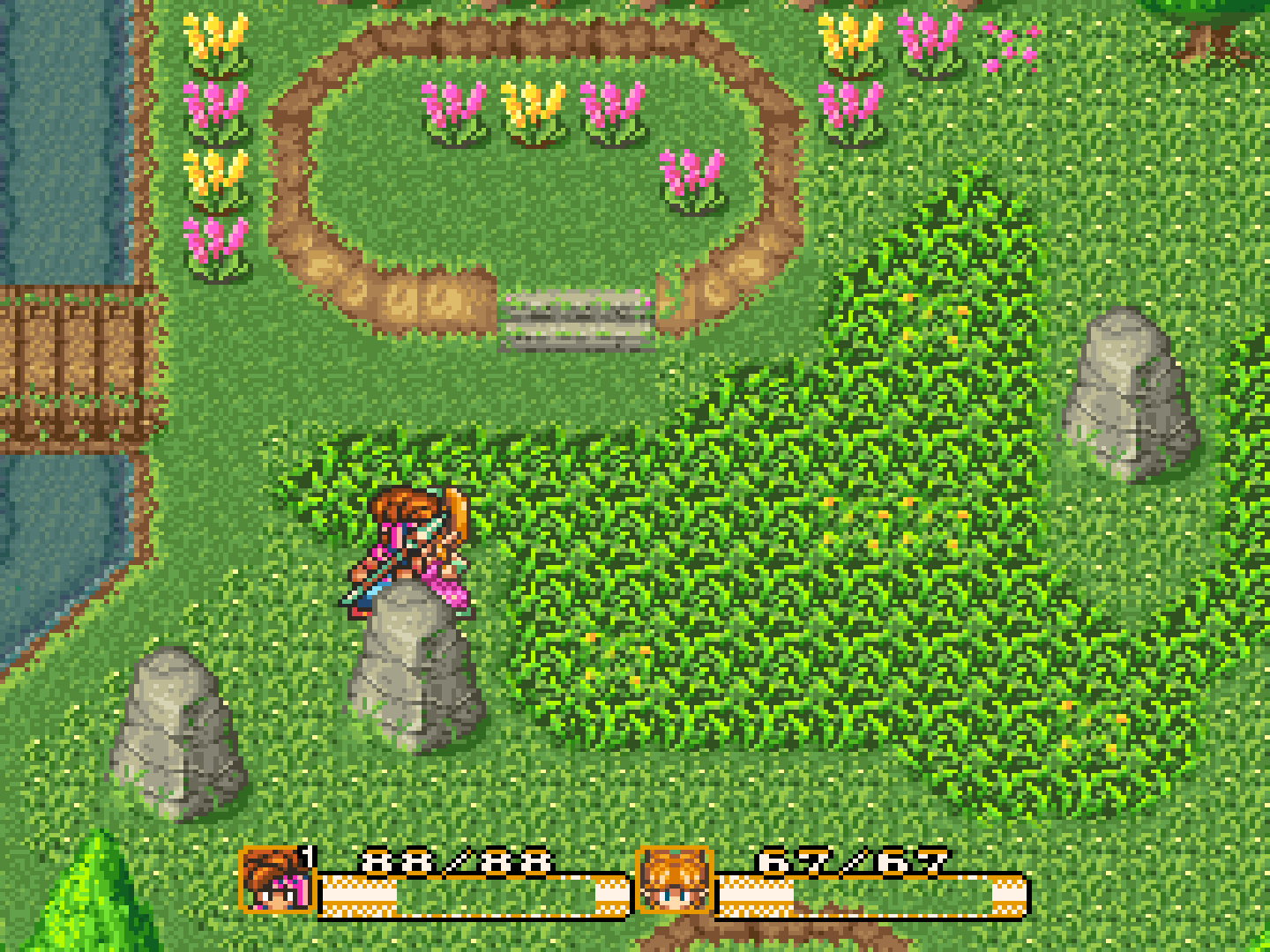 After more fights with Rabites and Mushbooms in more grassy meadows, I read the nearest sign...it seems we're close to our destination! 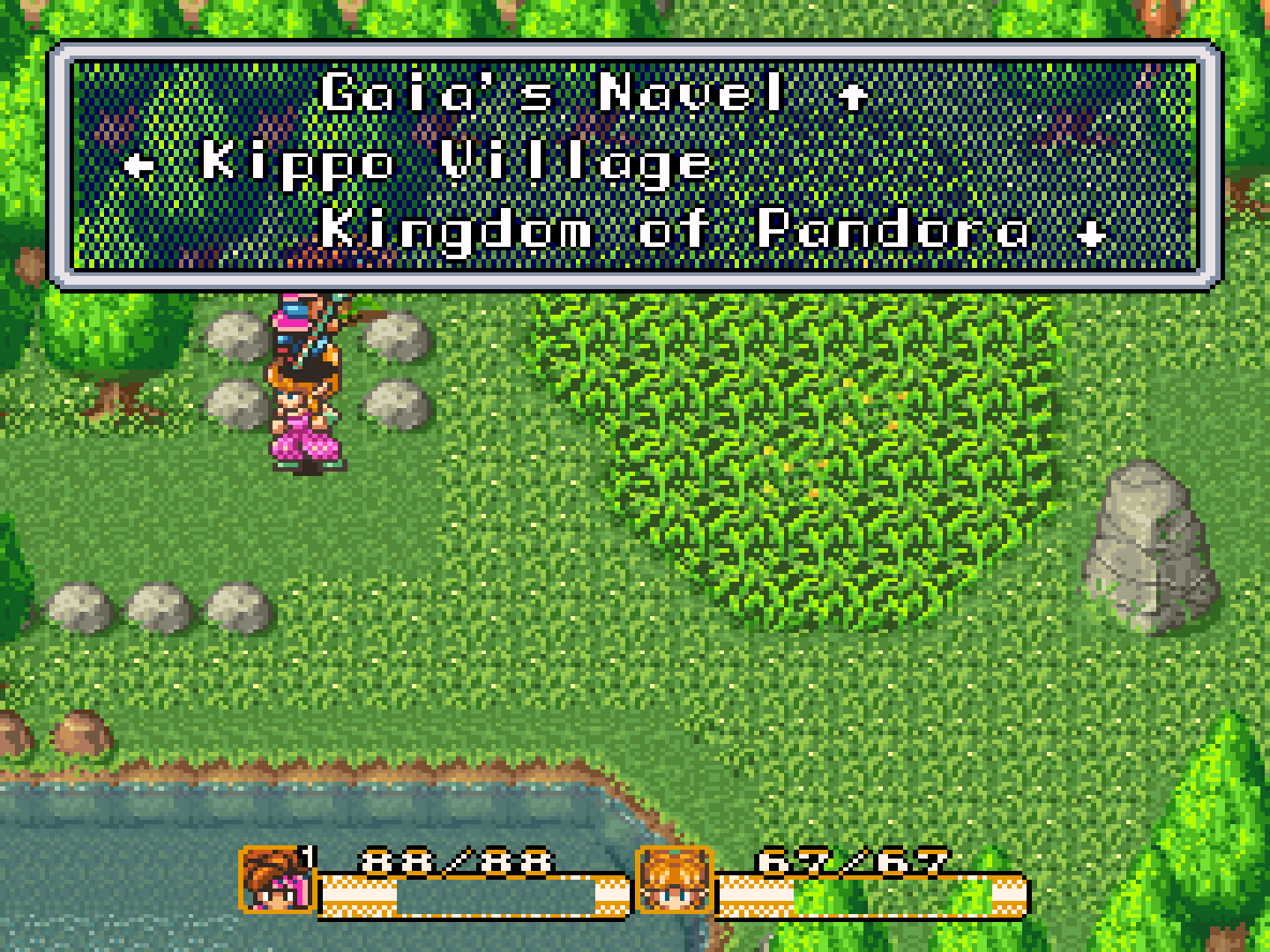 I have our heroes head up north to Gaia's Navel.

Or not, as we cross into more flowers and blossoms along the way, along with more Buzz Bees and Lullabuds.

I have Hero try to flee from the fliers, until we stop at the edge of the cliffside.

Moving forward, we read another sign, where Gaia's Navel is south, and a Haunted Forest is up north.

We then take care of another Buzz Bee and Lullabud climbing up the stairs!

East near a waterfall, and more Buzz Bees appear! Aaaaaajfksjfajsljwrjfn!!!

I have Hero and Pidge climb down, where more Buzz Bees come, but they can't attack us since they're either above or below us!

Now at the falls...which waterfall should I head into? The west or the east? 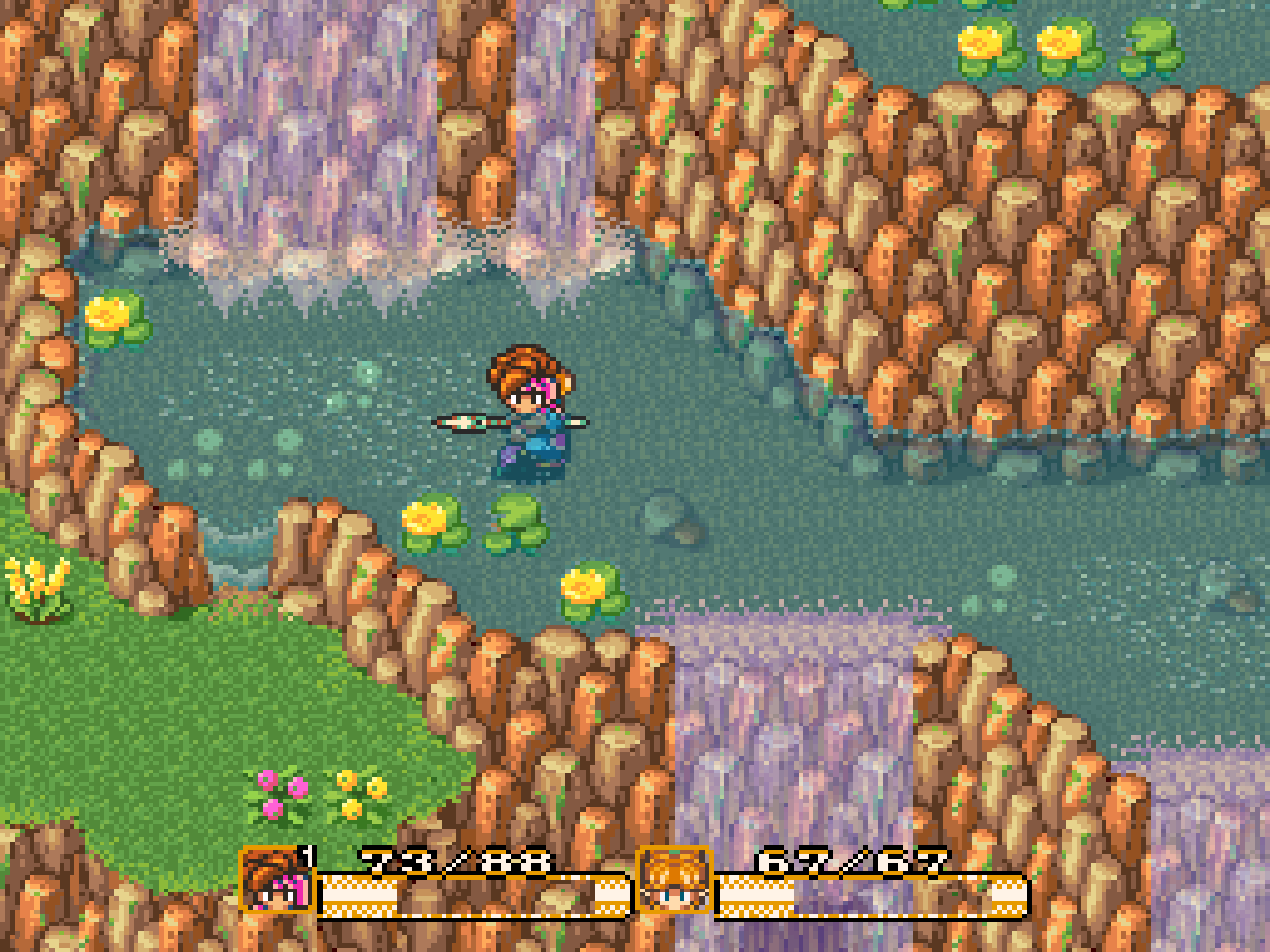 But I can't jump there, and instead, head west to solid ground again, as more Buzz Bees ambush me!

I turn back, trying to figure out where the entrance to Gaia's Navel is...

I cross over to the falls east of where I read the Haunted Forest sign.

After more battles, we're now in a log bridge of sorts... 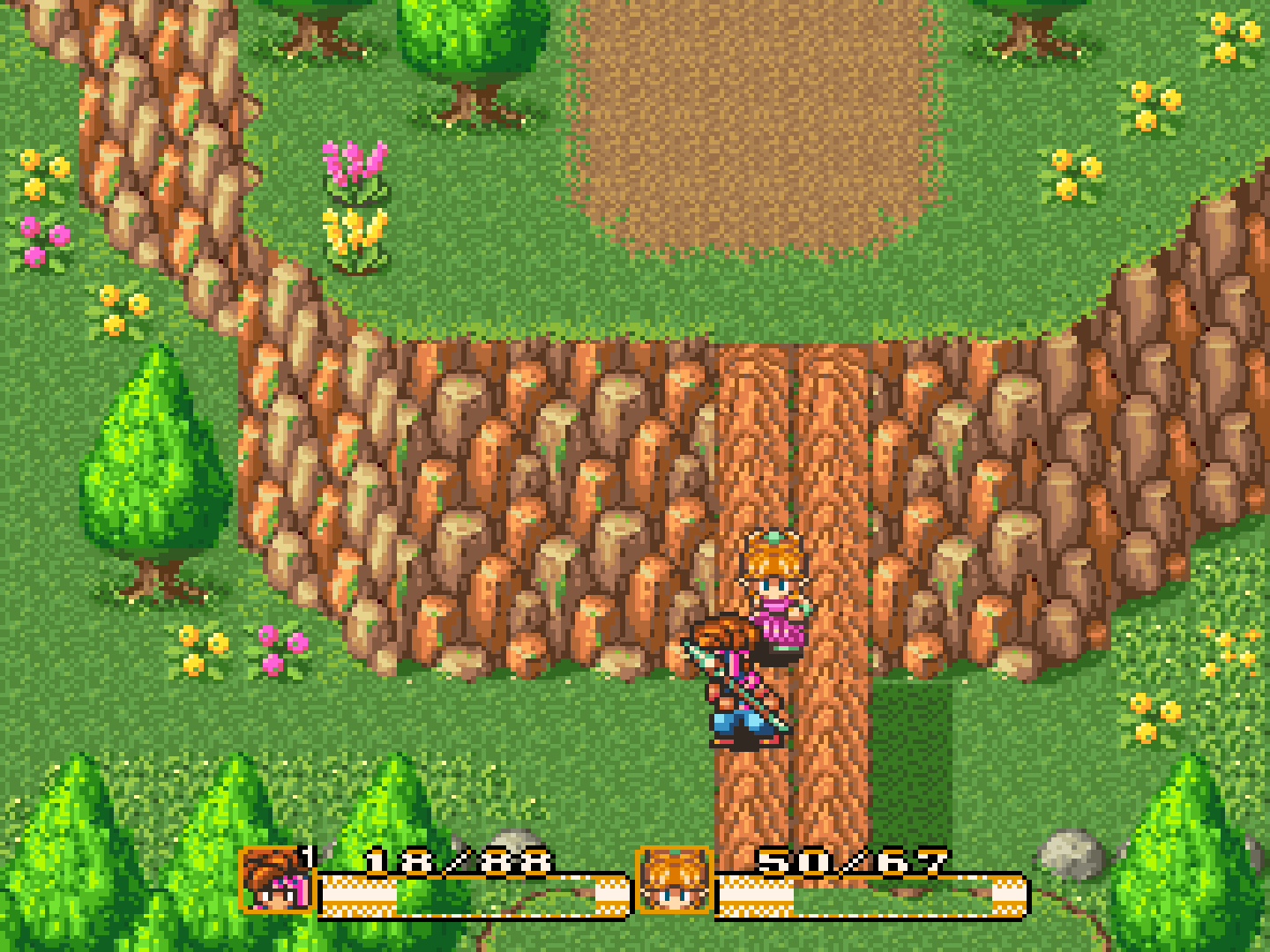 Crossing that, it looks like we're now back at the start of the area!

After a Lullabud ambush, Hero's low on health! I use up another Candy...

We make our way back down through the falls and push back the Buzz Bee brigade...

Now which way is Gaia's Navel? 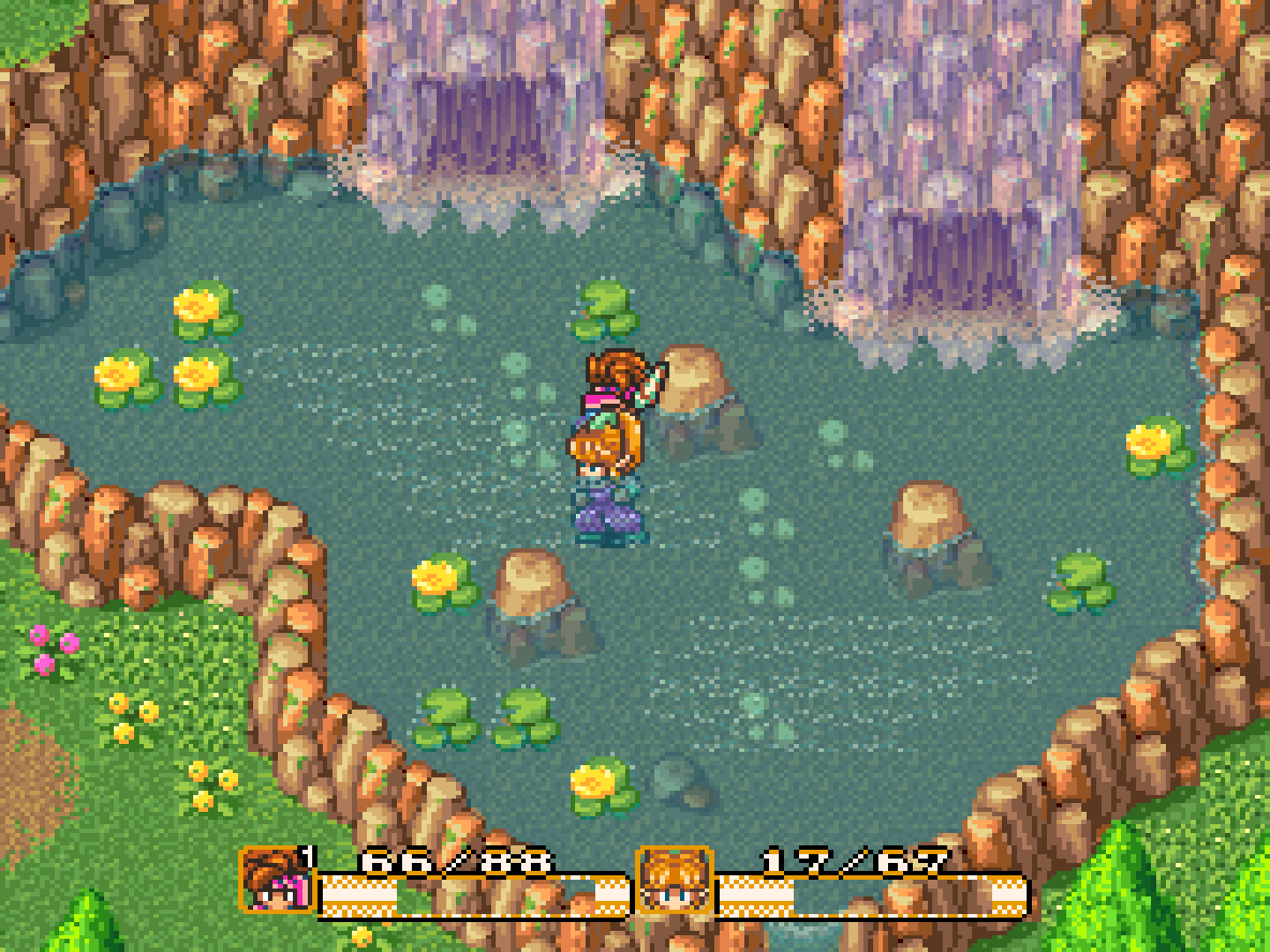 I take the left entrance this time...

I also have Pidge equip the Sword.