The guard wandering by the gates welcomes us, and tells Hero that he has orders to let Hero pass into the town. Thank you, Jema. 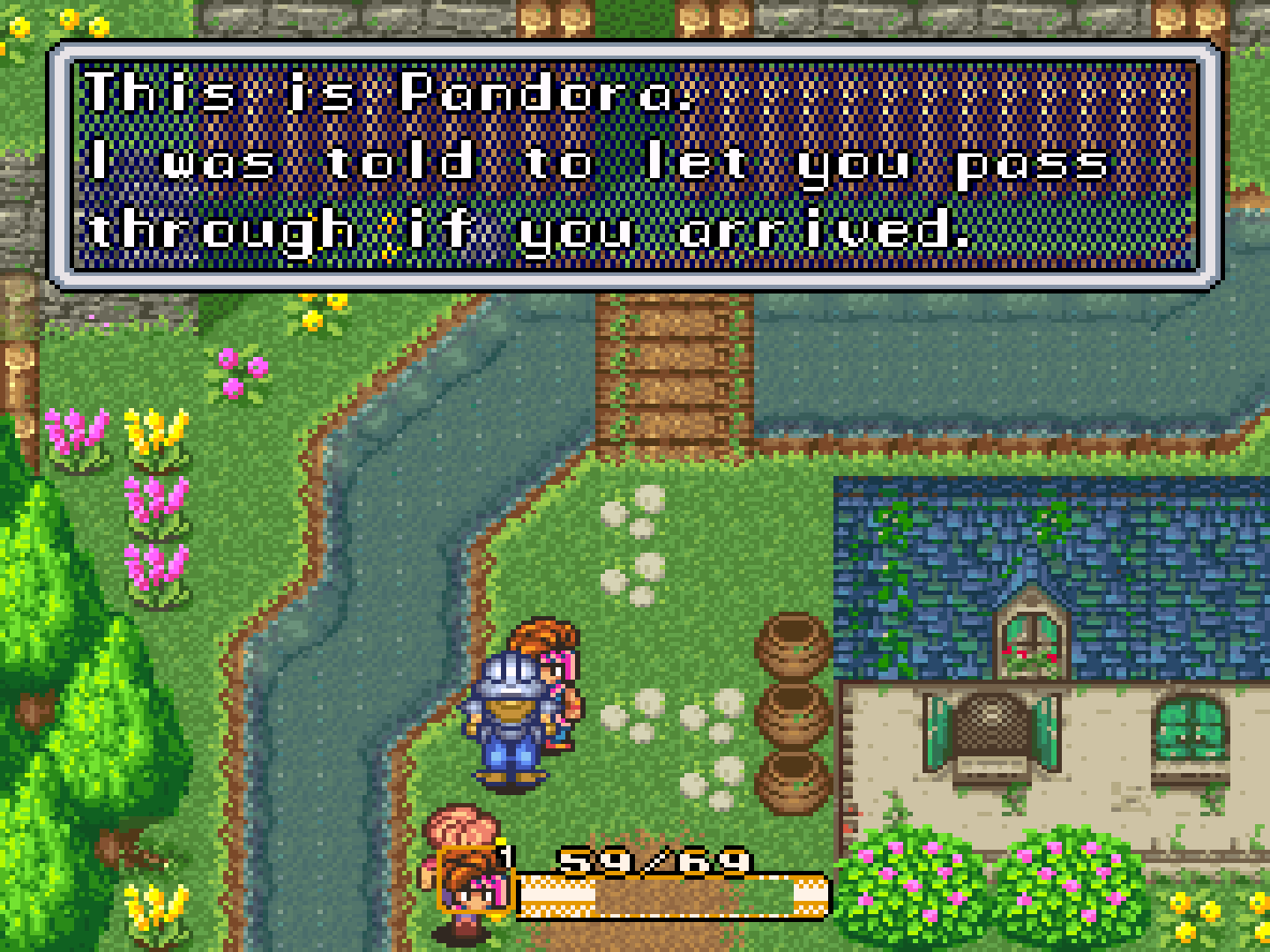 The guard calls Jema by his title: Sir Jema of Tasnica, and says he's with the King. He also advises Hero not to talk to anyone in town. But why?

I head to the nearby inn. The dancing innkeeper says Hero can help himself to a bed, but before Hero could run there, he stops him and asks for 10 gold. I like that little detail.

After saving, I check out the wares in the item shop. The shopkeeper says he doesn't have that much.

A Kung Fu Suit, and a Hair Ribbon are the new things.

I also check up on the weapon stats and Hero's stats. 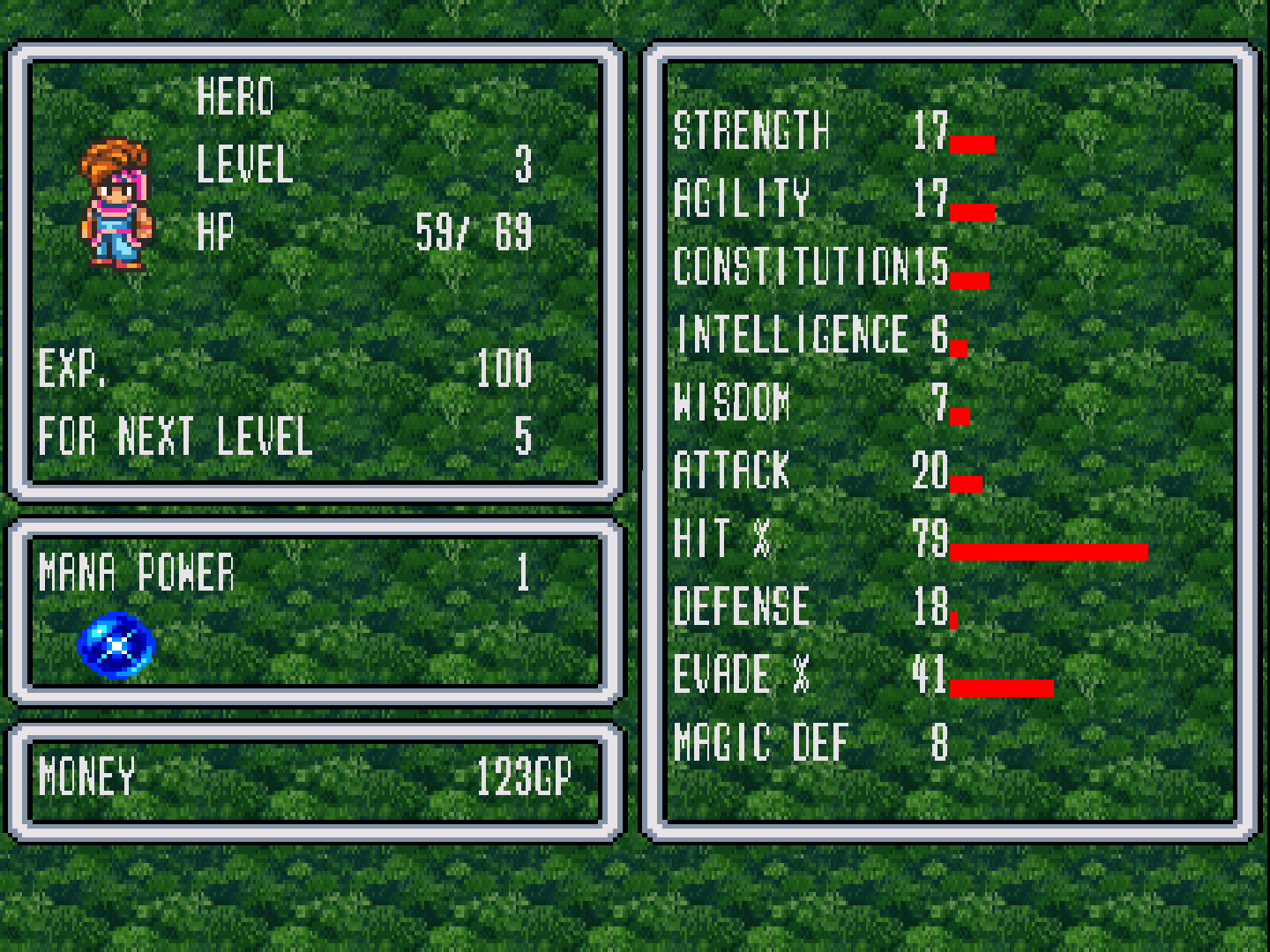 Hmmm, I wonder what the blue orb means? Is it the power from the Mana Seed that we retrieved from the Water Palace?

I go into a house, where a middle-aged man and grandmother live. Grandma won't say a word.

Upstairs, the blue-haired daughter mentions something occurring in the ruins south of town. She mentions her grandma goes there...

In another house south of the one we exited, a maid tells us that her master and his daughter are prepping for an arranged marriage. Hmmm....

I accidentally run to the west bridge, which is the exit to somewhere.

A blond mustached man asks why we're talking to him. It feels like he's hiding something for some reason.

He has a well-stocked kitchen, though.

Most of the townsfolk in Pandora are...a pretty quiet bunch. 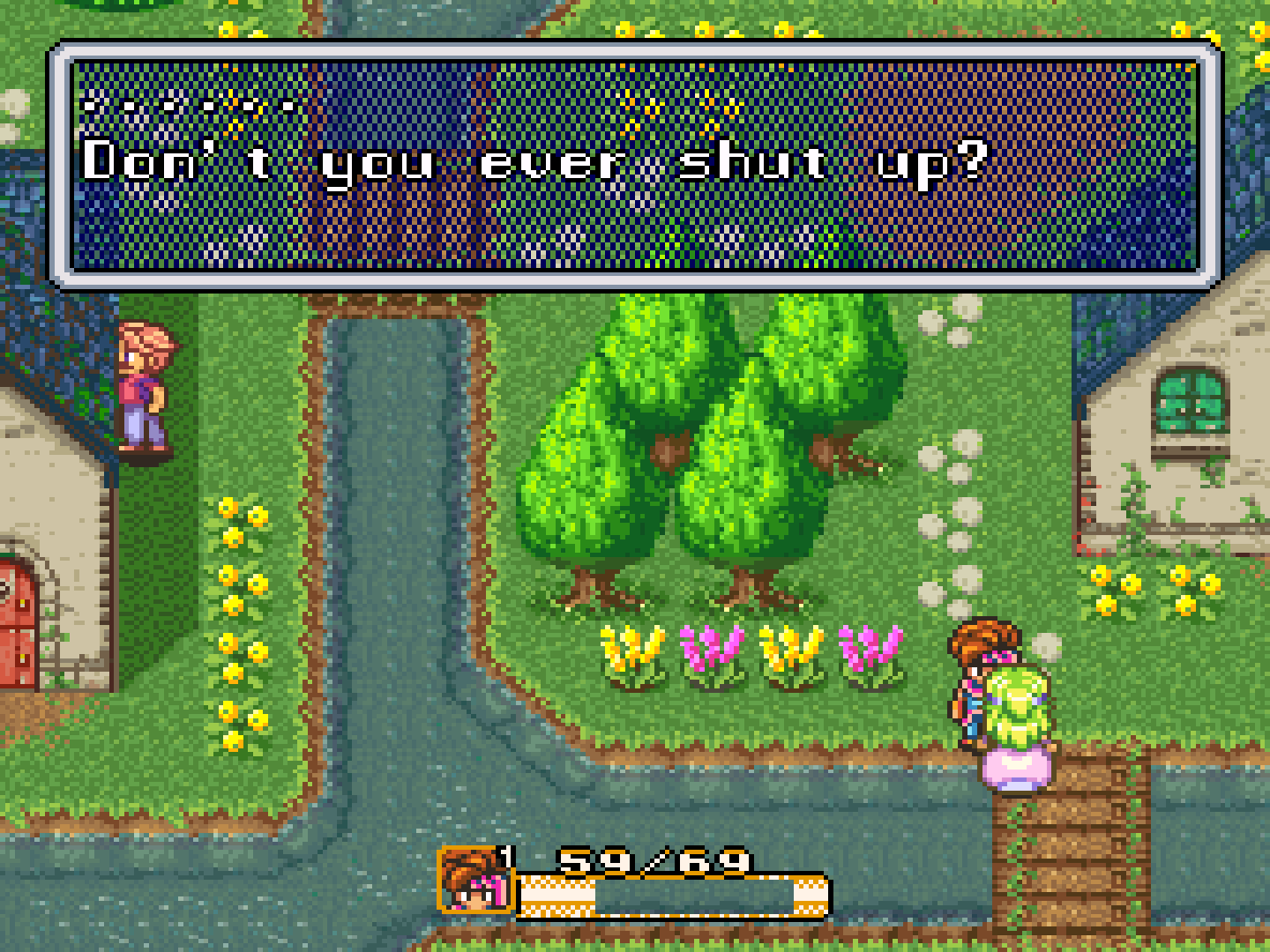 North of the bridge here and the gate beyond lies Pandora's castle. 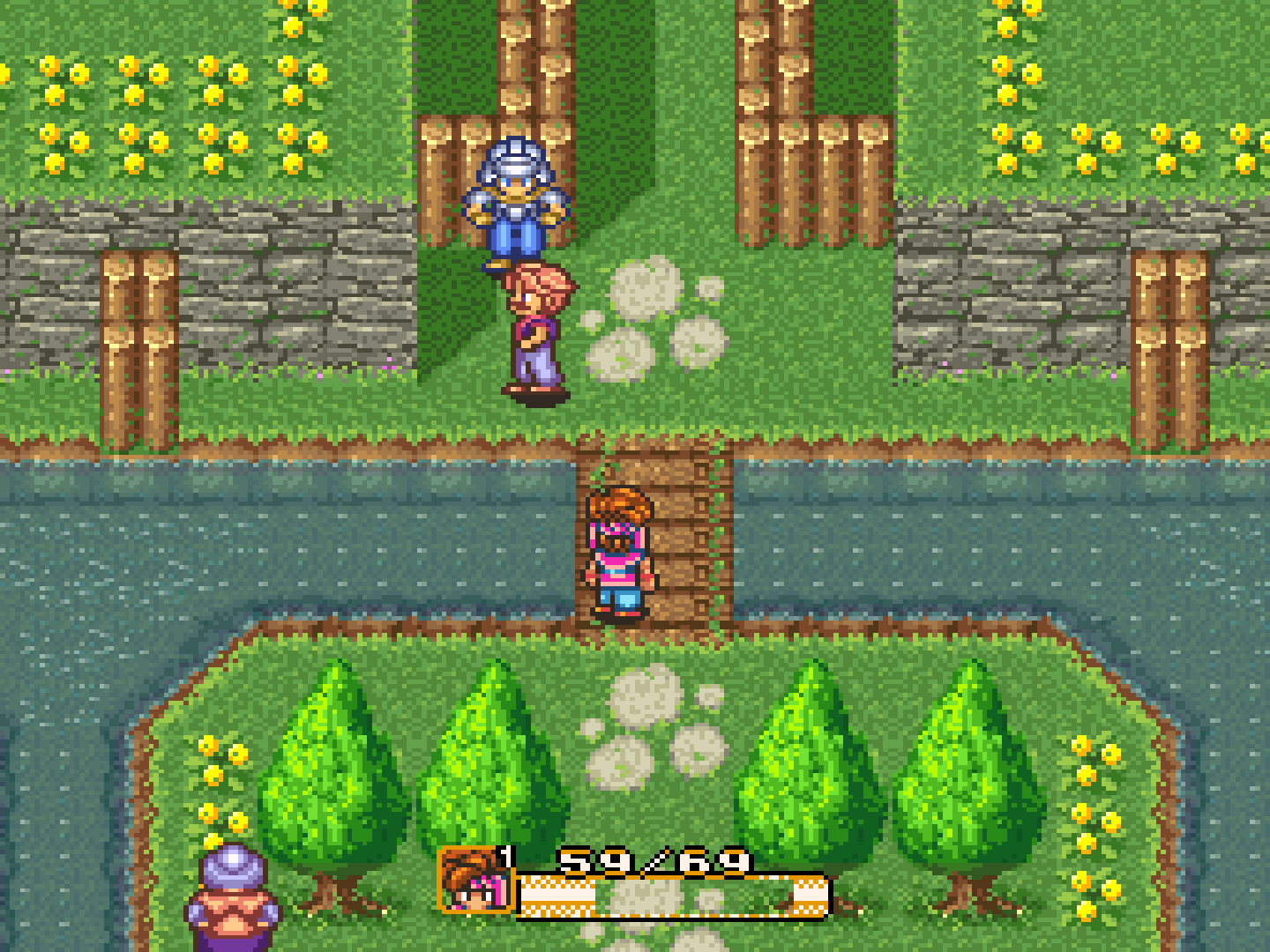 There's an armor shop south of the gates, but the shopkeeper's also quiet too...

In the house south of the armor shop, the children asks for Hero's help, worried about their parents. The parents are not talking either. What's going on?

Only the elderly woman near the gate to the castle can talk, and says that it's like everyone's "lost their will to live!"

I now have Hero head north to the castle. 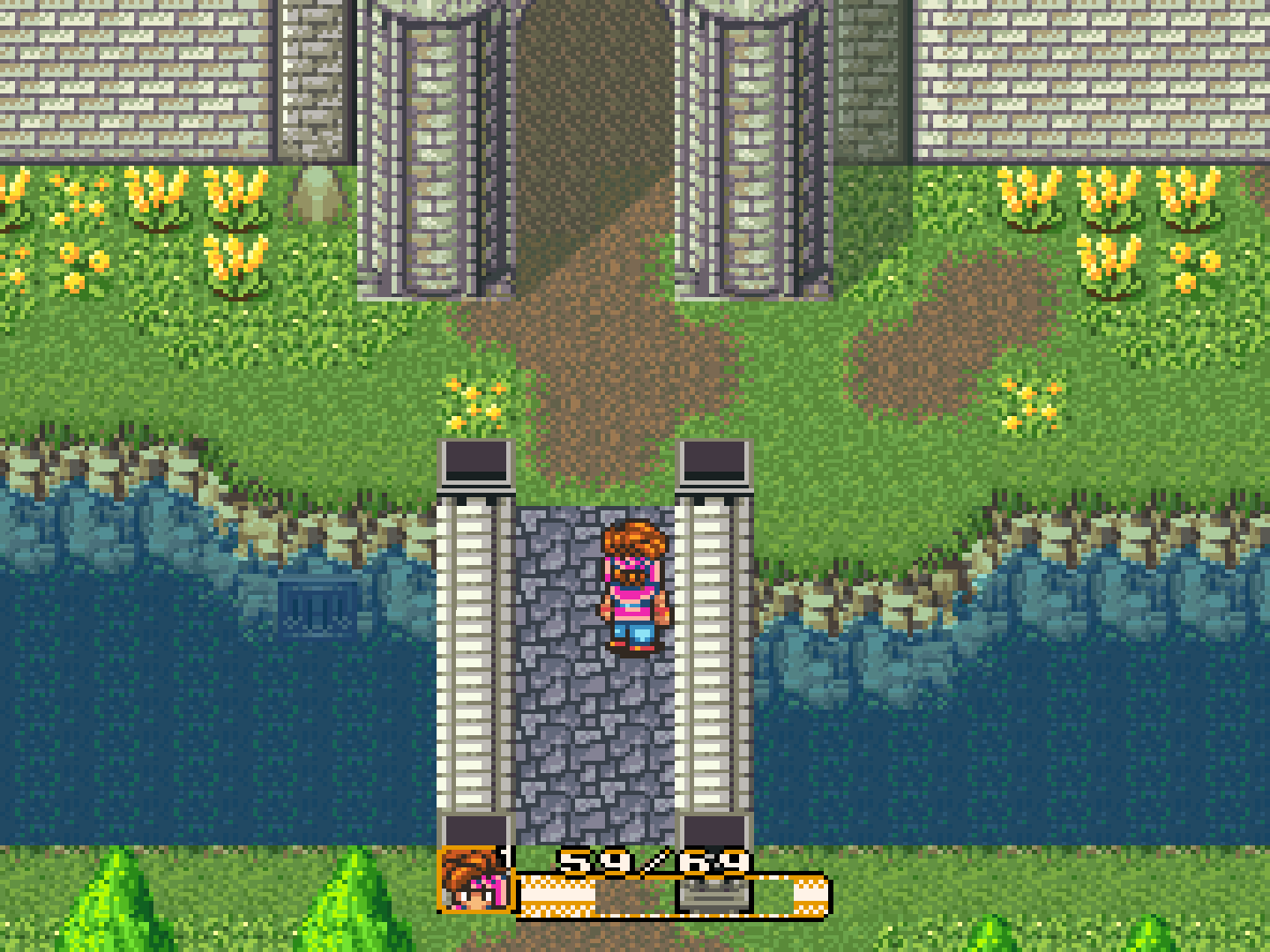 At the main gates now...

I have Hero check around the walls of the castle. No guards patrolling.

At the front door, we enter inside and check around for more info. There's one child who wonders when Major Dyluck will return, another person who asks us if we've seen the Mana Tree, and another who mentions that the Empire attacked Pandora 15 years ago...

The maid mentions people wearing strange masks in the ruins south of the kingdom...

I can also push people around in this game.

One guard thinks the townspeople acting quiet is a result of the witch north of the kingdom. Maybe that's why Major Dyluck left the kingdom to head north, to take care of the witch there...

One man says that the witch has cursed the land...

Sir Elman, a local knight, has set up an arranged marriage for his daughter.

Upstairs, we meet the girl who rescued us from the goblins! 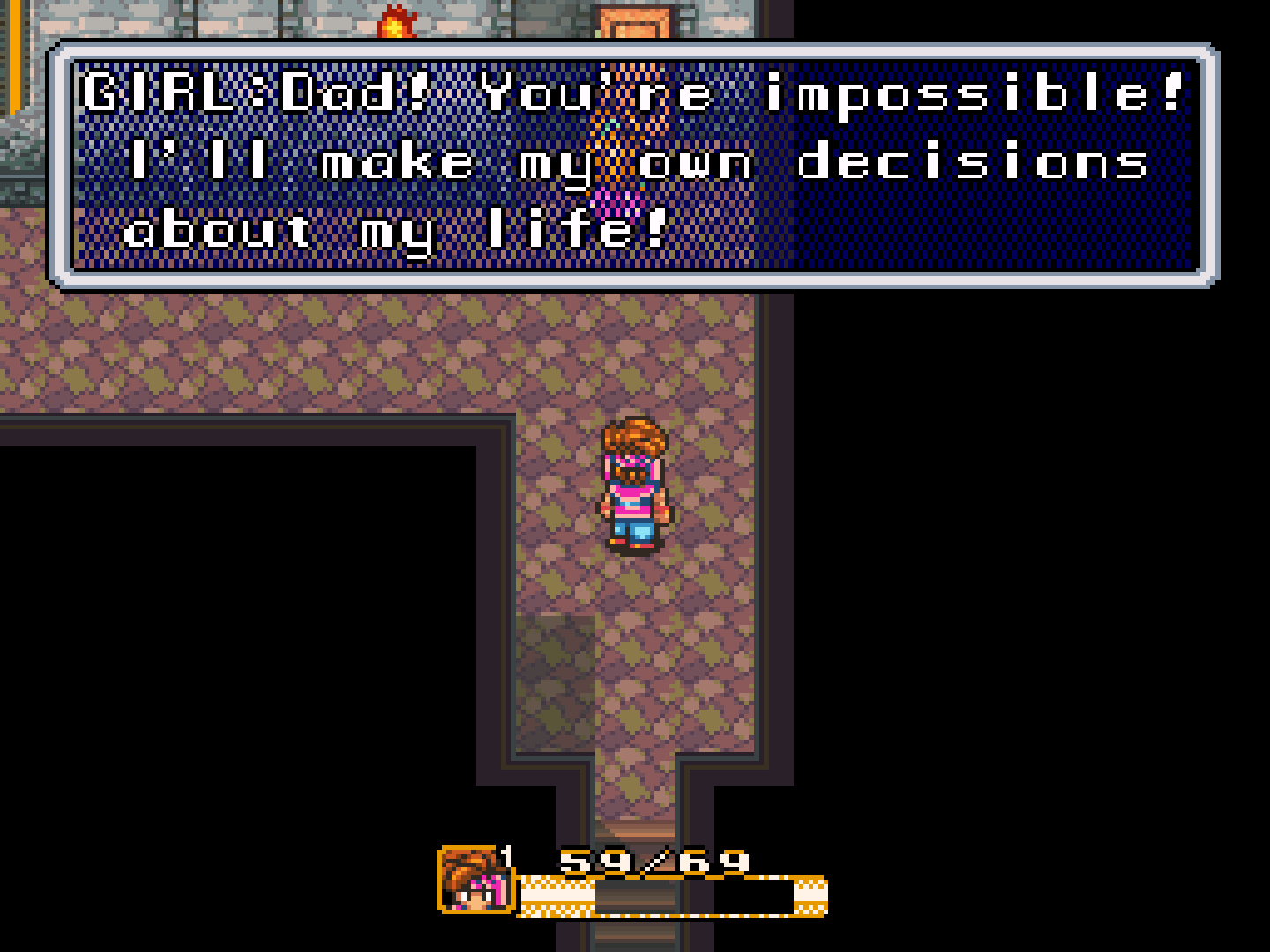 So she's the daughter who's about to get married against her will...

She notices Hero's sword, and asks if he's a swordsman.

She asks him for a favor to pay back her rescuing him. 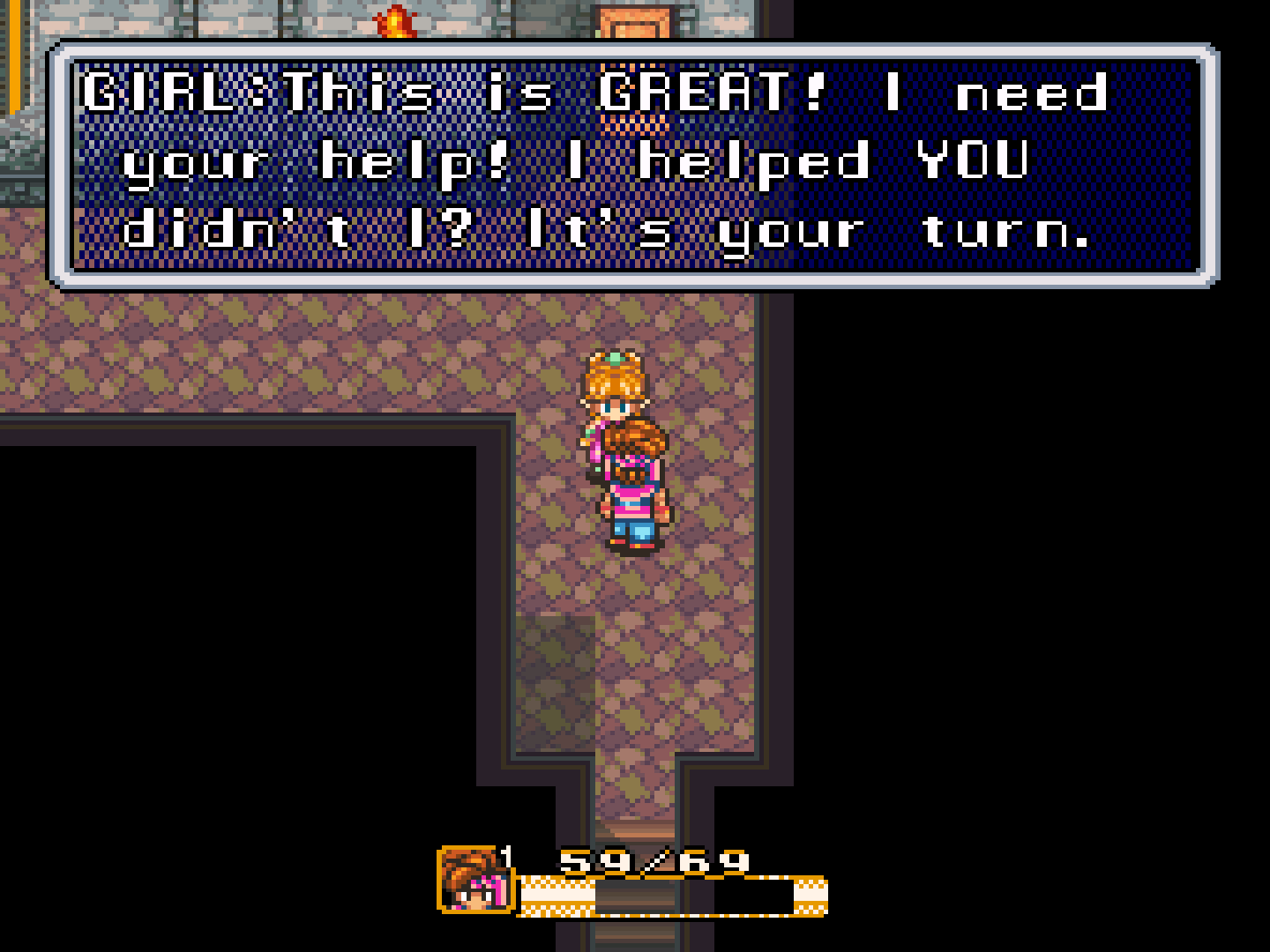 We're going to save Major Dyluck and his soldiers from the witch! 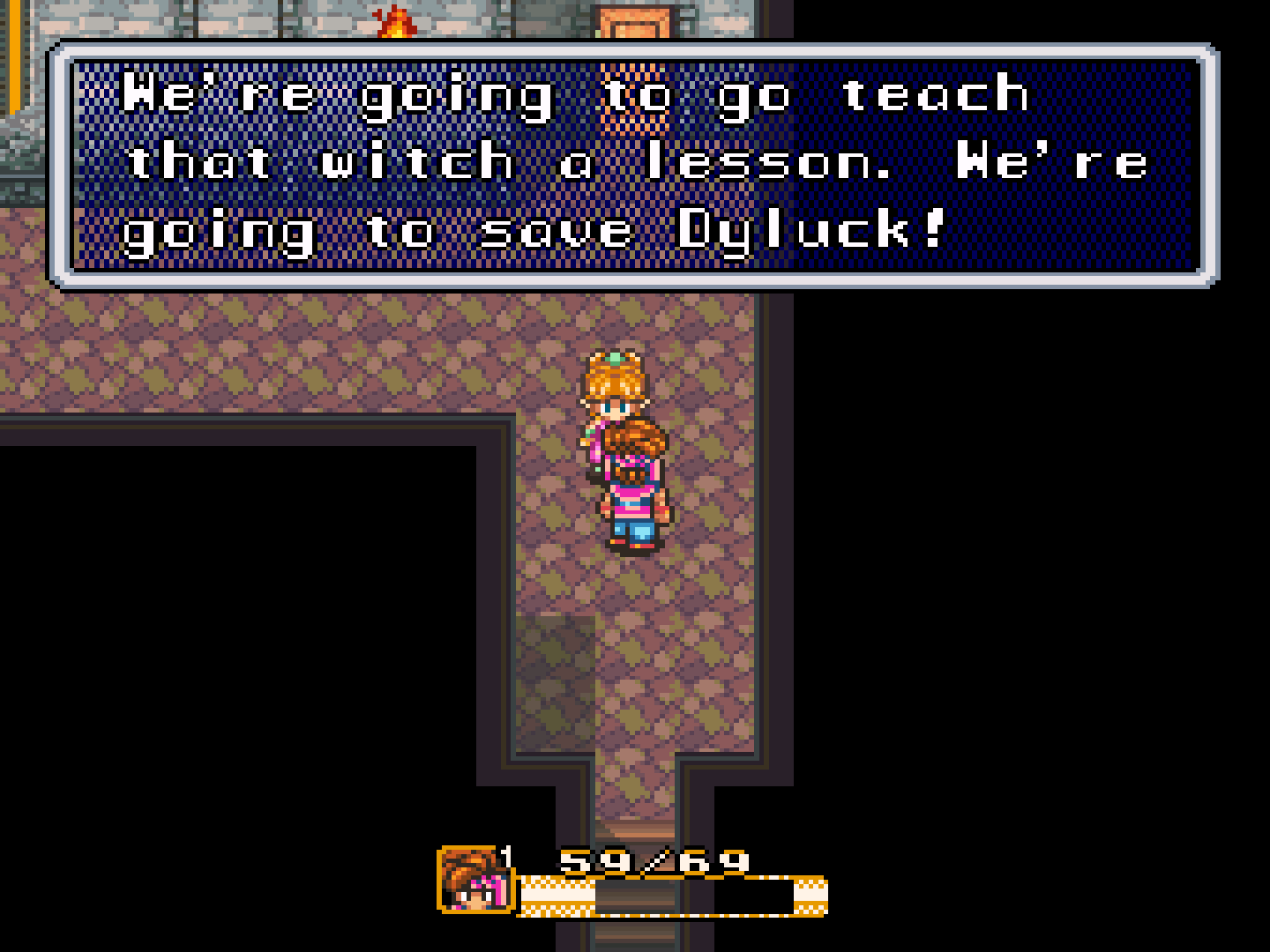 Whoa, that was a sudden turn of events!

Hero and the girl introduce themselves.

And now I'm asked to "please name this young lady."

Hmmm...she almost reminds me of Marle from Chrono Trigger...

What name shall I give her? Maybe something simple, hmmm...

I call her Red. Or maybe, Pidge.

And Pidge joins the party!

I check her stats. 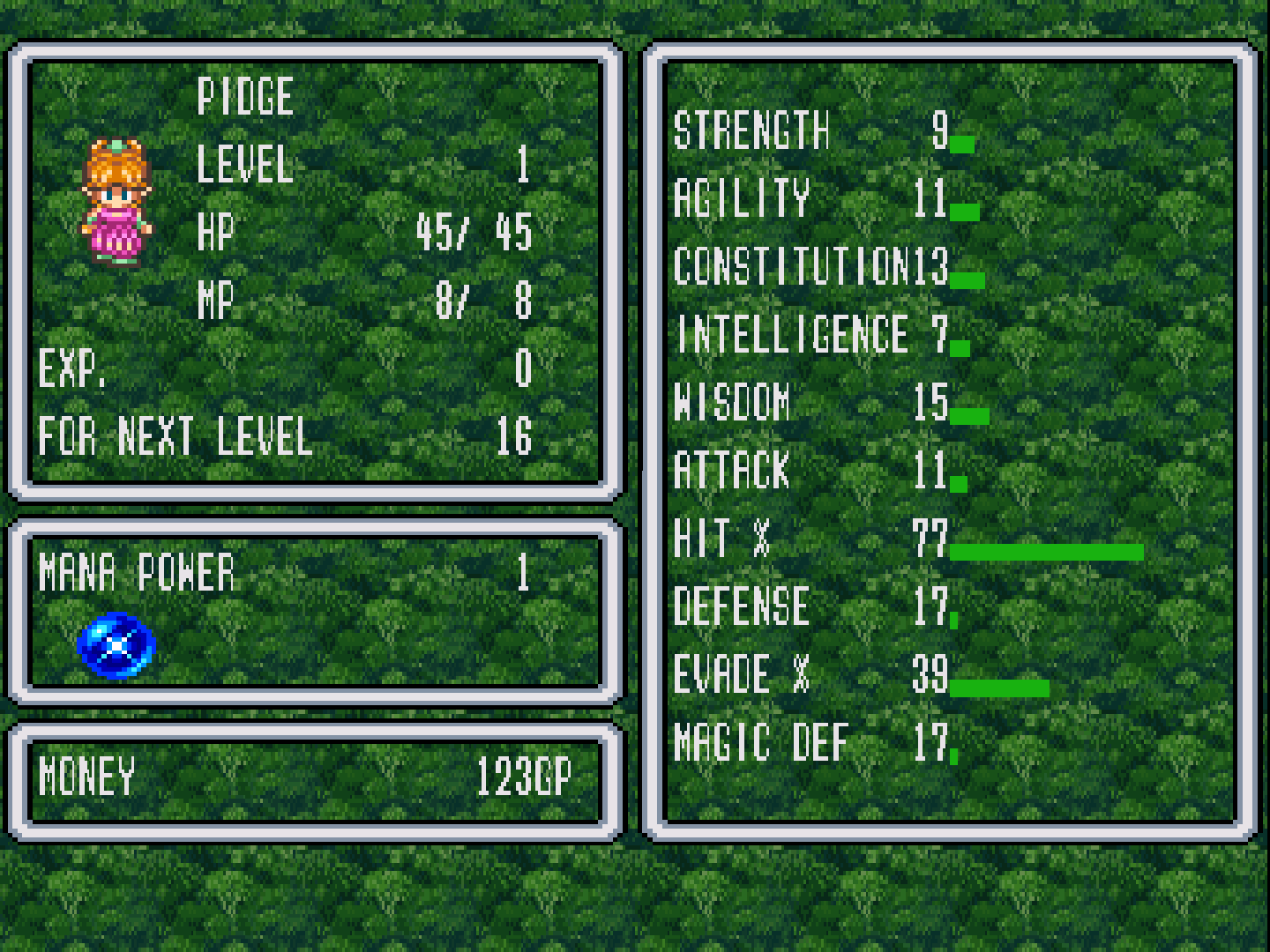 Turns out Pidge is wearing a Kung Fu Suit as her main equipment, and has Spike Knuckles as her weapon.

I explore more of the castle before heading through the double doors, where the King of Pandora and Sir Jema are. 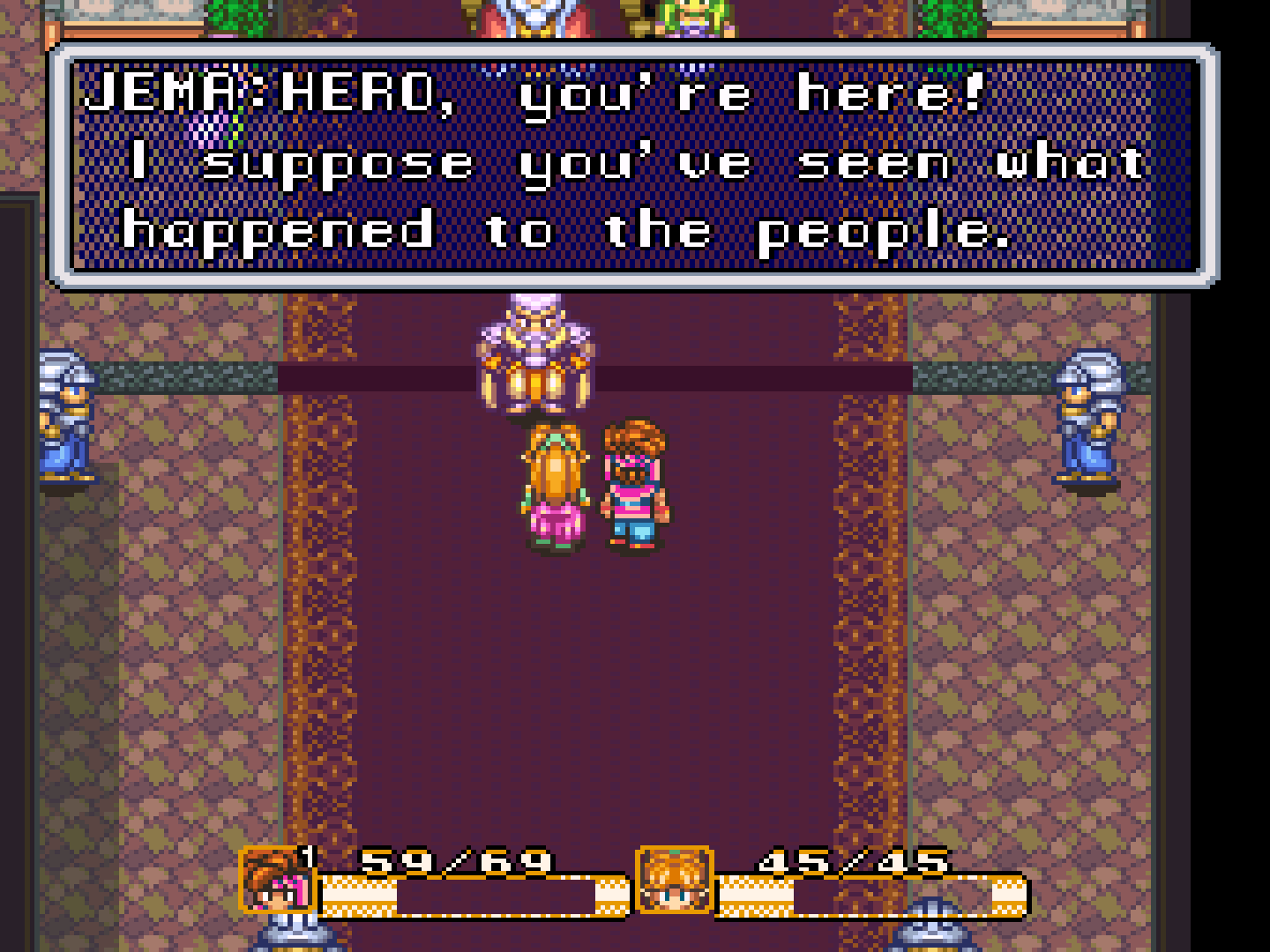 Most of the townspeople have gone quiet. But why?

He mentions that the witch Elinee north of Pandora is sapping people's energy away, and they're heading to the ruins in the south for some reason.

He instructs us to go to Gaia's Navel before making his leave.

The throne guards tell us that we can't enter, (we can't enter where, though?) and that Tasnica is an ally of Pandora.

We speak to the Queen, who advises Hero to leave the country after she notes that he was banished from his village.

The Chancellor isn't too happy about the state of affairs in the country.

The King's in distress, he points out all of the problems in Pandora, where he points out that Elinee has turned everyone in his kingdom "into zombies," with his best major captured.

Pidge calls out the King in spectacular fashion. 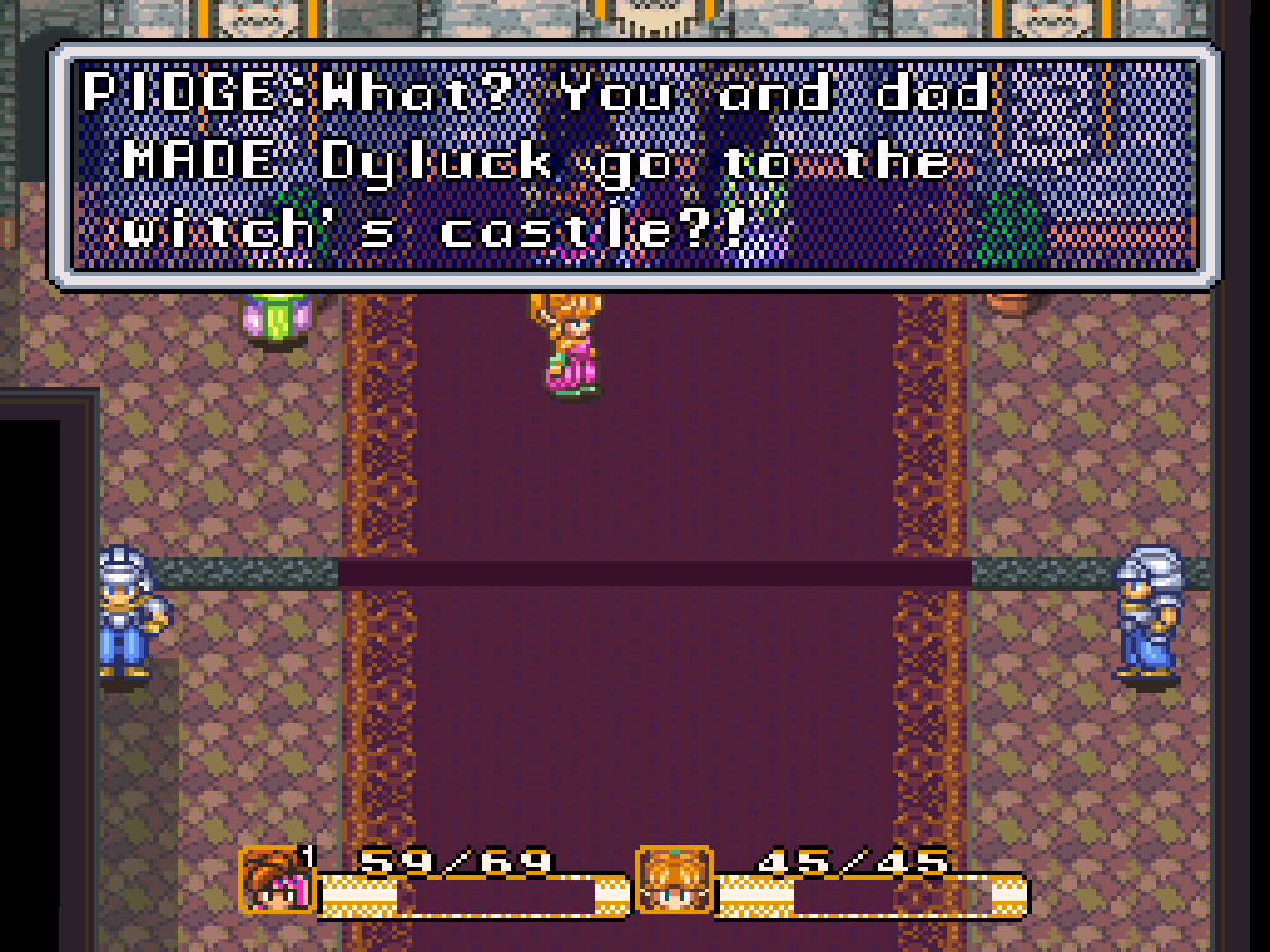 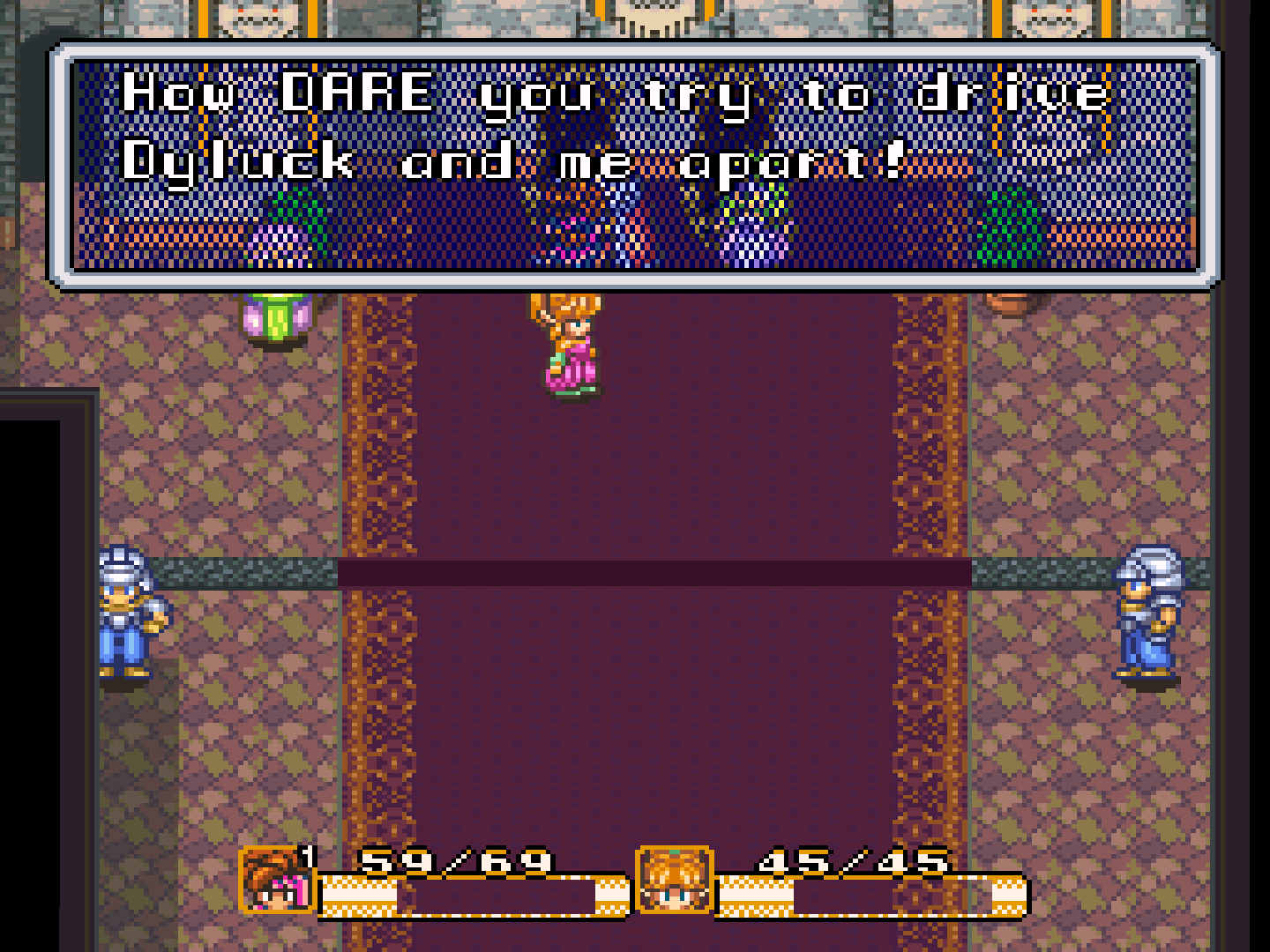 So is this line implying she has some sort of relationship with Major Dyluck?

The soldiers call her out on her rudeness. We leave.

We explore the king's room, where there's a stairway leading to a treasure house meant for supplying the "knight in the legend."

So I use the X and Y buttons, or triangle and square, to switch between Hero and Pidge...

I go into the room where Pidge's father, Sir Elman, is supposed to be. No one's there. He must have left...

At the item shop now, selling the extra Kung Fu Suit and buying more Candy, but I'm not able to since I can only carry up to 4 pieces at a time!

I have the party rest up... 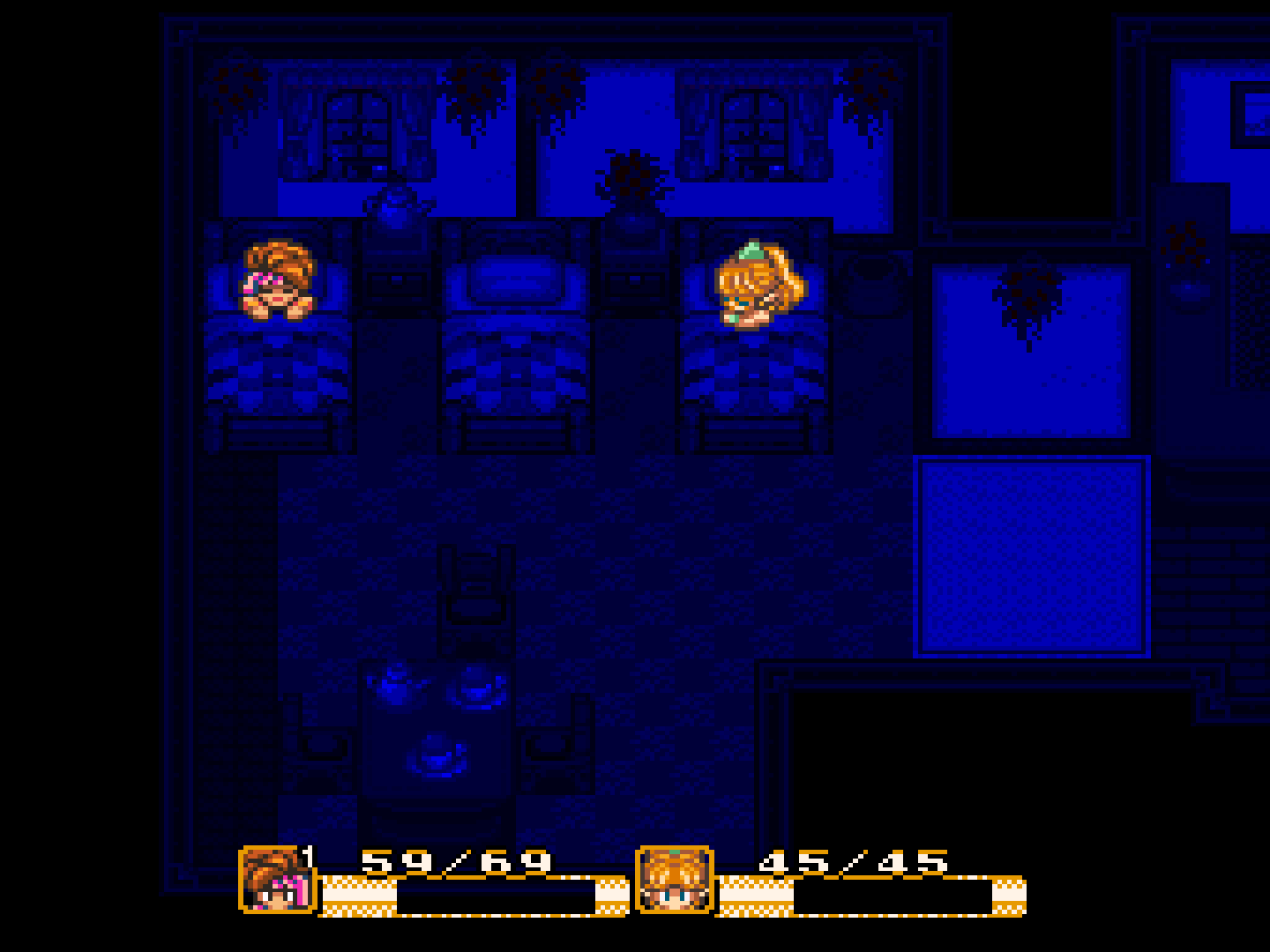 ...and save, stopping my session here for tonight!