One reason why I've been holding off on getting to the end here is because I have so much to write about, regarding everything that's coming in this scene, and after. Another is the obvious: I really don't want to finish this game, because I'm going to miss it so much. 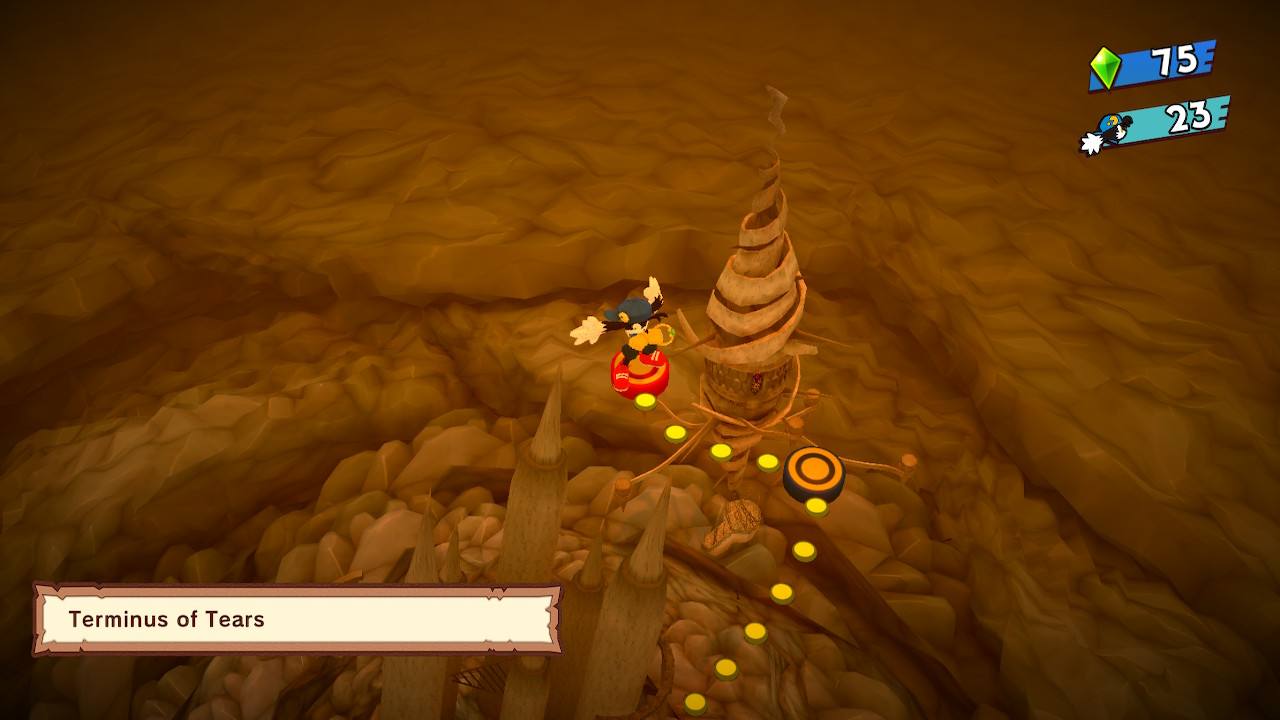 First time I started this level I skipped the whole beginning. I was quite terrified of the King of Sorrow, and I did not get over it quickly. I even remember, in one earlier playthrough, having to cover my TV (not a flat-screen TV, mind) with a towel to hide the King's face and to listen to the entire scene that's about to play out now. 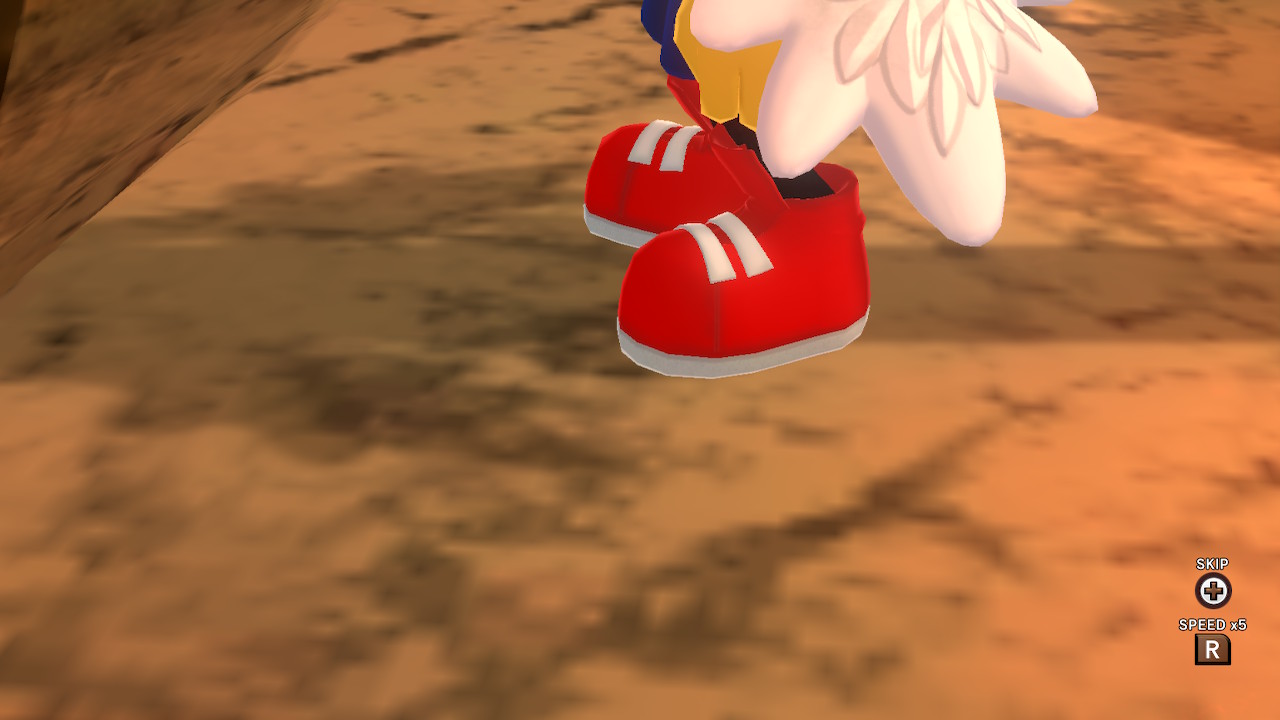 The music starts off like it's going to crescendo into something grandiose. Then the transition happens... 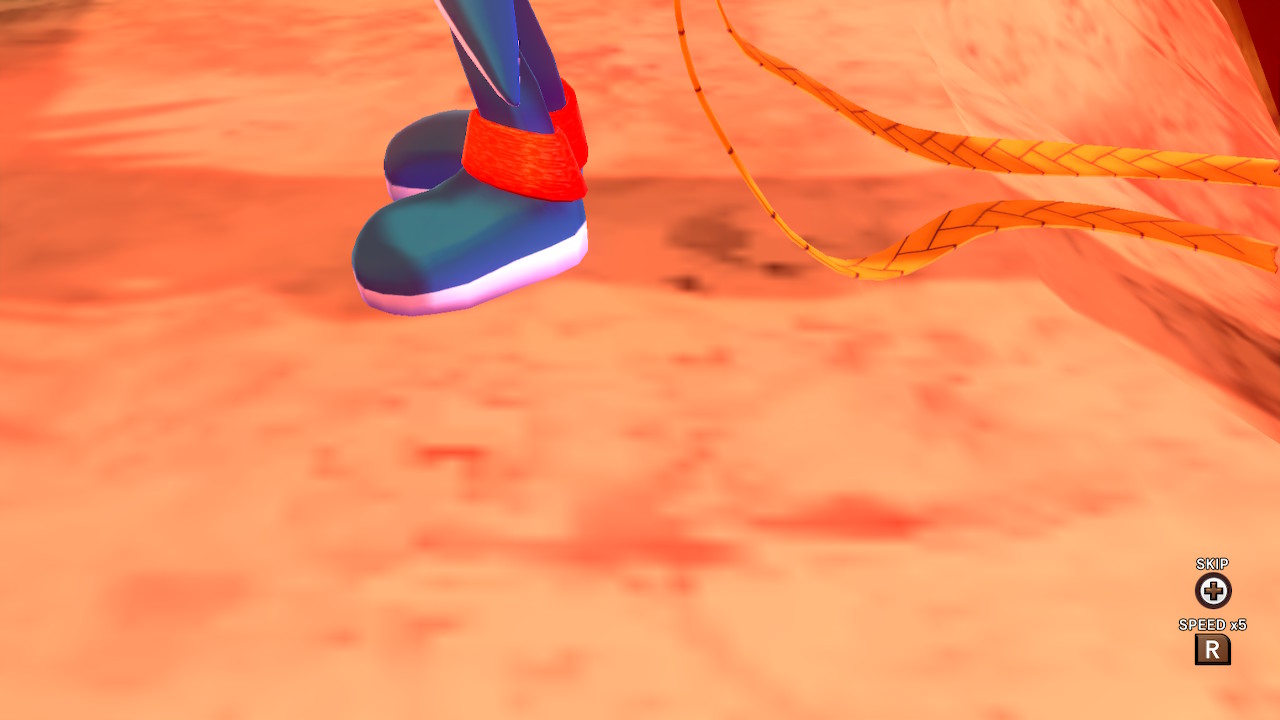 This establishing pan shot I like. It anticipates who the King, the source of all the "evil" in Lunatea, really is. Plus, it highlights the similarities between him and Klonoa. And watching this scene carefully again (and reading other analyses of this game beforehand), maybe Huepow? 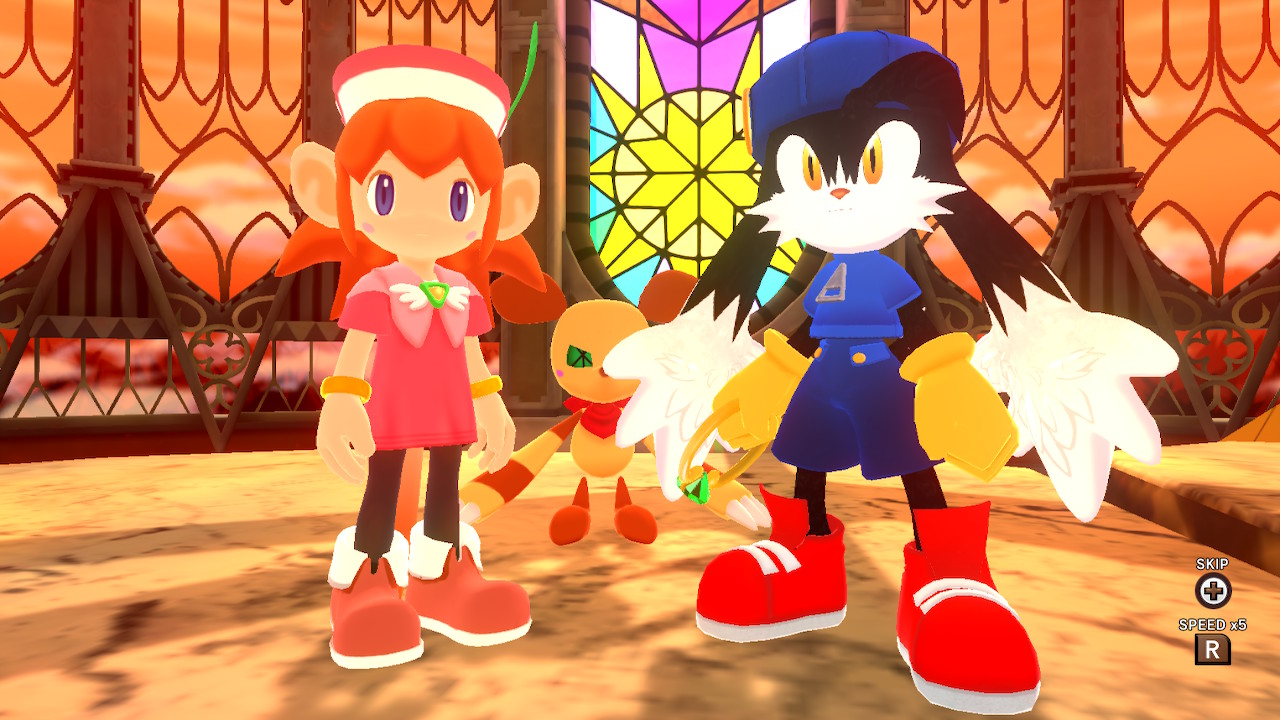 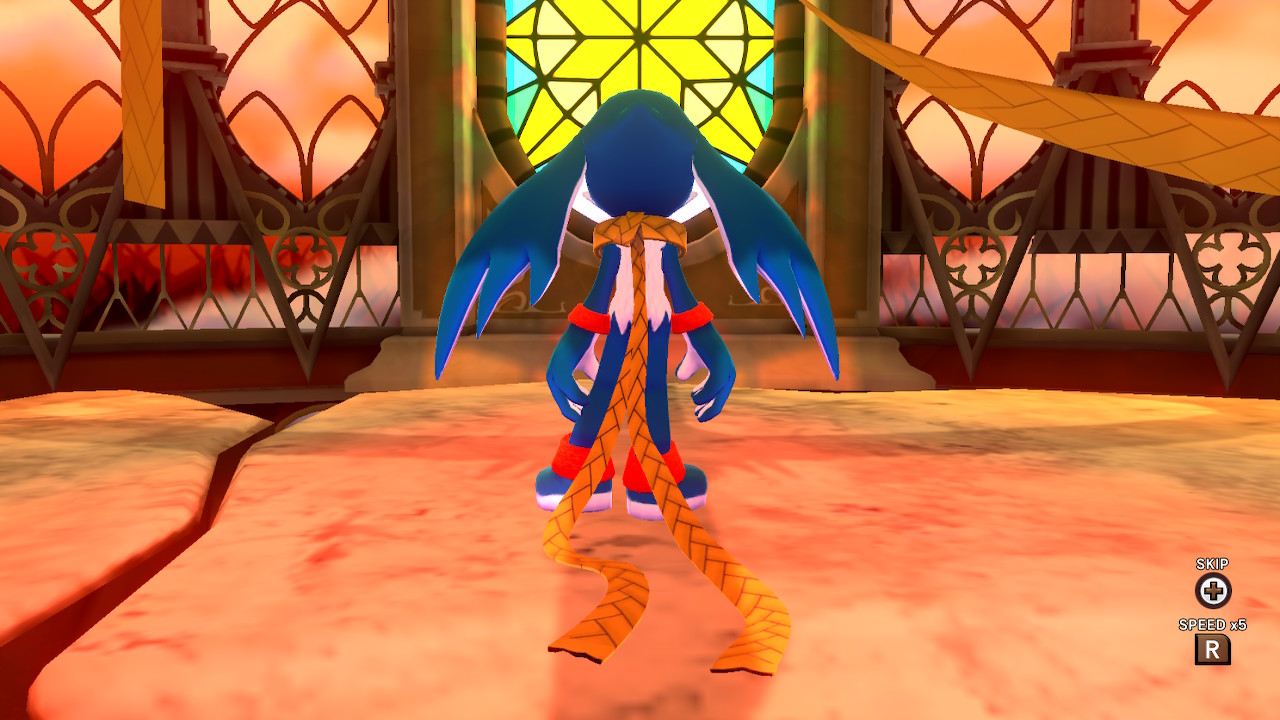 Klonoa: "Are you... the King of Sorrow?"
King: "You're here... to stop me? You've come here... to banish sorrow. Right, Klonoa?"
Lolo: "Explain yourself! What were you planning to do by making the Fifth Bell appear in our world?"
King: "Making it appear? No. The Fifth Bell was always a part of your world. It was always there. But you pulled the veil over your eyes, and refused to see it."
Lolo: "We refused... to see it?"

The overhead spinning shot here is really telling. By emphasizing the crater in the middle, it represents the chasm between the emotion of sadness, and the Lunateans are from it themselves. 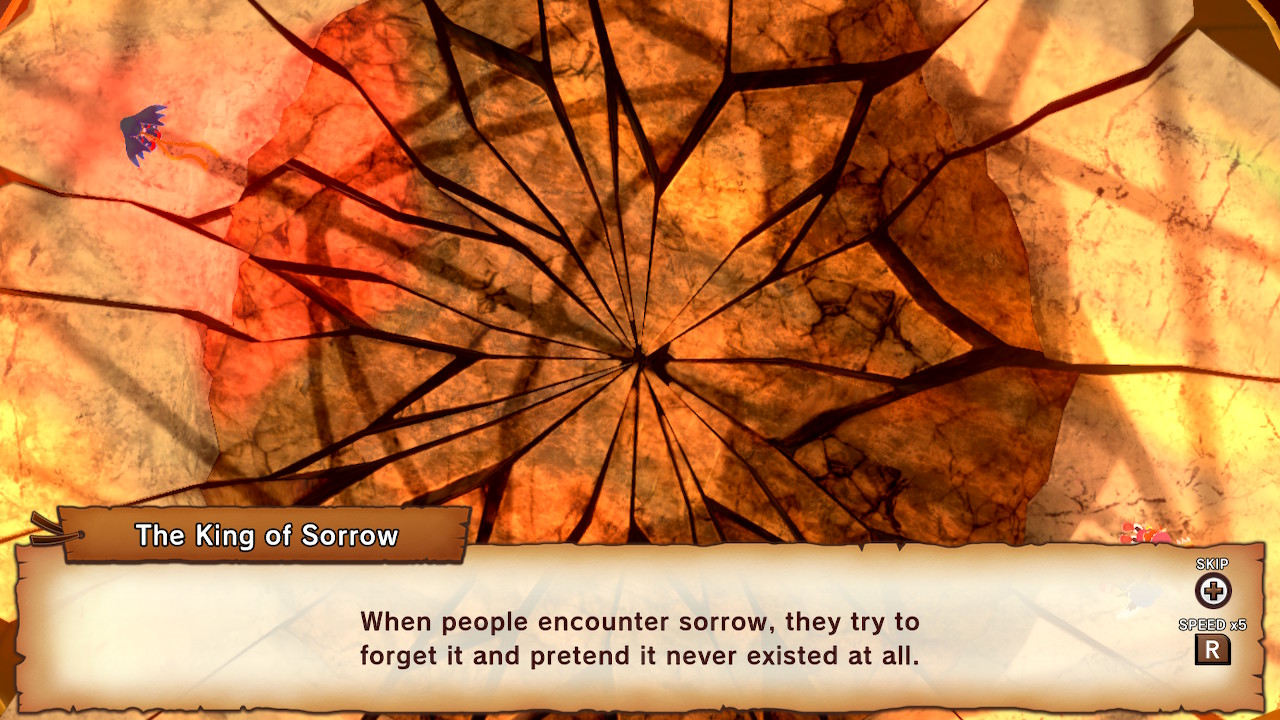 King: "When people encounter sorrow, they try to forget it, and pretend it never existed at all."

King: "So I used the ark to lift Lunatea's Veil. All so that you could save the Kingdom of Sorrow. So that Lunatea can once again remember..."
Lolo: "So that we... would save...?"

Aside: Lunatea's Veil, as I knew for a long time, was not literal, but metaphorical. The "veil" was used to cover up, or hide away, sadness, even going so far as to call it "evil". Funny enough, "evil" and "veil" are just anagrams of each other. This also reminds me: this article delves into how deep this game is, mentioning how it doesn't treat the subject of sorrow lightly.

Now the King brings out his final surprise. 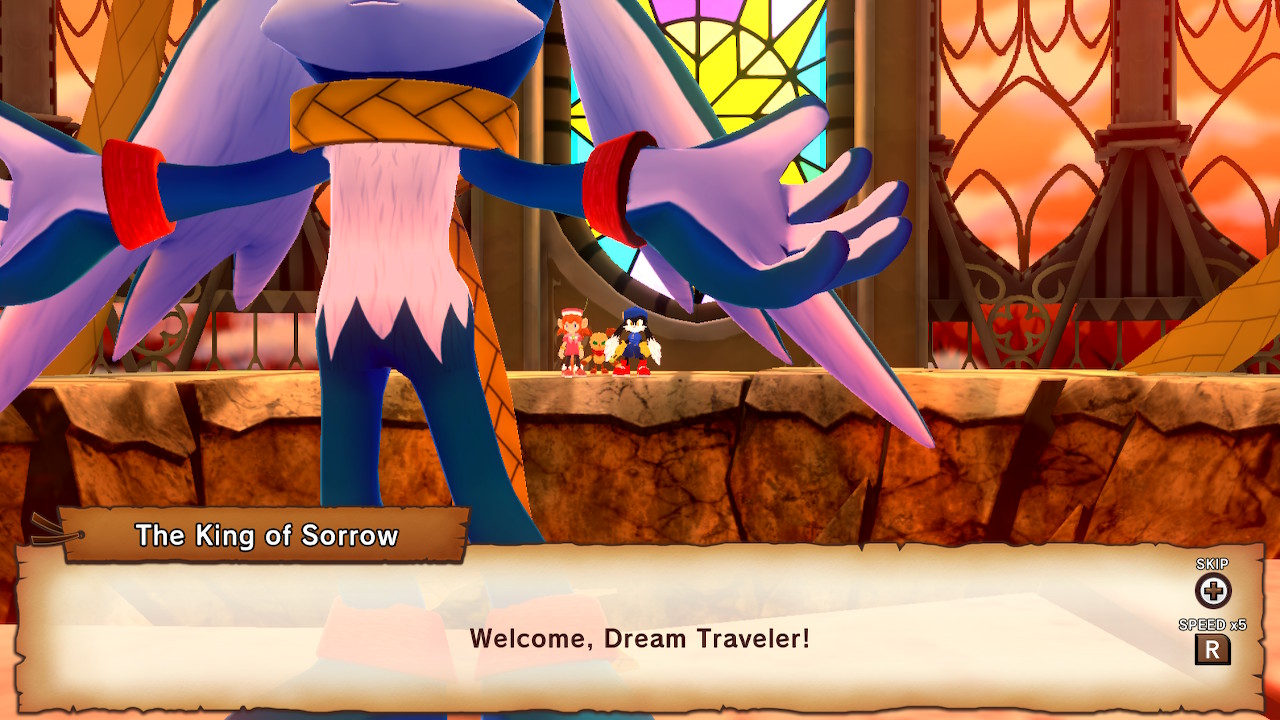 King/???: "You were led on with false prophecies...you false saviors of a foolish world."

The gang turns around. 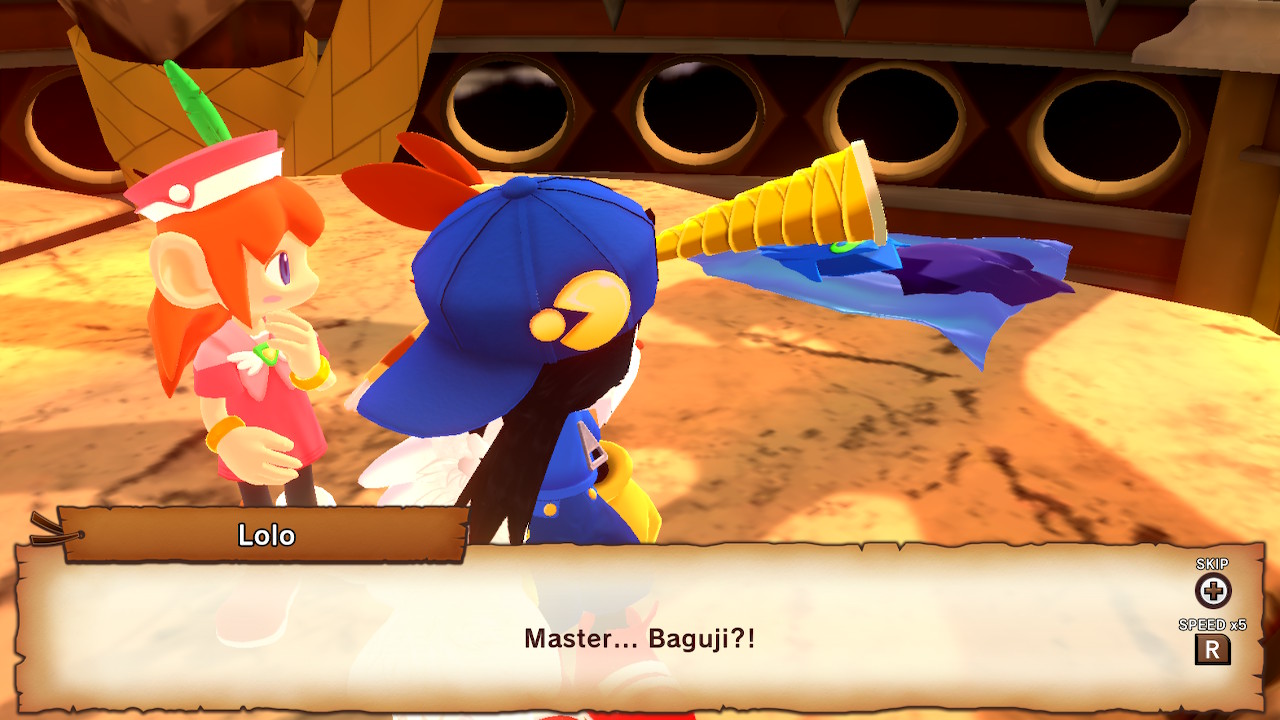 Yup. Baguji is, or is working for, the King of Sorrow himself.

That brings up something: Is the King of Sorrow, through Baguji, labeling the Fifth Bell "evil" to the gang as a way of putting himself down?

The King has finally lost all hope, feeling "tossed aside" by the world. Like Ghadius for Phantomile, he now wants to end Lunatea.

King: "If sorrow is so unwelcome here...Who cares if this world is destroyed...Let the world be consumed by sorrow. It was I who brought you, the Dream Traveler, this far..."

The cuts as the camera gets closer to showing the King's eyes...it gives me a bit of a chill seeing them...I can see why I had the foresight to skip this part in previous playthroughs.

The gang prepare themselves. 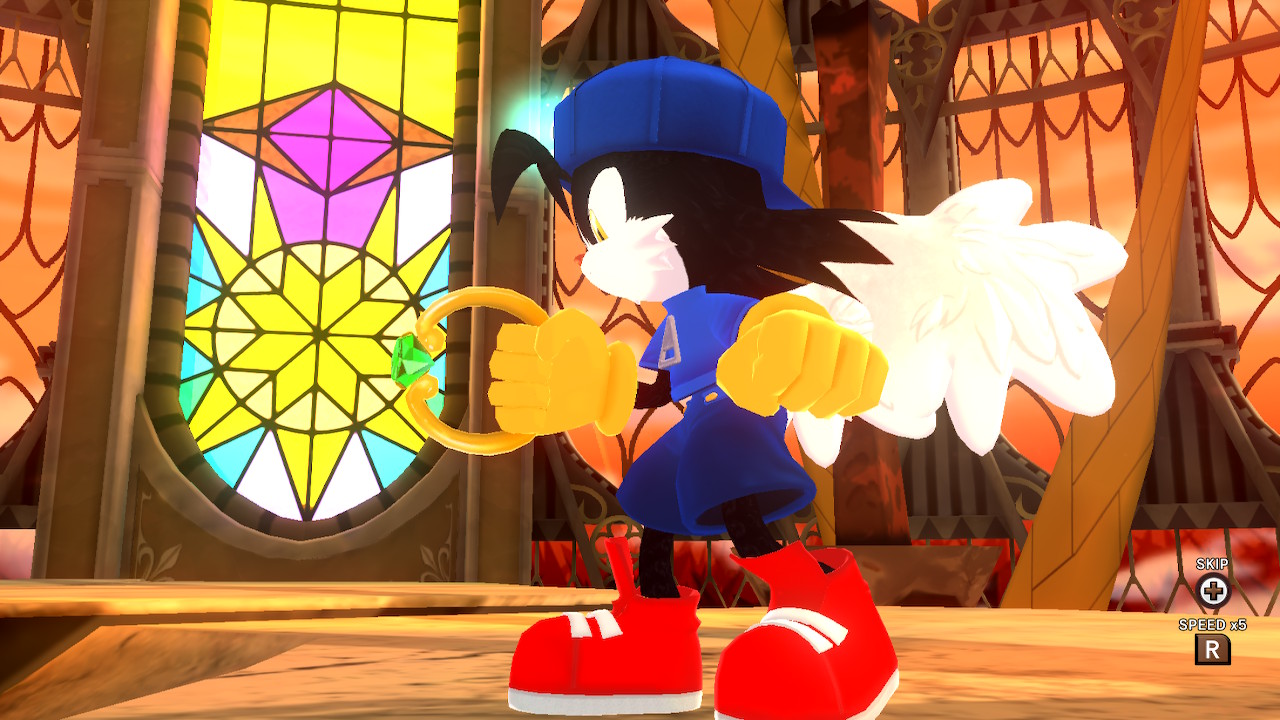 The King raises his arms, preparing his first salvo... 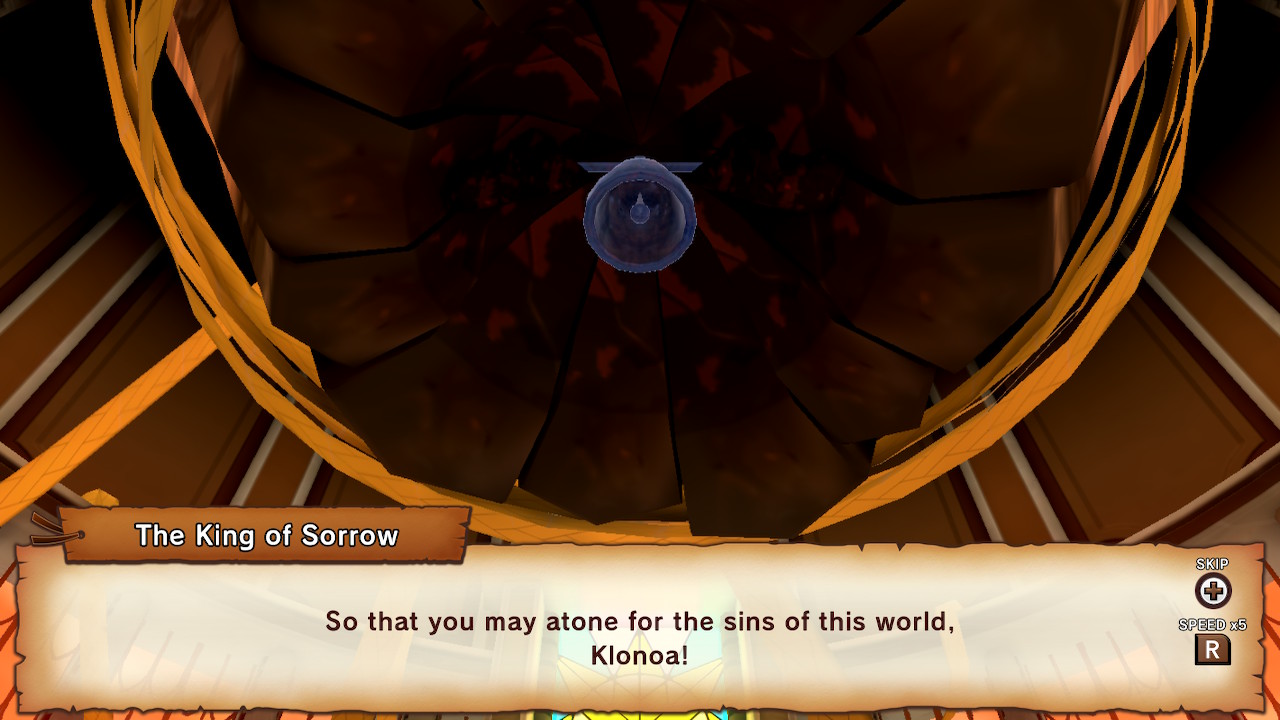 King: "So that you may atone for the sins of this world, Klonoa!"

A Fifth Bell's above the terminus!

A flash of light! 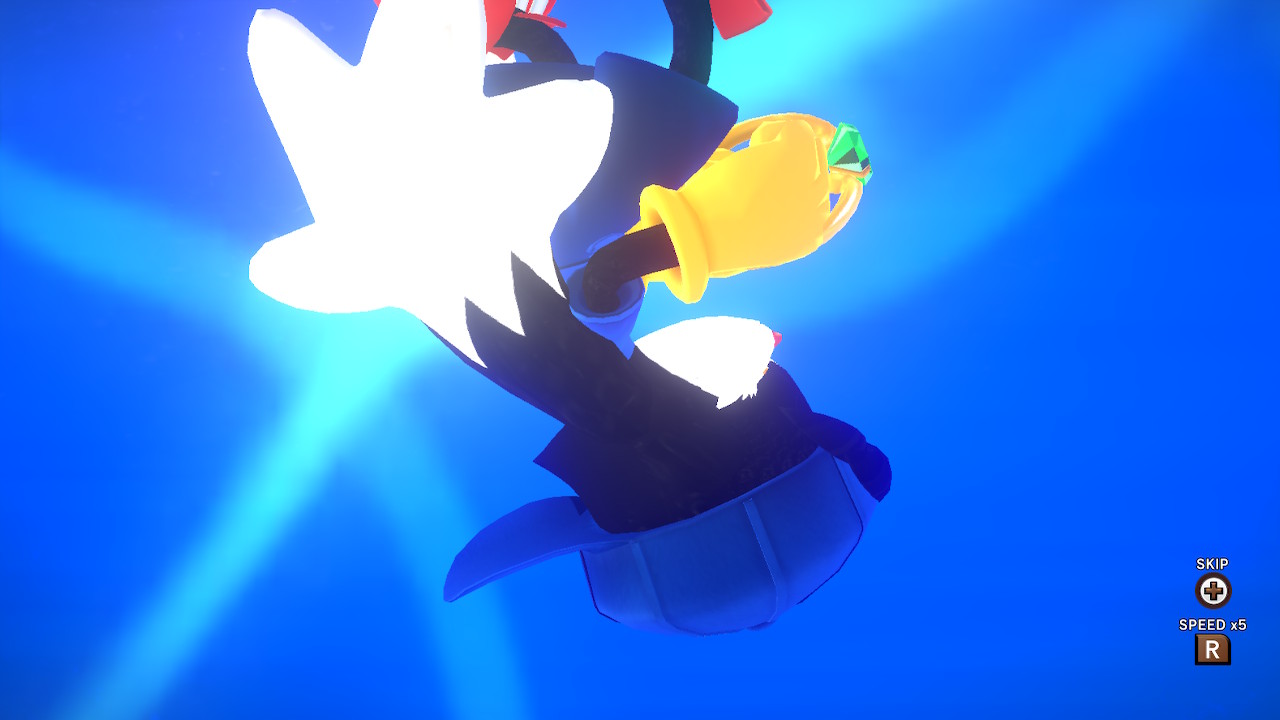 Klonoa wakes up, now in another dimension...hoverboard on feet. 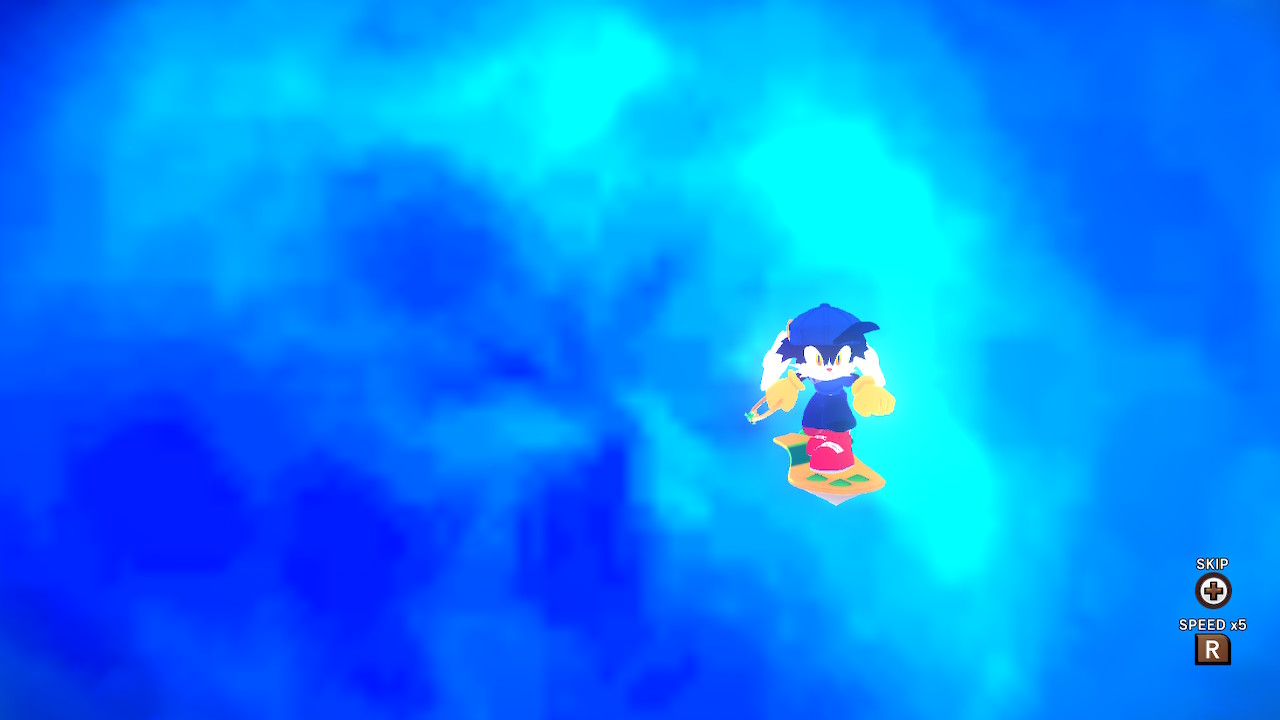 The final boss fight is here! 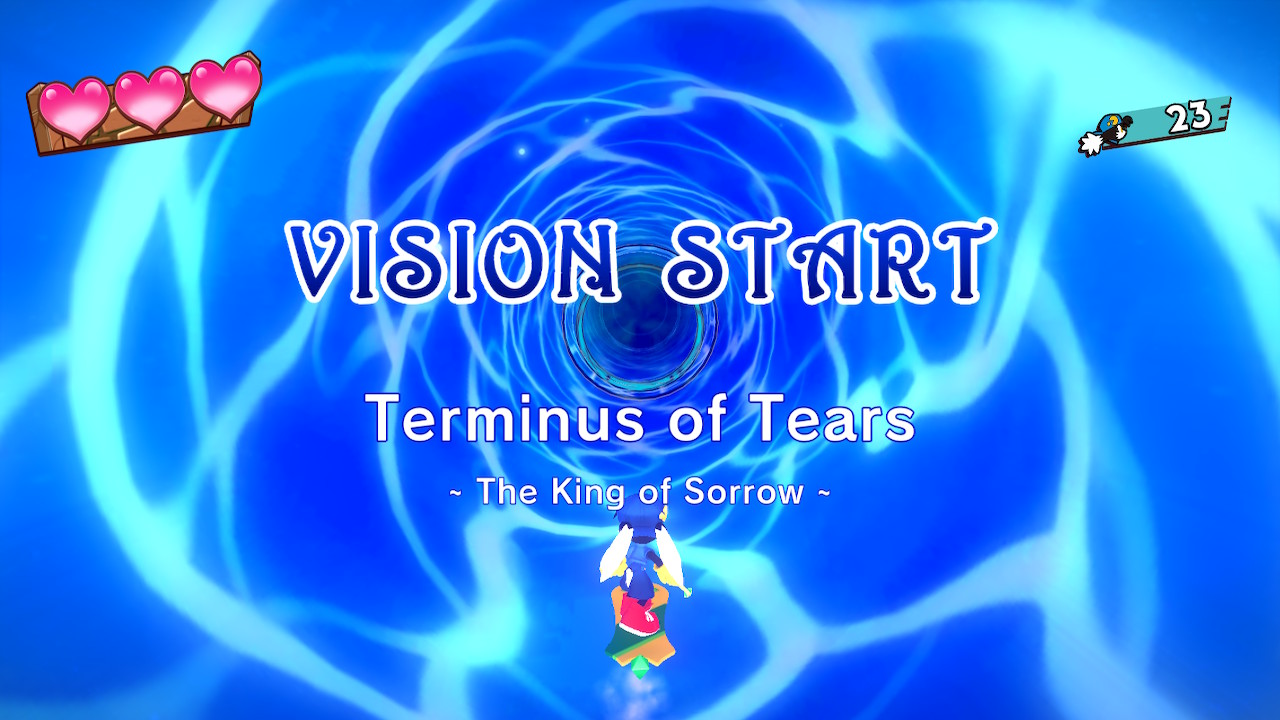 There's the first form of the King of Sorrow! 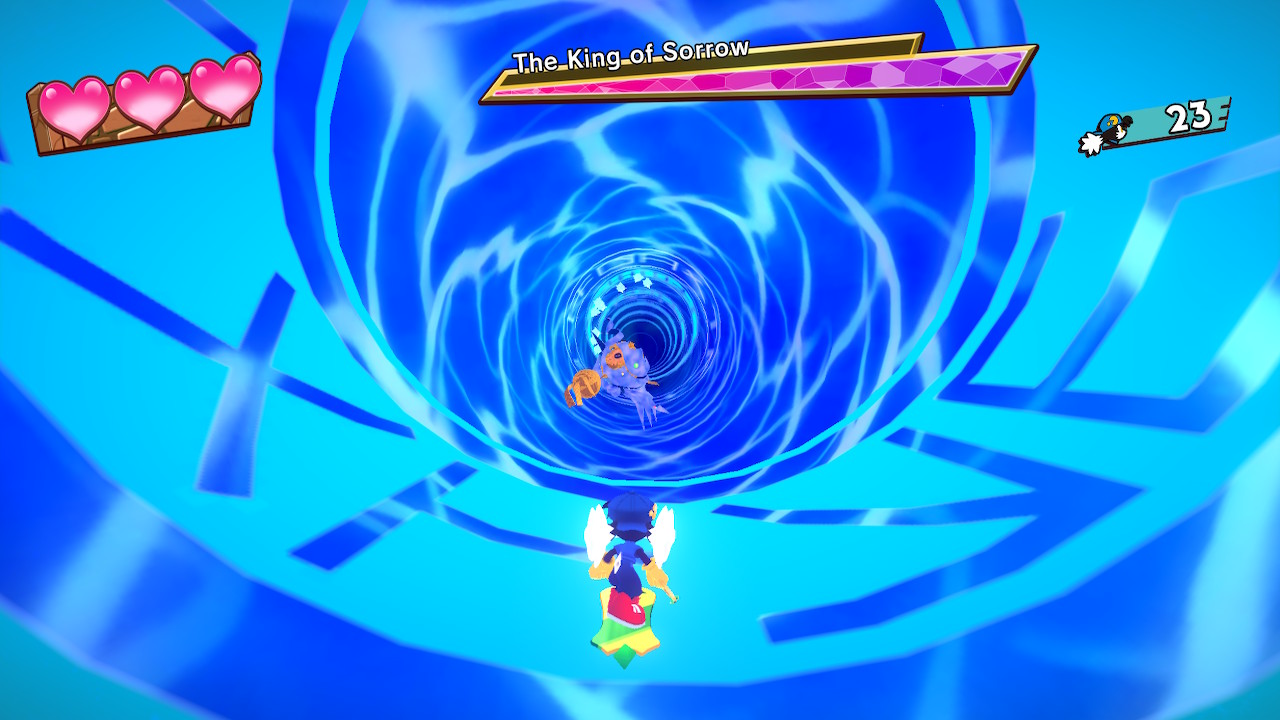 I have to hit him with nearby Nemo Moos, and avoid the stars in the spiral... 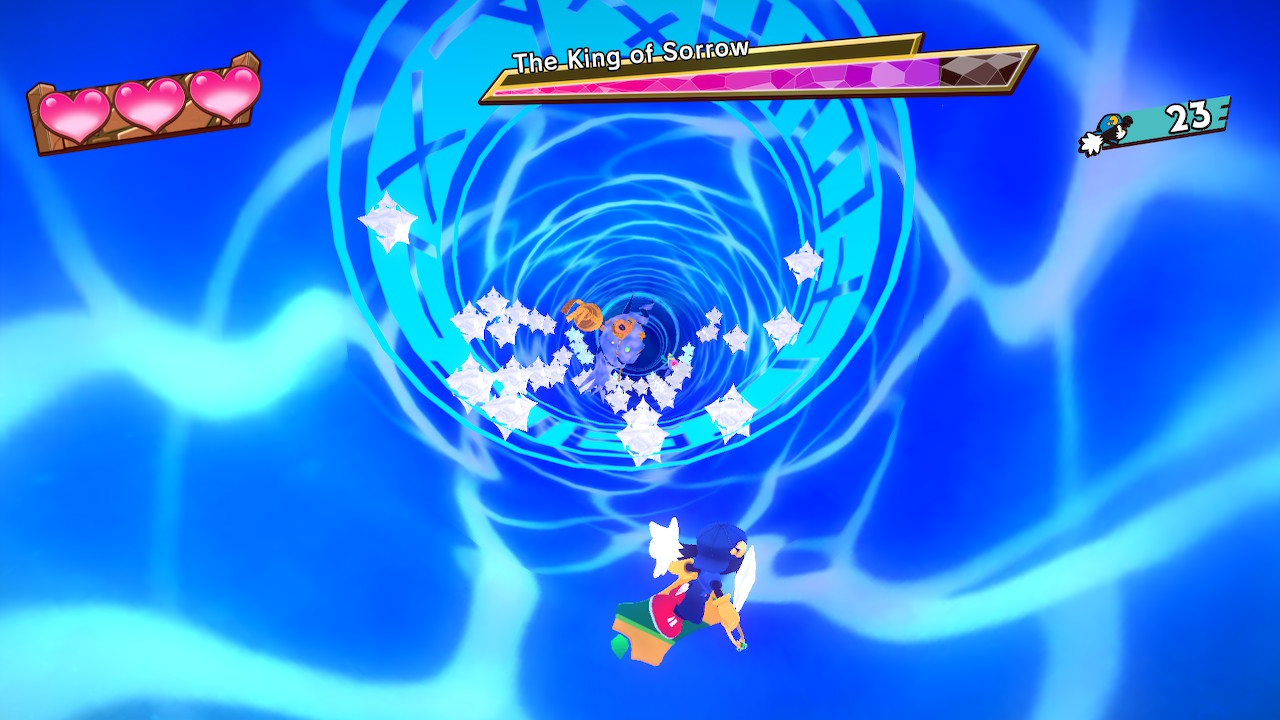 Looks like my skills are sort of showing their decay...

The more we hit the shell, the more blue he loses... 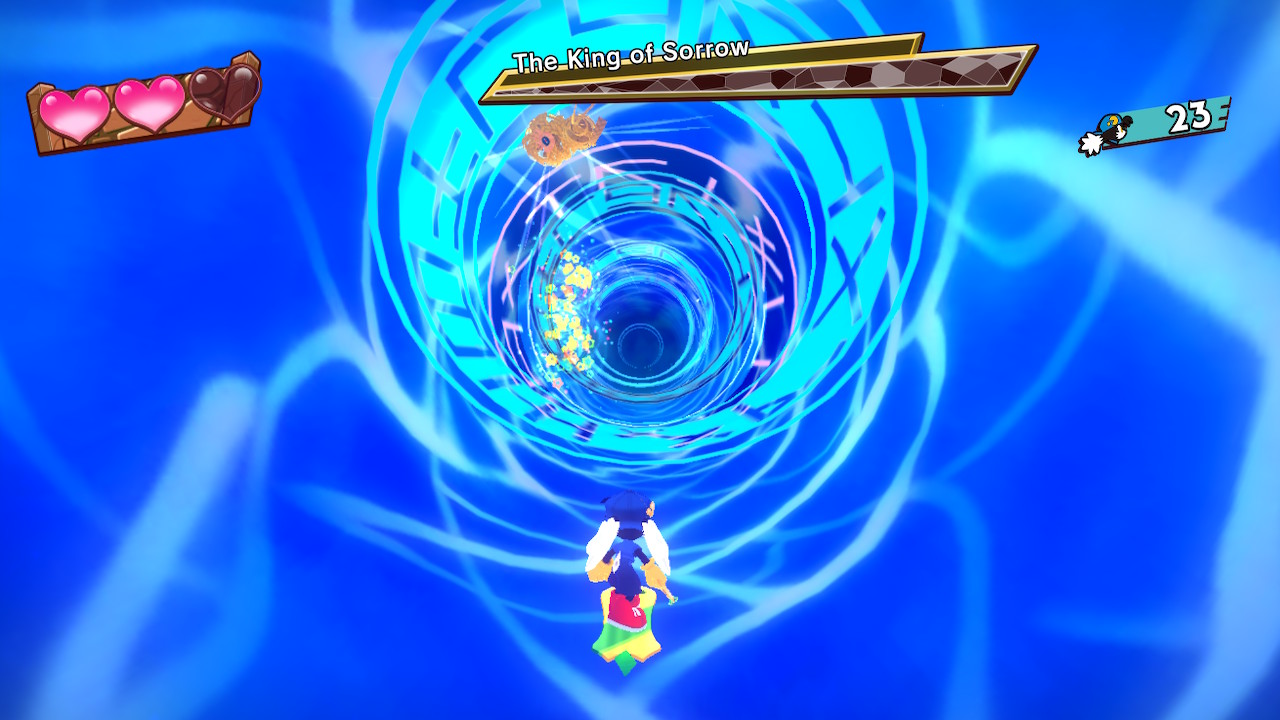 After five hits, down the shell goes!