Aside: One thing I noticed last session, is whenever I save, depending on the location, the insignia of the kingdom we're currently in shows up as a watermark behind the location name.

In this case, since we're at Volk, the Volkan emblem is what's shown.

Now we have two new places to enter: Volk City or the Underground. 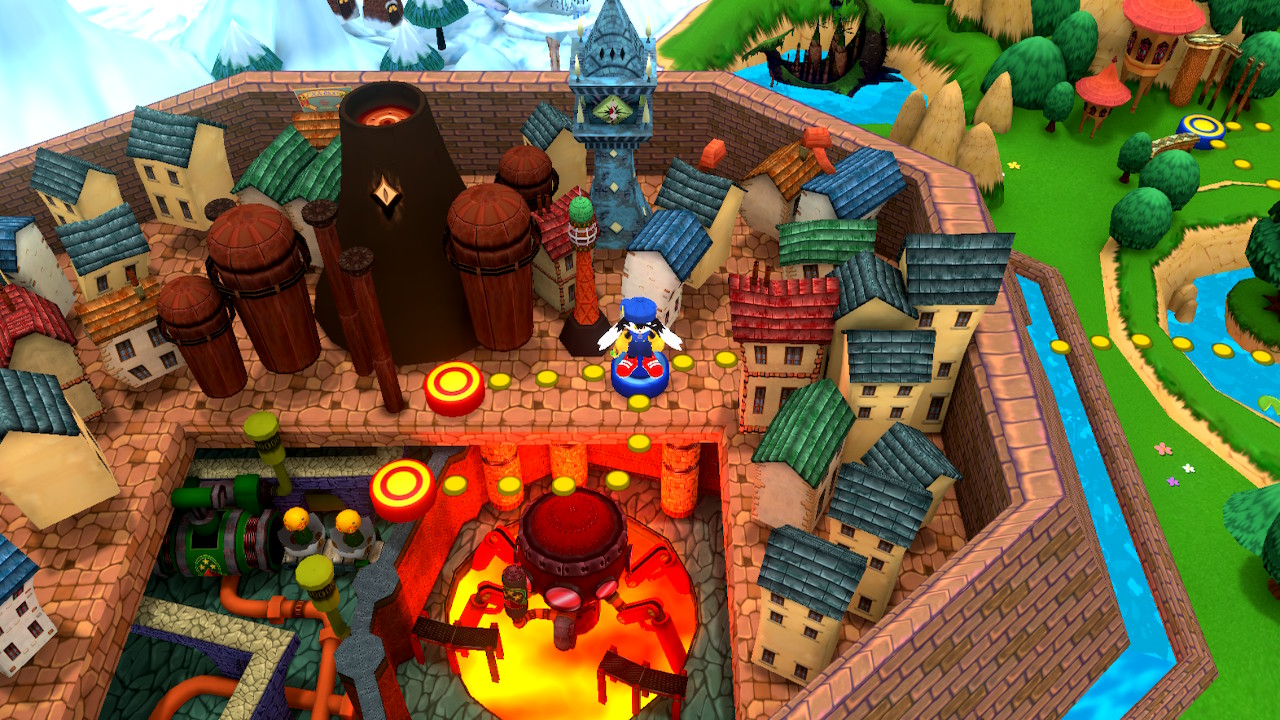 Unlike my previous playthroughs, I go aboveground first. 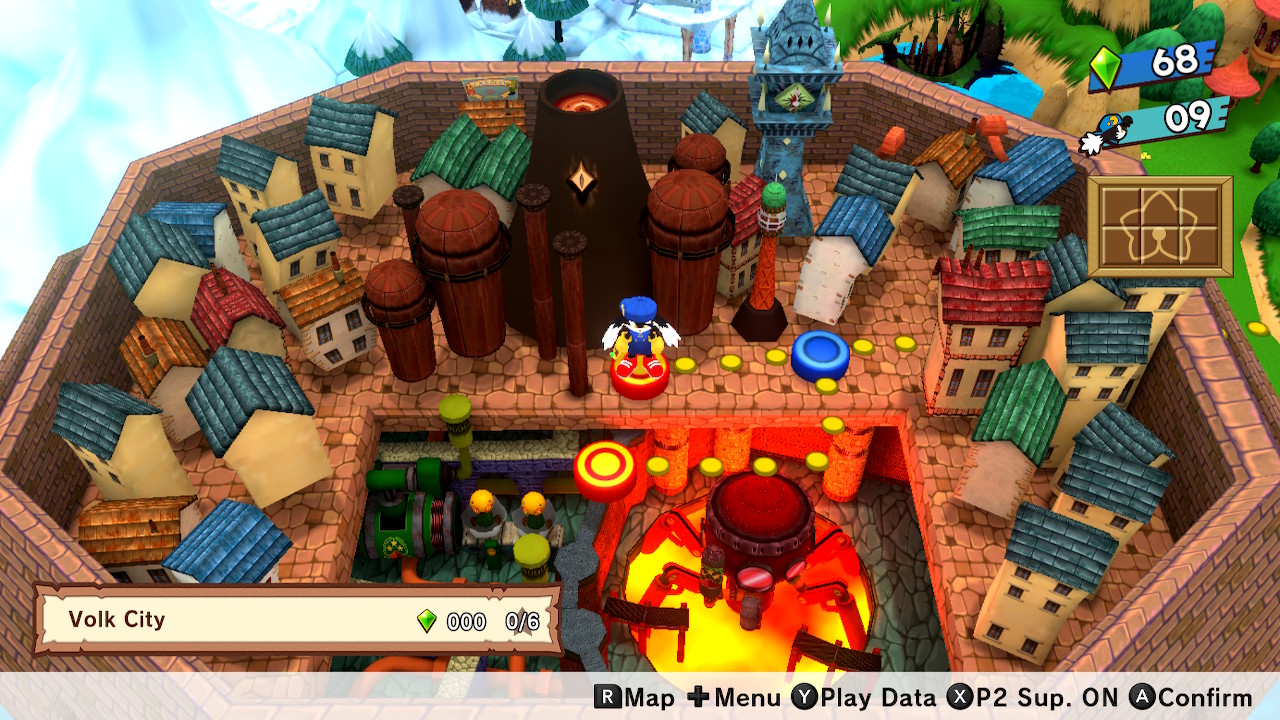 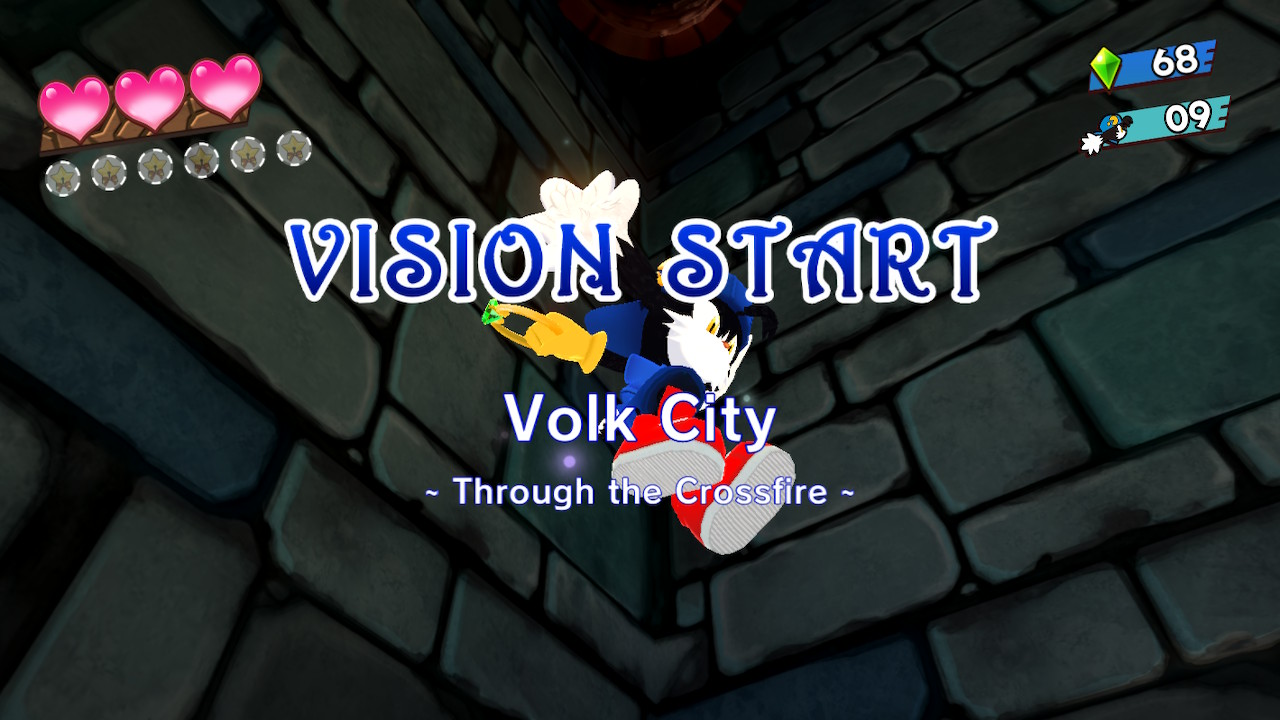 And with that dynamic entrance, we're in the sewers of Volk.

And we meet up with an old foe, the spiky crab walkers! 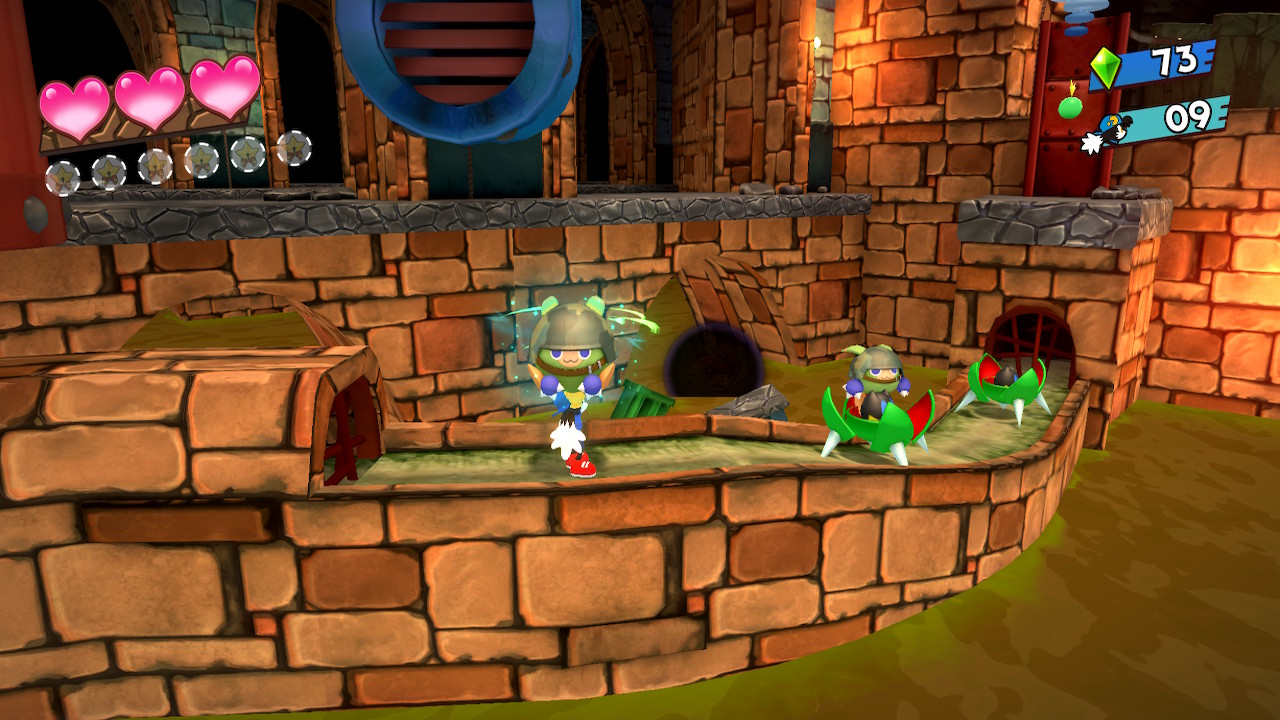 Two Moos spawn on the runoff drain, enough to take care of the spiny crab creatures, and to get us on the ledge.

We slide down a spiral, dream sprite in tow!

I notice armored Moos here too, we're really in the heat of Volk now...

Mid-slide, we pick up our first doll piece!

We come across our first branching path: a cannon west of us, pointing to a beam beyond, or the sewer exit east. It's forked by small trampolines perched above the drink.

Knowing Klonoa's not a swimmer, I check both paths before taking the cannon.

A dream sprite challenge completed, and we make it to the end of the sewers.

A Jetimo's at the end.

Up to the top we go! 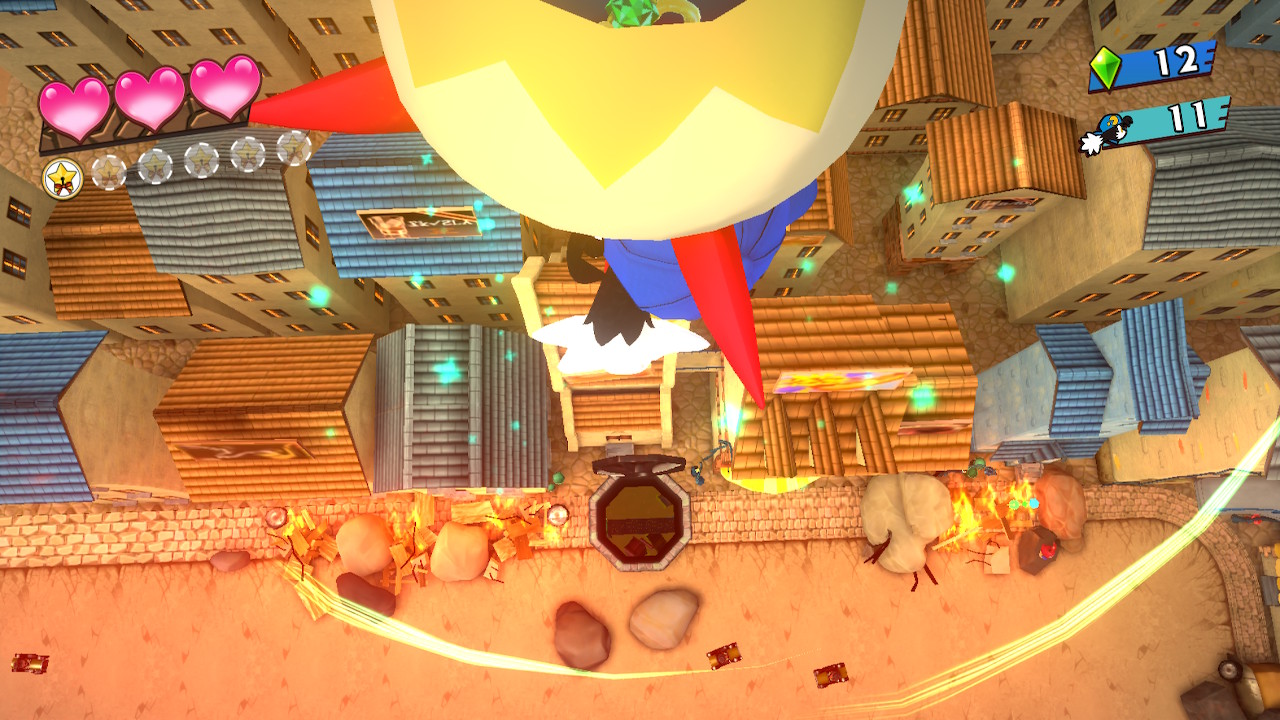 We're now in the city proper.

I notice a Moo sleeping near fiery rubble, and a citizen in the background...

Our next hurdle is a Glibz, with missiles instead of spikes! 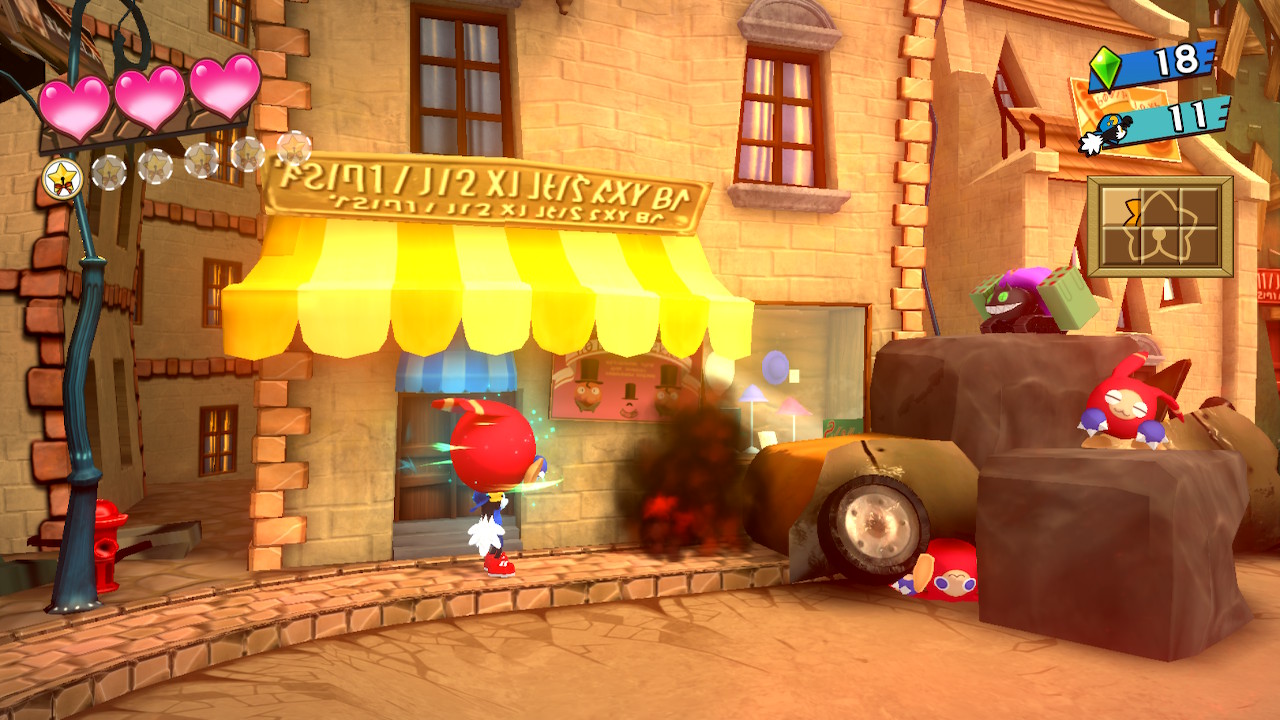 We break the armor of a Moo and throw him at an egg, giving us doll piece number two!

Around a corner, innocent civilians run away from a building! 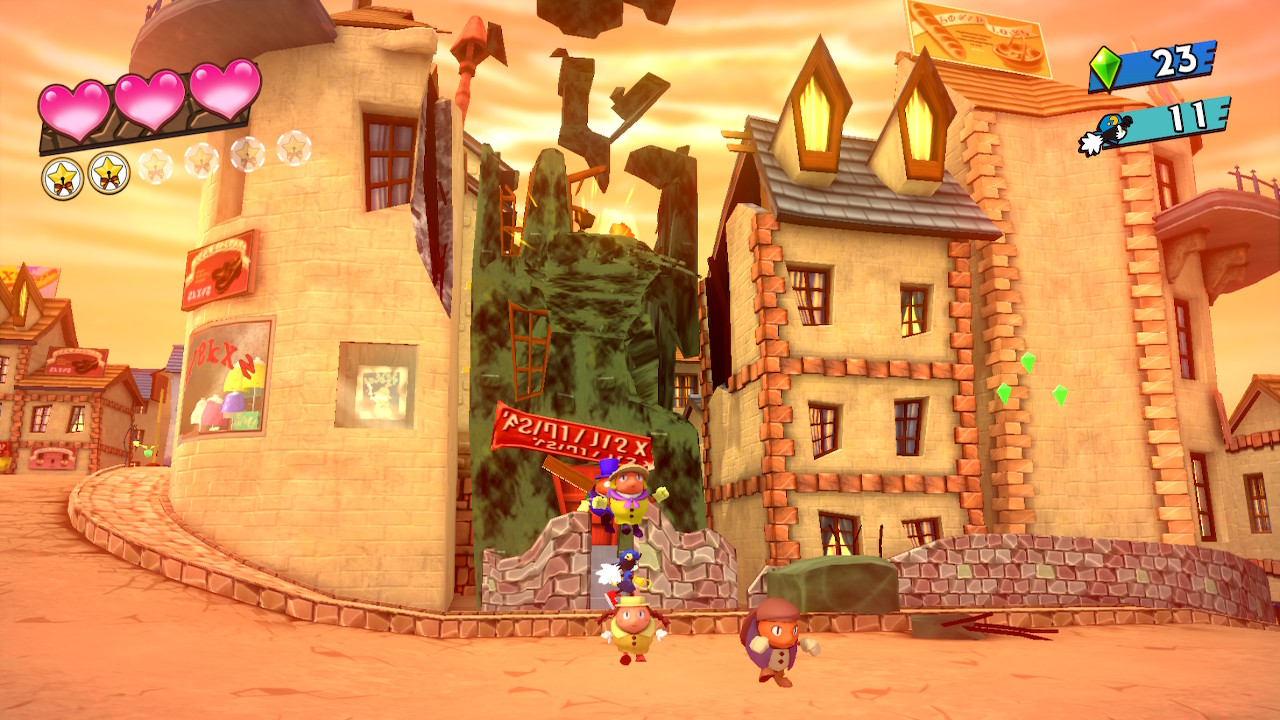 We get a third doll piece midair in between rubble!

Next stop, we see a Big-o-line (a big trampoline)! 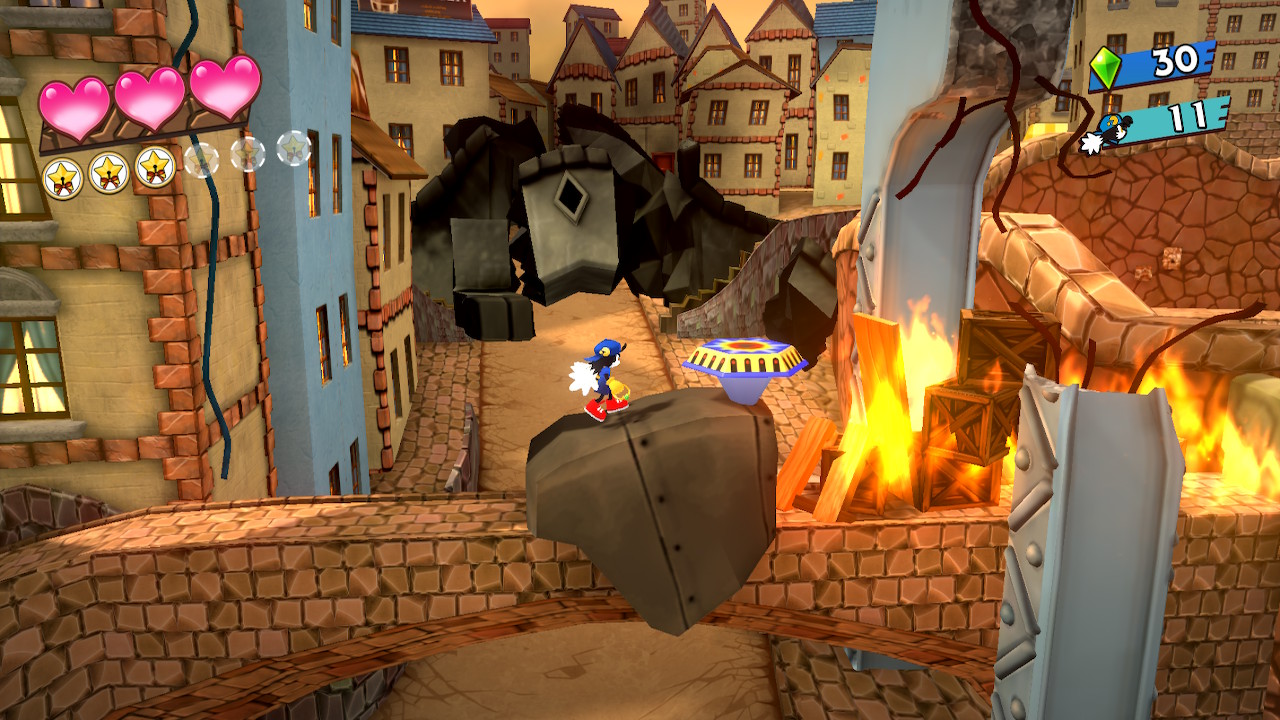 The high camera angle from the bounce looks amazing!

In an abandoned plaza, where we run into a giant version of the spikey creature, which we haven't seen since the Moon Kingdom. 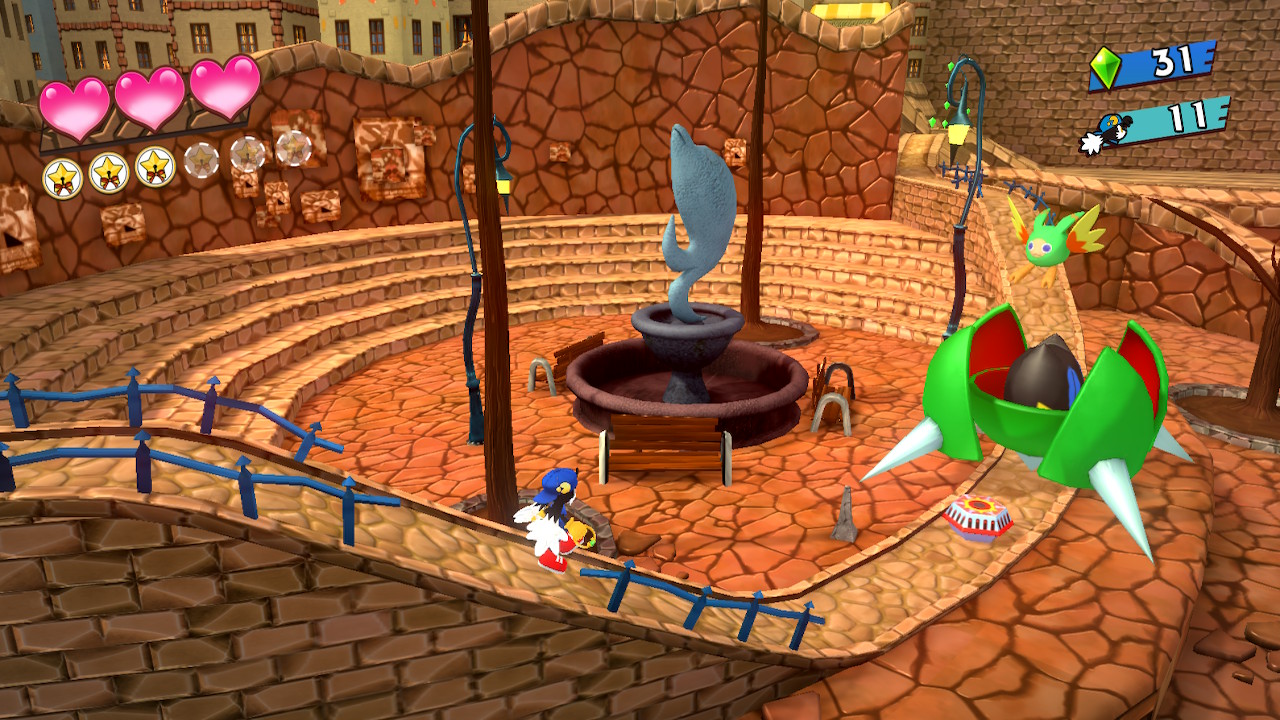 Unfortunately, the dolphin statue in the middle gets blown up too! One local runs away before impact!

We cross a polluted river next, a biplane crossing way in the background. I have nerves of steel at this point.

Thankfully, a manhole takes us back underground, away from the warzone!

We encounter our first Erbil! 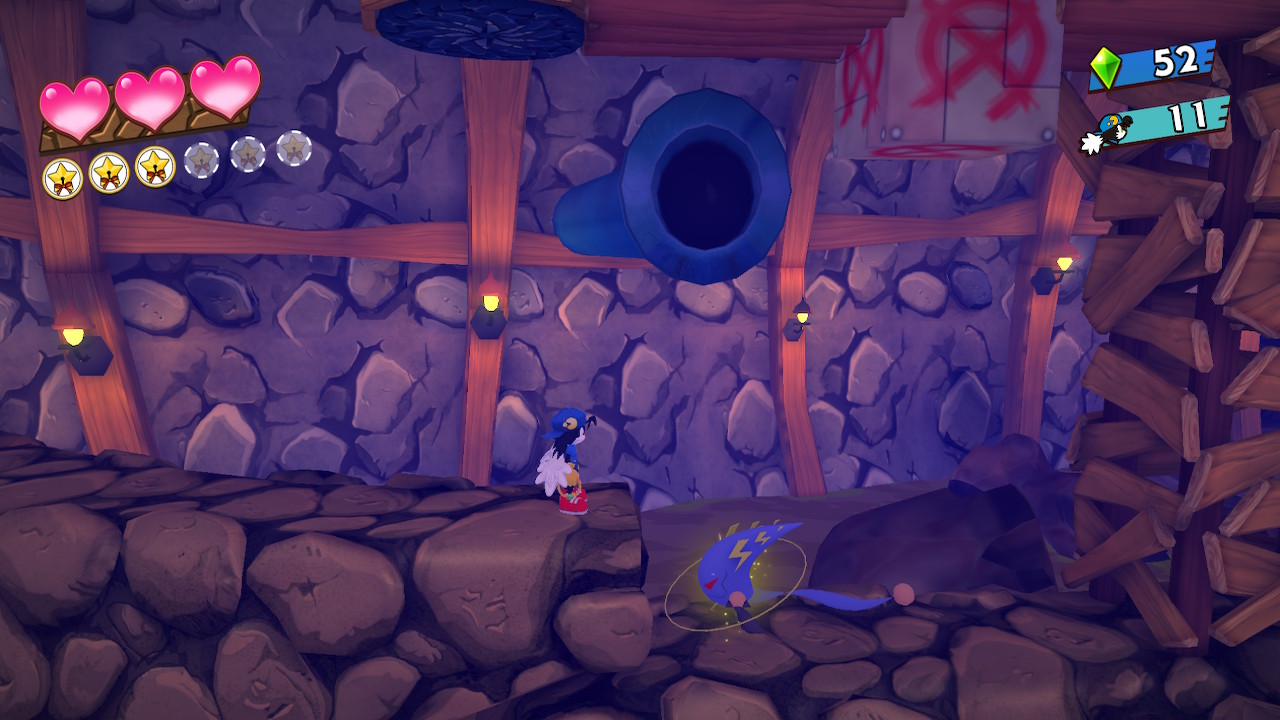 We use the creepy, grinning electric creature to push-jump us to the higher area, breaking a box!

Another Erbil obstacle here, as the way is blocked by a bunch of flying Moos!

We run into a trio of creatures! 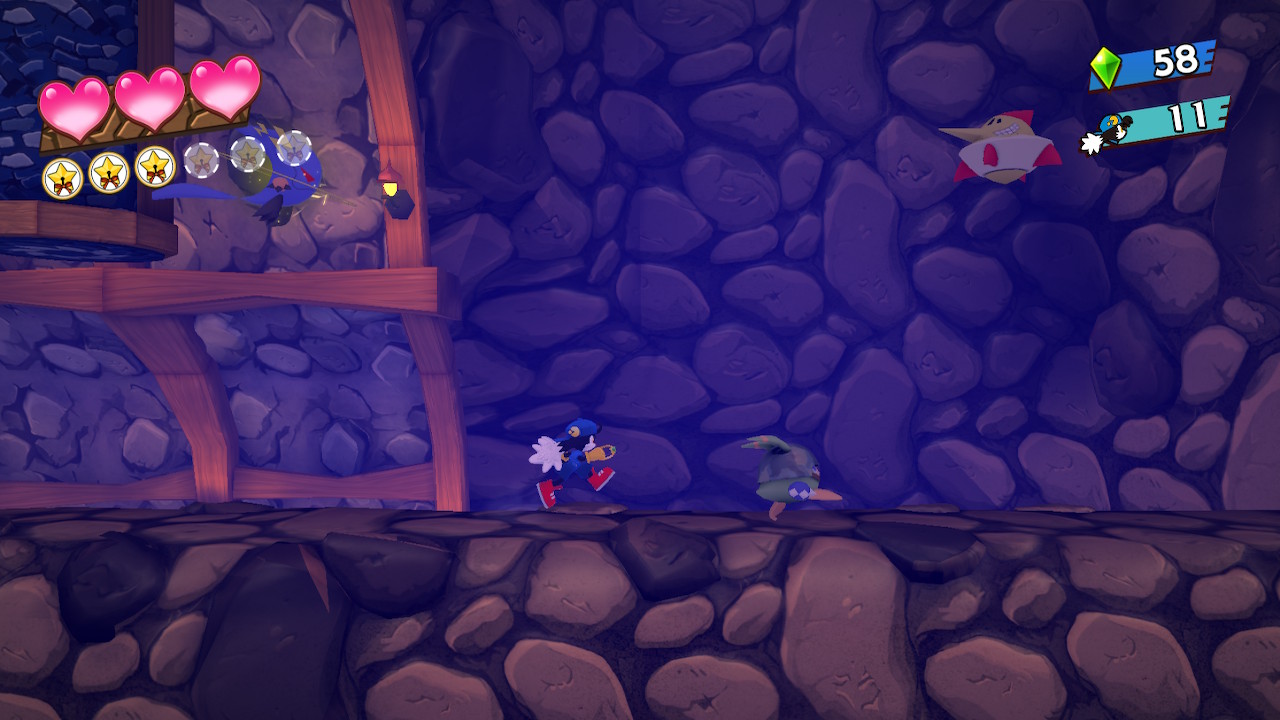 I take the Moo to get to the Erbil and use the creature to gain access to the higher area. 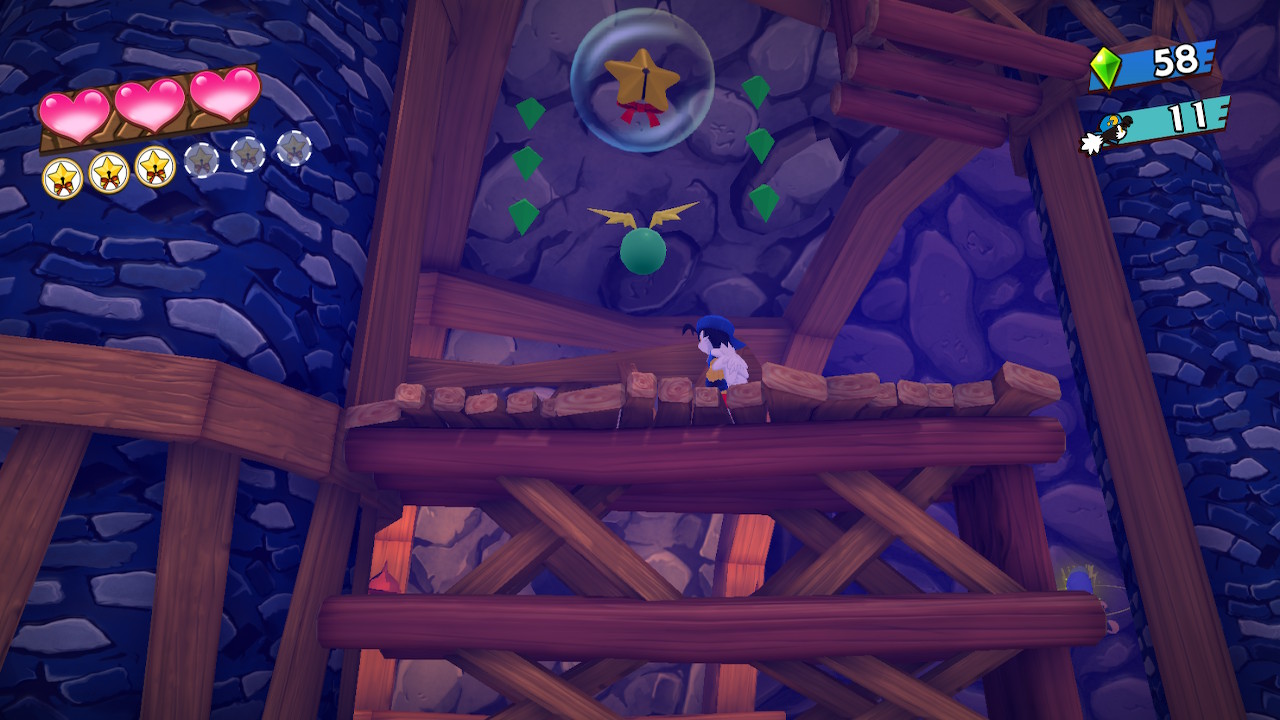 Jetimo time, but thanks to the lighting, we miss our chance, and I have Klonoa land back down to the previous area. 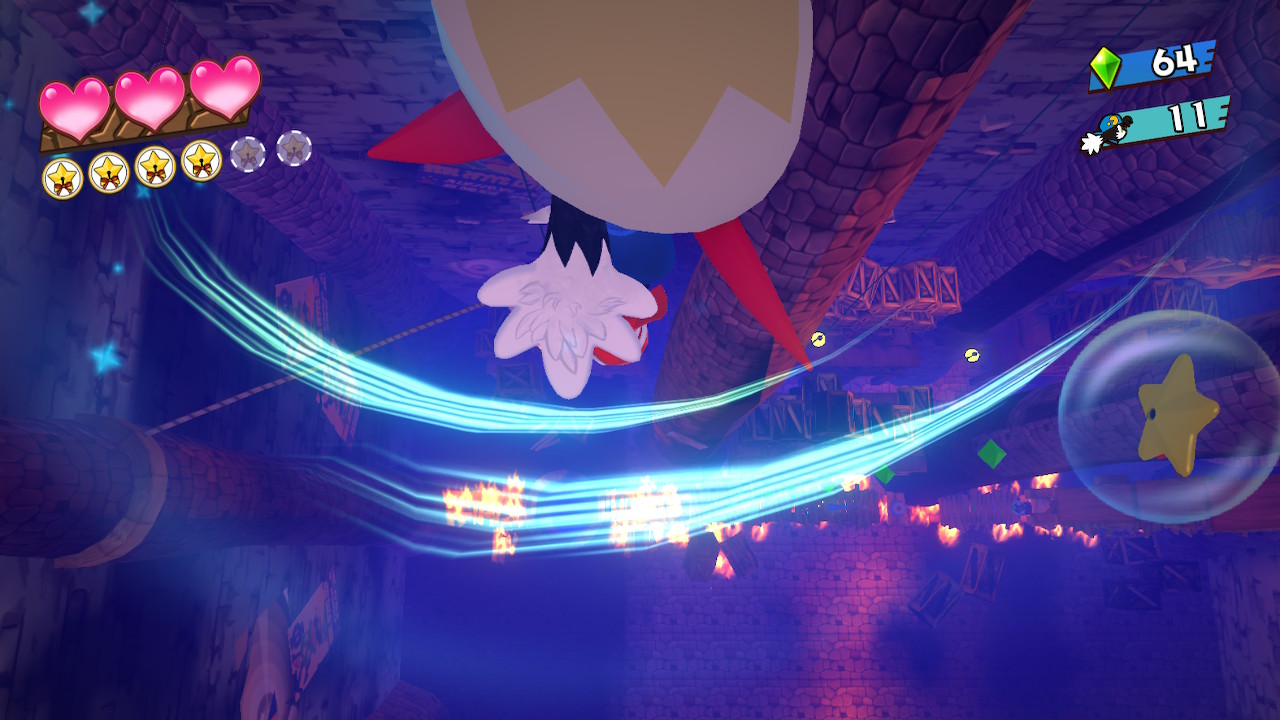 ...which fails, as Klonoa lands on the fiery rubble!

Getting the fifth doll and falling to safe ground is a bit tricky. I sort of remember having a hard time with this part in previous playthroughs.

Lucky we get to keep the doll piece even after a life lost.

Third time, as the old saying goes, is the charm, as we get doll piece number five, and land safely!

We come across another Erbil puzzle, and risk damage to break the box beyond!

We go to the cannon and our exit is near! 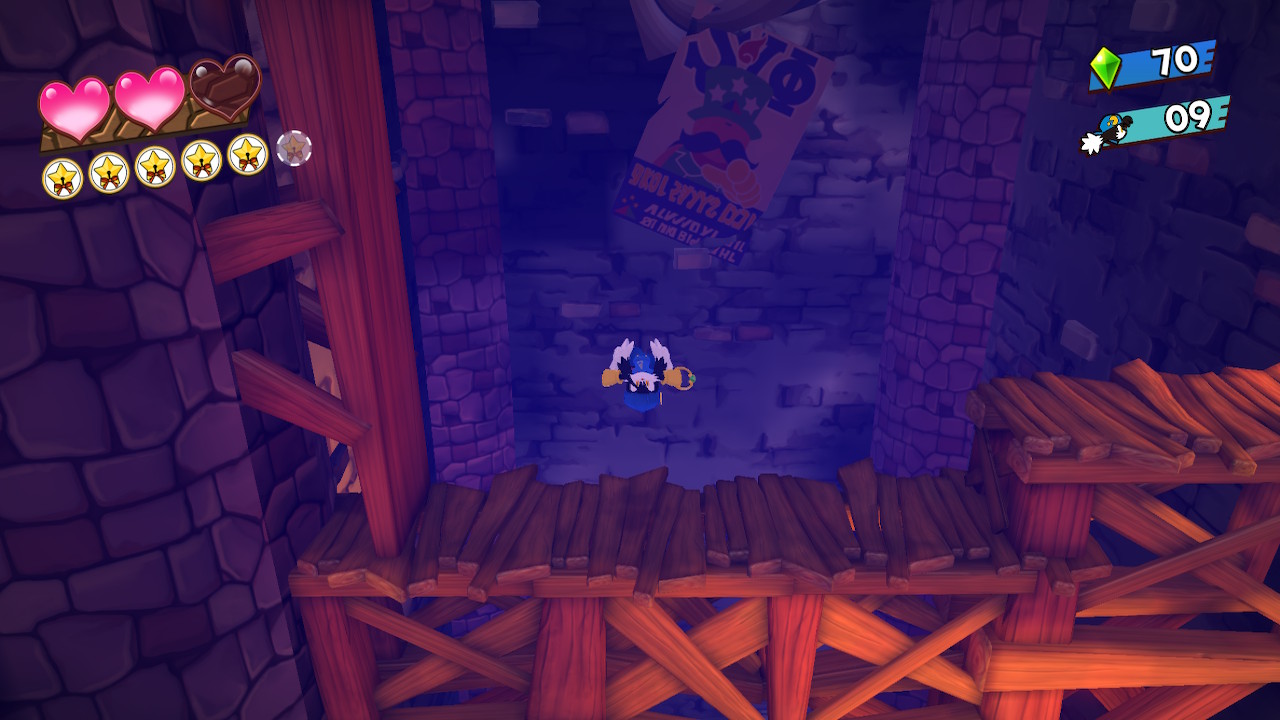 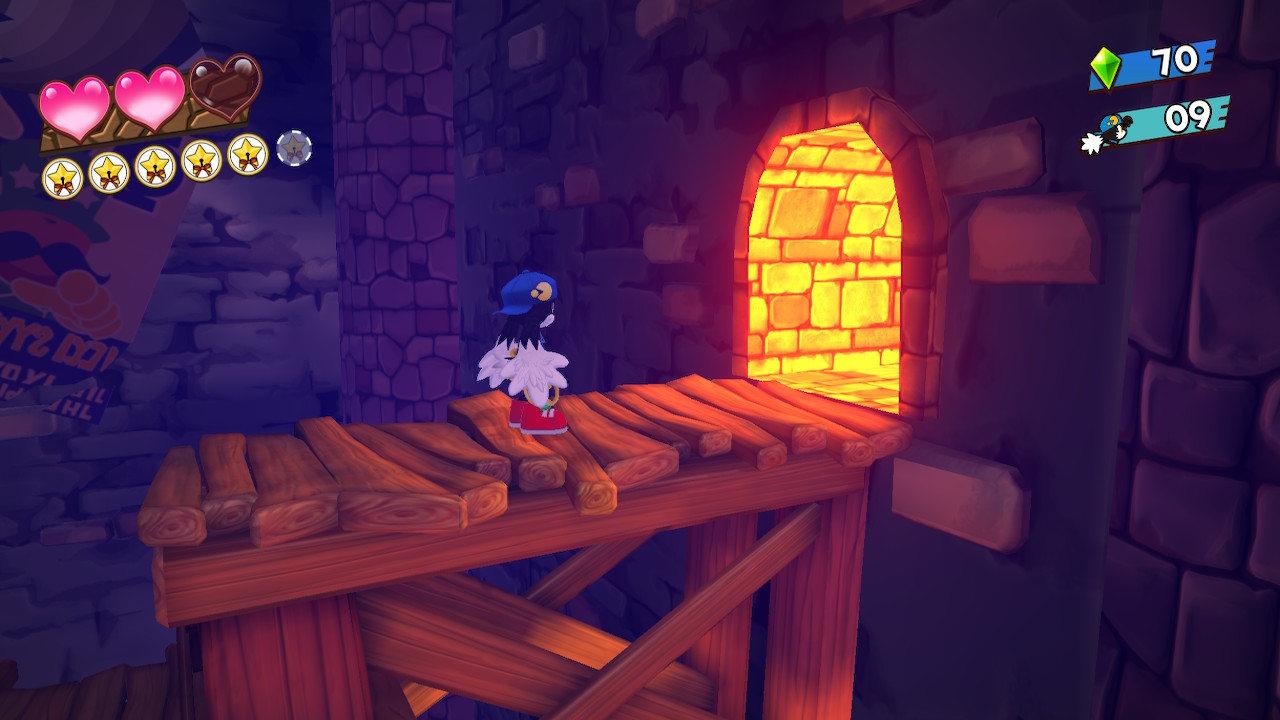 Jetimo number three awaits us, as we get thrust back into the rooftops of the city! 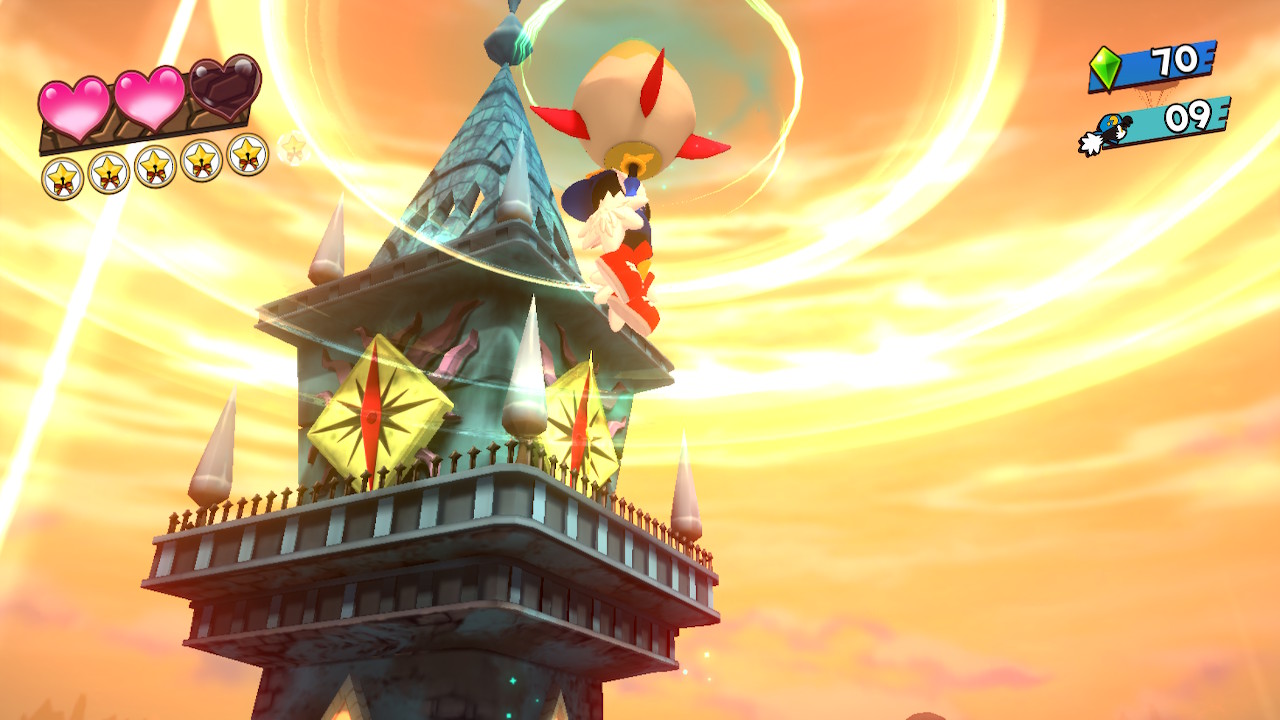 We run into more trampolines! 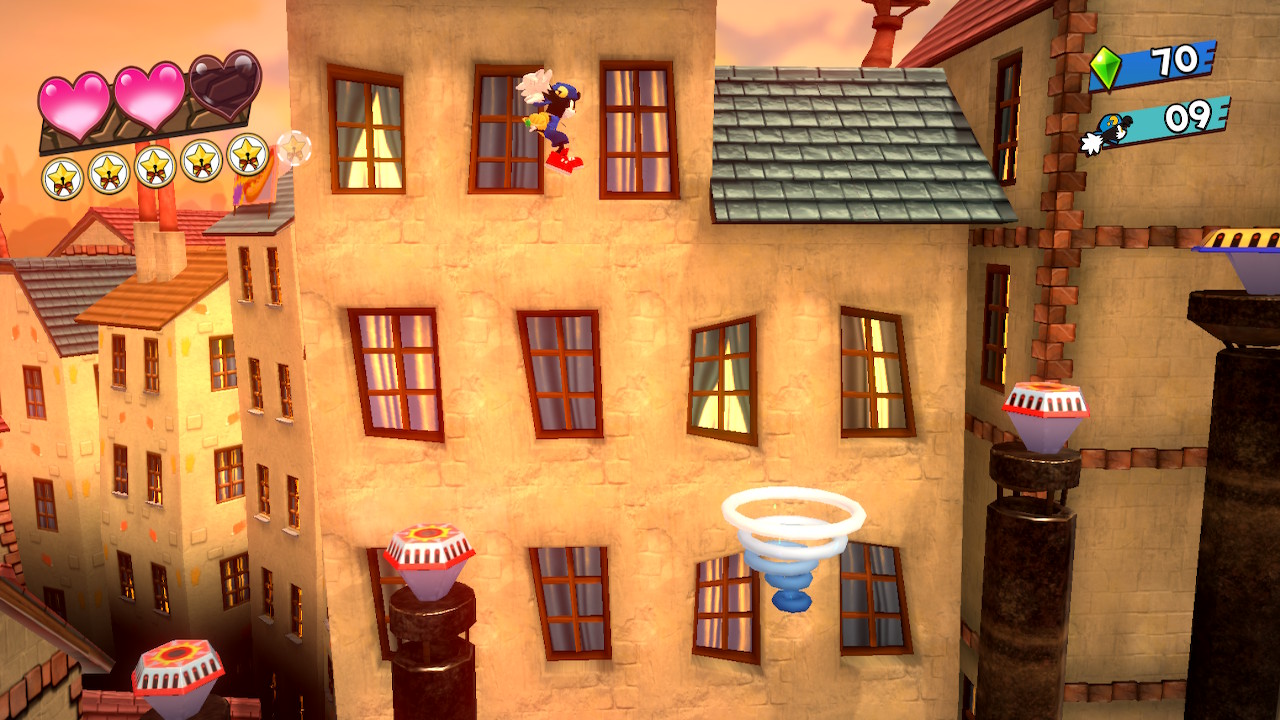 Along with our last doll piece!

Now for the cannon trip... 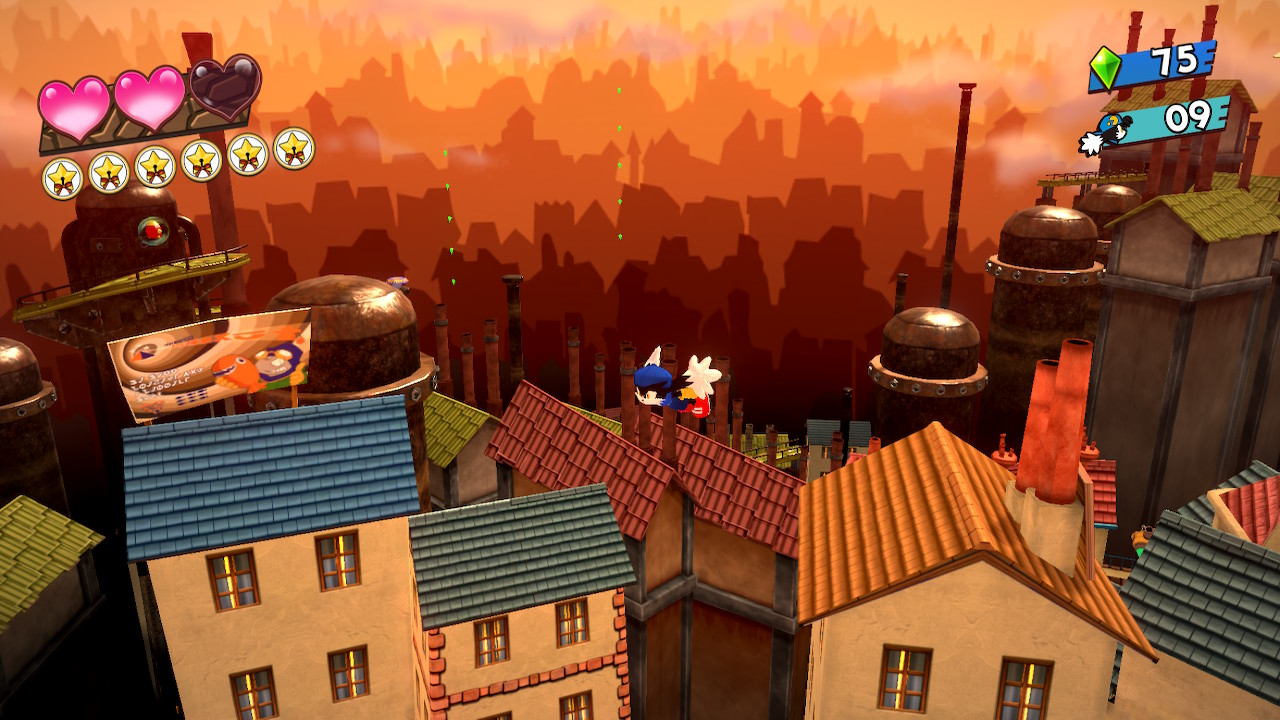 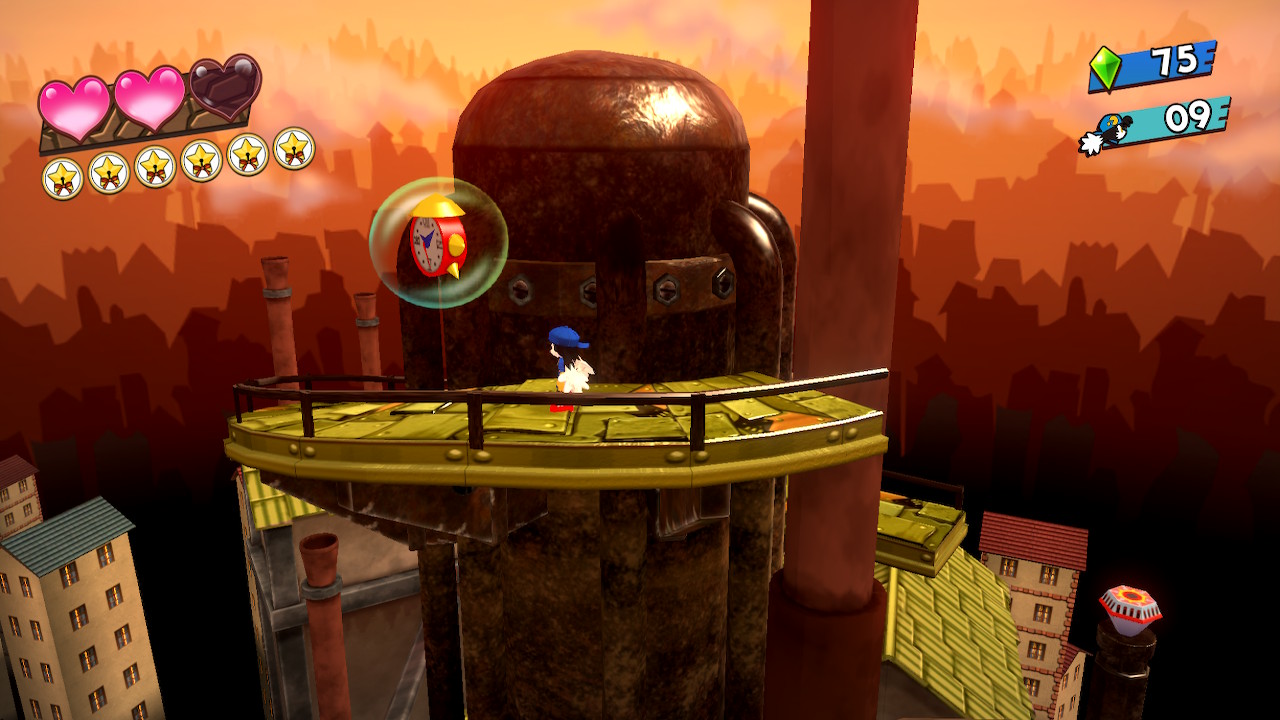 ...and we end up on a spiraling ramp!

Forward, more trampolines and mini-tornadoes! I'm feeling the tension at this part! 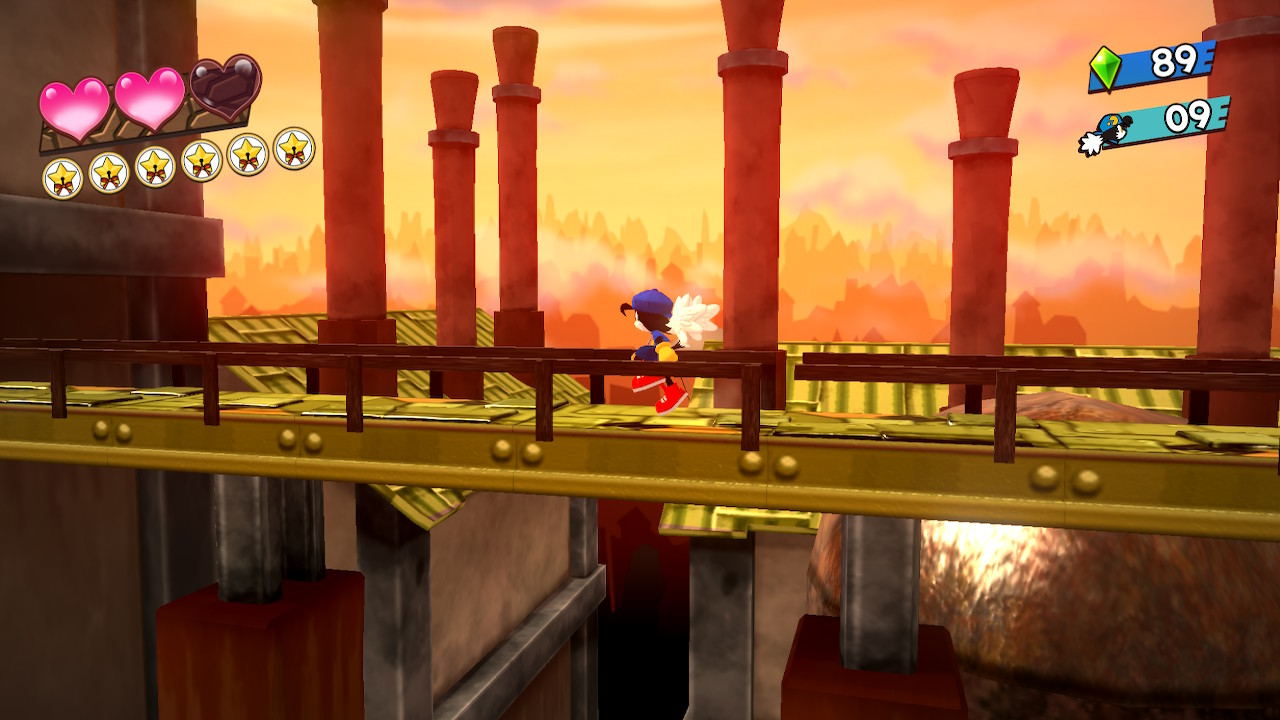 Hope this is where the reactor is. 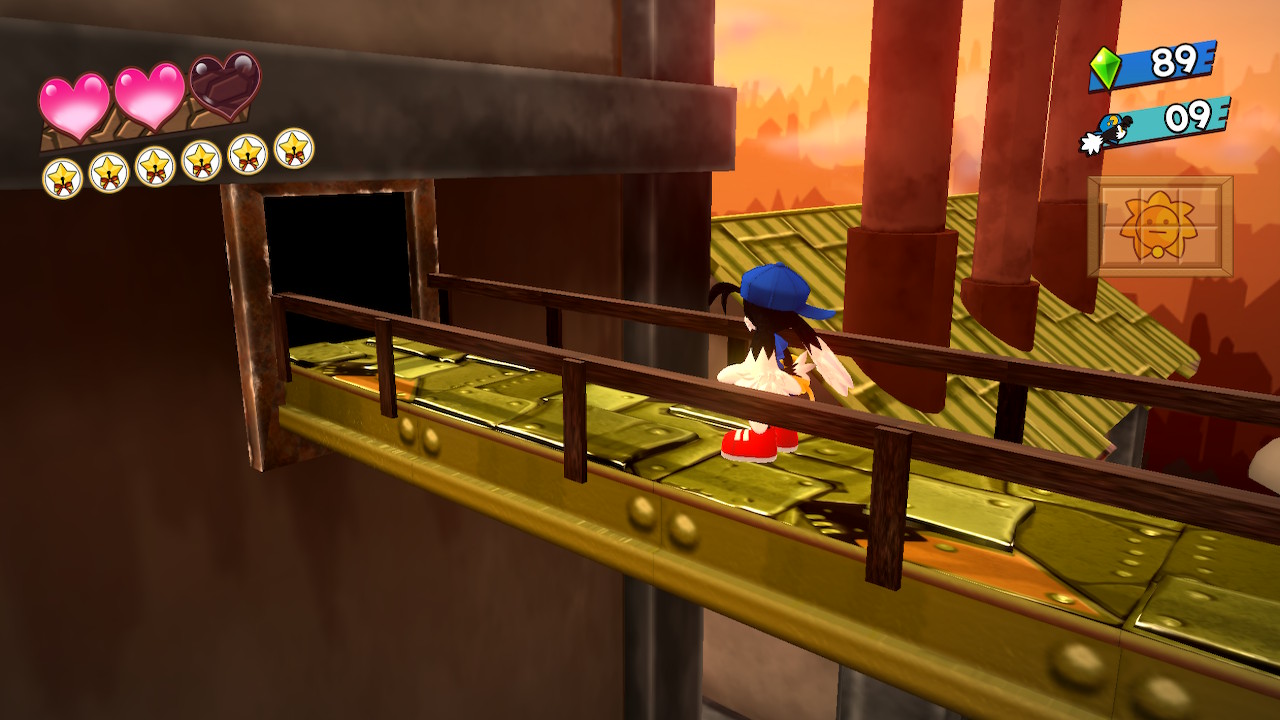 Nope, but where a cannon is. 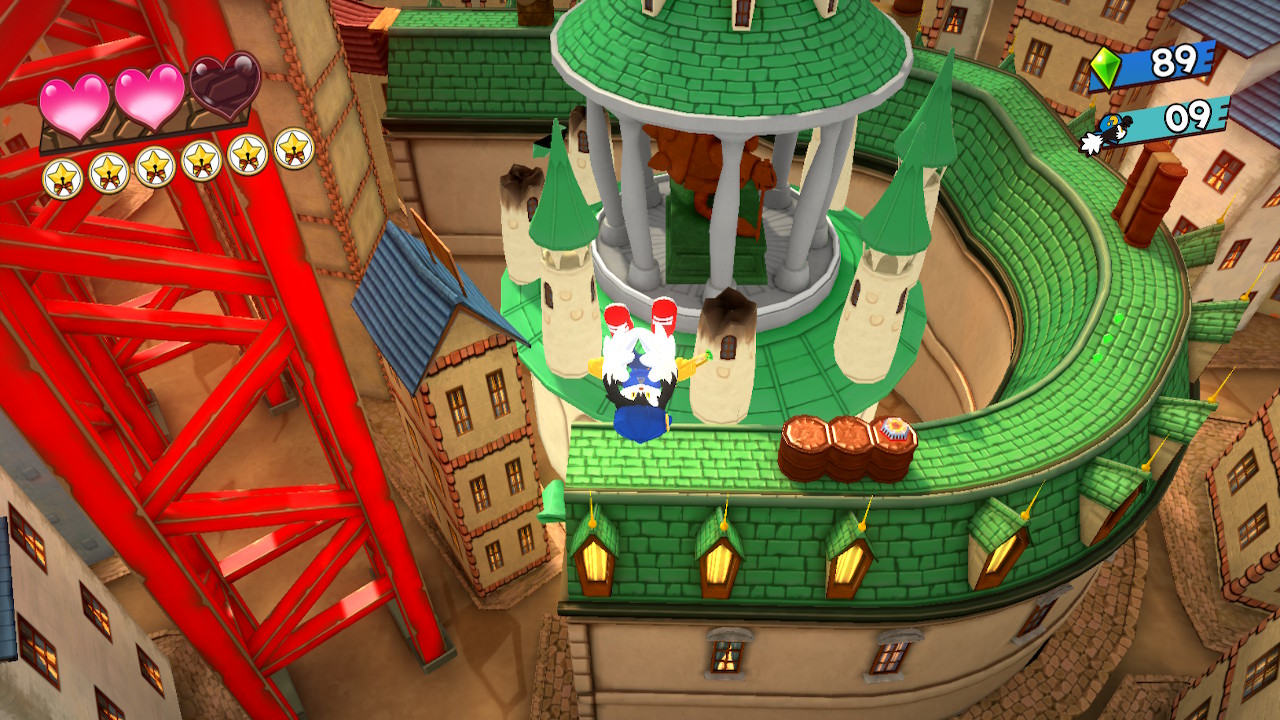 Klonoa is living up to his label (Klonoa of the Wind) with all of these big air moments!

A duo of giant creatures await, but we take care of them easily!

We avoid the Cannon Glibz duo and use the mini-tornadoes to make our way out of that rooftop. 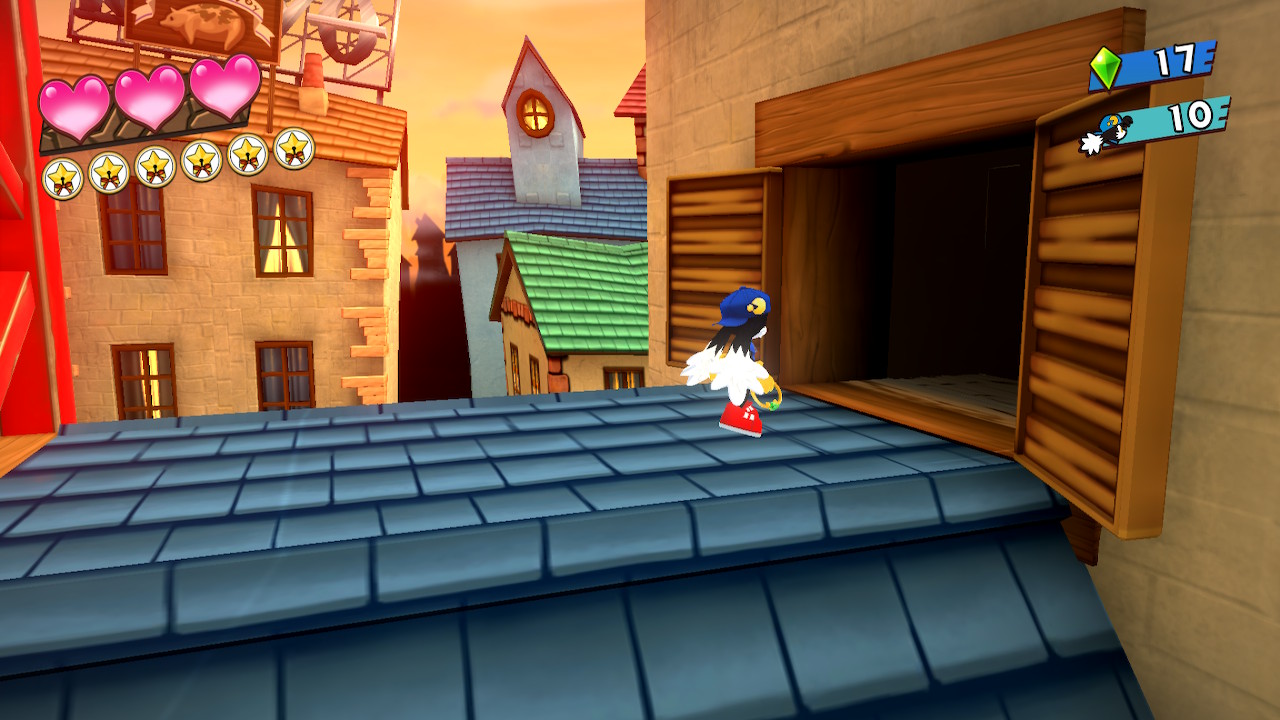 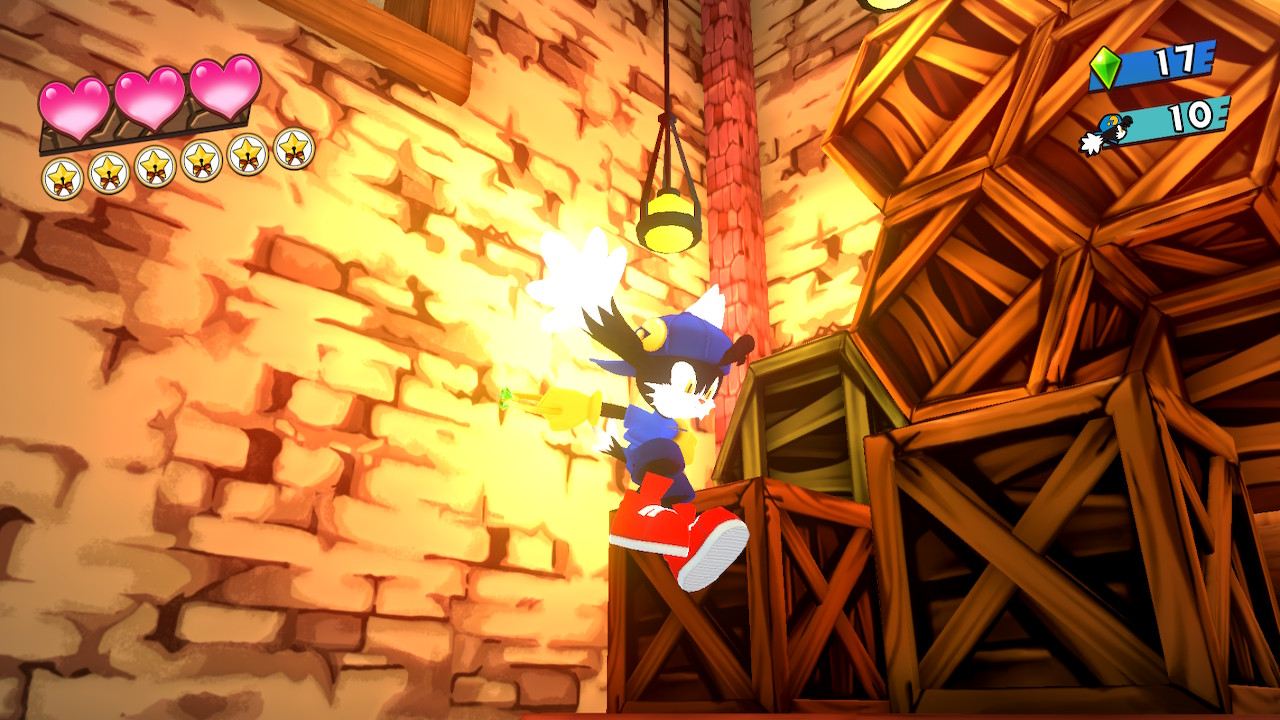 ...is not where the reactor is! 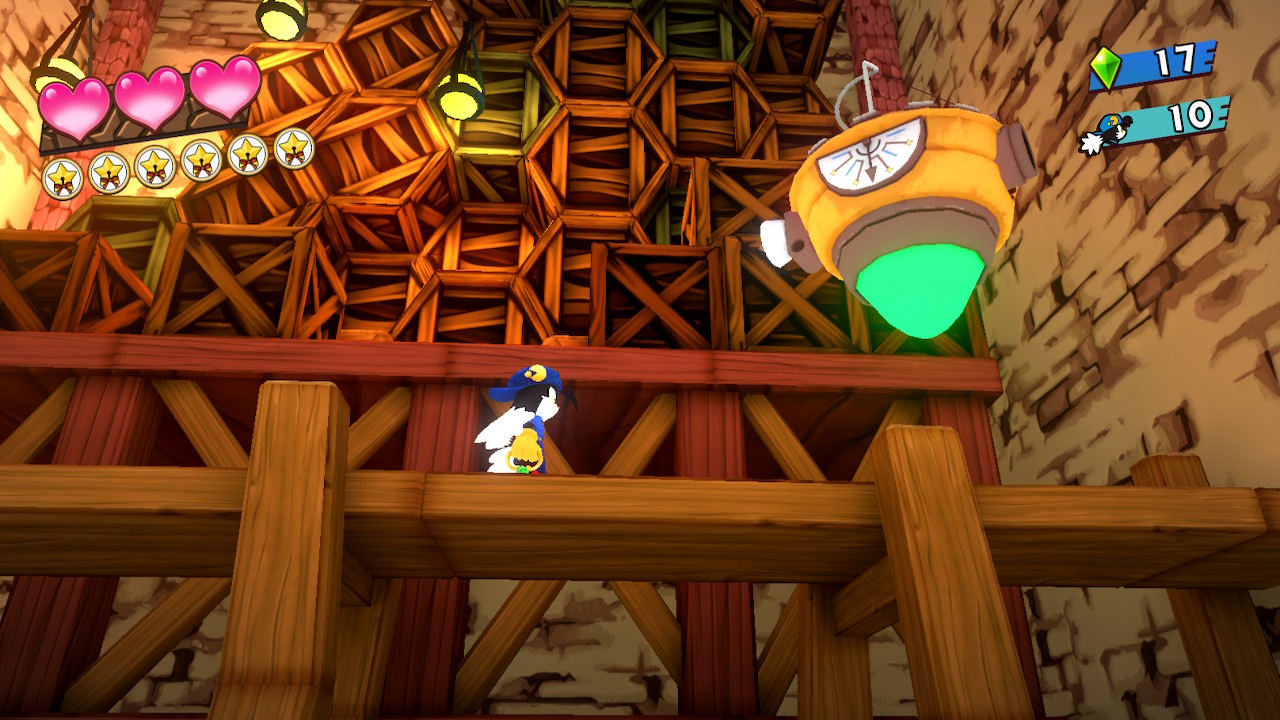 But with the cannon, and a Jetimo, we end up above a railroad in flames... 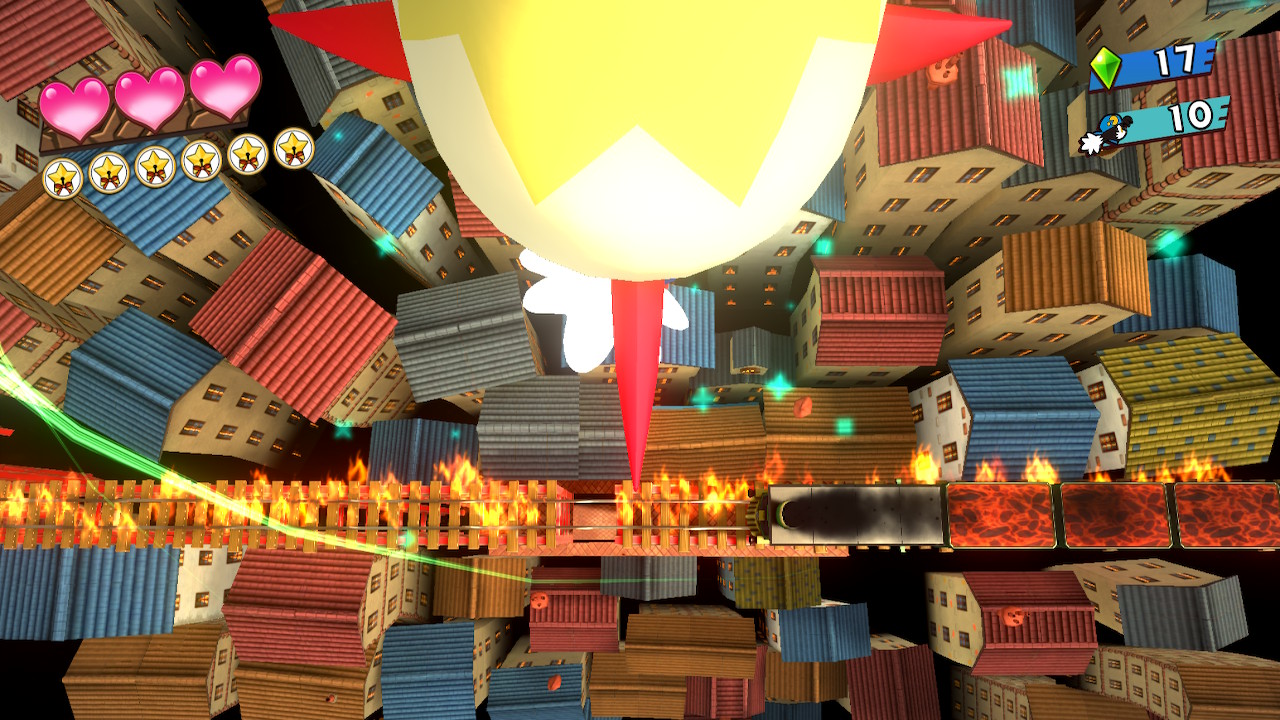 ...and land on top of a moving train! 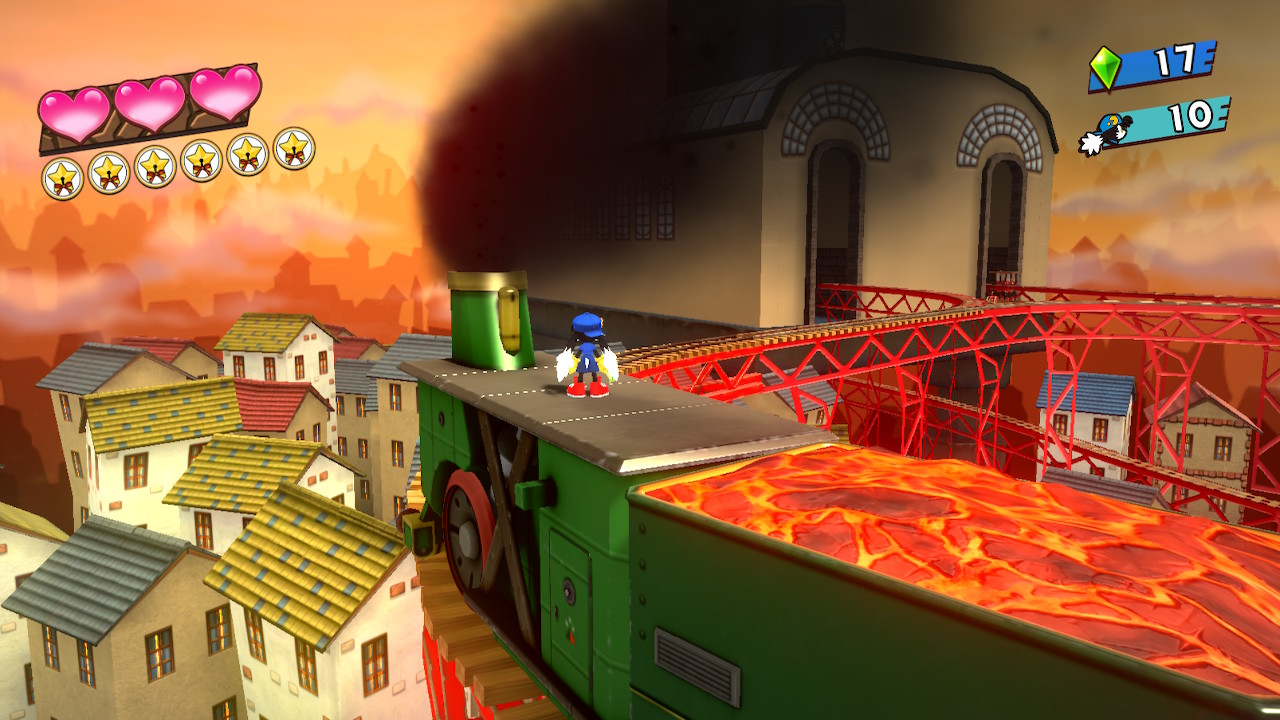 We make it to a stop. 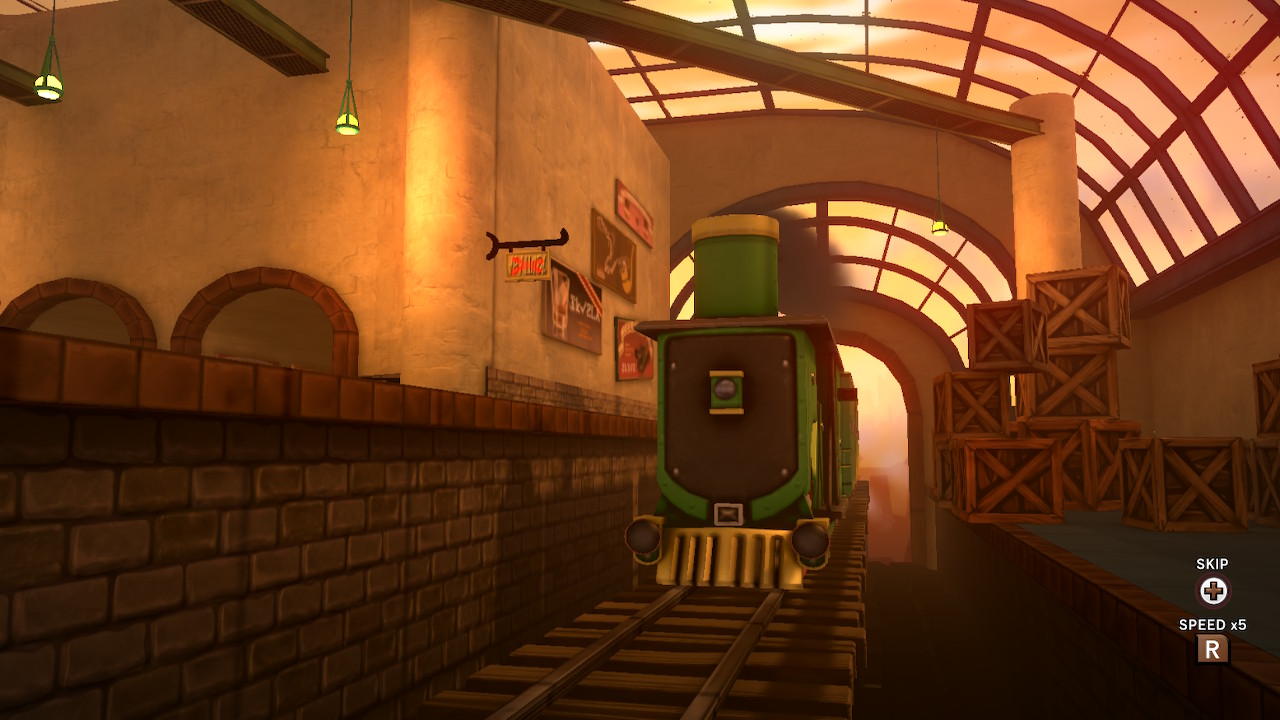 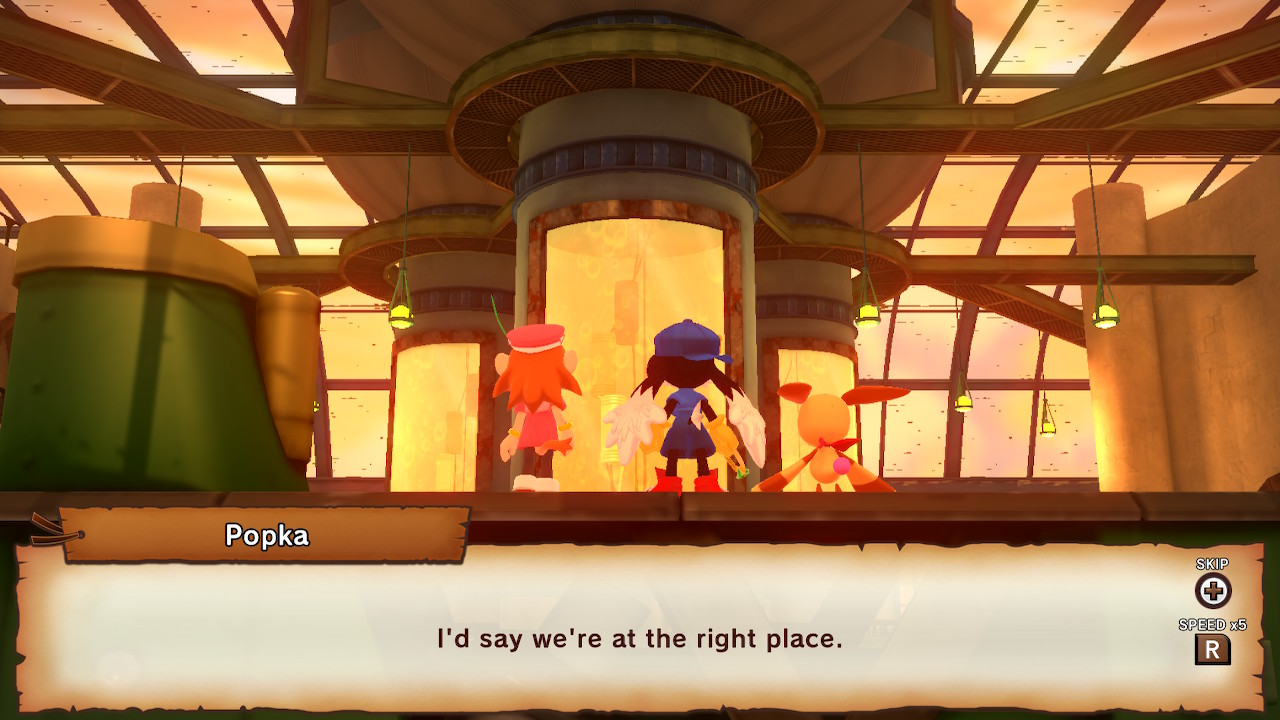 Yup, we definitely are here.

The gang shuts the reactor down.

I notice a typo from Klonoa's text after shutting down the reactor: he calls Volk's bell here "the Bell of Anger."

Now the underground's our next stop. 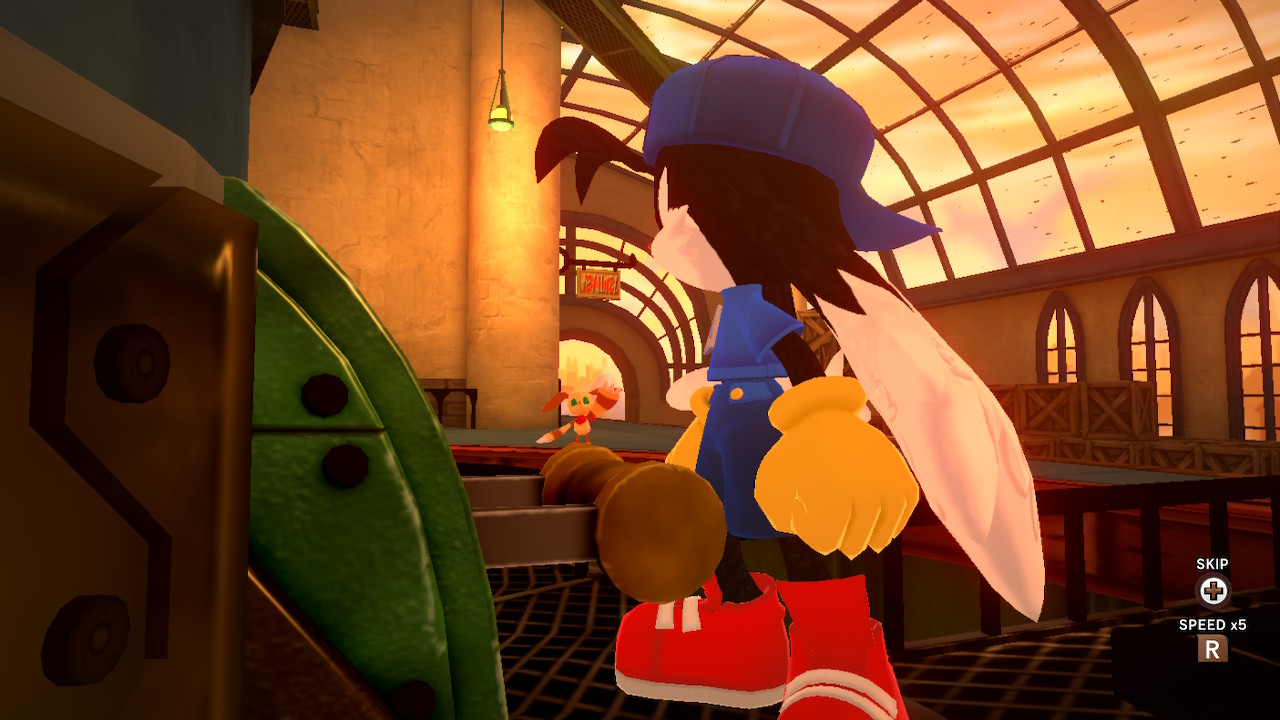 Here's the music for this place, the drums and the brass section are prevalent (Volkies Song), along with the same theme when in the sewers (Under the Frontline).