It seems we're currently at the center of the game's map.

I have Will enter the silver gate.

Oh great, it's this guy again! 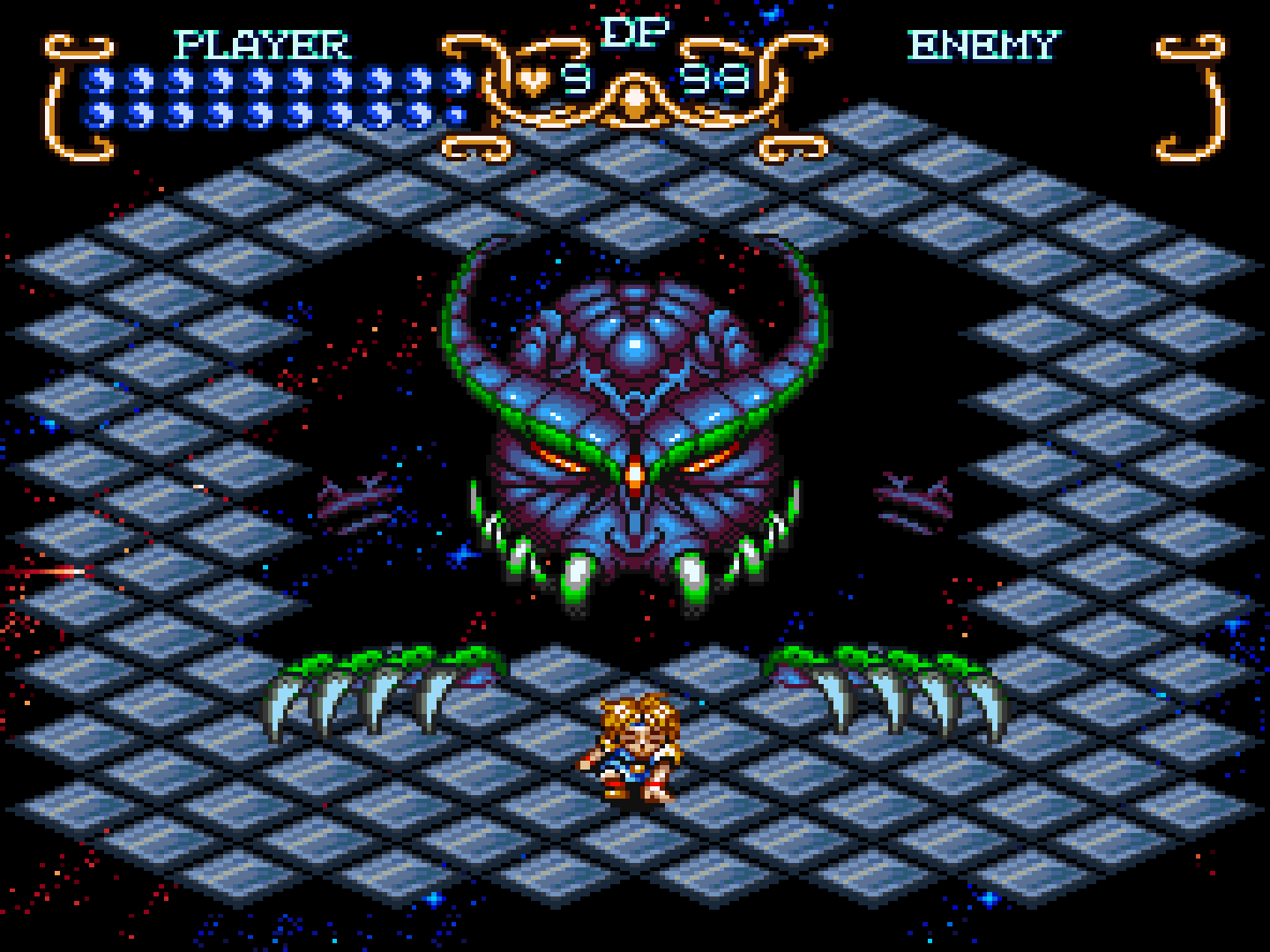 Will kneels, and transforms into Shadow!

I am so ill-prepared for this match!

I lose and recover back to half-health!

I keep losing against this boss, like before! How did I manage to win against him last time?

At least with Shadow, he's easier to hit!

On the fourth try, I end this boss once and for all! 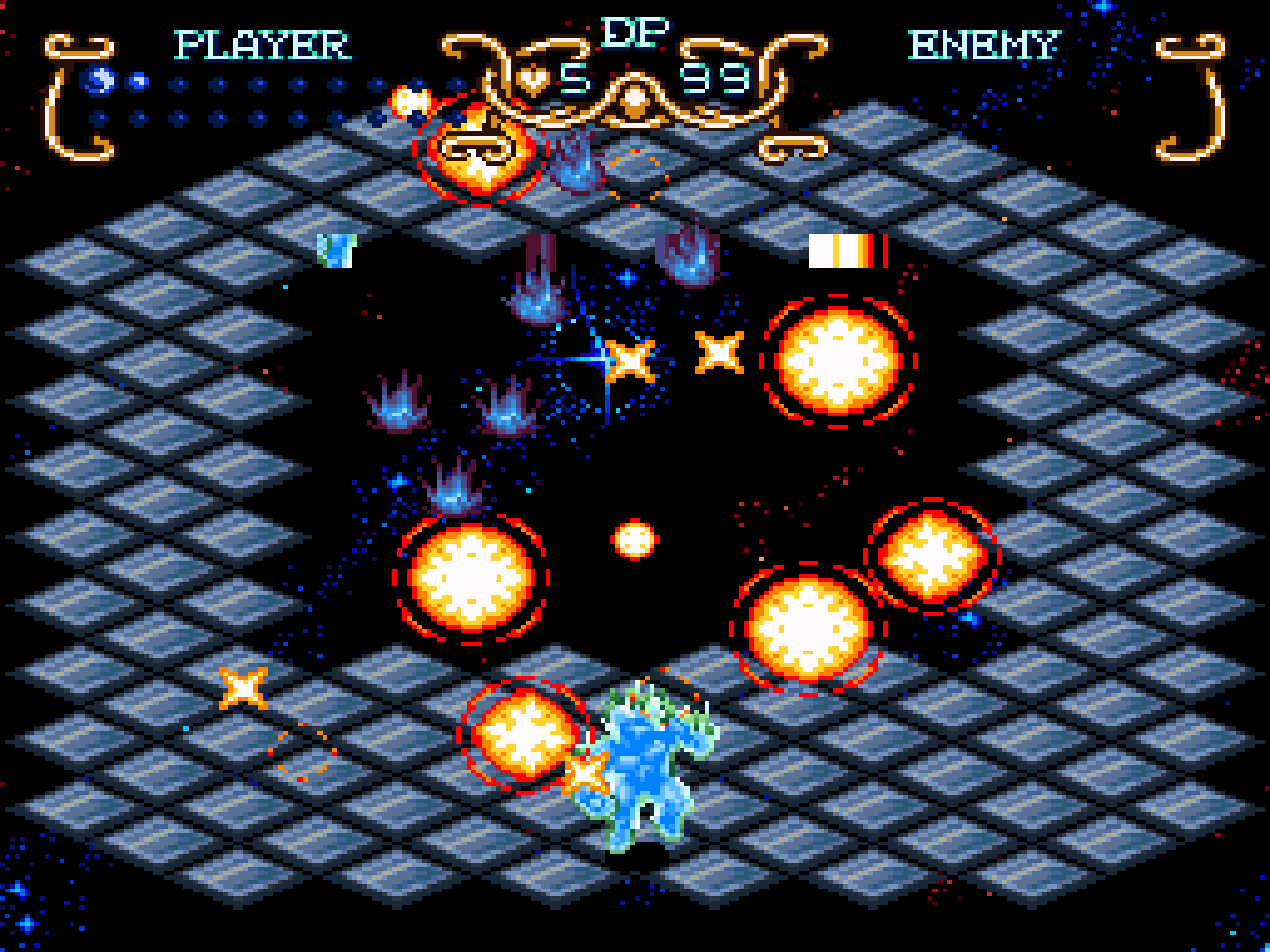 I heal and save once more. 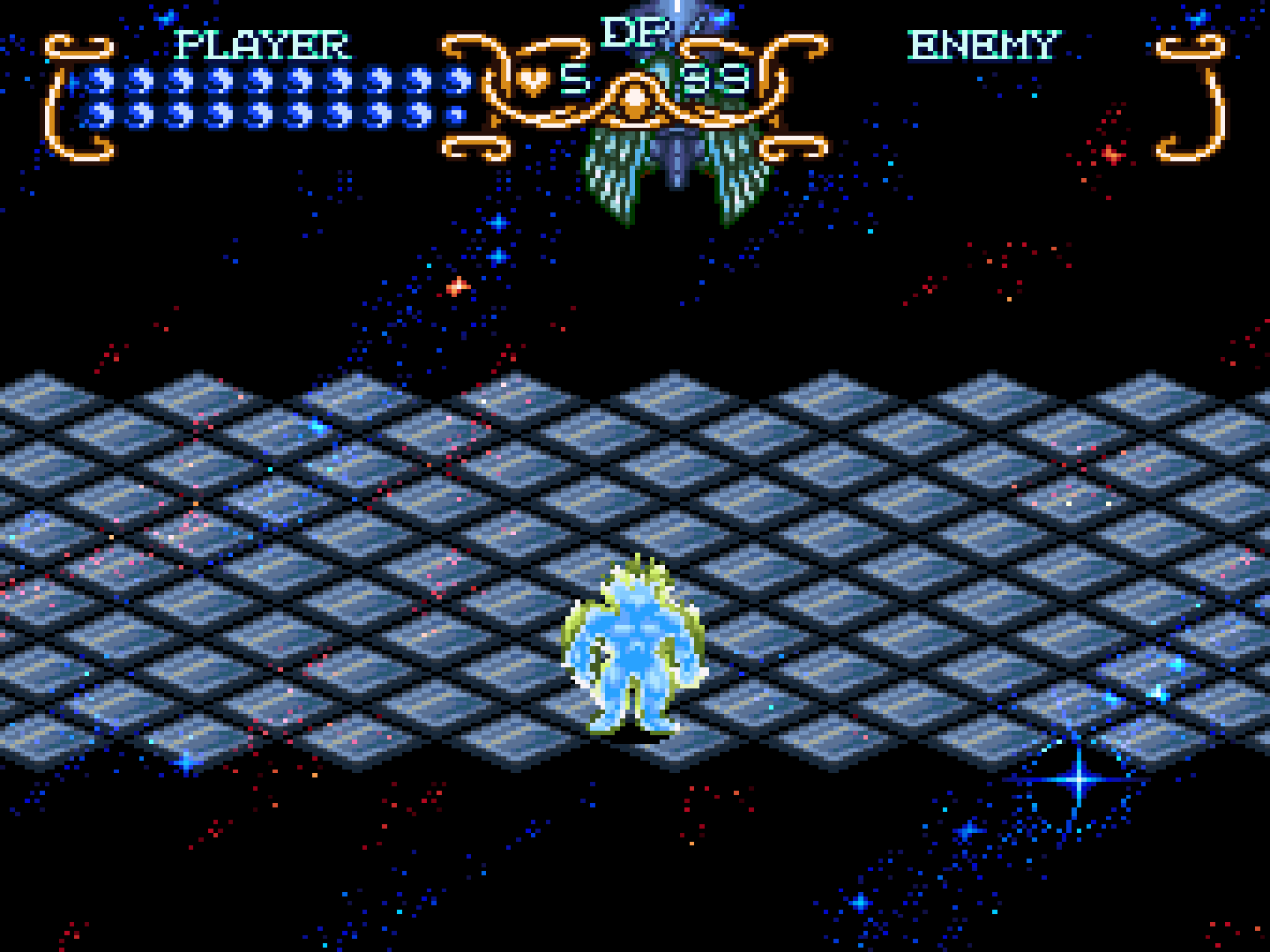 Like the last time we fought him, that boss was easy! Maybe even easier, thanks to Shadow!

Since we fought five bosses so far, I'm guessing we're going to have three more rematches...

Now we're in another room... 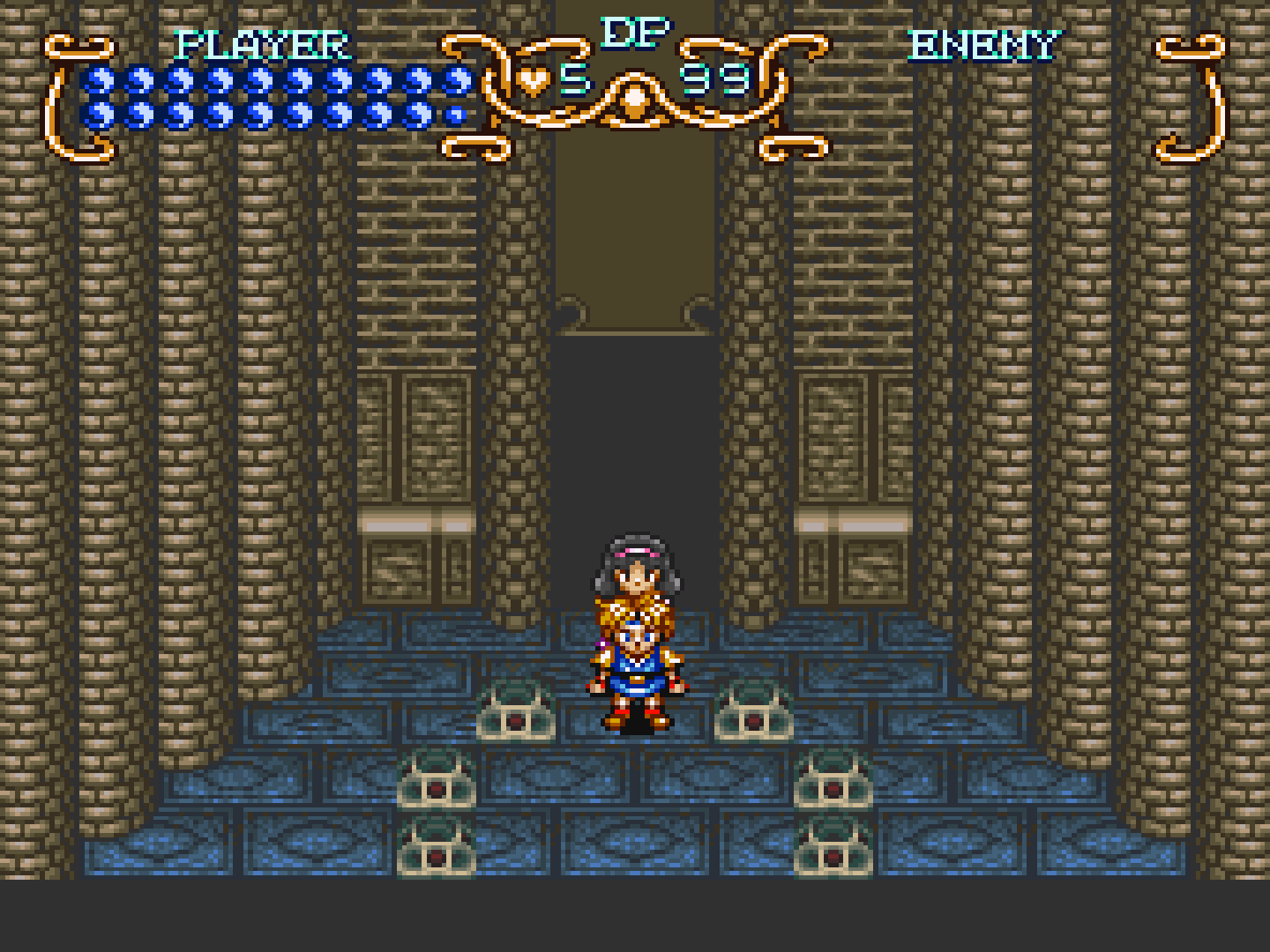 As Will gets closer, something happens... 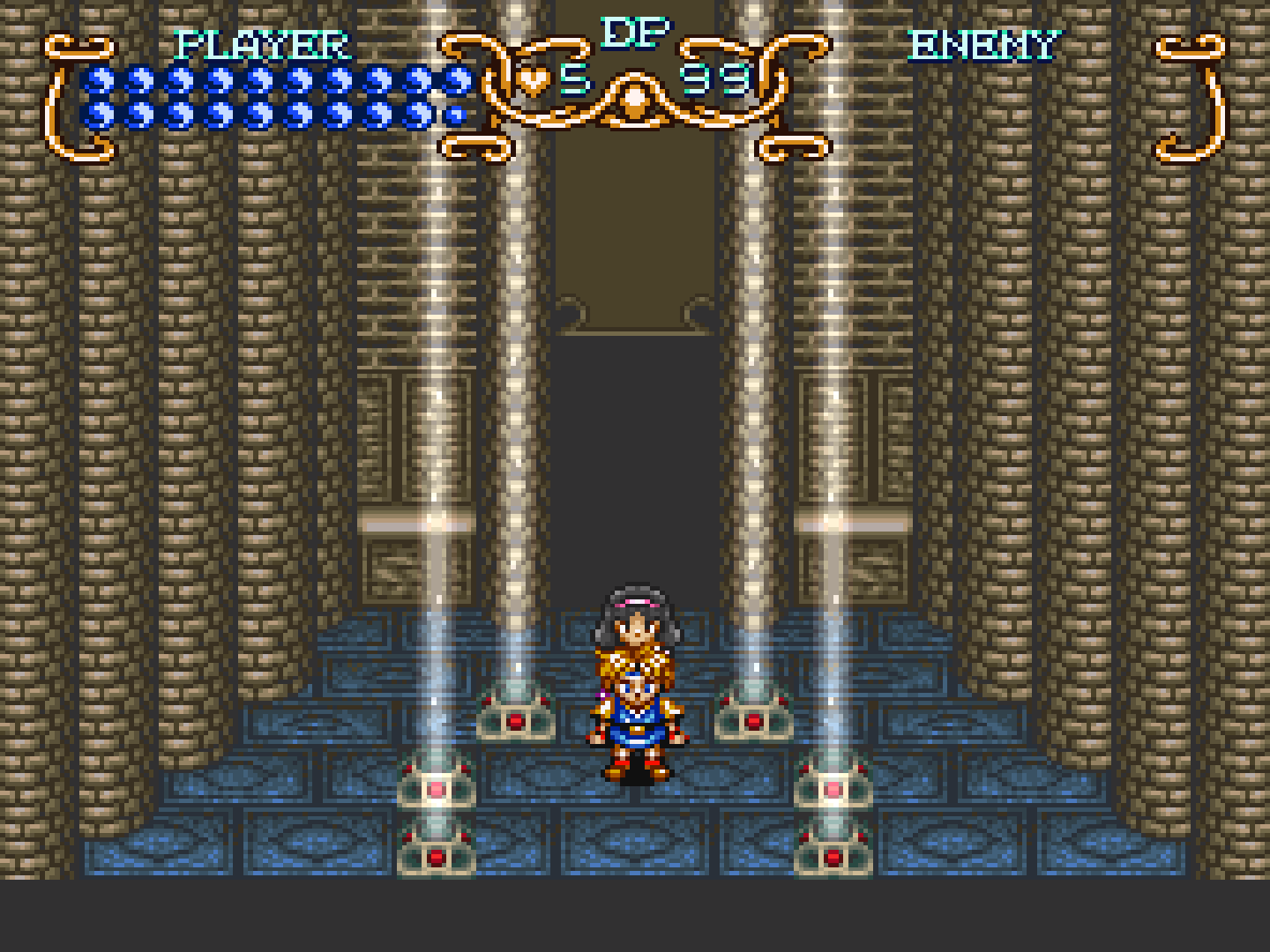 Pillars of light emanate from the corners... 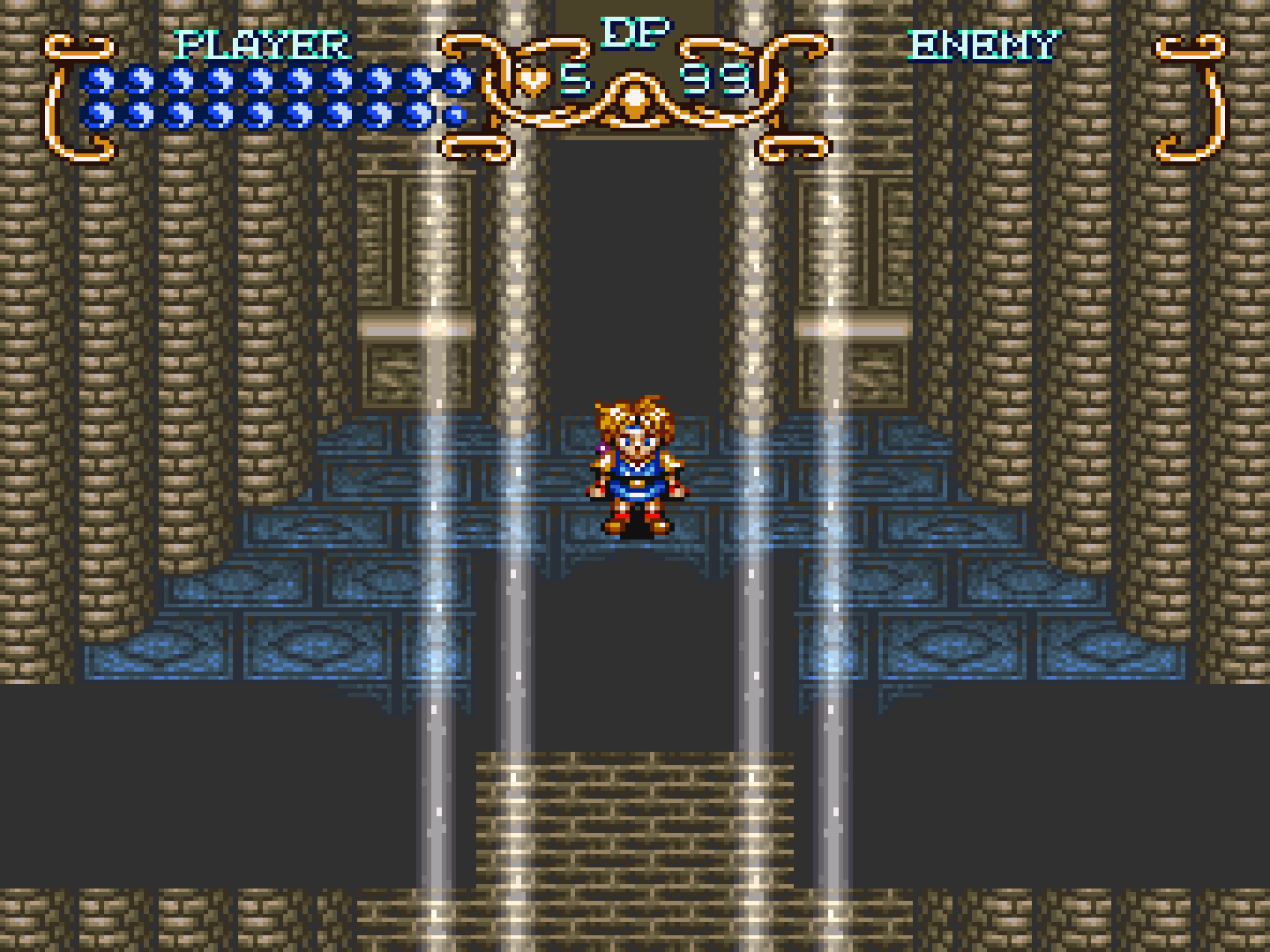 I wonder how many floors we passed?

I'm guessing we're going to have to fight those Vampires again... 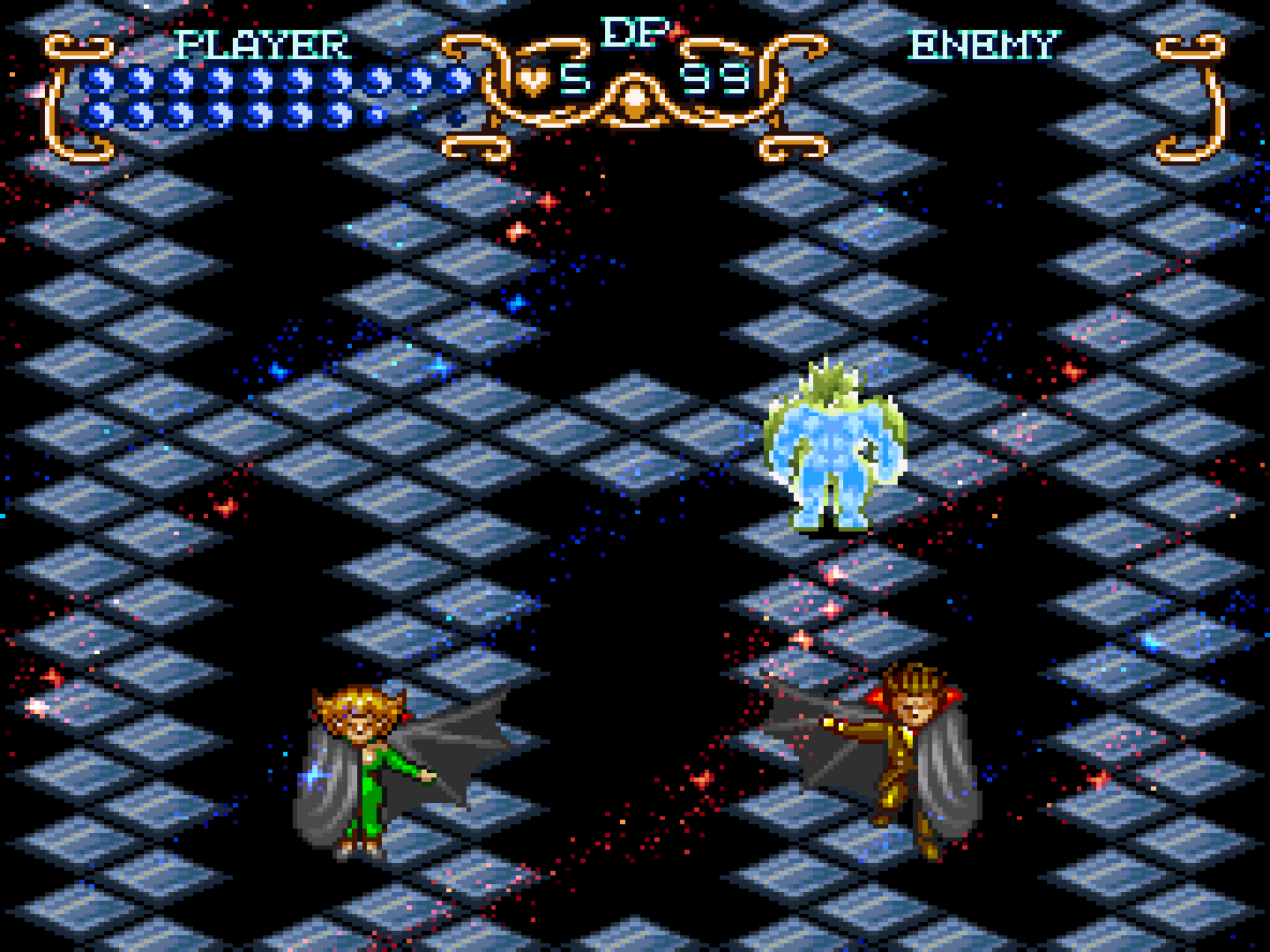 ...and we are, except we're using Shadow, and there's no time limit this time!

These vampires, even with Shadow, are still just as difficult and frustrating to take care of like last time!

I reset back to my quicksave, and I finally destroy the Vampire, but I'm low on health against the Vampiress!

Oh my god, not again! 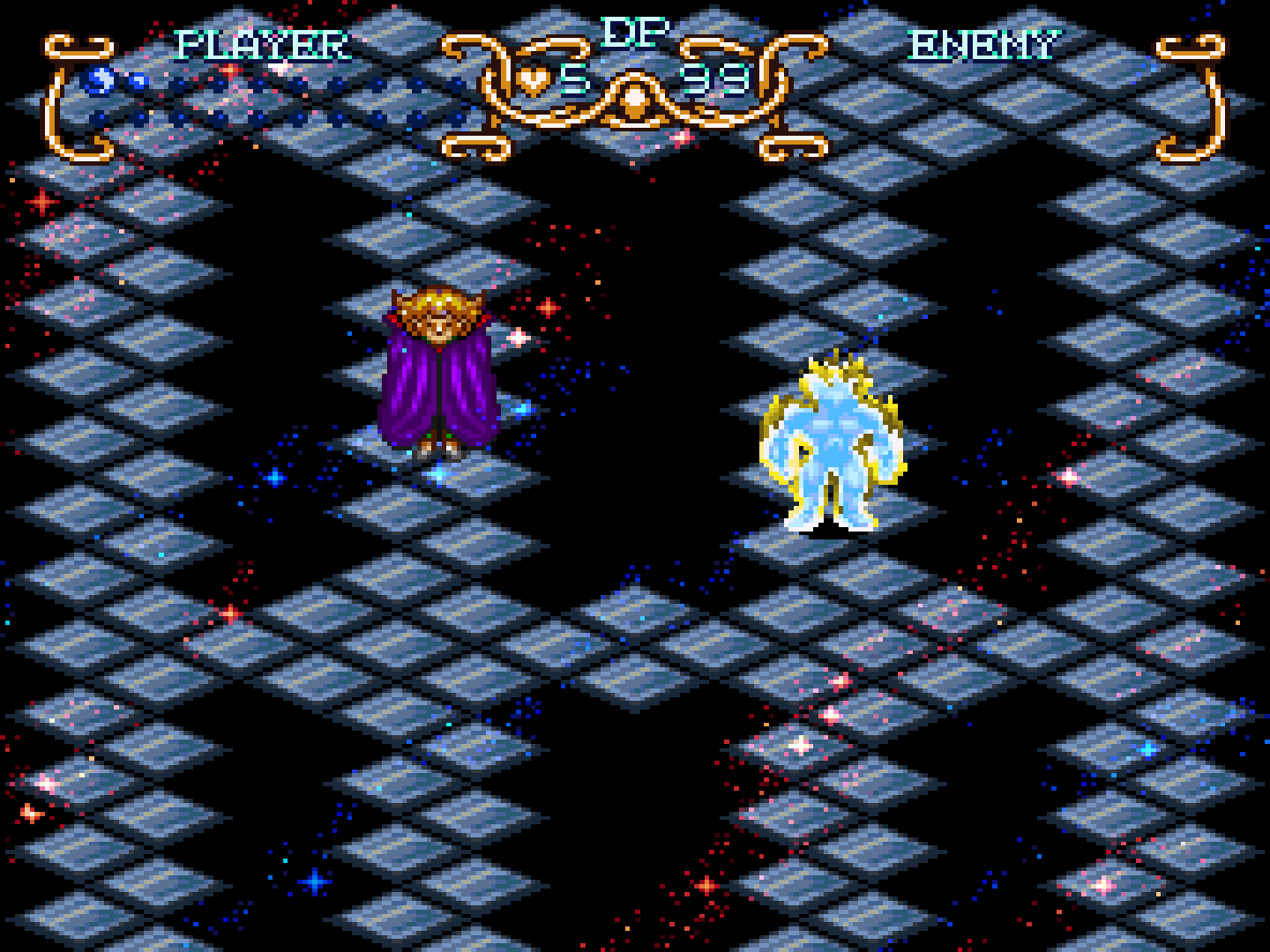 After using up an herb, and a lot of chasing about, we finally take care of the Vampires, the hardest part of this game!

No more herbs to save us now...

And we can't turn back at this point! 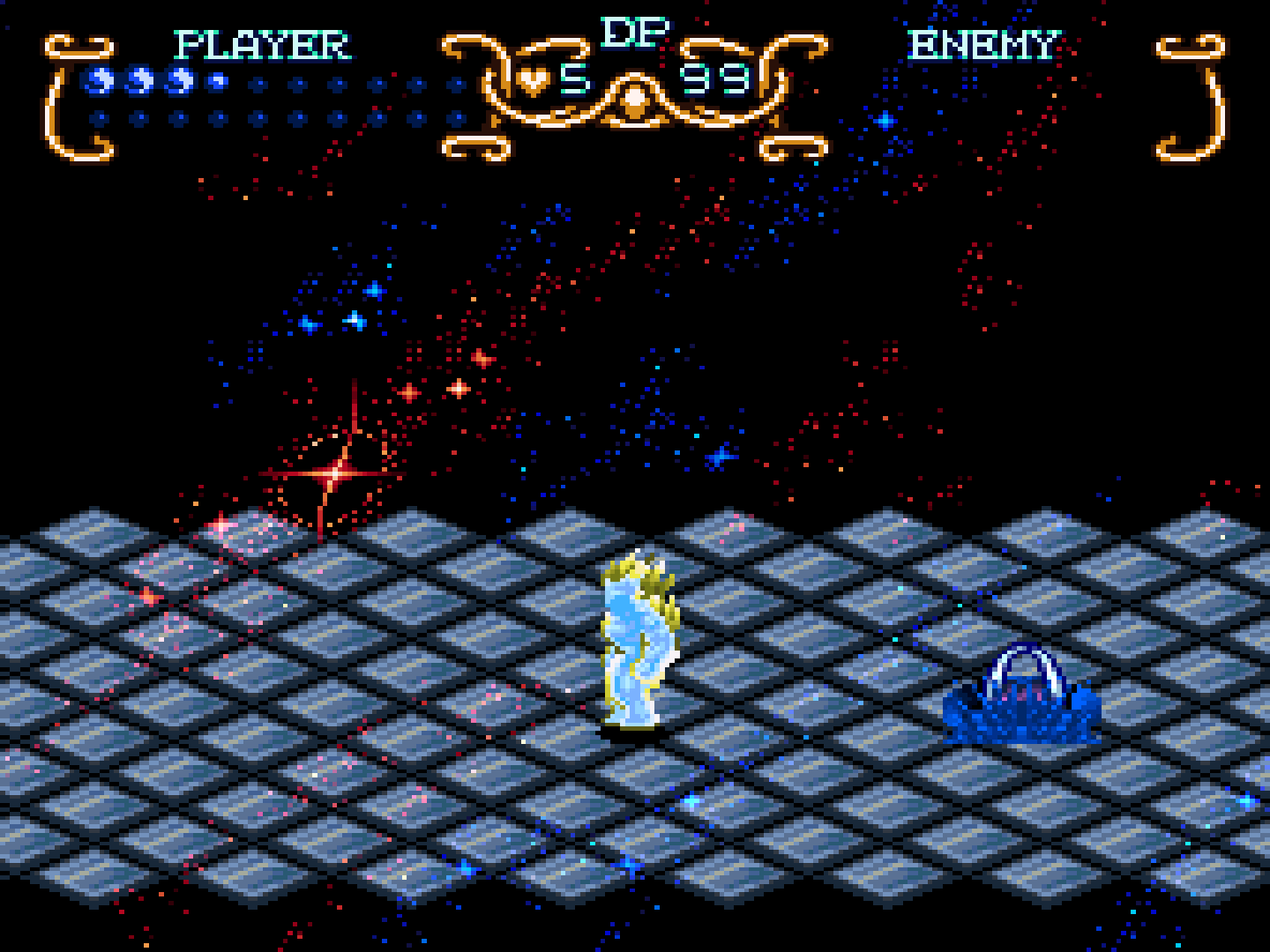 But the Sand Fanger scores one against us! Since we were low on health, that put us at a disadvantage.

Round two, this time, at half-health again! 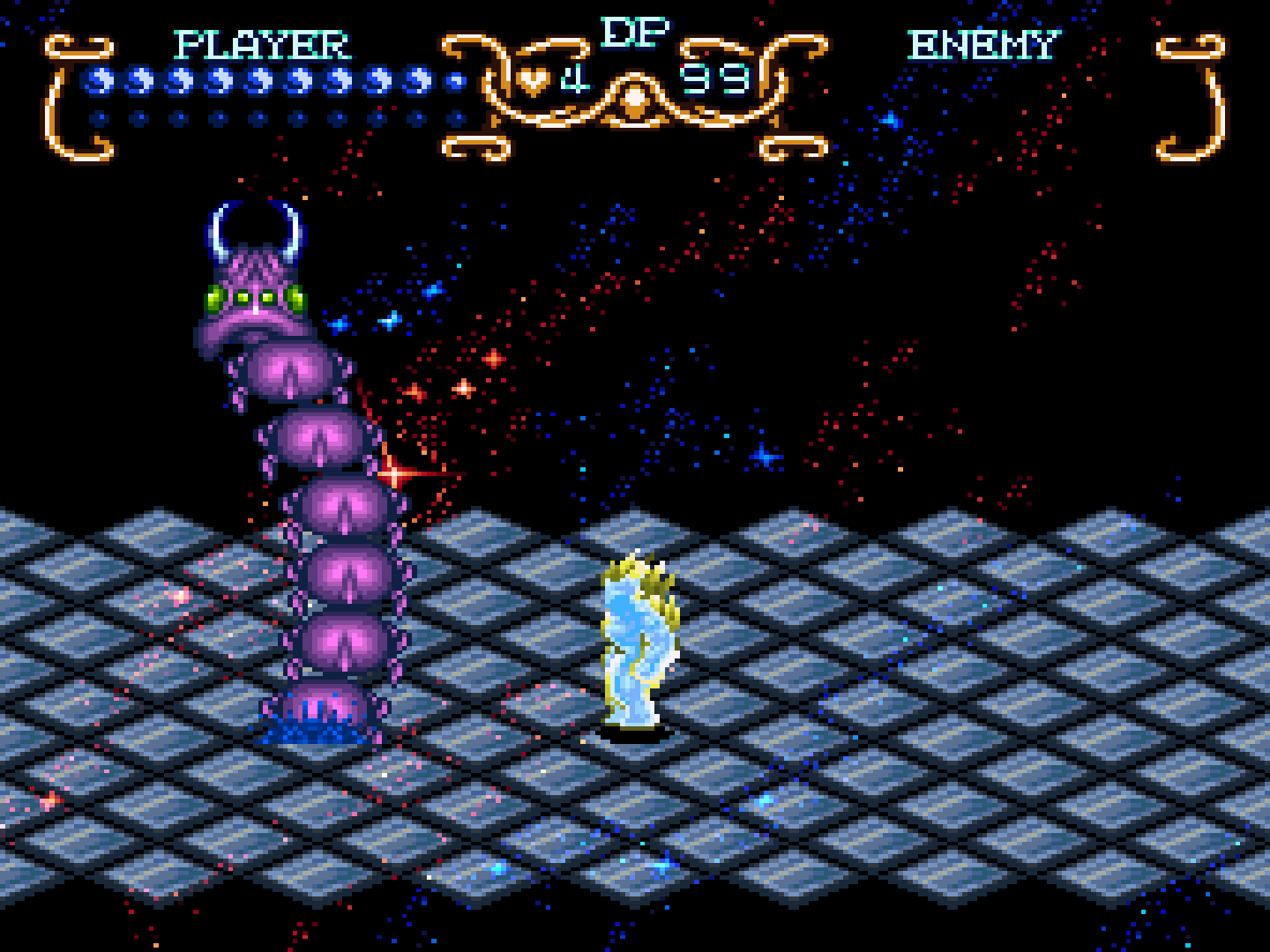 Eventually, the Sand Fanger is down!

But, as we return, someone else is missing! Oh no... 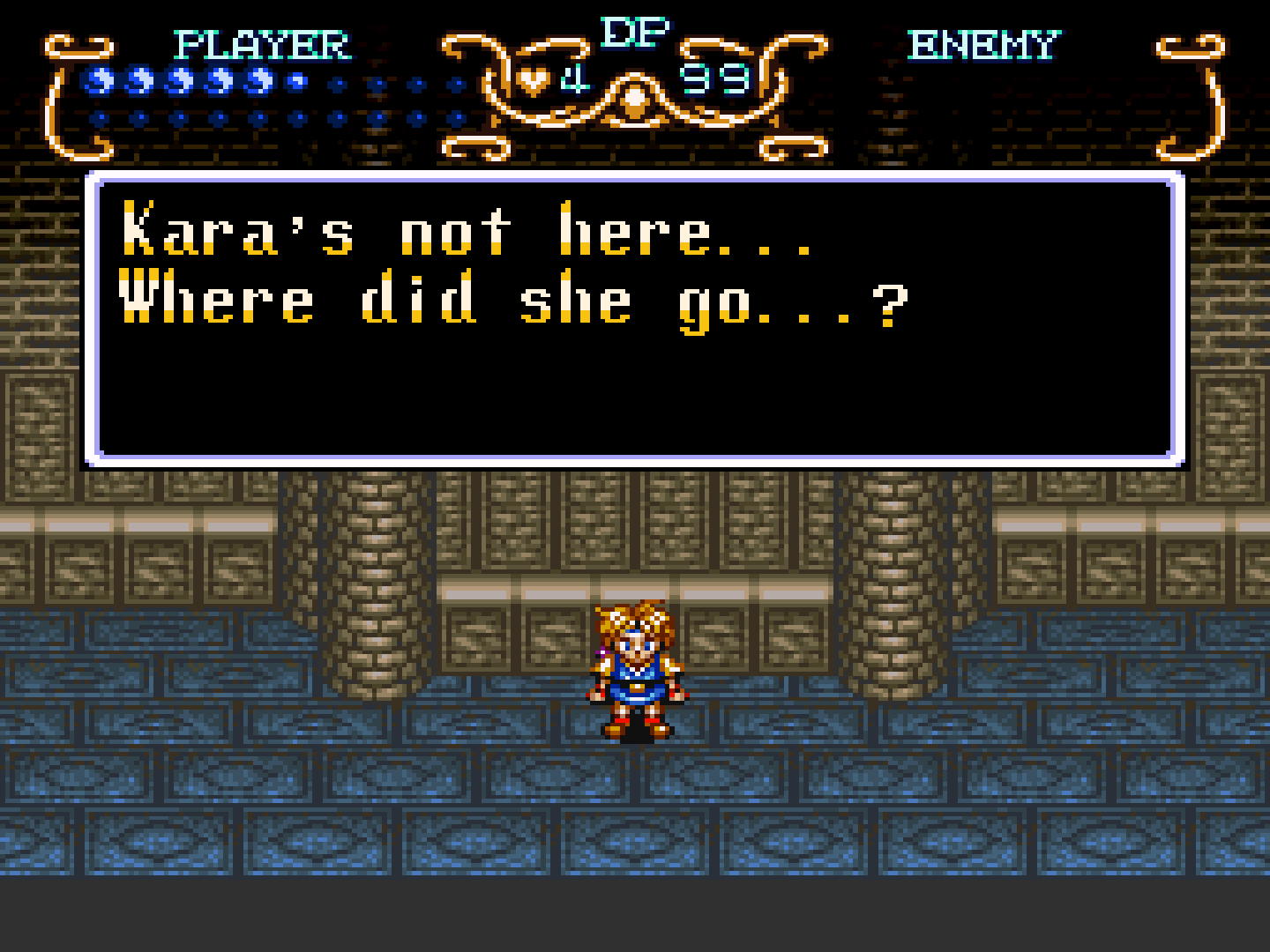 We head outside, where the second boss is on the wall. He offers to take us to the top of the tower. 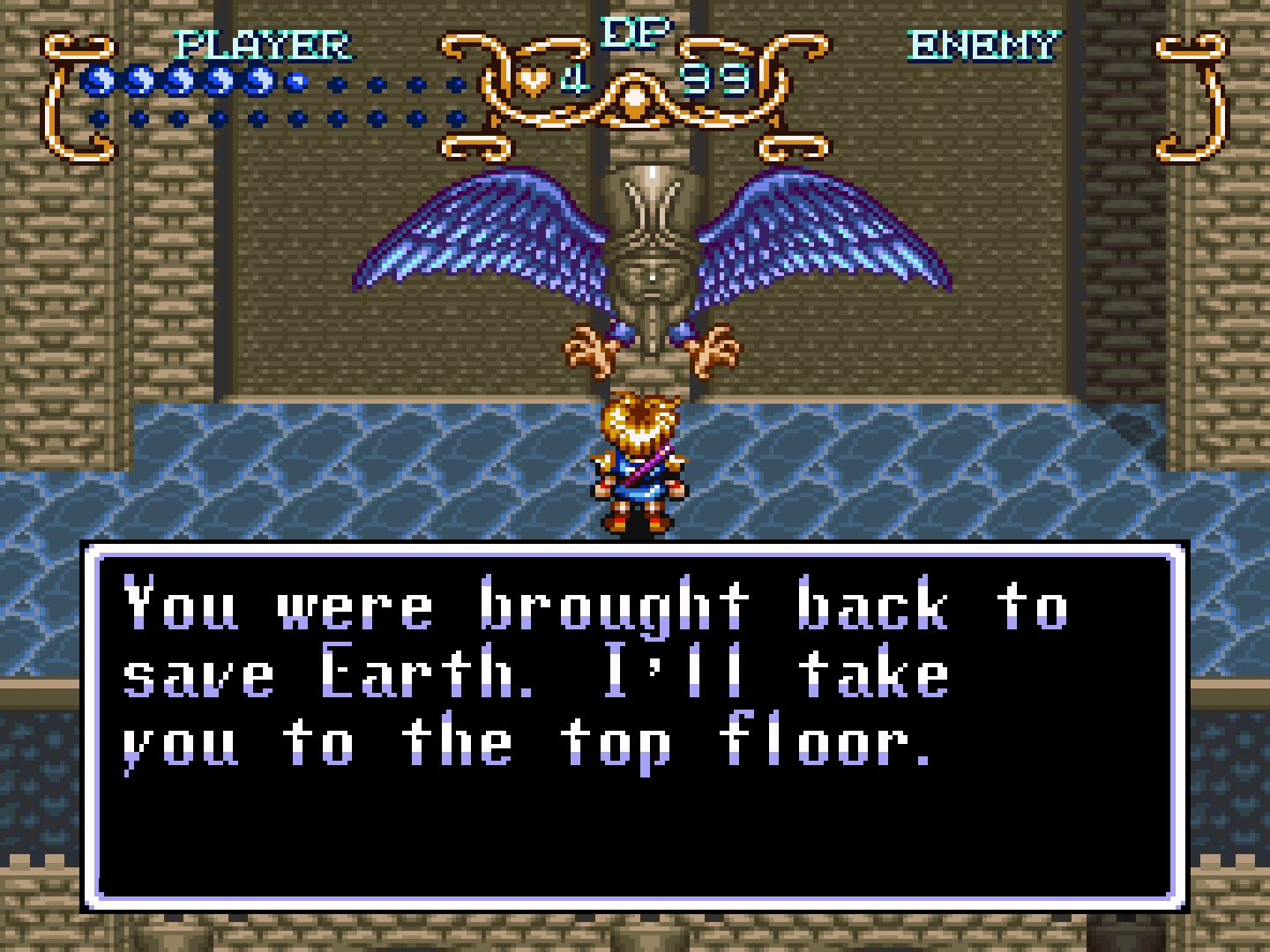 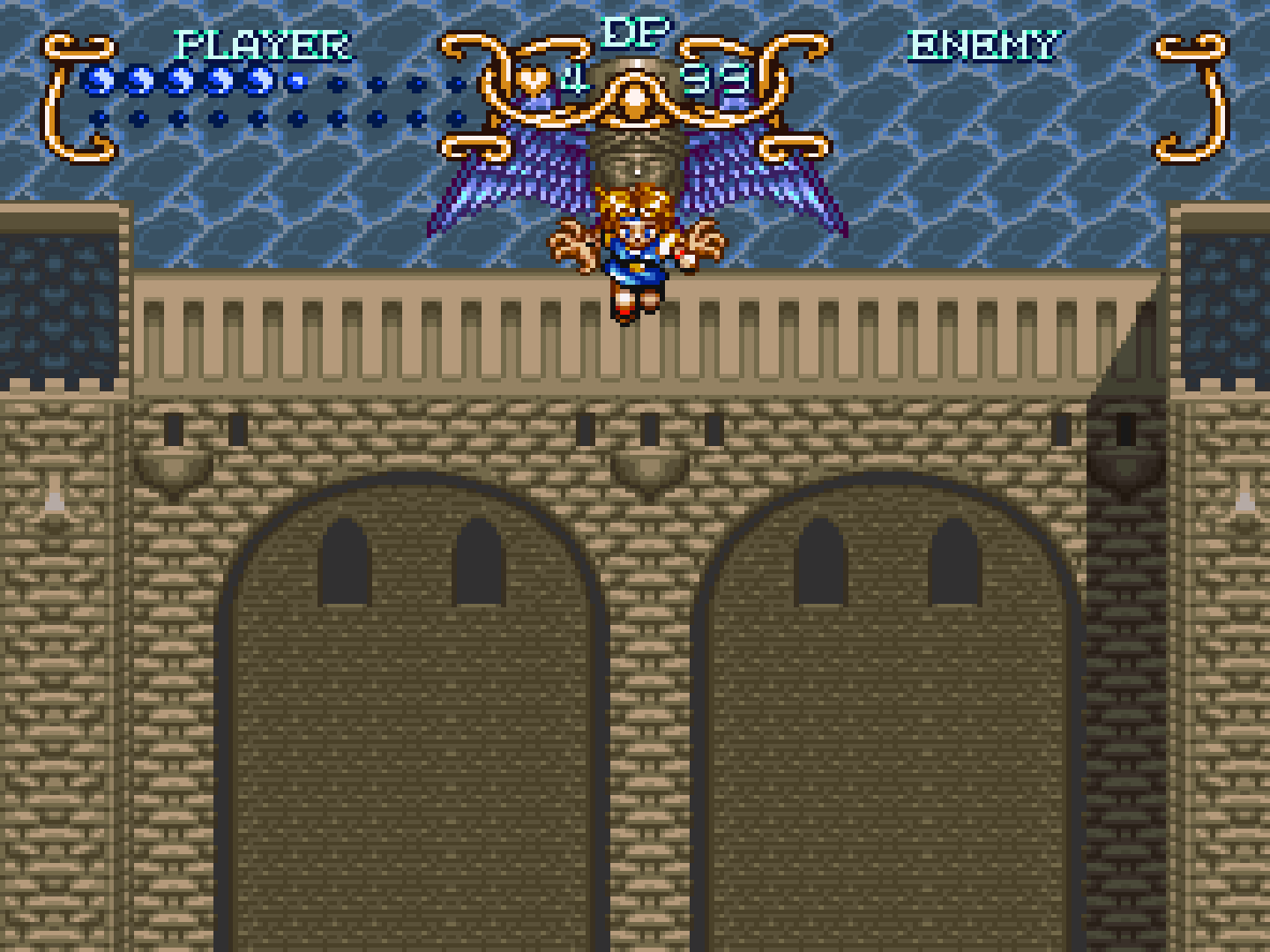 He puts us down gently.

Inside, we've got one more boss to go: the Mummy Queen!

We're treated to a taste of the Queen's magic: pyramid debris!

But, unlike before, the Mummy Queen gets the drop on us! I reset my game back to the Sand Fanger rematch.

Now, back to the Mummy Queen!

After failing countless times, the Mummy Queen's down to her last health point!

And the fireworks appear!

In the next room, the pillars of light emanate again, and the Vampire descends...what is he planning now? 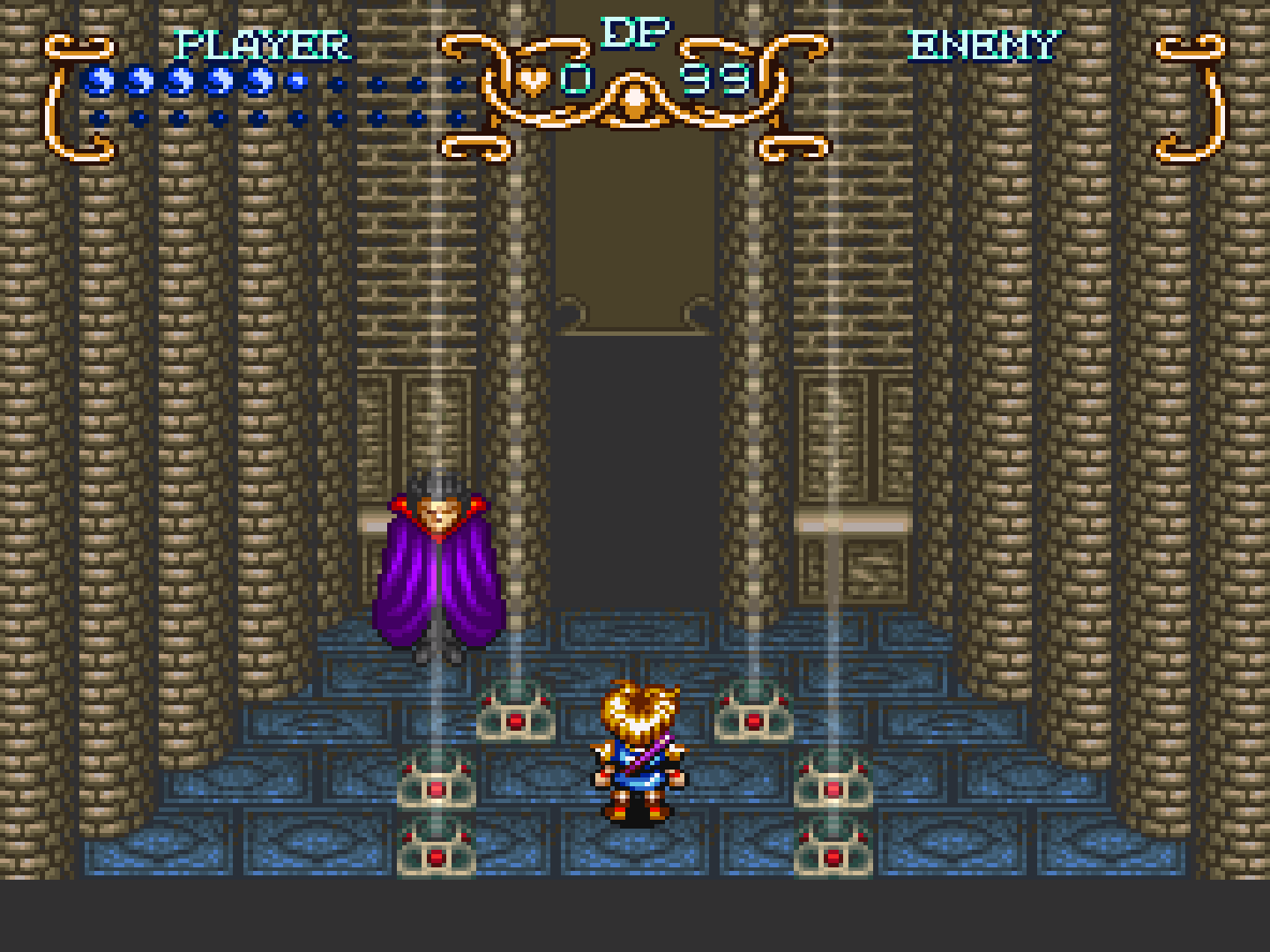 He warns us of the comet once again.

He drags us up the tower once again! 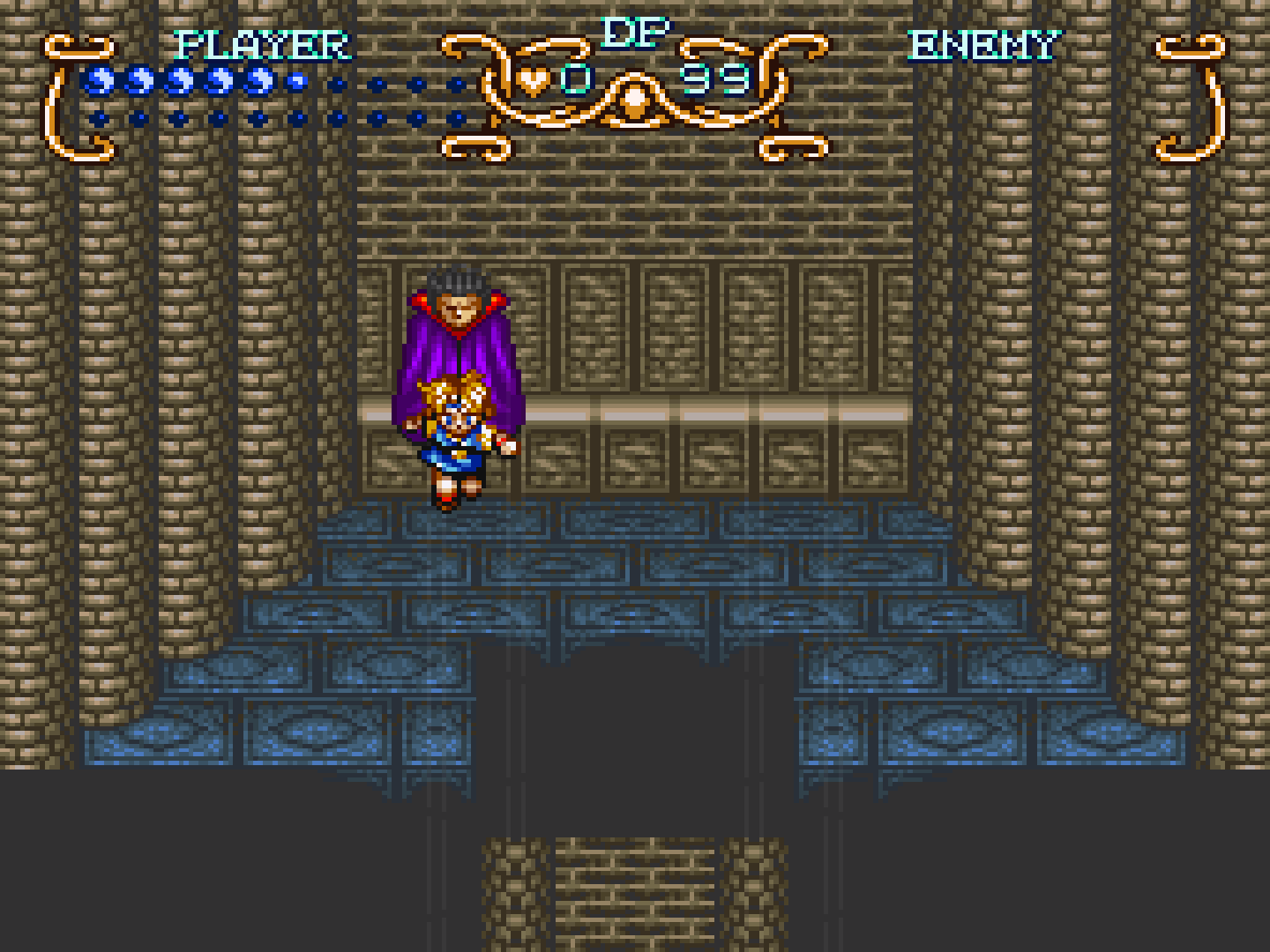 After flying past nearly ten floors (I think?), we finally meet up with Kara! 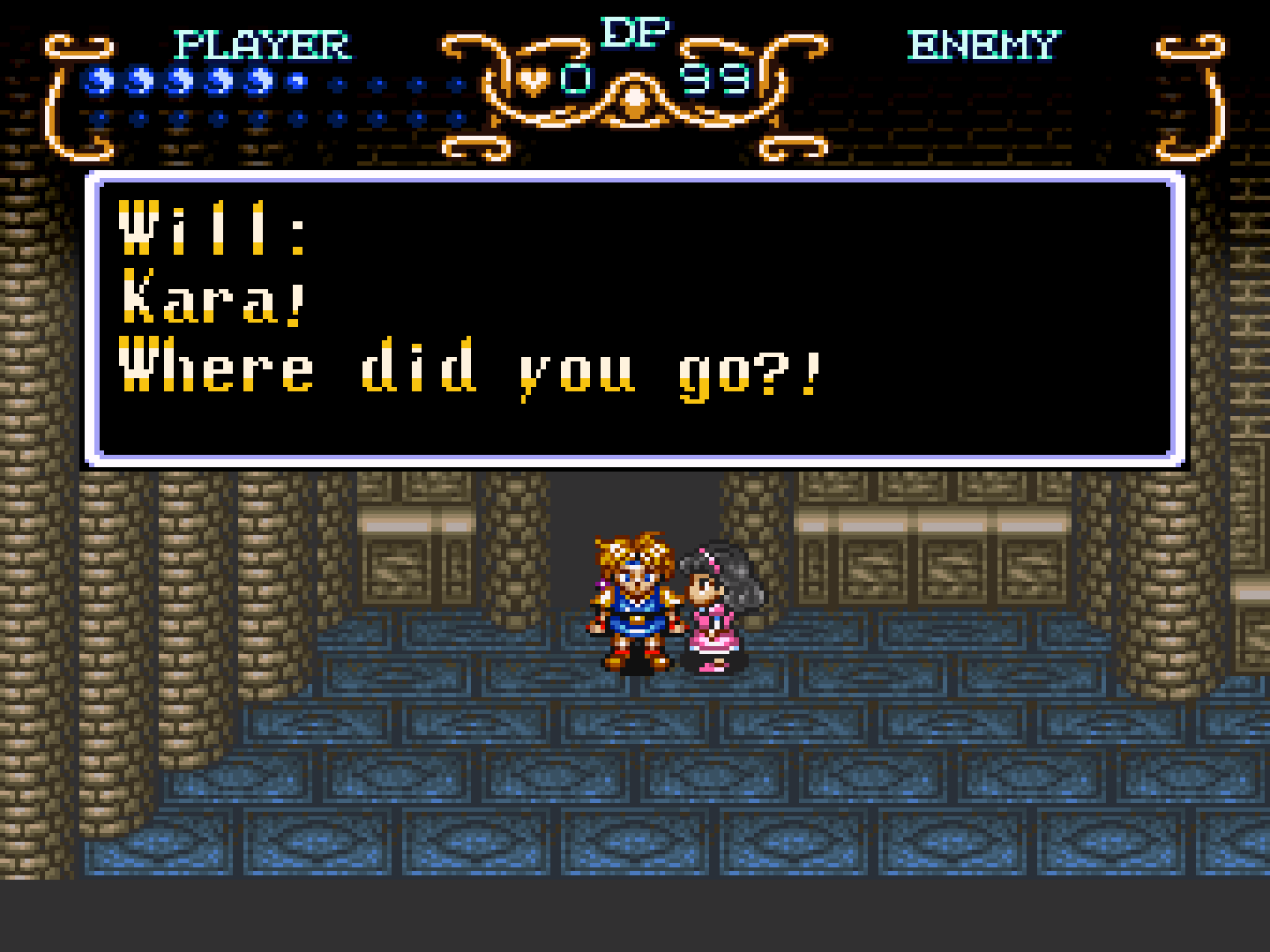 Kara tells us about the Vampire Woman.

Kara: "[The Vampires] say that once the comet is gone, she'll be able to rest in peace."

So Kara got swooped away to the higher floors by the Vampires. 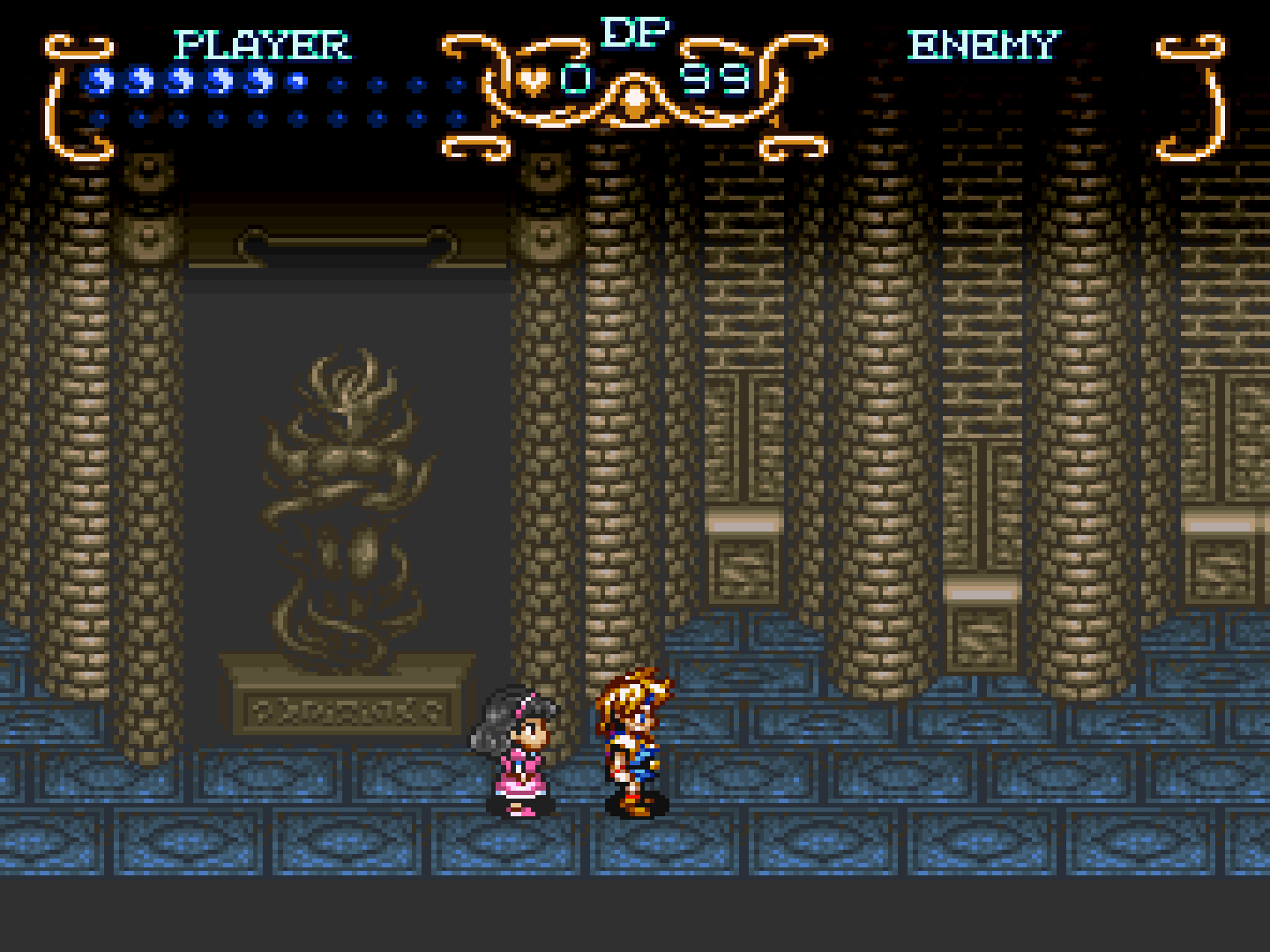 And the last Dark Space portal is in our sights! Yes!!!!

The blue flame warns us we can't turn back once we go in that doorway. They offer to take us back to Dao.

I go inside the Dark Space portal, where Gaia gives us her final piece of advice. 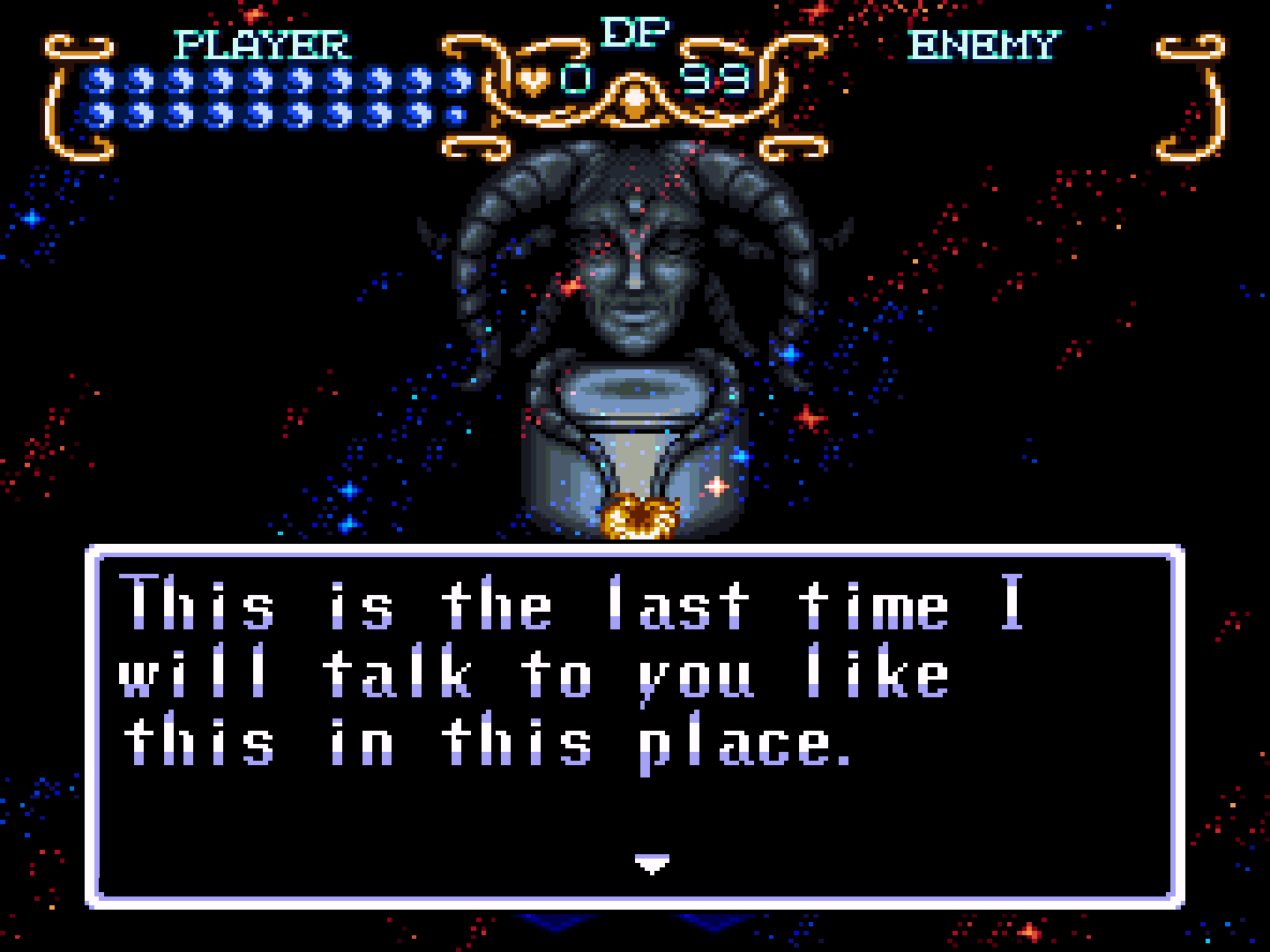 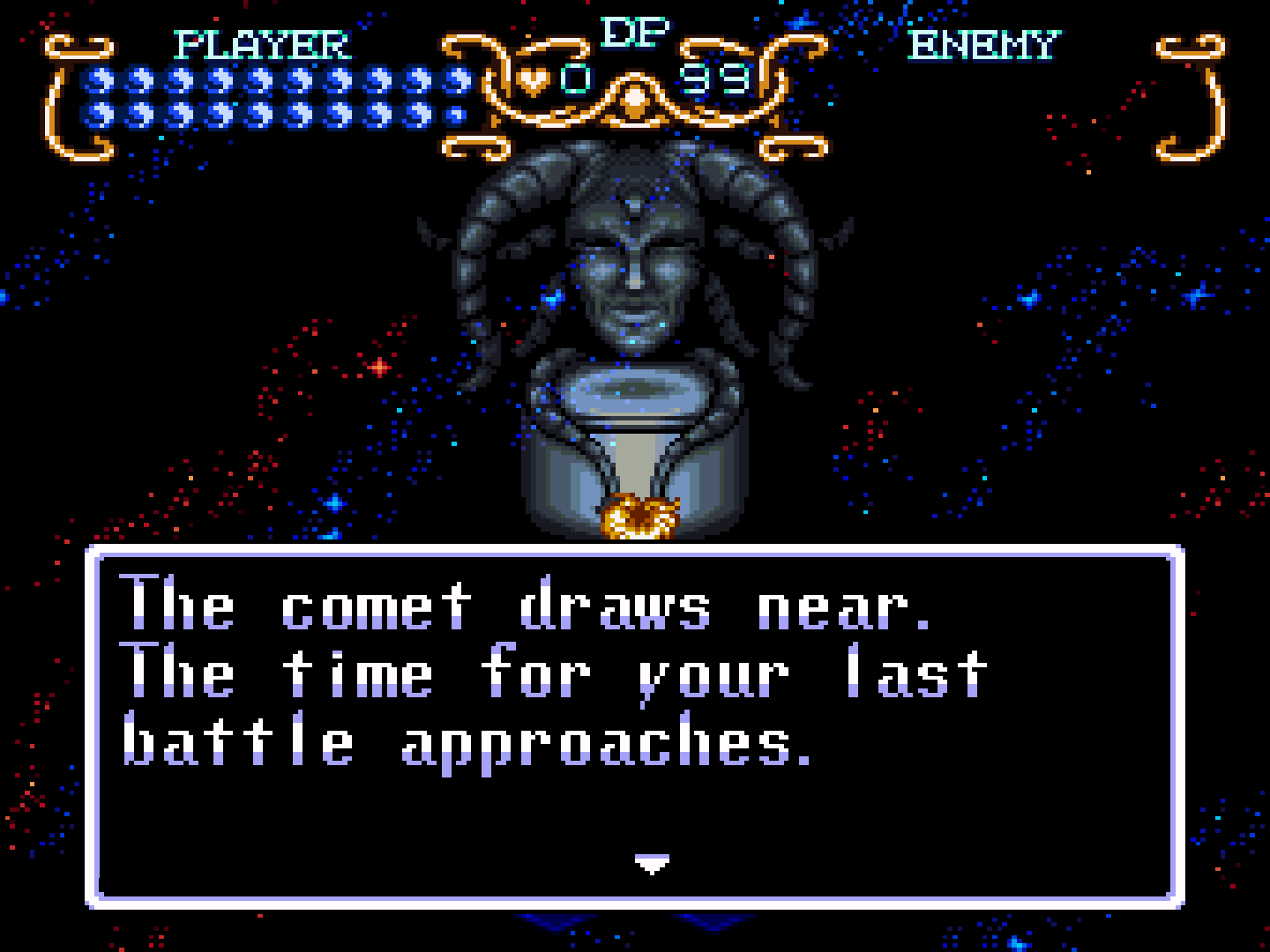 Gaia: "The comet draws near. The time for your last battle approaches. With your rejuvenated power, defeat the comet, Dark Gaia, and become the Dark Knight. Shadow's greatest power, the Firebird, will arise, when you're one with the Light Knight." 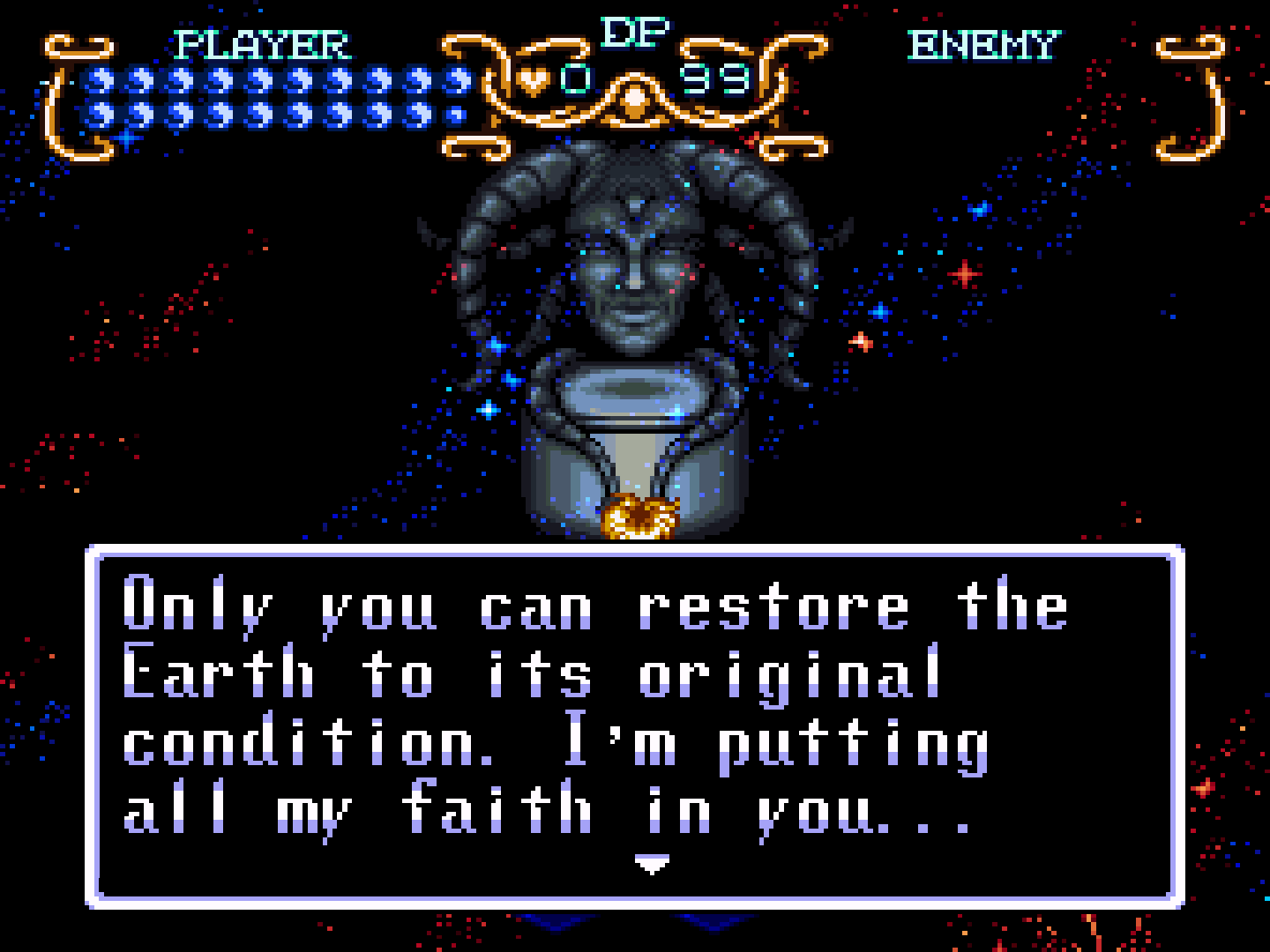 Gaia: "Only you can restore the Earth to its original condition. I'm putting all my faith in you..."

Aside: The reason why I'm repeating most of what Gaia said in-text here is to emphasize how important her words are at this point.

The final battle is definitely coming...