I sink Shadow to the hub, and dash to the fifth chamber, or the second east room!

The number of enemies in this passages are slightly less than the ones in others...

Shadow's now strong enough to take the guards out in two swipes of their arm!

After a small trip downstairs, we come across our first obstacle for tonight's session! 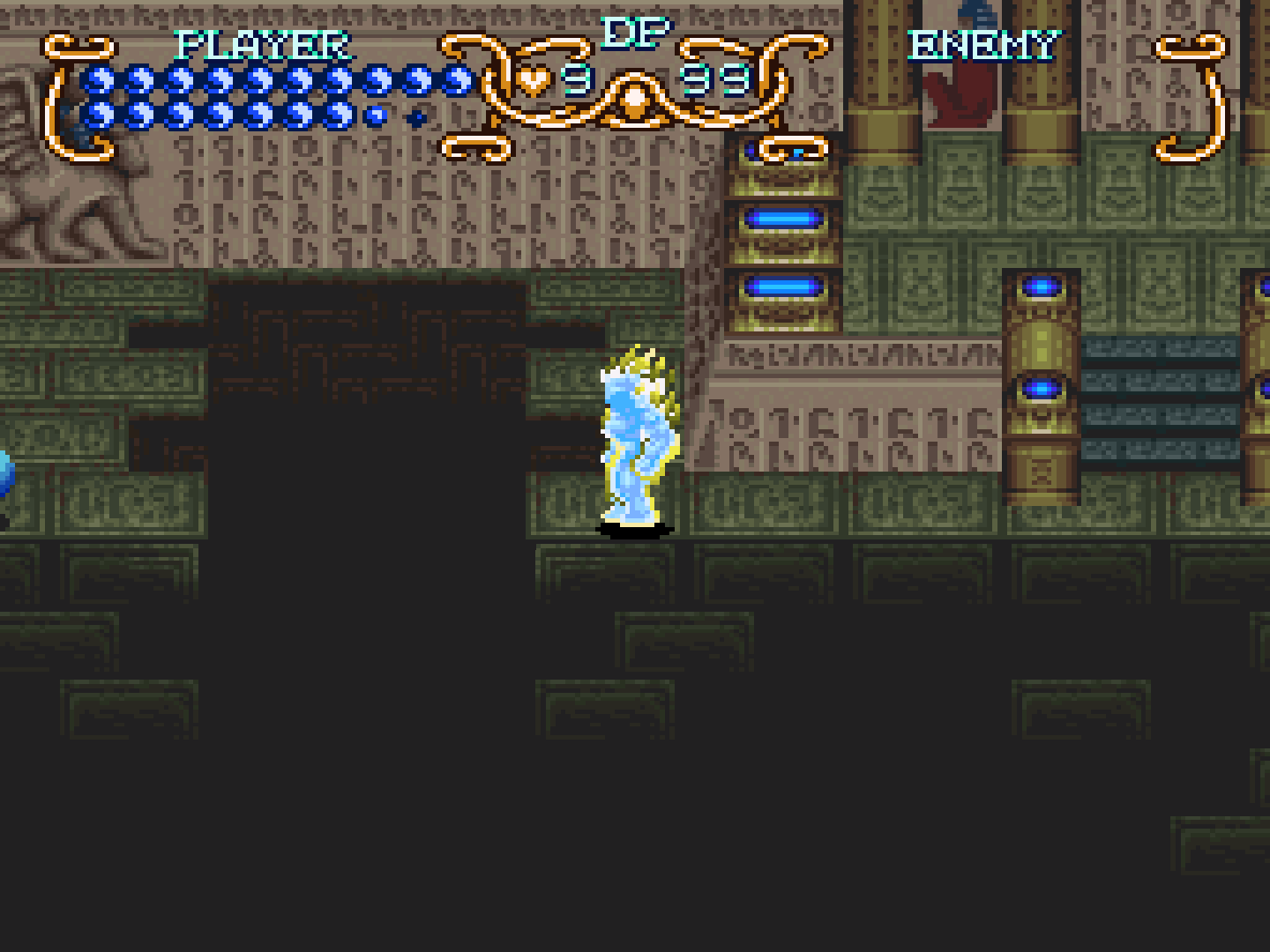 I look around to find any ways to get across the wide chasm, and have Shadow sink into the floor...

We land in between two security measures!

Going up the stairway leads to another stairway going down...say that five times fast!

I take to the west stairway, which is two sets of stairs.

After more security orb eliminations, we manage to make it to the other side of the chasm! 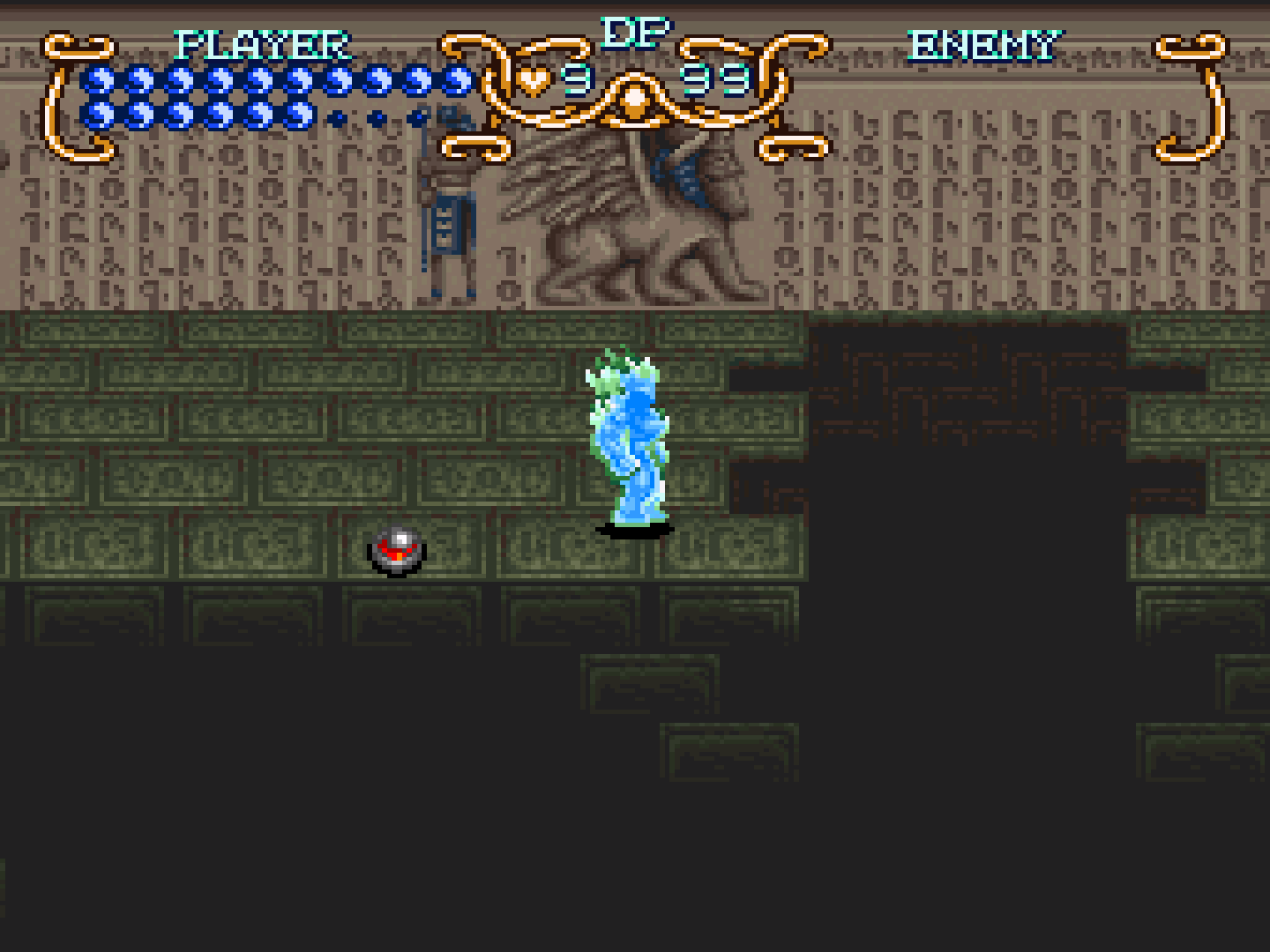 I go back up to the top, and sink into the floor. Before I have Shadow sink in, I notice another invisible fireball-throwing force!

At the bottom, I see another chest with a Red Jewel inside!

Since there's no way to return directly back up, I use the nearby portal to take us to the entrance.

The bricks below the floor are a good indicator of when to sink underground or not.

I have Shadow go to the west end of the passage, leading to the other side of the second gap.

Our prize for clearing the area is another health boost! Finally!

There's more to this room!?

This time, our starting enemies are mummies!

Pressing L or R, Shadow doesn't twirl a flute, or shine a sword, but their flames flash and shake brilliantly fast! It nearly gave me eye strain, so I avoid doing this...

Downstairs, a quartet of mummies in single file await.

Heading further downstairs and into a tunnel...

This hallway is super long!

At the end, more guards try to stop our progress, but they're easily gone because we have Shadow...

Now we see the fifth hieroglyph before us! 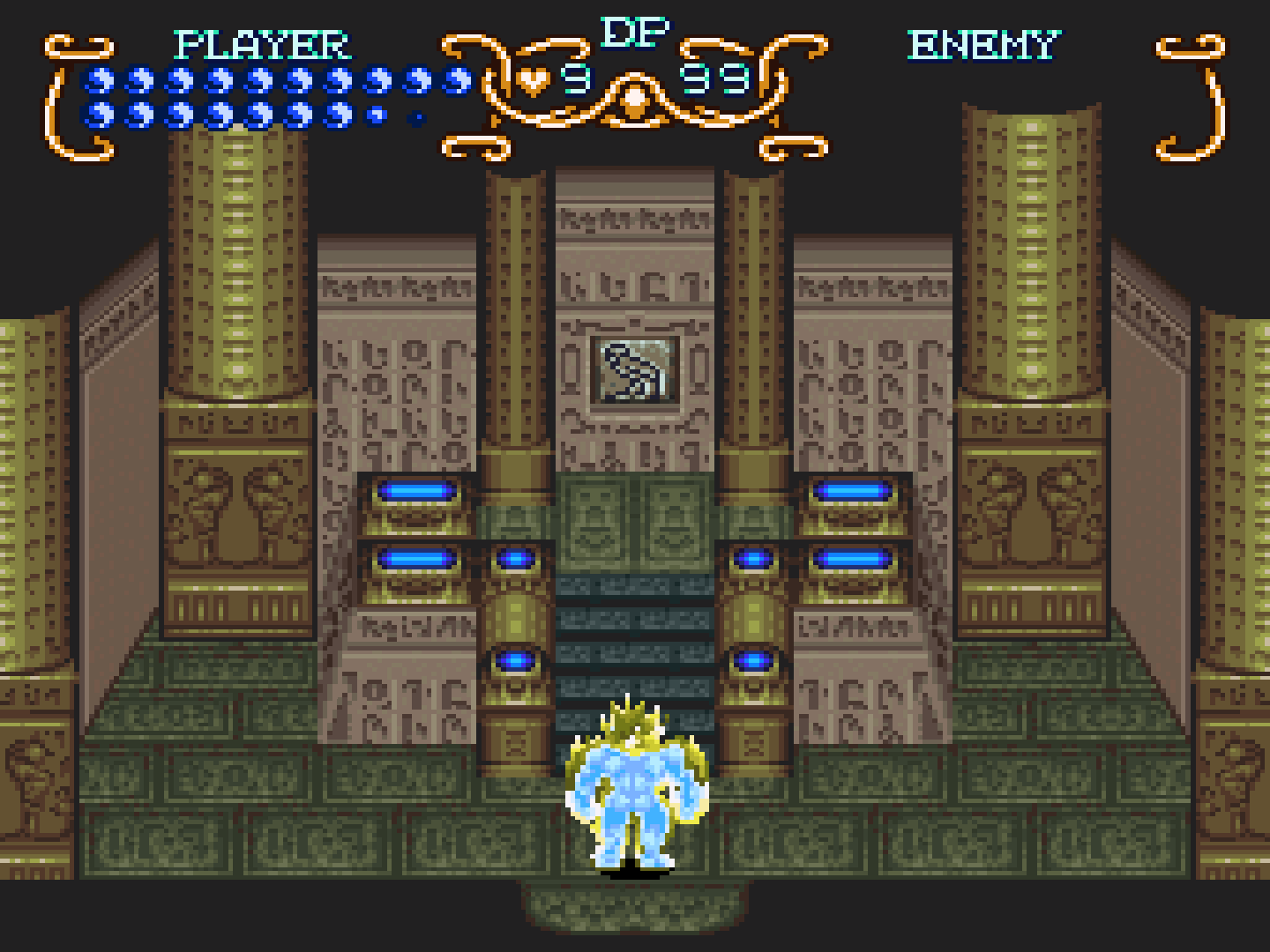 We take the tablet immediately and go back to clear the area of enemies!

Another boost to our strength is ours!

We put the tablet into its place and save before taking on the last passage.

This is a long dungeon!

In the final room, we meet more mummies and security orbs!

With Shadow, everything feels pretty easy!

I didn't notice that the recess in the middle where the mummy was had a staircase... 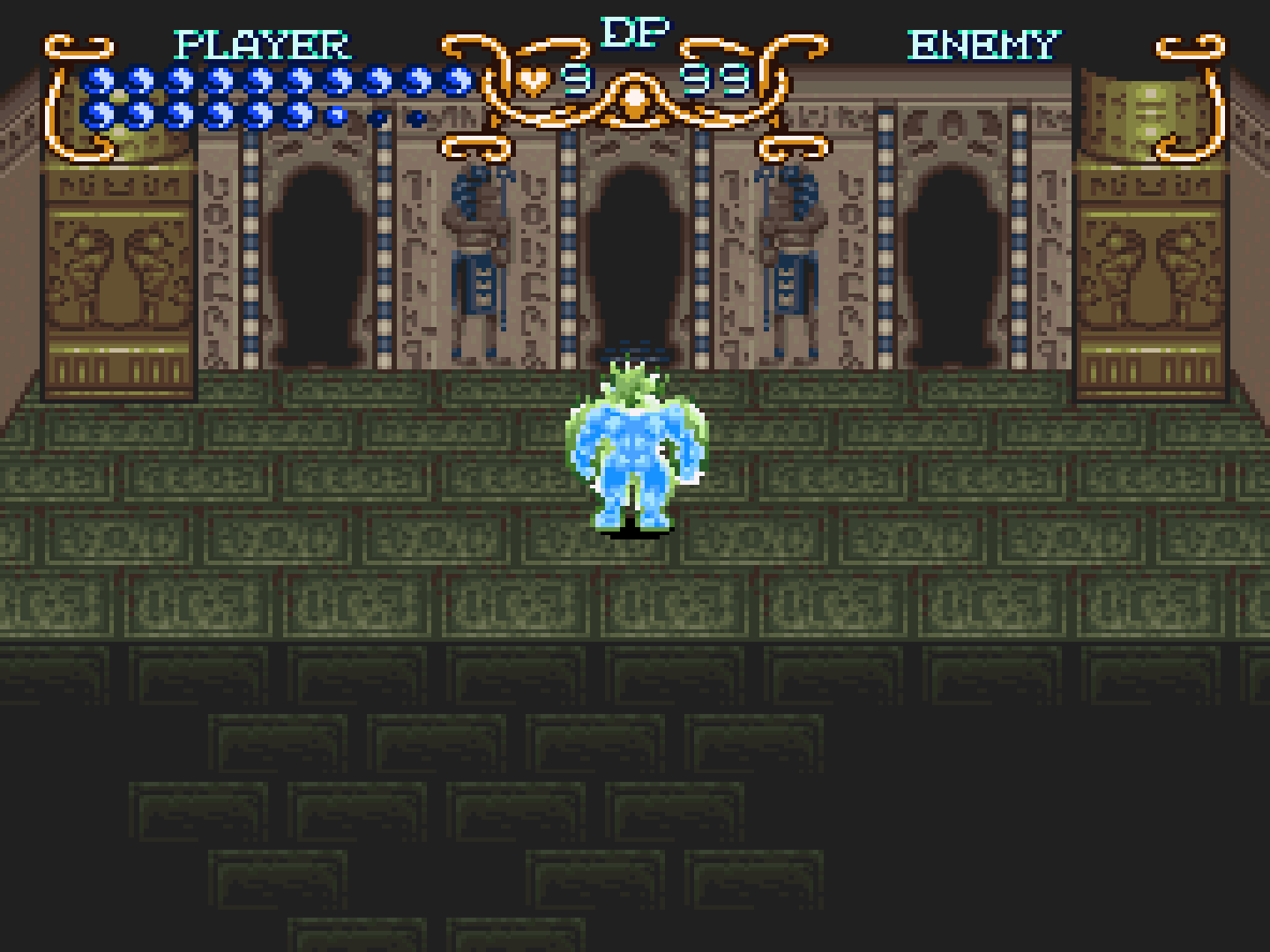 I have Shadow go back down and sink into the floor once again.

Back up from another tunnel and up to a mummy crypt...

Downstairs, we take care of the last of the enemies in this chamber and win another health boost! We now have 39 so far! One more to go!

Inside the second room of this passage, we now have to face 17 more enemies!

Bring it on, mummies! 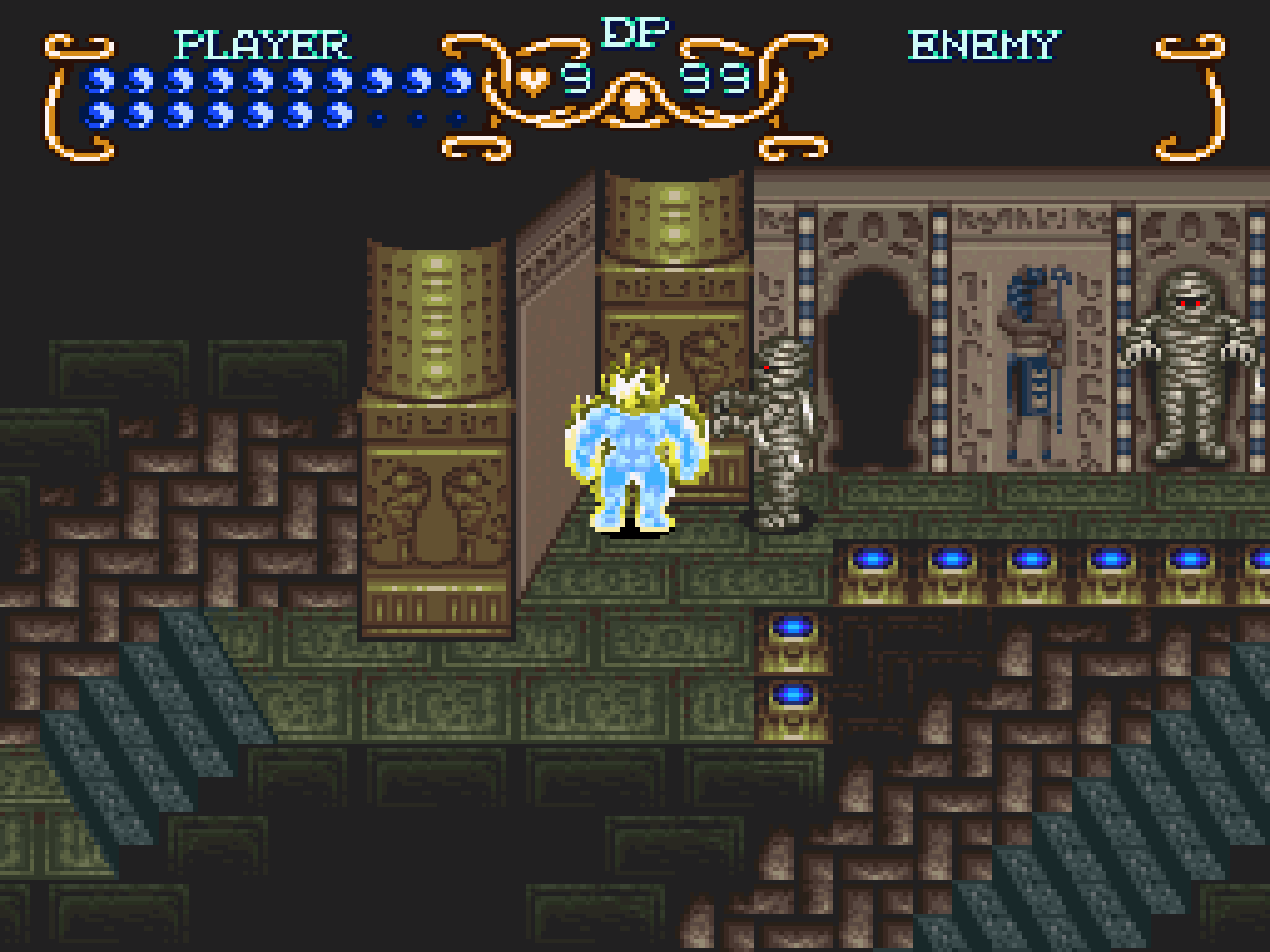 After one last defense boost, and a small doubling back trying to find the hieroglyph room, we make it! 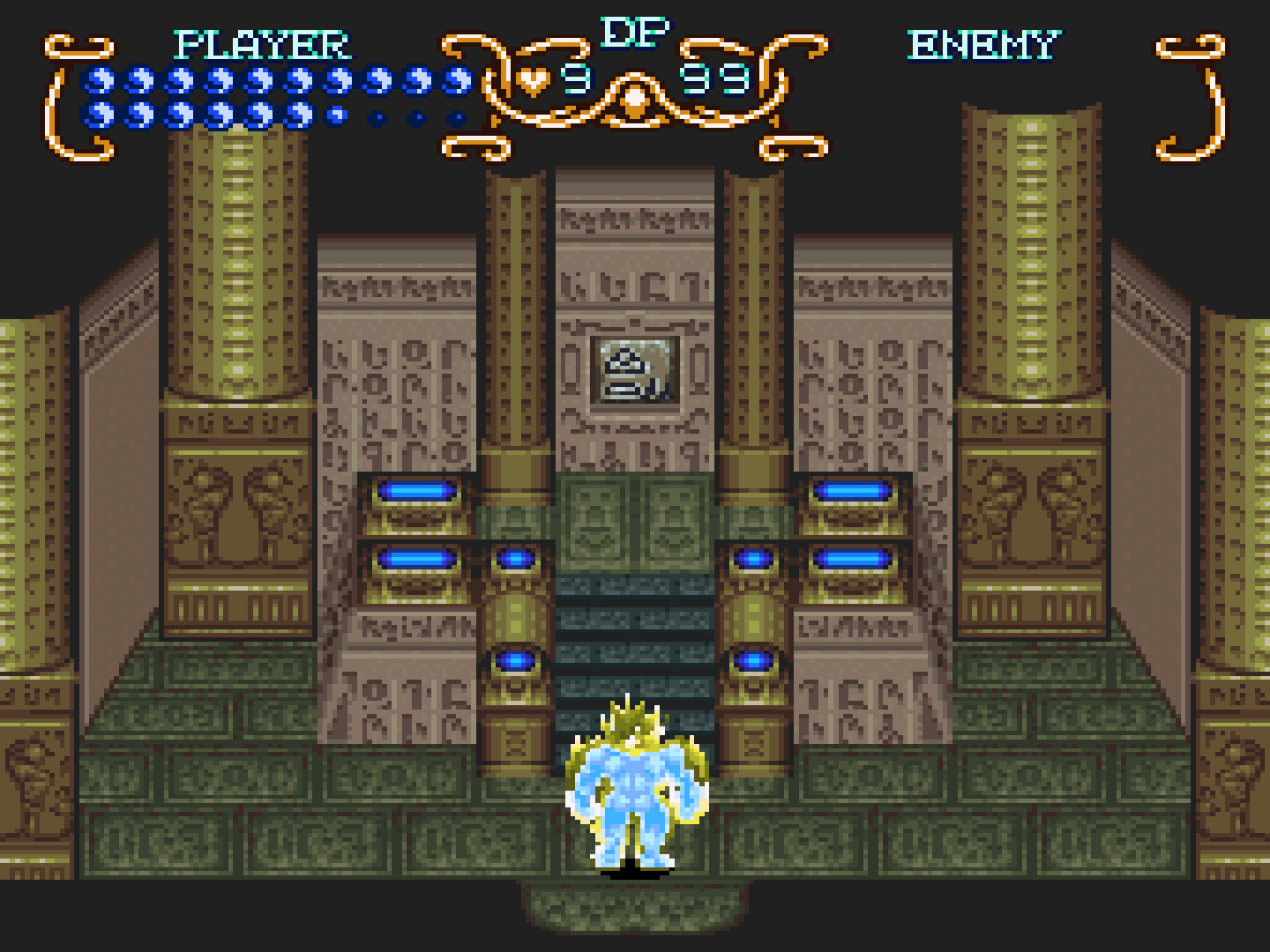 I save before putting in the tablet at the hieroglyph room.