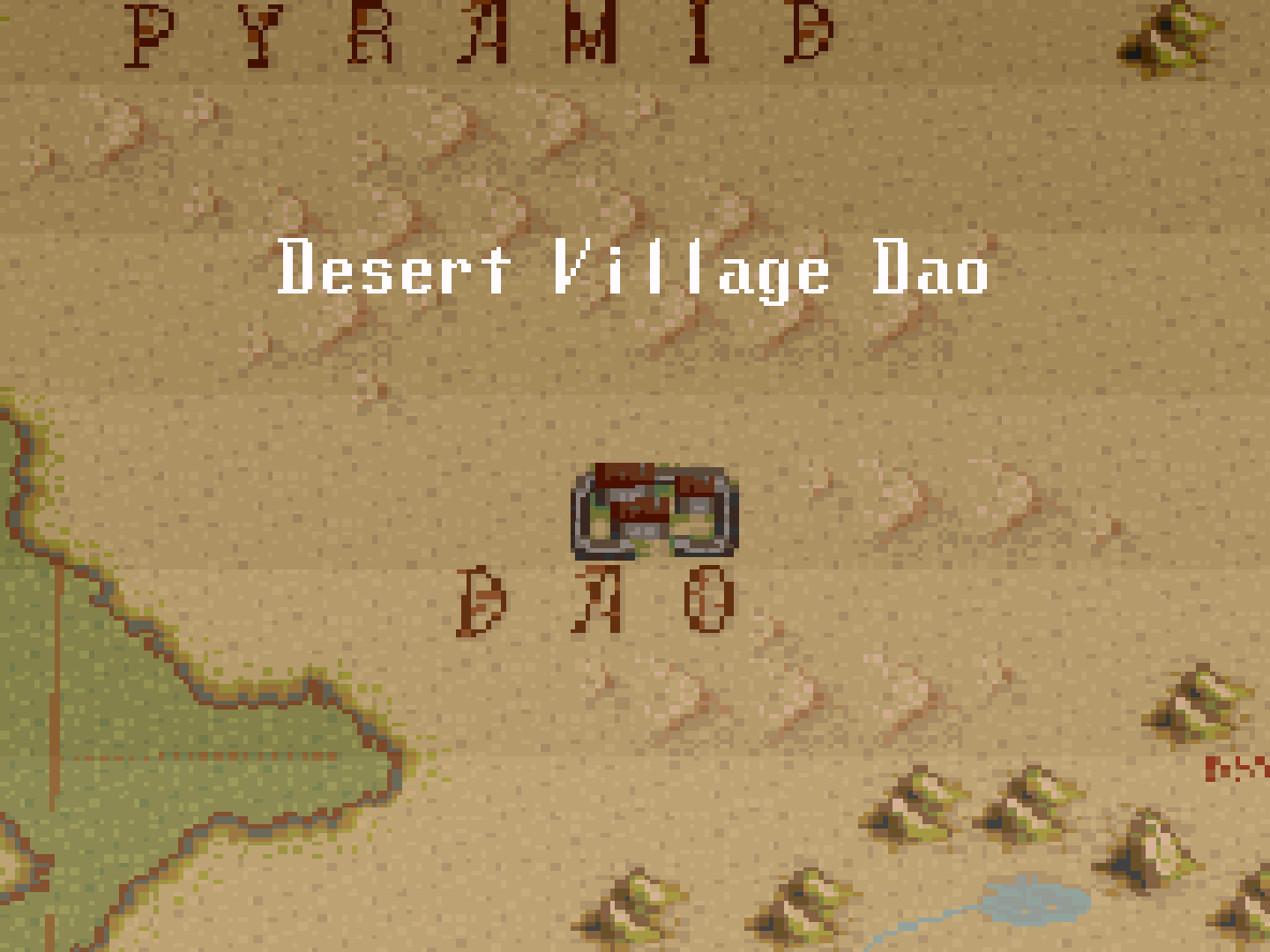 We follow the trade route northwest to the desert village Dao, which Will labels as such.

We're now inside a house, or an inn. 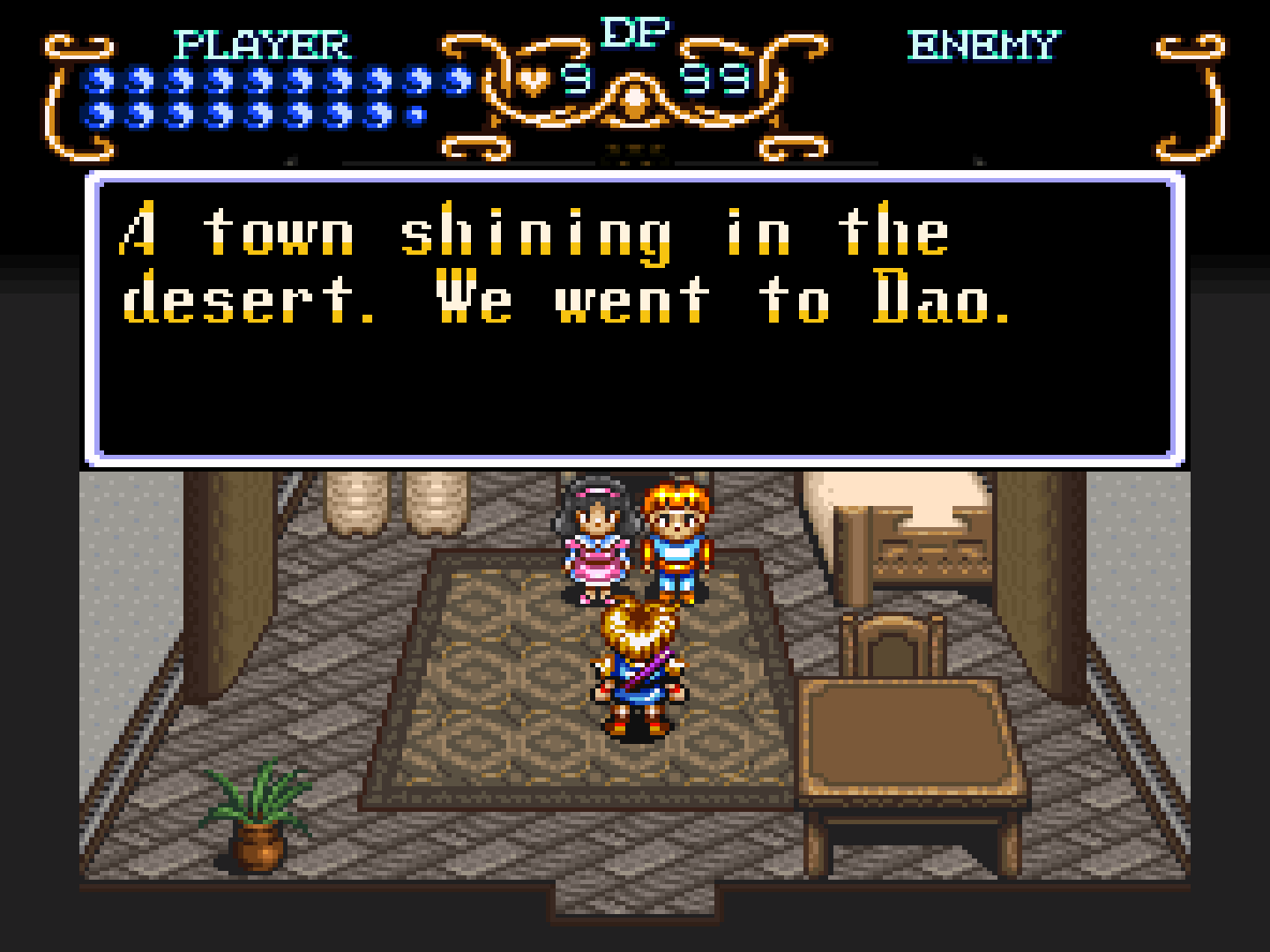 Kara says that the village doesn't look like a place famous for labor trading...

Erik's not leaving the house because of the sandstorm.

Taking a look outside, it's pretty windy...

A snake charmer outside the house asks Will if he's Will. I say no first since I have to check out the village.

The Dark Space gate is west of the snake charmer in an alleyway. That's very convenient.

One of the villagers mentions that "children (Will, Kara, and Erik) don't come to places like [Dao] very often."

One of the native villagers is in a cell, following Will, while the man with the cane is tapping his foot. I'm thinking the man's not a happy person. 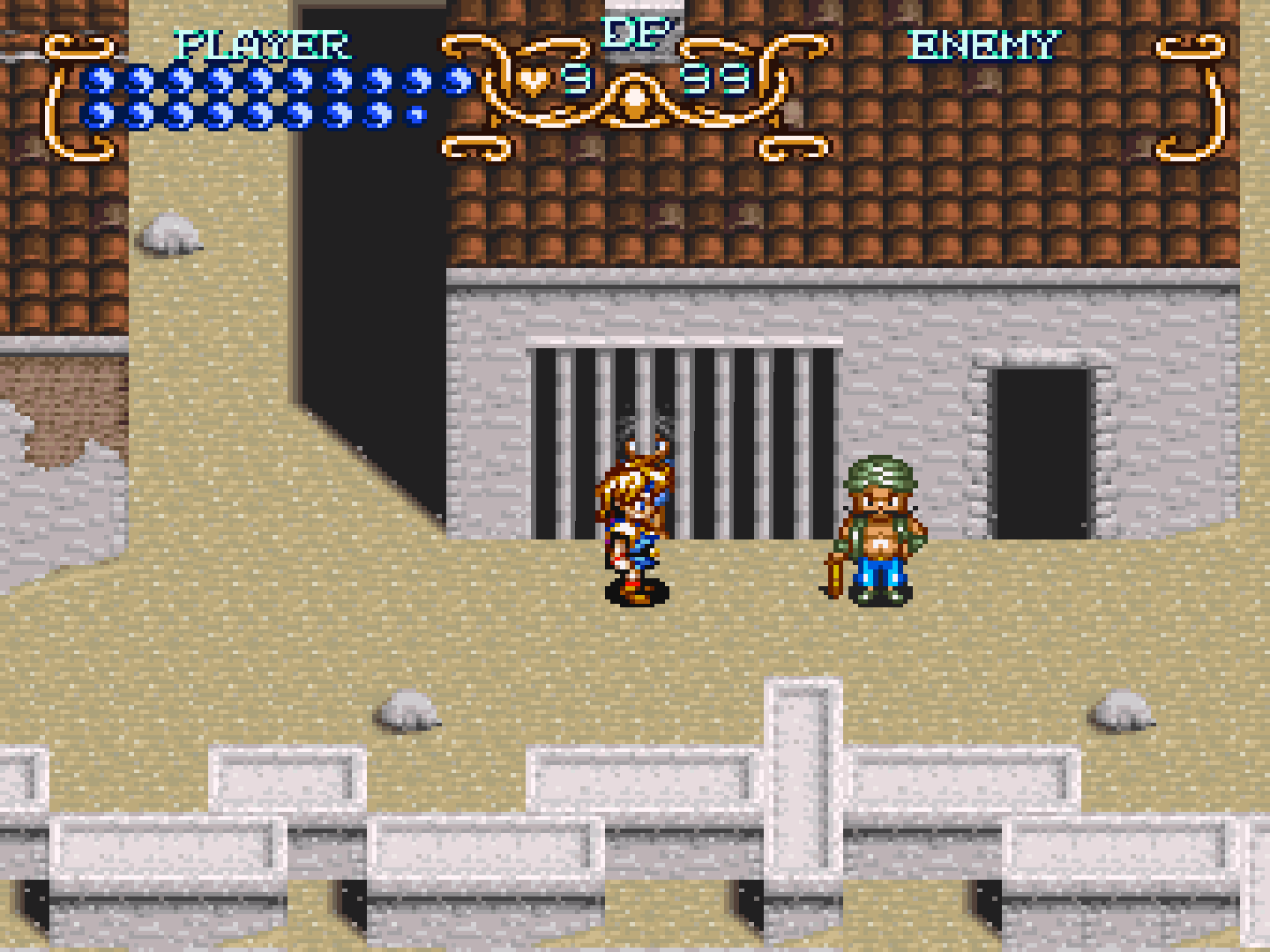 The man with the cane tells us to shoo.

Will tries to talk to the boy, but the language barrier between the boy and Will is high.

Inside the house, a man there refuses to take Will's money to free the villager, citing something decent and turning it on its head. 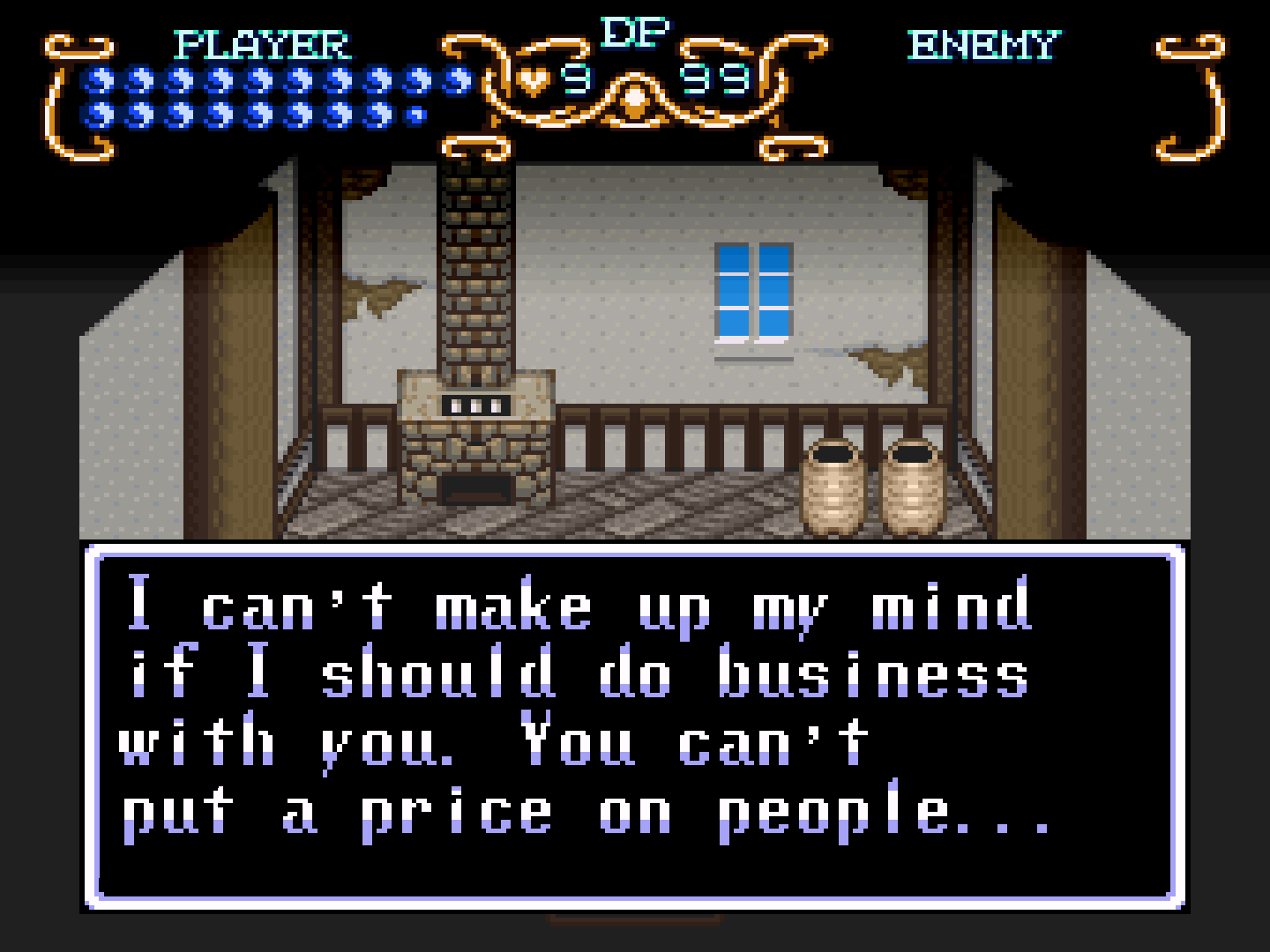 We meet the Jeweler Gem again, and check how much Red Jewels we have so far: 29.

Inside the house next to ours, we meet an old friend... 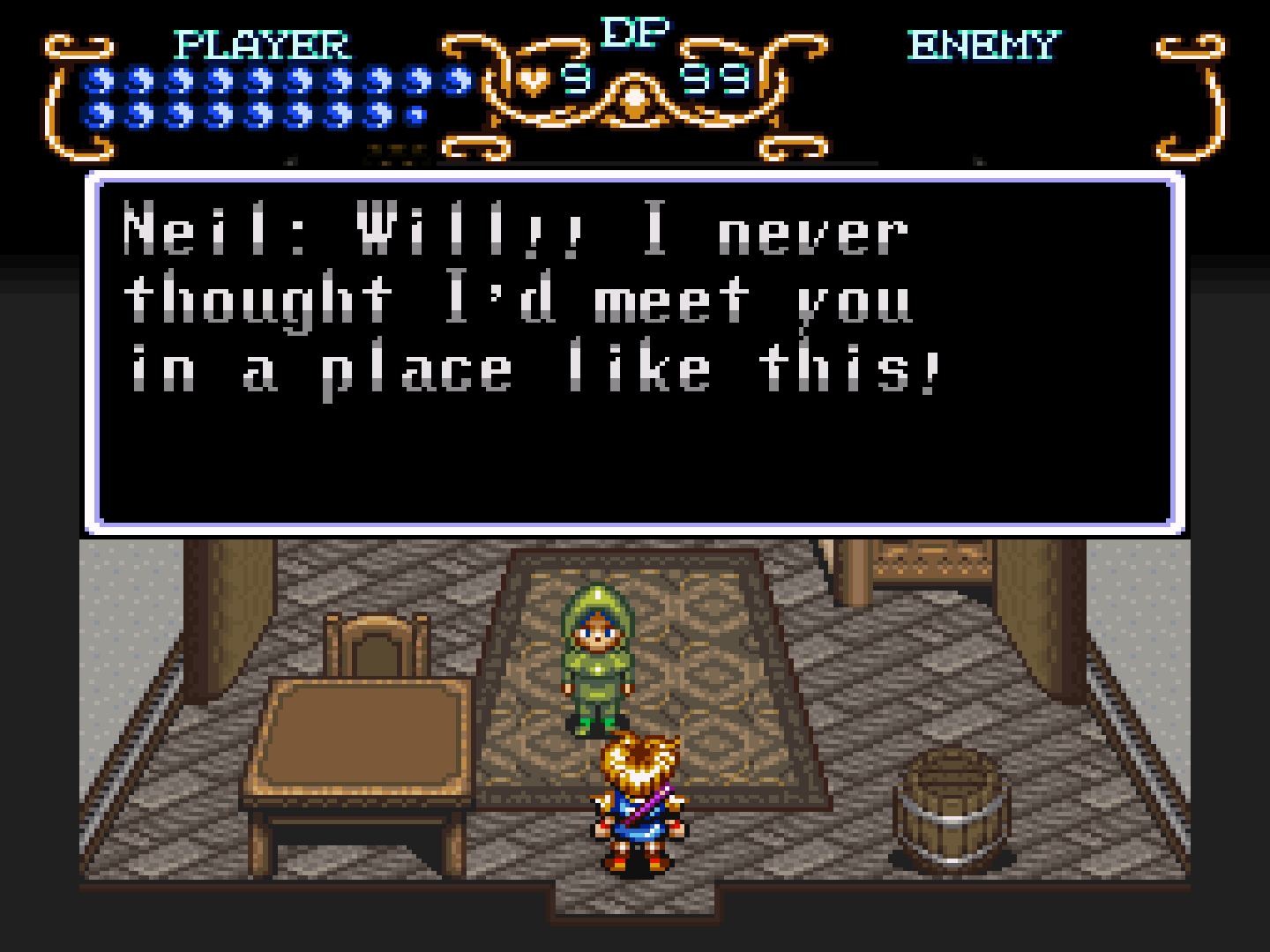 Will asks if he's doing his duties as Rolek's president. He is. Neil's trying to stop the labor trade with pepper spices.

Neil gives us more advice on where to find the next Mystic Statue. 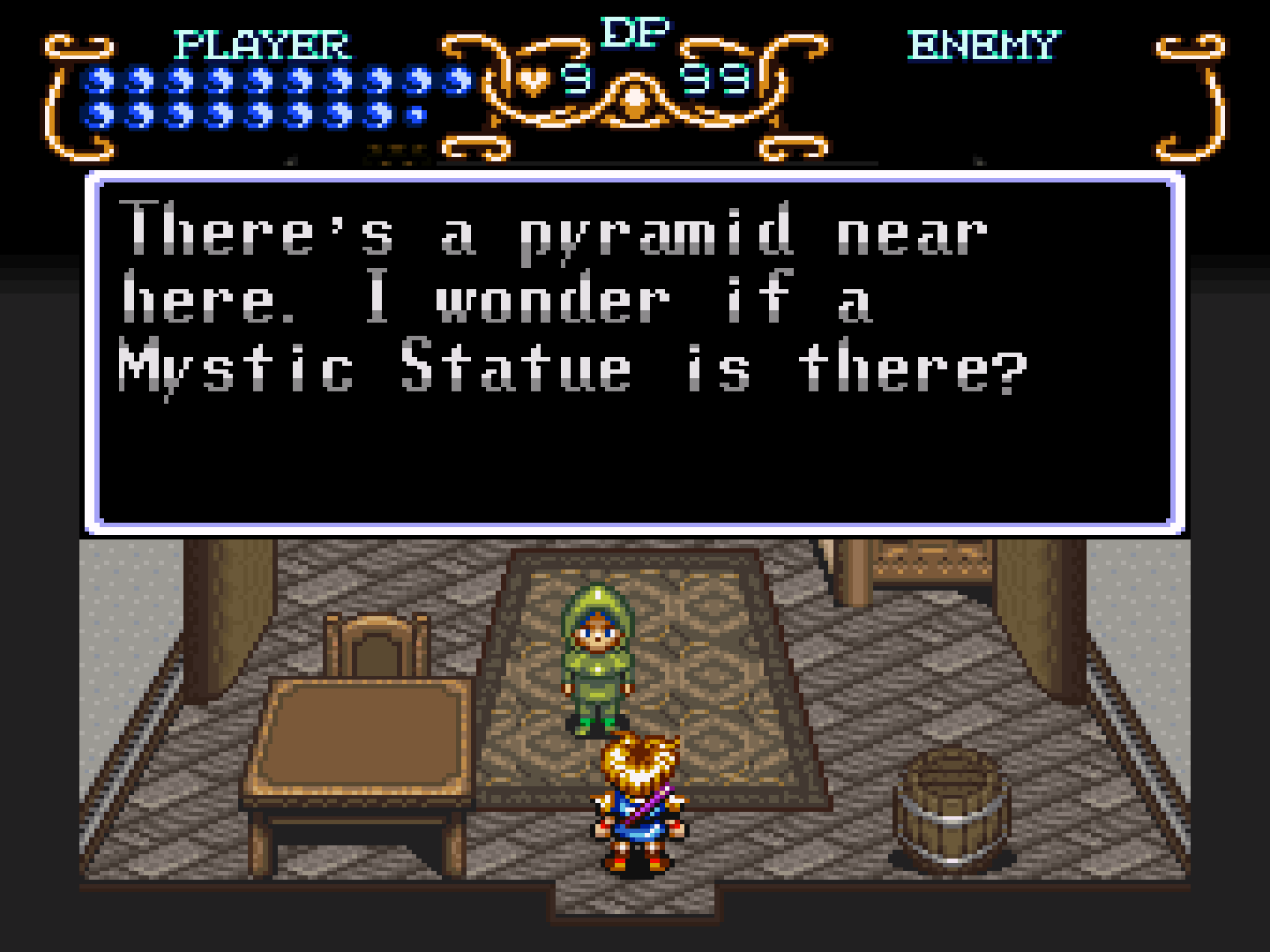 Nice to see you again, Neil.

Outside, I notice a blue haired woman behind the white wall in the corner. 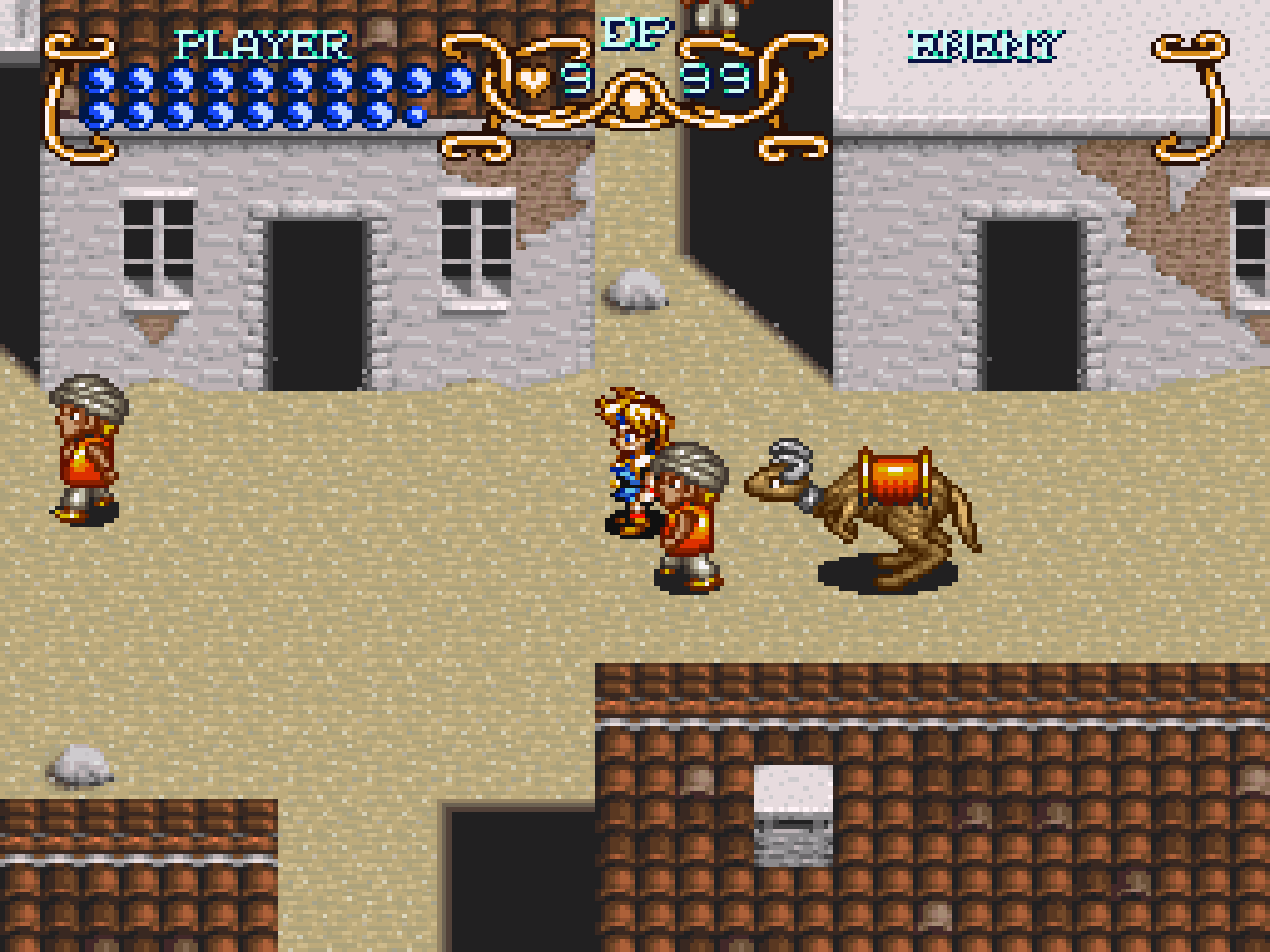 The Kruk's hopping alongside a carpet merchant!

Talking to a merchant near the fountain, we get a brief history of where Edward Castle got its carpets. 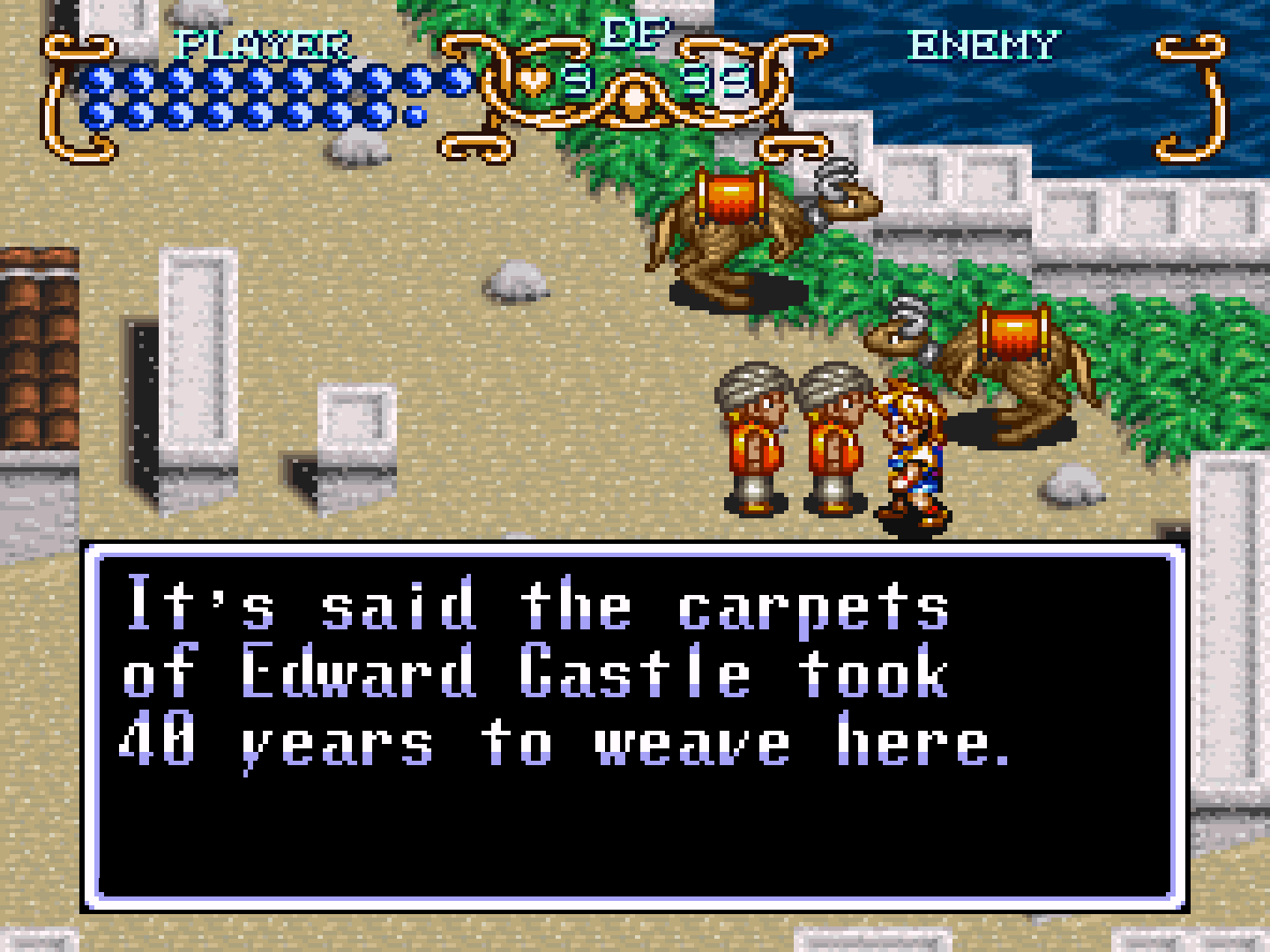 Another merchant tells us about a "freedom movement" started up by Neil.

I go to the blue haired girl, who gives us a "sheet of paper," or a photo of someone... 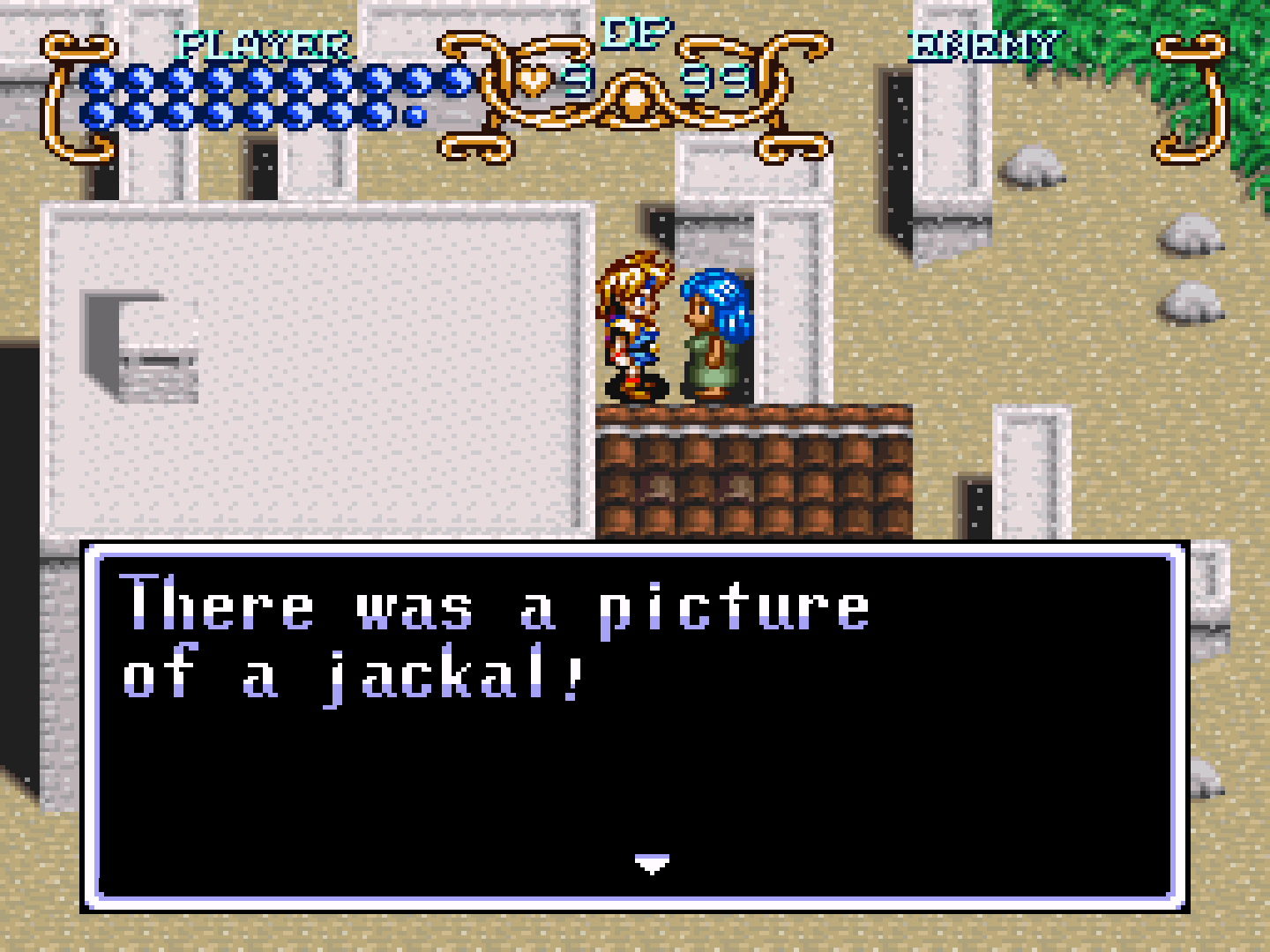 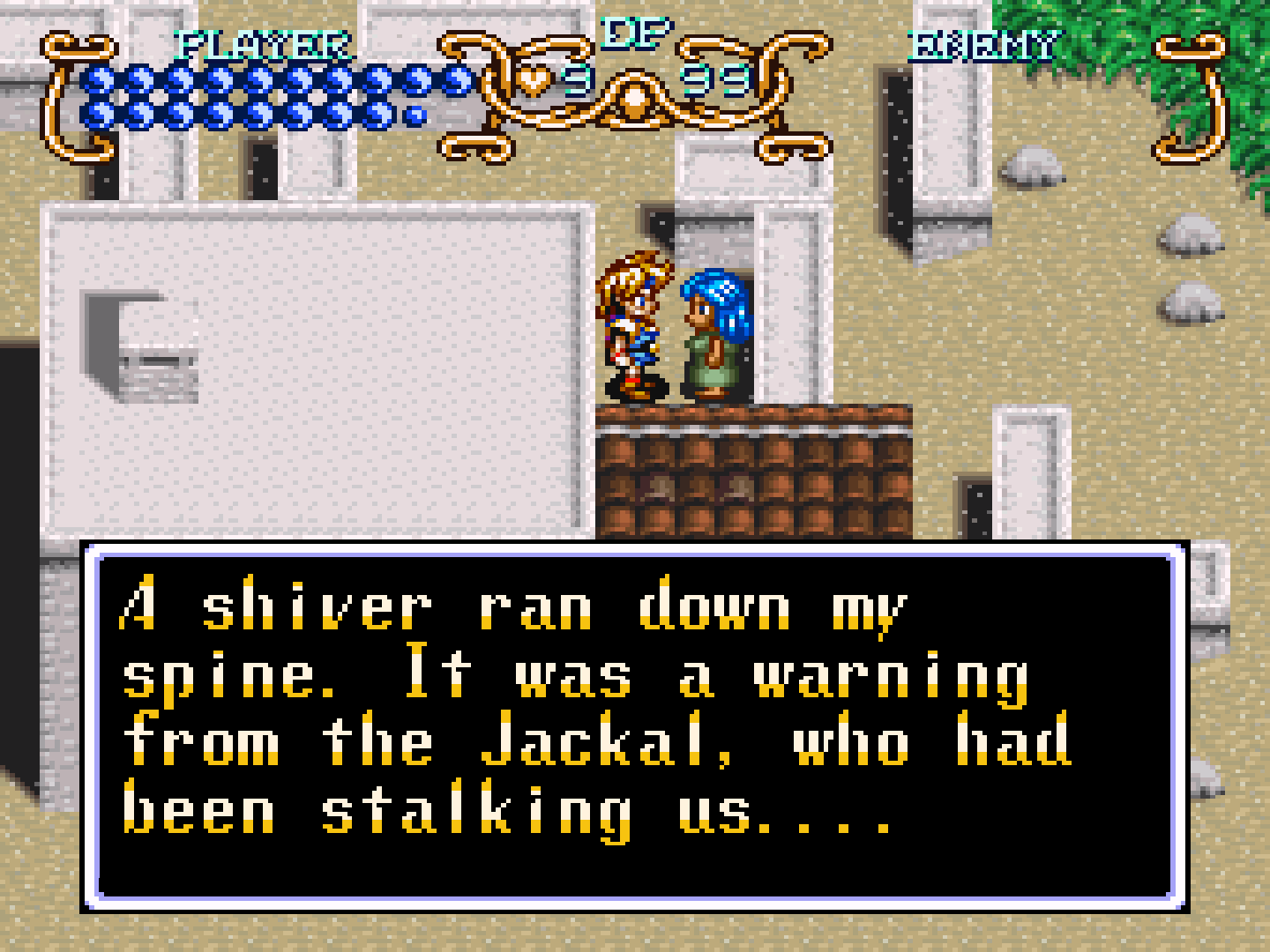 The dialogue cursor sound that plays whenever a letter crosses the screen, I notice, is completely absent. Little touches like that from the game devs are pretty good at heightening the tension.

There's a snake charmer in the corner with 5 blue snakes in each basket.

He asks us if we've ever heard of a minigame concerning snakes.

A man with a cane across the street from the house with the cell holding the villager tells us about a pyramid and the treasures there.

Inside the house near him are explorers wanting to get some loot from the pyramid. Another's surprised the pyramid hasn't sunk into the sand.

The third man in the middle gives us more info about the pyramid. 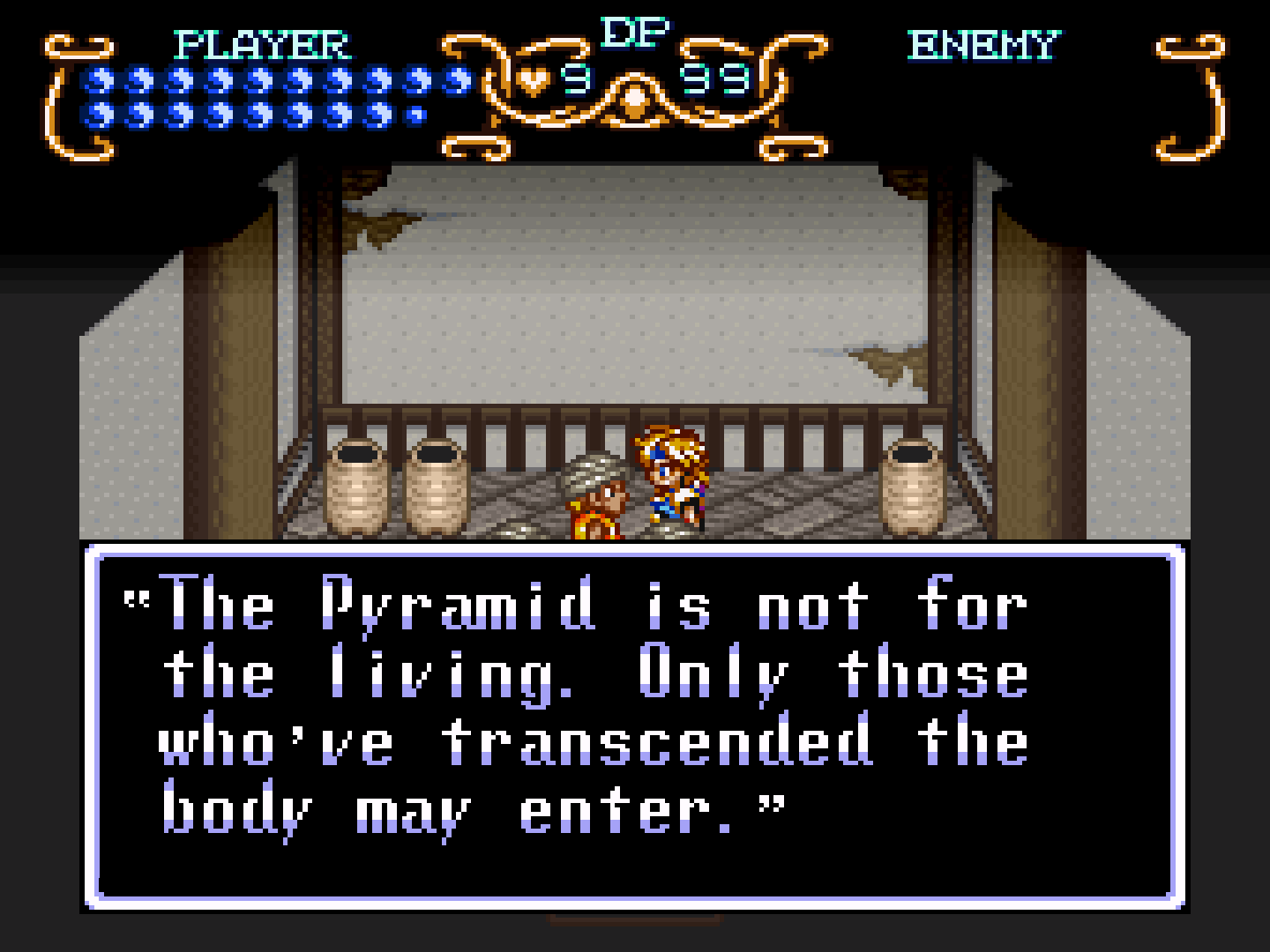 Explorer: "These are the words...The pyramid is a big tomb. The living can't go in? Hmmm..." Wait, does that mean someone has to be taken care of before entering the pyramid?

Inside another house, the music changes. This is where they make the carpets... 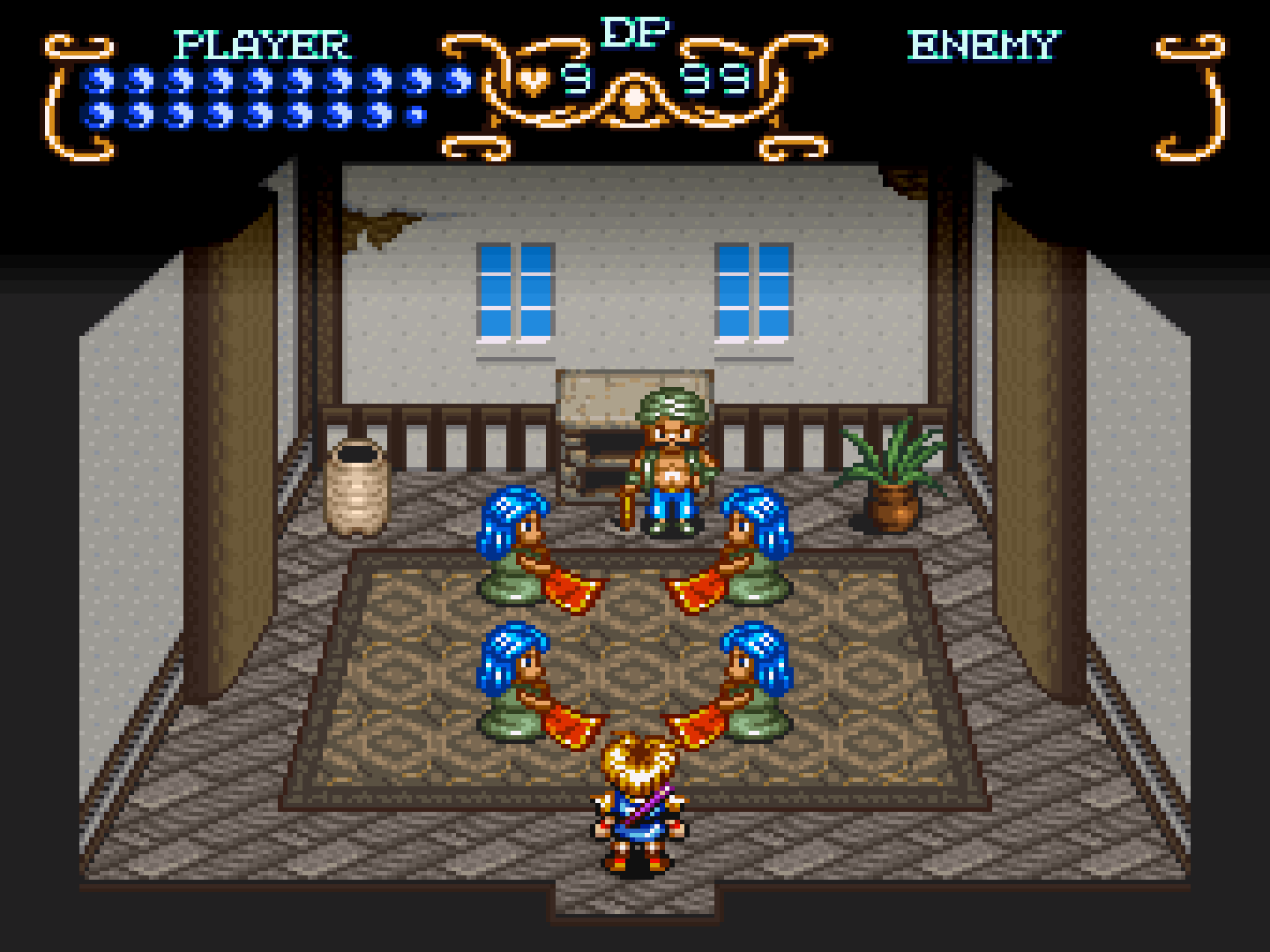 The women are too busy (and probably frightened?), and don't say anything.

I head into the house next to Neil's and play some games with actual snakes.

It's basically a whack-a-mole game.

Our initial score is 42.

I'm guessing we win a Red Jewel if we get fifty.

I save again and stop my session here since I'm running out of power on my phone.