I revert back to Will, make our way up to the second floor, and slide down the east crawlspace.

The remaining floating heads are still as elusive as ever...

But we end up winning another health boost! Will's health is now at 36!

Out of curiosity, I have Will jump down anothet chasm, landing near another chest, containing a Red Jewel!

I wander around the main hall a bit, checking where each of the remaining chasms lead down to...

Now at the third floor, where there are tons of ghostly, sliding heads around.

I'm getting some ideas from the aesthetic and layout of this dungeon...

We slide down the west crawlspace...

More floating heads and rock giants later, we come across another flight of stairs.

Remembering the online map I looked at last session, there's supposed to be another chest at the southwest end of the fourth floor.

Before us, though, are two sliding heads.

I take care of one while the other slides away, as I get distracted by a floating head.

Another sliding head's nearby but a rock giant stops us from going further!

I take care of the remaining enemies here, mostly purple heads, and we win another health boost! That's 37! My goodness, the game devs are being too generous, giving away health boosts for free!

At the end of the corridor, we find another Red Jewel!

We go to the nearby chasm to jump back down to the third floor...

On another note, I forgot to mention how the purple sliding head enemies work. They only slide when attacked. Plus, how fast they go is based on the number of hits they take.

After clearing the area, and winning a defense boost, we climb up more stairs to the top of the temple... 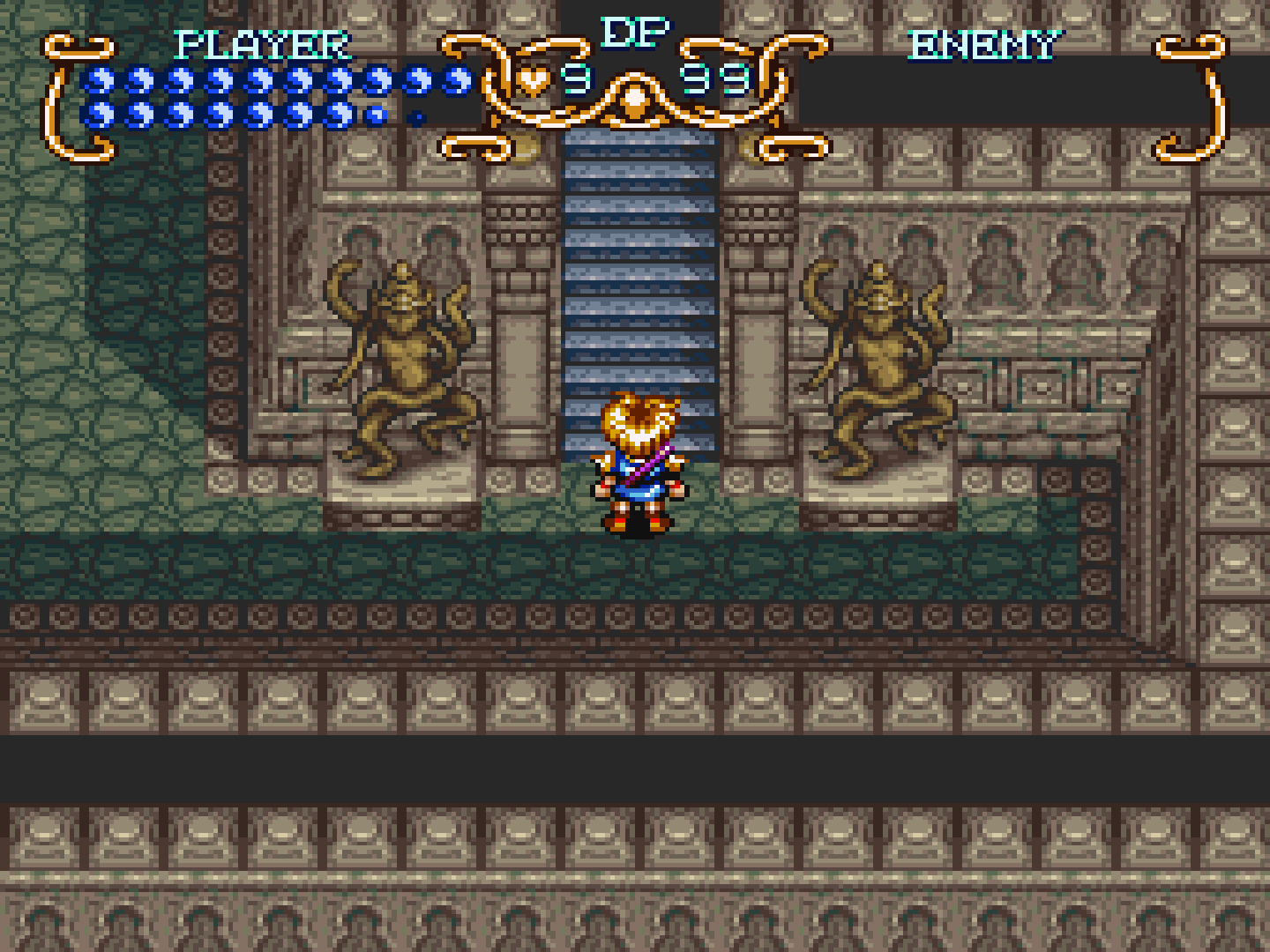 The moment of truth...

At the dais, lies a burning blue flame. 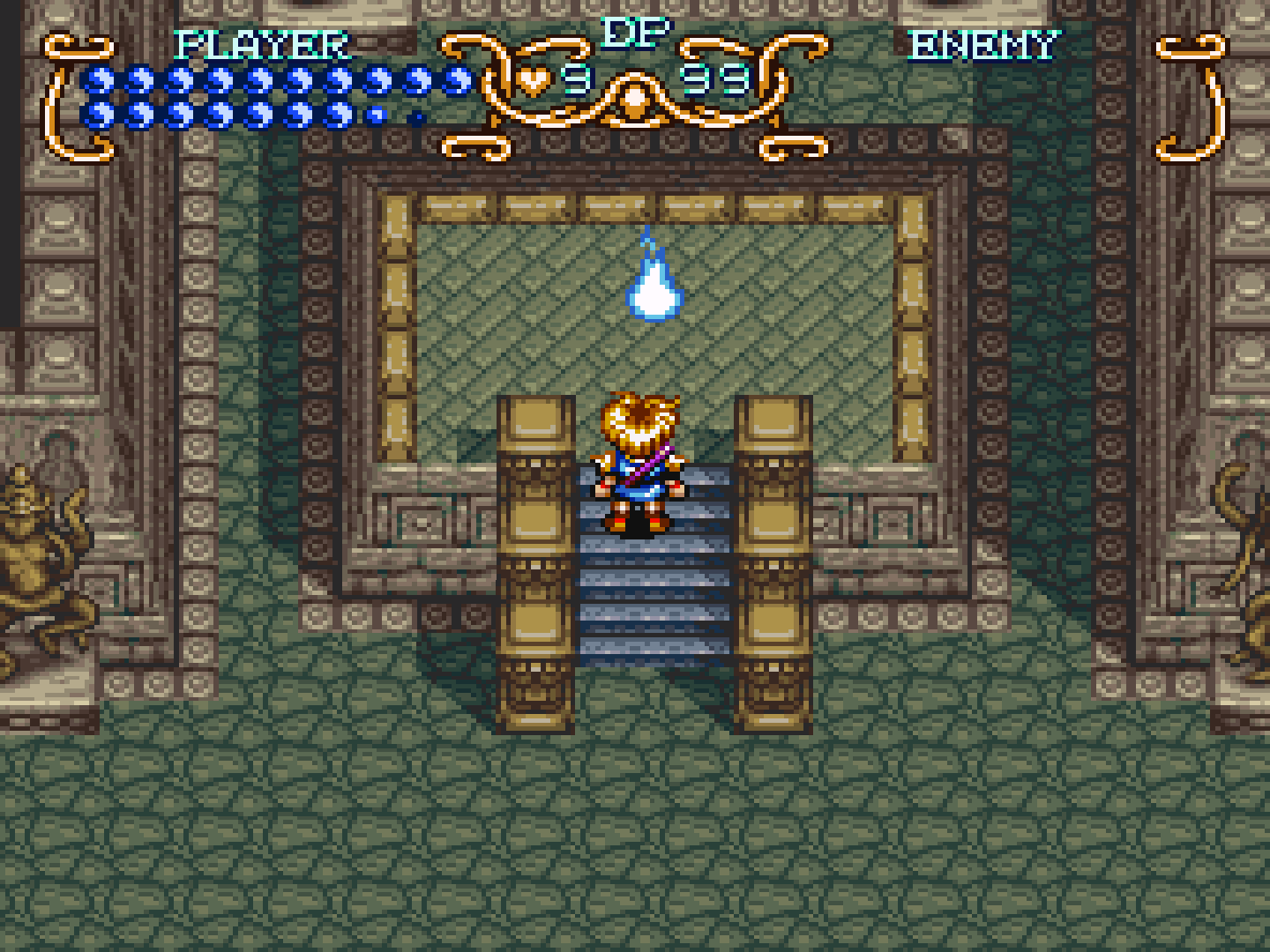 What secrets, O Blue Flame, are you going to reveal to us? 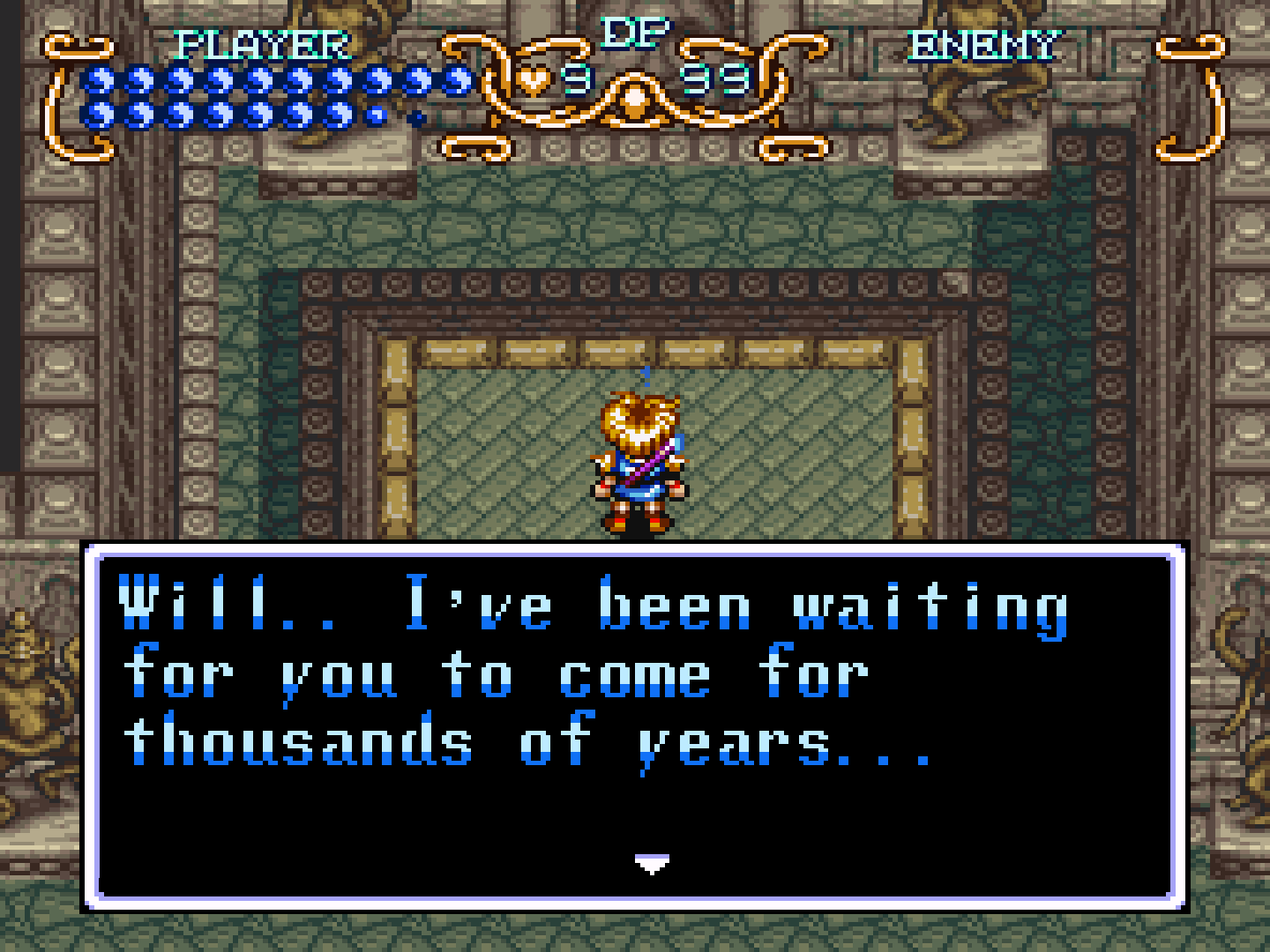 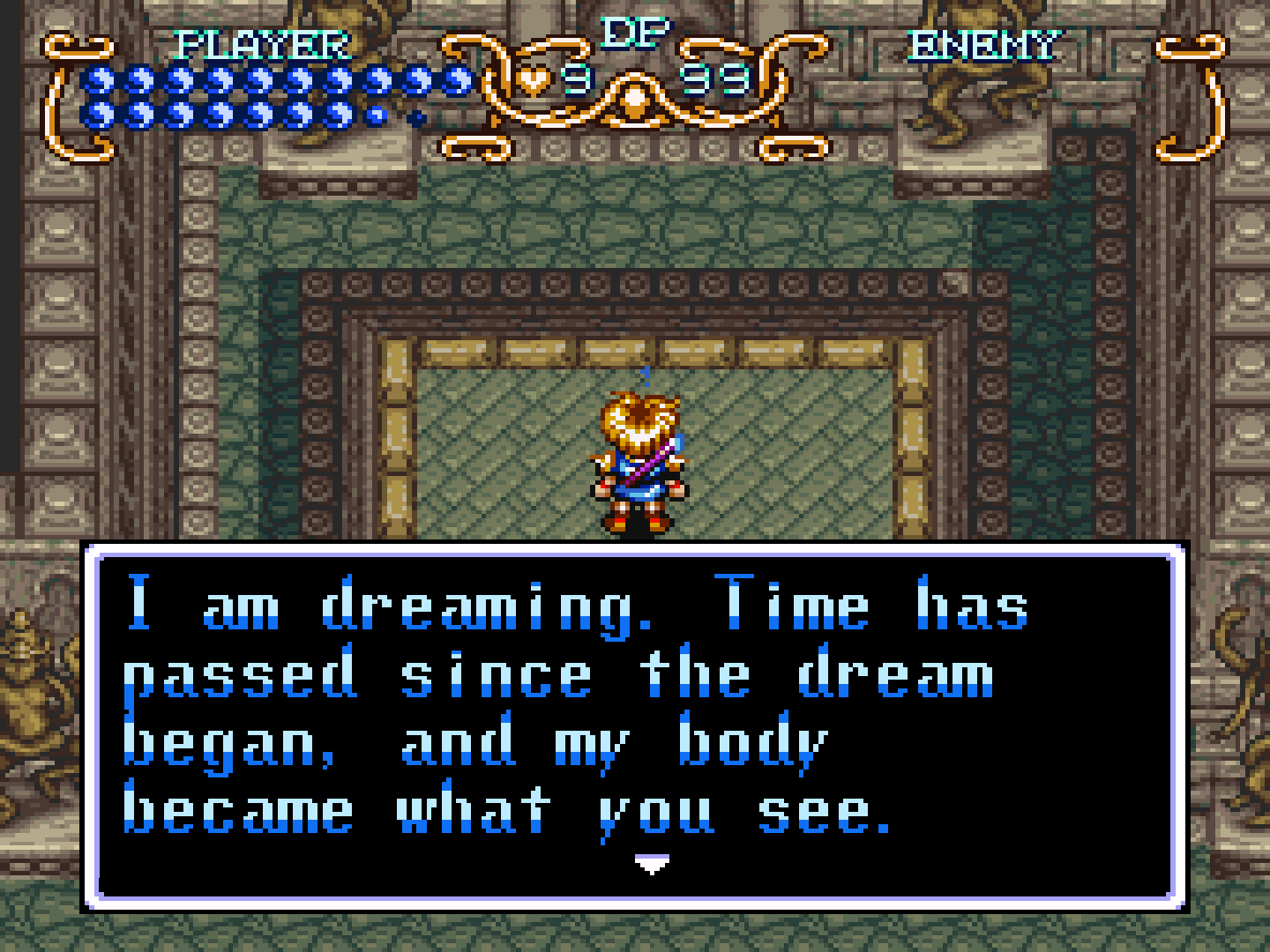 Will asks another question that I've got too: Who, or what, is this flame?

"I'm going to show you a strange image. Close your eyes."

The view glows red and spins around, zooming down at an image of a modern-day cityscape. 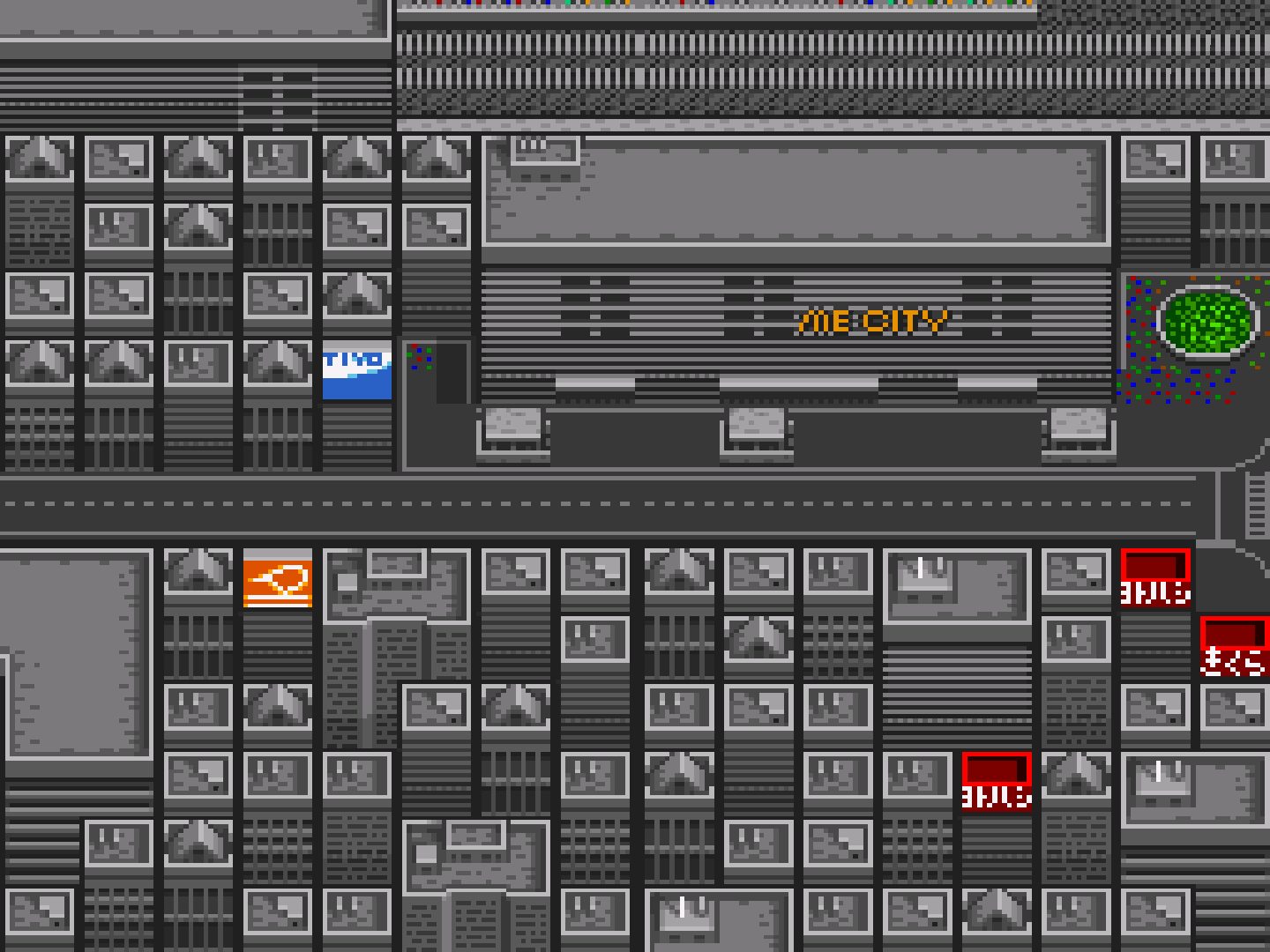 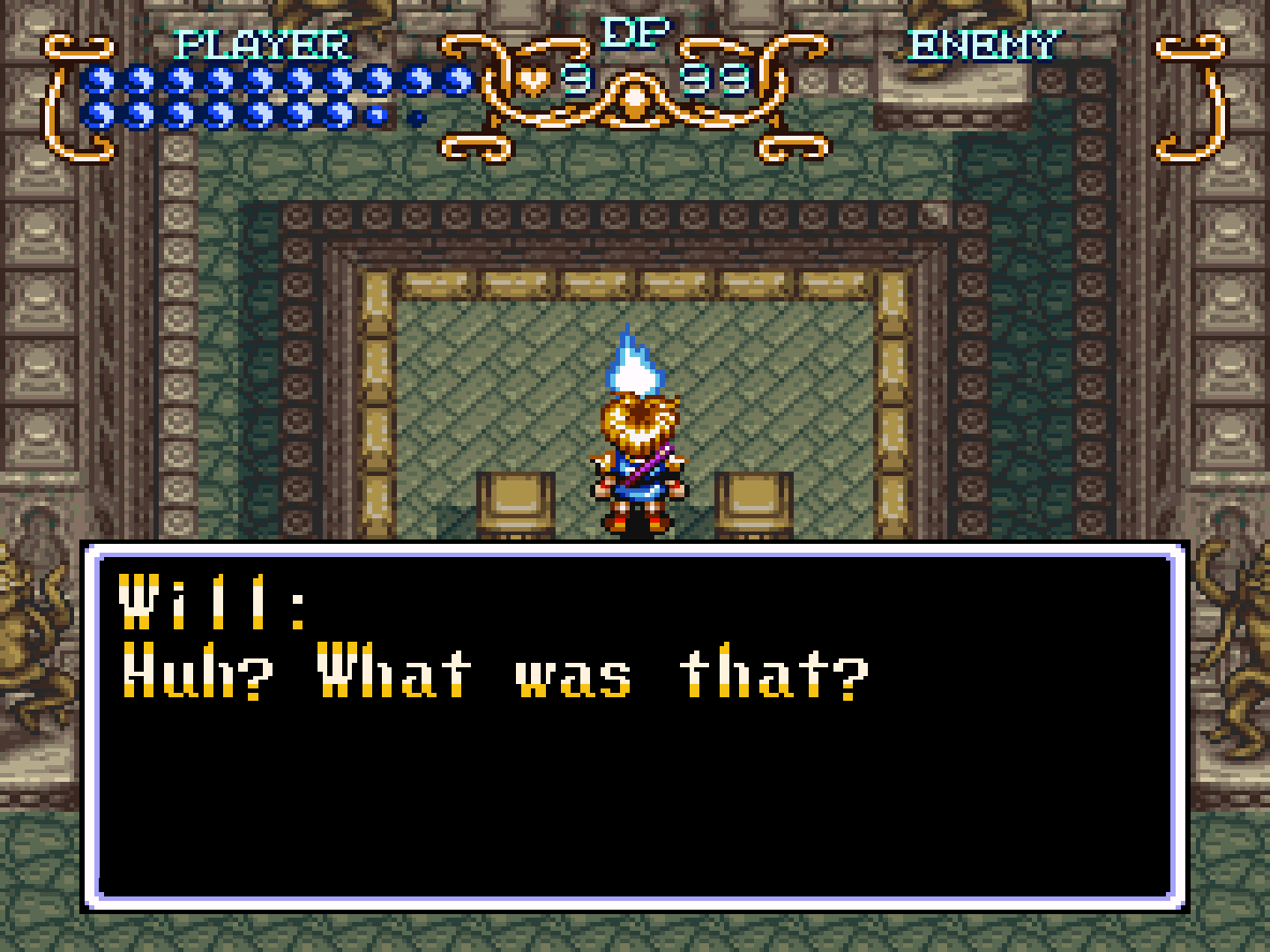 My question exactly, Will. Did we just see the future?

Will: "That world is all grey...this world has blue water, green mountains, brown earth all over."

What the blue flame says next is another chilling thing. 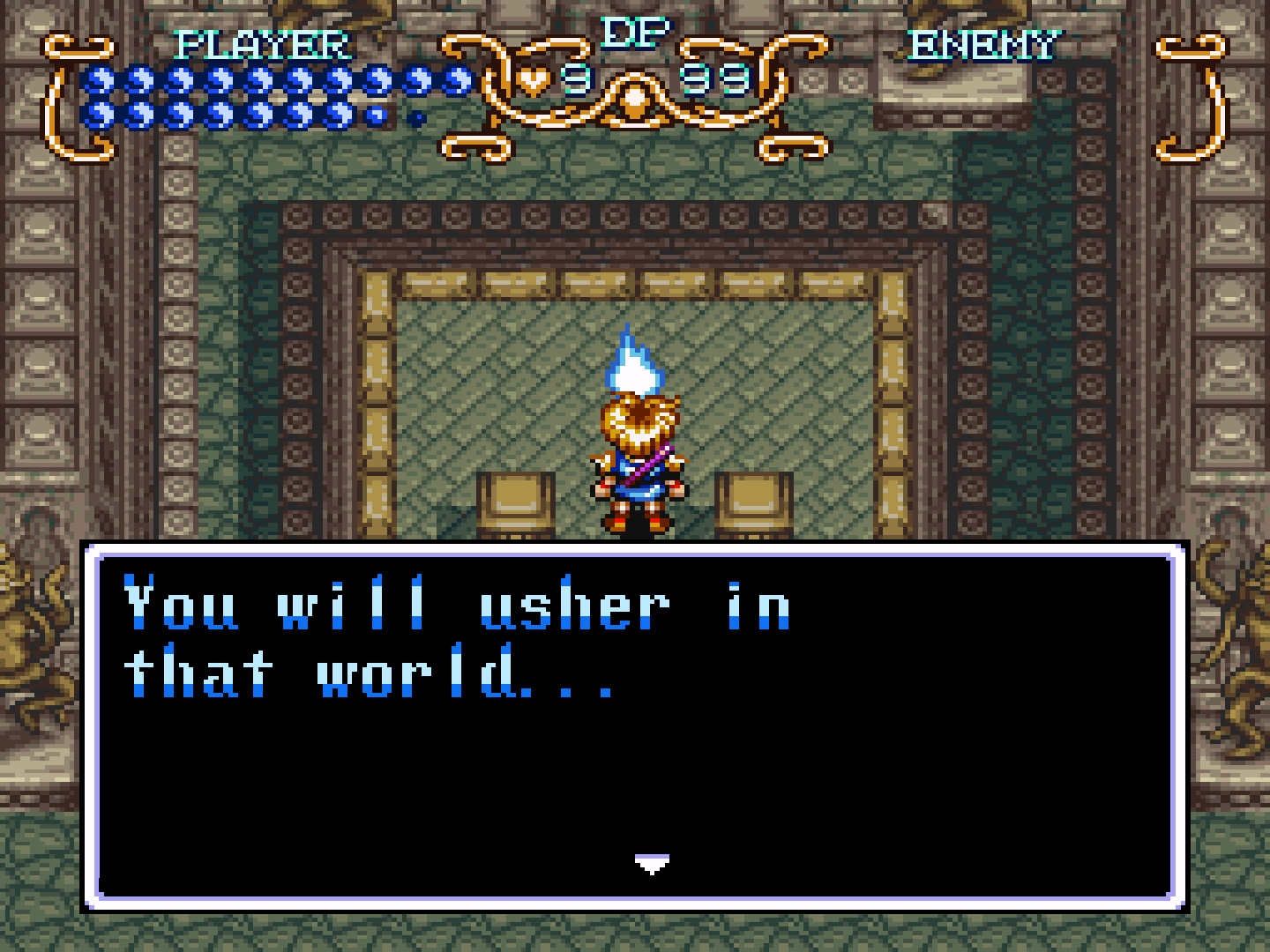 Will doesn't believe it either. 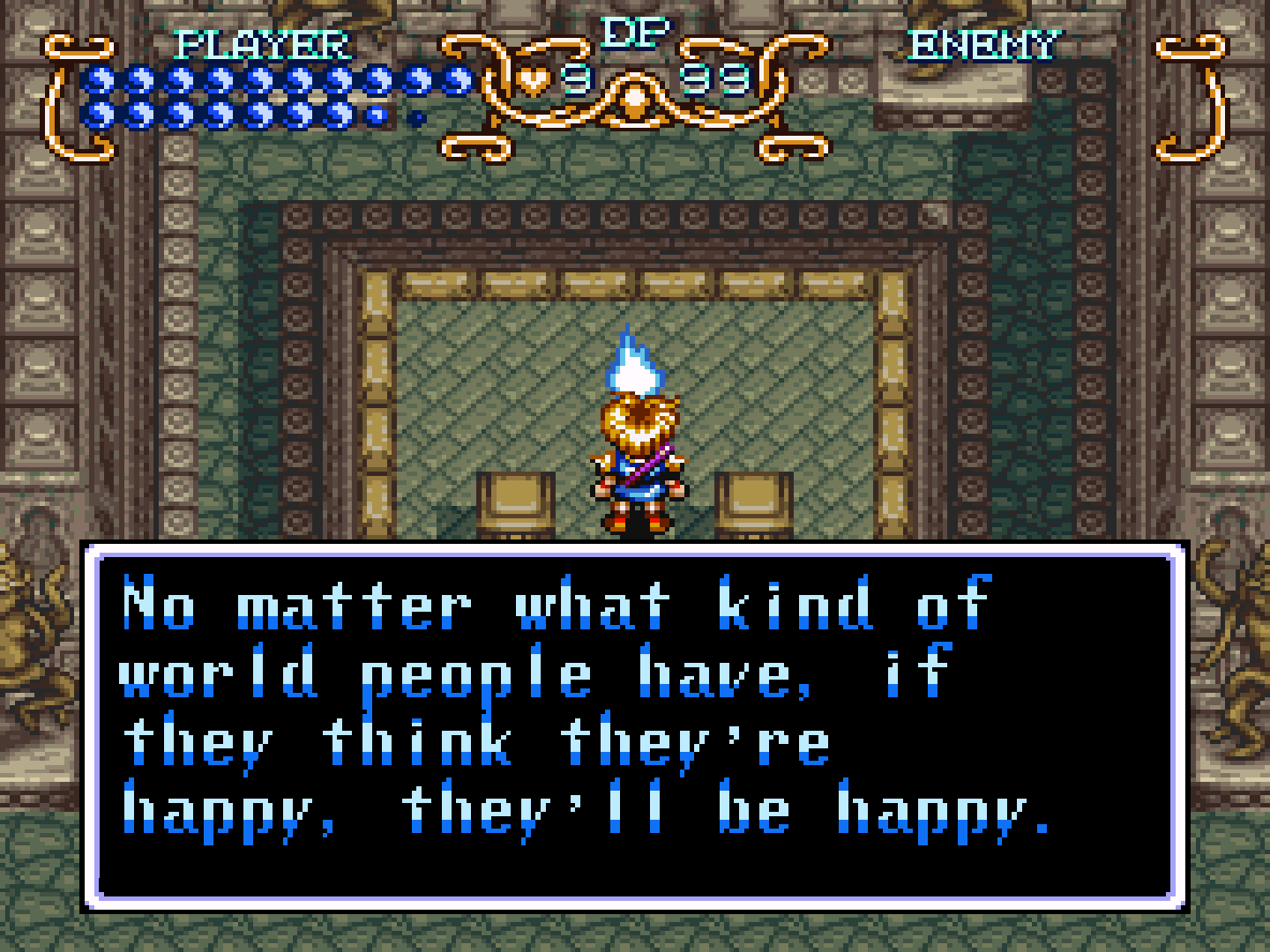 The blue flame returns their dialogue to the present and commands us to restore the villagers to normal. 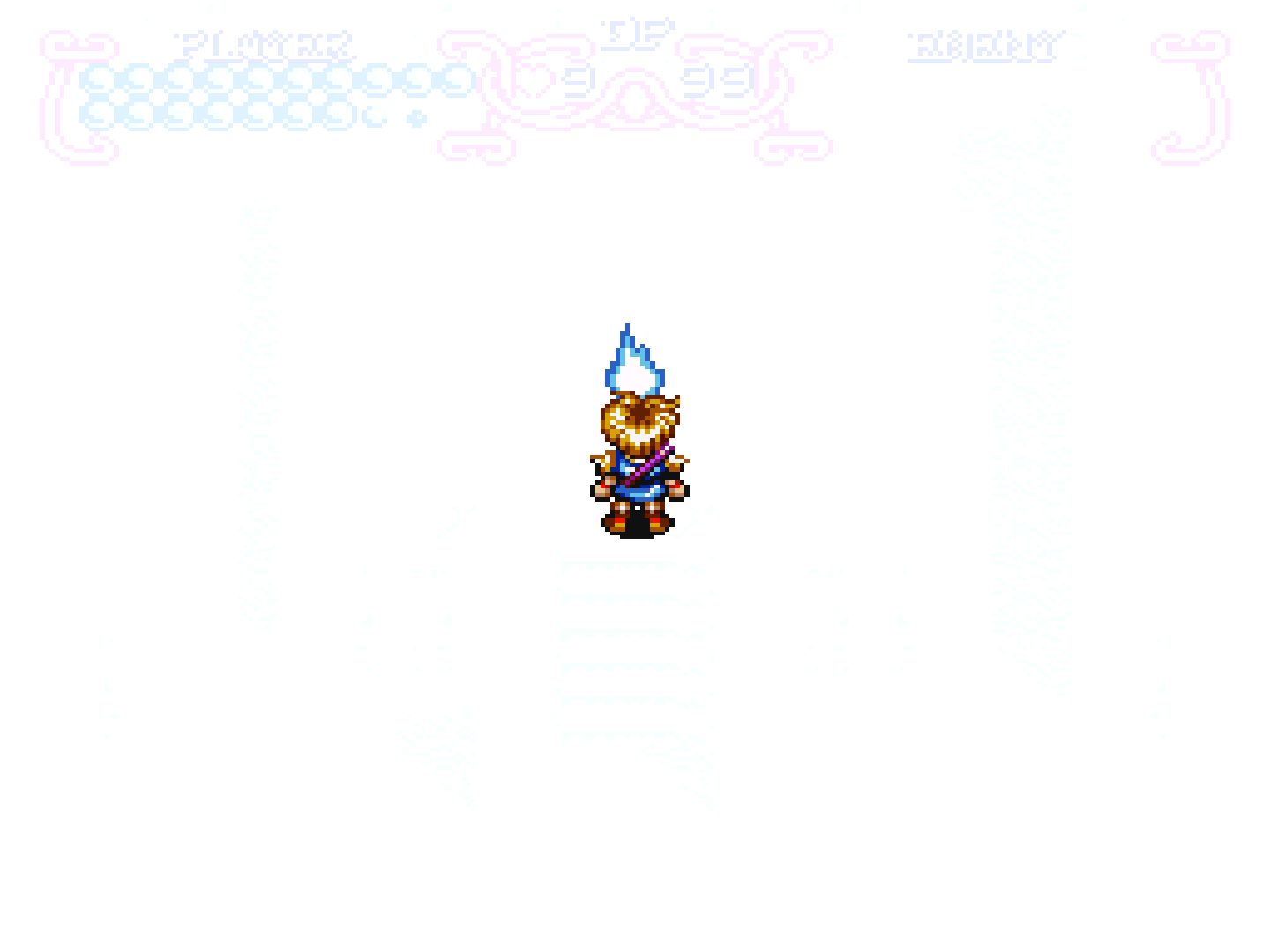 Will: "When the blinding light stopped, I stood quietly, as if nothing had happened. Then I found the Gorgon Flower held tightly within my hand..." 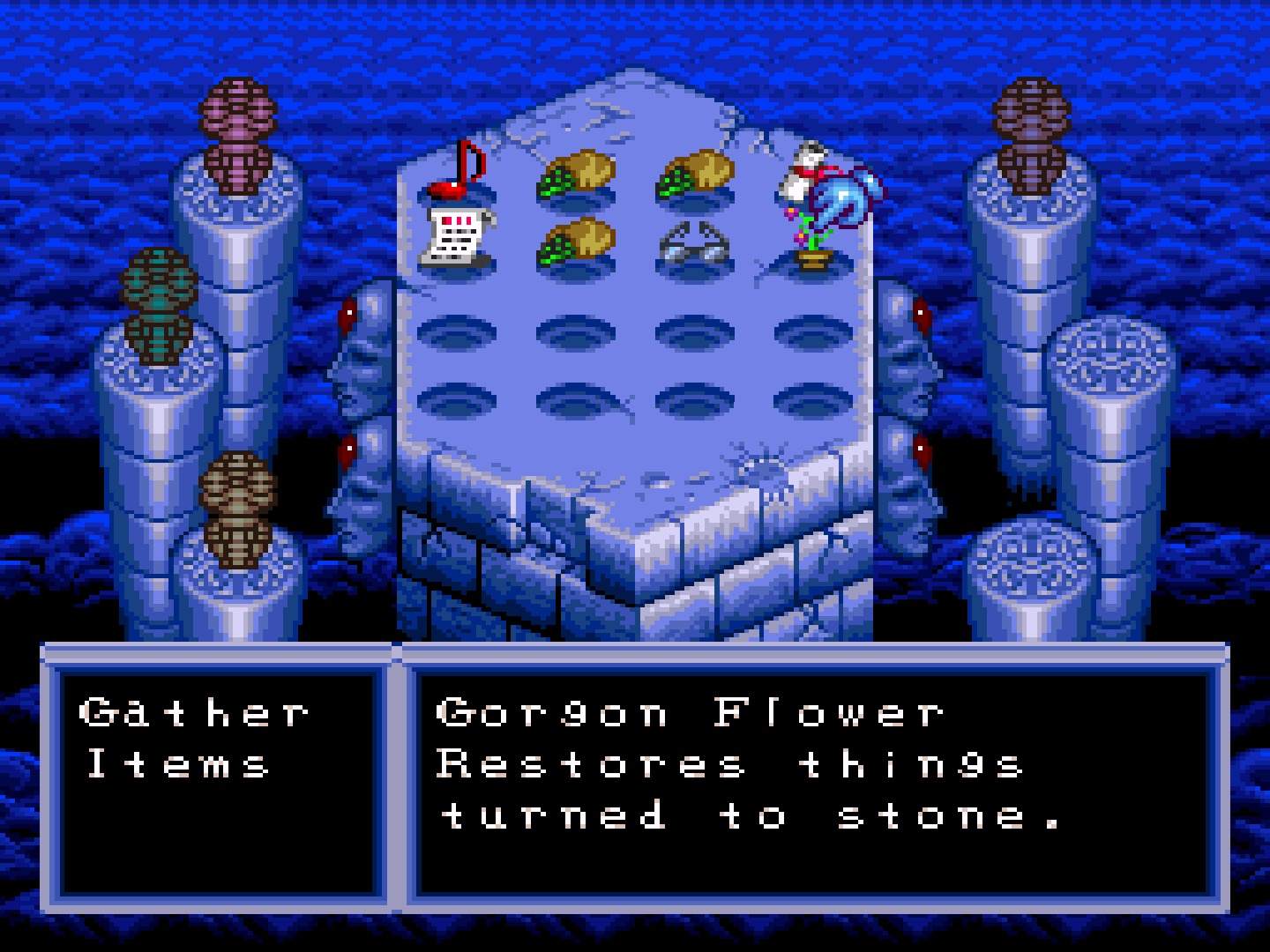 No Mystic Statue here, or boss, so far.

I wish there was a shortcut to get back to the village...

What did the vision that the blue flame showed us mean? Were they warning Will about that future? Was the flame blaming Will? Or was the flame pointing to the dangers of the potential of humankind in general?

As we head back down the second floor, a blinding light obscures our vision! I equip the sunglasses immediately!

At least all the enemies are gone at this point!

We finally save at the garden's Dark Space portal.

I keep forgetting to do this, but here's the map for Angkor Wat.