A rock giant at the entrance leaps down, showering the chamber with rubble!

Eastwards, purple sliding heads await, with some of them moving...

North, where two more rock giants leap and bring the temple down! 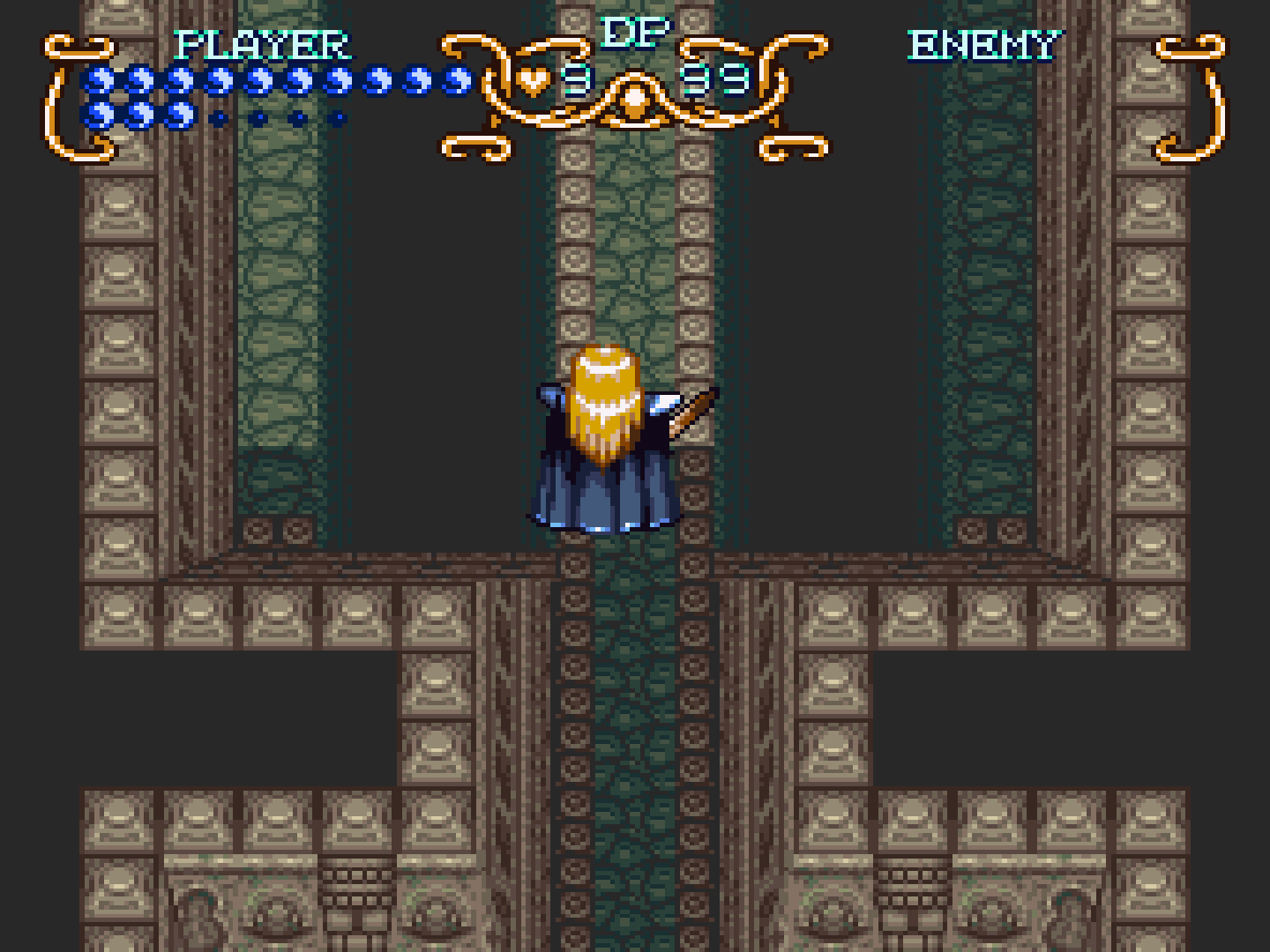 Two sliding heads are sliding on the sides of the wall past the chasms...

We get a defense boost after taking care of the horde! 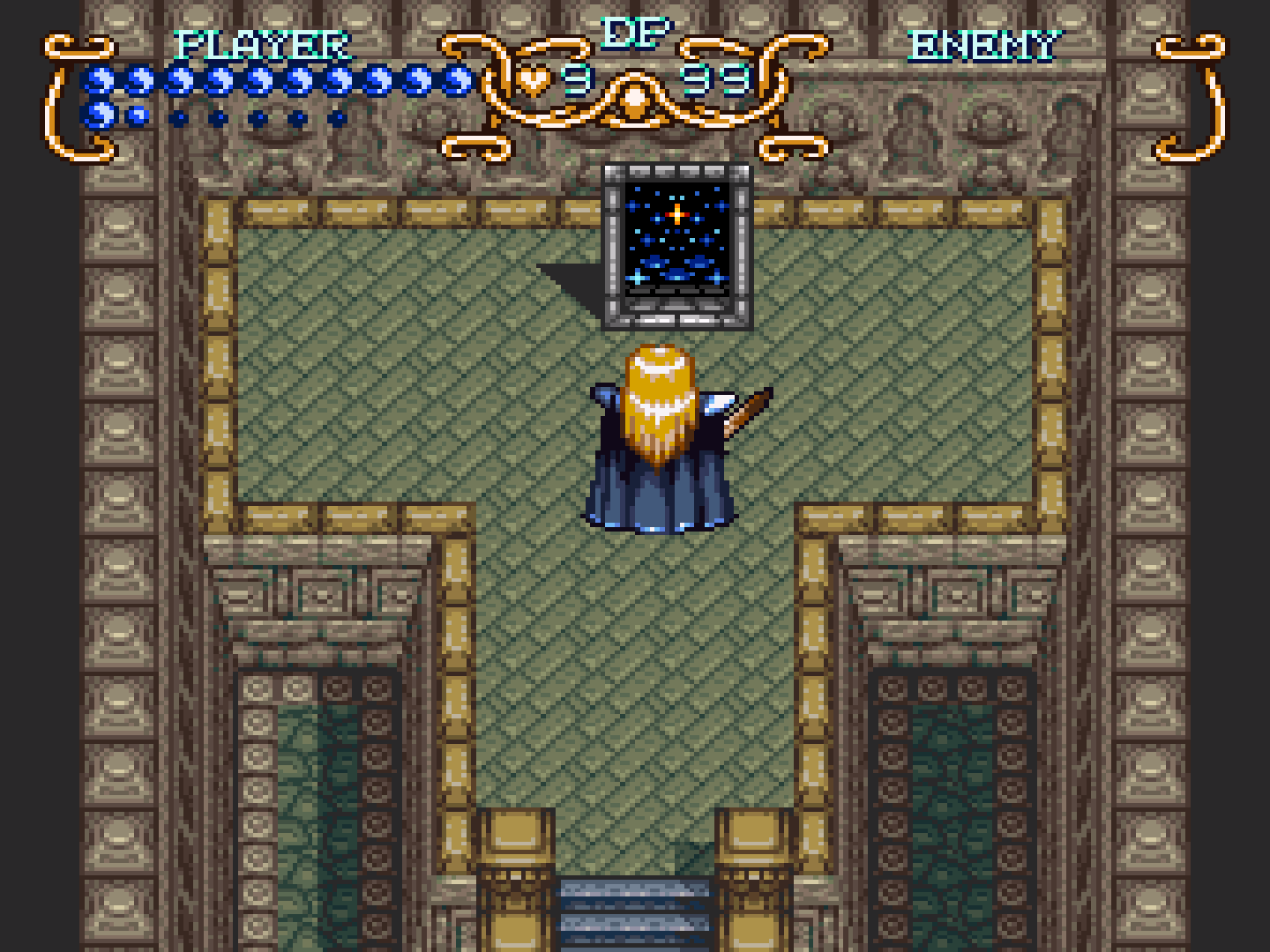 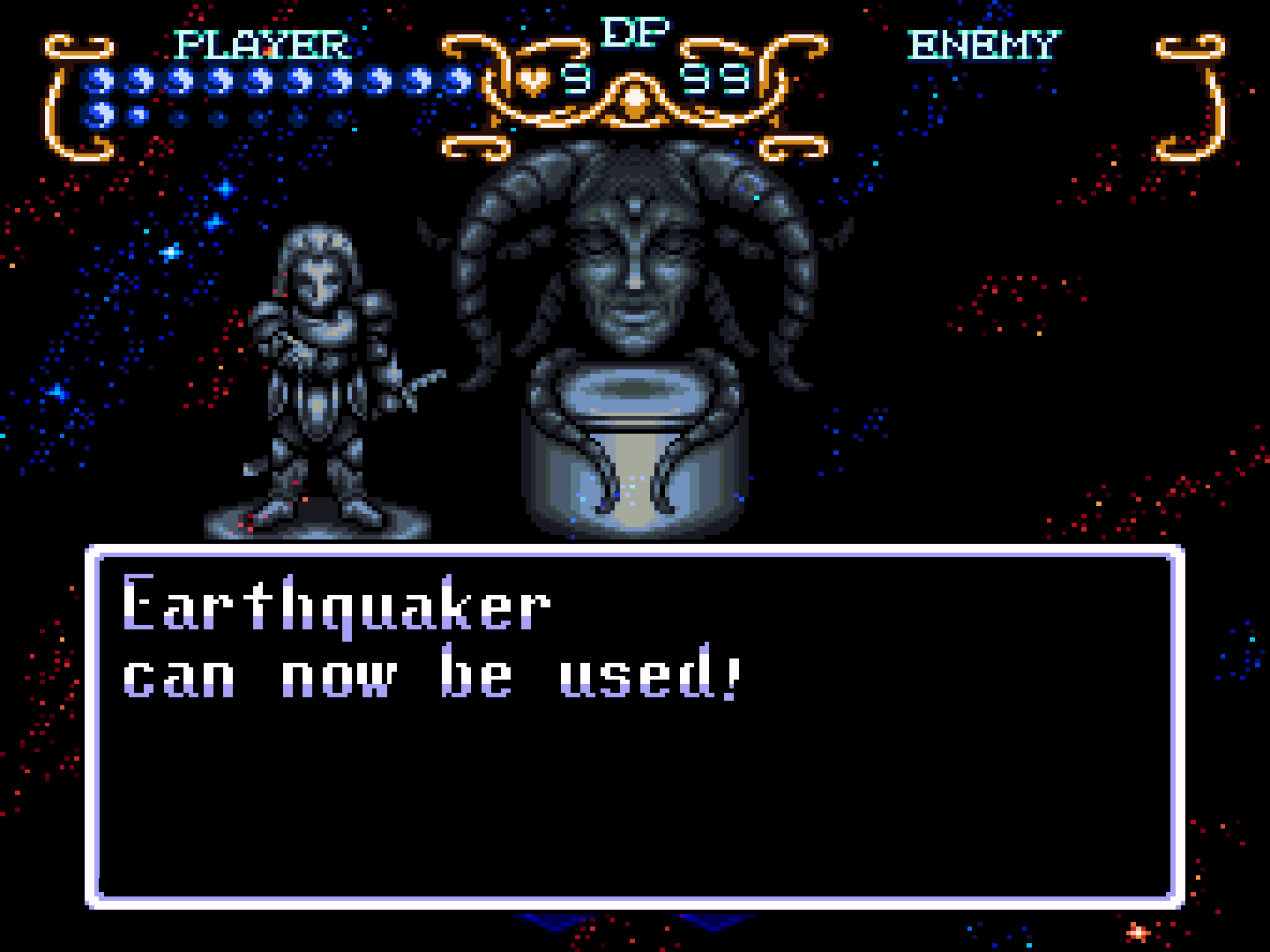 Gaia states the obvious next.

Gaia: "The Earthquaker [...] causes earthquakes. The enemy won't be able to move for a long time. Push the attack button when jumping down."

As we go to her, Gaia gives us more advice on how to use Freedan's new power, which is a short recap of what she said to us earlier. I'm guessing this is a powerful move, as she states the same benefits of it over and over again.

Heading back to the entrance of the inner passage, and going west, I test out Freedan's new ability.

Freedan strikes the earth with his sword!

Unfortunately, I can't attack enemies when they're not moving!

But it was because the rock giant was attacking when I performed the move that caused him to be invincible.

I try to move forward, but this rock giant can't stop spinning! 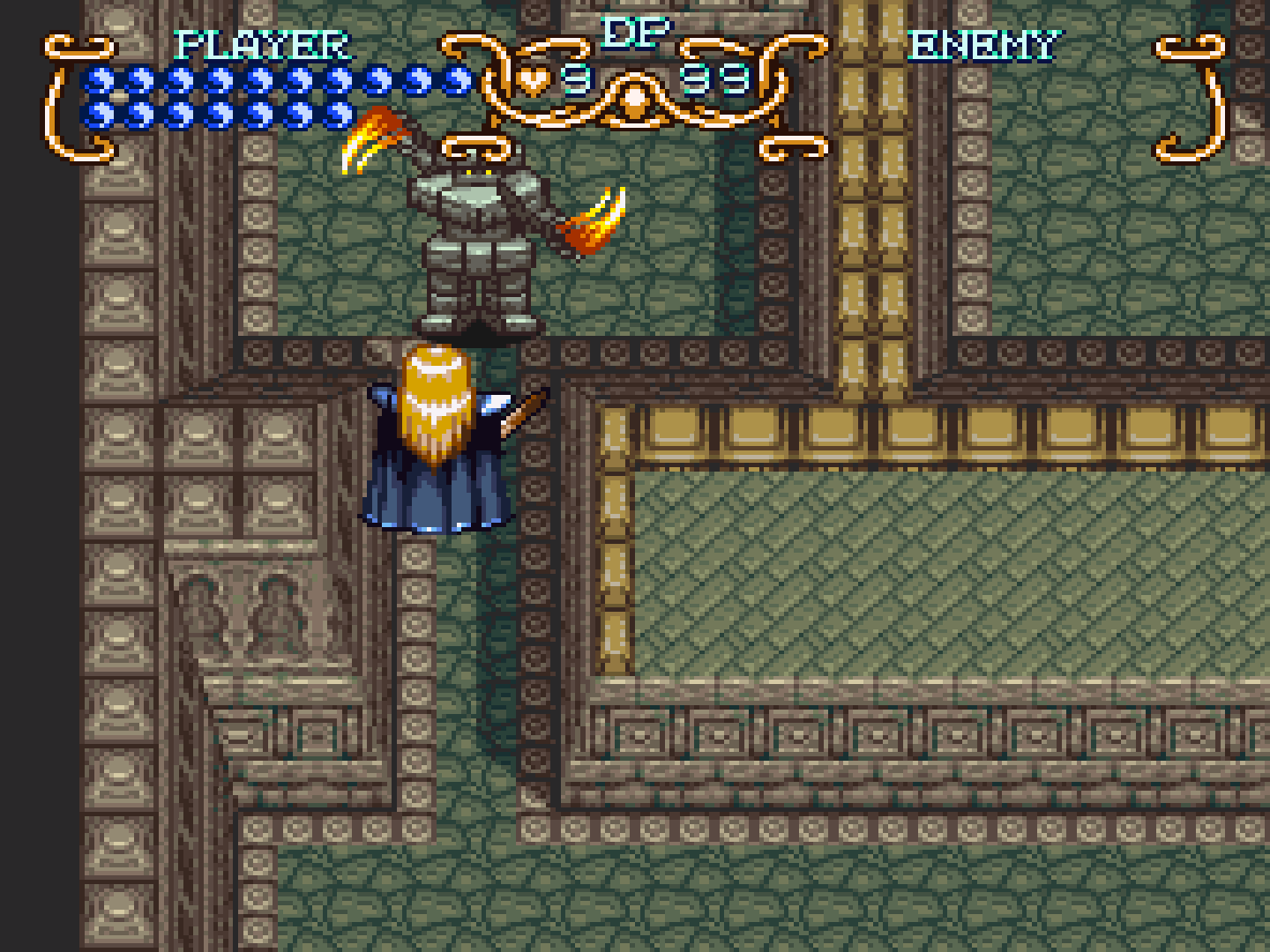 After going back out and returning, I finally realize what to do...that rock giant was placed there to test Freedan's new ability.

Northwards, I take care of a fleet of enemies in this long passage, and winning another health boost! Now up to 35!

At the end of the hall, we see another chest...

We go back, taking the south east exit. 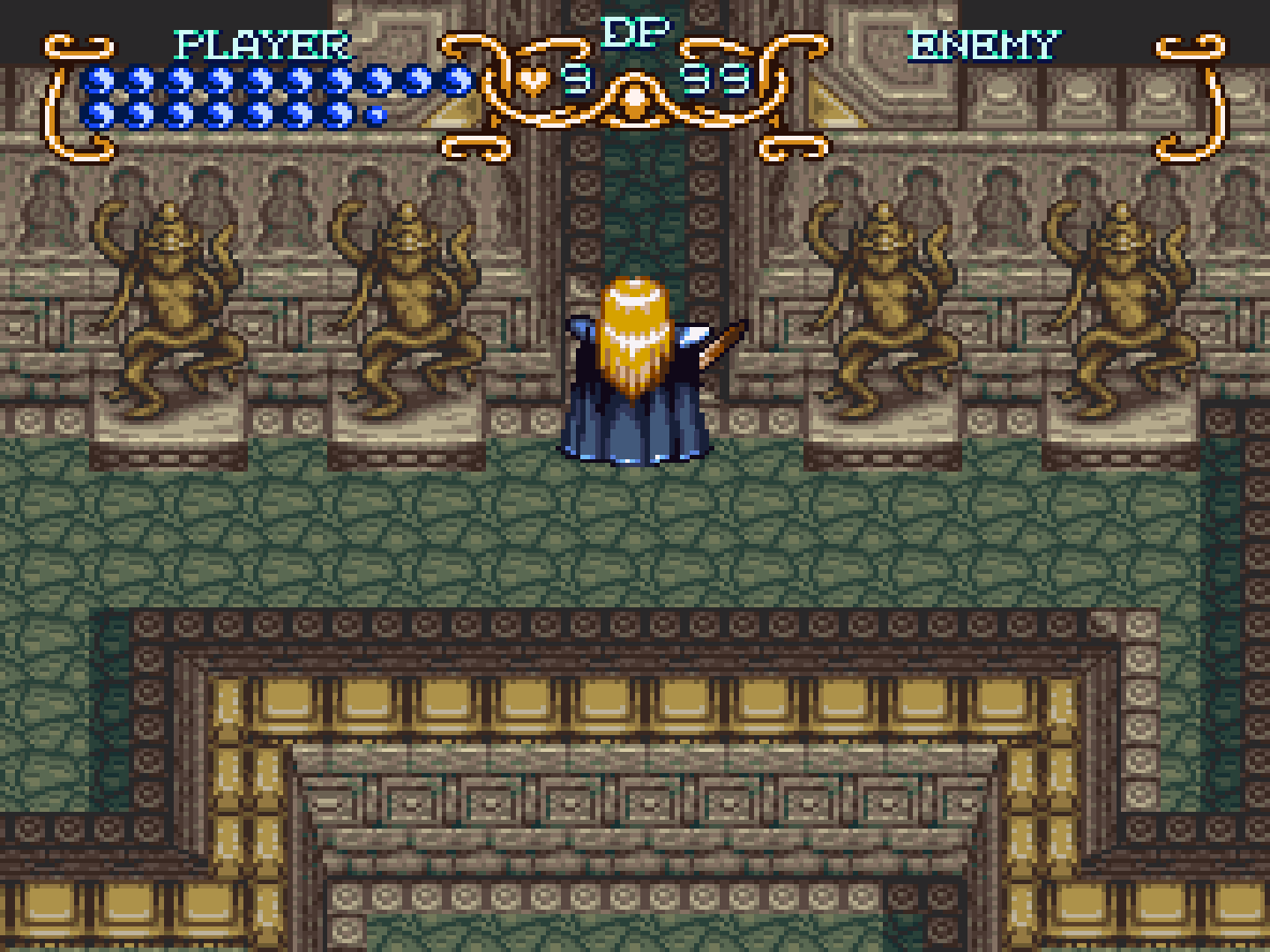 We're now before the garden to the main hall.

I circle around the temple, and see another extinct explorer and a diary.

"There is a temple where a spirit is said to live. In the Main Hall, second floor, a bright room blocks the way. You must go through it to reach the corridor. The bright light masks the corridor. If you want to meet the spirit, you must wear the Black Crystal Glasses. I saw something shining on the ground near the Main Hall, but I had to run. Probably [it's] the glasses from the legend..." 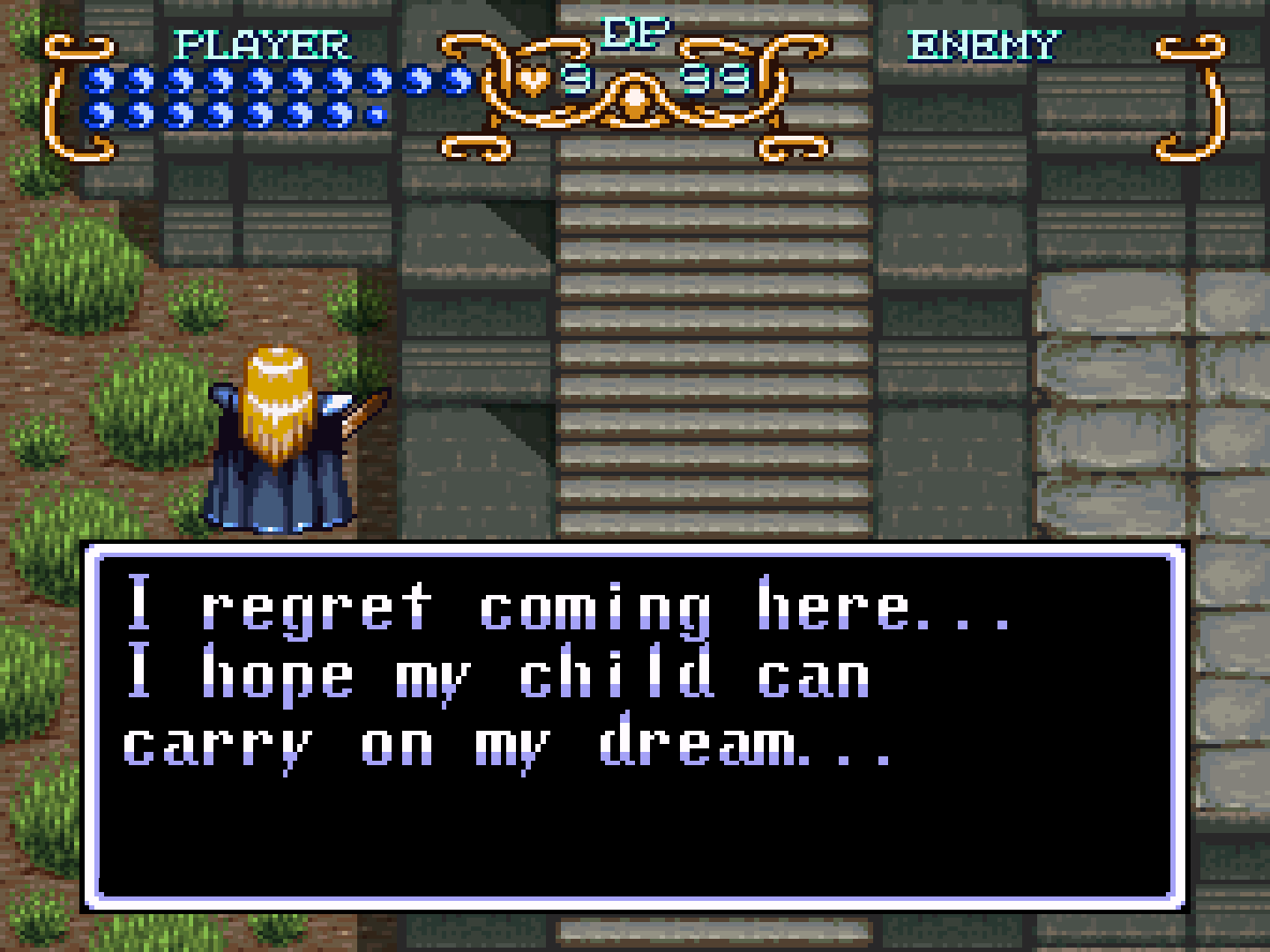 We check the east wing of the entrance. Nothing here.

I check the antewall perimeter to take care of more enemies here.

Theres one left in this area, but they're hard to reach...

Checking the online map again, I decide to go inside the main hall. 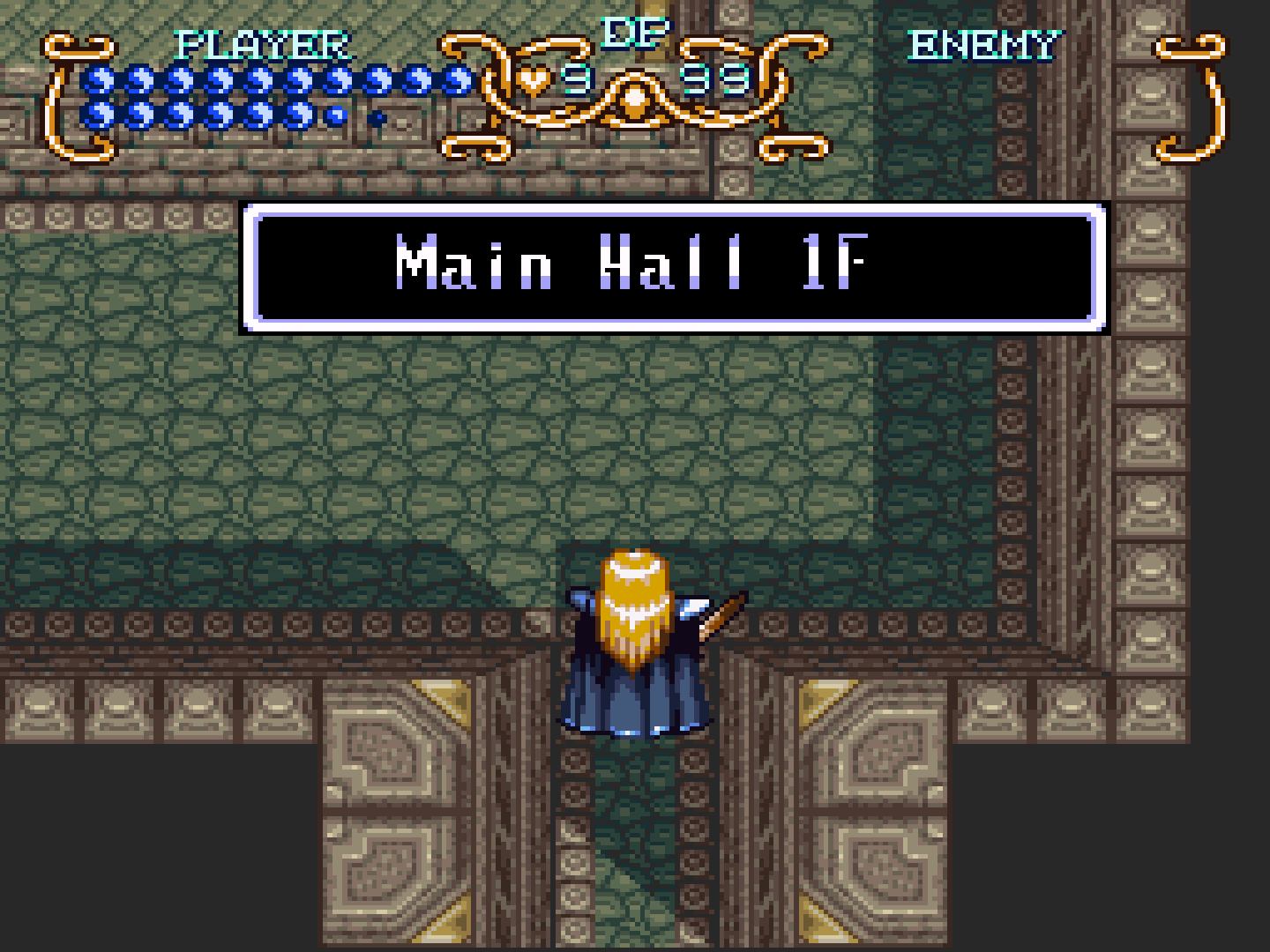 The wave of floating heads await us in the west passageway of the main hall.

The sliding heads take a longer time to take care of because of the long passage they have to cross.

We win another attack boost for this passage!

There's a Dark Space gate, but we can't reach it...

Back outside, where we take care of the last enemy, a crawling bush!

We win a defense boost as a prize!

I see something sparkling near where the bush was...are those the glasses? 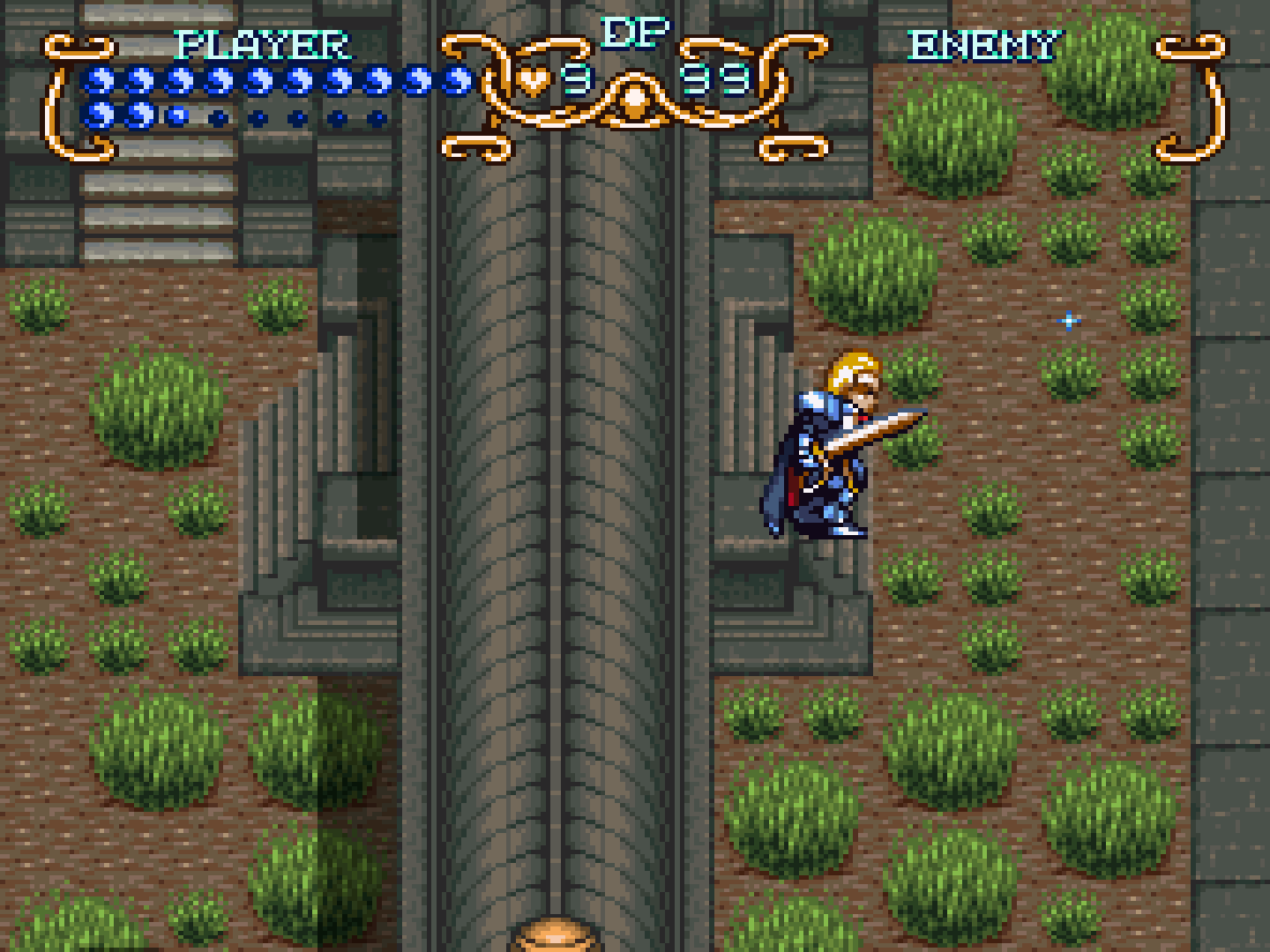 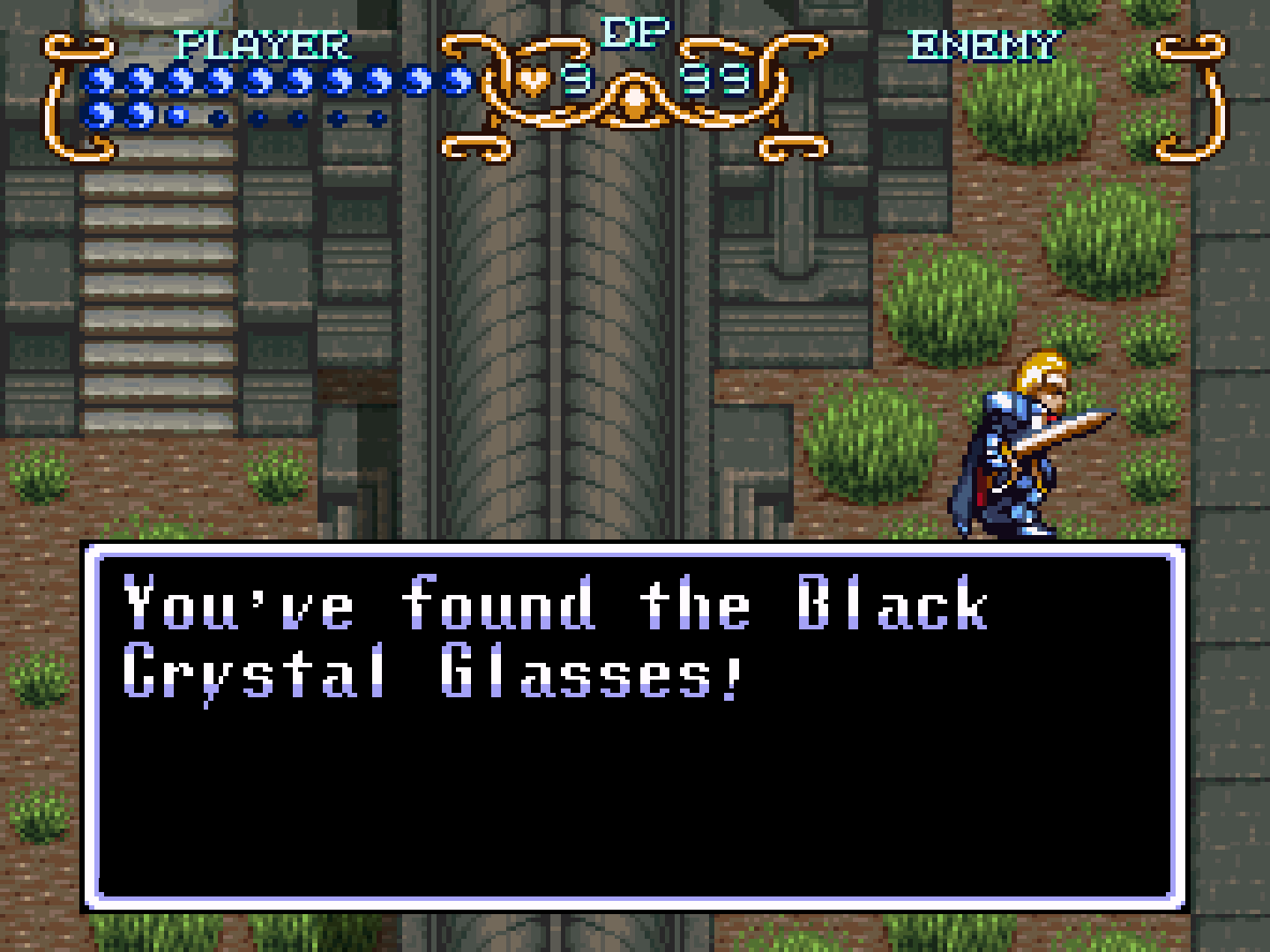 I have Freedan equip the Black Crystal Glasses.

I'm laughing a bit at the img of Freedan or Will wearing sunglasses...

Up to the second floor, where a prompt tells us something, but I accidentally skip through it.

They look like miniature versions of the shrines from Soul Blazer.

It looks like I'll need Will's help to go further in this bright chamber.

After taking care of the sliding heads, we make a leap down into the chasm below. 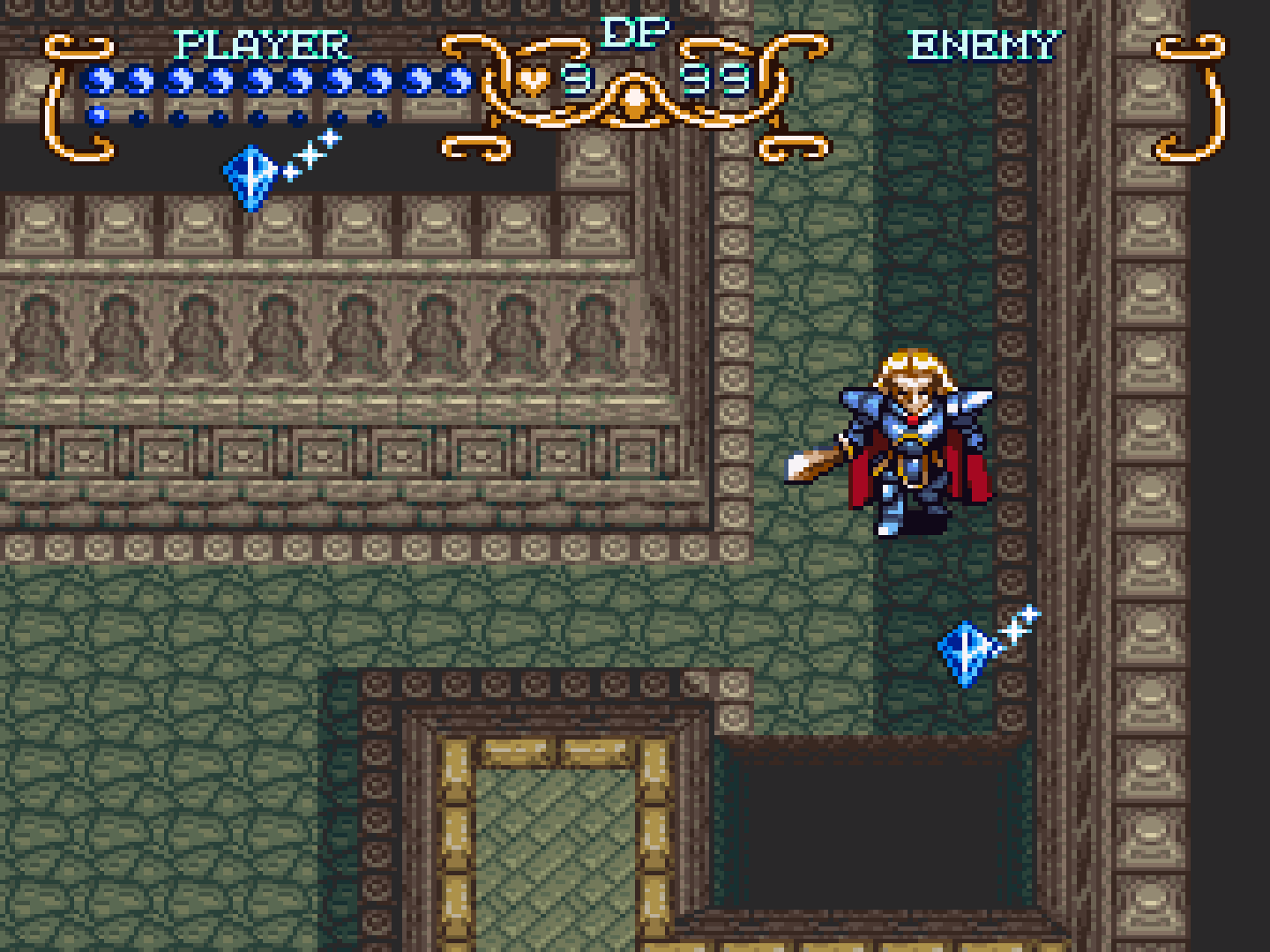 We land near the Dark Space portal and enter in.

Gaia has more words for us.

Gaia: "This is the temple at Angkor Wat." That's obvious. 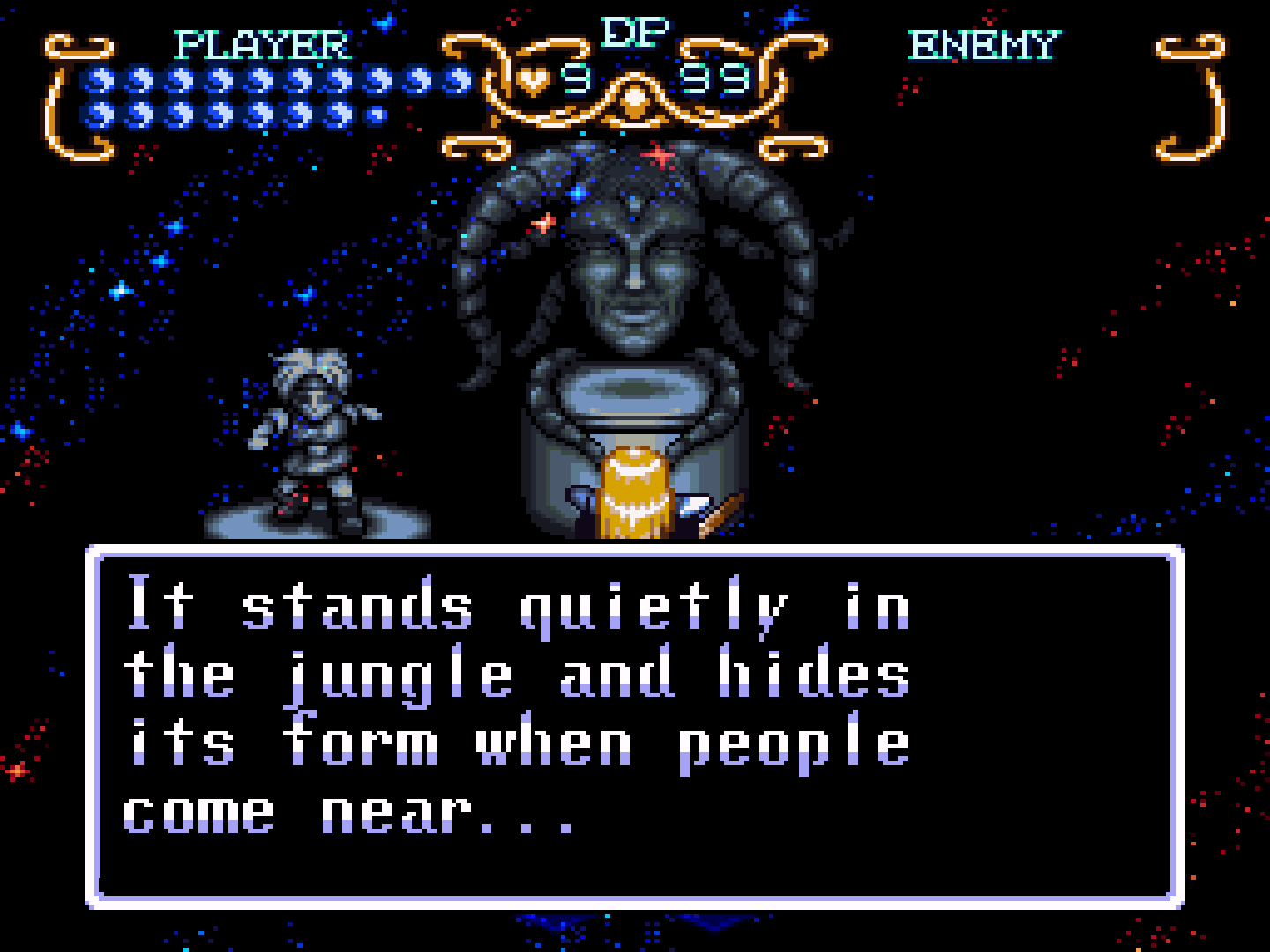 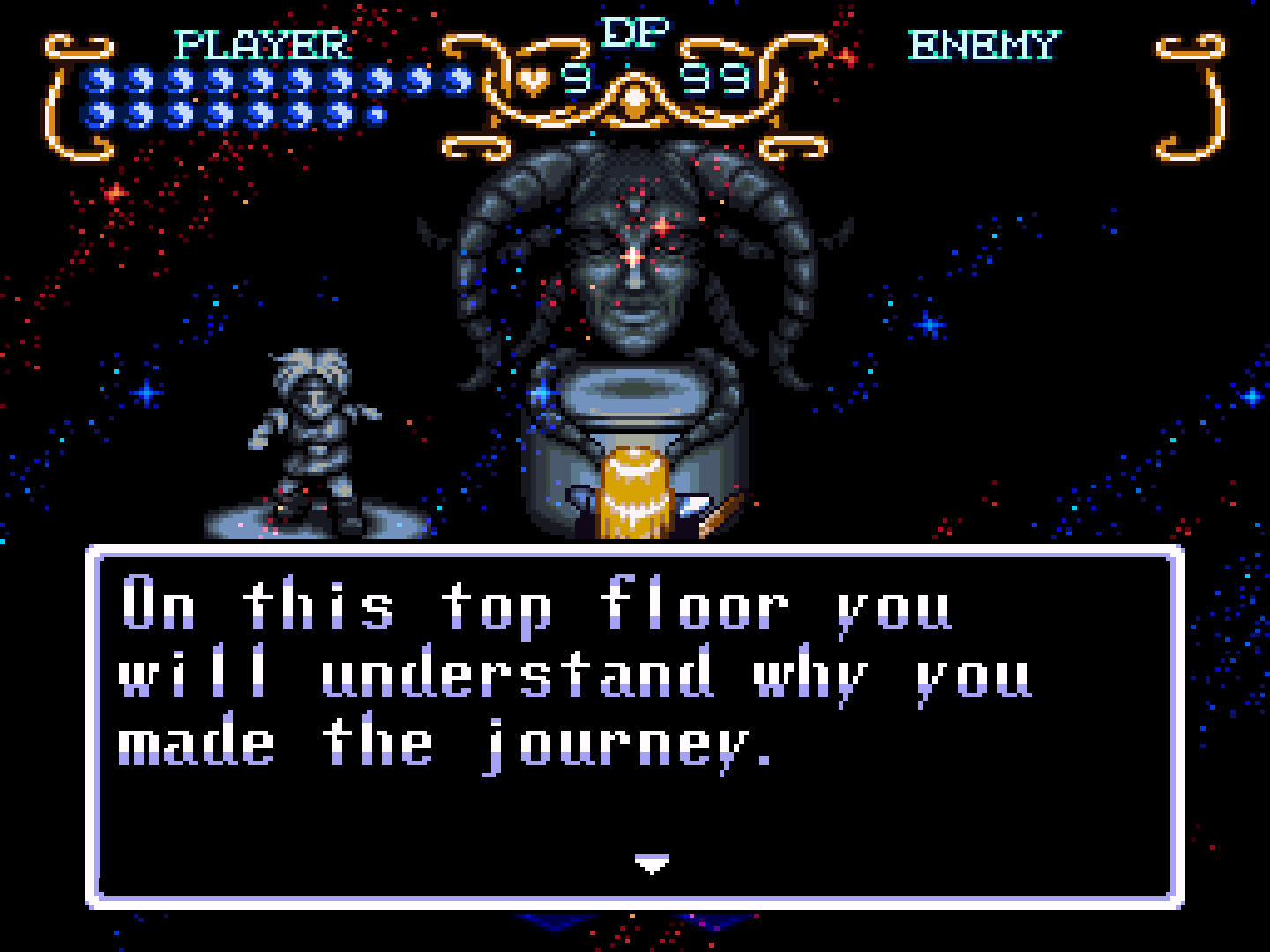 Hmmm, so it looks like more answers are going to surface...this is going to be interesting...