Since I have extra time tonight, I decide to play on and see what happens next...

One of the young villagers is gazing to the northeast. He's asking for the map, but I don't give it to him just yet.

Kara tells us she learned one new word in the villagers’ language. 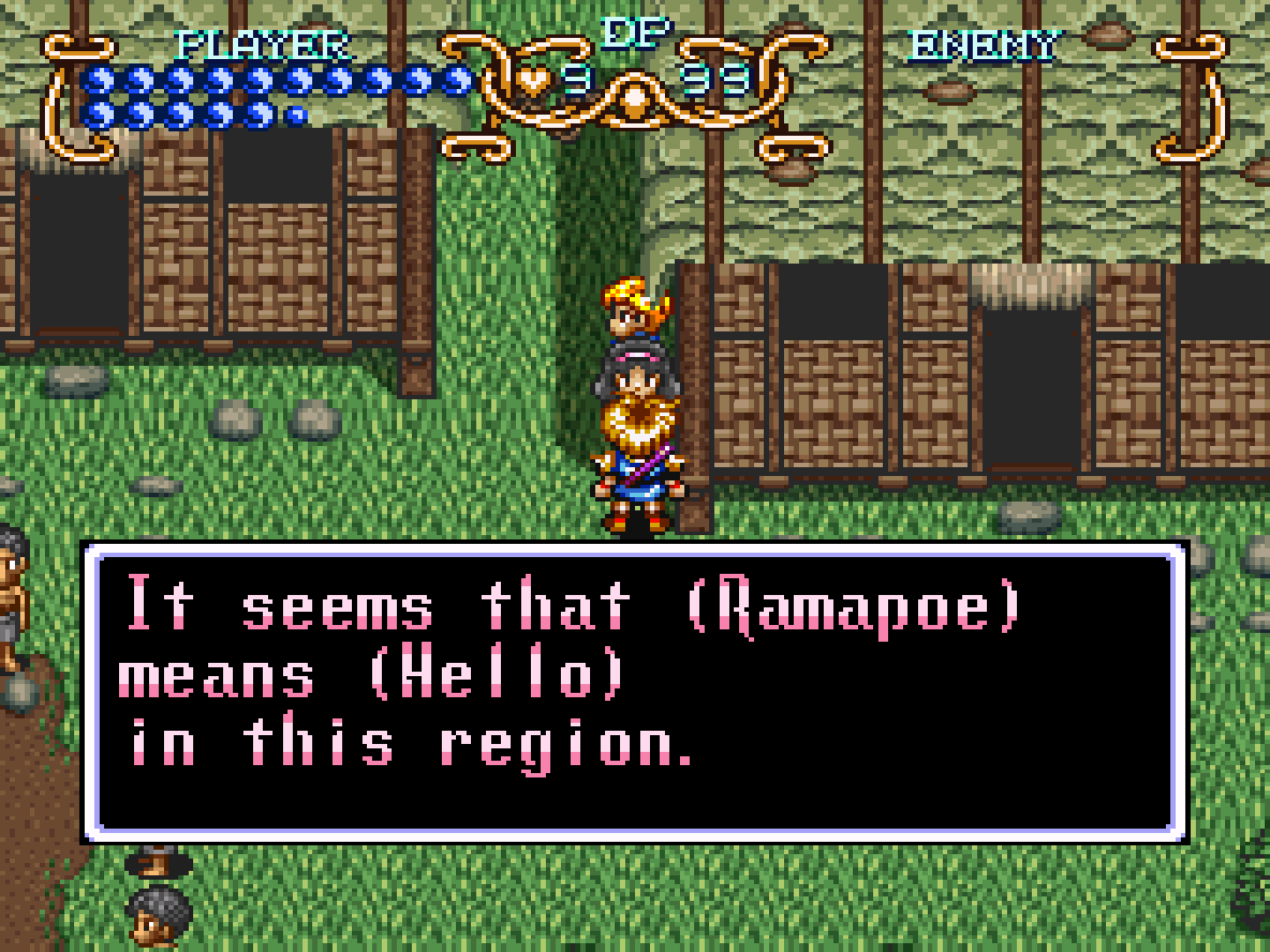 Erik states the condition of the village now. 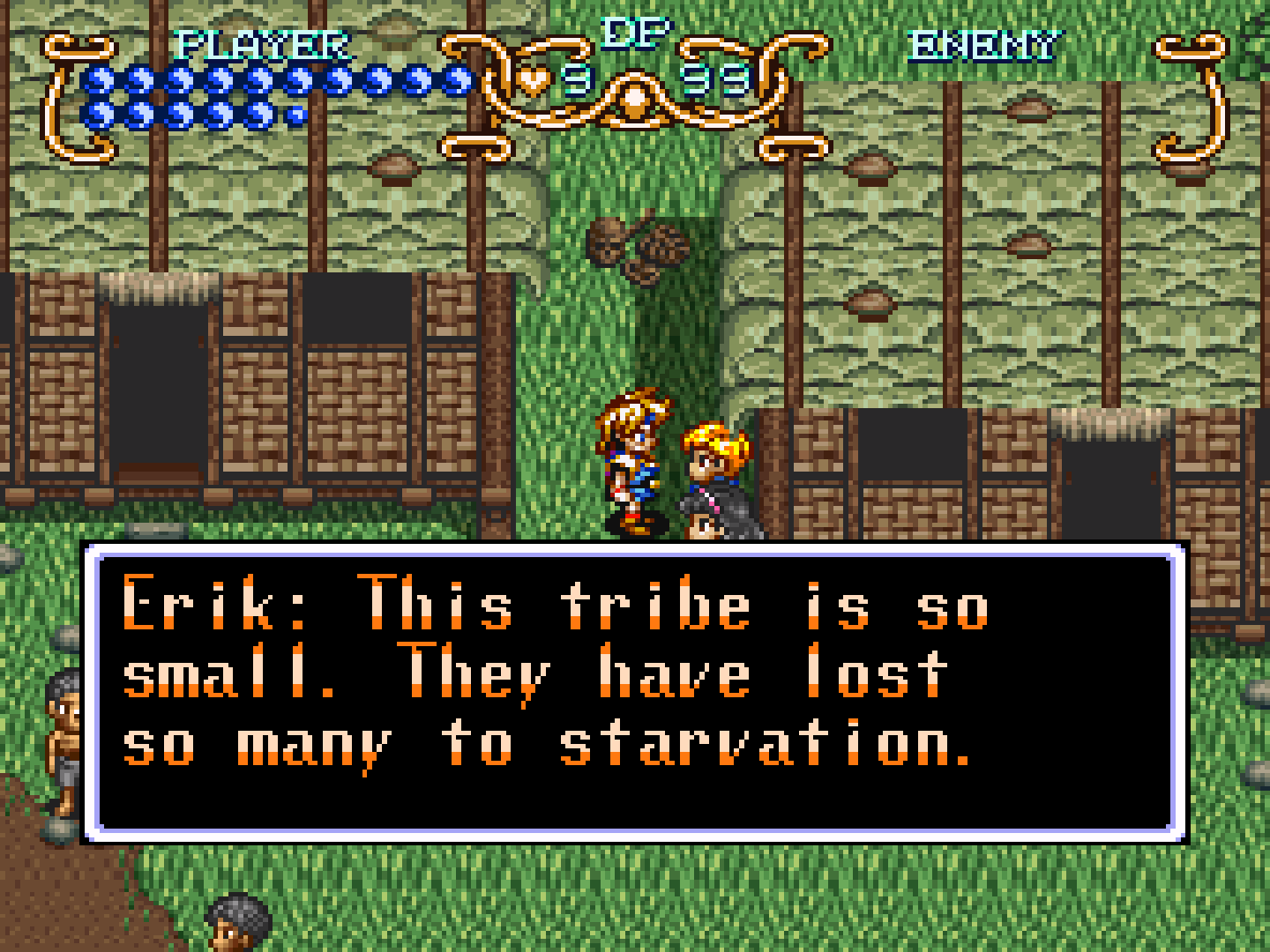 Erik wonders how they managed to survive.

I have Will talk to one of the villagers.

I'm asked if I could stare back at him. I say no.

I take one of the villagers' hands walking around the Hamlet bonfire. We seem to agree, according to the prompt.

Will sniffs. Is he crying for Hamlet? 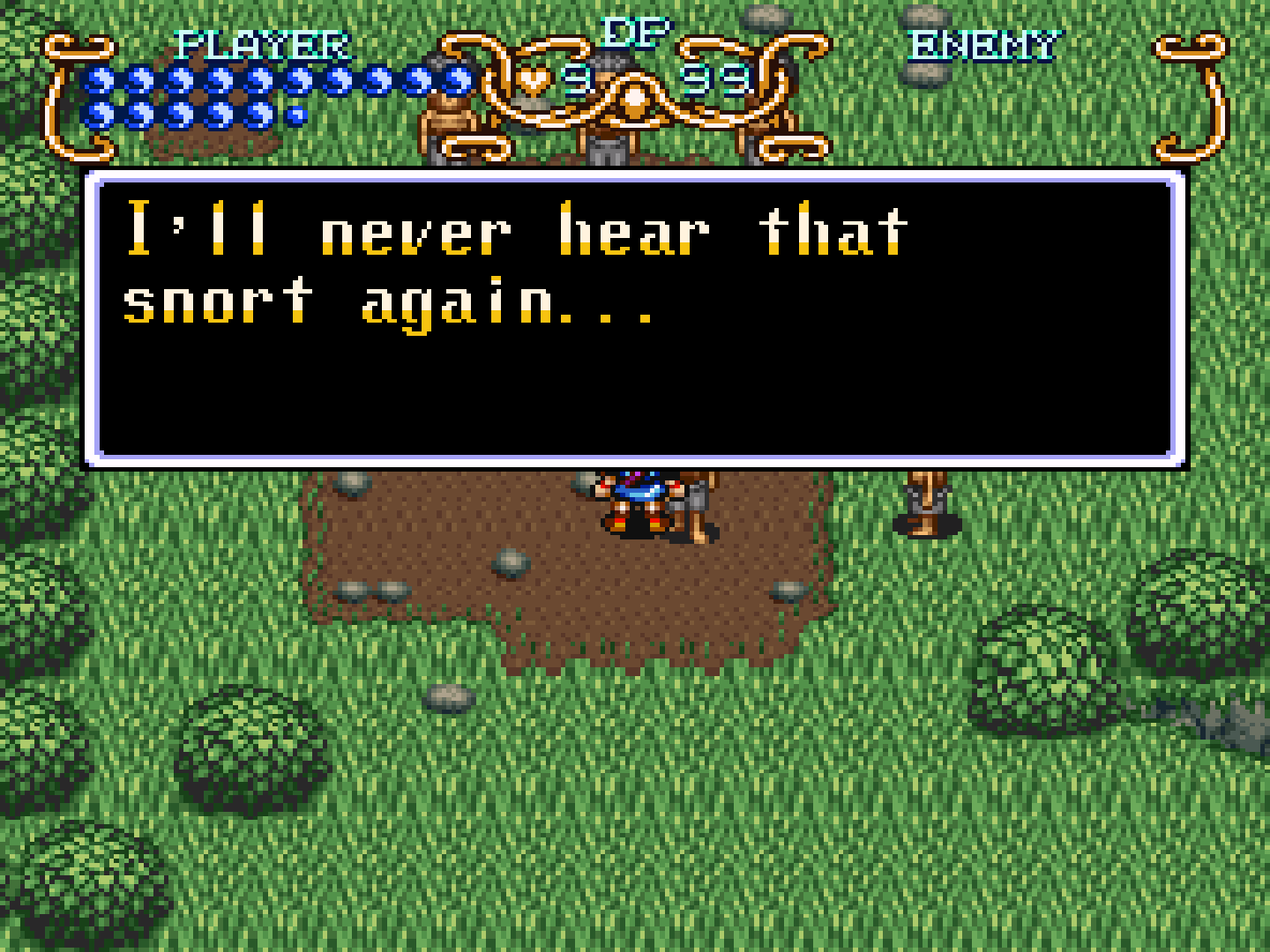 Will: "The air is filled with the aroma of roasting Hamlet."

One of the men offers food for us. I have Will try it. 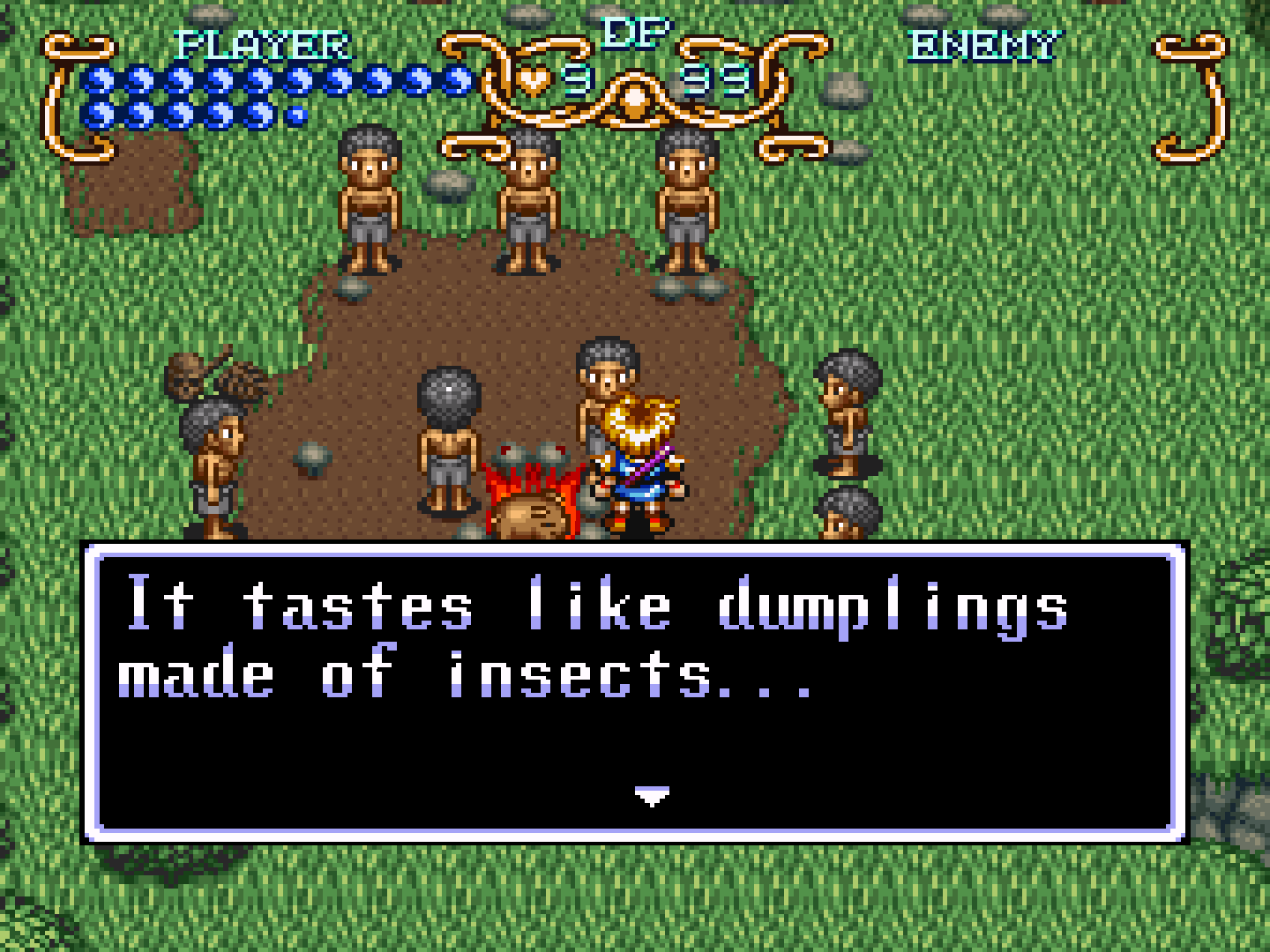 Will: "My heart was filled. It seemed as if we understood each other."

I have Will stare at one of the villagers.

"The man seems to look right into your heart...we don't understand each other's language but a seed has sprouted..." I wonder if he sensed that we knew Sam and his brothers?

One of the boys wants to lead us somewhere. But not yet.

I save before I talk to the first boy.

The first boy draws our next location on the map: Angkor Wat!

My PS3 controller's out of power now, so I use the keyboard.

The boy wants to take us to the temple. He senses that we need the Mystic Statue there.

Talking to the second boy, he leads us to a nearby skeleton... 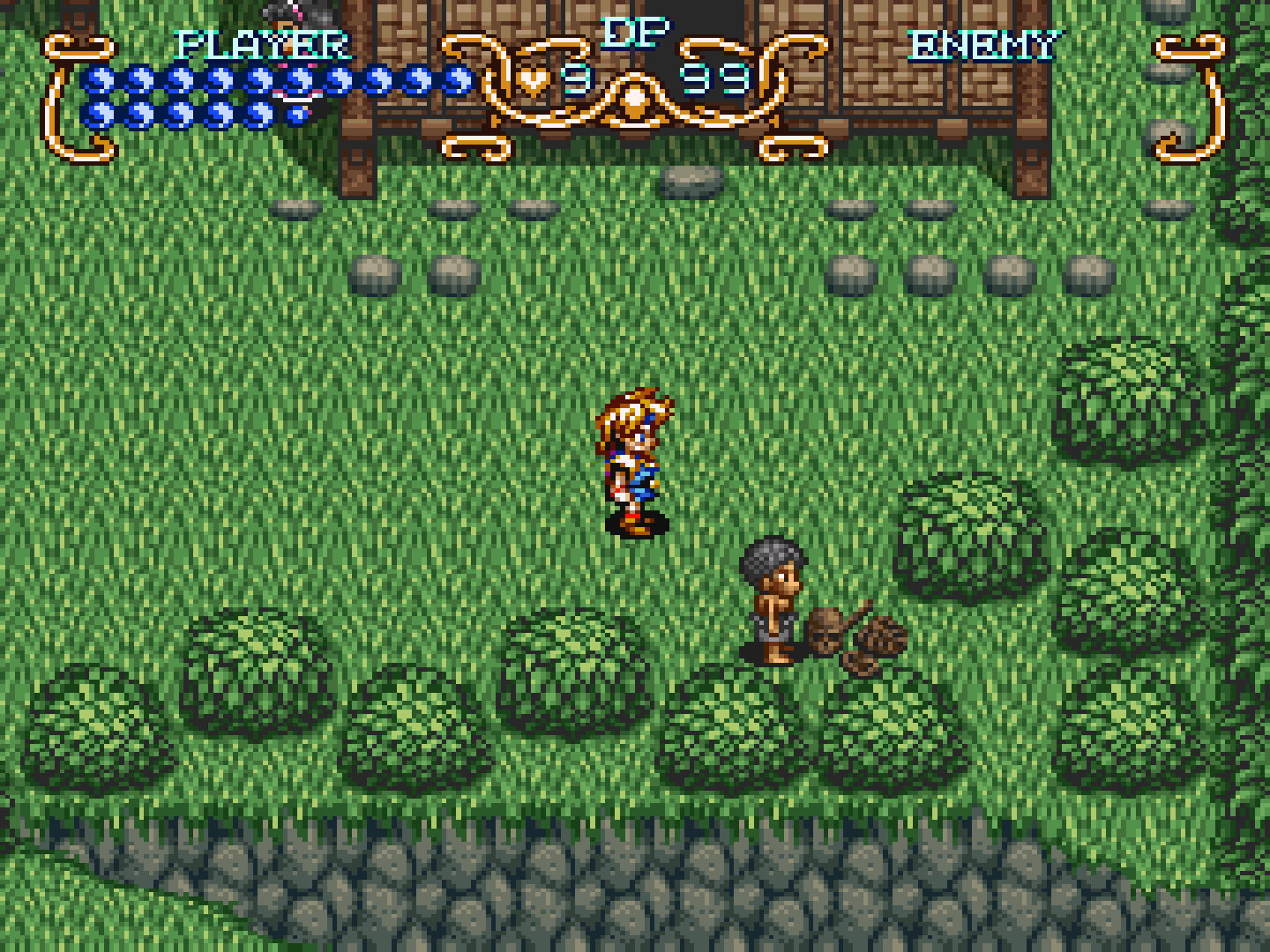 I'm guessing that's his father, or a friend.

It is someone he knew, and he starts crying... 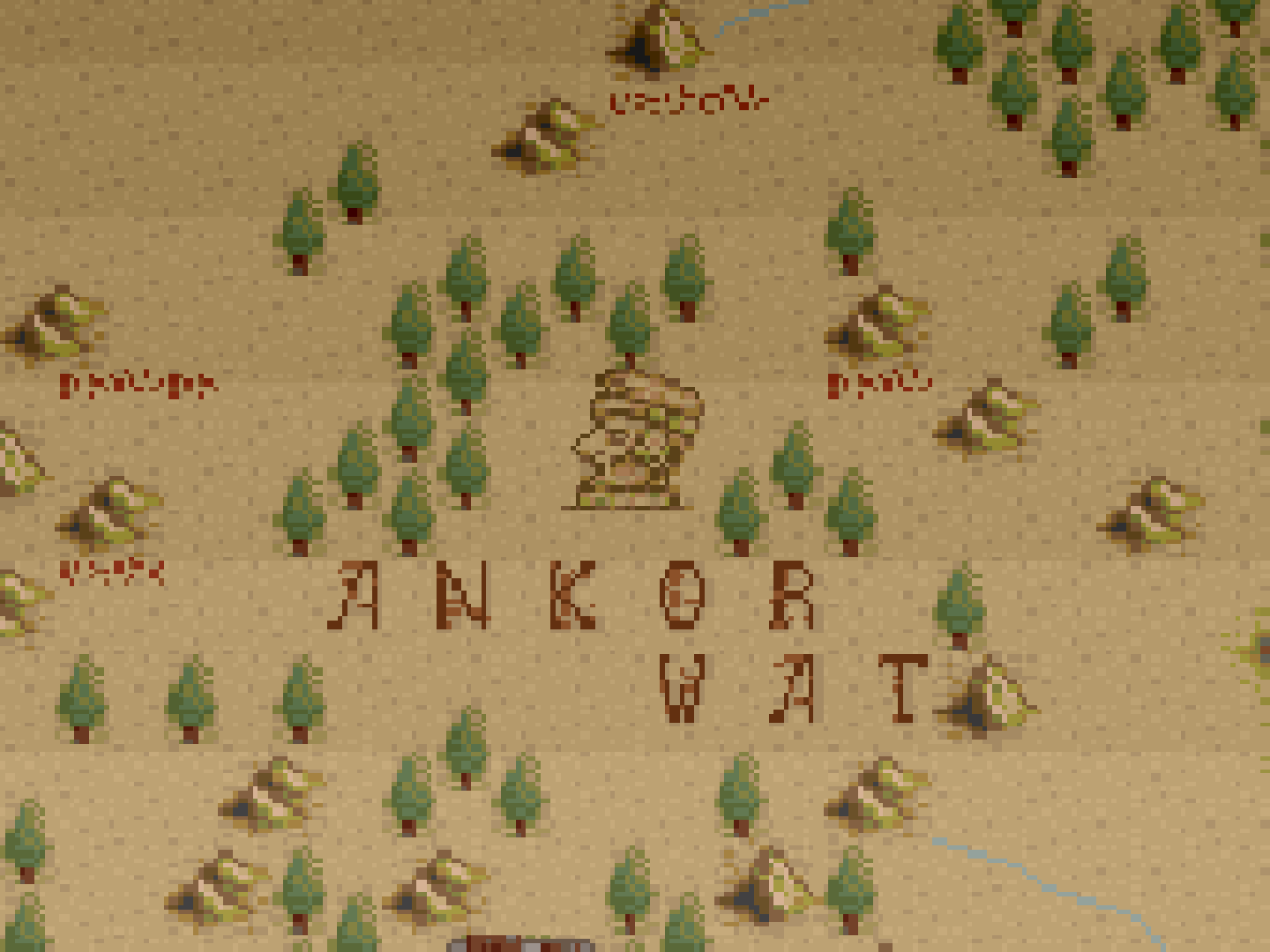 We appear before the gates of the temple. The place has scattered shrubbery around... 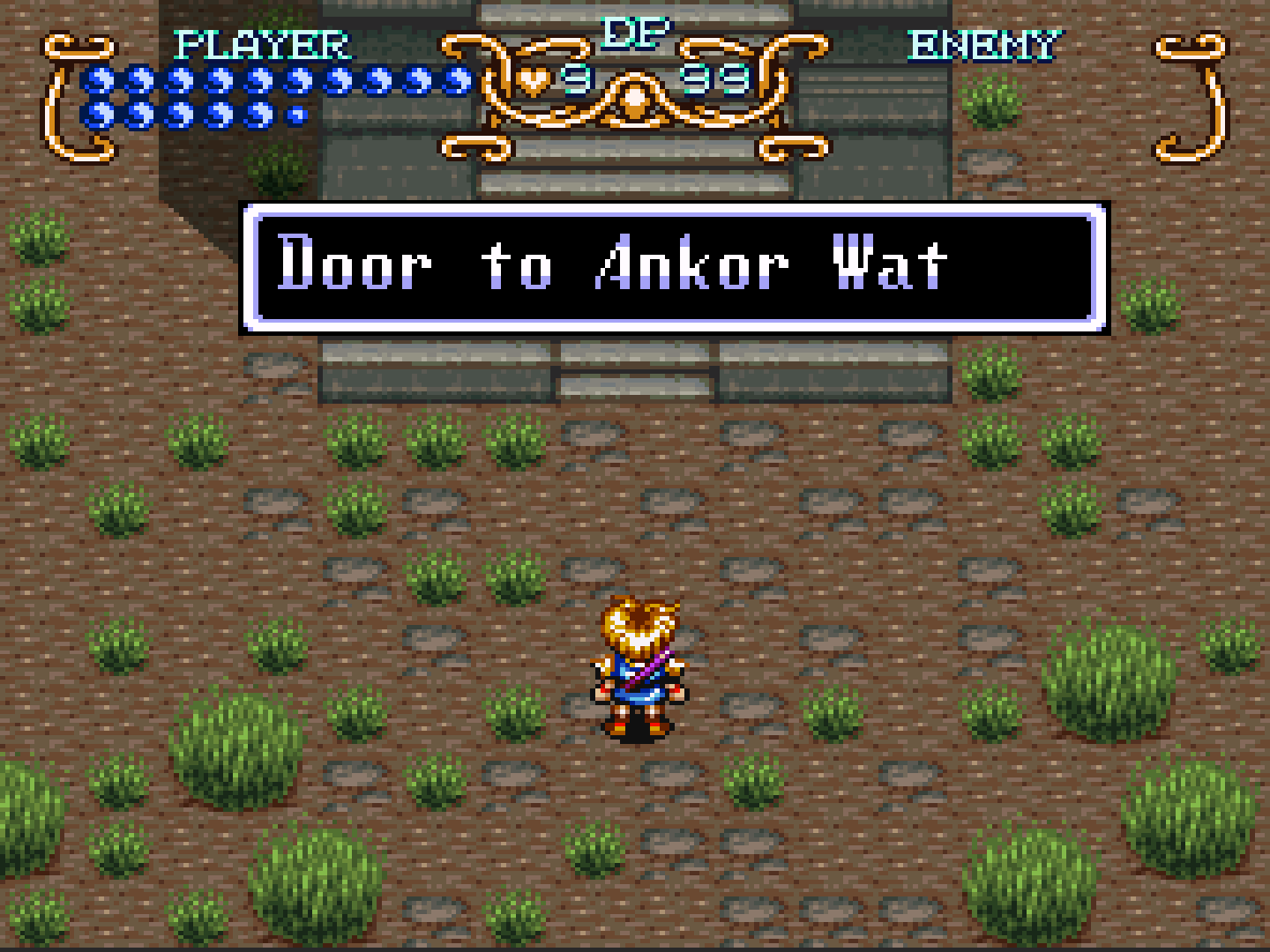 Will: "Through the jungle, three days journey from the native village, there is a huge temple."

We survey around the perimeter, and see a bush crawling superfast!

Knowing it's an enemy, I have Will take care of it!

Next enemies are a fly, and an invincible colossus strongman with a long, extendable neck!

There's more enemies around the outside of the temple!

I figure out how to beat the colossus! After taking out the head when it's stretched, their weak point, a big eye, is exposed! They run in fright afterwards!

The decor of the overhang here looks a bit intricate. 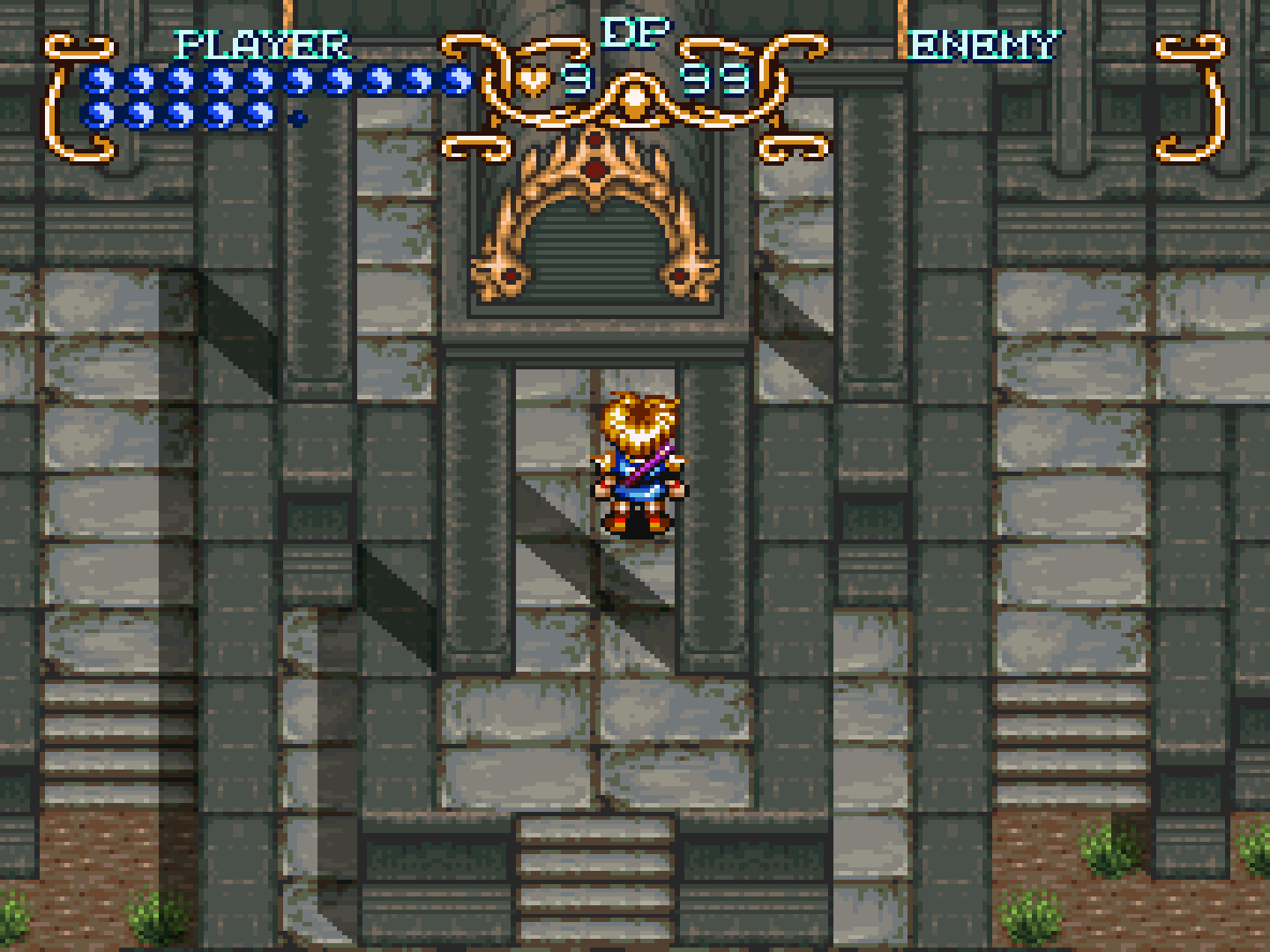 We explore around the outside a bit more, and take care of the remaining enemies here.

It turns out the colossi's "heads" are their mouths, and those mouths remind me of Xenomorphs for some reason...eeee...

Inside Angkor Wat proper, where a new tune plays. 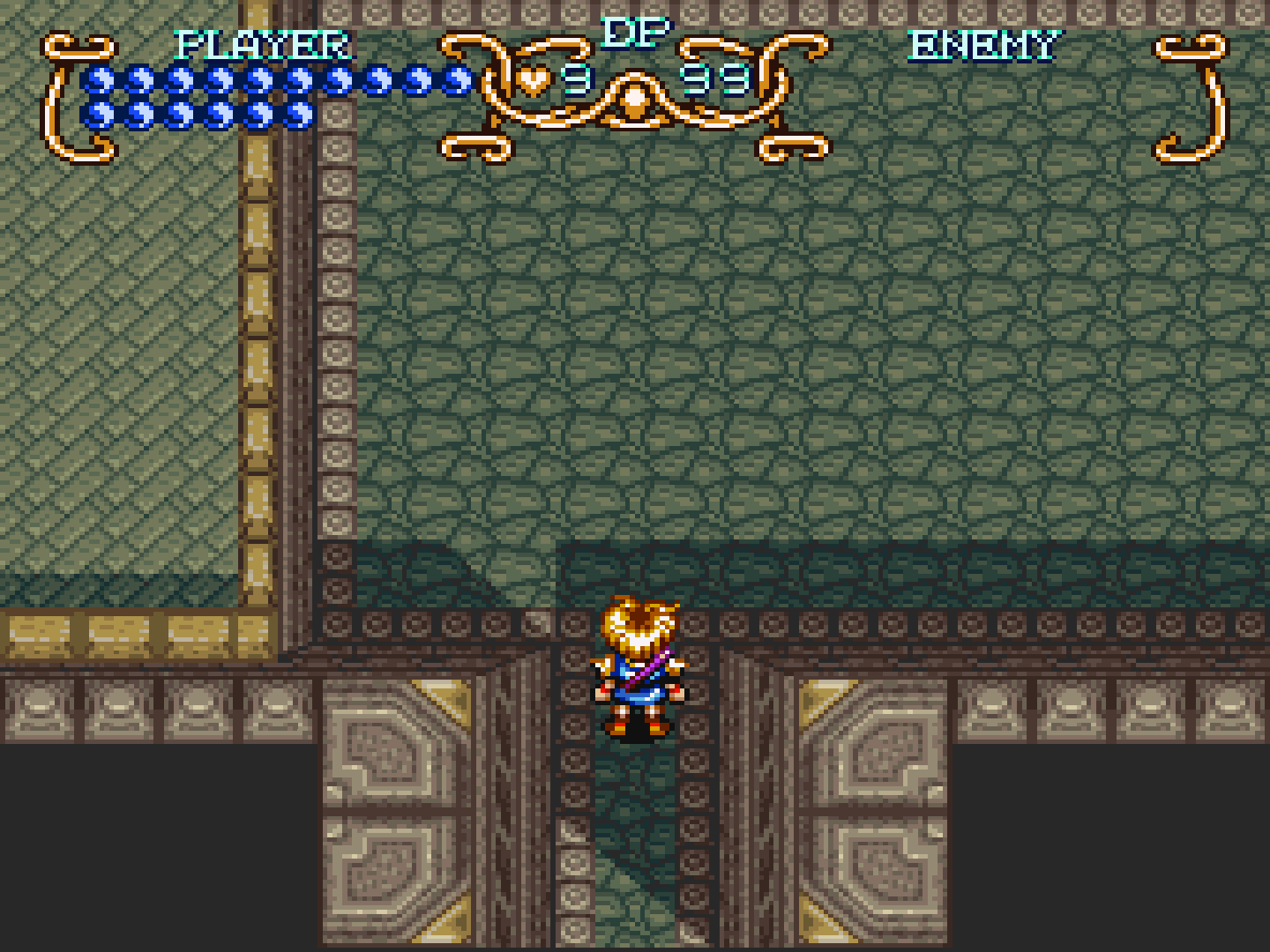 We're at the Outside Passage...

The first enemy we encounter is a disembodied head that can split into two, and are invincible when they do so...the quick ones are always the hardest to take care of...

Heading east, a pair of stones form a stone giant that can swing their arms in a circle... 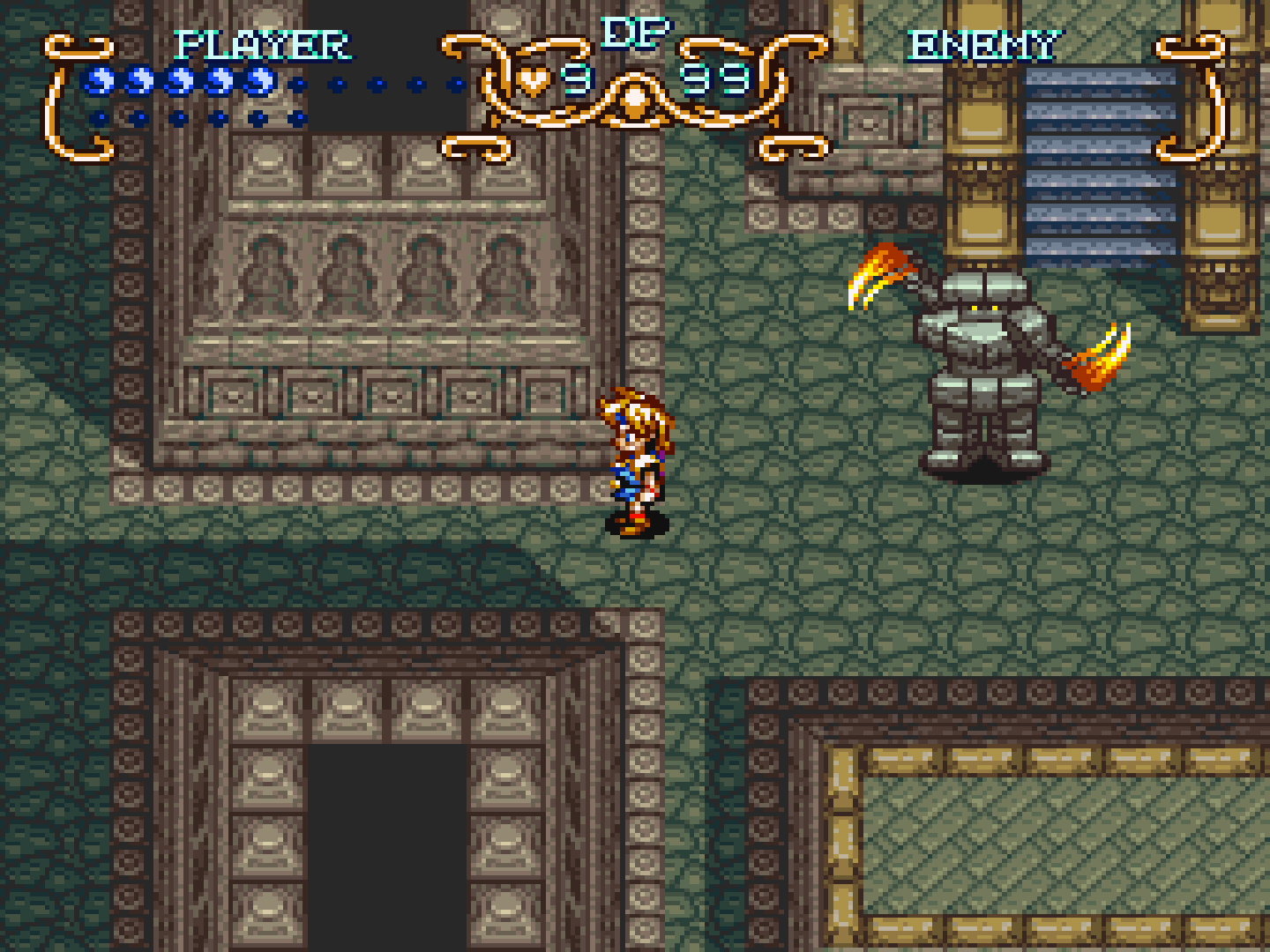 They're invincible when they perform this attack, but they're easy to take care of.

Avoiding another floating temple head, I spot a chest, which has a Red Jewel inside!

A sentinel on the wall is also one of the new enemies here! 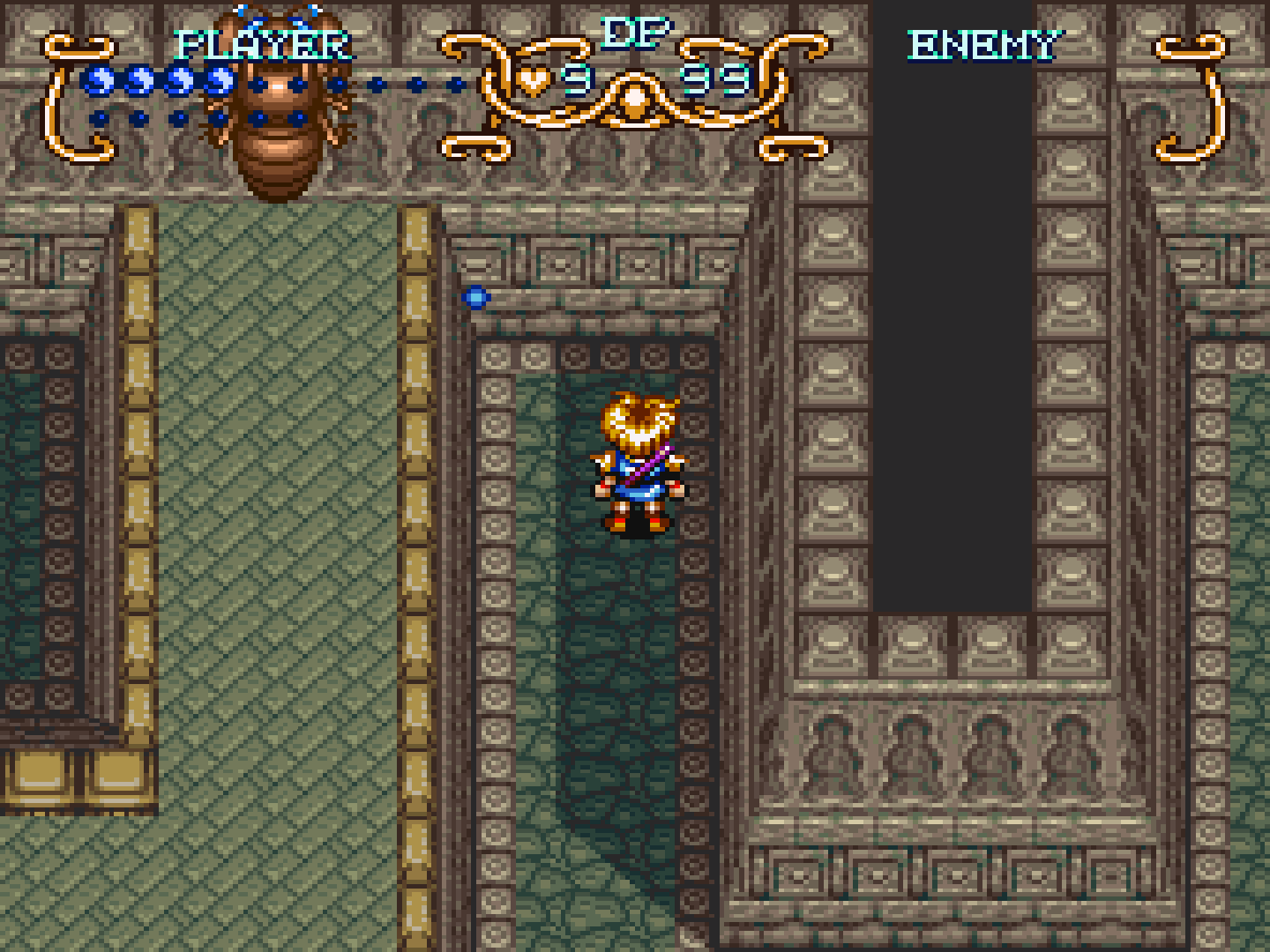 Low on health, I return to the village to save.

The village music is now the same music I heard in both Angel and Lilly's Village.

It's a miracle I survived Angkor Wat so far! And without using the controller!