Our stats show we have 20 strength and defense! 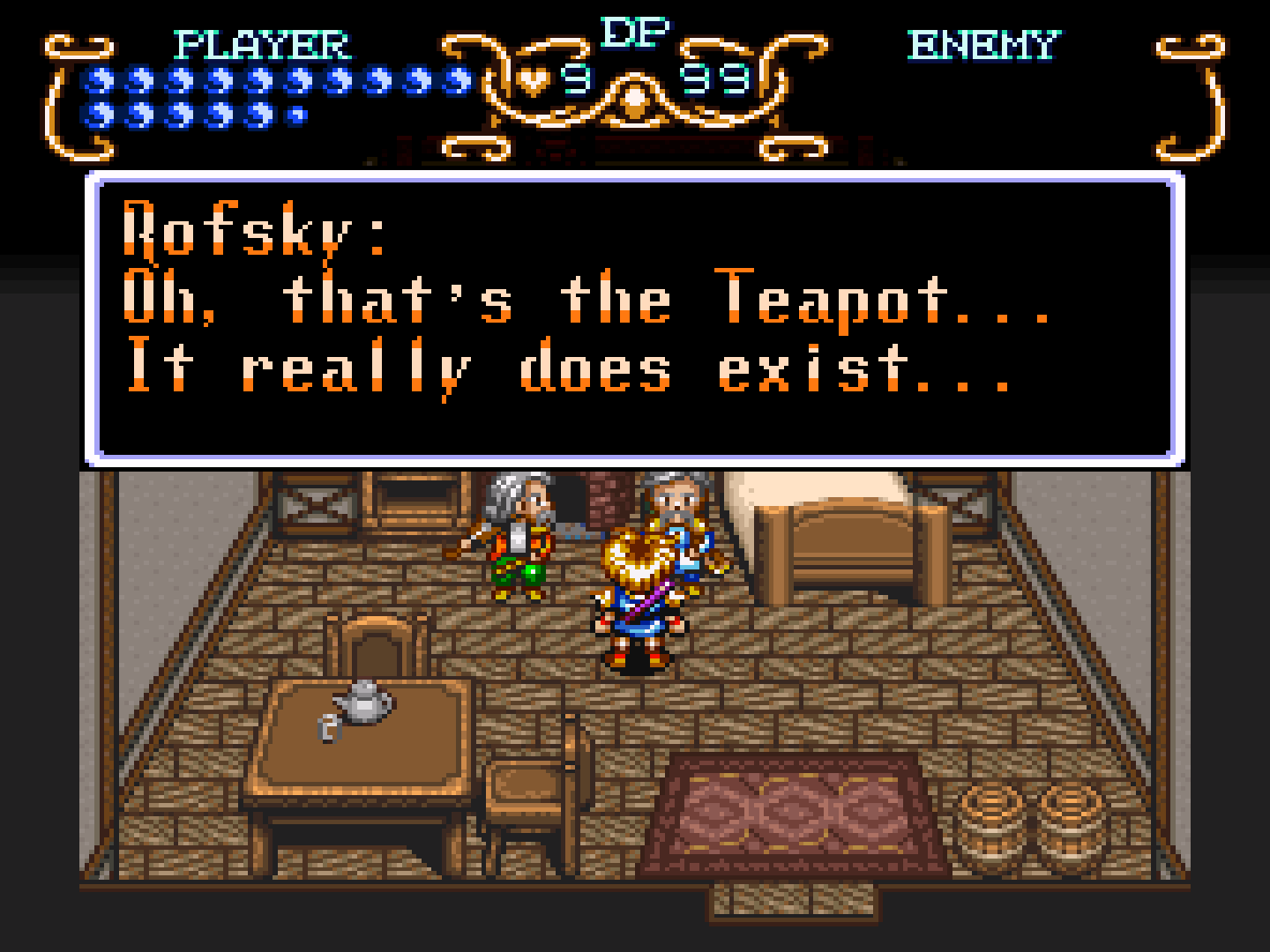 ...but Erasquez's mind is elsewhere to somewhere more serious... 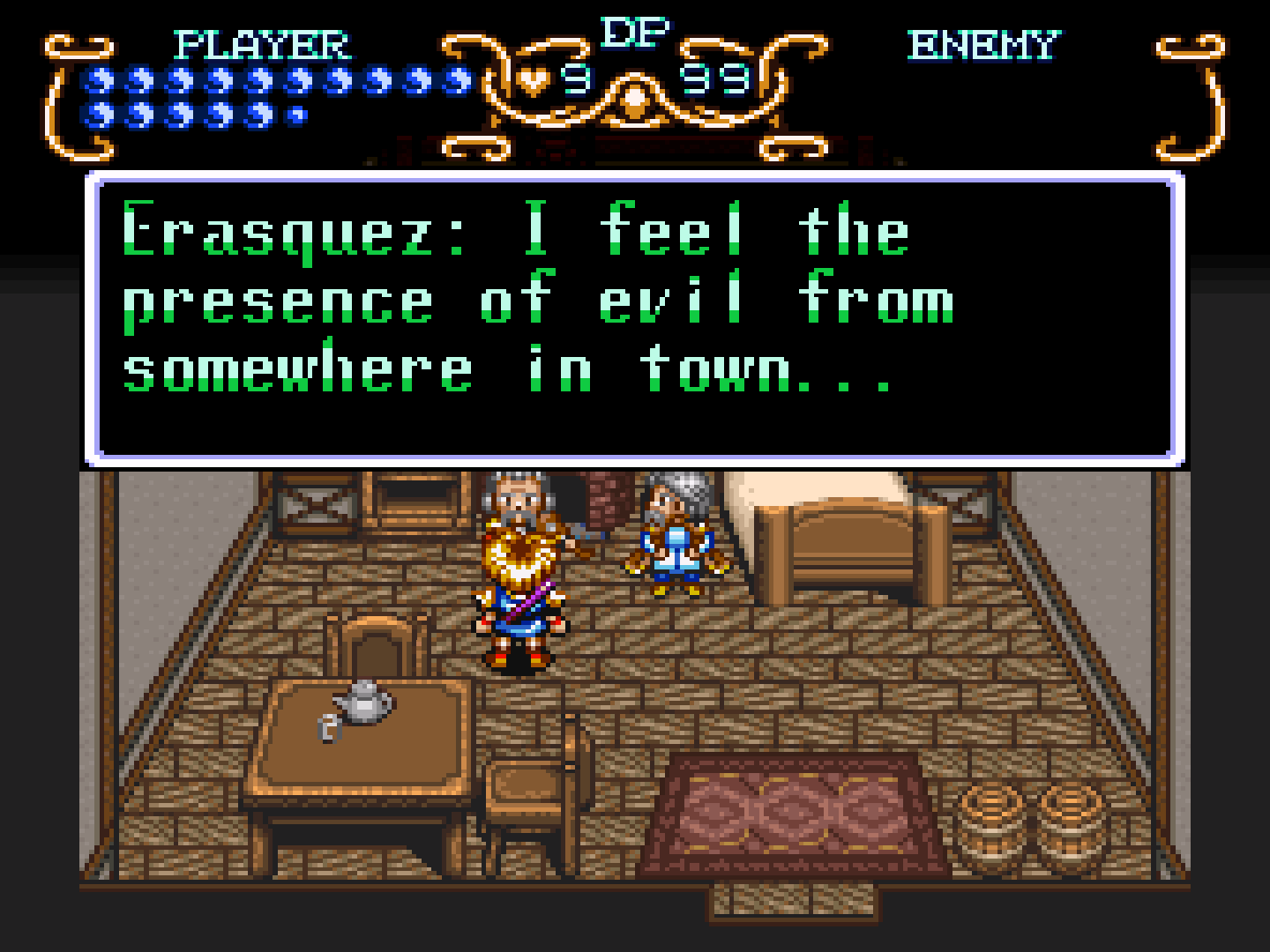 Oh no, is the Jackal already here?

Erasquez: "Maybe the townspeople have changed into demons. It may be someone in the town square, or one of your friends. Use the Teapot on anyone you suspect." Hmmm...

I do a little investigating. I start at the Rolek offices.

The Teapot doesn't seem to react.

We search the merchants' row for any signs...nothing.

I go inside the manor.

I use the Teapot on Neil's younger sister. Nothing either.

The Teapot senses nothing on Erik and Kara too.

I use the Teapot on Neil's mother. 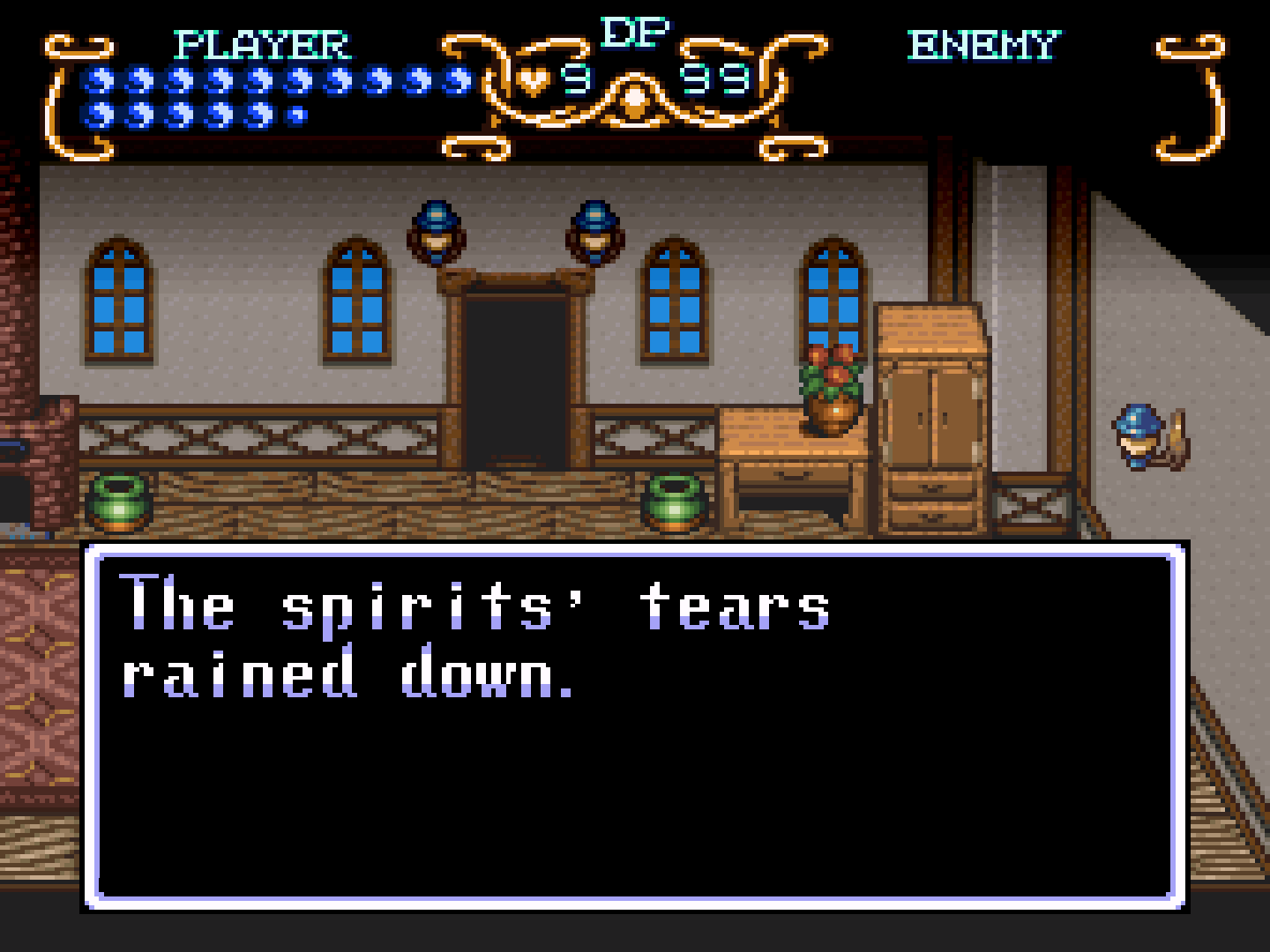 What's going to happen next? 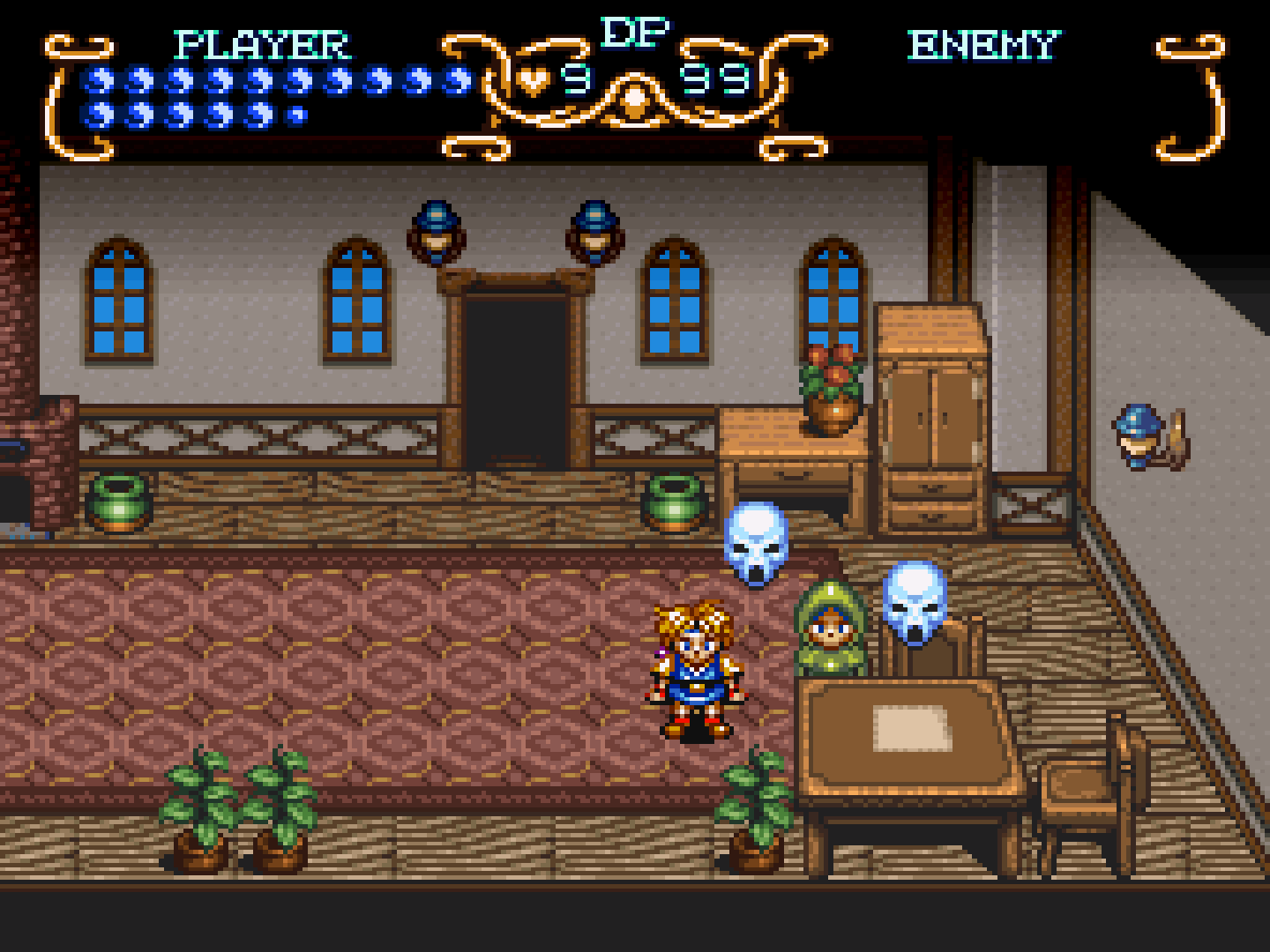 The Moon Tribe spirit laughs their usual laugh, warning us about what's to come... 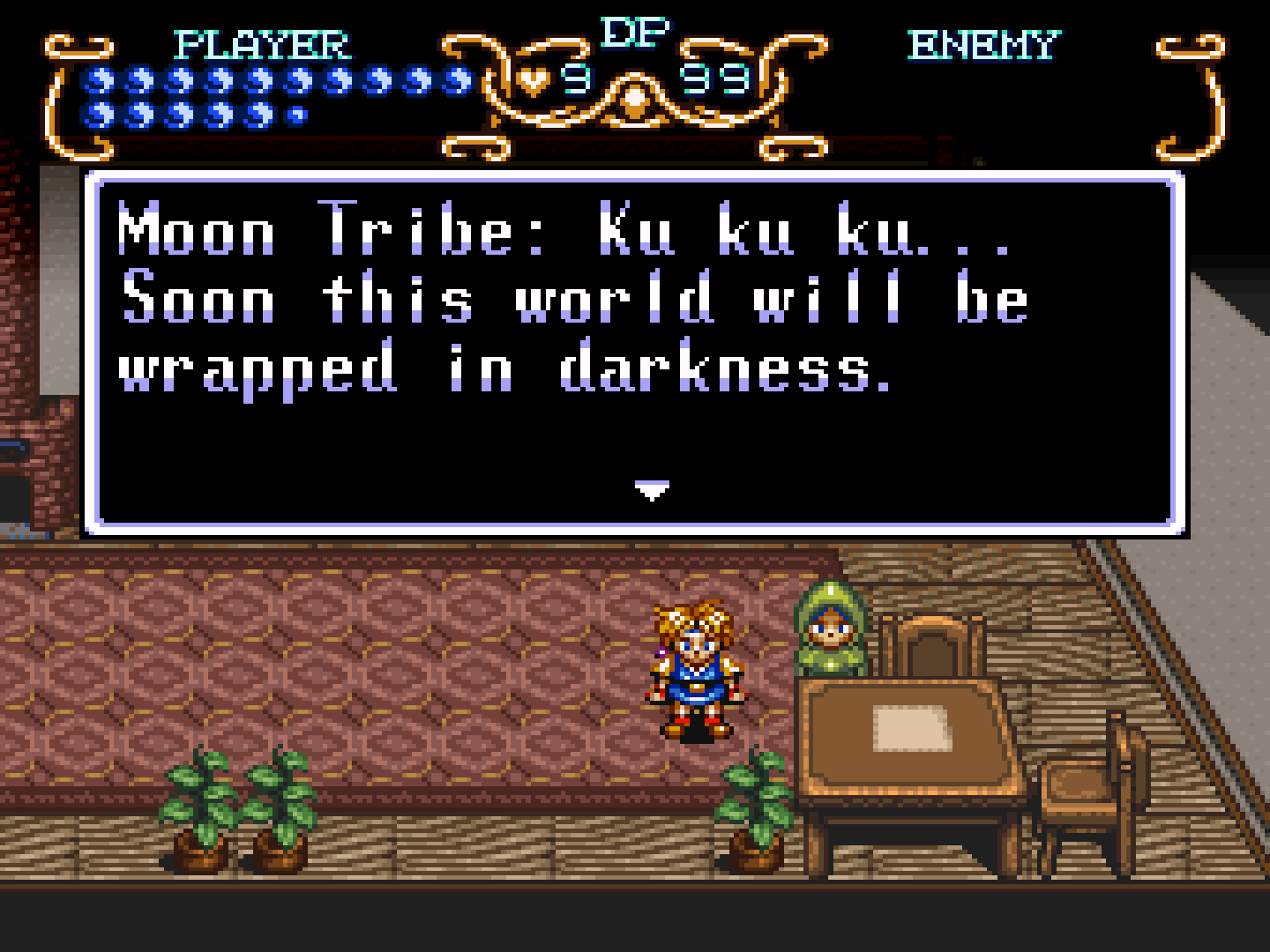 Moon Tribe: "The previous owner of this body is now a sleeping skeleton under the shrine." What!?

So Neil's parents are...

I talk to Neil. 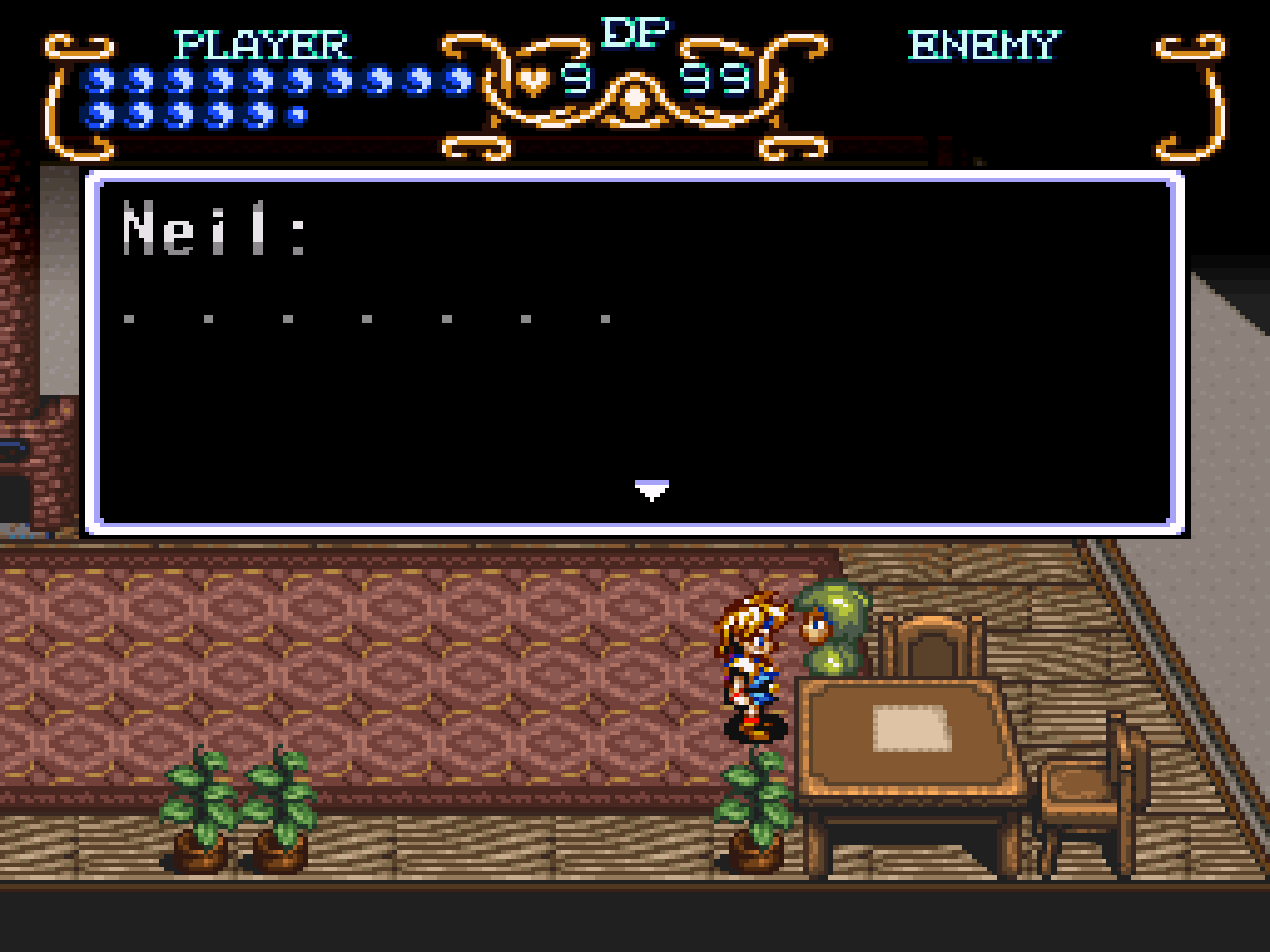 Neil's now having regrets about leaving his family at this point. 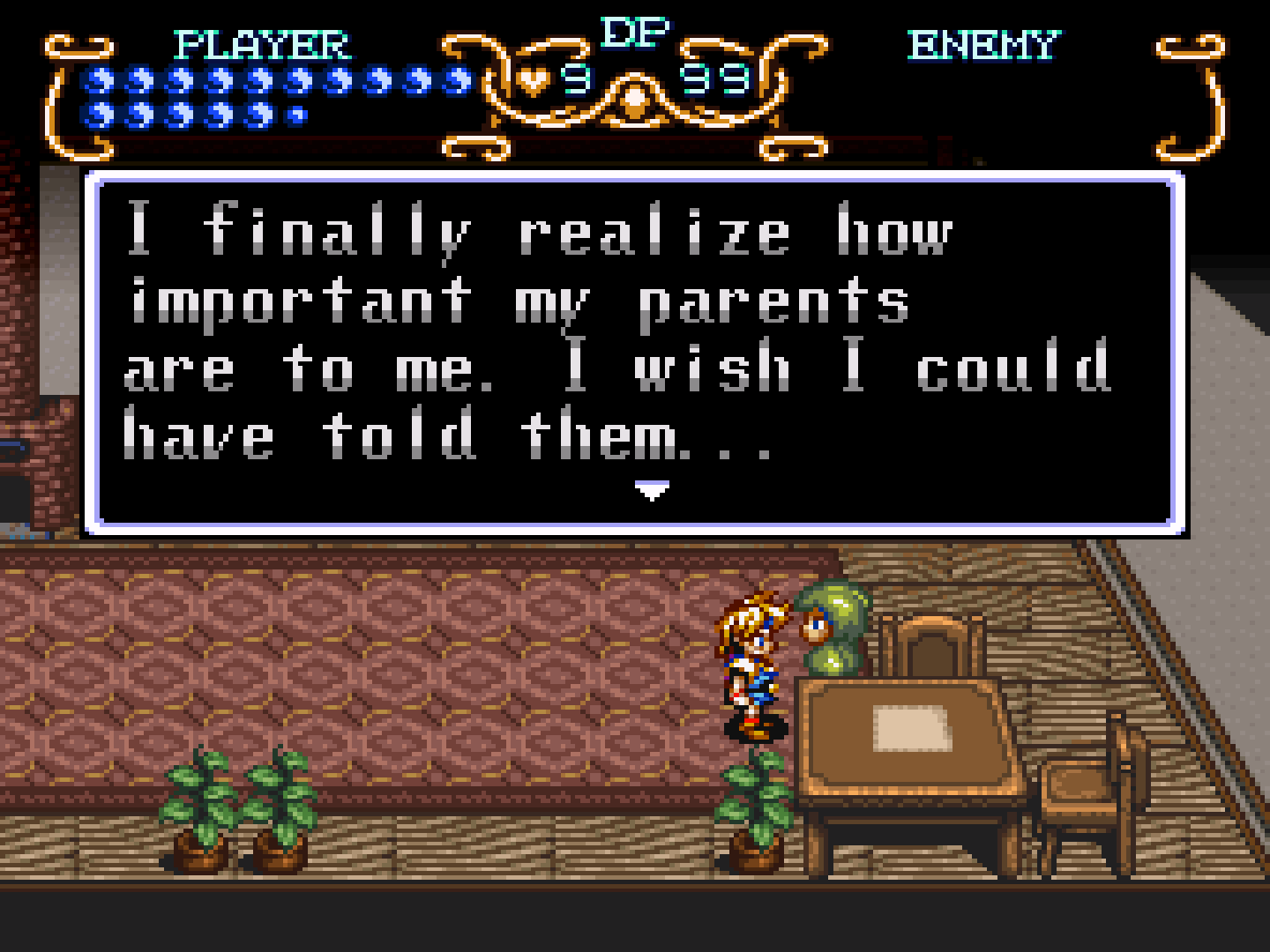 Neil tells Will to let him be alone...

Will feels "ashamed" and disappointed in him. 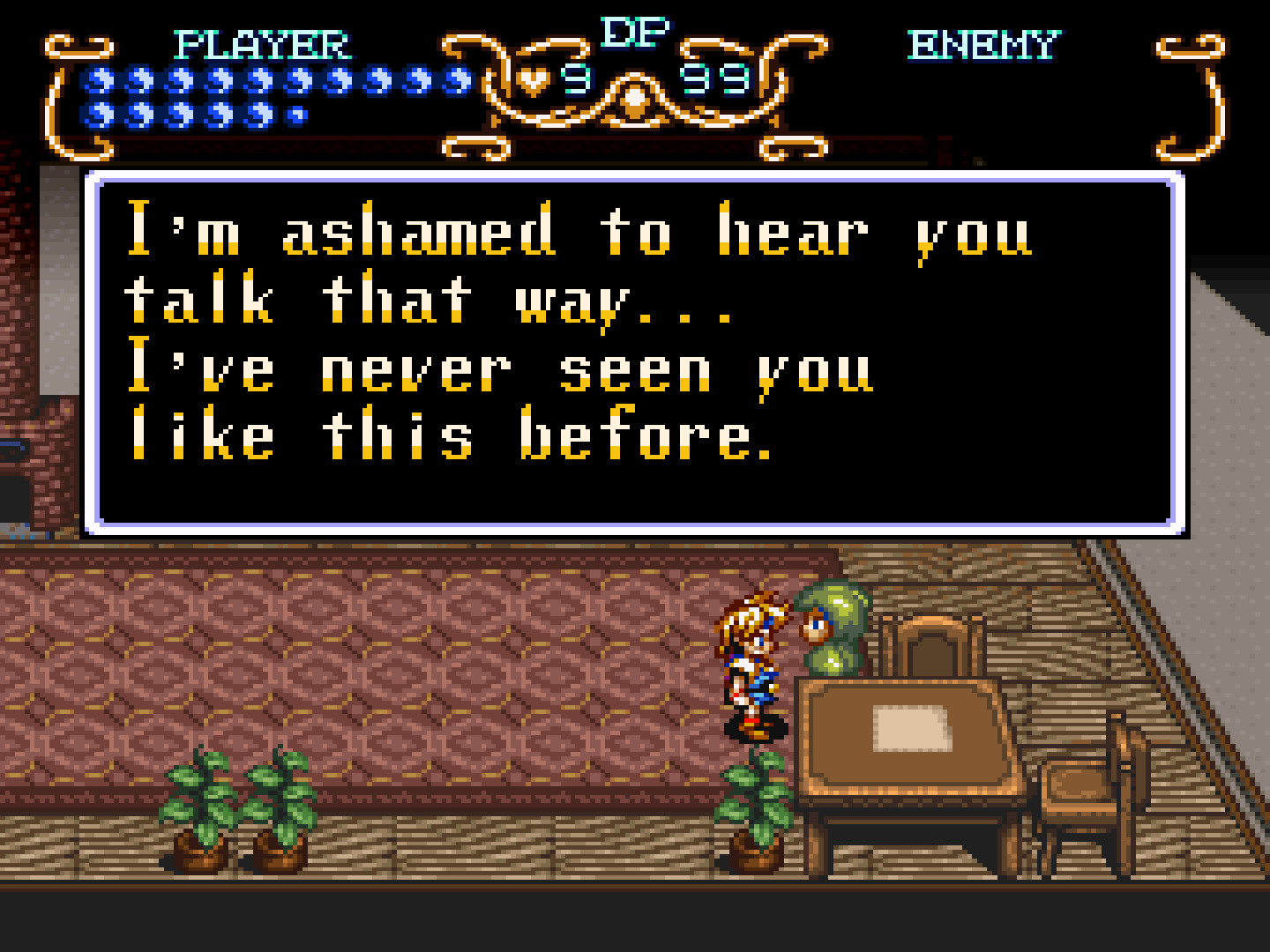 Will: "The next morning...disappointment awaits..."

Neil apologizes for what happened yesterday.

Neil makes a huge life decision at this point. 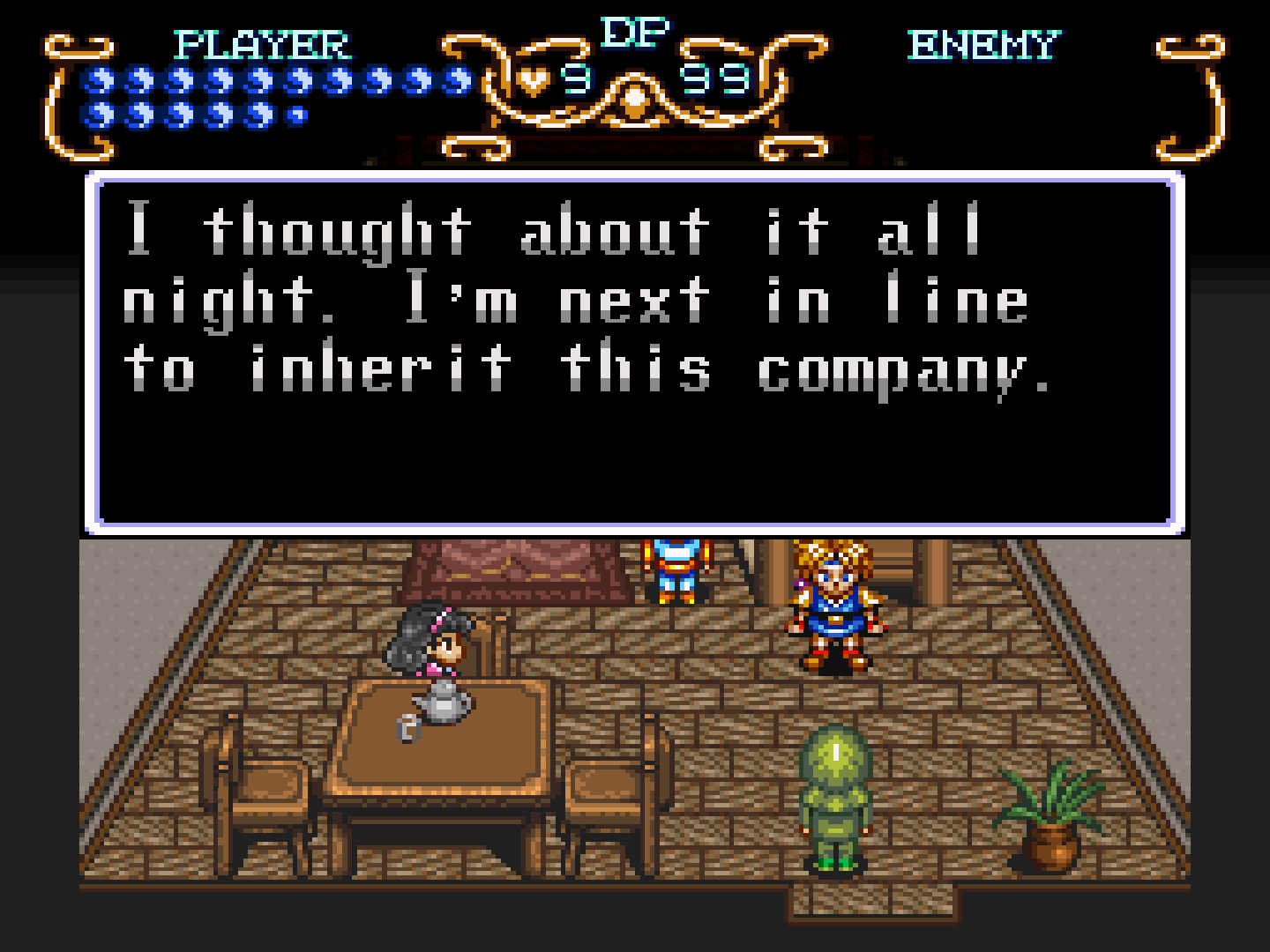 Neil: "If I want to stop the labor trade, I have to change the company that started it..." Yes! Do so! 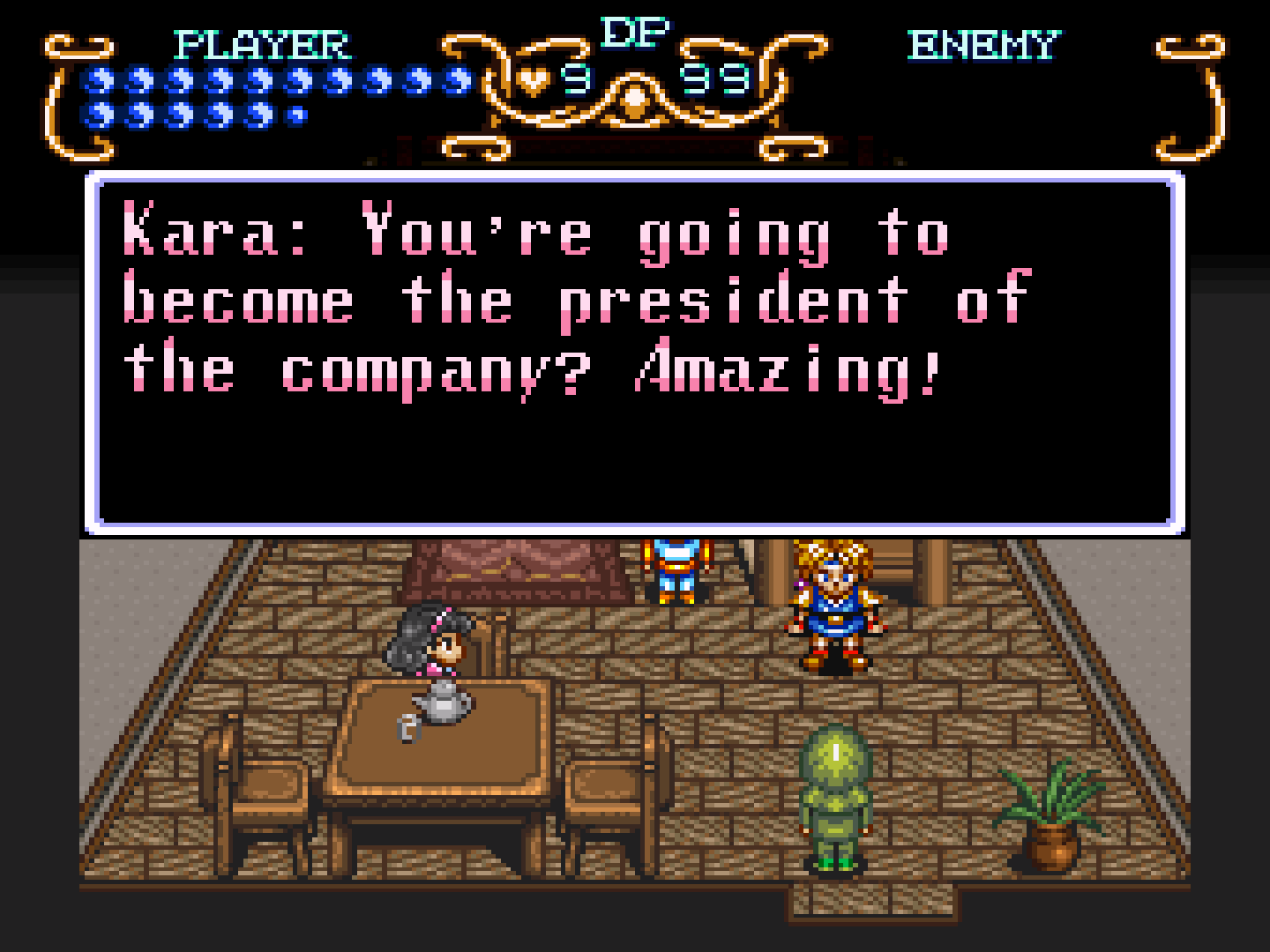 Neil, for the first time, blushes... 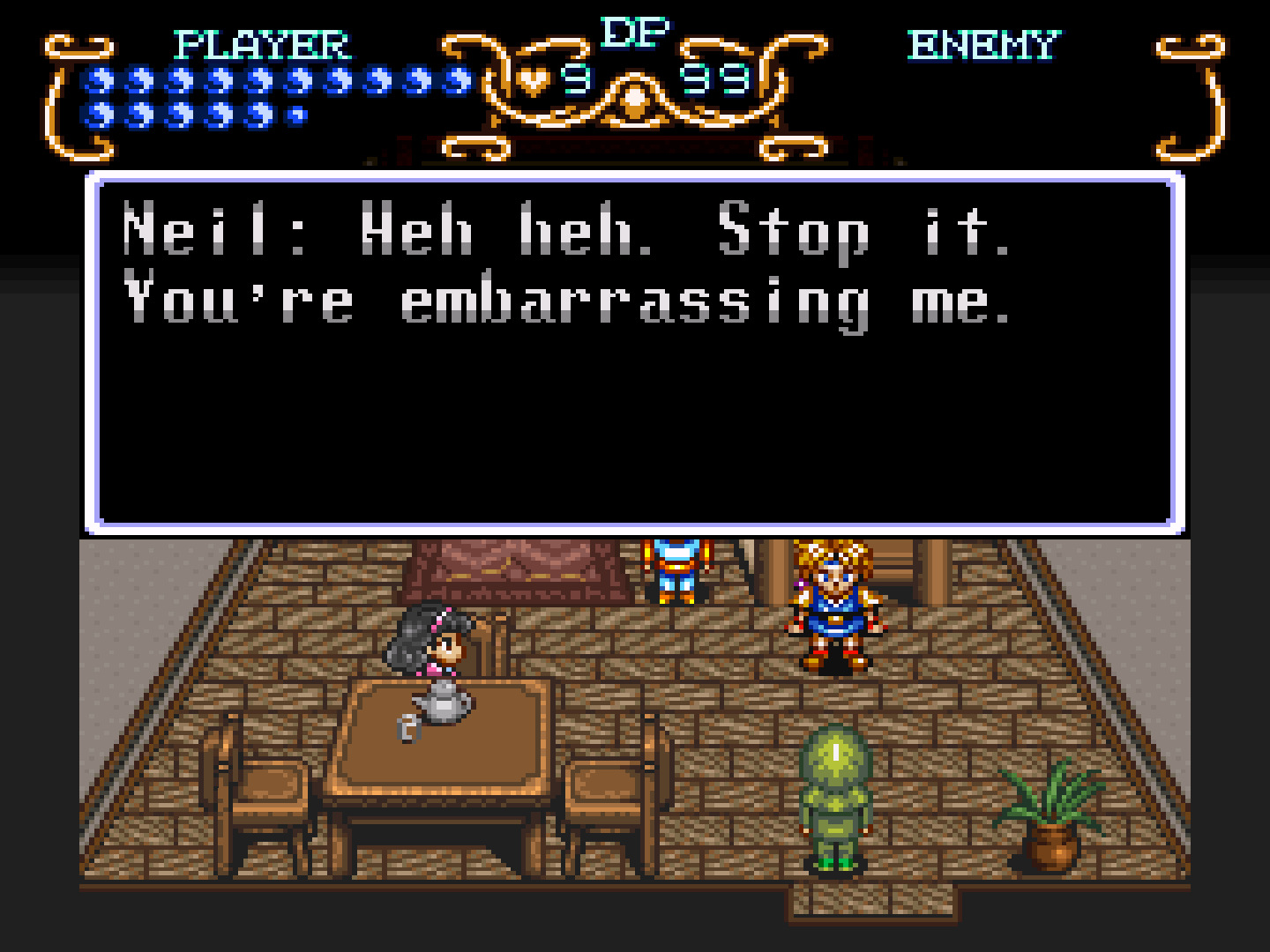 But, Neil's next words are not so jolly. By the way the text is now printing each letter instead of showing it immediately, and that the regal music has ceased, it's serious.

Oh no, Neil, you're not turning her over to him!

She knows who he's talking about!

Neil lets him in. He is turning her over... 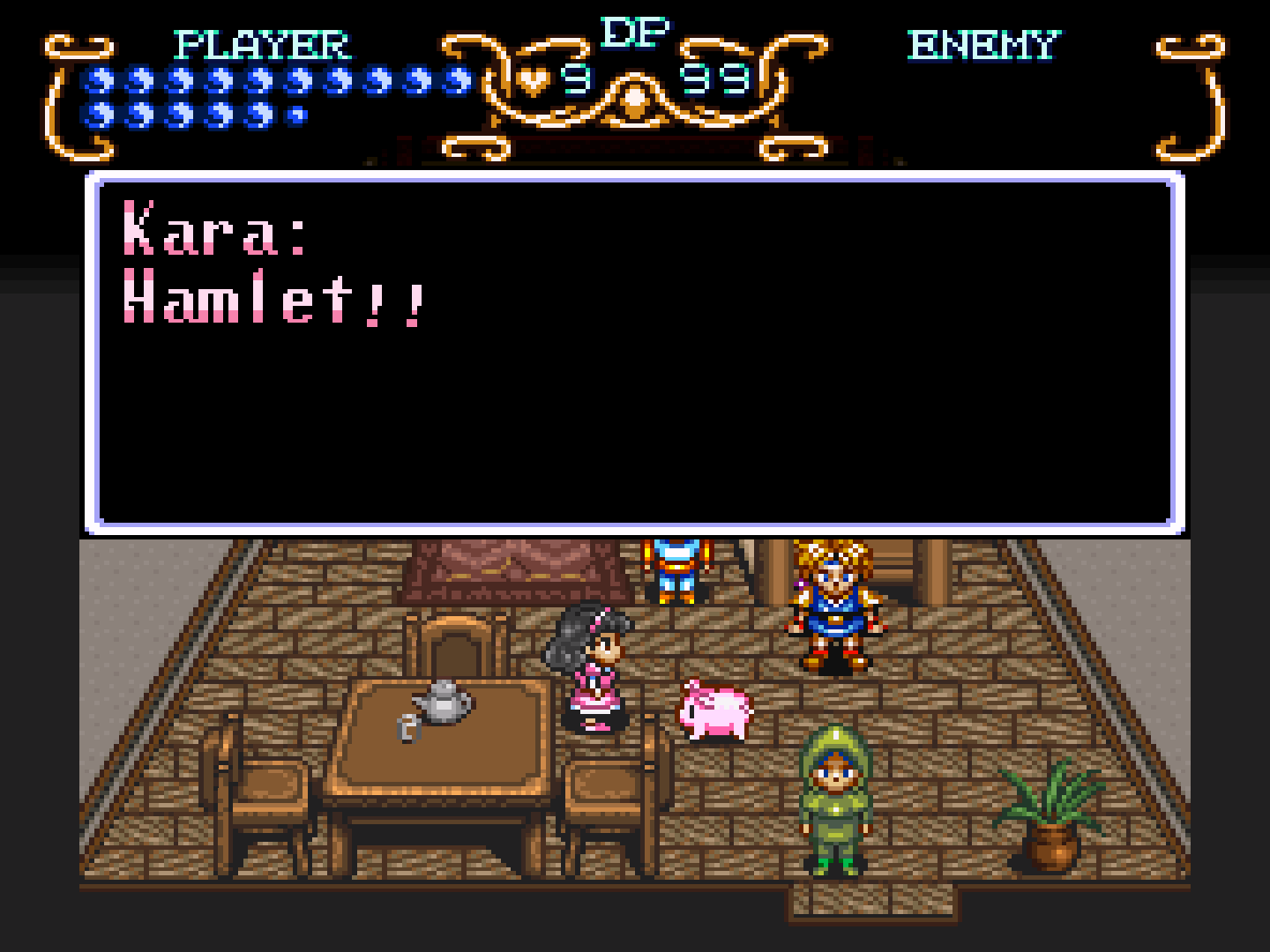 I almost forgot about Hamlet! How did this little pig reach Kara?

Kara's worried about him.

Neil: "Ha ha. He's come all this way looking for you. Lilly found him in Watermia and sent him by Rolek's Delivery Service." 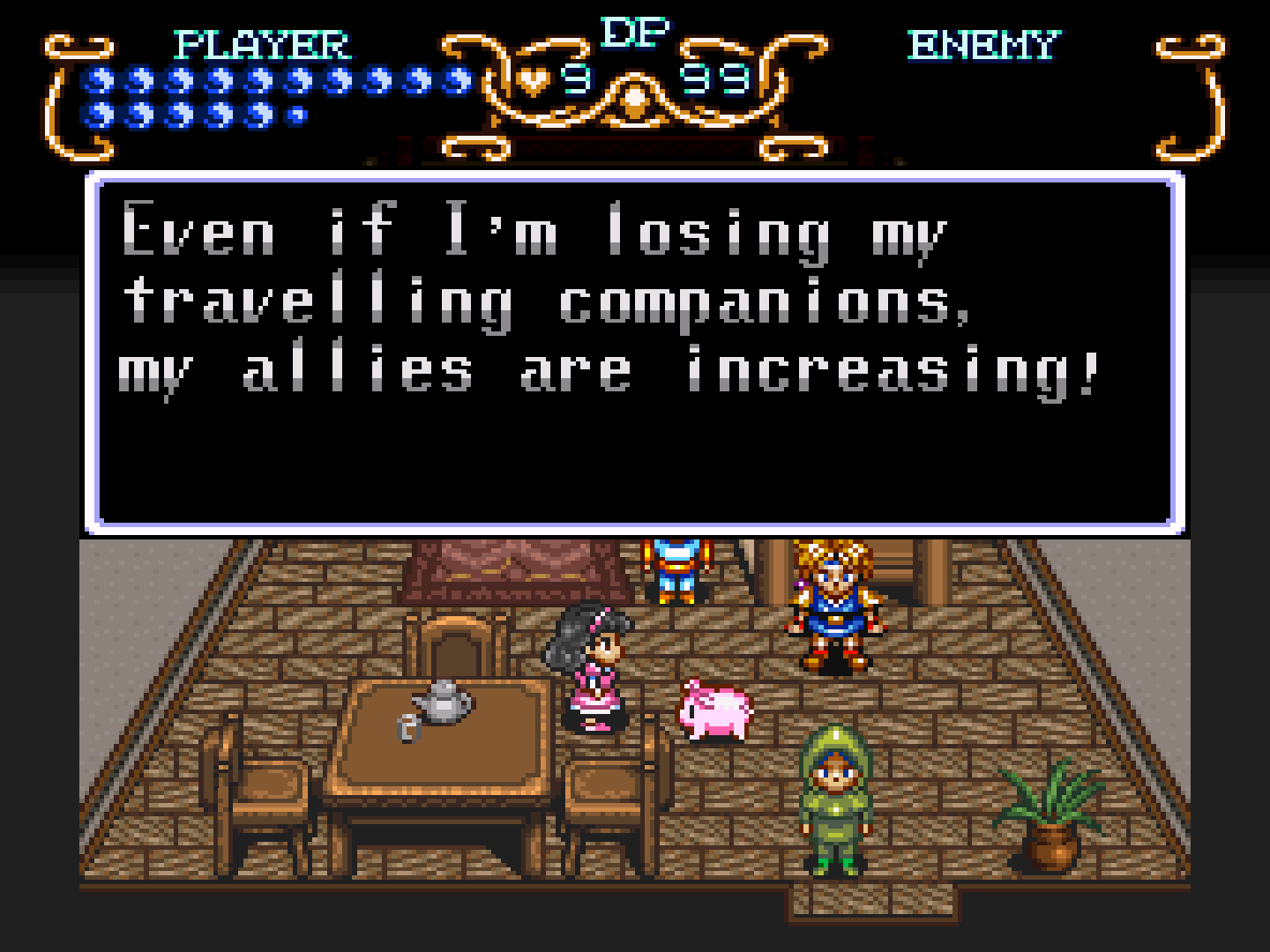 So that means Neil is staying in Euro to look after the family business. We're going to miss you and your insight, Neil. You were too cool for this game...

Kara gives us our next destination. 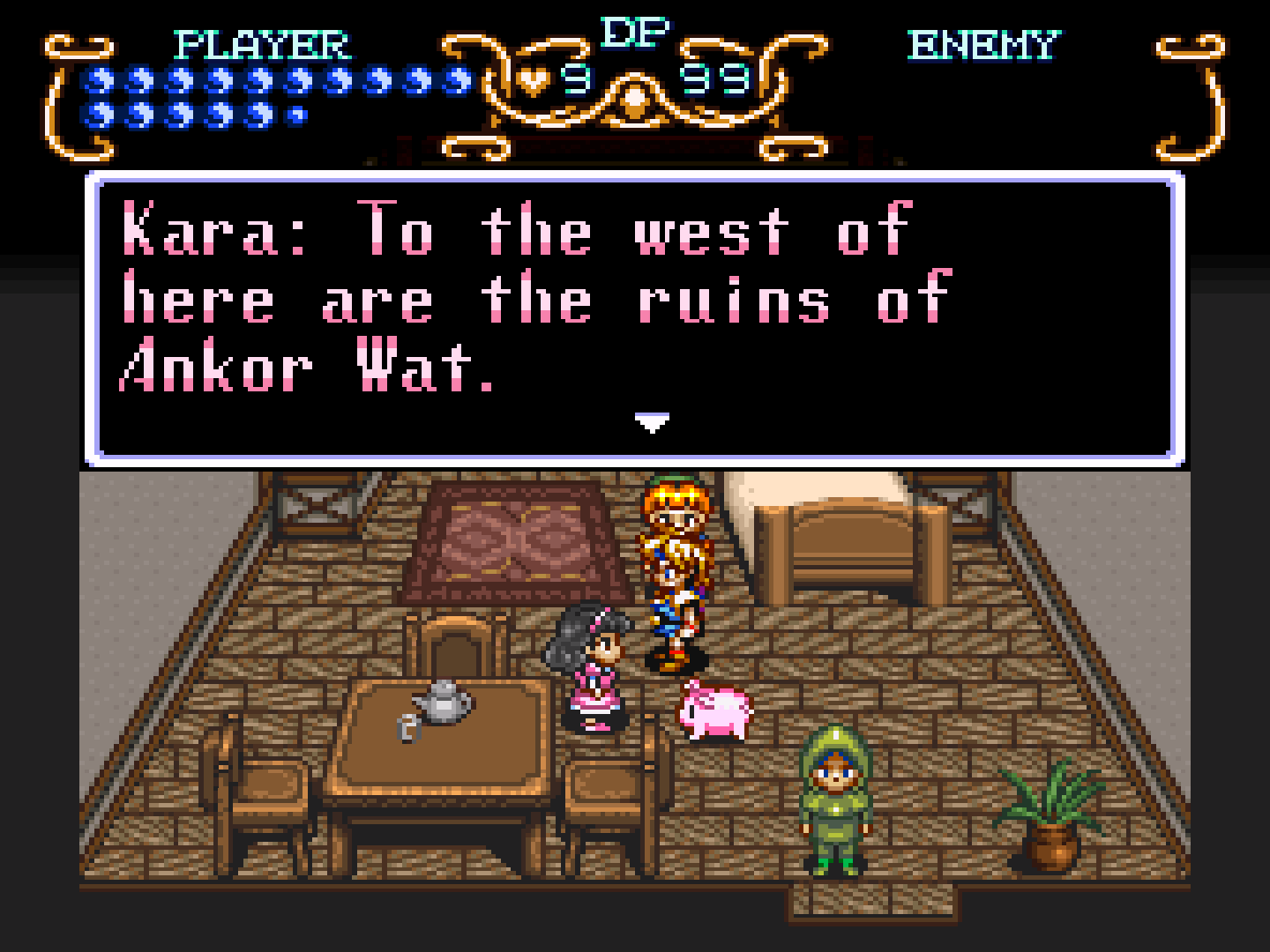 Kara: "That's where the laborer's home is located. Let's go!"

Since I accidentally skipped over what Will said before Neil came in, I reset the game, and replay the scene over. I save after Neil lets Hamlet in.

That was close! For a second there, I thought Neil was going to have Kara be sent back to her parents... *shudders*

I wonder how Kara knew of Angkor Wat?