Crossing the plant stalk bridge up to the north passage, where more enemies are on the prowl!

My DP is almost reaching its maximum. I wonder what will happen if we have 999...

I end up clearing half the enemies in this area before going southeast, since there's no way to move forward here. 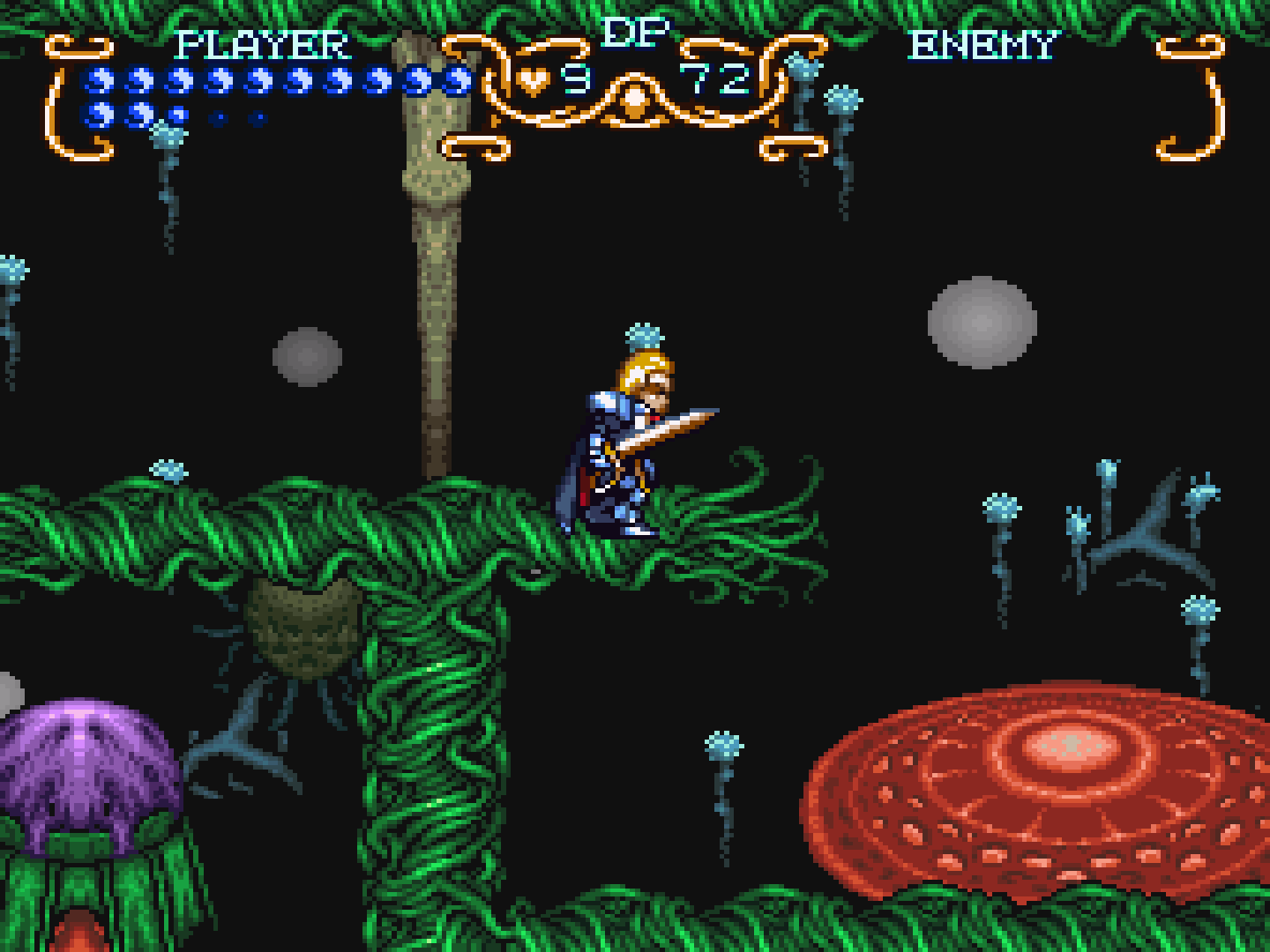 The next area is a den filled with numerous red caps, and fire-summoning flute players... 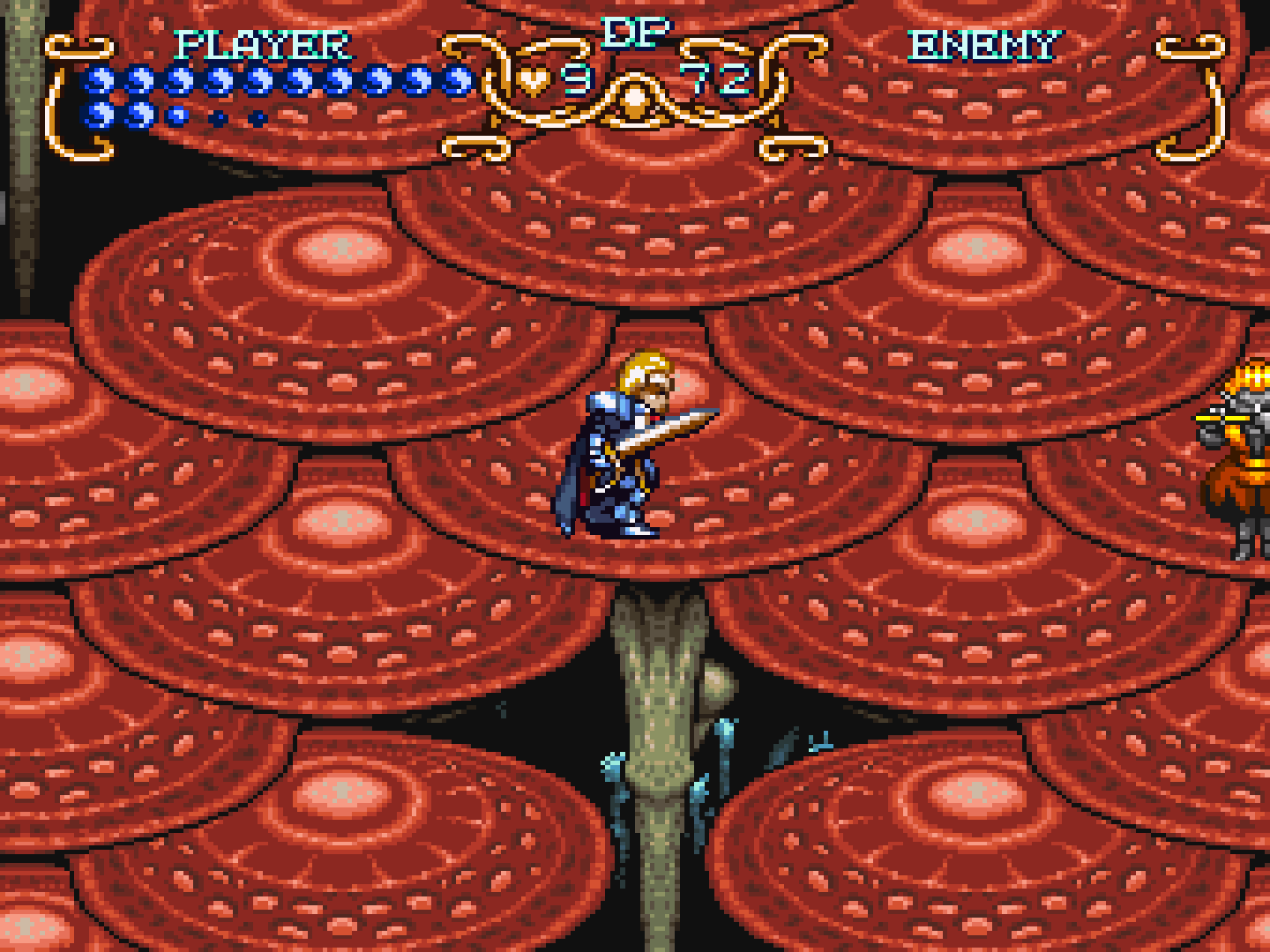 Before crossing, I take care of a row of golden floating skulls with Freedan's superpowered Dark Friar.

There's a chest and an enemy on the northwest side of this area, but they're unreachable for now.

After stepping over a few red caps, I finally make it to that area, and get more Mushroom Drops!

I clean up the area, which has a fire summoner and a trio of spiders remaining.

I go back to the plant stalk in the previous area and use the drops! 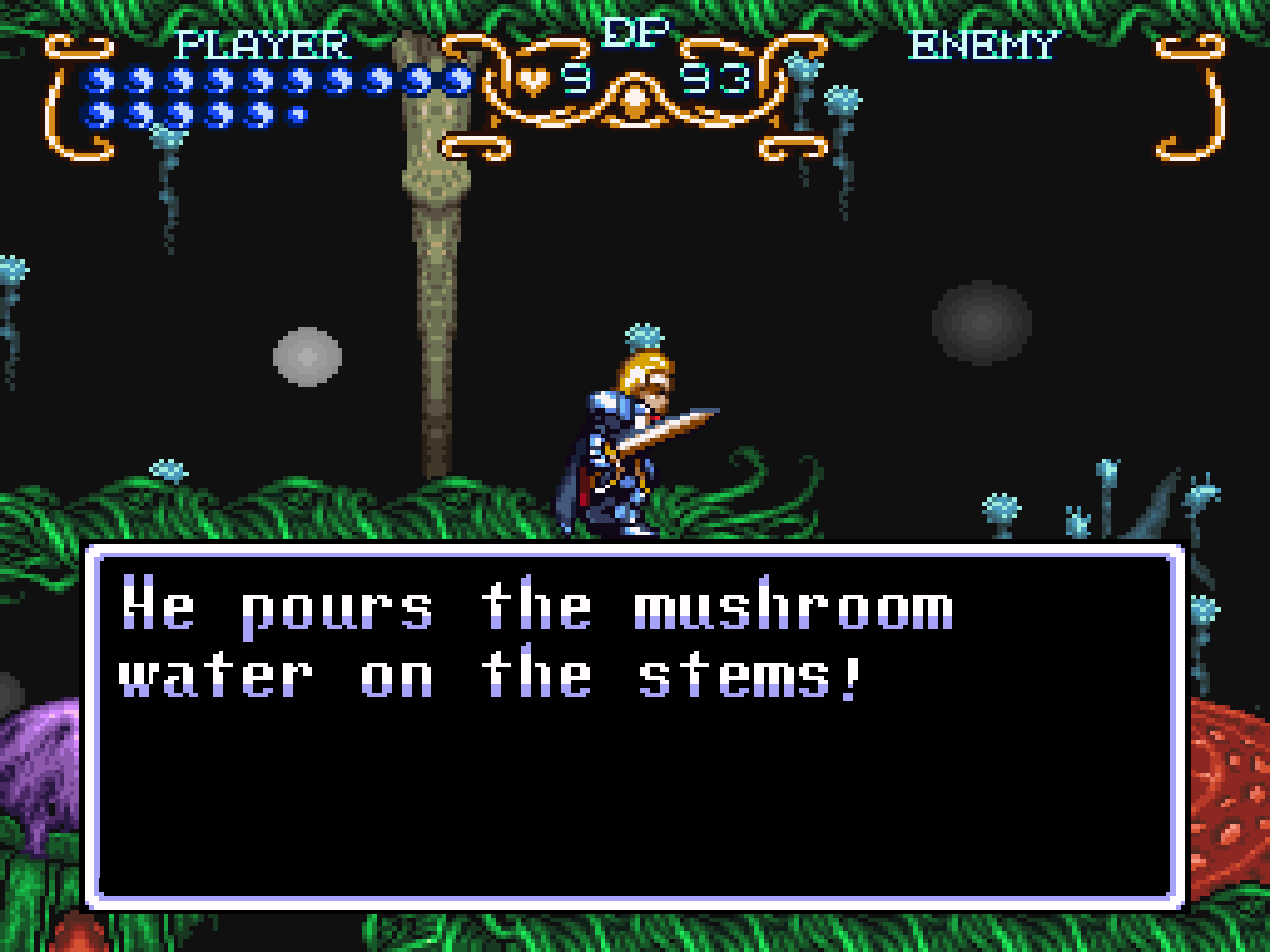 There's still some unreachable parts in this area. I have Freedan take to the east passage after recovering at Dark Space. 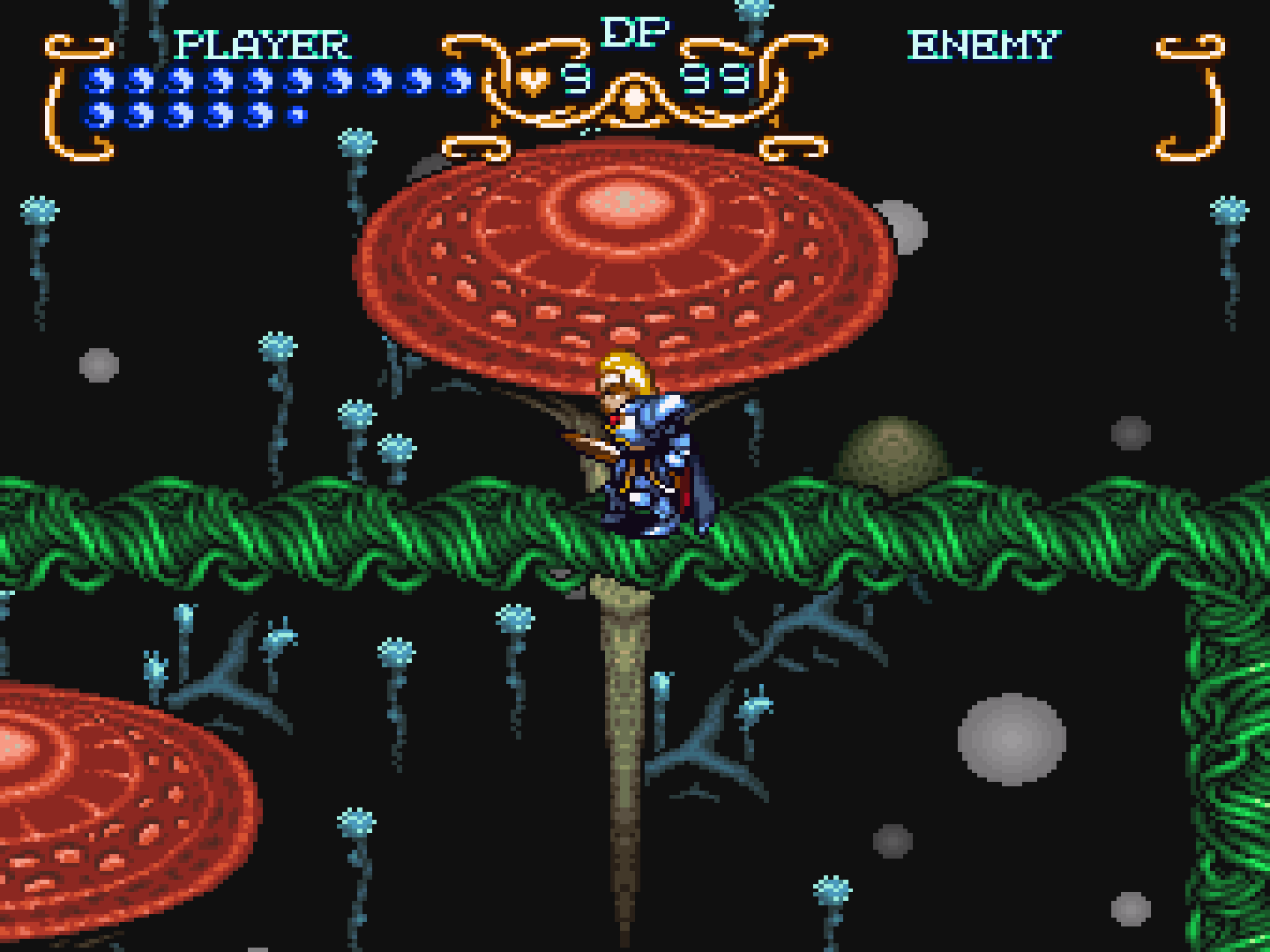 It takes a few tries, but we manage to aim the Dark Friar true.

After taking care of the last of the spiders near another Dark Space portal, we win a strength boost!

I save again and transform back into Will. 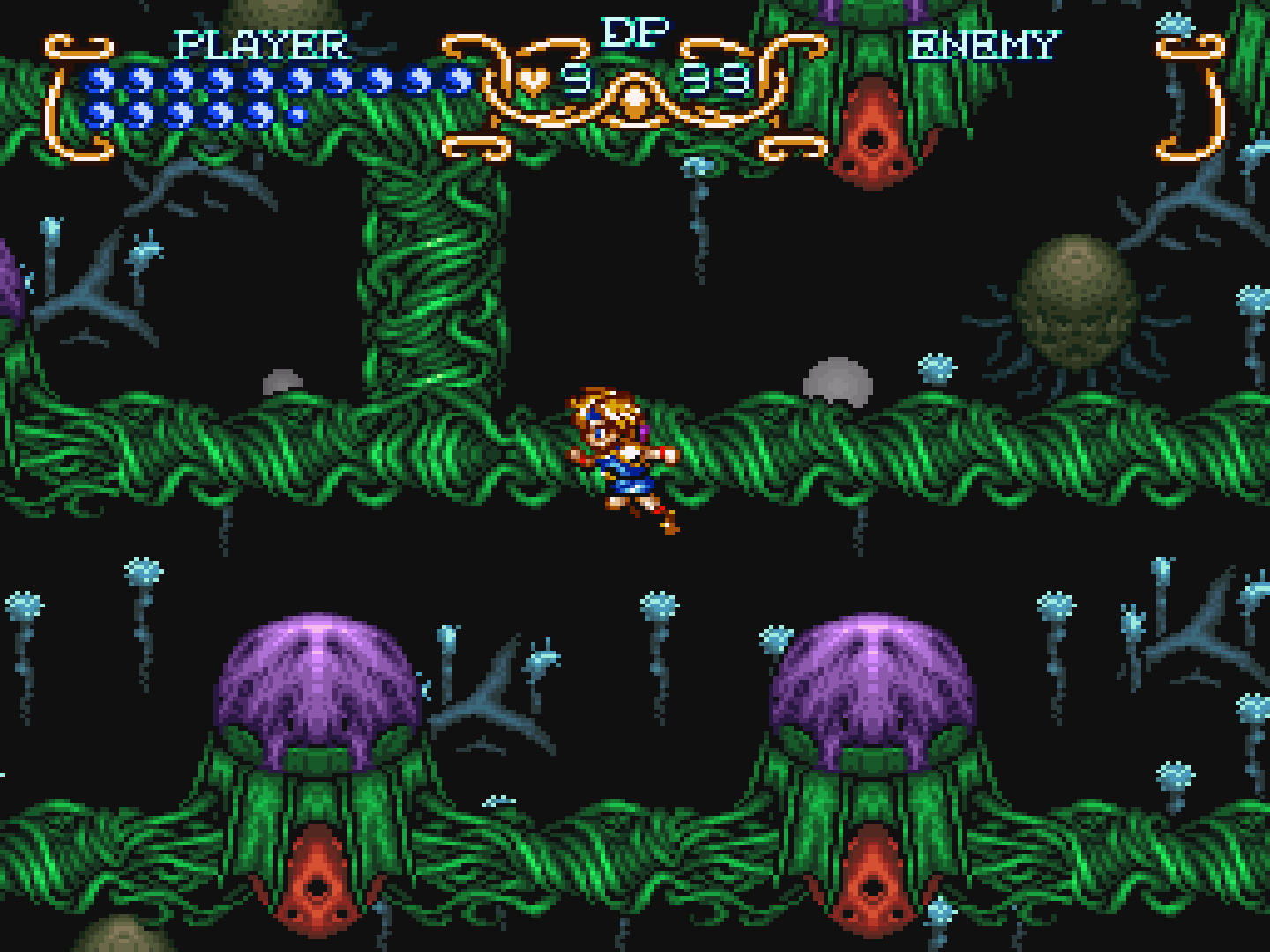 Wait a minute...if I were sprinting, I could reach that chest in the area west of here.

I end up trying a number of ways to get to that stray chest. Transforming back into Freedan didn't work. Maybe if I used a Spin Dash...

That didn't work either.

At the risk of spoilers, I read an unmarked map of the Mountain Temple. It seems there is a way to reach that chest. 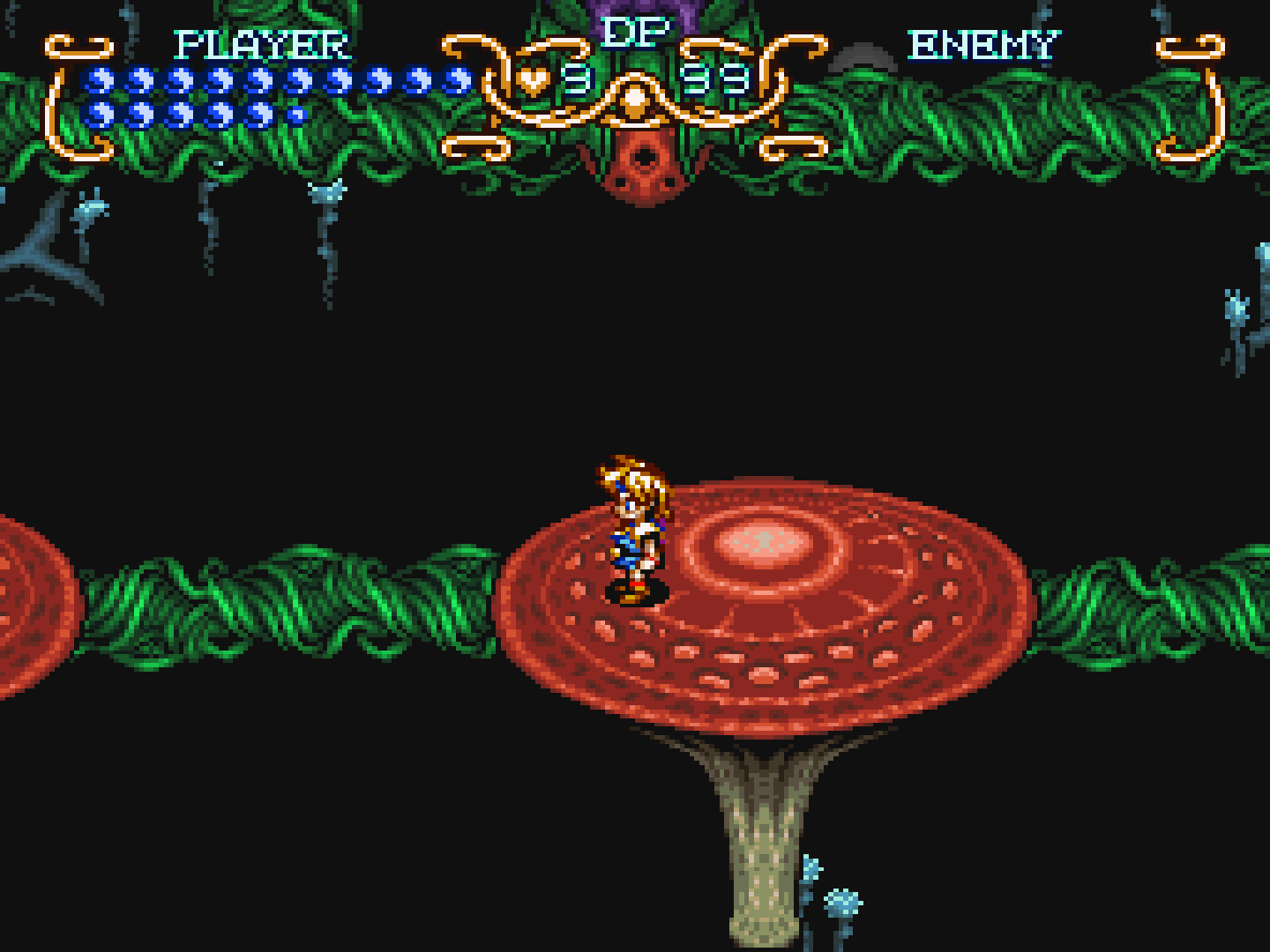 That's a lot of sprinting I have Will do!

But we find it! 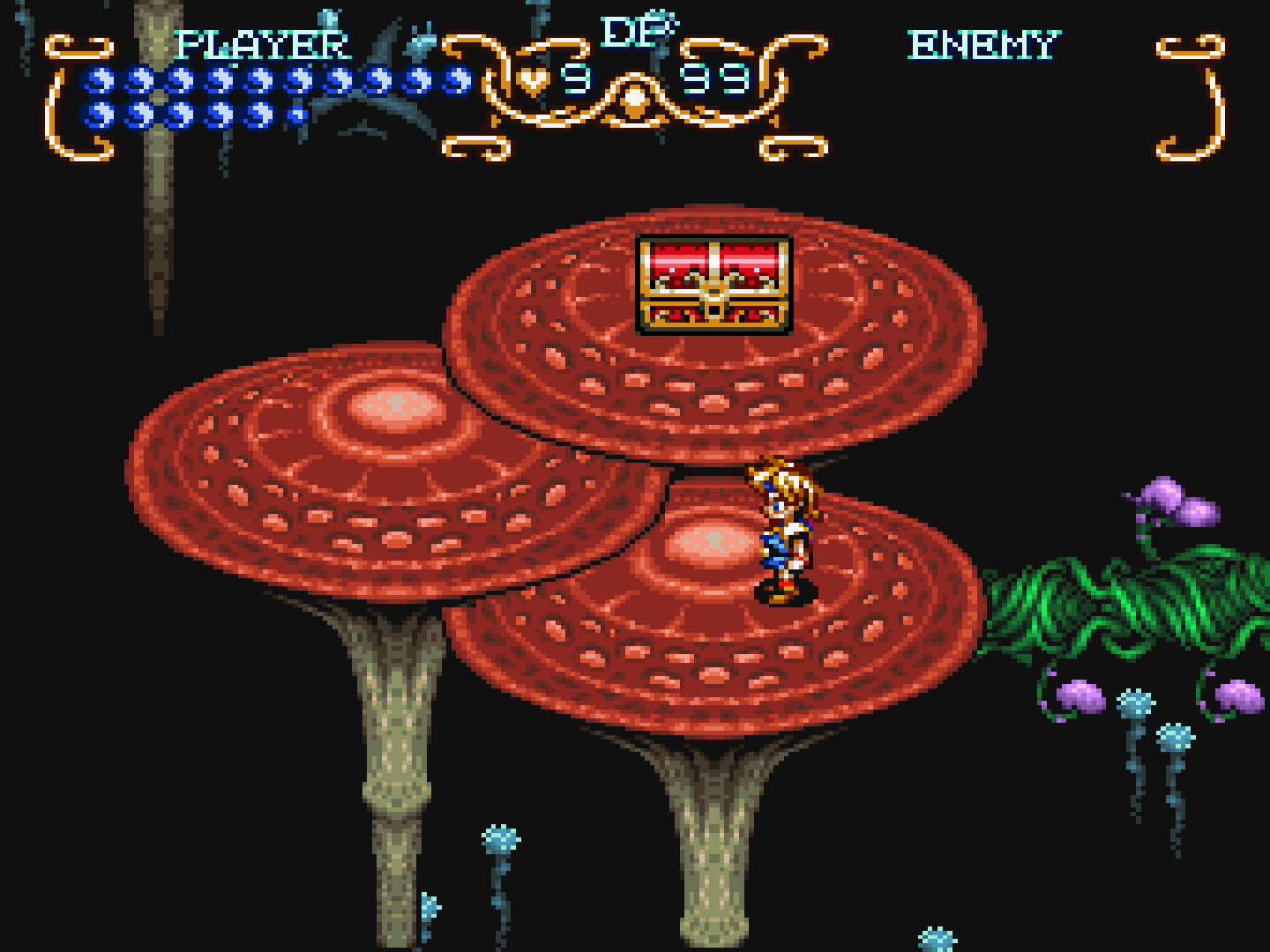 We take the quick, bouncy way back, and transform back into Freedan.

I didn't realize how huge this dungeon is until now...

Further northward, we make it into an area infested with 39 enemies!!!

Thank goodness I brought Freedan instead of Will, his attacks wouldn't have reached those floating skulls...

I manage to cut the number of enemies down to 24 and use another stalk ramp to make it to another Dark Space portal! 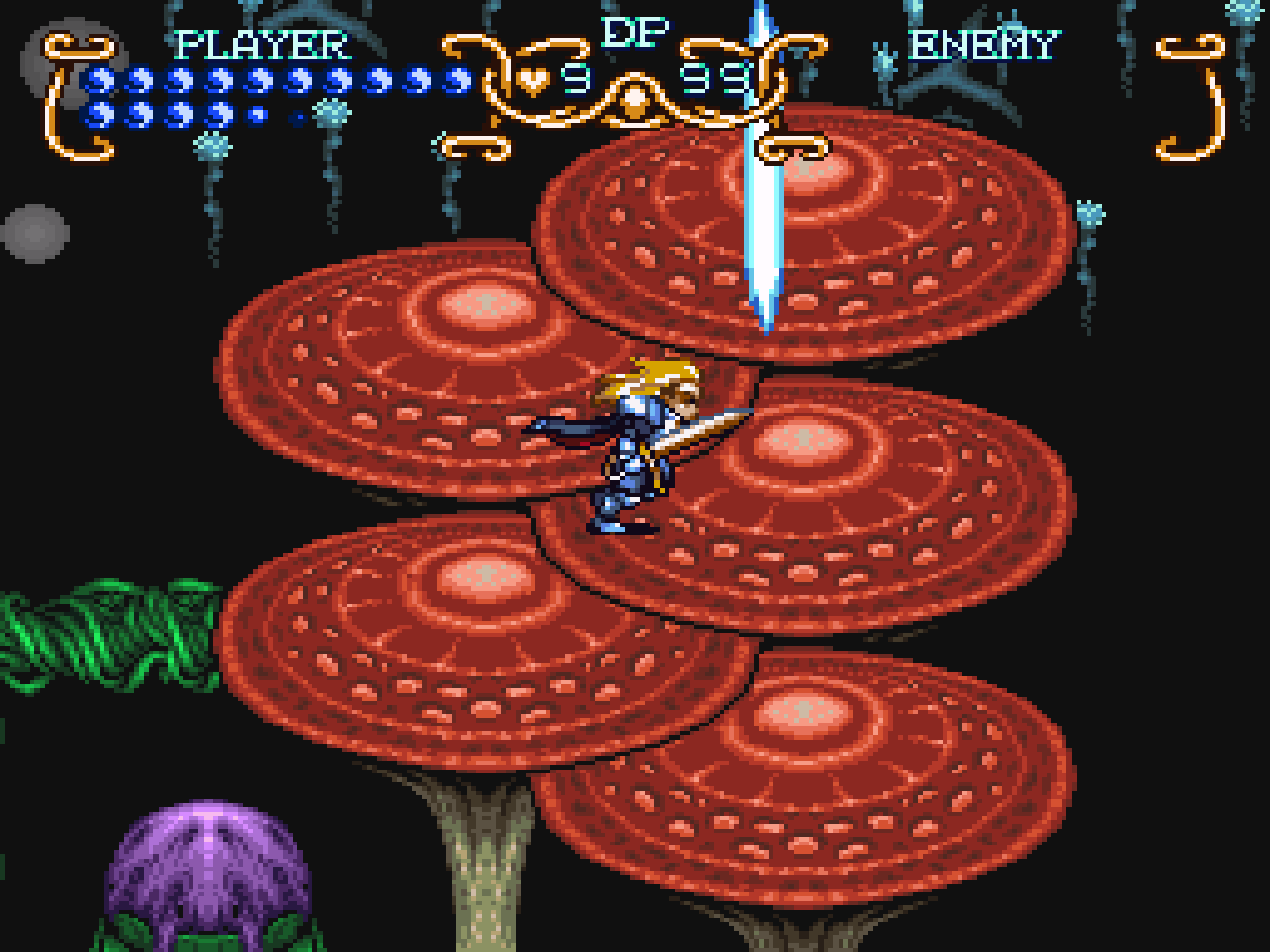 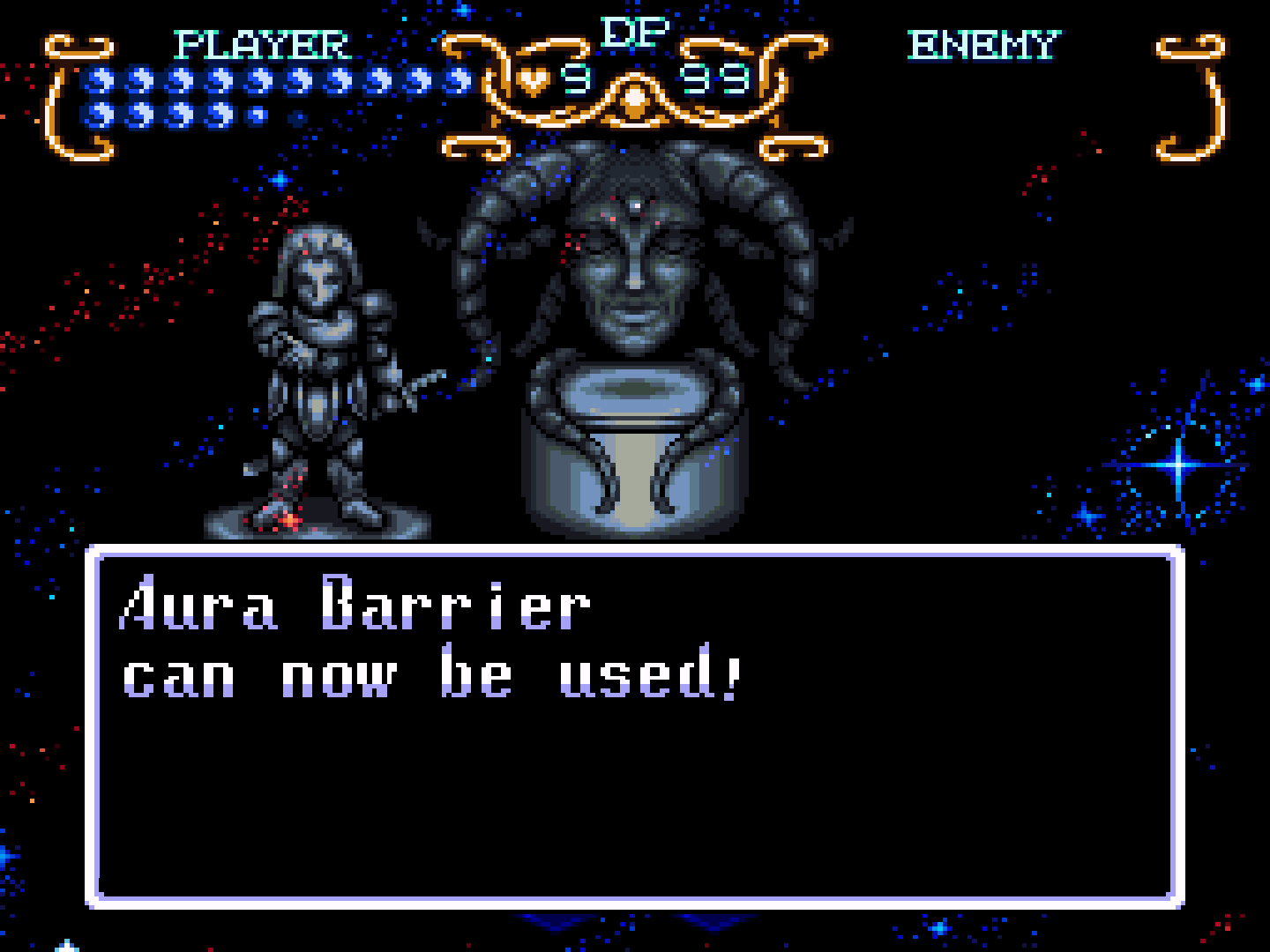 Gaia: "Use the power of the Aura to put the barrier around you. Use the Attack and LR buttons for power."

Approaching Gaia, she gives us more advice on how to use the barrier, some obvious.

Gaia: "Freedan's power is the Aura Barrier. It puts a layer of Aura around his body. Enemies at the mountain temple are strong. If you use this power, your battles will be easier."

Outside, I test Freedan's new power. 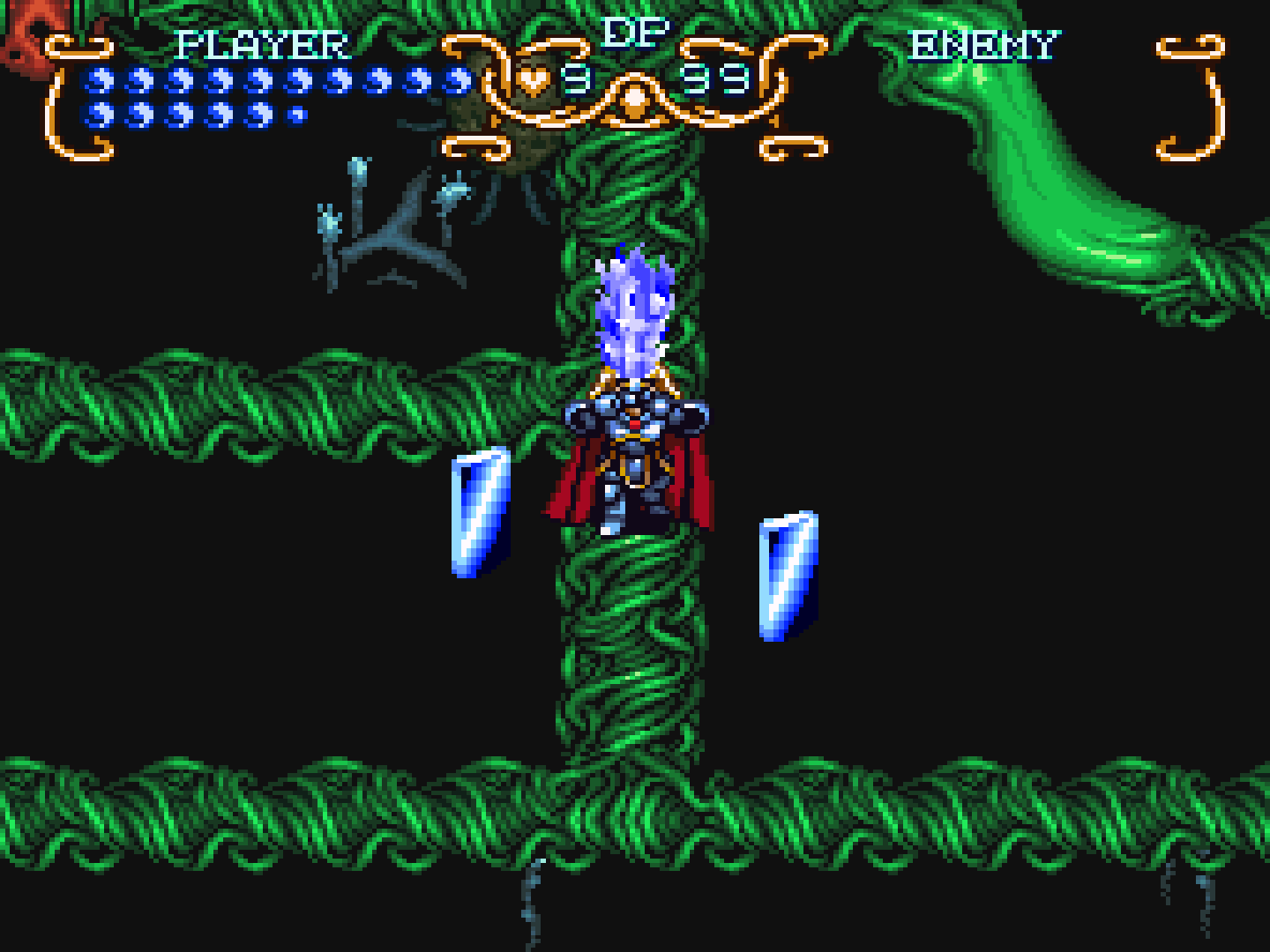 But, the barrier has a short life...

The barrier takes care of the enemies near Freedan easily.

But where's our next stop? 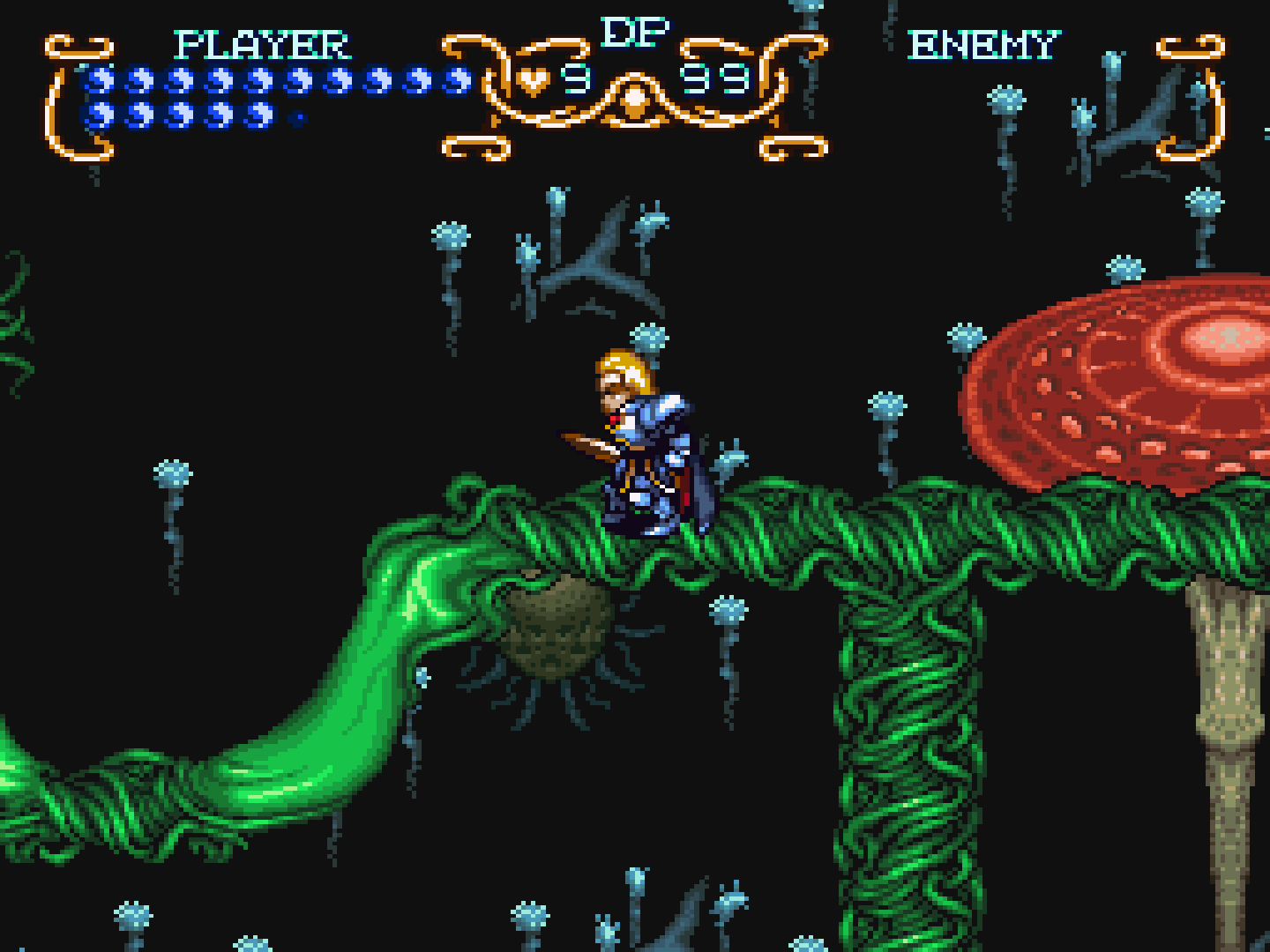 I have Freedan go east, using the barrier to take care of some of the unreachable enemies.

It's a battle of the swirling projectiles, with the fire-summoning flute player losing! 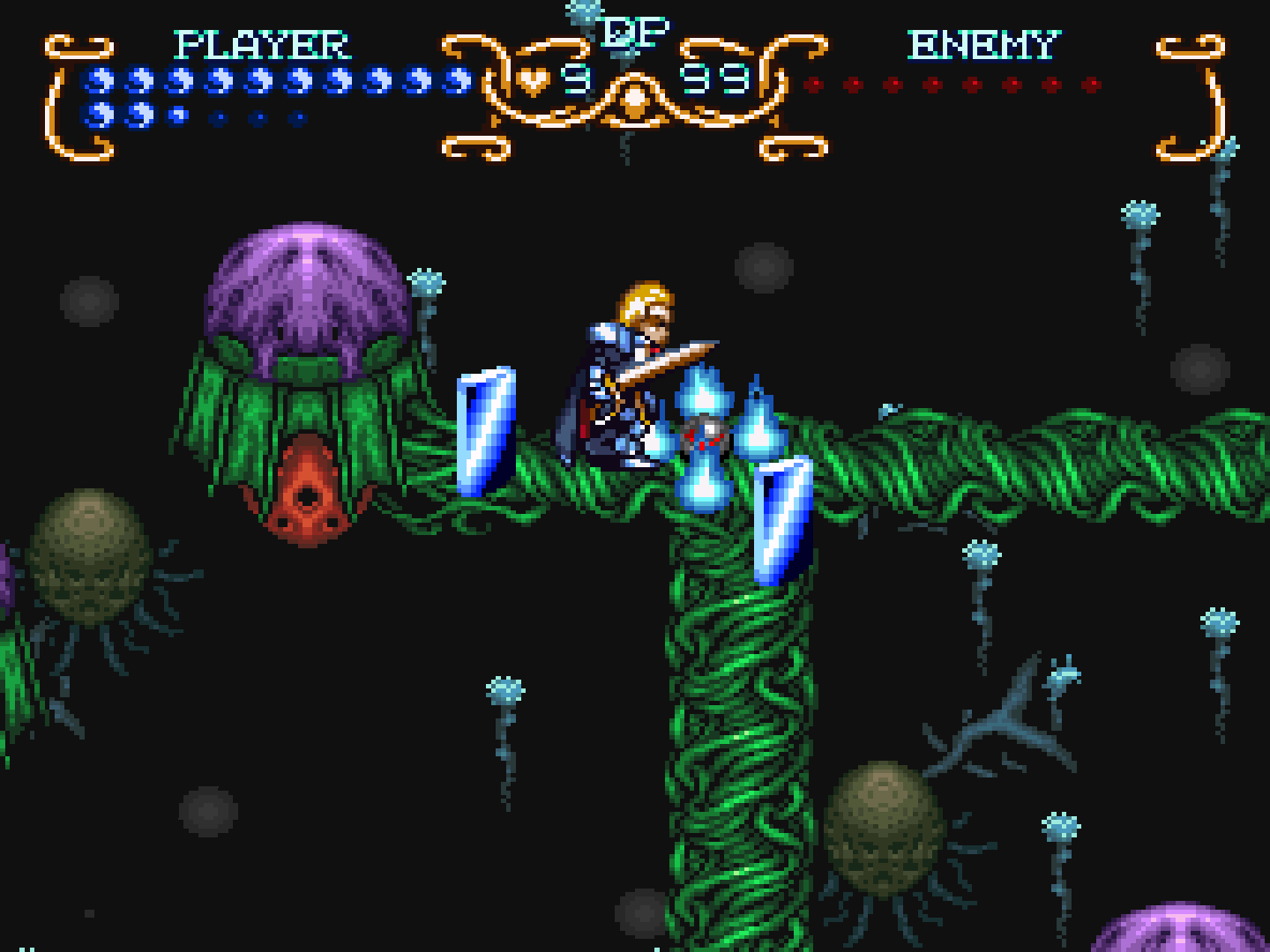 Enemies clustered on the map look a bit intimidating to face...

After taking care of them, I have Freedan bounce on the mushrooms this time... 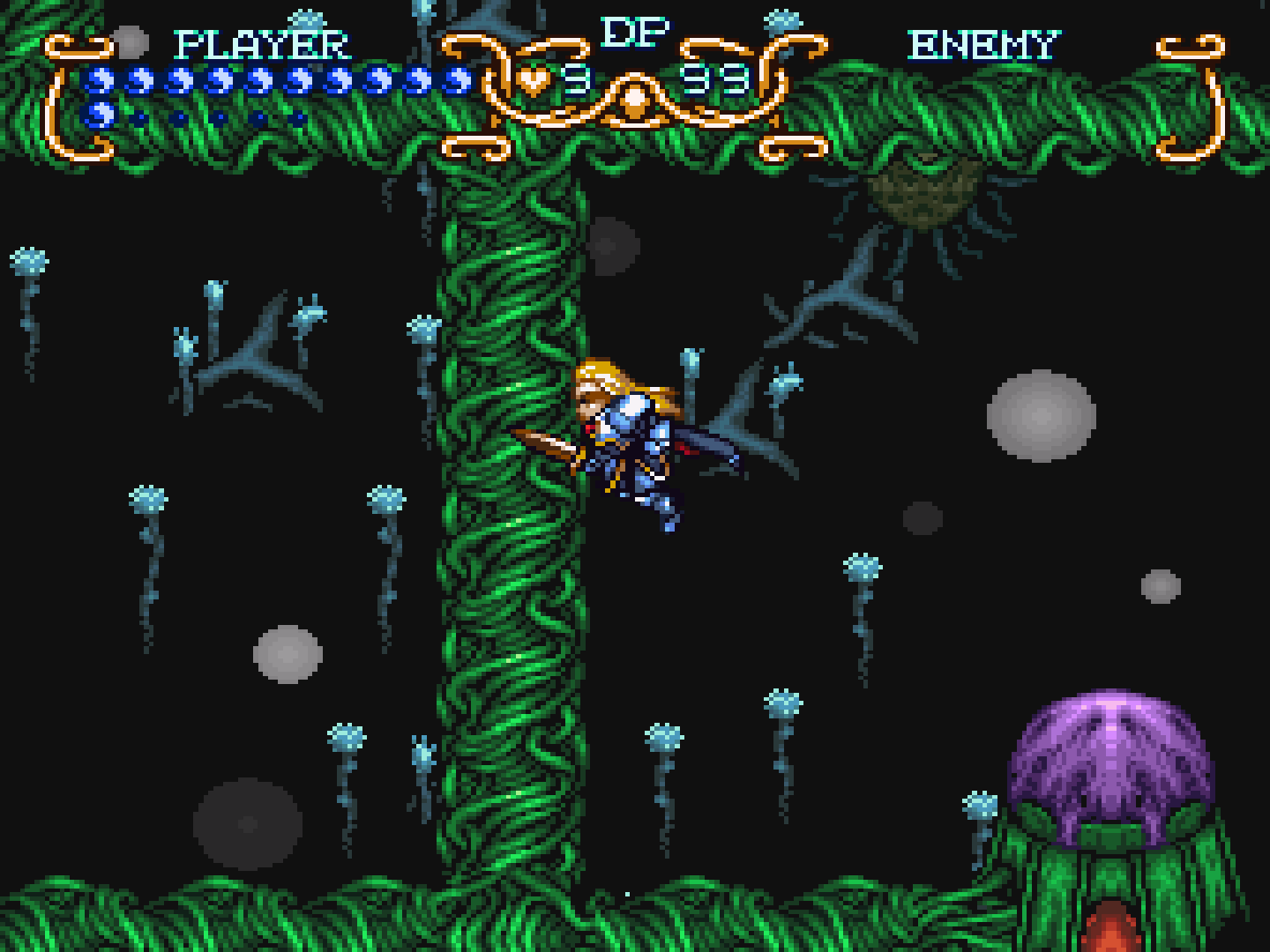 ...ending up in front of another chest full of Mushroom Drops! 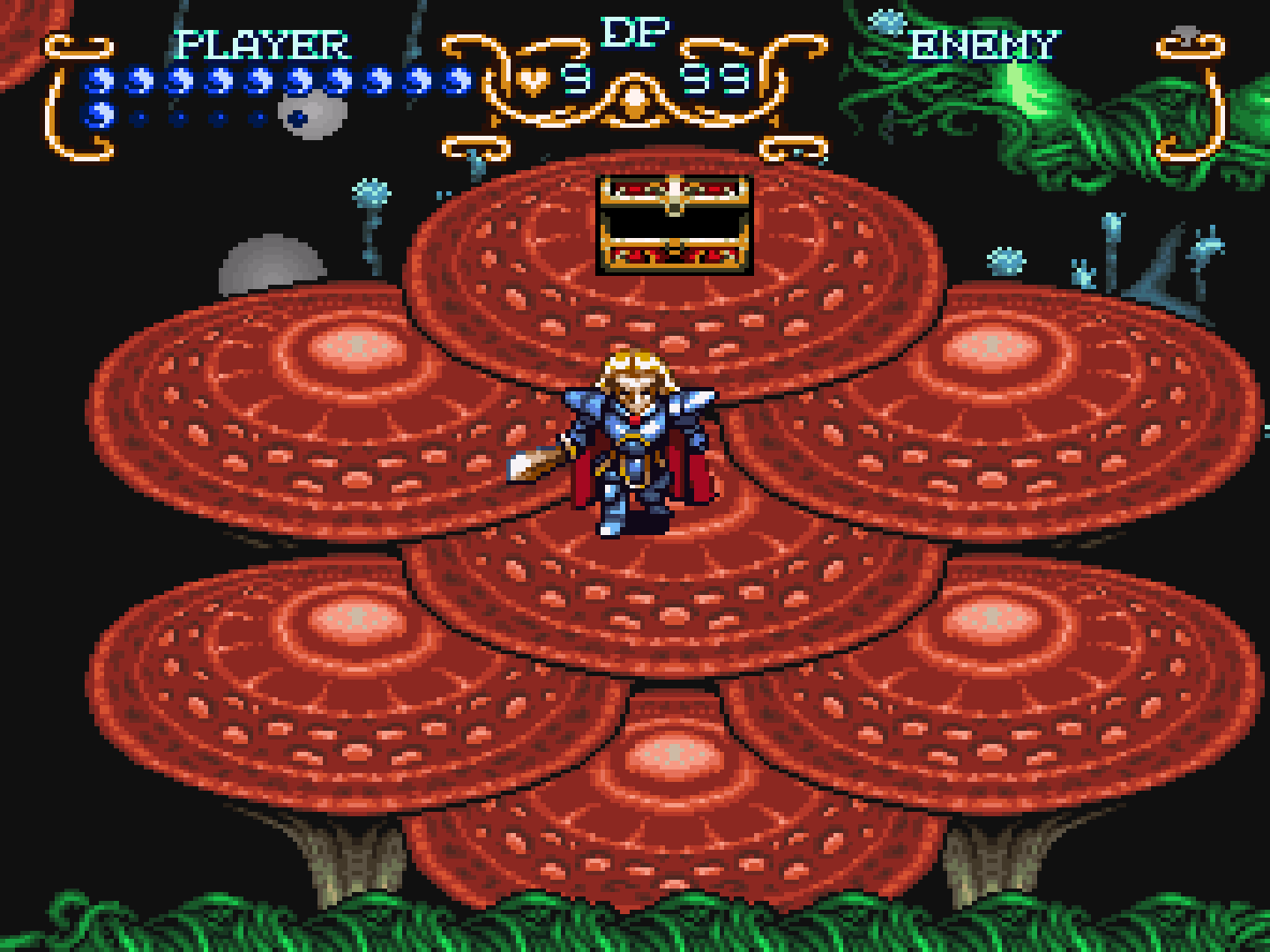 There's only one way to go from here: to the west...

I take care of the last of the enemies here with our new Dark power, winning another defense boost!

After saving and recovering, I use the drops on the stalks, and continue on once again.

Clearing this area, I win another defense boost!

This next area might lead us to more enemies, or to a boss... 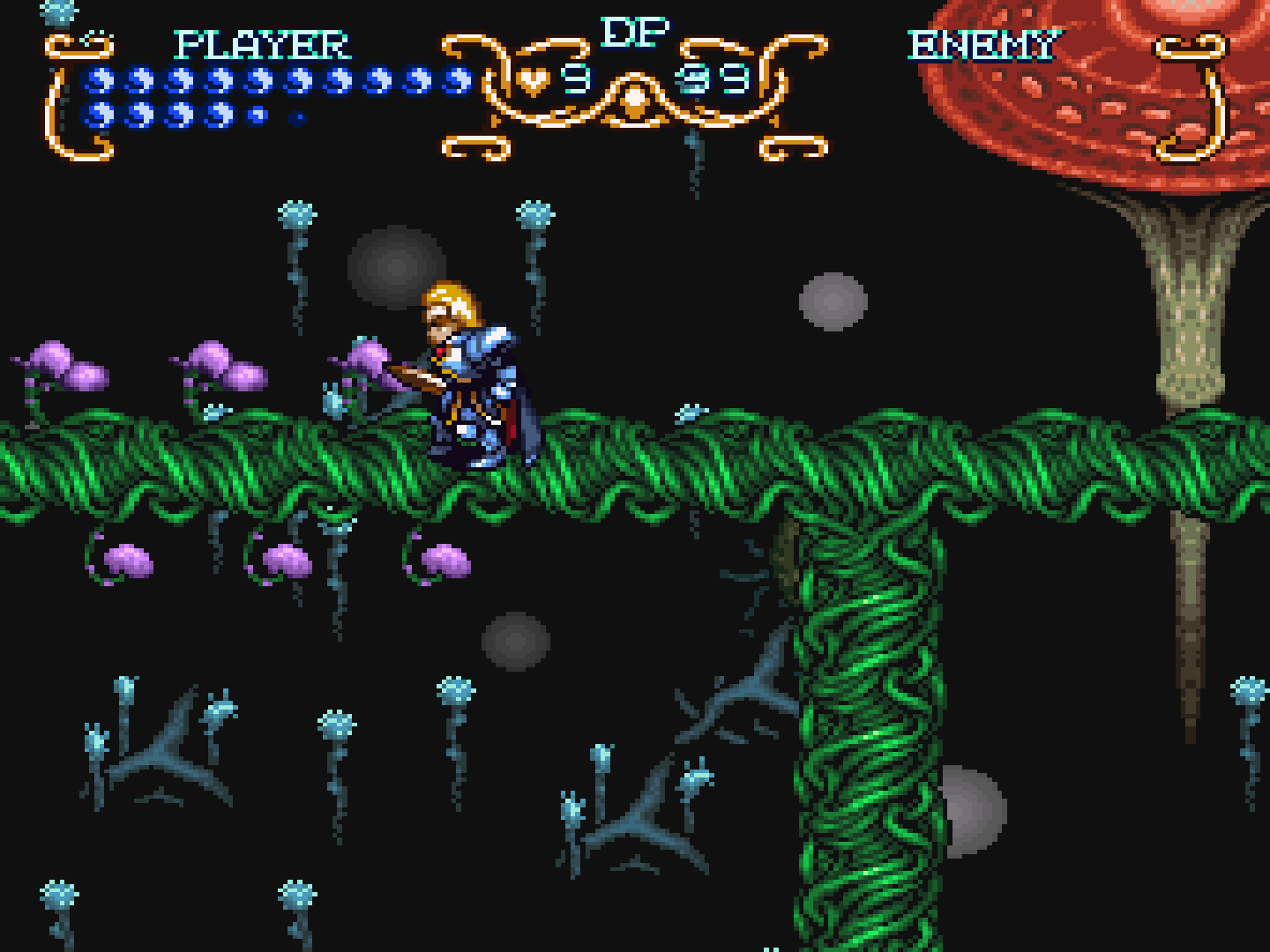 I go all the way back to the dungeon's first Dark Space portal to save before entering.

Eight monsters in the next area, not bad!

But most of them are fire summoners or floating golden skulls. 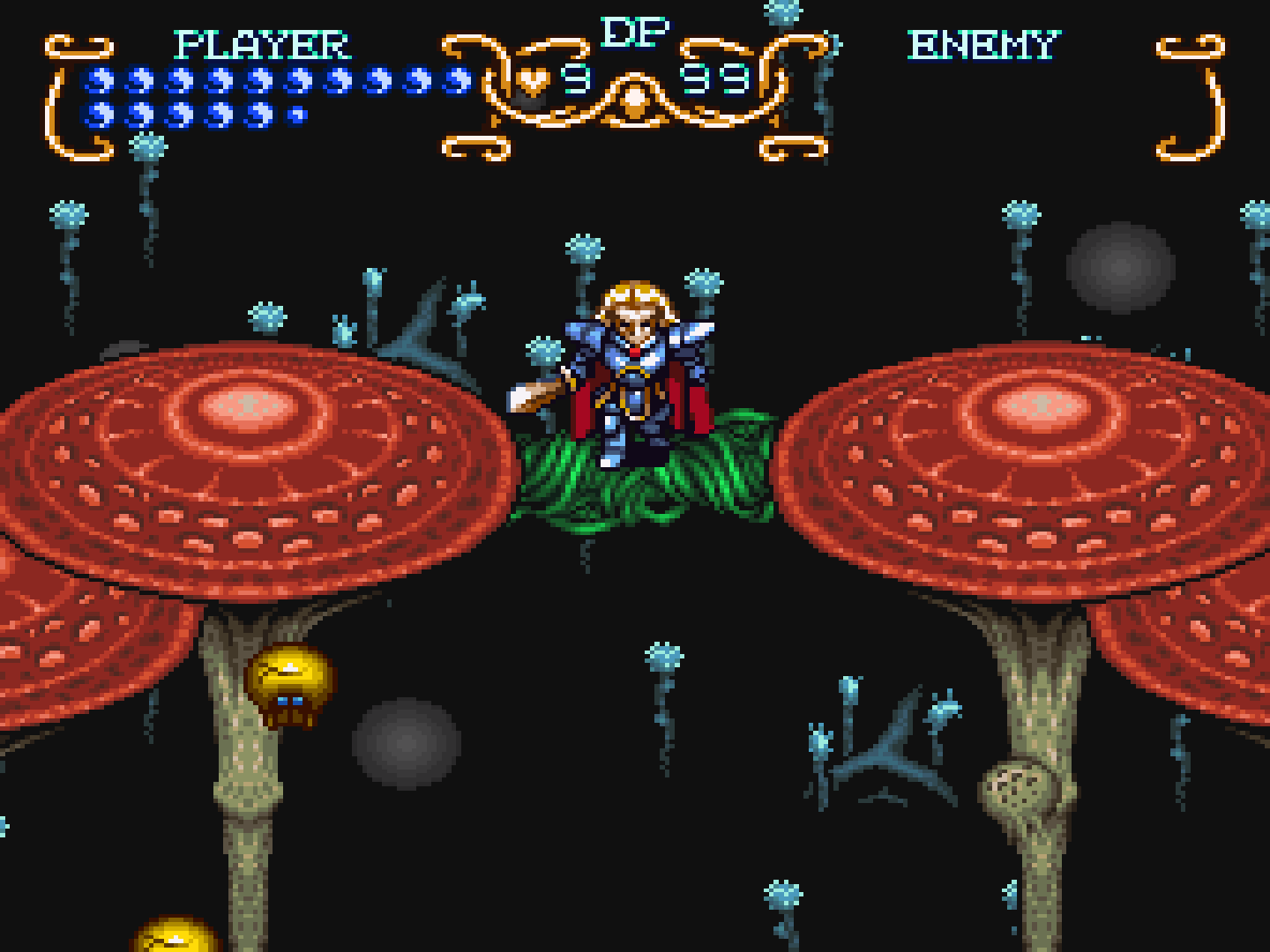 After the last fire summoner is gone, we win another strength boost!

This area up ahead may probably be the temple proper. 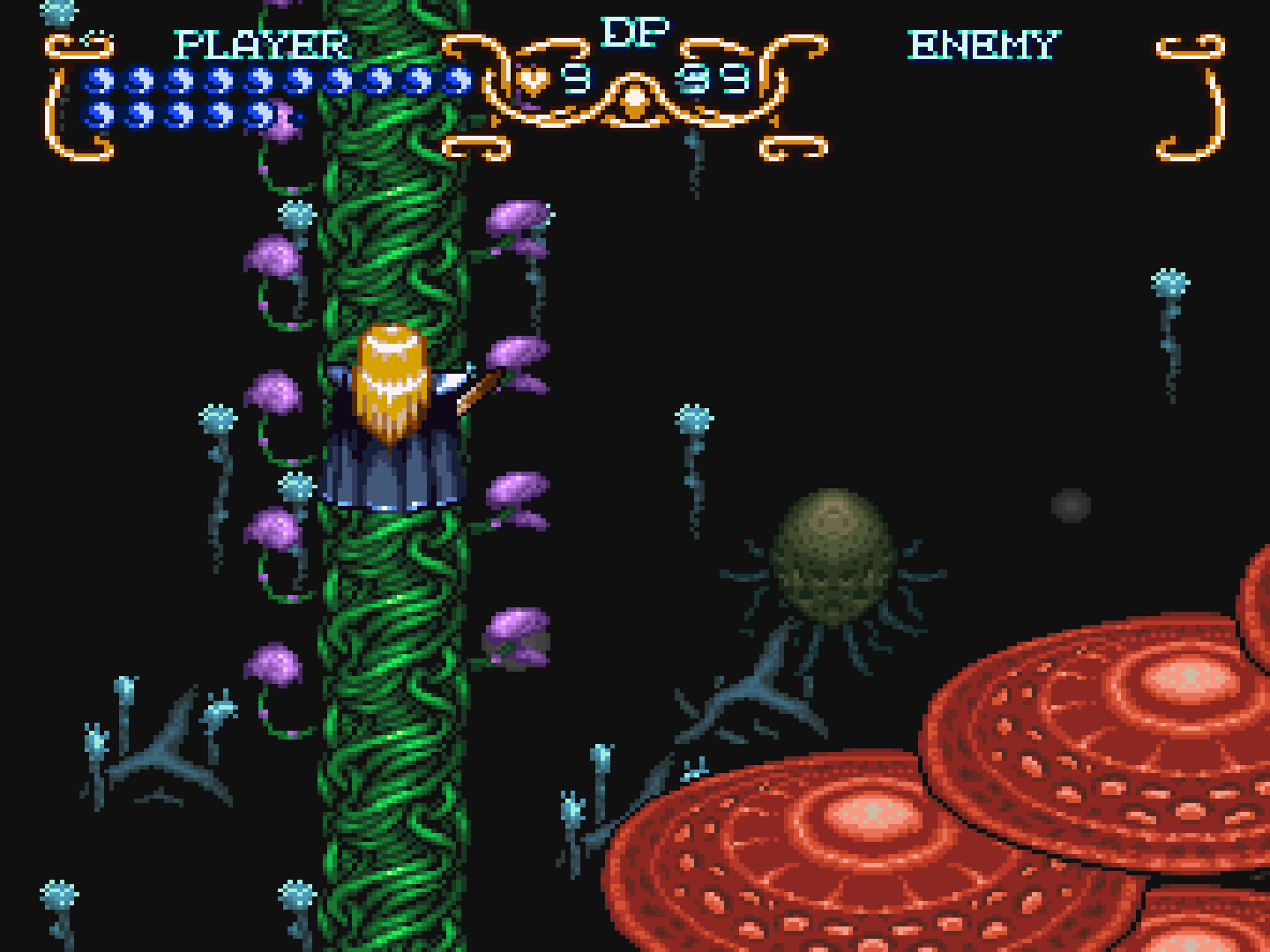 There's one chest in this area...

I slowly make our way up the long aisle of red caps, wary of a boss fight...

...but there isn't, and we leave with the treasure! 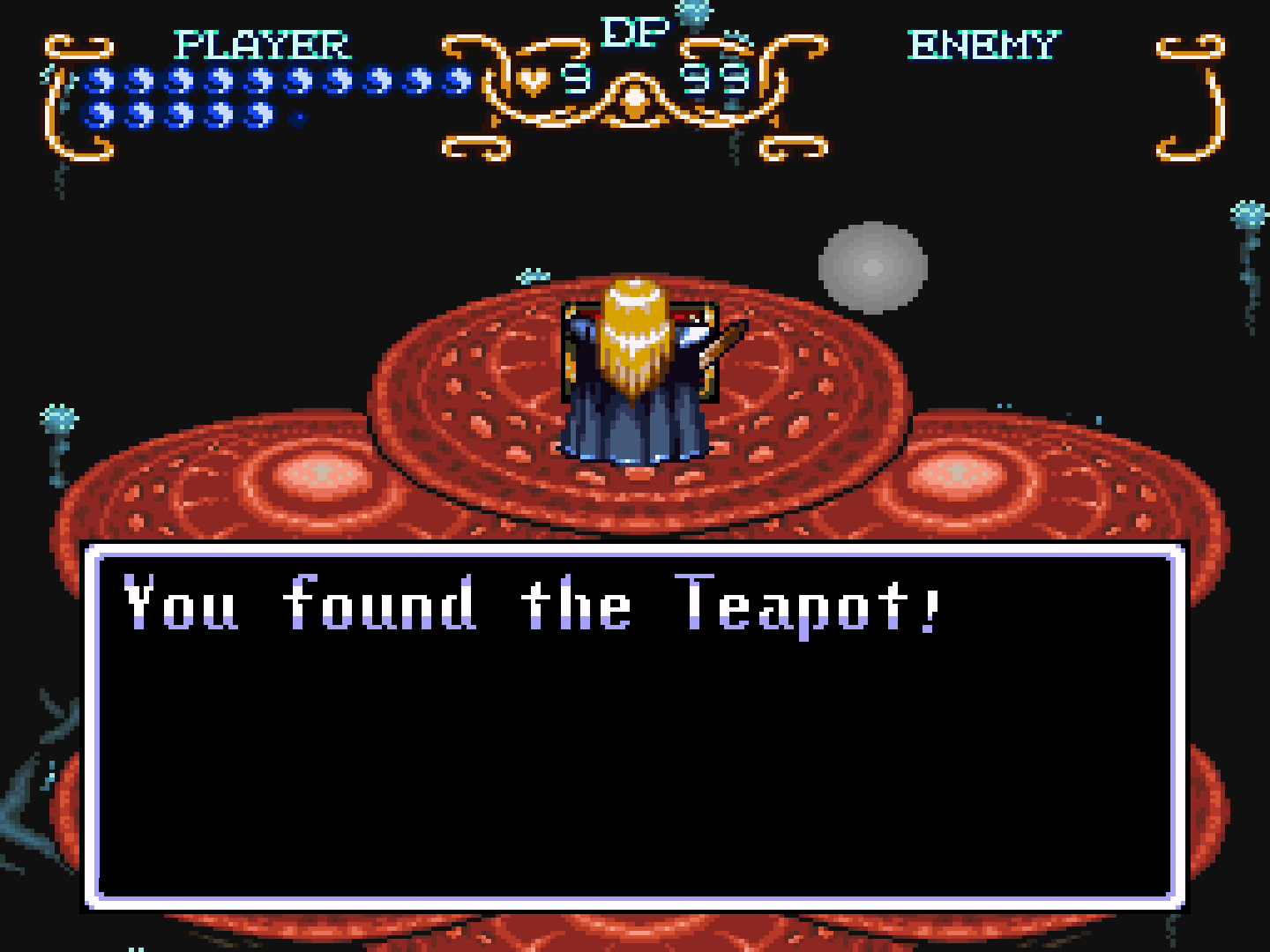 I wonder how Rofsky and Erasquez will react once they see this... 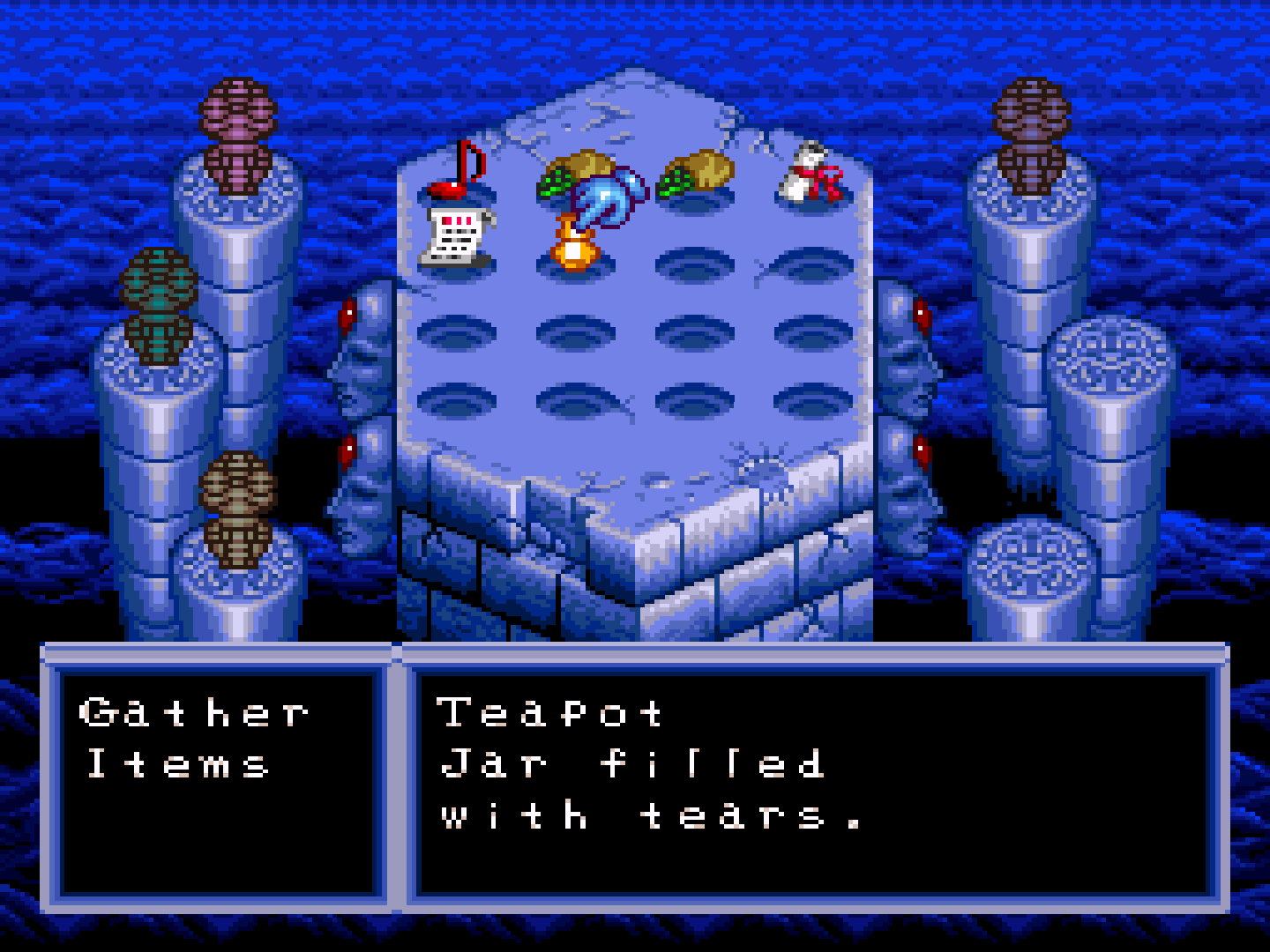 Now for the long way back to Euro...

Tbh, that temple didn't look like a temple, or maybe it was etched into the mountainside?