In the house on the left of the Jeweler... 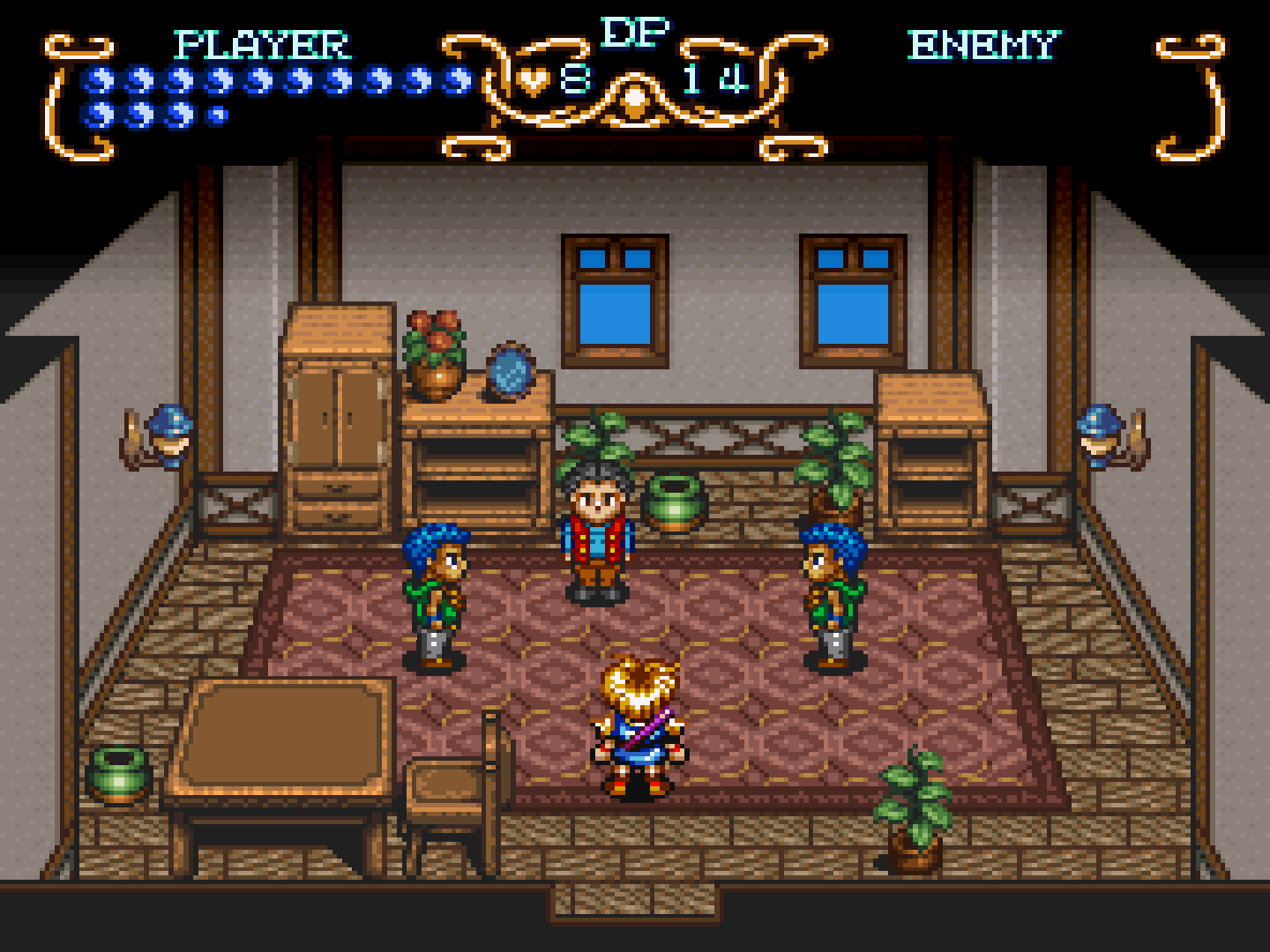 Are these guys familiar?

One of them, Max, after getting lost in Mt. Kress, wonders where they're going next.

The other blue haired guy, Rudy, is in awe of the ruins.

Their boss, the man in the middle, is an explorer named Friezer. He seems to be pretty ambitious. 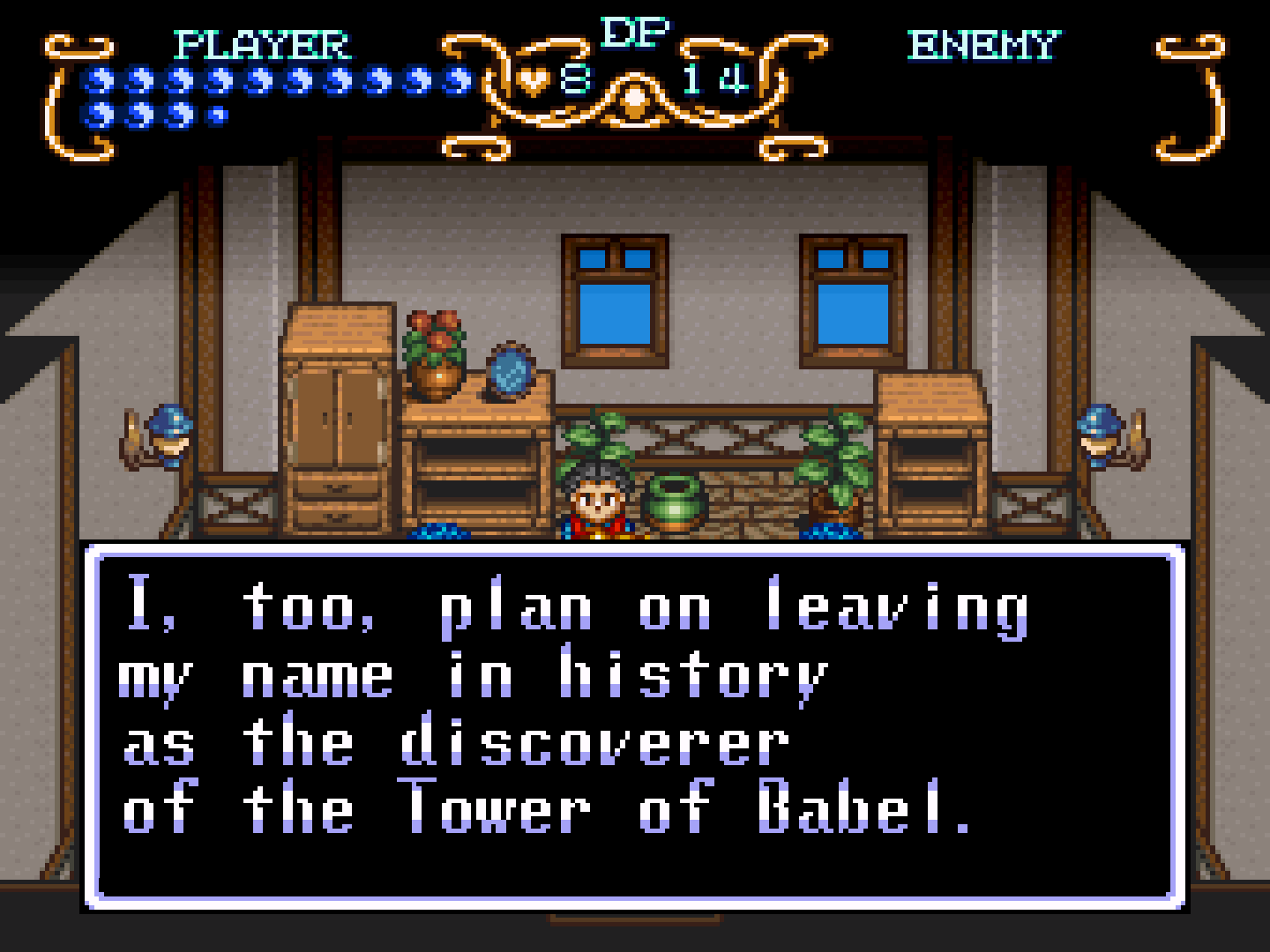 Next street onwards, covered by an alleyway, I have Will climb a ladder into the eastern entrance of the Rolek manor. 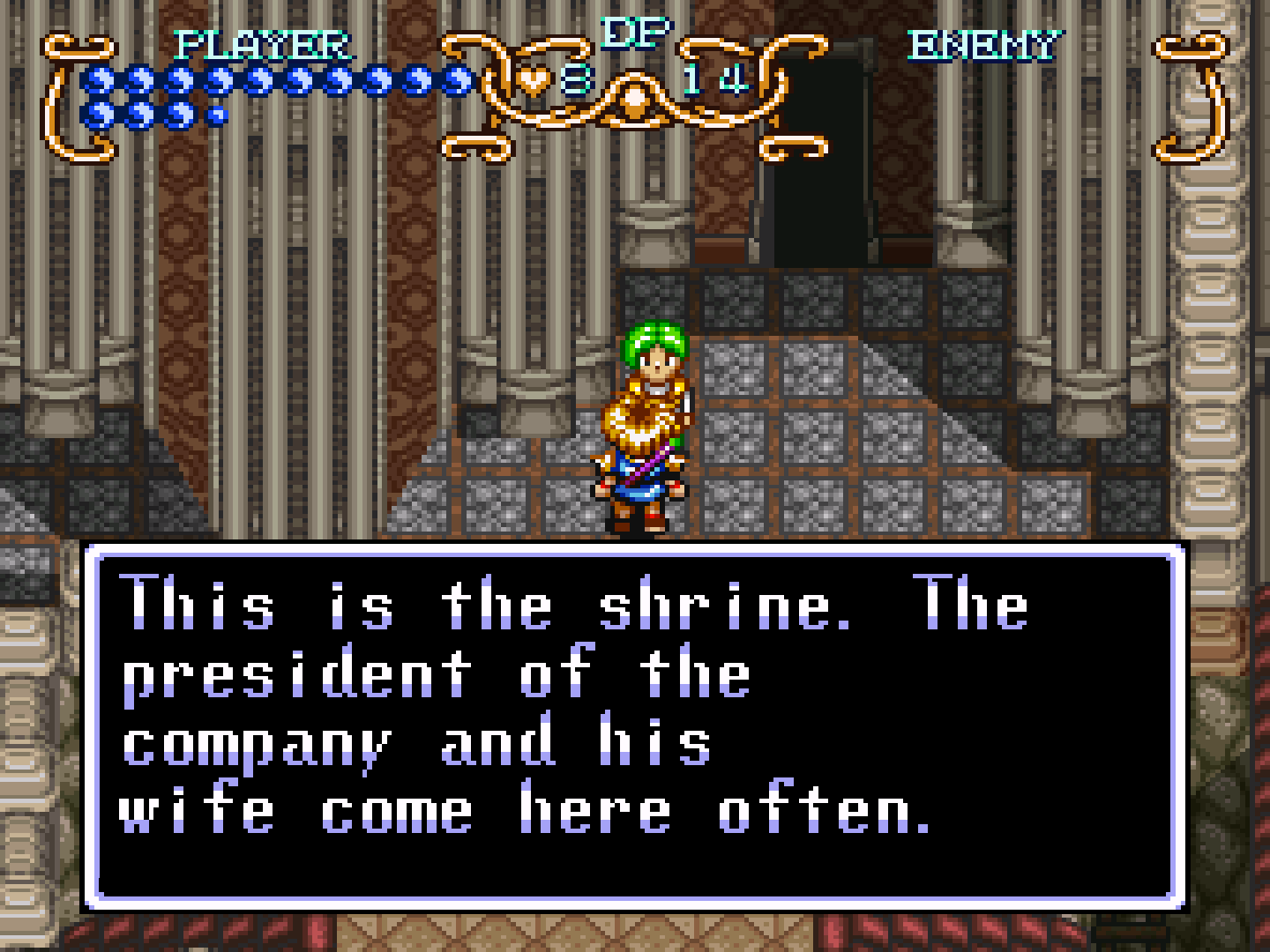 Nintendo probably changed this line from a church, I'm guessing. 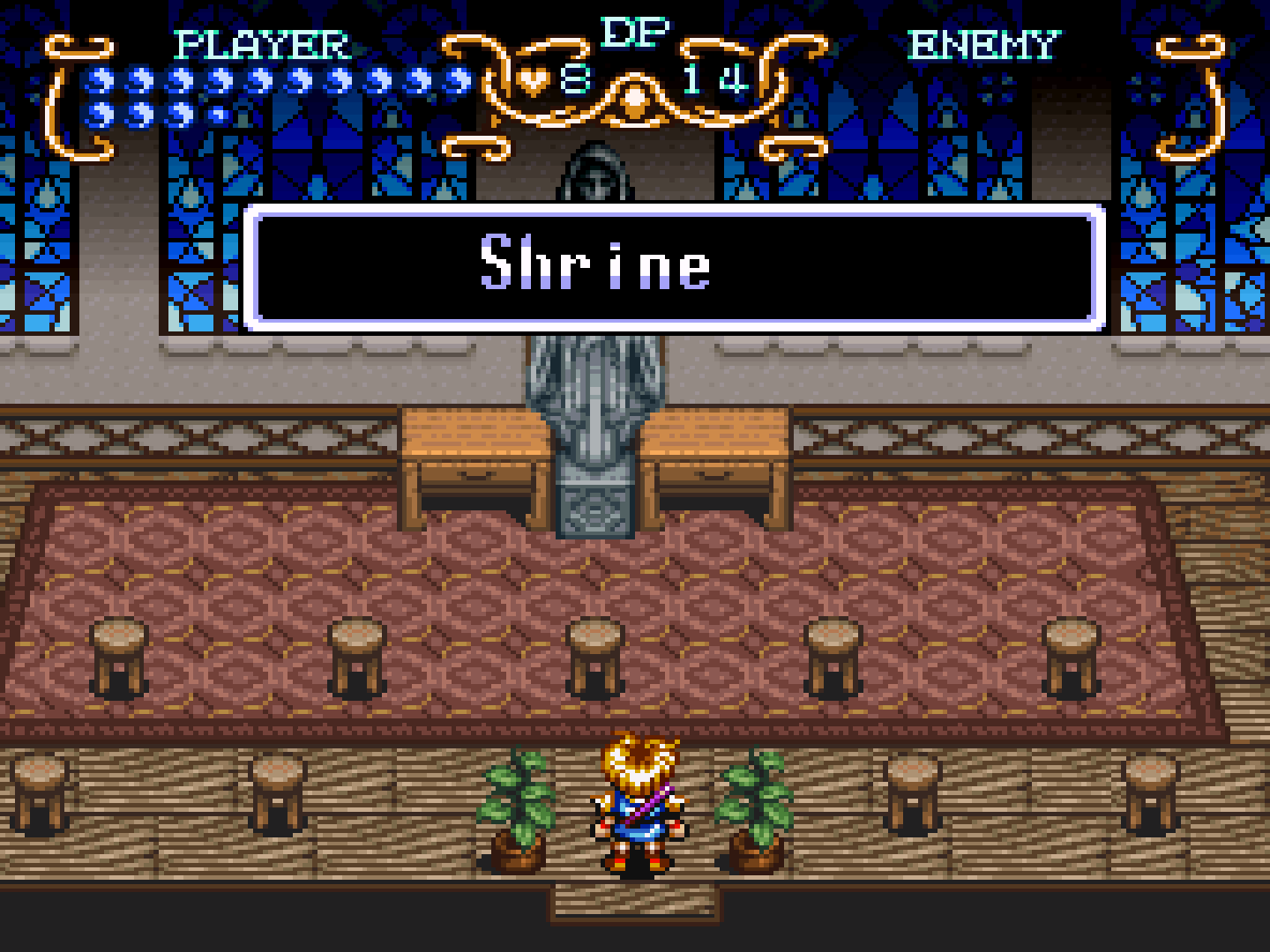 Referencing the map online, I press A in front of the Mother Mary statue.

Will notices a breeze before I notice a shape of a doorway behind the statue soon after. 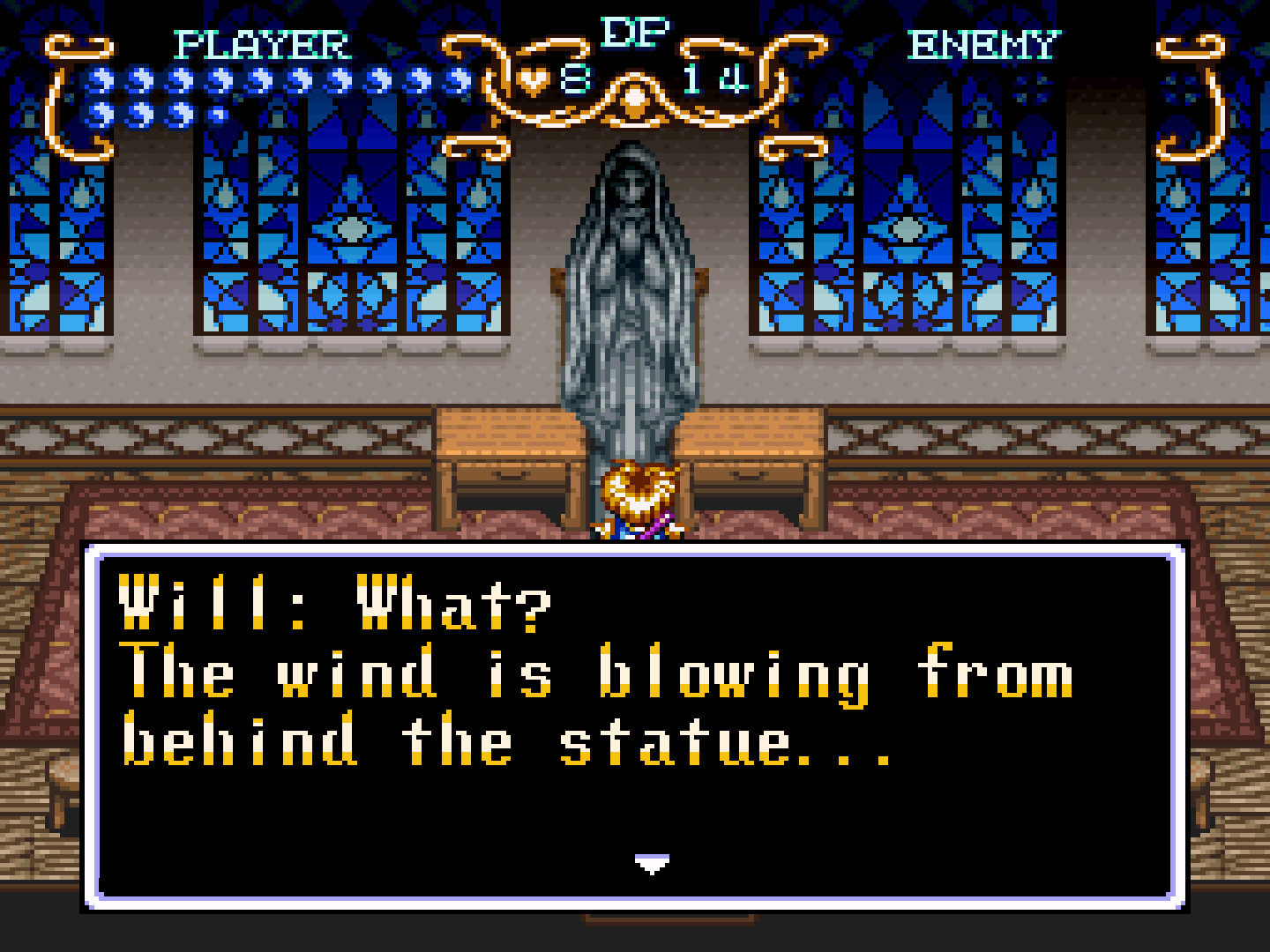 Curious, we look at what's behind the statue. 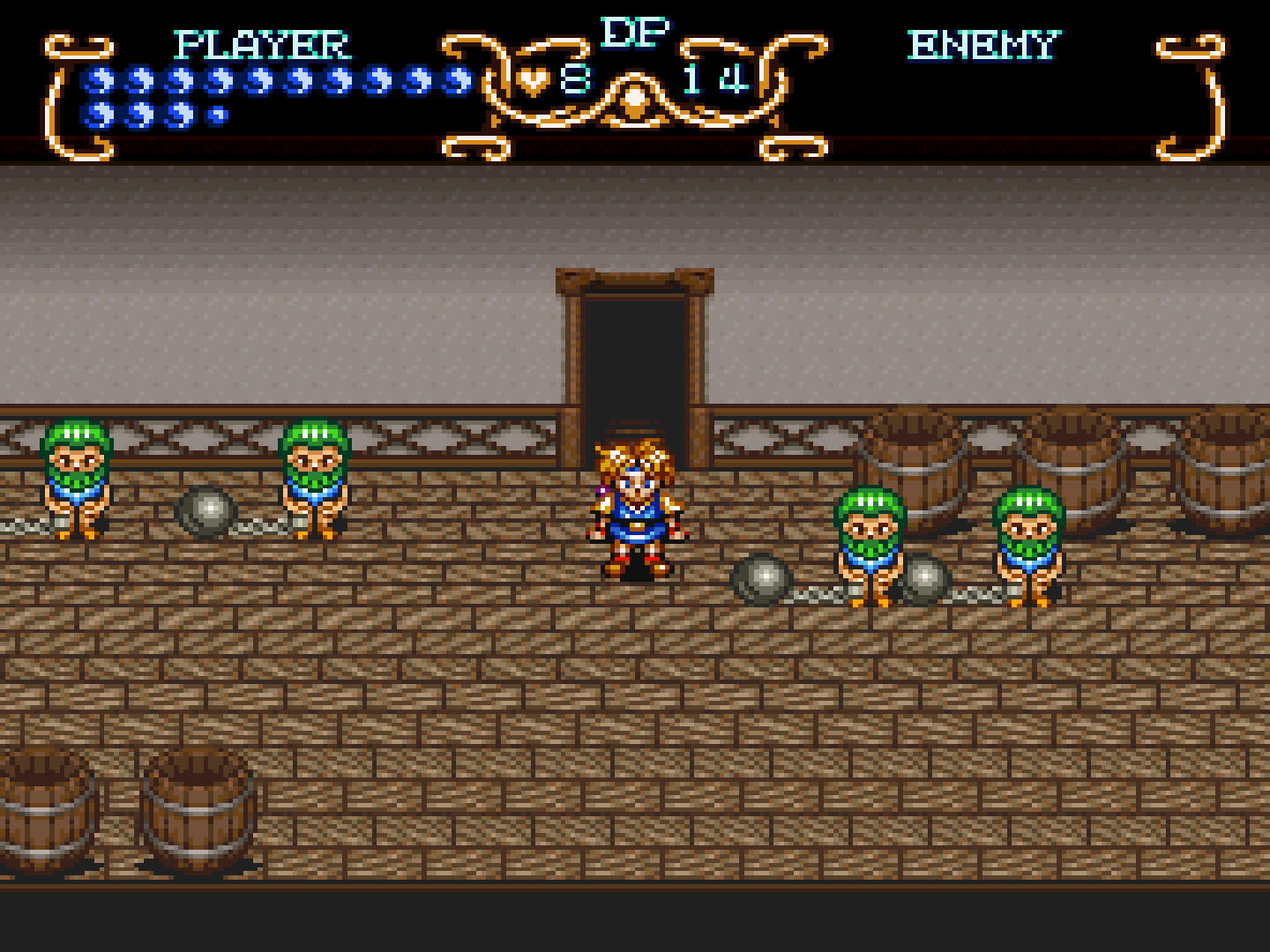 One laborer mentions a skeleton that used to be his friend. He was ordered to carry his friend's body to the end of the hall!

Another laborer "misses wanting to speak [his] own language" and is forced to fight...

A third laborer mentions the stone-turning disease again that's spreading from Asia. He's made up his mind to run away...

Some of the people here know a bit of Will's language.

At the southeastern barrel of the room, we find another Red Jewel!

Good luck to them! I hope they find their freedom soon...

I climb back down and enter another house. Its entrance is not visible in-game, as it's blocked by the roof of the house in front of it.

As a reward for finding the house, the man rewards us. 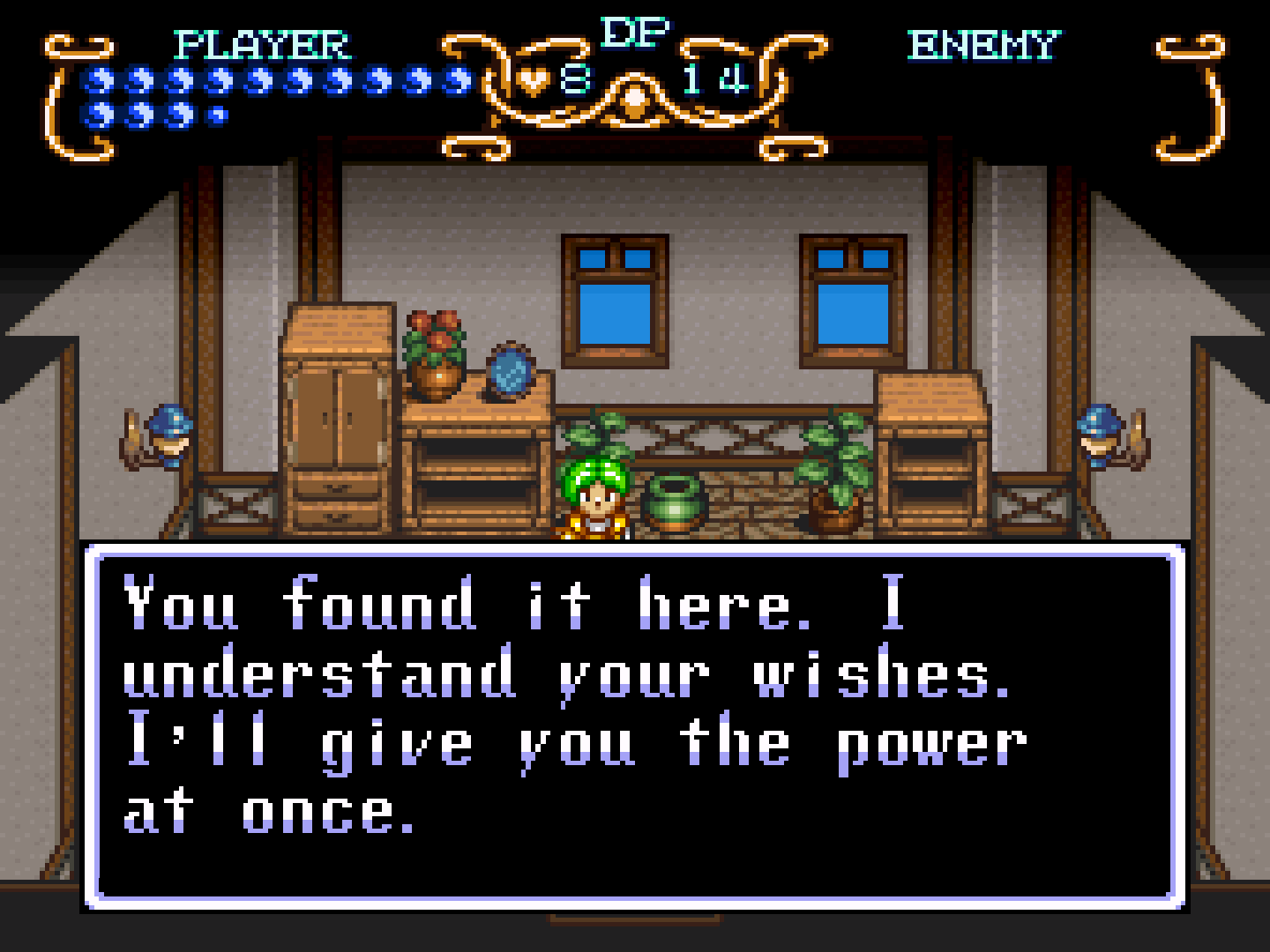 But with what? I have Will go over to the barrel. Nothing. He tells us to go.

From reading the guide, it turns out we get a Strength Boost!

We head back to the Jeweler, knowing we have 20 Red Jewels so far.

Will's abilities get a power boost as a reward.

If we get 30 Red Jewels, Freedan's powers get a powerup!

I go over to merchant's row to look at the wares. One of them is selling a teapot of women's tears, another is selling a book Rofsky wrote.

Unfortunately, someone's also catching up to us... 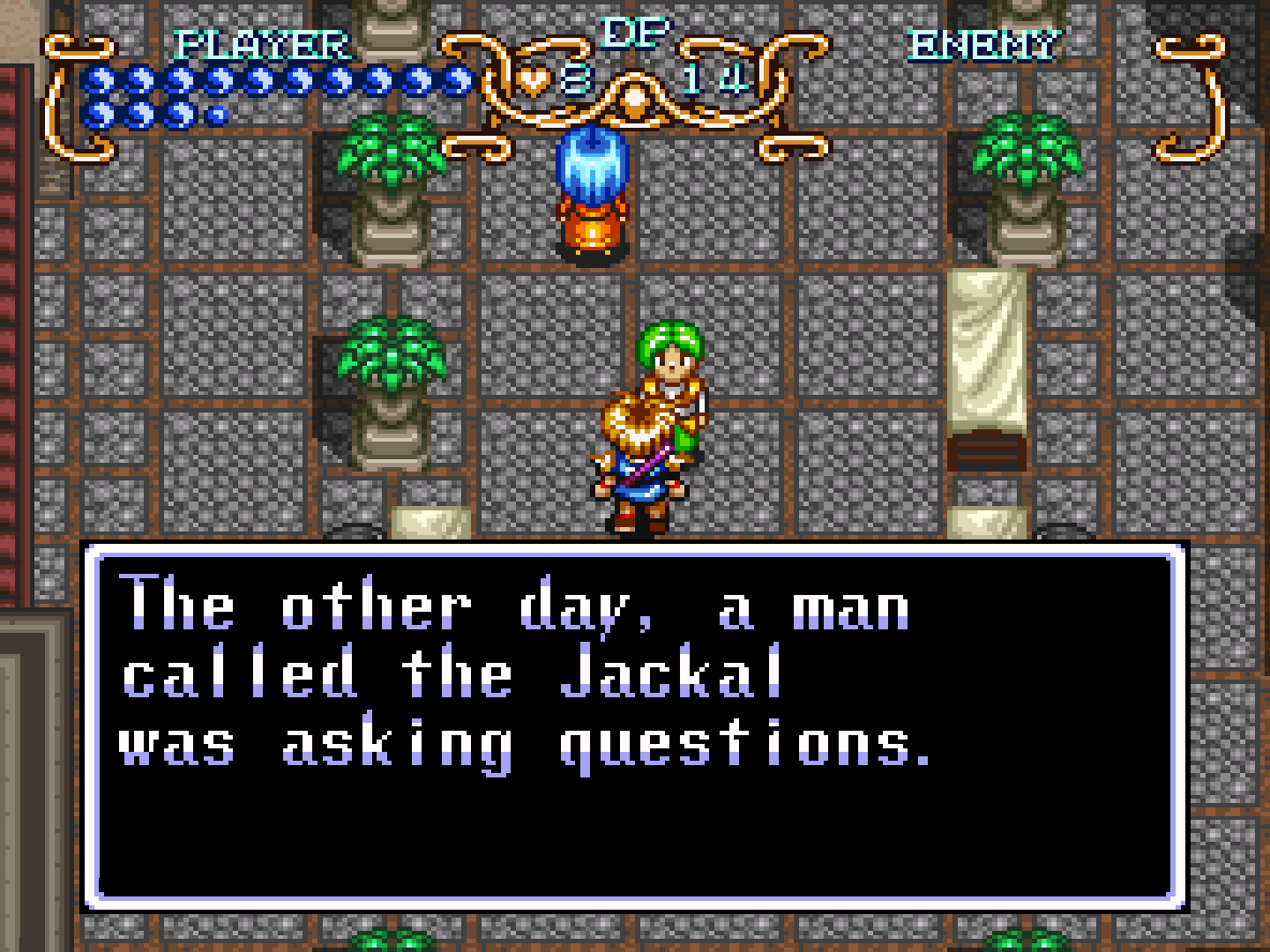 A blue-haired woman asks if we believe in fortune tellers. I say yes. She repeats the same prophecy we heard back in Lilly's village, mentioning the descending comet, and Earth's impending doom.

Corn meal, drinks, and fish, along with fruits are being sold. 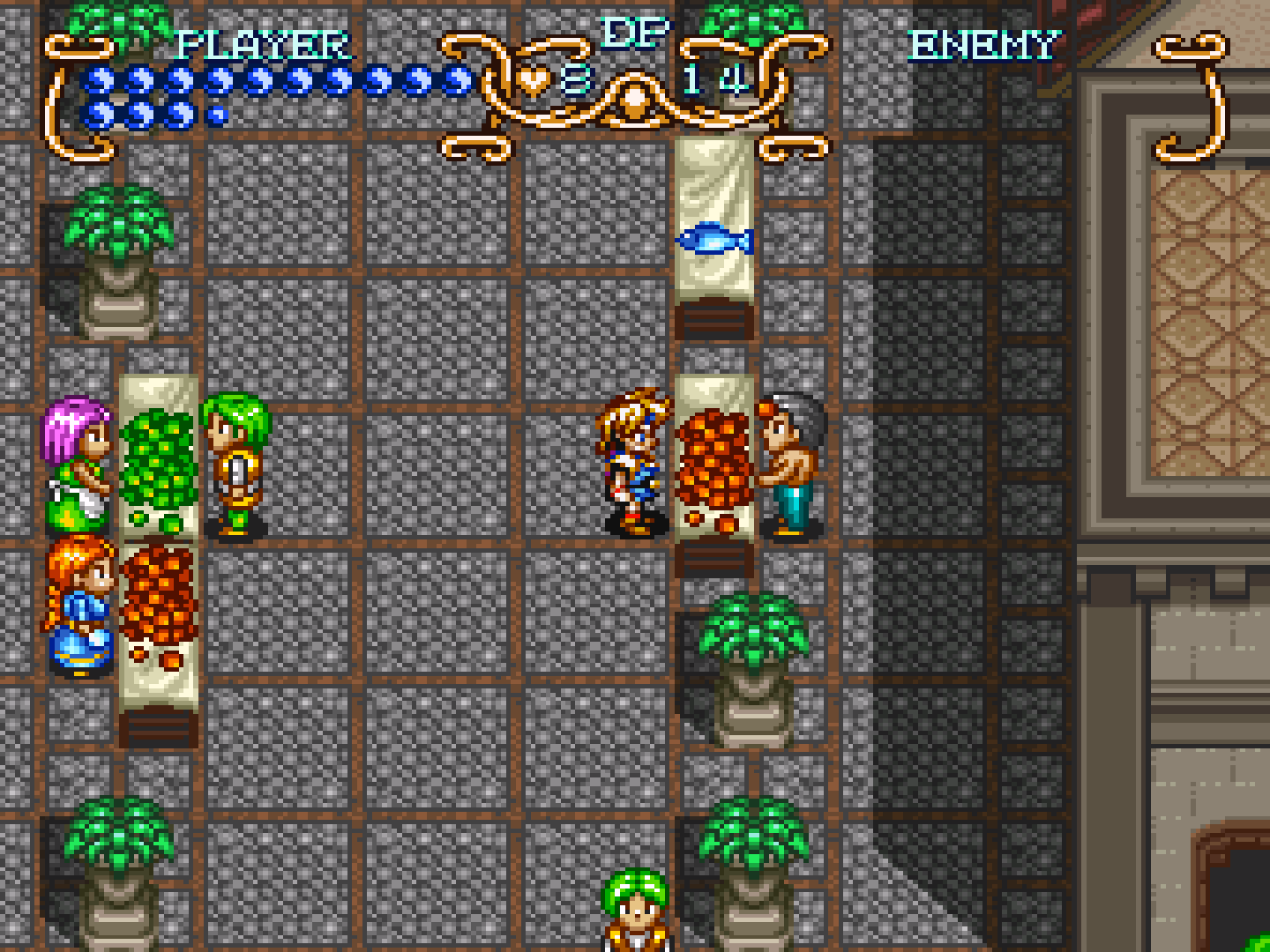 One woman offers an apple to Will for free!

A man in front of the green fruit stand still likes the Roleks and their company, despite their...questionable actions. *shudders*

I have Will fall in the long line east of merchant's row, leading into a building.

The woman in front of Will's curious about the line too.

A man two spaces after her points out why they're lining up. 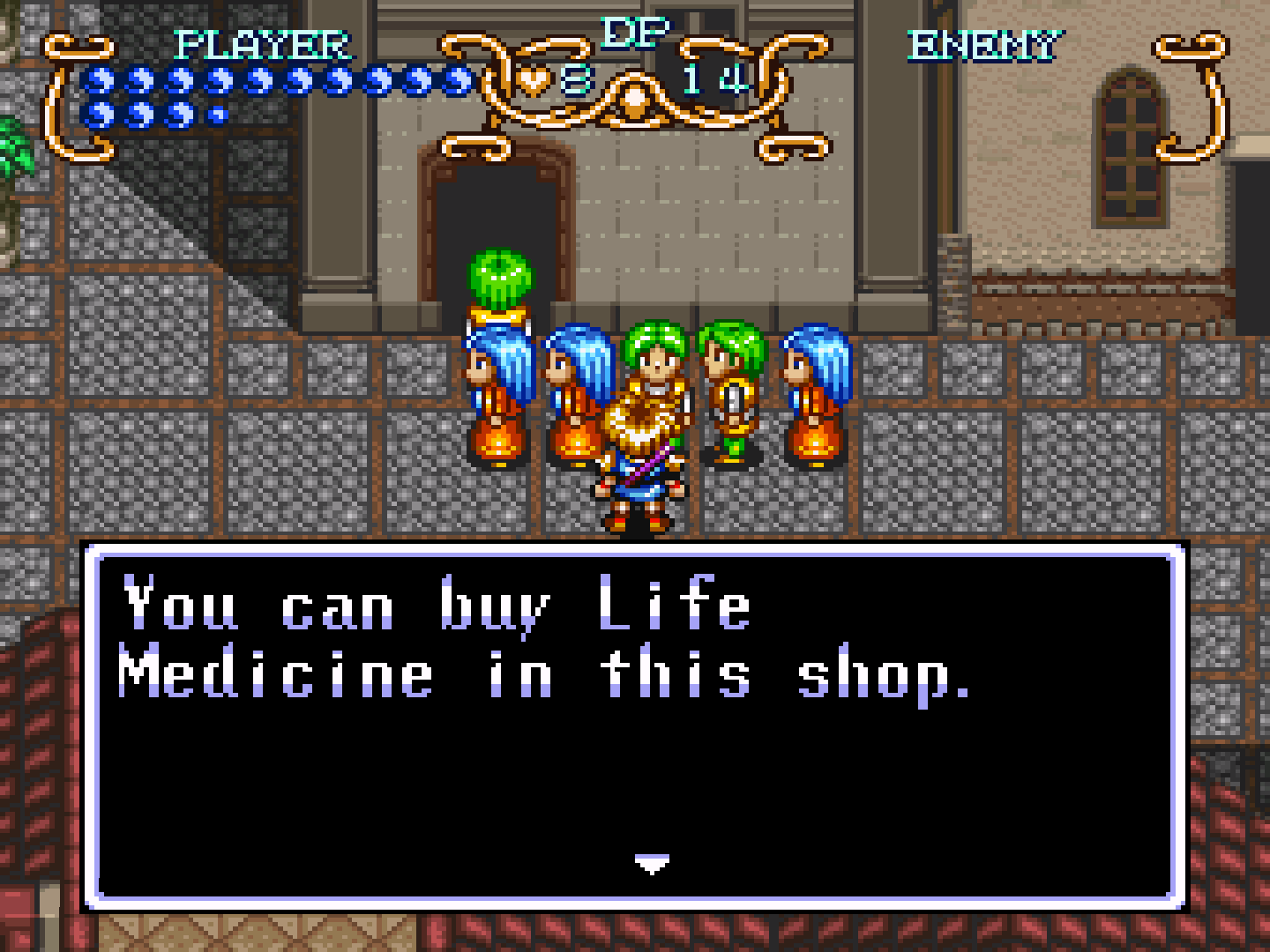 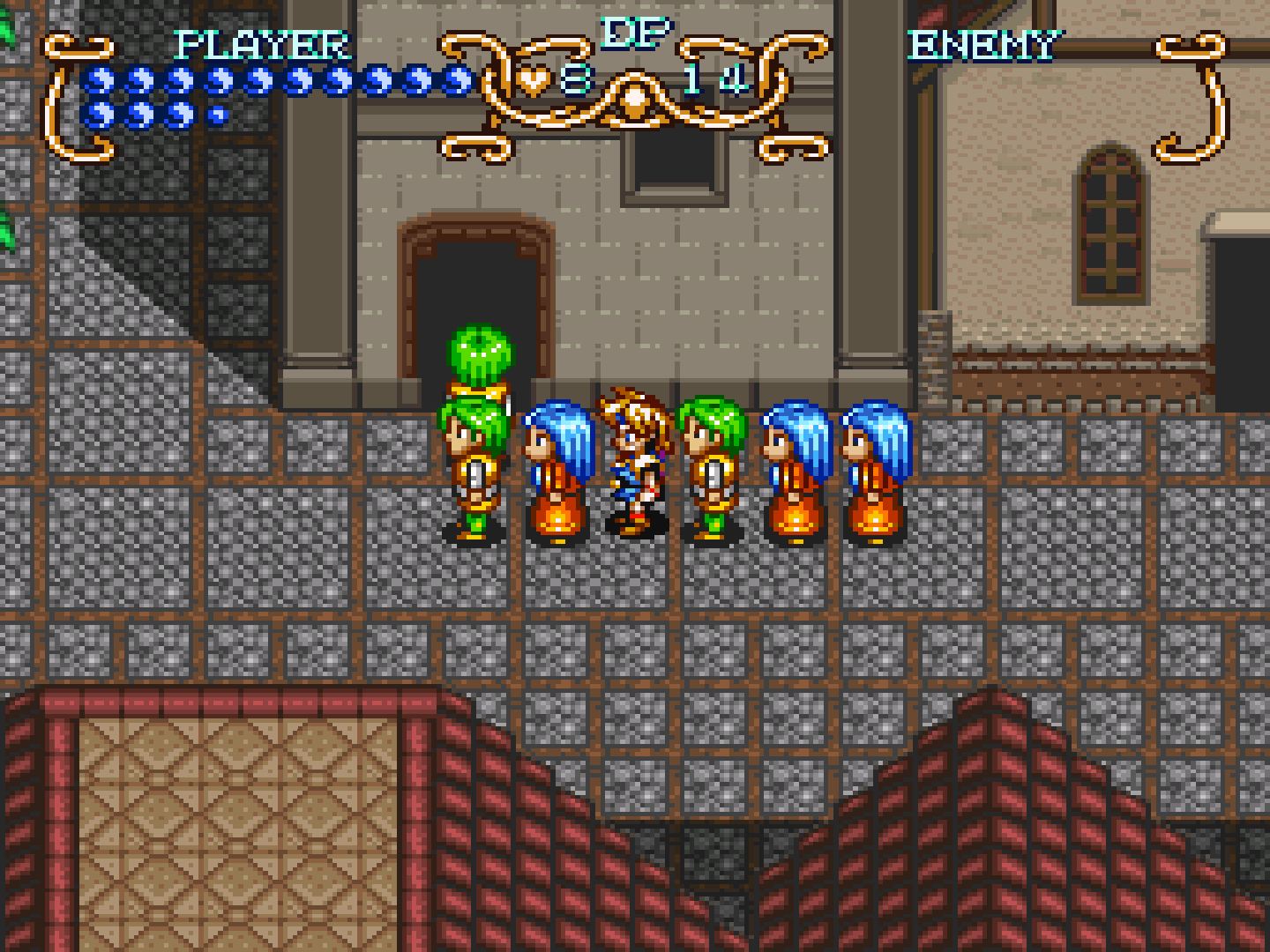 I wonder who thought of adding in this feature in the game?

Let's hope the waiting was worth it...

As we enter the shop, one of the clerks asks us something.

Clerk: "Aren't you Neil, from this village? Rolek manages this store too."

She tells us to get whatever we need without paying. Yes!

She follows Will around... 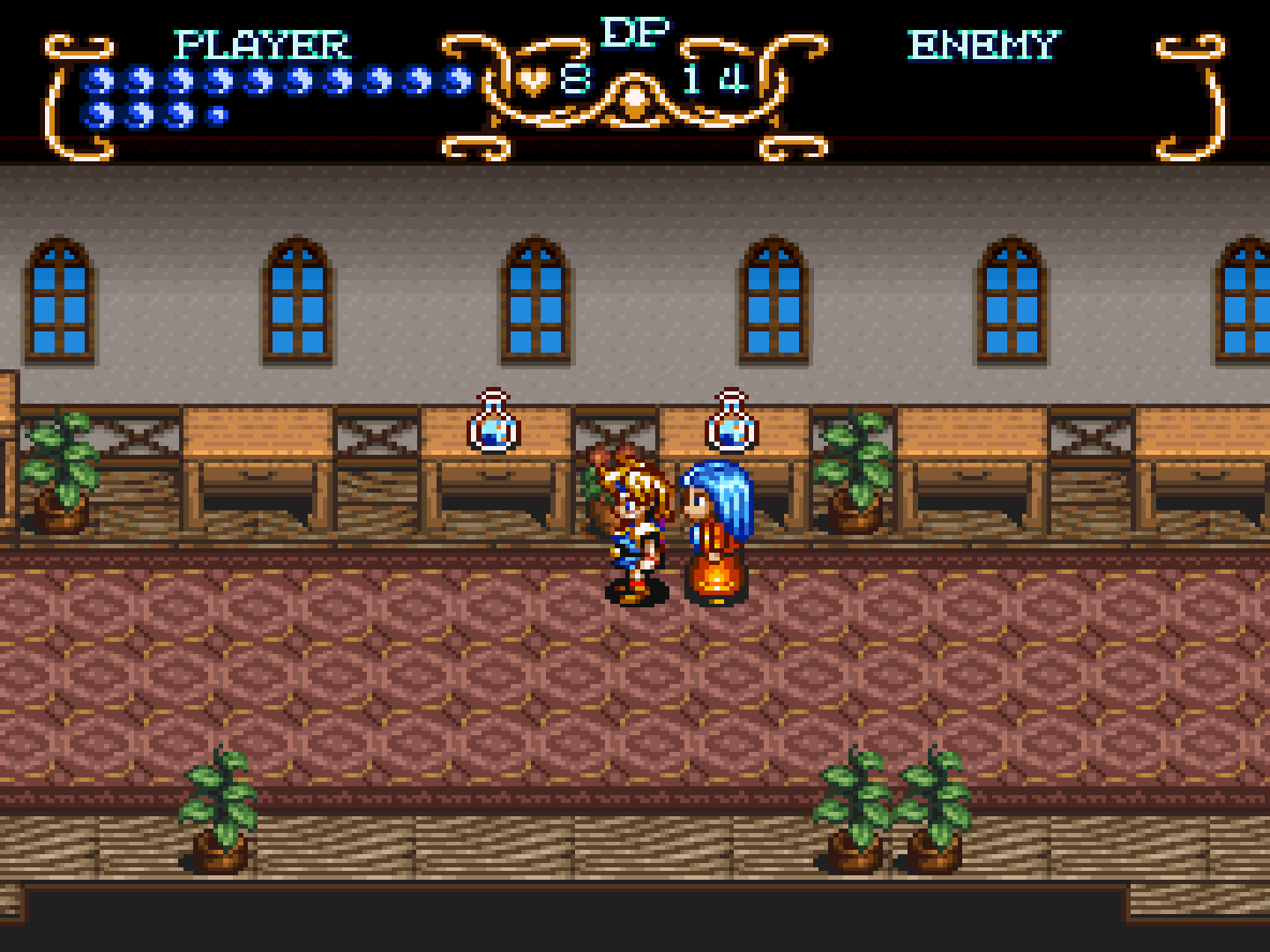 There's two potions in front here. But which one is the Life Medicine?

I have Will drink the left potion. It's the Life Medicine!

Will: "That taste makes my mouth pucker."

And we get a health boost!

The potion on the right is Dark Medicine. I have Will drink that one too.

The potion smells and tastes foul!

However, Freedan gets a boost in his powers!

In a house on the west side of merchant's row, a blue haired woman points out hearing "groans" coming from the "luggage" that the Rolek company delivers.

We head next door, on the far left, where the Rolek office is.

One of the men wants in on the business, saying he "can get anything [he wants]" by working for them. 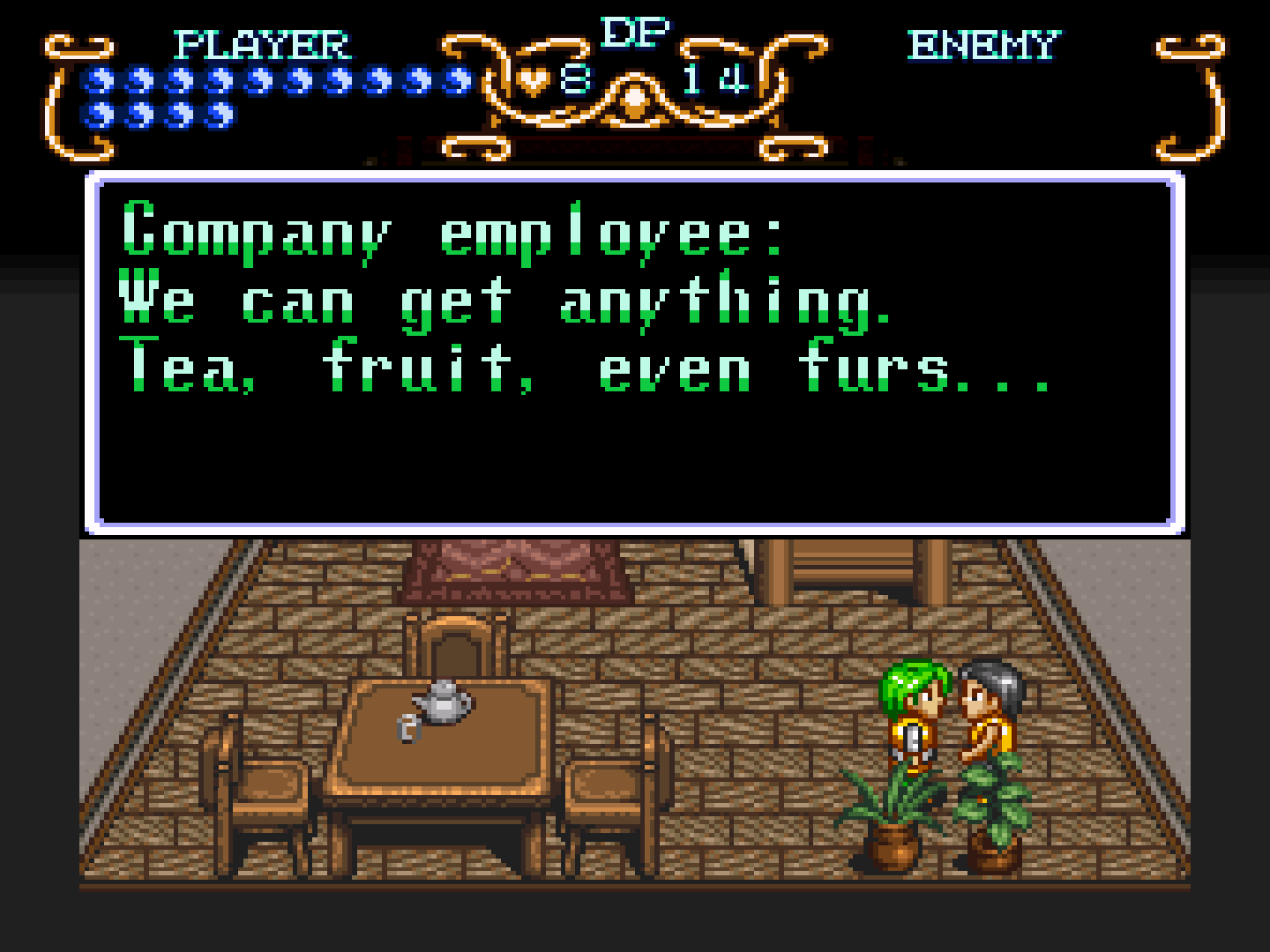 The employee confirms it, but he's "not allowed" to mention that. Oh my god...

We go talk to them. The employee shoos Will away because he's a kid. Ageist! hiss

They're arguing about "true genius." 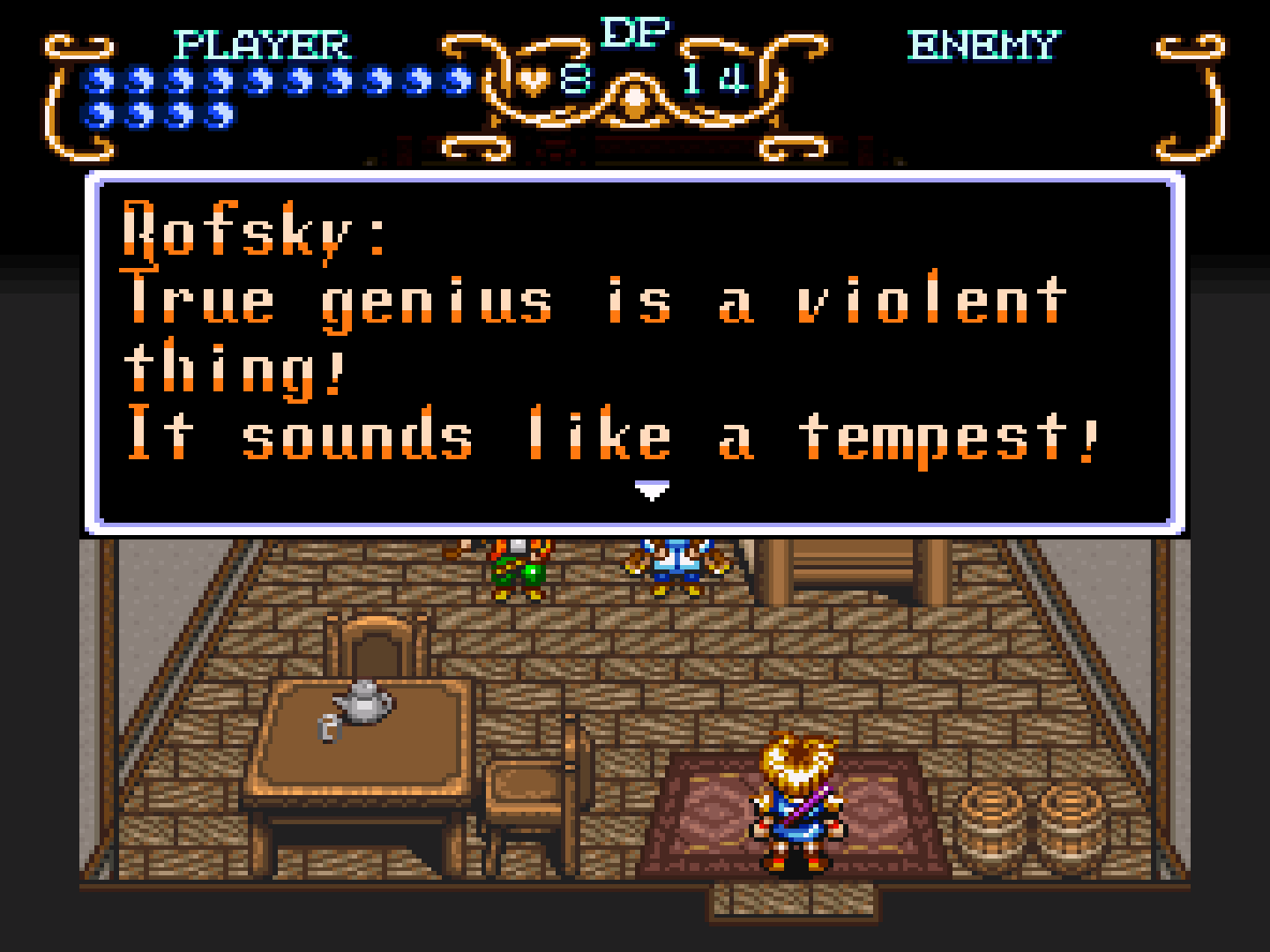 Rofsky is arguing about a teapot from Mt. Kress. 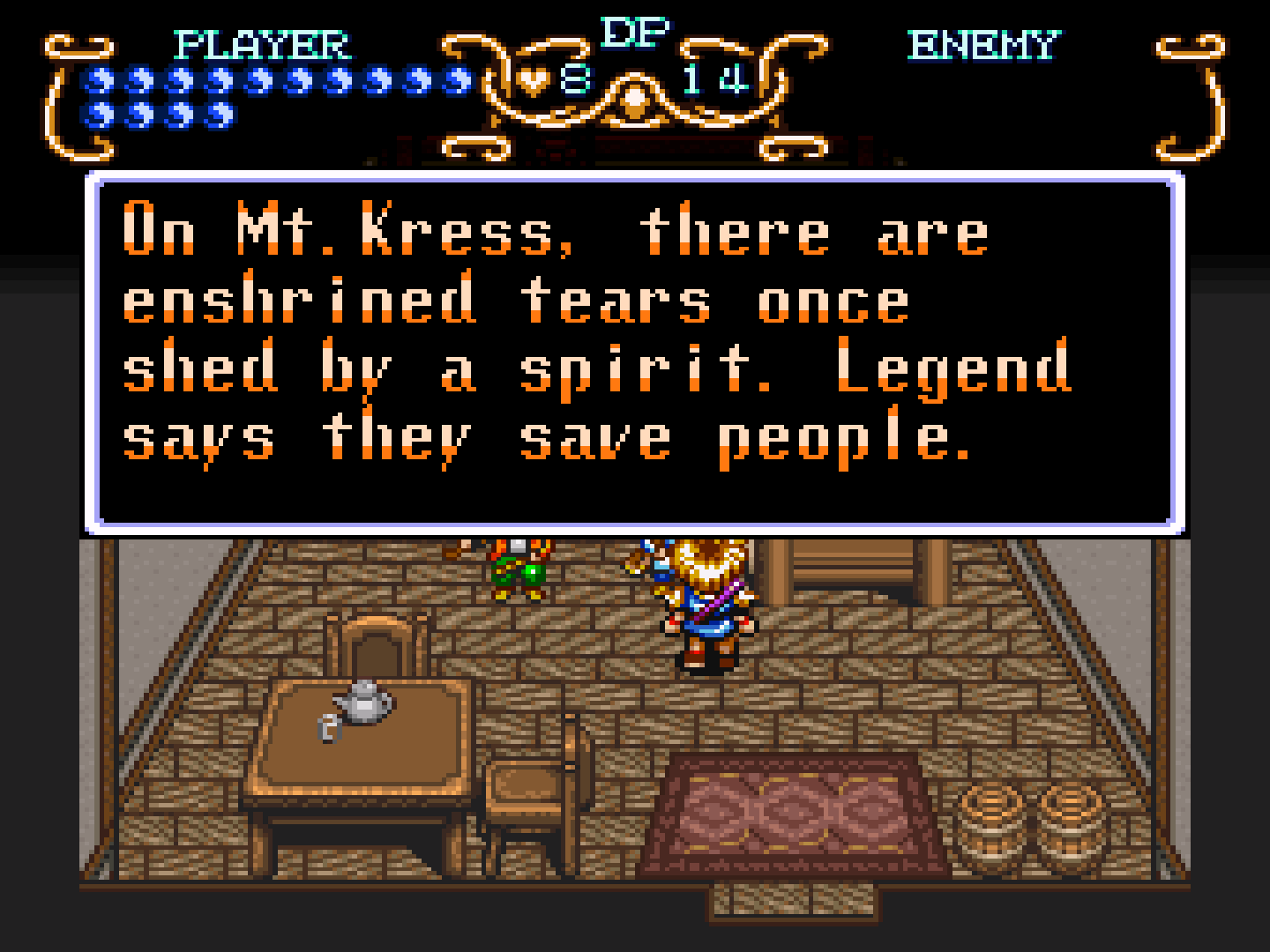 Erasquez senses a "strange power" from Will. 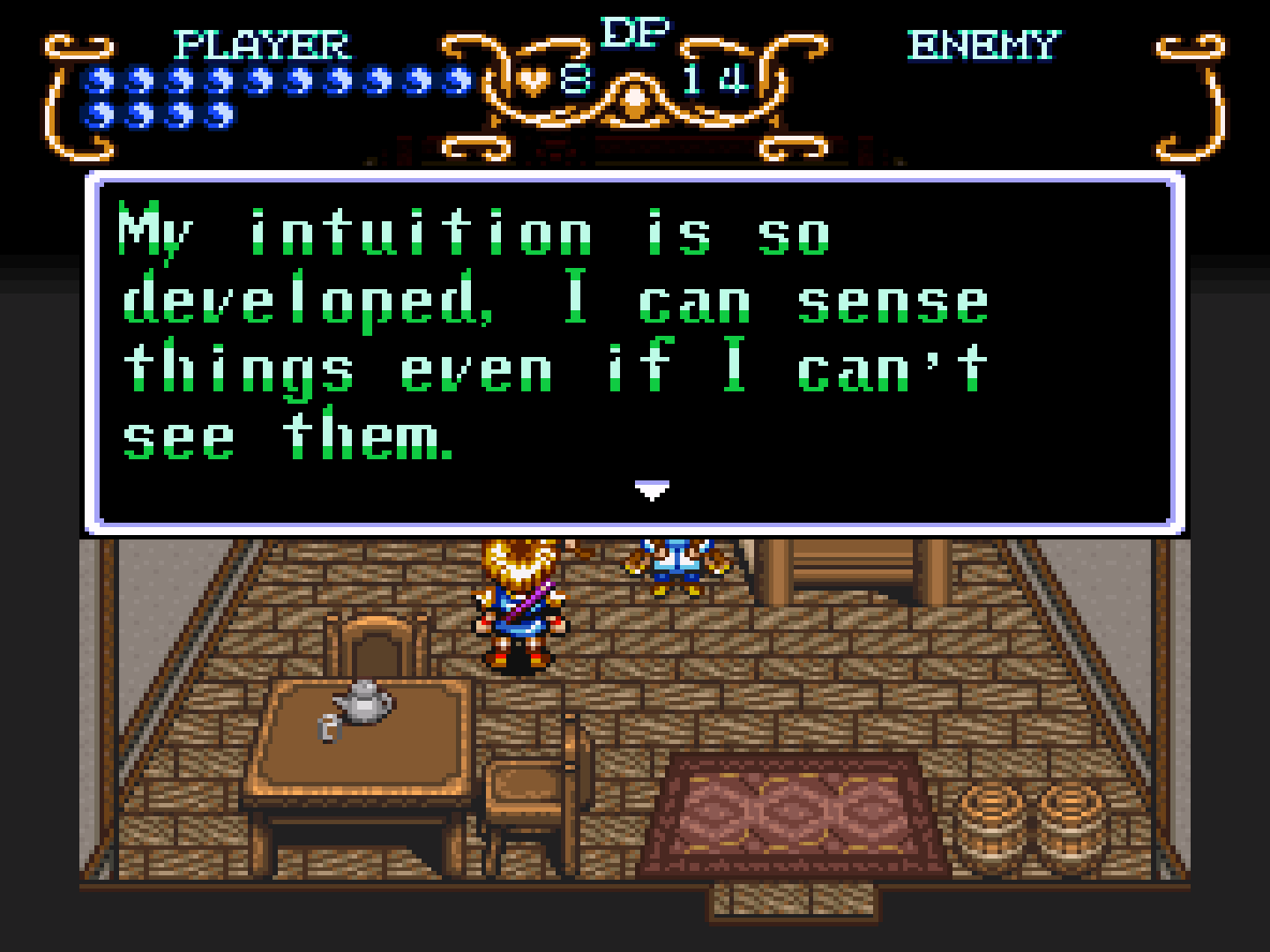 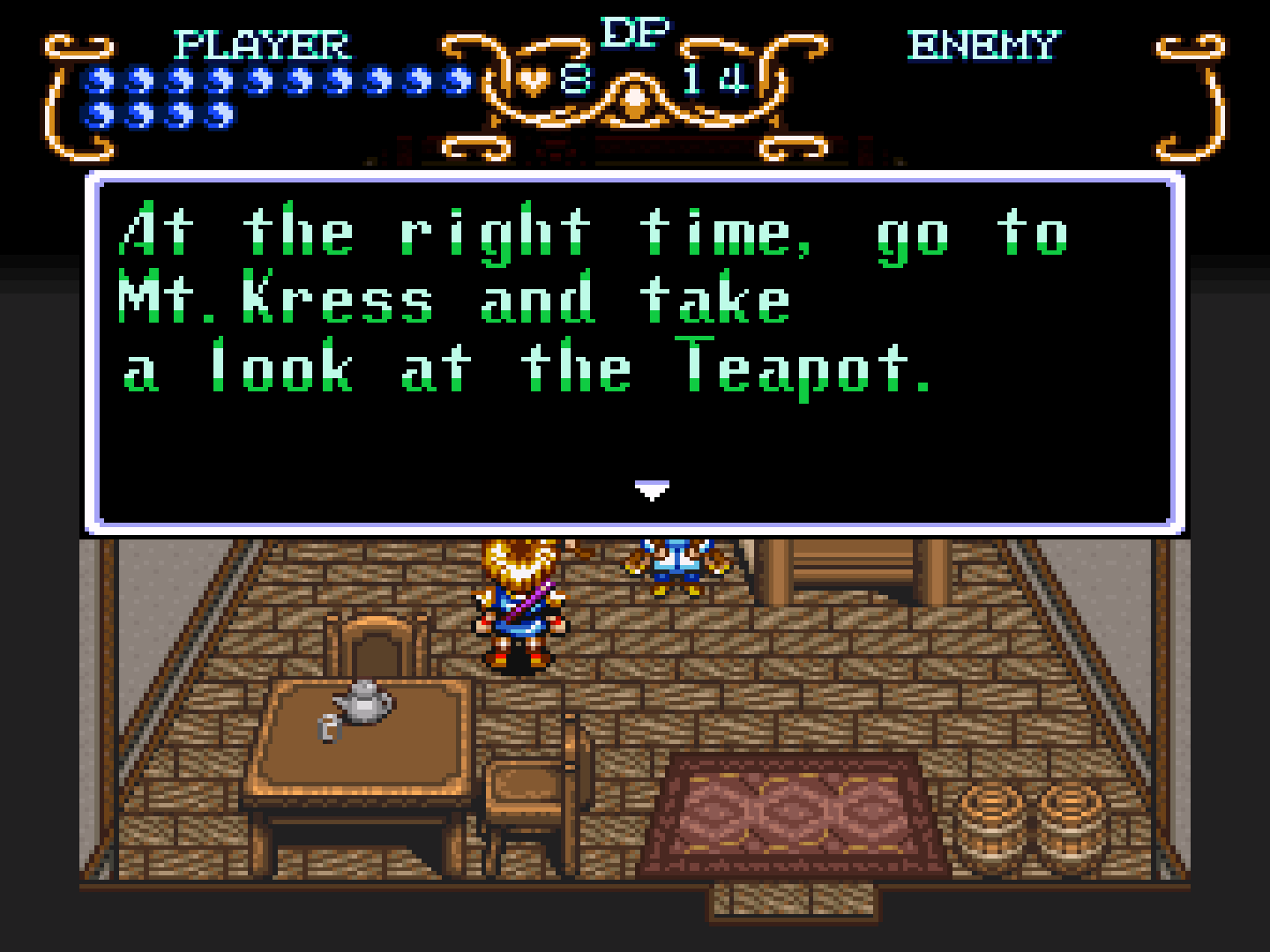 Now we have a new location to explore: Mt. Kress! 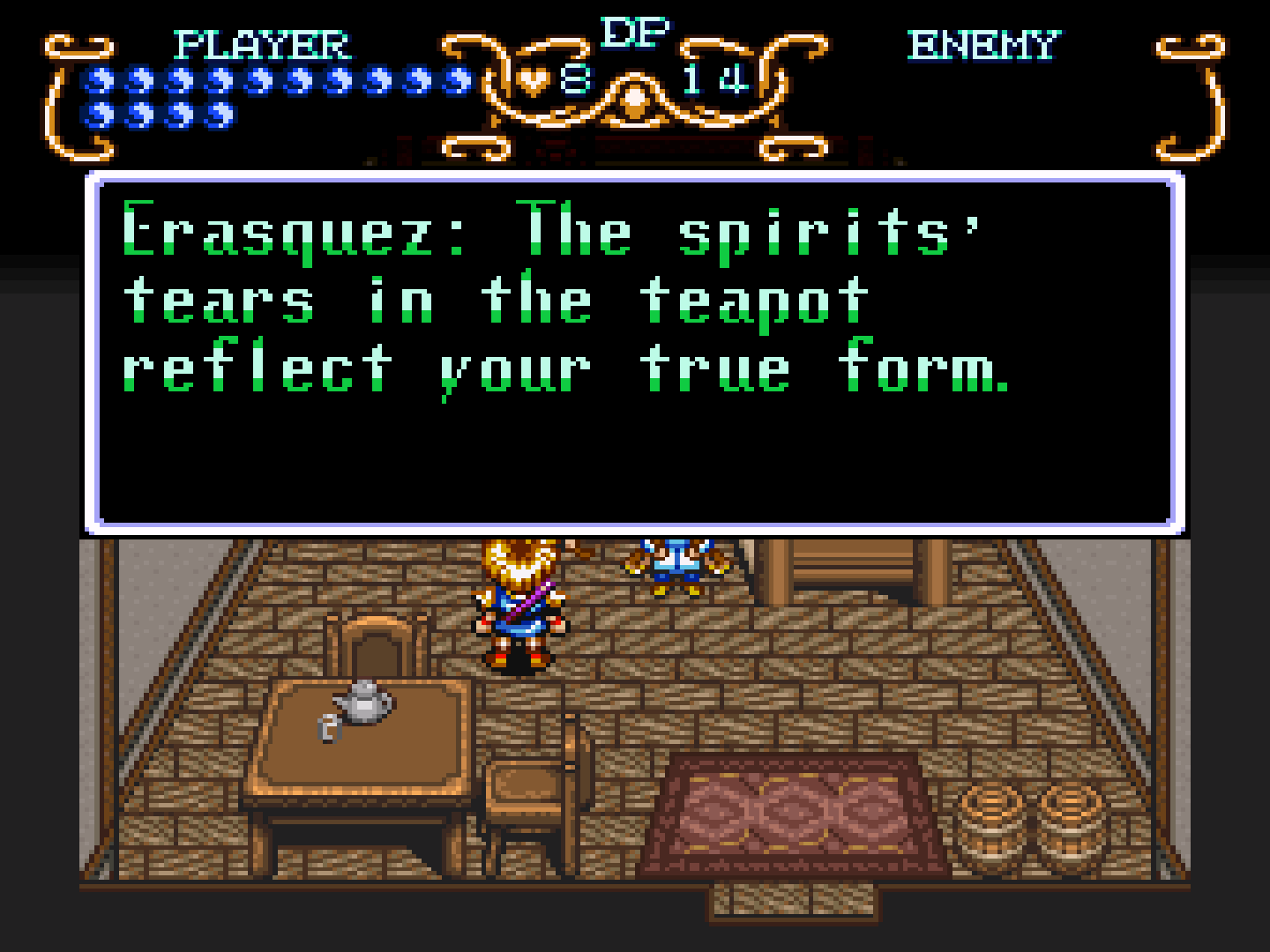 After that, we head back to the Dark Space portal and save! Whew, though it was short and covered only the city, tonight's session was still an adventure!