I have Will slide down the slides... 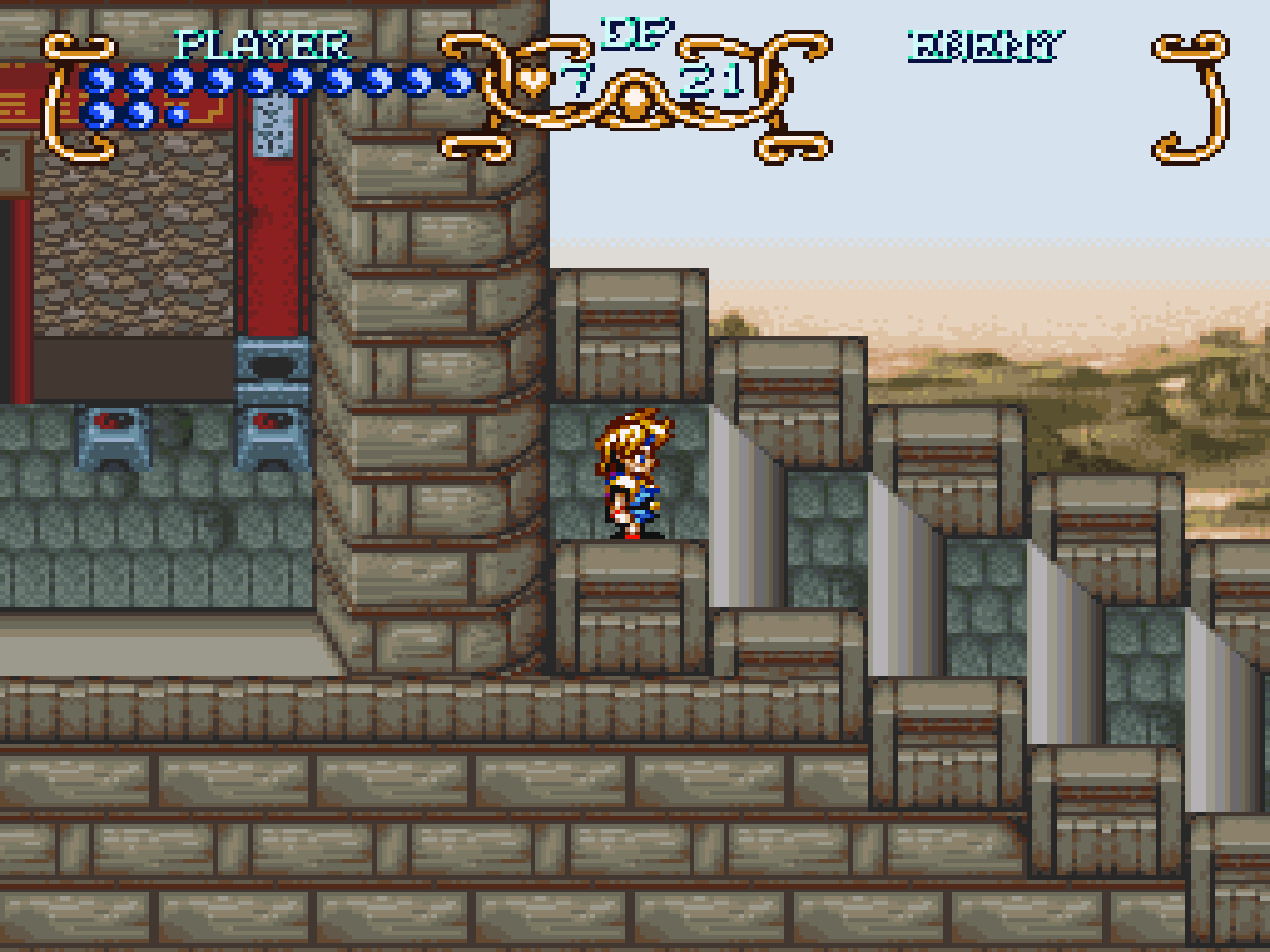 ...and proceed downstairs through the second passage.

These archers never give up, do they?

I manage to take care of them (and another snake) and press the button pushing the spear trap back into its place.

I have Will get a running start, and help him cross over a few slopes.

Almost leaping to the next area, I stop Will and turn back to go in one of the passages.

Unfortunately, two spear traps stop us, and we have no choice but to go back upstairs and move forward.

I continue going in the wall's passages, taking care of more snakes here and there.

It seems that we're just one floor below a Dark Space portal... 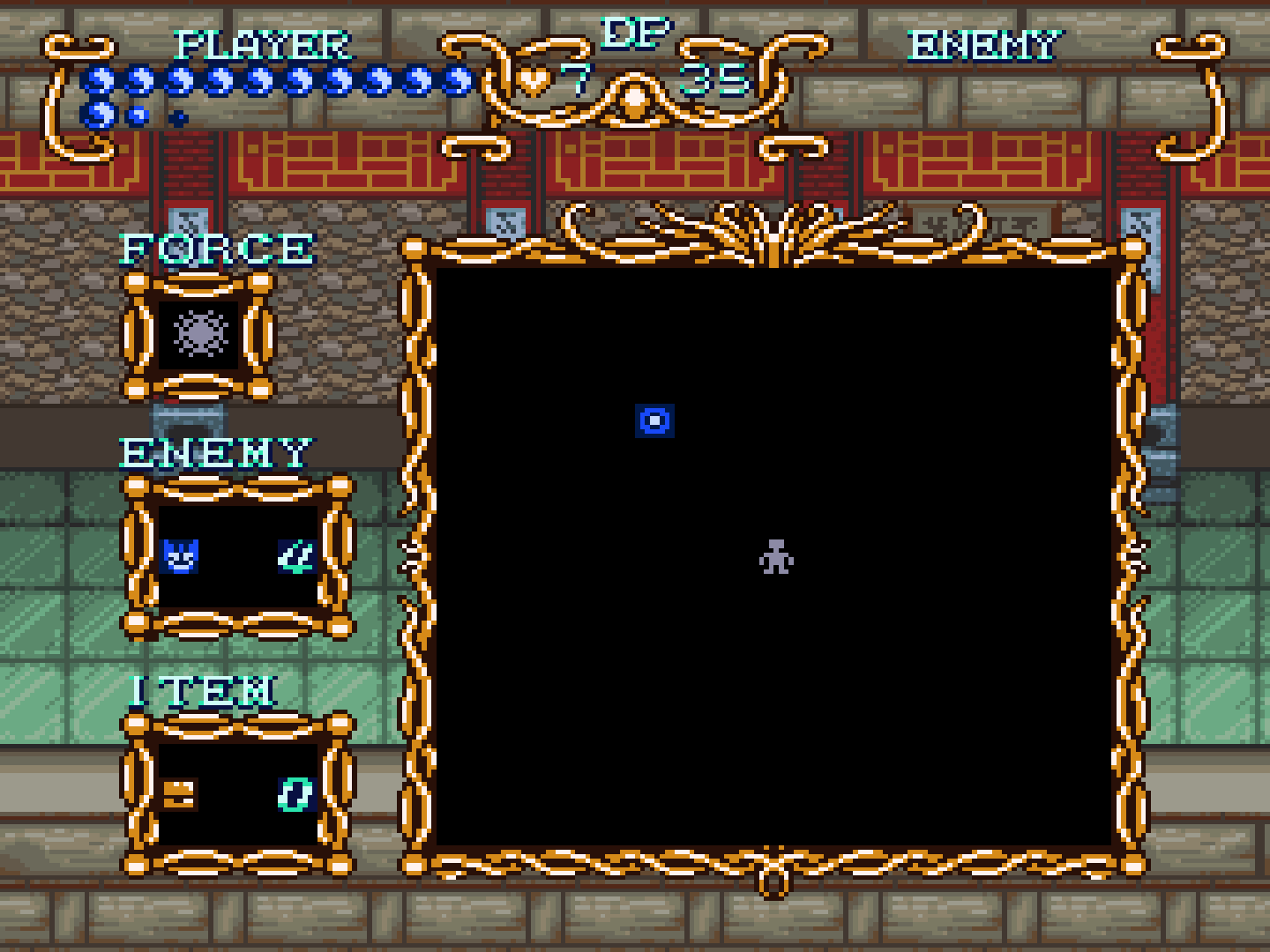 I take the next room upstairs.

There's a lot of ledges to jump off from in this area of the wall.

After looking around, I have Will jump off from the center part of the long opening below... 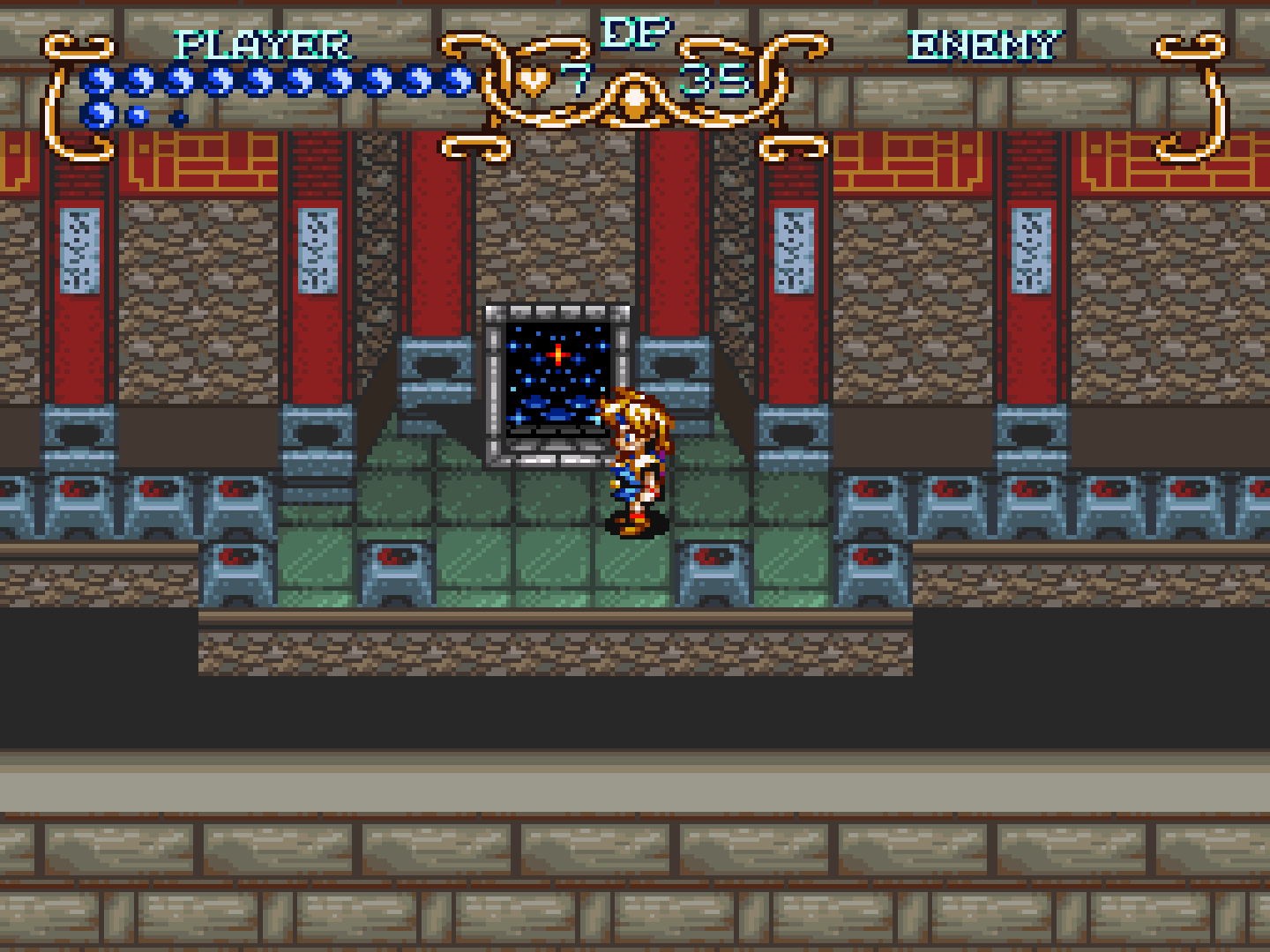 ...and into a Dark Space portal!

It seems that Will's getting a new power! 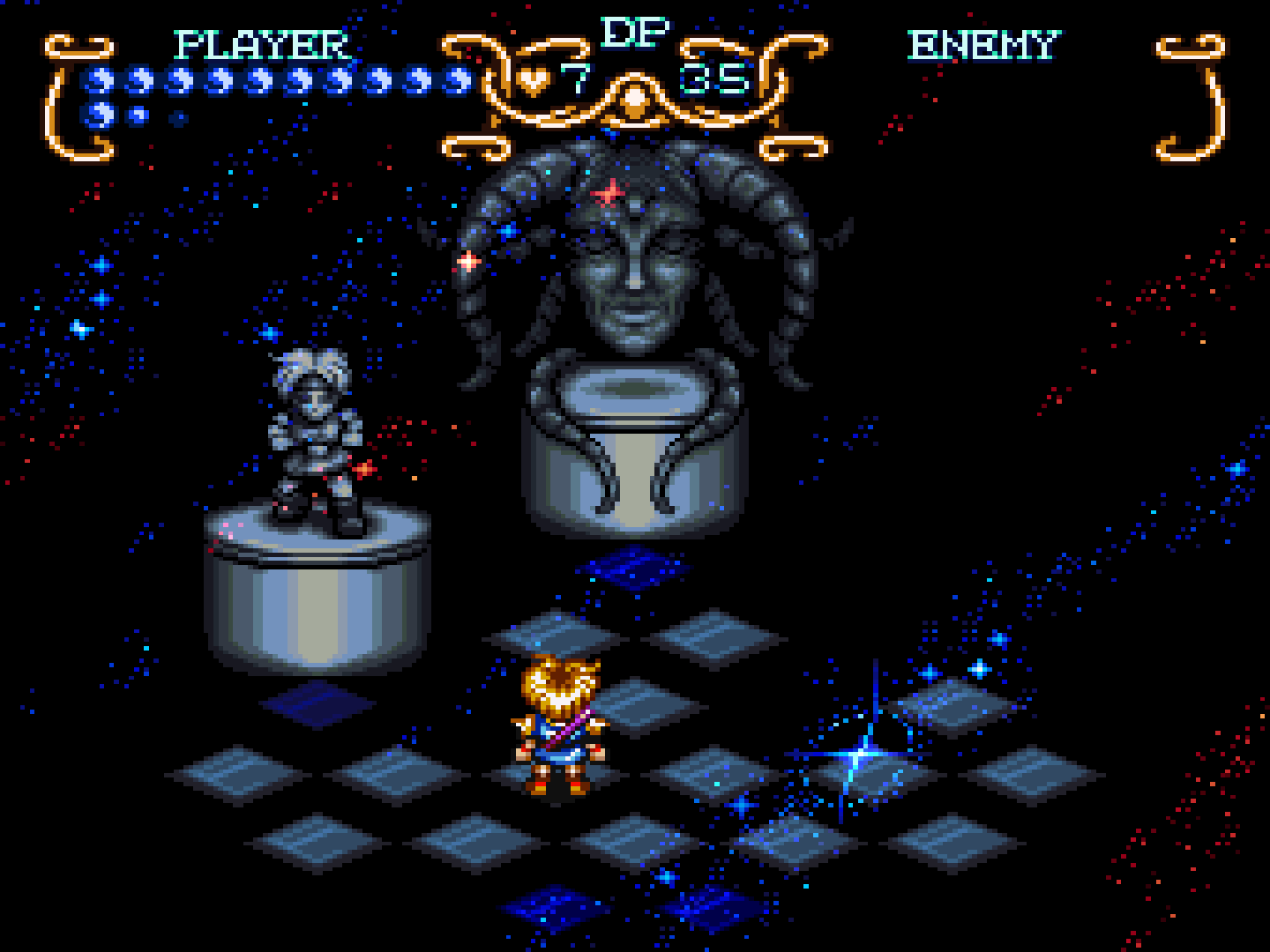 Let's see what the new power is...

It's a Spin Dash!

Gaia: "Spin your body to send enemies flying, and use the recoil to climb hills."

Now we can go back to that area with the slides easily!

I can use the Spin Dash by pressing A and "the LR buttons."

Gaia gives examples on where to use Will's new power. Specifically, around the wall...

I save before going back to the previous area.

It's a bit tricky to use the Spin Dash.

A bit frustrated, I look at a guide on how to perform the move properly. I have to hold A to charge, and then hold L and R while holding A.

Here are some of my attempts to take pictures of Will spinning around. 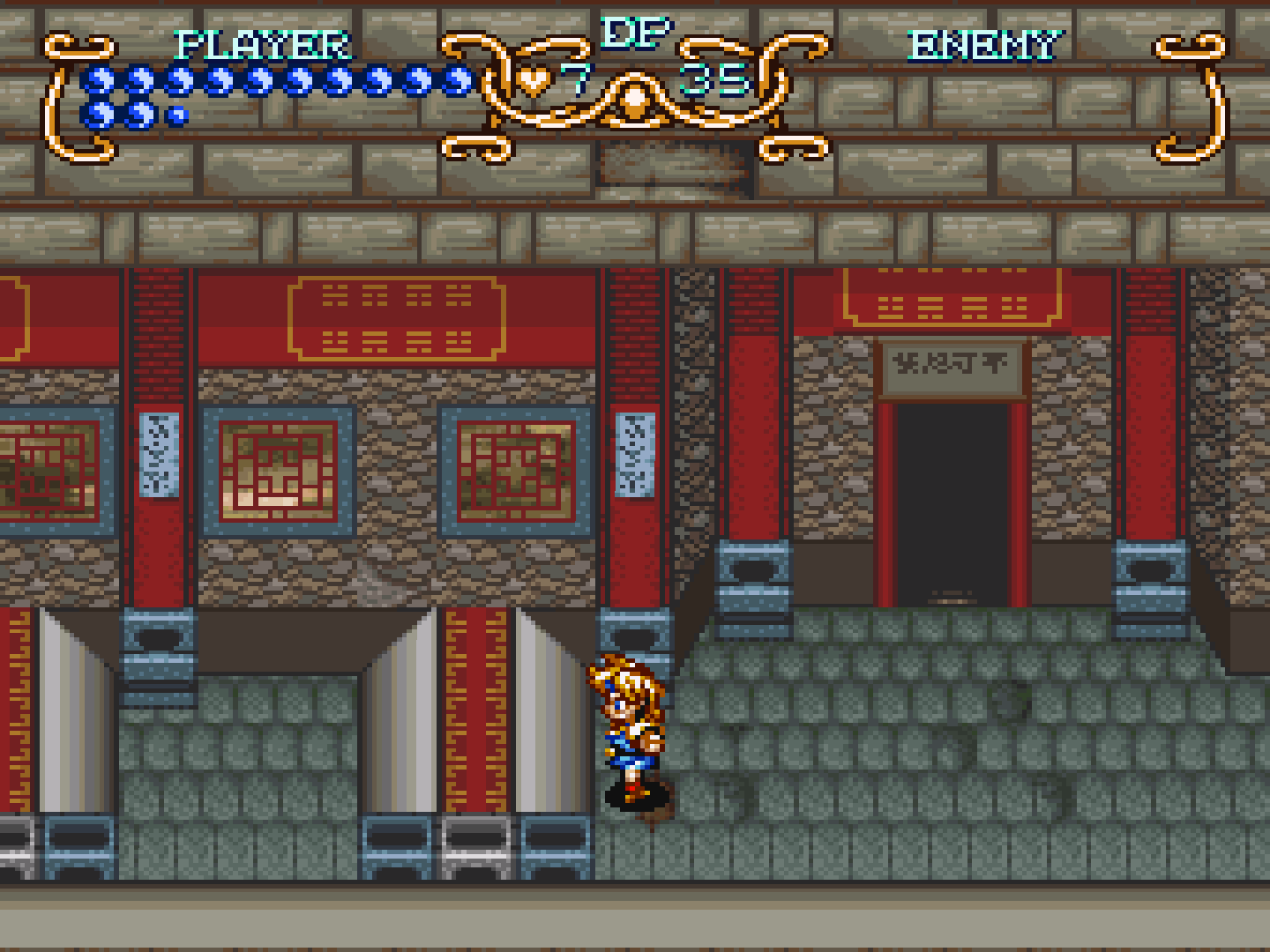 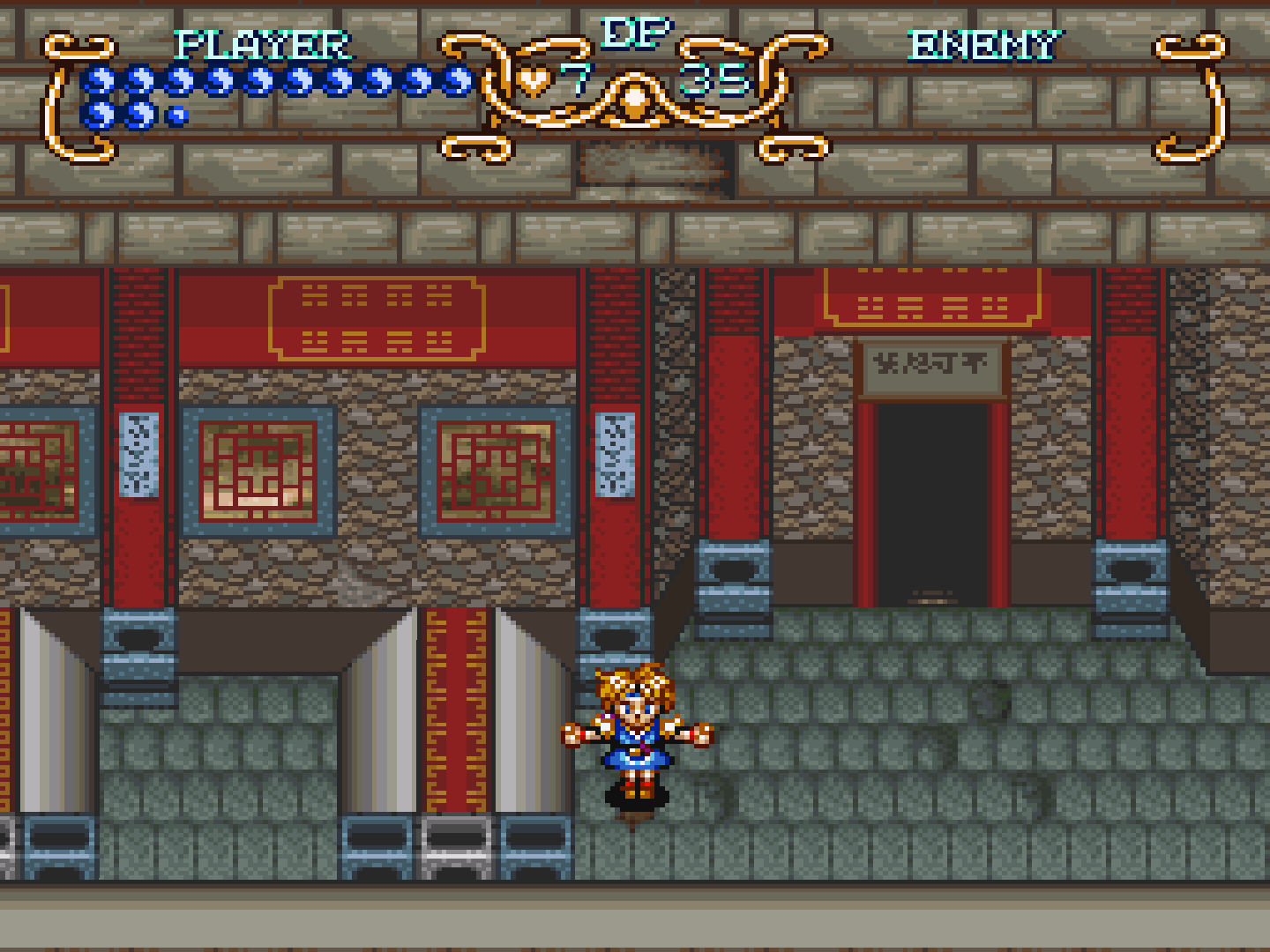 Ah ha! I managed to do one!

I practice some more with the Spin Dash... 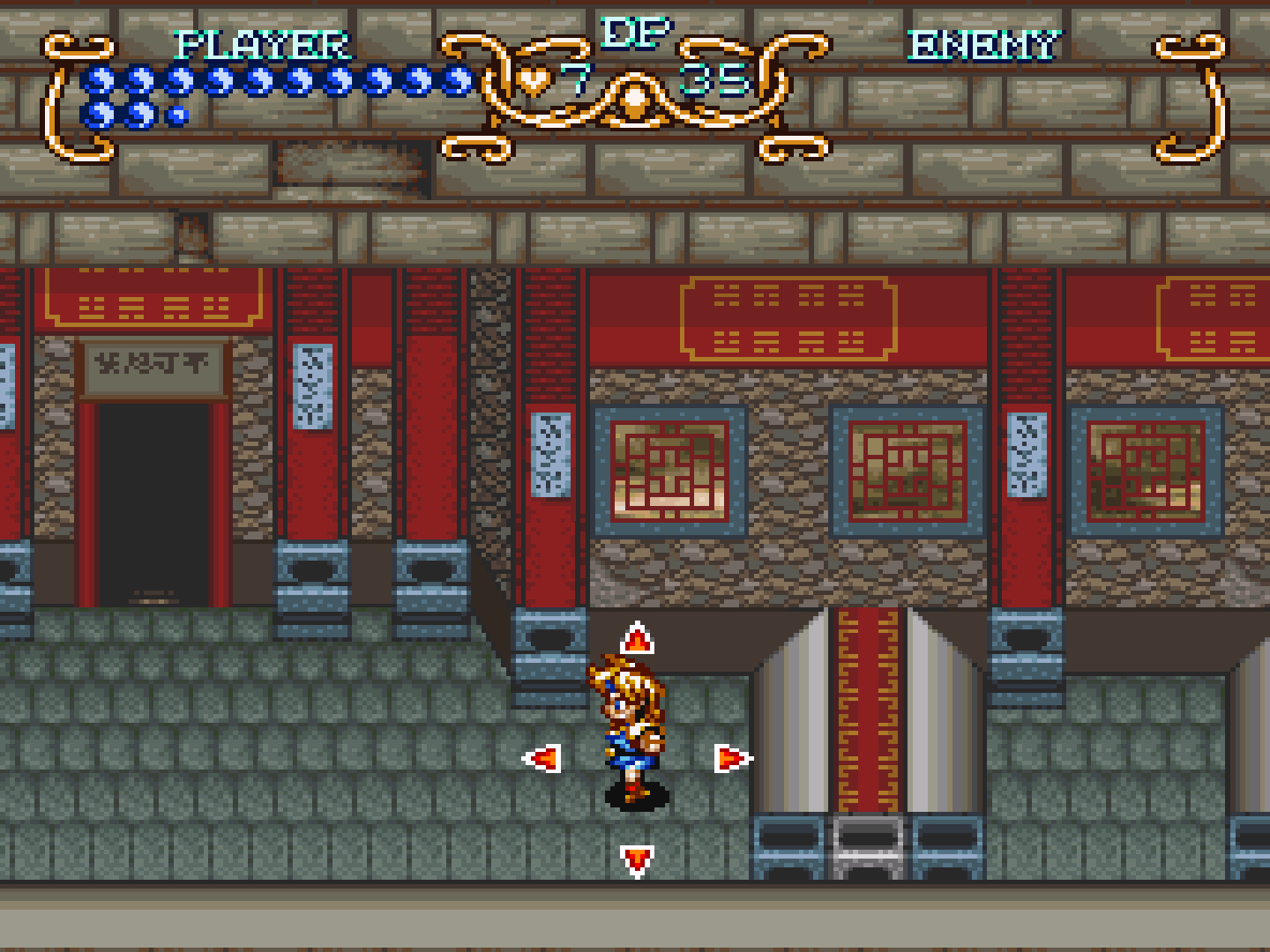 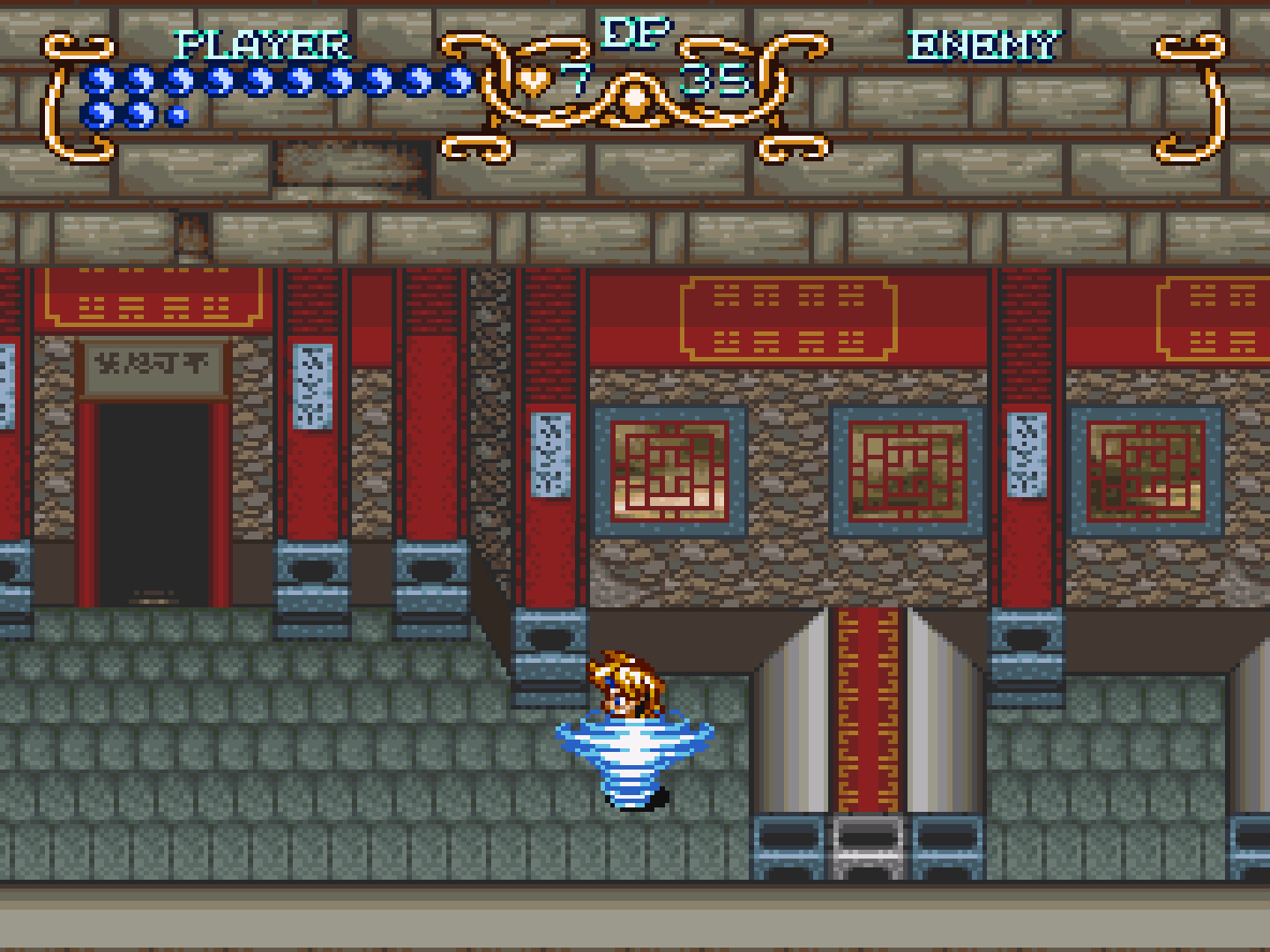 After pressing A, I press either L or R, then I switch between L and R, and keep doing it until Will forms a tornado and directional cursors!

This is one of the most trickiest moves in this game!

I move downstairs into the third stairway.

I proceed further down after more cleaning up.

More spear traps to switch off! It's all a matter of reflexes with this area now... 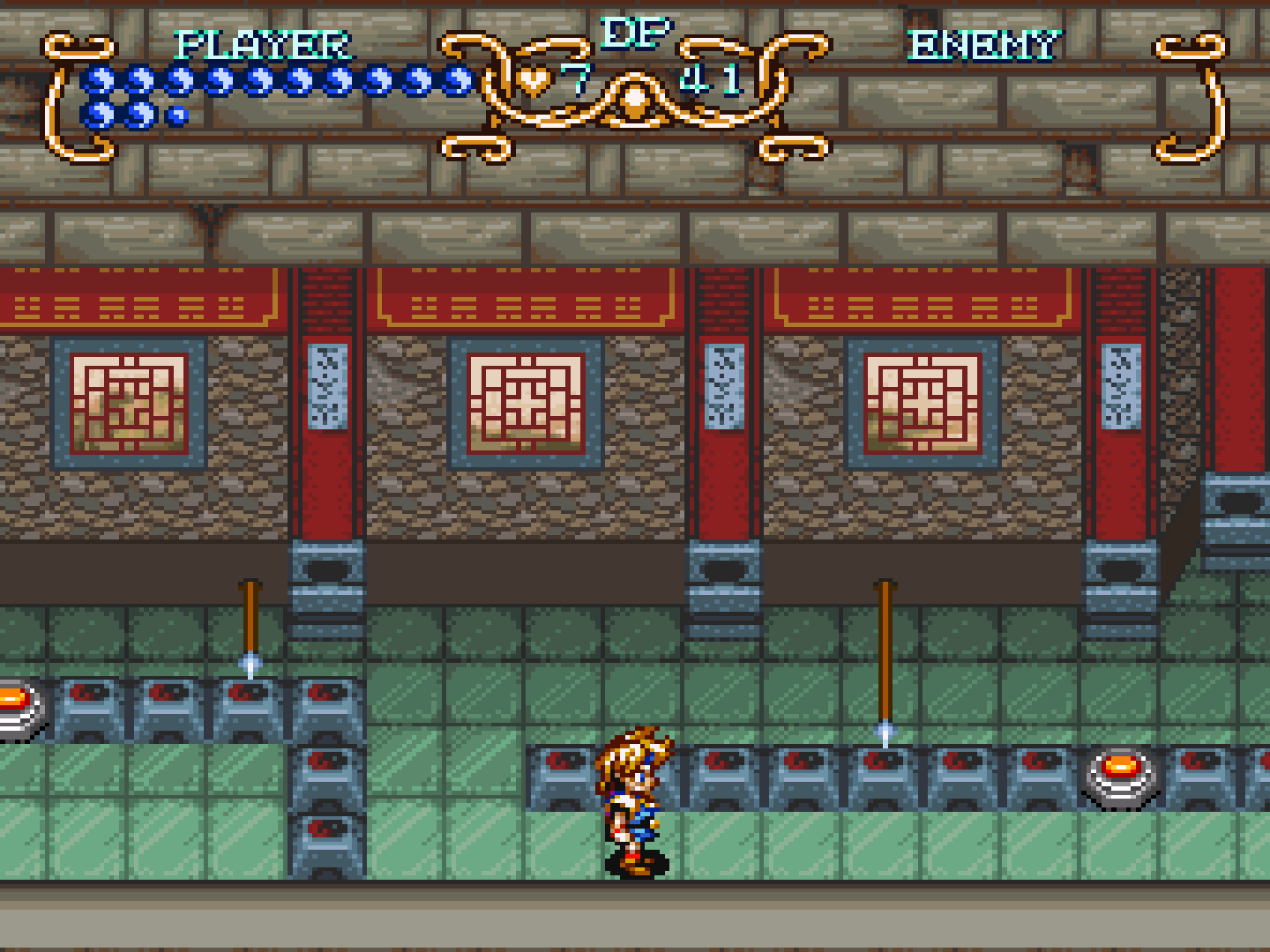 I give up, and go to the east part of the hall, where a fleet of willowisps await.

Unfortunately, Will falls victim to a snake's pounce as it clings on to him!

I was right to keep distance away from them!

I go back to the spear trap part of the hall and quickly slide past the second spear after switching it off. 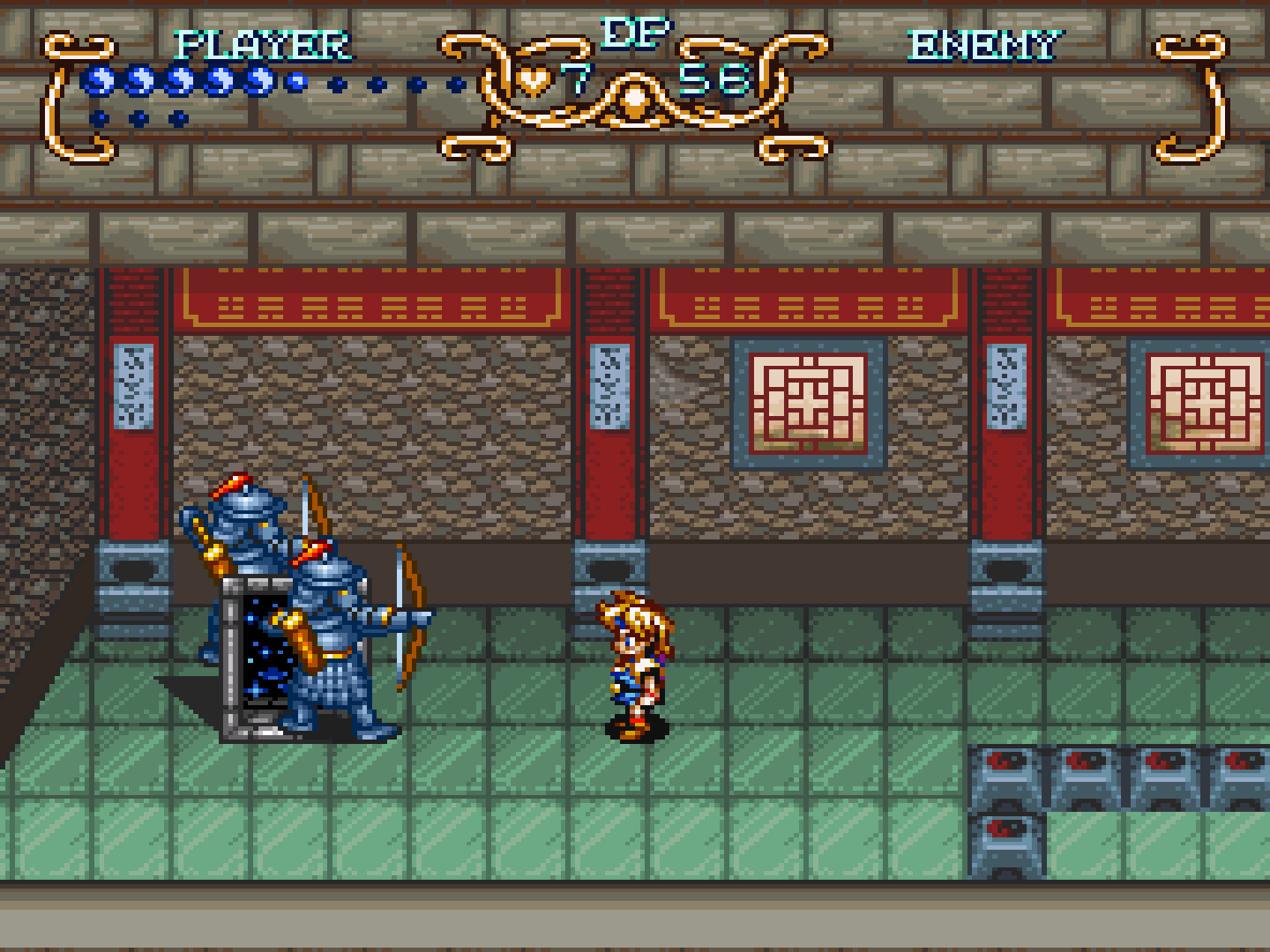 ...and another Dark Space portal!

As a prize for clearing the area, another health boost!

It's relieving to see Freedan here...

I go back to the fourth area of the wall.

After taking care of more snakes, I go back up and jump down the ledge, ending up surrounded by two archers!

I have Freedan escape down the ledge back to the other Dark Space portal.

After saving, back up and back to the archers, who are no match for Freedan.

The fifth area has 12 more enemies. When will this level end?

We can't go inside the stairway here.... 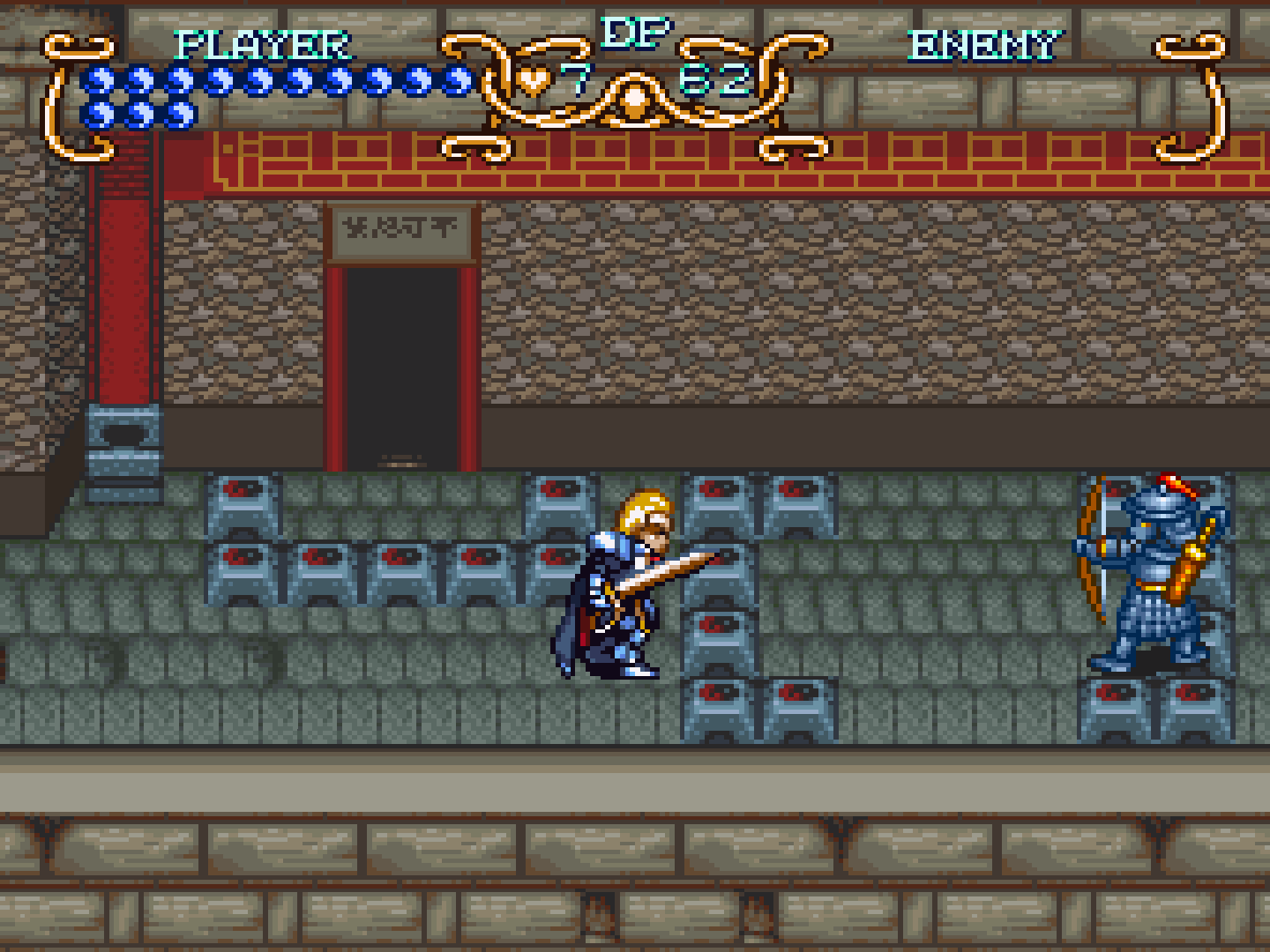 After the archer's done... 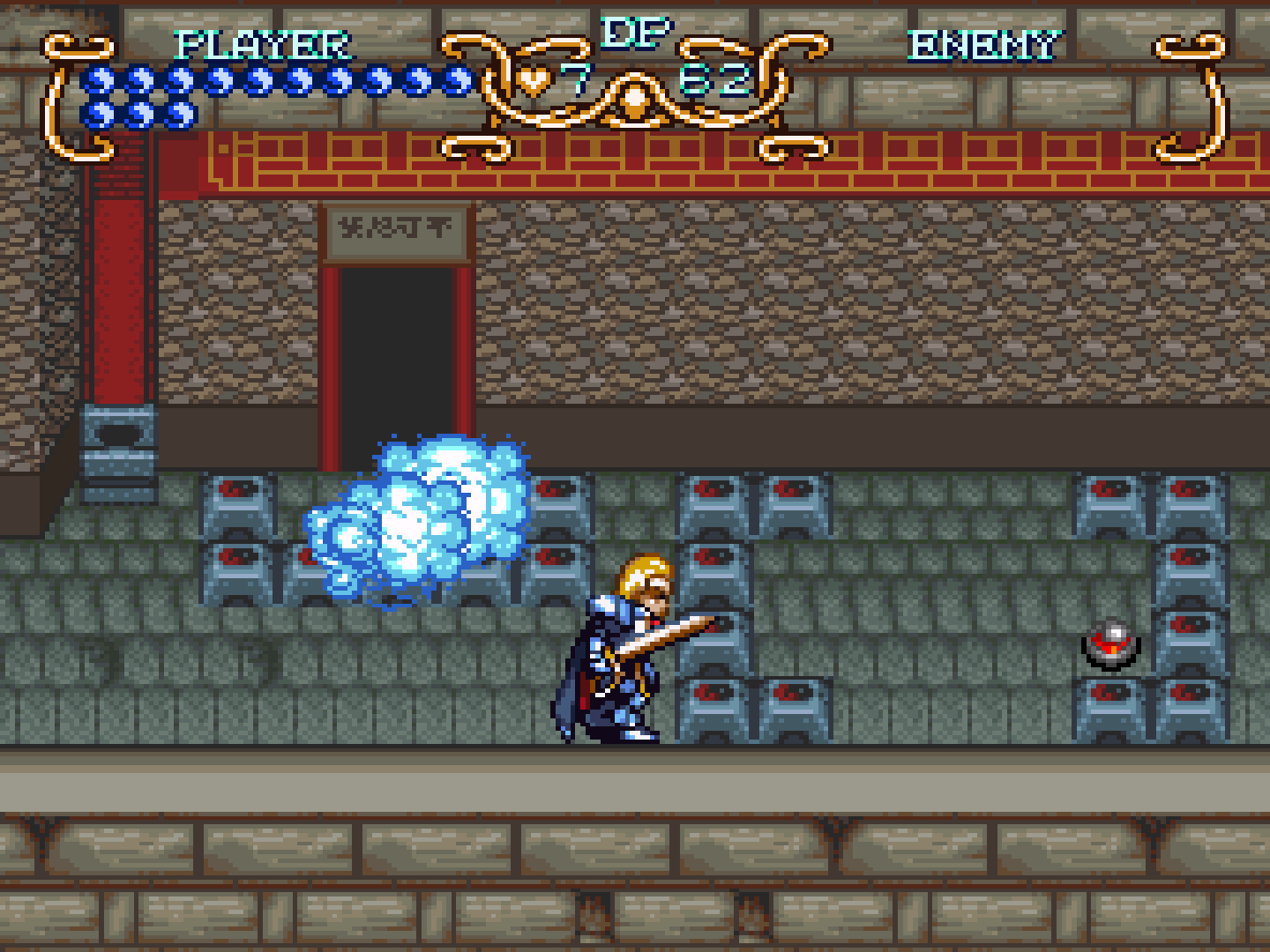 The willowisp here runs away through the wall...with a quartet of archers behind us!

Downstairs, we're faced with another puzzle, and another mini-maze! 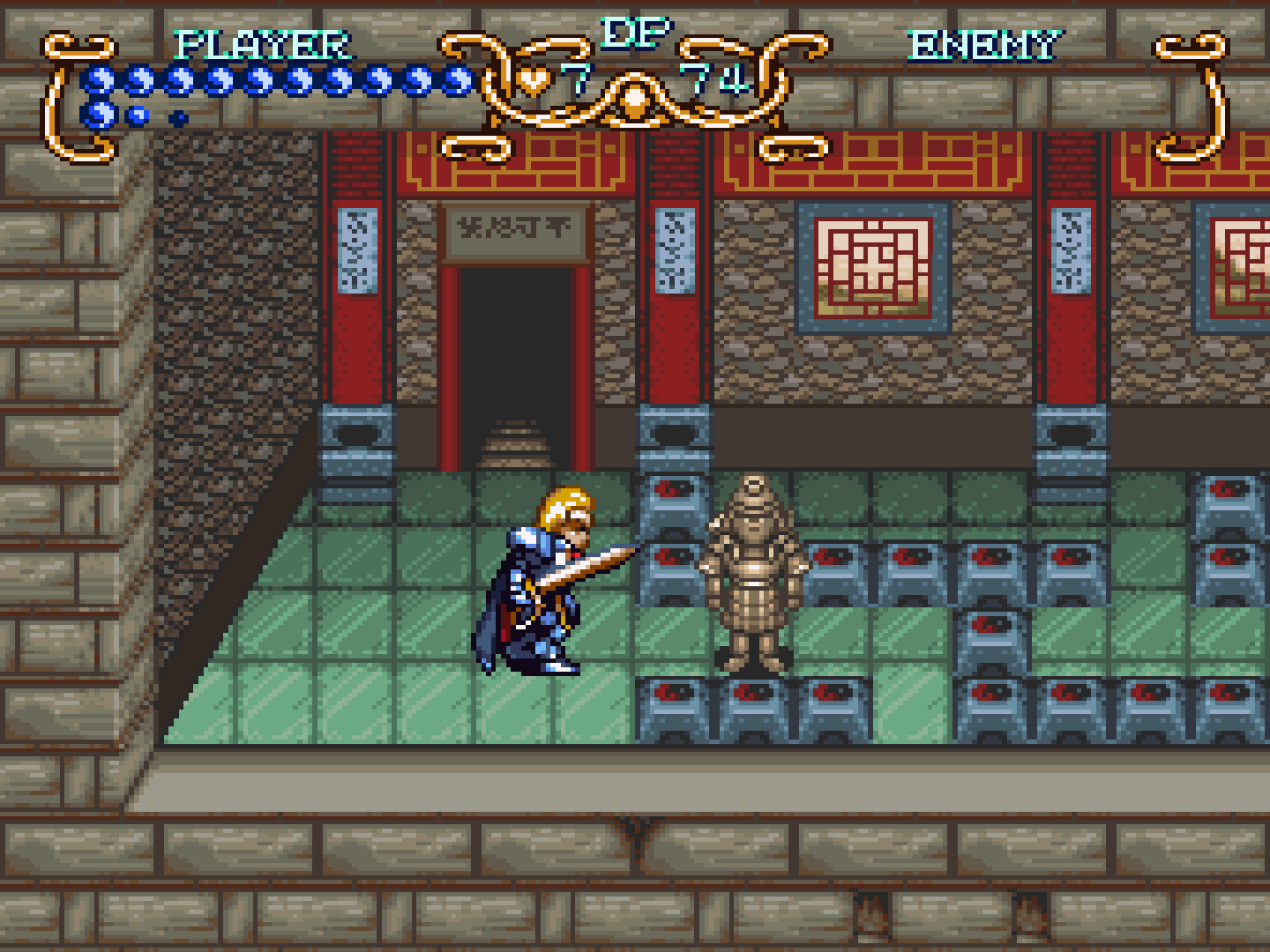 I move the statues blocking the way...

...until I reach a button near the next staircase!

Pressing it awakens the statues!

After a small battle with them, we go up. 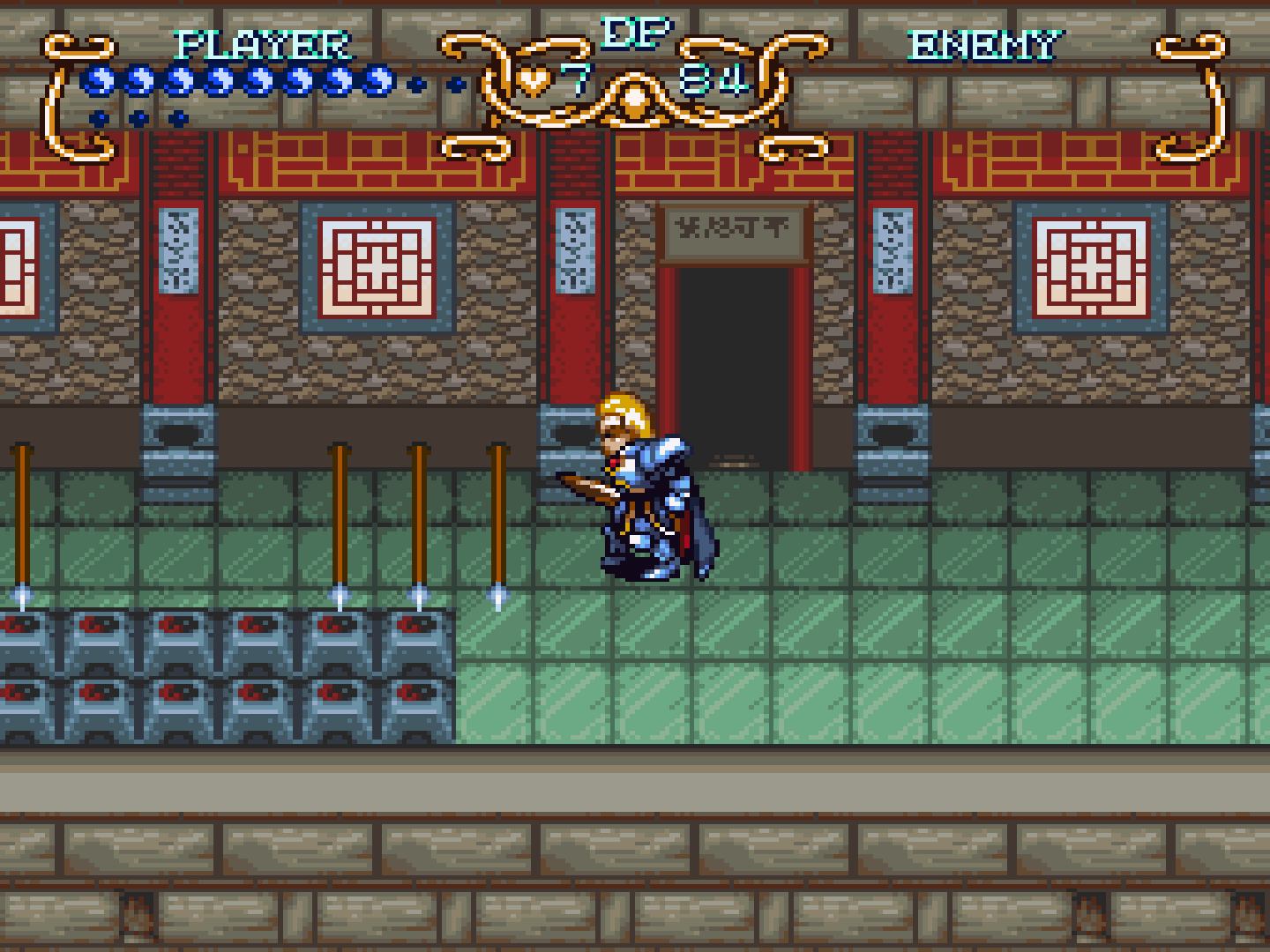 This game is getting more serious.

At the first stairway, I take care of the 9 enemies in the room, mostly those archers...

...and downstairs to another army of terra cotta statues! 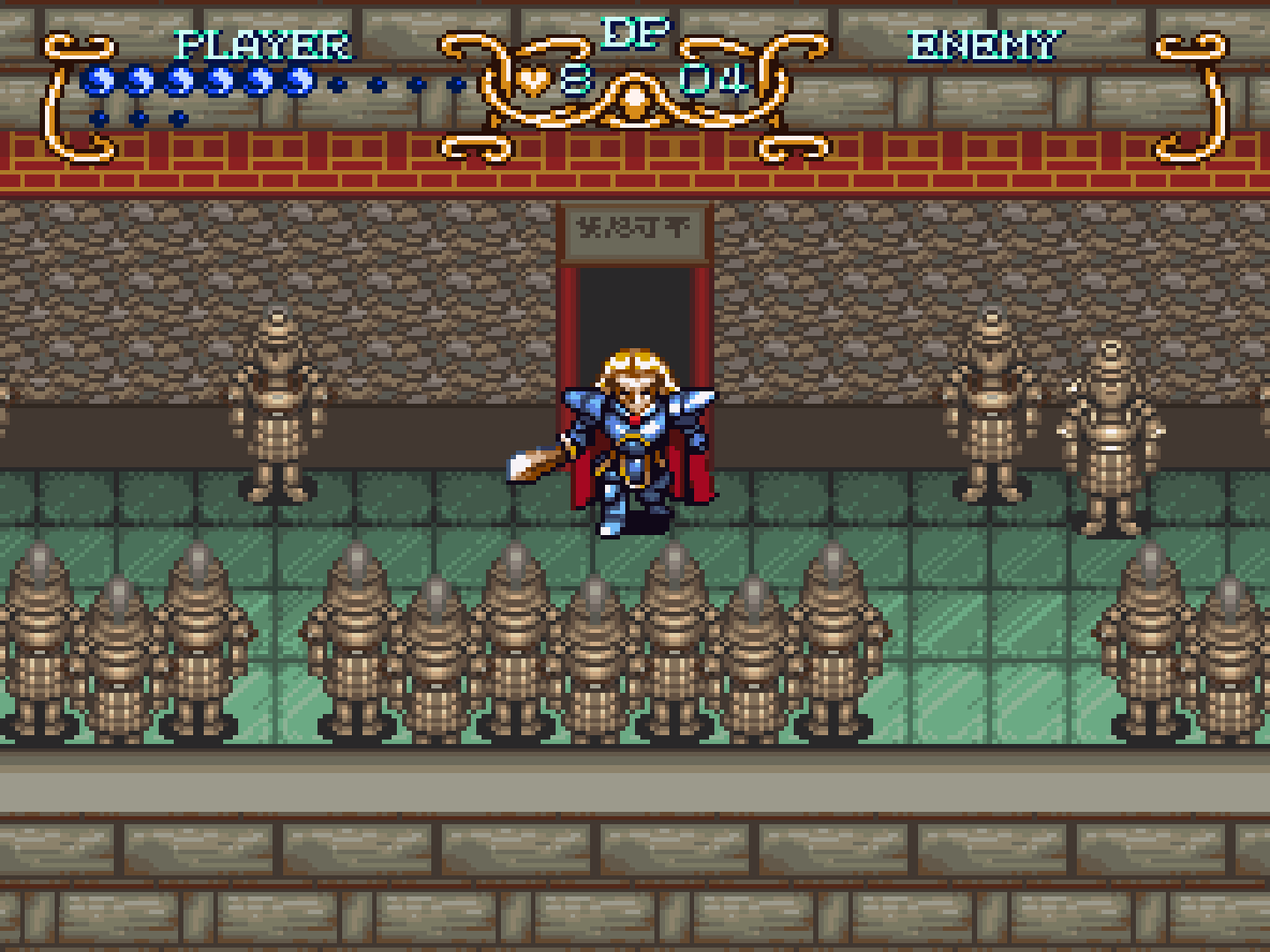 The remaining 6 are easy to spot, since the archers have glowing eyes.

A Dark Space portal appears after all of that work... 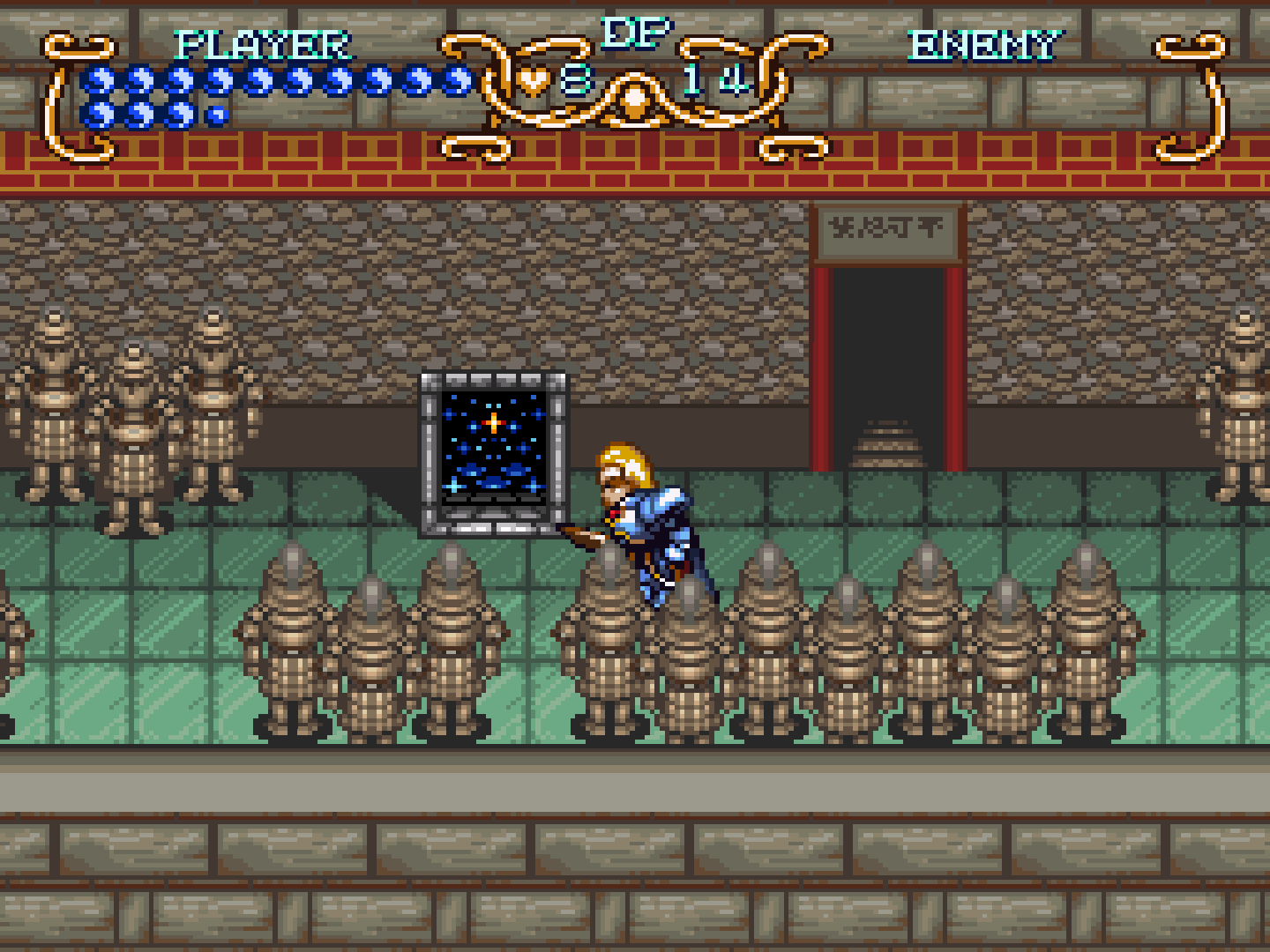 I change back to Will since we need to cross over that slope.

It seems we're at the end of the wall... 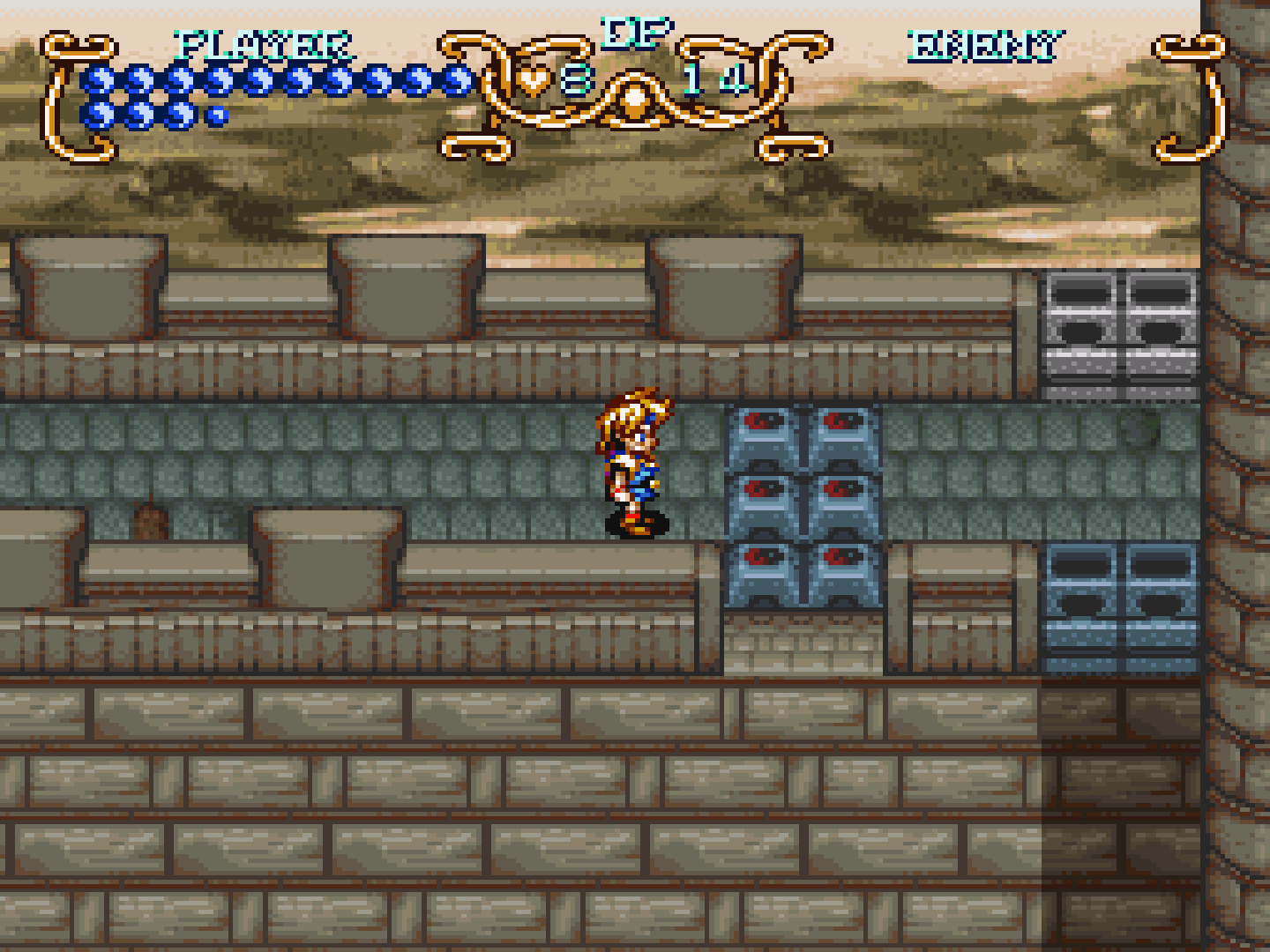 Looks like the only place left to go is down this ledge... 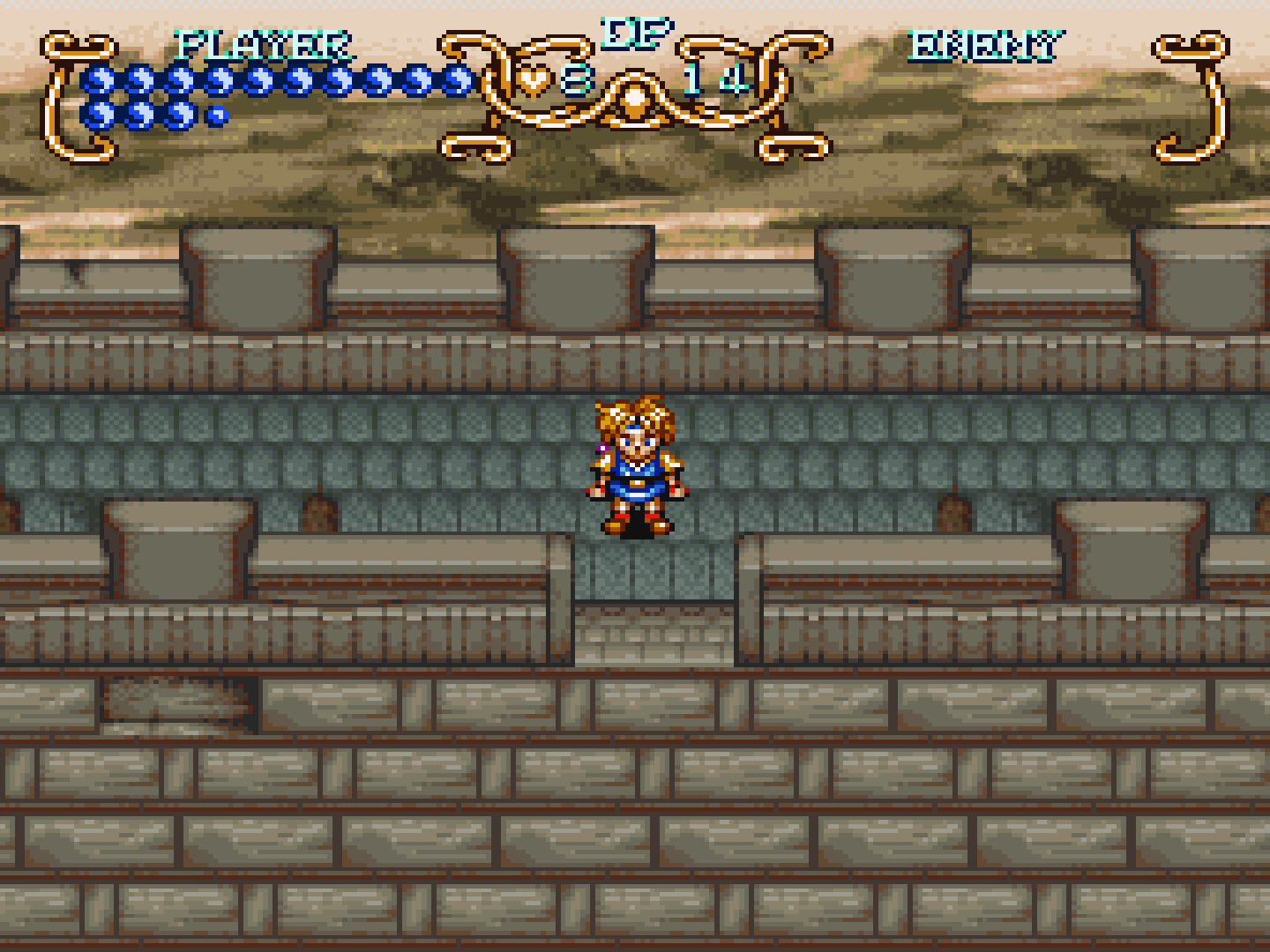 Knowing there's going to be a boss battle soon, I head back to the portal to save.