I talk to Neil after a triple check around Angel Village.

Neil warns us about how hot the Floating City is...is this place in the middle of the desert? 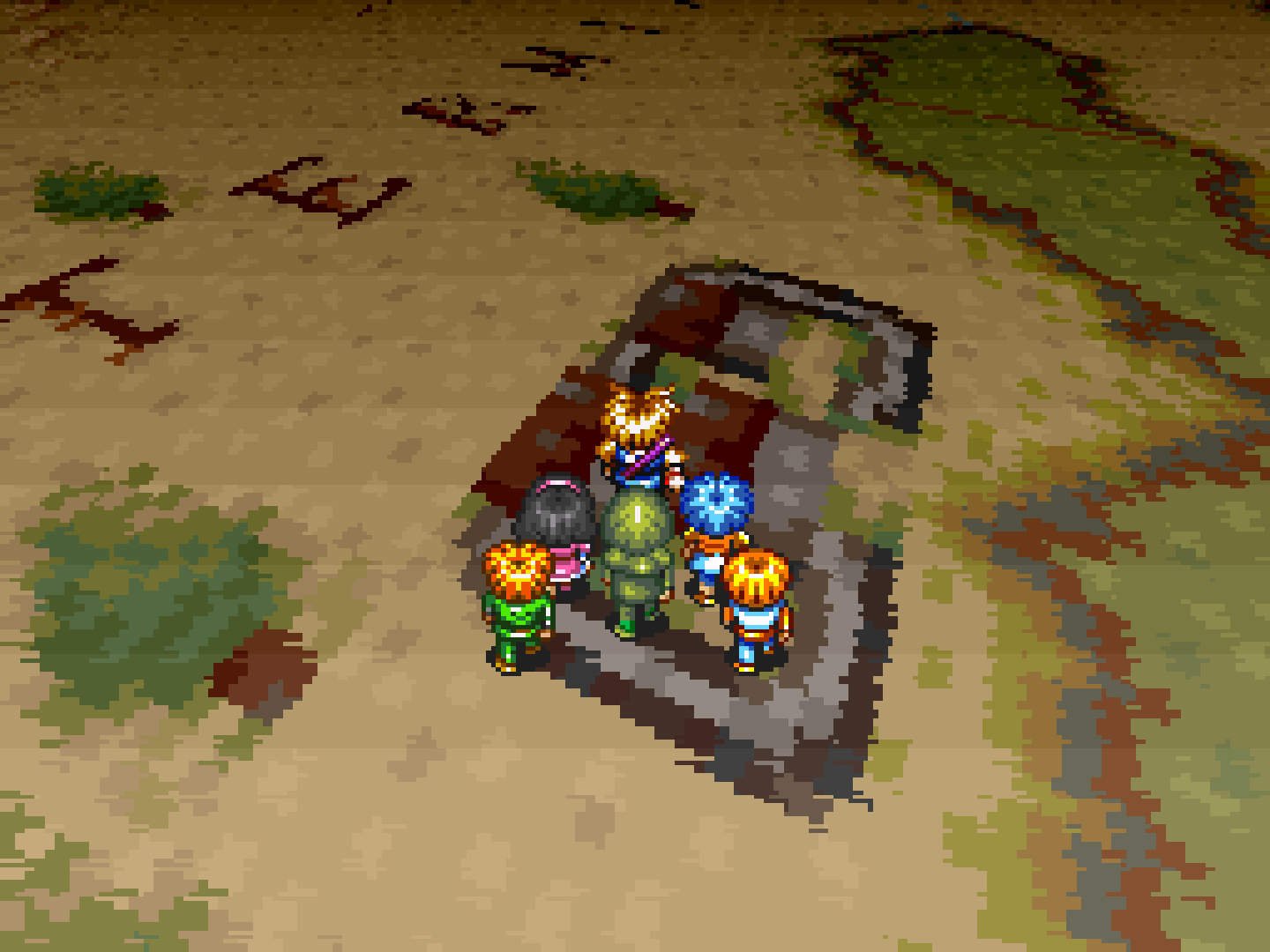 There's a lot of turning around on the world map... 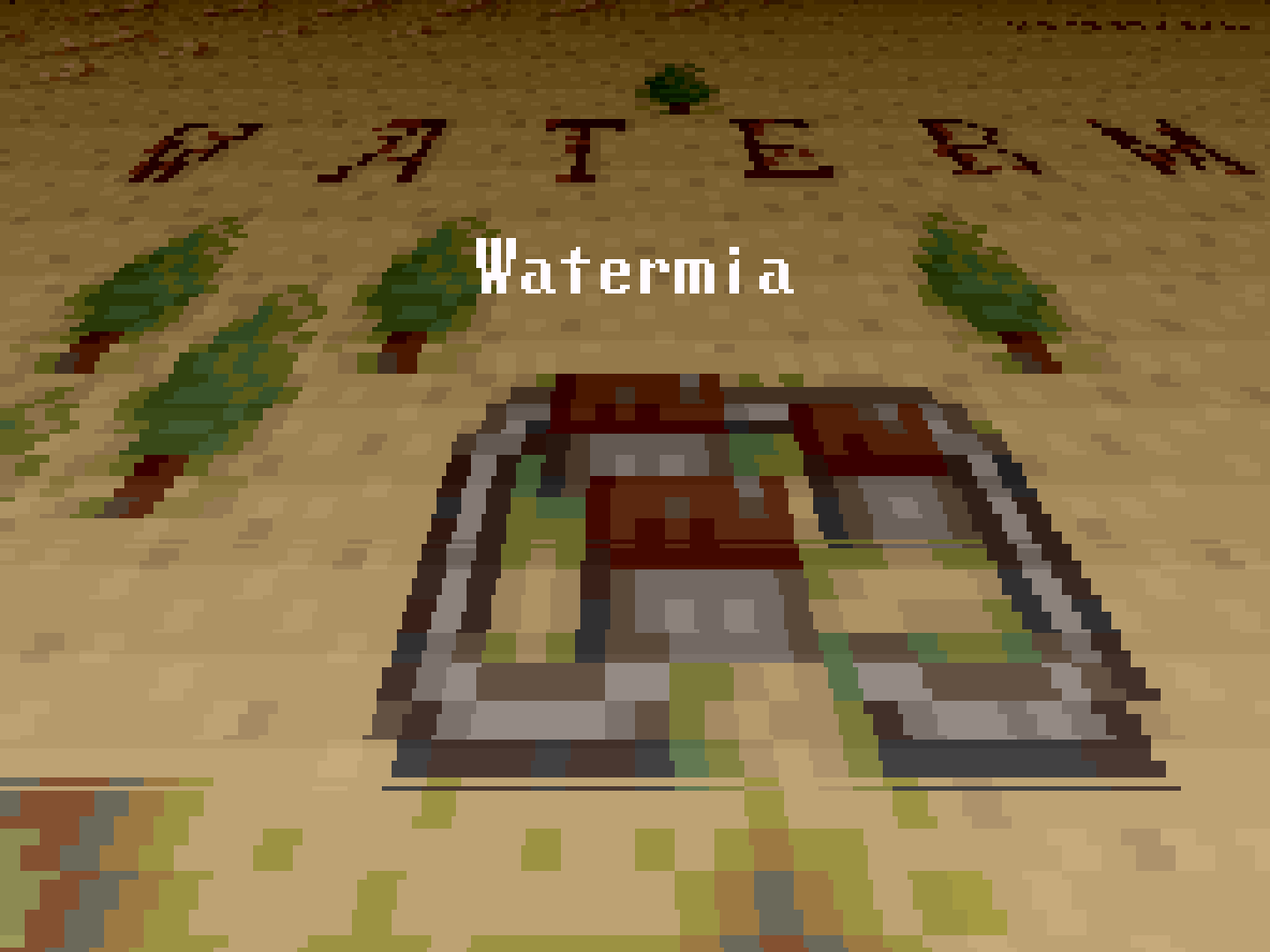 The floating city's near the ocean... 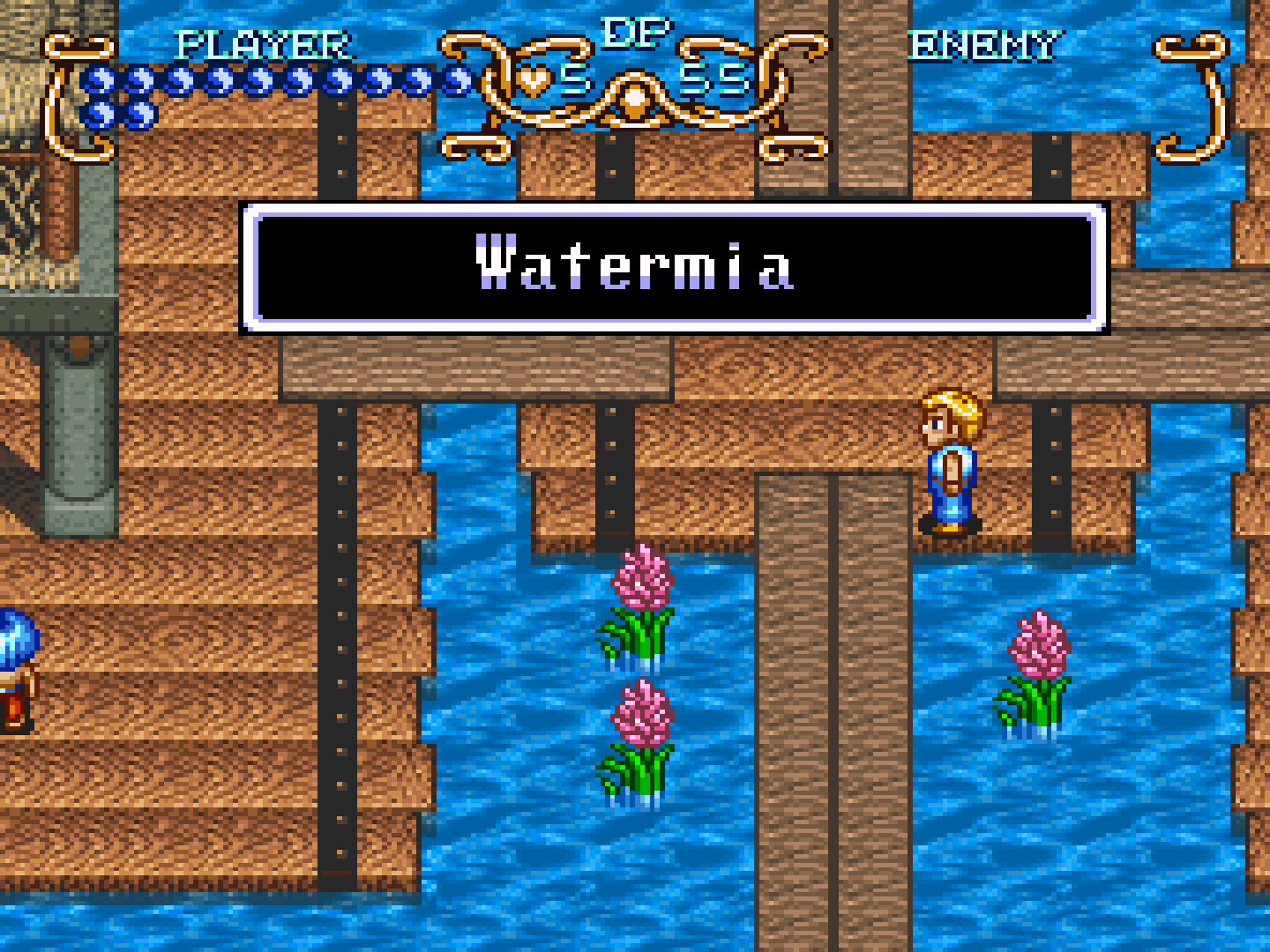 Technically, the "Floating City" is more or less a seaside city.

The camera hovers around the inhabitants and scenery of Watermia.

"We went to the Water City, Watermia. A beautiful town with houses built on rafts."

So the rest of the gang is situated to the house up north. 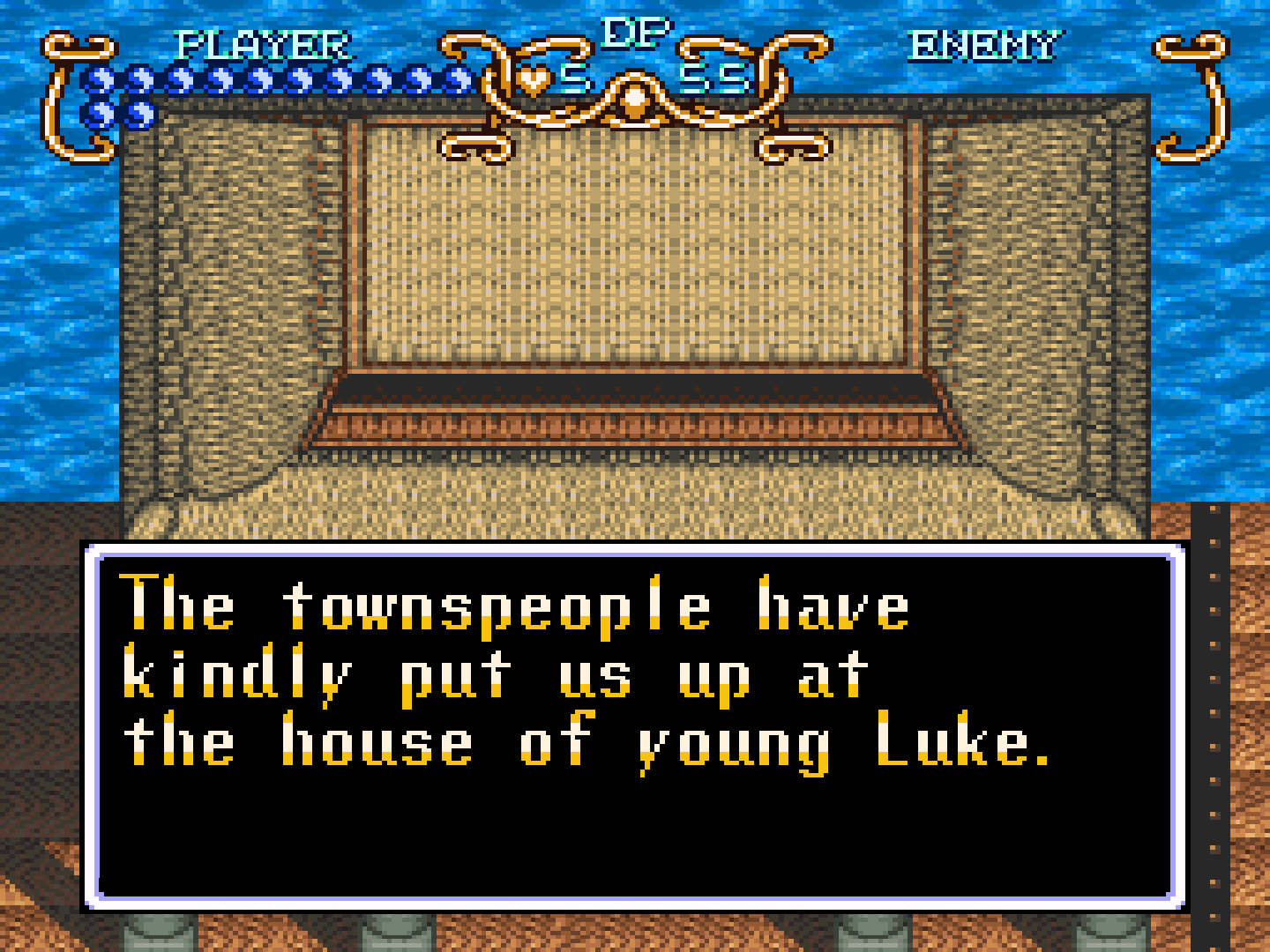 Luke: "I am going out in a long fishing voyage. You can use my house while I'm gone." 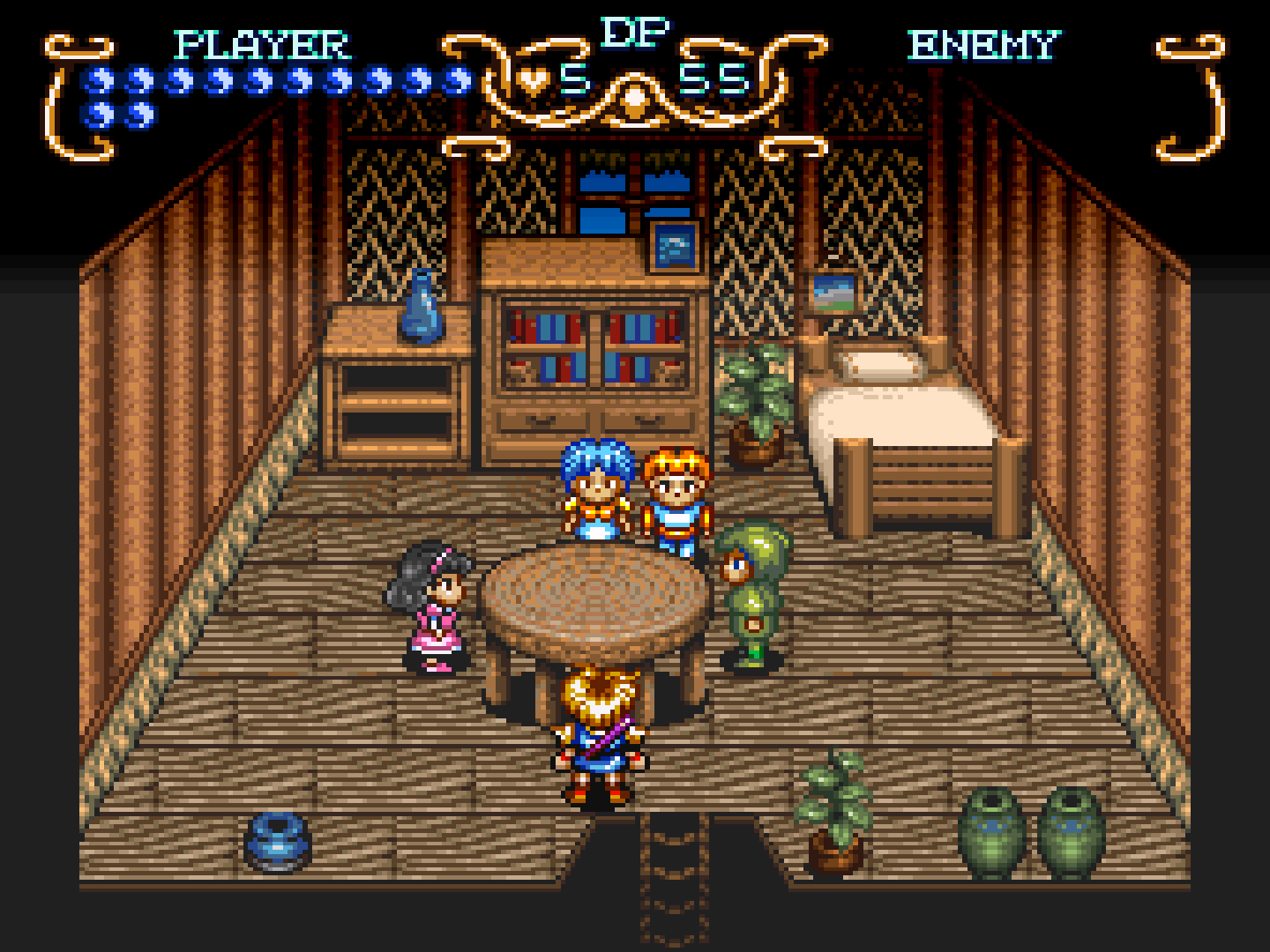 I talk to Kara, who mentions a "terrible rumor" about the village.

Kara: "They play games with human lives...Freejia was the same way but beautiful. Things always have another side to them..." True.

Lilly says Lance went to meet up to meet with "someone he knew in town."

Erik tells us he found something outside behind Luke's house.

Neil has a new idea after being inspired by the raft house.

Behind the ladder entrance is someone's diary. Dangit me, why am I doing this?

"After a long journey we arrive in the floating city, Watermia. I was parched after our journey. Blisters on my feet, but I wrapped them in my handkerchief."

"I'm pleased that I can be so concerned with someone else. I've heard this saying from a villager. 'If you wish over a lotus leaf on a full moon night, your love will notice you.'"

They're thinking of trying that.

Luke's out on the raft outside, looking at the horizon. Shouldn't he be getting ready for his trip? 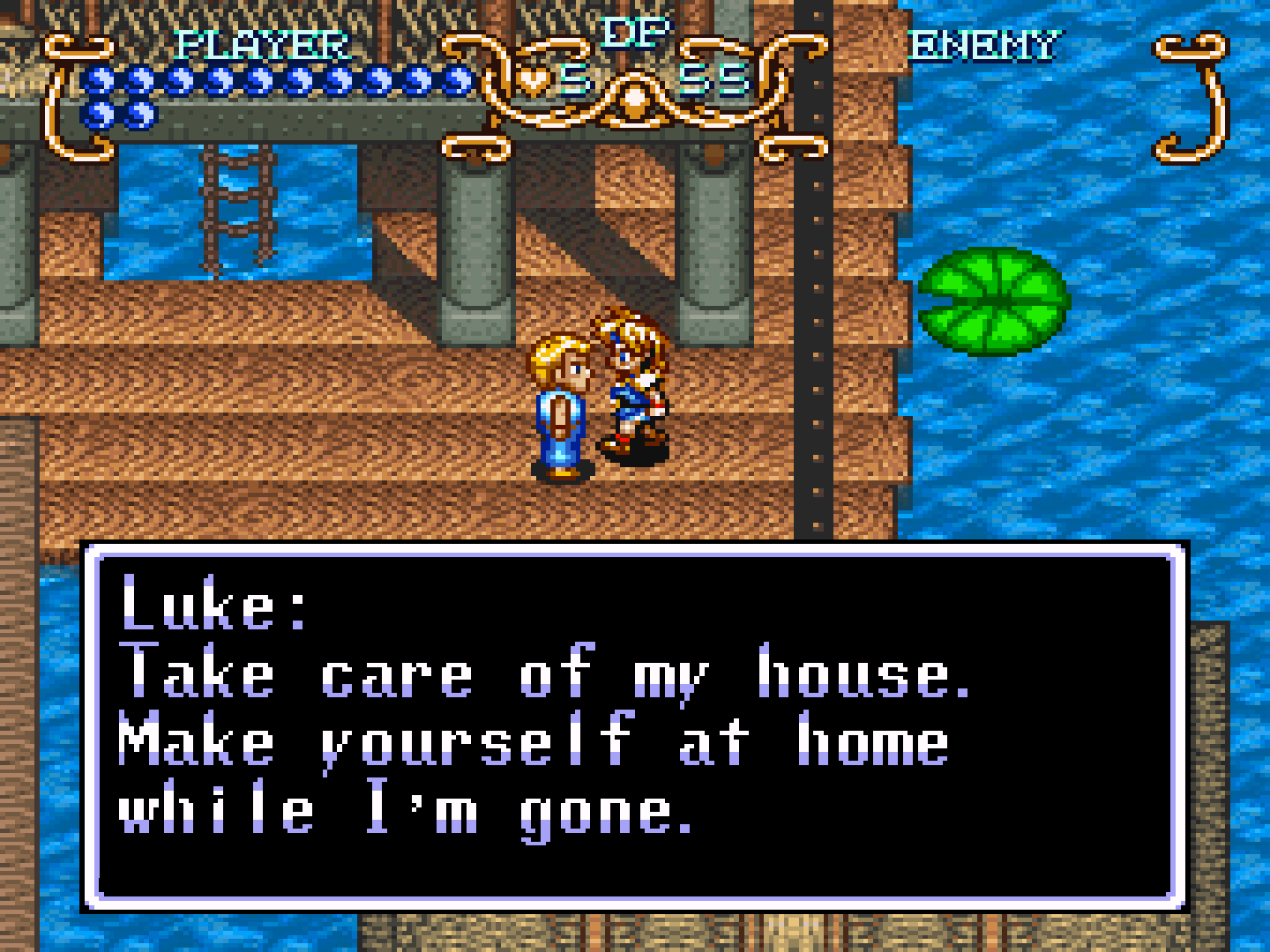 There's a horned kangaroo (or is it a horned camel? Or both?) in one of the rafts. 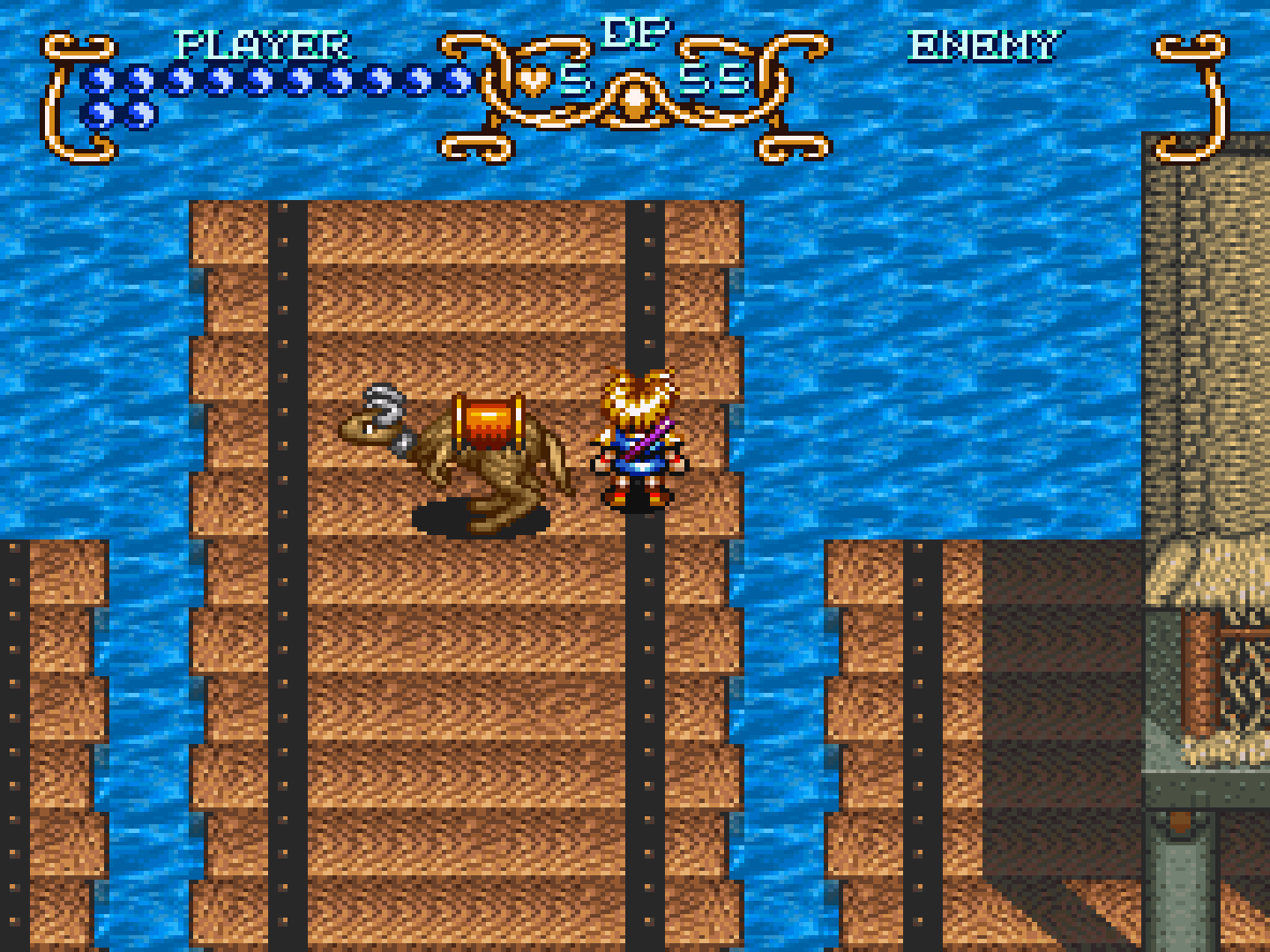 In the house west of here, we find Lance, and probably his grandpa! 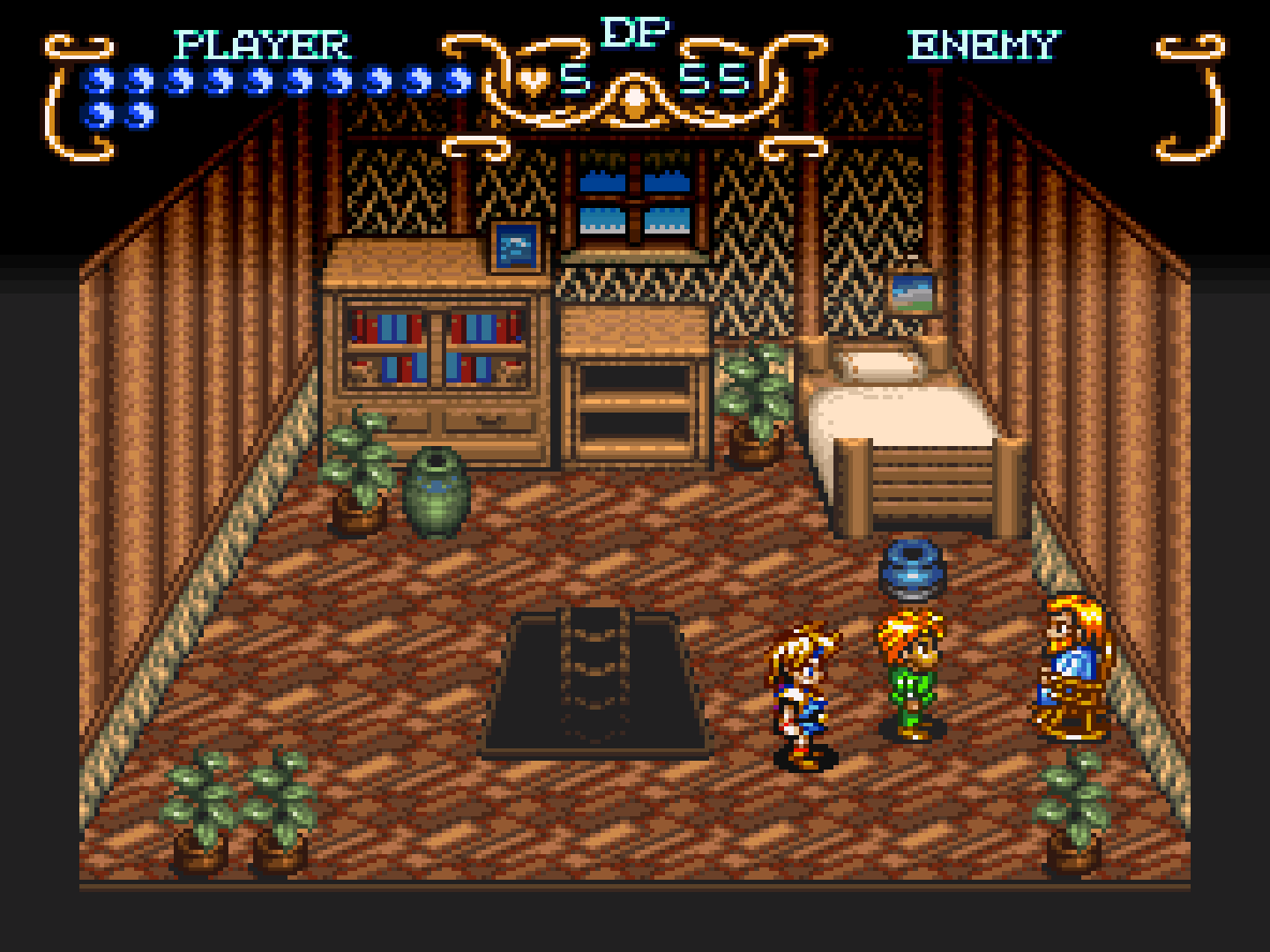 He asks Will if he recognizes the man in the rocking chair. The music falls silent. 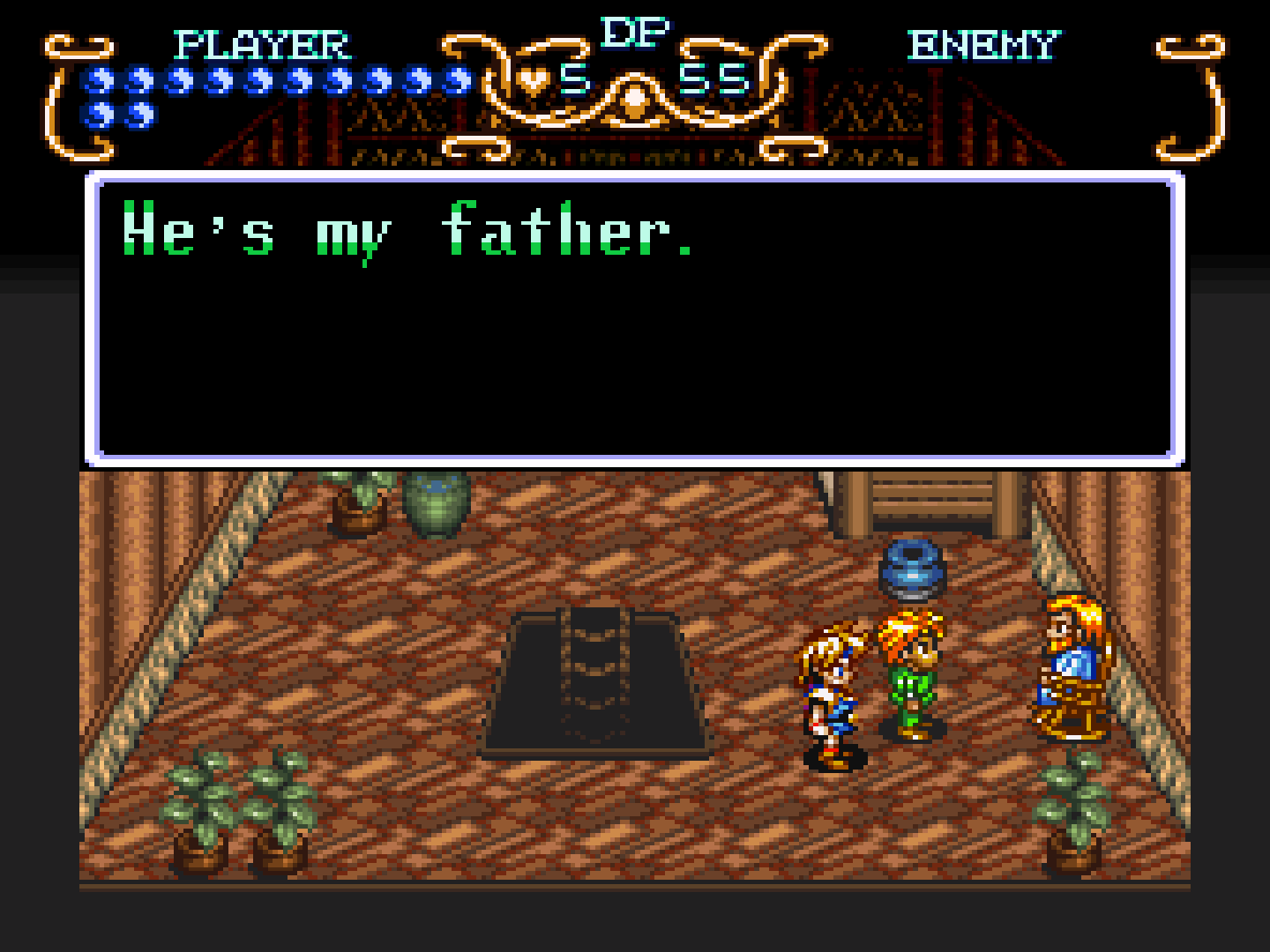 I talk to Lance's father. What is he doing here in Watermia? 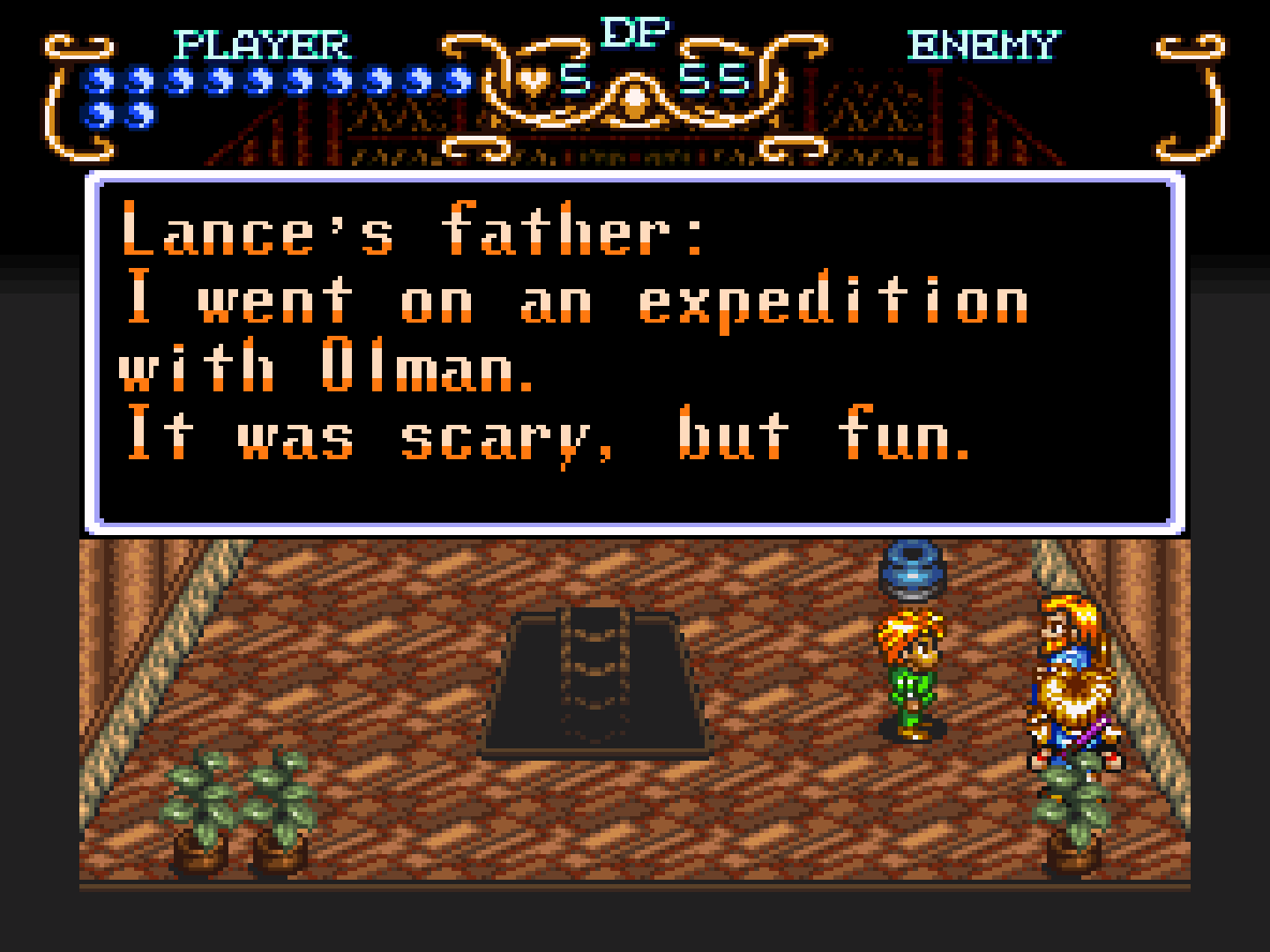 I talk to Lance again. 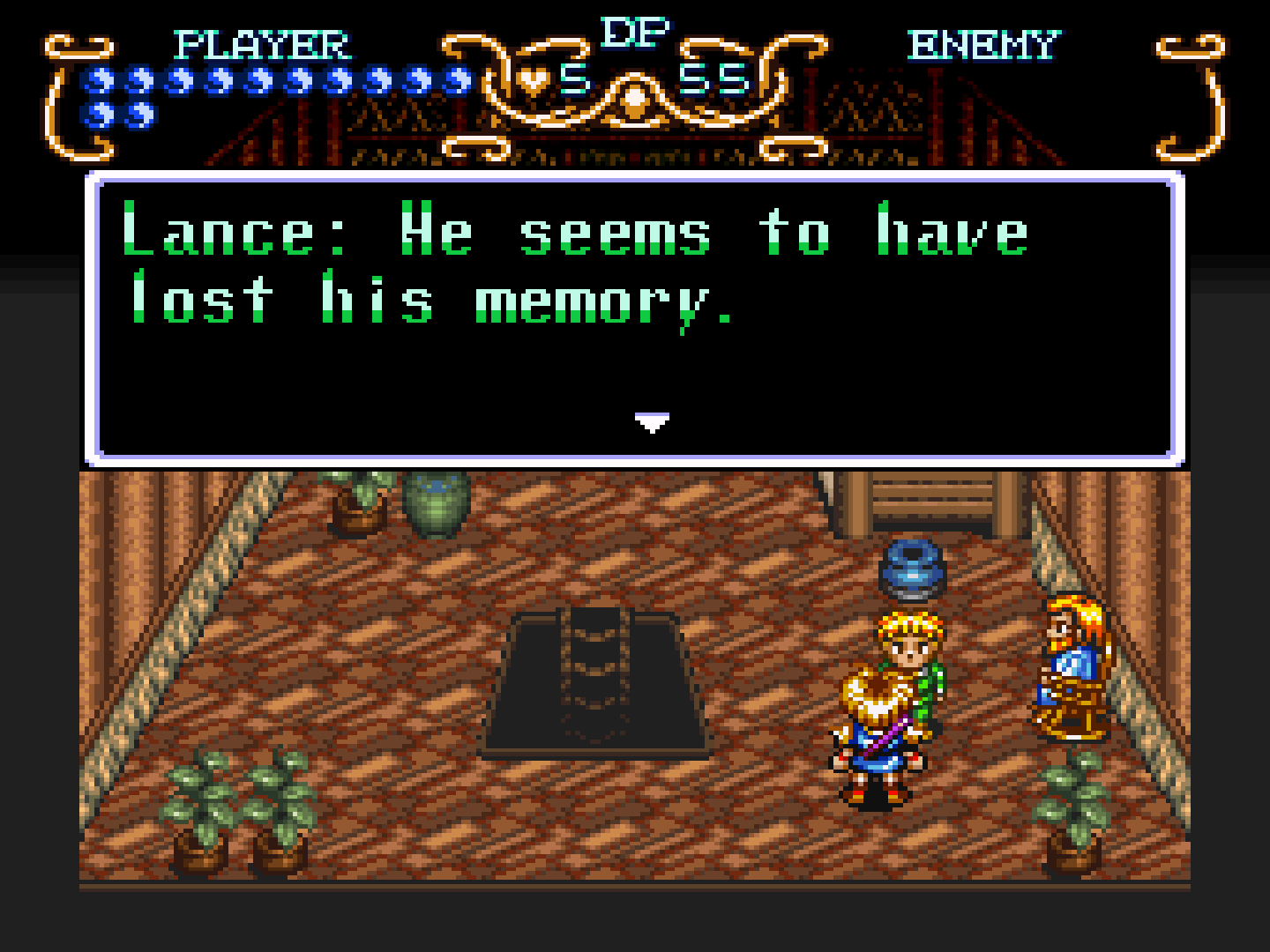 So Lance's father has amnesia!?

As we turn to leave, Lance comes along. 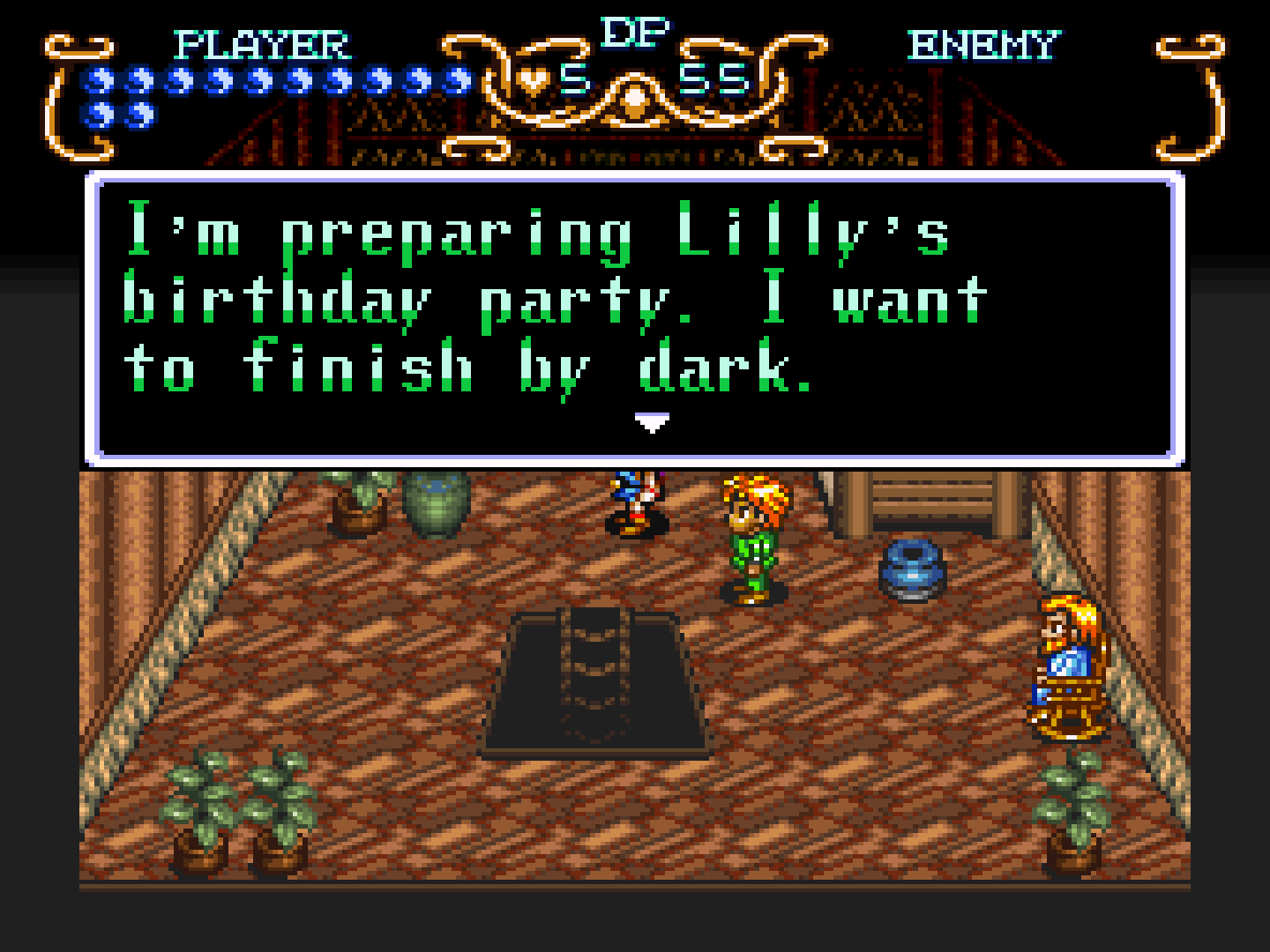 He wants to finish the necklace before Lilly's 15th comes around...

Lance heads back to Luke's.

I walk around the lilypads to talk to twins, where one of them mentions another real life landmark, along with snakes being there. 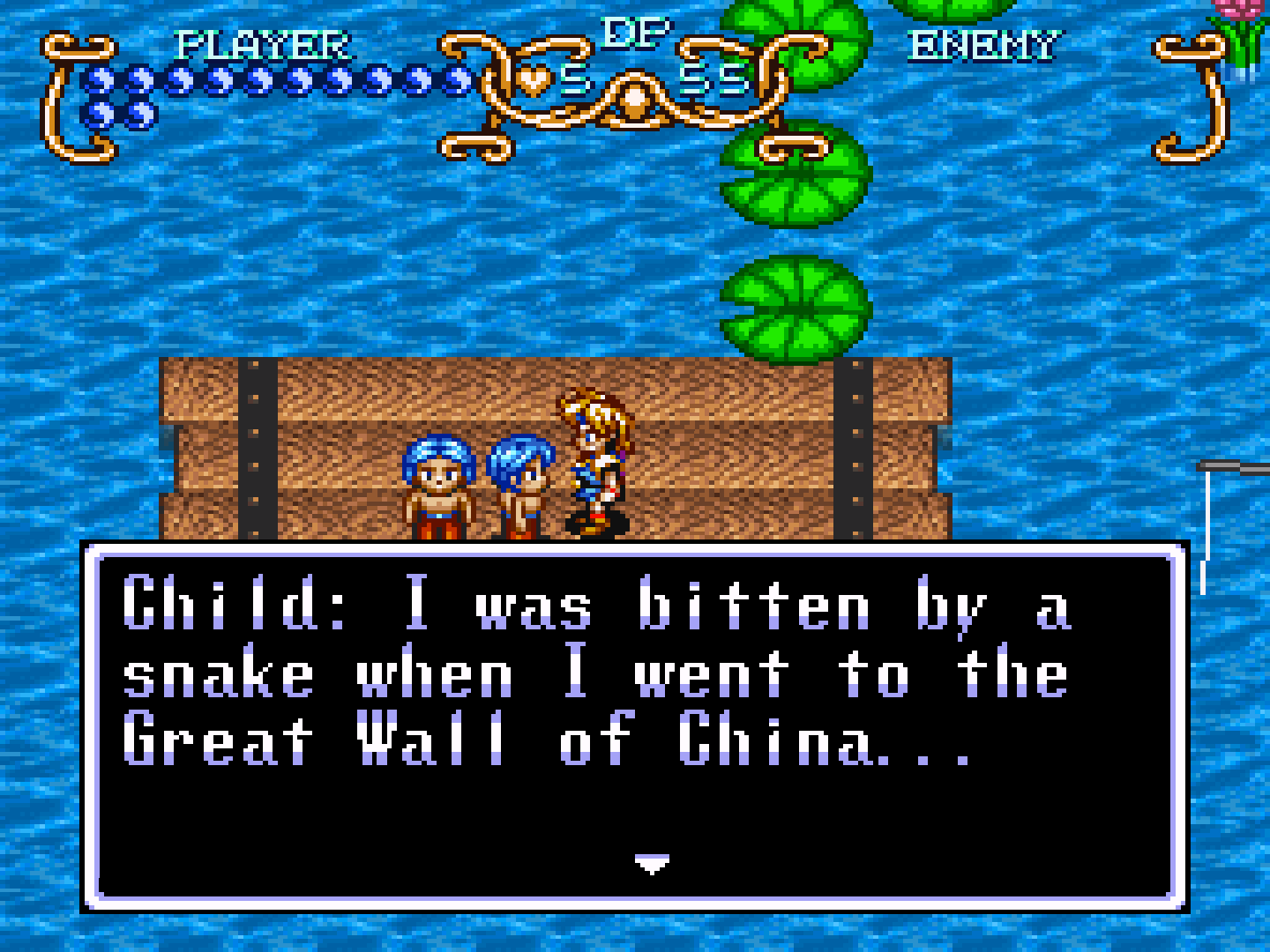 I continue walking around to talk to more townspeople. 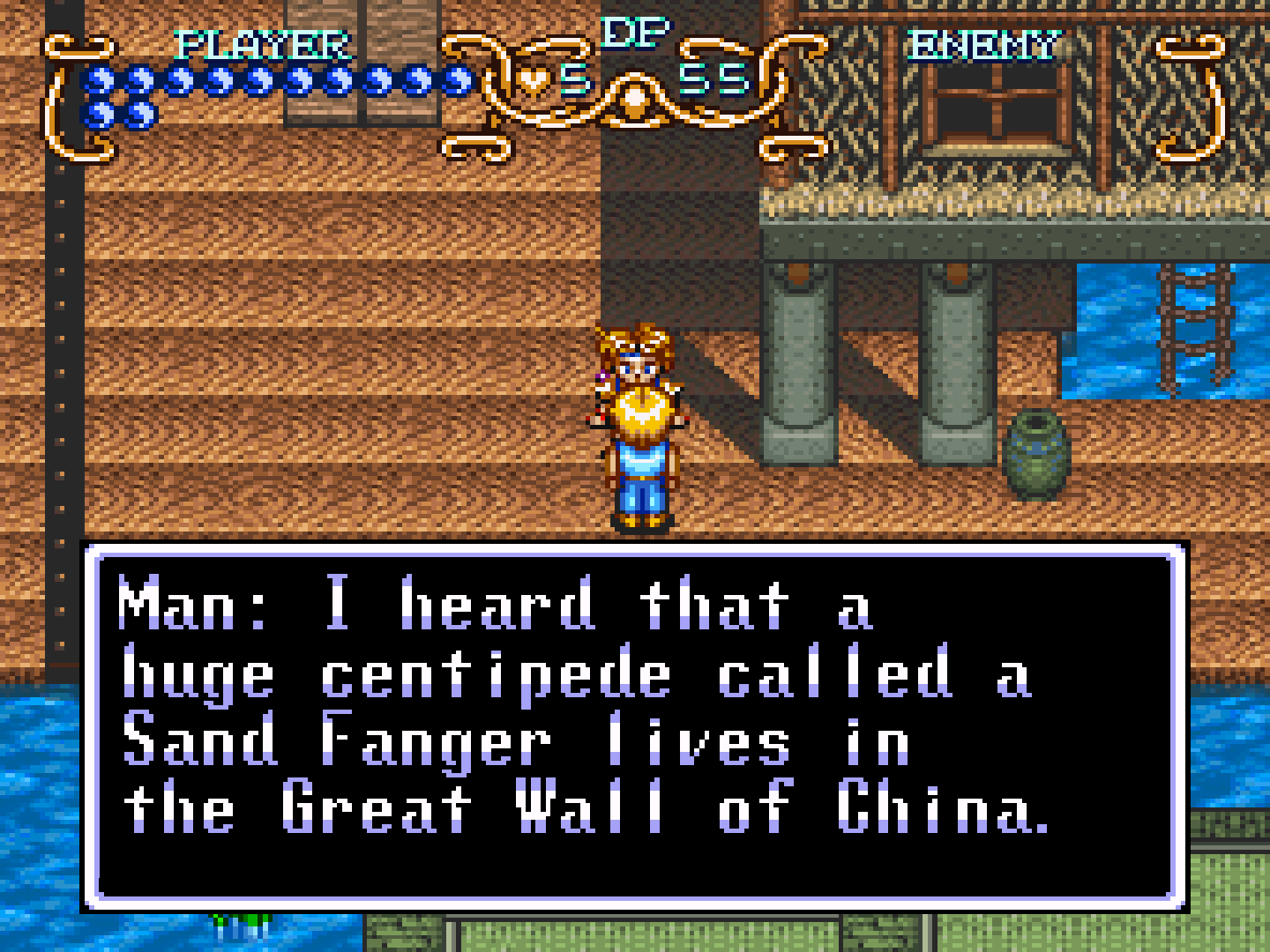 The Sand Fanger's fluid is medicine for most diseases, he says. 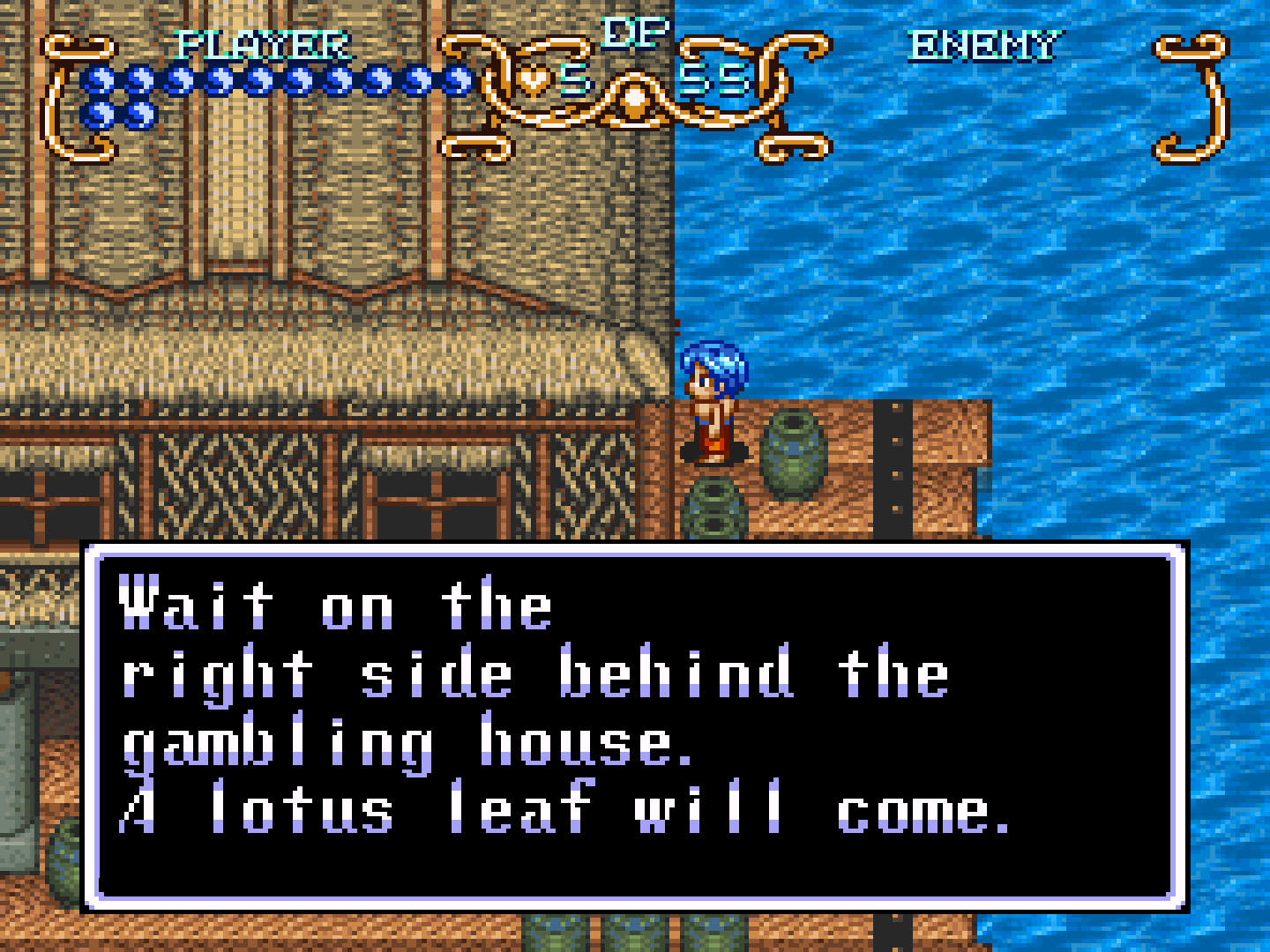 A Lotus Leaf, huh? But where's the gambling house?

The inhabitants in a nearby house mention Lance's father, who know about his travels with Will's famous father.

From one of the citizens, they built rafts as part of the city because they "love to move around."

The "kangaroo-camel with horns" I mentioned earlier has an in-universe name: a Kruk. 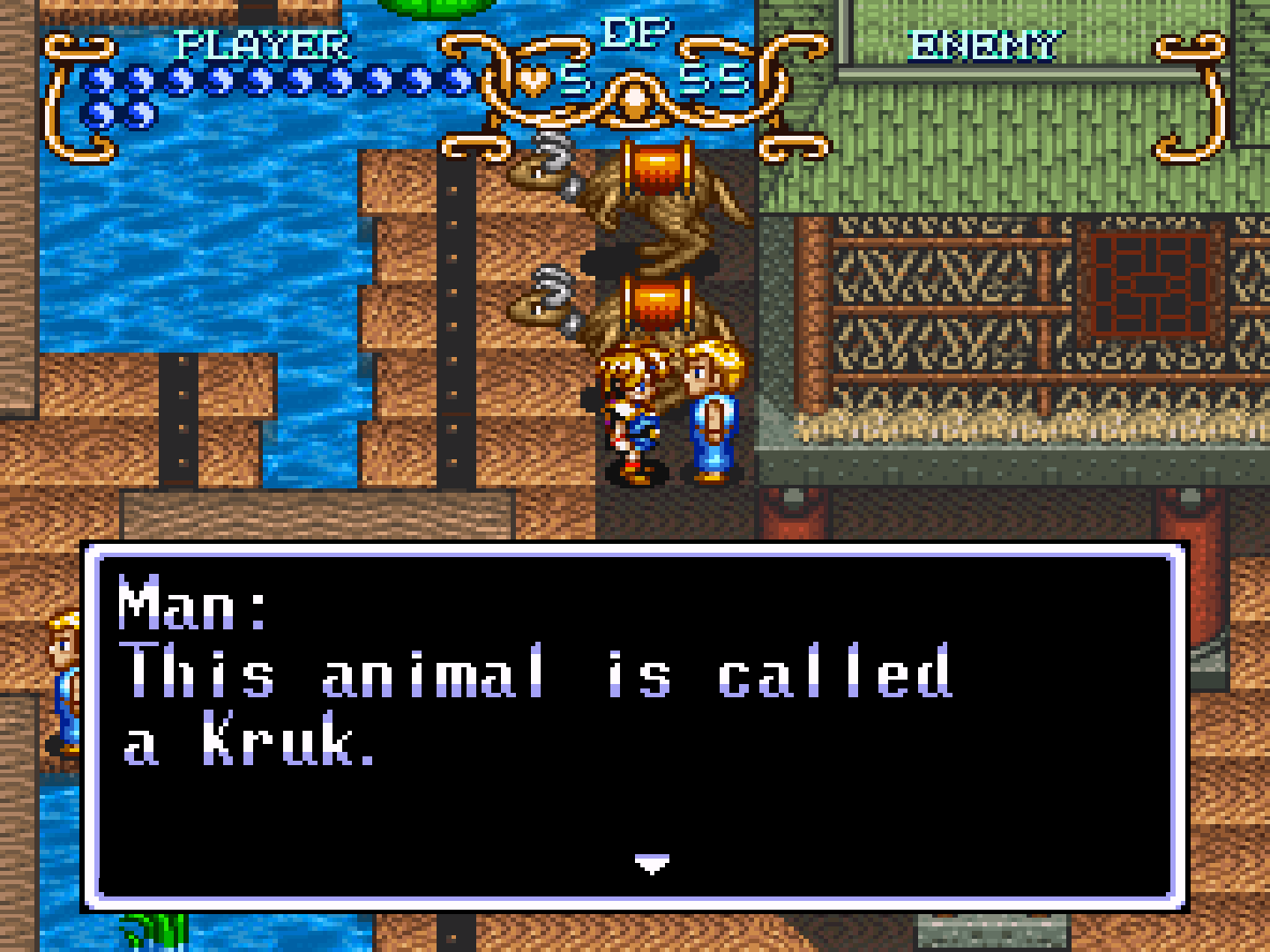 The Kruk is a desert crosser.

East of here is the gambling house. 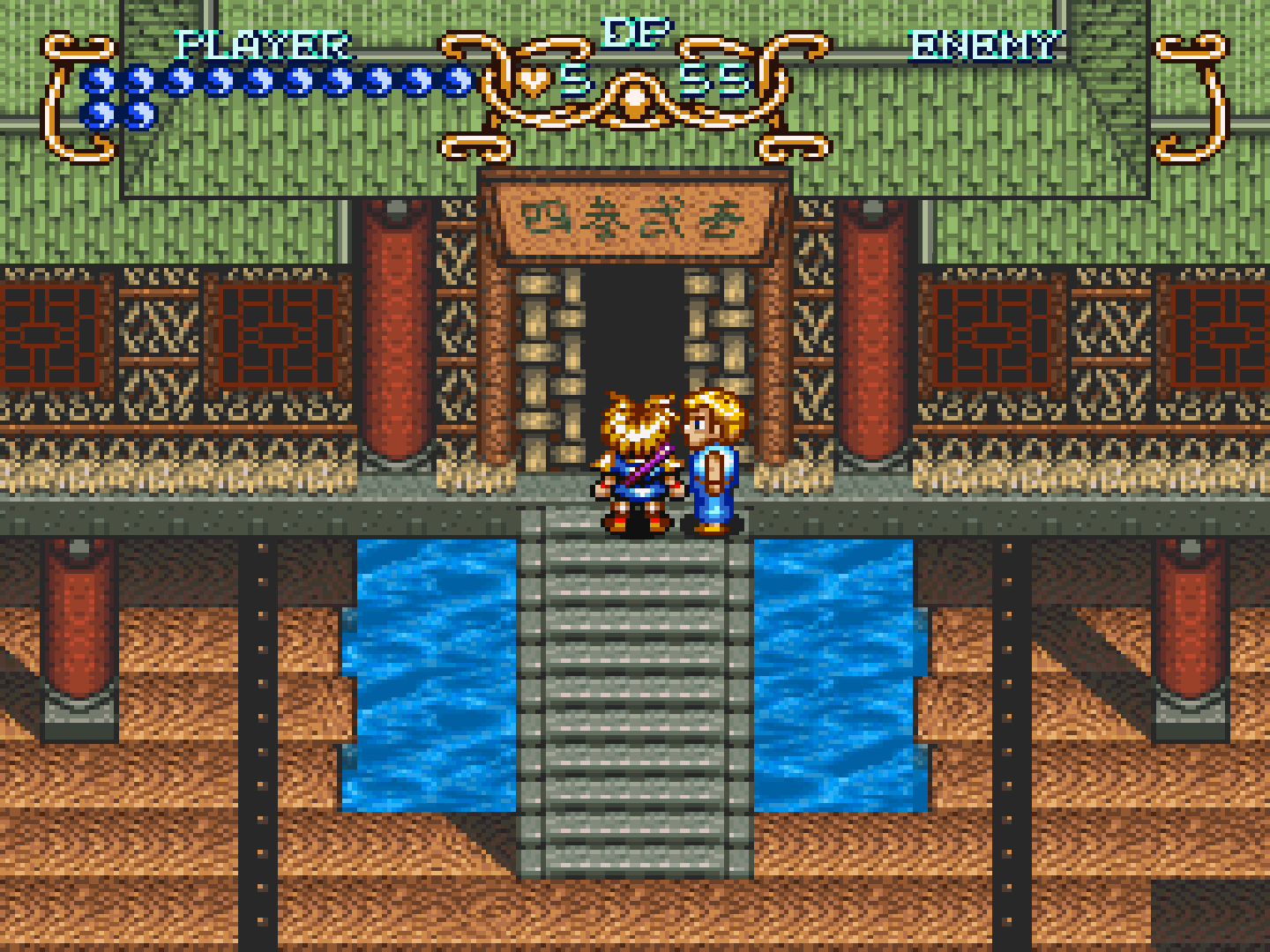 I head inside, where there's a beer drinking contest going on. I find a Red Jewel in one of the vases in the northeast corner!

The battle music's playing. Looks like it's serious business in the gamble house.

One man tells us that there's money in a raft outside of the gambling house.

A woman tells us not to waste life on gambling.

The next man I speak to is our good friend, the Jeweler Gem!

Counting the one we have, we now need 4 more Red Jewels for the next prize.

The participants are almost at their limit...

Watermians use the seawater as their drinking, washing, and cooking water.

A lady across the gambling place tells us more about water's constant, changing movement. 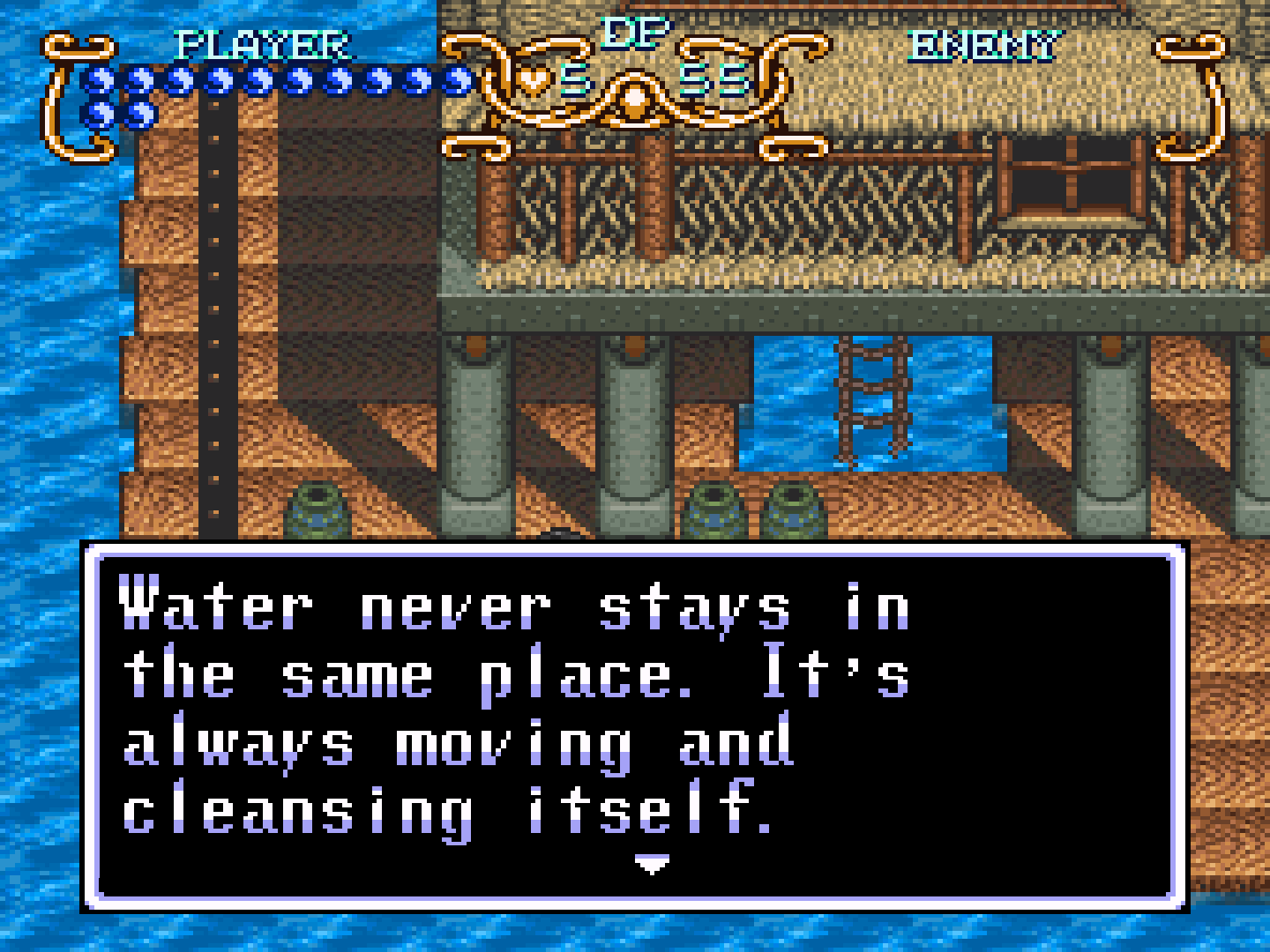 The house behind her has this town's Dark Space portal! 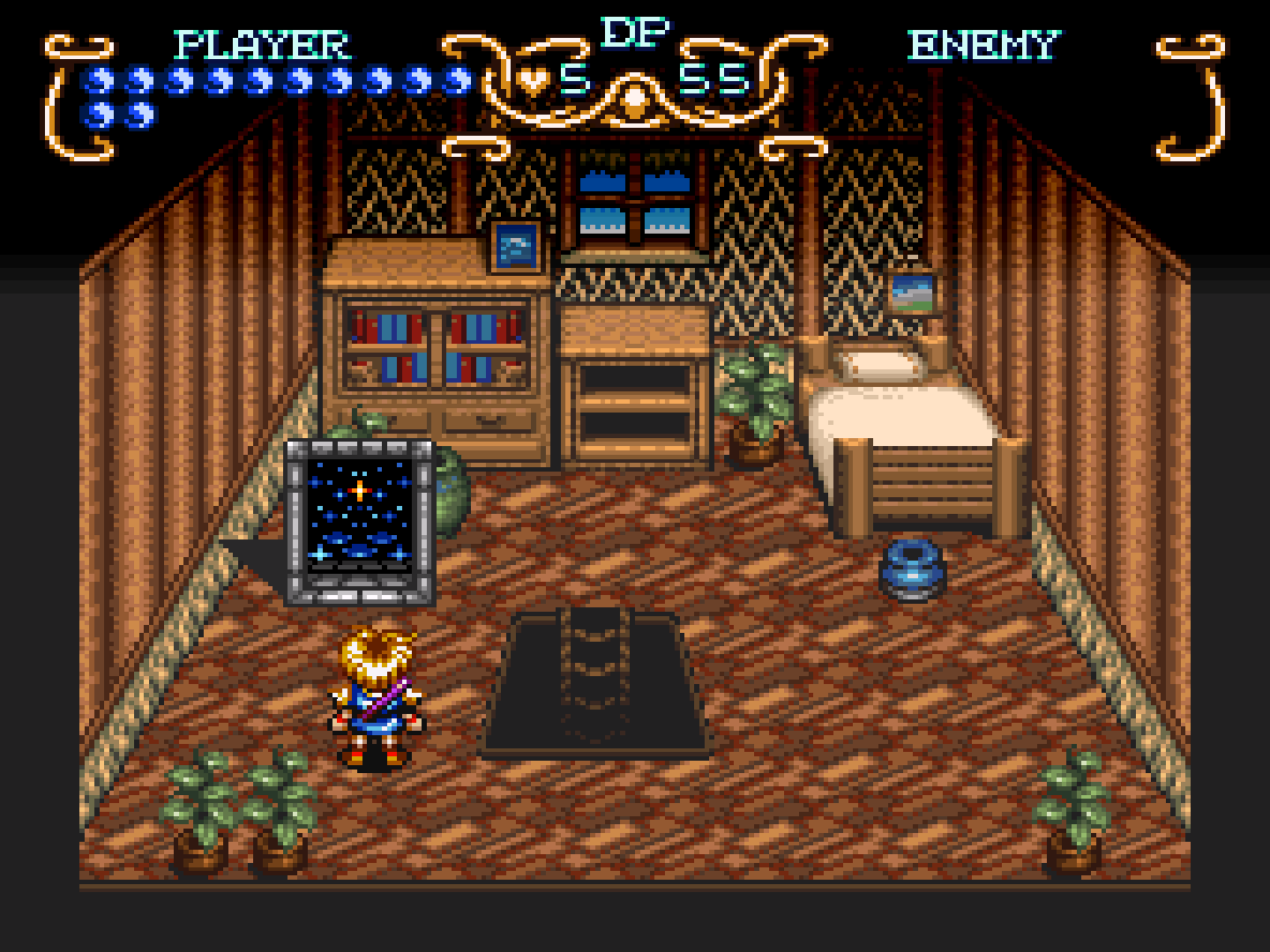 I save here before heading out again.

There's a man on a lilypad, who tells us to wait for another one. He has all that room to himself there...

I find another Red Jewel in one of the vases near the woman.

I go back to the area of the gambling house, around to the right side, and find a lilypad to cross into parts unknown...

Where will this lilypad take us? 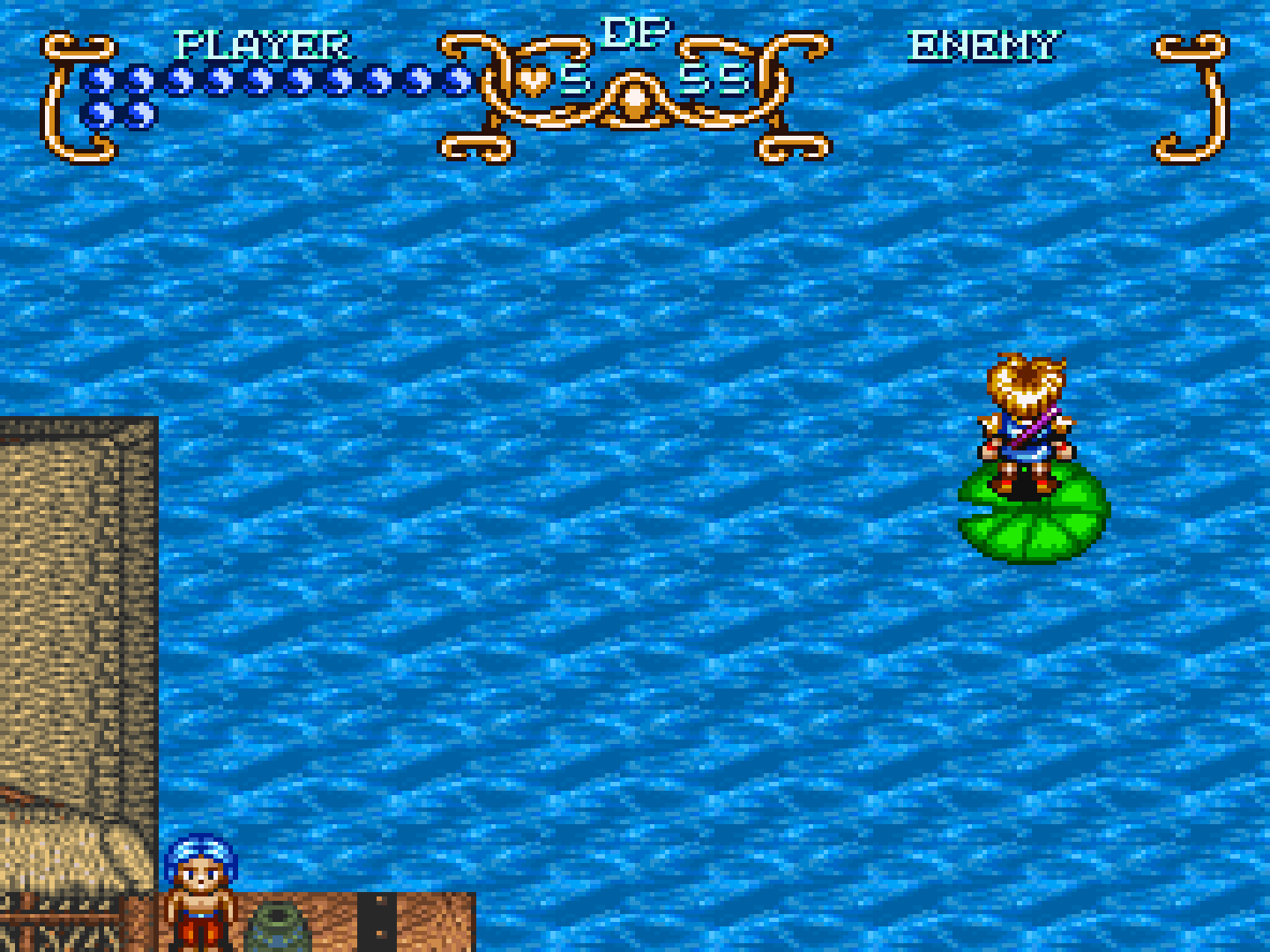 A fisherman tells us about another game. A "most dangerous" one. 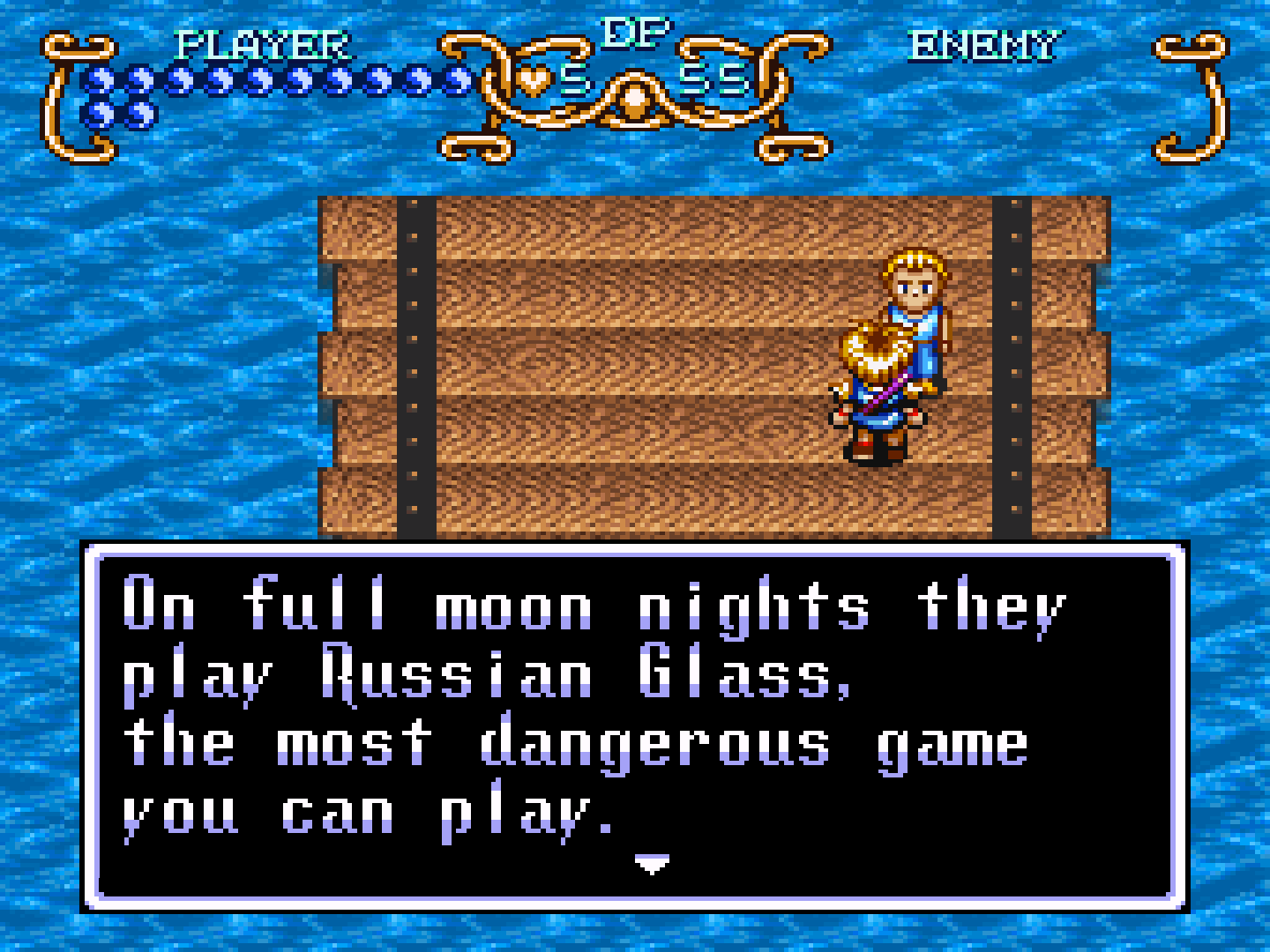 As soon as I get off the lilypad to go back, it leaves us behind!

It comes back, but after waiting awhile, it's still not moving...

The fisherman also lands in the lily pad with us!

...but with some maneuvering, I manage to make the lilypad take us back! 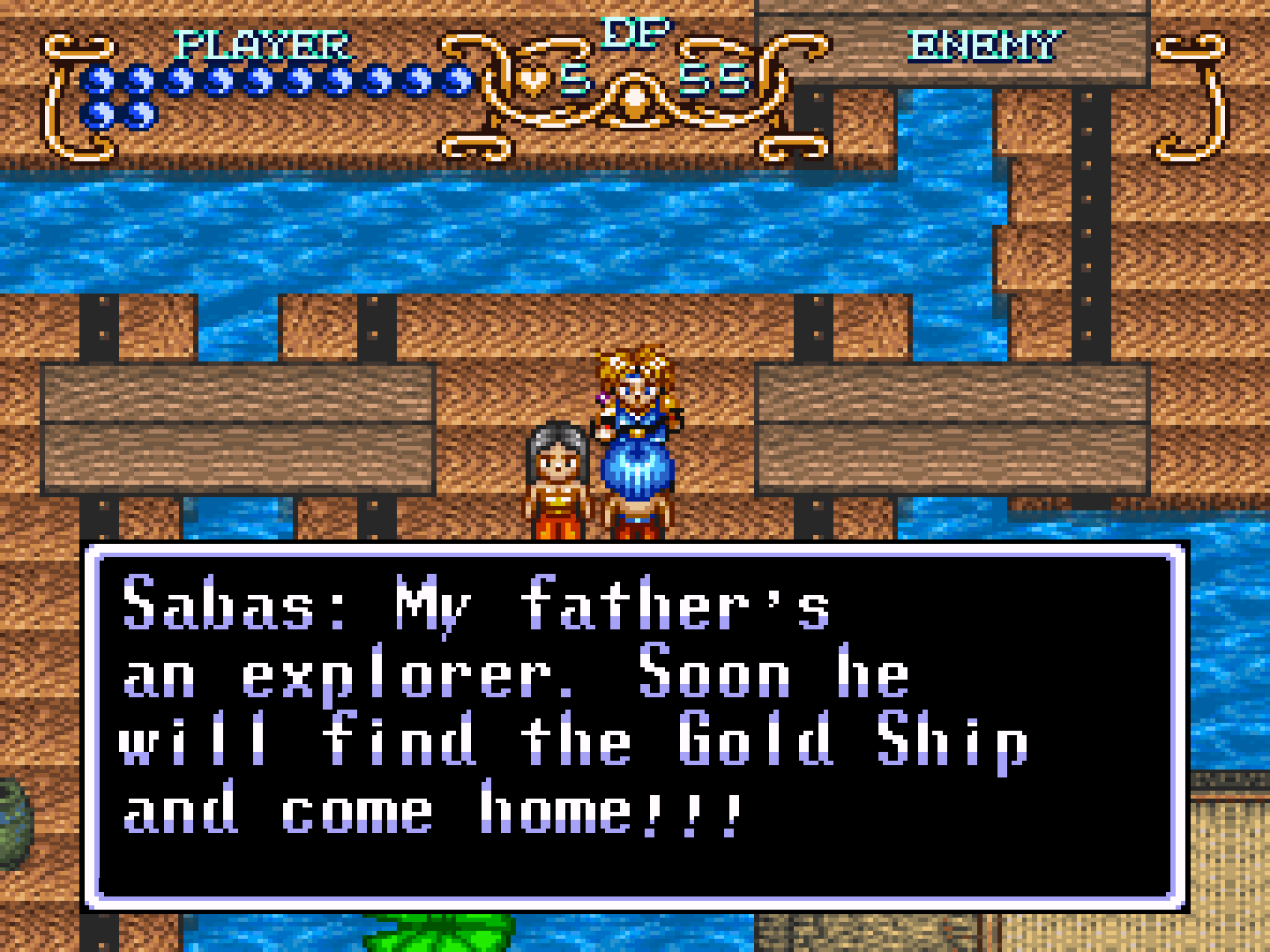 His older sister, Nana, mentions their father's been away for half a year now on his trip to the Incan Ruins...

I stop my session here for tonight!