The gang continues their way out of the underground tunnel, and finally, after a month of being in that tunnel, daylight breaks! 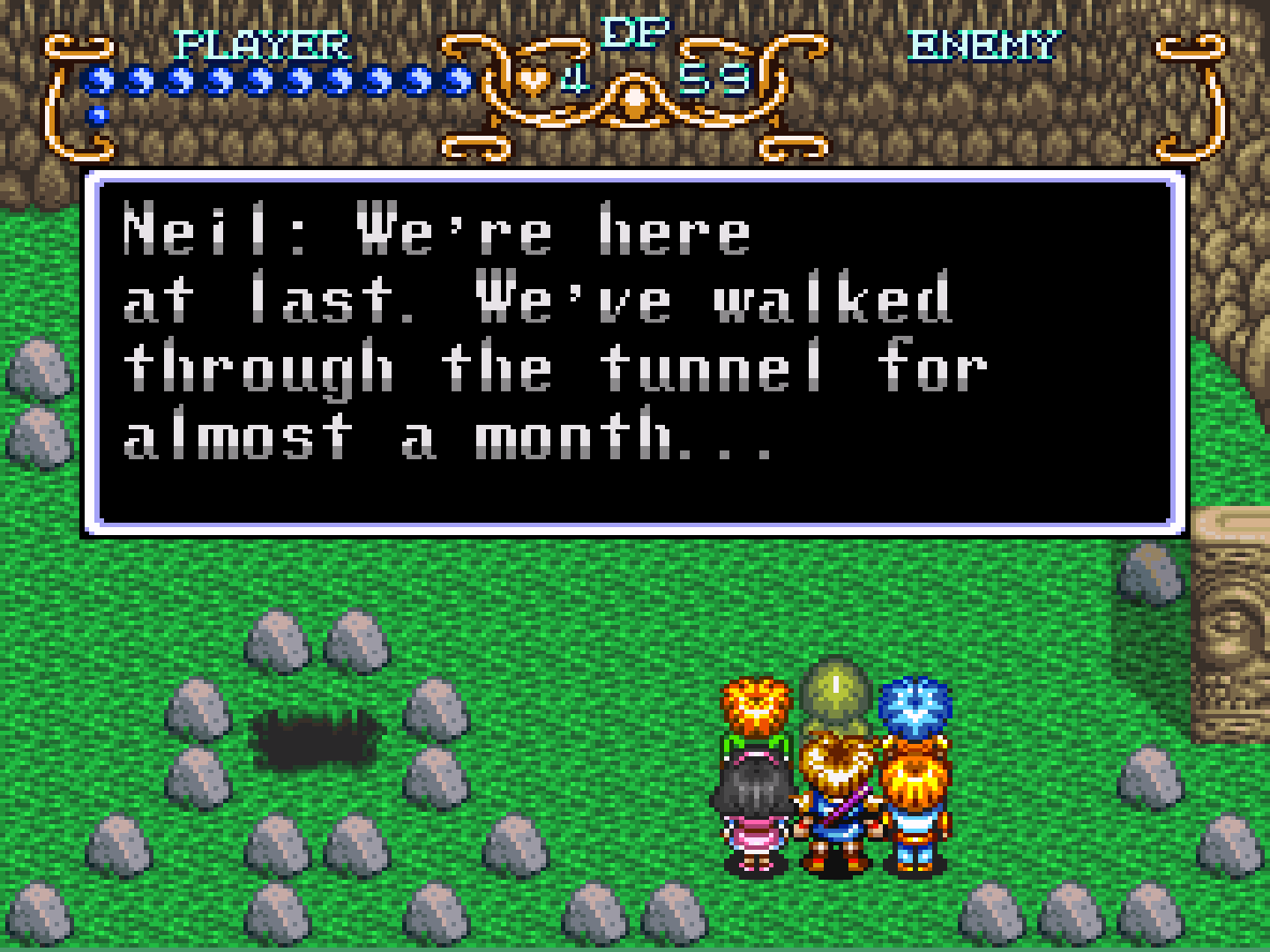 Lance reads a nearby sign next to a well in front of the gang.

Lance: "What? Angel Tribe? 'Travellers, please use this room?'"

Neil's surprised by the "angels" existing in this universe.

Neil: "They say angels don't like meeting with people."

Neil decides to take a long needed respite there...

Kara asks Will to come with her, noticing Will "grinning" about something. Kara decides to explore alone.

Lilly turns into a fairy and climbs down the hole with Lance and Neil. 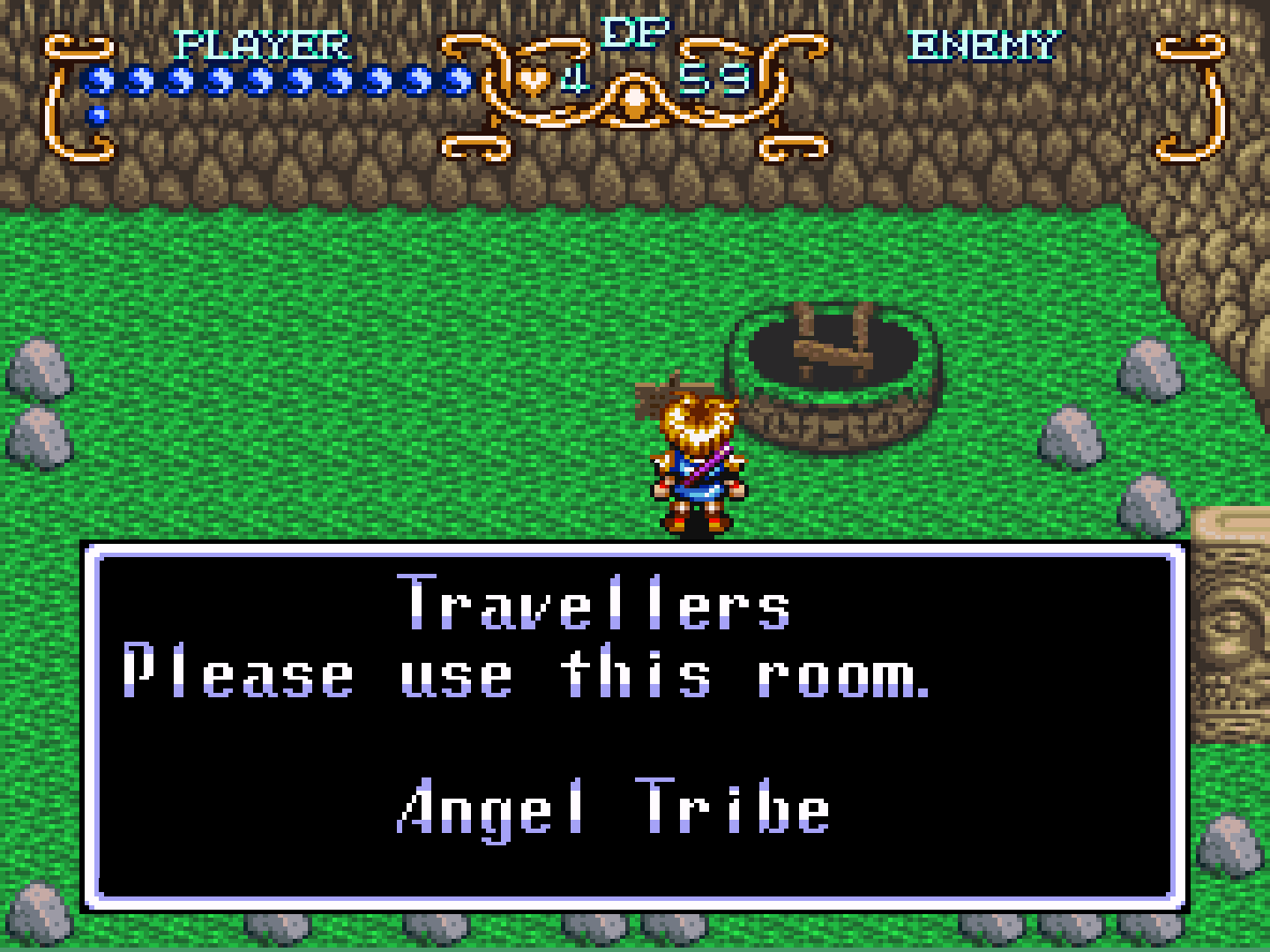 I head to where Kara went. 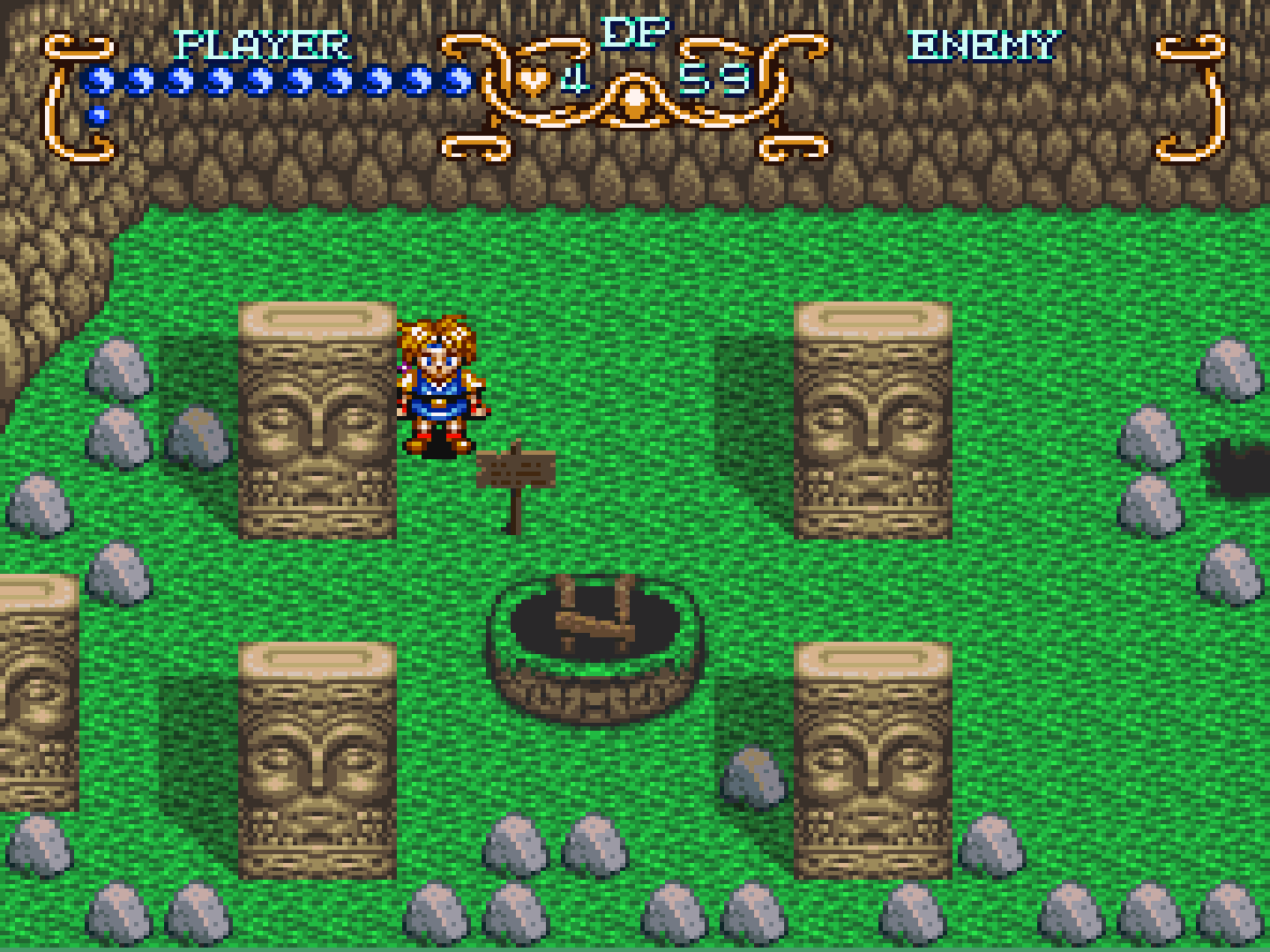 Reading a sign, this is the entrance to the Angel Tribe's village.

Going by the south entrance, it seems we're now in another continent. It took a month in-story to make it to this continent!

I climb down to the resting spot. 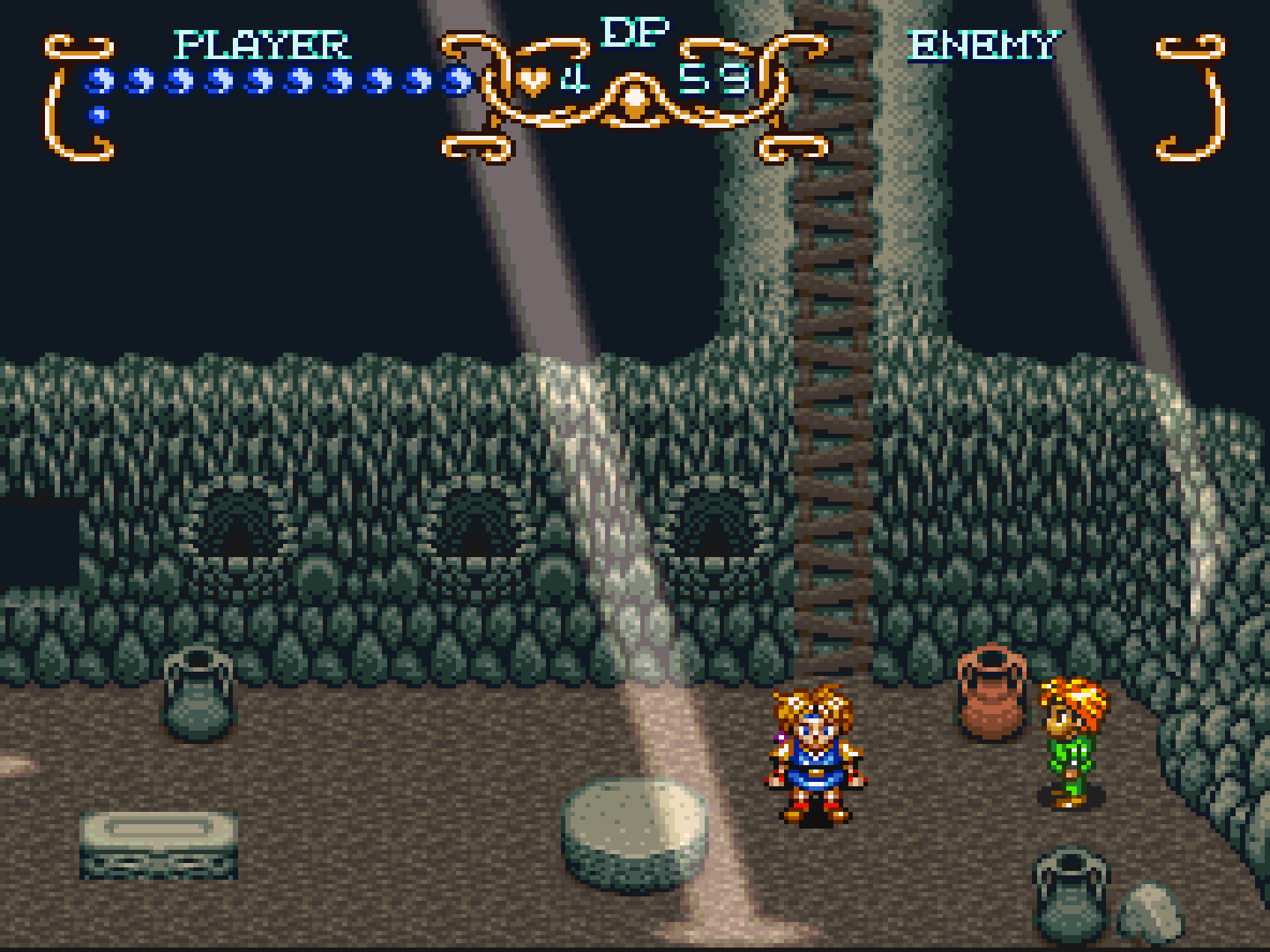 Lance is realizing at this point that he has feelings for Lilly. He asks Will if it's "like him" to feel like this.

Will: "But you've spent a lot of time together. It seems only natural." 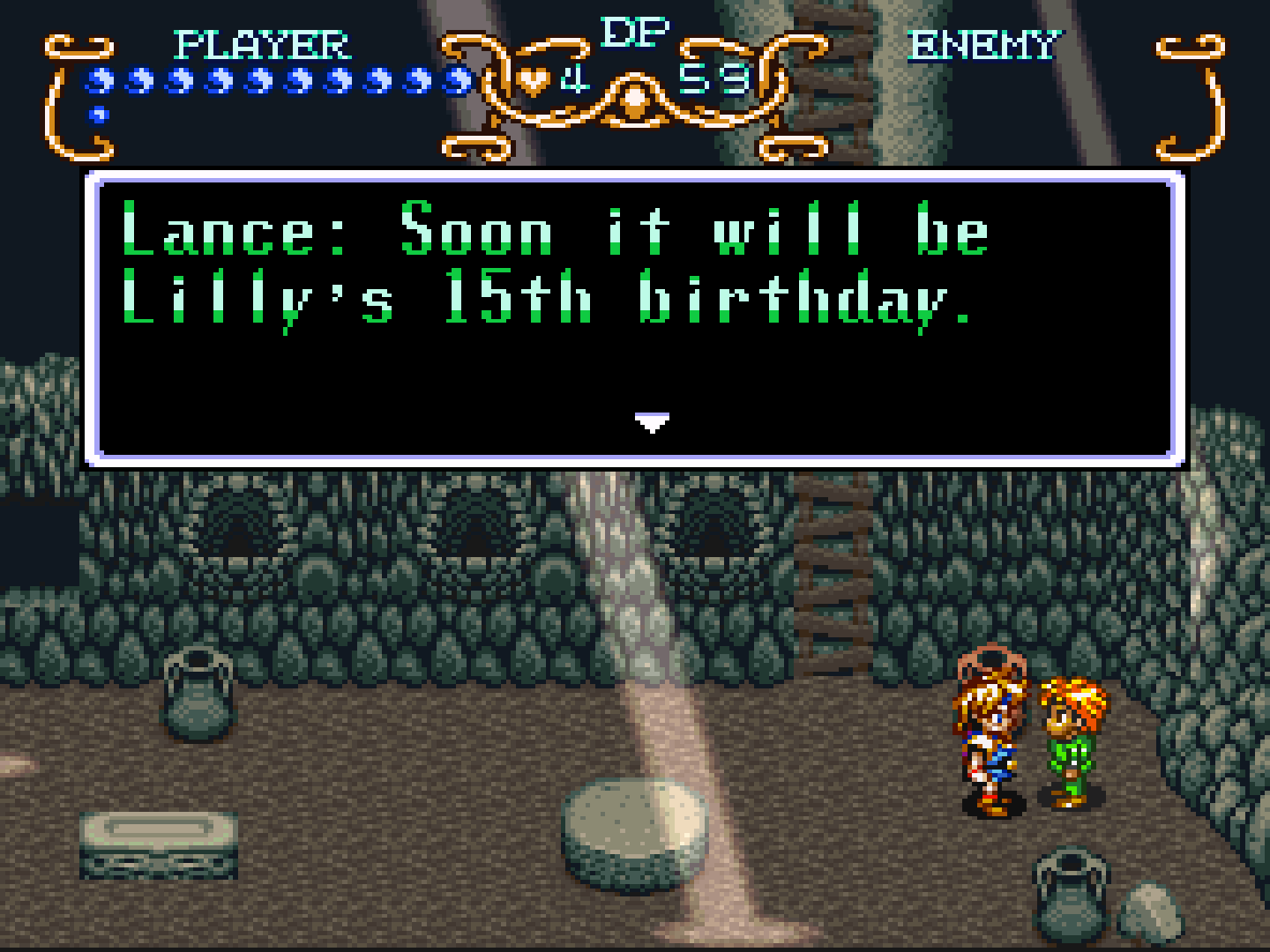 Holy heck! Lilly's around the same age as Prince Callum!

Lance wants to give Lilly a gift for her. He asks what Will would want to give Lilly...I'm now given three choices. I don't know how to approach this. 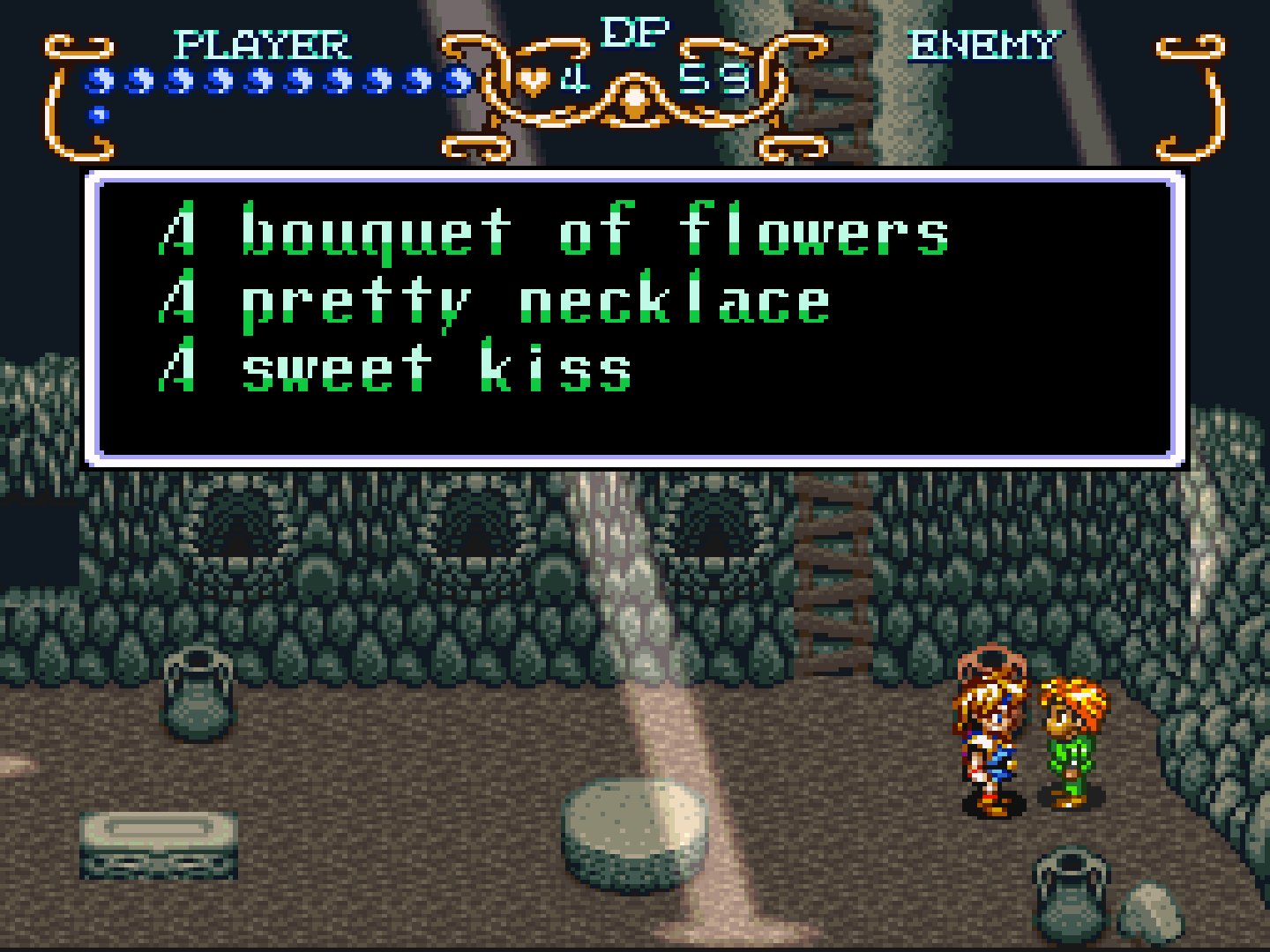 I choose the necklace, as a good memento. Flowers die eventually, and a kiss sounds a bit too romantic. Lance agrees with the necklace idea. 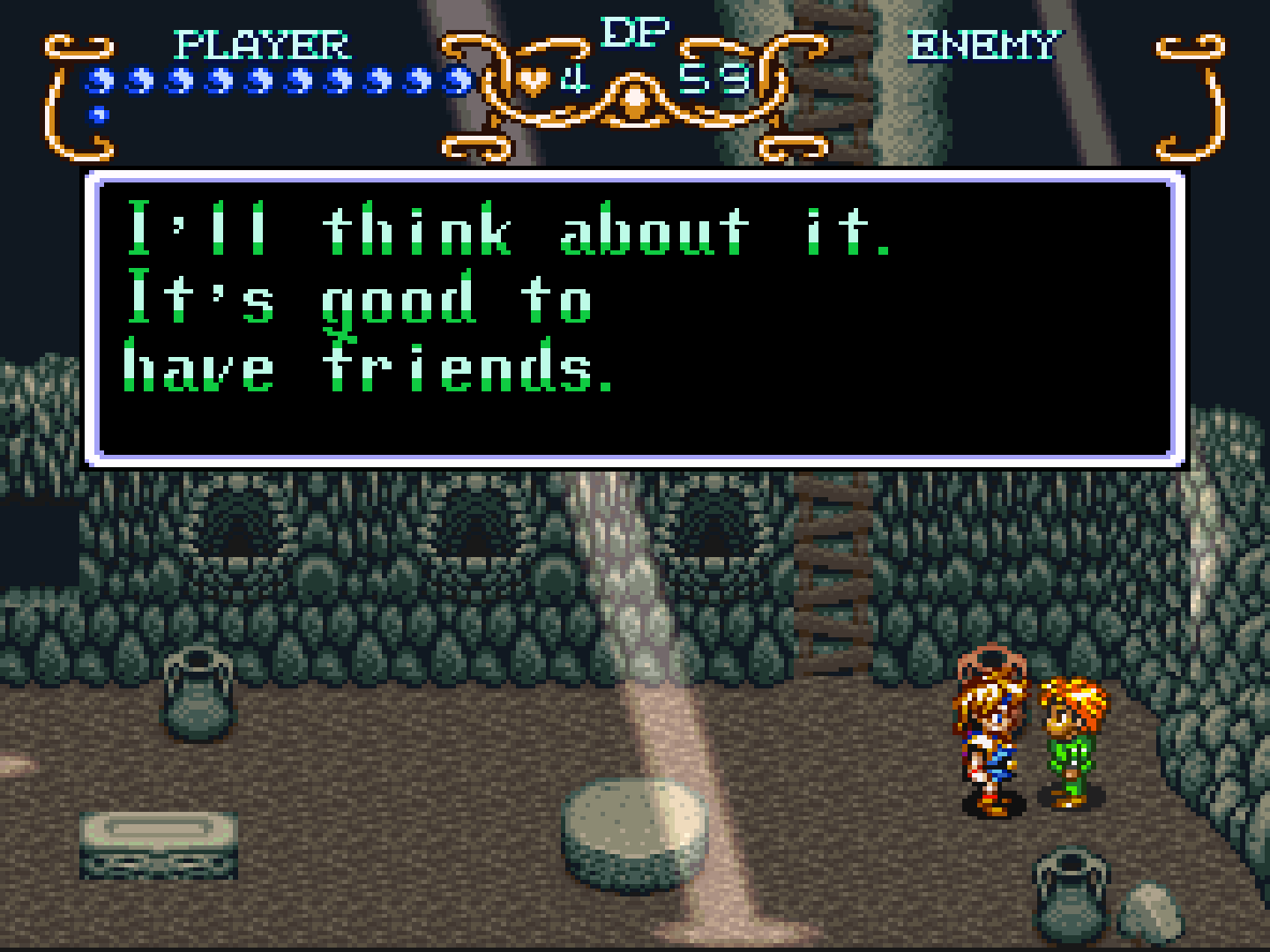 Now to talk to Lilly. 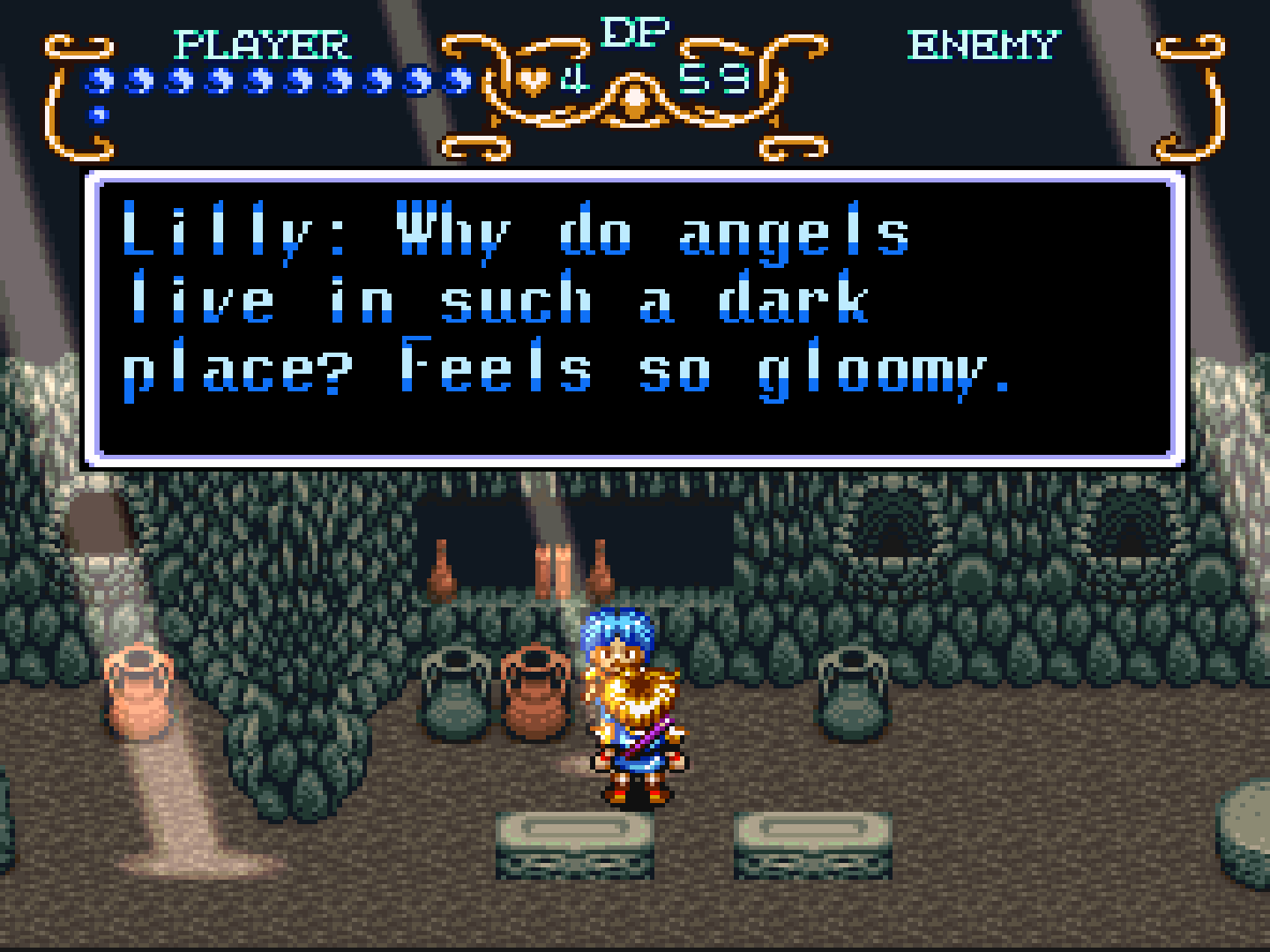 Maybe a long time ago, angels used to live above the skies, then they descended and gave up on humanity, and forced themselves to live underground.

Erik's still getting used to the sun after being in an underground tunnel for a month...

Neil has another hypothesis regarding the Angels. 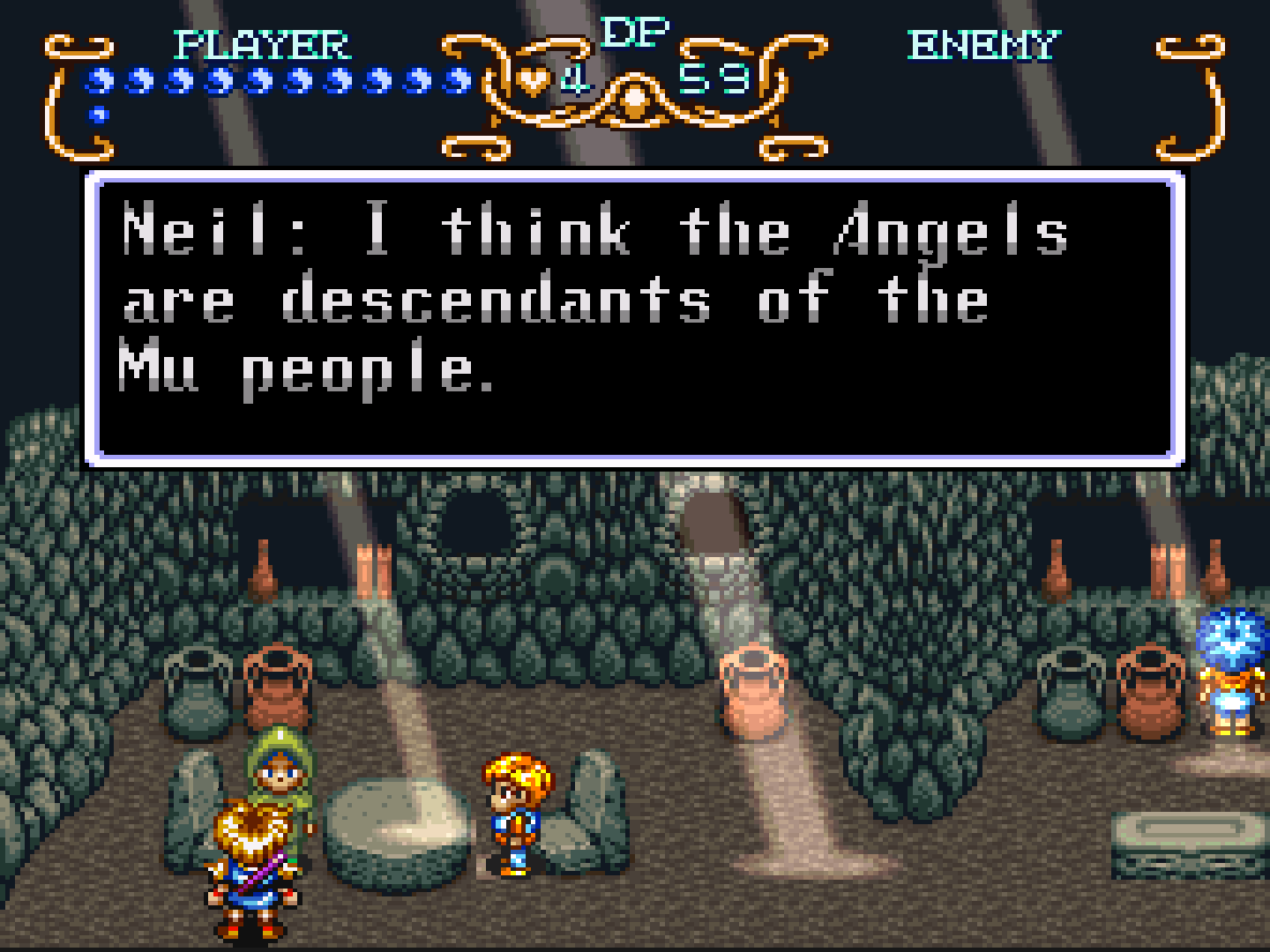 Angels as descendants of the Mu? Hmmm...but why do they call themselves Angels if they live underground?

Now let's see where Kara ran off to...

Yikes, the people of the Angel Tribe are really tall! 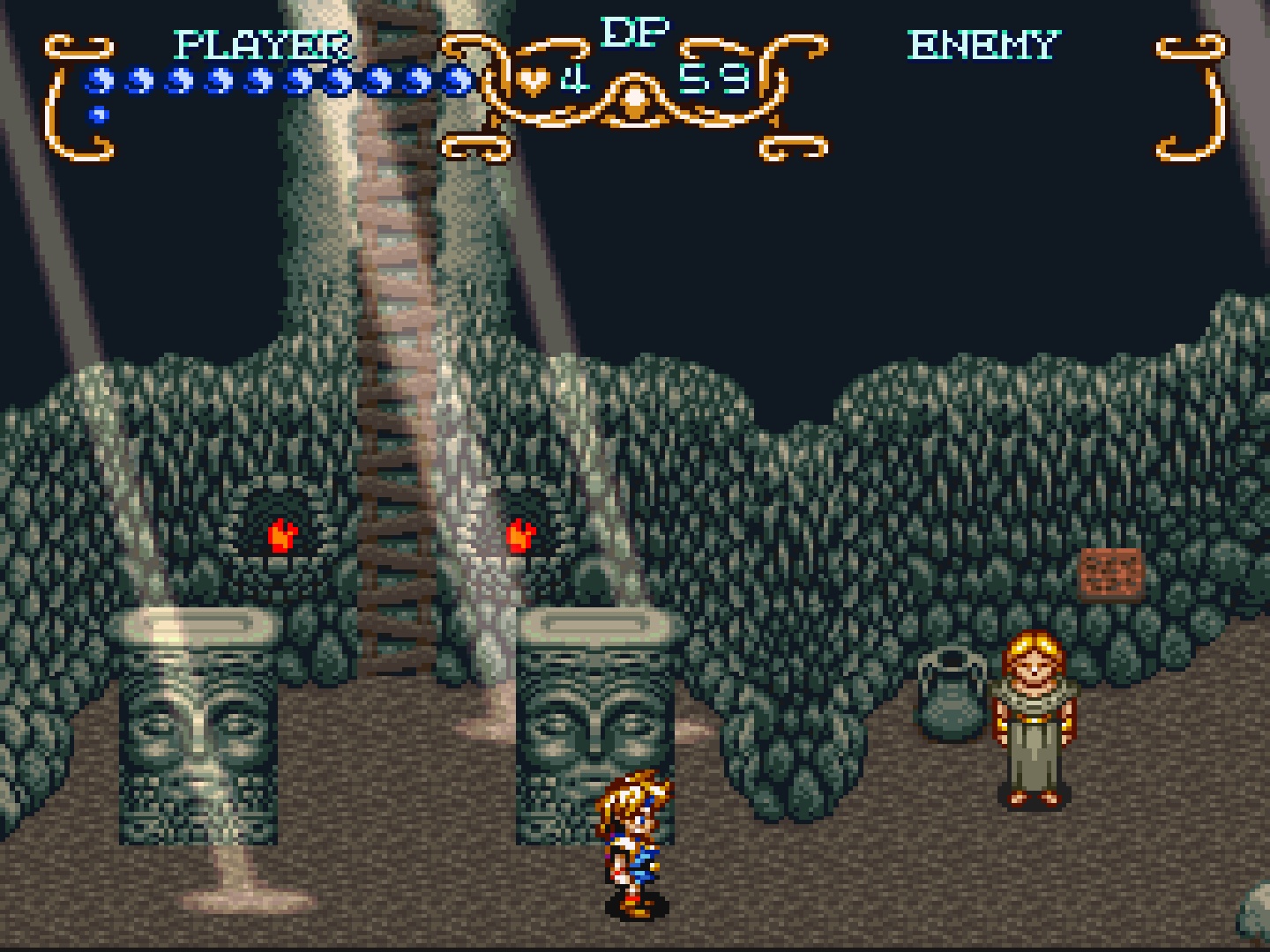 Unfortunately, they have one weakness: the sun. 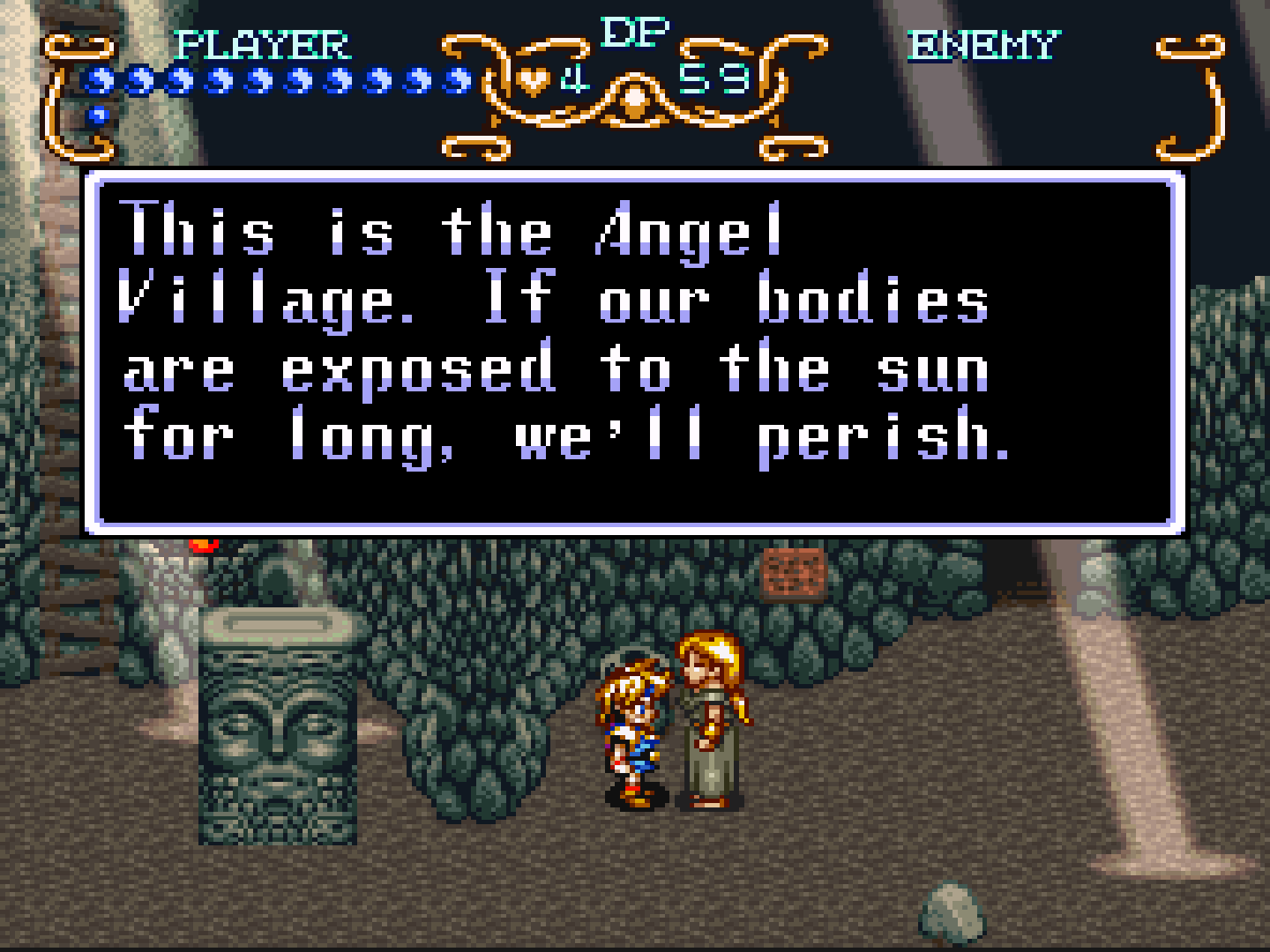 The Angel Tribe feel nothing either. 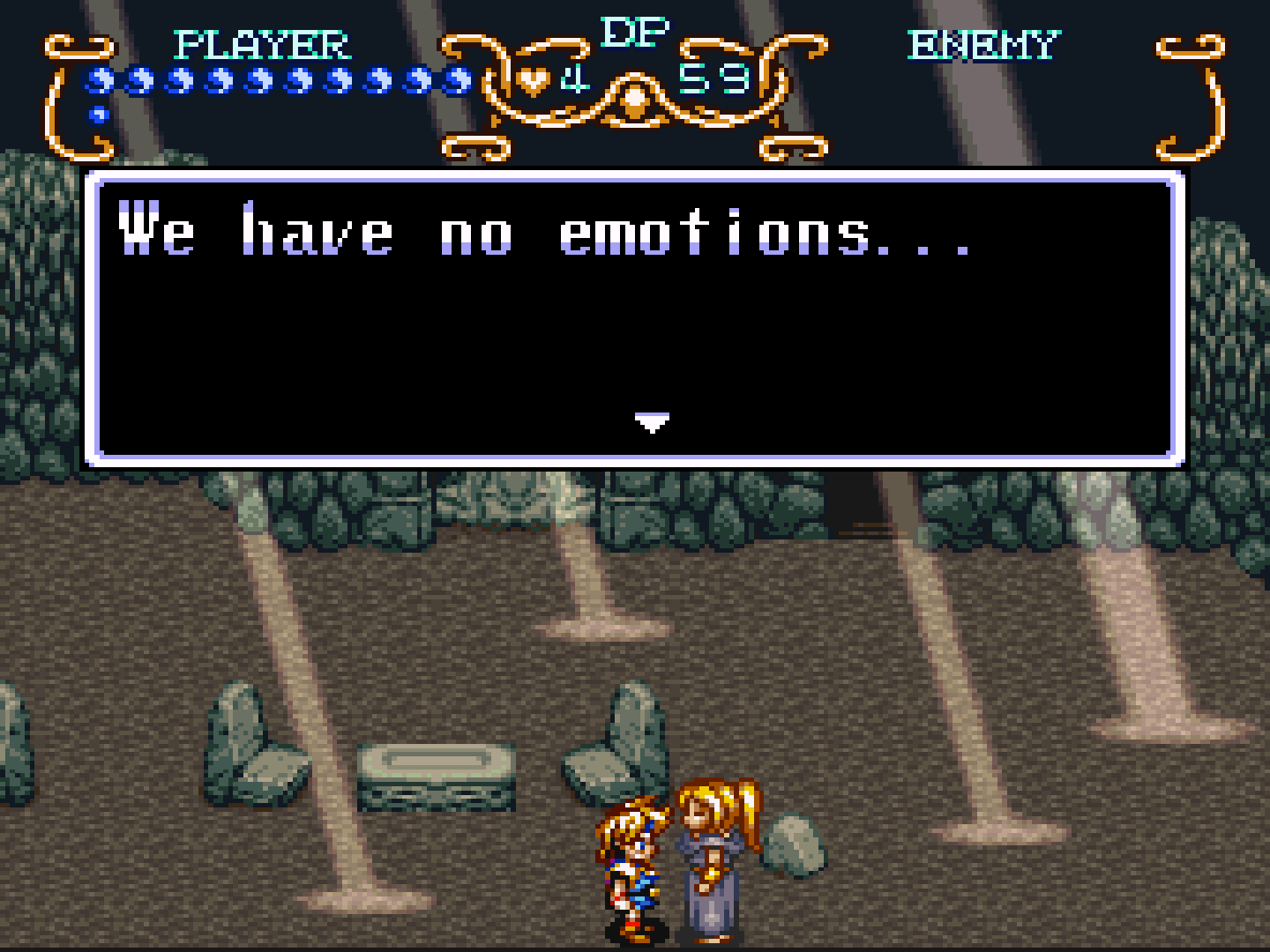 Angel Tribesperson: "I've neither laughed nor cried since the day I was born. I just survive..."

One Angel tribesperson's "heart aches" whenever they see the ocean.

Heading underground, we see lots of blue flowers growing on the river... 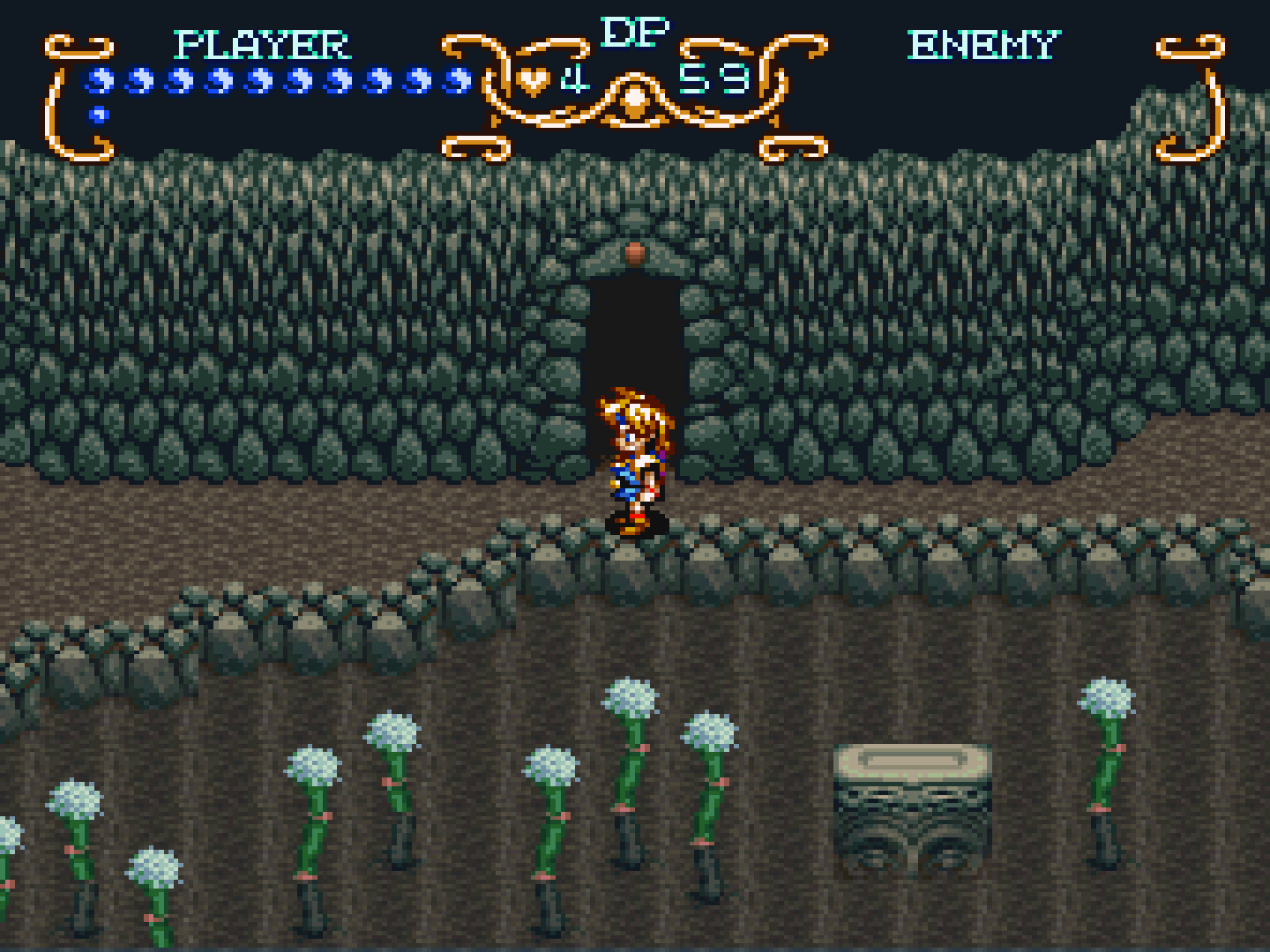 At the west end of the river, near an Angel harp player, we meet the Jeweler Gem once again!

We've gotten 11 Red Jewels total! After getting eight, we get our health boost! Now we have 22 HP total!

We take a peek at some of the rooms in the village. There's plenty of pretty-faced Angel portraits and statues. There's even a room where Angel couples are dancing!

The layout of the village is mostly upper part land, lower part river. 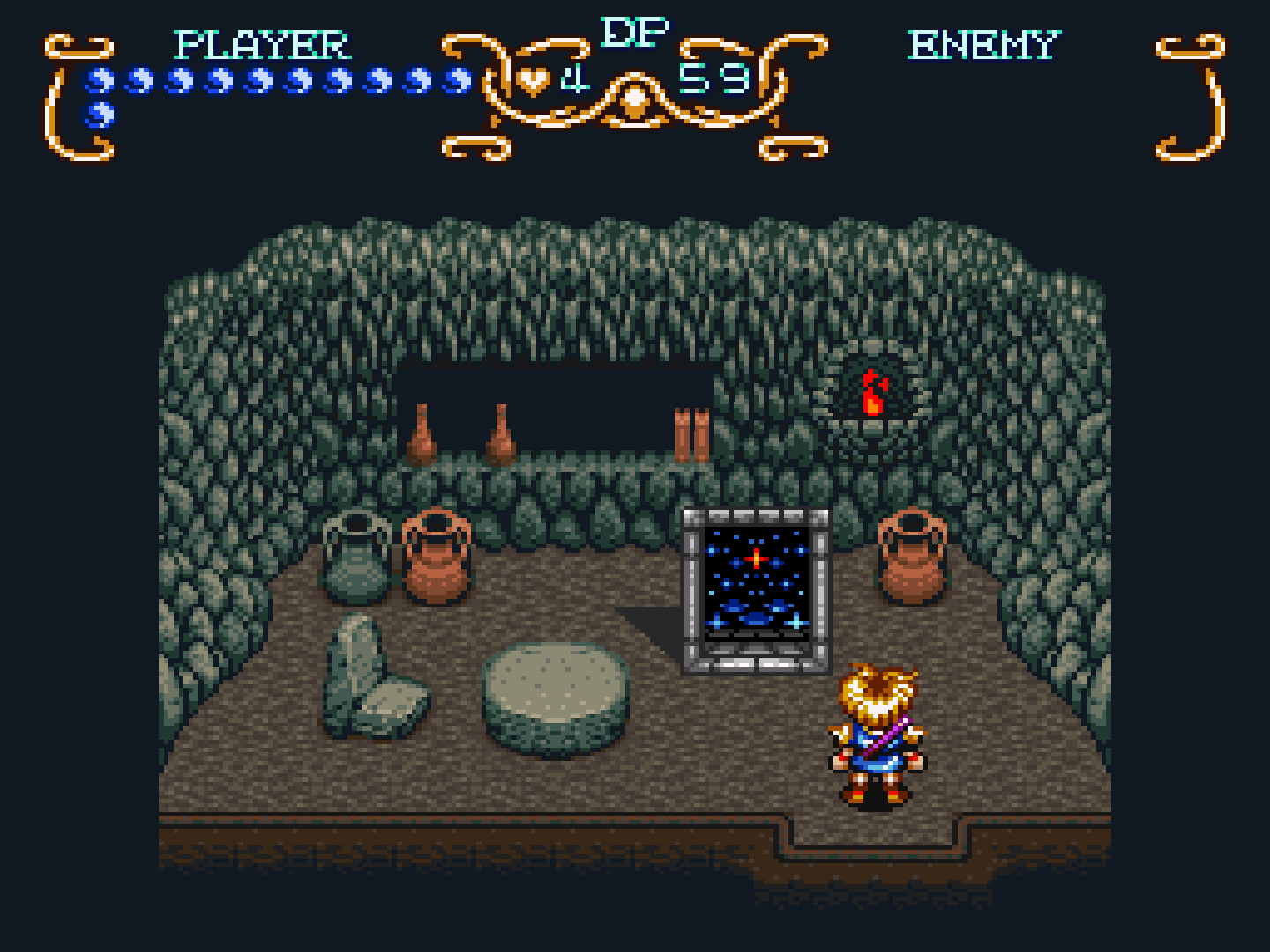