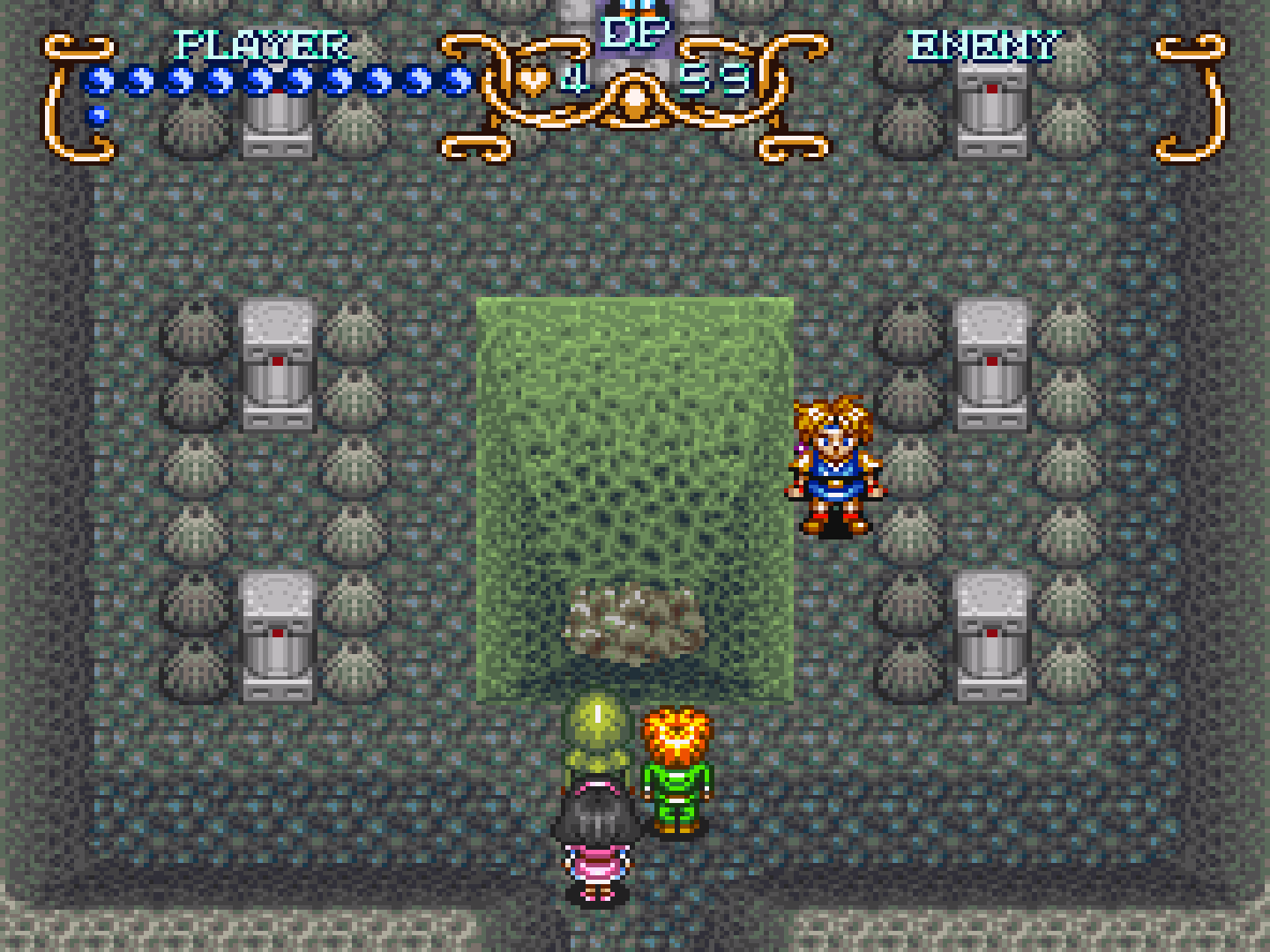 ...and the rest of the gang comes!

It might be because of the vampires vanishing that they returned.

Neil asks Will if he's alright. Lance asks where Lilly is. Lilly flies out of Will's pocket, and turns back into a human.

Kara doesn't think that matters at this point. She's thinking about how to escape Mu. Erik unties himself, and walks over to Will.

Lilly and Will explain about what Rama, the leader of Mu, and the ghosts of the citizens, told them. 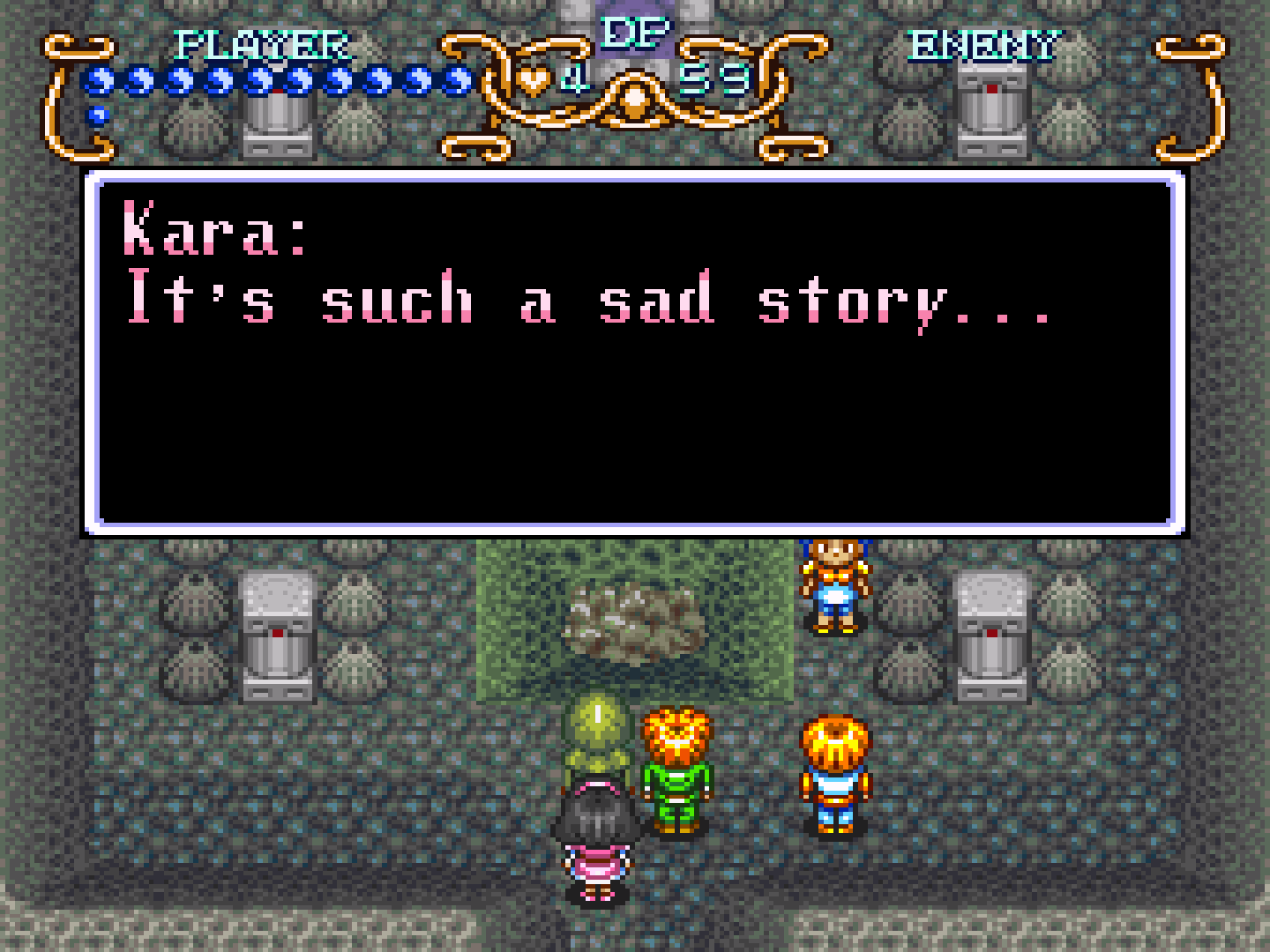 Kara: "...separated from those with whom they lived. Others remaining underwater..." 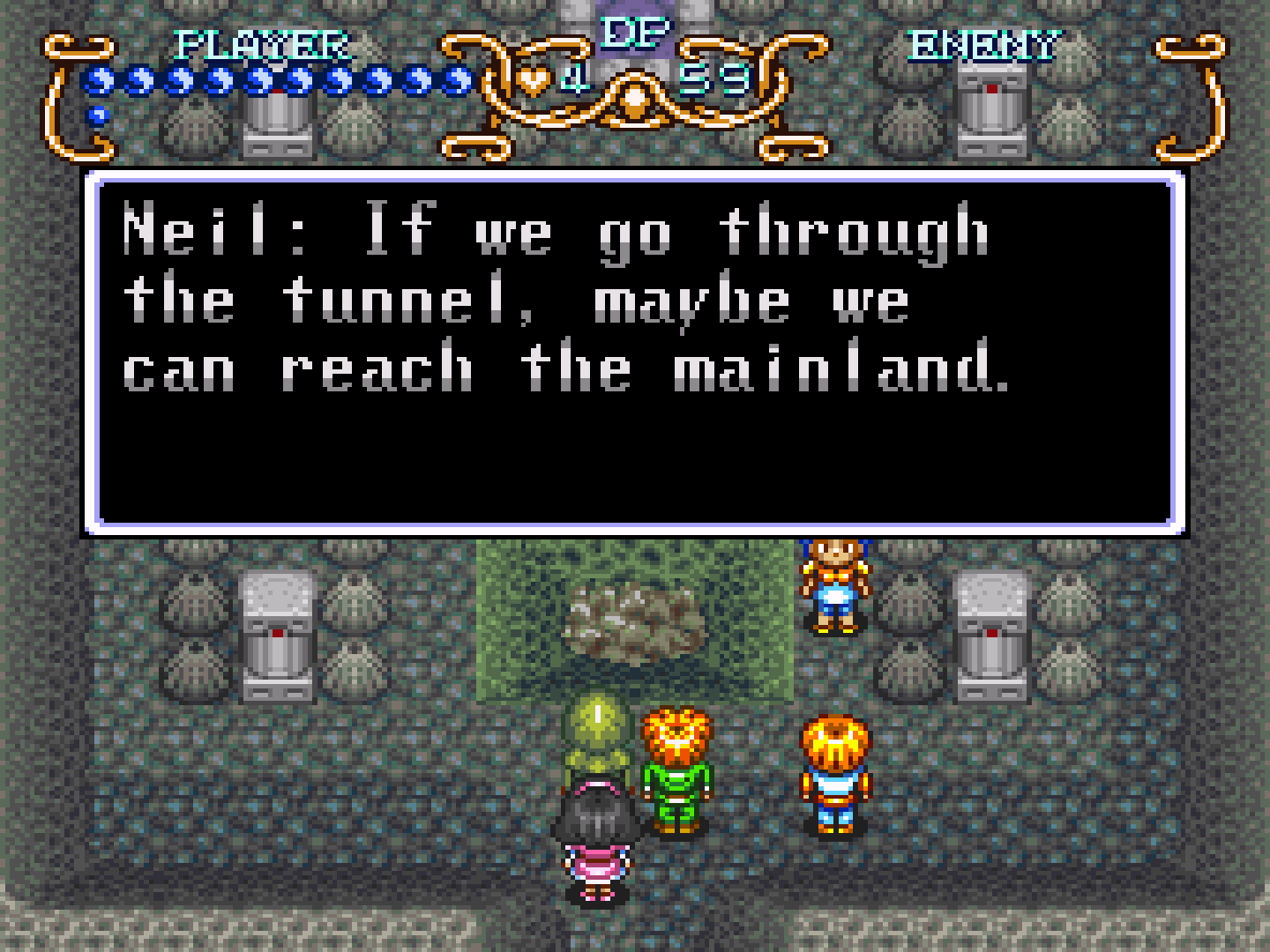 The gang crosses deeper into the tunnel...and gather around a campfire... 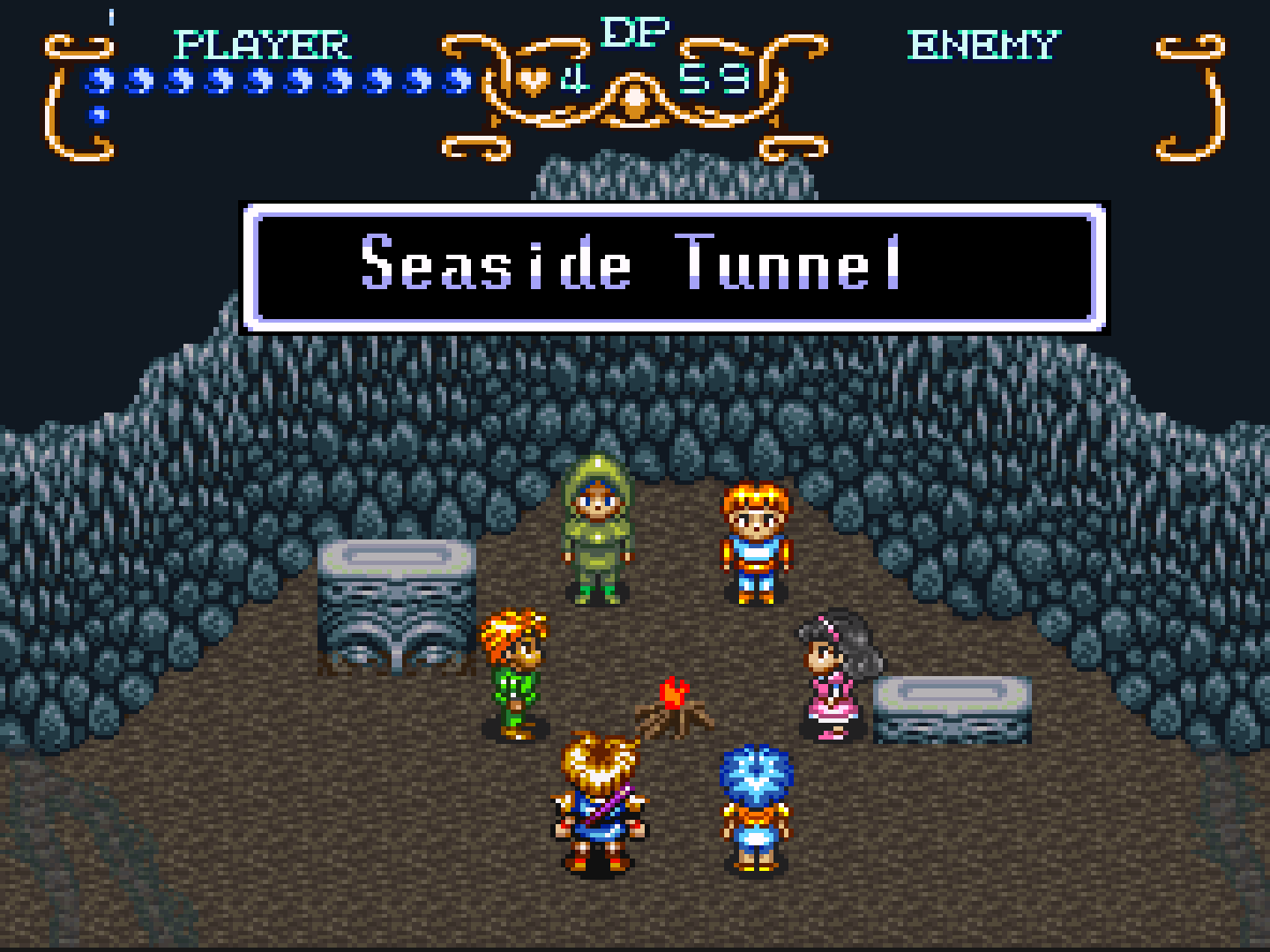 Will: "Five days have passed since we entered the tunnel. The same scenery goes on and on. It's hard to keep track of time..."

Neil decides to rest. Erik's everything is completely tired from the five days of endless walking... 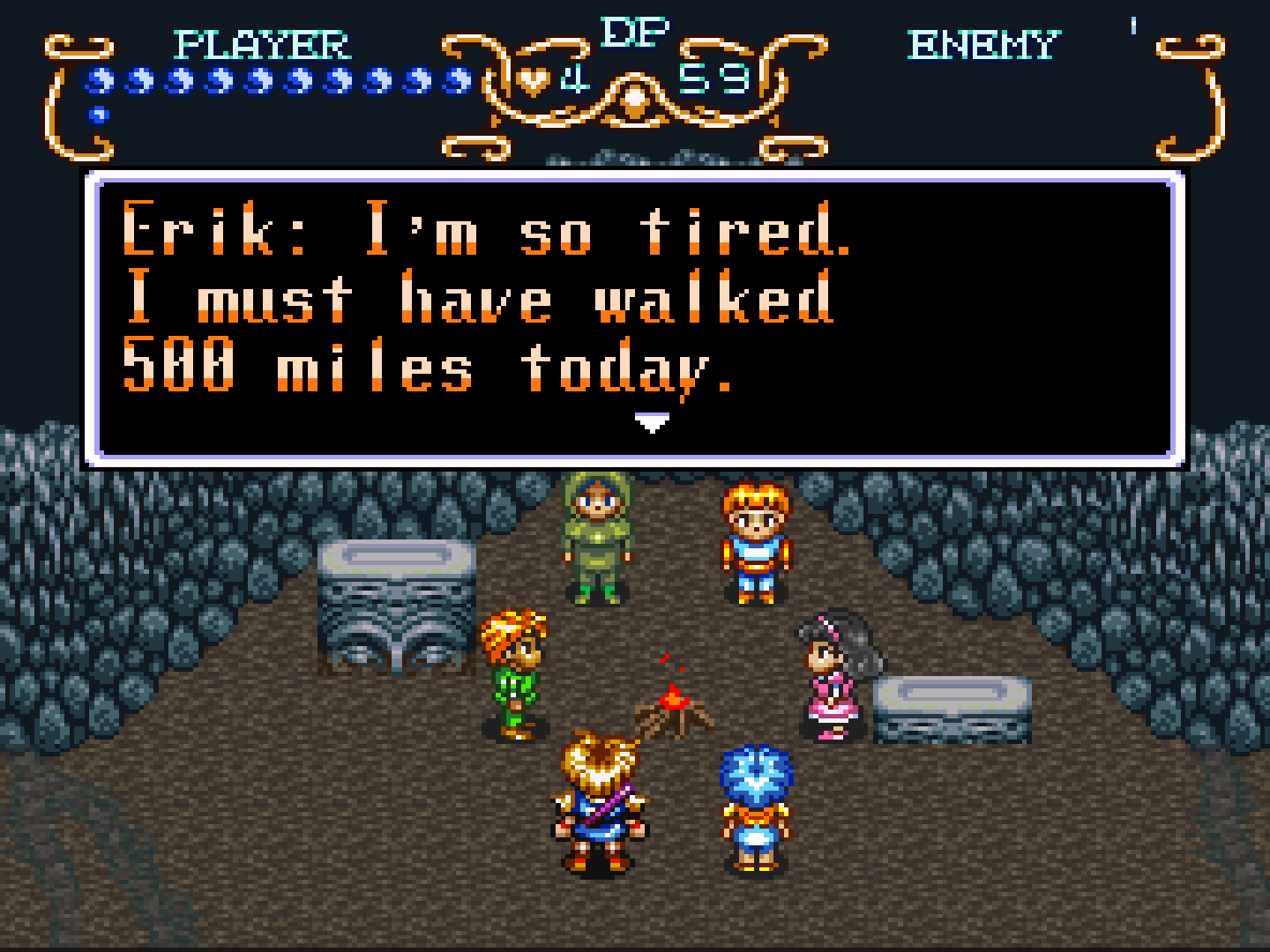 Lance can't believe all the walking they had to do...

Kara tells Lance "[he's] been tired ever since [they] started this trip."

Lilly: "Lance's right, Kara. I think all of us feel the same way!" Lilly decides to eat something. Everyone scatters from the campfire.

Erik's off in the corner, and tells Will not to look!

Lance wonders how long this tunnel is... 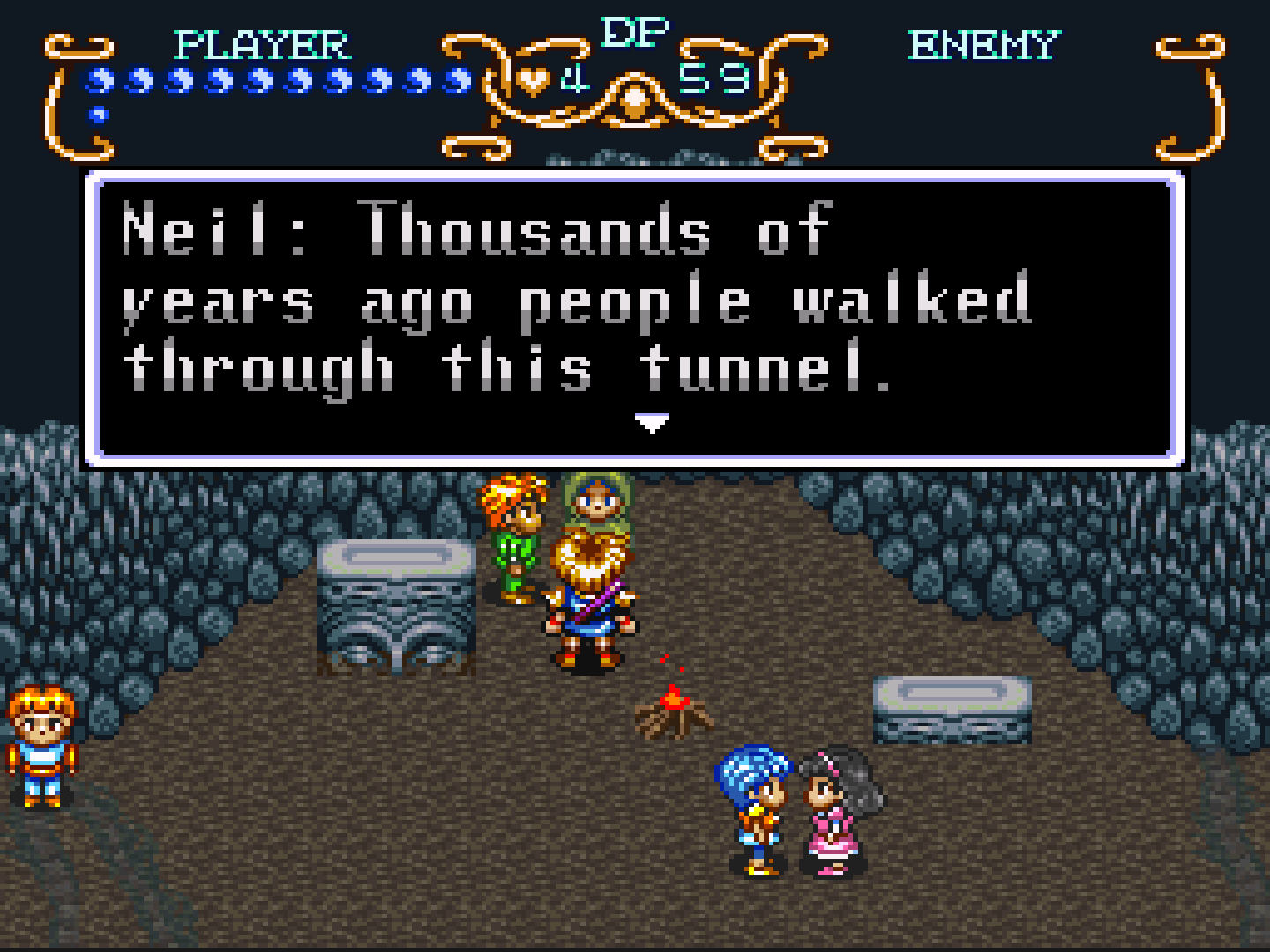 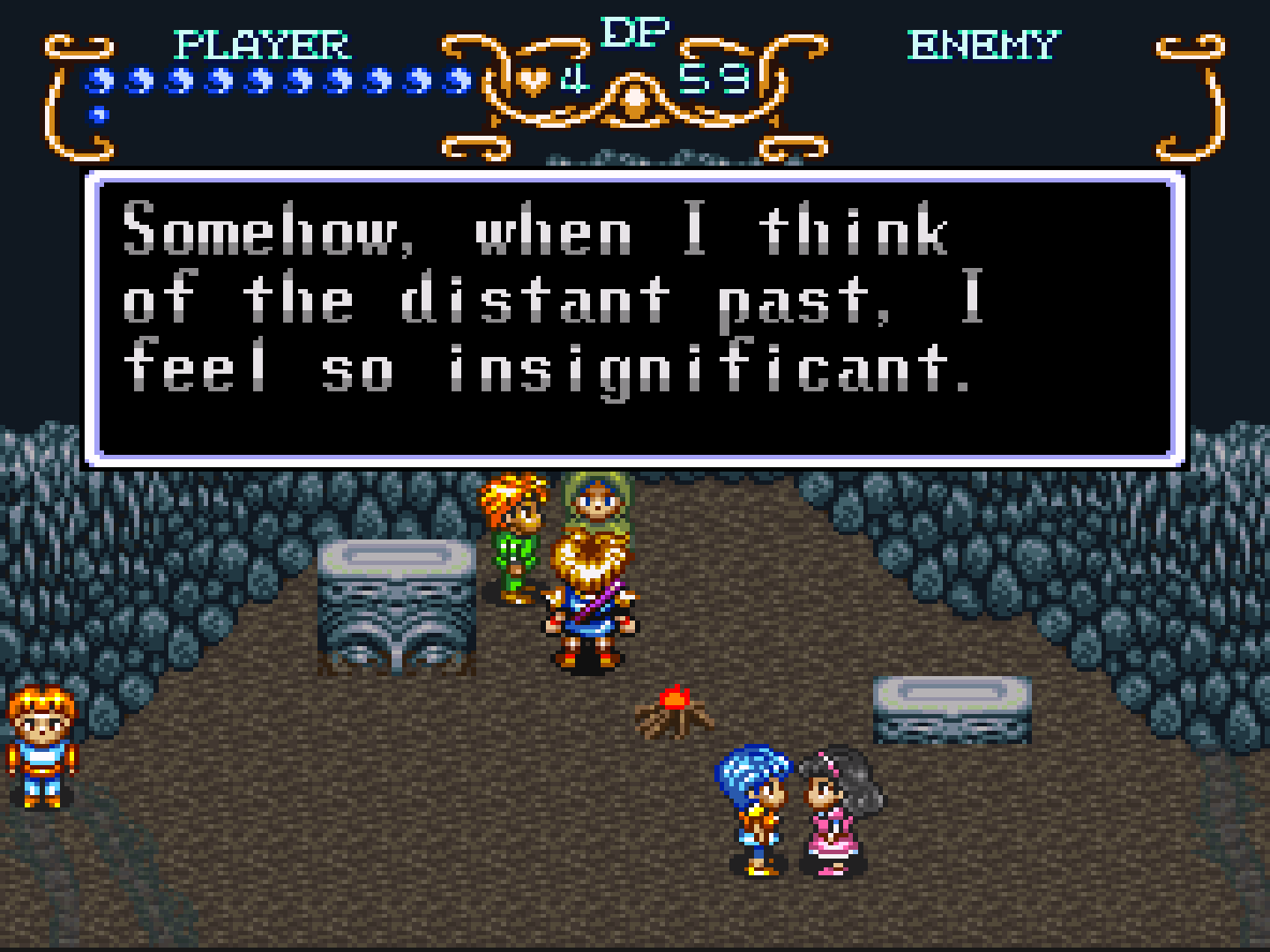 We are but insignificant beings in the annals of history... 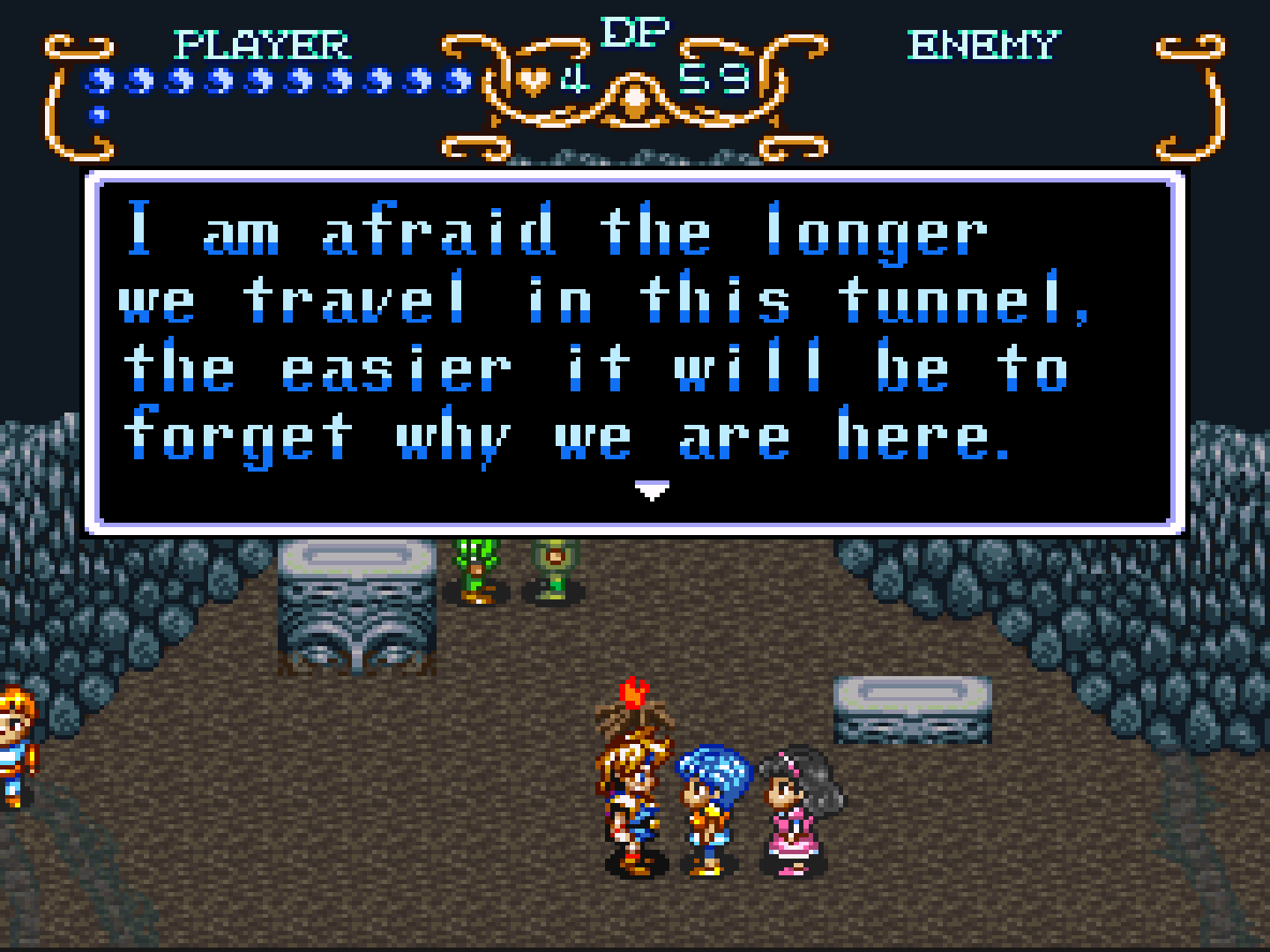 Kara still wants high quality stuff like steak and a salad, and mentions her dry skin from all of the food she's been eating so far. Hee, oh Kara...

I have Will wander eastward, where we see a stray mushroom. 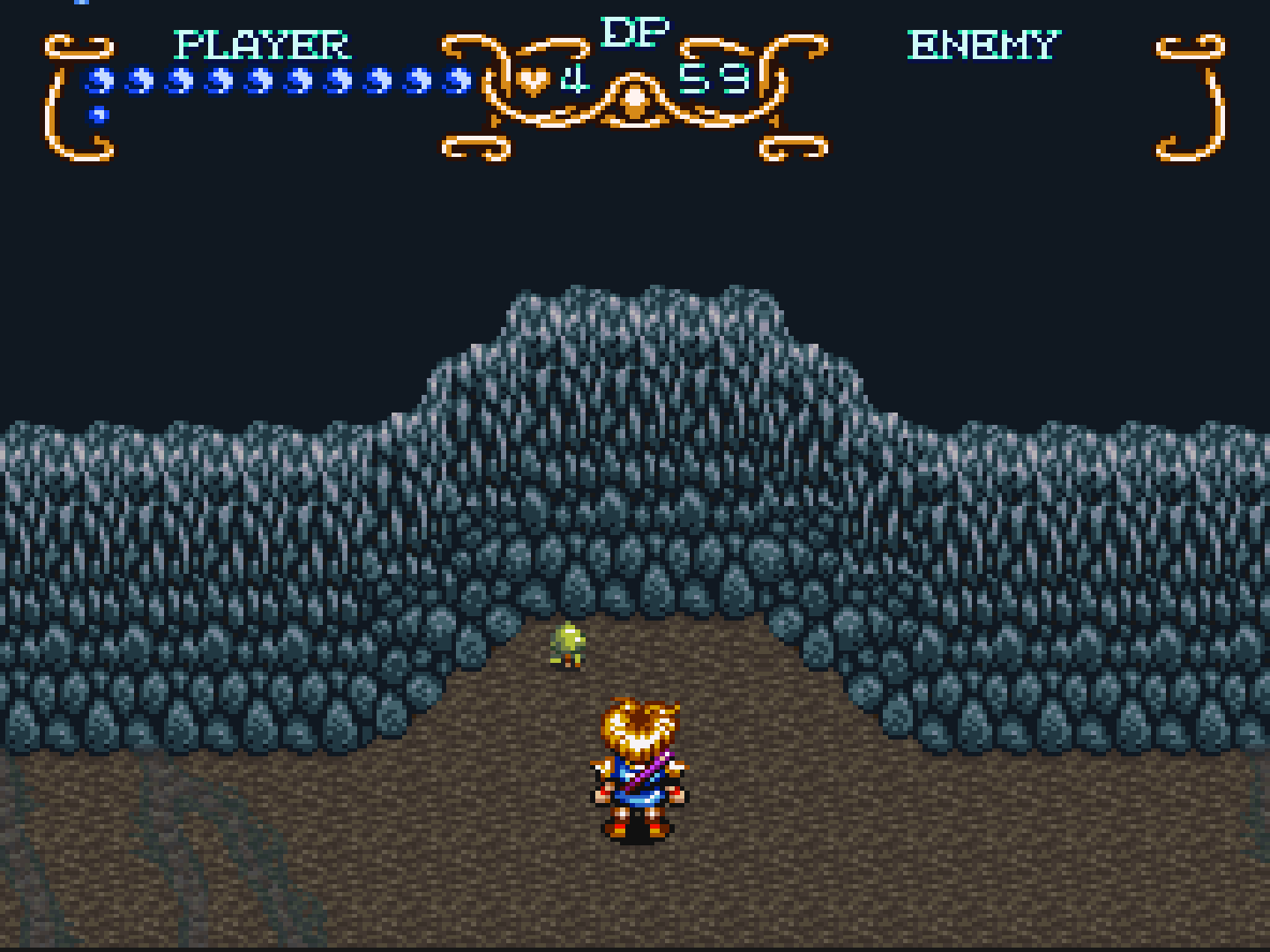 I hope it's not poisonous. 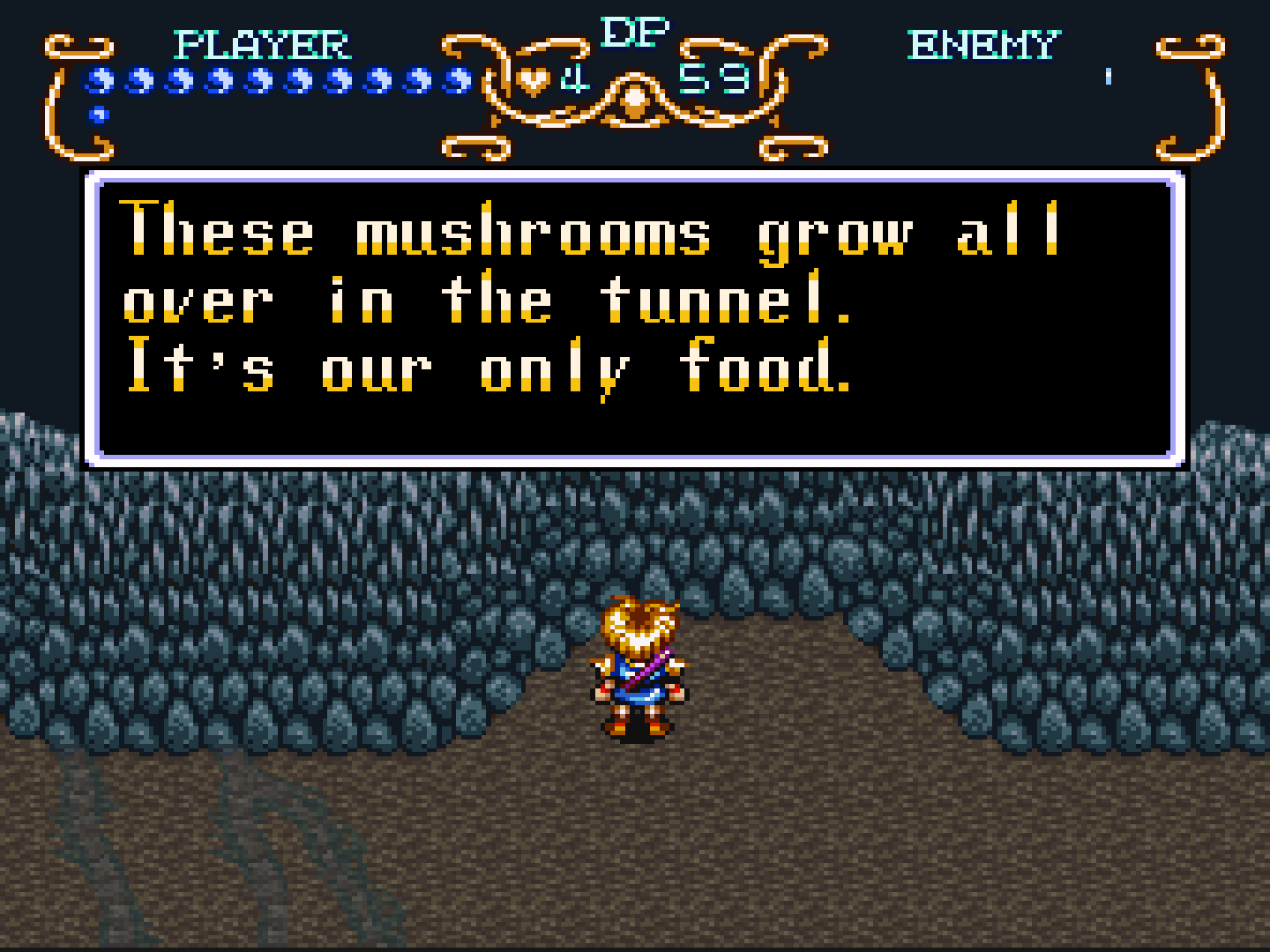 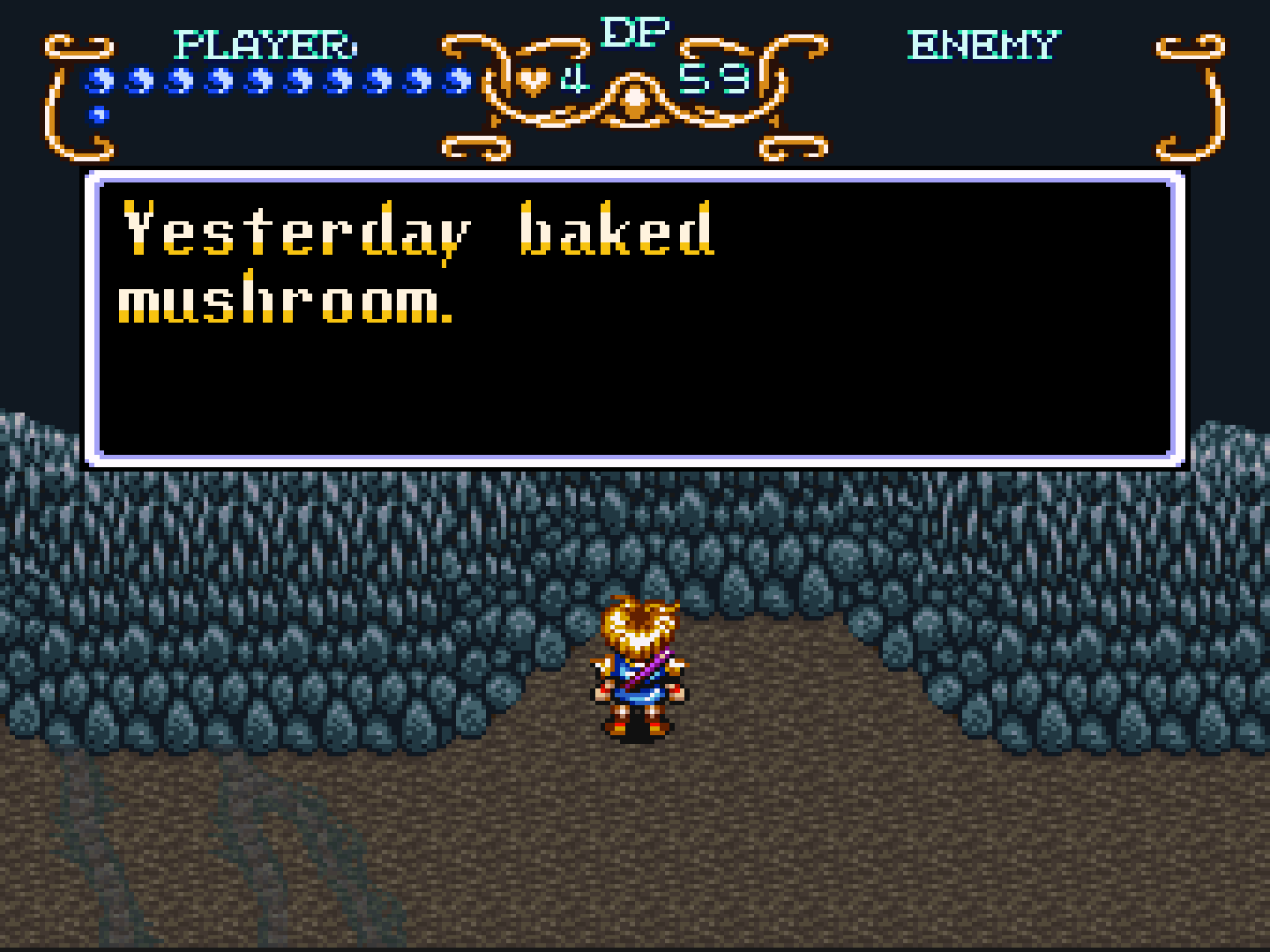 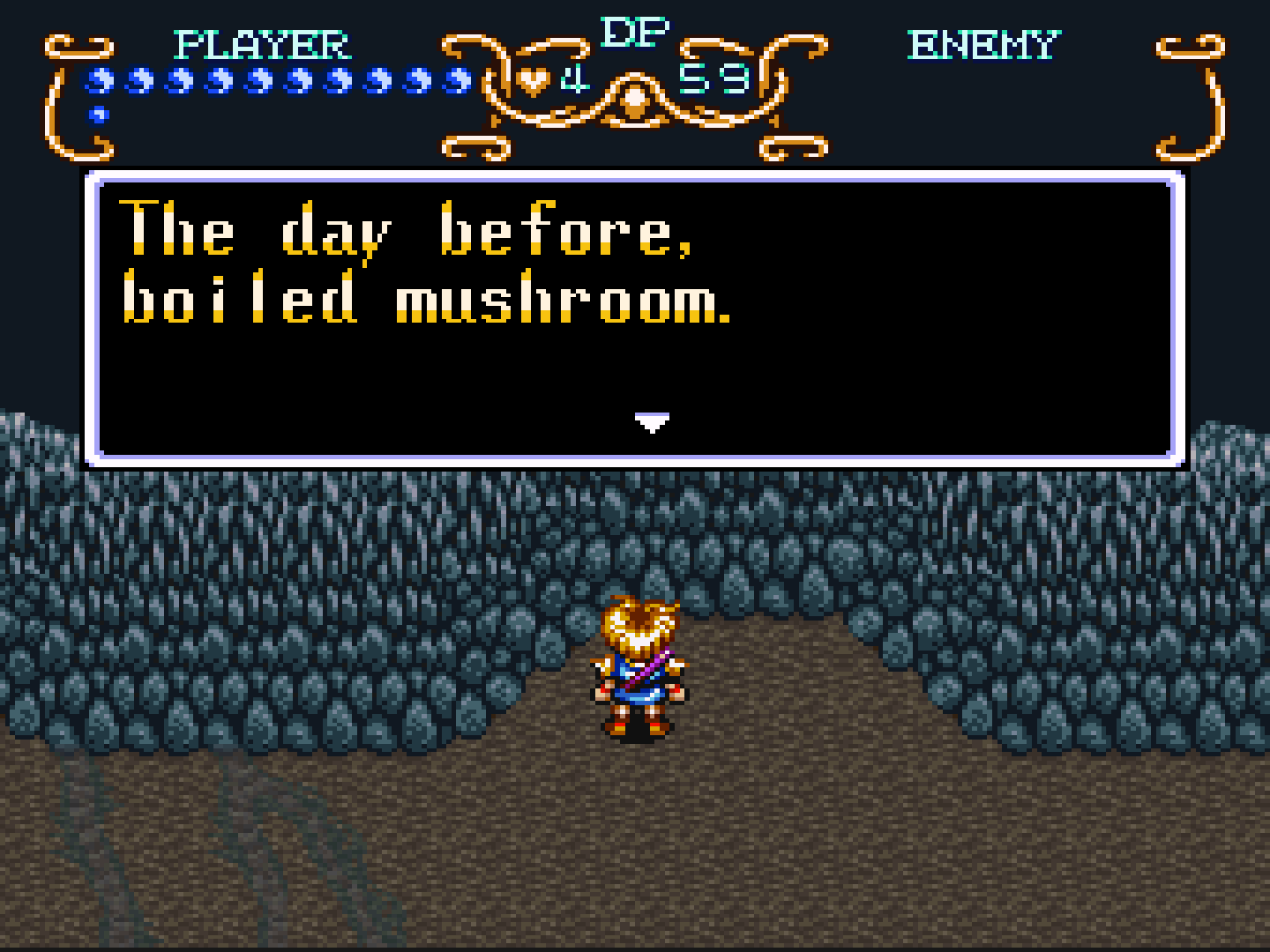 Returning to camp, Kara's not happy about eating more mushrooms for dinner.

"In this way, another day passed slowly..." 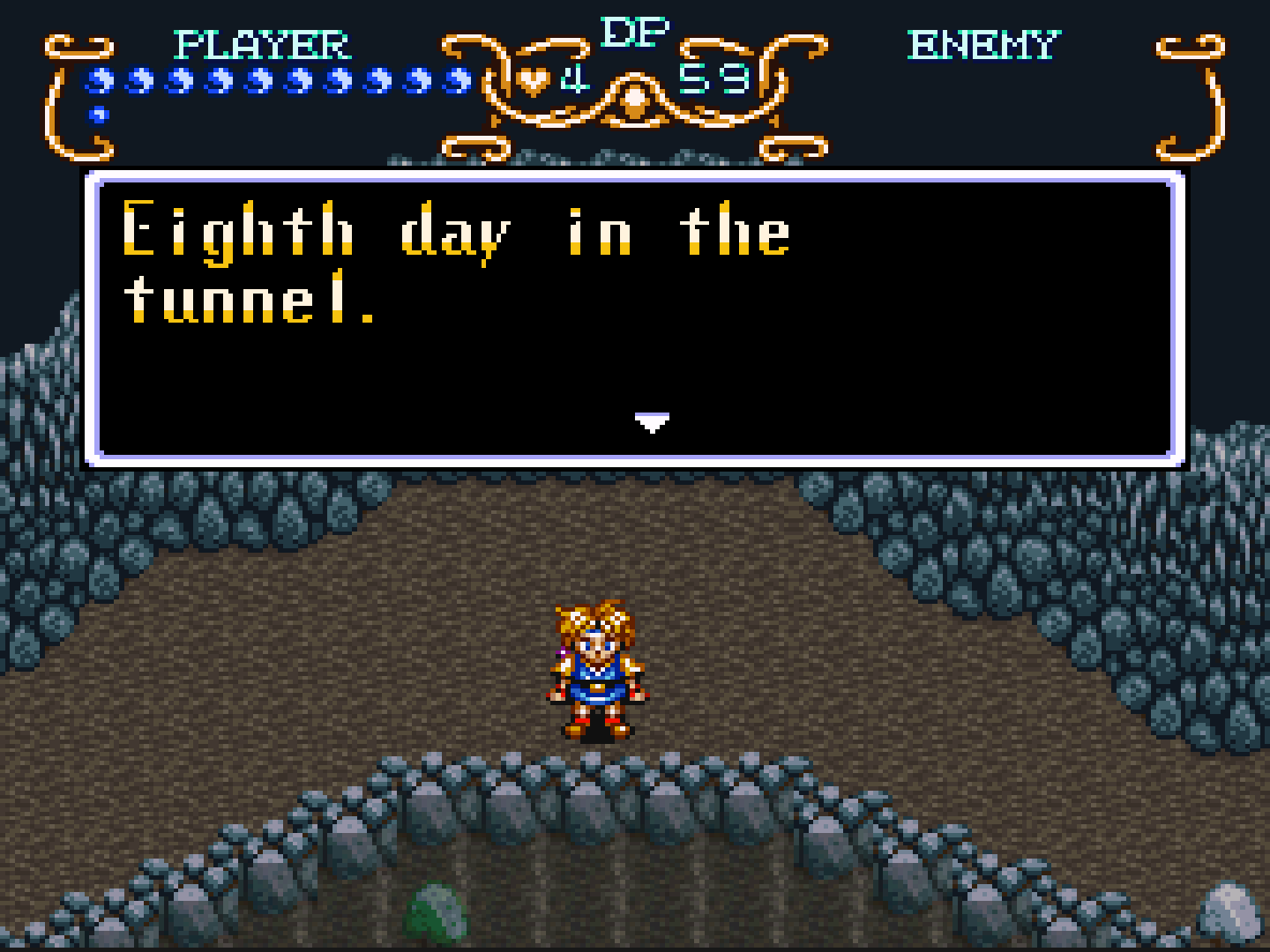 Will: "Unable to sleep, I stared at an underground river....."

Will: "I don't understand it myself, but...I can use some strange power, and my body has changed to the body of a warrior. The change seems to have started when my father went to the Tower of Babel. I'm just starting to understand that power."

He asks Lilly why she joined this journey. 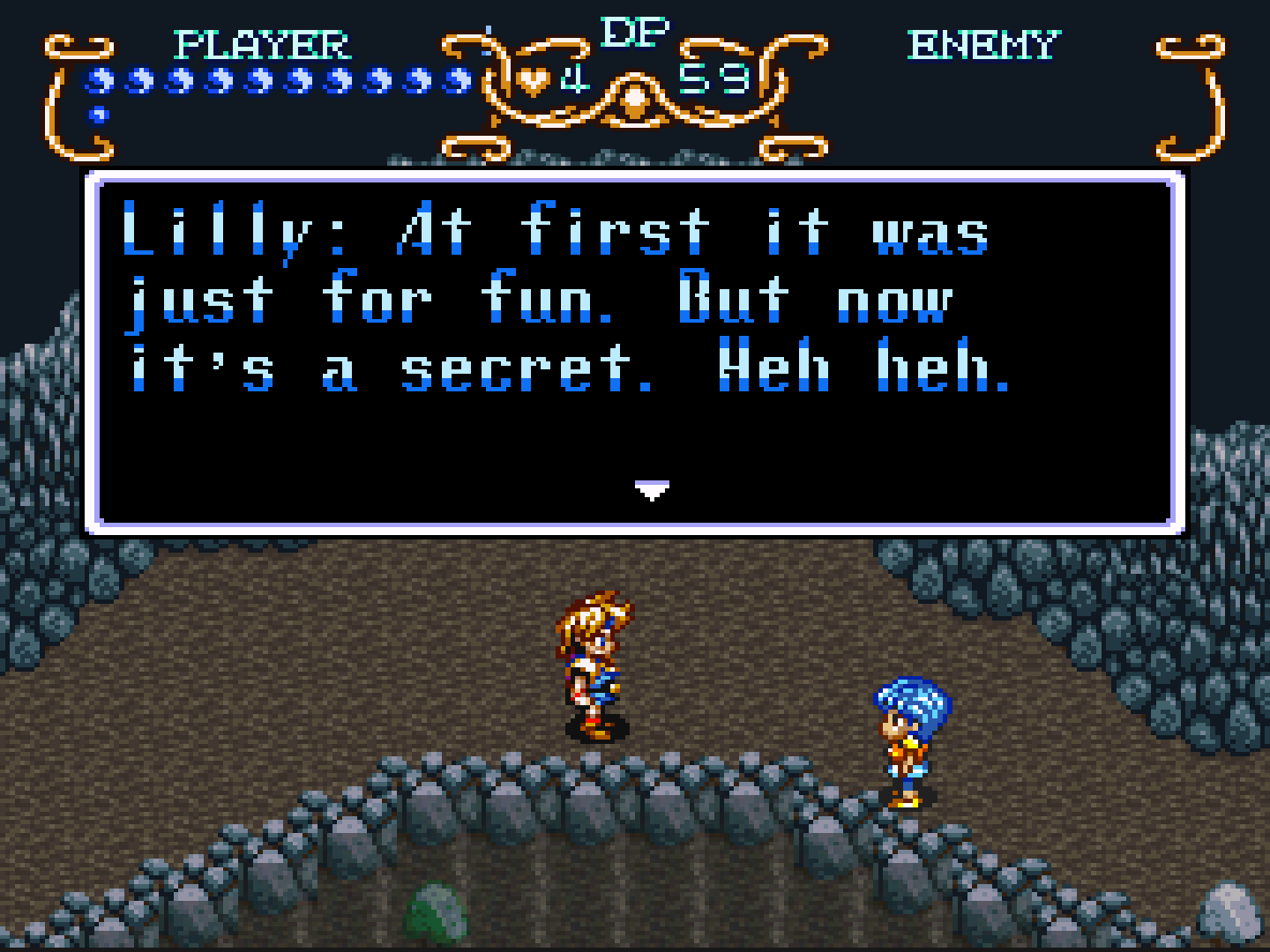 Two weeks have passed, and everyone's still in the tunnel! Where's the end???

Kara mentions an "odd sound" coming from the tops of the tunnel. Lance points it out too, but he's too tired. 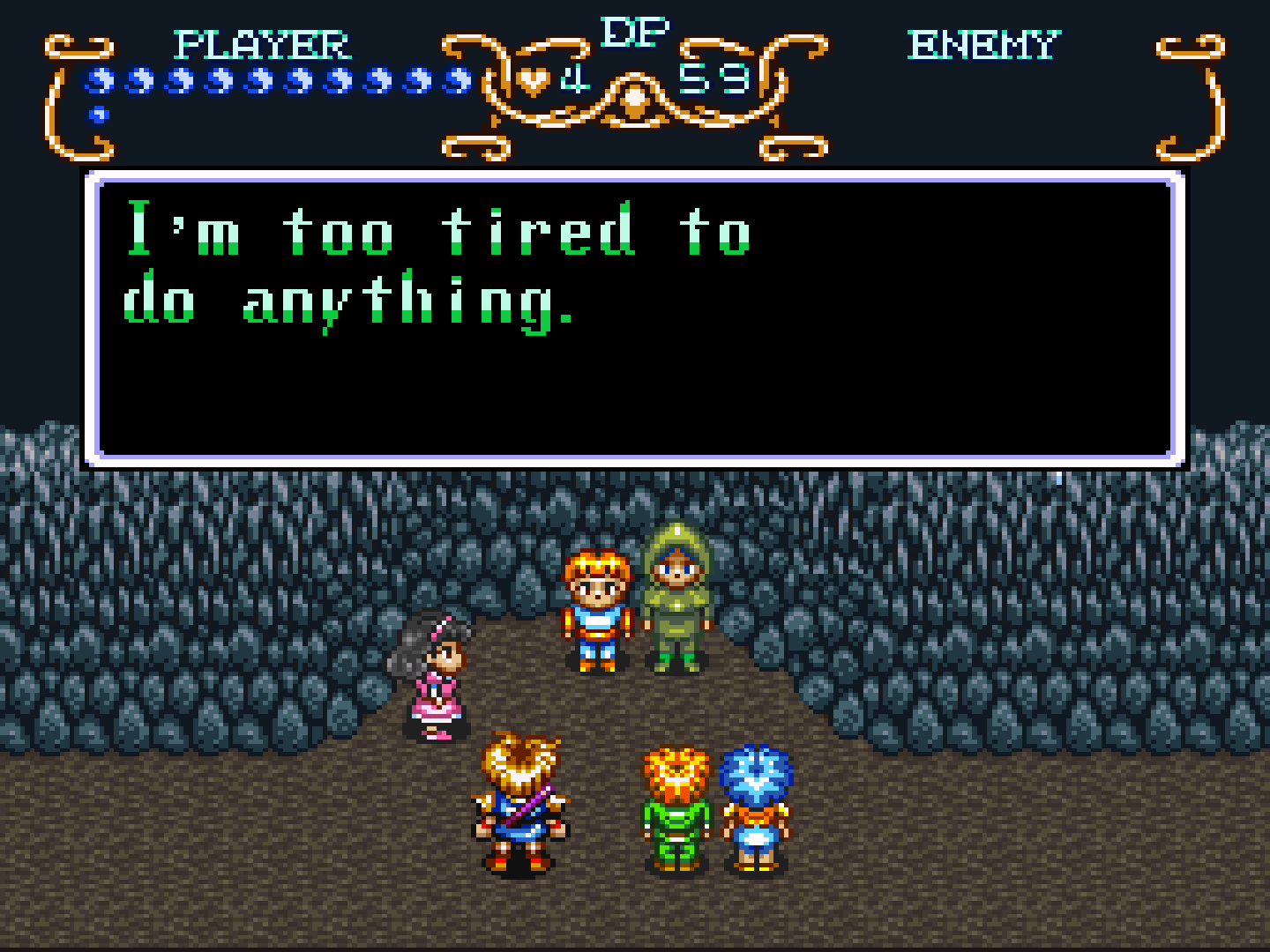 That should be a reaction pic.

Is that a boulder? No, there's now a whole lot of shaking going on...

The sound begins to soften a little. Neil tells everyone to be quiet. He's familiar with the sound... 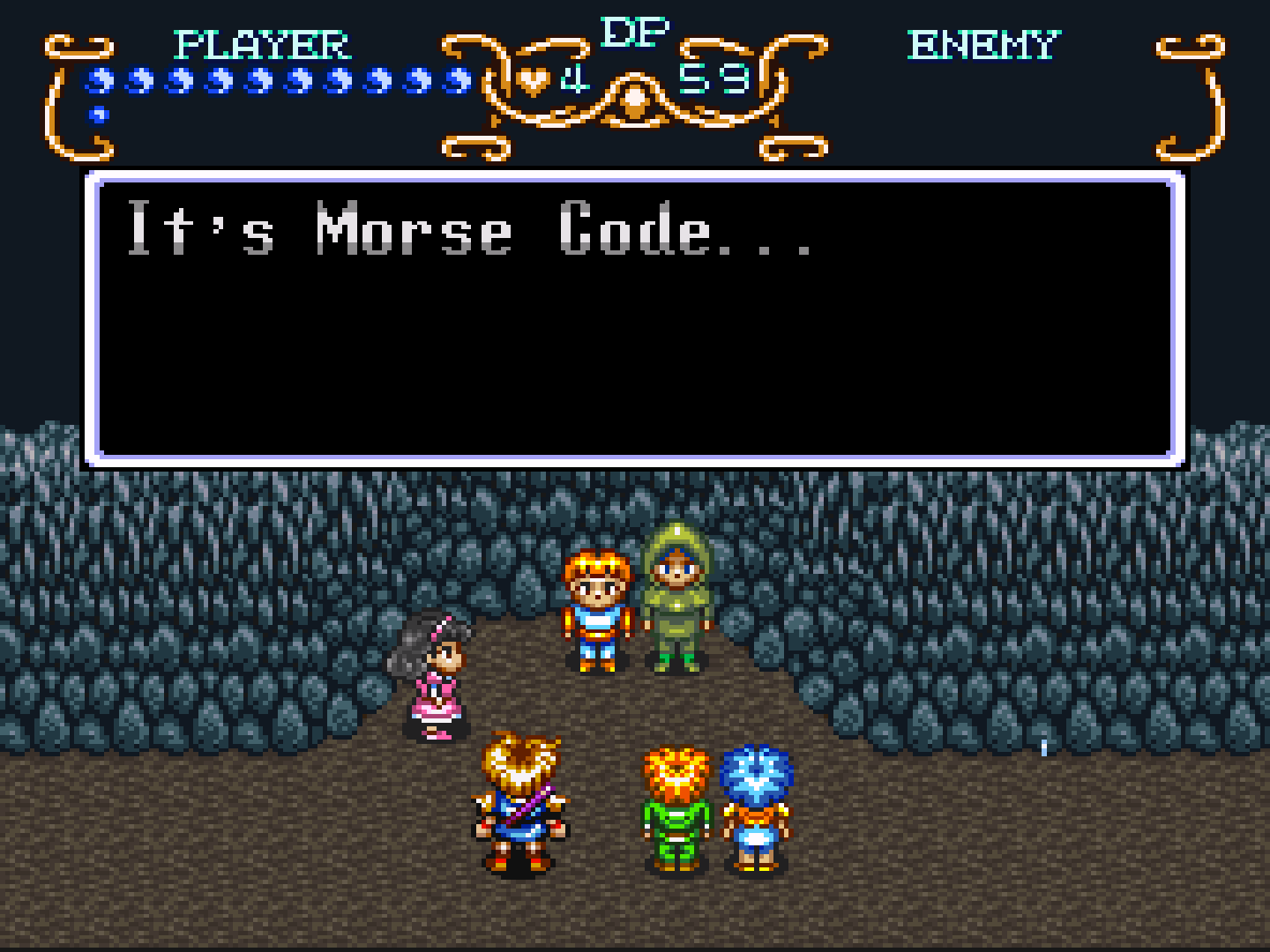 Does this mean Samuel Morse exists in this universe? 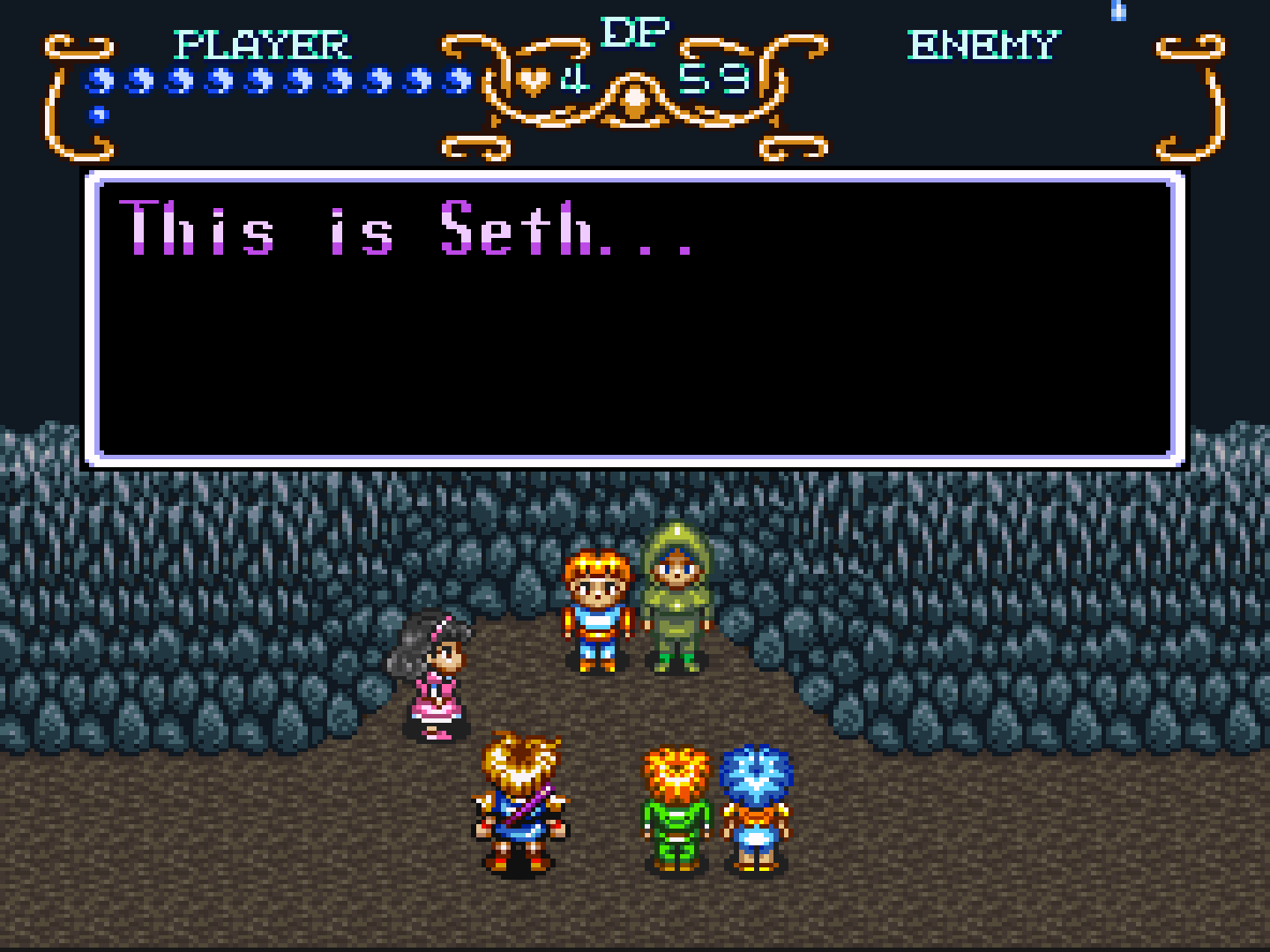 Seth's speaking to us in Morse code! Oh my god, he's alive!

Seth: "I was swallowed by Riverson...when I came to, the form of my body had that's to Riverson's. This Riverson is a creature who lives in the ocean. I don't know if its human or not." 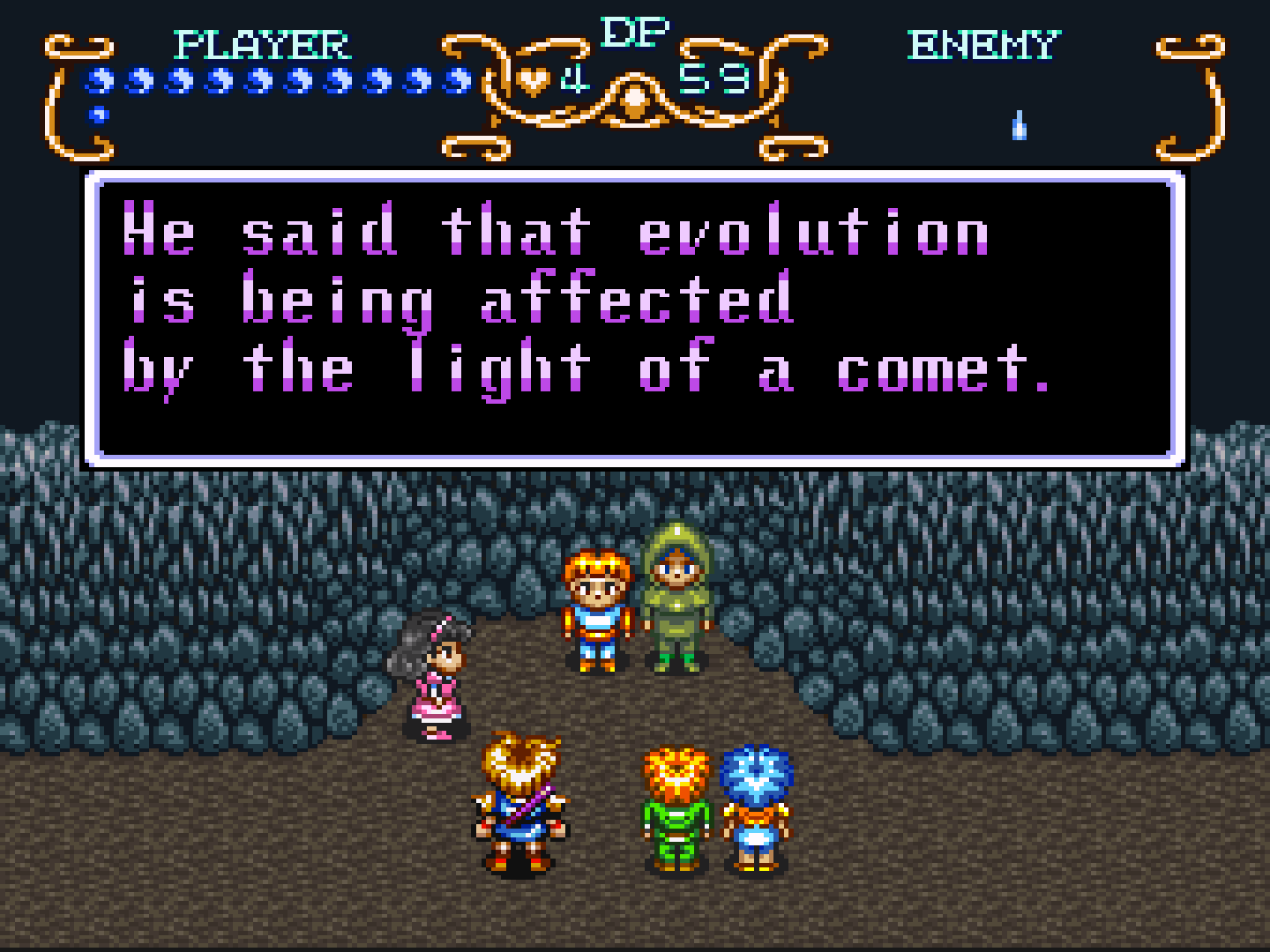 A comet? Could that be the one that's been prophesized?

Seth: "I wanted to continue the journey with you, but not in this body. You must figure out this riddle of the comet and the ruins..."

Kara's getting creeped out...

Lance: "This guy must have studied Morse code...Seth, too, did a good thing."
Erik: "But Seth didn't have a human form!!"

Neil tells Erik not to jump to conclusions yet. 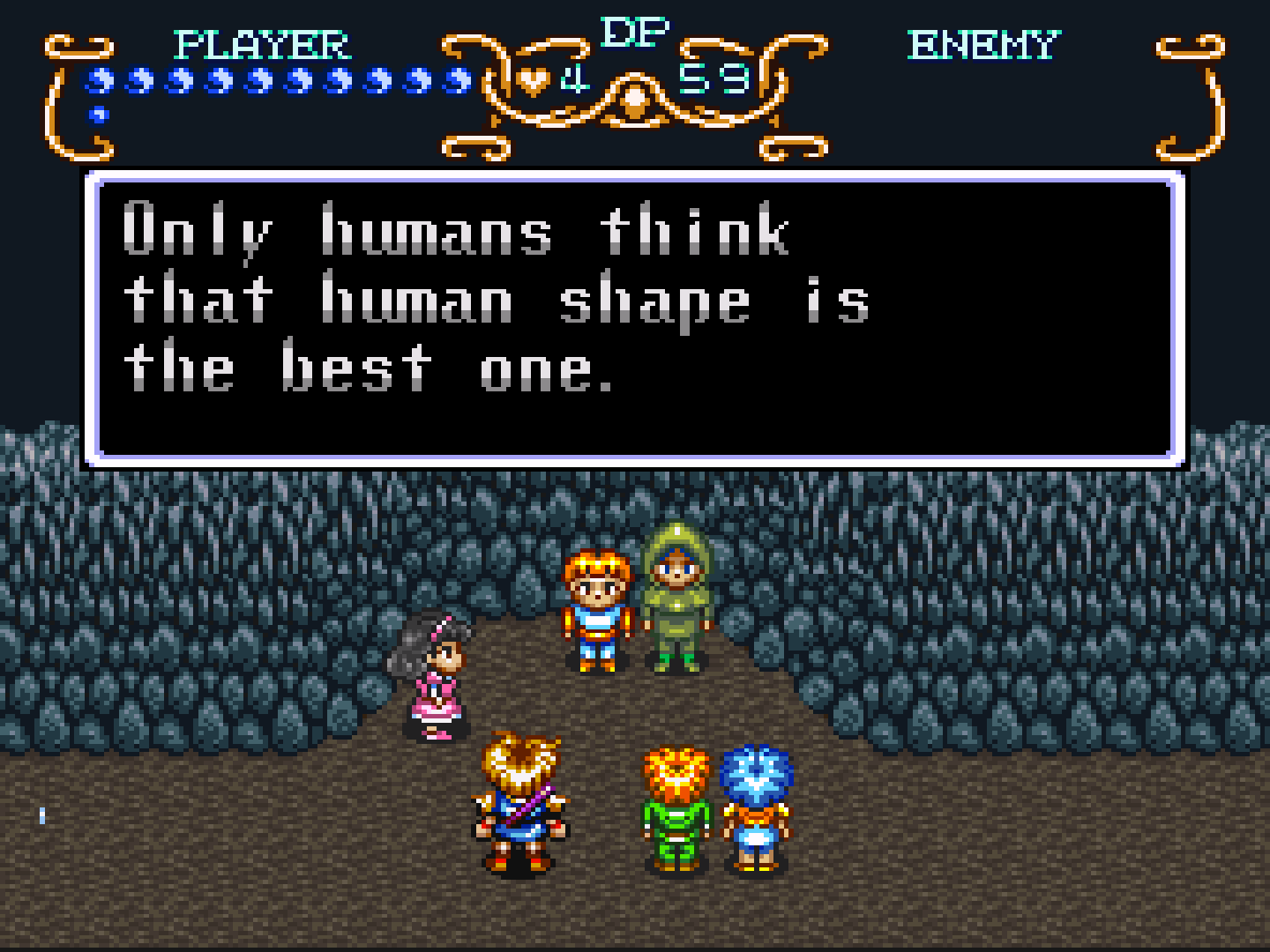 Aside: I'm going to guess that this Riverson "creature" isn't a creature at all (I thought of Riverson as a leviathan in earlier sessions), but maybe a fast moving submarine?