We continue onwards in the Land of Mu!

The rest of Mu is still flooded...

I patiently walk across the spike pits and take care of the blue slime here!

I notice a shrine ahead... 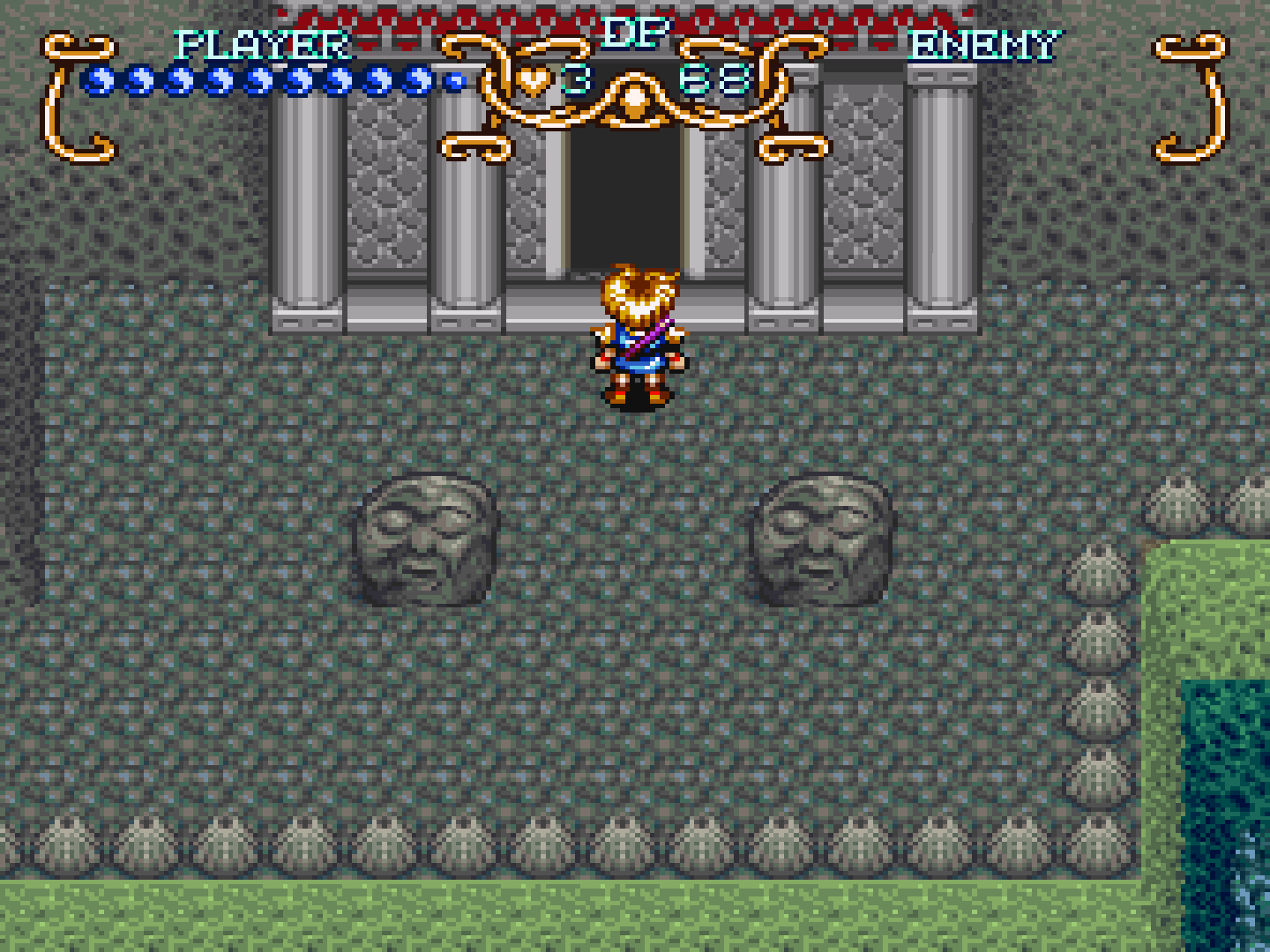 Going inside, the shrine is called the Room of Hope. 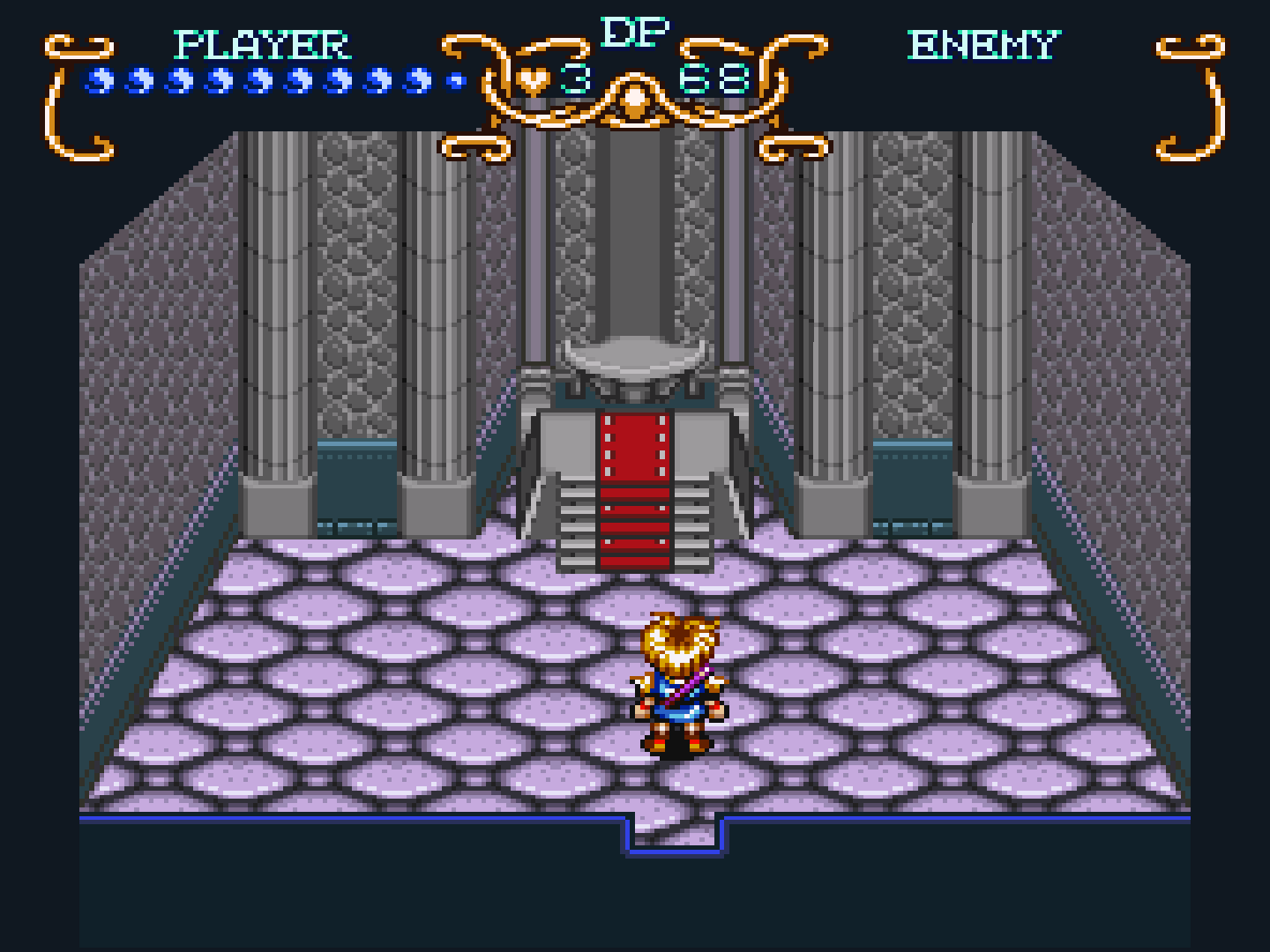 I wonder if we're supposed to put something in here? Maybe it's here to resurrect our friends.

We probably need to put a flame in the brazier in order to make something happen...

Onwards, where we're ambushed again by those floating, vanishing phantoms!

I pull the pulsing ring towards us to cross the passage forward.

I go back and head south to where I see more rock giants. The rock giants have no patience...

...but I take care of them and move forward.

More blue slimes in the south end of the moat await!

I see another chest and west of that, another passage to the next area. However, that chest is empty too!

Before going west, I take a detour north near where I fought the slimes, and meet with more troops: a rock giant and a phantom!

I'm running out of health here...

I've cleared this area for now...

There's a lone statue here, but from the map, enemies lie dormant around the statue. 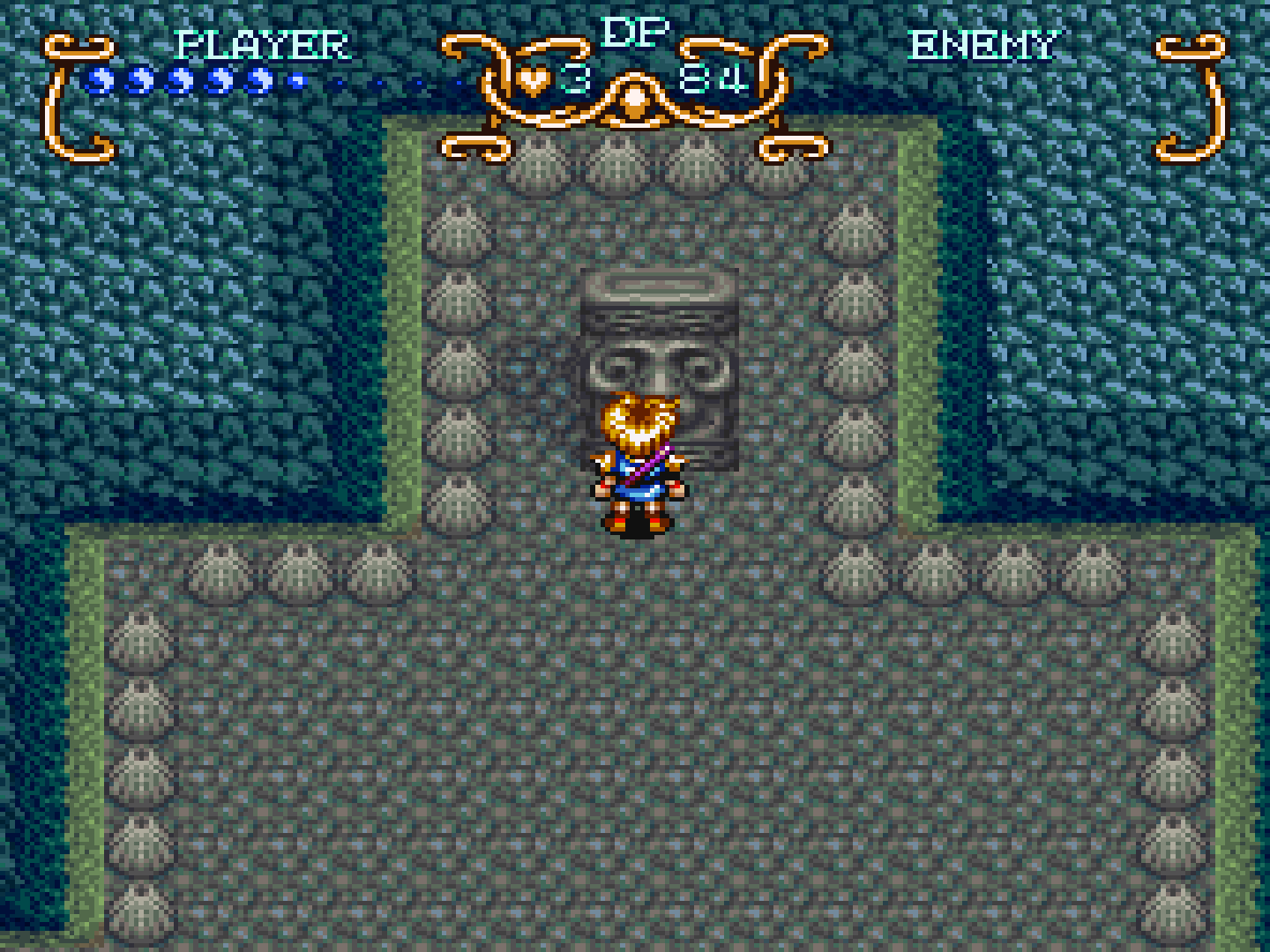 I wonder what we're supposed to do at this point...

I go back to the Room of Hope to see if I missed anything. But as I turn back, Lilly talks to Will again...

Lilly: "Will...I've been thinking...It appears as if the treasure chest is in the exact spot where the line of vision between both the statues cross. I wonder if this is supposed to mean something? Maybe not?"

Maybe those pulsing rings we saw might be useful?

Going back to the second area, I get caught by the set of spikes!

With careful maneuvering, I place the pulsing rings near the statues' line of sight! 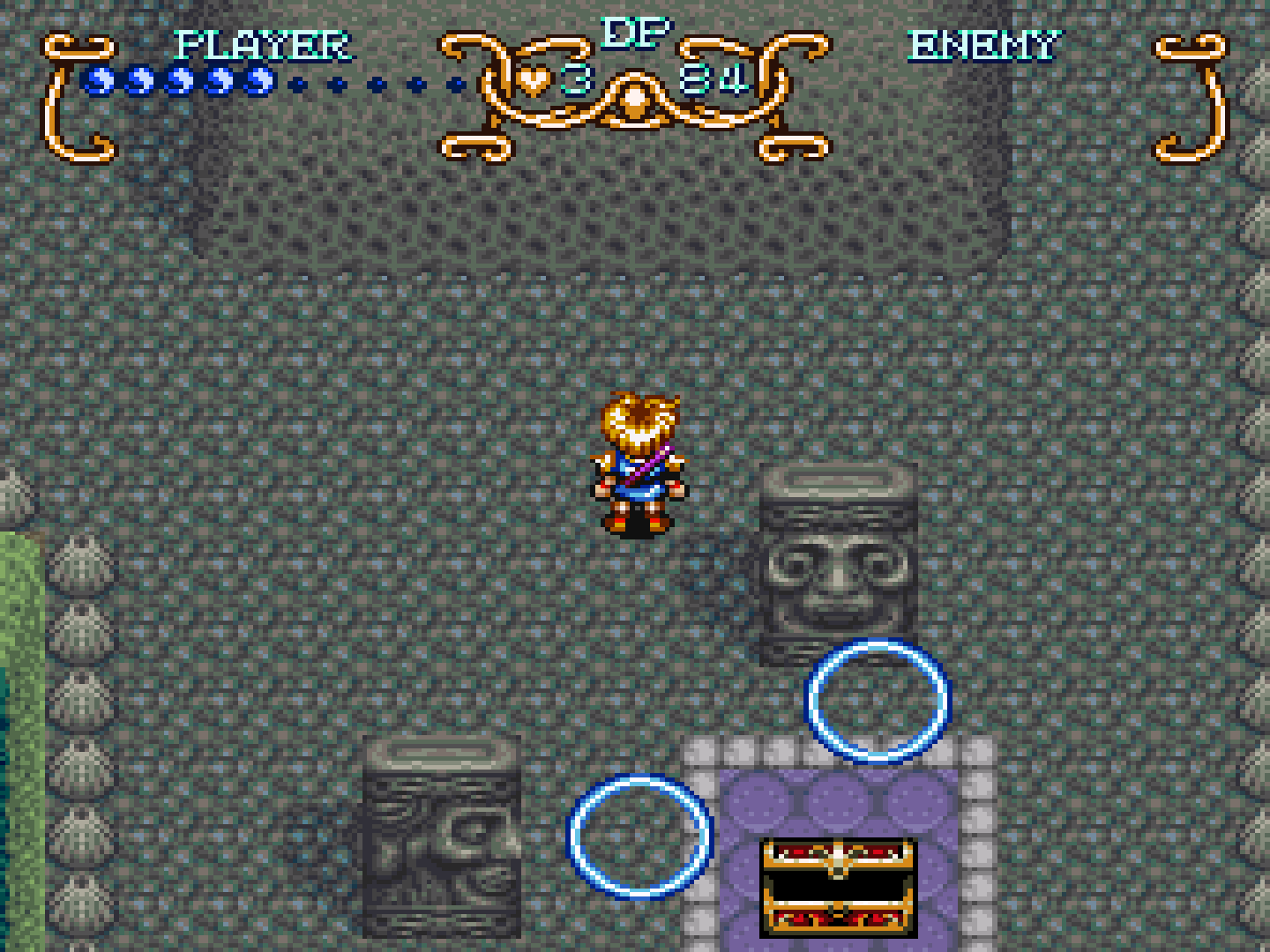 Let's see if I could put them in the chests...No chance.

After reading Lilly's message from earlier, we go back to the empty courtyard with the staring statue heads, and insert Will in their intersecting gaze. 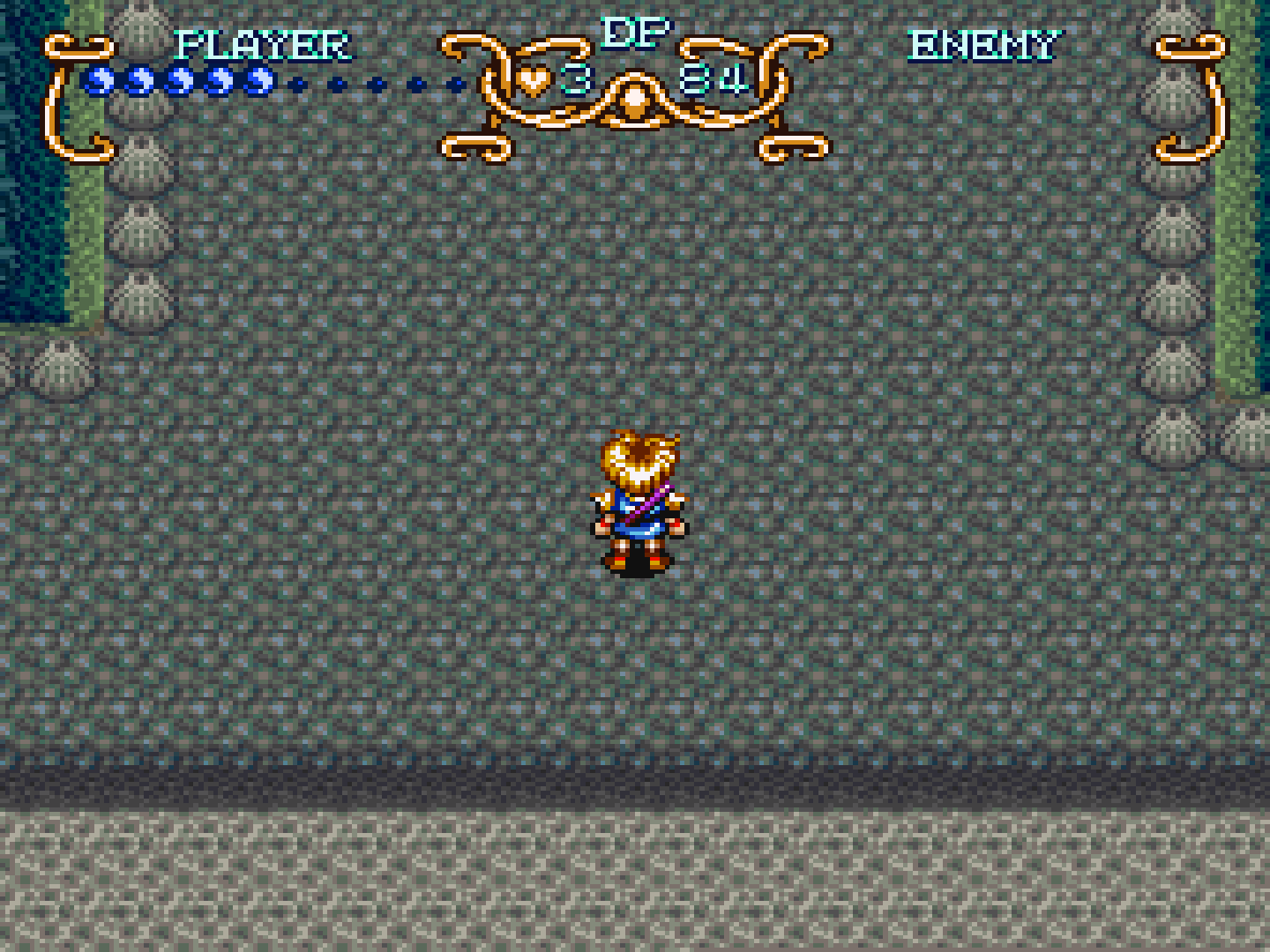 After pressing A at that spot, I find the Statue of Hope! 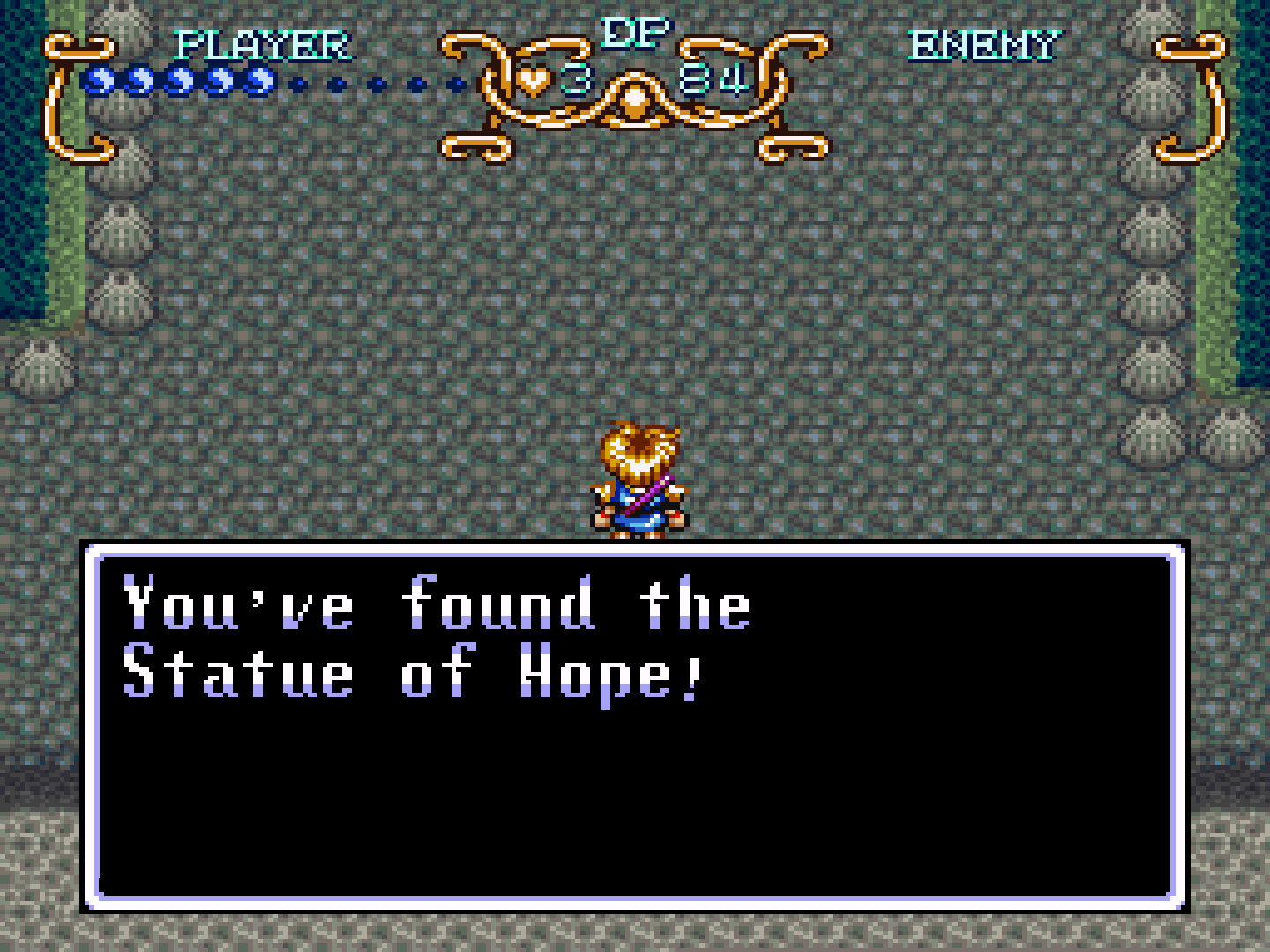 There is. We go back to that room.

We place the Statue of Hope at the brazier. Something happens... 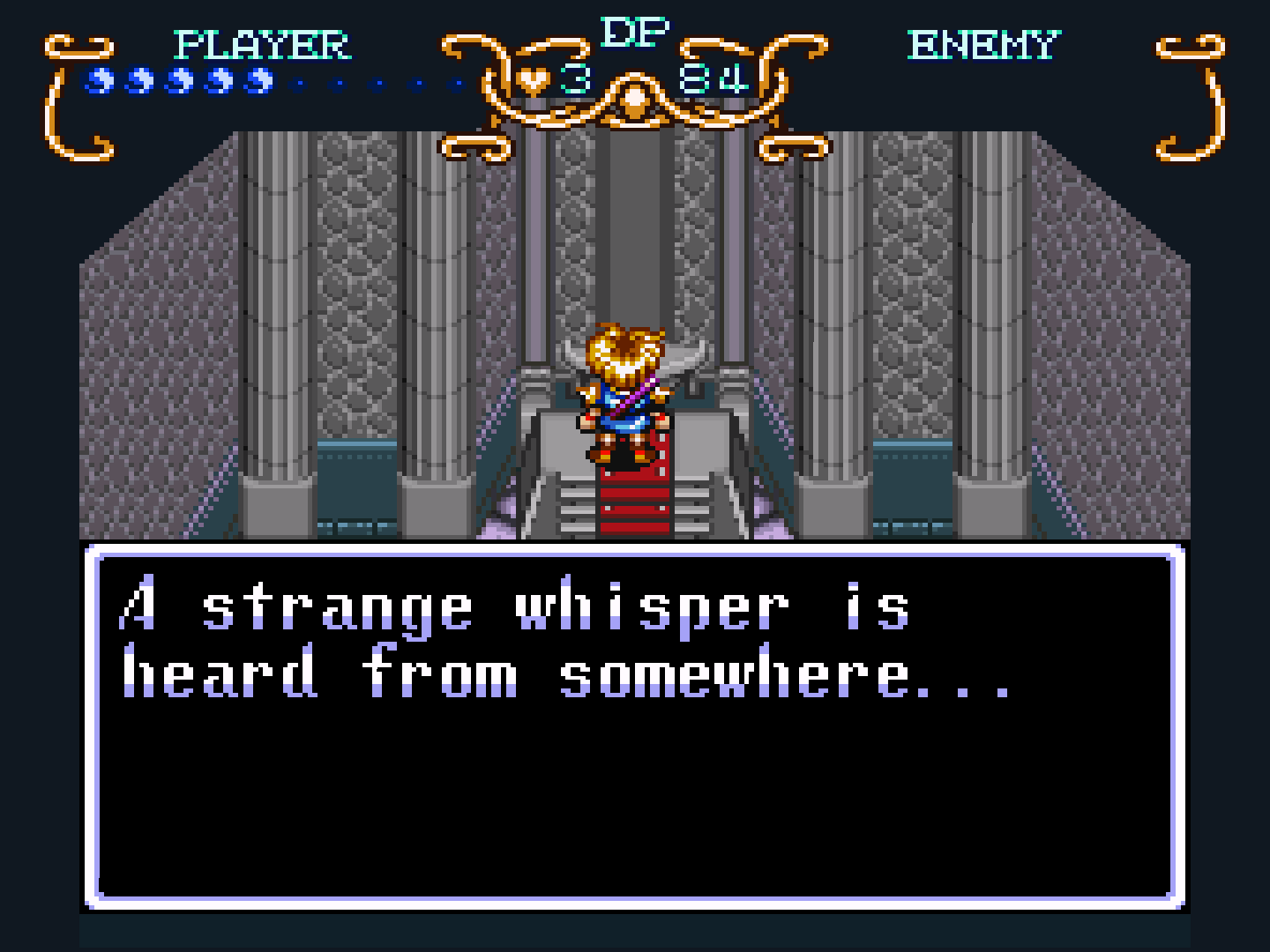 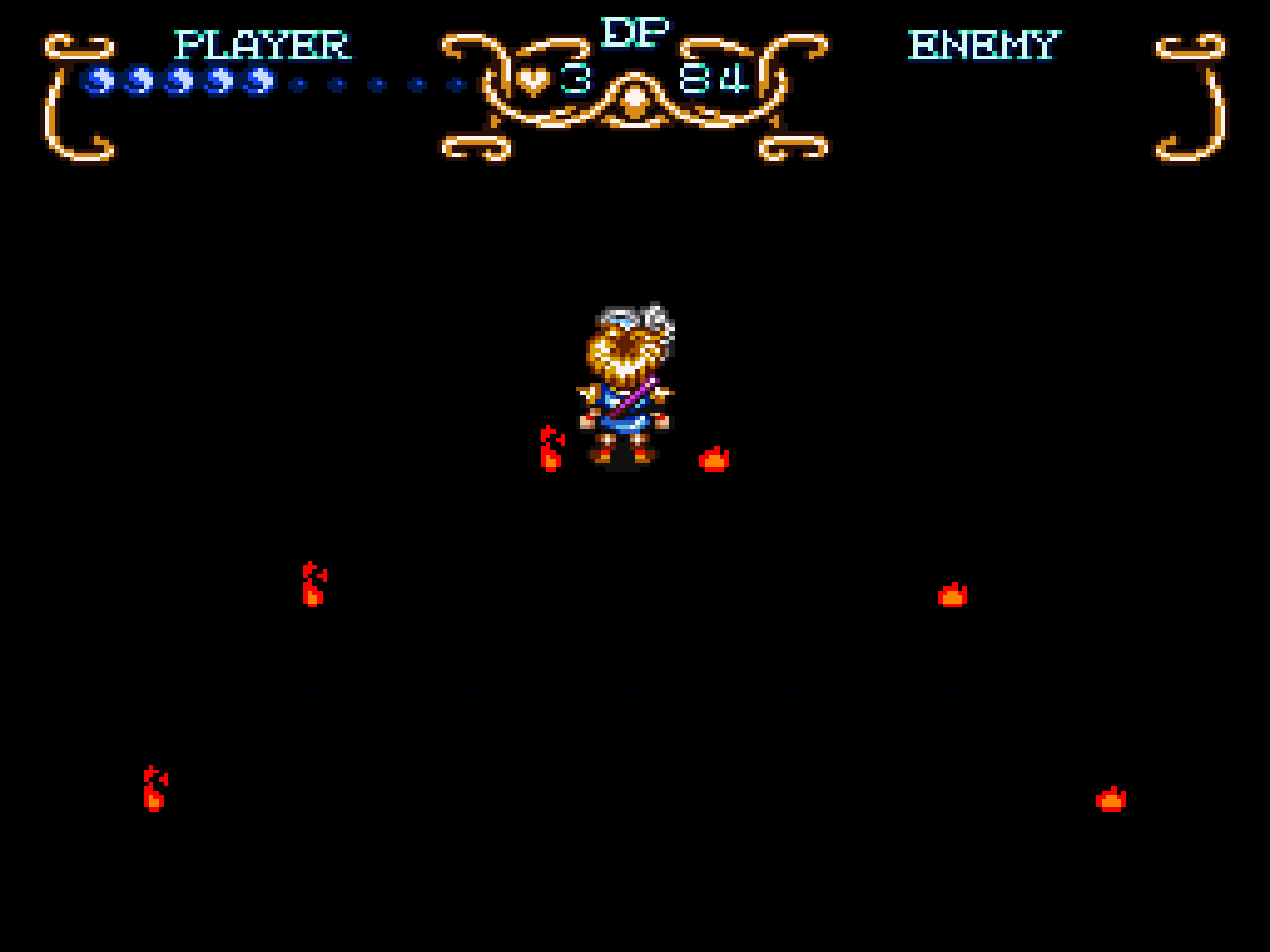 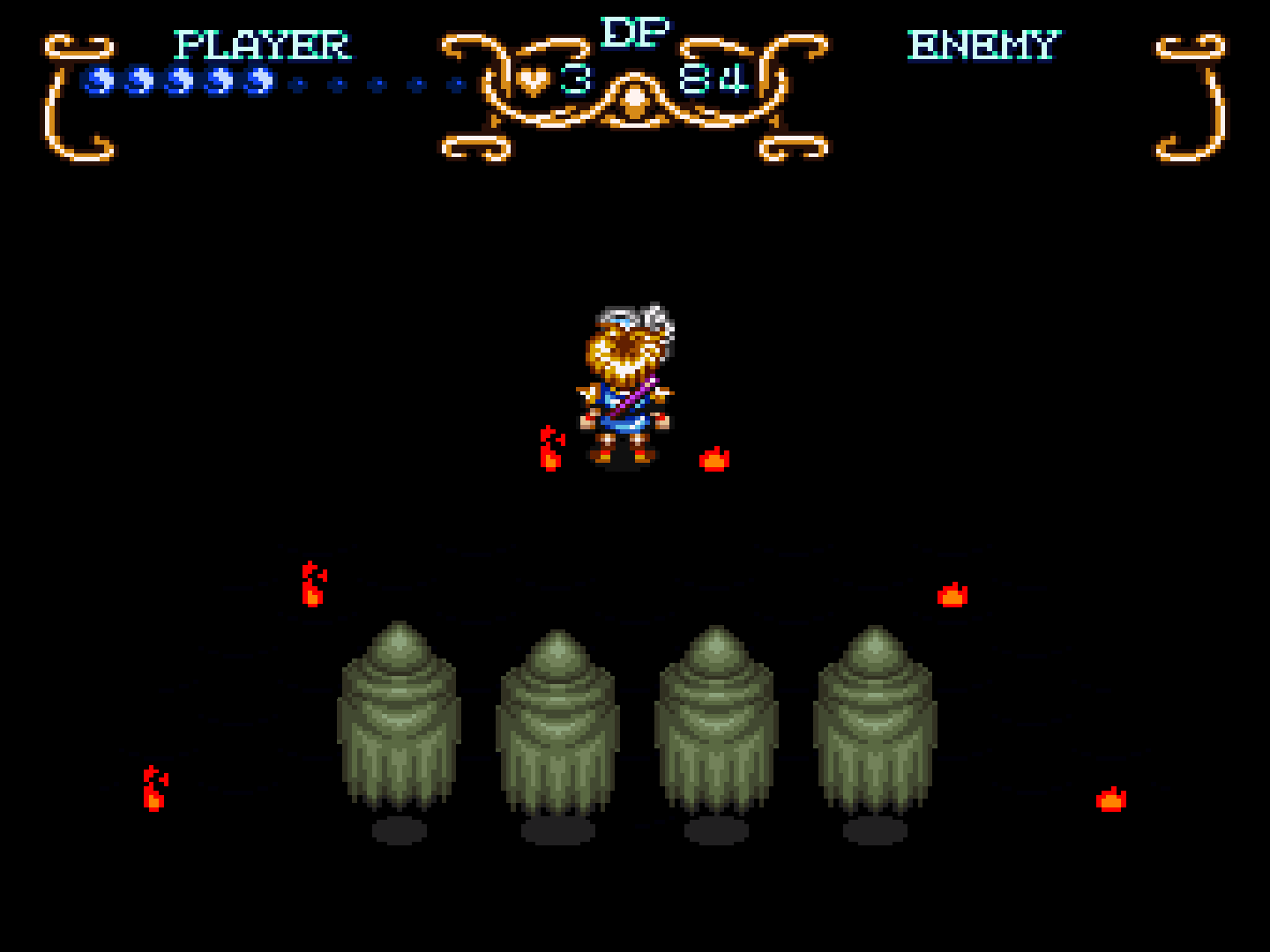 As we leave the Room of Hope, Lilly notices something! 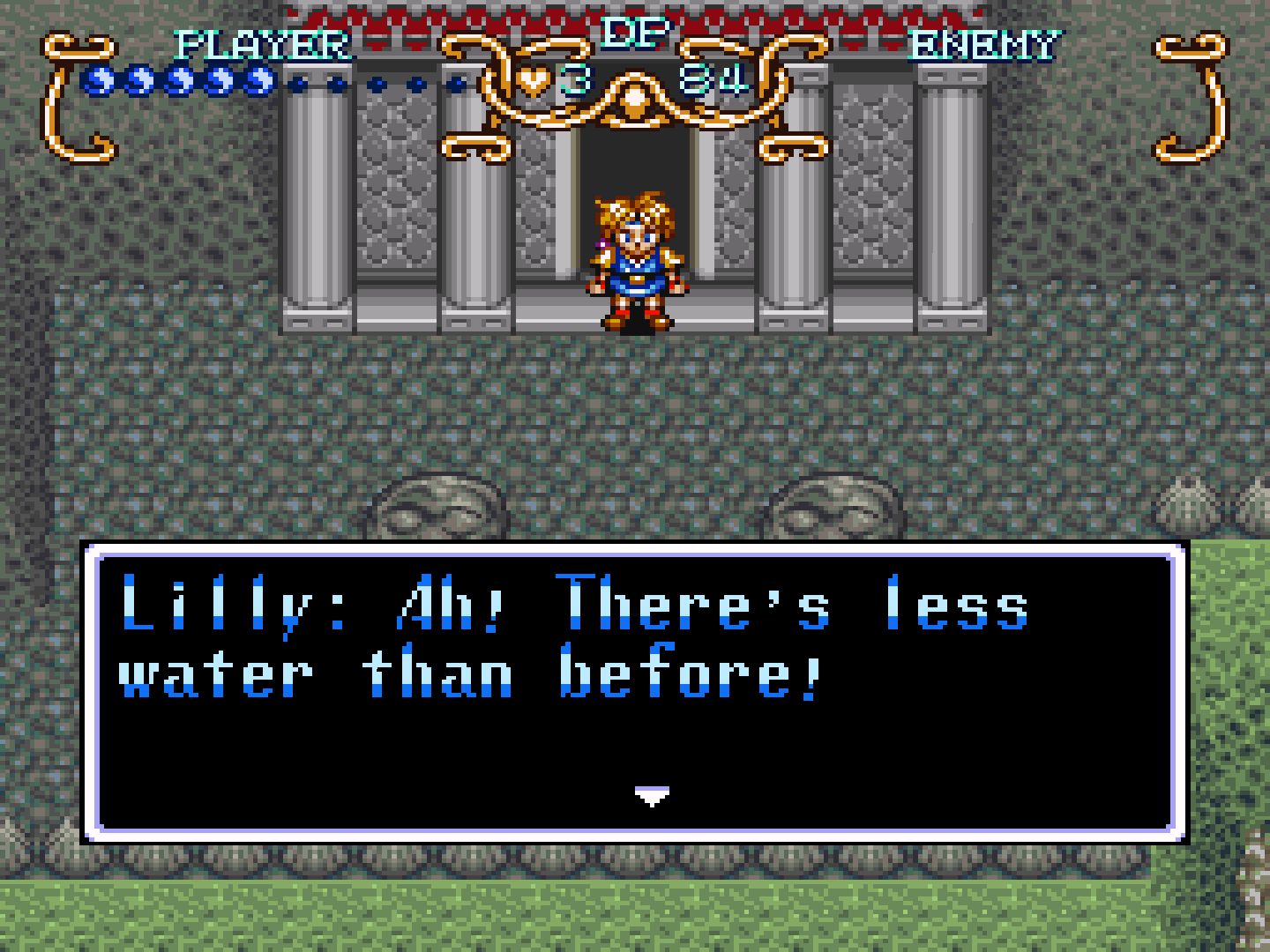 I go back to the first area, and look for the Dark Space portal at the empty moat!

There's still some areas that are flooded here, especially a spot where a chest lies...

North of the flooded chest is another Room of Hope to drain that area. But we need to find another statue.

Back to the second area and down to the moat, where I face off against more foes!

The phantoms are still as tricky. Plus, I'm running low on health again! 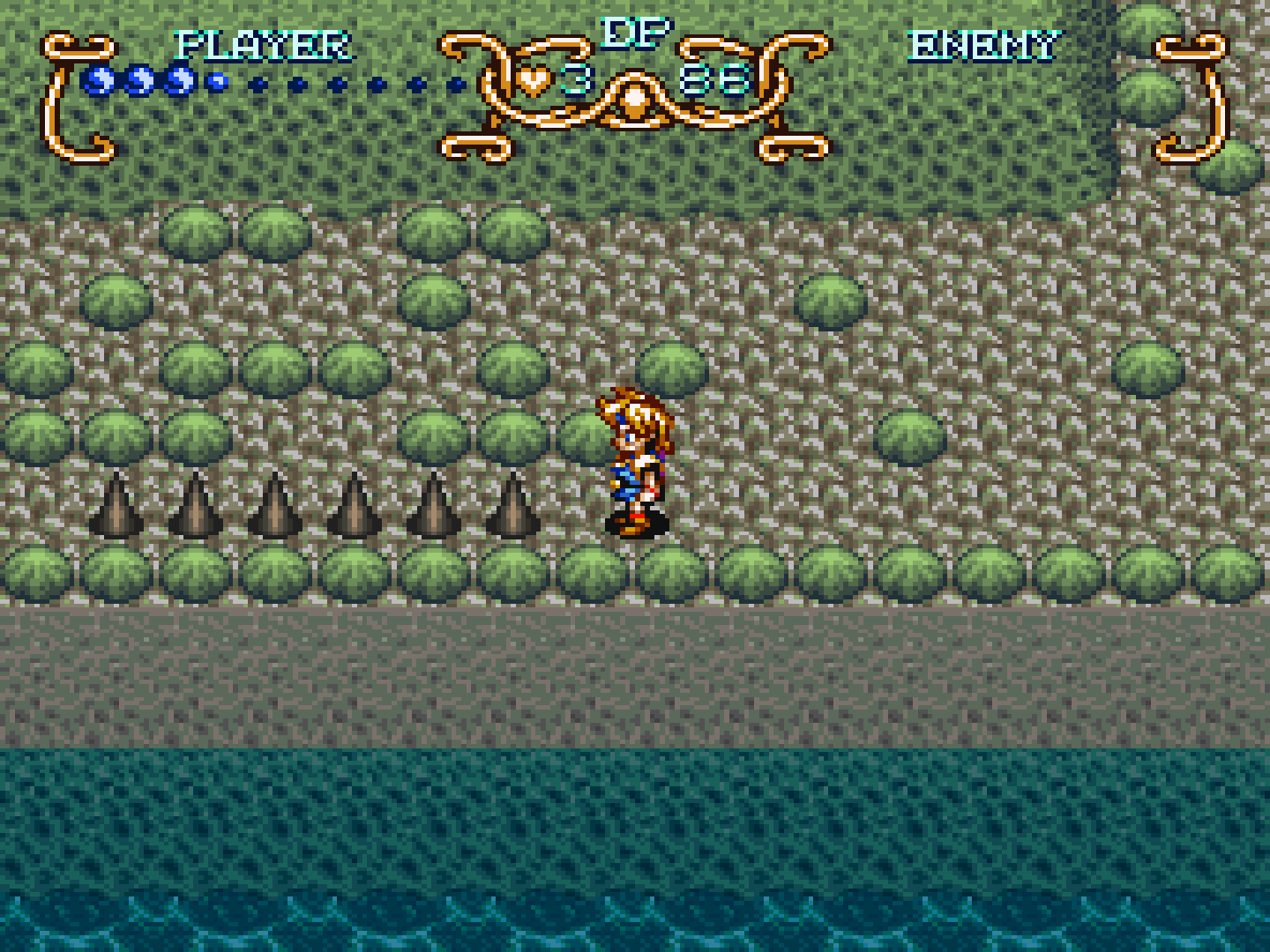 You must be joking, game...

Lucky that was an easy crossing!

And we reach a Dark Space portal! 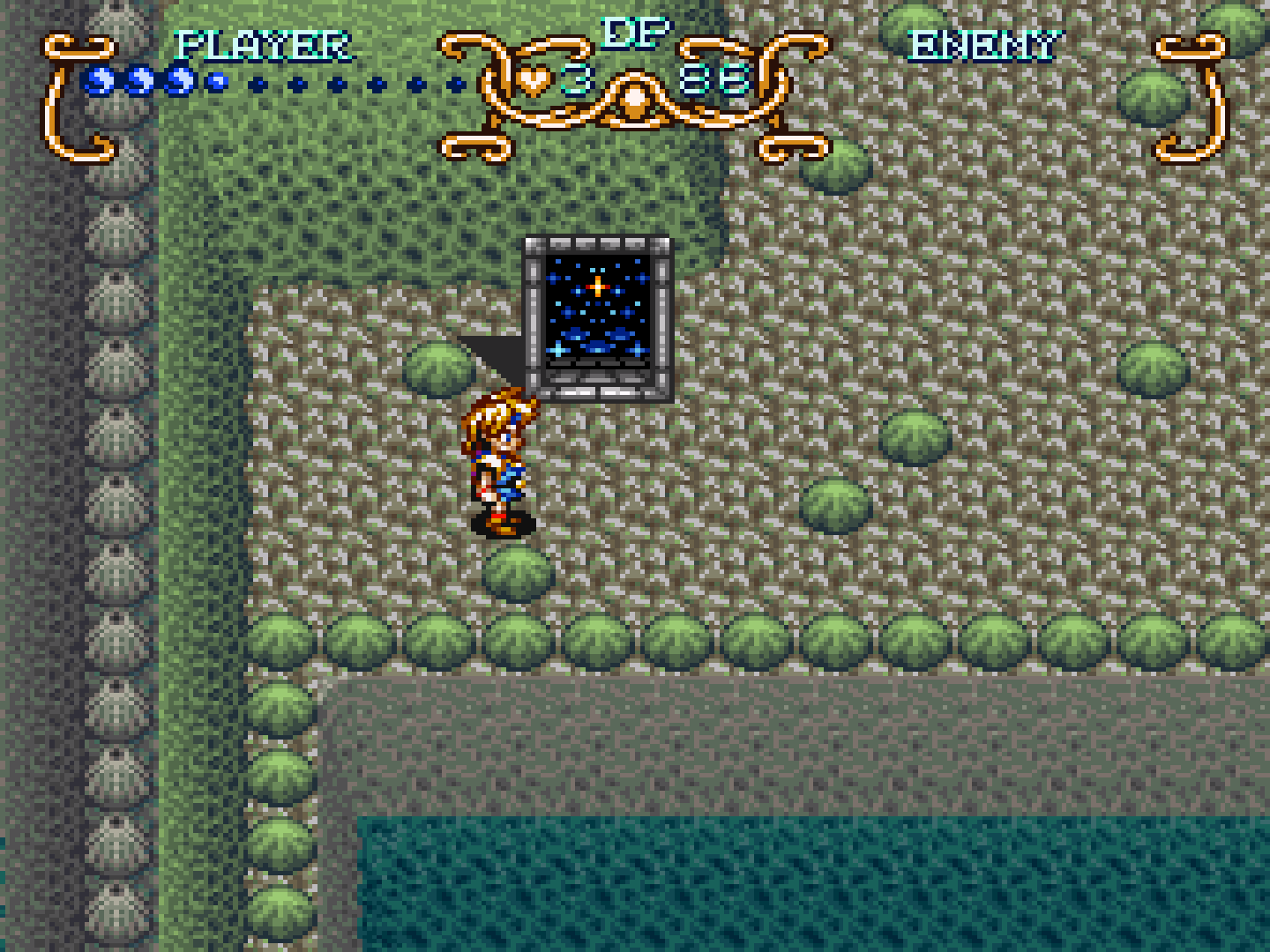 Gaia gives us more advice, or, the history of Mu.

Gaia: "When you started this journey, Mu began to rise from the sea. Sea water still covers land in many places on the continent. When the water is gone you will discover the location of Rama, King of Mu."

So the Sun God the phantoms were referring to was the King of this land, huh?