After unlocking the door to the tunnel, Lilly speaks to us. 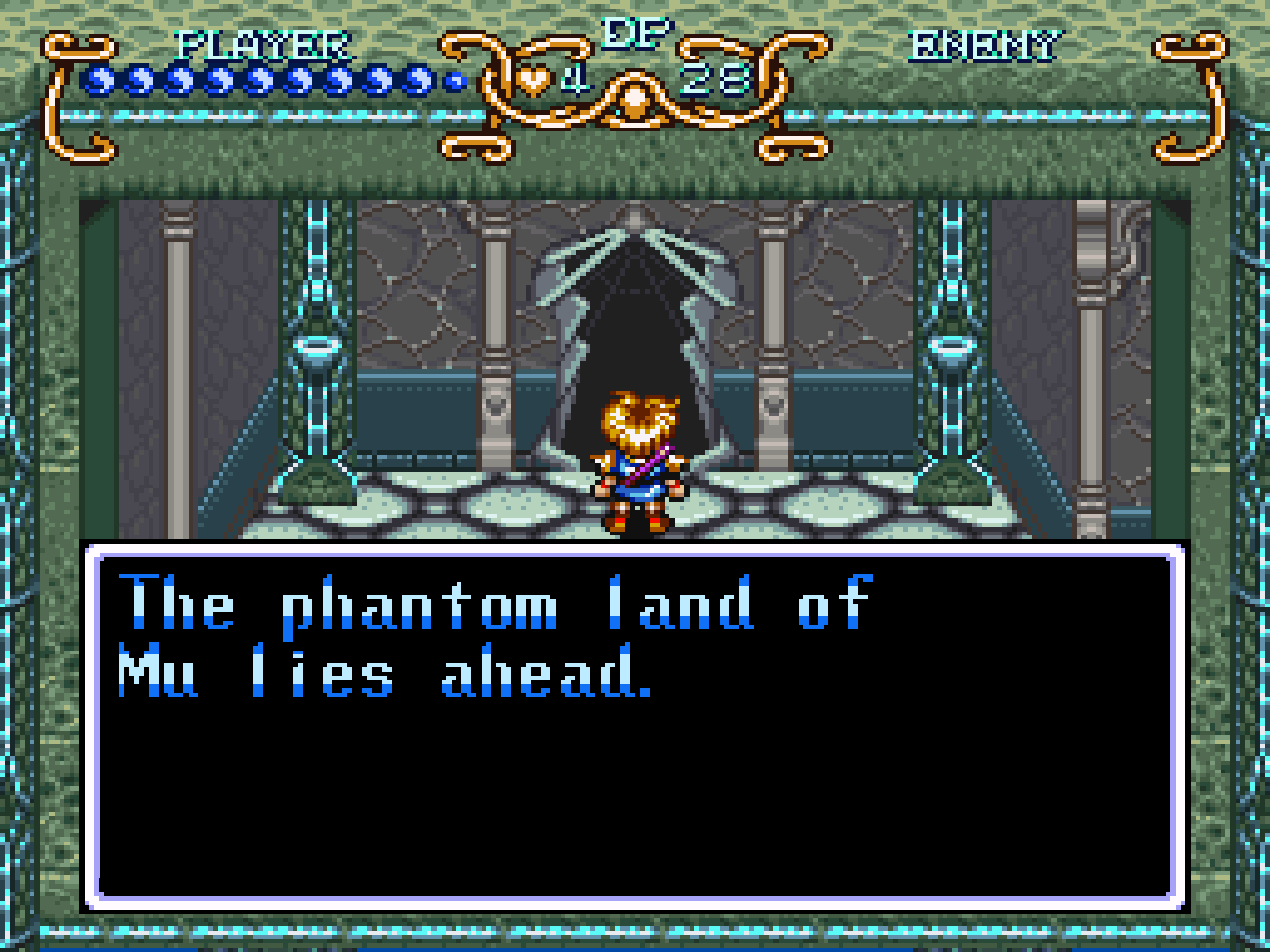 I'm thinking by the way she used the word "phantom" to describe Mu, she's probably warning us...

We go inside, where the interior of the tunnel's different. For some reason, the color of the flooring reminds me of the Endless Staircase anteroom in Super Mario 64... 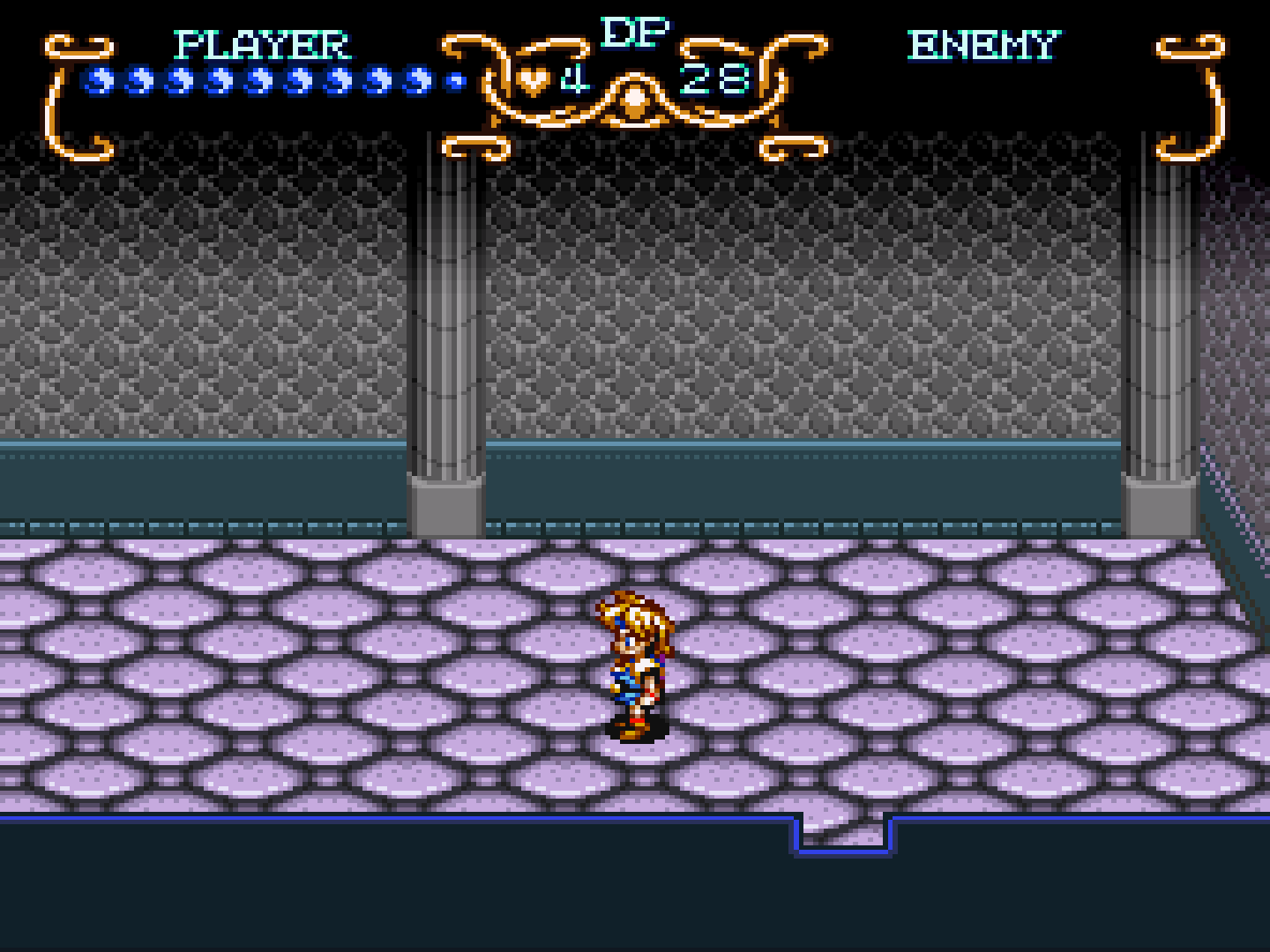 In the middle of the passage Lilly gives us more warnings...or not, as she's wondering whether this directly leads to Mu.

After a short walk, there's an entrance... 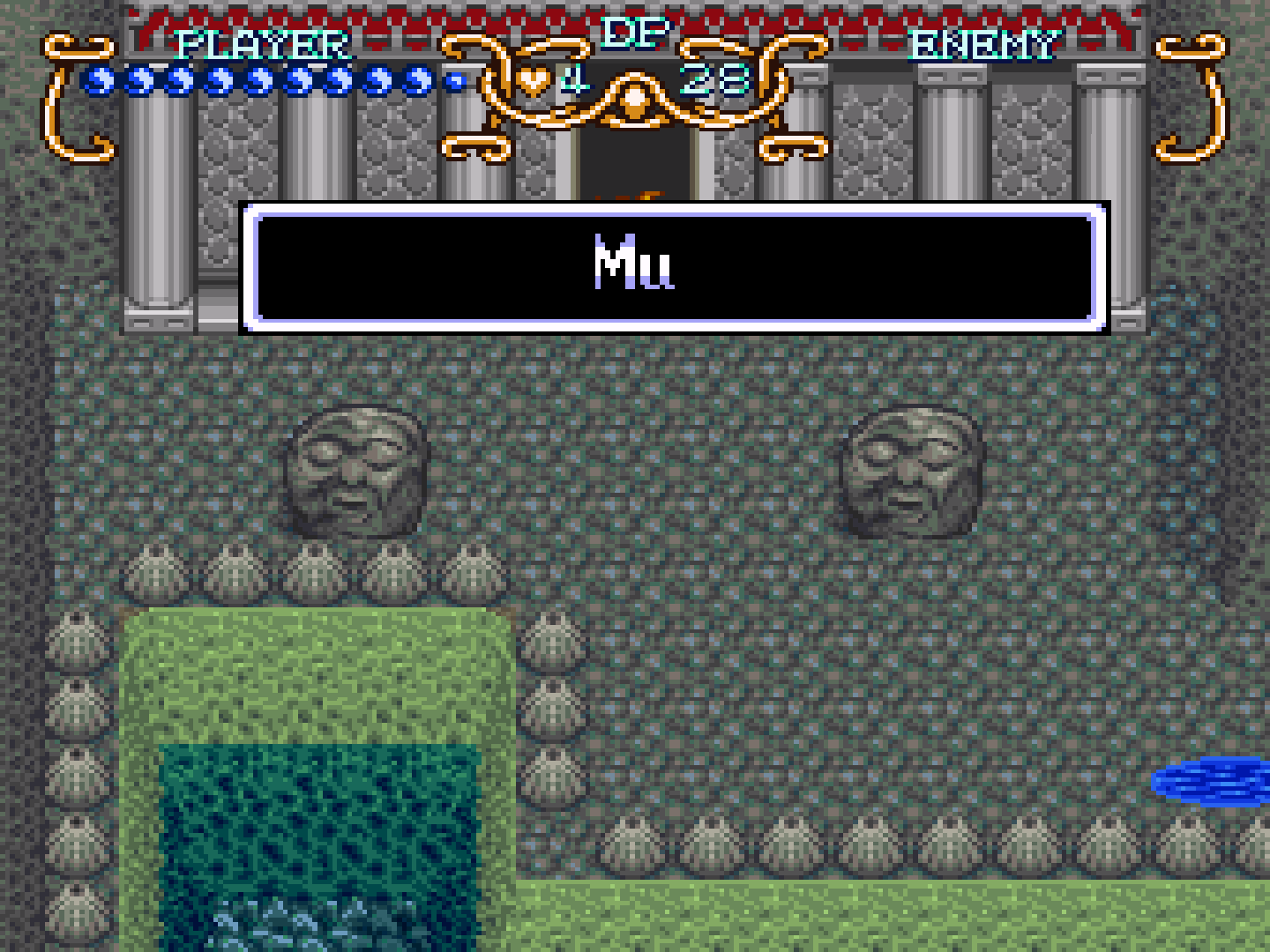 Here's the music for the land of Mu.

Will: "Lilly and I set foot on Mu. They will probably welcome us after waking from a sleep of thousands of years..."

It seems 19 other enemies are wanting to welcome us too.

A new enemy, a rock colossus, or an iron giant, awakens! 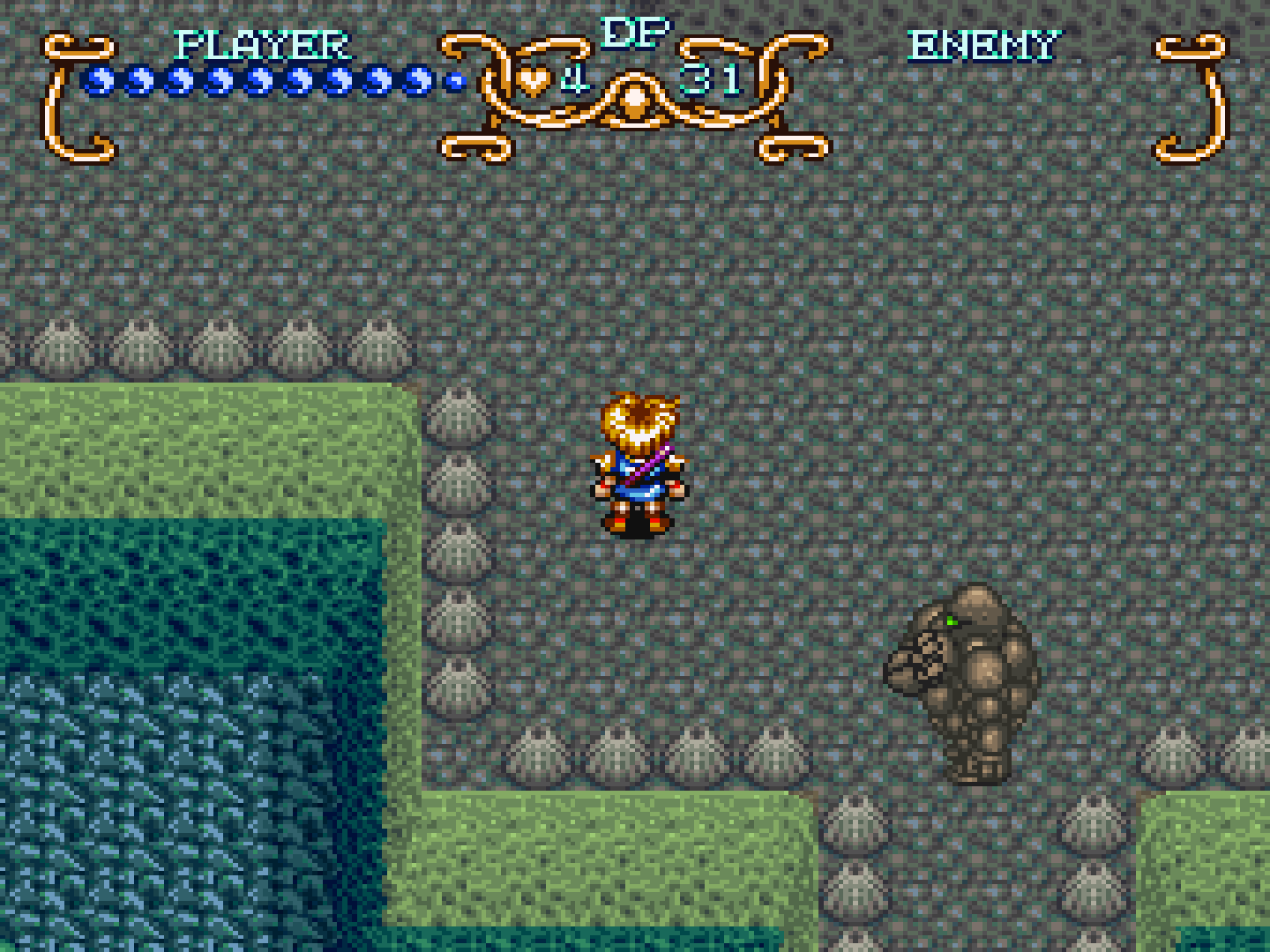 His greeting is to throw rocks at us!

This rock giant has lots of health!

Before his health is gone, he retreats into his resting self! After waking up, I take care of the giant.

I cross to the lower parts of the land. The passage down the slope, however, is flooded!

We need to find a way to drain the water...

After taking care of another rock giant, the passage eastwards opens! 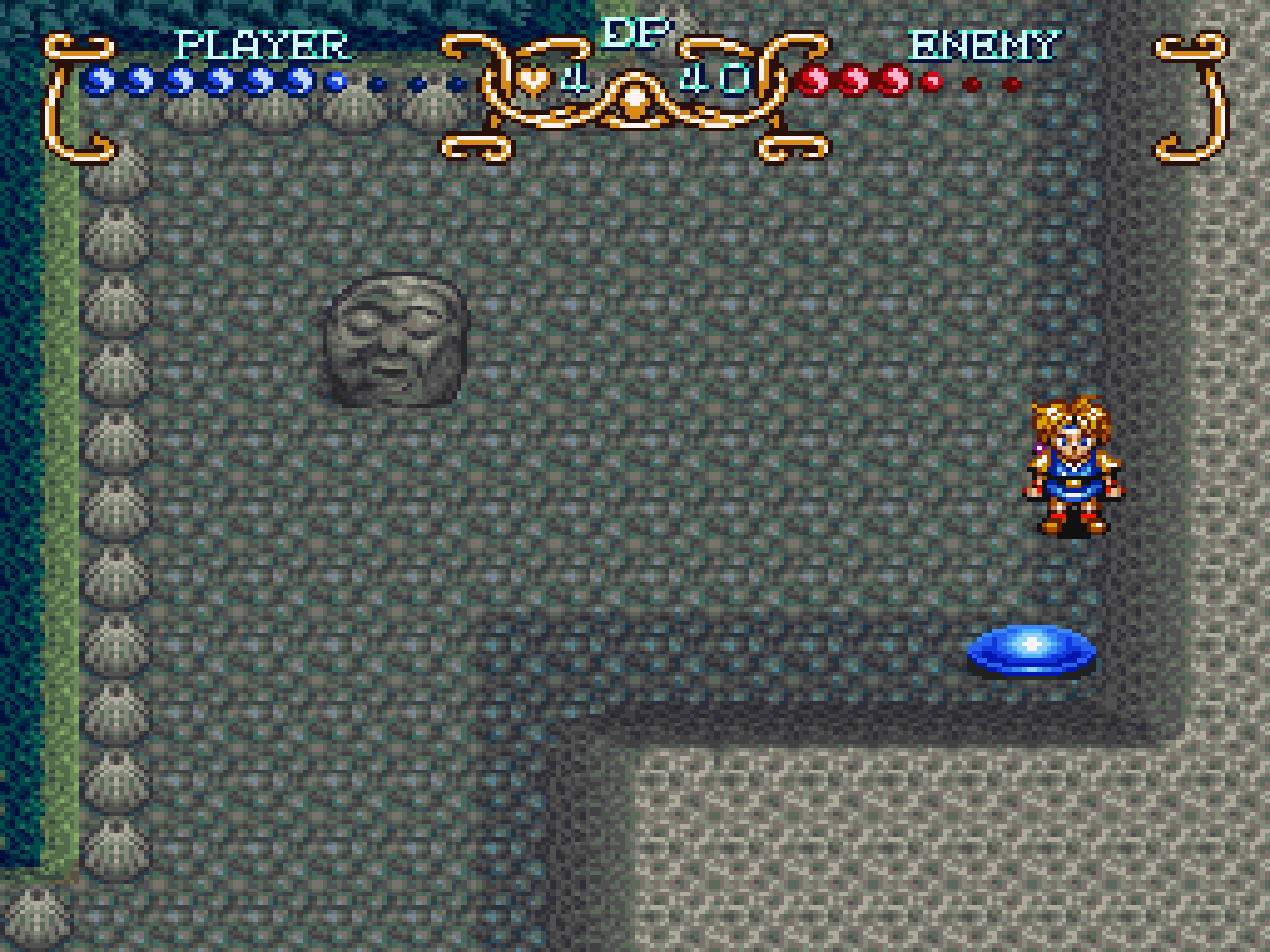 Up ahead, two rock giants bar our way. With careful dodging, we take care of them!

From the map, there's six enemies left in this area. I'm guessing after we drain the water here, we can probably clear the place! 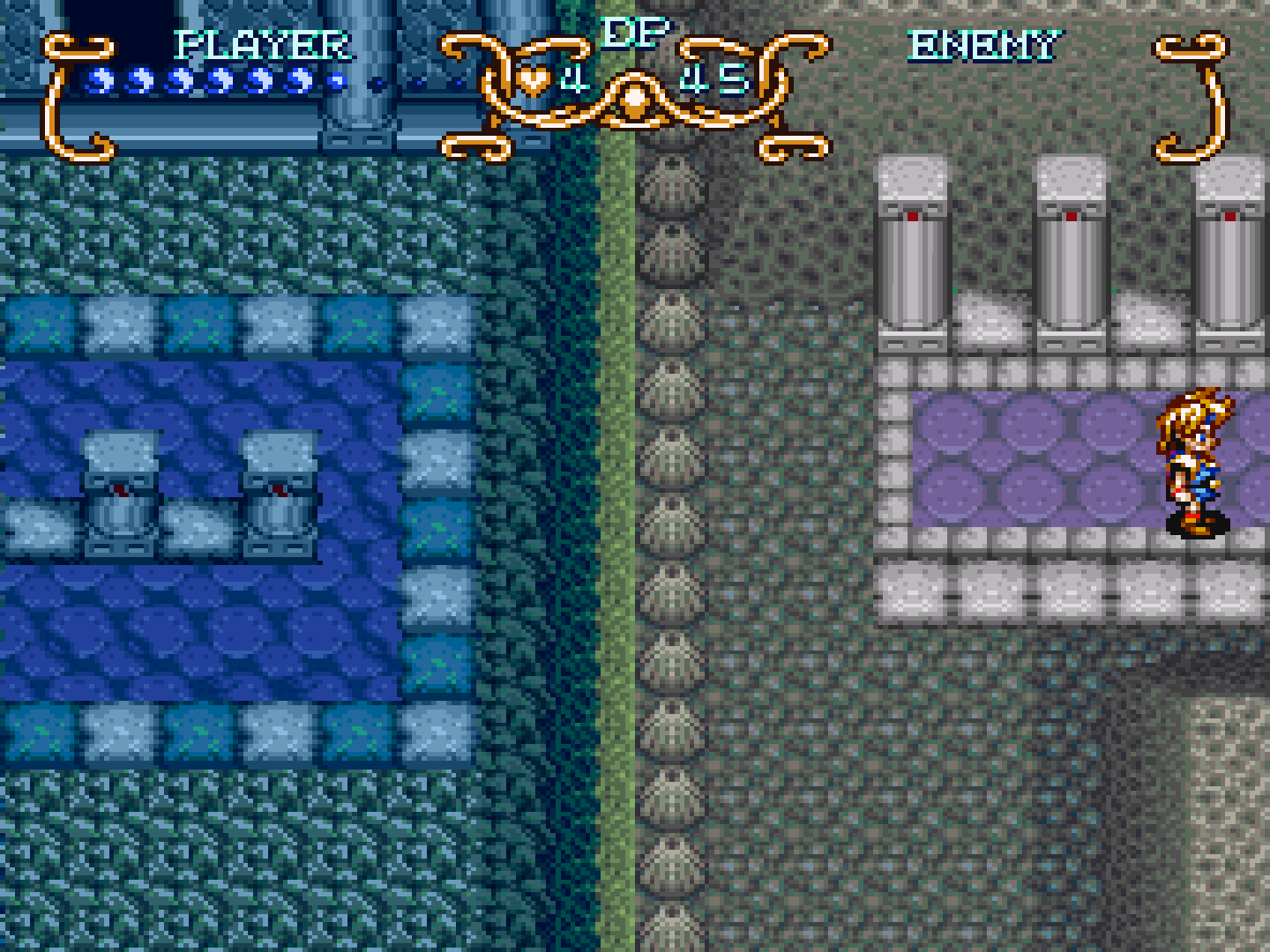 In the east, there's 26 enemies in this area!

As I walk forward, a phantom suddenly appears! They're getting ready to cast their magic. 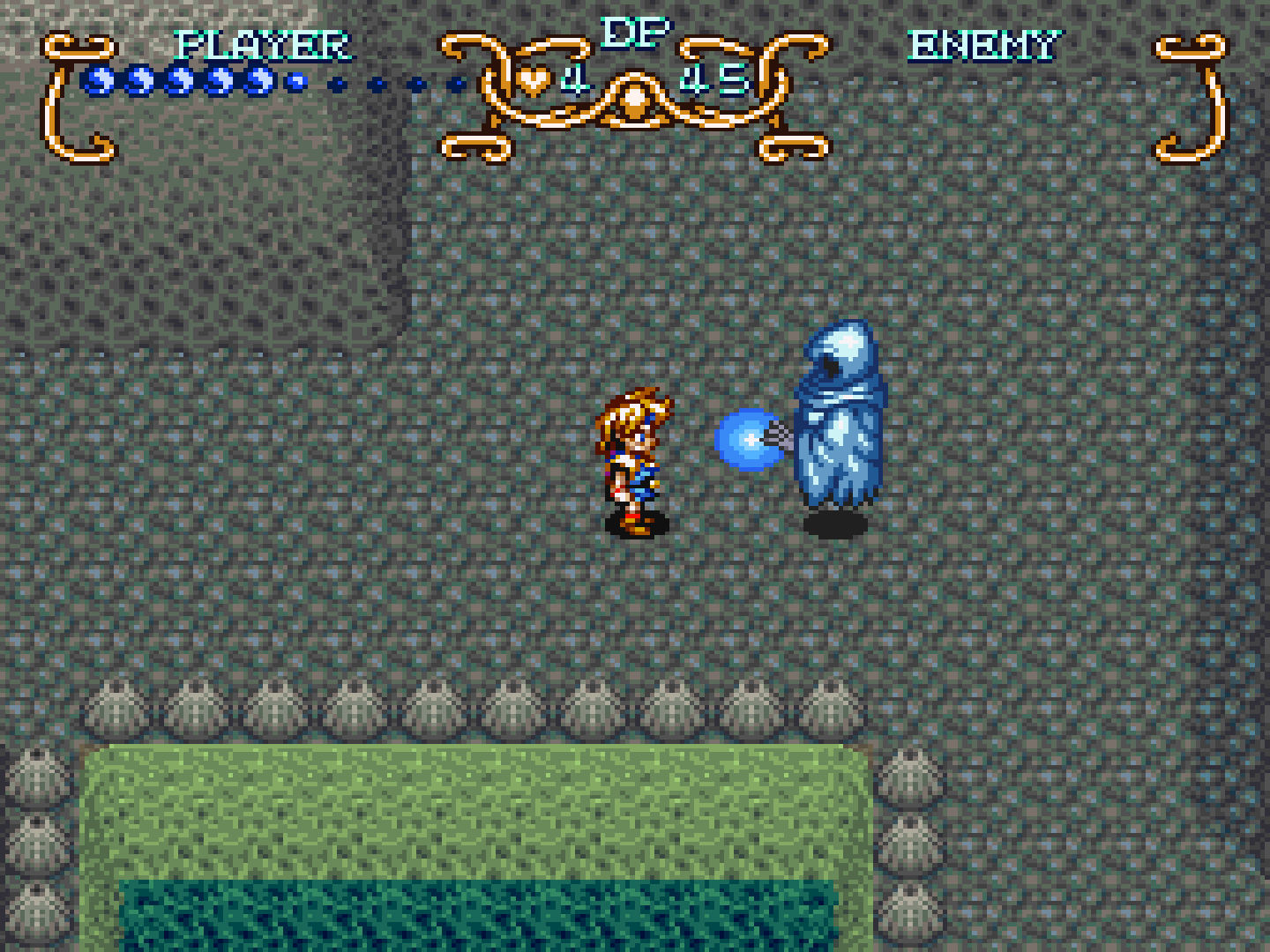 And their magic hits Will square in the face!

It becomes a game of chase with the phantom... 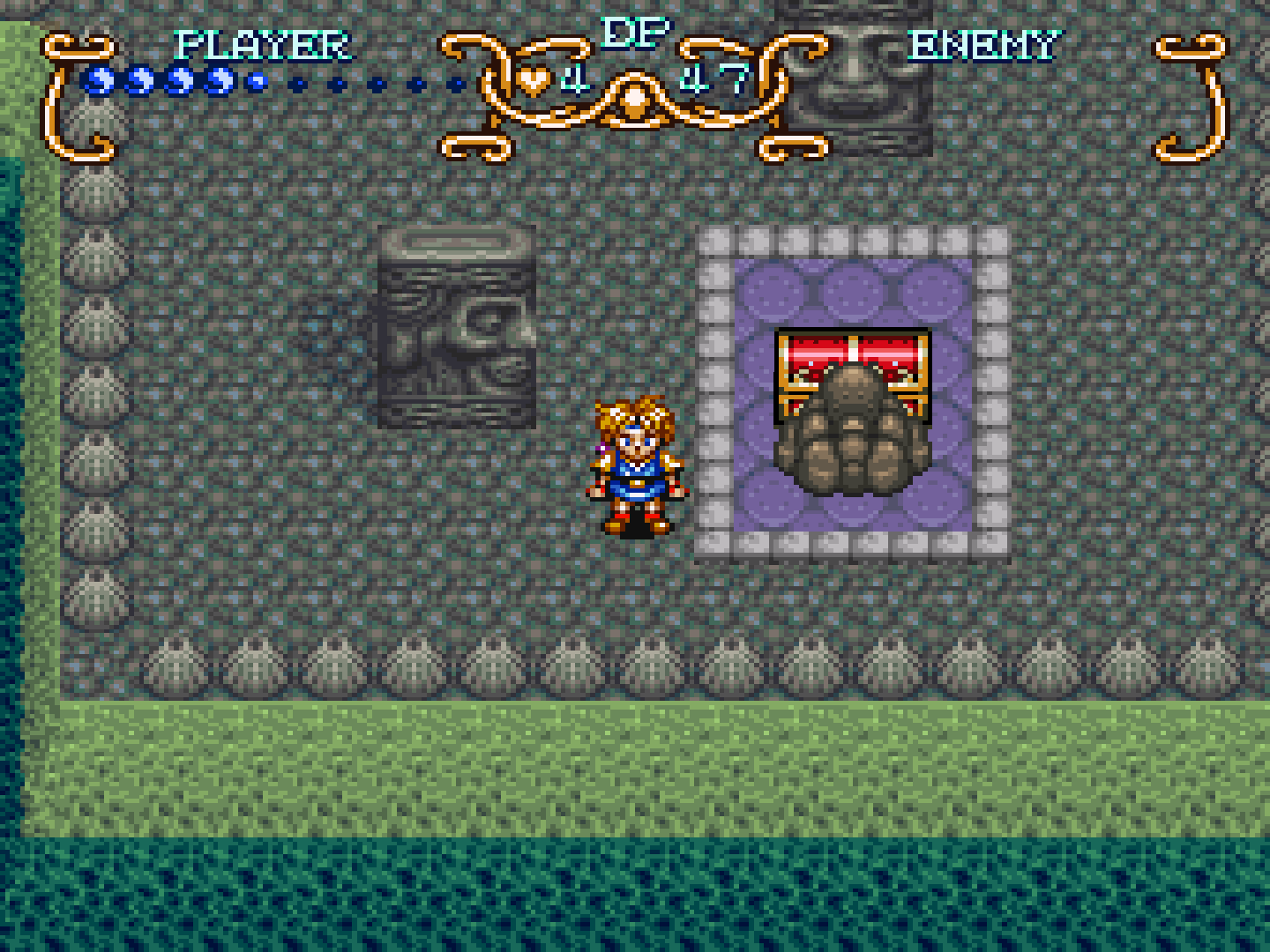 The giant's only invincible when he wakes up, but when angered, the giant spreads rocks in his line-of-sight!

Plus, this giant's faster at throwing rocks compared to his other cousins in the previous area now.

But it was all for nothing, as we get nothing in the chest!

Up northeast, there's a pulsing ring of blue near some blue slimes... 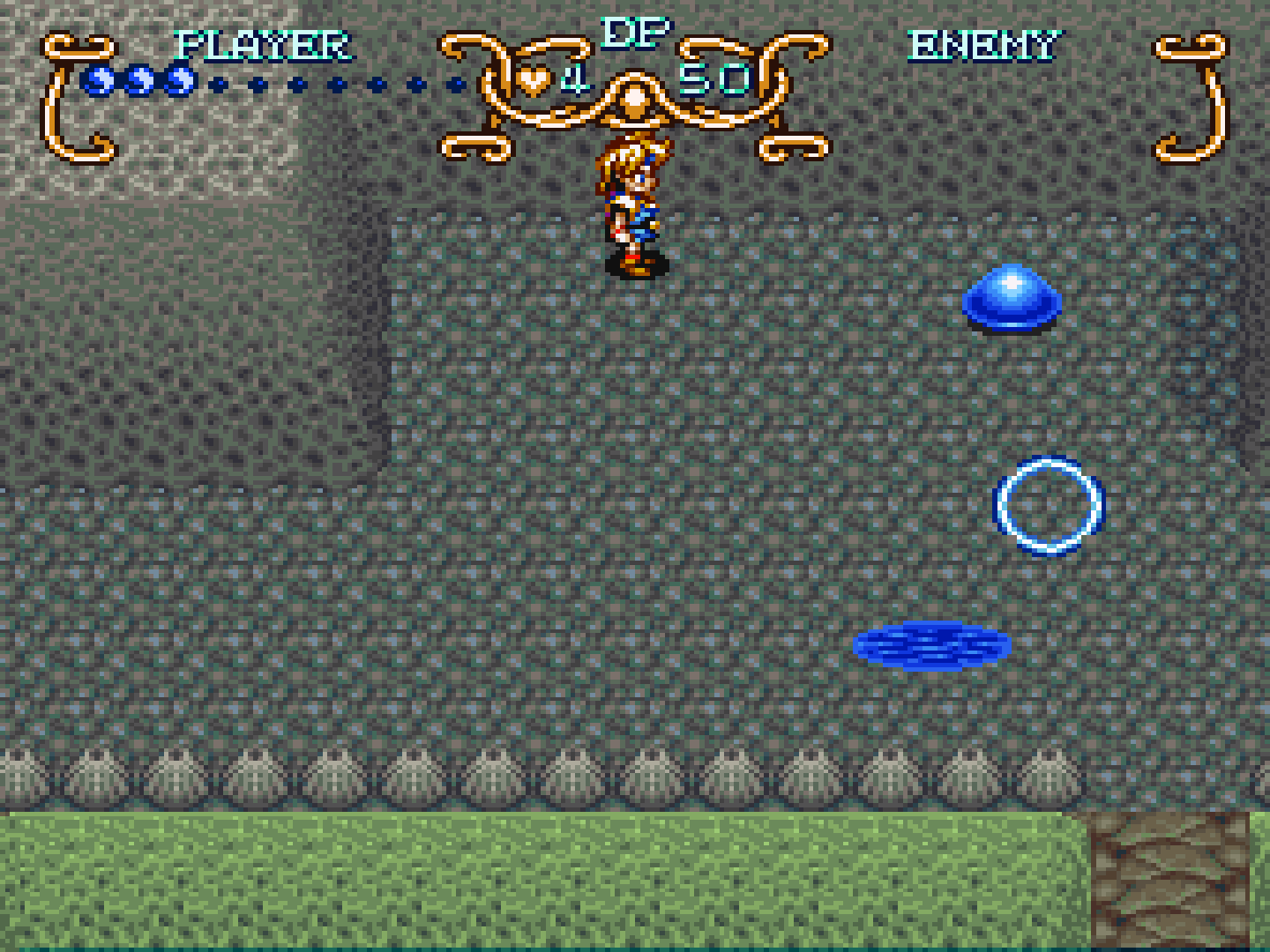 And another phantom comes in!

Like the last one we faced, it takes patience to take care of him...

Touching the pulsing ring, it pushes Will super-fast! But I can move it by hitting the ring with the flute! If I have Will perform his dash on it...

Nothing happens, except Will gets pushed back!

I also learn that while twirling the flute, the rings can be drawn to Will!

Farther southwards, the gray drops make their return as I cross a maze of rocks...

But Will gets KO'd and kicked back to the start of the area after getting hit by more rock giants' projectiles!

I decide to move the blue rings to the flooded area...no good either.

Back to taking care of the remaining enemies... 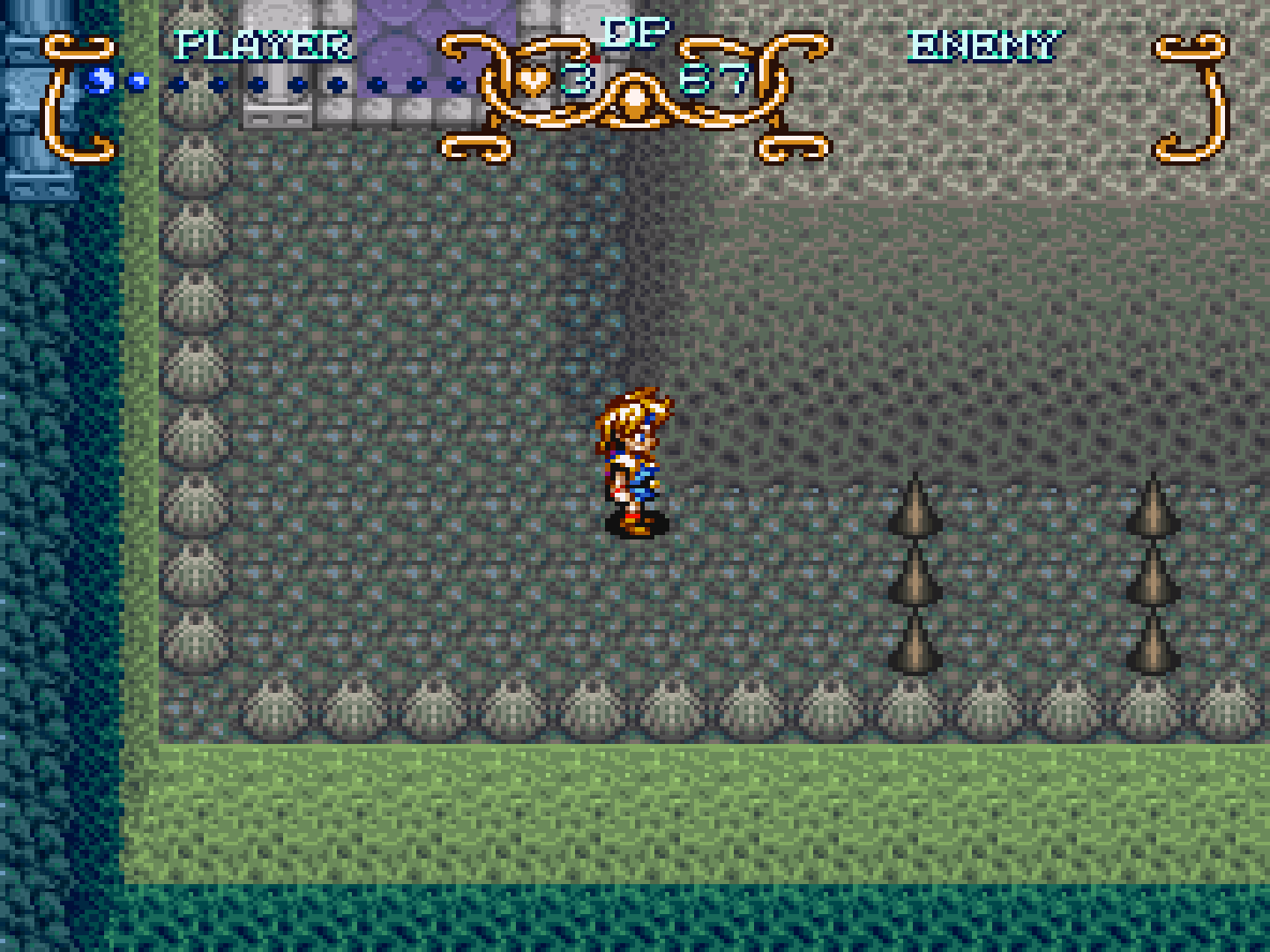 Knowing we're spent, I have Will dash back to the Seaside Palace and save once more.

What do those rings do? Or rather, what are they for?