Okay, it seems the map and my save file spoiled me for our current location: we're at the Seaside Palace, near the continent of Mu! 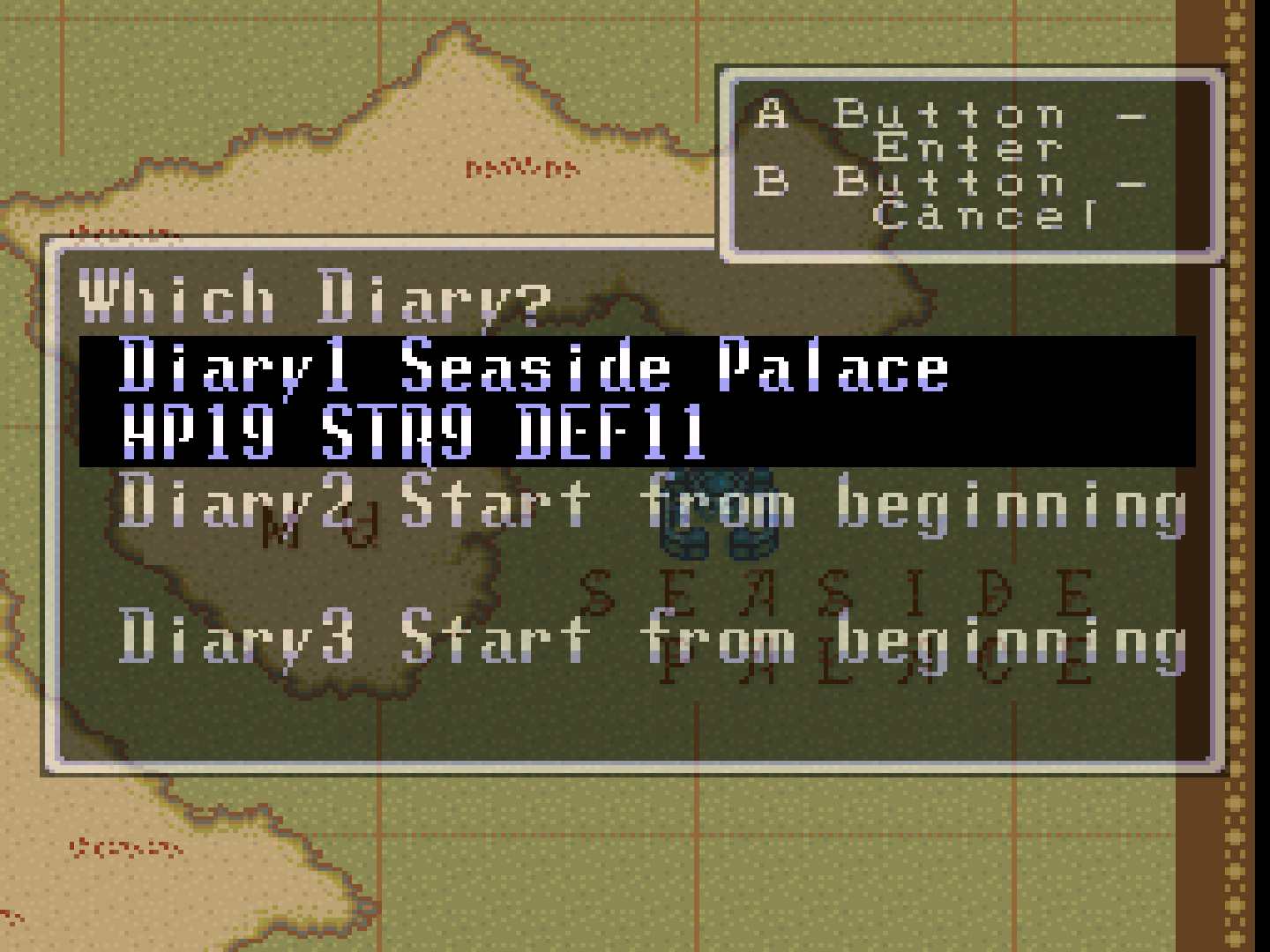 As soon as we venture east, Will notices something! 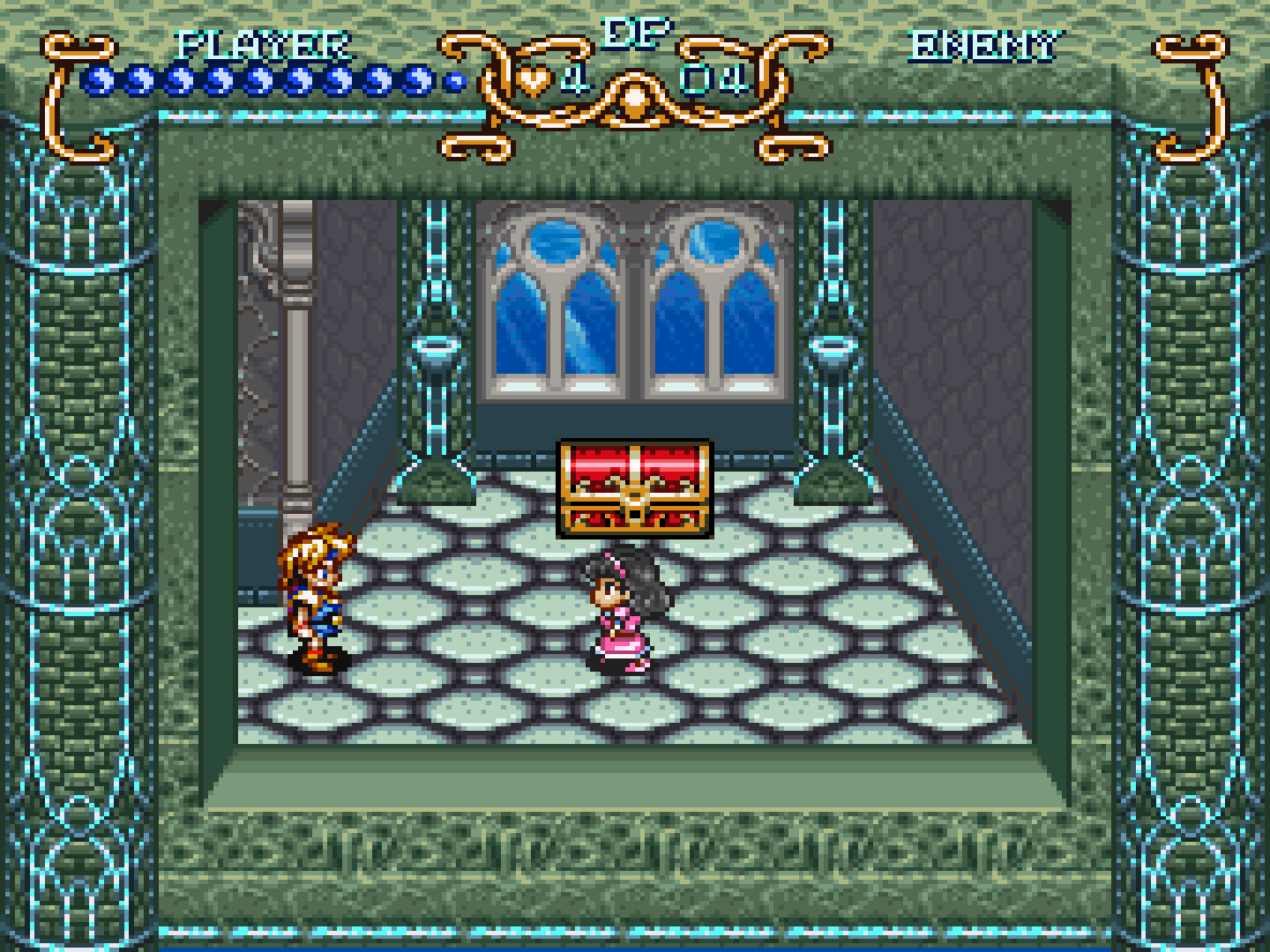 Near a chest, we see an apparition of Kara! What's going on here? Is she...or is Will...

I check the contents of the chest: a Red Jewel, which I send off to the Jeweler Gem immediately!

Like all apparitions, I go through Kara! She's asking where Will is... 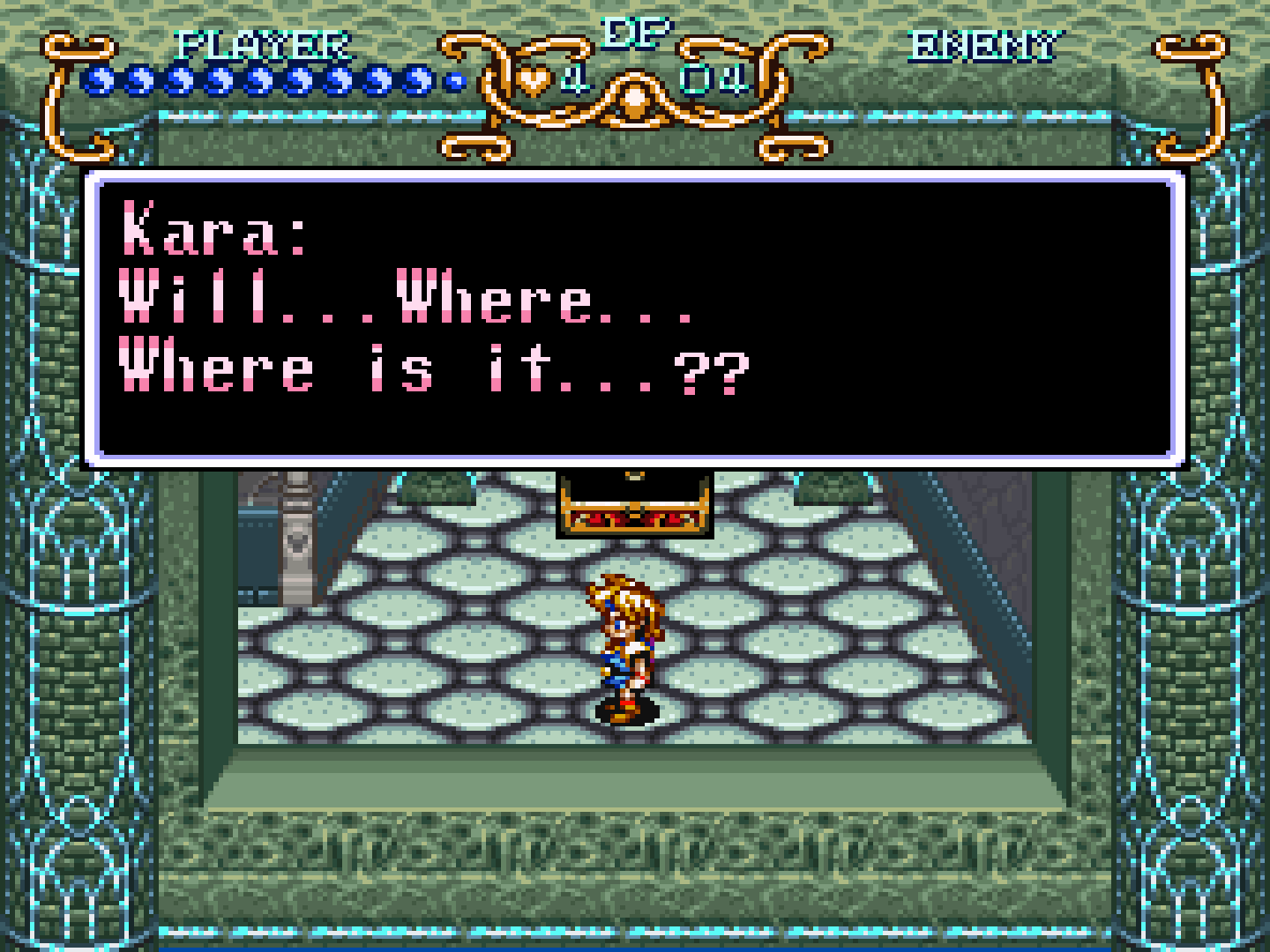 I go back to where Will woke up. The door's still locked!

Heading down the stairs, down two floors below! 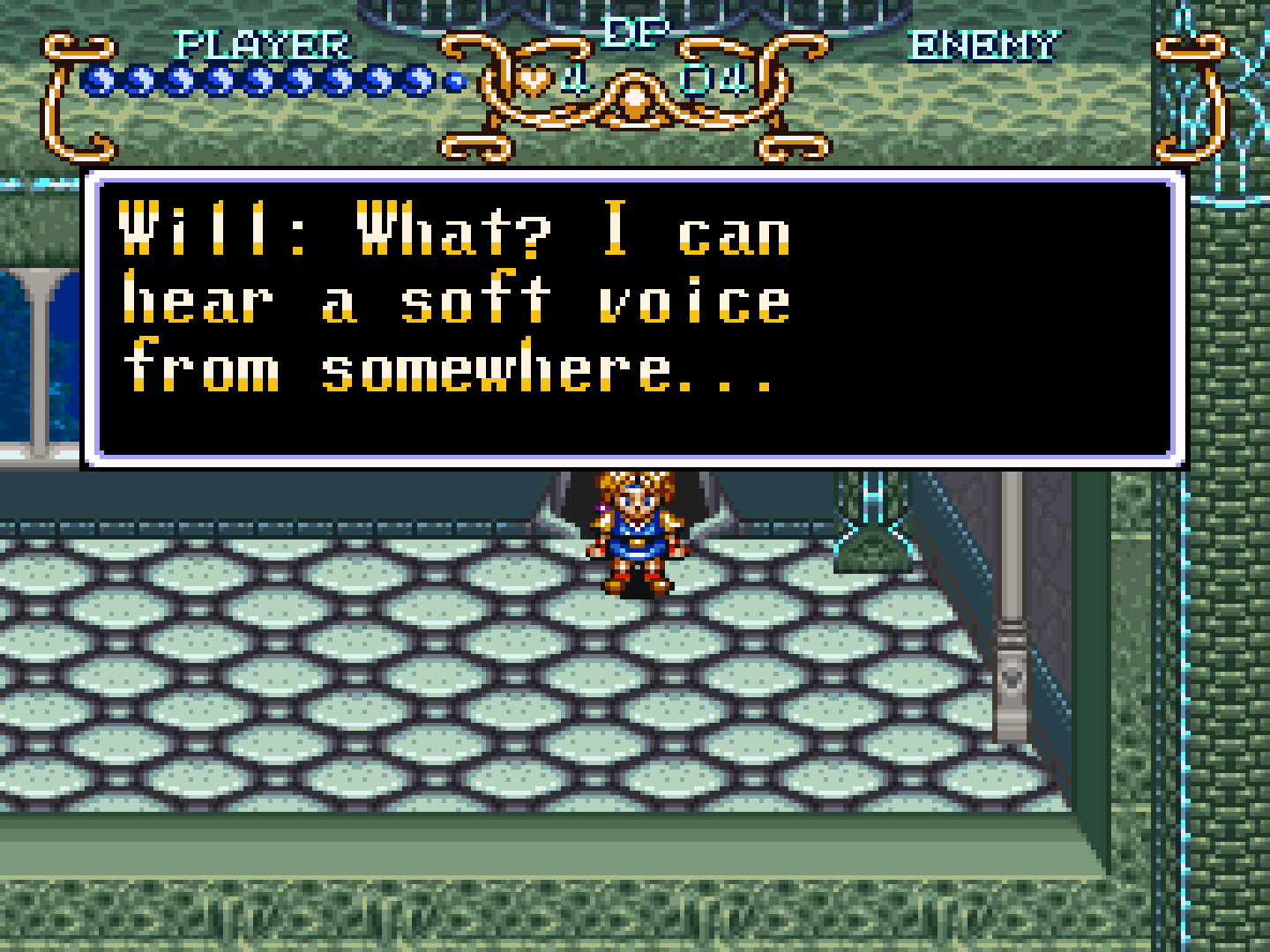 Hmmm...it seems some of our allies might be alive...

Strange voice: "This is the Palace of Vampires...The fountain in this palace produces demons continuously..." The heck is going on?

There's plenty of skeletons walking about, but no signs of life...

At the end of the corridor, there's two sets of stairs...I take the one going up.

Upstairs, Will hears someone in the room west of him.

There's Erik, or rather, a ghost of Erik! 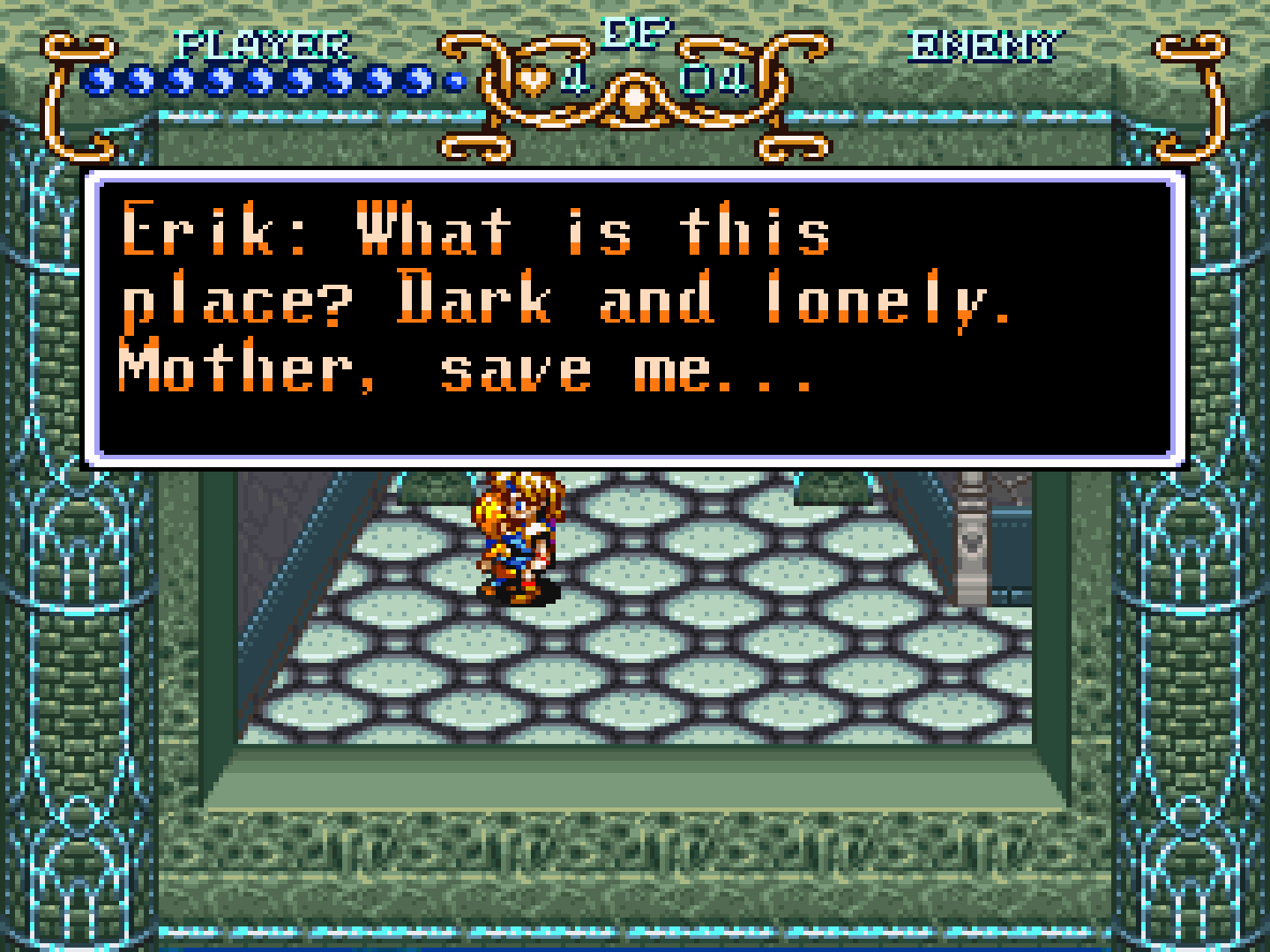 Is Erik's ghost trapped in the palace?

This must mean Lilly, Neil, and Lance are also stuck as spirits in this palace...

At the other end of the hall, I get another Red Jewel!

Back up and down to the next set of stairs, Will hears more voices... 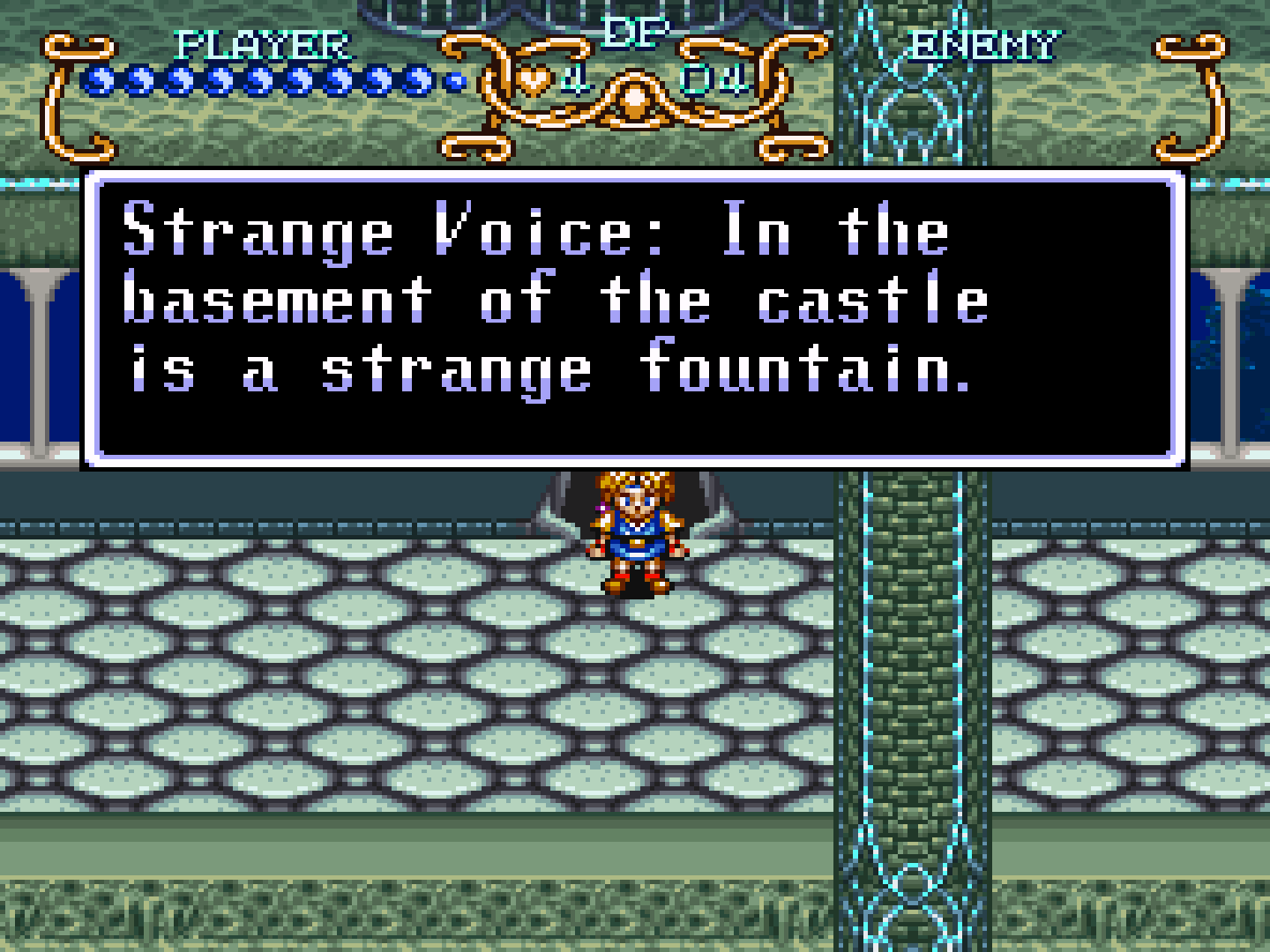 Why is the vampire talking about the fountain in this palace? Are they asking us to free them?

She jumps in fright at the sight of Will! 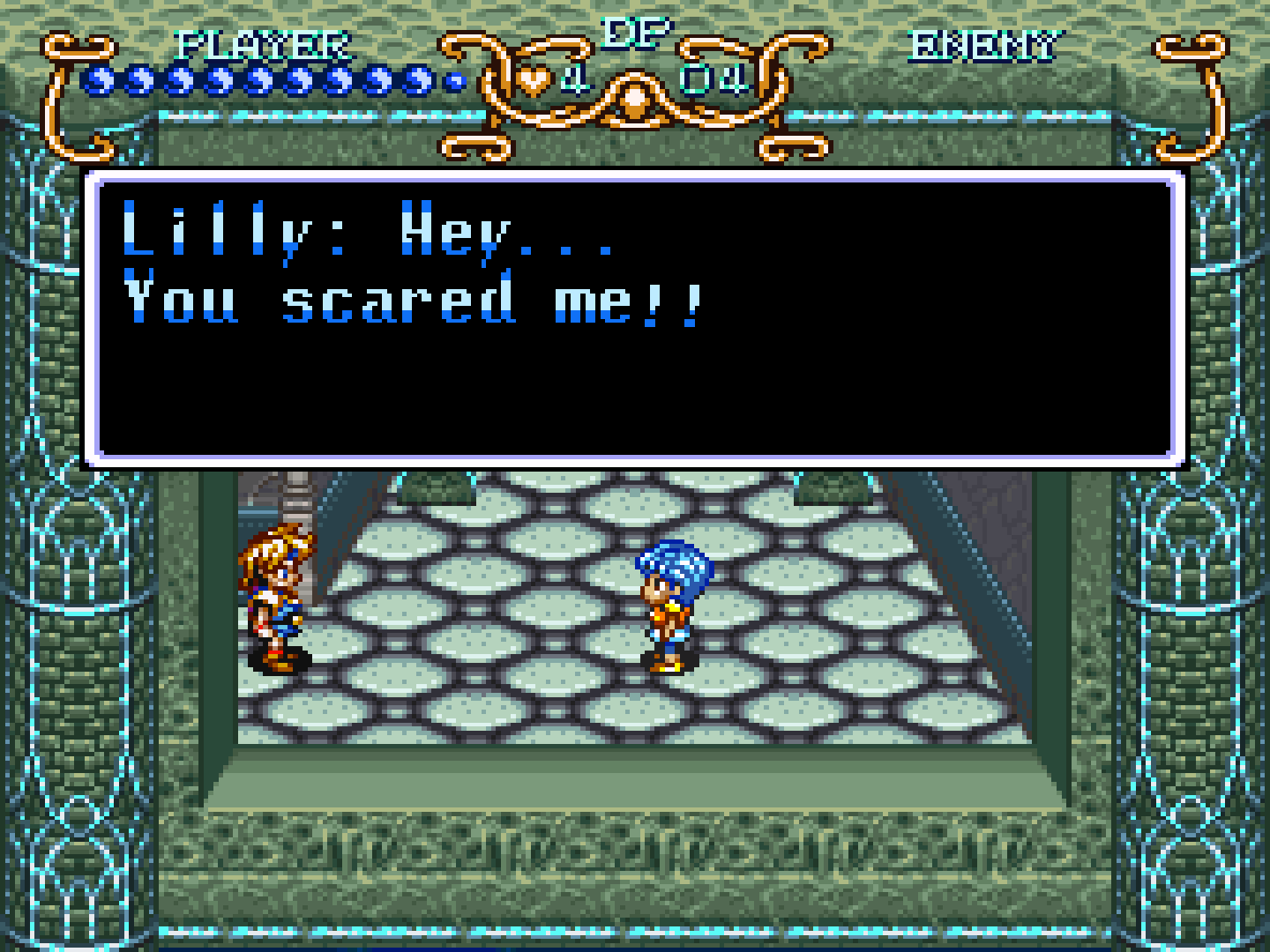 Lilly: "I practically had a heart attack!!"

She mentions that she saw Erik in the same room we went to. She knows that Erik's see-through too.

Lilly: "And he seems to be unconscious, as if his spirit is lost...Let's stick together. We don't know what will happen."

She transforms into a fairy and flies into Will's pocket.

There's two staircases, both going down.

The first one leads into a dead end...

The architecture of the palace looks pretty nice, though it feels haunted. Plus, the underwater seascape outside adds onto the mysterious beauty here.

Taking the second set of stairs down, and another set, going deeper in the Seaside Palace...

Downstairs, that voice talks to Will again. 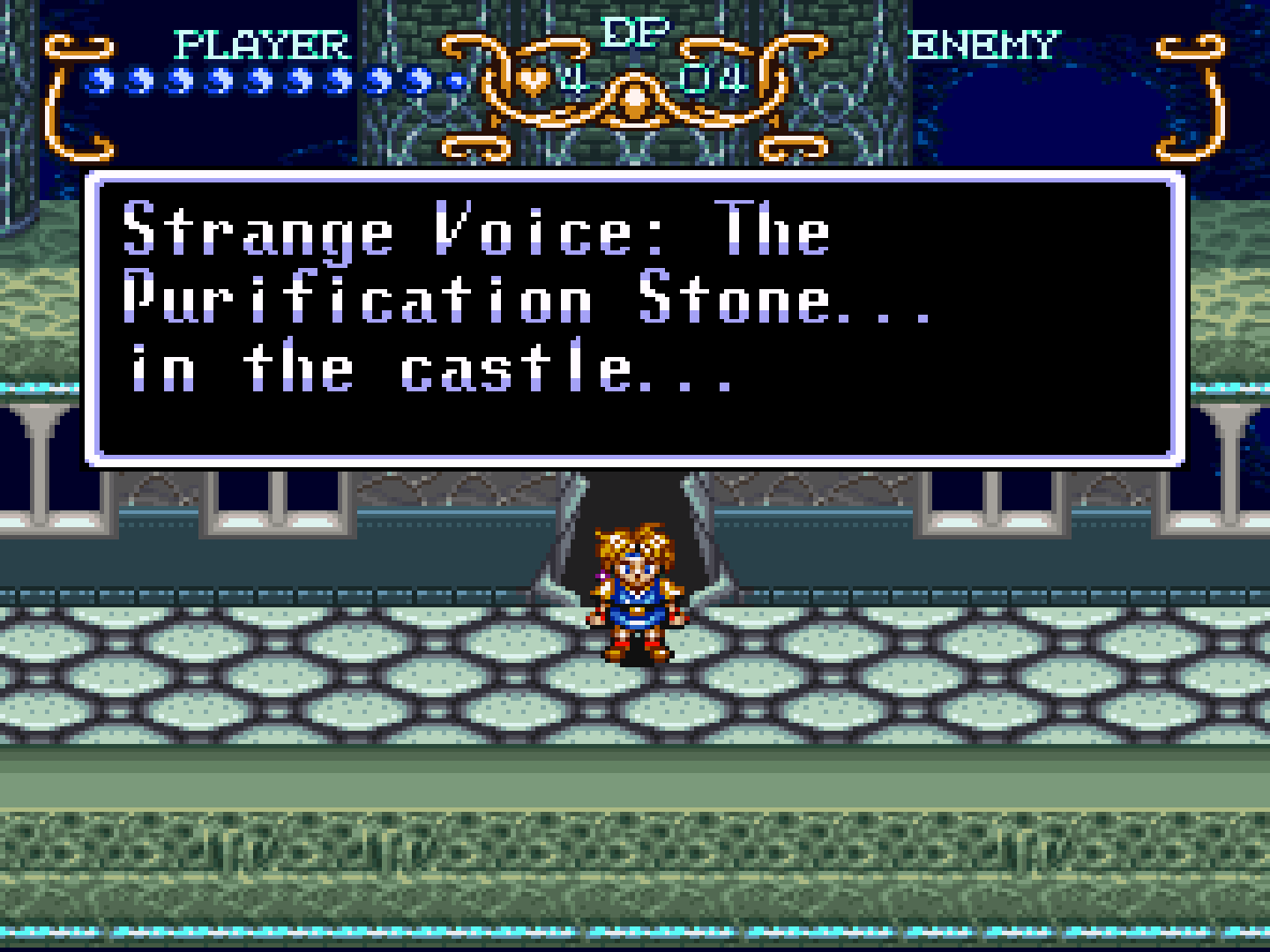 The vampire wants a Purification Stone. To cure their vampirism? Or to have us destroy it for them?

I have Will run around the hall of this floor. There's only one way down...

We're now at the bottom of the palace. 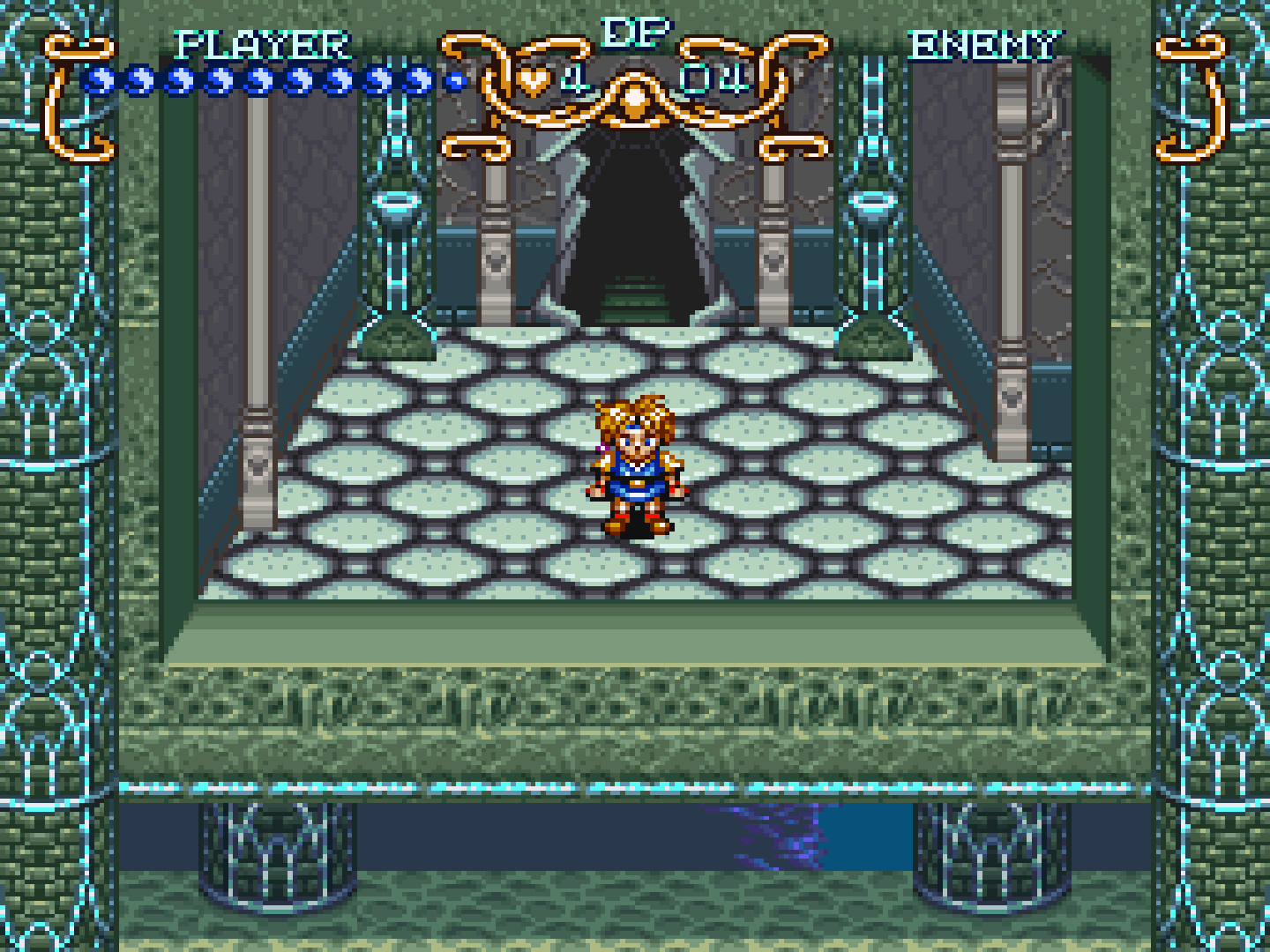 Climbing down the long stairway to the sunken bottom... 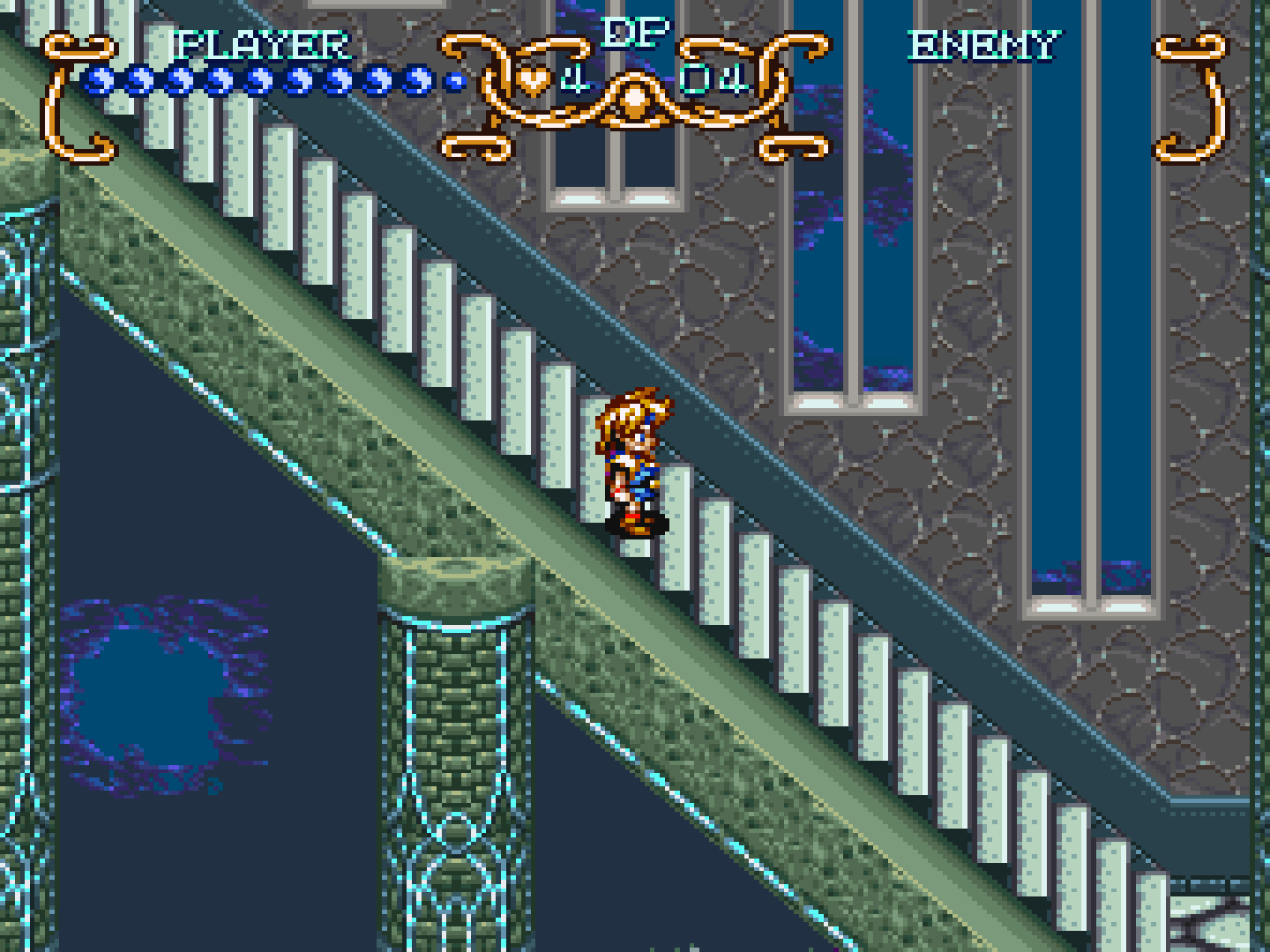 We meet our first monster in the palace: a Blue Slime!

Checking our map, there's a population of enemies here!

After enemy number 2, I decide to turn the long way back to recover and save at the Dark Space portal before facing them!