Crossing the platforms, we face the next boss!

Each piece of the bridge begins to crumble as we continue forward...

We make it to the platform, where our next boss is a statue head with wings! 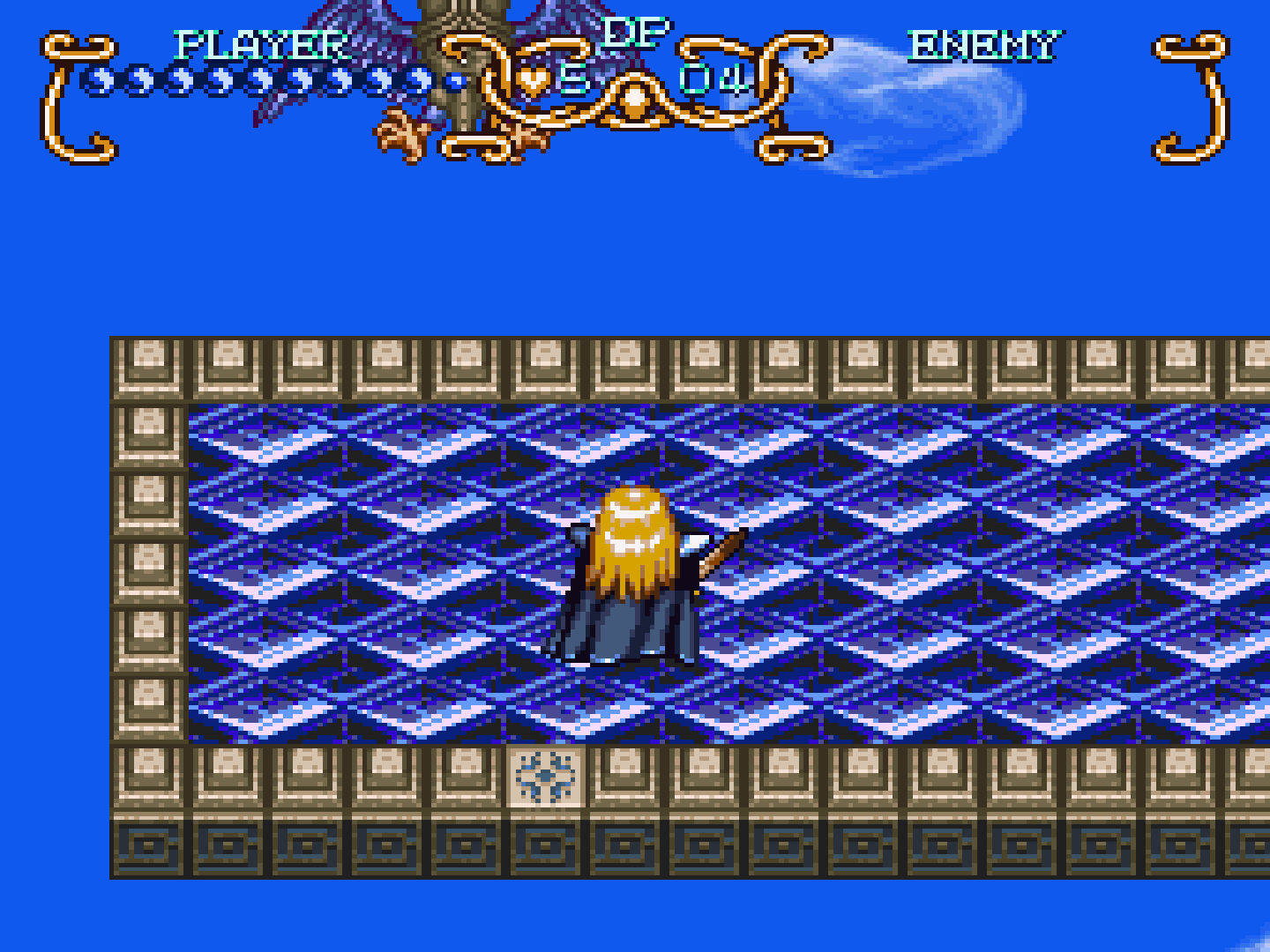 I also have to be careful of the falling debris!

The statue head shoots out crystals from their mouth!

I manage to get a few hits on the boss!

Knowing I'm finished, I do my best to survive this boss...

This boss also has a few surprises! They can shoot feathers like arrows!

And the boss finishes us off quickly!

I recover at Dark Space before take two at the flying statue head!

Since this is a flying boss, they can also blow gusty drafts at us with their wings!

The debris, I find out quickly, isn't hurting us at all! It's only the boss!

I use up a herb, and a brief moment later, with careful dodging and timing, I watch the mini-fireworks display! 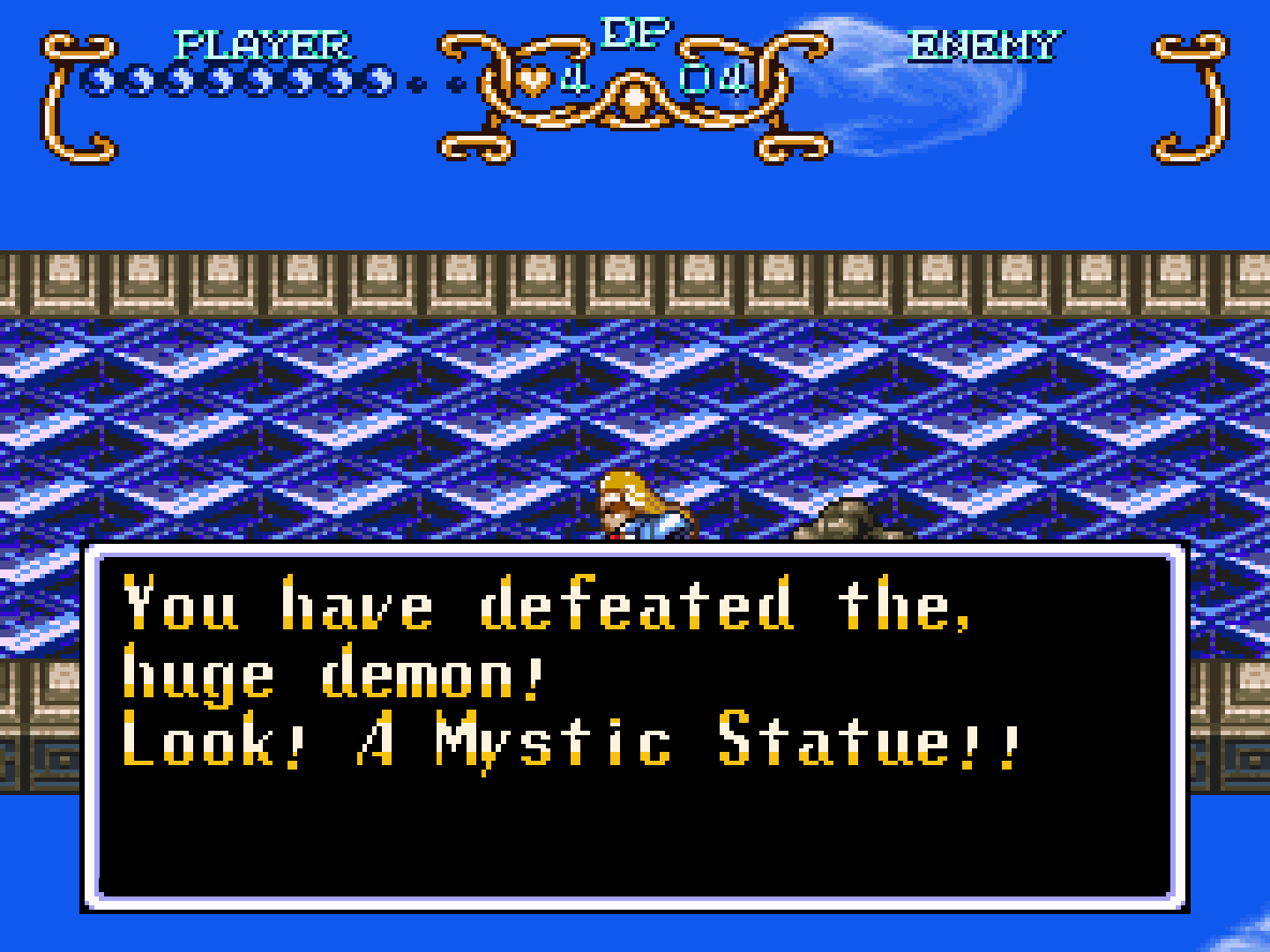 The menu shows us the Mystic Statues we currently have so far...there's four left to obtain.

Freedan transforms back into Will... 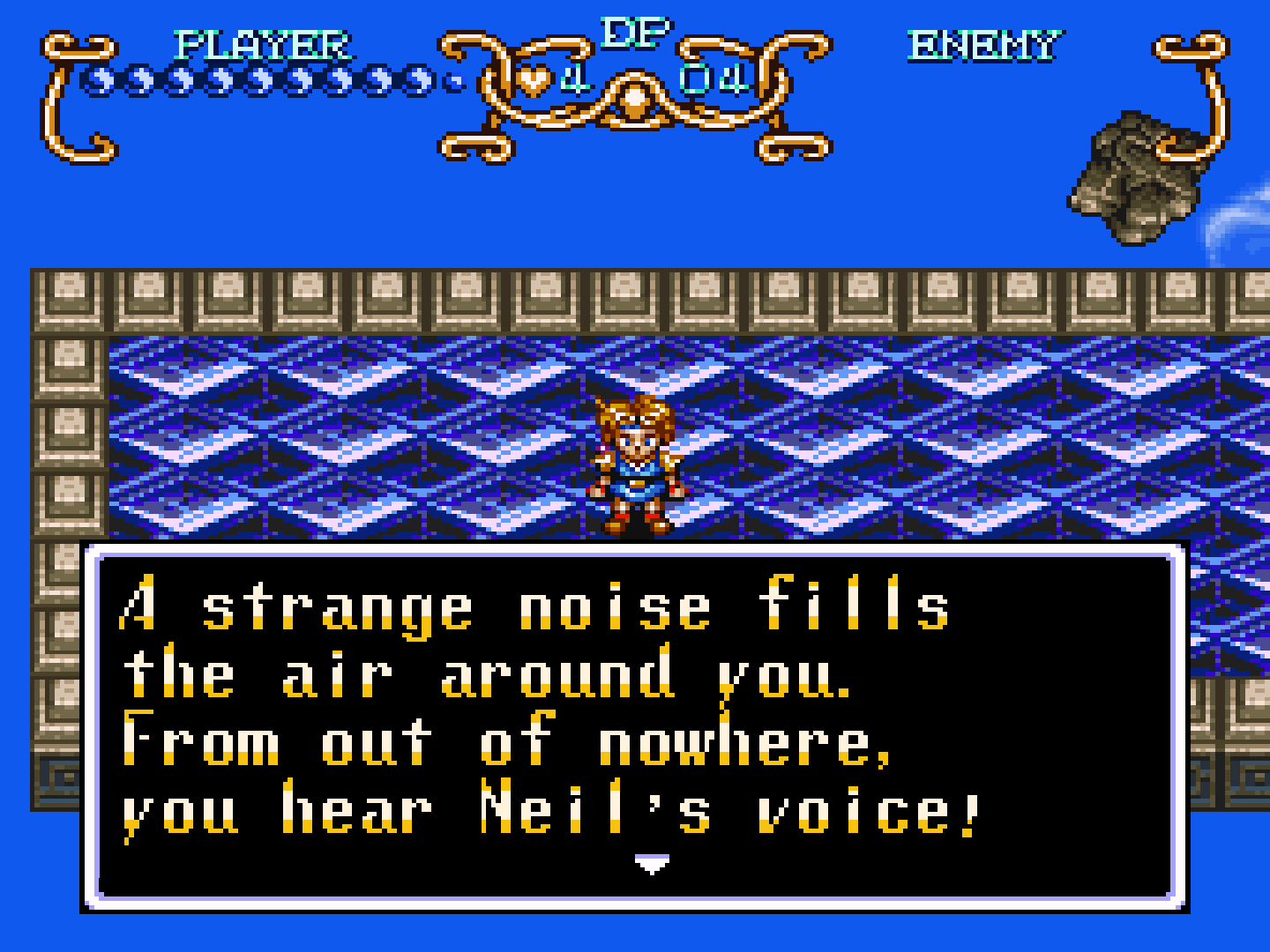 Neil: "Will! You're falling to the ground!!!! Grab the airplane, and we'll fly out of here!"

I have Will jump down the falling platform... 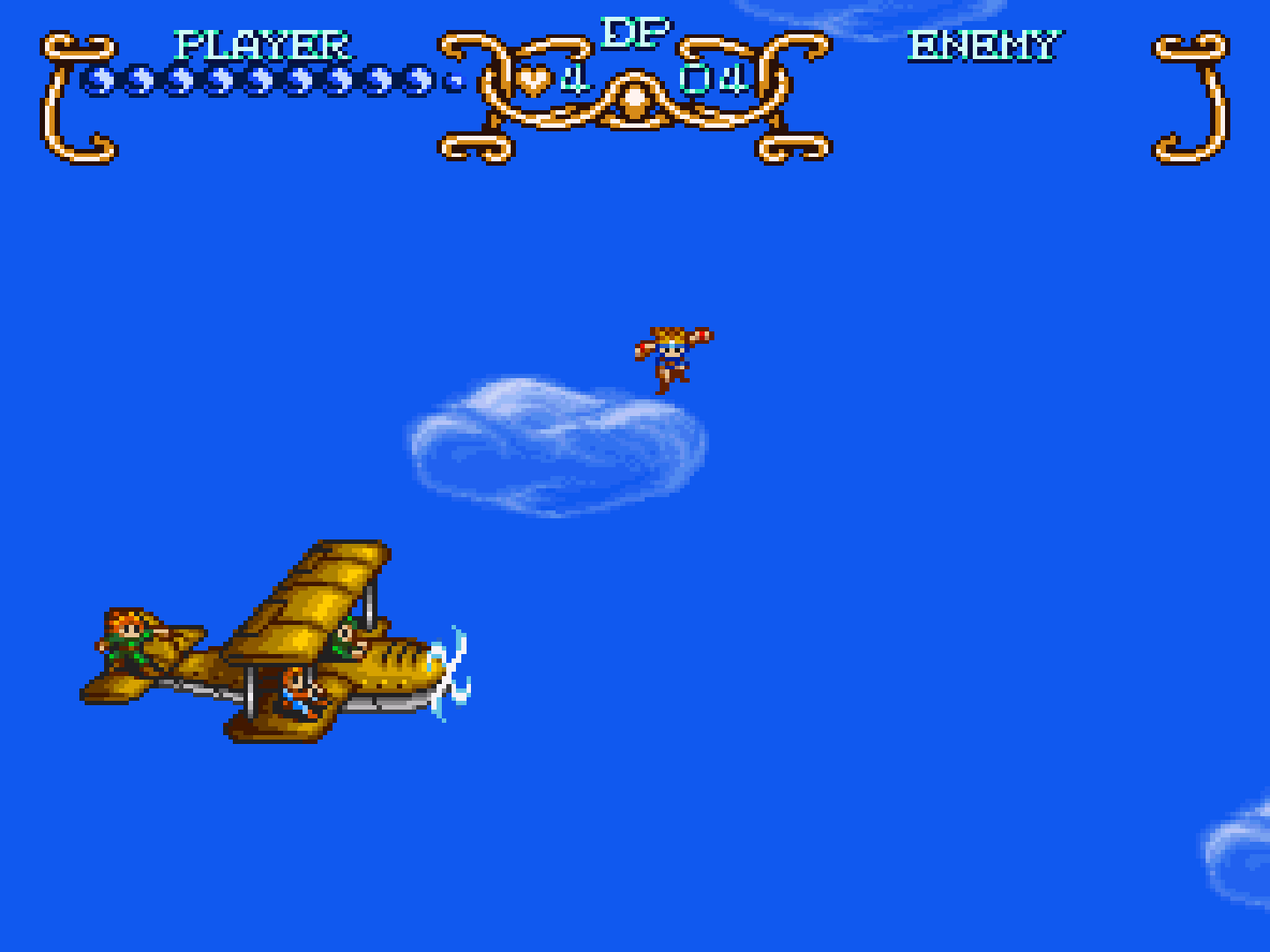 ...and into the body of Neil's airplane!

But, Will misses the landing!

Kara chastises him for missing Will. Lance encourages Neil to try again! 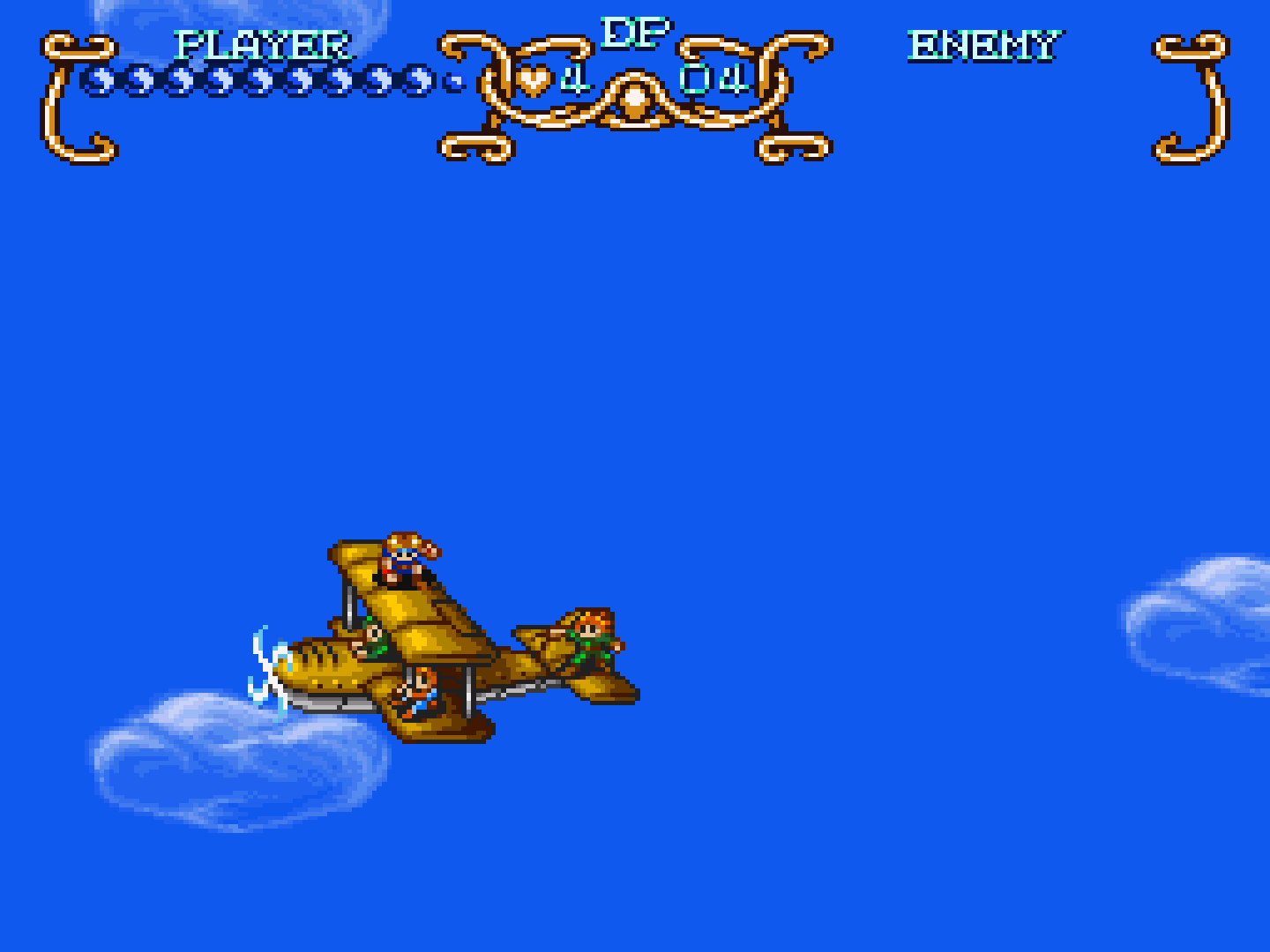 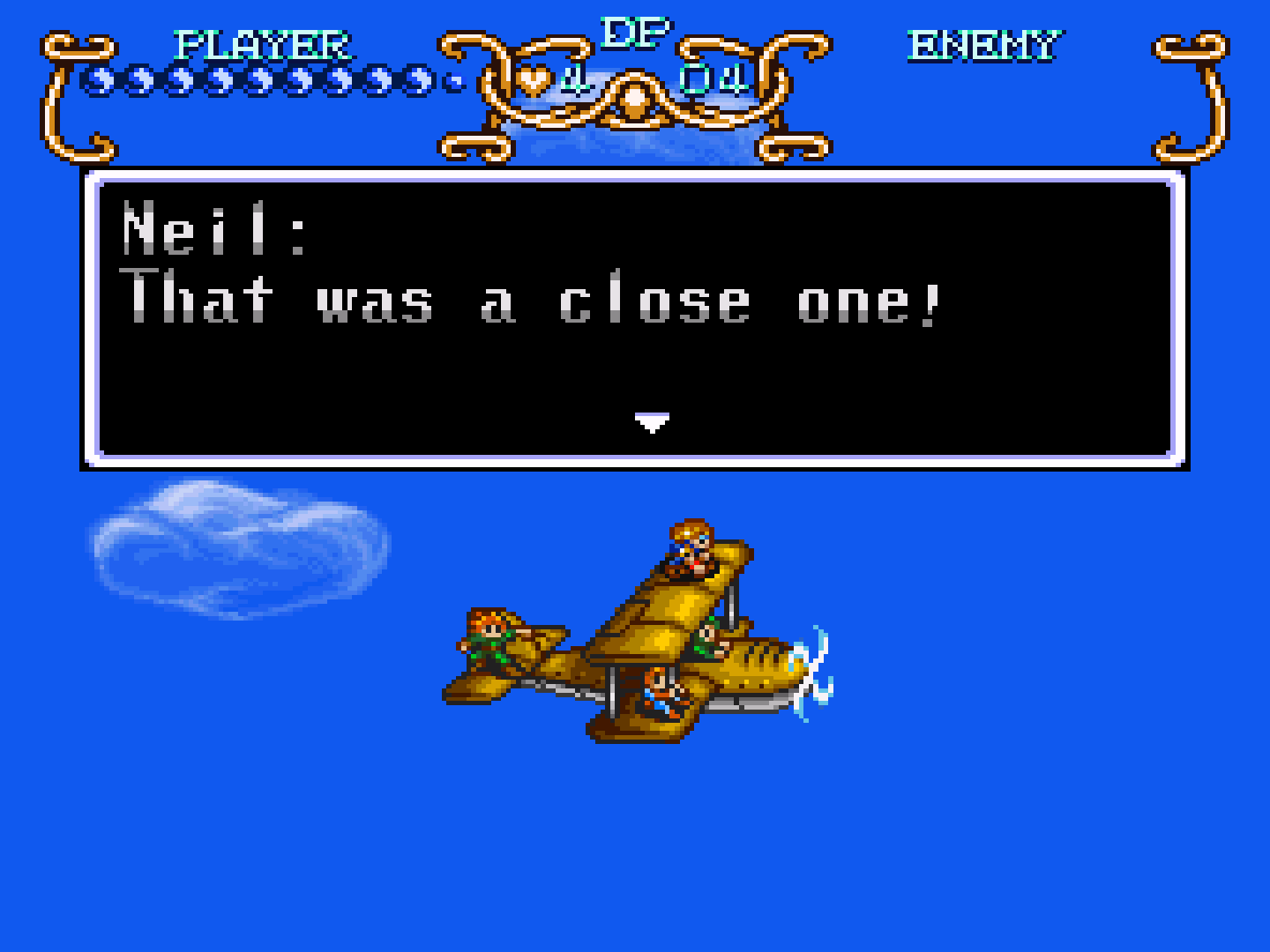 Kara and Erik are weeping at the close call...Lance tells them to calm down. Lance, let them cry...

Lilly compliments Neil and his airplane for saving Will.

Now we have to find ruin number three. Maybe the next ruin is in Sam's country.

Neil gives us a hint on where the next ruin is. 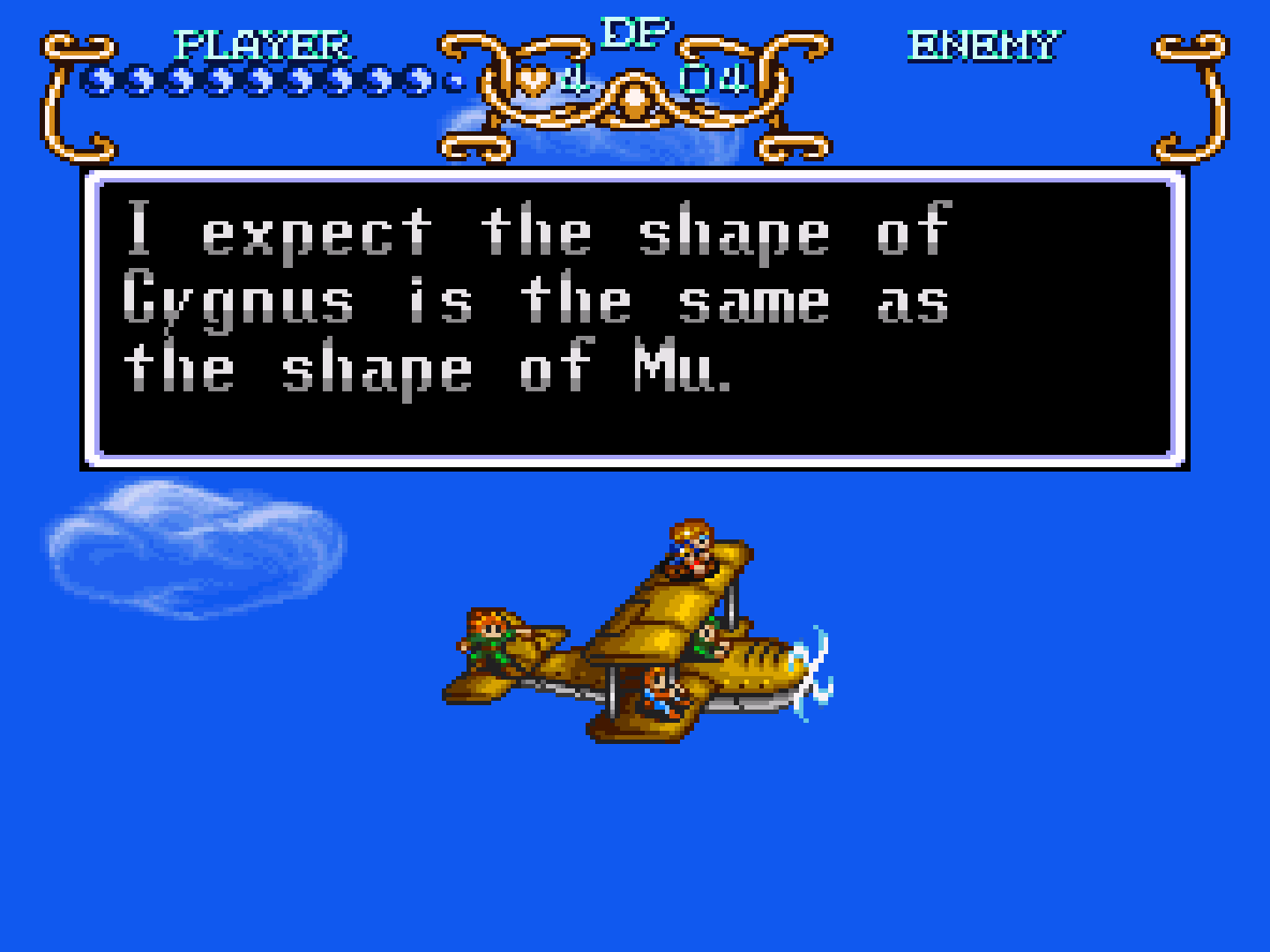 Neil flies to the ocean, mentioning the temple of Mu around there.

The Mode 7 graphics in this game look so excellent... 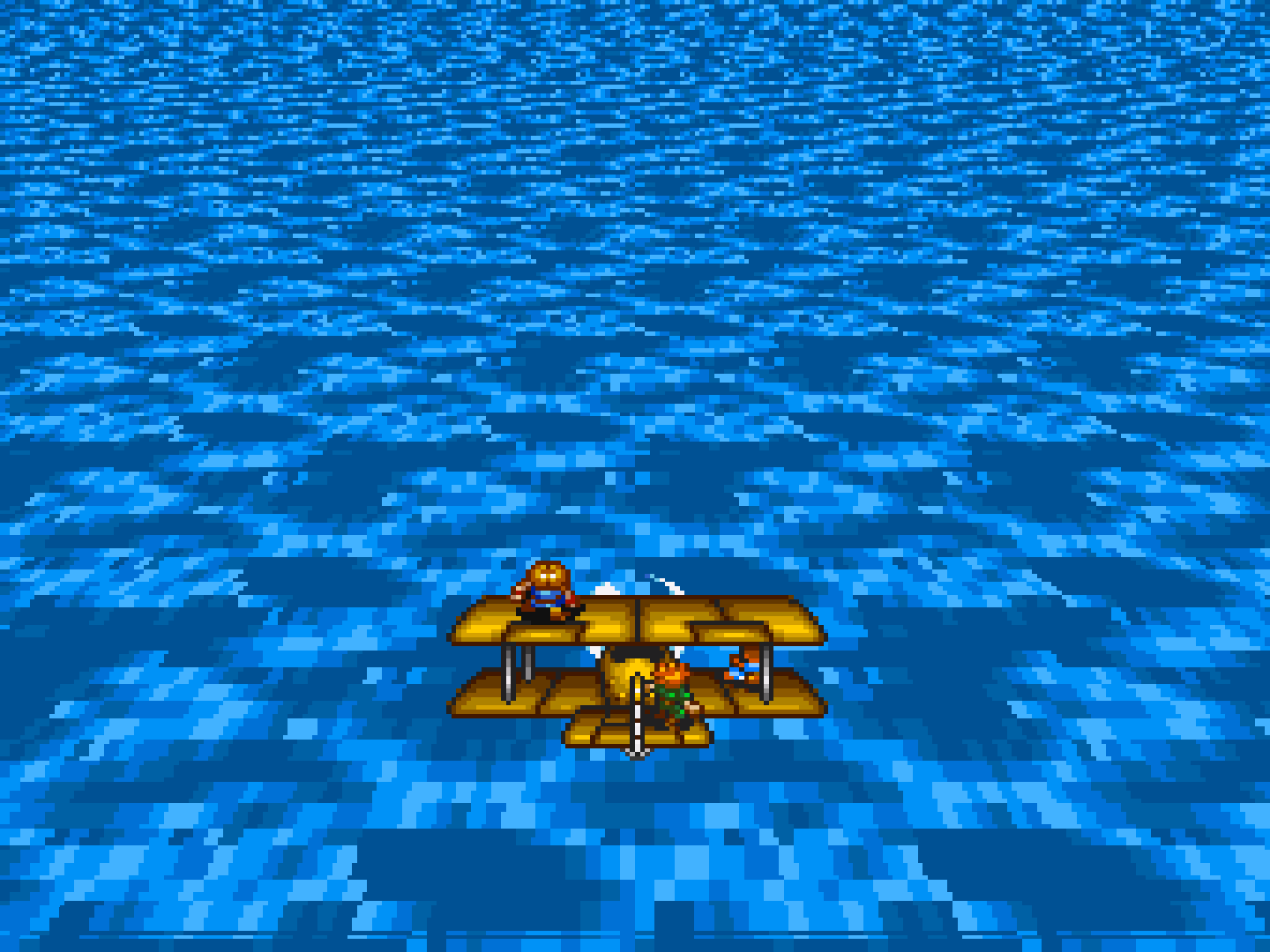 I wish we could control the airplane...

Did the airplane explode, or did something shoot at it?

Everyone's parachuting down to the ocean... 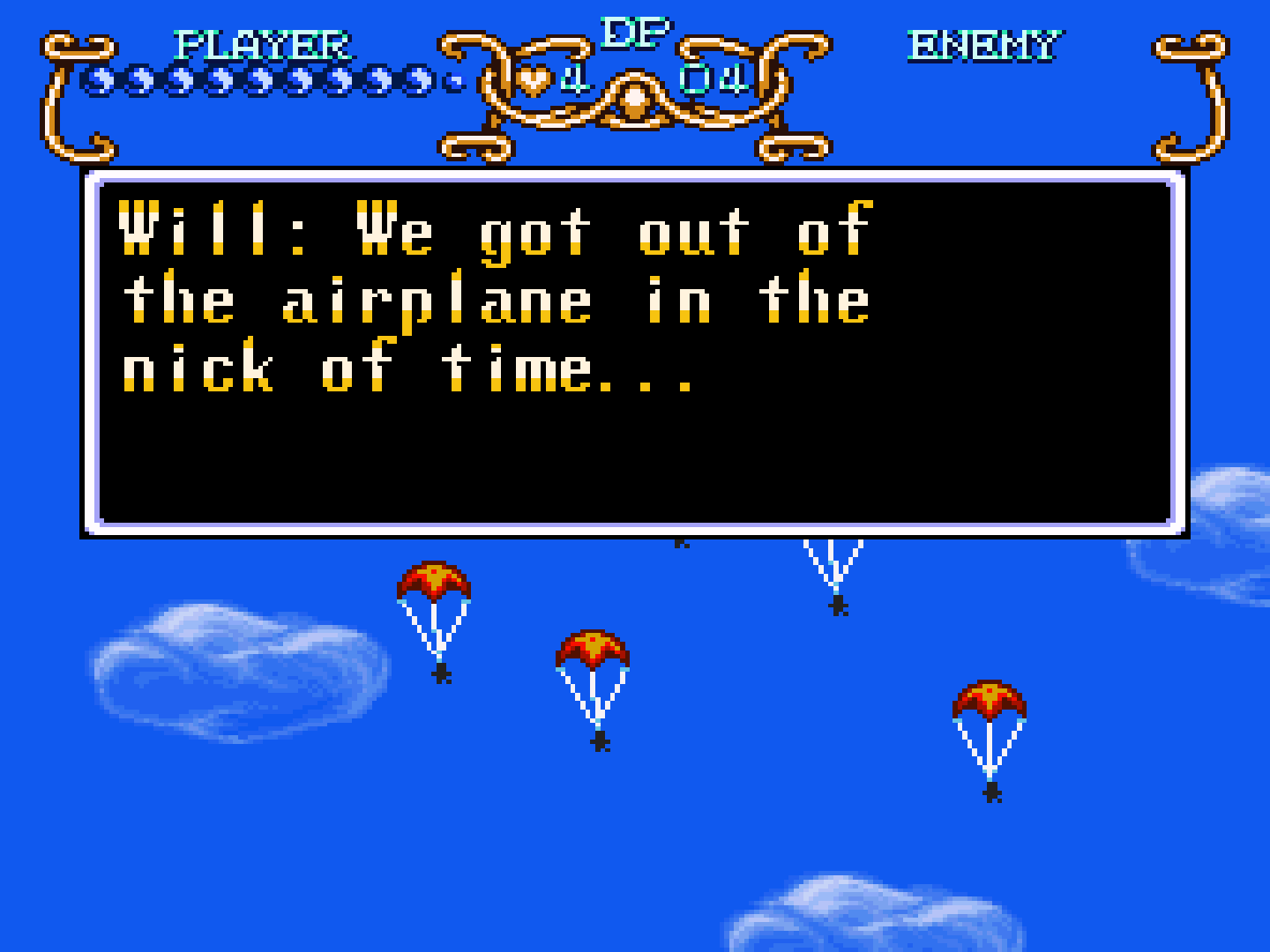 "Neil's a good inventor, but it seems there's always something missing in his inventions...I guess nobody's perfect, including Neil."

Will wakes up in a room in front of a fancy locked door...

"The next thing he knew, Will was standing in a huge palace."

Will: "I couldn't remember anything since the water landing...Is everyone safe?"

Yeah, is everyone alright? And where are we? 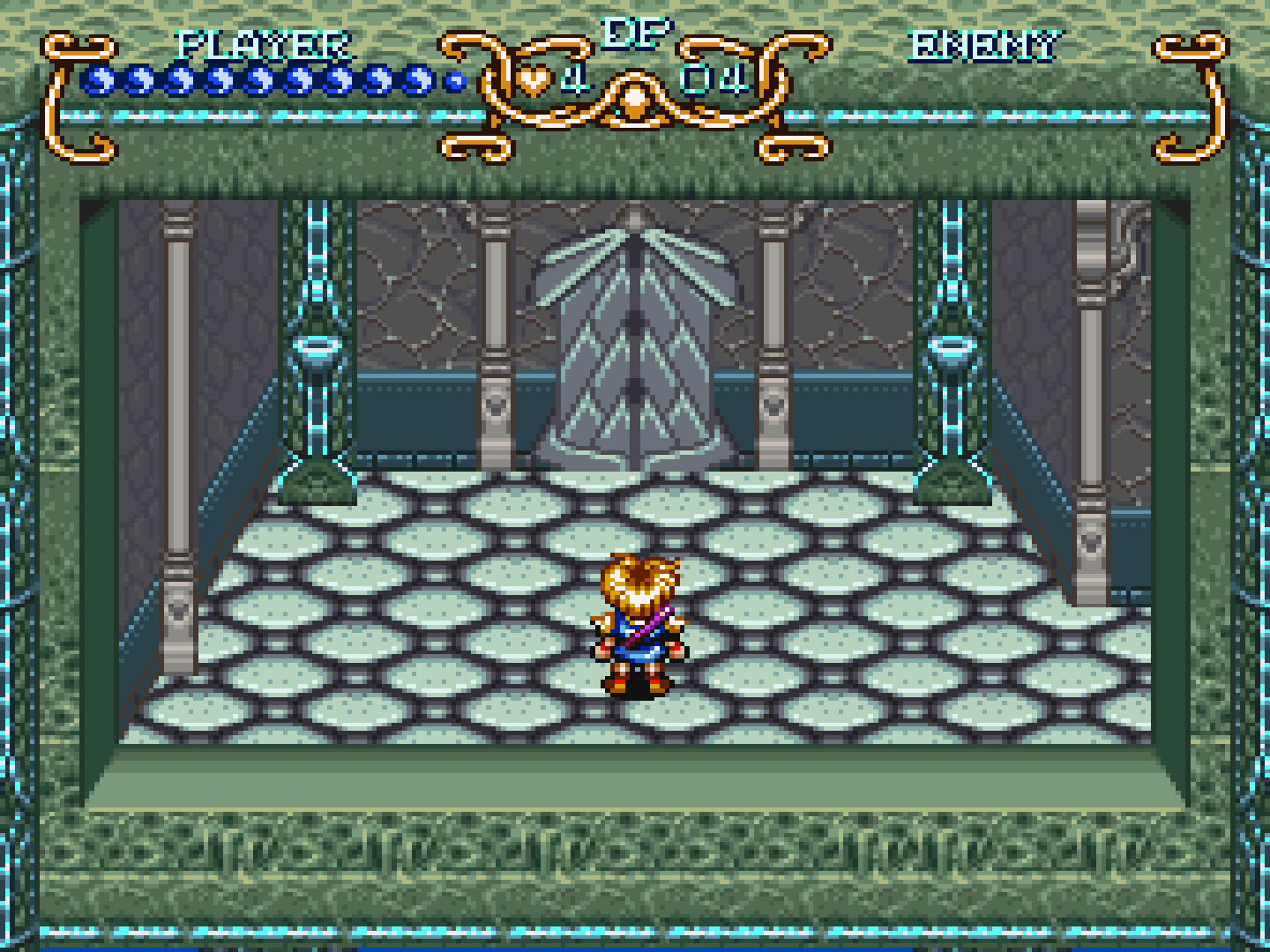 Going east, we see a skeleton!

By the looks of the temple outside, and the waves above, we must be underwater!

Checking the map, I see a blue dot. We're near a Dark Space portal yes!

Striking at the skeleton, he freezes!

Inside the portal, I save and stop my session for today.