Now for the third passage in this pretty garden!

There's raised pillars west of the sphinx statue. Could this be lowered with another puzzle? 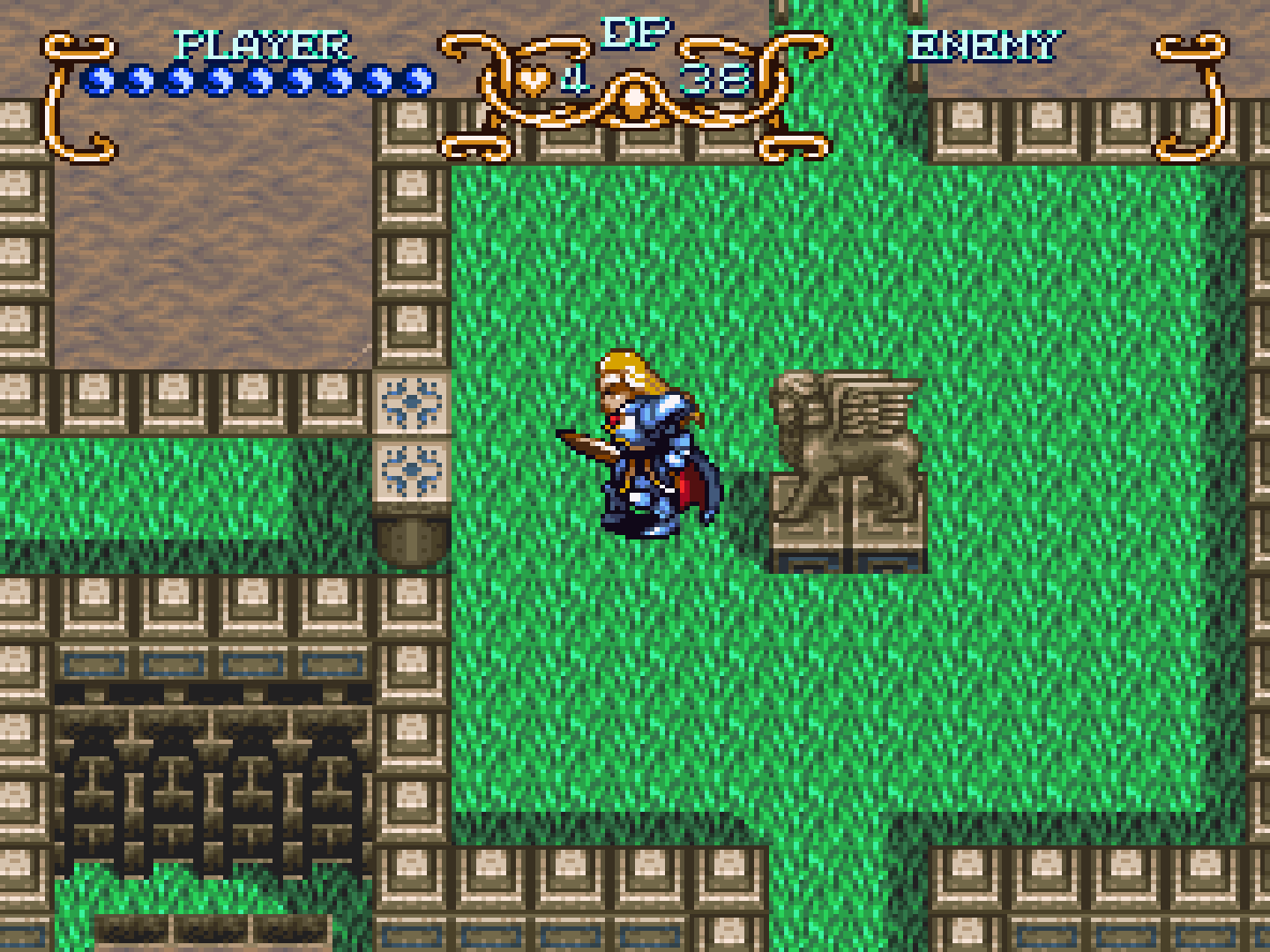 A passage north opens after taking care of a group of enemies in a chamber of blocks.

A dead end here save for two metal ball worms.

South, there's two passages to head to. Noticing a set of statues east, I go there, but...

...a small incline bars my path! 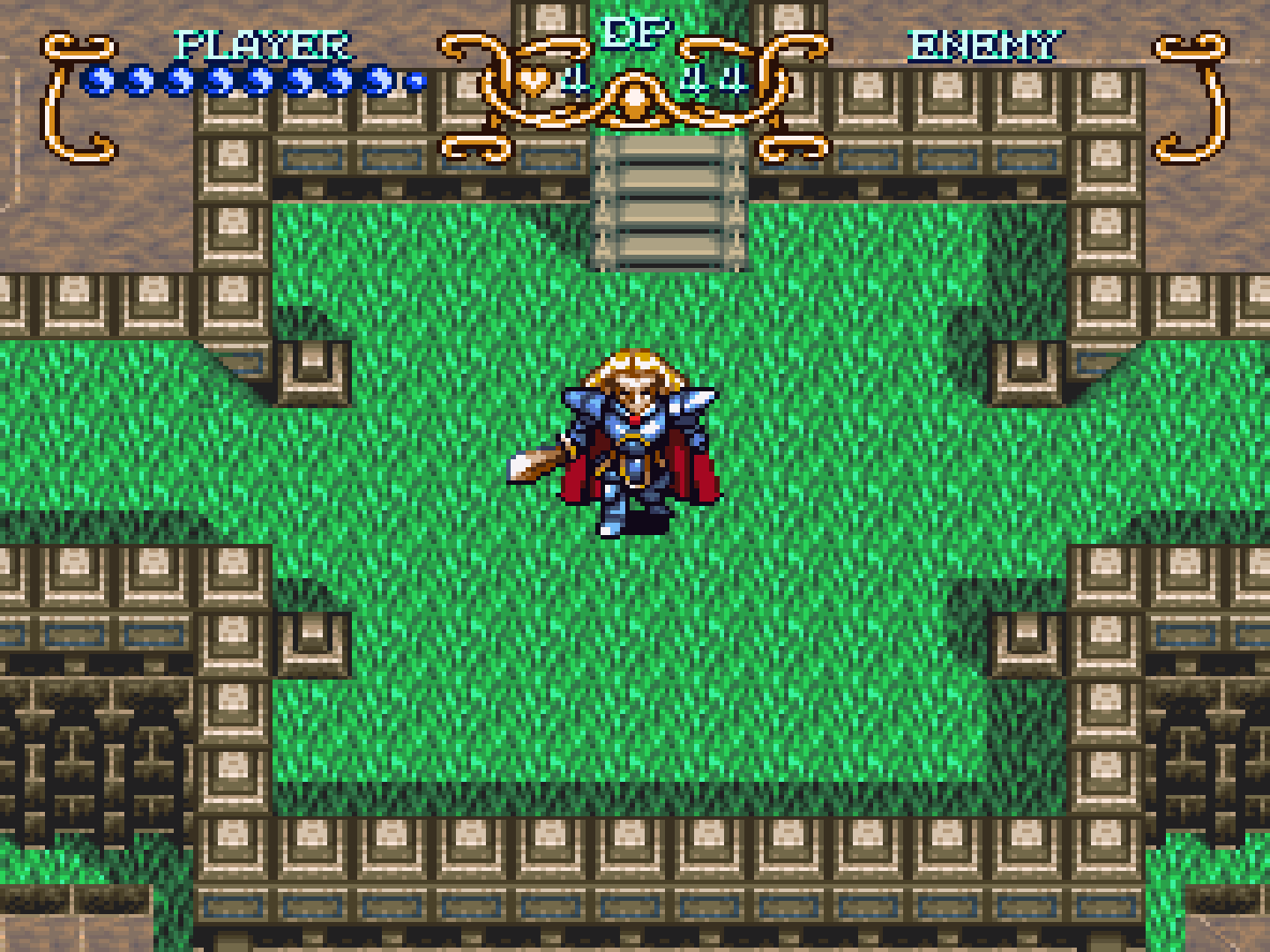 After a few tries running up the incline, I go west, which also has a ramp. I then return to the hub, and switch back to Will. His dash might be helpful here...

A few minutes later, I still can't climb up to either ramp, so I have Will transform into Freedan.

Nothing so far is helping. Plus, I'm getting sleepy, so I stop my session for now.

Looking at a playthrough video, I did not notice a way into the upside-down part of the garden! 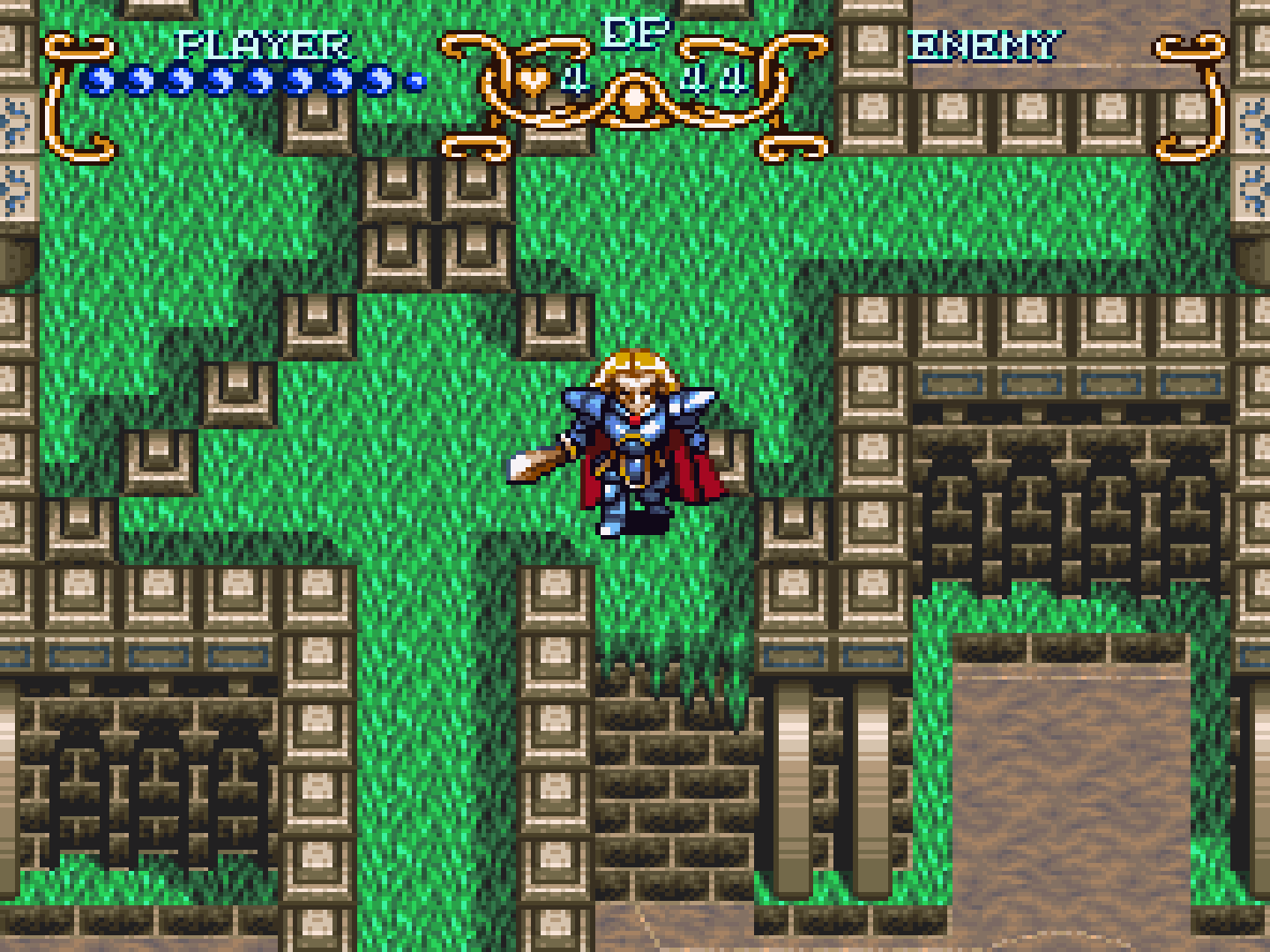 After a brief break, I get back into the action!

Once I reach the upside-down garden, I notice two switches. Both affect the pillars on the surface! 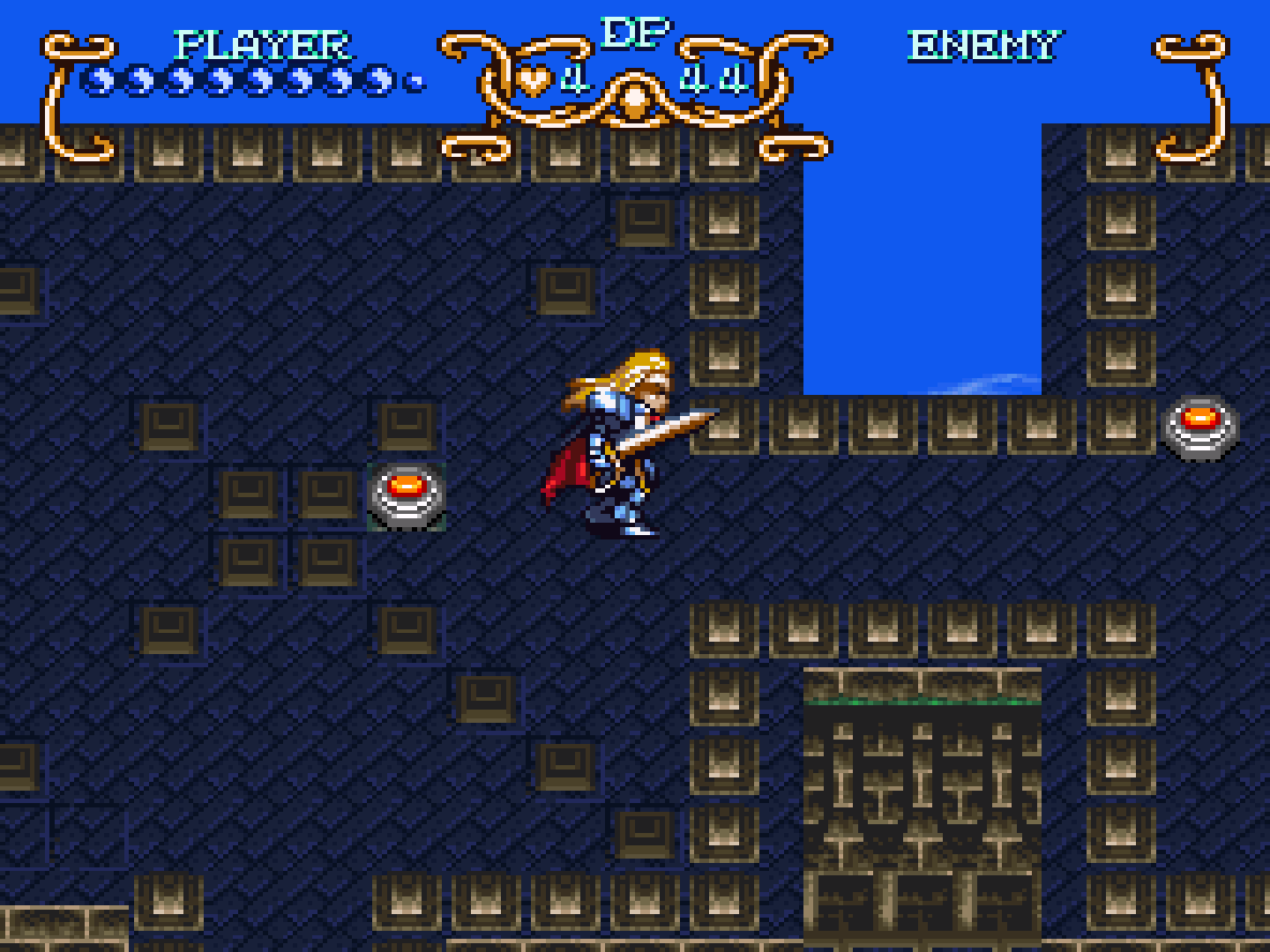 I activate each one of the buttons to see the changes before deciding on keeping the west switch on.

West of where I entered, I spot a chest with a Red Jewel!

Going back to the surface, the passage west is now open! 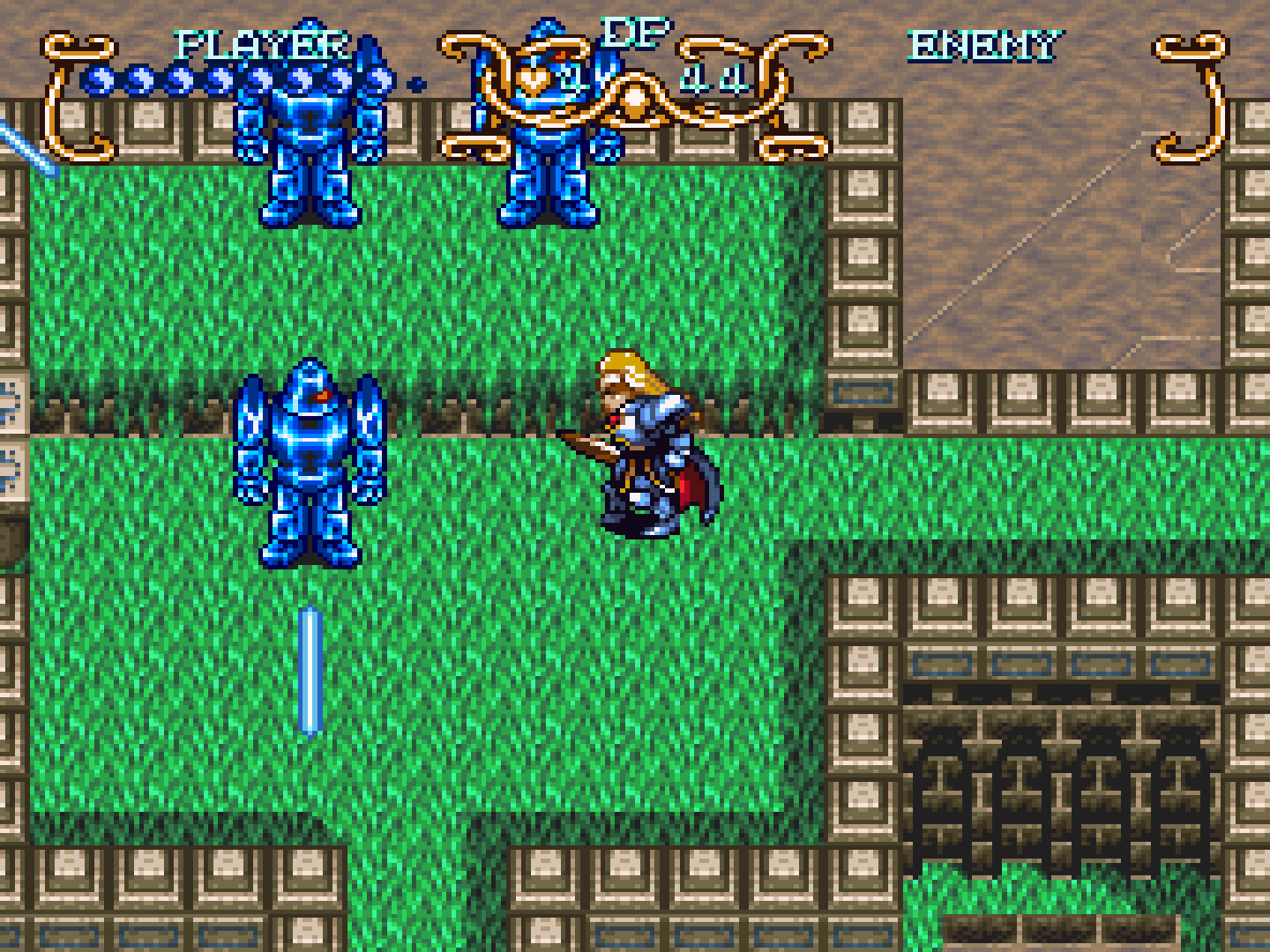 There's a crowd of colossi!

Taking care of one of them opens a staircase to where I can take care of the other two!

There's fireballs in this part of the garden too, huh? 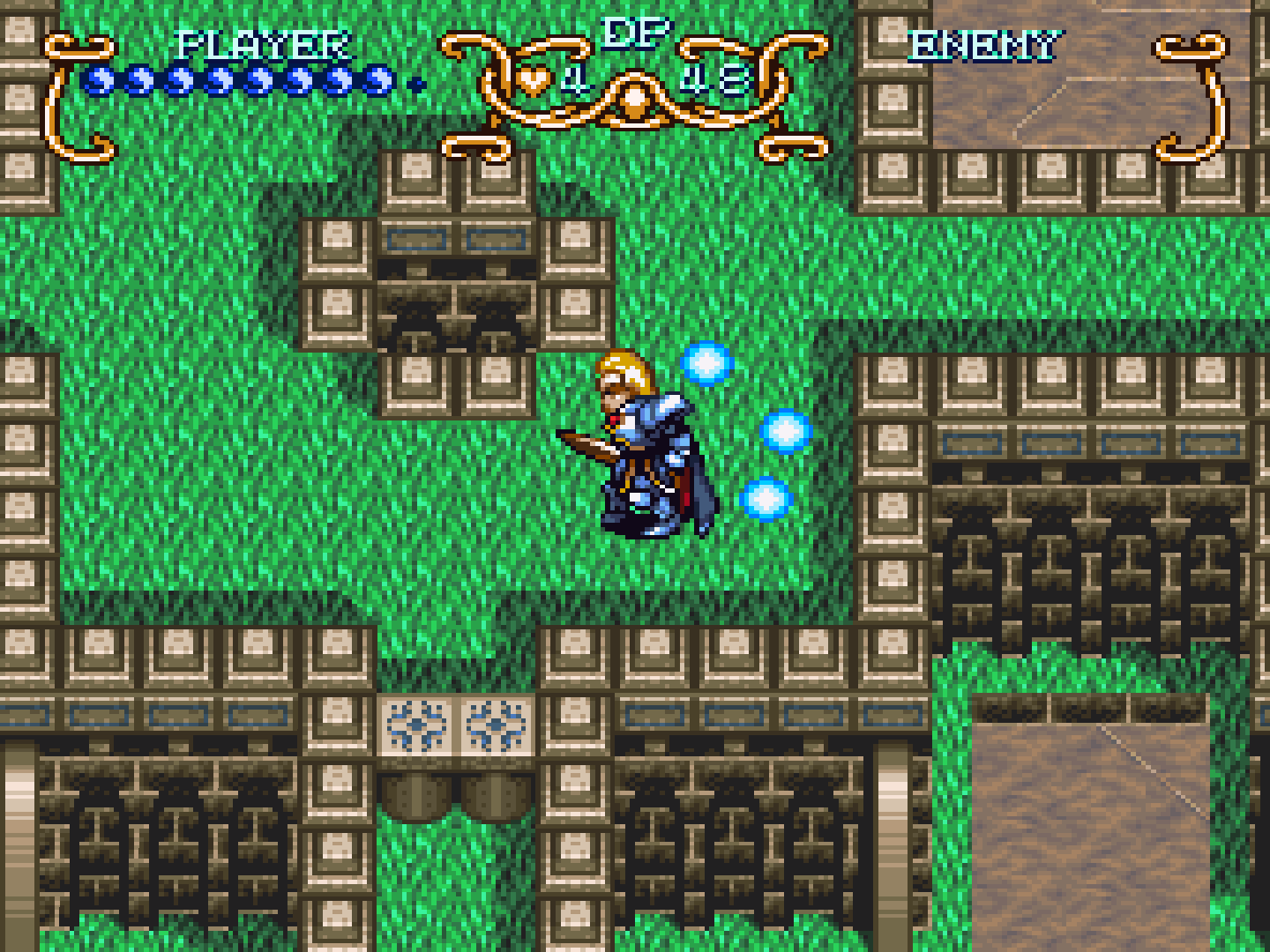 At the west end of this area, three more colossi await!

North of that is another Dark Space portal! But raised pillars block the way! 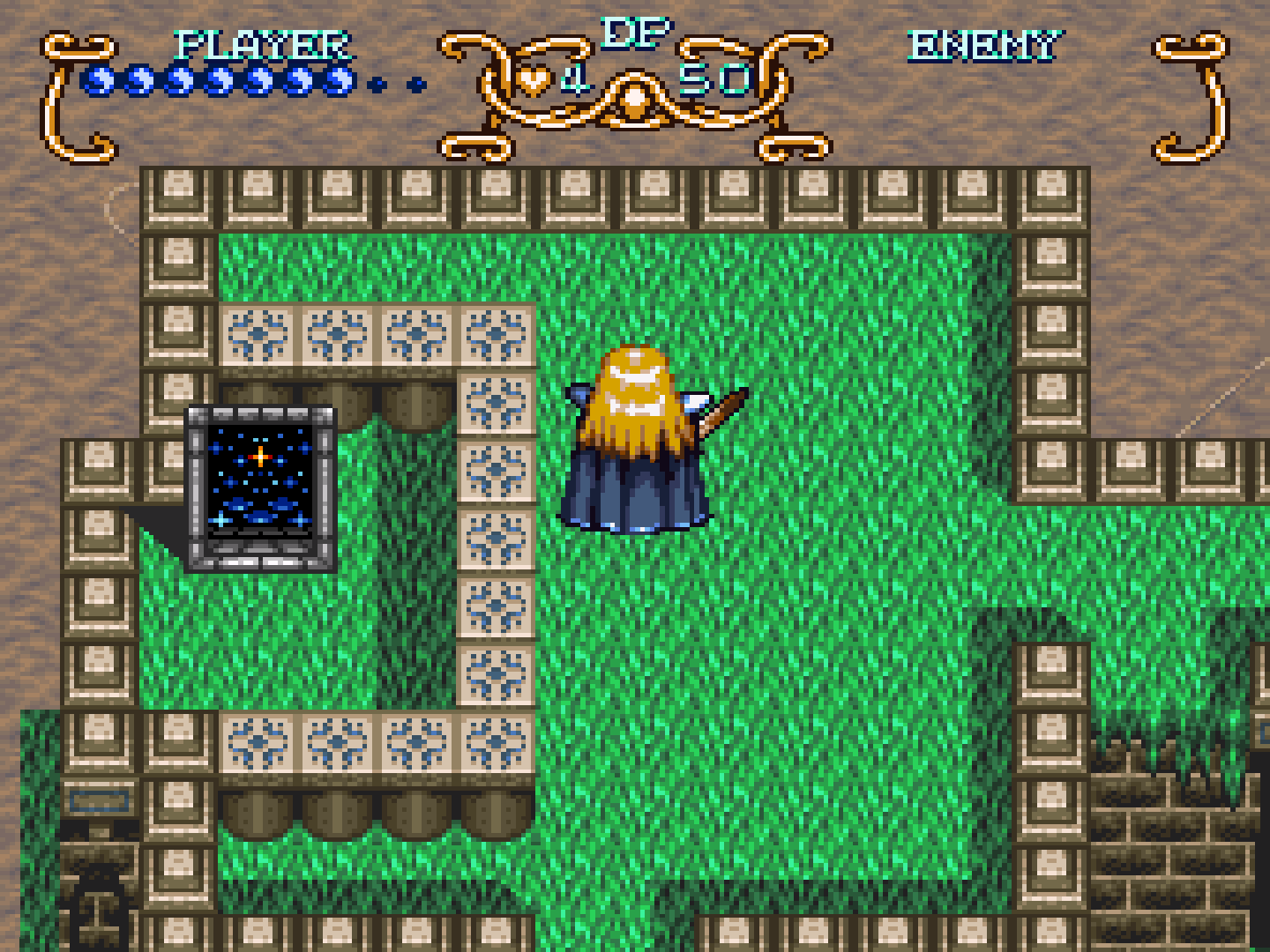 South of the far west passage leads to a chest, but the ramp prevents us from grabbing what's inside.

Not knowing what else to do, I go down to the upside-down section! Nothing else to be found there either...

Near where I first encountered a trio of colossi, I see another pit to jump down to! This area's gaps are hard to find...

Now we're on the other side of the eagle statue chamber...

Seeing a switch surrounded by lowered pillars, I use Freedan's Dark Power to press it, knowing we'll be trapped if we activate it directly.

Inside Dark Space, I turn back into Will and save.

I return to the area with the ramps, but the statues block our way forward.

Going downhill, I move them to the edge of the ramp and circle around the garden...

We're near another steep ramp. Using this will take us to the chest, but the set of raised pillars block the way. 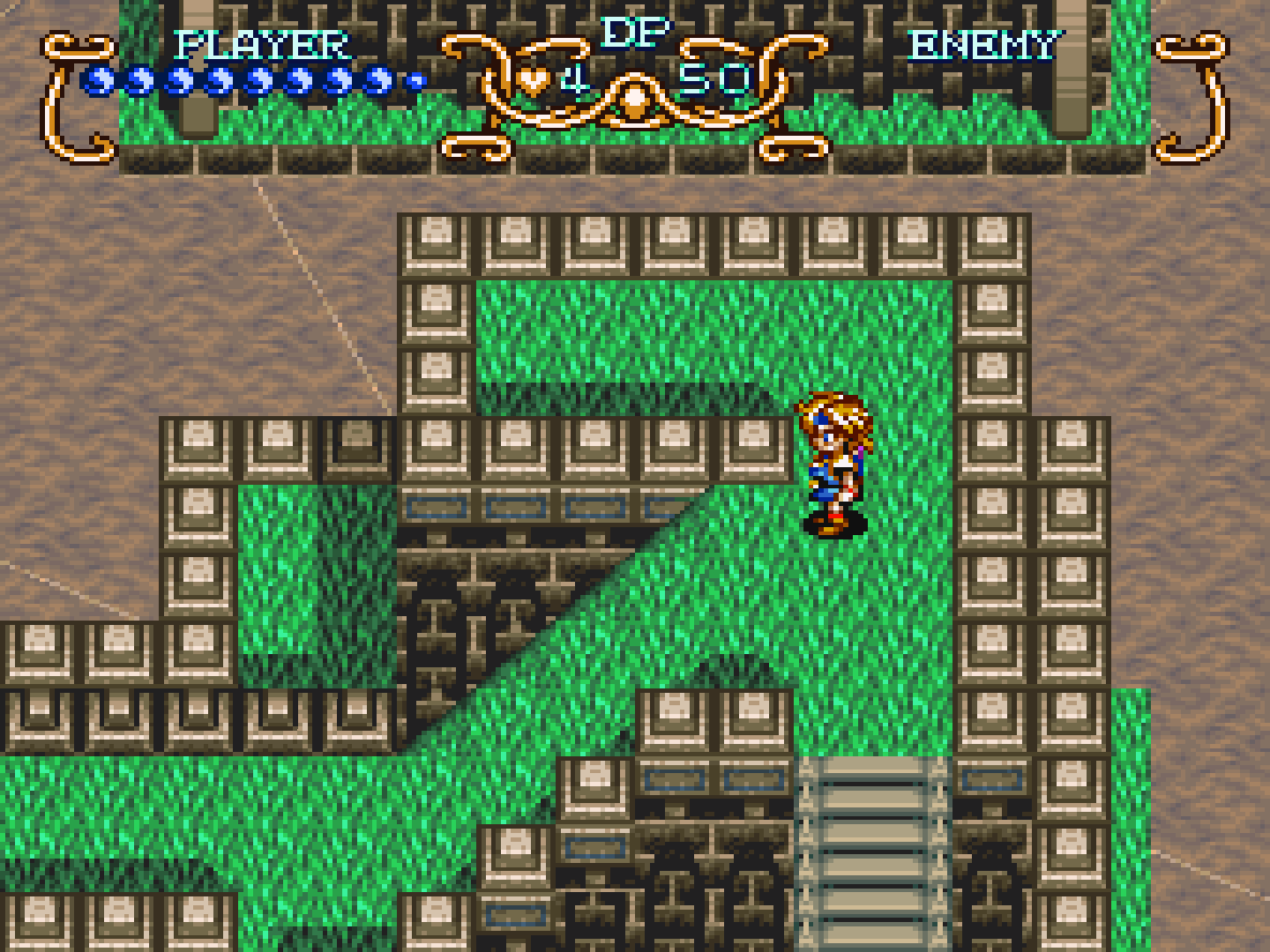 I have Will jump down the gap back to the underside of the garden.

The flanking statues here tells me they're guarding something important ahead. 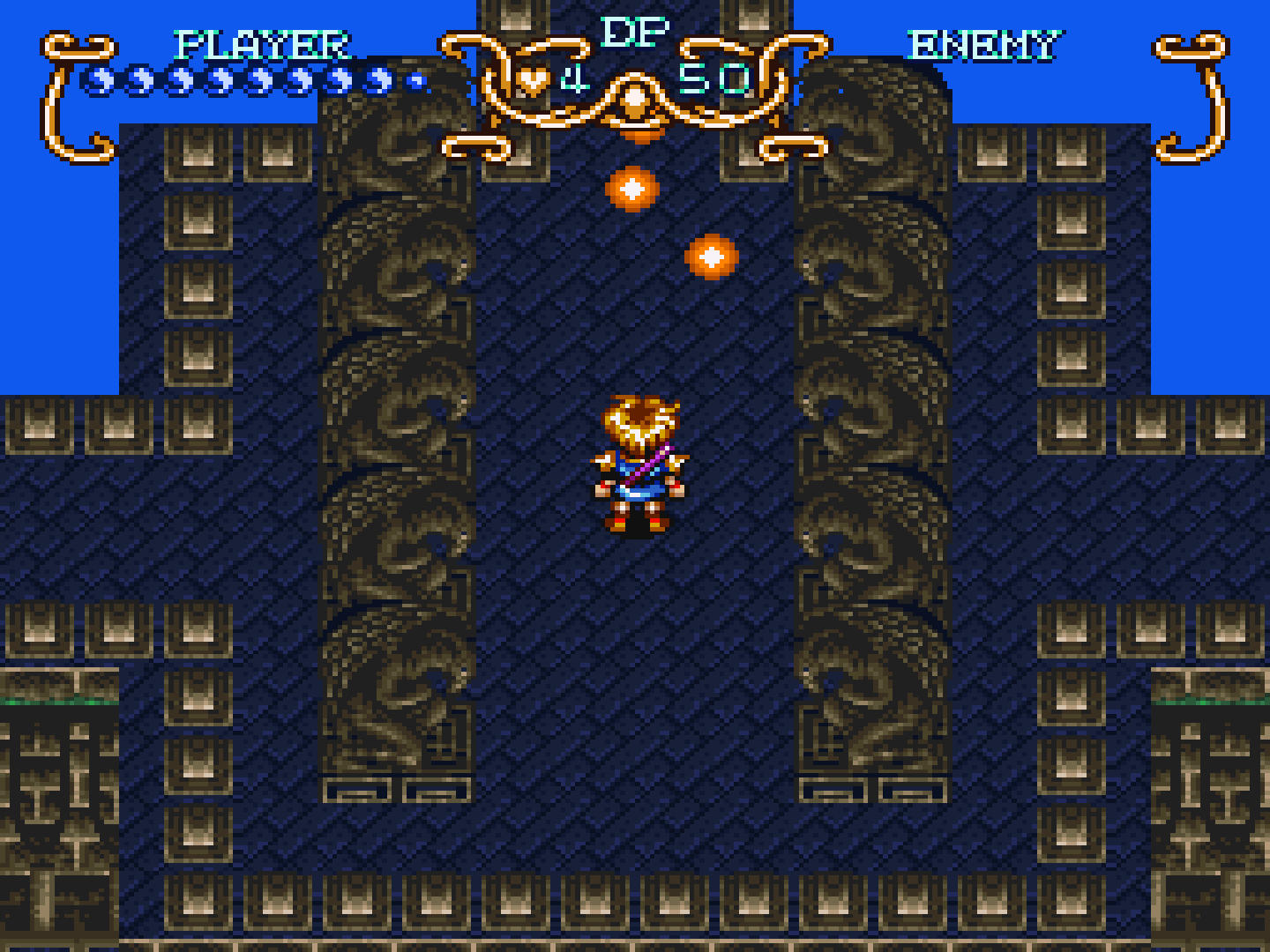 I go east, but that way is blocked by more raised pillars.

Clearing out the red colossi north also clears out the surrounding blocks nearby.

To the east, more enemies to take care of.

West, the last enemy for this area.

Meanwhile, I notice a tile. Maybe this tile lowers the pillars in the center here... 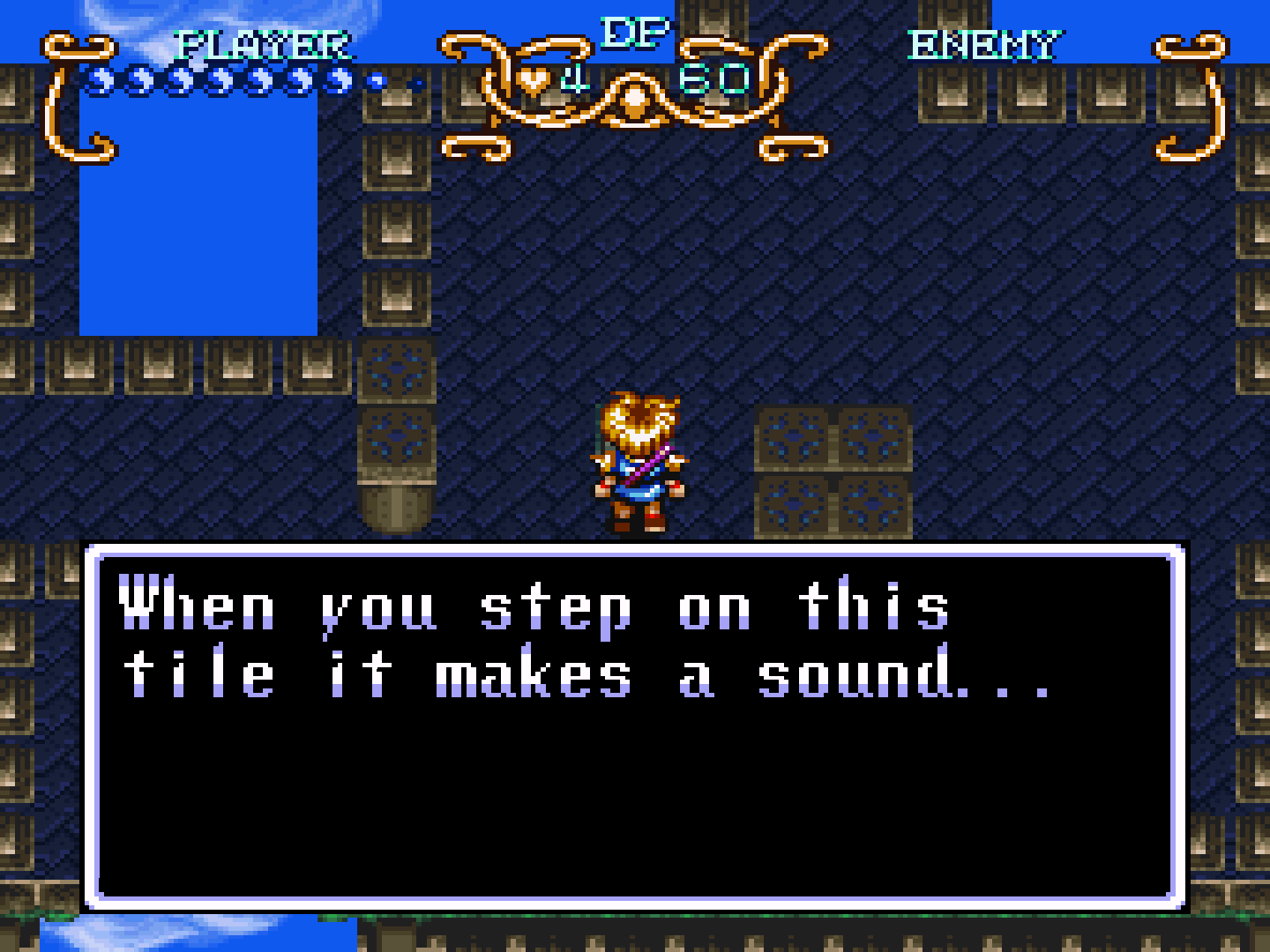 I head back to the sentinel statue, and take care of the sword.

I move the statue to the tile, raising the center pillars! 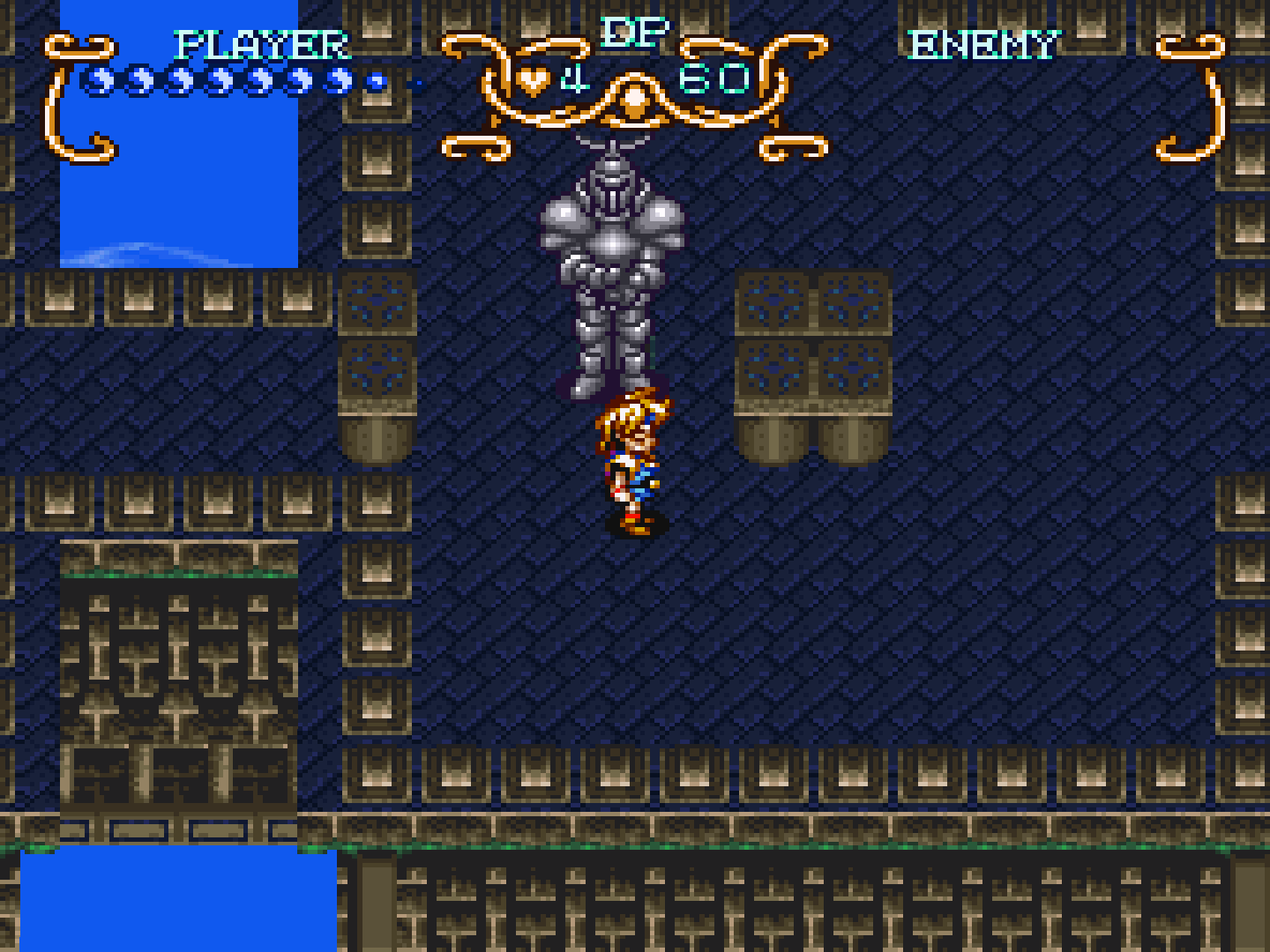 Back up to the surface, I use the large ramp...

In the underside of the garden, nothing new to be found either.

Heading back up, I pull the statues out of the way, and use the large ramp to reach the chest. 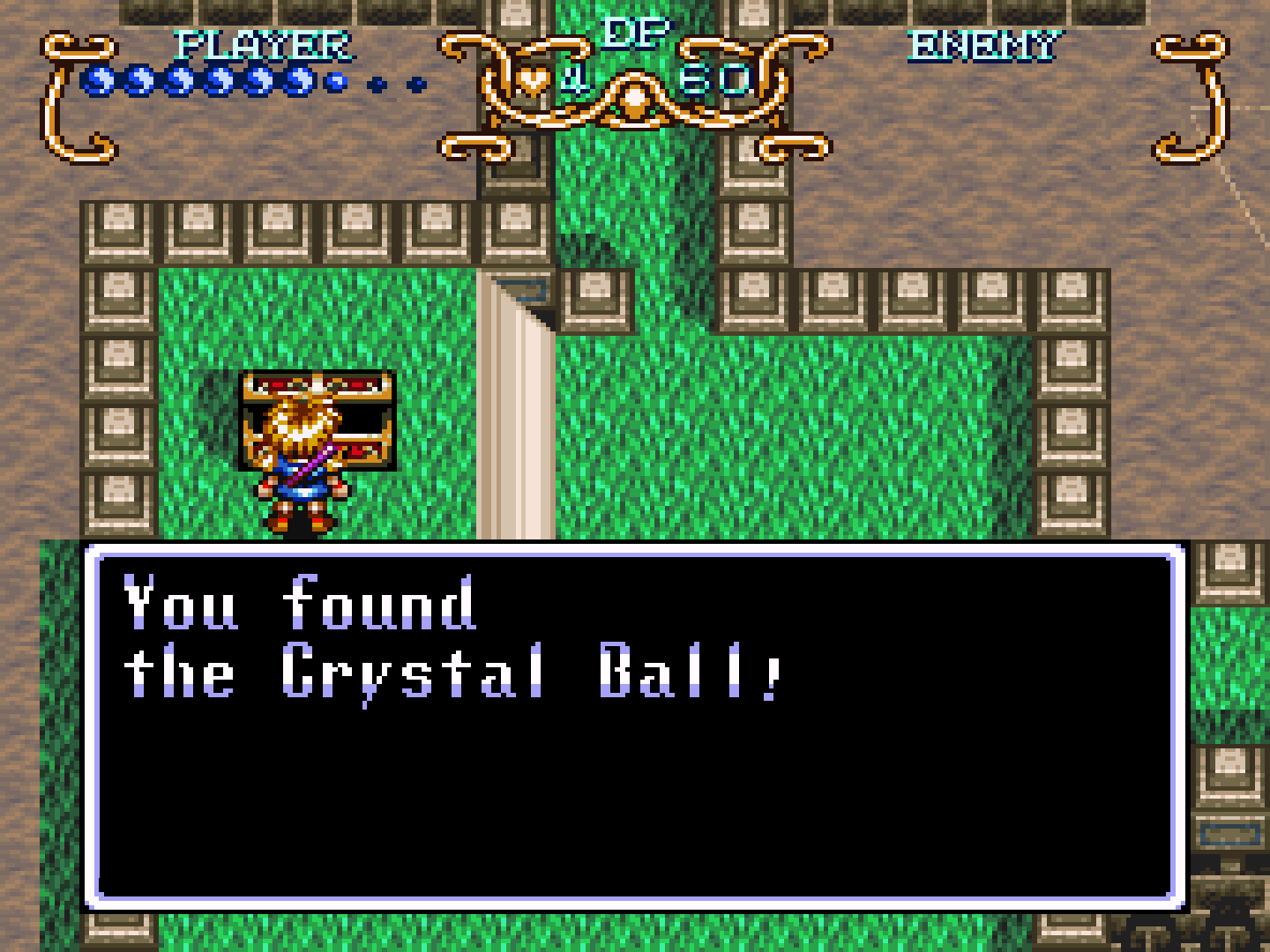 Crystal ball number three is ours!

The west, and last, area of this garden is our next stop!

Observing the area, I use another large ramp to jump to the next ledge! 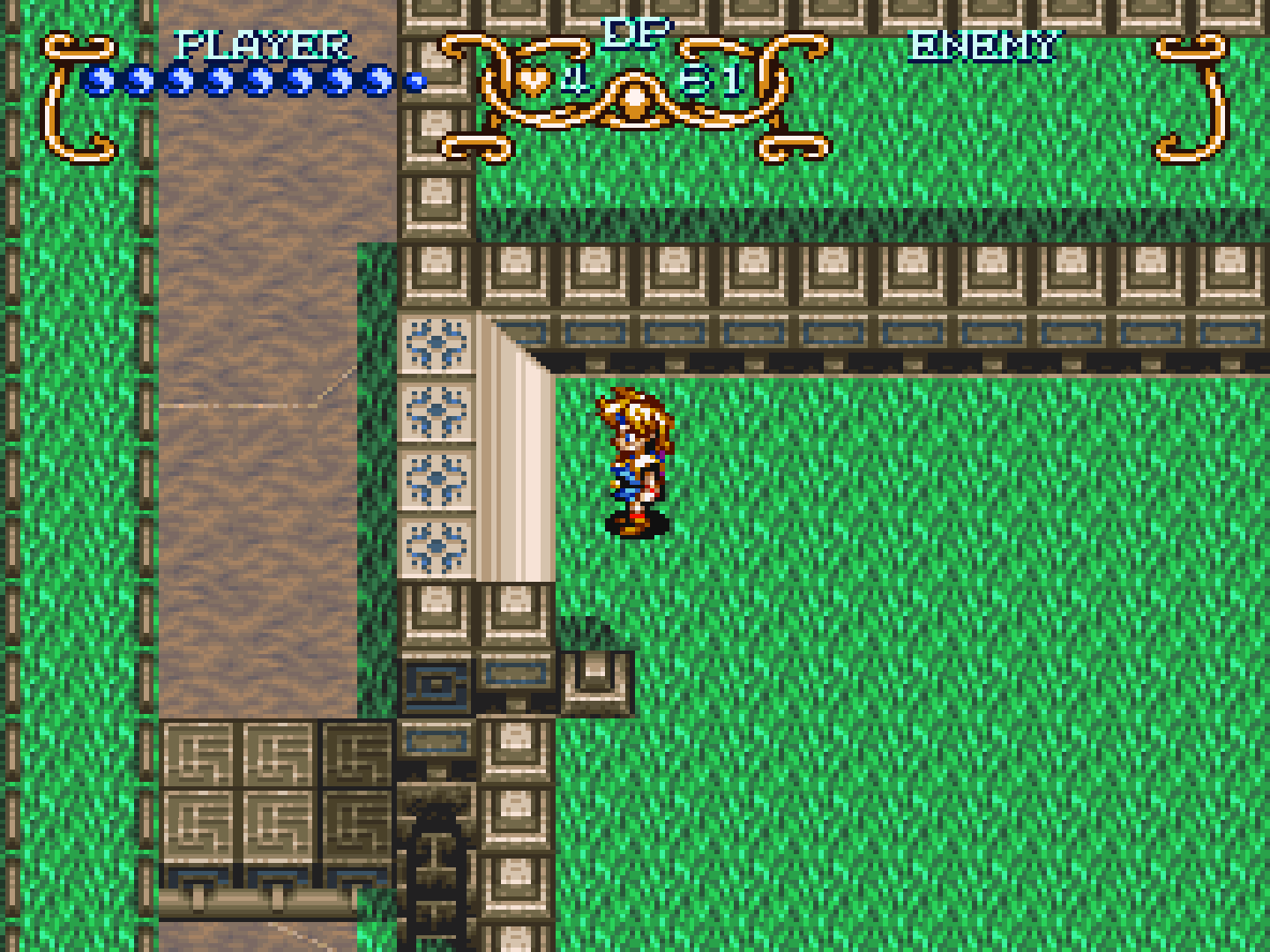 But the large ramp is not aligned with the other one!

Knowing what to do this time, I use the ramp and make it!

A trove of enemies await us in the west part of this area!

North, I see another ramp, and a gap going to the garden's underside.

I take the ramp back to the entrance of the area. 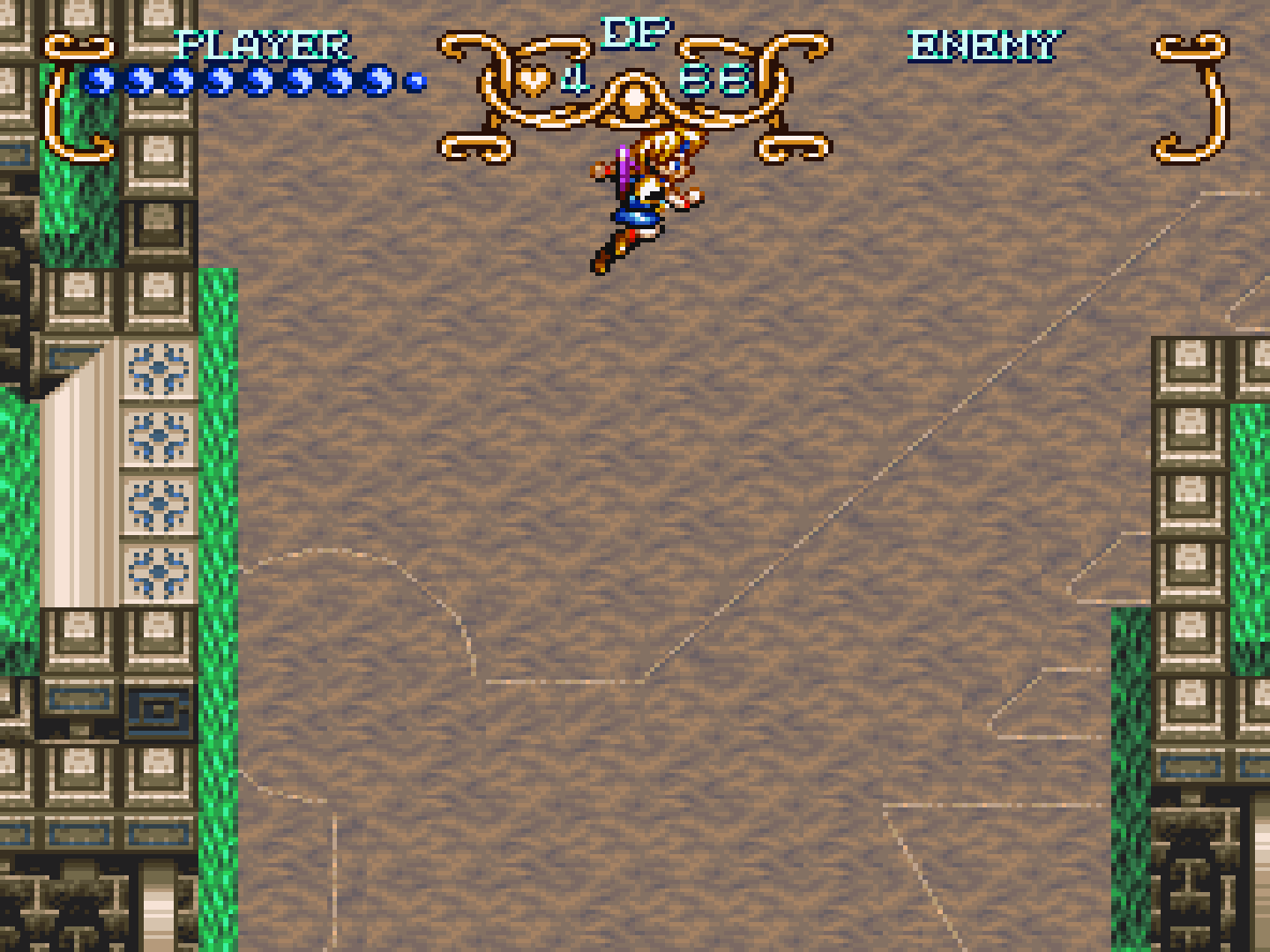 I actually make two leaps across!

Circling back, I land at the middle of the area, and travel south. I find another gap to the garden's underside!

There's plenty of metal ball worms and ruby colossi in this part of the garden! 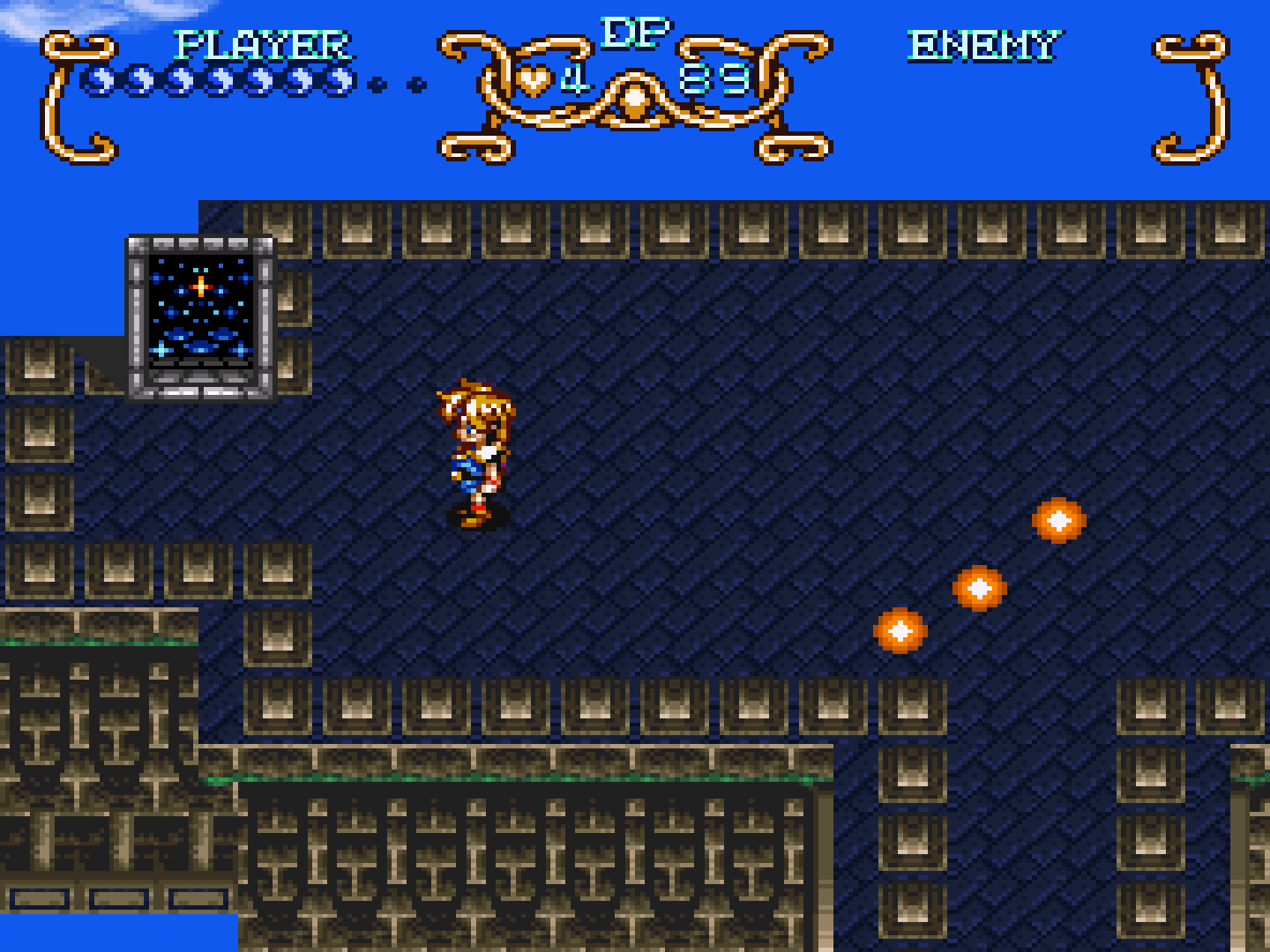 Nothing new here so far...

Back to wearing the Freedan coat again...

I make a super dash for the remaining enemies in this area.

Jumping down the gap, I return near the big ramp northwest.

Another gap later, I face more enemies and spot two more chests above us... 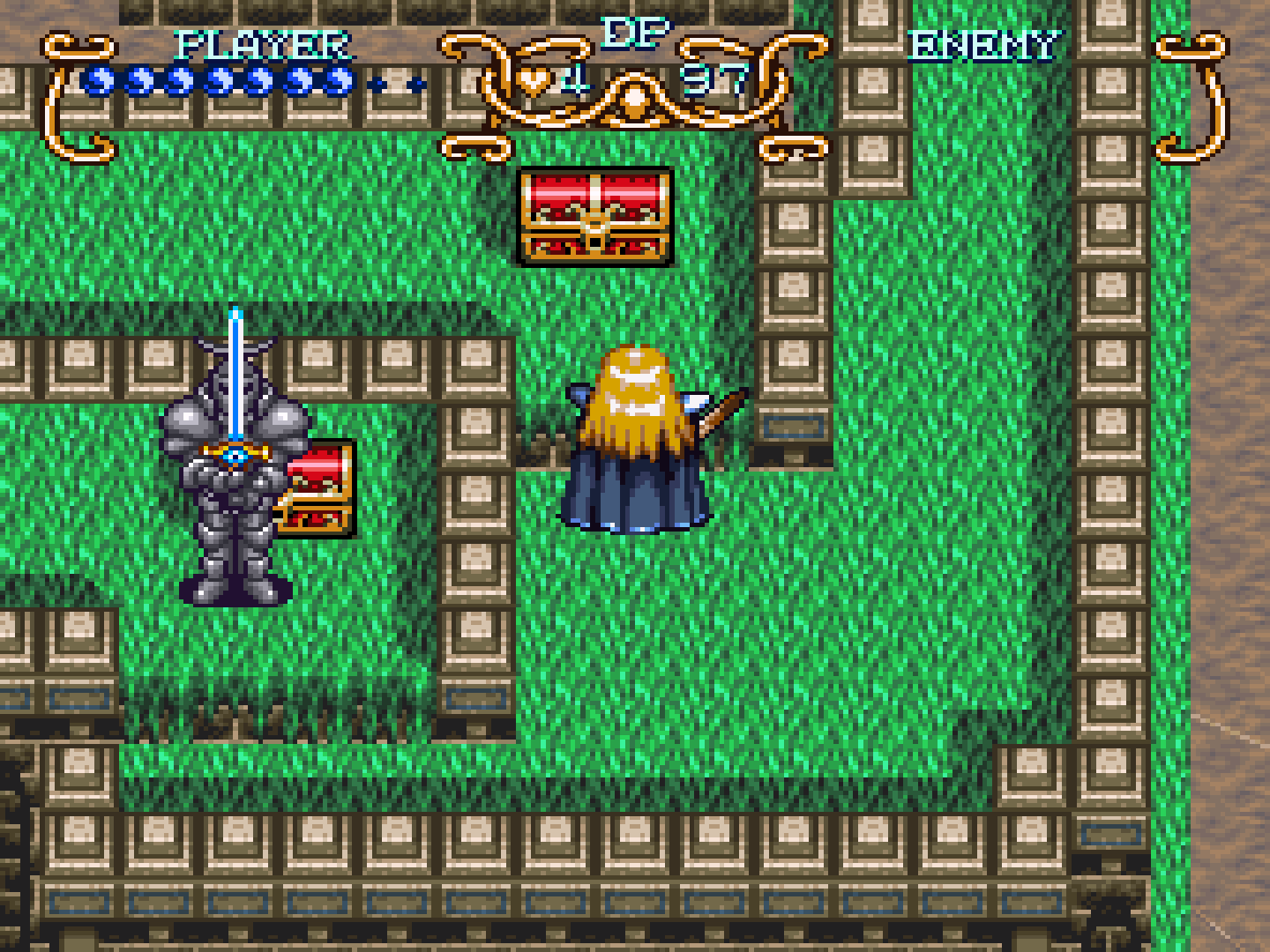 Back again at the garden's underside, I spot another sentinel statue, but I end up pulling the statue to a corner instead of the tile, making it stuck.

The second time's the charm! As the eagle statue disappears, I take care of the last enemy here.

Back to the surface, more enemies!

I wonder why the game devs put a sentinel statue here? 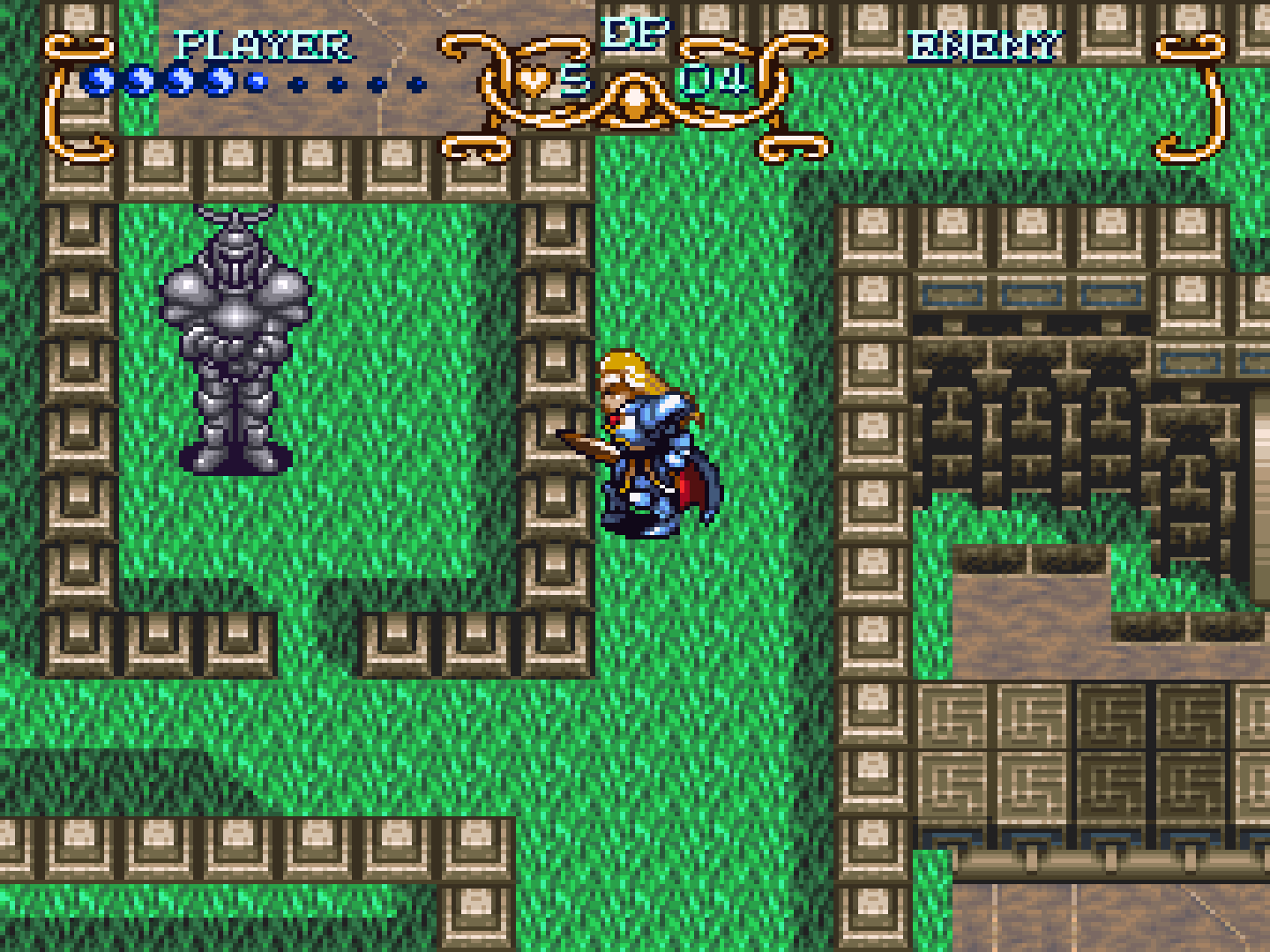 The area is clear of enemies, and Freedan's health is up to 19!

Two ramps here, but which one to take? 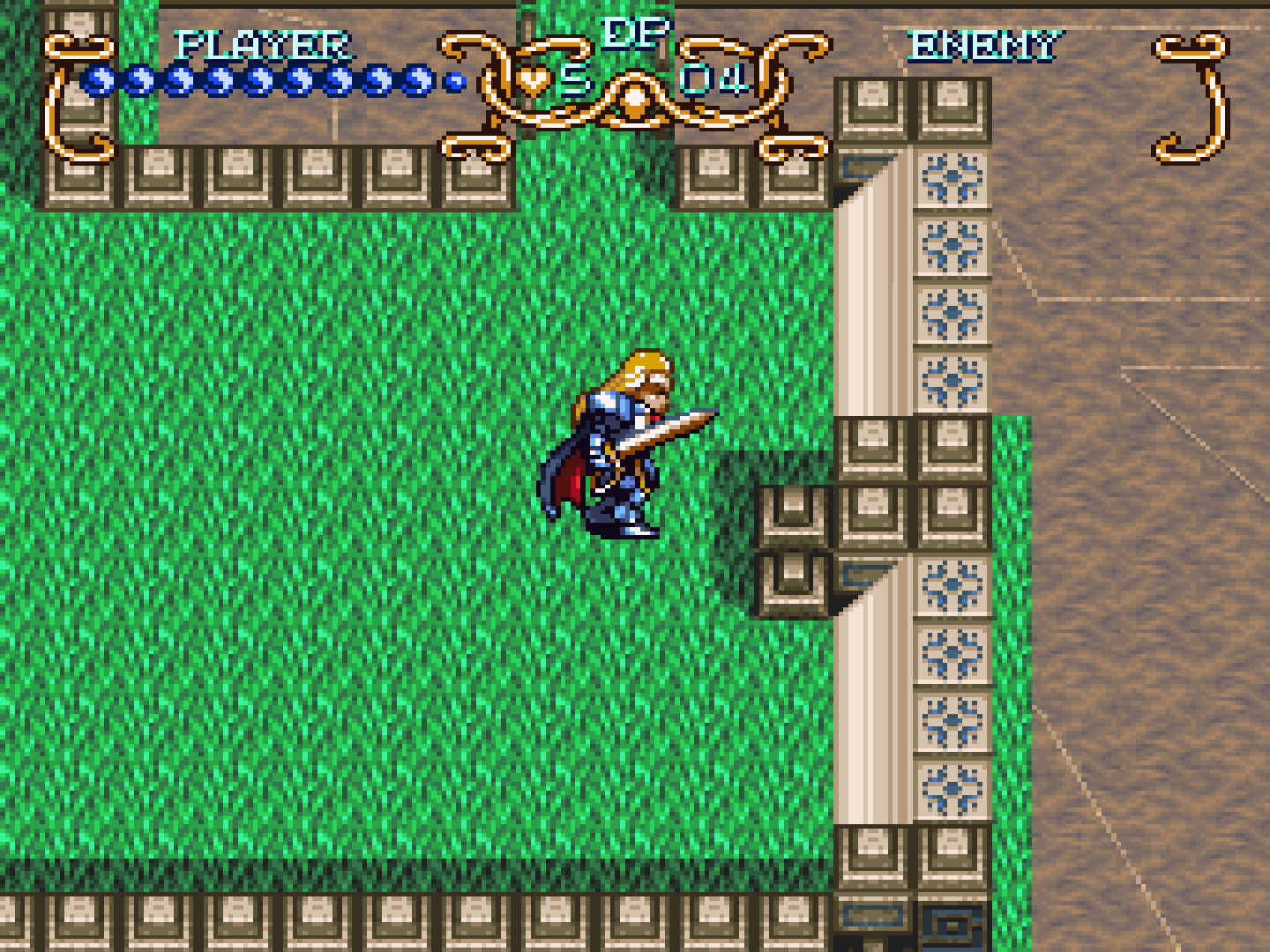 I decide on the north ramp, and open the contents of the chest....an herb!

Using the south ramp, and moving the sentinel aside, we finally get crystal ball number four!