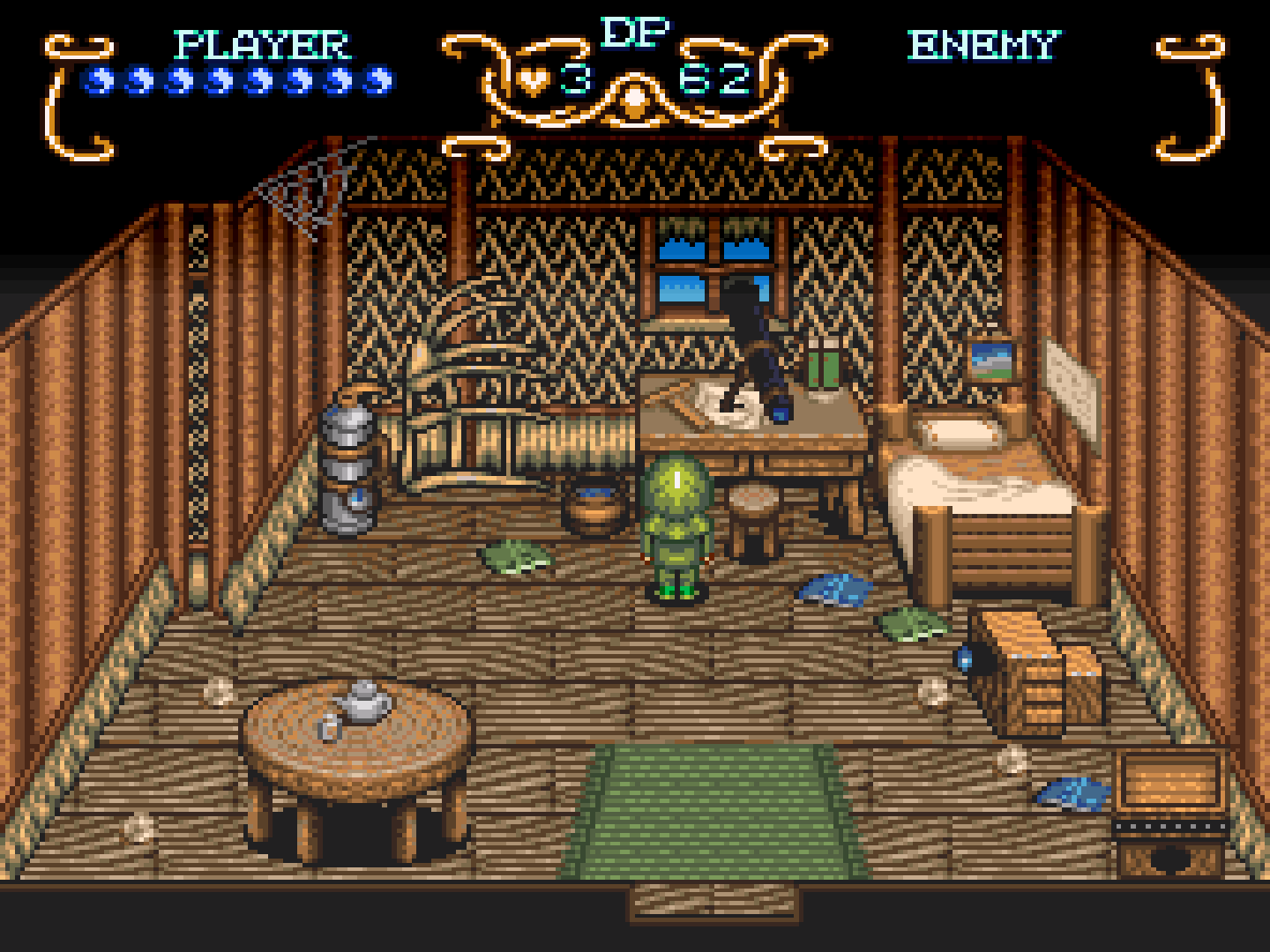 At Neil's cottage, a man cloaked in green has his back to his desk.

A pounding from the door. 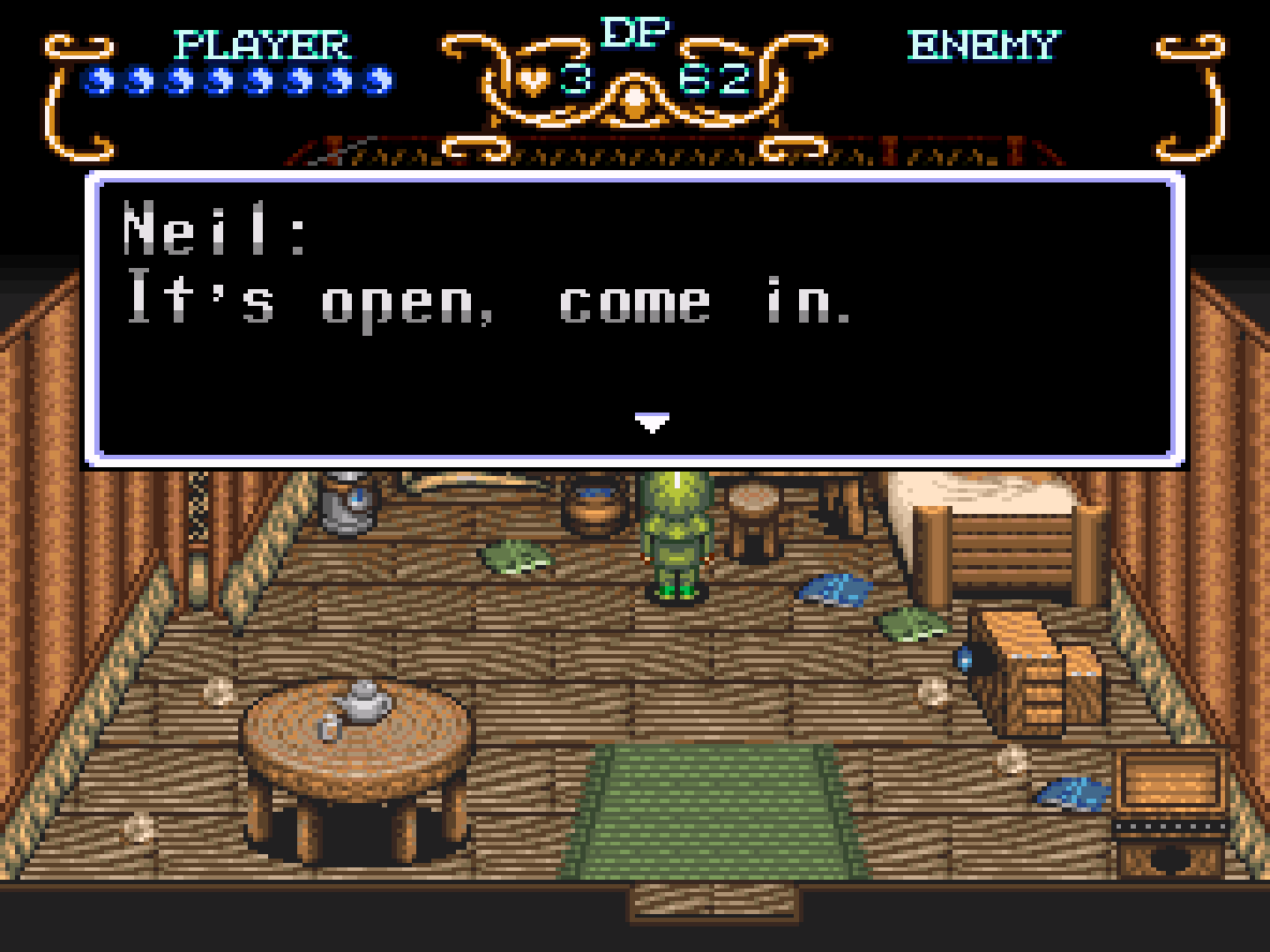 Aside: I wonder: does the color of the font in-game represent the vocal range of the character?

Will tells Neil who he is before entering.

Neil compliments Will on how much he's grown. 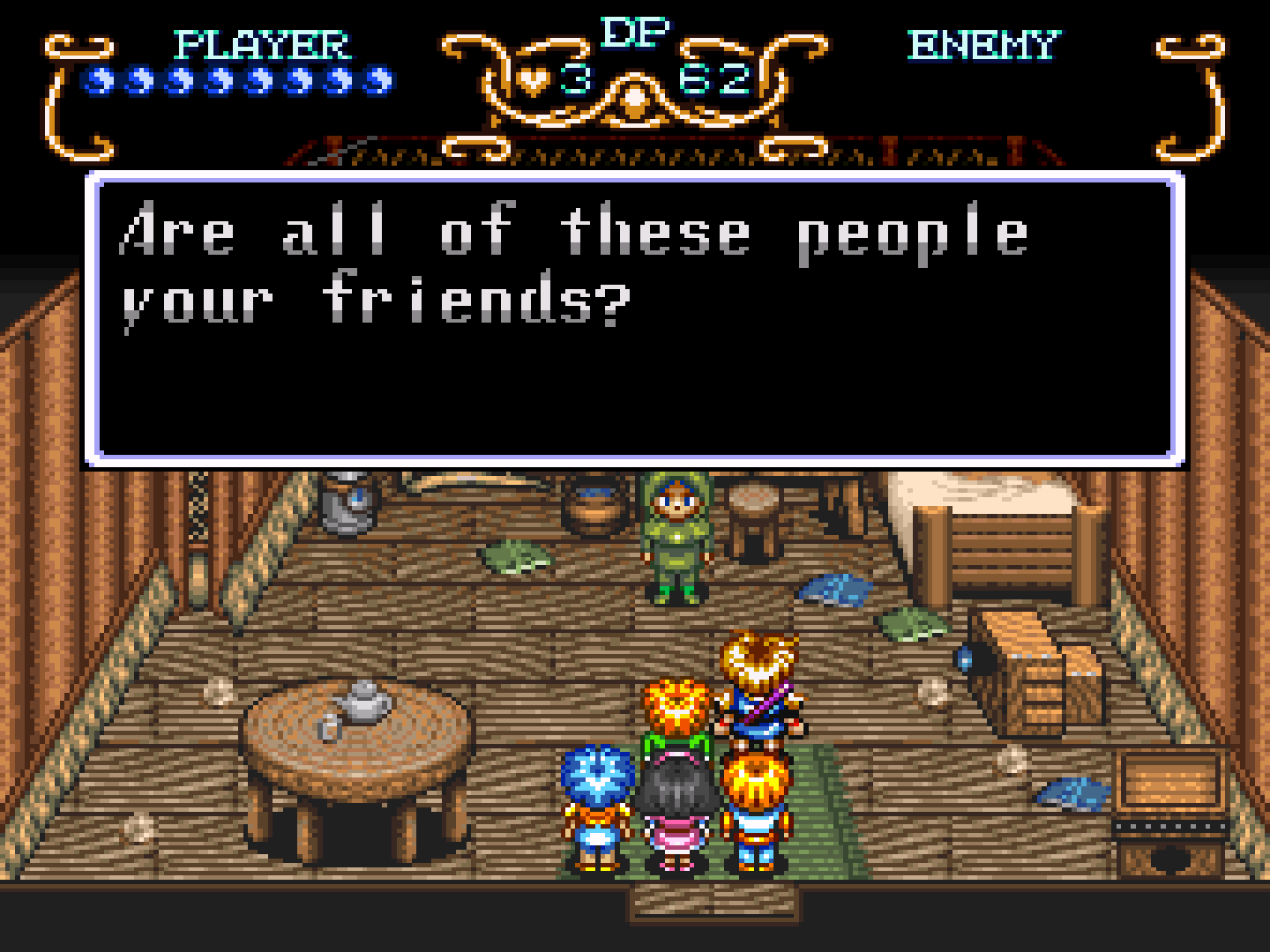 Lilly then tells her to be quiet, and compliments the "wonderful" smell in the room. The smell of progress and innovation! 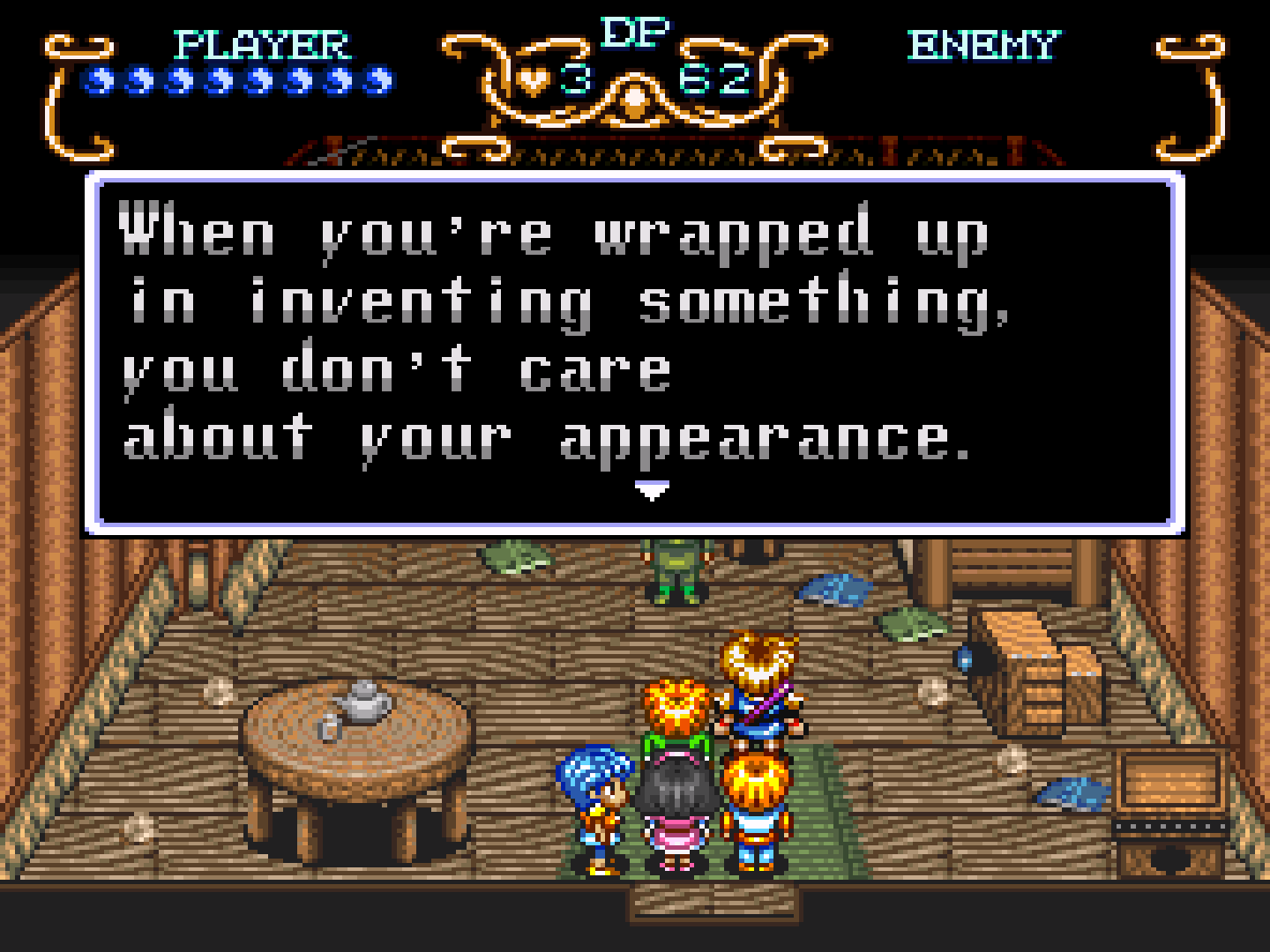 Neil: "I don't think the smell is bad. Not enough to hate me for it."

And Neil points out he's been wearing month-old socks...

Lance: "I've only had mine on for three weeks. I guess I lose!"

Neil welcomes us in.

Will's friends converge at the round table in the corner.

Erik wonders how Seth's reaction will be to all these inventions.

I try to talk to Lilly, but I can't reach her.

I examine the bulky device south of Neil's bed. 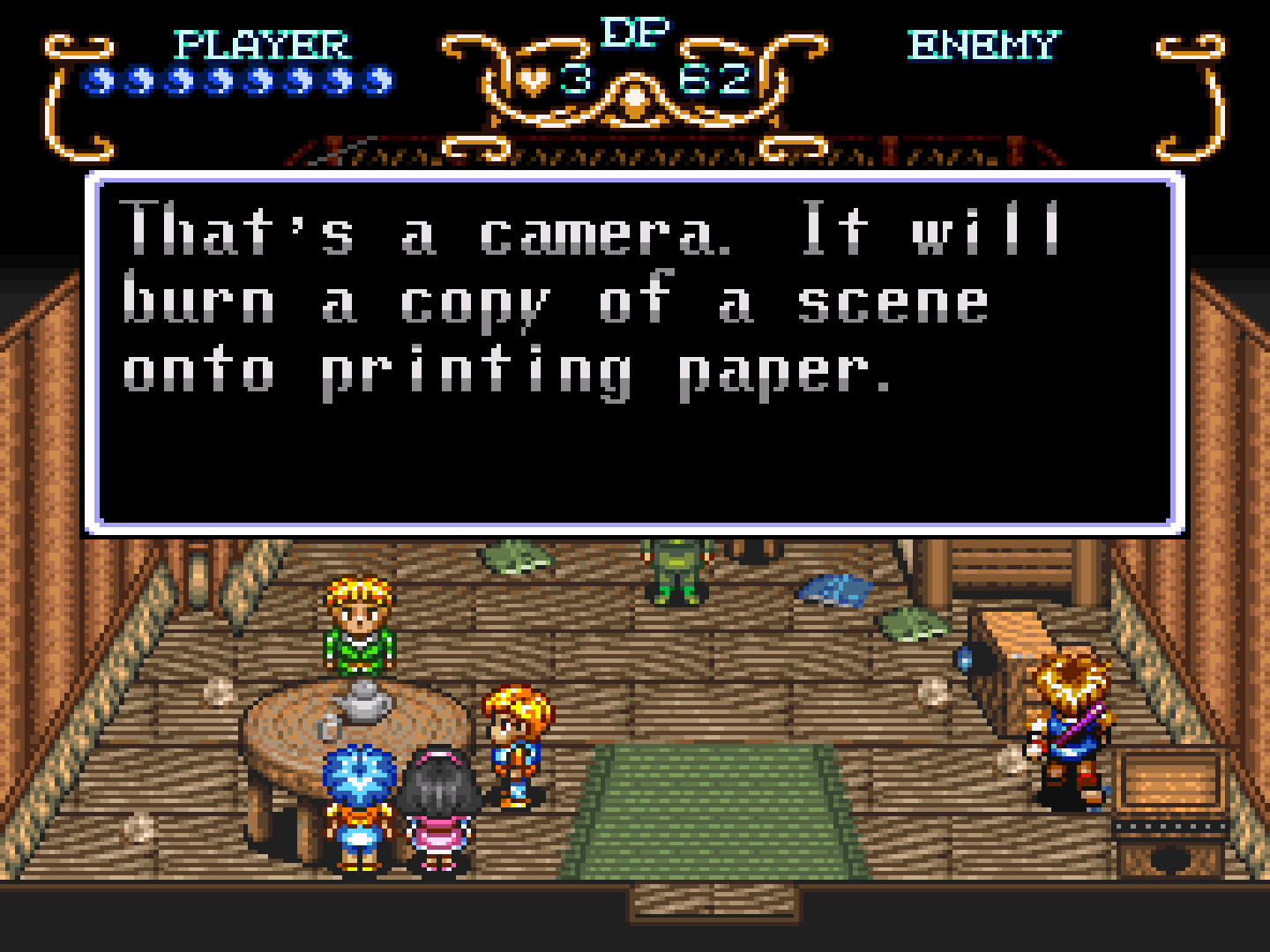 However, the camera takes half an hour to completely develop a photo!

Neil: "Scenery doesn't move, but to photograph a person means they can't move for 30 minutes. When I used it, the eyes turned bright red like a rabbit's." The red eye problem, I get what he means.

I go to the northwest, where we see an air tank. 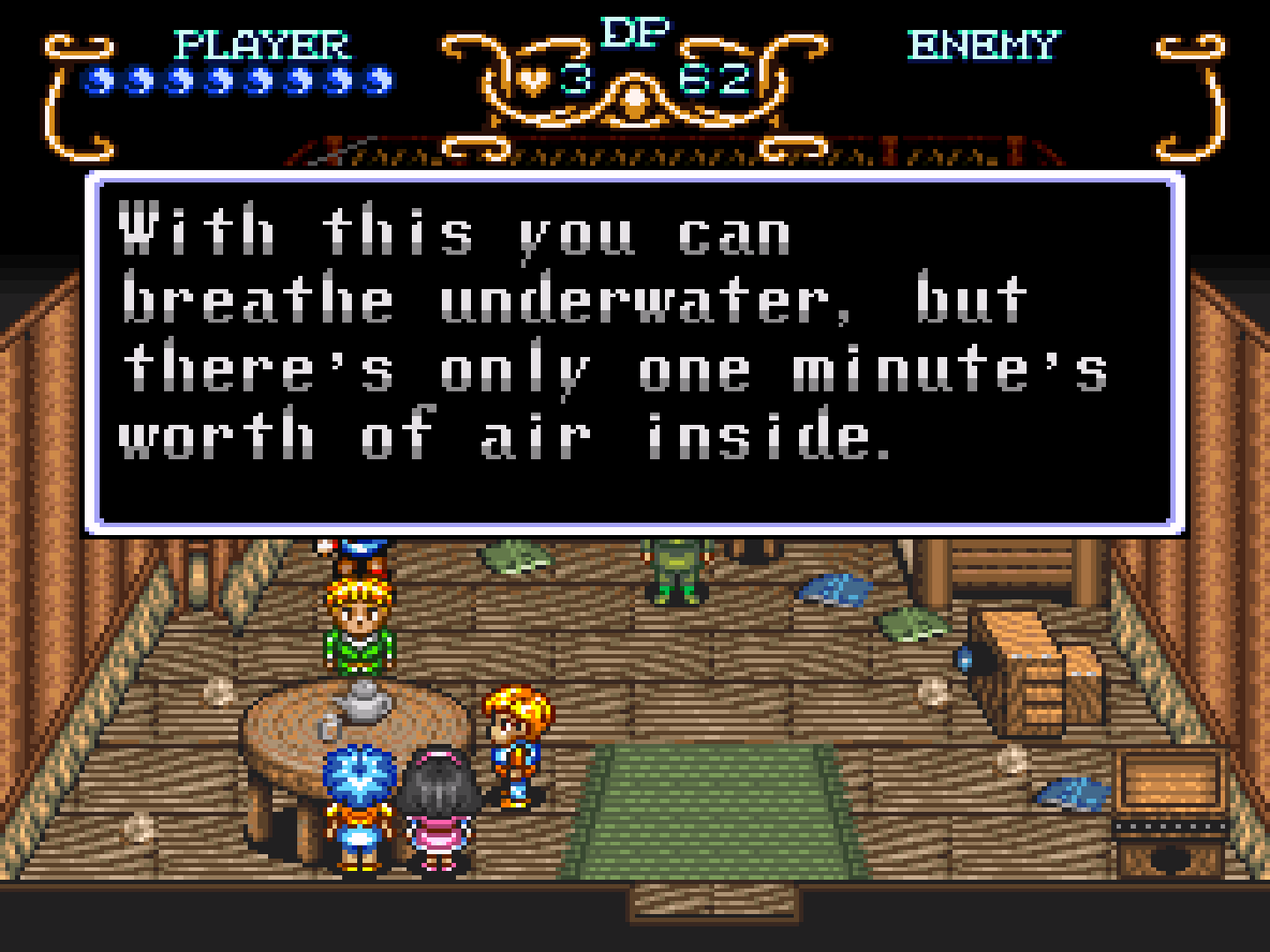 Neil has not figured out how to compress the air in the tank, tho.

Next to it are claws, or wings for an airplane.

Neil: "It's part of a machine that will fulfill man's dream of flying in the air like a bird. The body's too big, and you need a runway to take off, so it's hidden in the desert."

After observing the telescope, we talk to Neil.

Will explains everything in his quest that's happened so far.

Neil finds Will's quest "interesting," as he's also interested in ruins. He gives more advice to us on where to find those ruins. 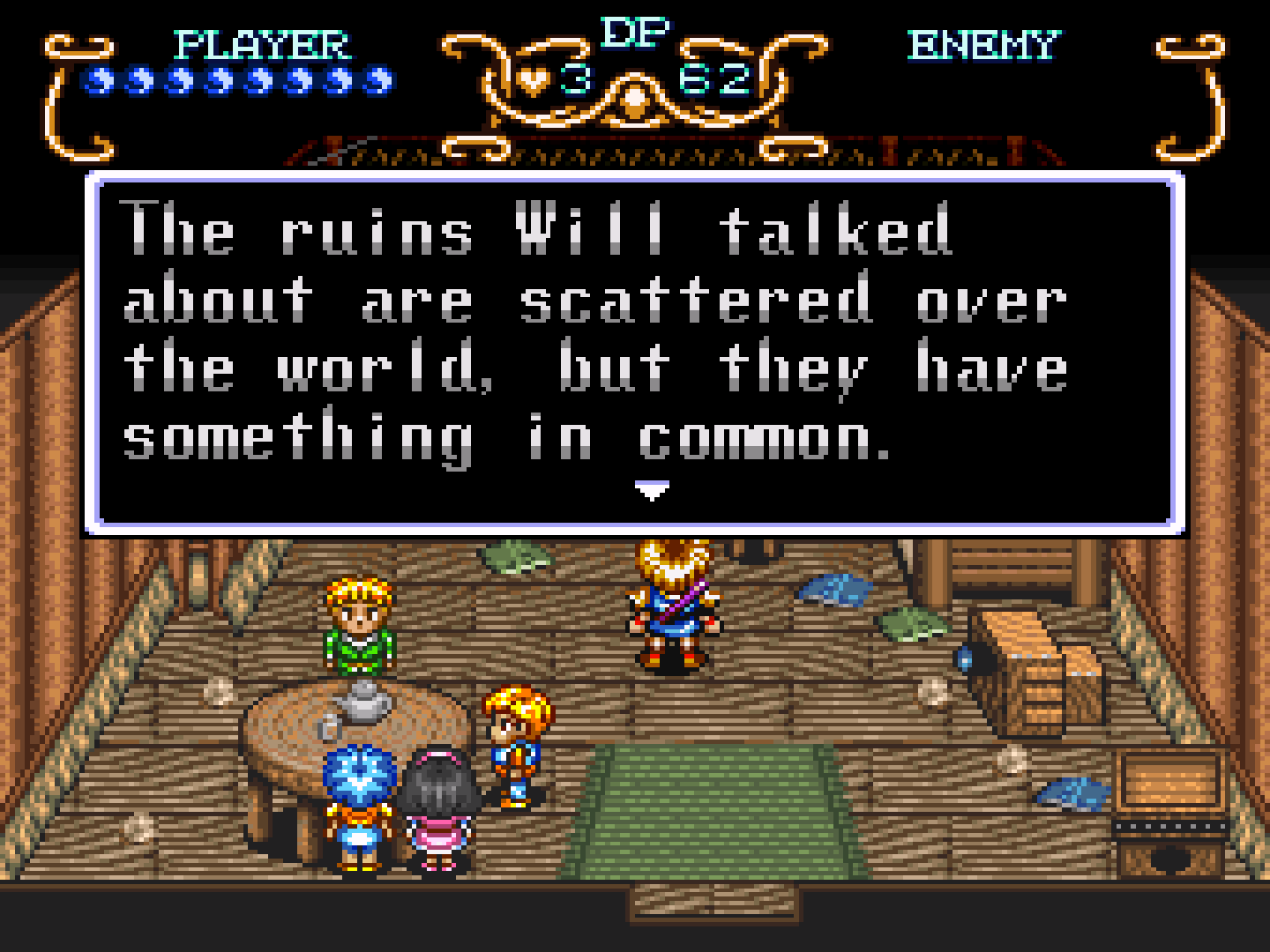 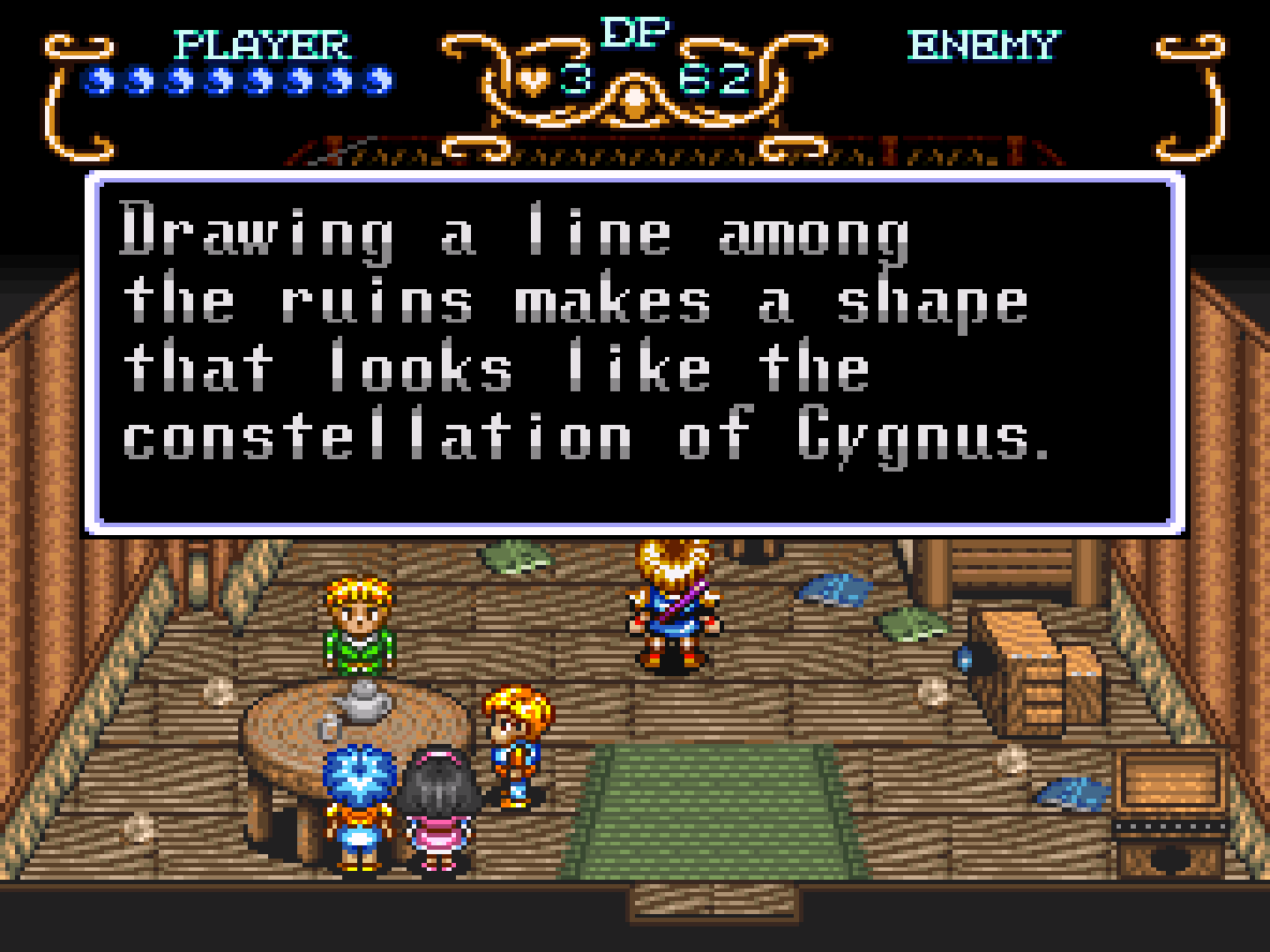 So the temples, when connected like dots, make the constellation of Cygnus? 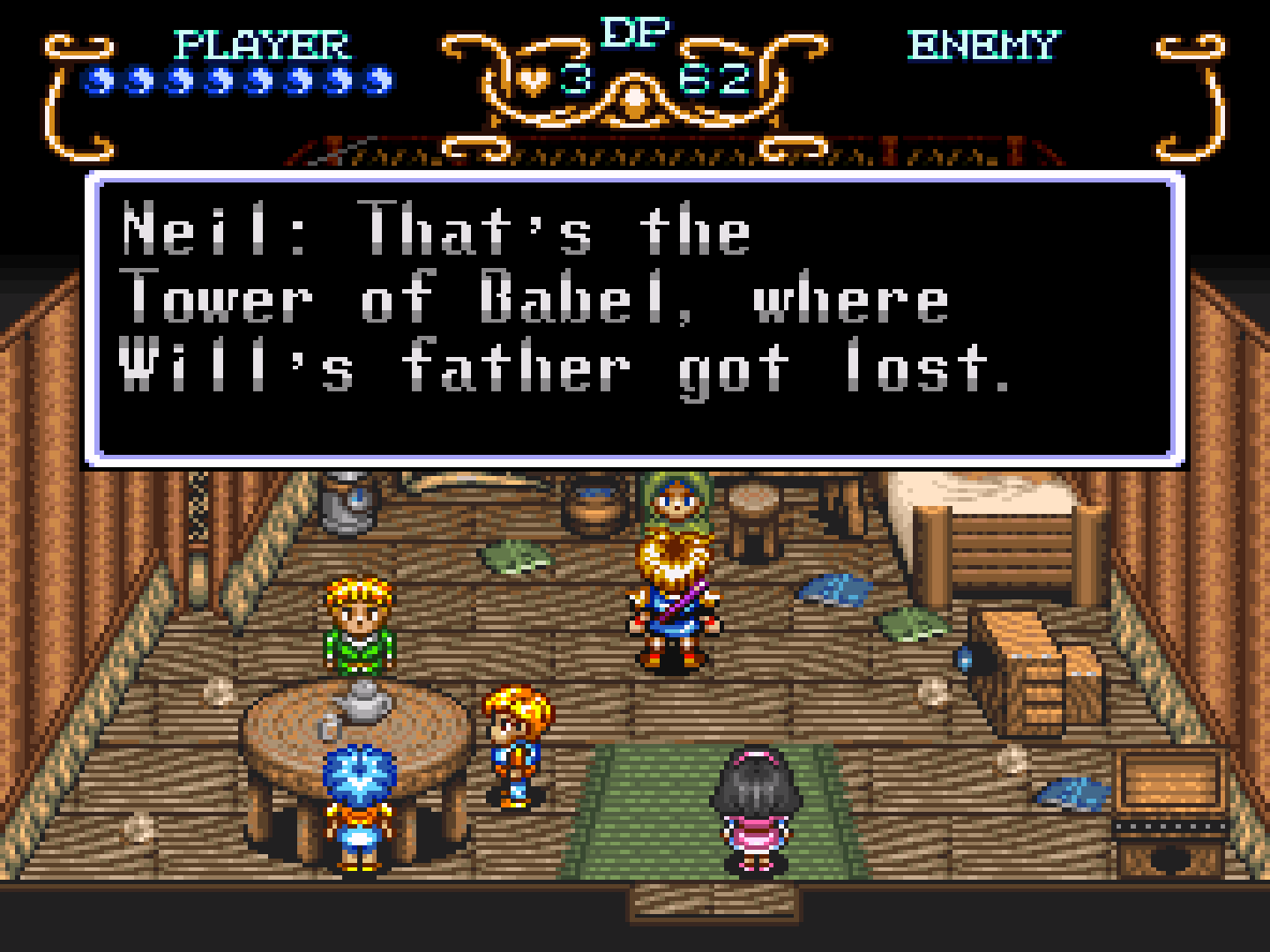 Neil: "It's in the middle of the ground painting of the big white bird."

Lilly points out a "new red star below" Cygnus.

Neil: "The red star in Cygnus, Will's interest in ruins. Different elements are bound together organically..." 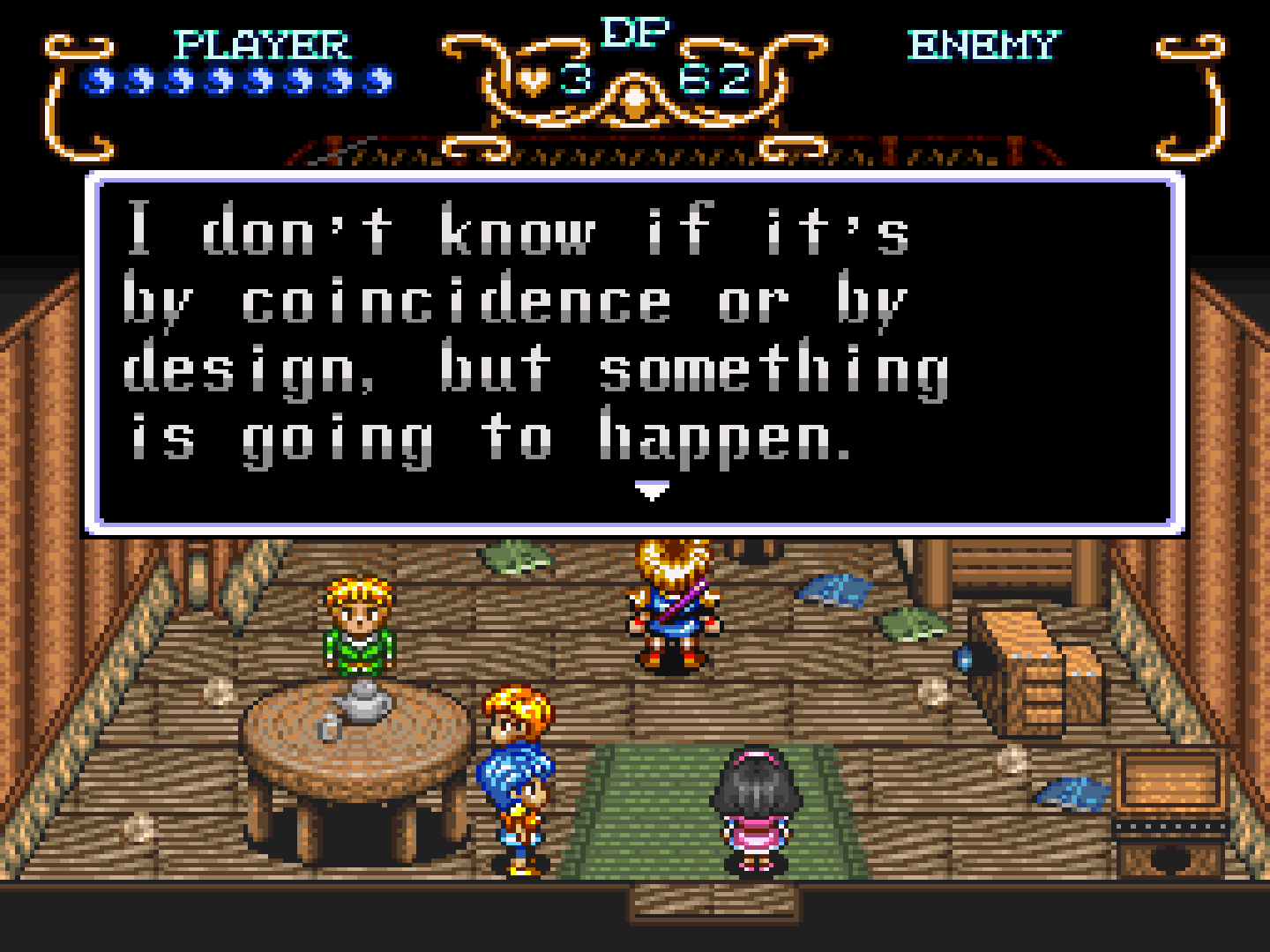 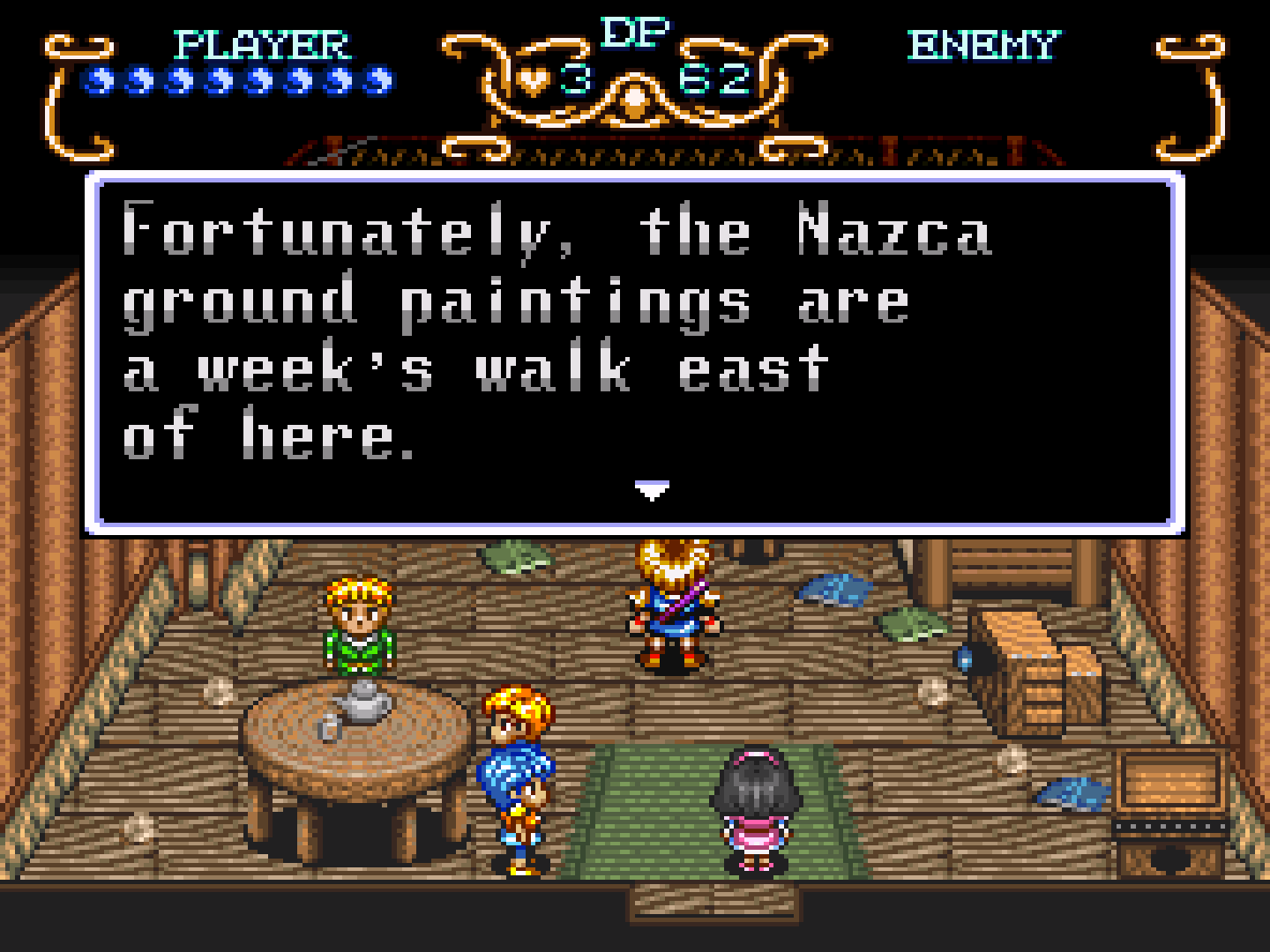 So our next stop is to look at the Nazca painting. I try to say no, but Neil gives us a but-thou-must answer, since he really wants to take a look at those ruins.

Lance and the rest of the gang join along!

Off to the Nazca Desert we go! 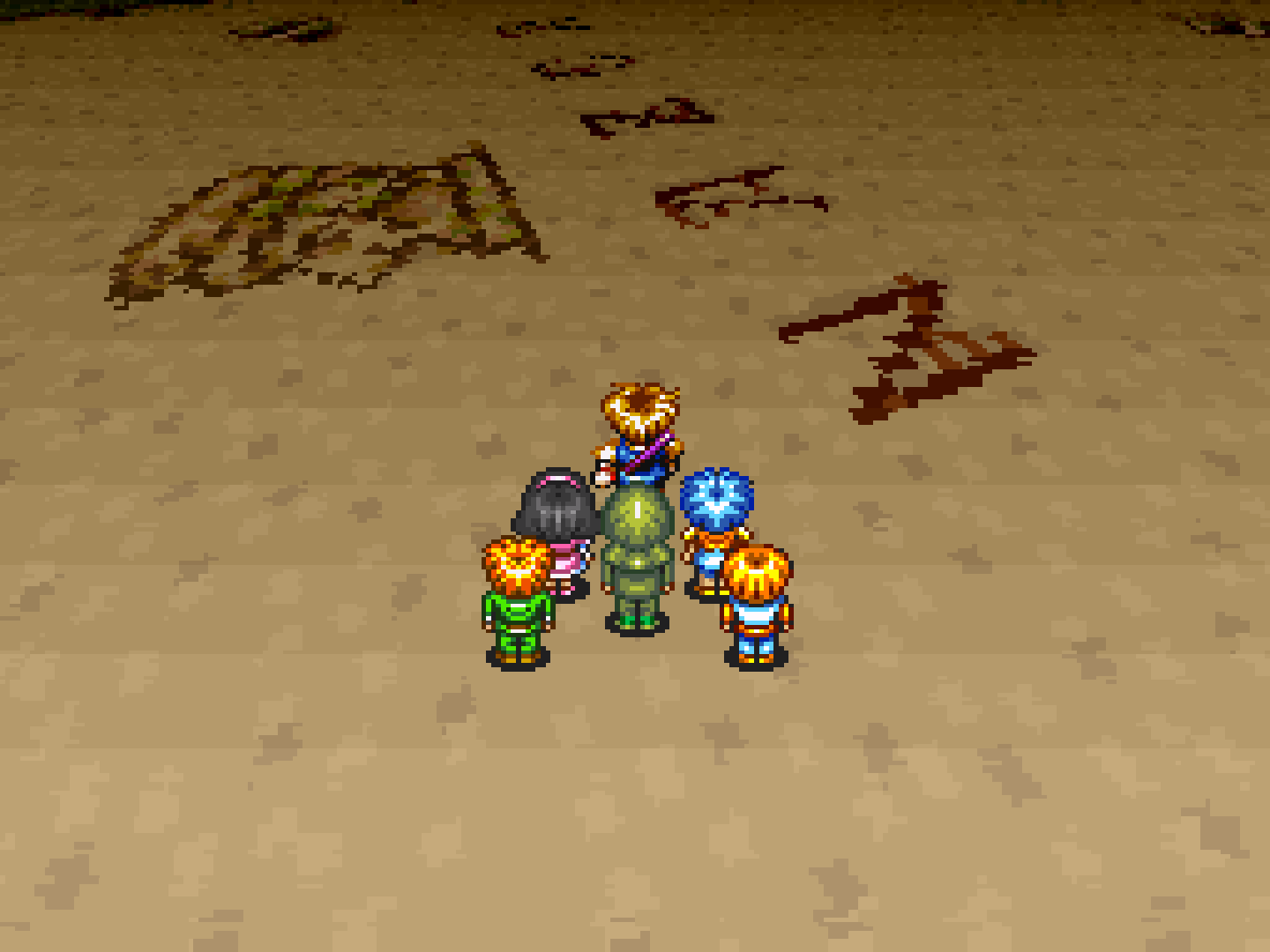