I leave Dark Space and double back to transform into Freedan.

The transformations more quicker than usual this time...

I take care of the rest of the monsters in this area and continue!

Freedan's more taller than the platforms on screen. Probably it's to indicate he's a legendary being of sorts, I think?

A one-way trip down the cliffs we go! 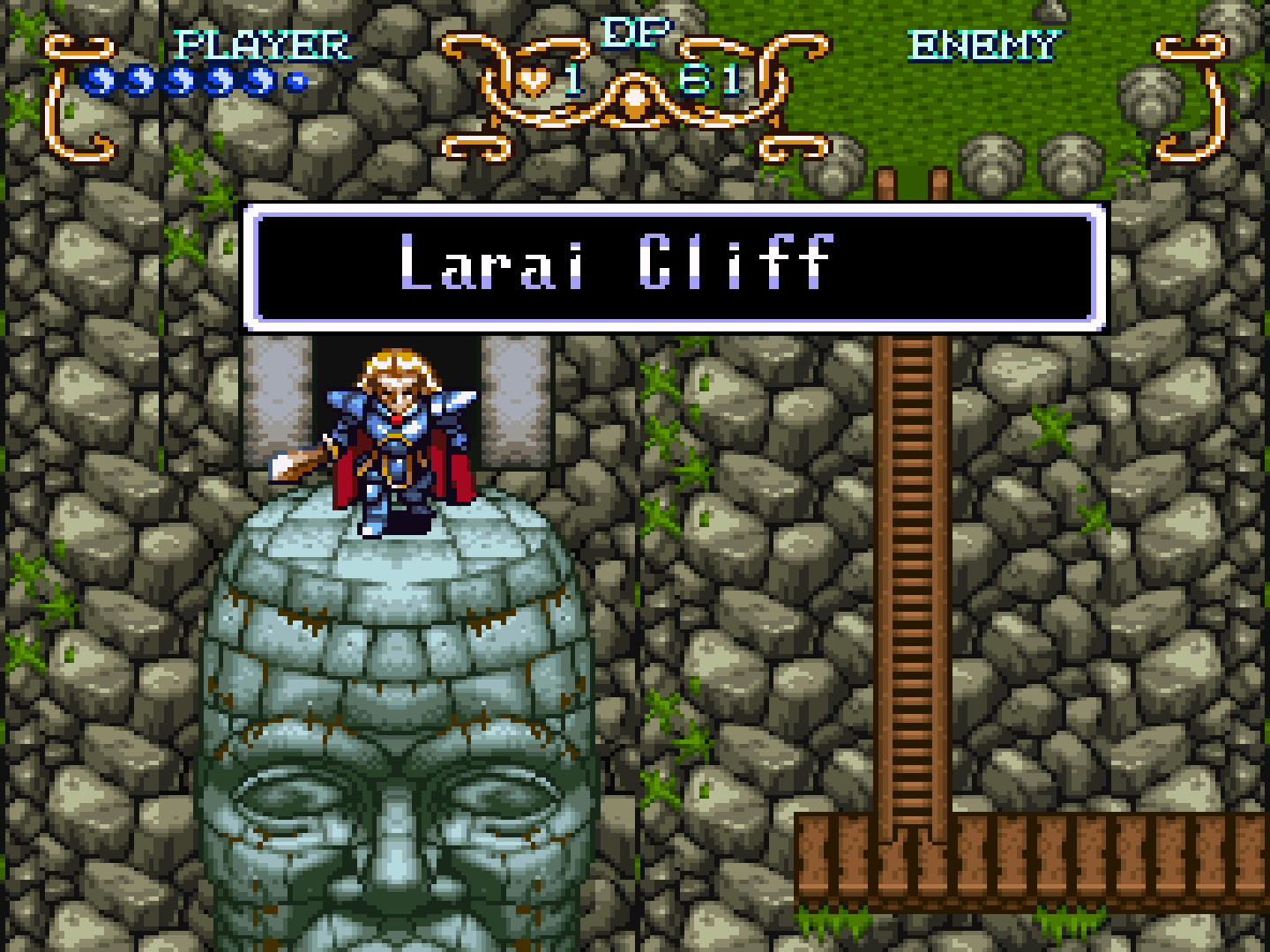 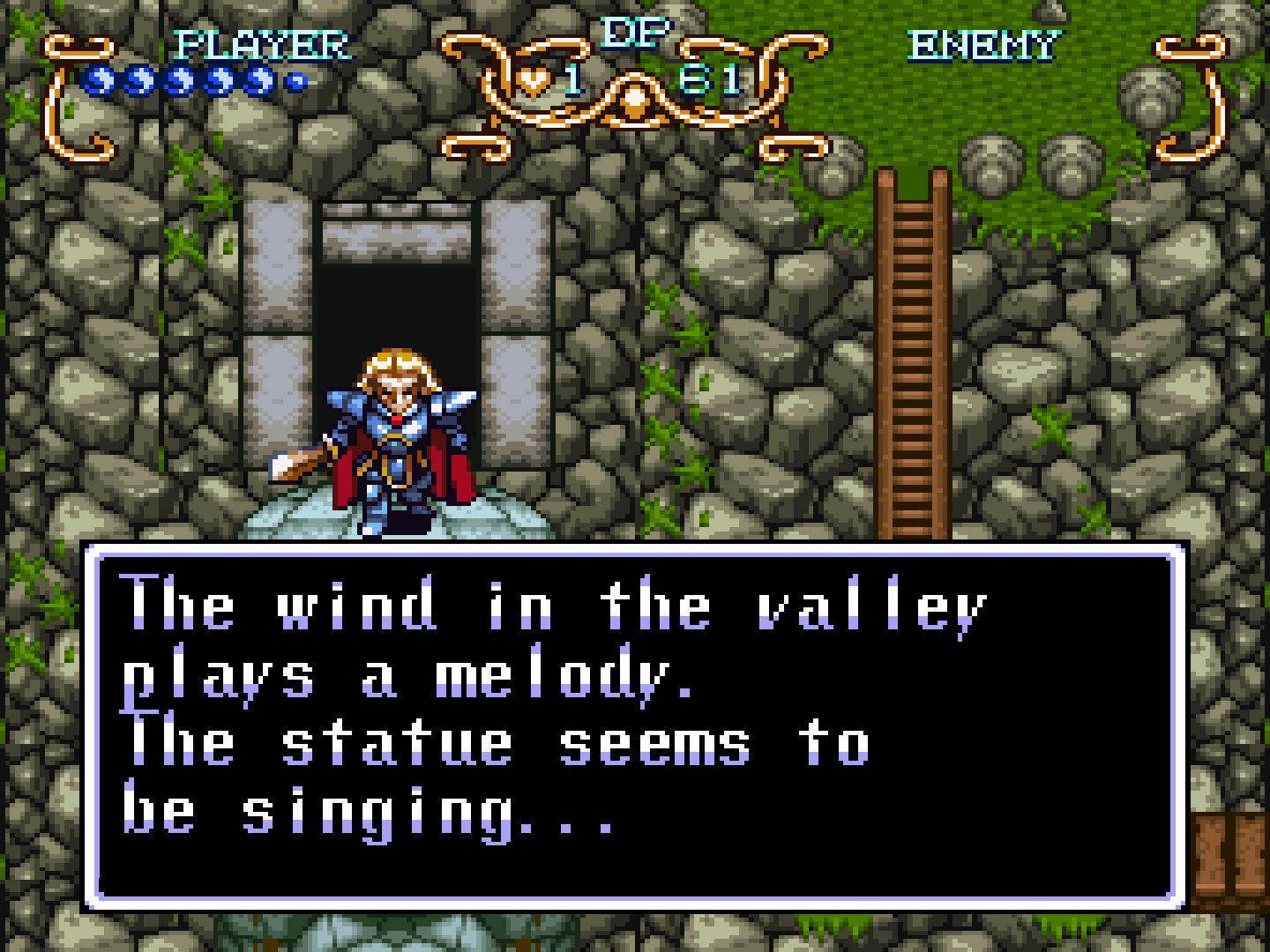 The statue beneath us is singing, huh?

We hear the melody.

And we've learned another tune: the Melody of the Wind! This probably might be a useful tune to open the Incan Ruins!

Still as Freedan, I double back to one of the chambers and take care of the floating head on the pedestal that Will couldn't reach. Defeating the head opened a path somewhere...

No, it revealed a ramp! Looks like we can now reach the other side of the chamber!

Whoo, what a rush!

On the other side, where I take care of two ever-evasive slimes!

Now to finish off the rest of the enemies in this area...

When I press L or R, Freedan can also attract gems to him as well!

Downstairs to face off against more statues...

Not counting the statue we defeated, there's twenty more enemies in this room!? 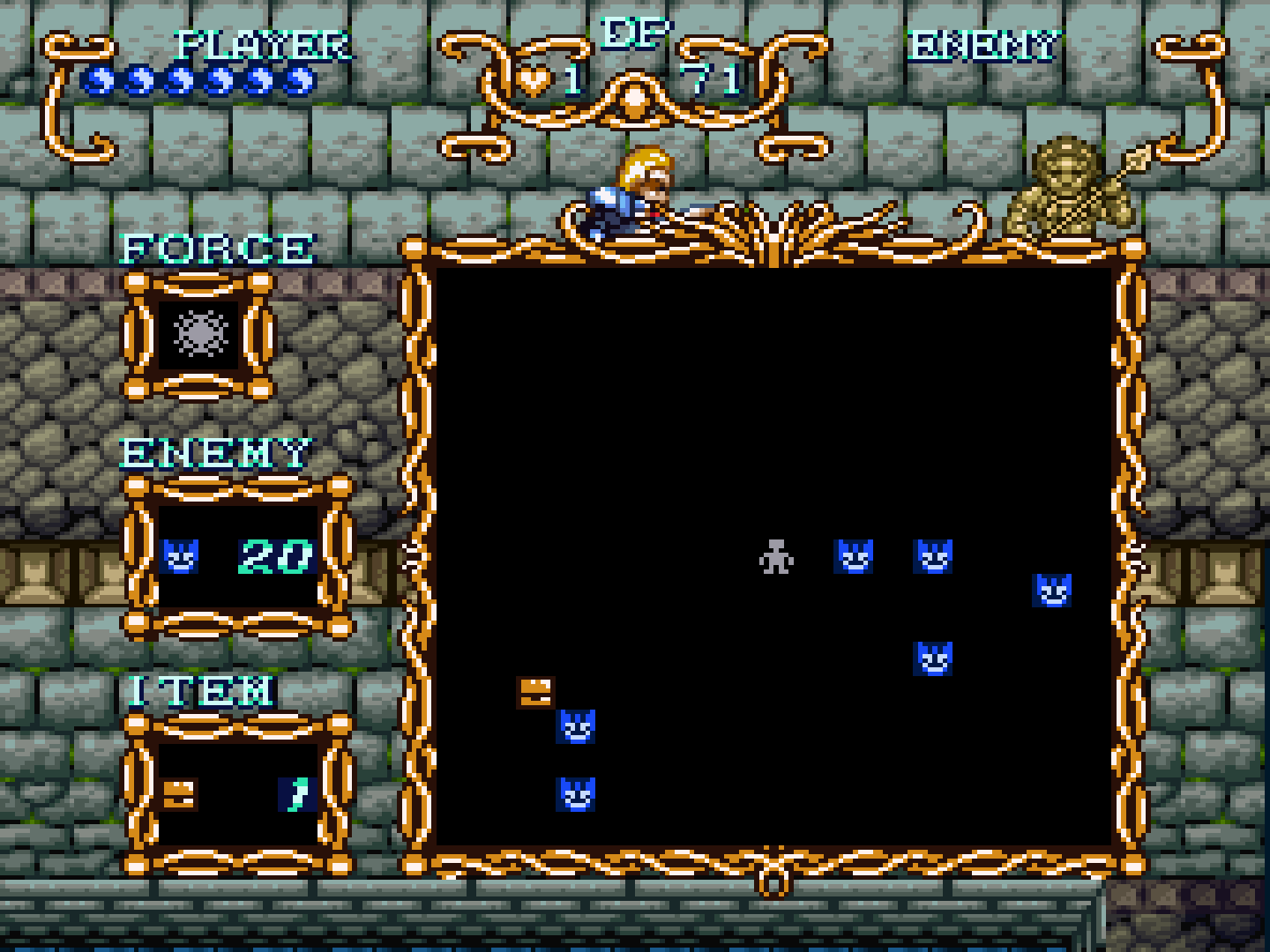 More enemies to take care of, and we leap across the moat using the ramps!

Up the stairs, where slimes and floting heads await! We make it to a chest guarded by another statue, and take the contents!

More statues downstairs to face, and our health is low...there goes another herb!

The last four are more statues, and after pressing the button at the end of the hall, they come to life!

We make it to the bottom of the cliff, where we take care of the last troops here again... 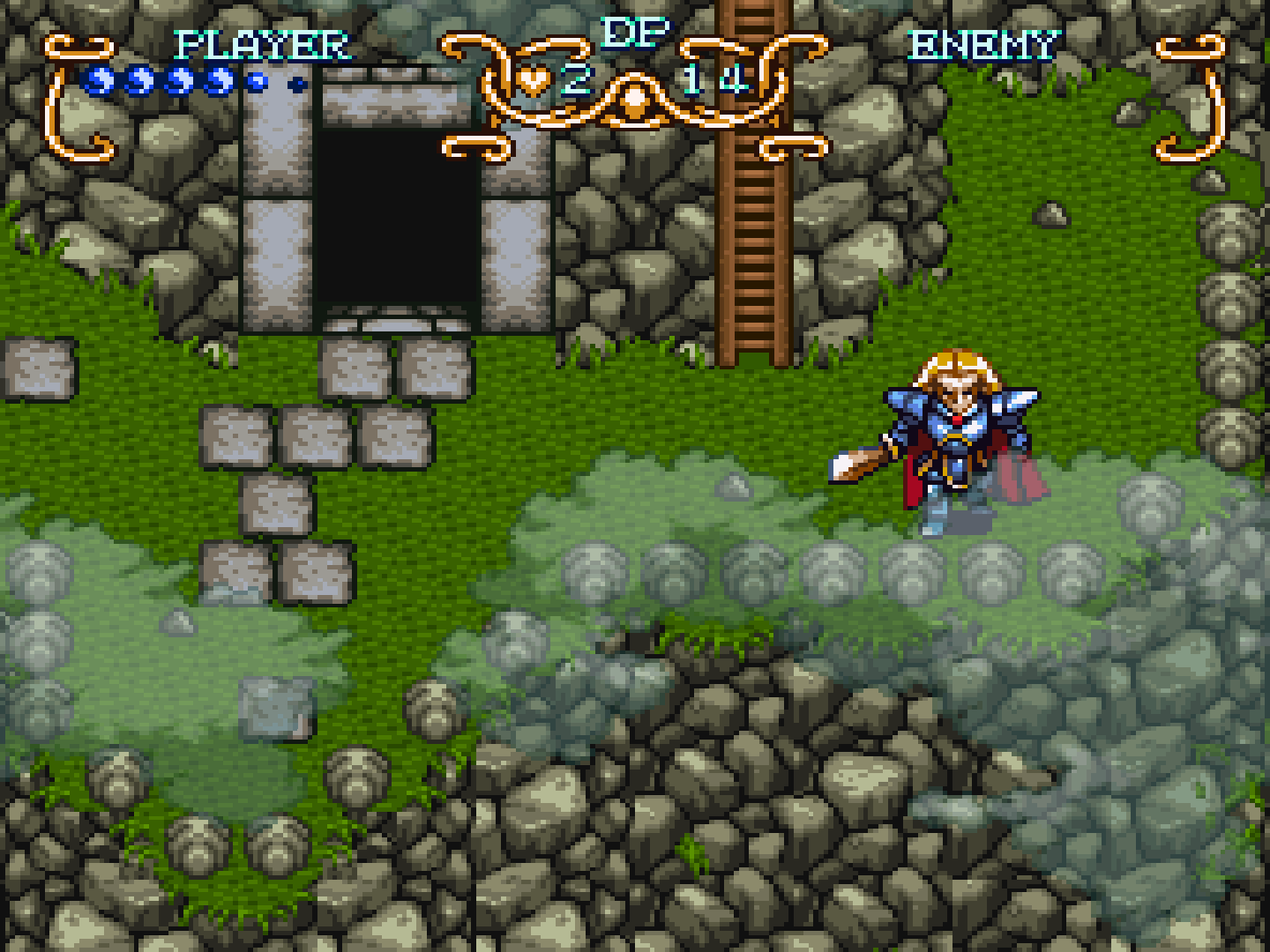 ...and we've opened up a shortcut for a quick getaway from here.

Inside the next room of the ruin now...

My goodness, when will we reach the end? 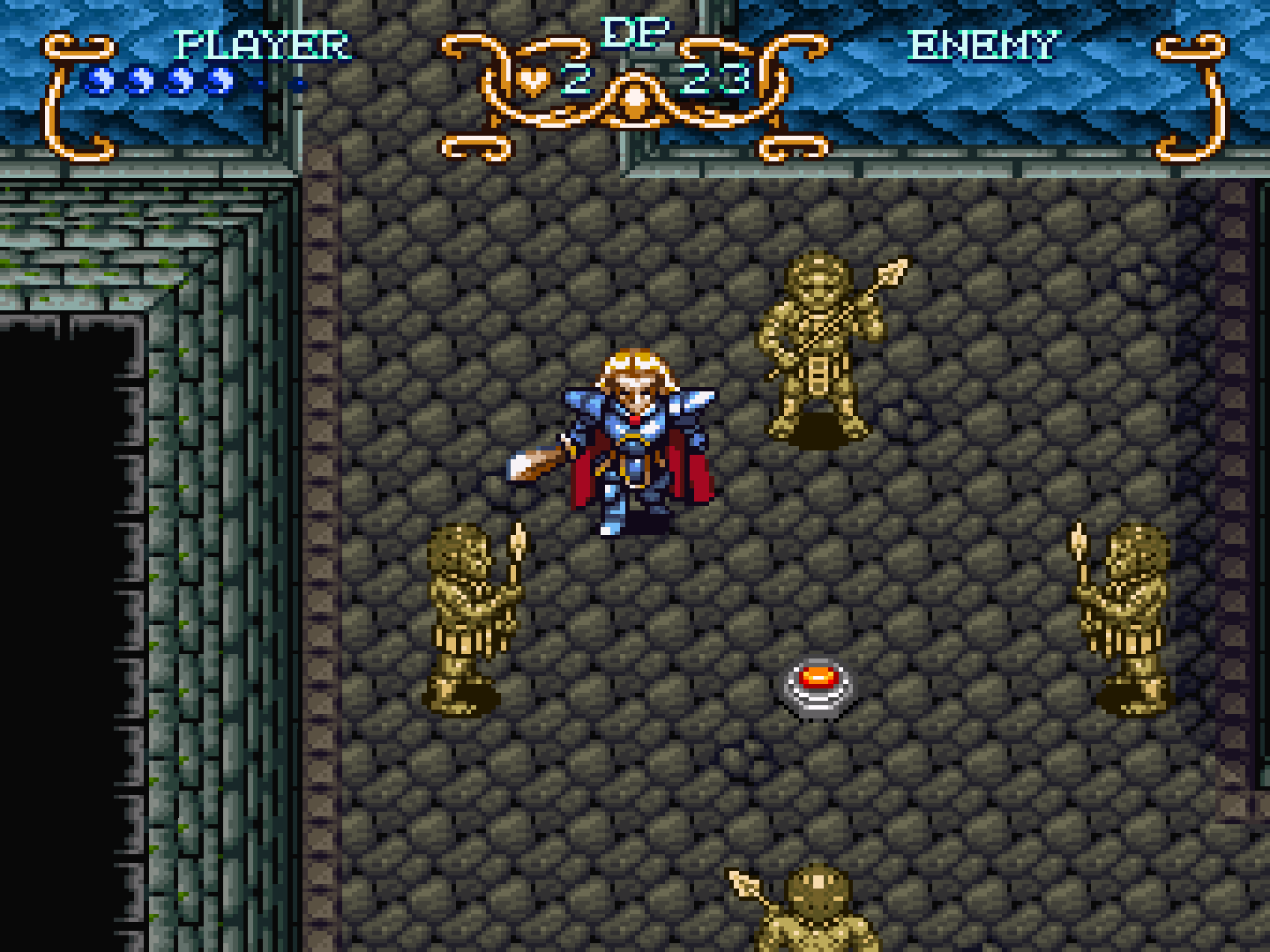 This might be one of the most important decisions I have to make here.

I move the statues far away from each other as possible, and push the button.

After a short bout, I climb the stairs and rush quickly down the ramp.

I go down another set of stairs and fight some more.

I pick up a large, glowing blue gem, which also recovers some of Freedan's health!

After the area's clear, I go up to the northern passage, leading me back to the chamber with the cracked statues!

I also notice another explorer, and read his journal.

The explorer's journal has more info about the Incas. 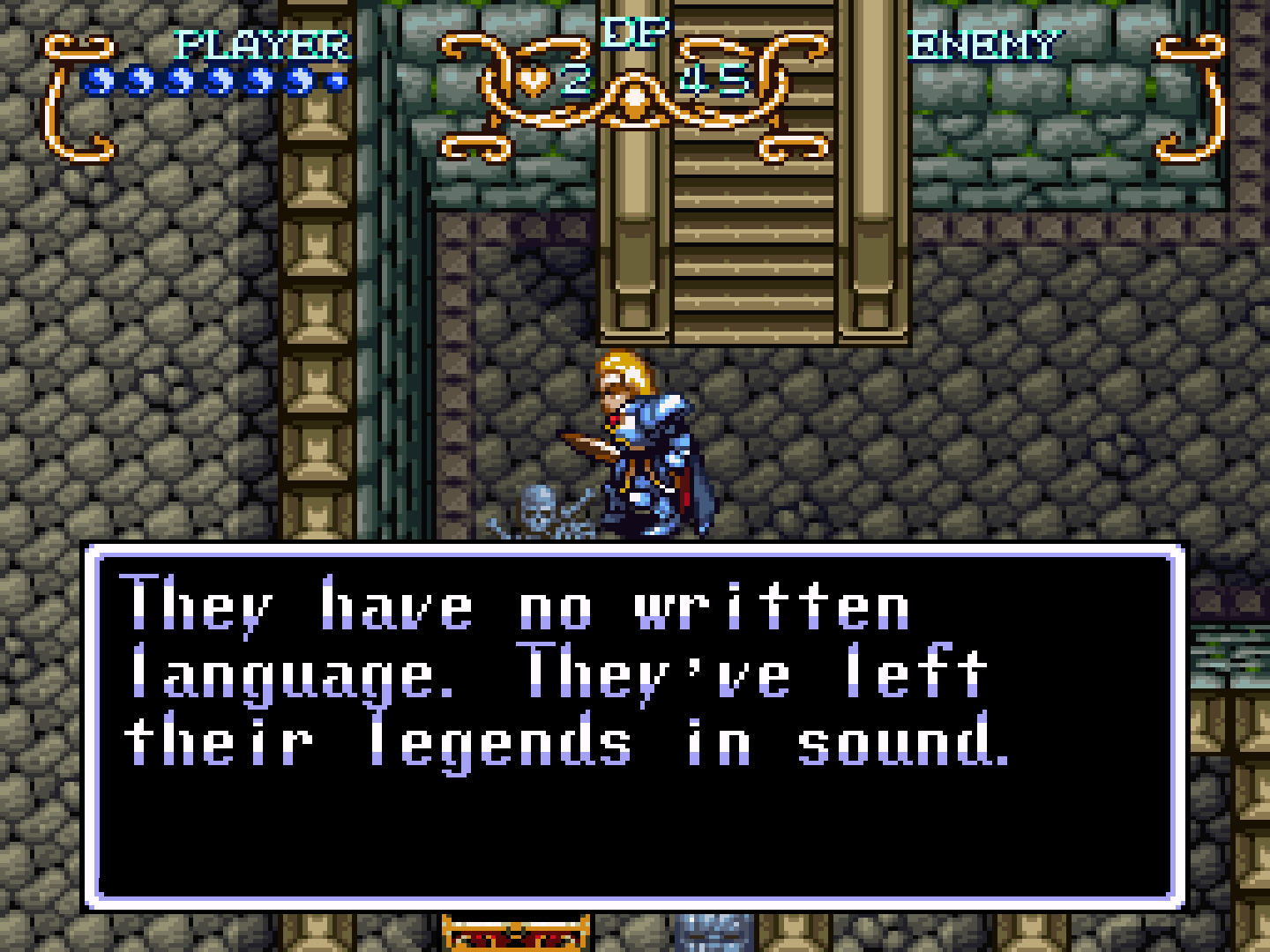 Now that we have two Incan Statues and the Melody of the Wind, we can probably solve the puzzle the Elder was talking about.

I climb the stairs, grab the second chest's contents (another Red Jewel!), and clear this area of enemies!

It seems I have to switch back to Will for this next part...