That felt quite easy! 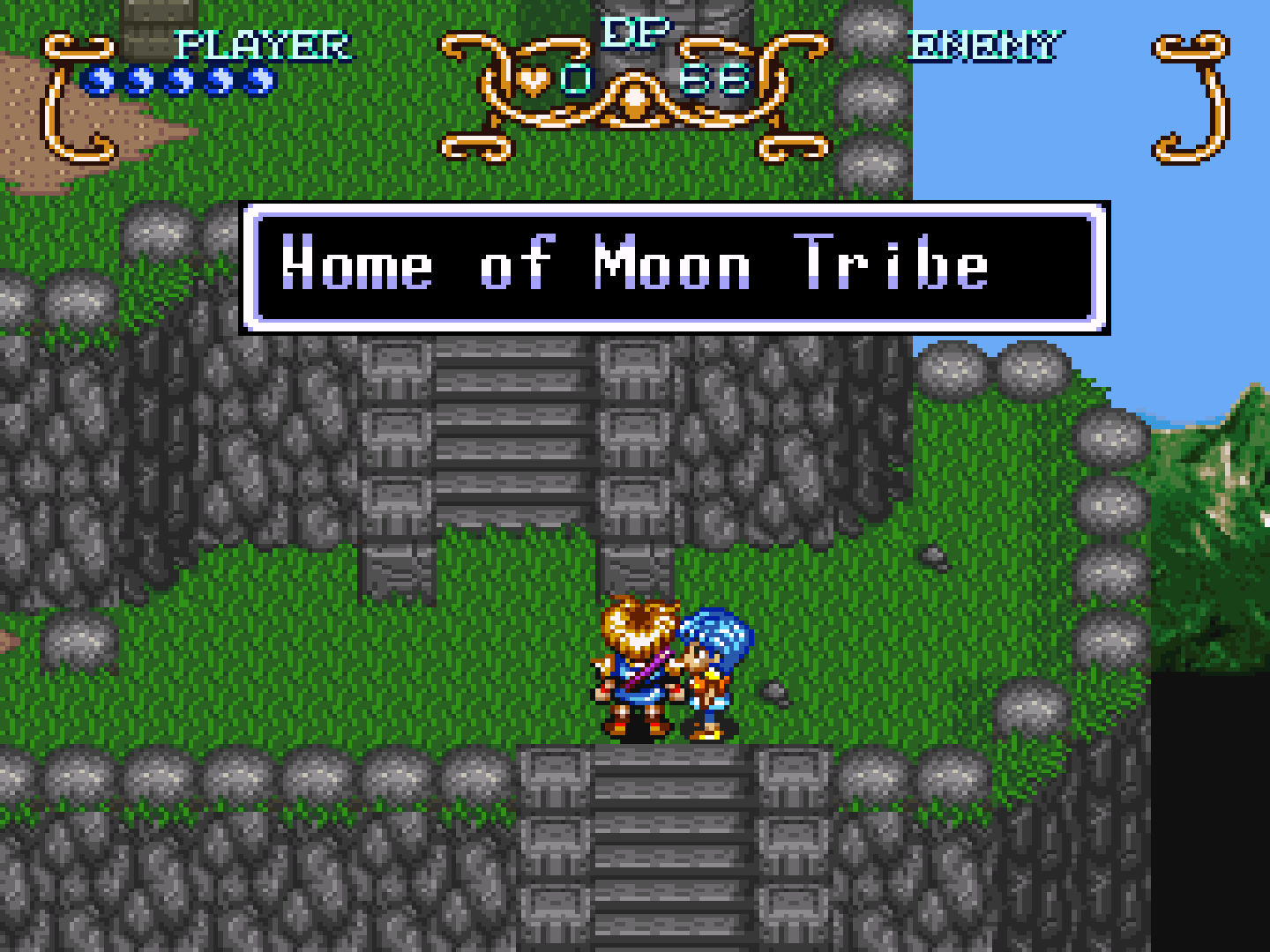 Lilly: "We've arrived. This is the Moon Tribe's home."

We walk around a bit, and go up the stairs. As soon as we arrive at the center, a voice greets us. 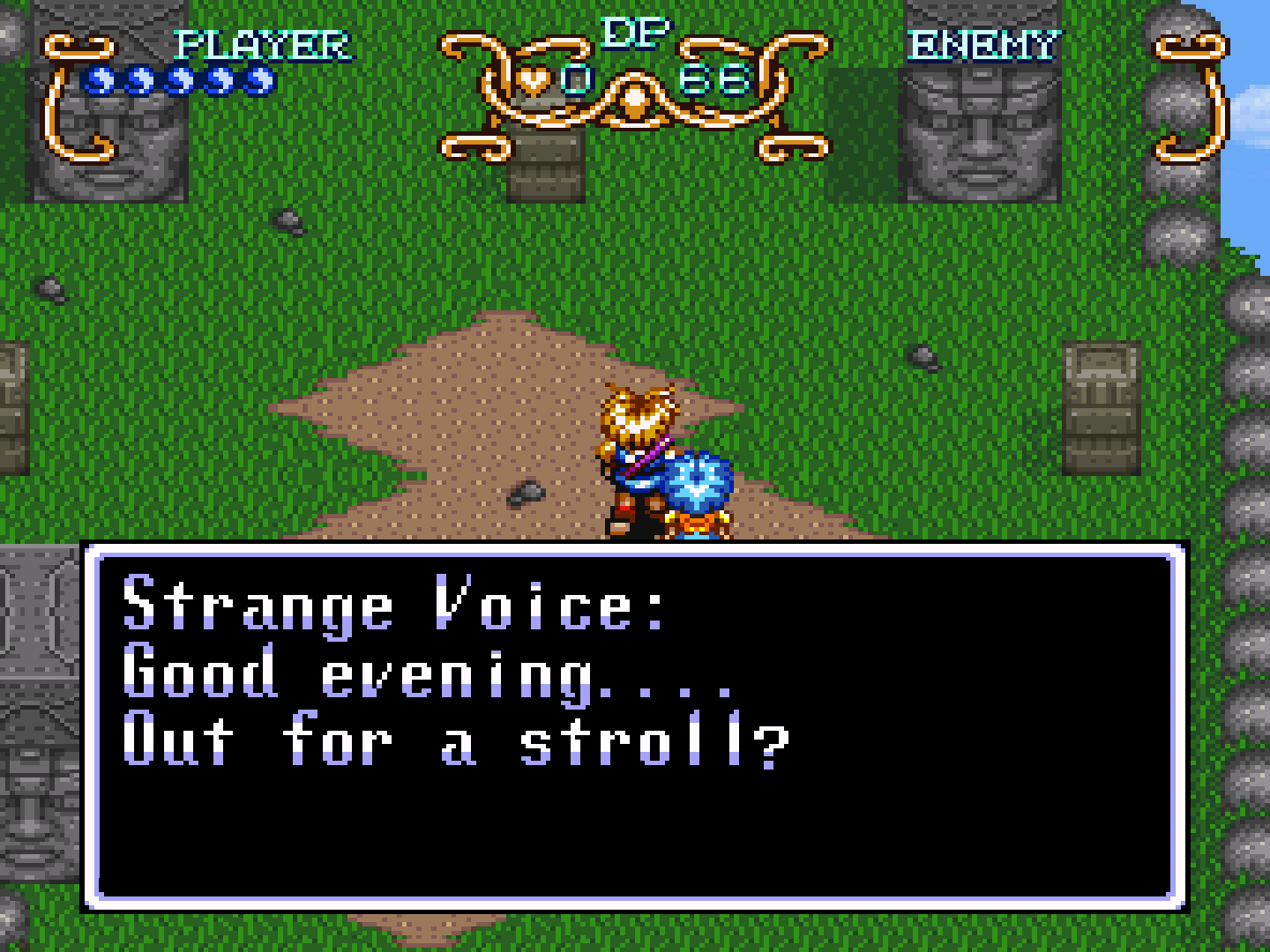 Will asks to see who's speaking.

The voice gives us some abstract words. 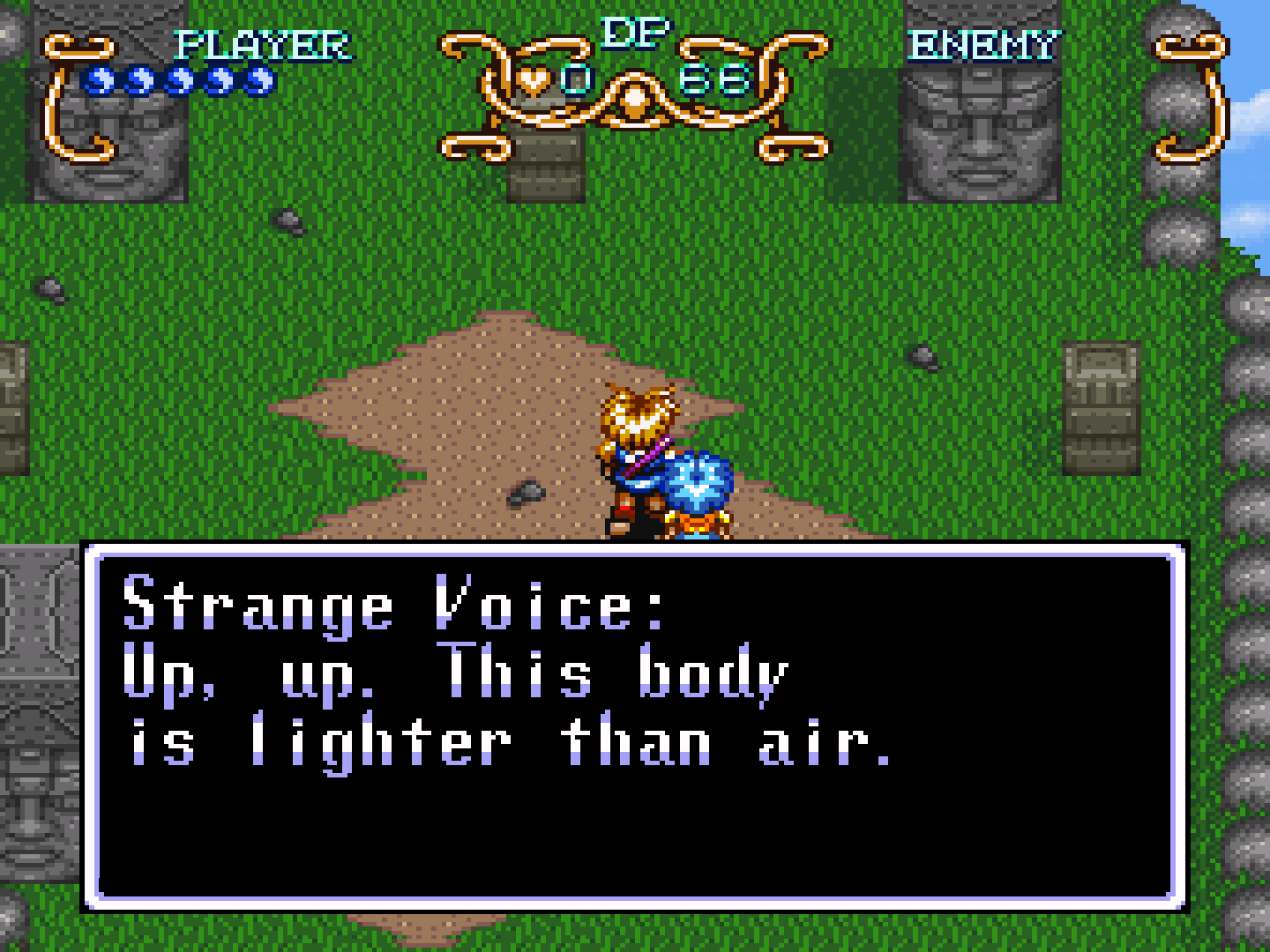 Will asks who the Moon Tribe is, and we get three choices to guess. 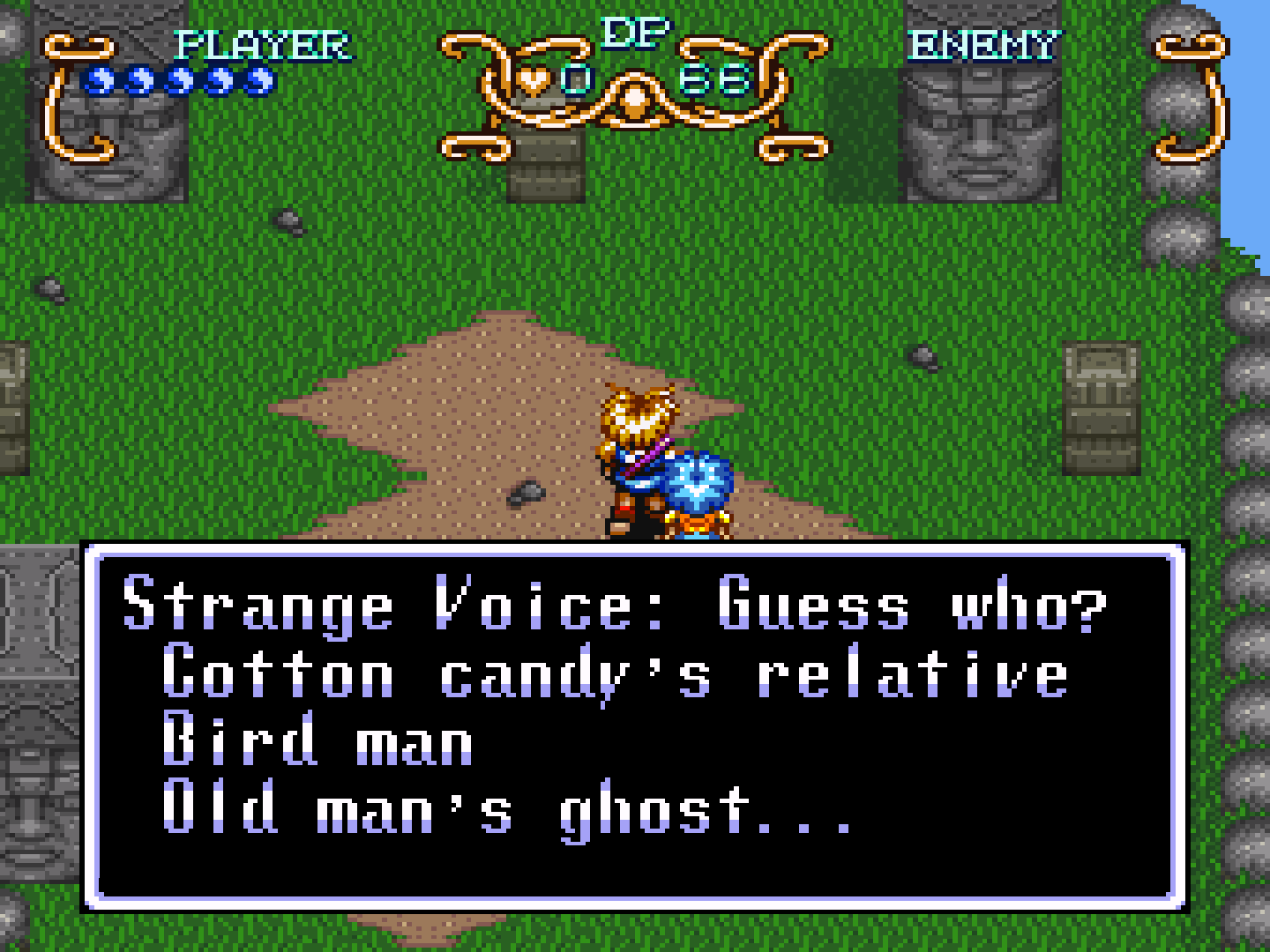 This is a bit of a tricky decision. I select "Bird Man." 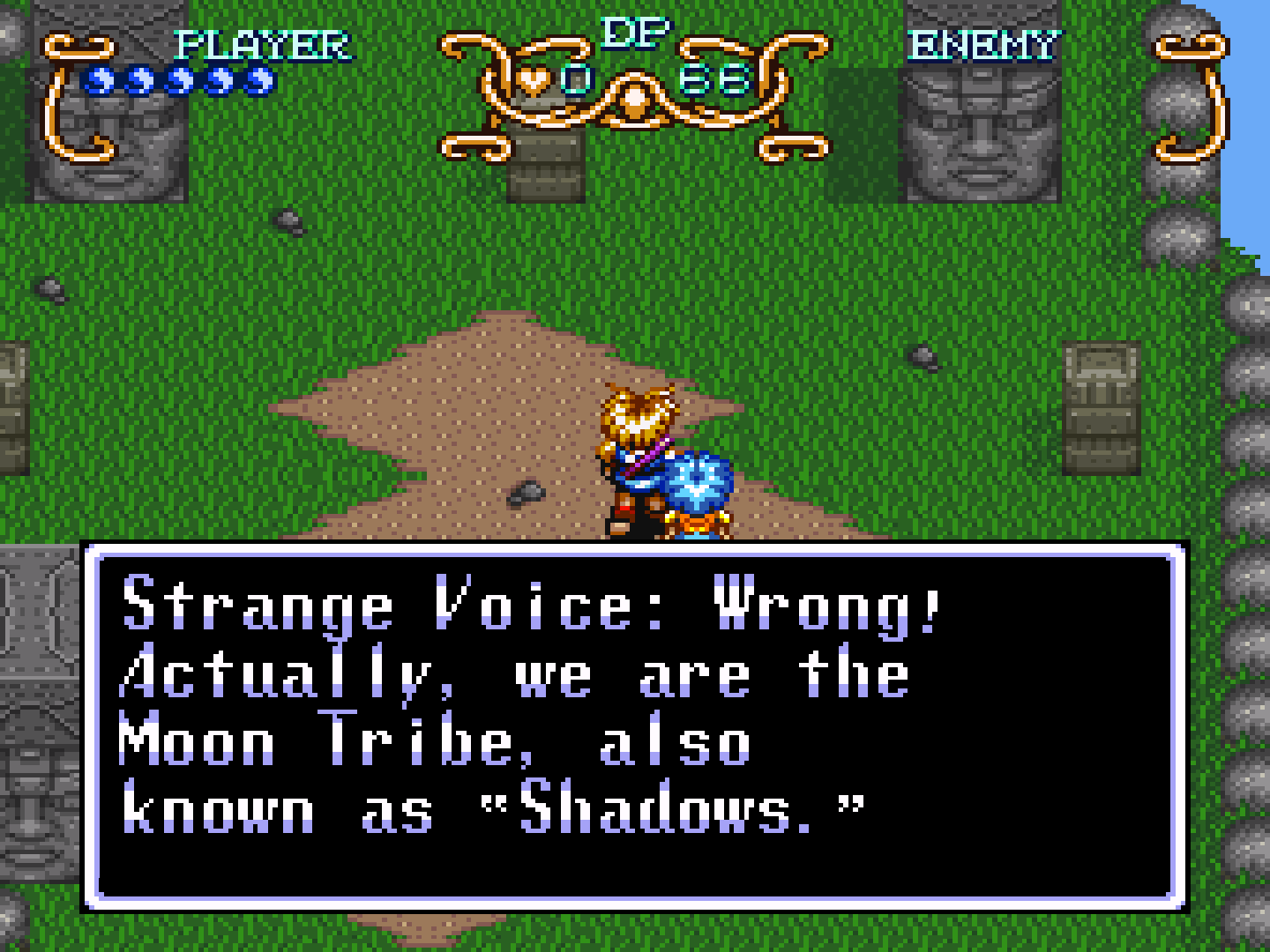 And out come the Shadows, or the Moon Tribe, skull-shaped ghosts!

I try to go back to the village, save, and return here, but Lilly tells us to come back.

I talk to one Shadow.

Shadow: "Wherever there's light, there are shadows. We, who were changed by being bathed in the light only once...will spend our future in a world without light."

More prophecies from another Shadow.

Shadow: "The comet is a vehicle of destruction whose evil light has changed all creatures. It's a remnant of a weapon from a terrible battle long ago."
Will: "The world will be unbearable?"

The Shadow praises Will for his observation, but the Shadow tells him he has a long way to go.

I talk to a third Shadow, who mentions one of their members has been taken. He asks if we "know [our] destination."

The fourth Shadow we speak to warns us about the comet, which "comes once every 800 years," with this being the fourth comet.

Shadow: "The more light that reaches you, the stronger the Dark Power."

The fifth Shadow tells of their tribe's history.

Shadow: "We've transcended time and have lived long...We saw the destruction of the Incan Empire."

The Shadow offers the Incan statue to us, but it's located at the cave below.

Their "laughs" were probably meant to be creepy.

I head inside the cave, where Lilly decides to wait for us.

The Moon Tribe speaks to us. 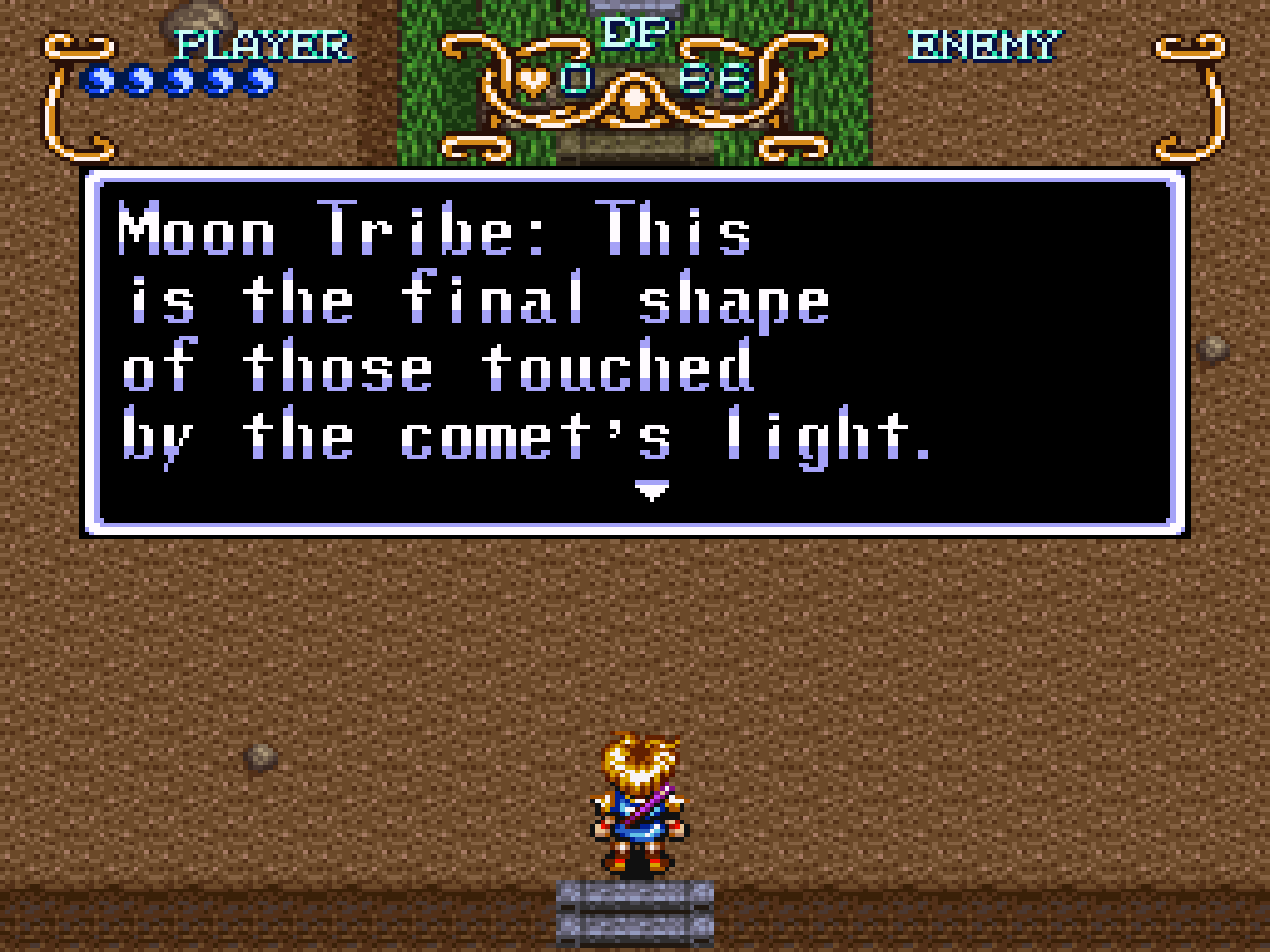 Shadow: "They are horrible creatures whose hearts are filled with hatred and destruction."

We have to fight more enemies!

We also have to defeat them in 20 seconds!

Unfortunately, I fail at it the first time!

I try to go back to Itory, but Will stops me.

The second try, I manage to defeat them before the time limit! Now what's next?

That's it! After their creepy laugh, the Moon Tribe lowers the staircase to the statue! 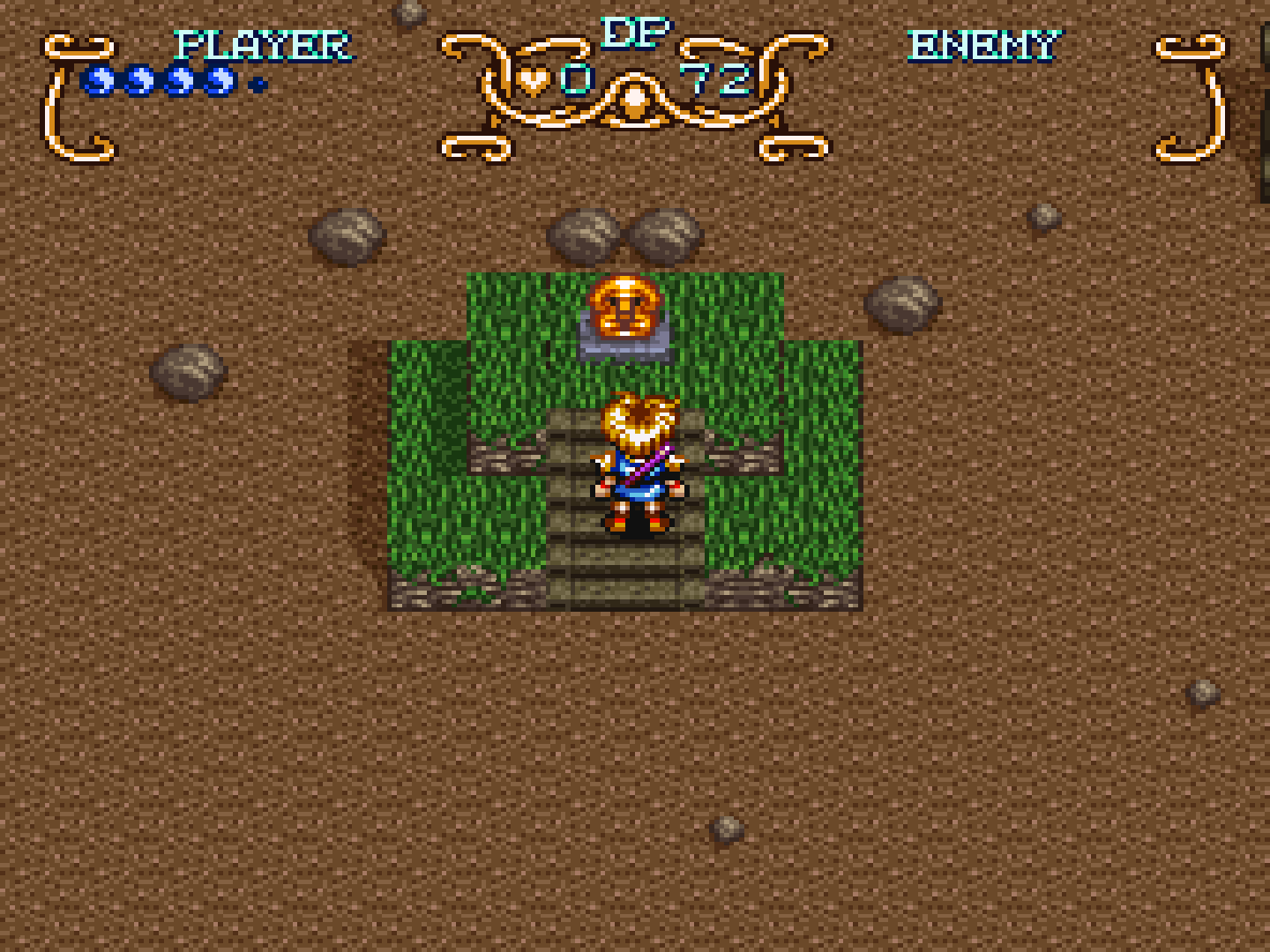 Since we have both statues, Lilly asks us if we want to go to the Incan Ruins. I say no, or rather, not yet. That's enough for one session, though it's pretty short.

But Lilly gives us a "but thou must" option. Or not, as she says that Will has to go, whether he likes it or not. 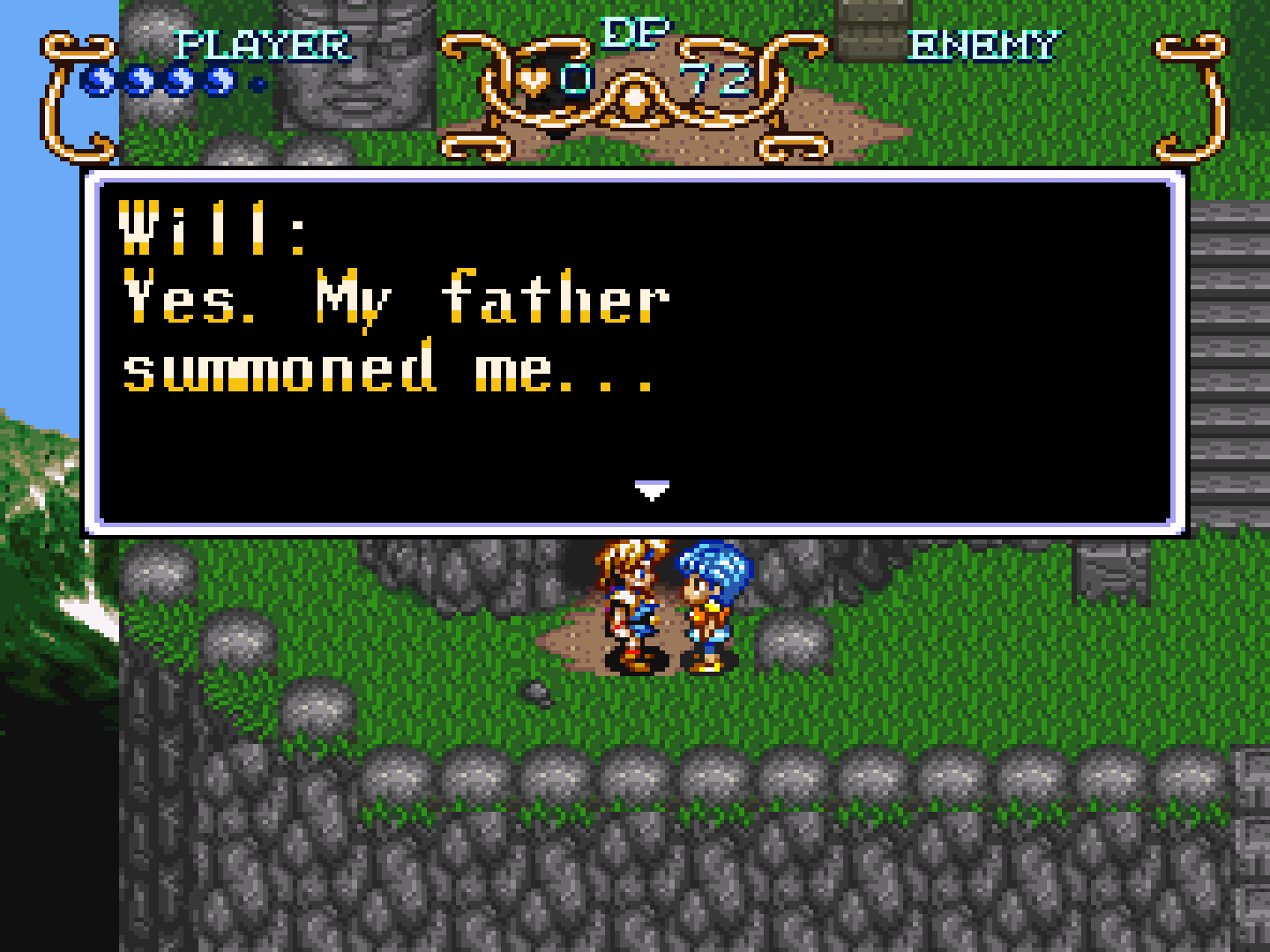 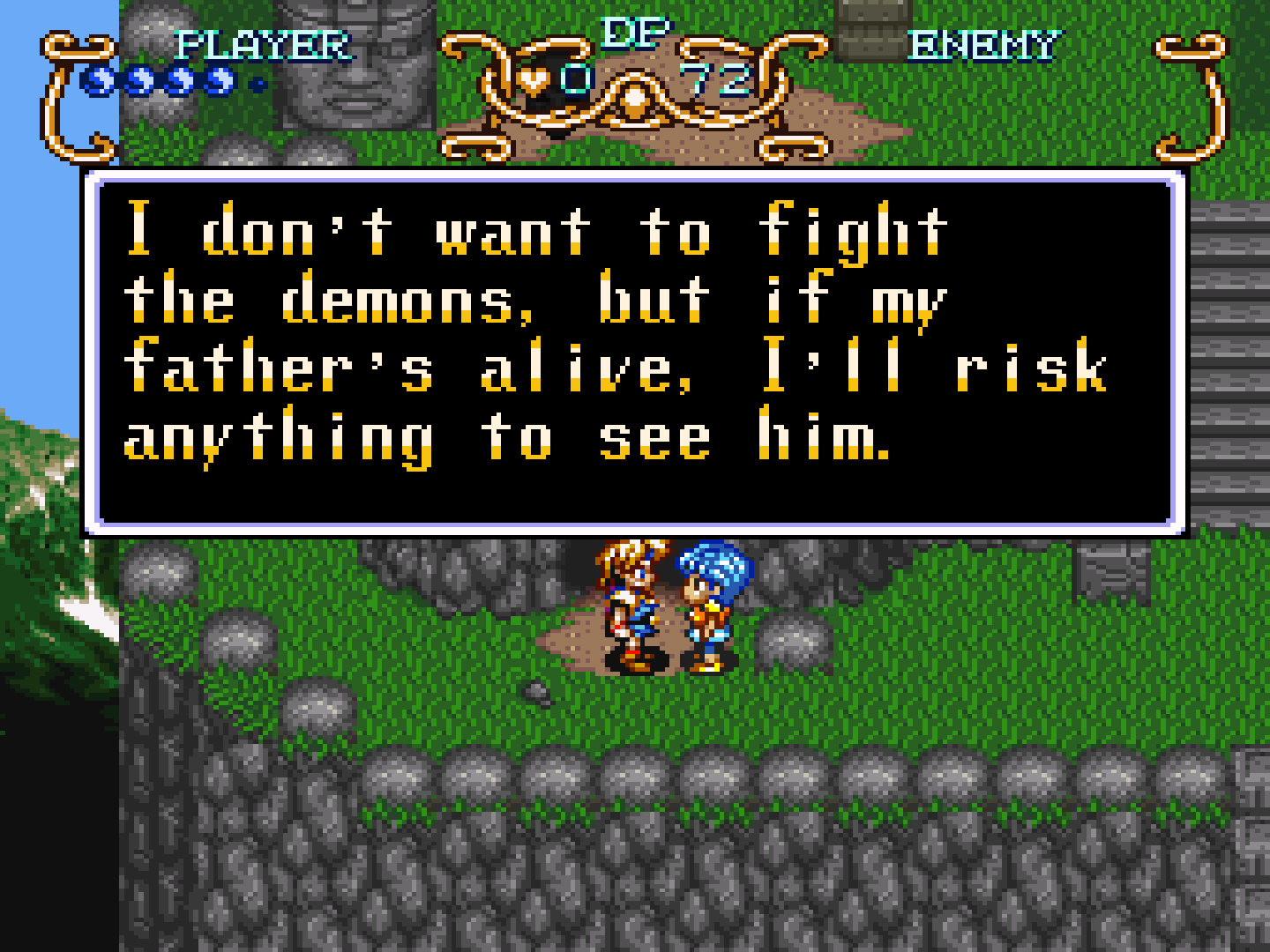 That's why I sort of like Will, he's a pacifist at heart...

Will: "You don't really understand until you lose your parents..."

Now our next stop is the Incan Ruins. 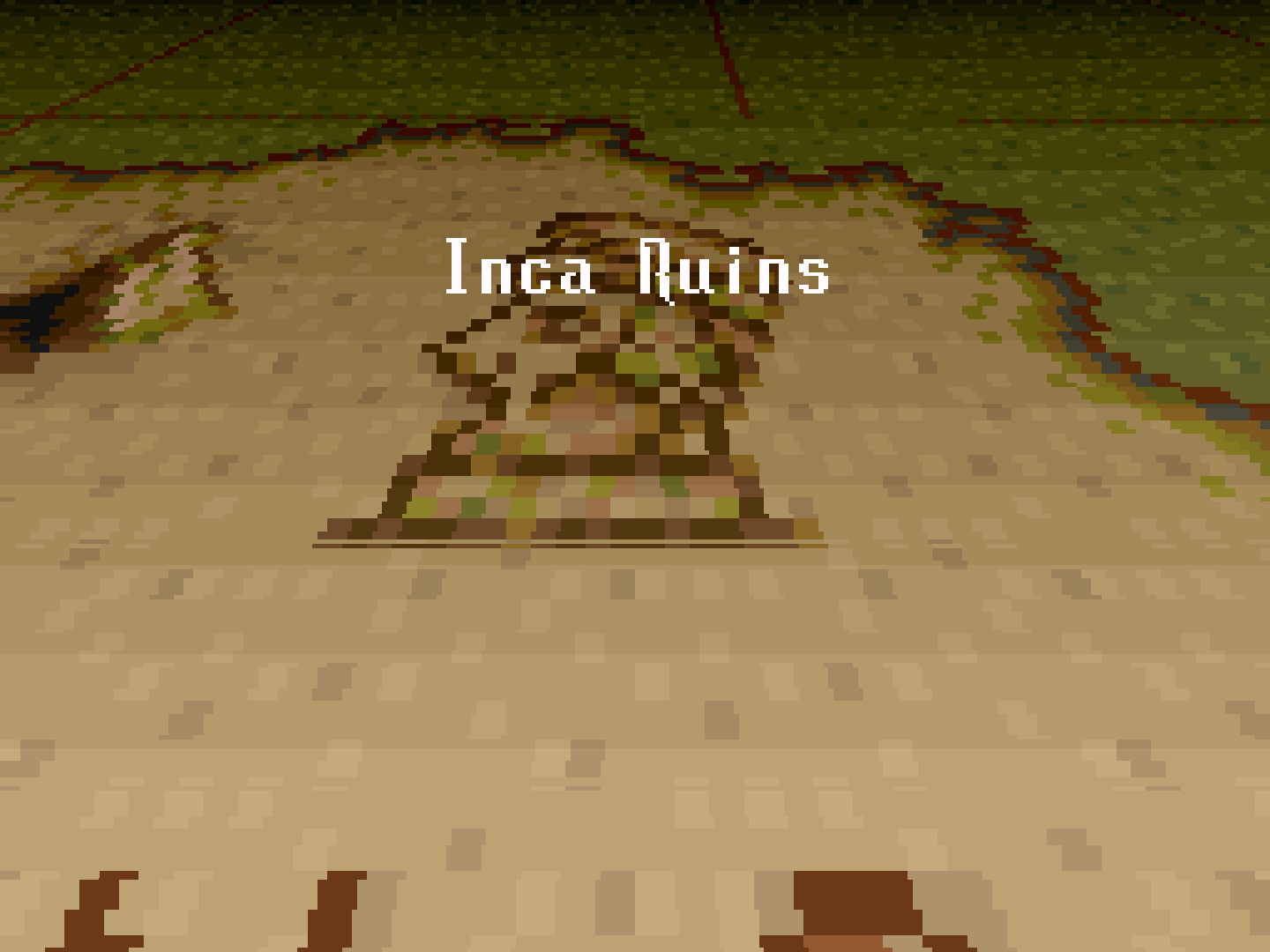 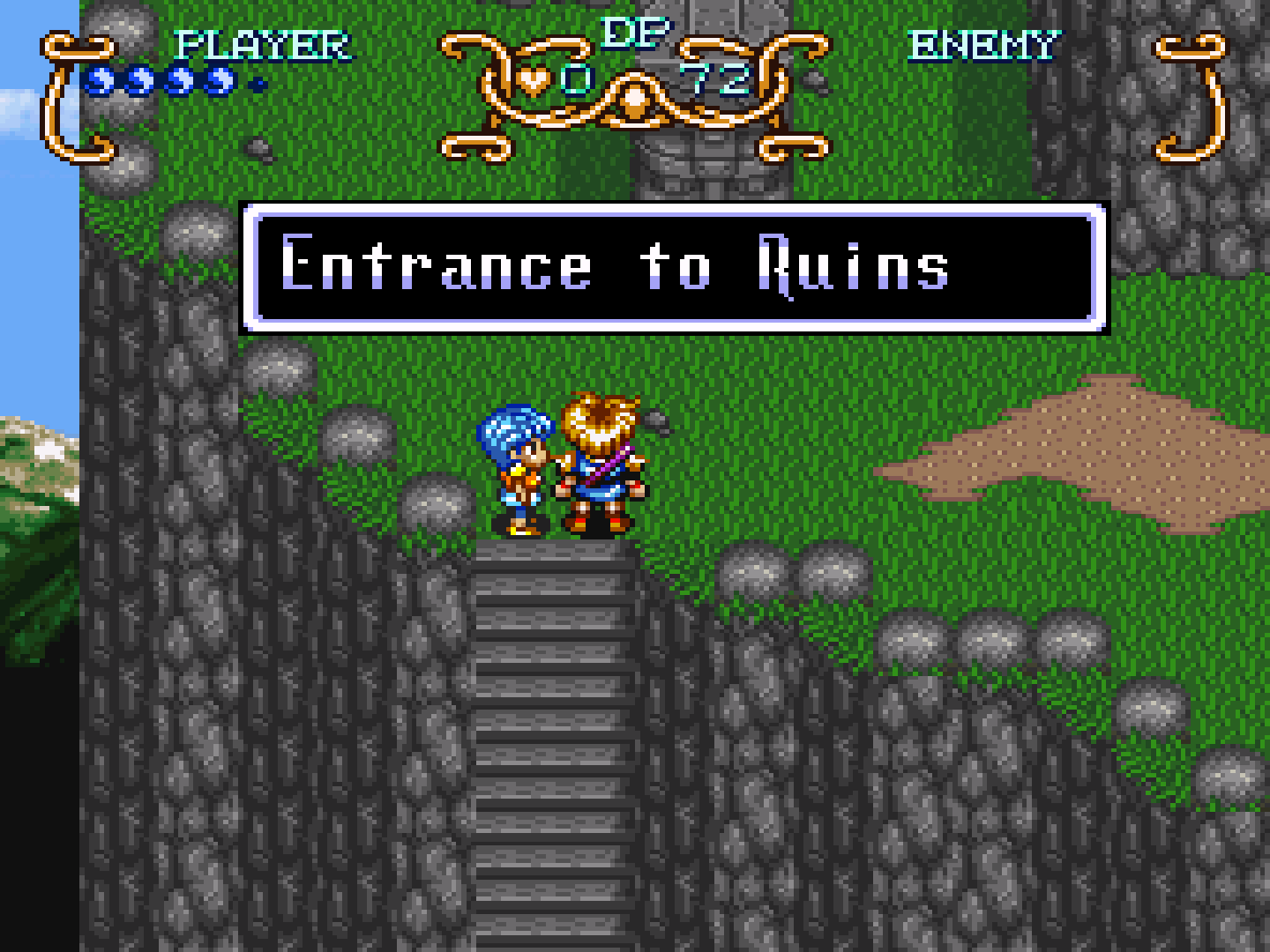 Lilly: "They say that this is where the puzzle of the Incan legend is hidden. I heard this story from the Elder when I was a child..." 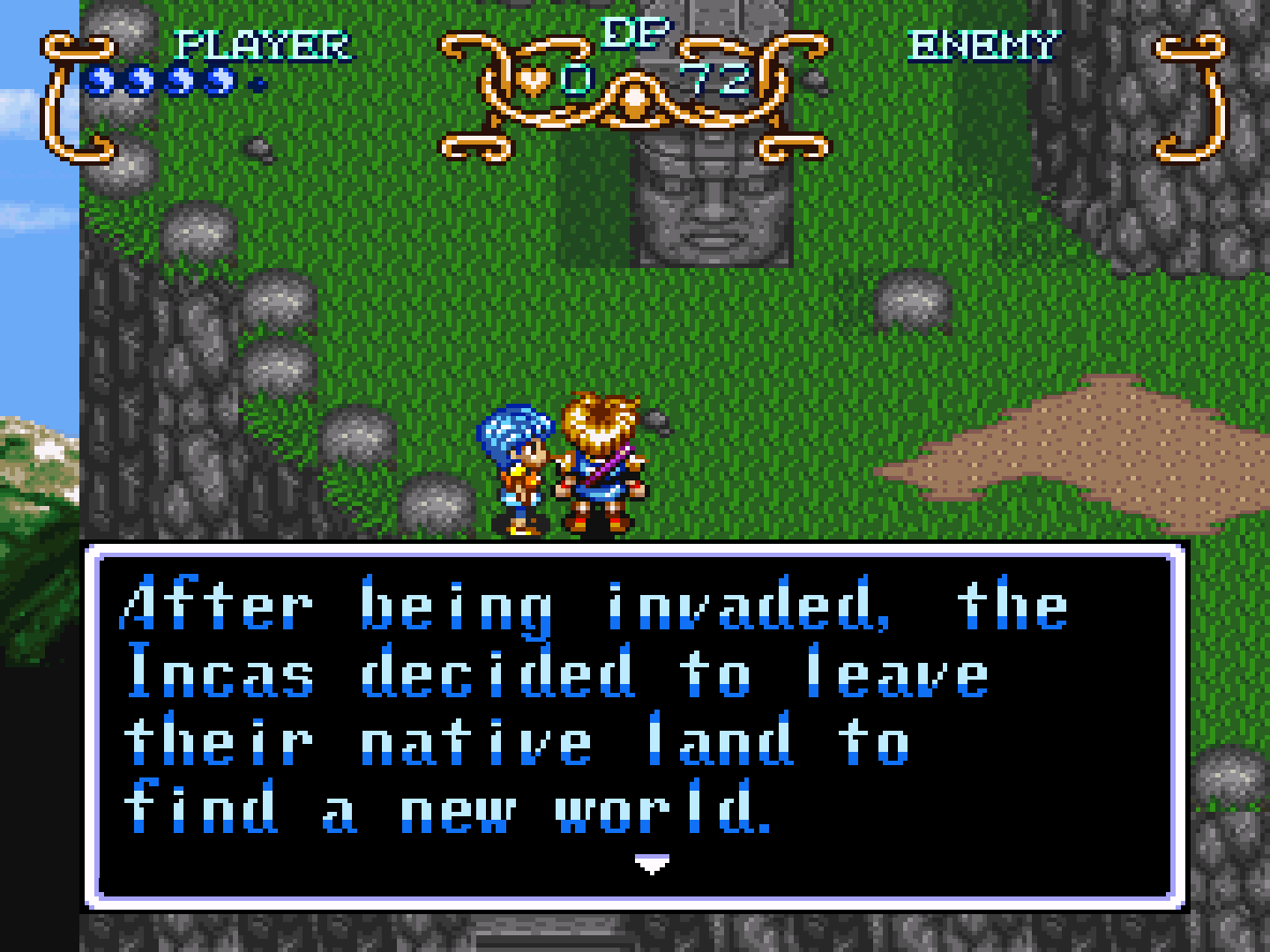 I wonder if this story took place in an AU of Earth of sorts? The game's description says that this game's timeline's set during the Age of Exploration, or a few years after...

Lilly: "They secretly built a huge ship and filled it with priceless gold artifacts. But there's no record of the ship leaving...that's probably the Incan Gold Ship in the story."

Lilly: "I don't think the Elder has ever told that story to any outsider. I wonder what he wants you to do..."

And look who snuck off to find us! 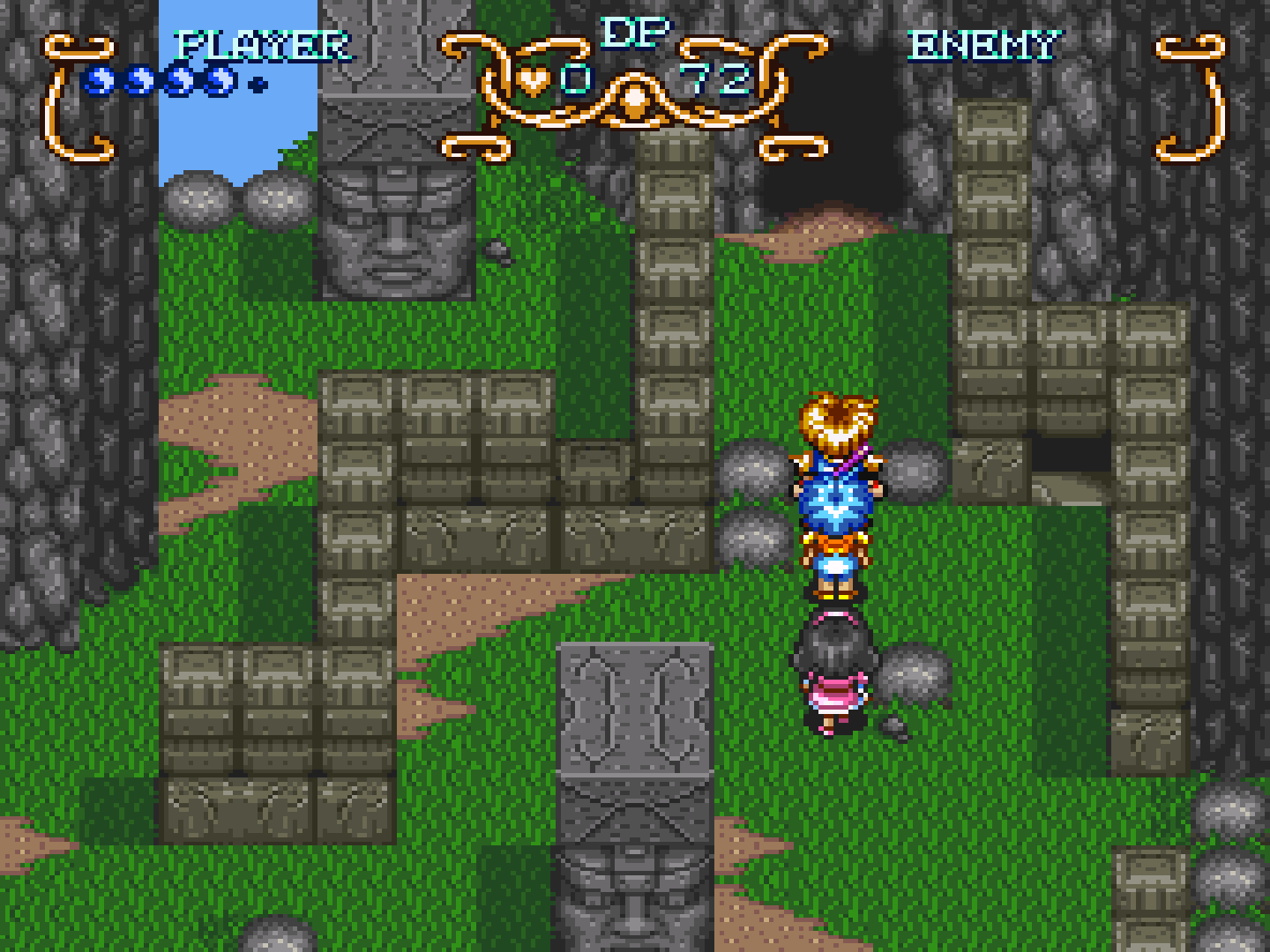 Kara calls us "mean" for leaving her behind!

Lilly tells her that it's "dangerous." I hope they don't fight again... 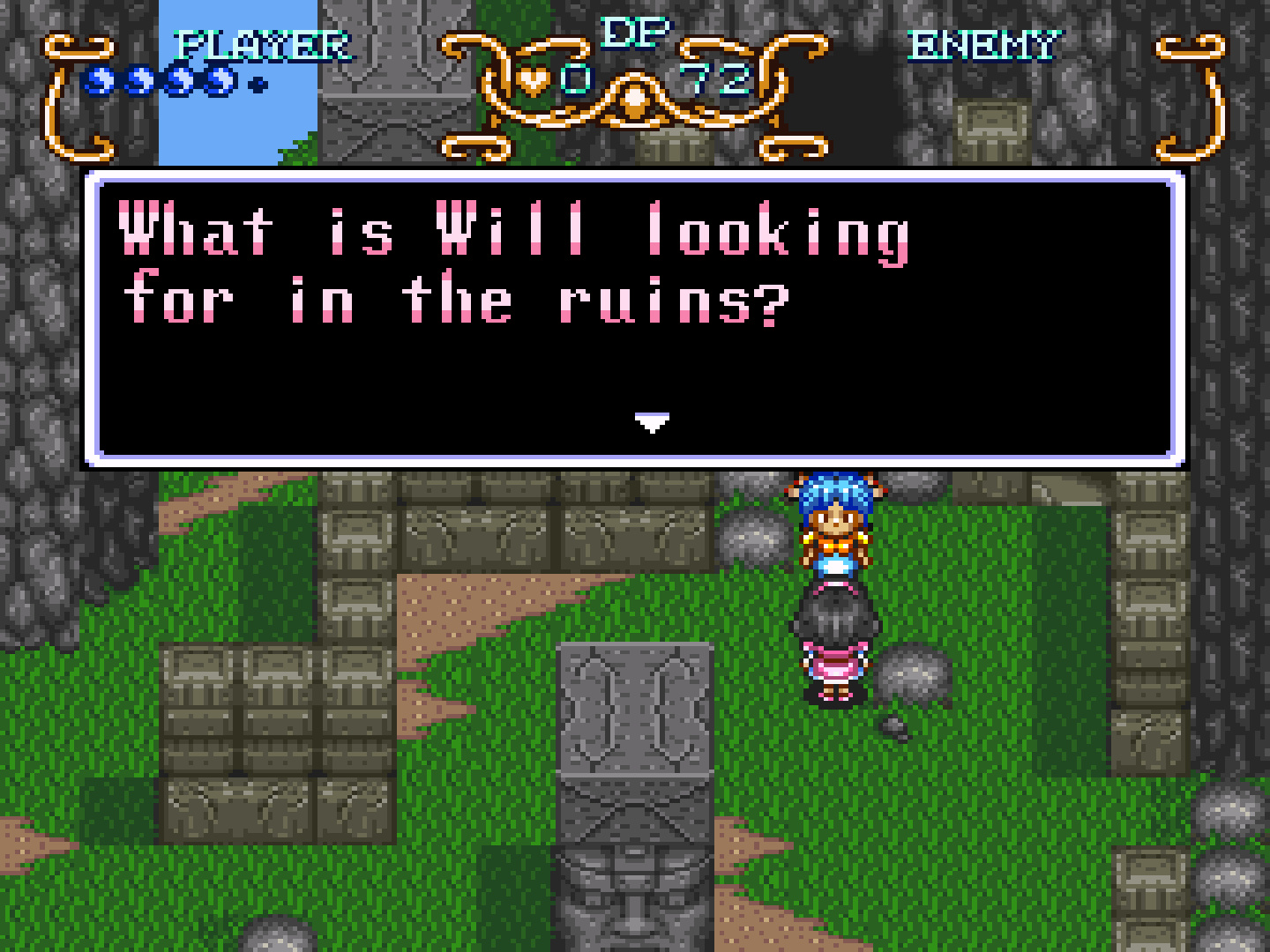 What is Will going to find here? His father? Or is it one clue closer to finding him?

Kara: "I can't just wait around and eat while Will is working so hard. I'm waiting here for Will to return."

Lilly's also going to wait for Will. I seriously wish these two were party members.

Before we're let go, Lilly gives us one more word from the Elder. Or rather, she repeats what the Elder said to us earlier.

Lilly: "'Put the statue on the Larai Cliff below the ruins, where the spirits' breath cannot reach. The valley wind will lead you to the Gold Ship.'"

I'm now allowed to return to the village and save! Next session, we face the ruins!