Lilly and Kara are already at the table downstairs, Kara still optimistic.

After saying we're ready, Kara's still keeping her optimism. Lilly's not so sure... 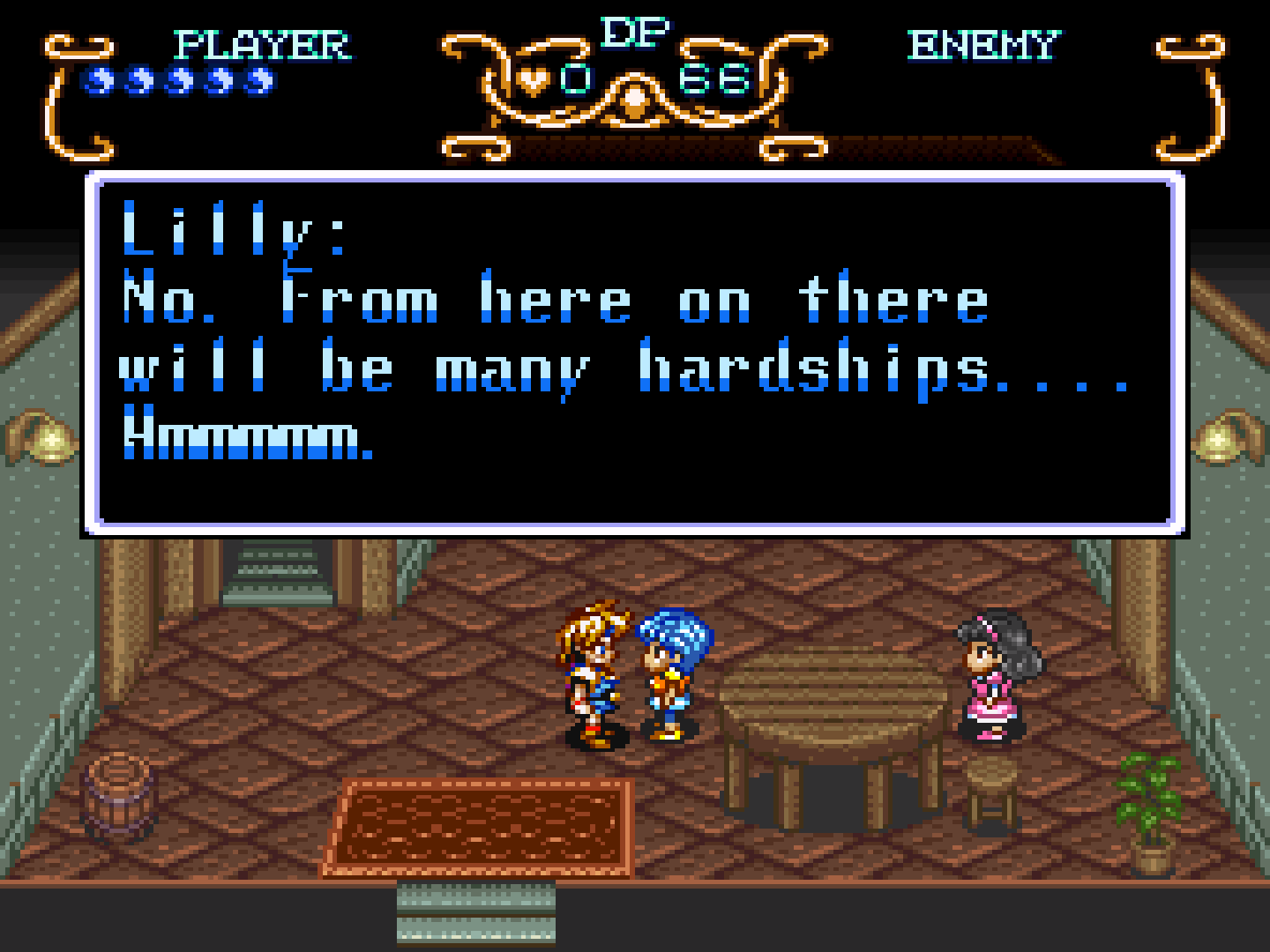 It seems Kara's tempting fate at this point.

Lilly gets closer to Kara's face.

Lilly: "...have you ever been outside the castle?"

Hoo boy...This is not one of my favorite tropes playing out here.

Kara then asks Will if he's her friend. Yes.

She has Will take her by the hand.

"Together, the three set off for Lilly's village."

Back out to the world map, where Lilly's village lays dormant in the mountains northwest of Edward's Castle. 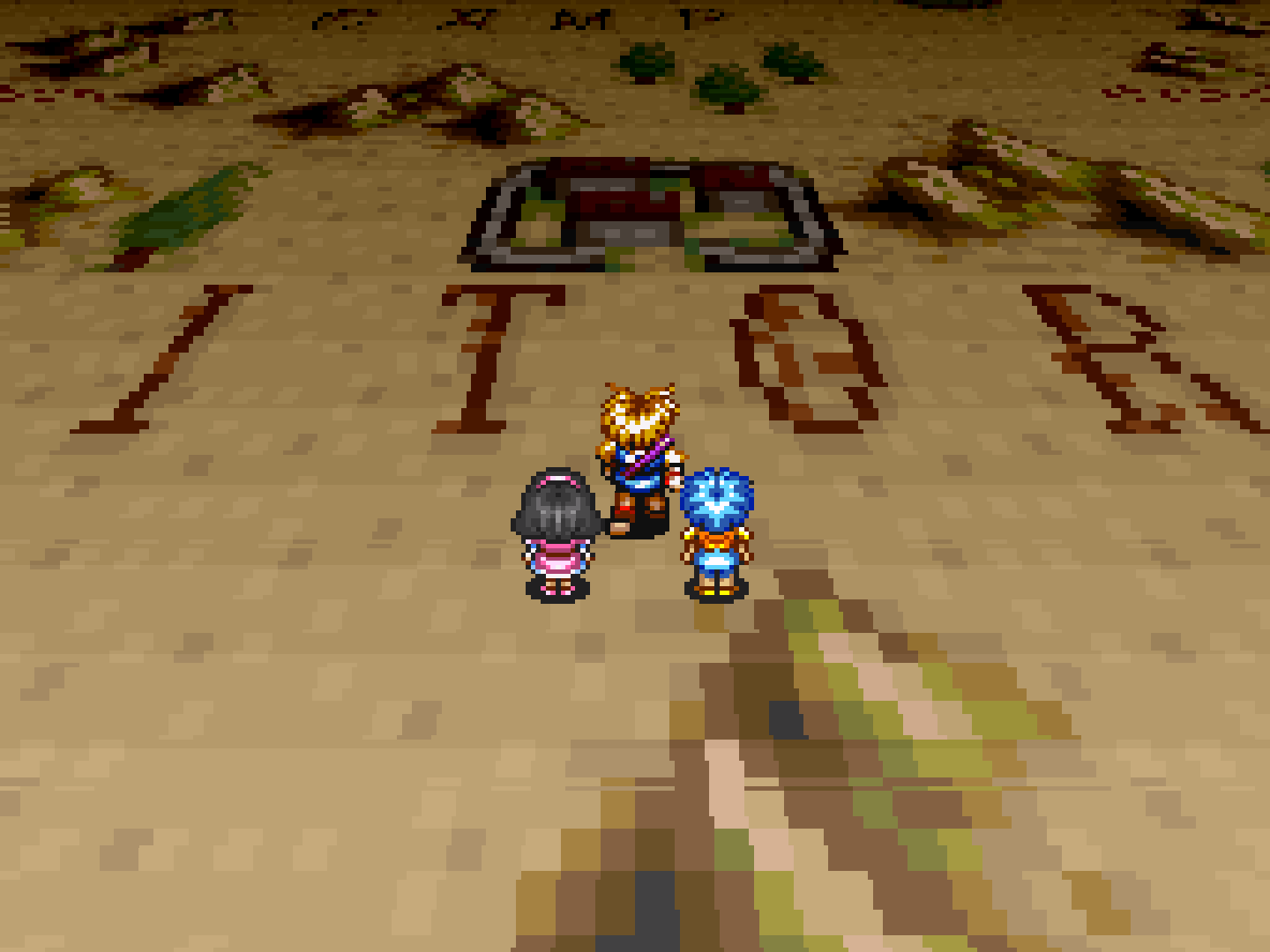 I also notice there's a "Moon Tribe Camp" northwest of the village.

Here we are at last! 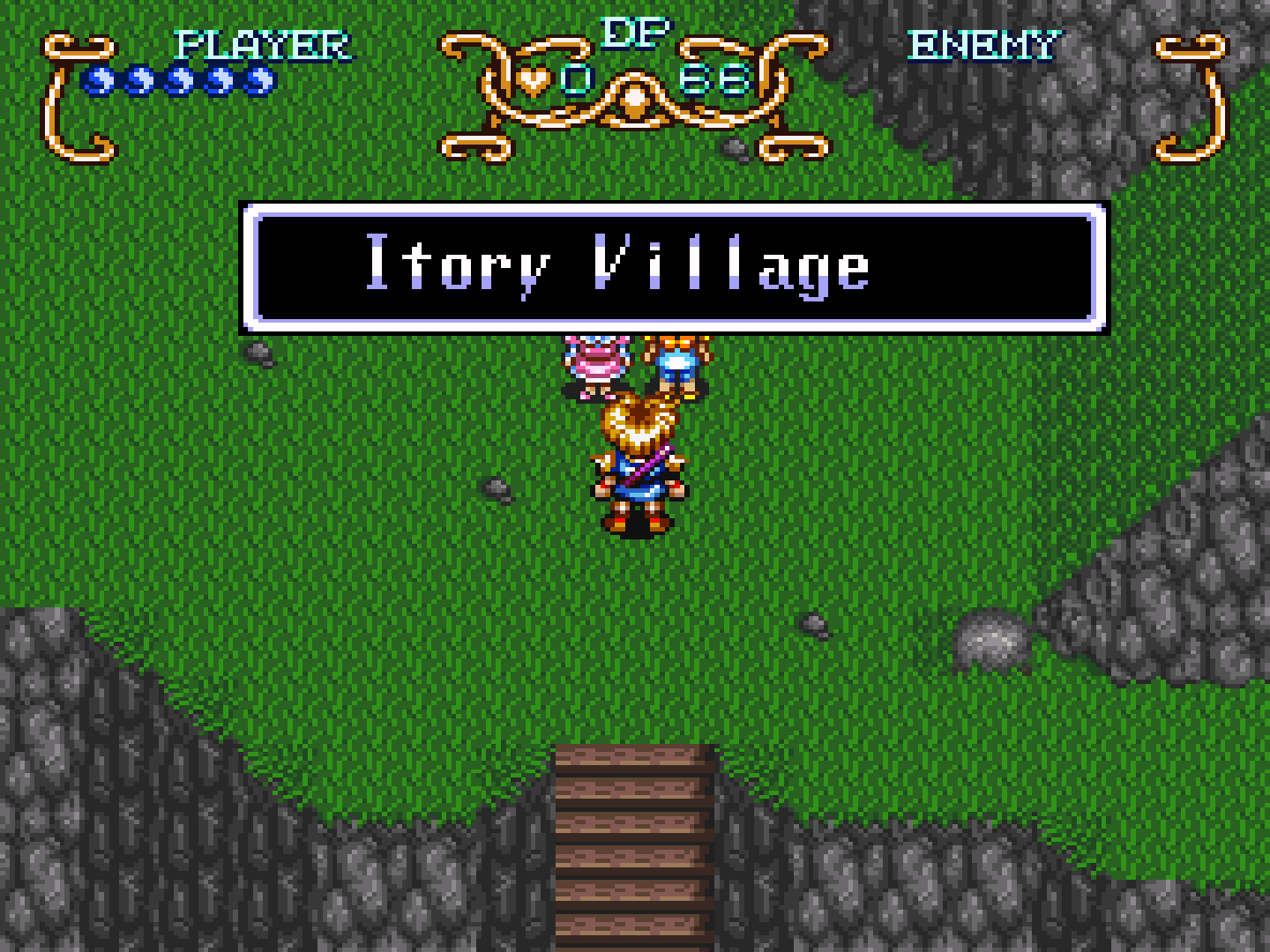 Lilly tells us why the village looks empty. 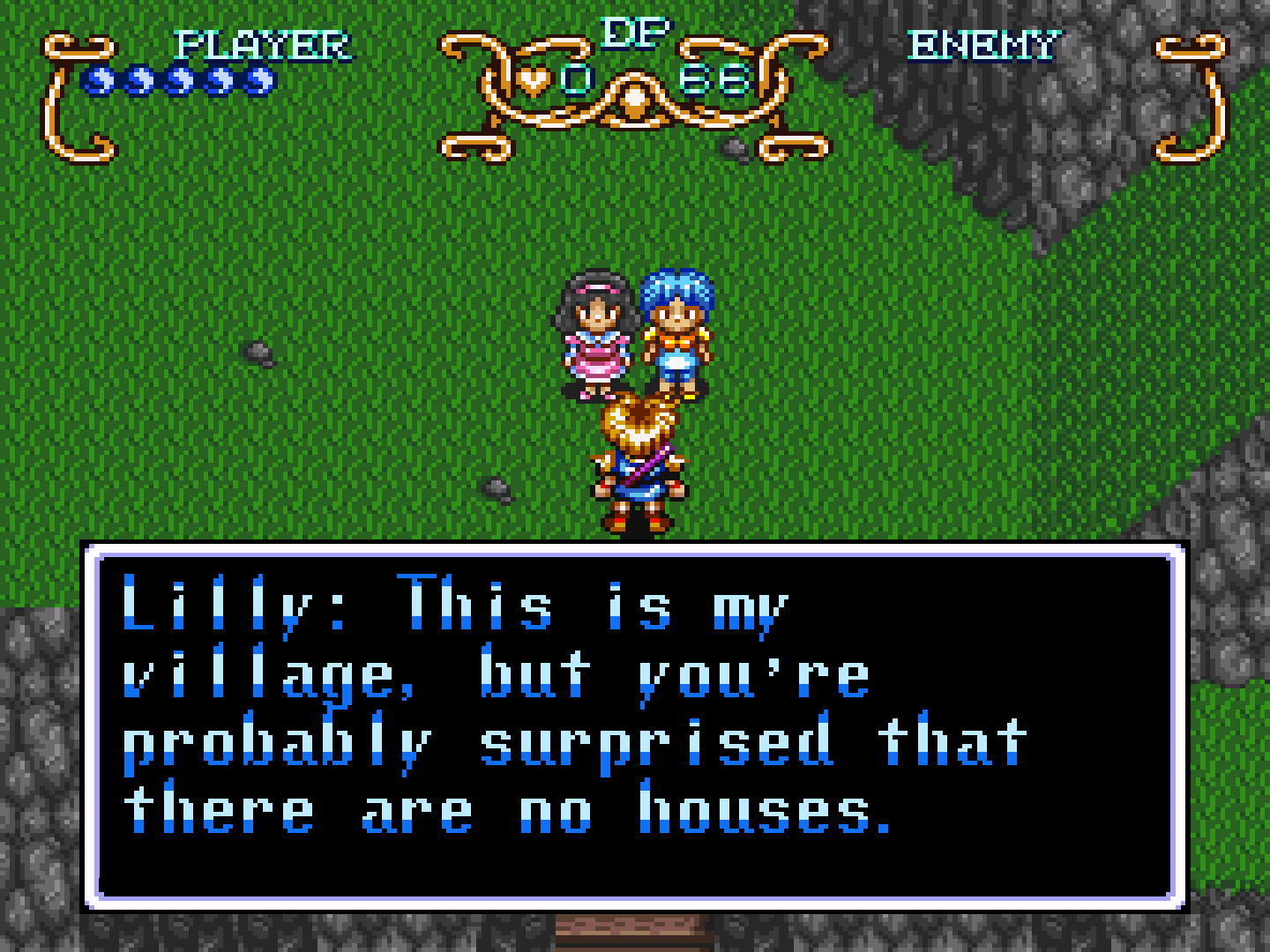 She asks Will to play Grandma Grandma's melody.

I can't move anywhere, as Lilly tells me to play Grandma's melody where he's standing now.

Let's see what happens next...

"The melody, carried on the wind, spread over the meadow."

A flash of light later... 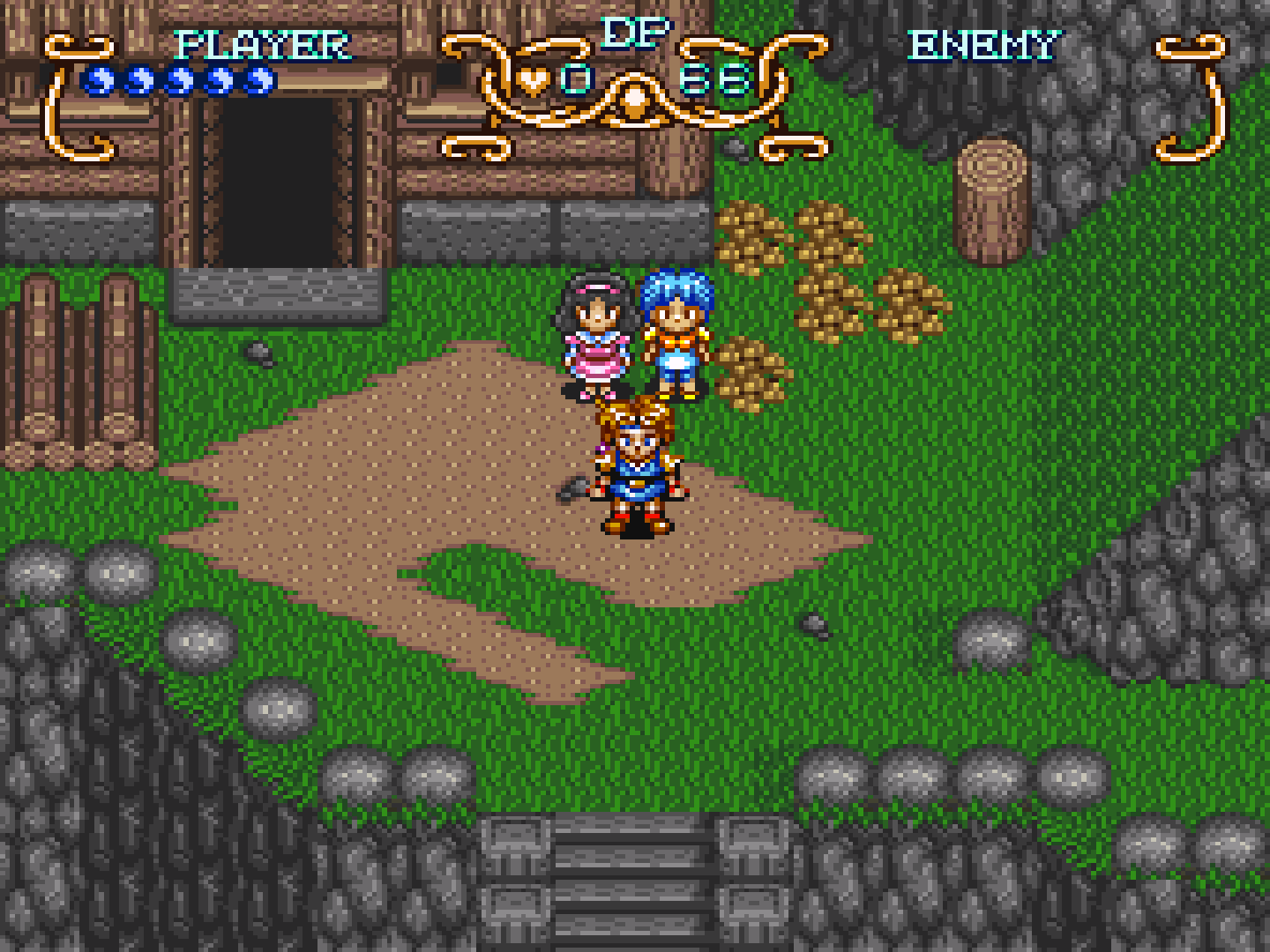 ...and a cabin reveals itself!

Lilly: "Were you surprised?"

She explains the barrier in the village again. Lilly then complains about Kara complaining. She then tells us to meet up with her at her house.

I go into the nearby cabin where a woman's there. 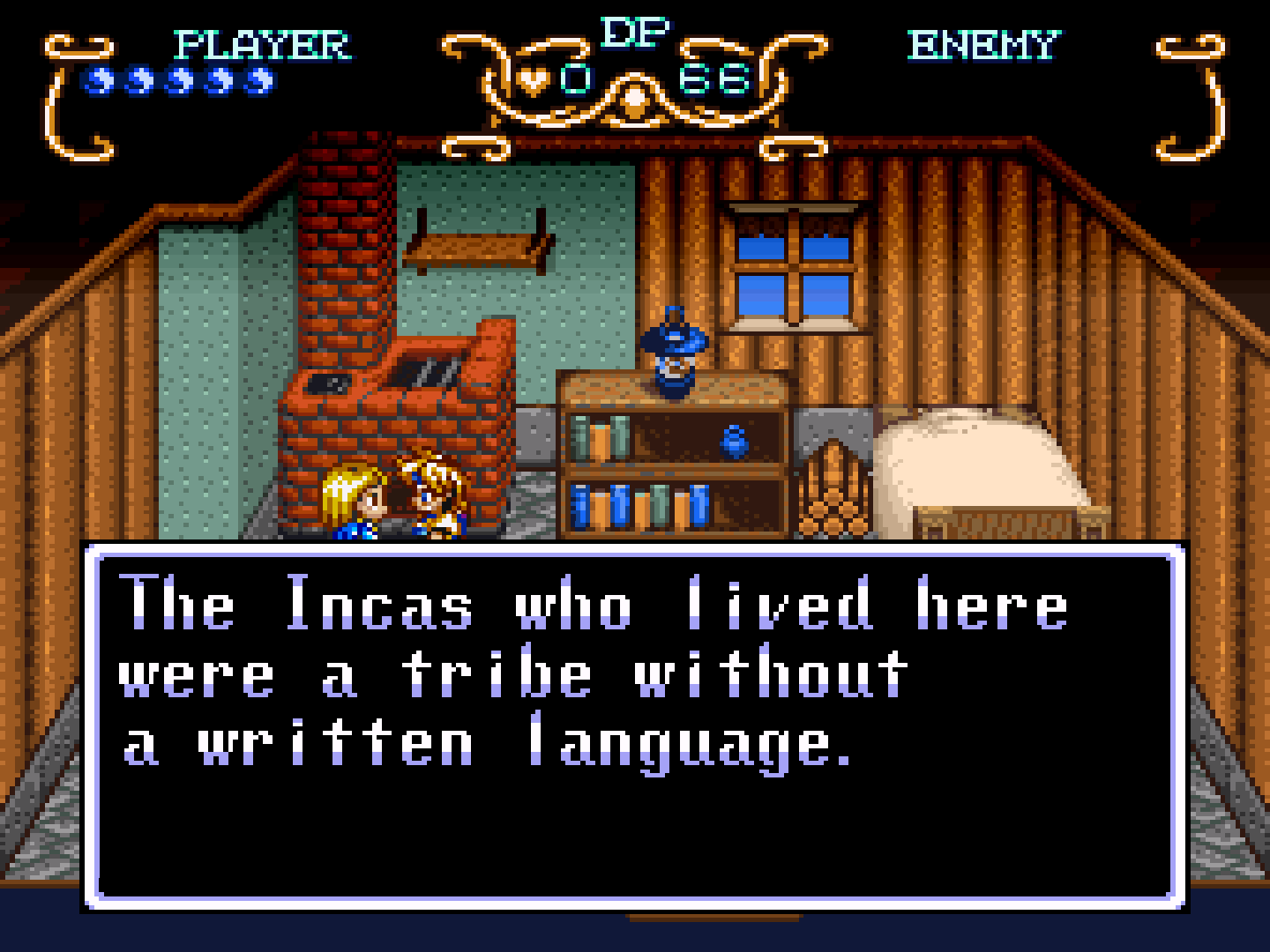 Another mention of the Incas.

She mentions how they used melodies to deliver messages, and probably, tell tales.

There's a steep grass hill here that Will can't run up to...

Another woman tells us to be friends with Lilly, since there's no one else her age in the village. Poor Lilly... 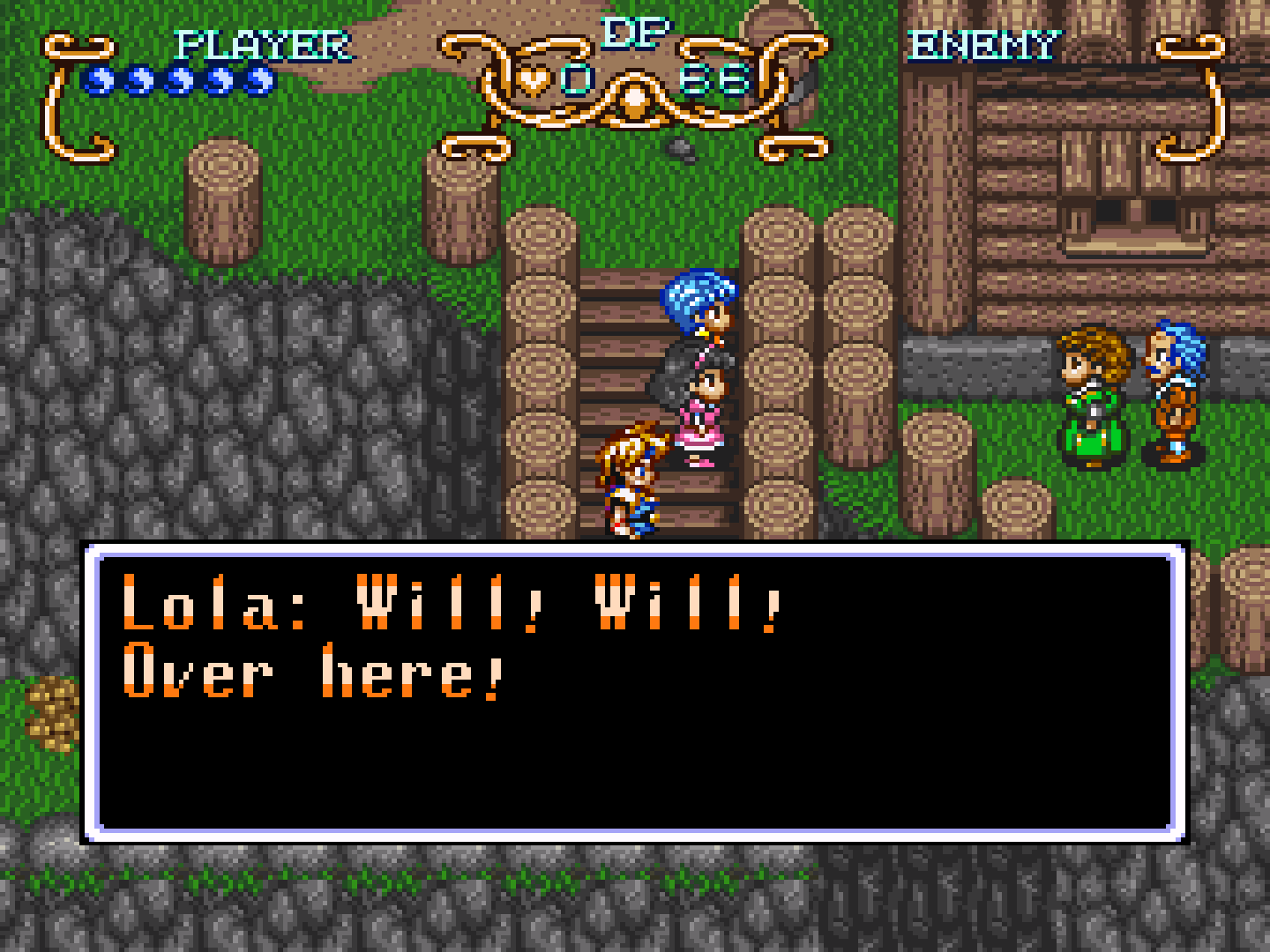 Grandma Grandma explained what happened to their house. 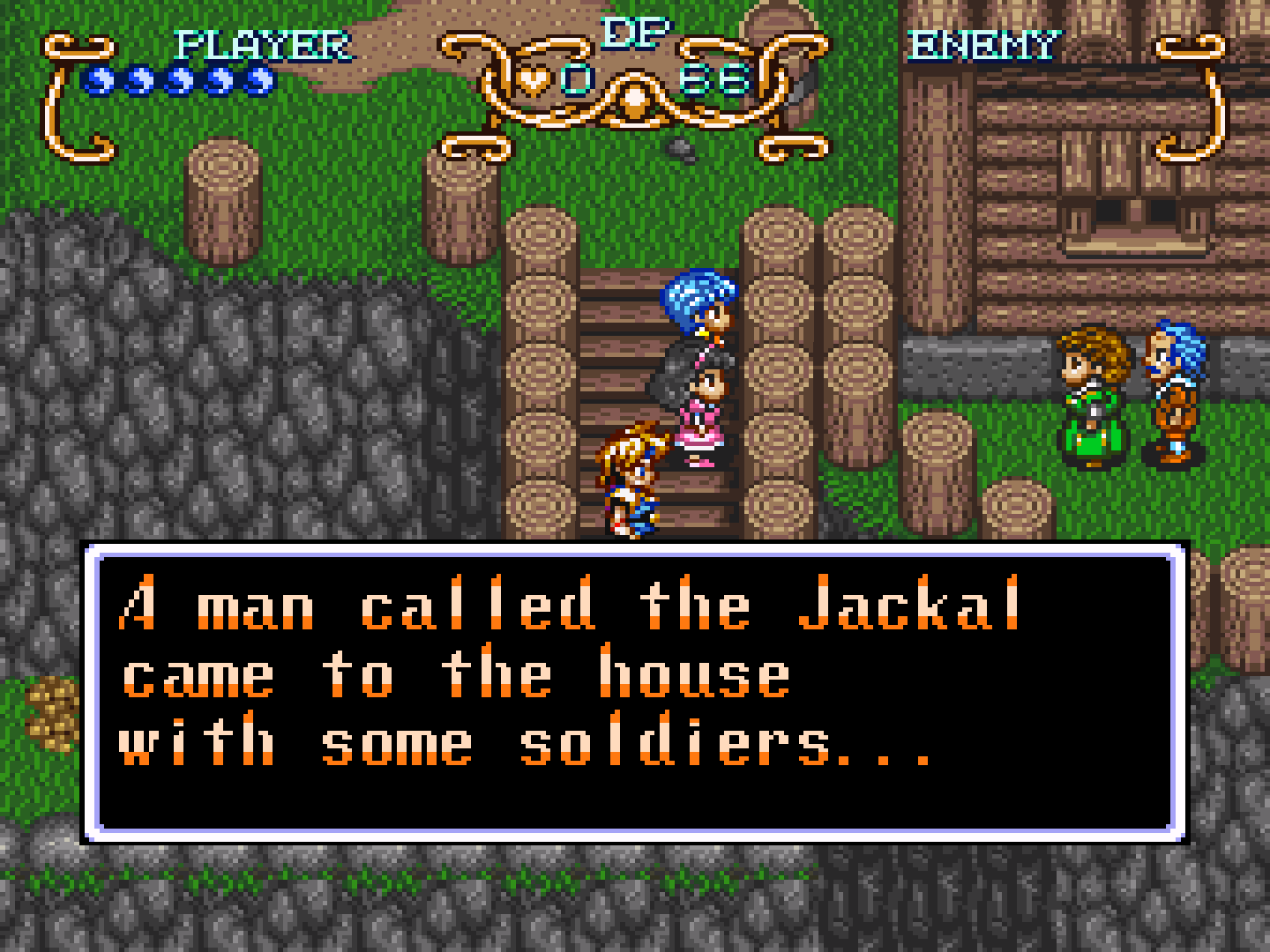 Grandma Grandma tells us Grandpa Bill panicked. She then mentioned how she took care of the intruding soldiers. 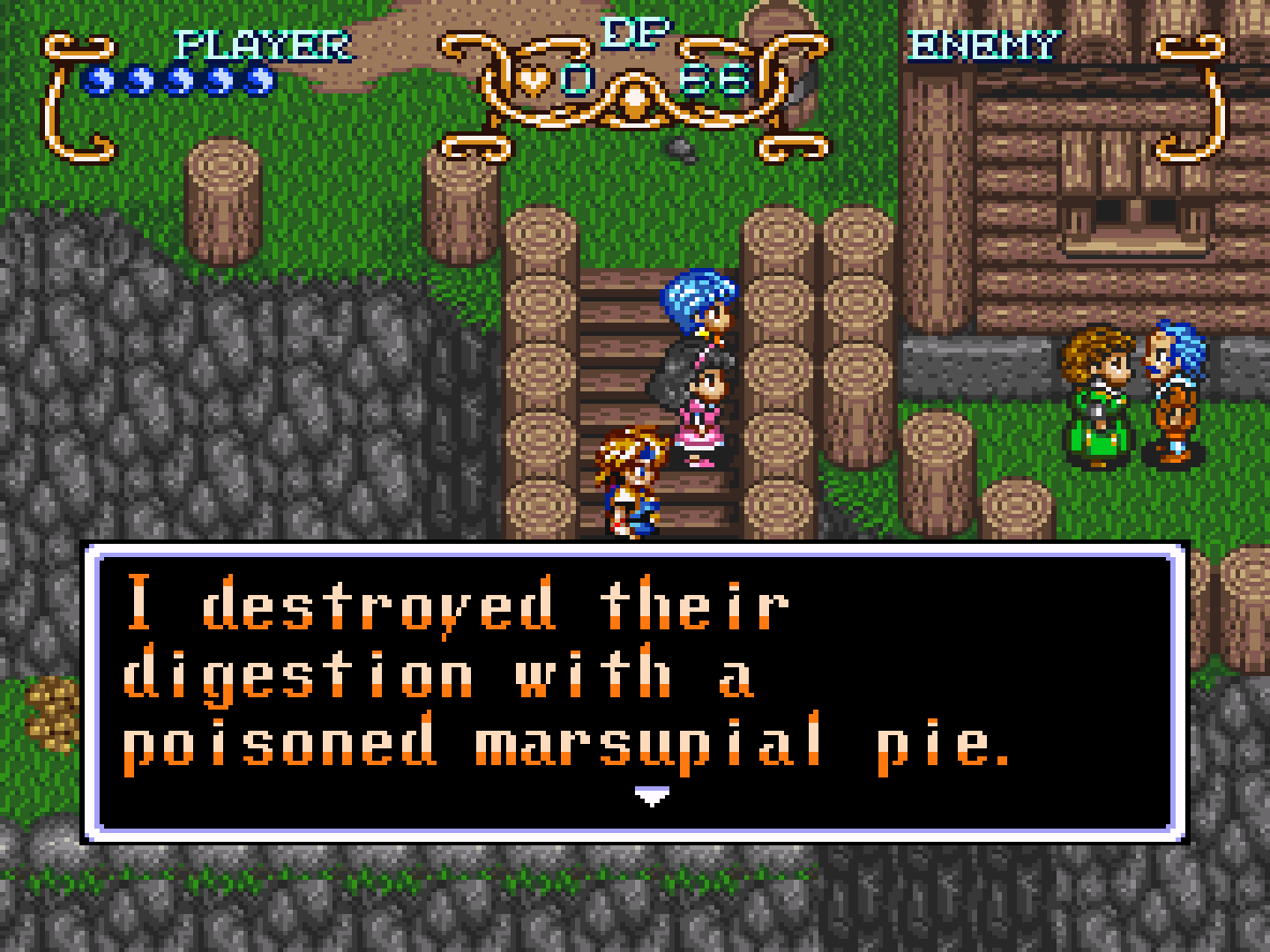 Hee...good old Grandma's cooking. I wonder where she gets her ingredients?

Grandma thanks Lilly for helping and for having Kara come around too. Lilly's not too friendly with Kara.

Lilly tells us we can go around the village to explore, but to go to her house once we're done.

We go down the grassy ramp...what a fast descent!

I head outside a bit. Checking the map, it seems the Inca Temple that Will's father wants us to go to is northeast of the village. 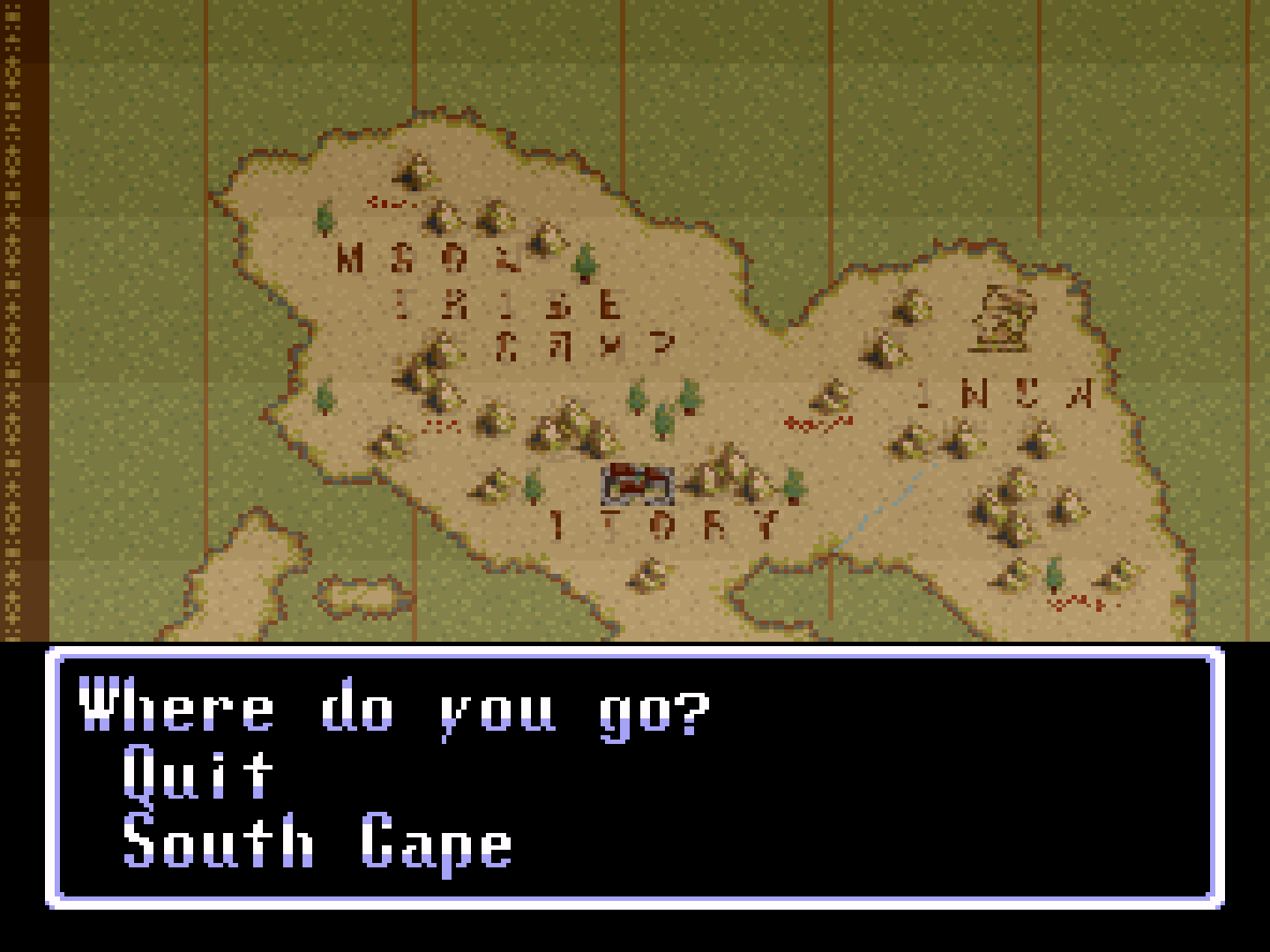 I climb up the stone steps north, on top of where old ruins are. 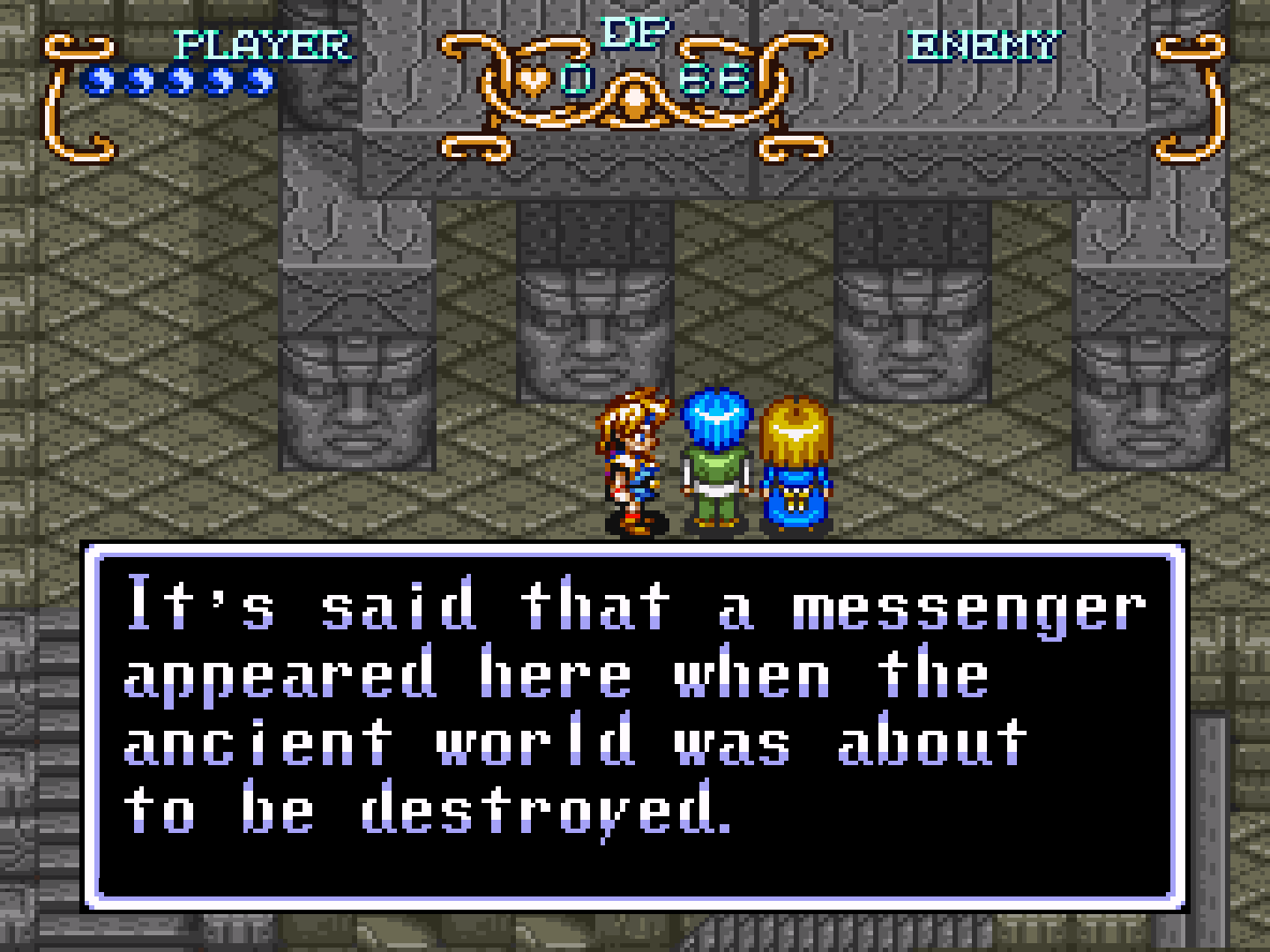 Up ahead, we see another doorway to Dark Space, covered by the ruins' pillars.

A guy tells us to keep running down the steep stone slide here. 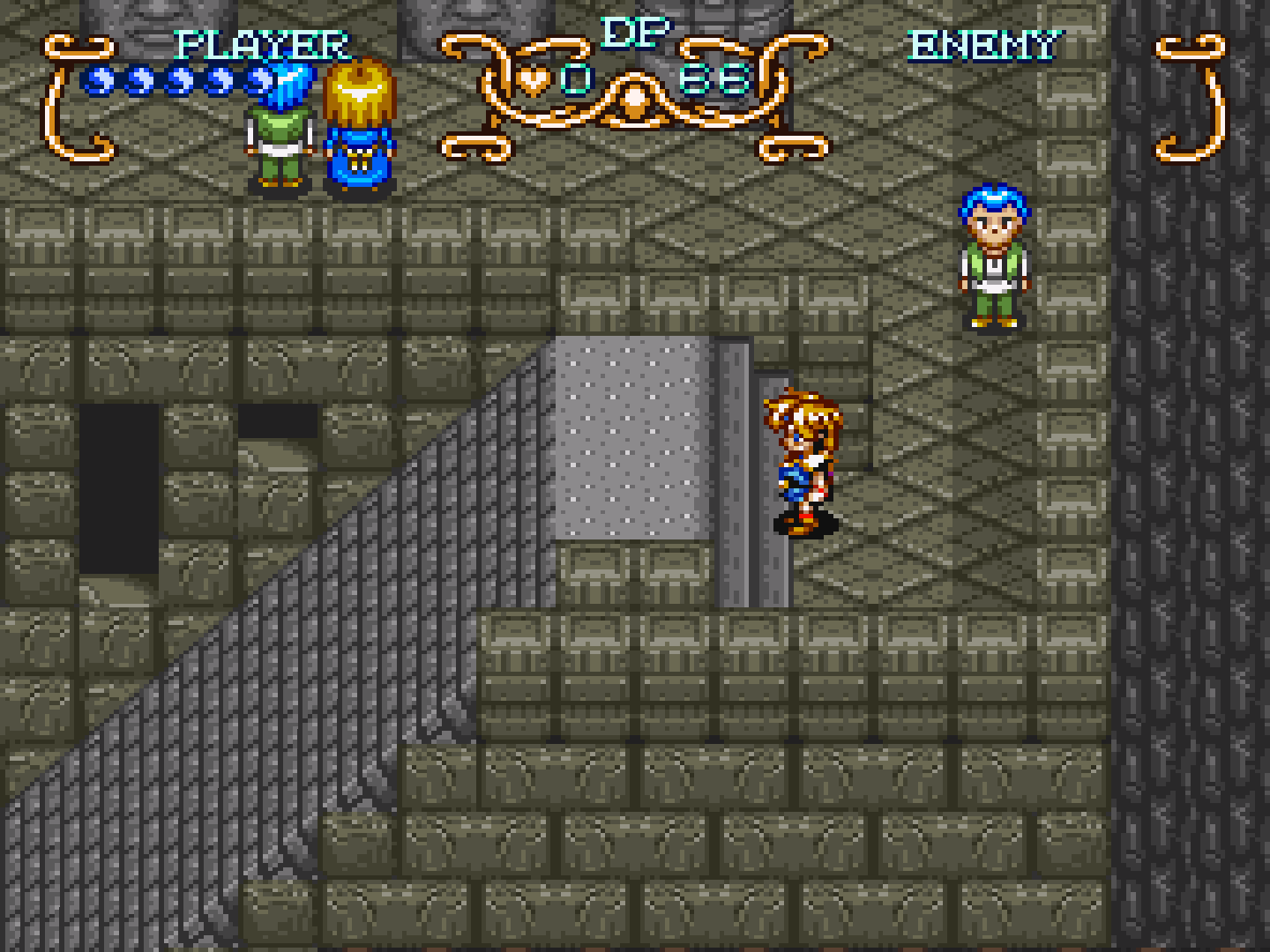 We fly all the way to the other side, where we're now at a graveyard! 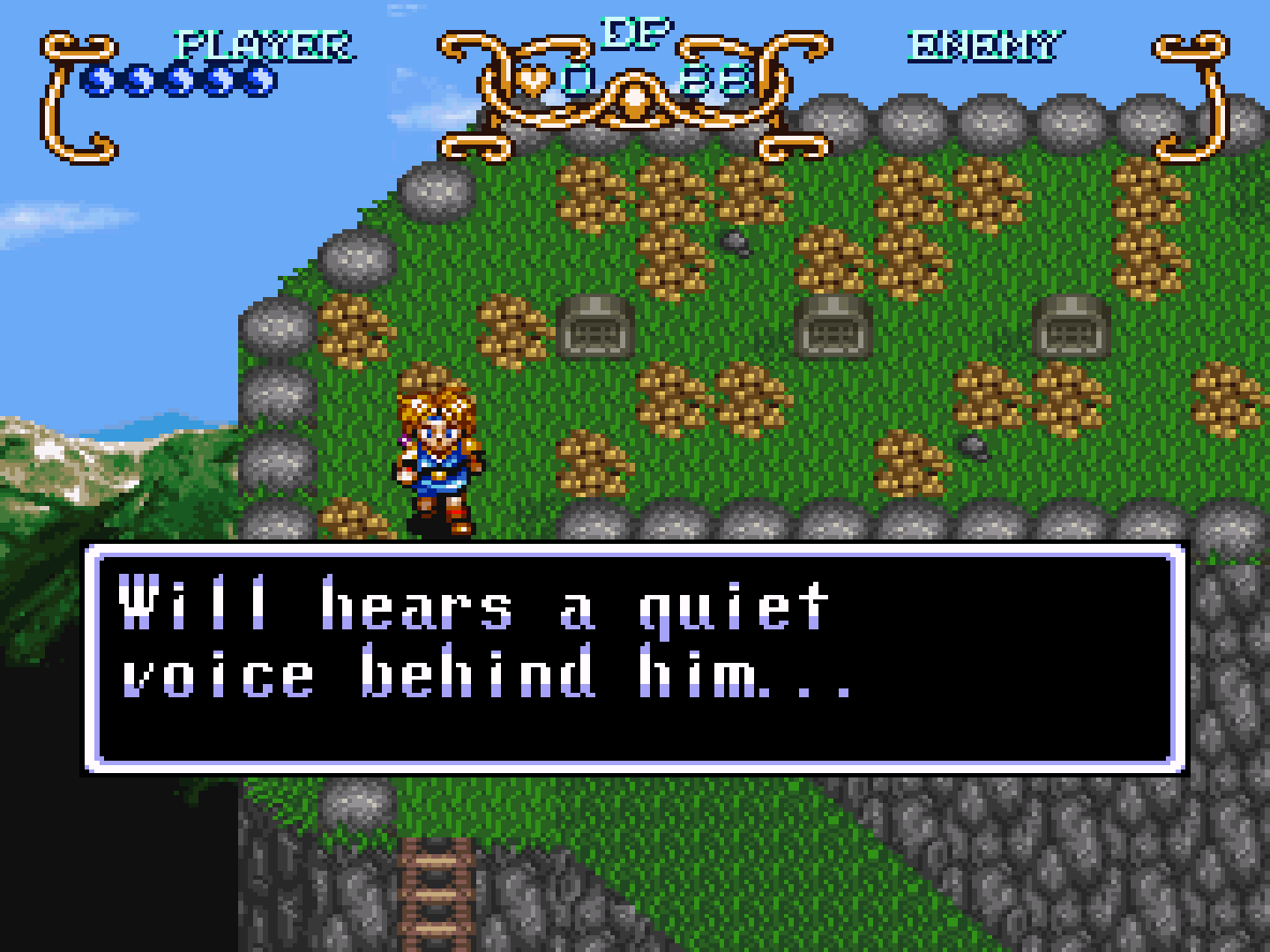 We ignore the voice and make it back to the village!

Inside a house, one man tells us about people making their way to the ruins looking for Incan gold, saying that no one ever made it out of there.

A woman shares my opinion on these invaders. 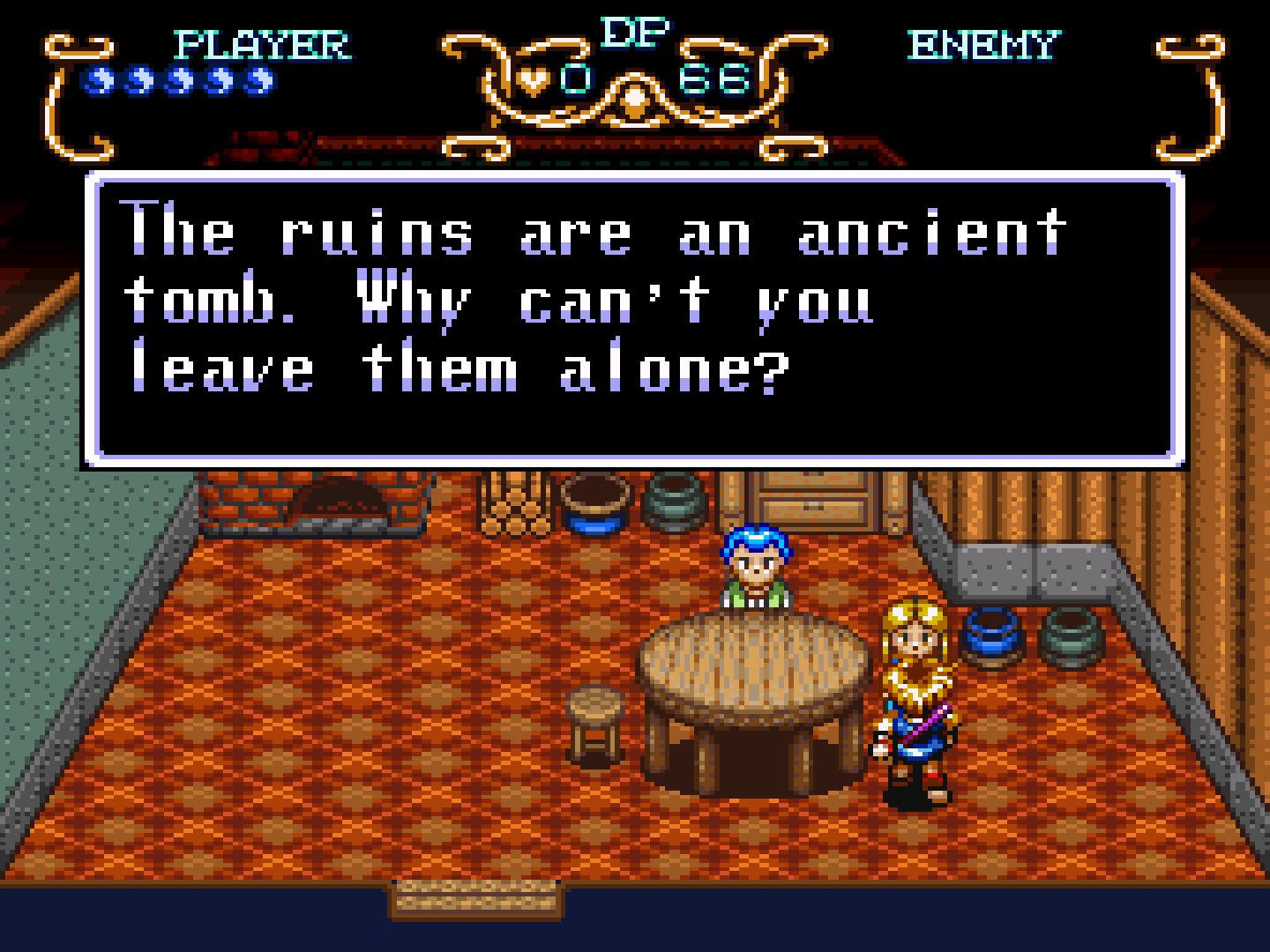 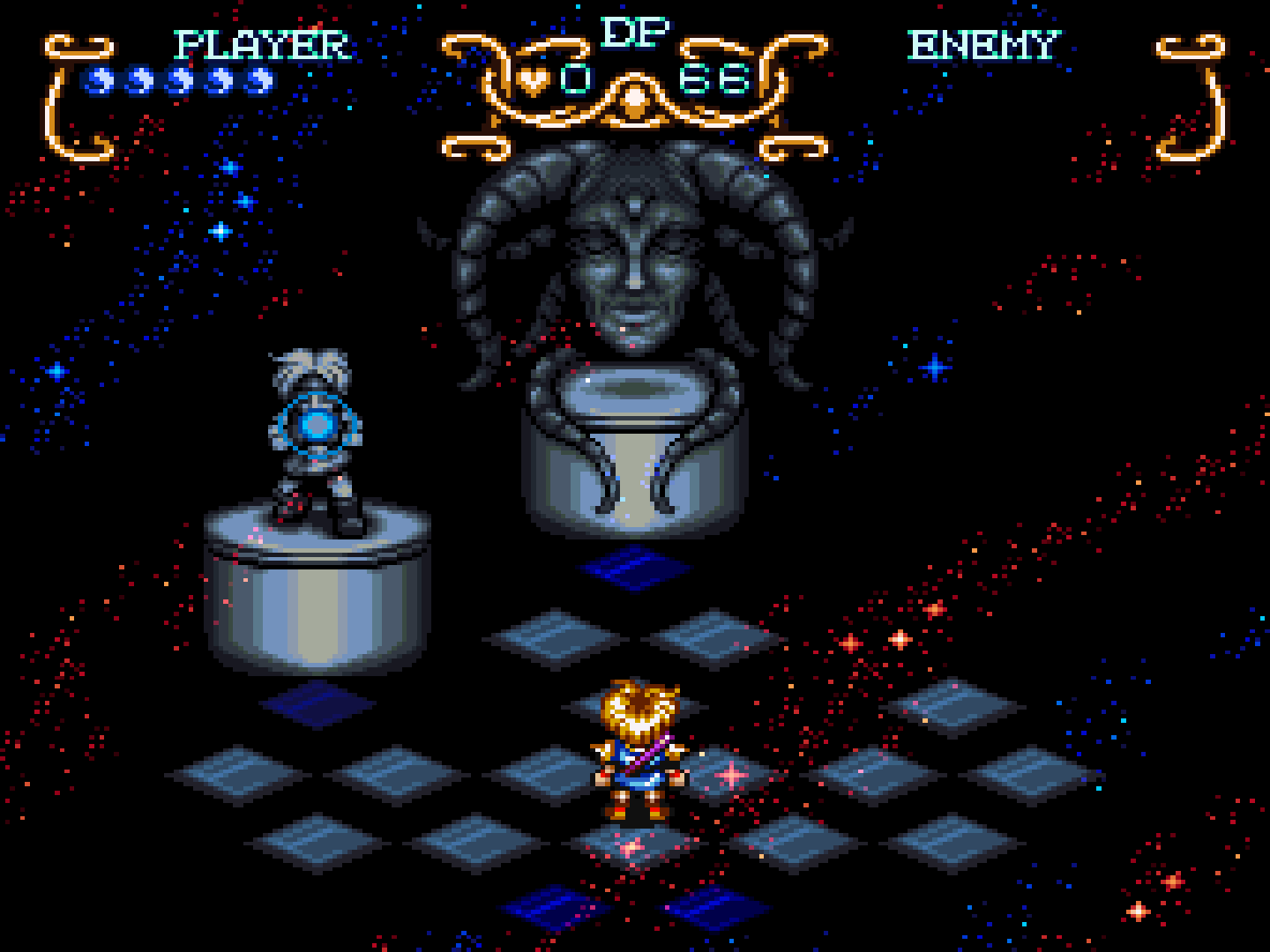 Gaia gives out more advice about Will's newfound power, which "can destroy obstacles."

Gaia: "Always be alert. If you find a suspicious place, try to destroy it."

I have Will go to the statue of himself, where he gains a new power: the Psycho Dash!

Gaia explains Will's new power. In a way, it's basically a speed tackle. 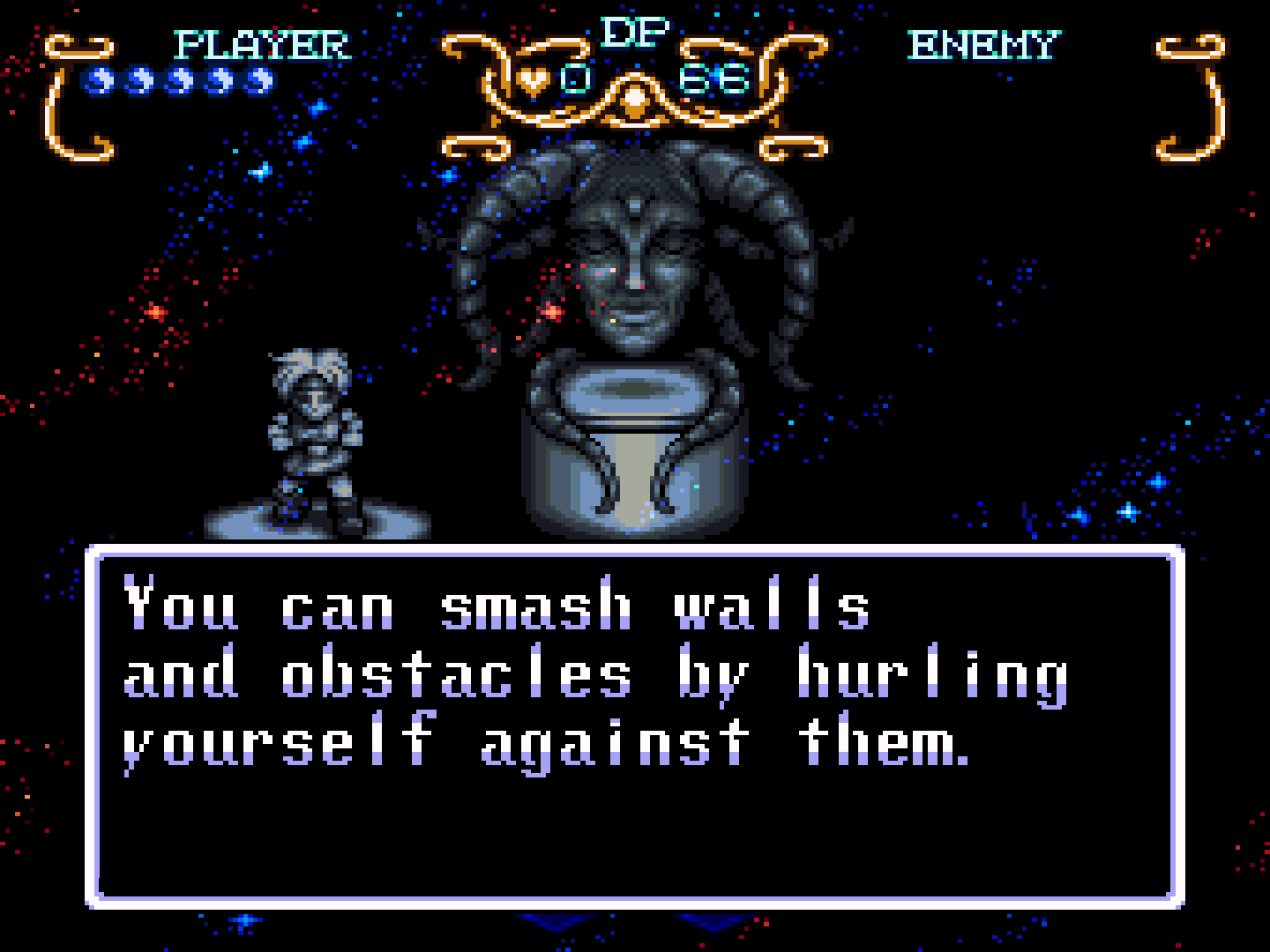 I have Will go back out and make a running leap to the graveyard to take this screencap. 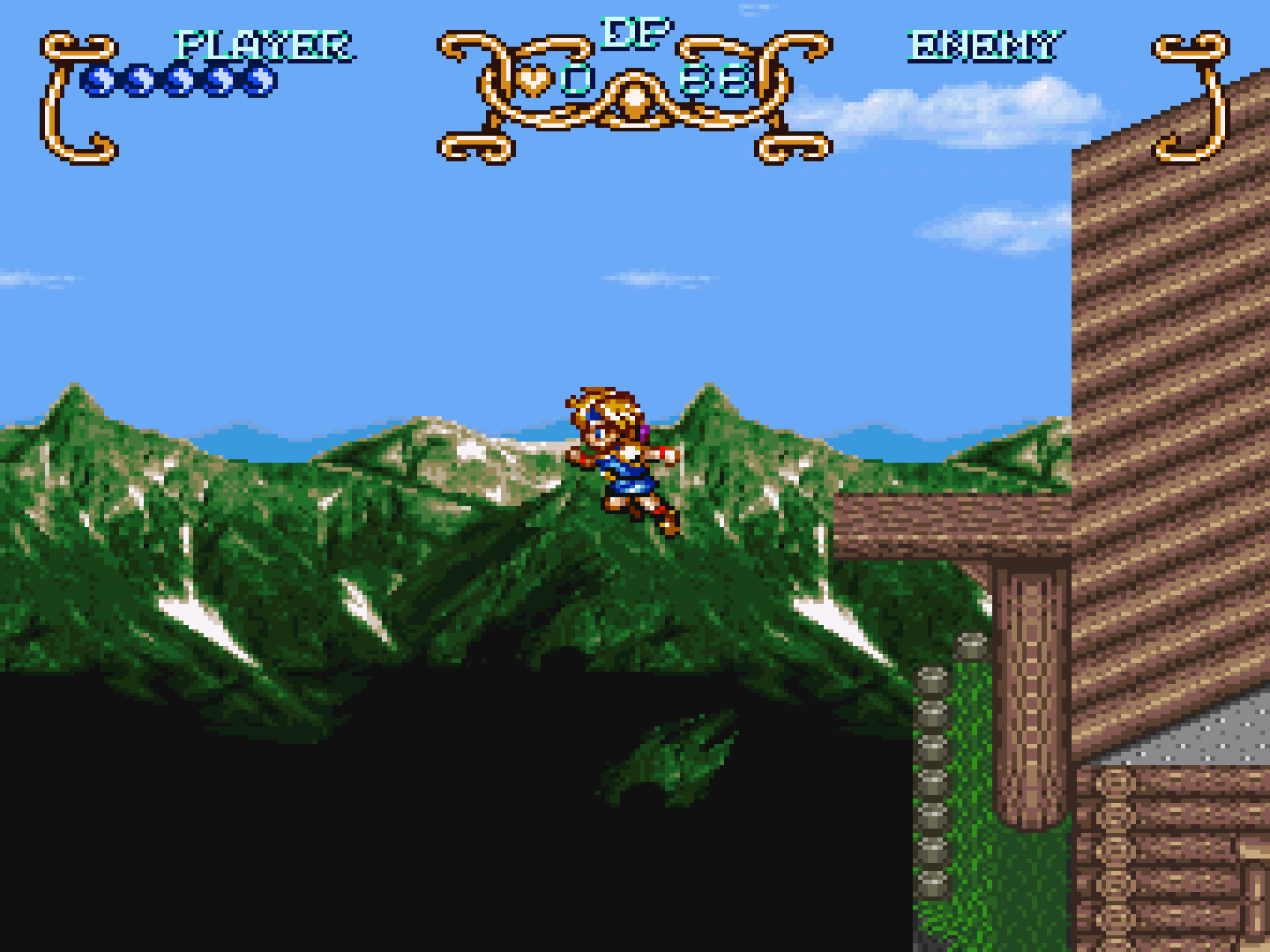 At the graveyard, there seems to be an apparition above the center grave. 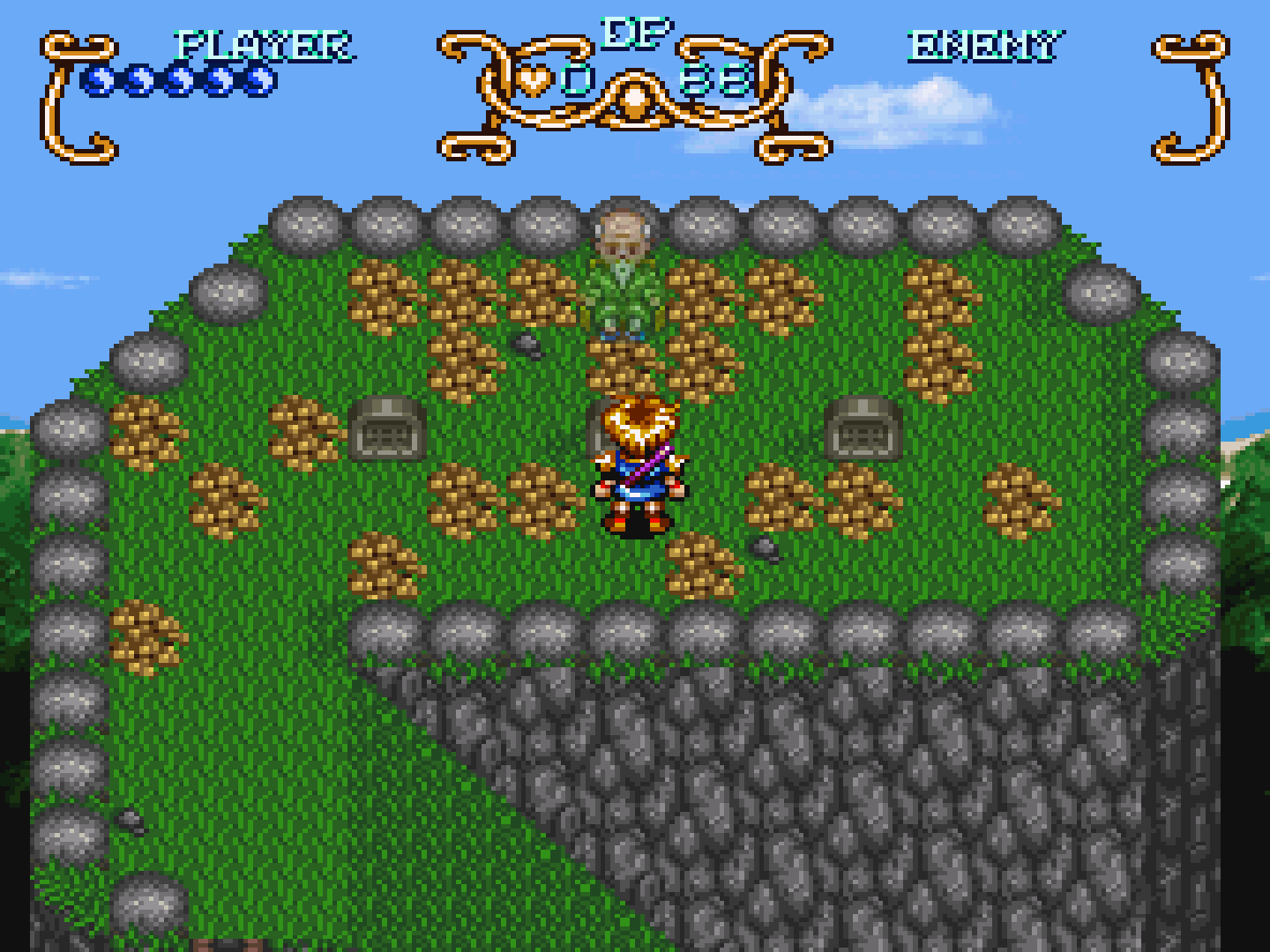 I have Will ignore him and climb the ladder down to a cave.

What could be in there? 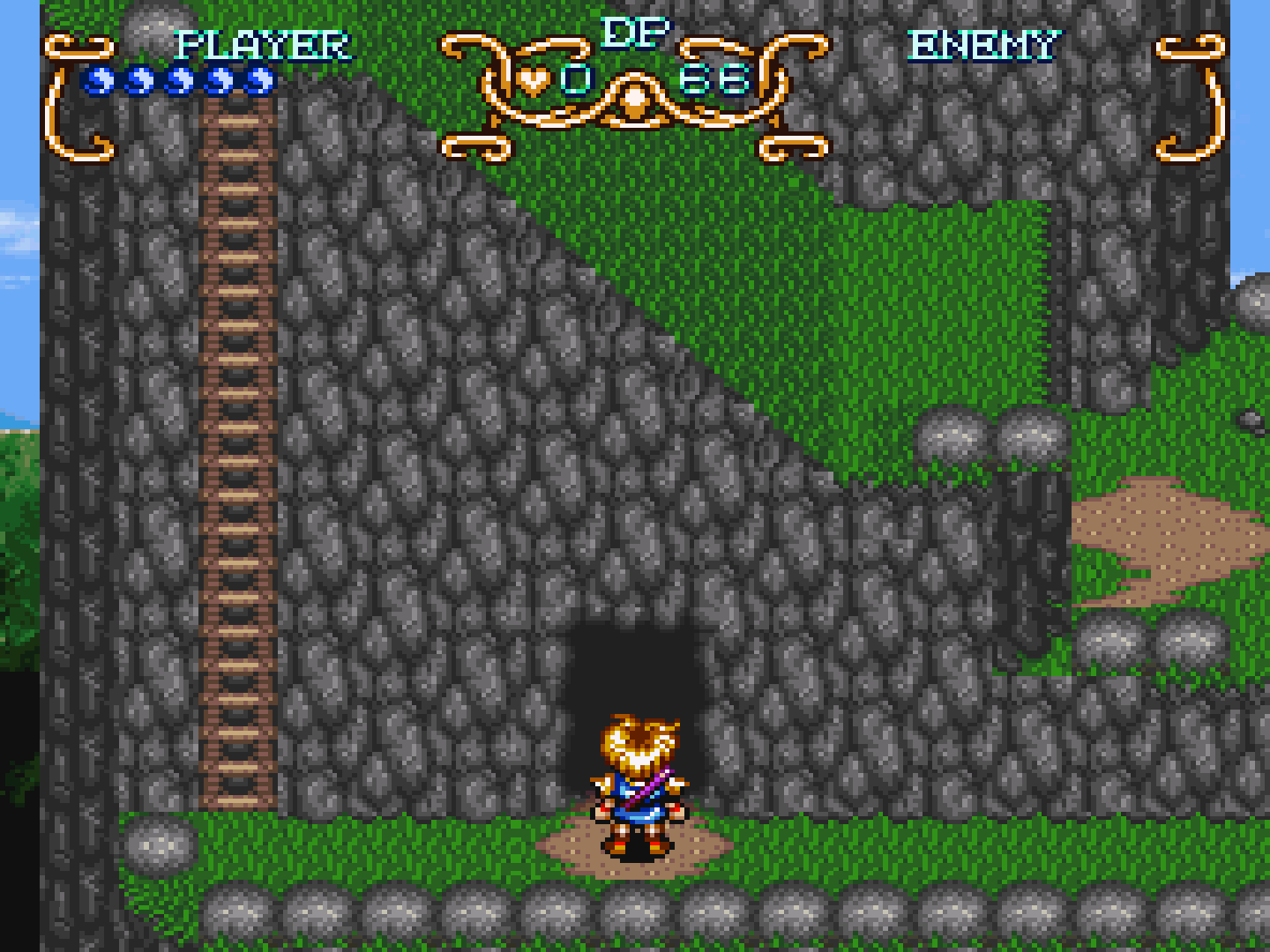 Inside the cave are some unlit braziers. Nothing here so far. 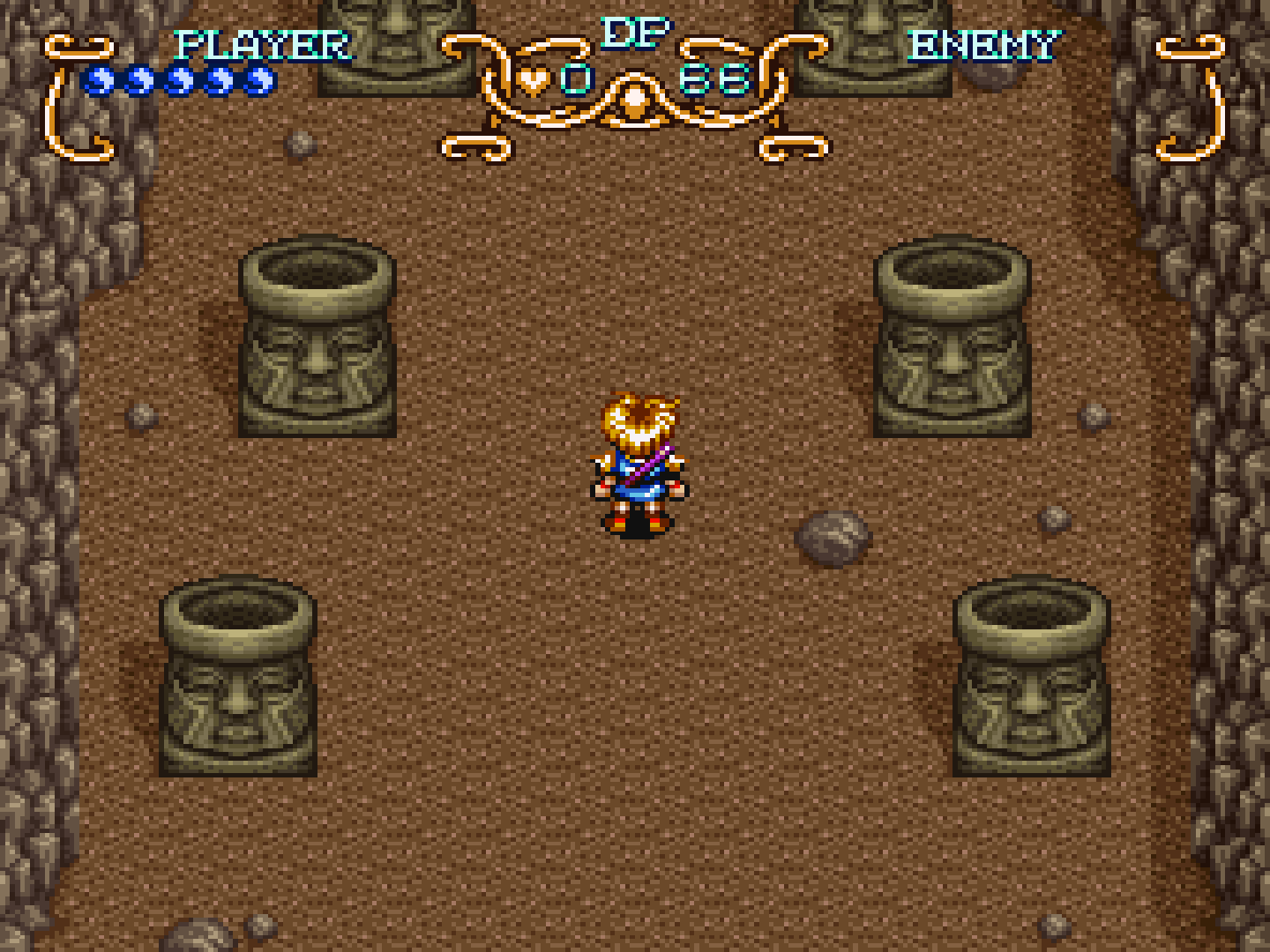 I go back up, where I talk to the apparition, the Elder's ghost. 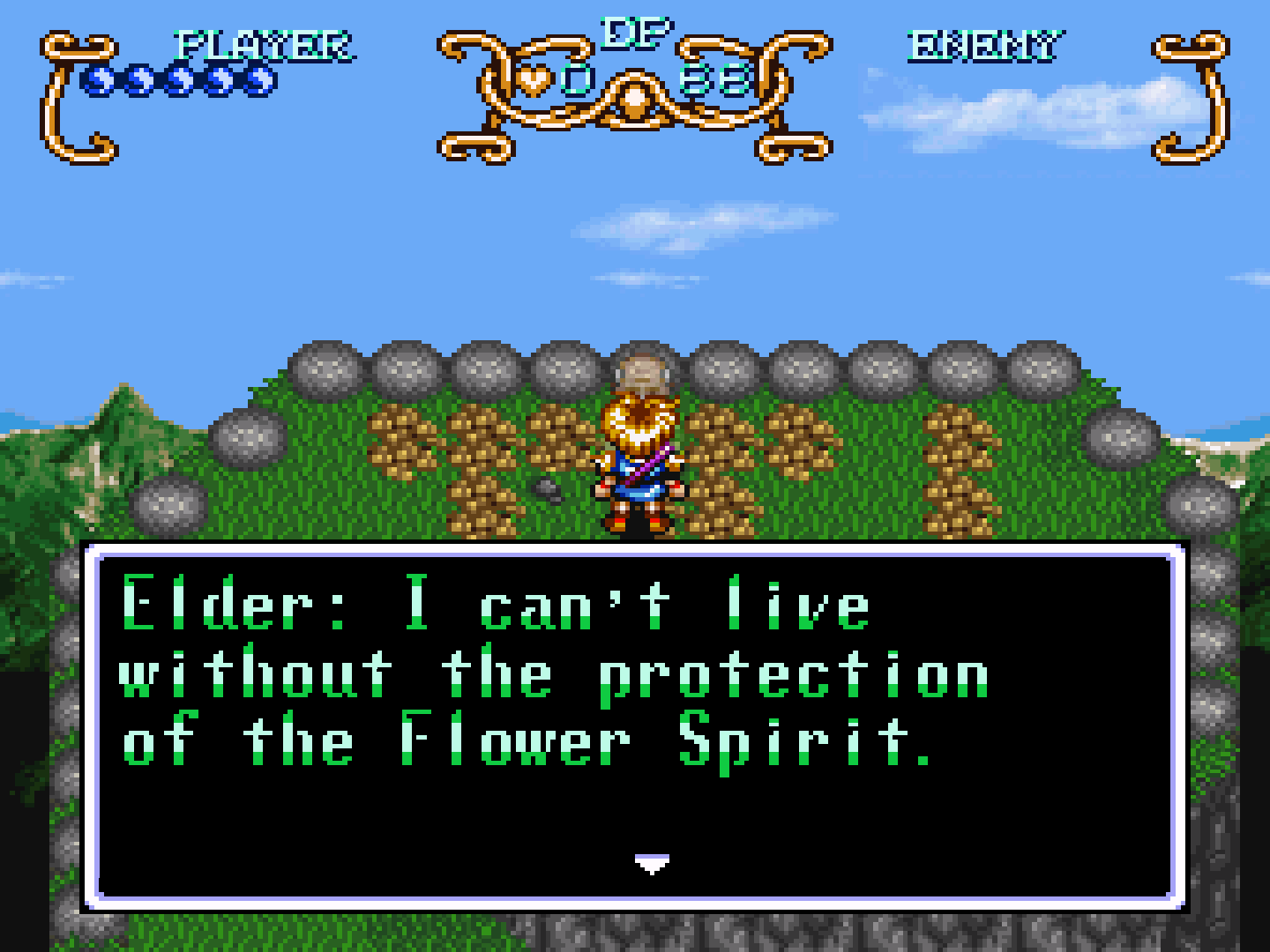 The Elder changes the subject.

Elder: "You really look like your father. It seems like only yesterday that he came to this village."
Will: "My father..."

The Elder brings up Will's mother, Shira, next. 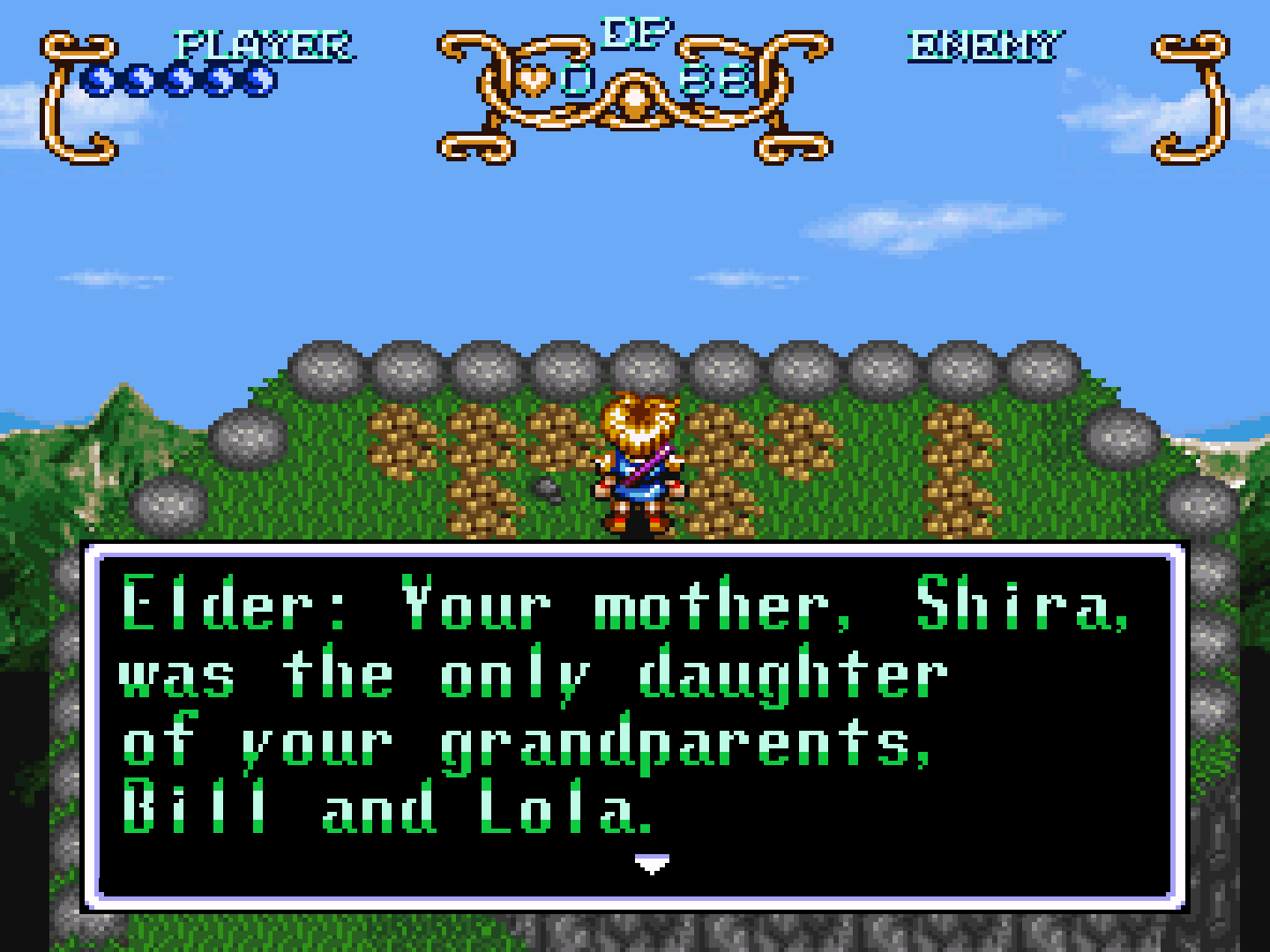 Elder: "Your father fell in love with her and took her from the village. All of the Itory tribe have a strange power but Shira's was especially strong. She made a barrier to hide the town, but your father came through that easily." 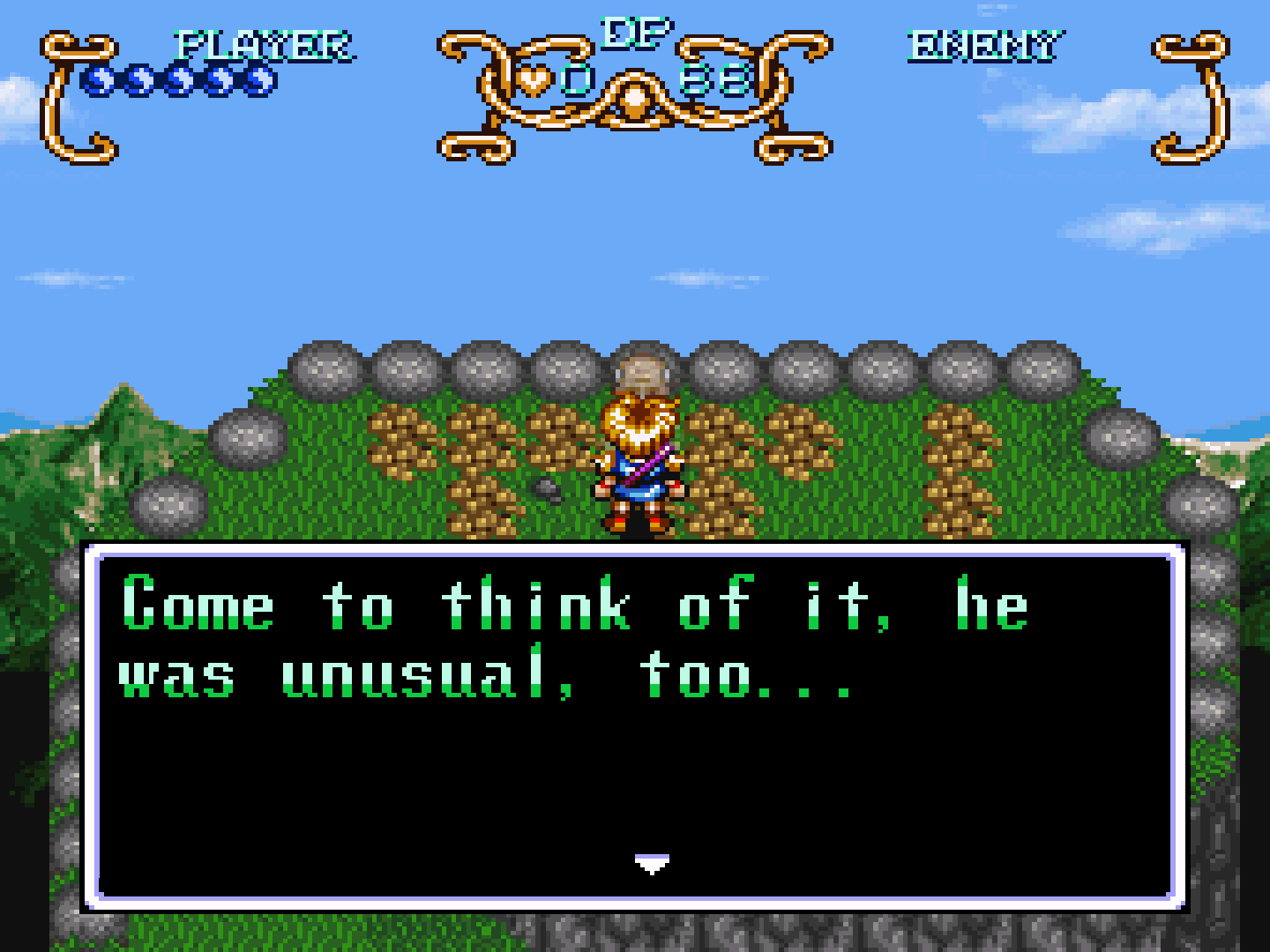 Now I'm getting more interested in who Will's father, Olman, is. If he can cross through the barrier, what kind of power does he possess?

The Elder asks Will if he was "summoned by his father." I answer yes. 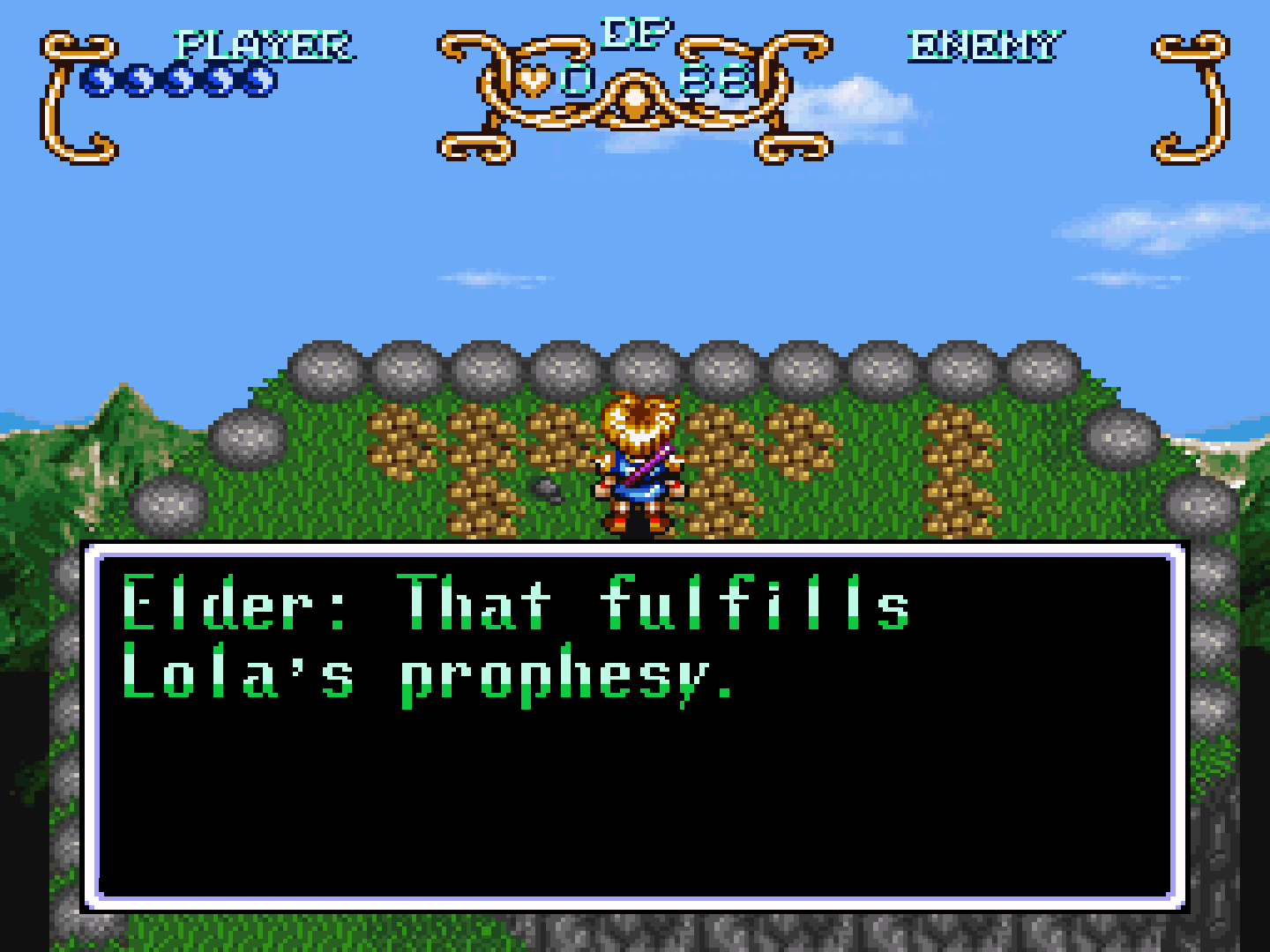 A prophecy? What did Grandma Grandma predict?

He asks us if we're going. Going to the Incan Ruins, I'm guessing.

The Elder gives us an Incan Statue, the key to open the ruin. 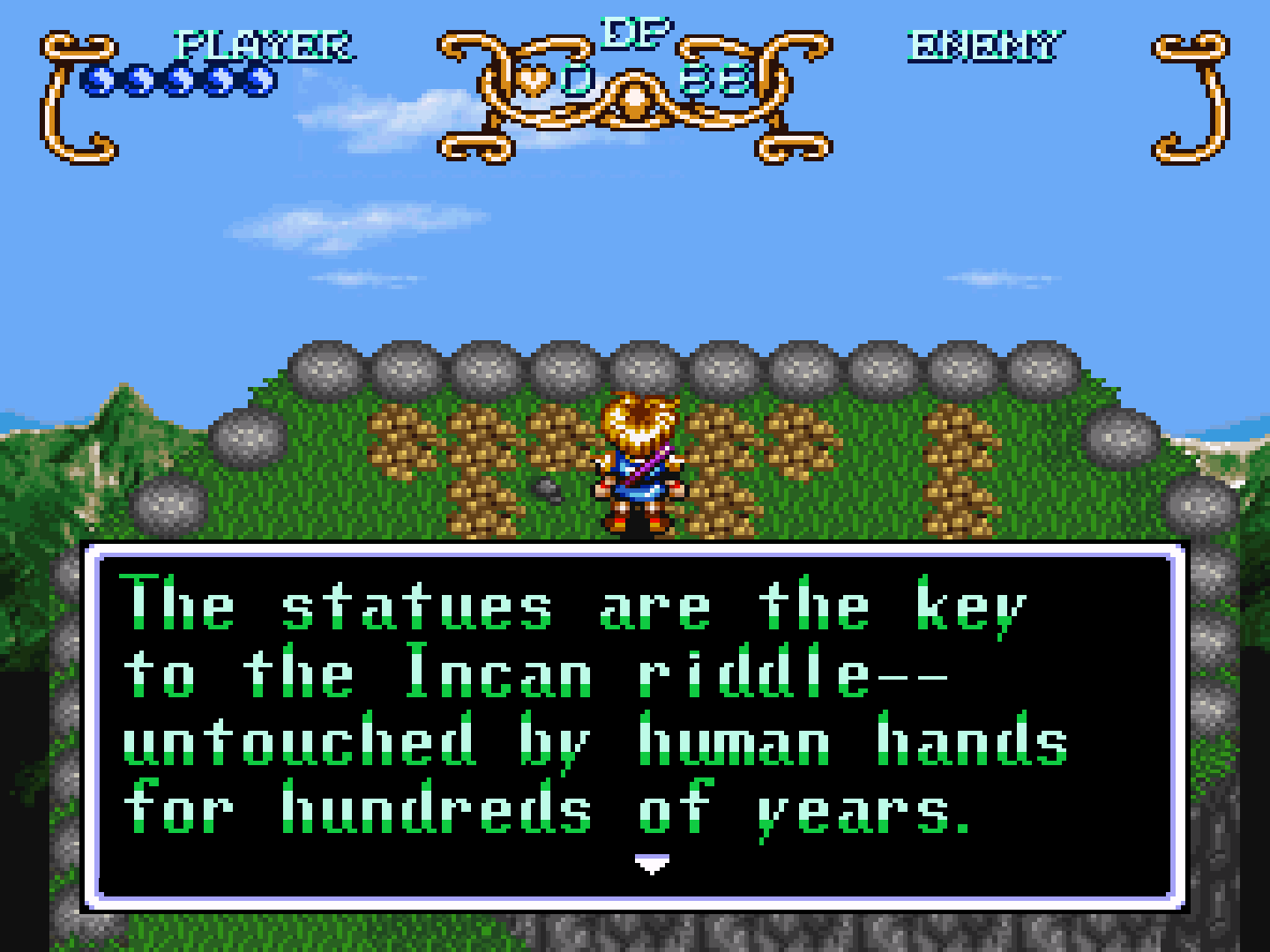 Elder: "One statue is enshrined in the cave below. Use all your skill to find it."

So he's not handing the statue to us directly, but giving us the way to get it.

Back to the village we go!

I check the menu, and the Dash we received from Dark Space is there!

I save and go to Lilly's house. 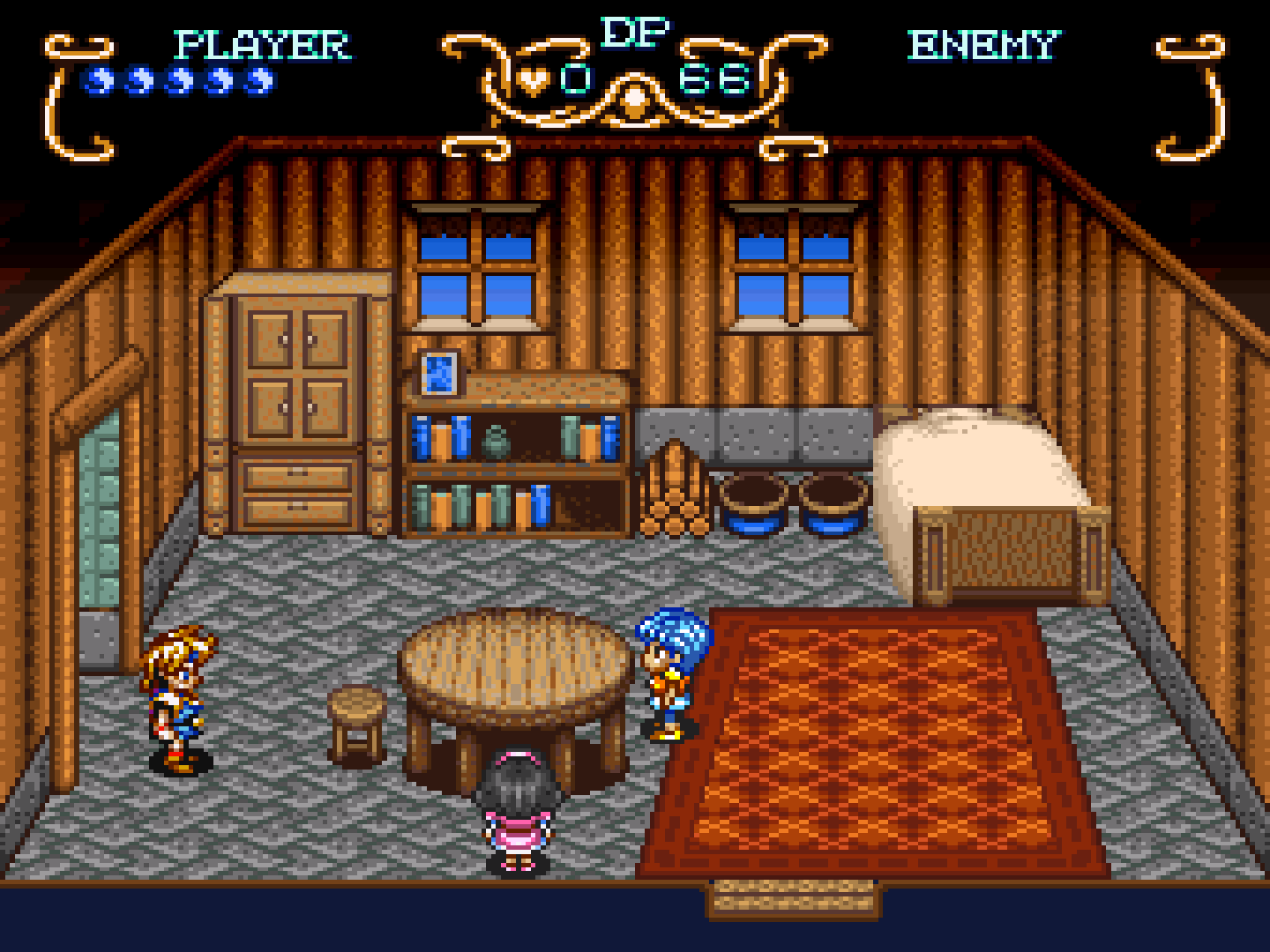 Lilly's a bit surprised by our visit to the Elder's grave. 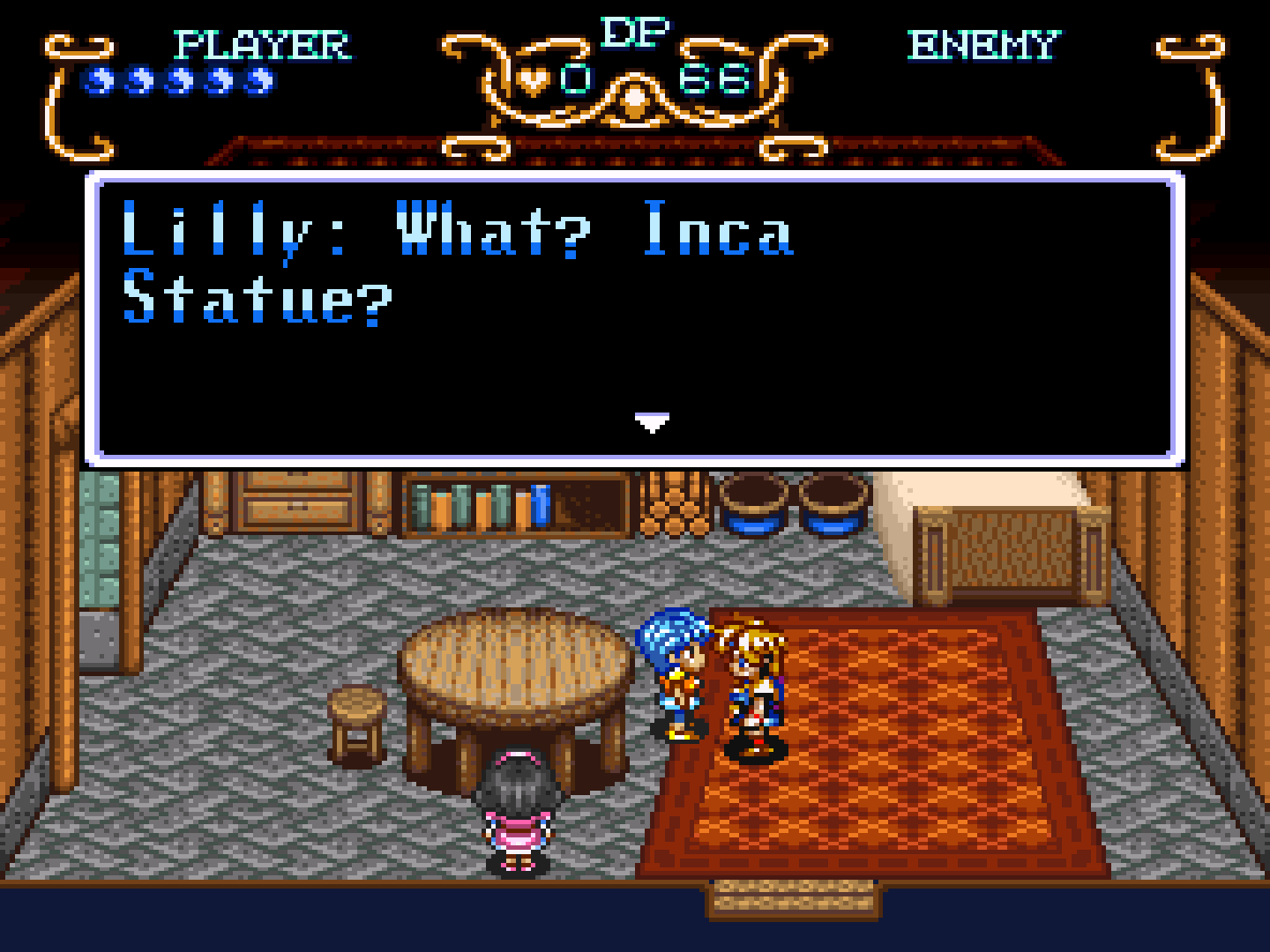 She mentions the Incan Statue located in the cave below the graveyard. Lilly then gives us a hint about how to access the cave. 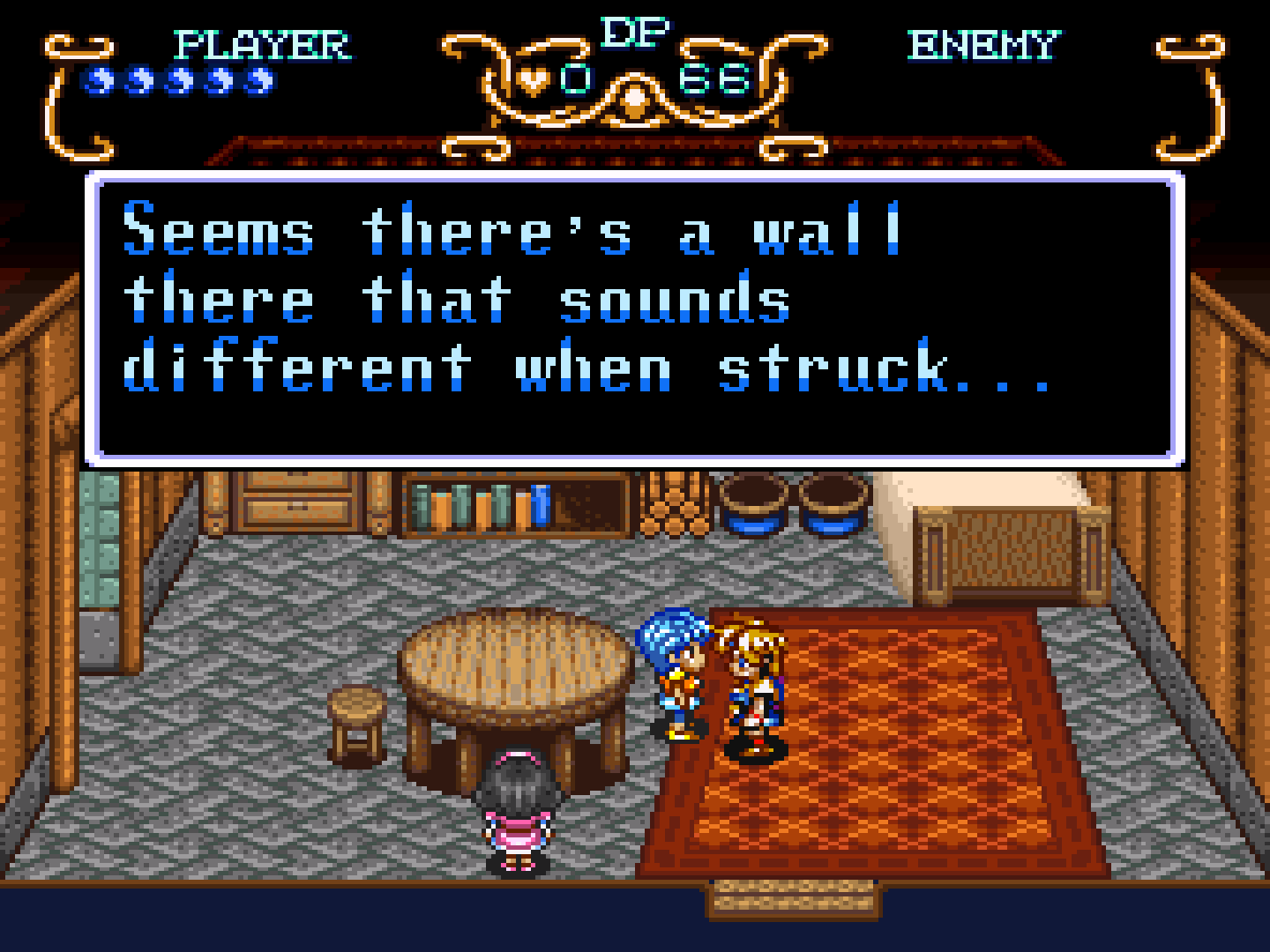 Lucky Will has that Dash power from Gaia.

Kara likes the breeziness of Itory. I wish she could actually help Will though...

I talk to Grandpa Bill, who mentions our trip in prison. 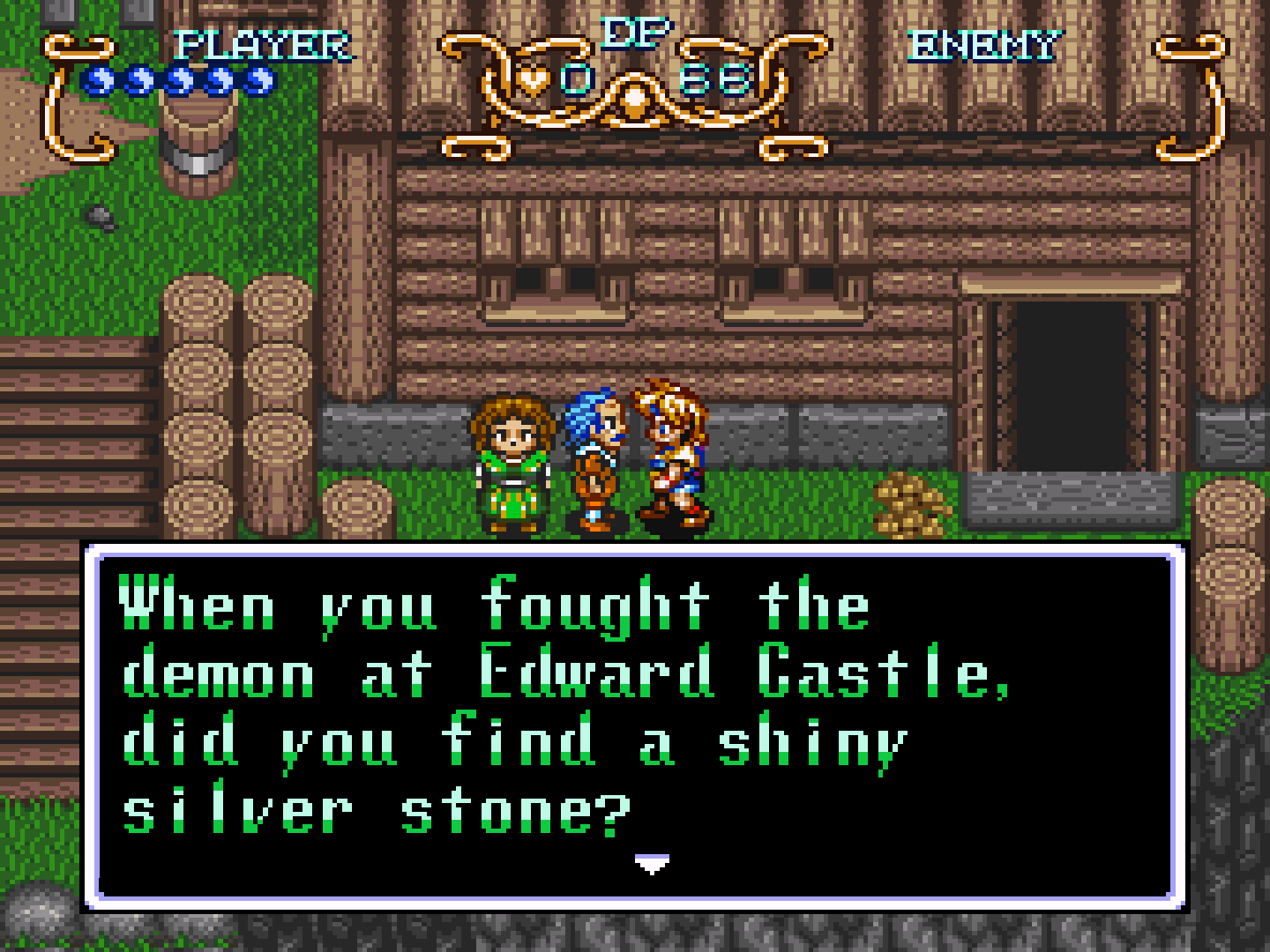 Bill: "There's a strange power in that stone. Even if defeated by an enemy, if you have 100 of them, you will live again."

So that explains the heart indicator on the HUD below the player. It's basically the number of lives Will has left before he has to go to the start of a level.

Grandma Grandma mentions her prophecy to us. 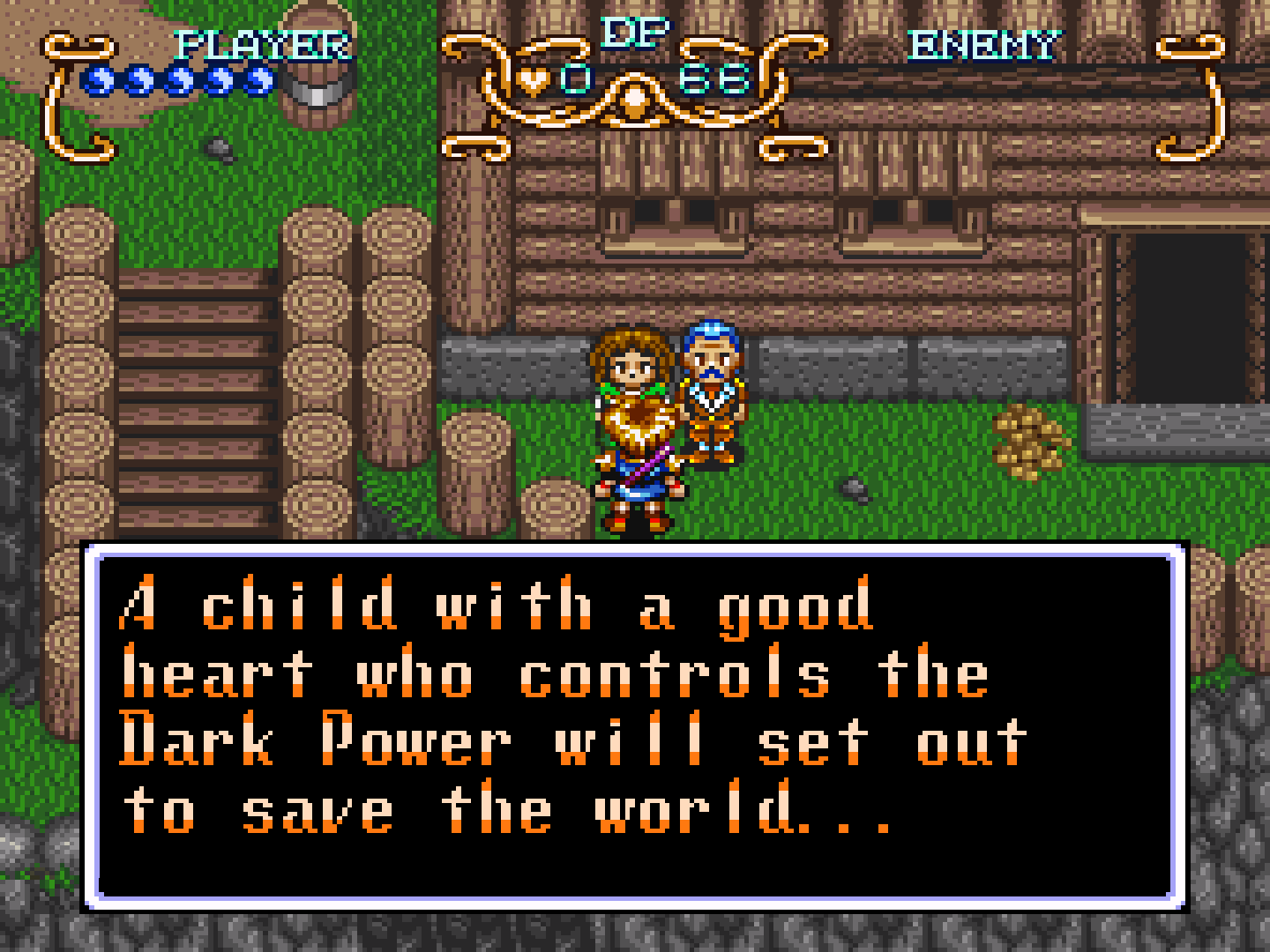 Grandma: "A child with a good heart who controls the Dark Power will set out to save the world... At that time, a huge comet will enter Earth's orbit, and a Dark Power will arise..."

Here's the theme for Itory Village. It's a pretty relaxing tune.