Velvet: "We're looking for prickleboars. Keep your eyes on the thickets."

I wonder why we can't go to the Tranquil Woods, though...

We find prickleboars, but they're easy to take care of...

After we take care of three waves of prickleboars in different parts of the wood, we return...

Magilou's smiling. She knows what's up.

Phi and Eleanor mourn for the prickleboars.

Velvet moves on, though.

Magilou: "...Yes. What can you do in this situation indeed."

Another skit: Phi points out who Velvet was before that night. Eleanor knows it too, and she brings up the small, happy times after what happened to her village. Then Bienfu comes in...

Bienfu picks up after his master, doesn't he?

Bienfu thinks Velvet might've had a past lover...I don't think so.

More villagers apologize to Velvet about the Shepherd. One of them tells us a doctor's about to come look at Laphi.

Our expedition crew's back and Phi gets new swimwear!

Rokurou and Eizen are at the cabin. They ask what their next move is.

So the Tranquil Woods and the shrine beyond are "off-limits" according to the Abbey. There's definitely a therion in Eastgand. Speaking of which, where did those two dogs go?

Eizen decides to bait the therion.

Eizen: "Either way, this place is about to get a lot less tranquil."

Eizen: "You can quit here if you like, but I'm going to keep on fighting the Abbey." I'd keep on going too.
Velvet: "And if I try to stop you...you'll insist, I presume." 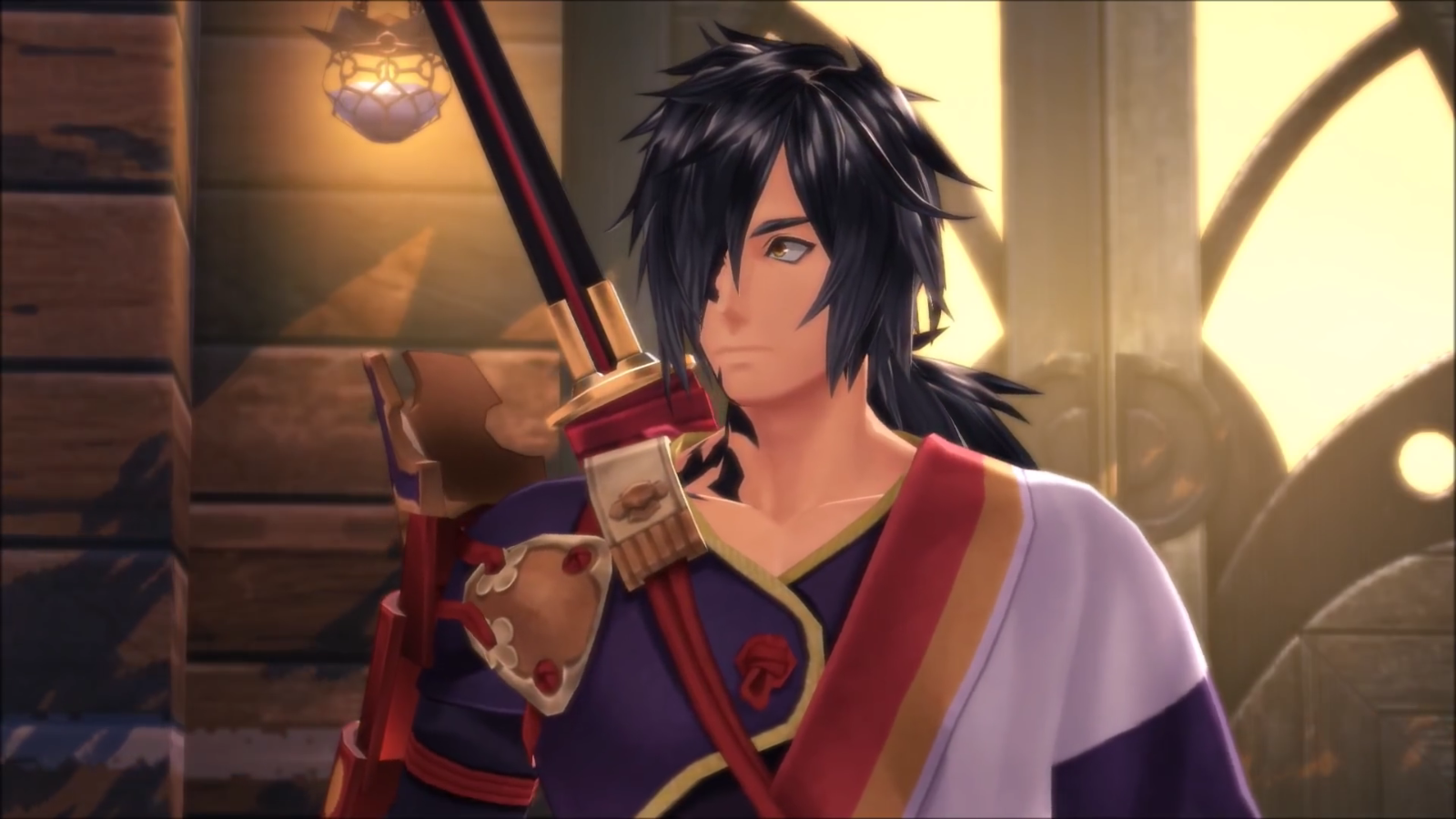 Velvet pulls out her therion arm!

Eizen walks away, and heads off to the shrine at the cape, giving Velvet a day to think about it.

Rokurou walks off too.

Velvet: "Tomorrow, I'll fix you up a nice stew."

Phi looks away, but sees something!

It's a copy of the tome we found in the villa! An original one with all of its pages there!

Velvet: "He wanted a compass...more than anything else. Just like you, he loved to stare out at the sea wondering what's on the other side. He wanted to go adventuring some day."

Phi has some food on his cheek.

Phi: "Oh... I didn't know that."
Velvet: "I bet once he wakes up, you two will be really good friends."
Phi: "So this is what your life used to be like before everything happened, huh?"

Velvet cleans off the pudding off of Phi's face and tastes it...it's a "bit too sweet." Oh god, she can taste!? She rises!

Velvet slams the table and asks Magilou about "artes that manipulate dreams."

Magilou: "There is [...] an arte that requires a certain type of malak. It envelops you in a fog and reads your regrets, then traps you in a happy dream." I knew it!

Velvet: "An arte that reads your regrets...and shows you happiness."

Velvet heads off to the cape. Oh god, yes! Get out of that spell!

Oh no, Laphi's woken up!

Velvet: "This is Phi's compass."

She looks away, her voice softer.

Eleanor: "Fog? Is this what Magilou was talking about?"
Velvet: "We're going to the cape shrine! It's time to drag out the therion." Good ol' vengeful Velvet's back again!

Rokurou and Eizen are blocked by the townspeople from passing.

Niko tells Velvet to "stop her friends" from heading to the cape.

Velvet: "I hate to say it [...] but I think I'm a terrible person. I really thought I could have my old life back again, and I could forget everything else. I tried to act like I was doing it for Laphi, but it was all for myself. But I can't forget. I shouldn't forget. Laphi is dead. He was murdered without even knowing why! I will never forgive that... ever!"

And the villagers have become their true selves: daemons!

Velvet: "There we go! The truth at last!"

Velvet: "Out of my way!"
Magilou: "Well, color me surprised! I didn't think you'd actually tough it out!"
Eleanor: "What are you talking about?"
Magilou: "Focus on the monsters..."

To cap it off, I finish off the last of them with Velvet's Mystic Arte!

Velvet runs to the gate!

Rokurou: "Hey, mind telling me what the hell's going on?"
Magilou: "It's a trap. Trap trap trap. Our enemy spun an illusion based on Velvet's dreams."
Eizen: "That's a nasty little arte." That's an understatement.

Eleanor: "But, even if it's all a dream, such brutality on her part."
Magilou: "Eh, Velvet's always been our Brutal Poodle. But to shake off the dream by herself...now that's something. The boundary between dreams and reality is demarcated solely by one's own heart... I'm saying she's wowie-zowie cool-beans. C'mon, we gotta hurry!"

Magilou, you know something, don't you? I can't also shake the fact that you and Melchior have a history.