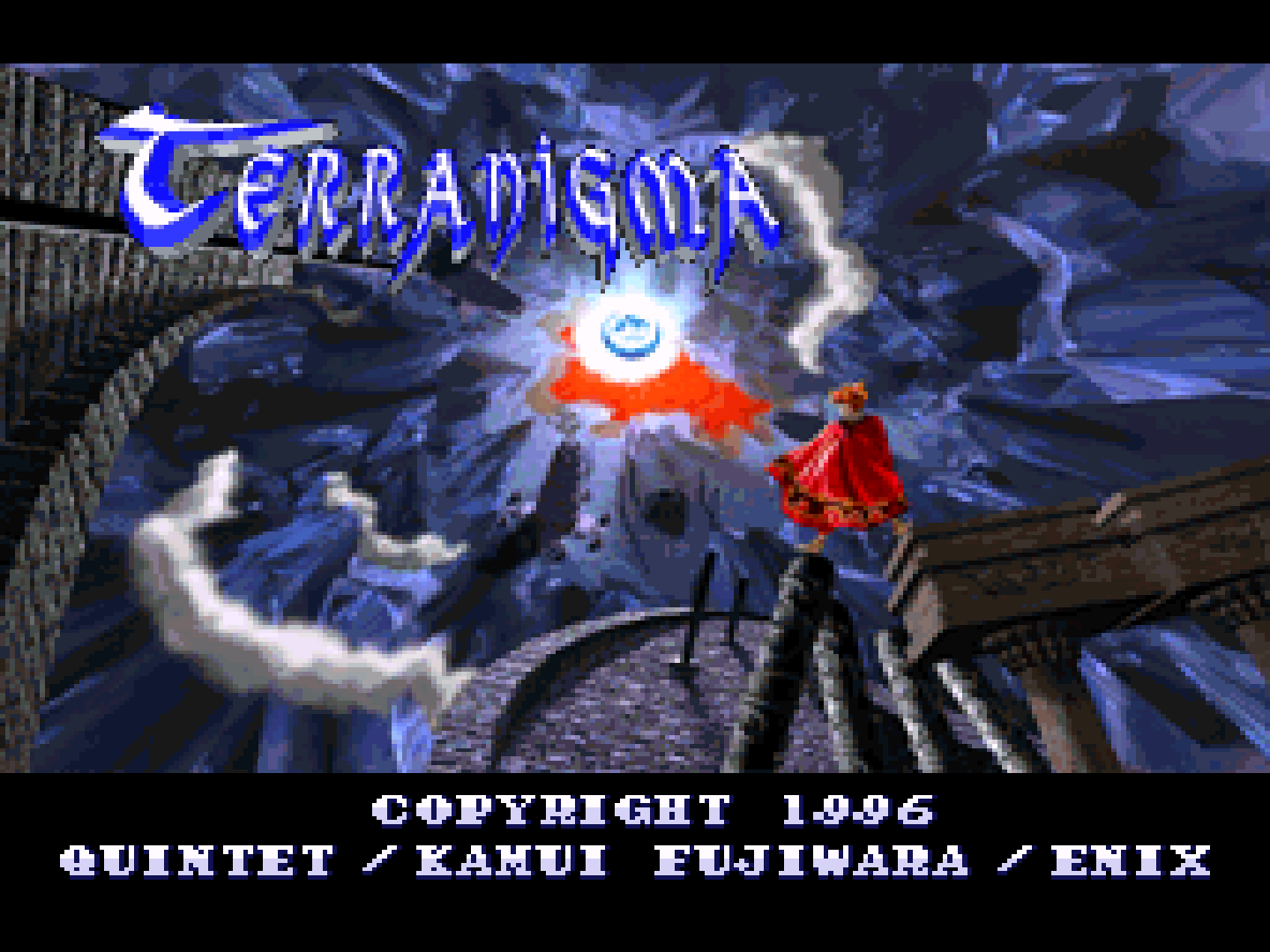 From the title screen, I'm guessing that cloth the Elder commissioned Elle to weave was not for him, but for Ark.

I wander around the Elder's room. He's not back.

I try to go outside, but at the entrance room, the Elder's waiting. 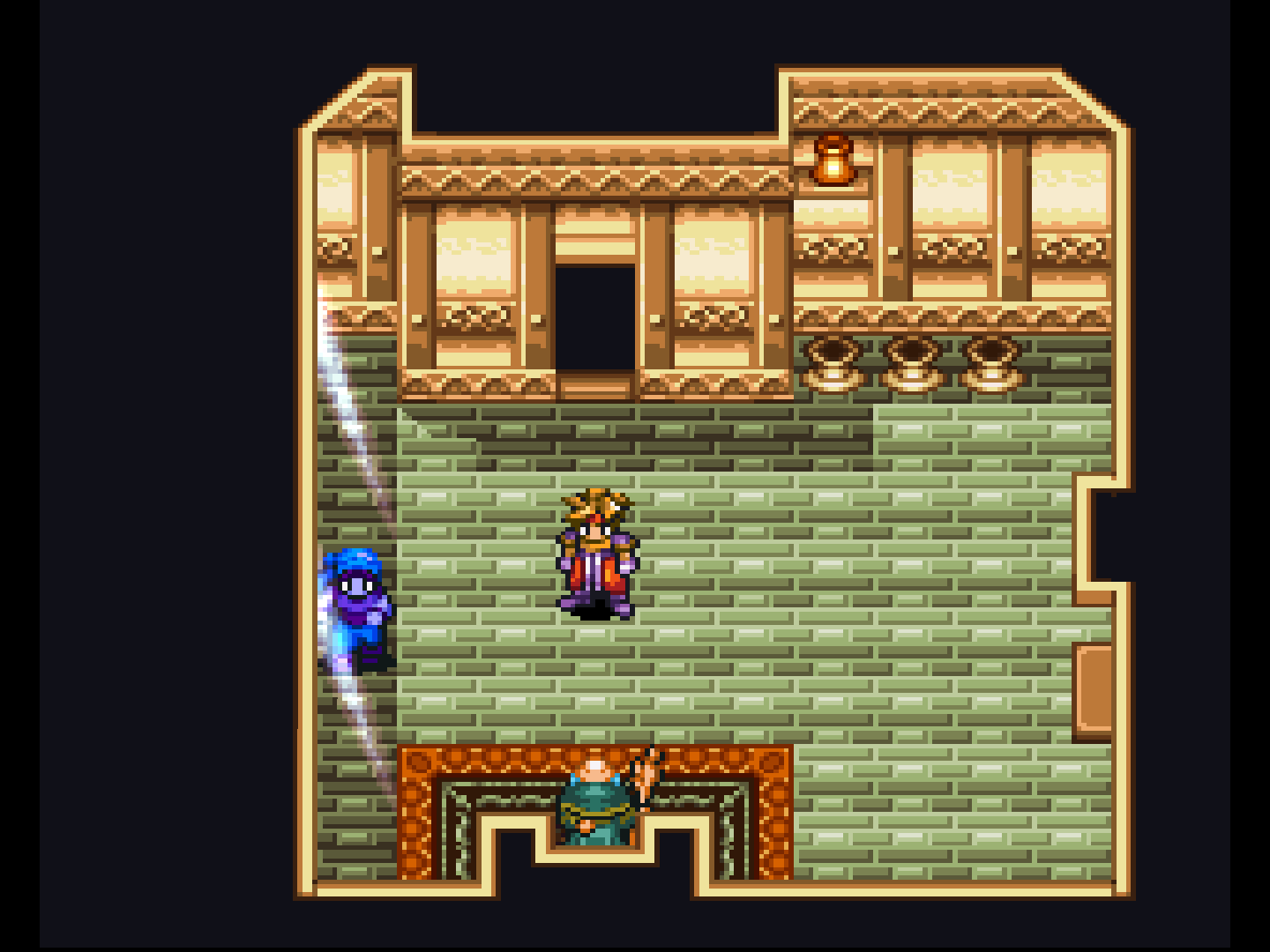 Ark demands an explanation. The Elder calls him an "enormous fool." What did we do? He blames Ark for opening the blue door. 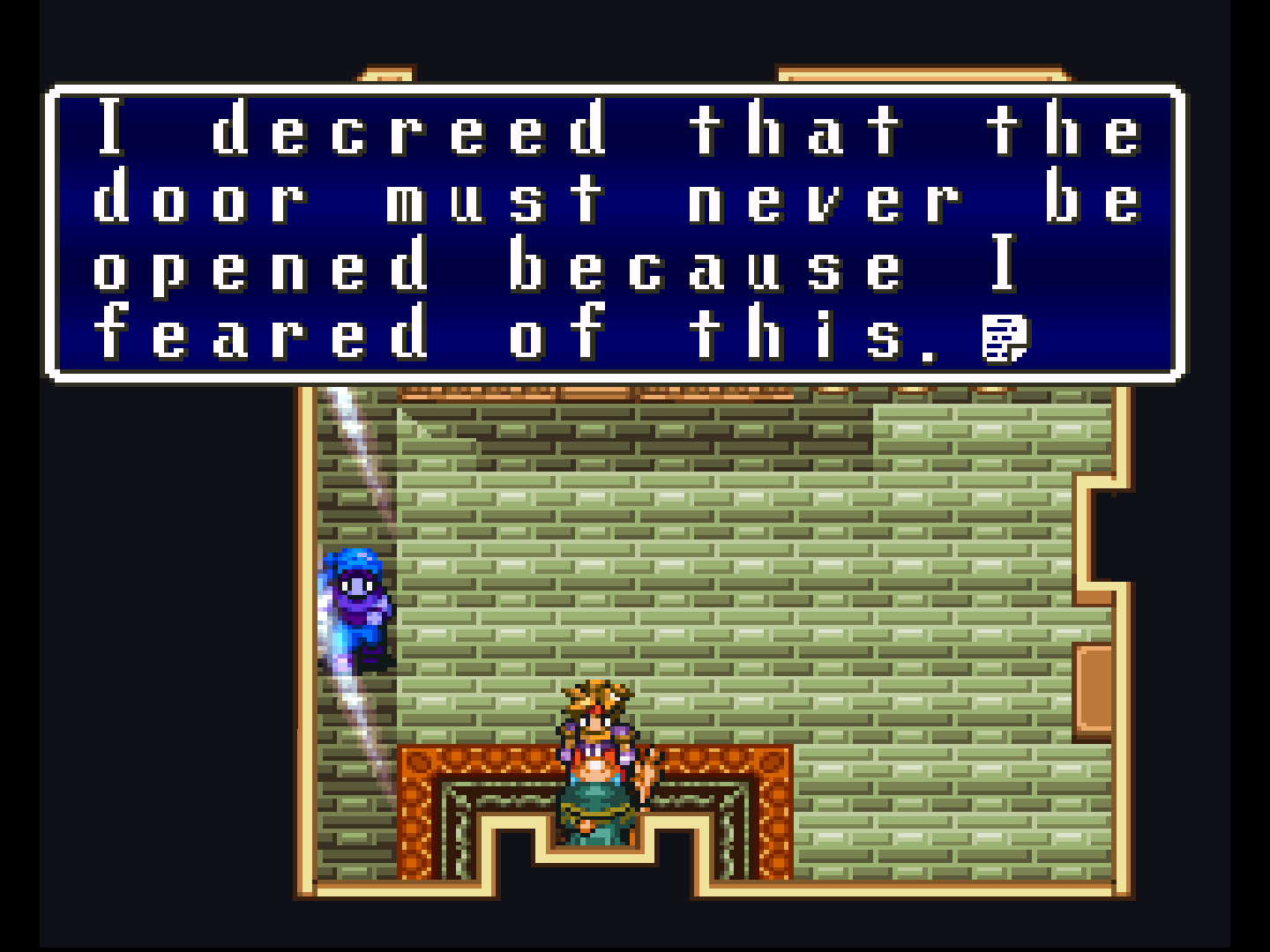 He asks Ark if he wants to turn them back from their frozen state. Yes.

Elder: "So be it. Ark, go out of the village. Five towers await you."

What do those towers represent?

Ark's curious about what's outside the village, and the towers.

Elder: "The gate is open. But have you the ability to succeed?"

He brushes us aside and goes to his quarters.

I have Ark follow him to explain about the towers. 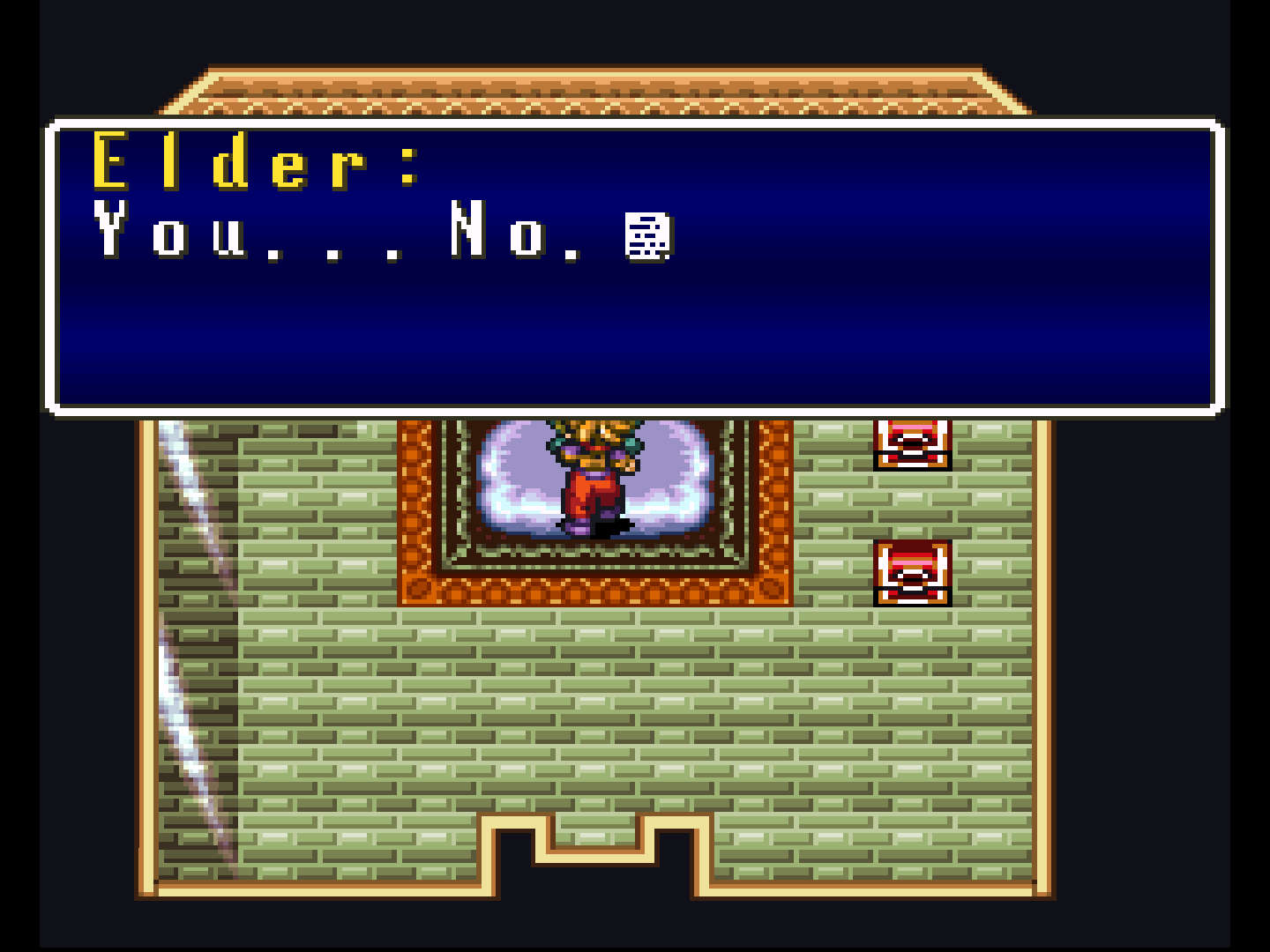 Elder: "No one here has ever set foot outside. Five towers await outside, each one controlling living things. That is all. You must seek the answers in the towers yourself."

I ask about the box next. 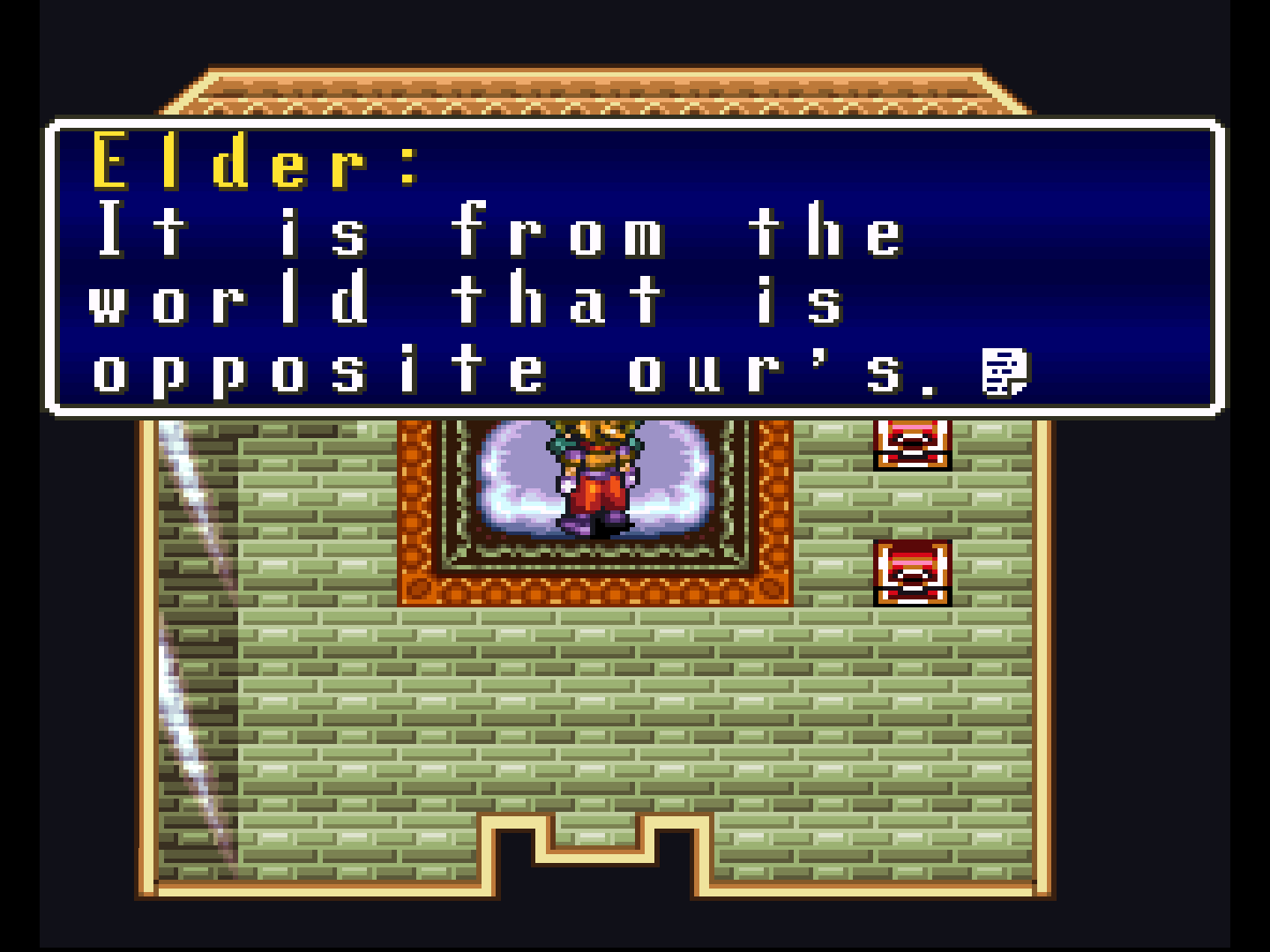 So this game has two worlds, fvzvyne gb Flzcubavn, huh?

Elder: "By freeing [the box], you upset the natural balance of this world..." So that's why he's blaming Ark, all because he broke the seal on a simple jewel box.

Elder: "But its real significance you will come to learn yourself."

I go to the chests. The Elder obliges us to take whatever's in there.

We get an S. Bulb, and 50 gems. I'm guessing the gems are the currency for this game.

The S. Bulb is basically like an herb of sorts.

Outside, Ark notices something... 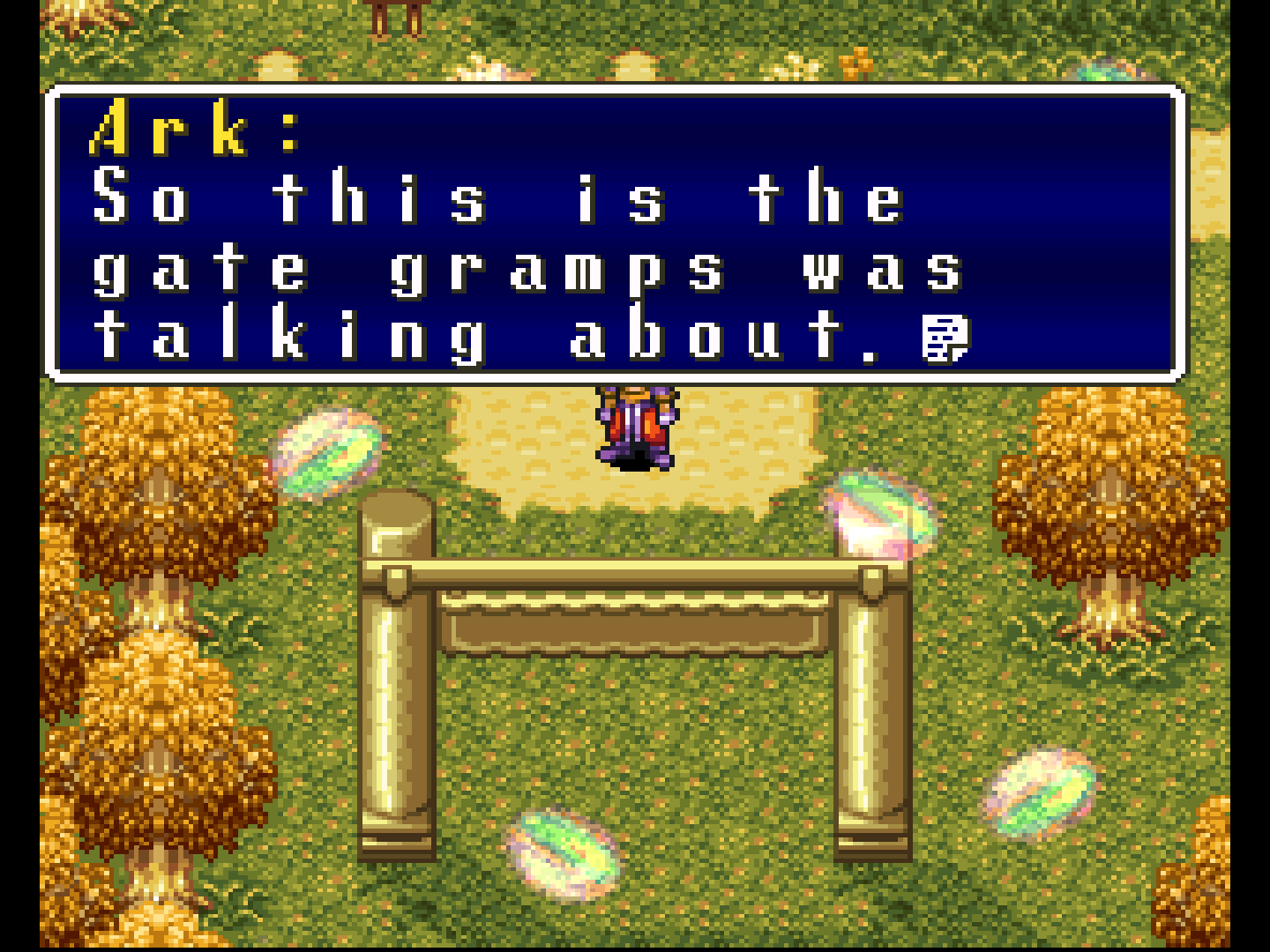 Ark: "...Outside, huh? Sounds exciting! I'll go anywhere!" I wish the Elder hadn't shut out everyone from the outside world, even if he meant well.

Now we're at the world map, where Ark is wearing a red mantle. 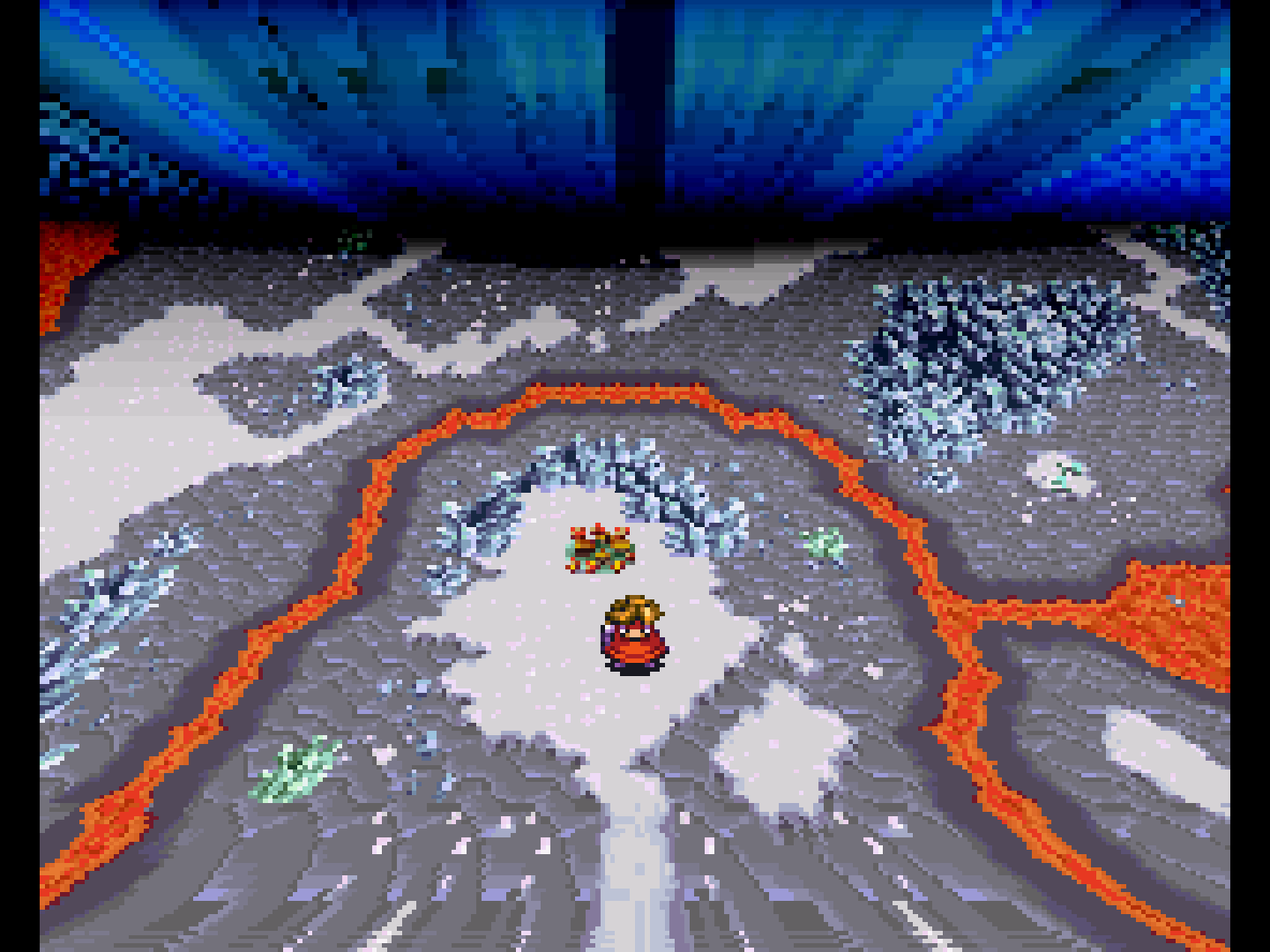 So the whole village is surrounded by a lava river, huh? With crystal, or icy, mountains as well. What is this world?

Every liquid in the world is filled with lava instead of ocean.

Southwest, we see a tall spire. This must be one of the towers that the Elder mentioned to us. 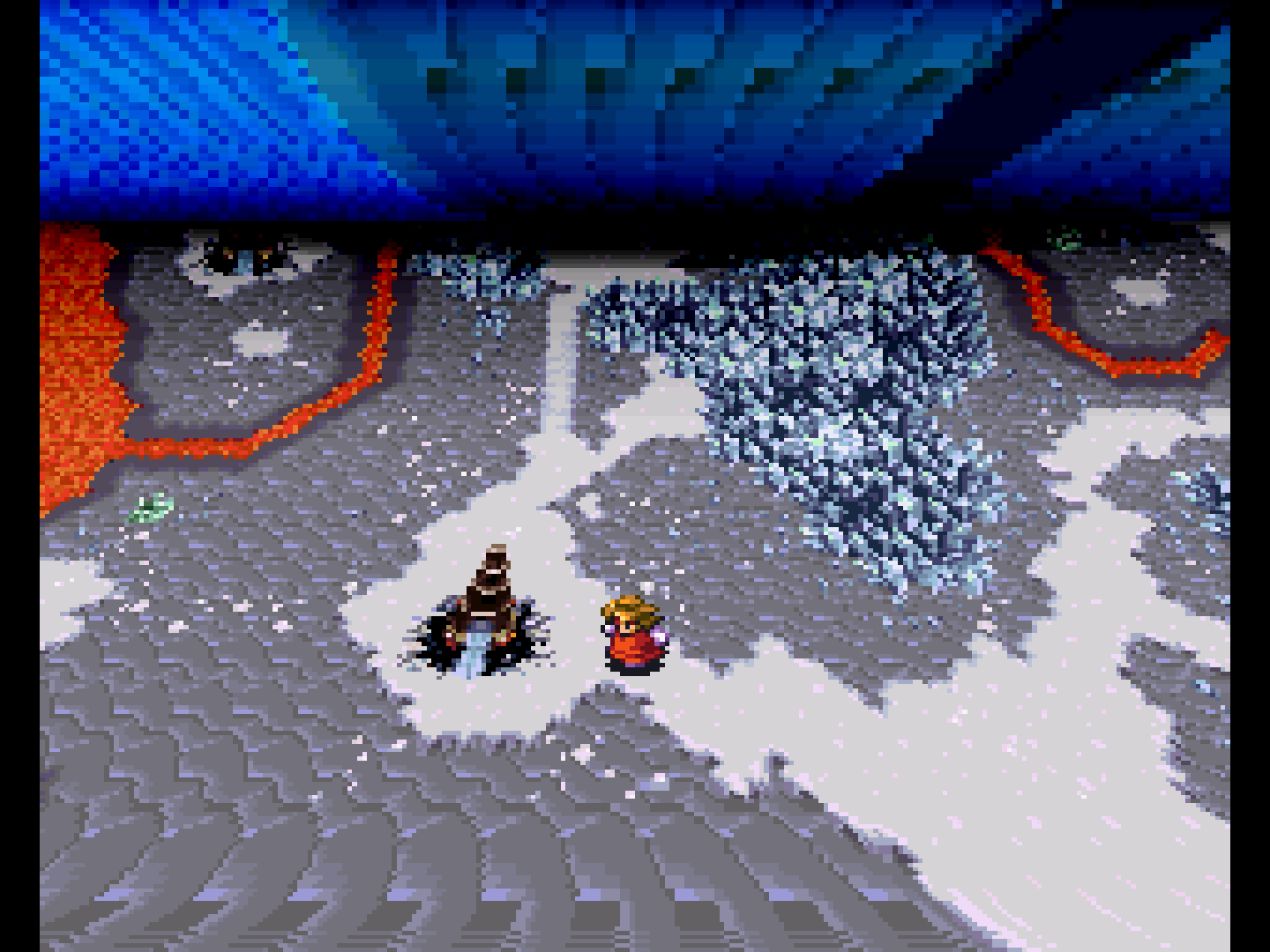 Going north from there, we see another tower. 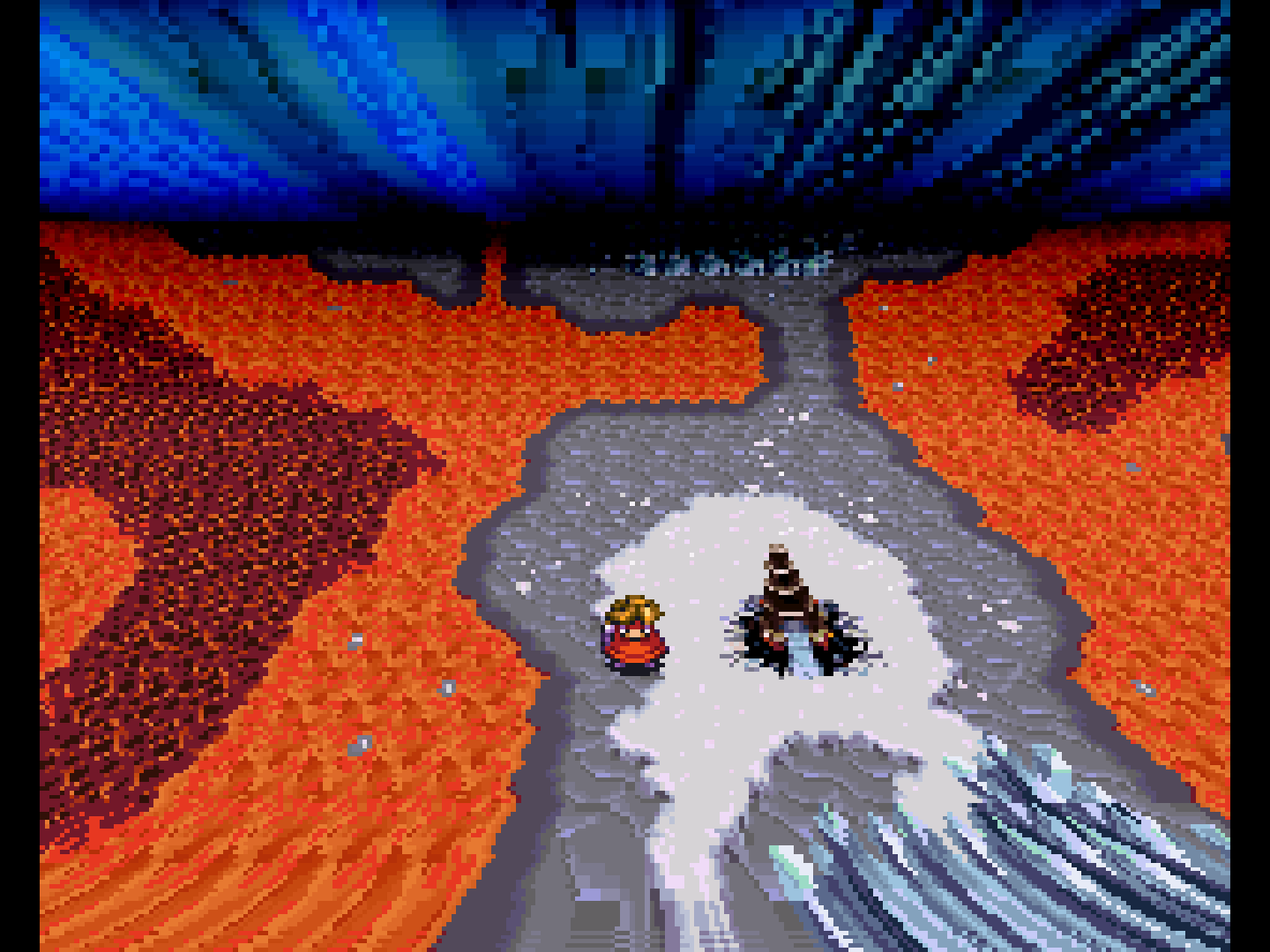 And to the northeast, a third tower...

The Elder mentioned that there were five towers in all. But which one to go to first?

Entering this location leads me inside a facility of sorts. 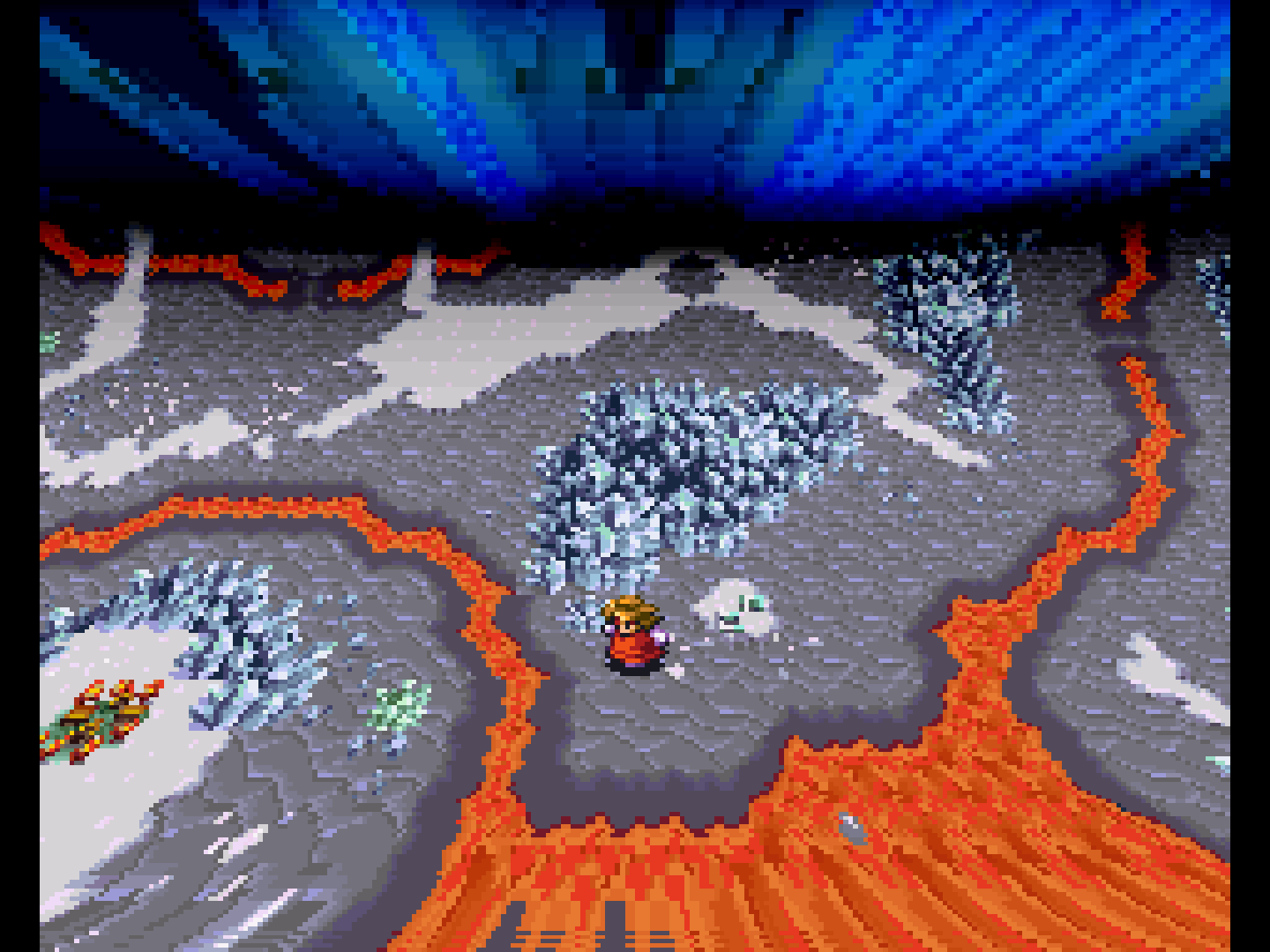 But there are orb-like security enemies with flames surrounding them. 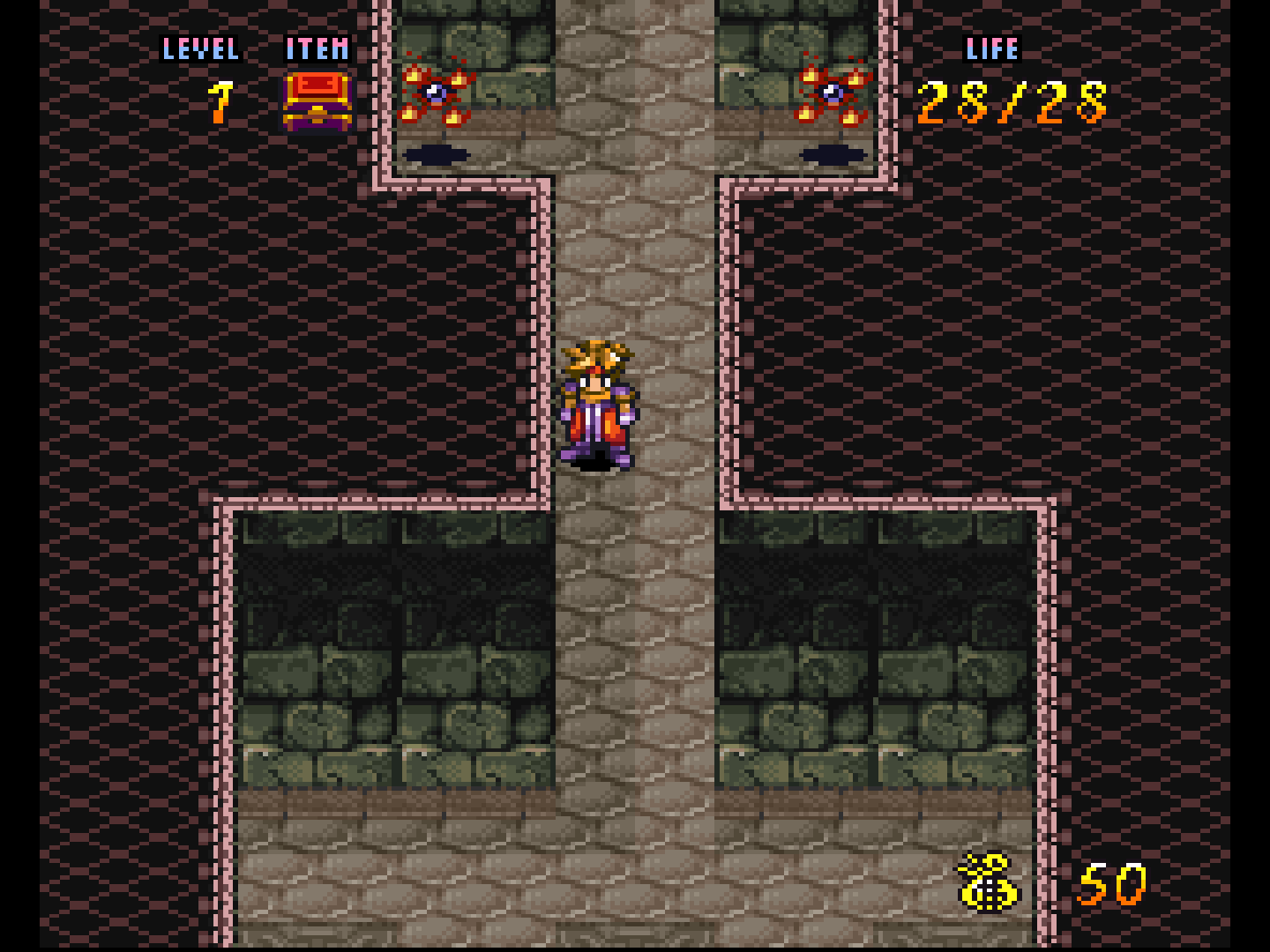 I go to the menu to equip the Crystal Staff, which is what Ark's already equipped with, and proceed to take care of them.

But, a colossus of a knight comes forward. 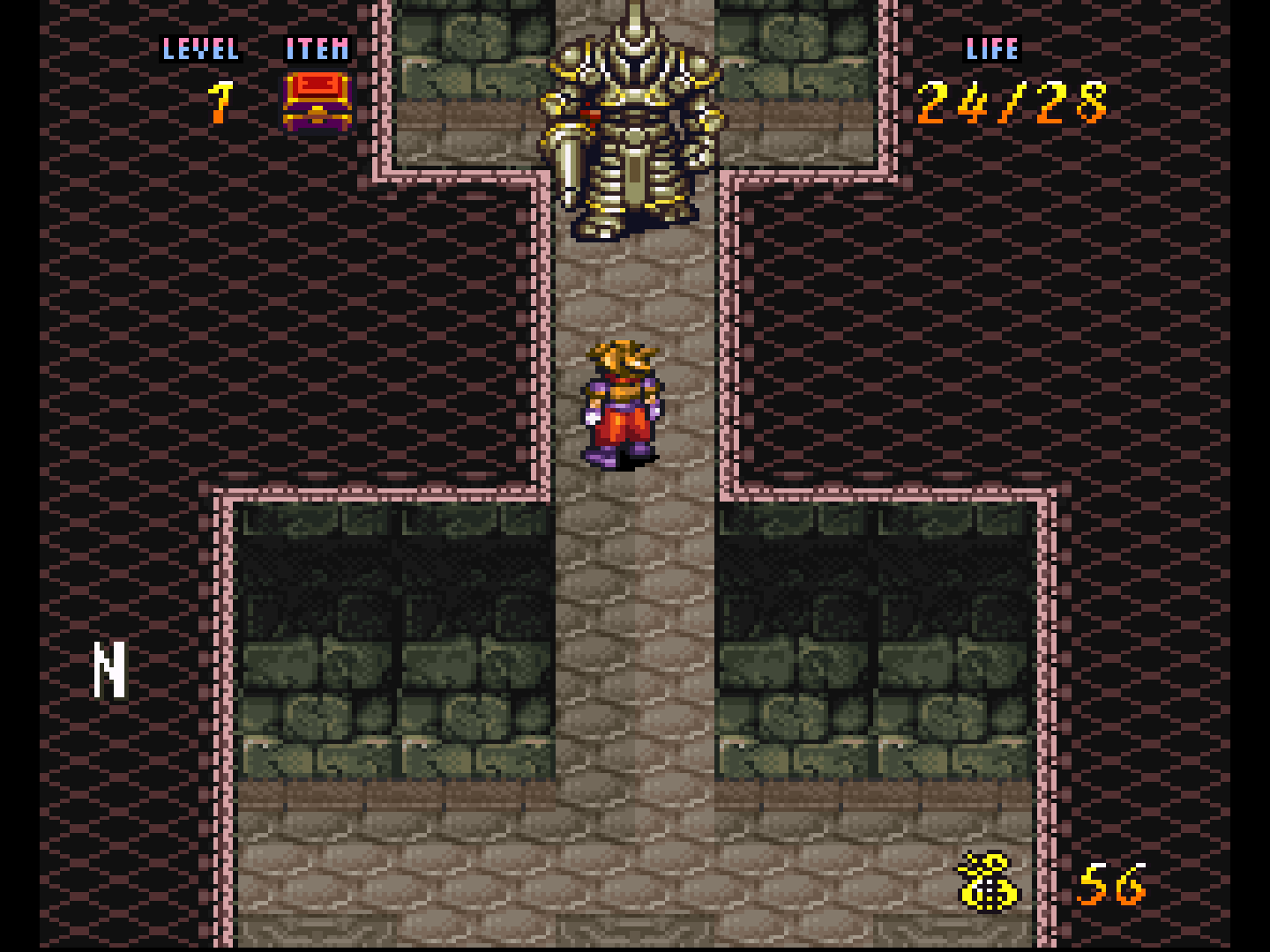 While on the world map, I cannot select the menu box.

Back at the village now, the merchant here is not frozen! I buy another S. Bulb, or is it a small bulb of garlic?

The hooded mages are also alright.

I have Ark rest a bit and save before venturing into the first tower we saw.