The cacti that discouraged us from proceeding before mentions the toughness of lions.

I have Ark climb down the vine, now that the danger has lessened somewhat thanks to our deeds. 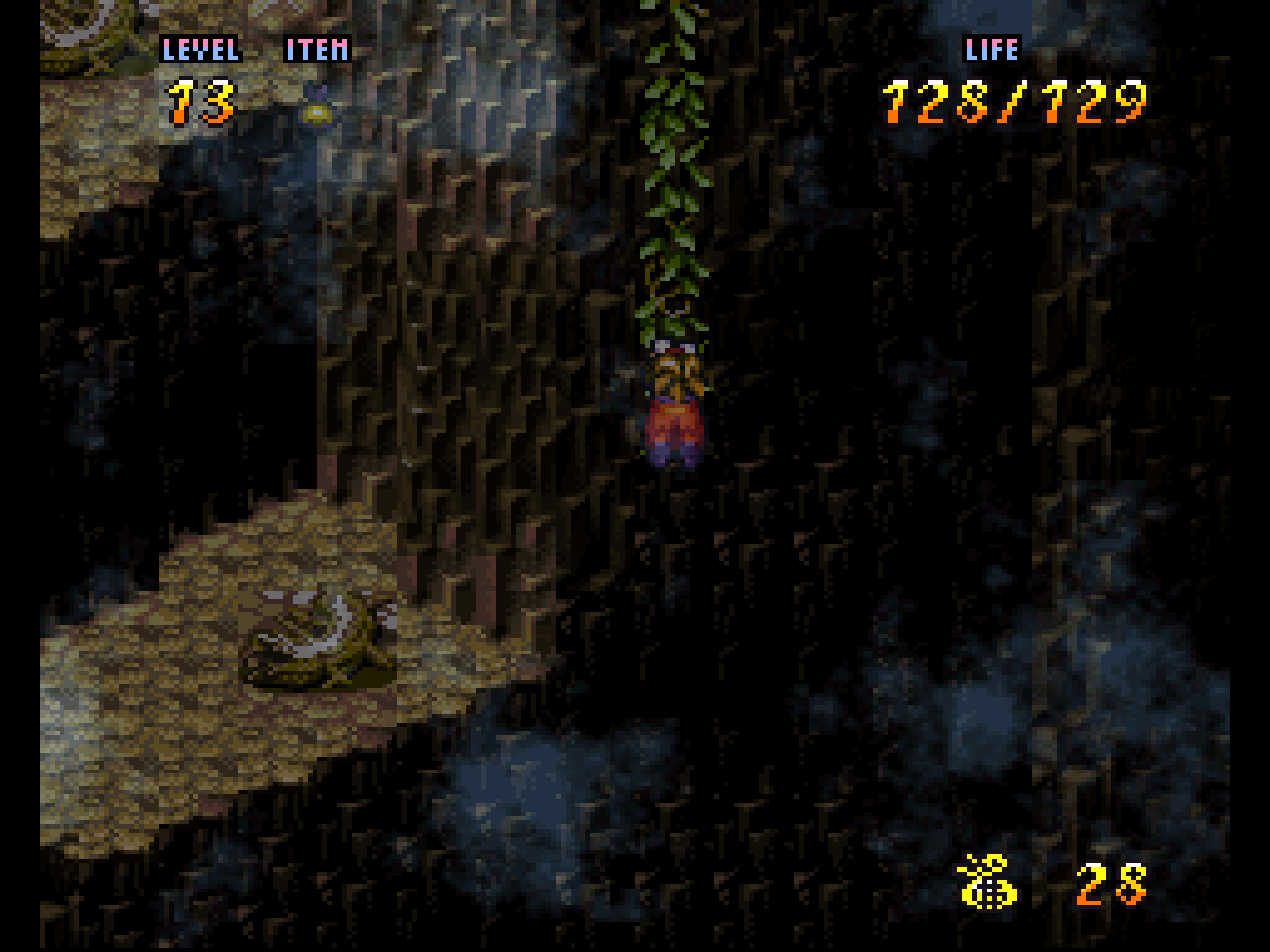 It seems that it's a one-way trip down the canyon, huh? 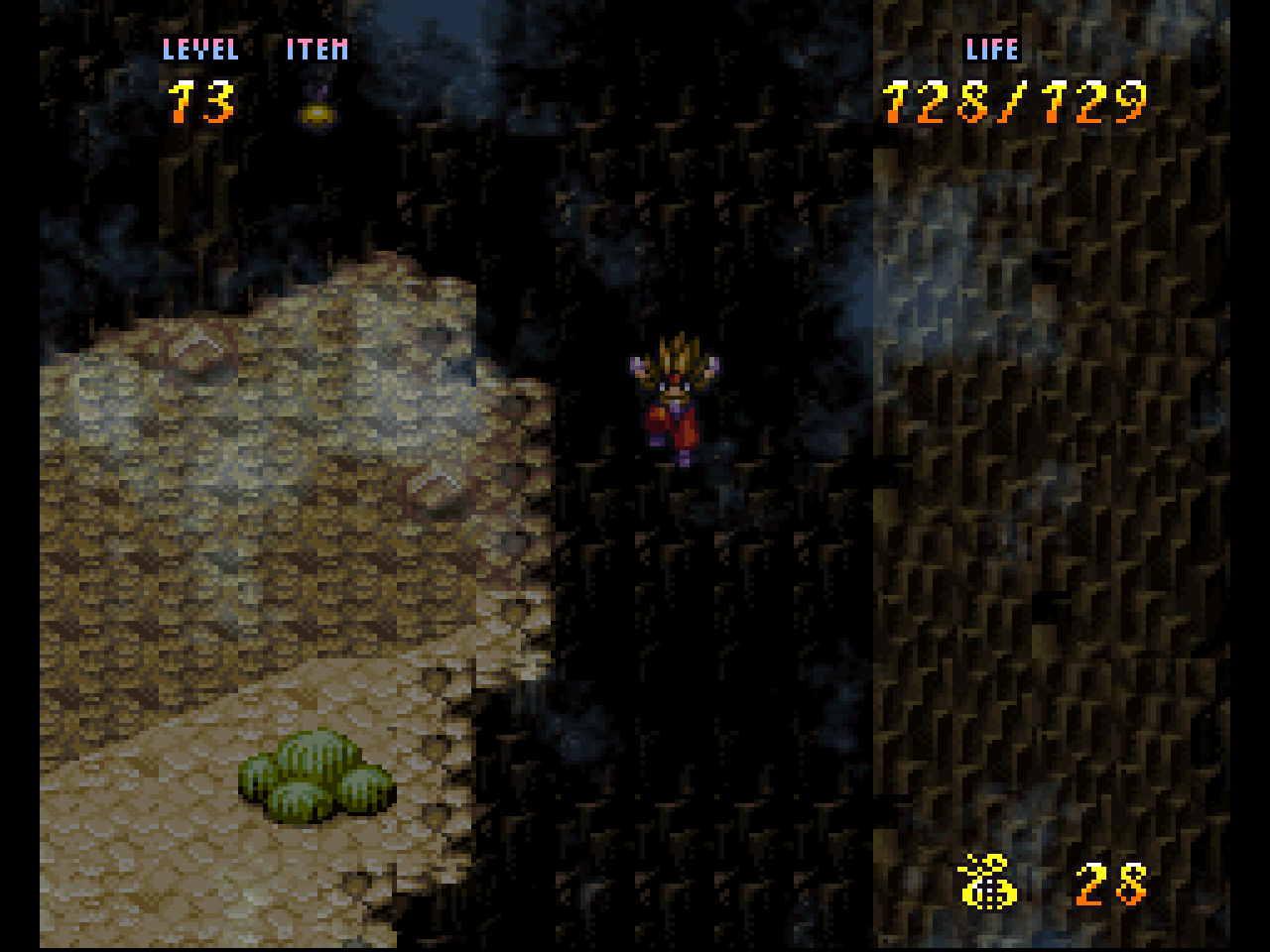 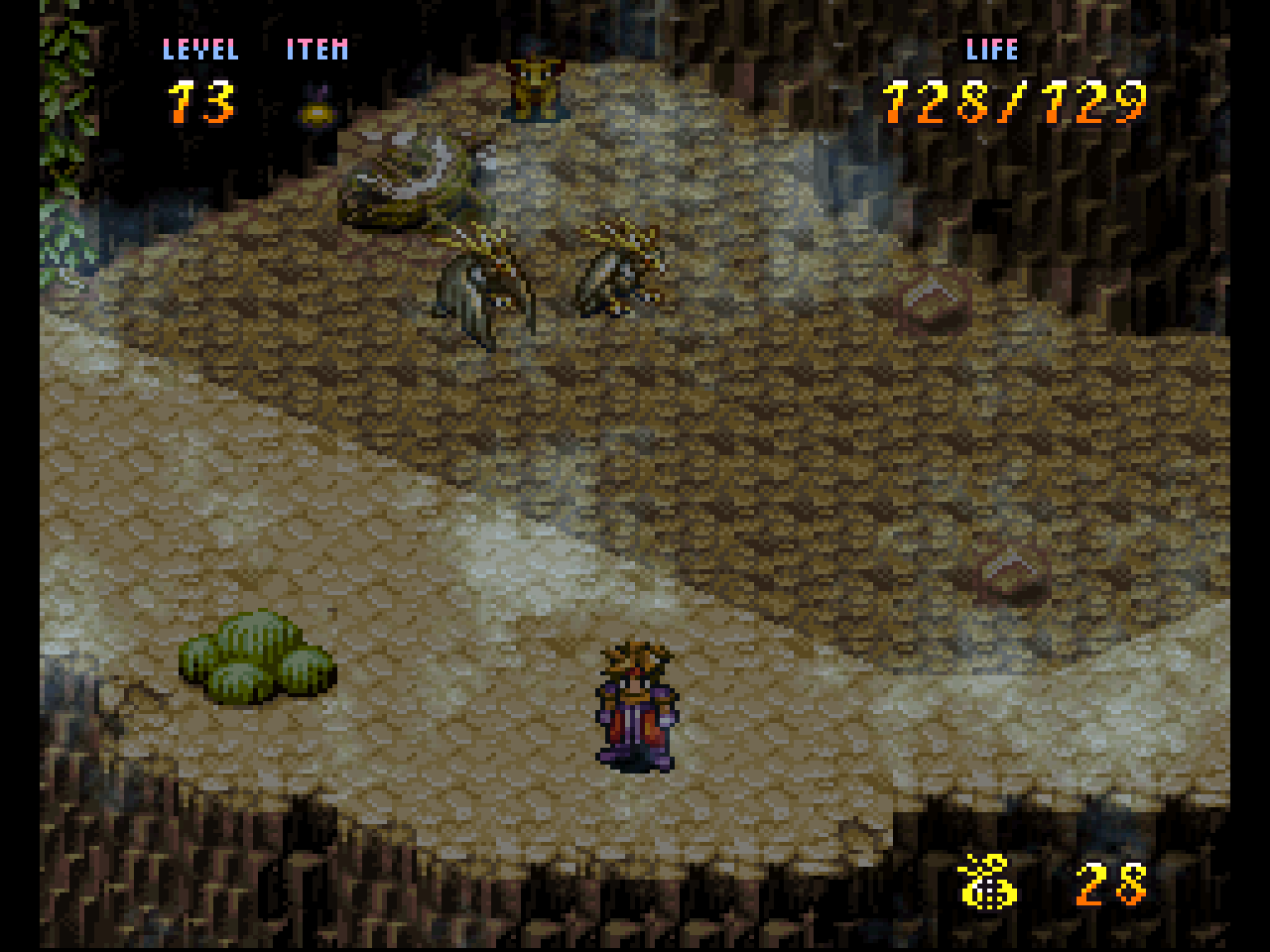 After taking care of the vultures, we approach Leim, who thanks us. Ark's worried about Leim. 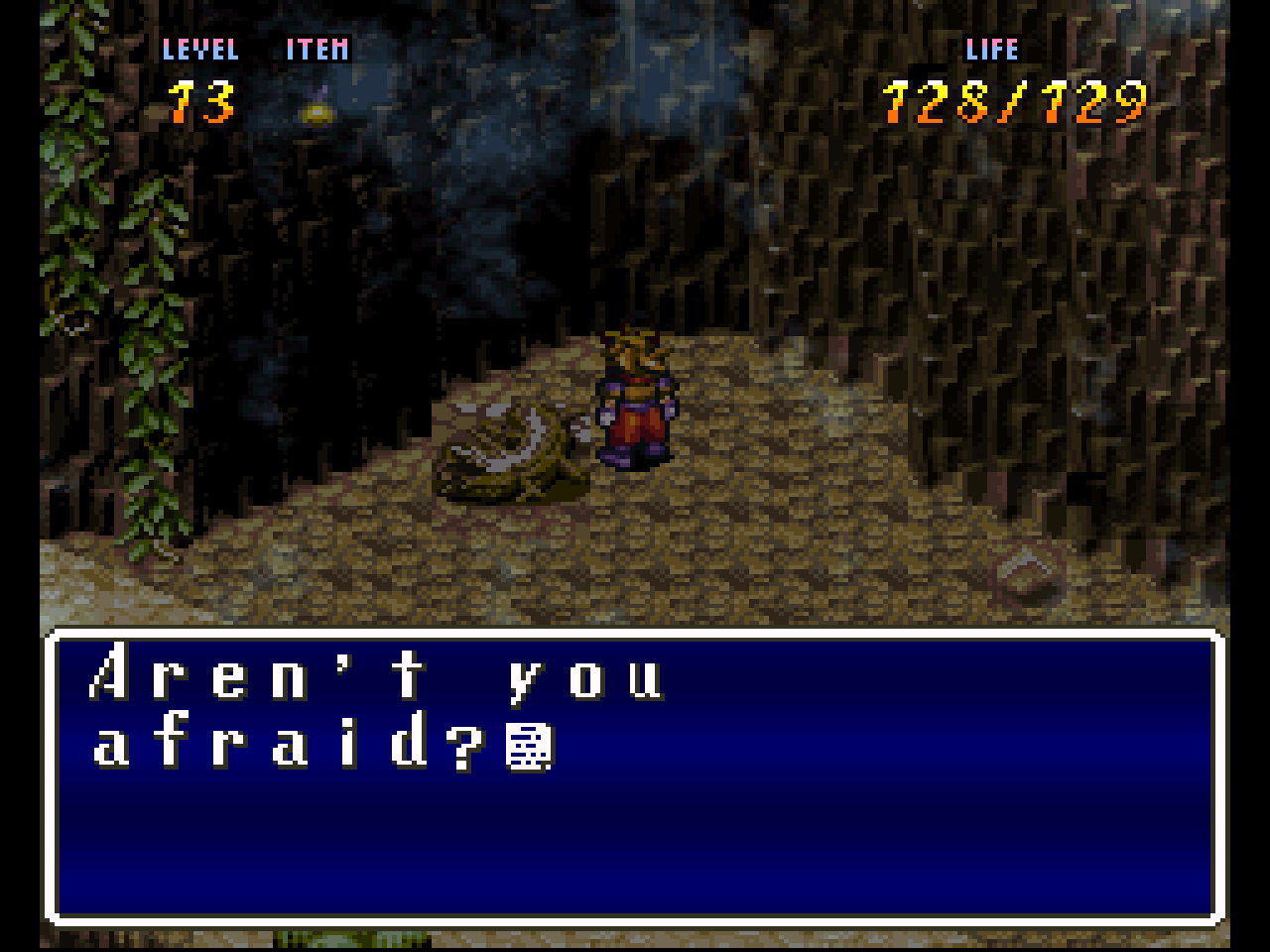 Leim: "All lions have to pass this test." Yikes! Poor Leim, though...

Ark decides to follow Leim to leave the canyon. The music begins to change, and here we go! 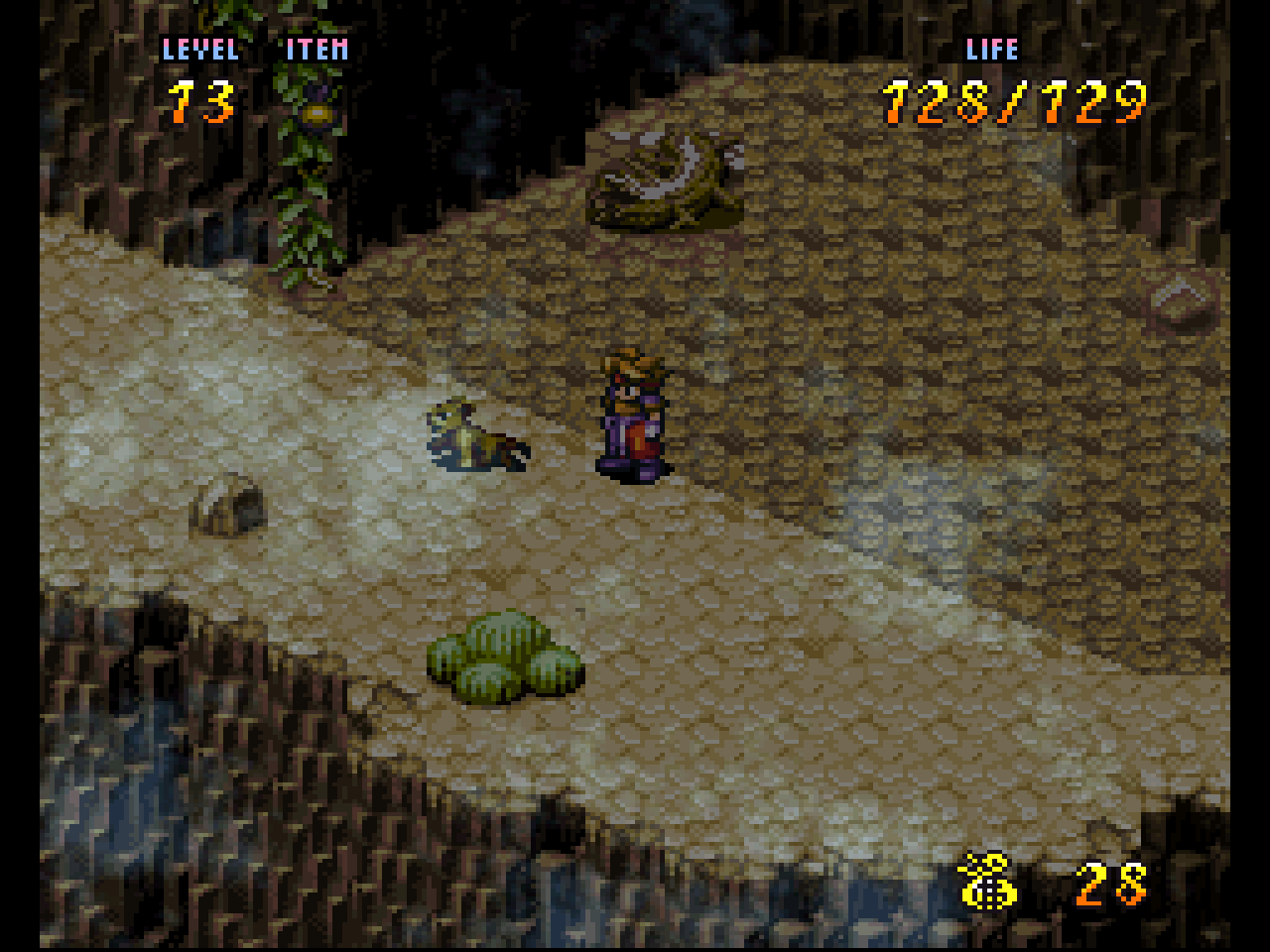 We follow Leim as we guard him against nearby swooping Peritons!

And we make it to our first hurdle... 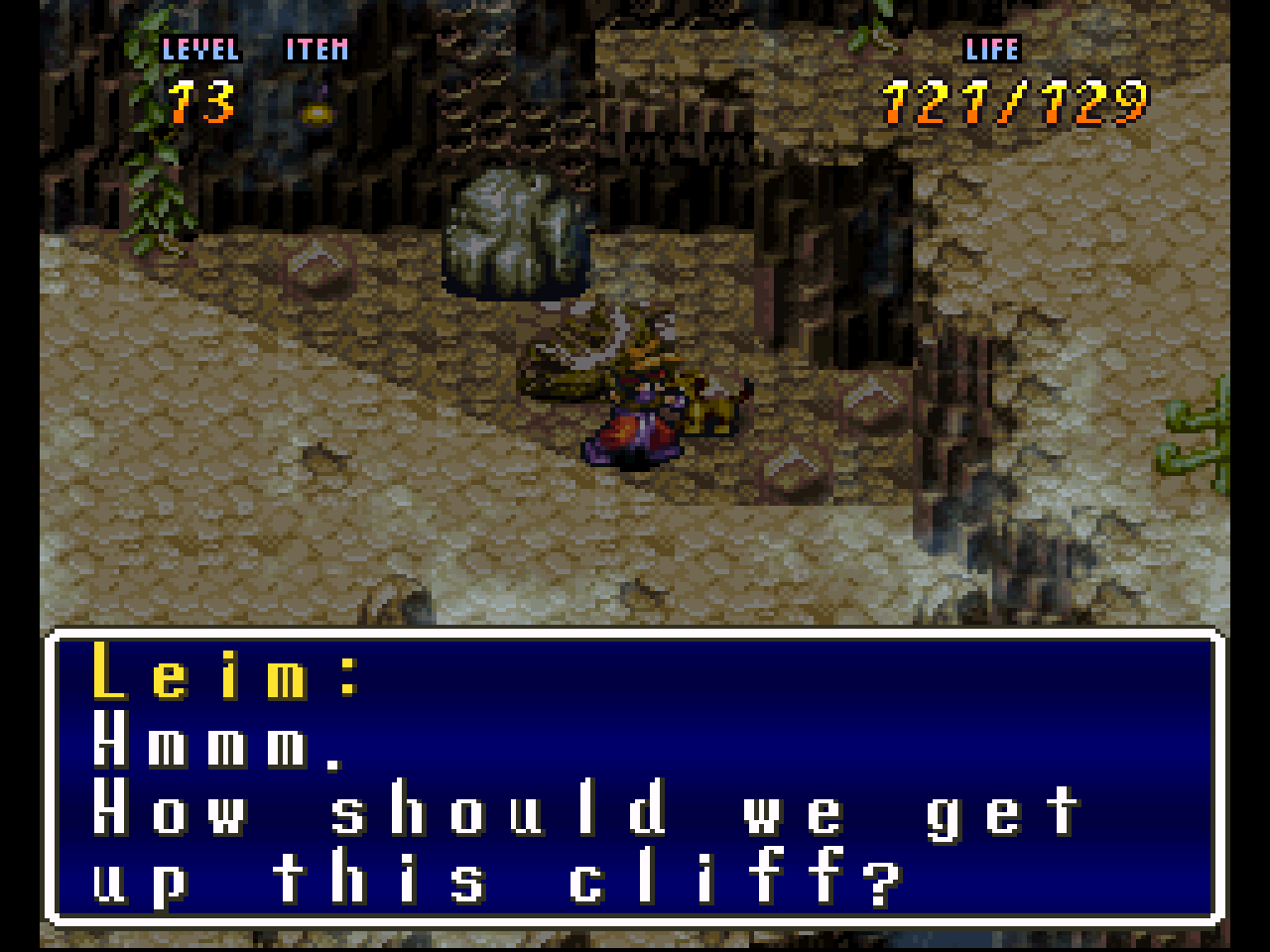 I try breaking a nearby boulder covering the cliff face, but for some reason, it will not budge.

I have Ark turn back to find other routes out of the canyon, no good. It takes me a minute to realize there's an empty space near the boulder, and I decide to push it.

We slowly piton our way up. Leim decides to speed up the way out a bit.

Familiar enemies like the mud monster and orbs of flames await us!

Leim is at an opening on the far end of the next area in the canyon.

I accidentally go way ahead of Leim, and turn back to find him in the same place. 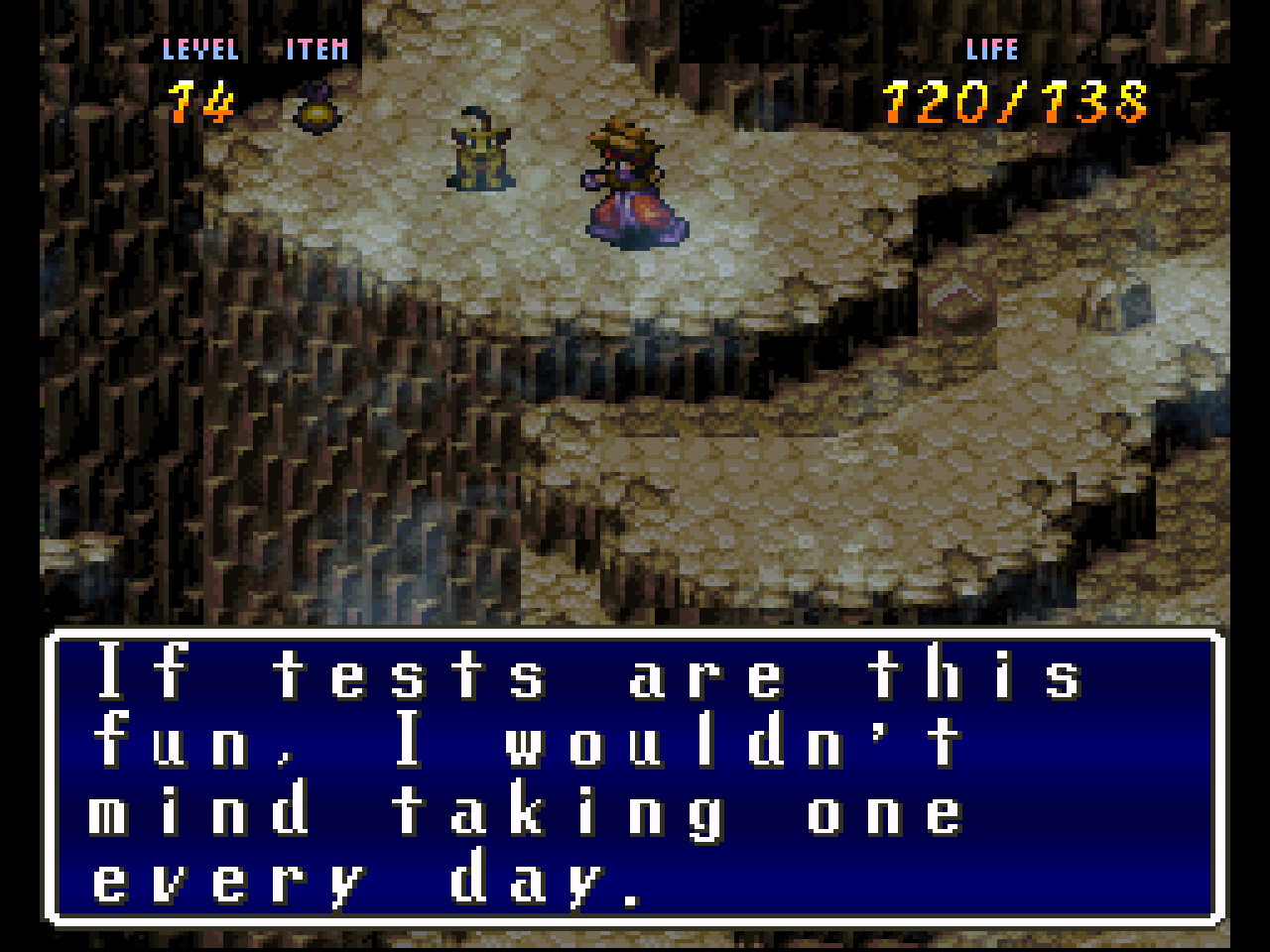 At least he's enjoying the trip...

I notice a small stream of water flowing on the cliff face opposite a cactus...

Leim ignores it and moves south.

Now we're at a fork, I tell Leim that we'll check where the right way is.

We go east of the fork first, which shows us the way up and out. South fork, not so much.

We go back to Leim and say it's east.

Leim: "Wow big guy! You can even foretell the future?" I let him play along with that impression.

Now that we're near the exit of this area, he compliments the fun of this "test."

Next area, he's amazed at the monsters nearby, and follows us to watch us fight them.

He's in awe at our easy combat with the Peritons.

East of here is a stone bridge, which Leim is excited about, but is it enough to carry all of us forward?

Unfortunately, our weight doesn't support the bridge and Leim falls!

Seeing no way down, we move east...

Next, we climb the nearby cliff face, and at the top we go west... 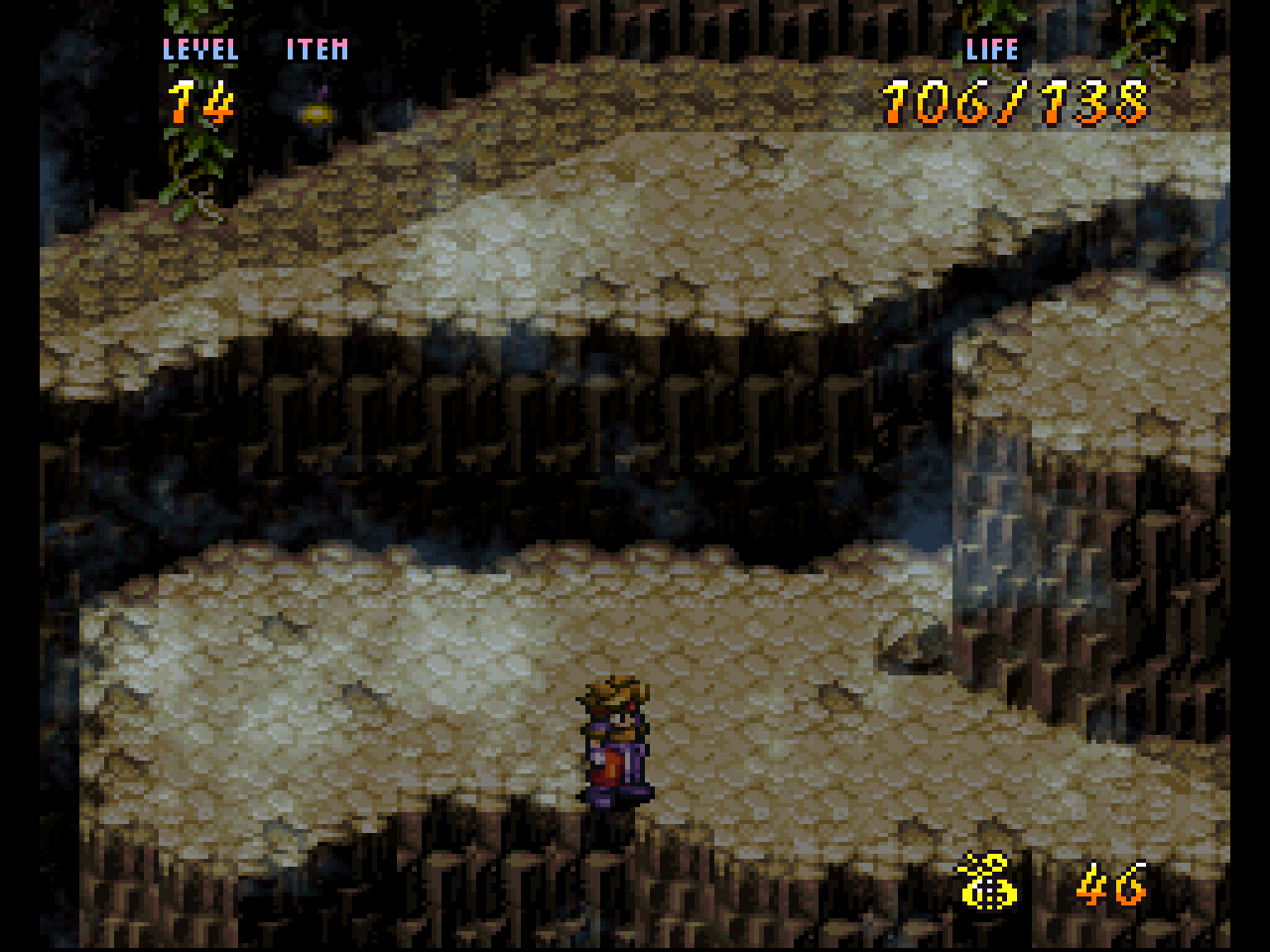 It seems that we're stuck...

Until we go back and jump down from an opening near the other side of the stone bridge!

We make it back to the maze of rocks, and look for Leim back at the shadowy opening of the canyon. He's not there. We manage to find him back at the open area with the Periton vultures.

We gingerly cross the stone bridge, with us slightly tailing Leim. 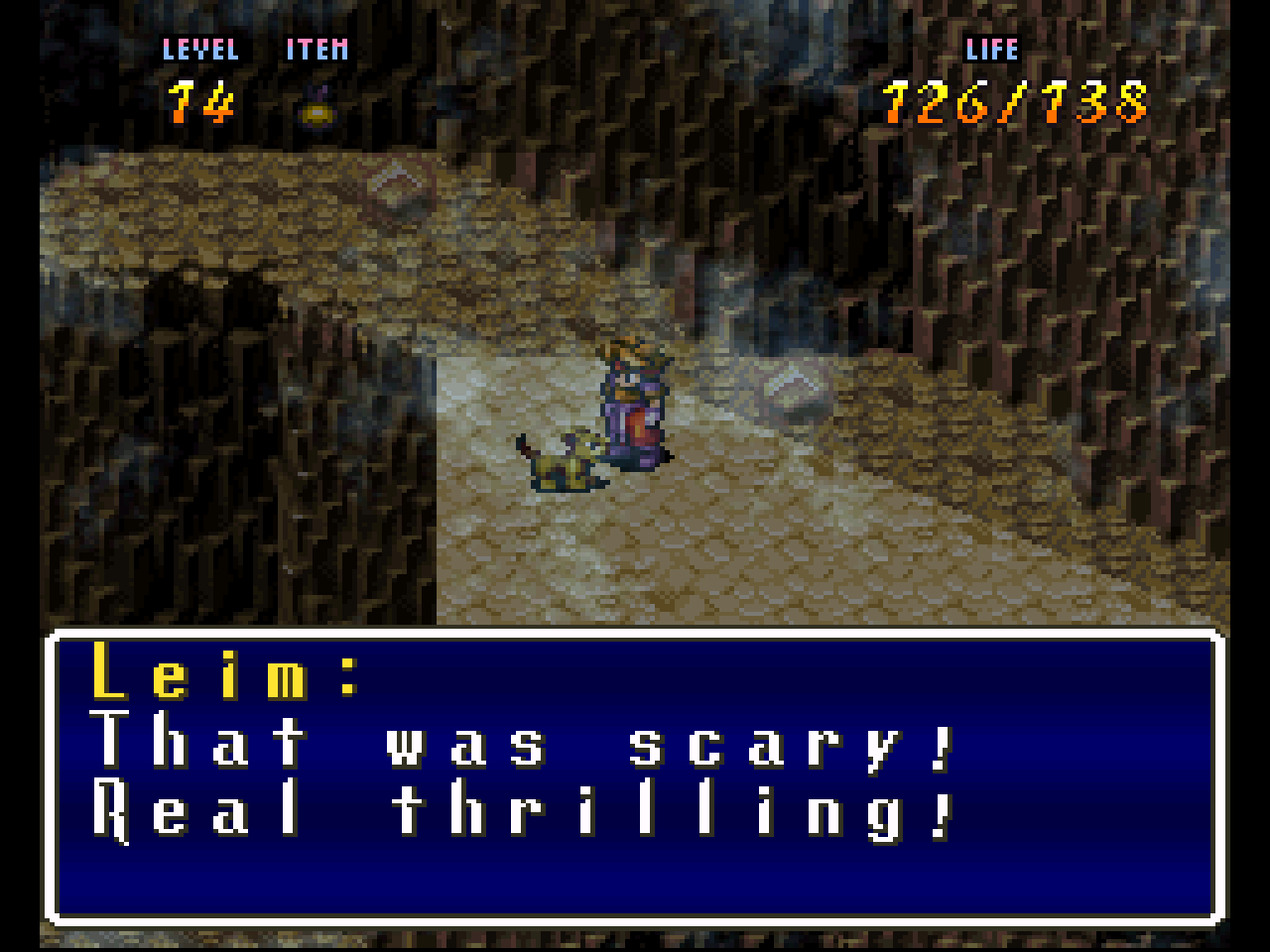 Leim tells us his growing excitement for this "test," meaning we passed this area with flying colors.

Next area, Leim's surprised at the sheer height of the cliff, and so am I.

He decides to make this into a race...

Leim has four paws, so therefore, he wins.

Next area, Leim senses a boss... 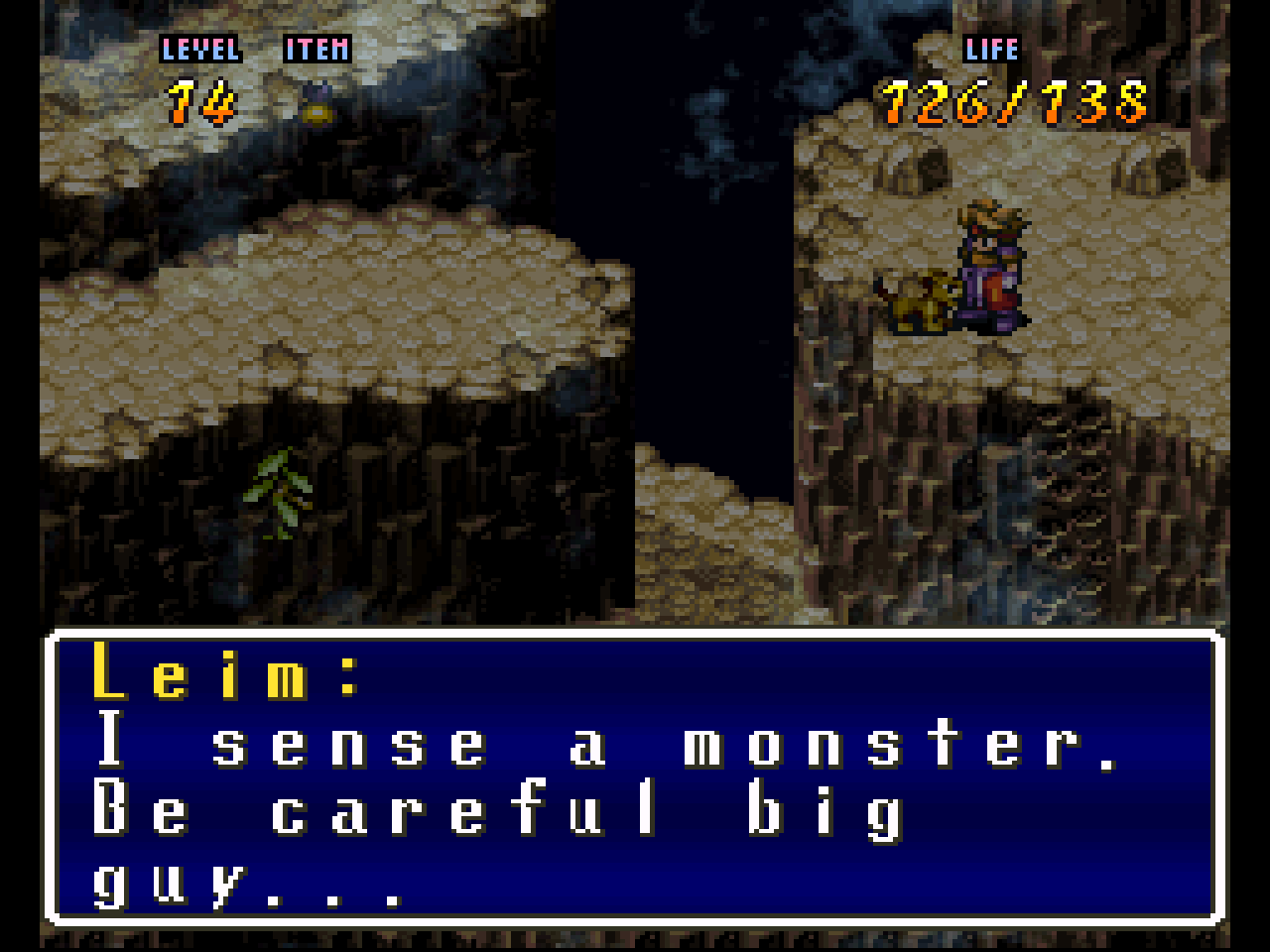 This should be my "boss is coming up" warning image.

Leim leaps to the other side of the gap, and casually walks away. 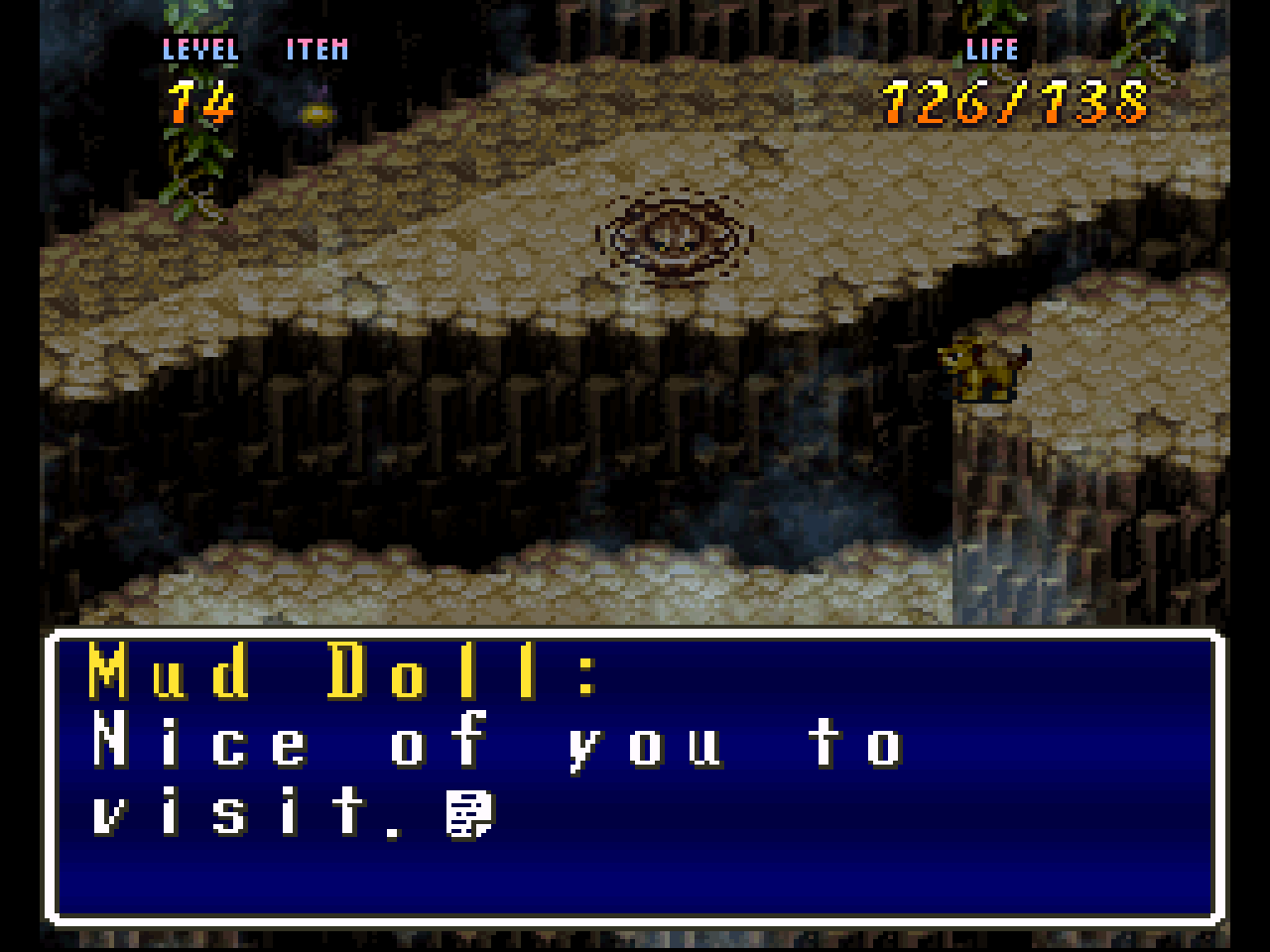 The "party" that this monster wants to partake in is definitely not a friendly one for us...

They start by shooting out mud pellets!

Maybe we should throw them back at the mud doll?

It doesn't work...how do we reach them?

We can't escape! Plus, magic rings don't work here either! I'm guessing it's because we have a guest party member around...

I see a stray rock and have Ark give the mud doll a return present!

Leim leaves as soon as we pick up the rock... 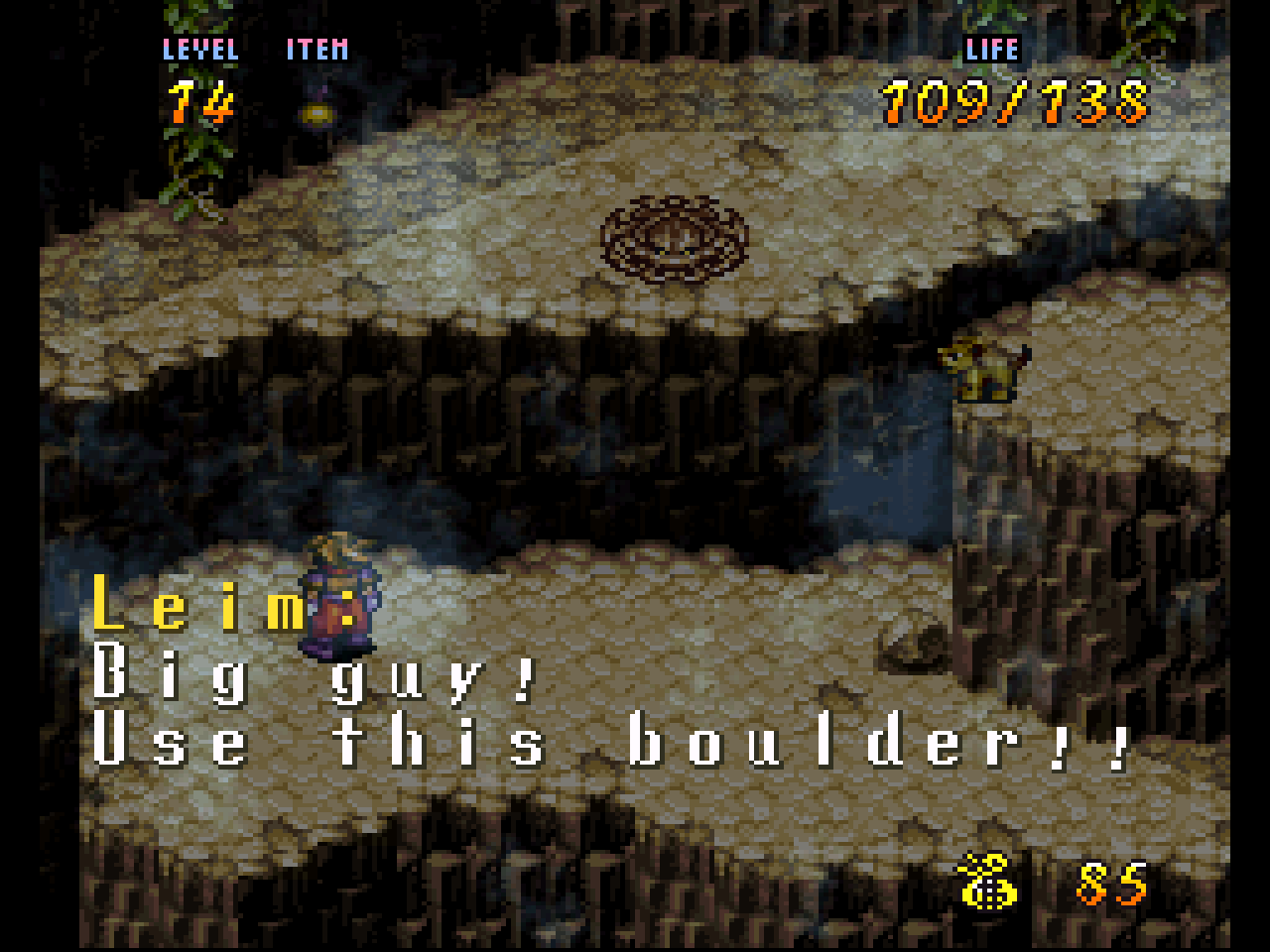 Now we know how to beat this mud doll!

We continue the strategy... 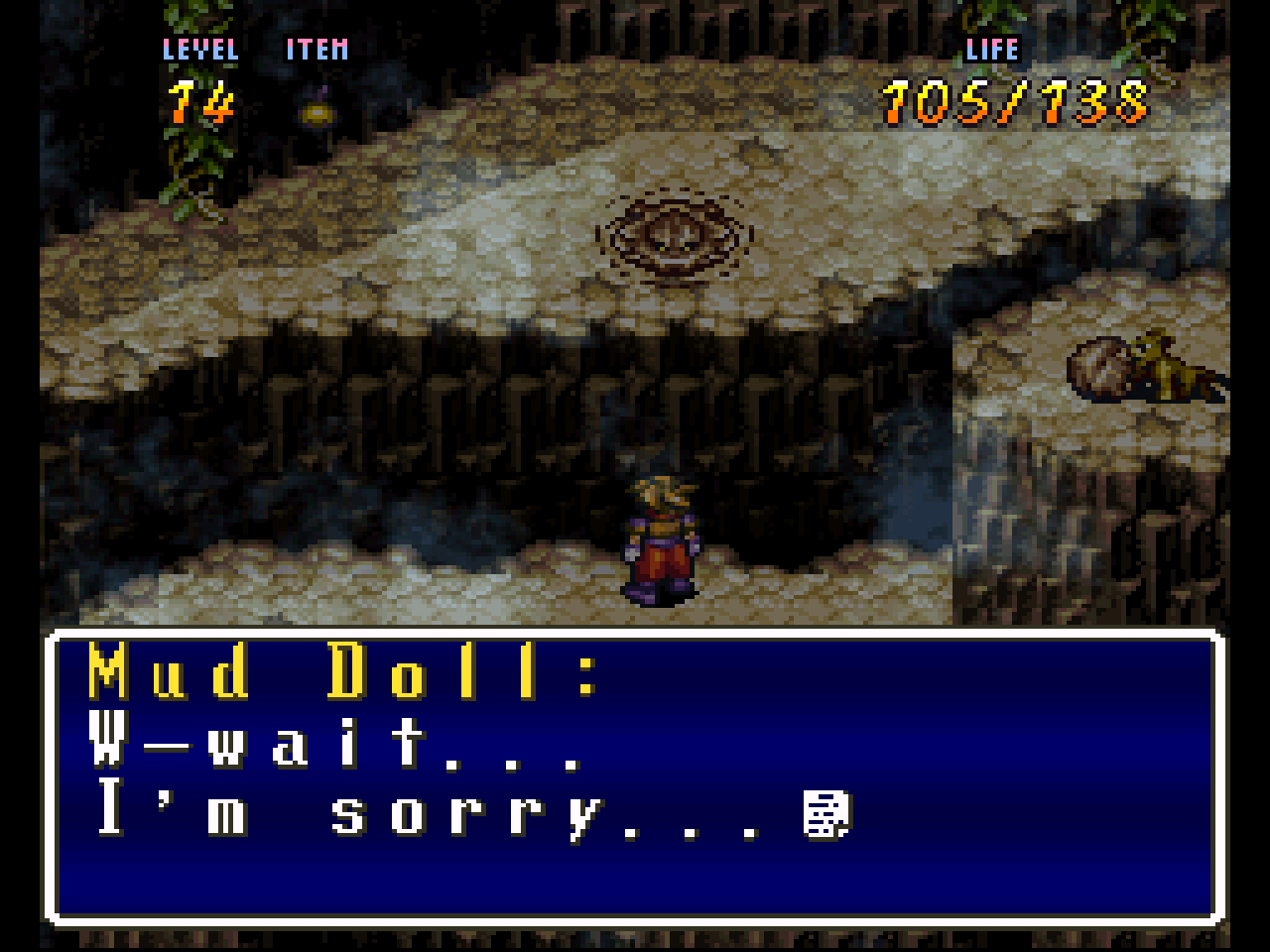 Oh dear, I don't like where this is going...

Mud Doll: "You courageous souls facing the test... It was low of me to try taking advantage of your inexperience. I swear to behave from now on. I've got a gift to prove it here."

The mud doll opens a land bridge to meet them. We fall for their trap, as I expected.

Down into the chasm we go! 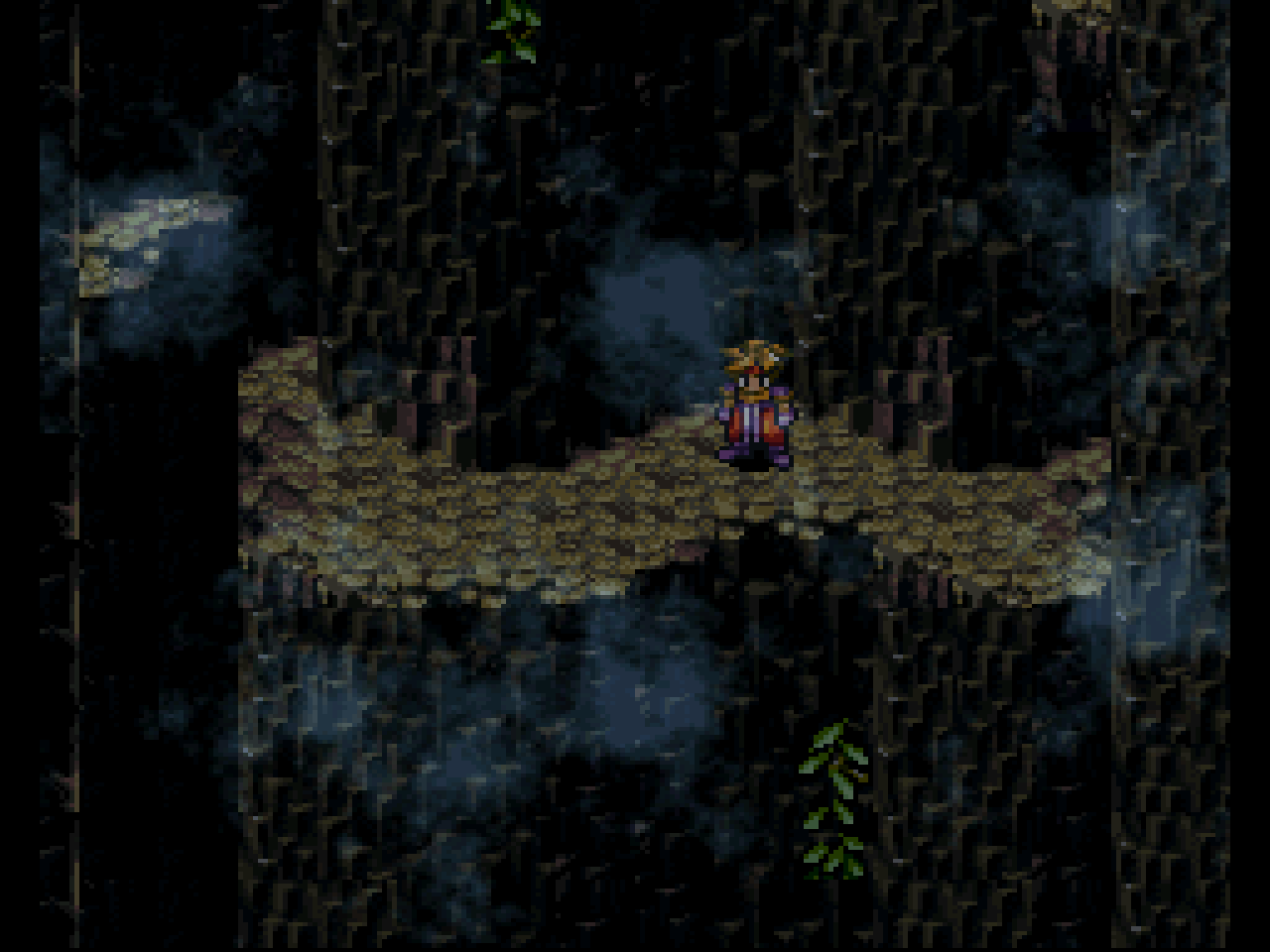 Now how do we get out?

The mud doll lectures Leim on "the pain of betrayals" and spares the prince, saying "that's what life's about". Lucky they don't know we're still alive! 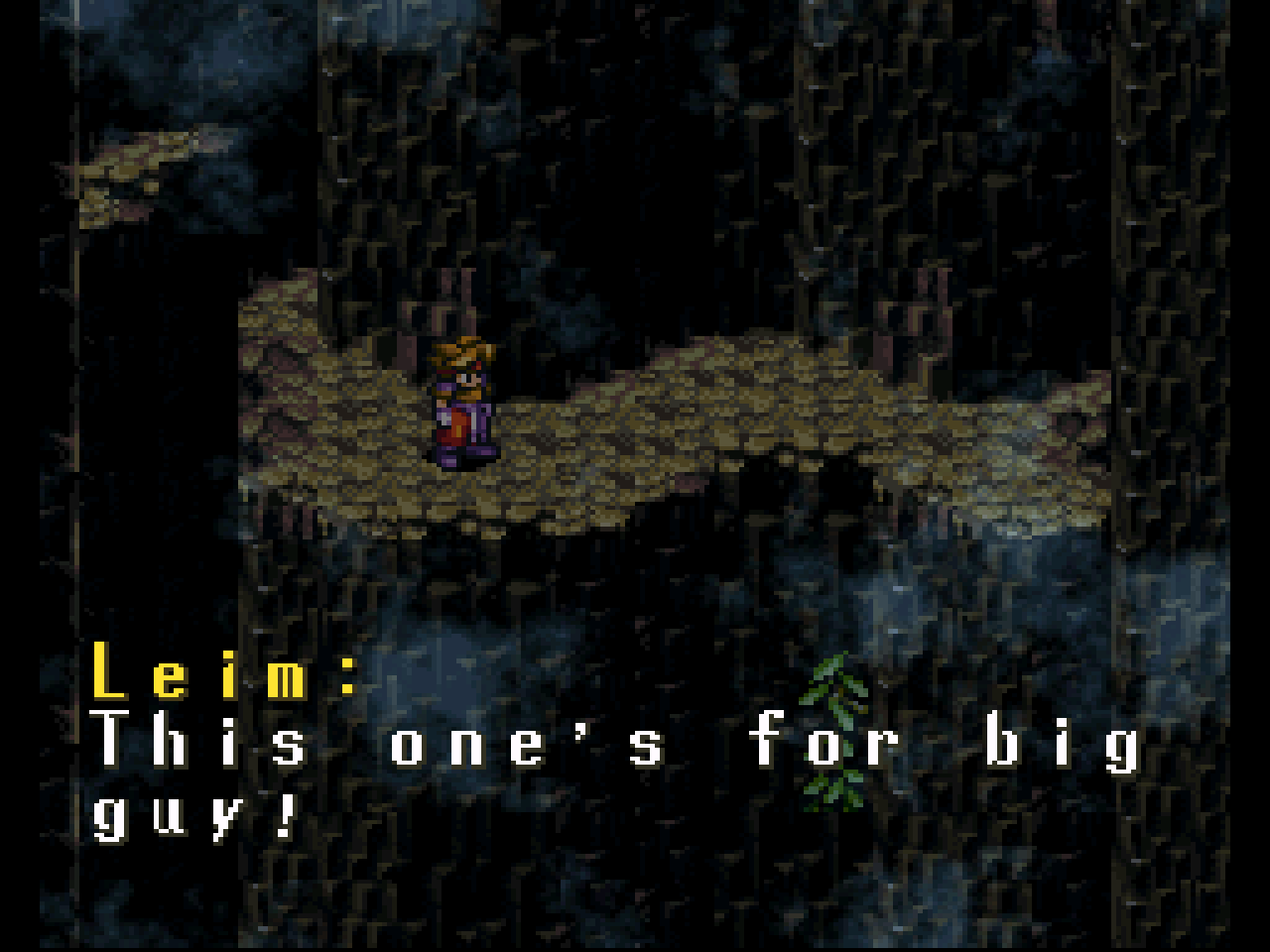 We hear pellets flying, and claws...

The mud doll is impressed at the lion prince's fighting spirit! 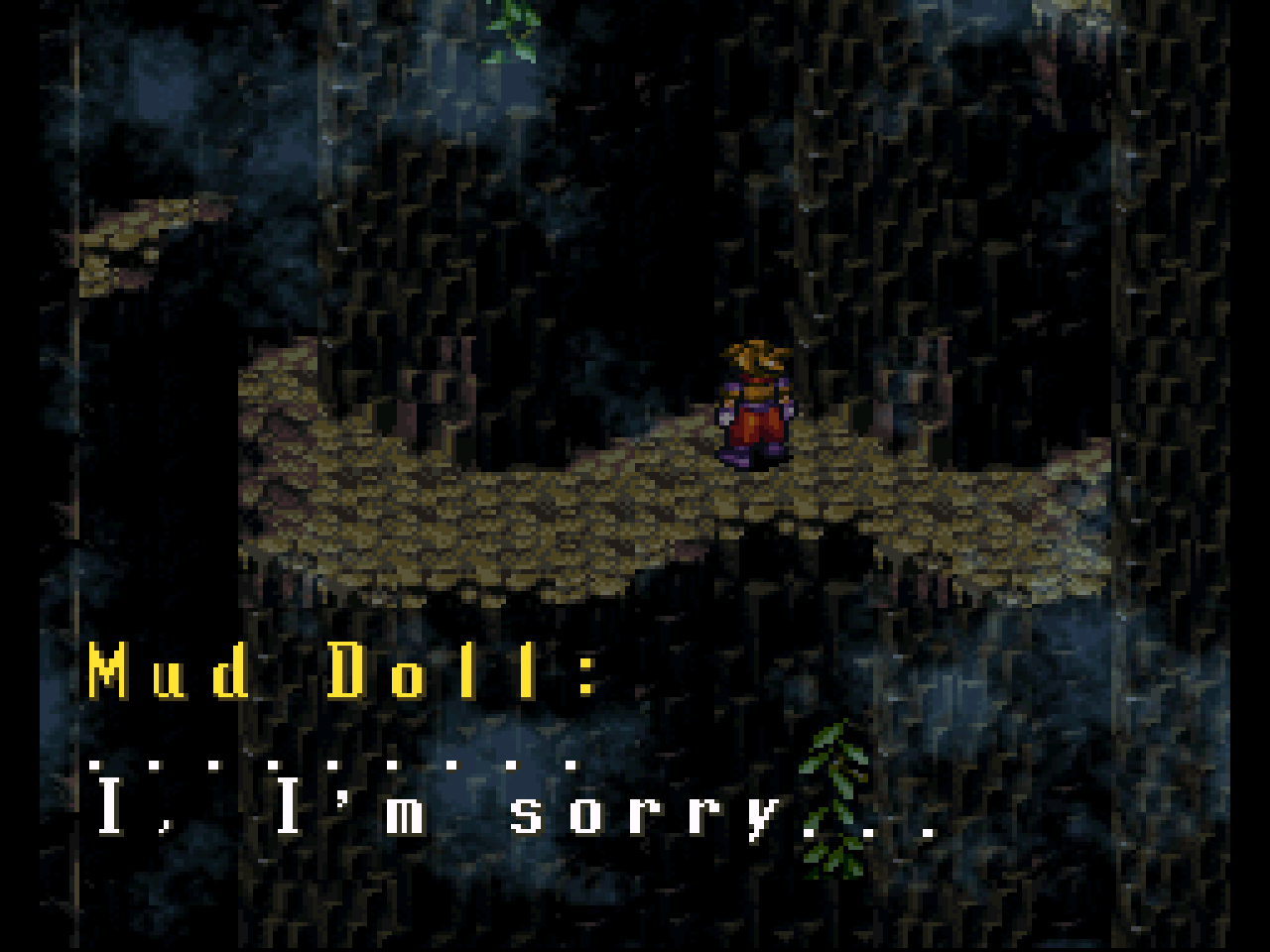 The mud doll finally surrenders! Or do they?

I have Ark jump a couple of times, since I really want to take on this monster!

Leim jumps down the cliff, reuniting with us! 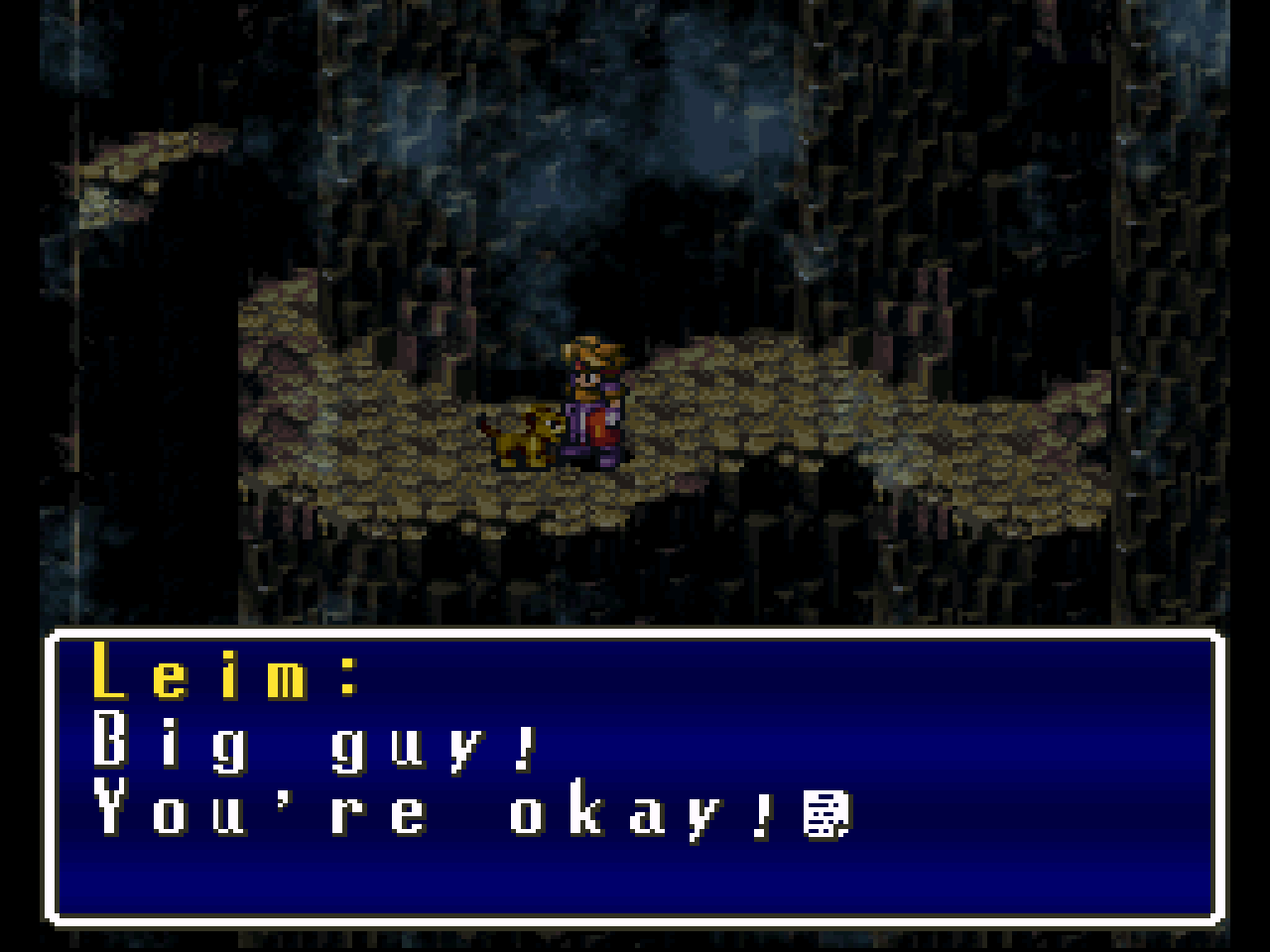 But thanks to my slippery fingers, or the stickiness of the control pad, I accidentally reset the game! I have to take on the escort mission all over again!!!!!

It's a bit quicker acing it the second time around now that I know what to do, though, Leim gets hurt more from the Peritons.

I still cannot outclimb Leim, even after a head start...

Alright, back to where we left off!

Ark: "You think Ark will go down that easily?"
Leim: "Big guy. I did it. I defeated that monster by myself. I, I feel great. I feel like I have the power to do anything." Great job, Leim!

A sparkle falls down into the chasm near us...Leim wonders if it came from the mud doll. He doubts it though, since it's a "beautiful stone." 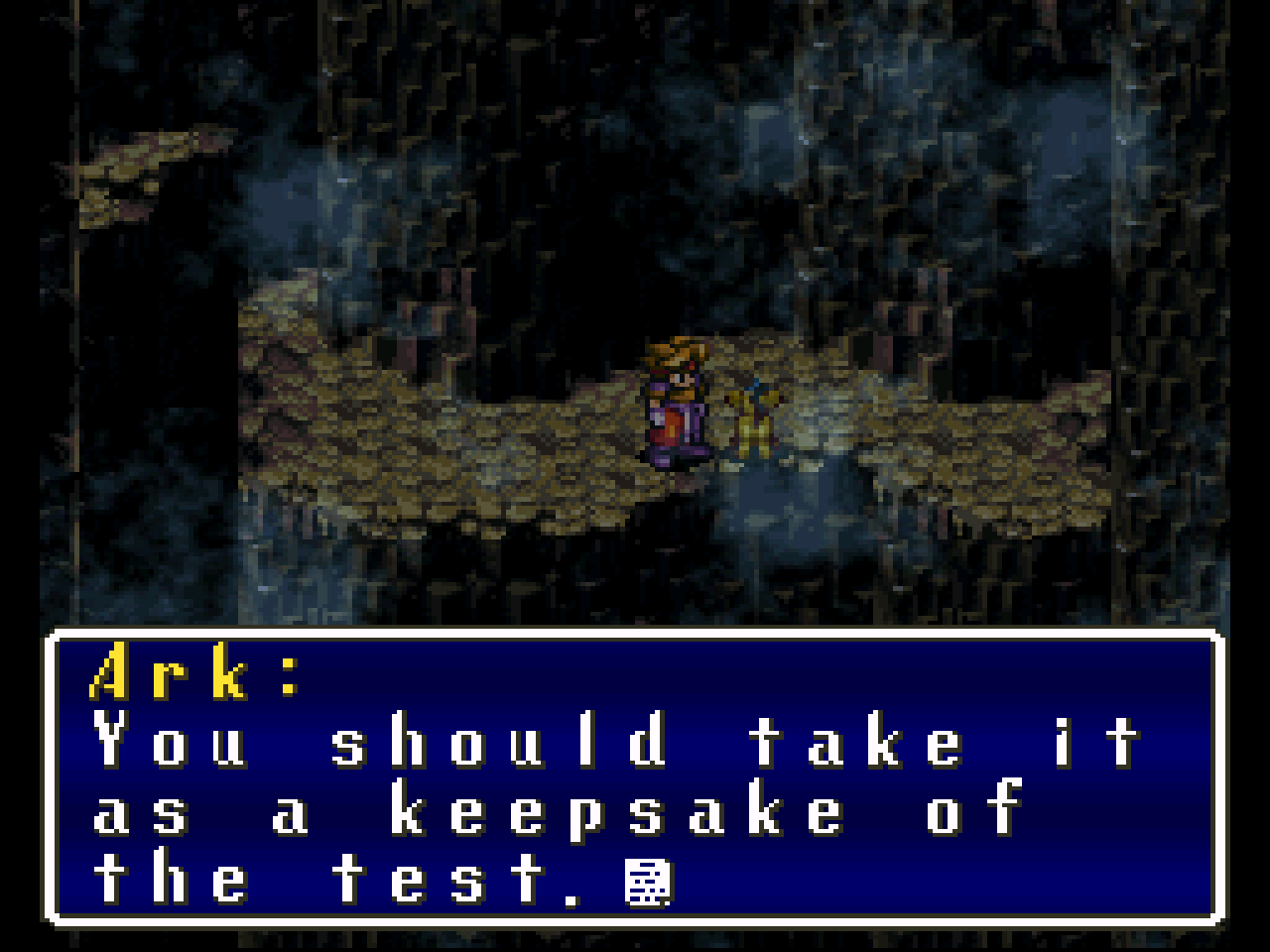 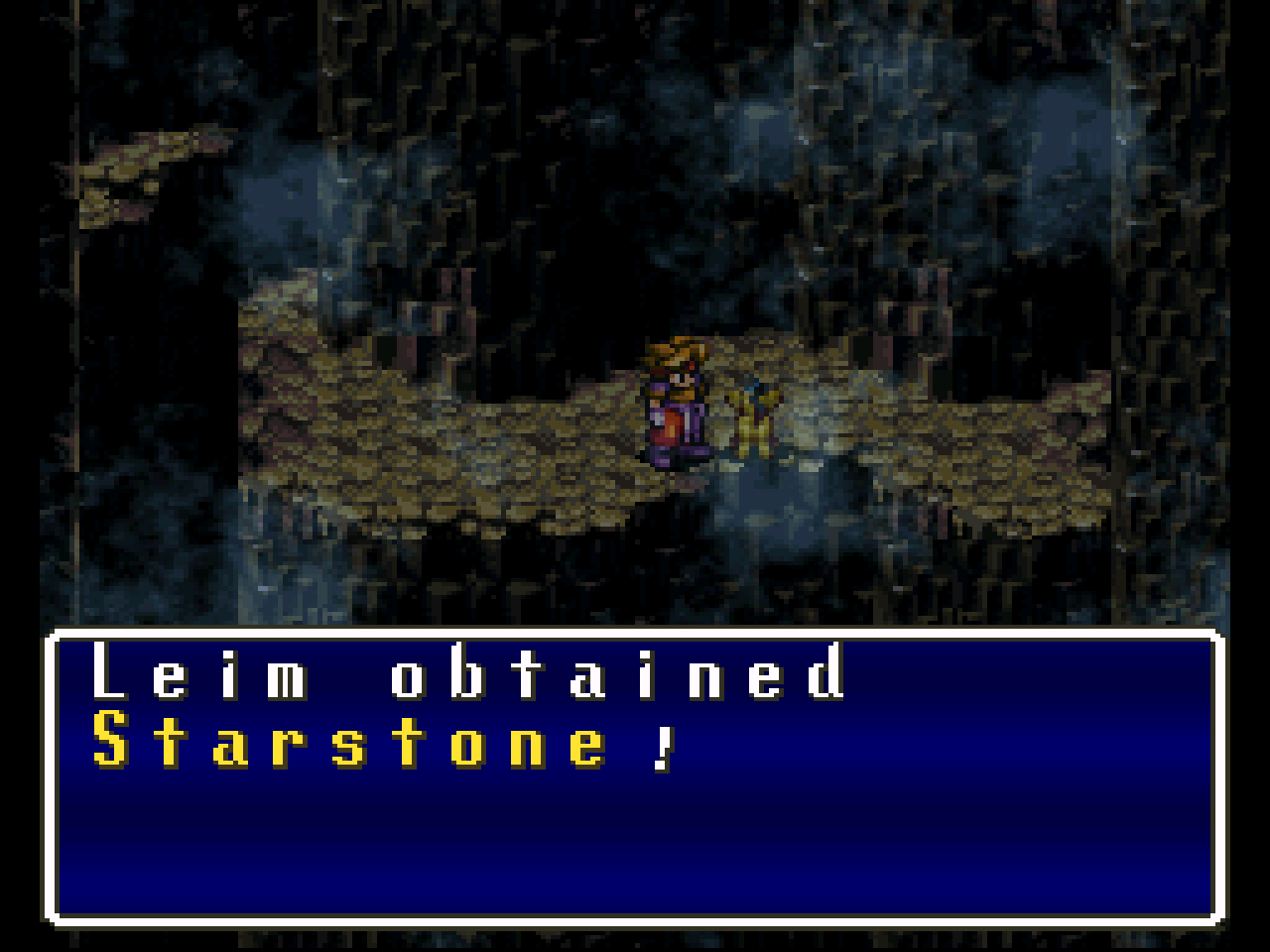 So that's what the stone's called.

Leim decides to call a gull to take us back. He leaps out of the chasm. It takes a second before we're out of that canyon... 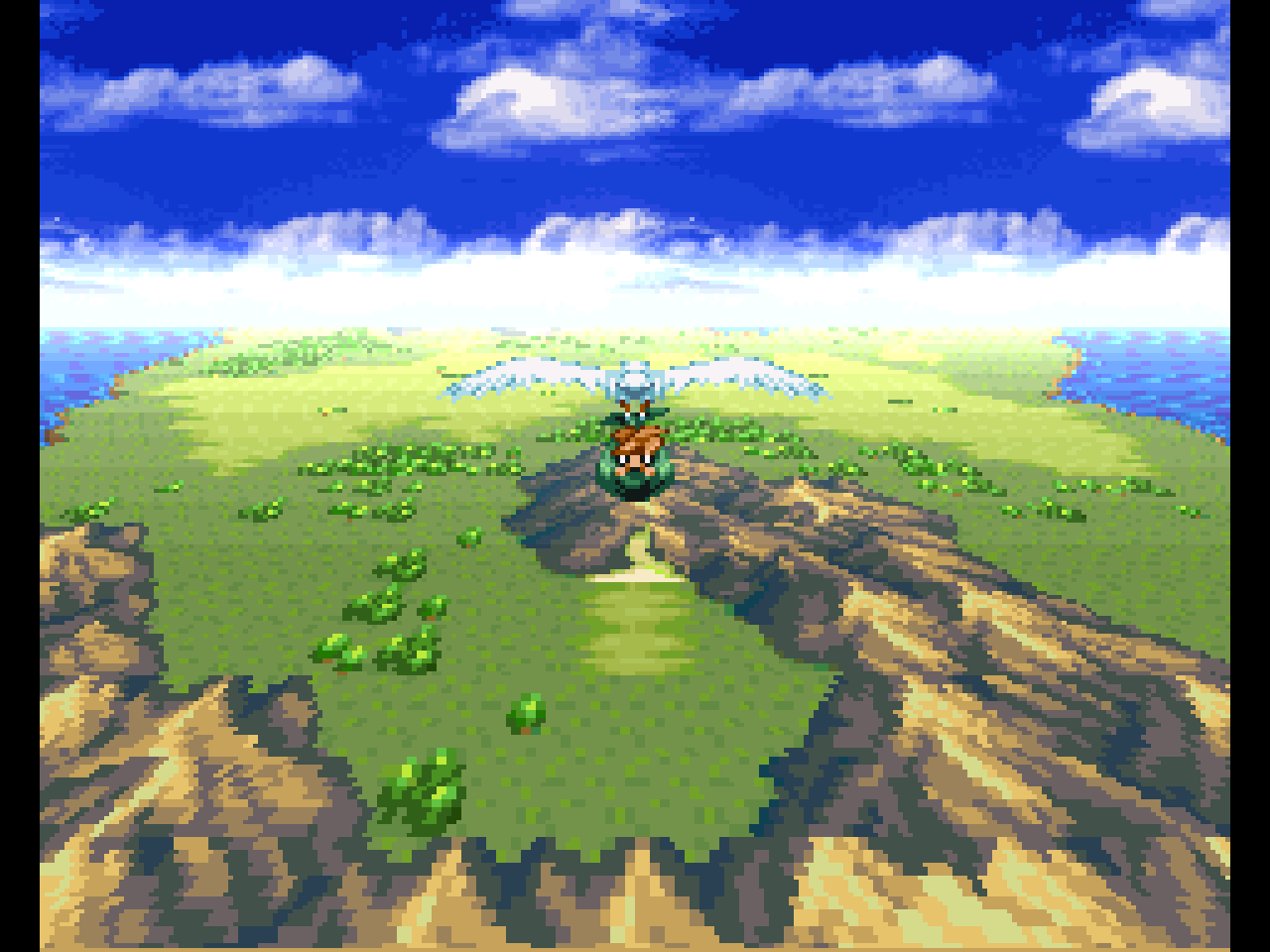