The gull seems pretty happy about the animals returning, but points out the lions' den north, asking us to have an audience with the king of all animals.

The little red bird, west of the gull, is the official fleapicker of the king of all animals.

The tiny monkey, east of the gull, cannot figure out why a human is standing before him, since they haven't woken up yet. 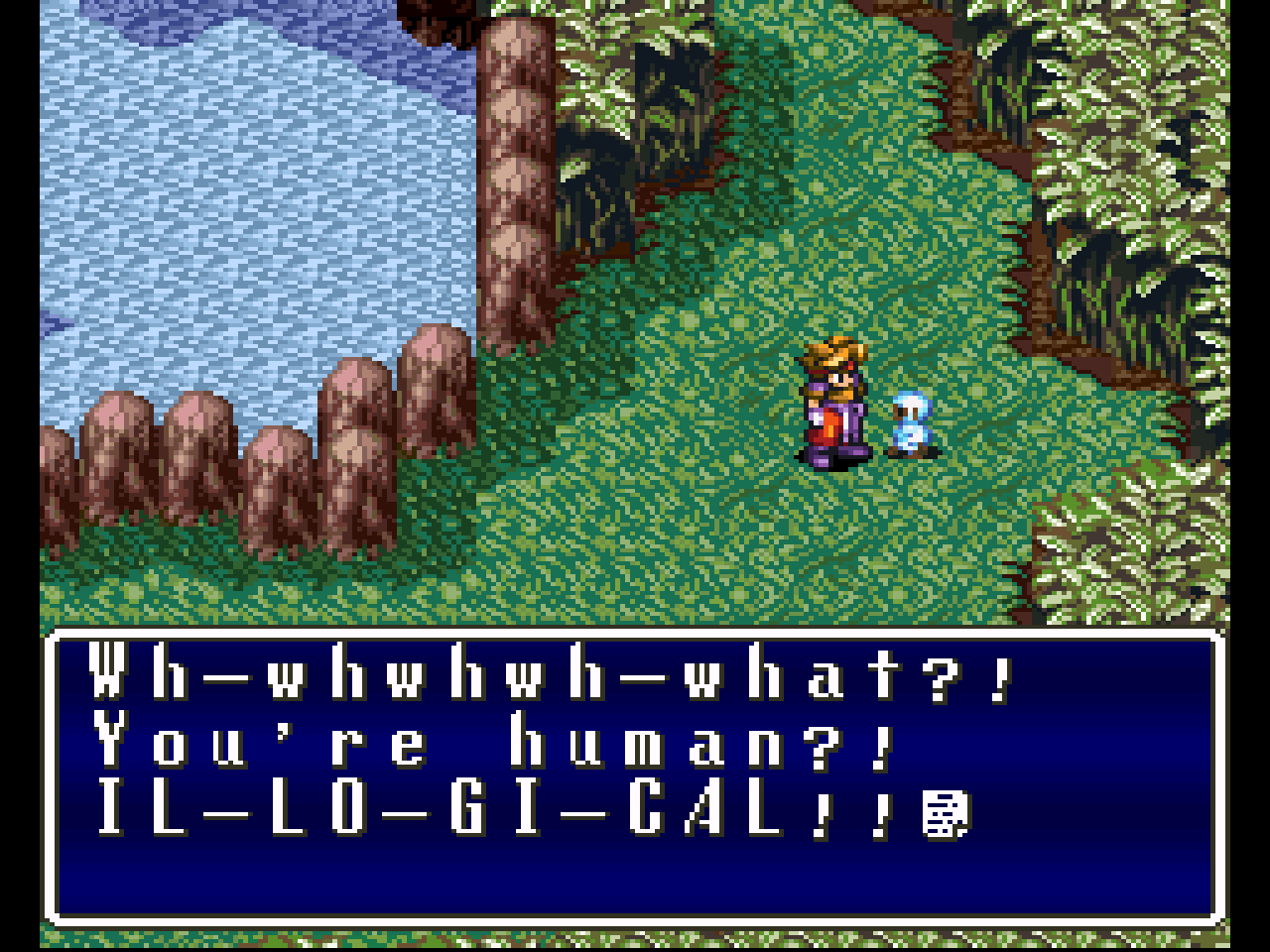 North of the monkey, the bird gives some advice regarding the lions in-game. 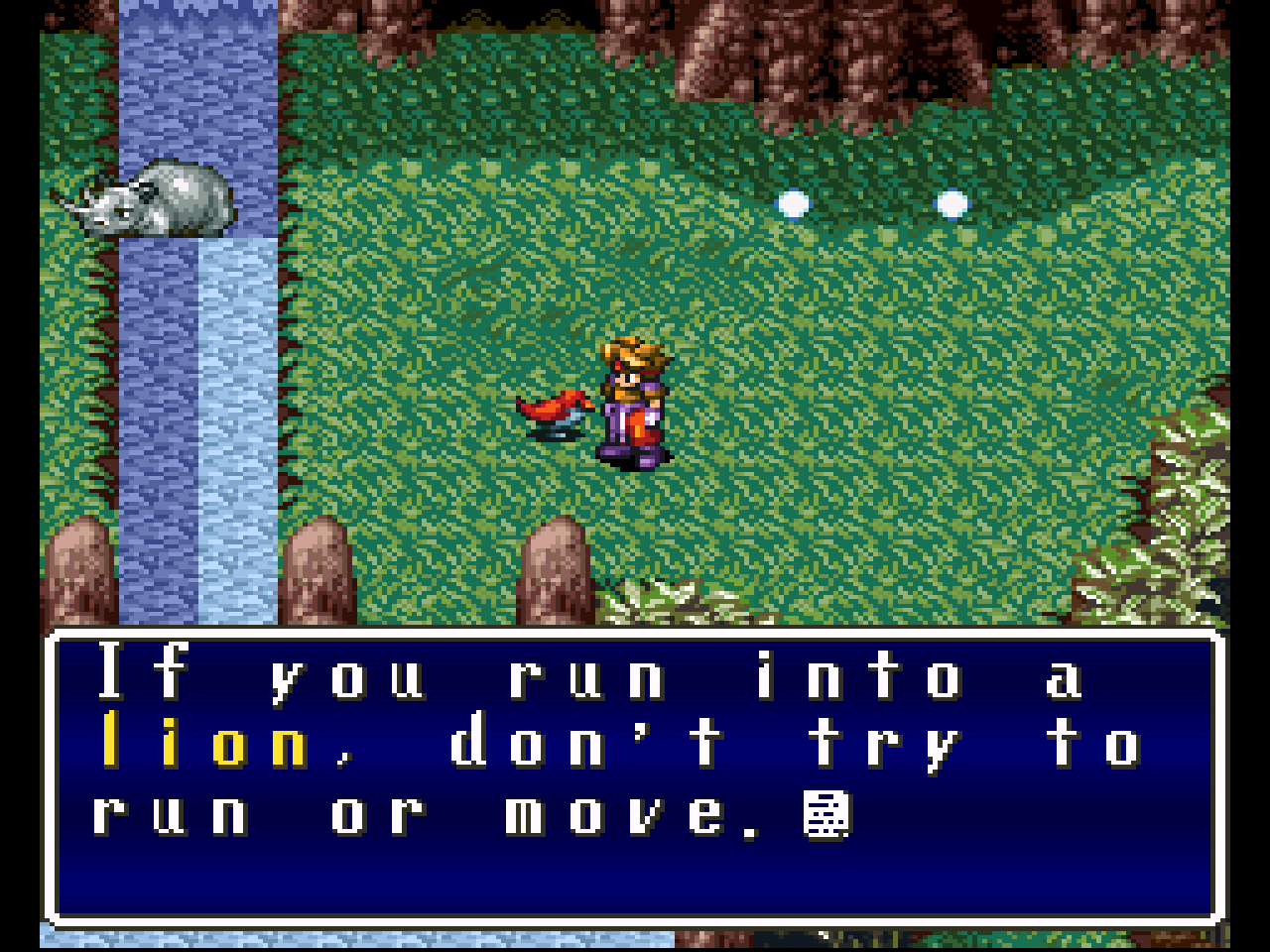 Bird: "Calm your nerves and stand still. Lions will accept you then."

Maybe that's why there's a battle arena west of the lions den entrance?

I buy an extra Grass Pin, and more medium recovery bulbs before speaking to the rhinos.

One rhino warns us not to enter the lions' den, fearful for our safety. How can we proceed?

A turtle tells us to leave him be, in red font.

The rhino in the lake, Simon, can't be talked to.

Plus, we can't return back to the Kingbird's Nest unless we talk to the lions.

...where glowing red eyes glare at us! 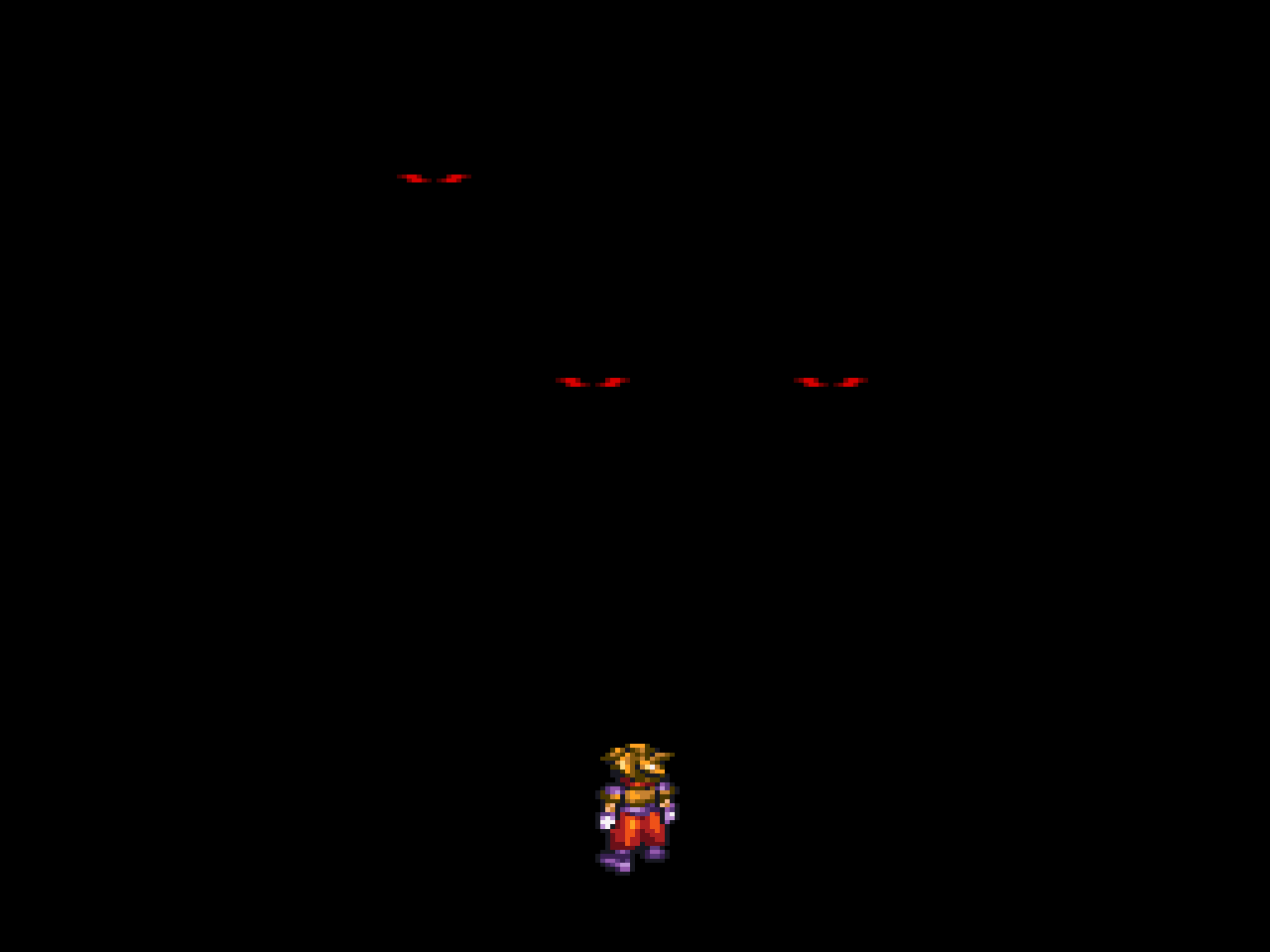 They can't figure out how a human is still alive while all of the humans are still slumbering... 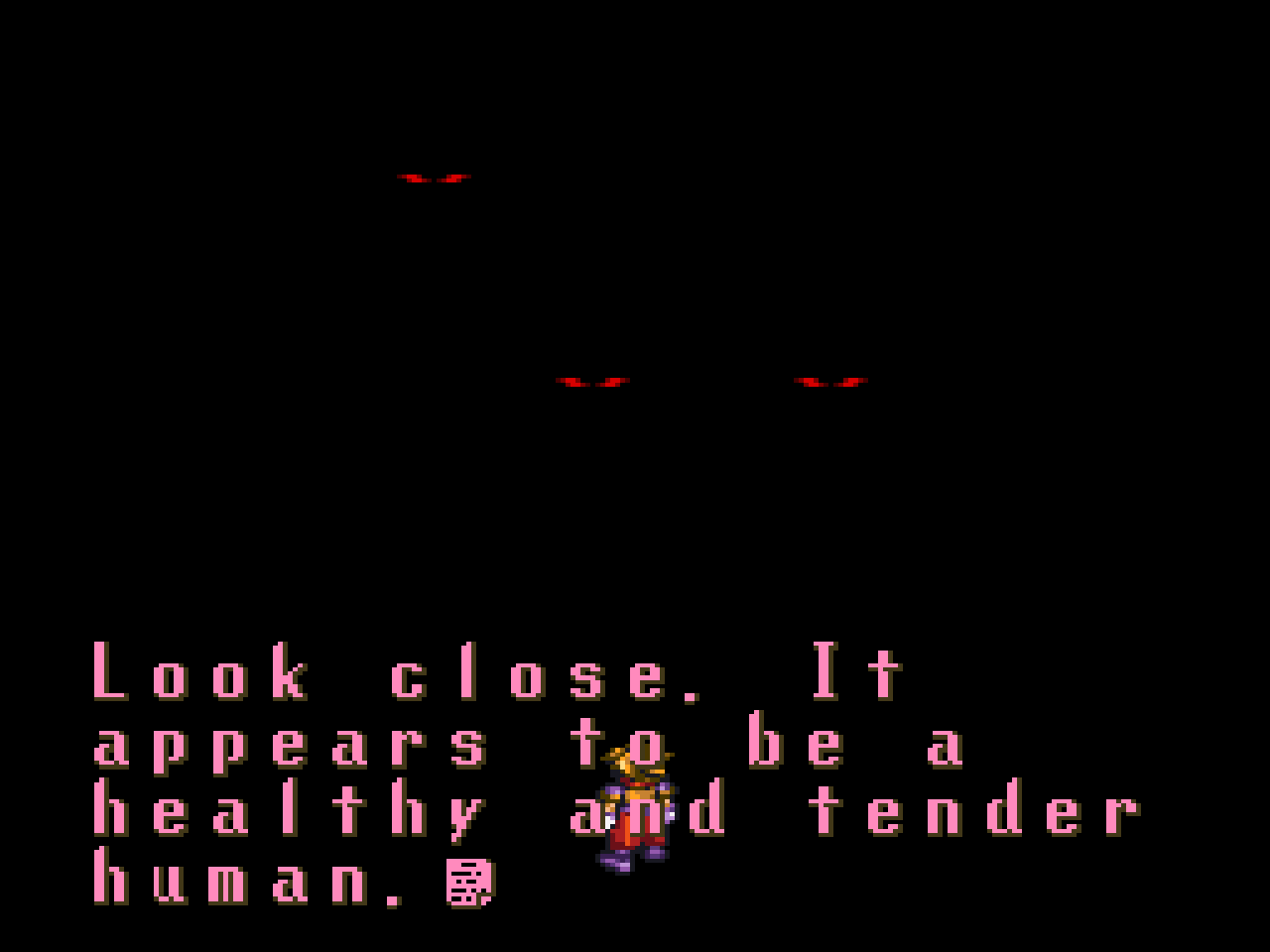 They now decide to "feast." On us? The den begins to light up. 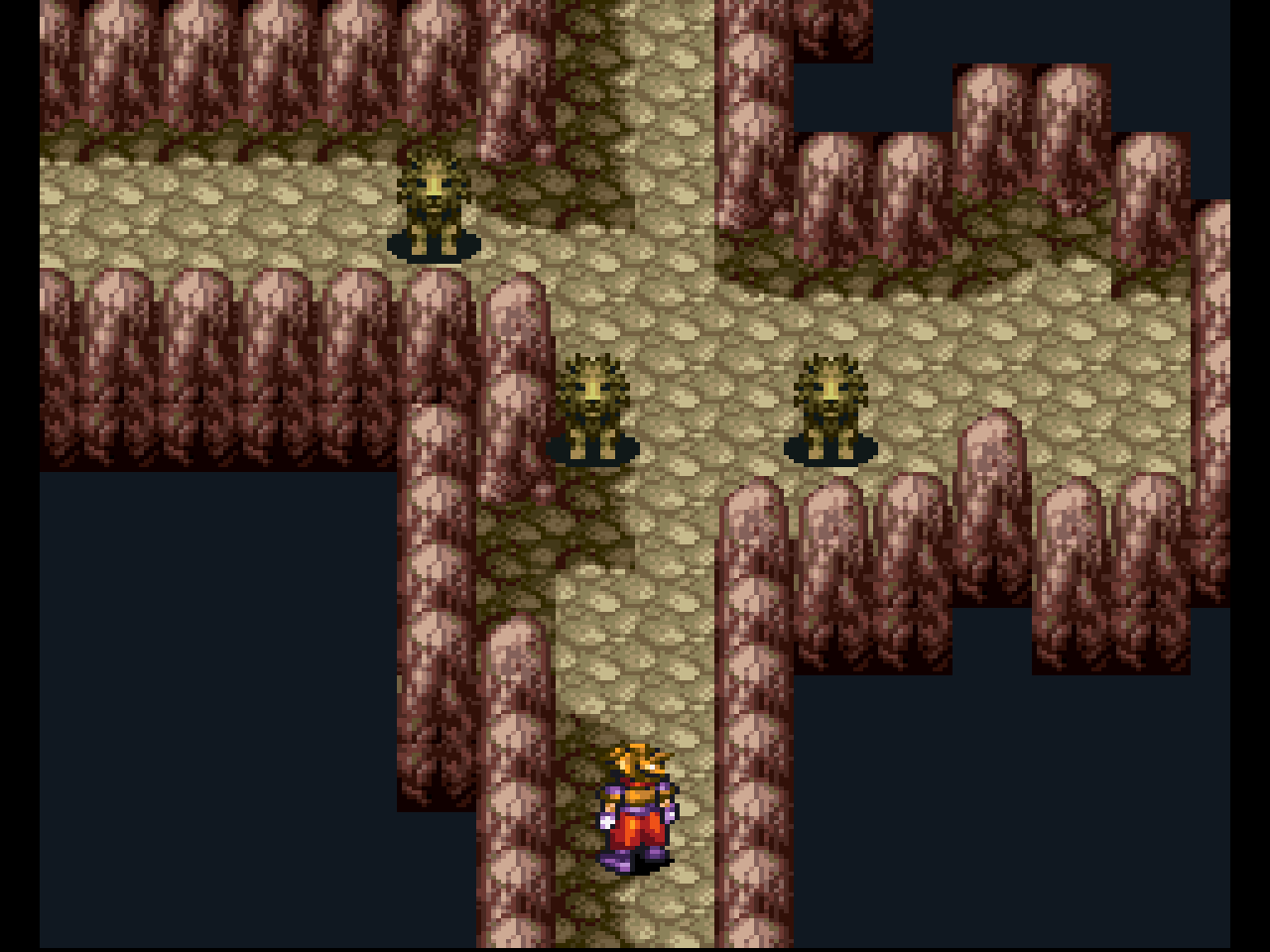 The lions slowly approach us... 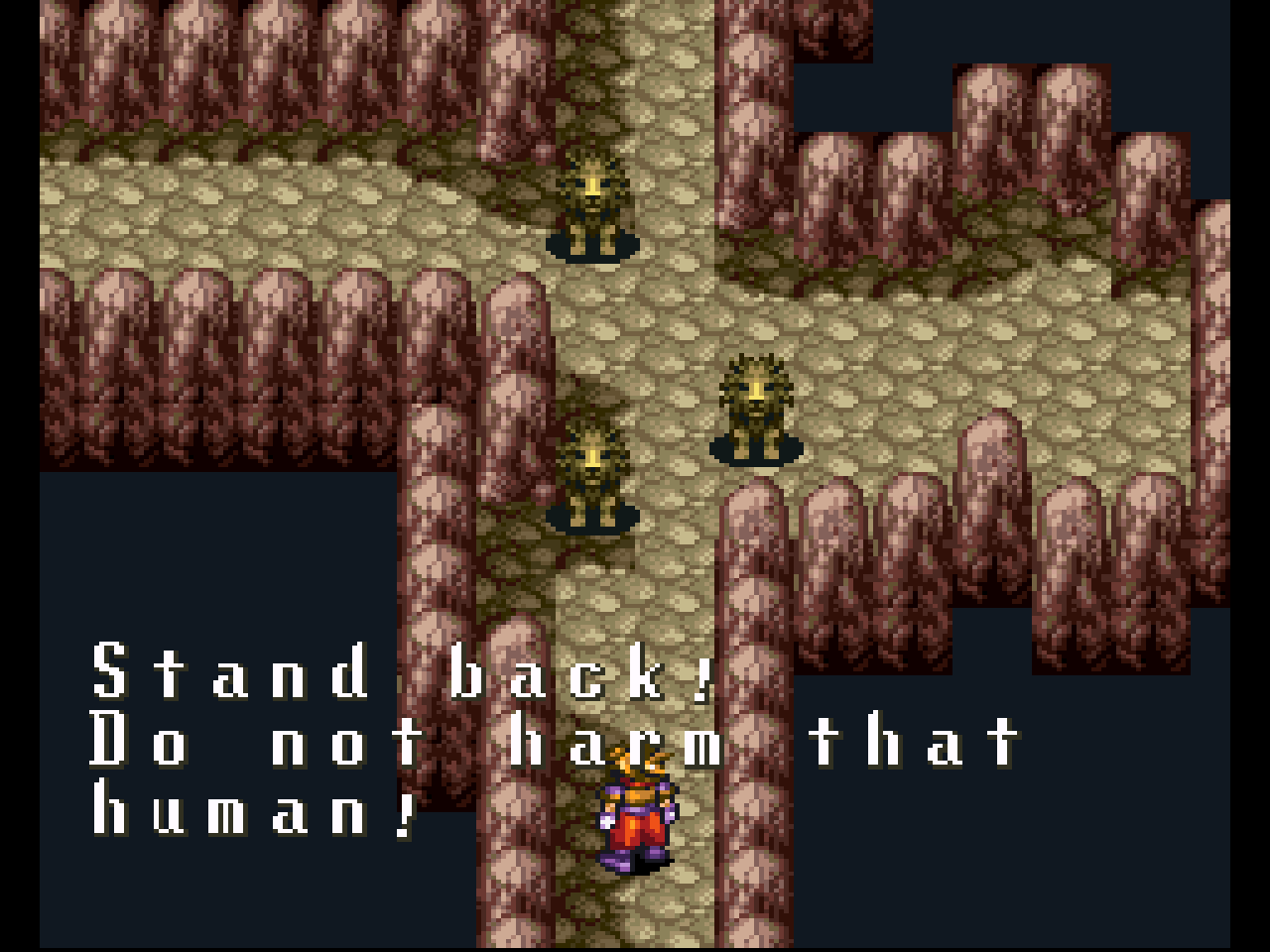 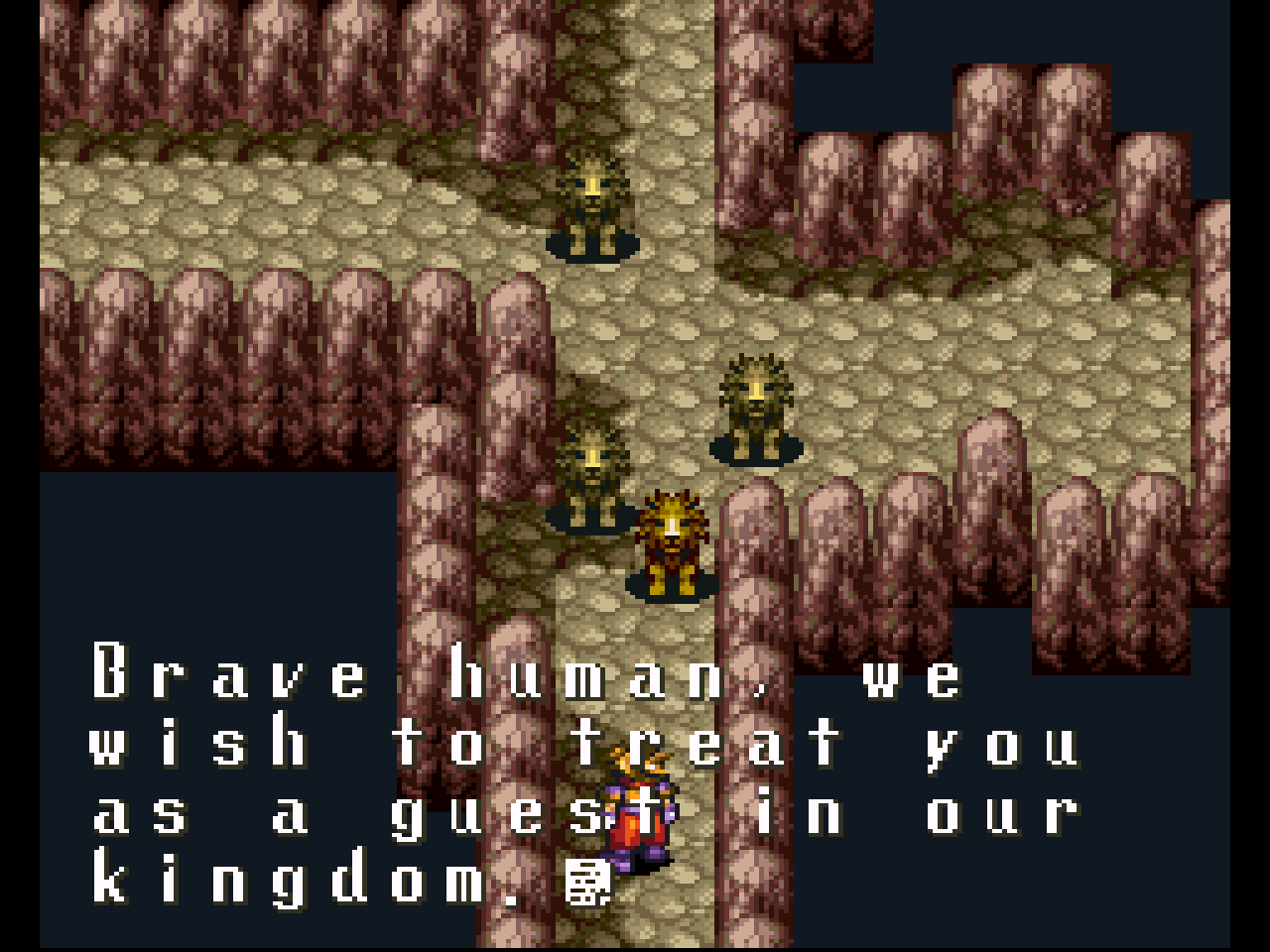 Now why would he want to treat us as guests for? I'm a bit nervous.

I use up two recovery bulbs before going up the stairs...

The first lion I speak to mentions the canyon. 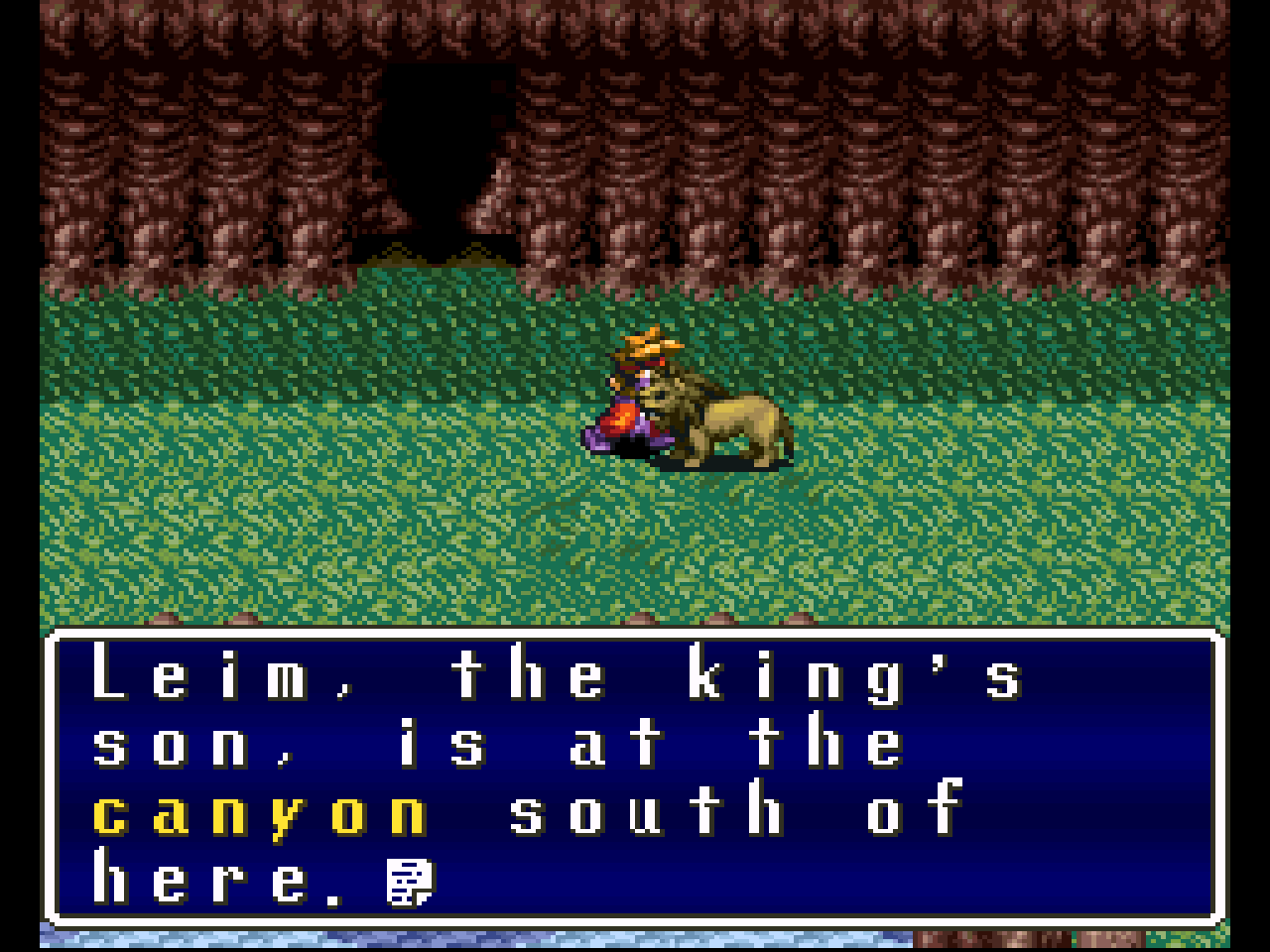 Lion: "The offspring of royalty are tested by being left there alone. Only those cubs returning from the bottom can become the next king."

From a lioness, the monkey we met east of the gull is called Tera, and he's a scholar!

After speaking to a few lions, we talk to the queen of all animals, who asks us to check up on Leim.

I accidentally reset the game!

Tera, the monkey, has a theory to explain to Ark. I ask what it is. 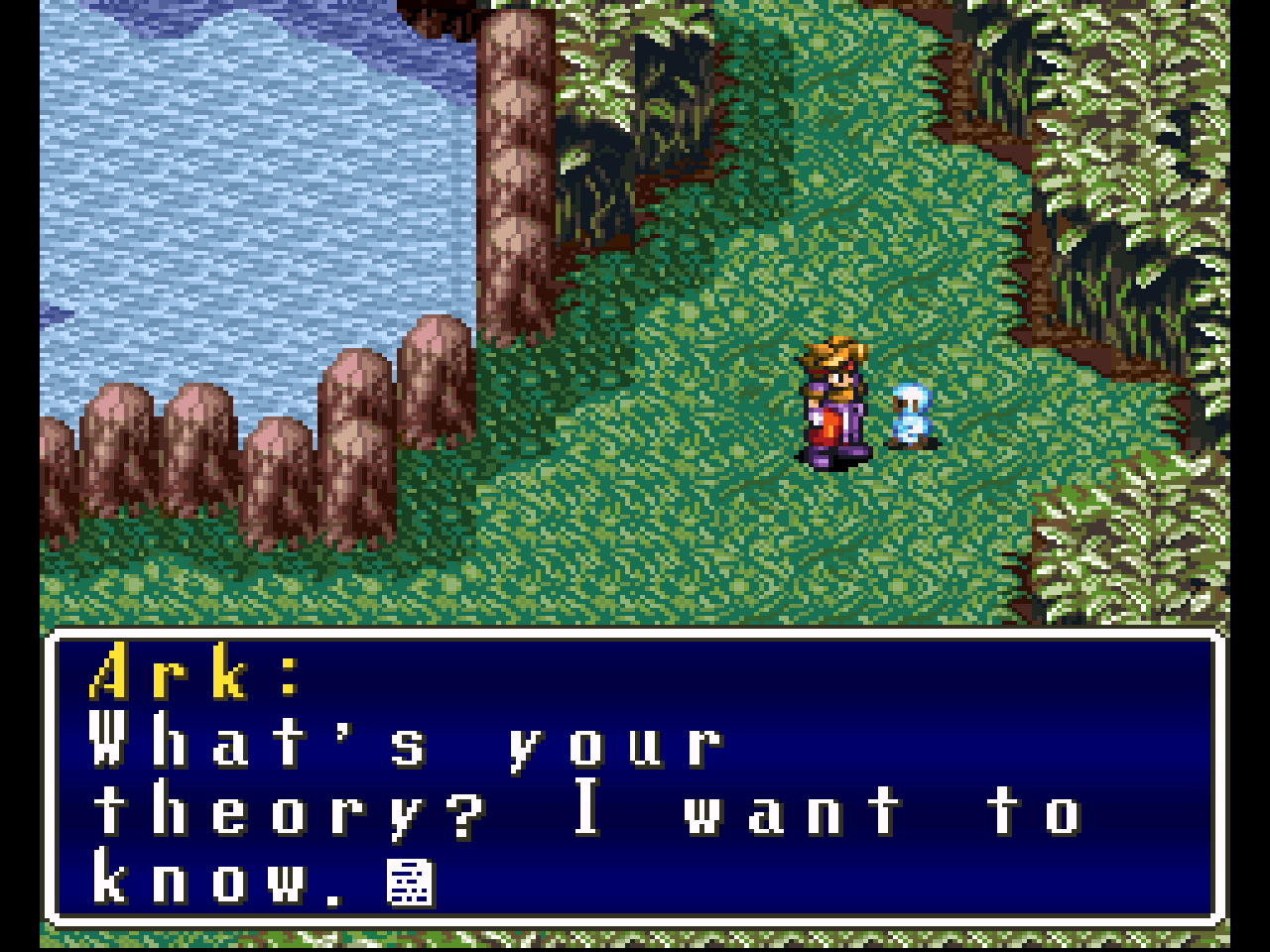 Tera: "In the past, all forms of life existed here. Until the souls of living things were sealed around the world. Human souls lie deep under the snow of mountains in the east." So our next stop is to go there after our business with the lions is done.

We continue the chat with the queen of the lions. 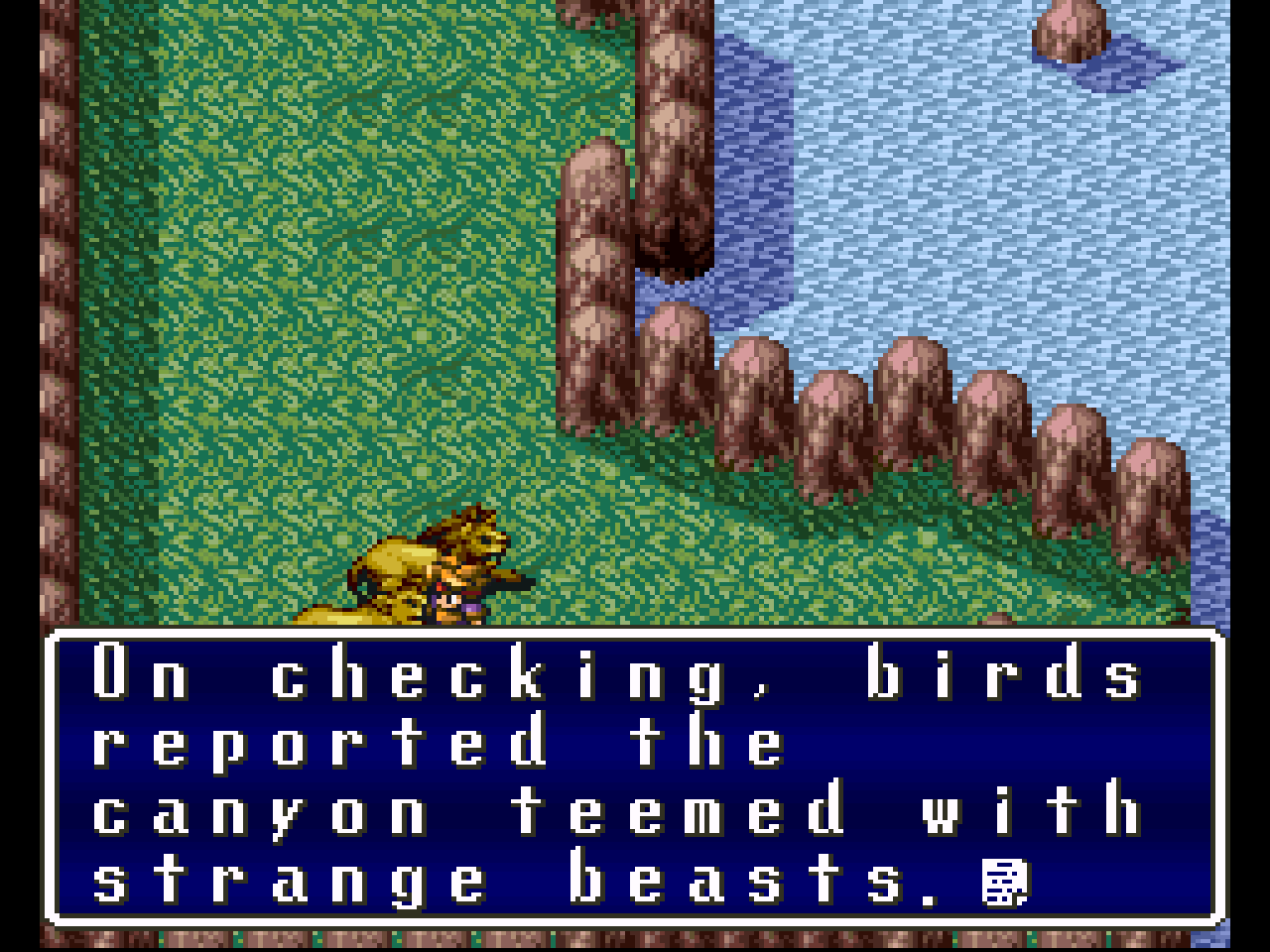 She's worried that Neo is still not calling off the ritual after the dangers she's heard. She asks us to check if Leim is alright. 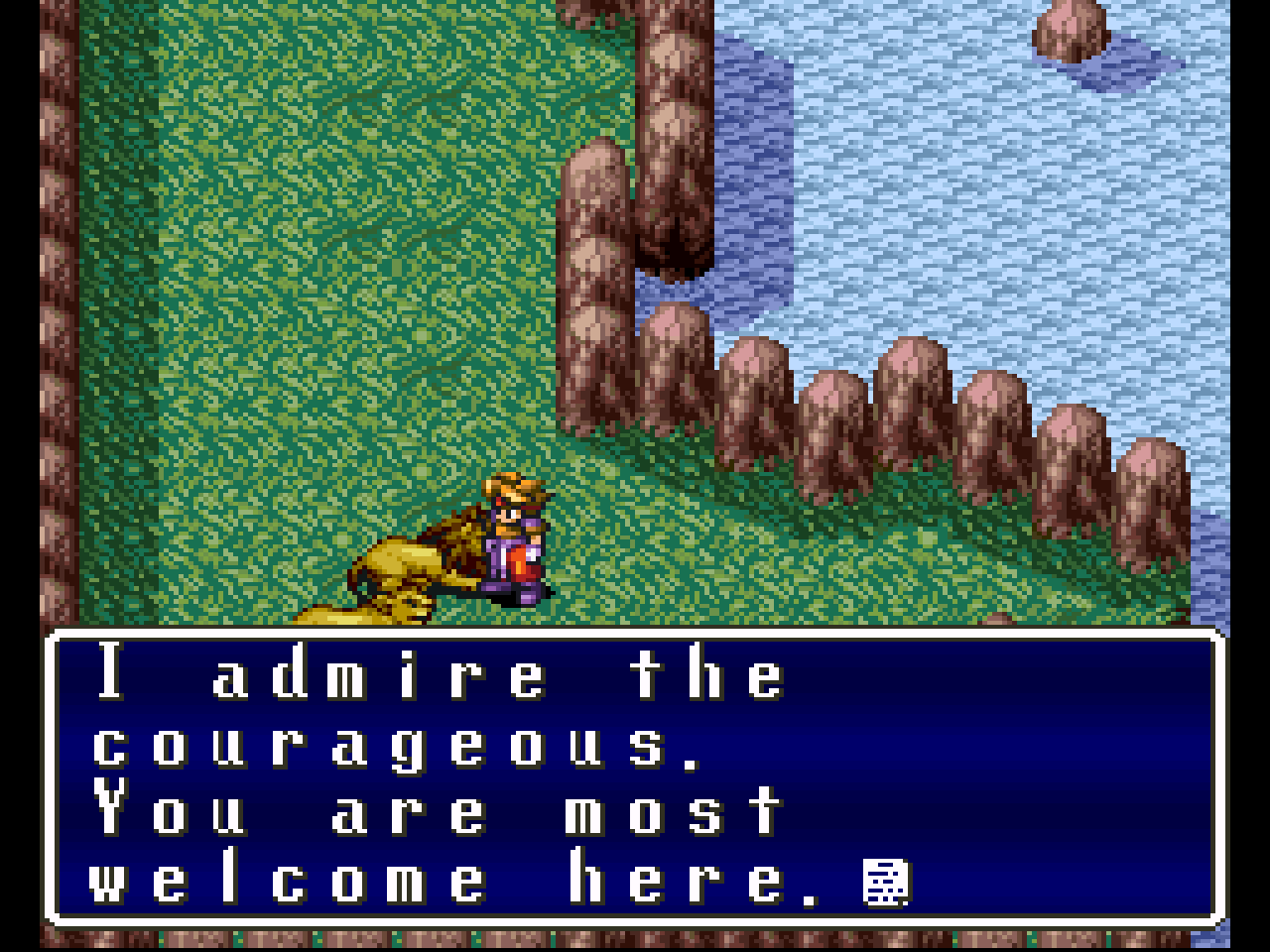 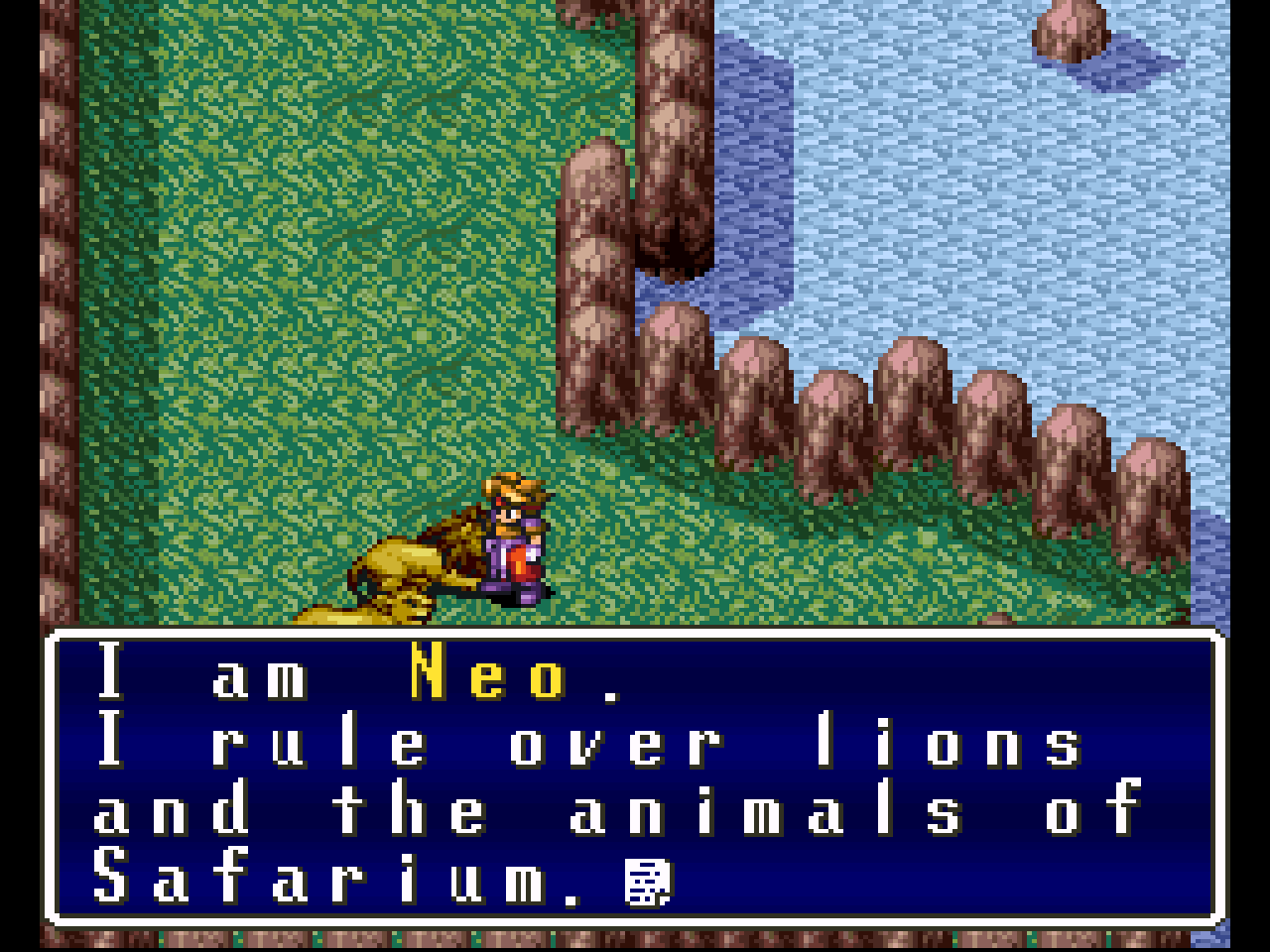 At least he treats us well.

After saving, I take up the queen's request to check up on Leim at the foggy canyon.

The gull now offers us a return trip to the Kingbird's Nest. I say no.

Tera's doubtful that we could make the trip to the canyon, and return from it, mentioning a "mighty river that human[s] cannot cross." 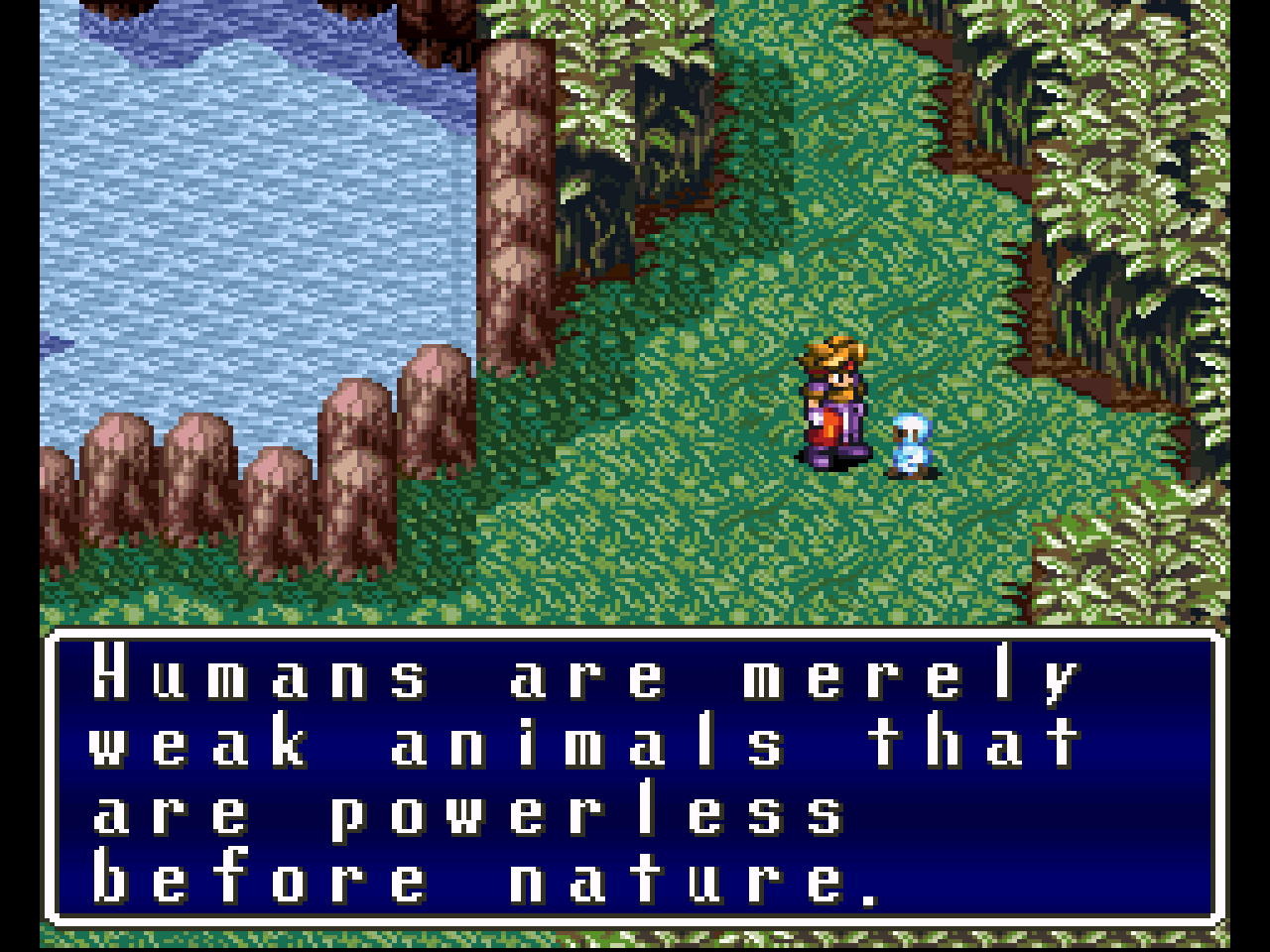